A WISE man once said: “If you build it, they will come.” Okay, it was really a ghost with a penchant for baseball, but they were wise words nonetheless. Queenslander Joel Archard is a case in point, having drawn plenty of folks to his 1927 T coupe. 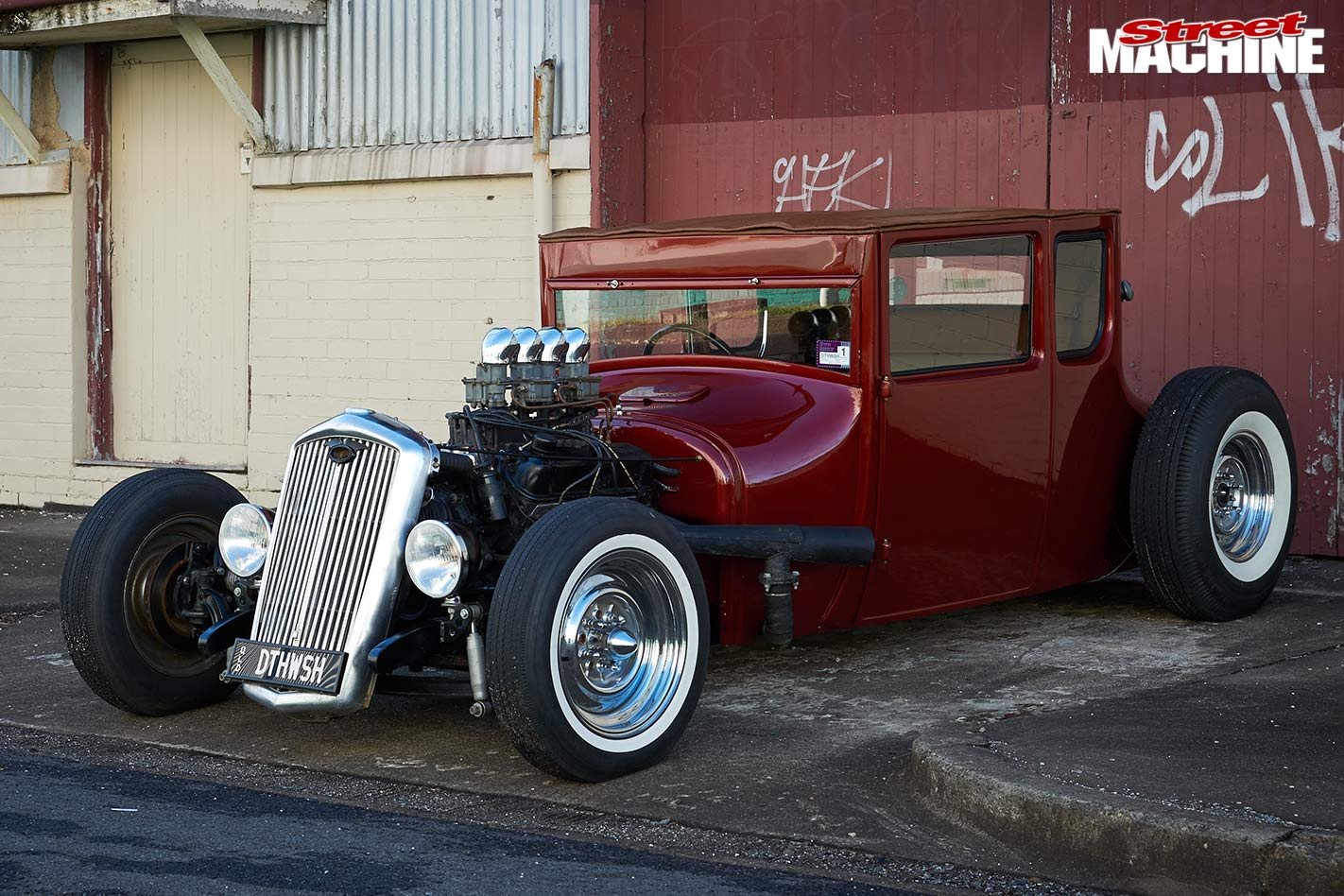 “It’s my first-ever hot rod,” he says. “All I knew from the beginning was that it had to look, sound and drive like a hot rod – not a street rod or rat rod – which pretty much doubled as the build philosophy.”

The project kicked off in 2009 with the purchase of some battered T remains and the desire to build a car from scratch. 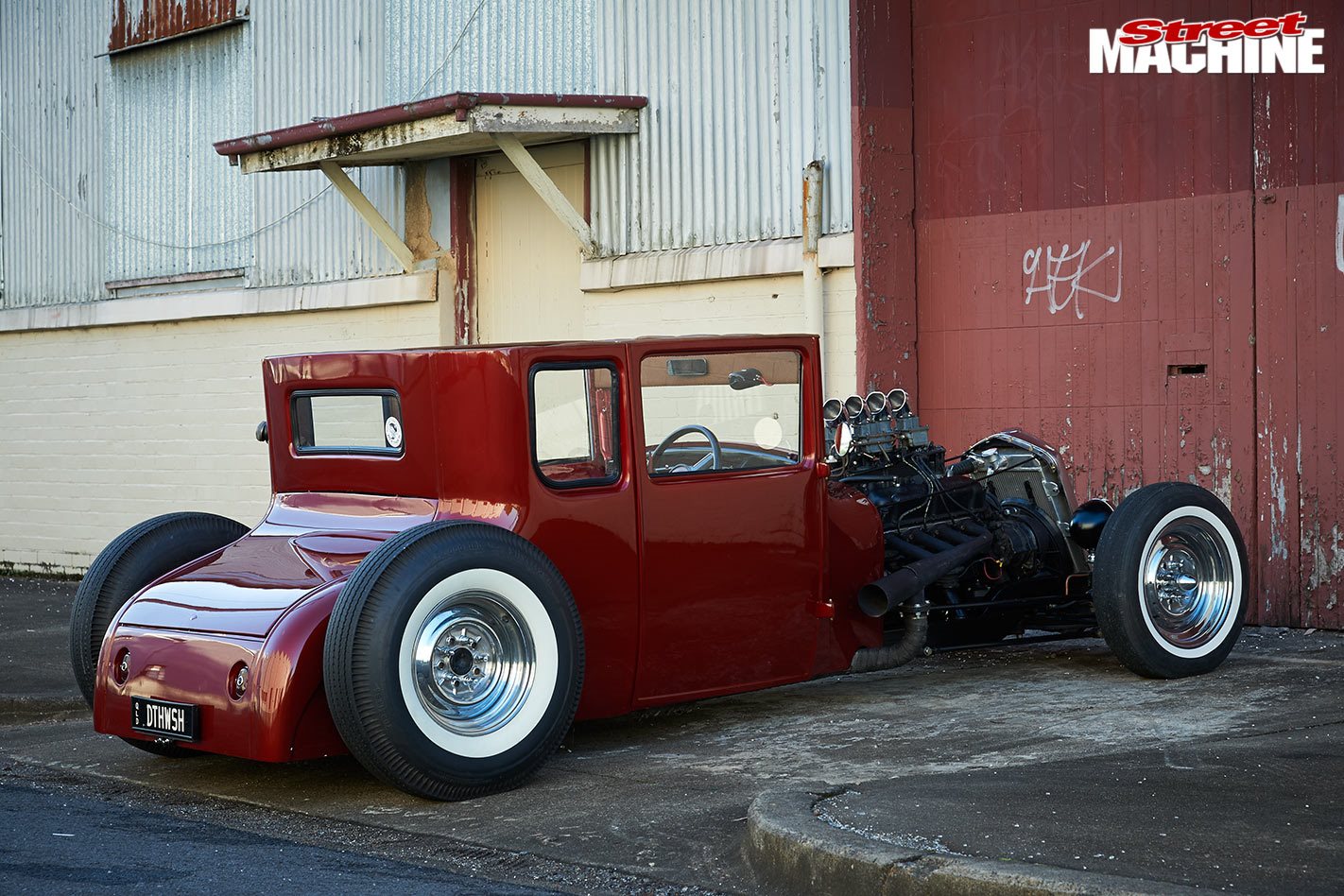 “I picked up a cowl and rear quarters through a mate but it was all pretty hammered; it was just a pile of rusty shit,” Joel says. “I decided early on that I wanted to build everything and not buy anything – trades or freebies only, with a heap of scrounging thrown in.”

With rego always the plan, Joel got busy building a sensible chassis. It is based around 4x2-inch RHS rails that copped a 13-inch step-up to sit the T nice and low. 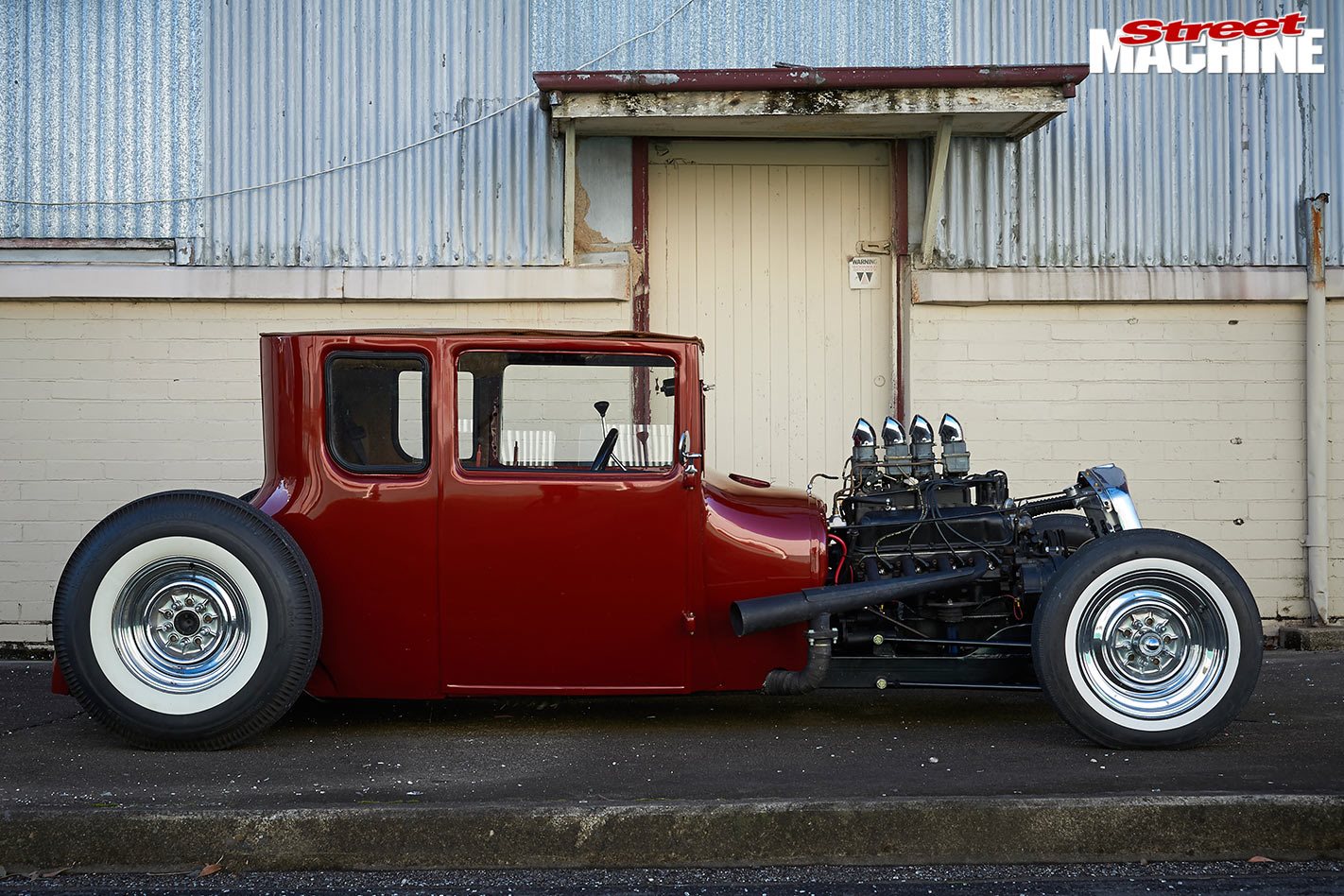 Deathwish cuts a wicked side profile with a 6.5-inch chop, four-inch channel and two-inch section of the body; the latter incorporated the removal of the waistline bead pressing, both as a styling choice and to eliminate extensive rust. Cycle guards are added for street use

A Super Bell dropped axle is located by an owner-made four-bar and Pete & Jake’s shocks, while the rear uses a four-link and Panhard rod to locate an eight-inch Ford diff. Brakes all ’round are Ford discs clamped by Holden and Falcon calipers and activated by a HiAce master cylinder. Chosen for its collapsible design, a Commodore steering column was stripped of its plastics and hooked to an HQ steering box. 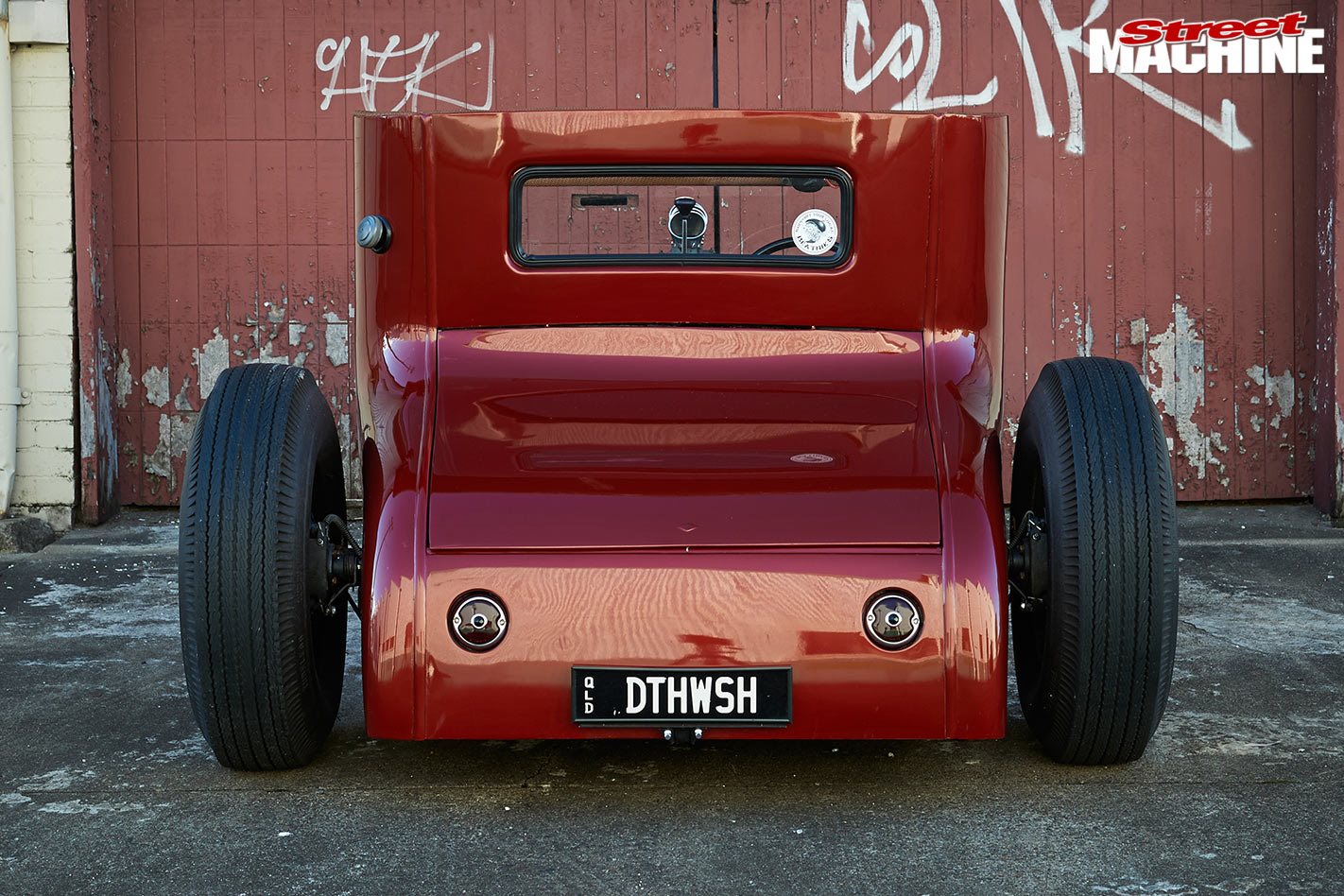 The rear view accentuates the chassis kick and channel depth. The '50 Pontiac tail-lamps were frenched and keep the style of the build era-correct, while the high fuel filler was necessary to squeeze in as much tank capacity as possible

A wrecked Mustang donated its 289 Windsor and C4 to the build and were kept essentially stock, save for some flat-top pistons and a mild street cam, while the quartet of Strombergs are mounted via a custom plenum that bolts directly to a Windsor EFI manifold.

“The intake with its eight-port design really looks the part,” Joel enthuses. “I have a bit of OCD when it comes to symmetry and divisible even numbers, so it had to be four Strombergs to balance the eight ports; three or six just wouldn’t work!” 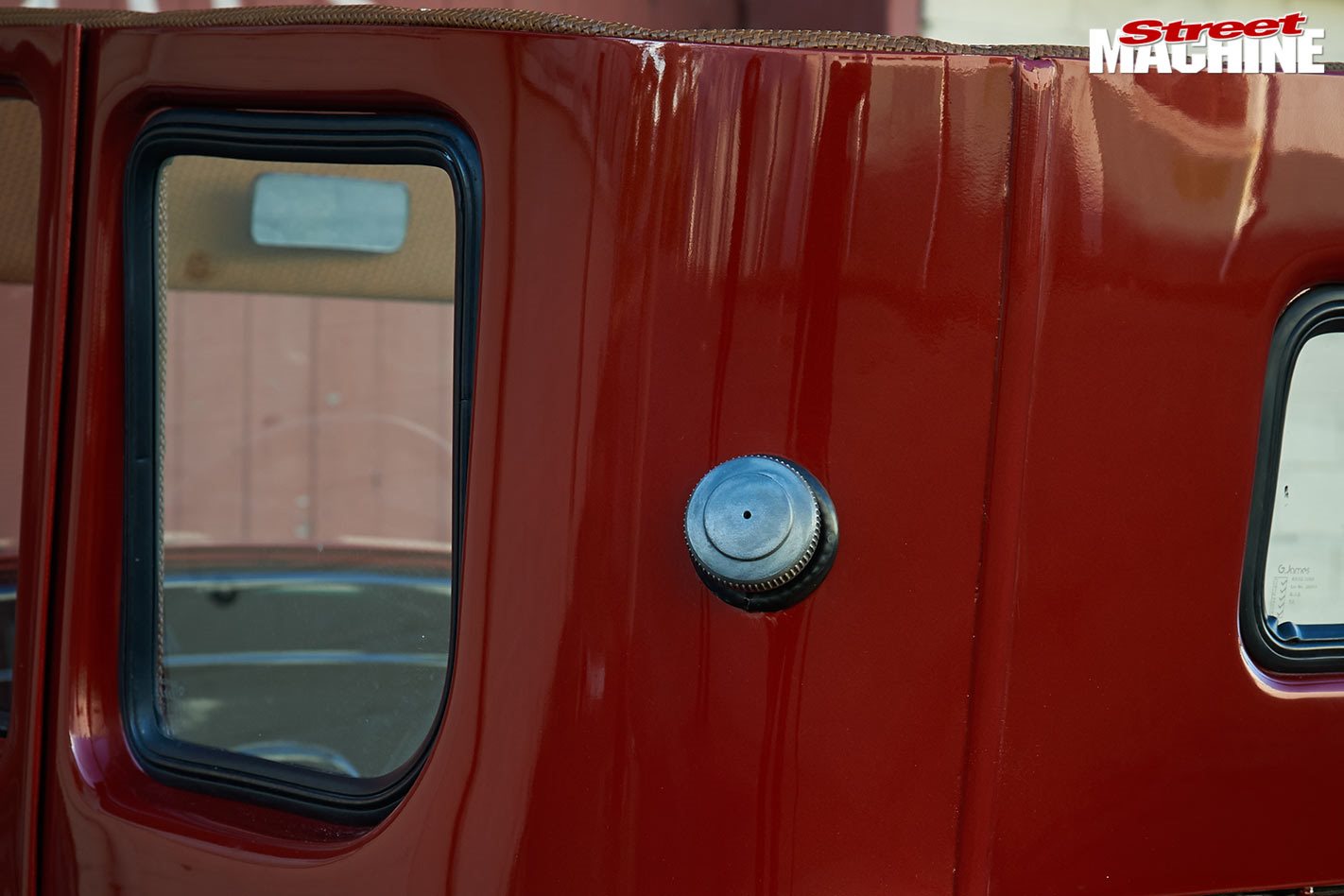 A homemade set of straws handle the exhaust gases, with foot-long hotdogs each side to curb the rasp. Nestled amongst the diff and chassis Tetris-style, a 60-litre custom fuel tank gives Joel something approaching a decent cruising range.

“The chassis was a big learning curve and I spent more time looking at it than actually working on it,” he says. “I definitely annoyed the local TAC guys with plenty of questions, but I just wanted to get it right the first time.” 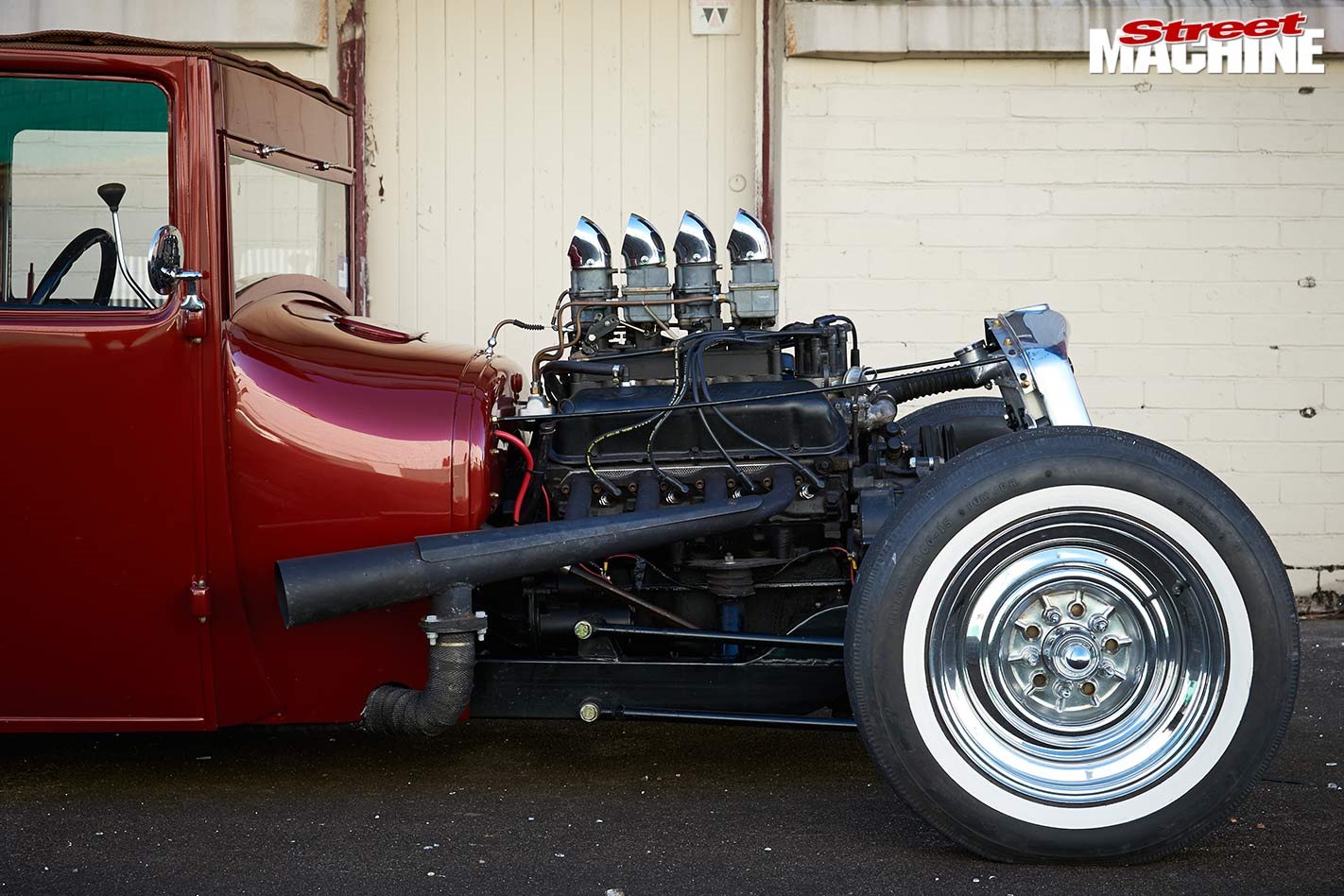 With the chassis sorted, it was time to pile on the body panels and arrange them into some sort of sense. Joel sourced a pair of doors and got busy with the chop and channel. “I took 6½ inches out of the window height and raised the floor four inches,” he says. “The bead pressing around the waistline was totally shot so I toyed with the idea of removing it altogether. I was told it would look shit, but I saw that Keith Weesner sketch Cherry Pie drawn without it and it looked cool, so I thought: ‘Fuck it,’ and started cutting. Next minute, the body is on the floor in random pieces and I’m thinking: ‘What have I done?’”

The overall section comes in at the two-inch mark, the smooth sides tying in perfectly with Joel’s vision for the car. 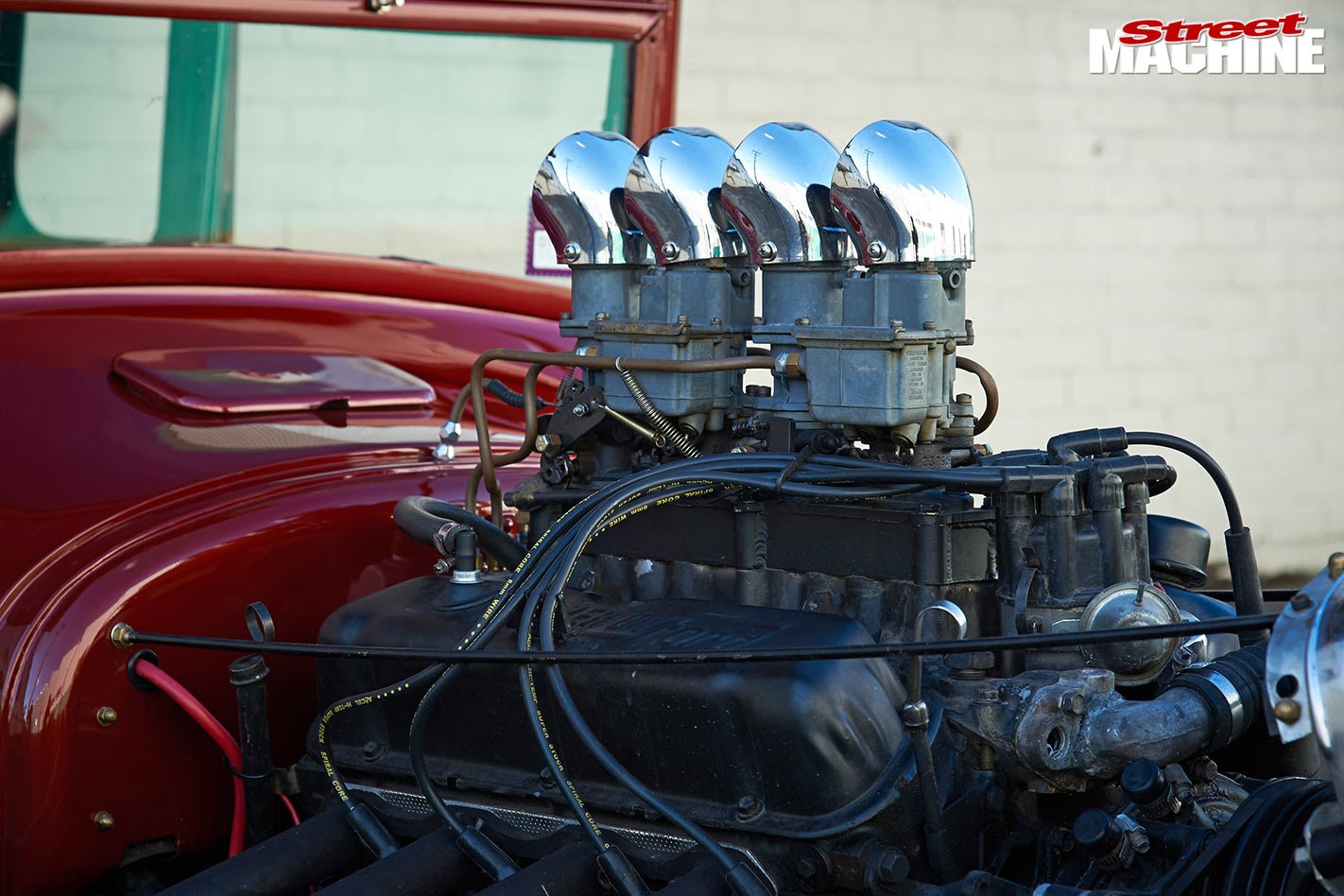 A 289 Windsor and C4 auto were pulled from a wrecked Mustang and kept essentially stock. A quartet of Holden-era Strombergs sit atop a modified EFI intake via a homemade plenum. “I like the eight-port design of the EFI intake and simply blocked the injector holes,” Joel says. “I chose to run with four carbs instead of the usual three or six to match the exhaust ports and keep my need for divisible numbers in check.”

The rear wheelarches were lifted two inches, as both a rust solution and design choice, with all remaining rusted metal cut out and replaced.

The late-40s Wolseley grille is an interesting choice and one that really cements the car’s identity. “I found it at the Toowoomba Swap early on and just knew it was the grille for me; I built the rest of the car around it,” Joel says. 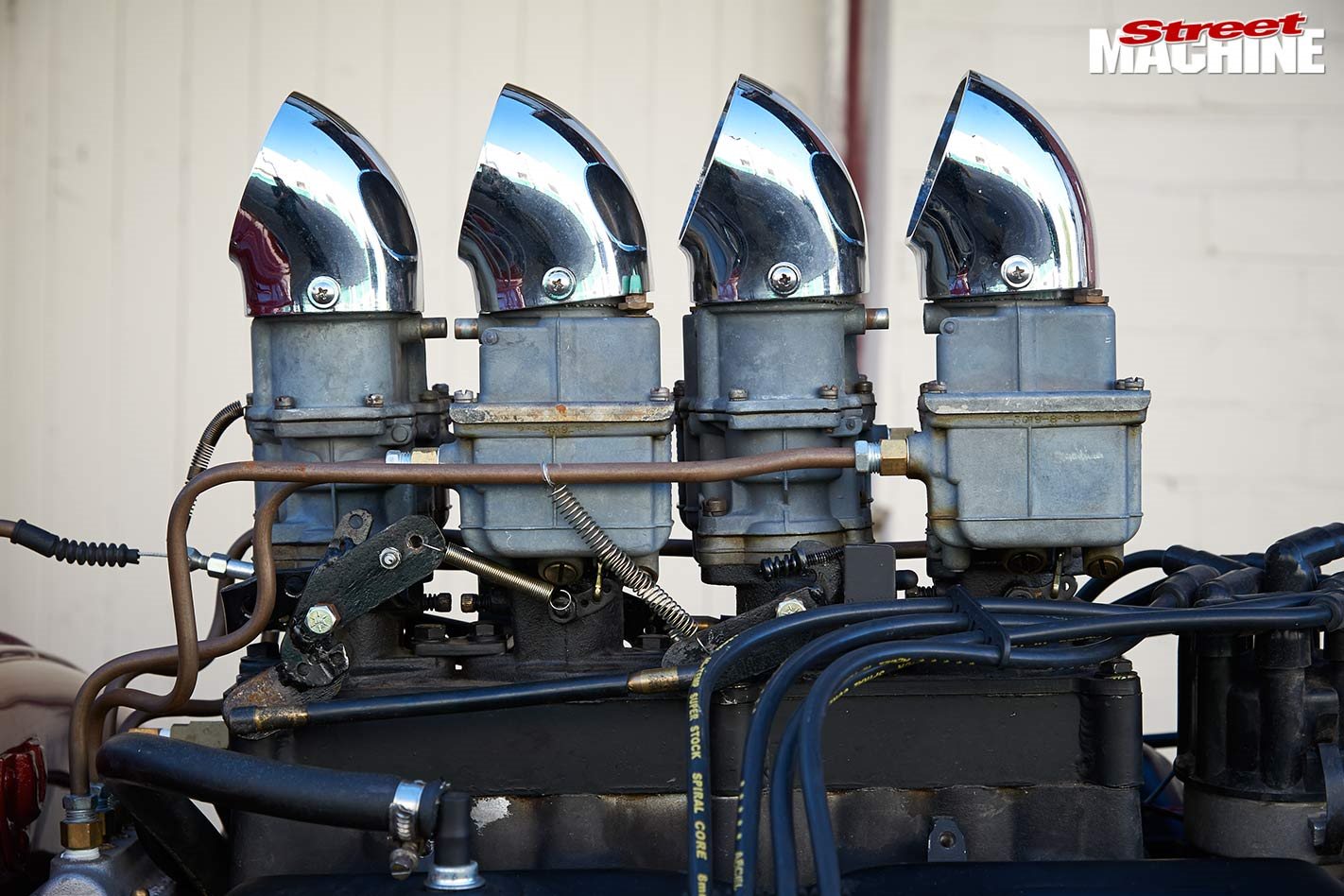 “It was a do-or-die effort to get it running for the 2013 Asphalt Demons dirt drags,” he continues. “I was pulling 3am finishes all week and had a heap of mates and even a couple of randoms pitch in and help. From a bare chassis painted in my backyard, we turned it into a running and driving hot rod.”

Reminiscent of a Hannibal Lecter skin-suit, the patchy bare-metal T cut a heap of passes that day and firmly sealed Joel’s fate. “As I was bouncing and sliding up that track, I thought: ‘This is the best fucking thing I’ve ever done and I’m now building hot rods for the rest of my life!’” 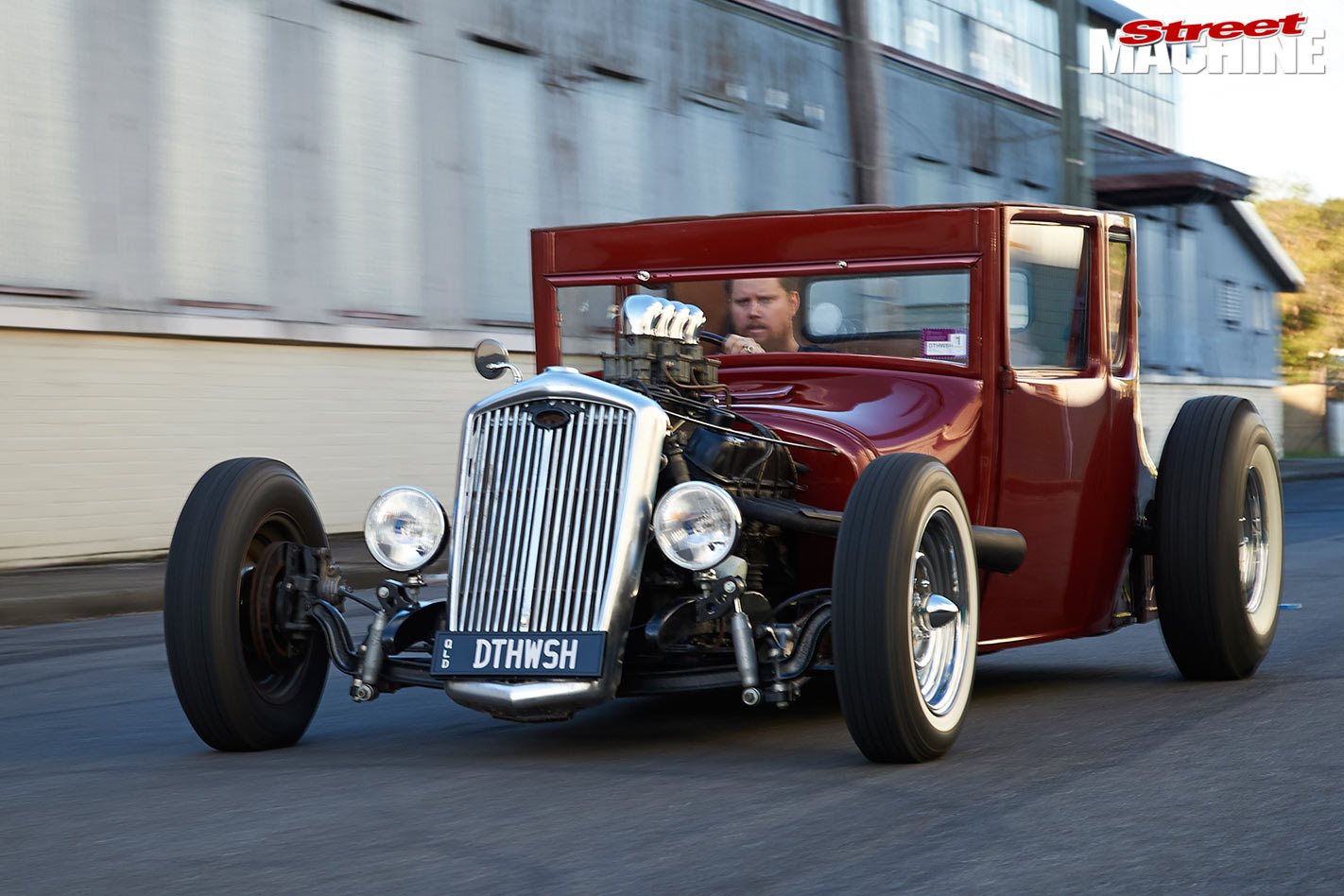 With most of the hard work sorted, the coupe was stripped apart for proper finishing. The bodywork was smoothed before Joel locked in a colour. “I’d spent the build years trying to choose one and finally settled on a shade similar to HOK Root Beer, but more within my budget. I walked into Harts Paints with a picture and said: ‘I want the $300 version of that!’”

Moorooka Smash Repairs laid down the top coats, and Joel is super-stoked with the choice. He even has bragging rights now, with the hue dubbed Deathwish on the Harts colour chart. 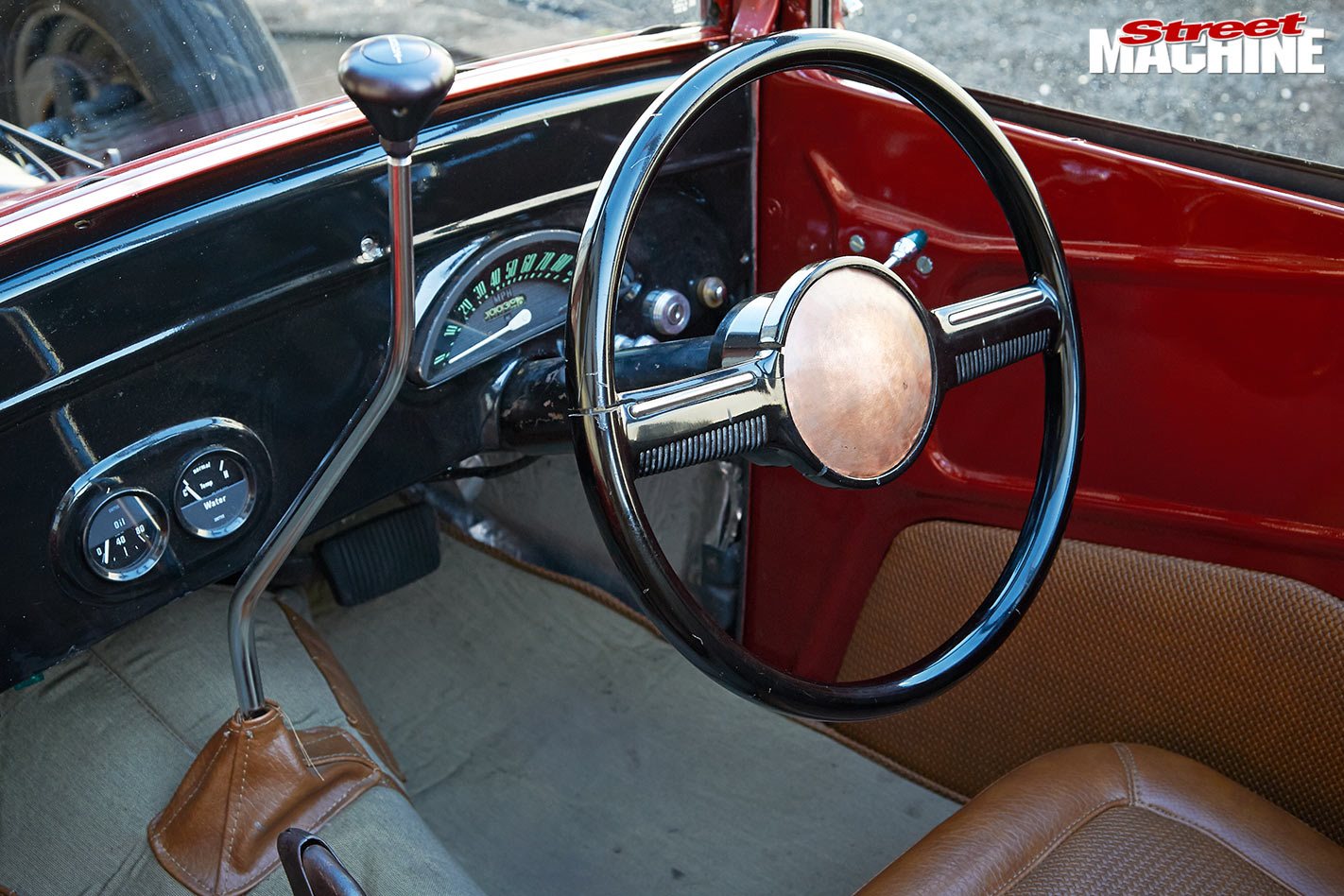 With interior space at a premium, Joel chose Mini Cooper seats retrimmed in brown basket-weave vinyl. “Even Mini seats were still too big and had to be cut down to fit,” he says. The mystery steering wheel and Ford gauge cluster are both swap-meet specials, while a Lokar shifter, 40s truck parkbrake and Smiths gauges add to the old-school visuals

Ah yes, the name. Like all cool builds looking for identity and longevity, Joel knew his needed just the right moniker. “We tossed around a heap of ideas; some were okay but others sounded too corny or were just plain shit,” he recalls. “Deathwish was one of the frontrunners, and when my wife Danielle bought me the plates for my birthday it sealed the deal.”

With Joel on the home stretch, the interior was knocked together, based around narrowed 60s Mini Cooper seats and trimmed in brown basket-weave vinyl by good mate Jason Toomey. The main cluster is Pommy Ford, while the accessory gauges are Smiths. A Lokar shifter selects the gears, while the steering wheel is another swap-meet score, detailed to suit. 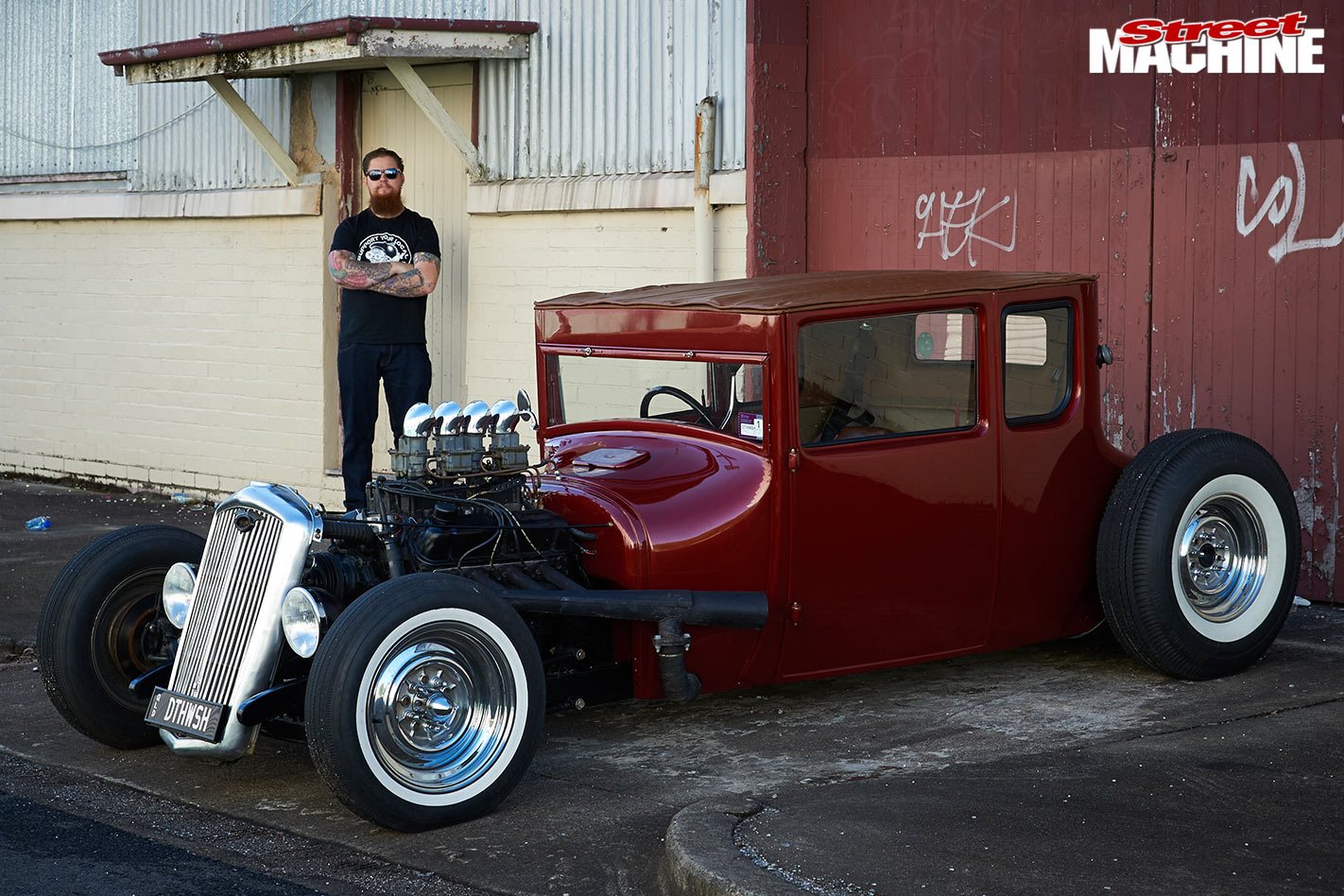 Blur your eyes and you're looking at a pic lifted straight from the 60s. A '49 Wolseley grille was a swap-meet find and became the nerve centre around which the car evolved. Chrome steelies and whitewalls both complement and contrast with the root beer-inspred paint

Final TAC approval was sorted over the 2013 Christmas break, with rego achieved on the first business day of this year. “I drive it rain, hail or shine and probably don’t take as good care of it as I should,” Joel happily admits. “It’s built to be driven but scores a clean every now and then. I love it.”

The build has left an indelible impression on Joel, so much so that he’s started his own hot rod and fabrication business at Nerang on the Gold Coast. The appropriately named Deathwish Inc. will be up and running by the time you read this, so if you like Joel’s moves, give him a bell and see if he can breathe some life into a project of your own. 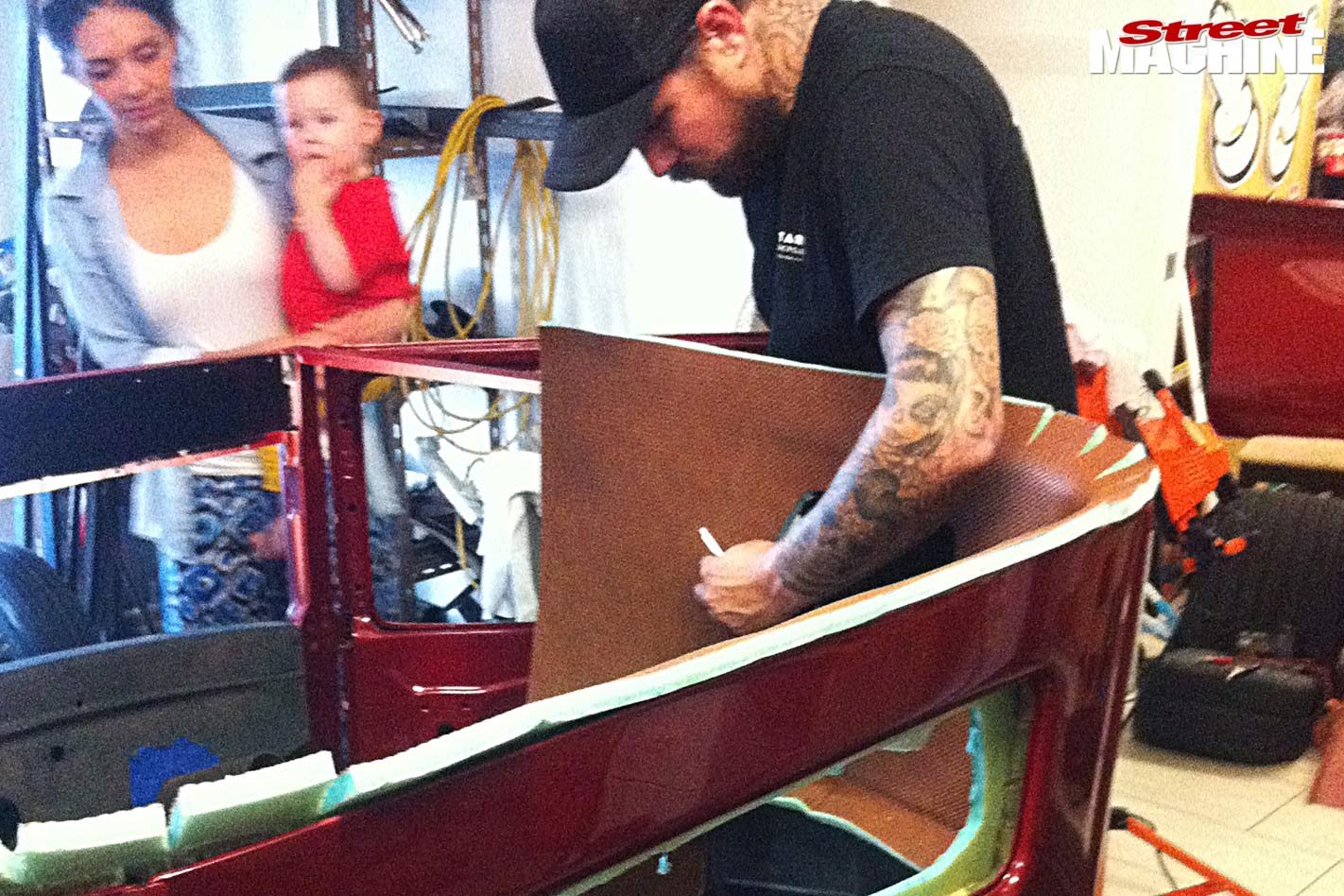