I FIRST clapped eyes on Tracy and Michael Ahrens’ T roadster in Adelaide in 2001. It’s a moment I’ll never forget. I’d just had my first taste of massaman beef, and, while the Model T sitting outside the Thai restaurant wasn’t the first traditional-style hot rod I’d seen in the flesh, it made as much impact on me as the curry did. The car was simple, approachable, and, above all, looked like fun. Michael confided in me that the roadster was “built out of junk”. 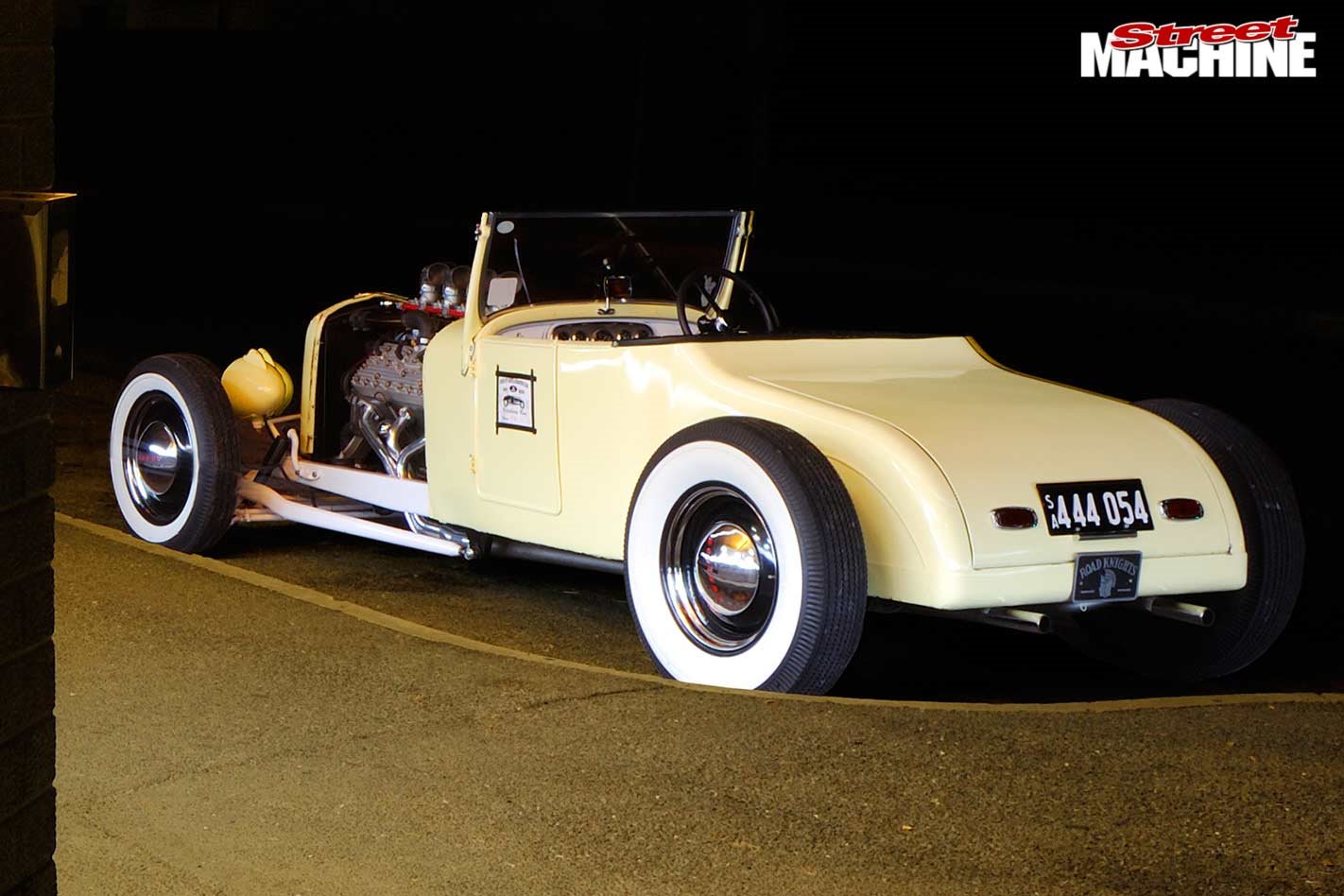 By the time I met the roadster it had already been through a couple of guises. First constructed from the remains of a ’27 cowl and doors, Michael fabricated the back half of the car from sheet metal and square tube, with a whole lot of welding, grinding and pie-cutting needed to make it resemble a car. Channelled over a Model A chassis and powered by a flathead V8, the roadster was first decked out in a blue and white race-inspired paint scheme. 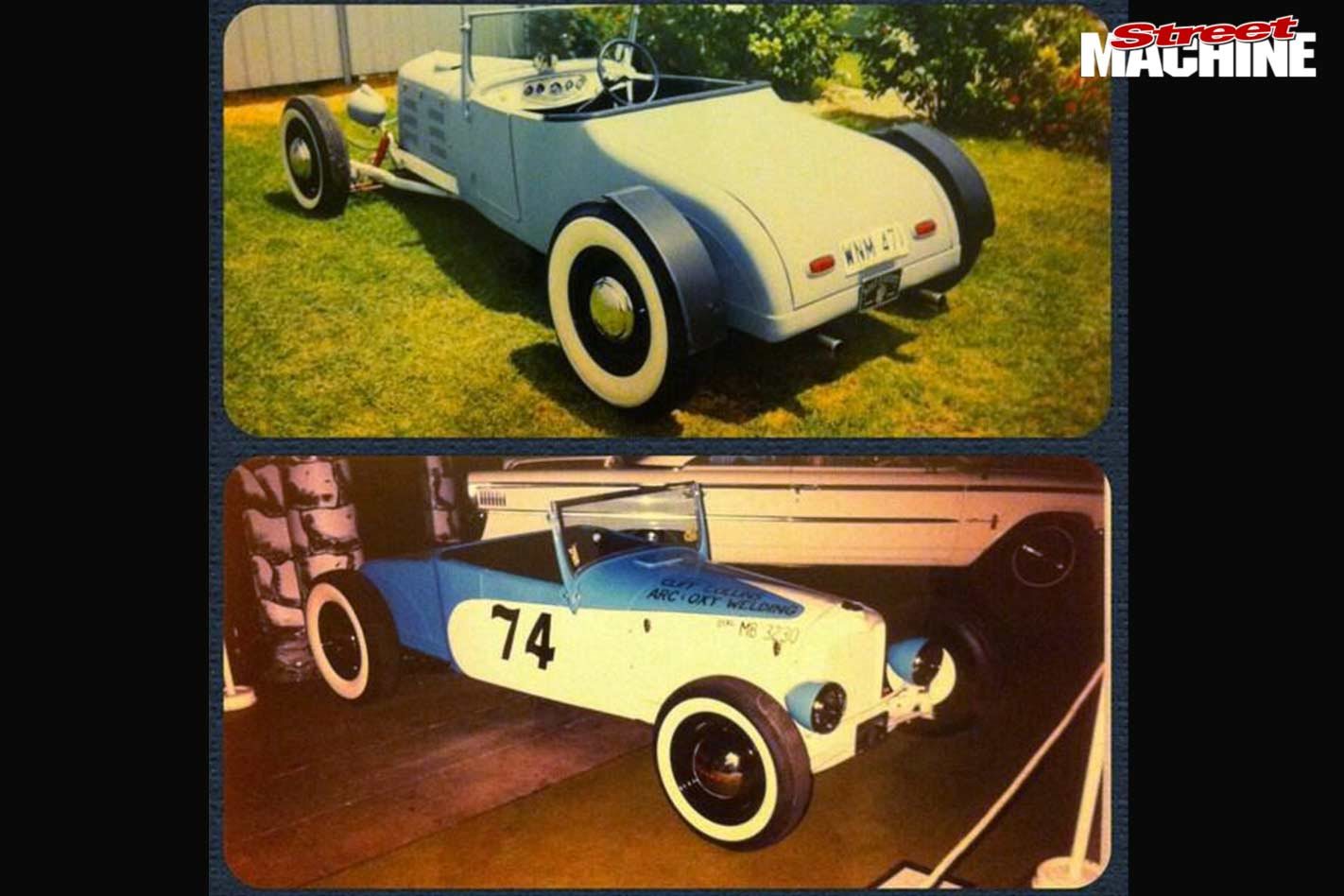 While hardly a hulking beast, the roadster cuts a more muscular figure than it did in its previous guises. Aside from the new motor and the lack of a hood, the main visual change is the Mercury caps

“Back then I was working at Rod Tech,” Michael says. “Rod Collins was my boss, but his older brothers Cliff and Rob were veterans of Rowley Park Speedway. They raced a shortened Hudson Terraplane, number 72, as well as this wild thing they built on their own chassis over a gutted FJ body, powered by an OHV V8. That one was number 73. 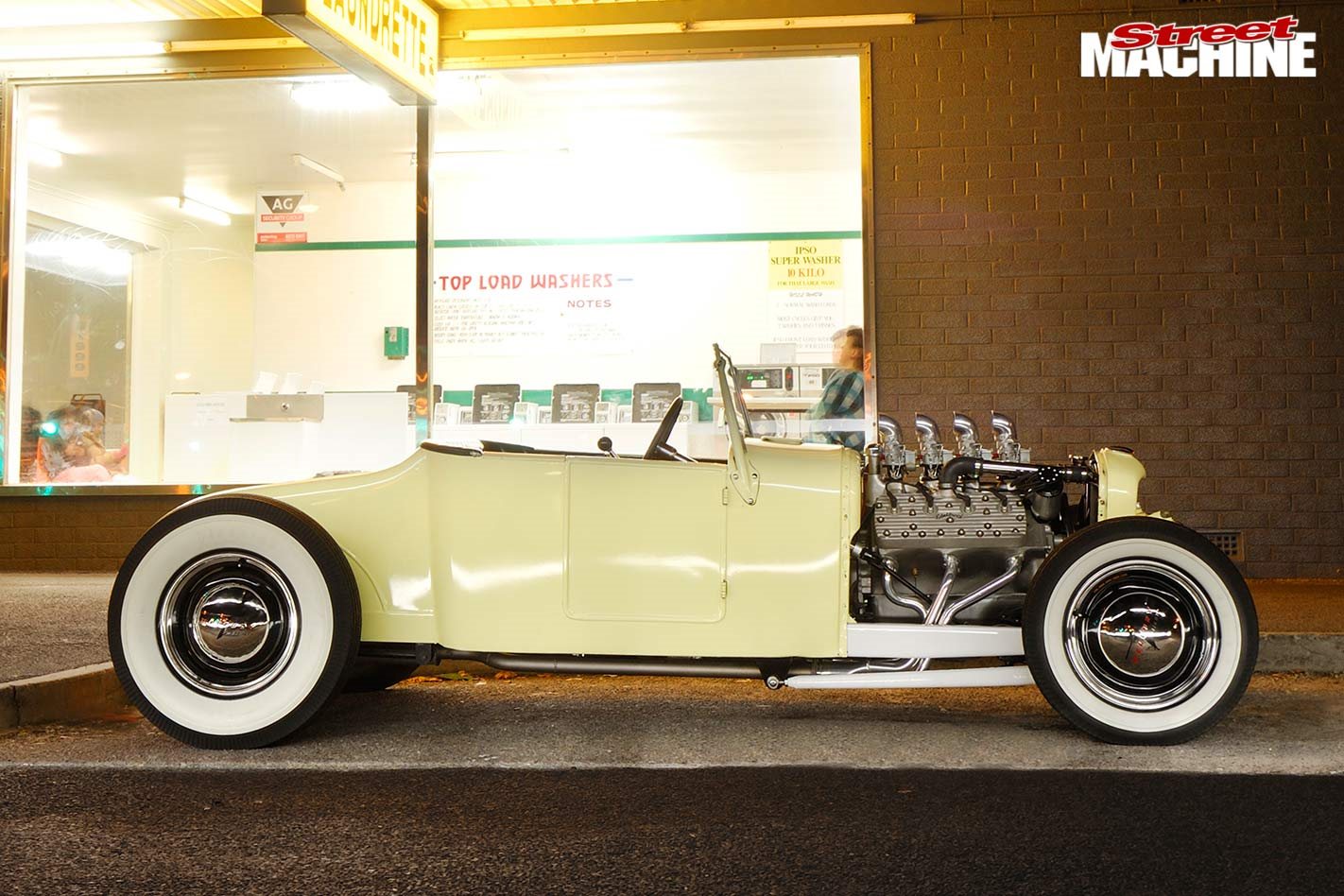 “The guys helped me with some stuff on the roadster, so it got number 74. It even had ‘Cliff Collins Arc & Oxy Welding’ lettering on it, as well as the shop’s original ‘MB3230’ phone number.”

While the race-style look was cool, Michael’s paint application skills were still in development and when it started to look tatty, the blue and white it was replaced by a weekend job in grey. That looked pretty sharp too, but had a scary side-effect. “The grey was like urban camouflage,” he says. “People just couldn’t see the car and were pulling out in front of us.” 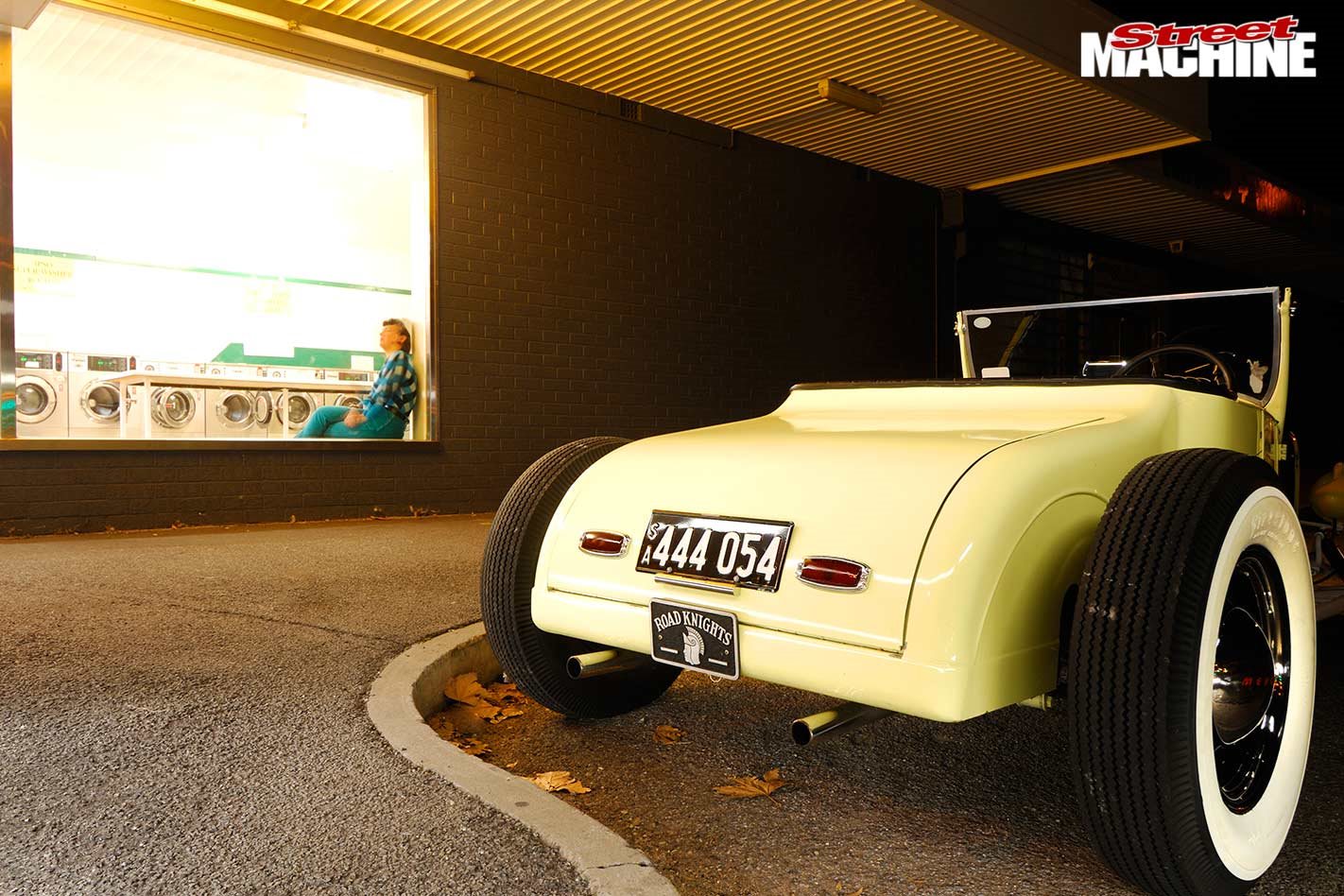 The final replacement was a pale yellow hue inspired by Ray Anderegg’s ’27 roadster, which tied with Blackie Gejeian’s Shish-Kabob ’26 roadster for the America’s Most Beautiful Roadster award in 1955.

Since then, Michael has finished building his Strato Streak-powered Model A tudor, edited many issues of Ignition magazine, and helped more than a few of his mates turn their jalopy-filled dreams into reality. All the while, the sight of Tracy and her girlfriends zipping around in the roadster has been a constant part of the South Oz scene, and a great ambassador for traditional-style hot rods. 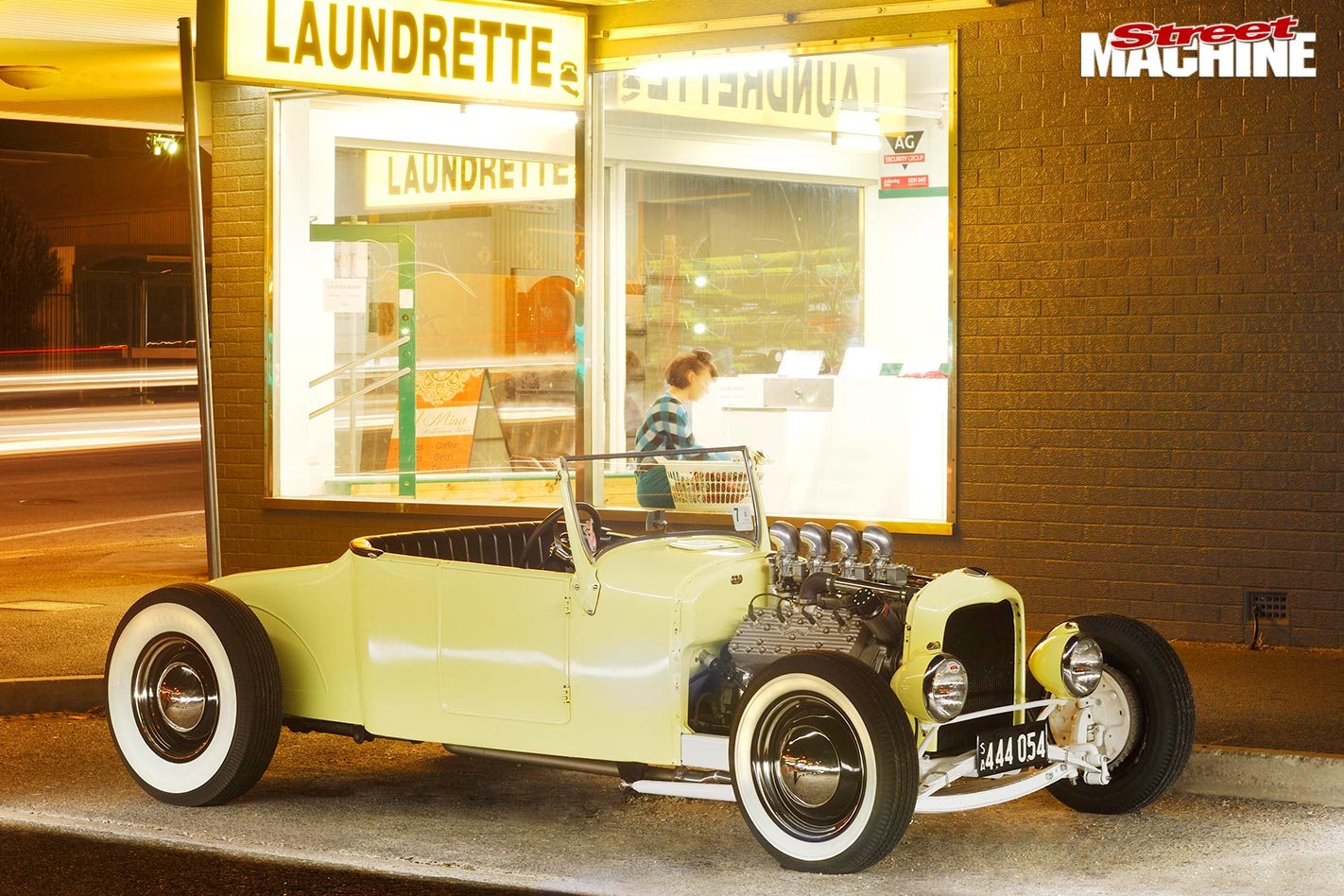 At the end of 2012, Mike made the time to build a new, stronger flathead and slot it into the roadster.

The engine itself was the result of years of collecting goodies, including the set of Edelbrock heads that Michael and Tracy brought back from their first trip to the US in 1997. 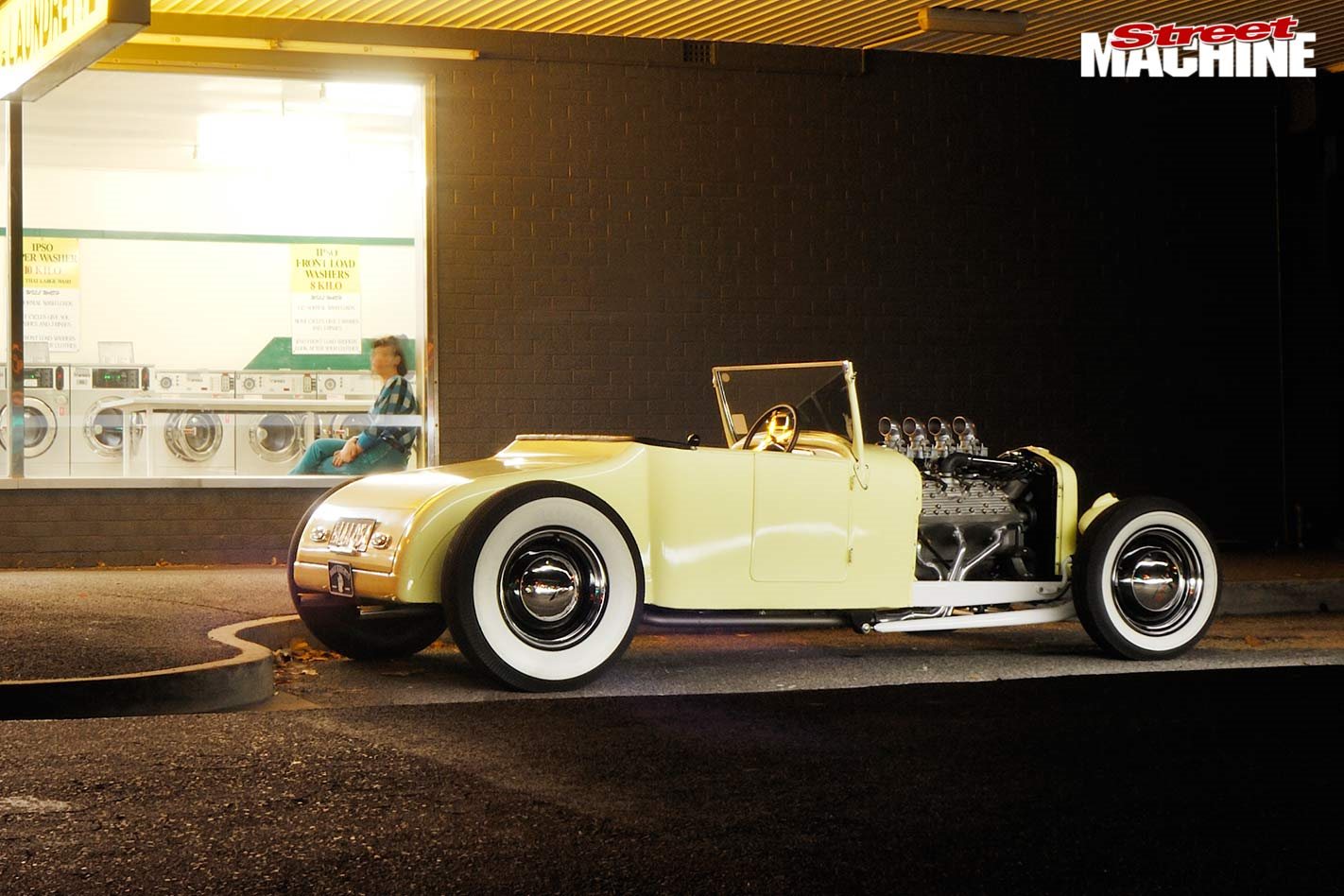 “This is the sixth of these engines I’ve built now,” he says. “They are the same as any other motor, just with fewer bits.”

The decision to run no less than four Stromberg 97s atop a vintage Weiand manifold was the subject of some controversy. “There was a faction that suggested I shouldn’t actually connect all the carbs,” Michael says. “But I had the right guy to tune it; John from Kent Town Autotune. He doesn’t worry about power or torque figures and just concentrates on mixtures and the seat of his pants. Of course, if you just smash down on the throttle you’ll find the flat spot, but if you put your foot in a little slower it’s nice and smooth.” 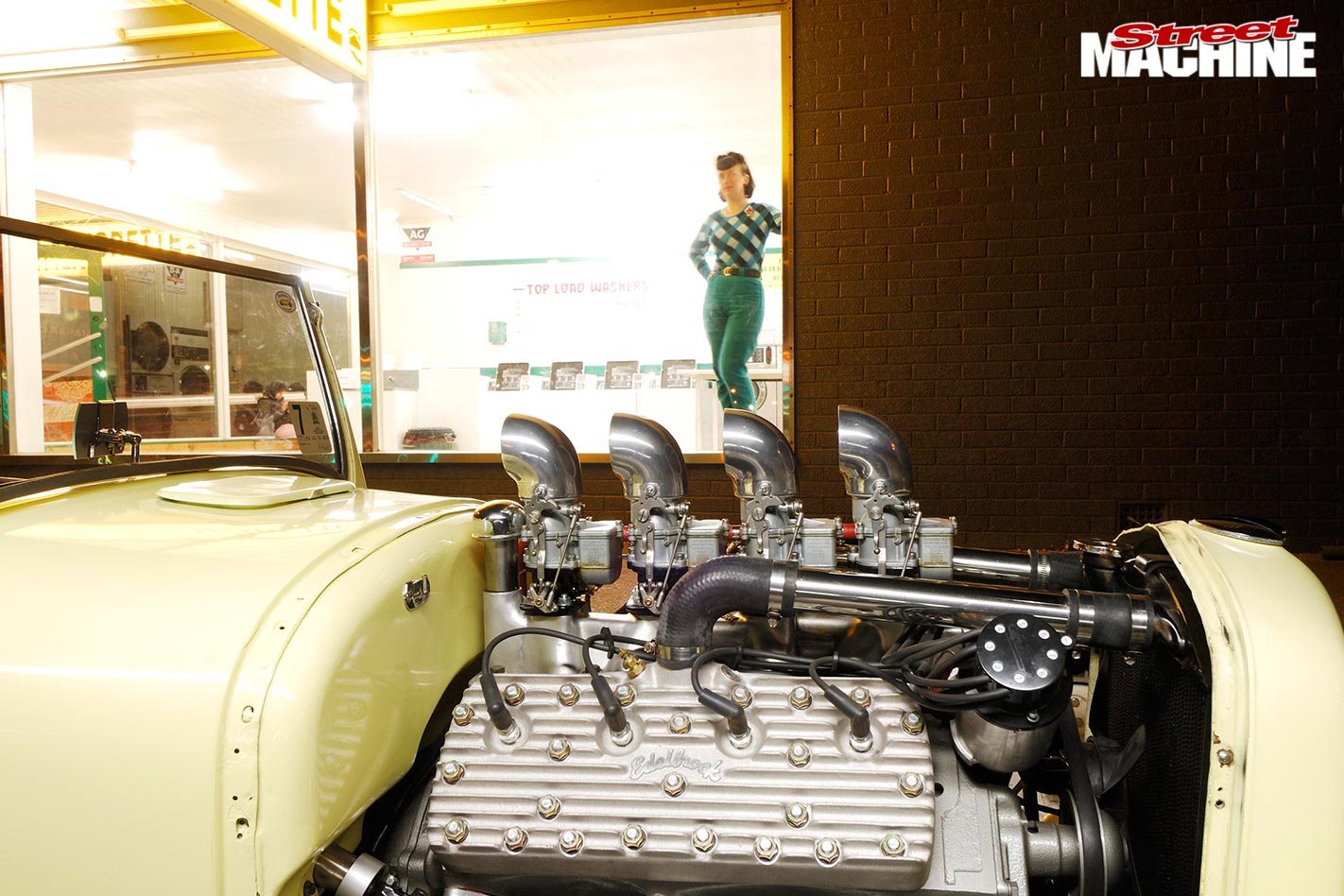 Backed by a Toyota five-speed and BW diff with 4.11:1 gears, Mike reports that the new engine has no problem turning those tall tyres. But, equally as important as the performance upgrade was the visual transformation.

“The motor is mounted up fairly high. Most of the guys building cars like these have them sitting down low, which is really the traditional way of doing it. But having the carbies right up there fixes a few things about this car that I was never happy with, because it visually shortens the bonnet and lowers the windshield.” 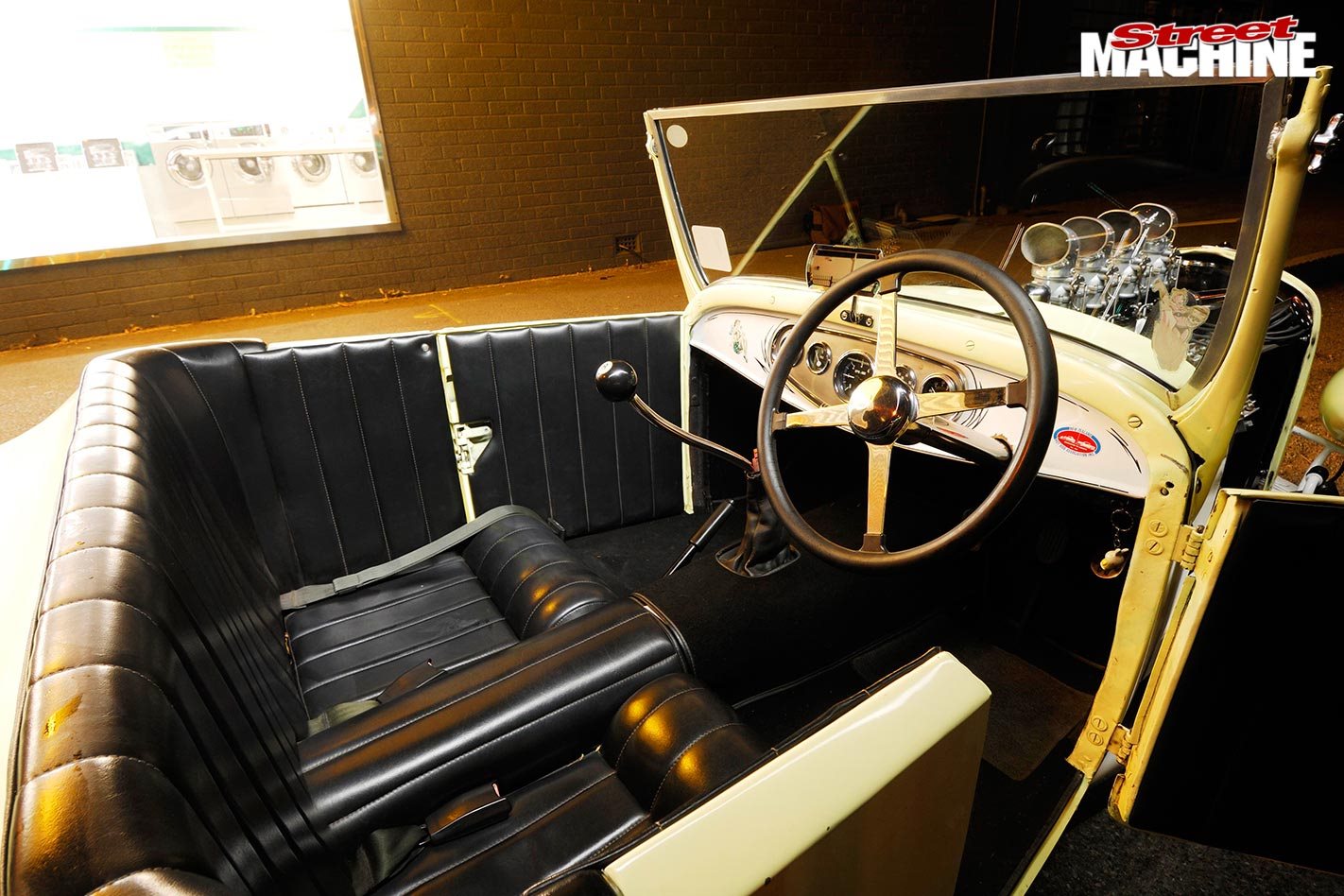 With the roadster running around town without a hood showing off its new muscles, it’s almost as if it has had a midlife makeover, I suggest.

“Yes,” Michael agrees. “It’s been to the gym! It’s a completely different car to drive. There is almost as much noise coming from the carbs and the clackety valve train as there is from the xhaust [laughs]. The clearances are big to suit the camshaft, and there is that ‘tink’ sound from the headers. When you step on it, you can feel the torque twisting the car. It’s a little more temperamental – it doesn’t like to labour – but just give it a big rev and she’s right.” 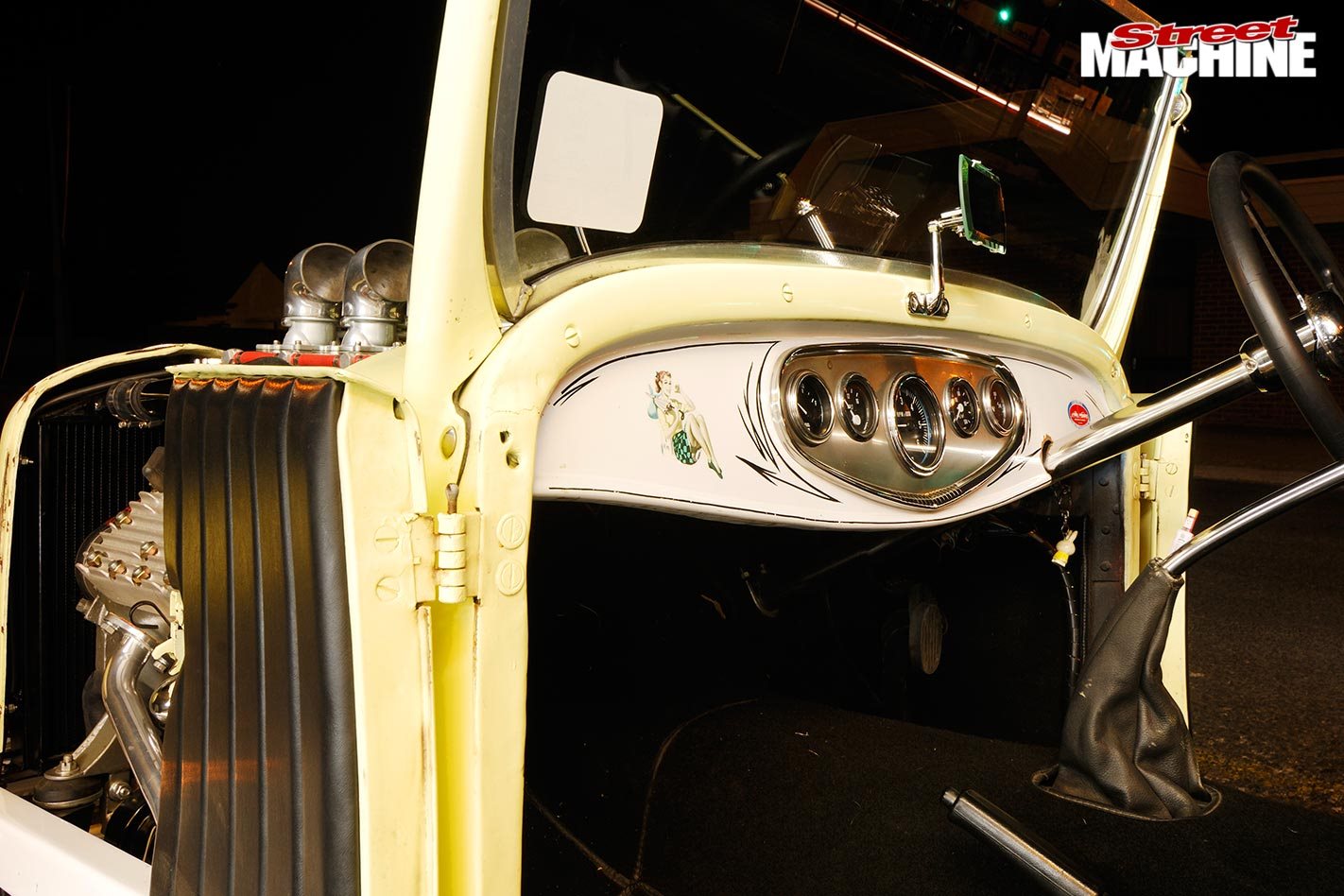 Inside is neat black vinyl trim, a Cragar tiller, ’40 Ford steering column, owner-fabricated shifter and a Vintique rear-view mirror. The instrument cluster is a Stewart Warner five-row item sitting in a ’32 dash panel

Michael’s next adventure is building a Model A roadster powered by a ’53 Cadillac mill. “I want to build one car with all old bits on it,” he says. “It will run a ’39 Ford gearbox and a torque tube. There won’t be any nylocs in it; just castellated nuts and split pins. I used to think I’d never run that old driveline stuff, then I drove Squeak Bell’s Olds-powered roadster in the US. You just have to adjust your driving style and make sure you never get traction if the tyres are spinning.” 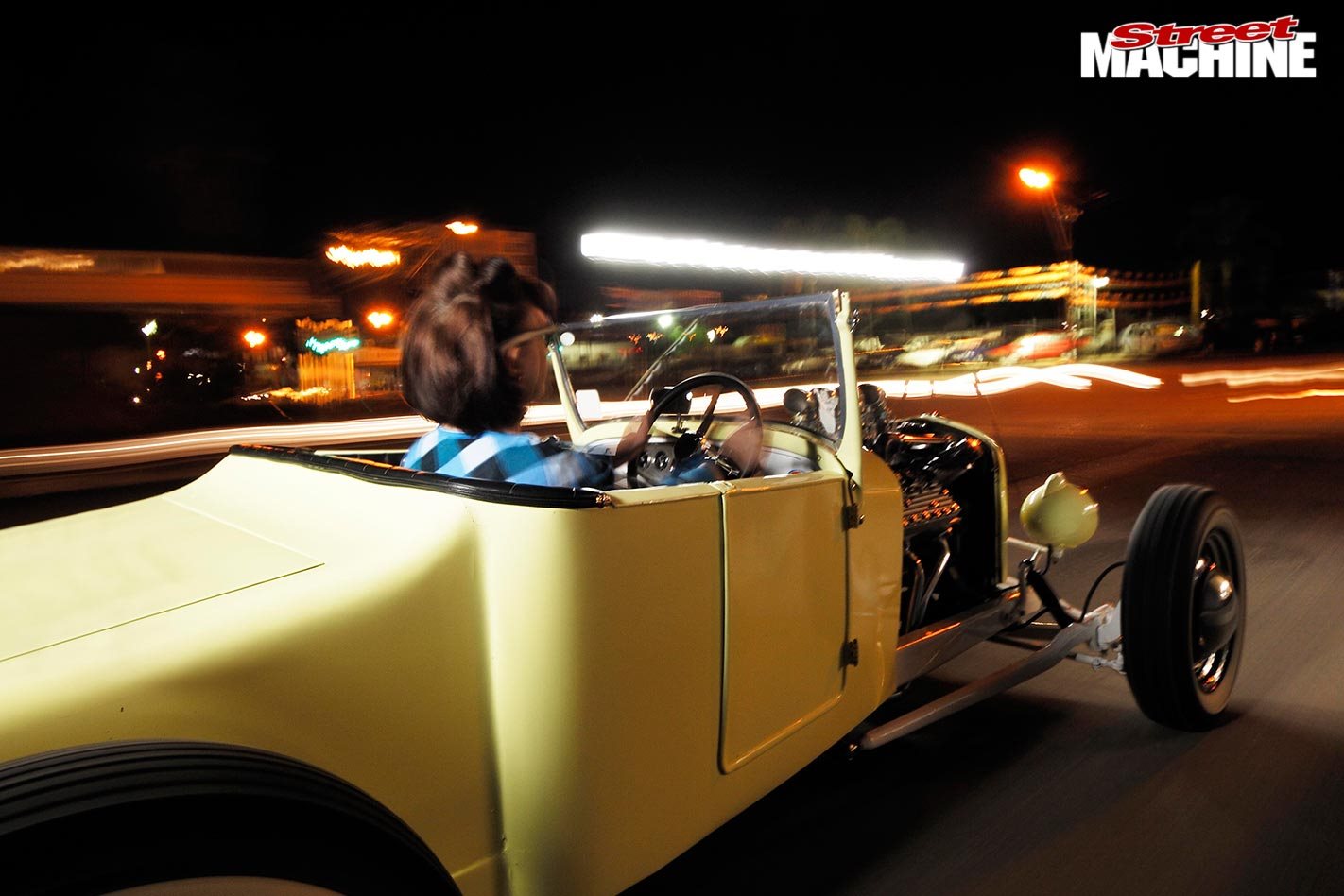 While I’ve since gone on to eat many more massaman curries, I’m still yet to build my own bitchin’ little roadster. Michael’s advice on the subject of jalopy building might surprise those who are inspired by his tale of turning a $200 pile of panels into a rolling smile factory.

“People see a $40 mystery cowl at a swap meet and get excited. I’d tell them to save up and buy a Brookville body instead. The bodywork involved can be overwhelming, especially if it’s the first car you’ve built. It might seem impossible to save up for something good, but it can save you years of work. Start with best stuff you can and consider all the advice you can get. You’ll get it done!” 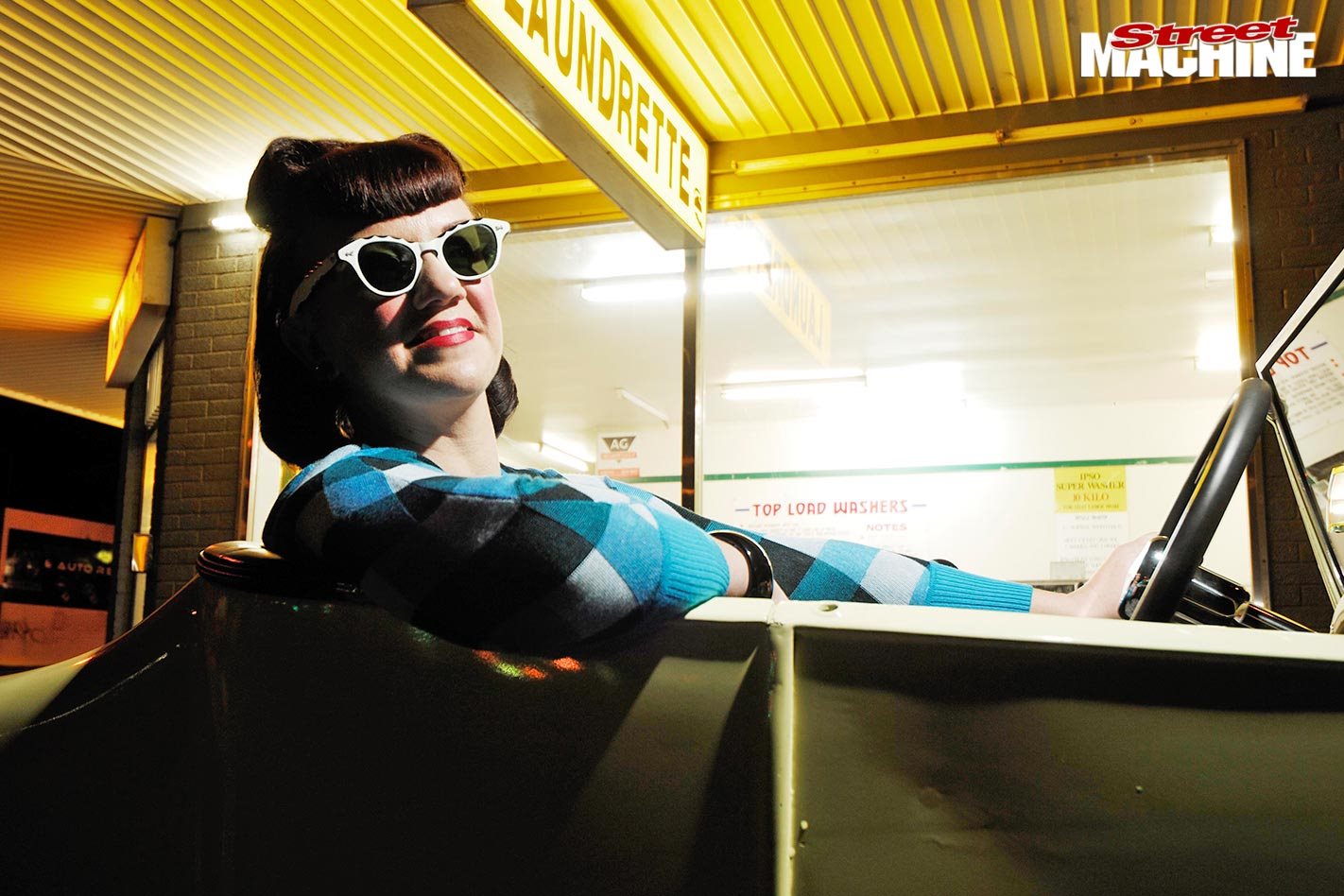