A wild, owner-built rat rod takes on the trailer queens

HARRY Orpwood calls his ankle-biting Model A Tudor a rat rod. His good friend and well-known New Zealand rodder Craig Stare calls it a show rod because of all the chrome on the car

As we all know, project builds can get way out of hand and before you know it you’ve spent or done more than you originally intended. Harry never let the plan go astray from the traditional path he was following; it was more a case of refining things and making a good thing a whole lot better! 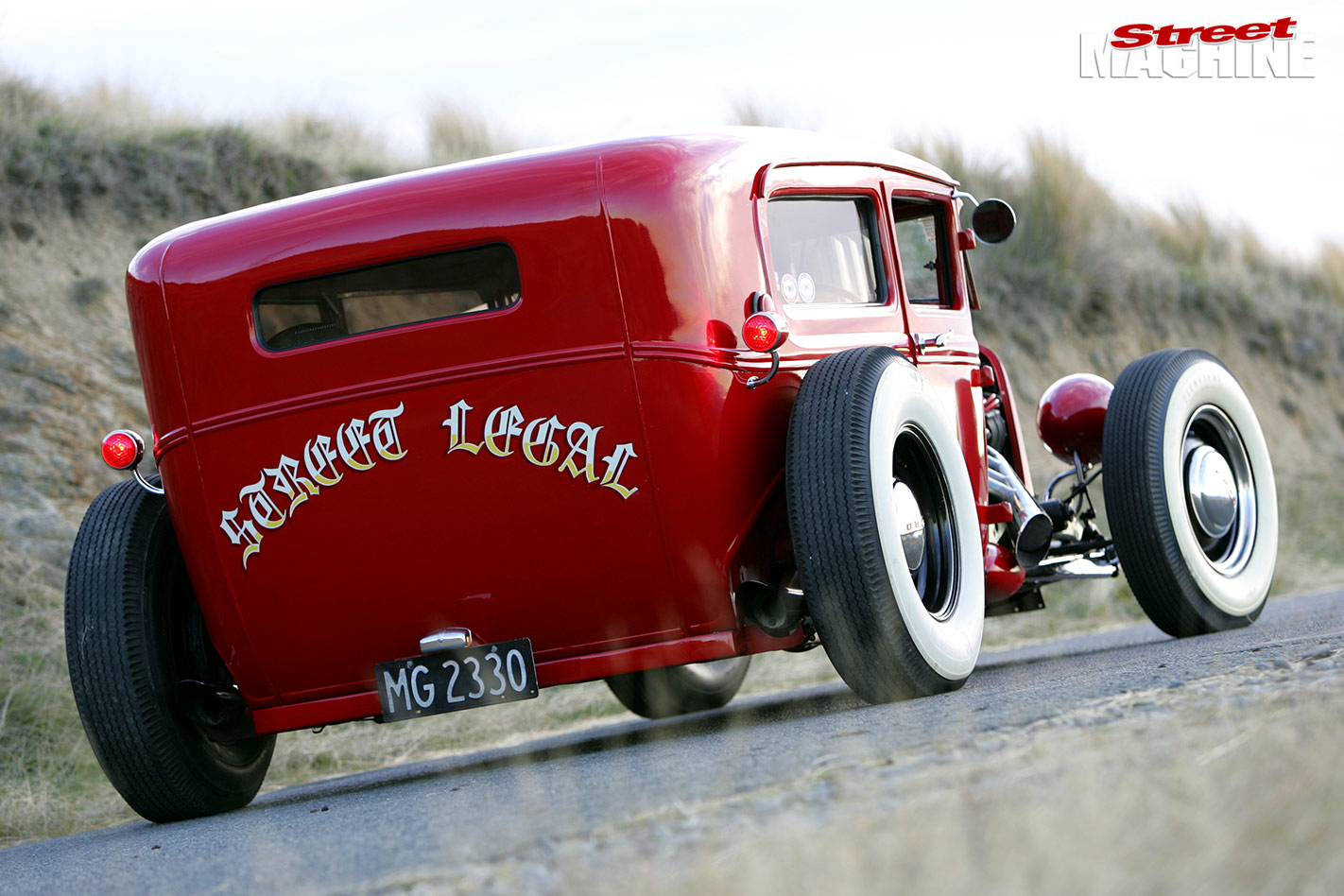 Back in 2001, Christchurch-based Harry was in the States where he visited fellow Kiwi Squeak Bell’s hot rod shop in Bakersfield where Squeak had his famous pub night on a Thursday. Harry distinctly remembers cars from the Shifters and Pedestrian Killers car clubs turning up to enjoy an ale or two.

“There was this wickedly low, like ground-scraping low, rat rod Model A roadster with no boot lid due to the severe chassis kick up and I was just blown away,” says Harry. “It was as rough as hell but that car and others there made me determined to build a similar car back home.” 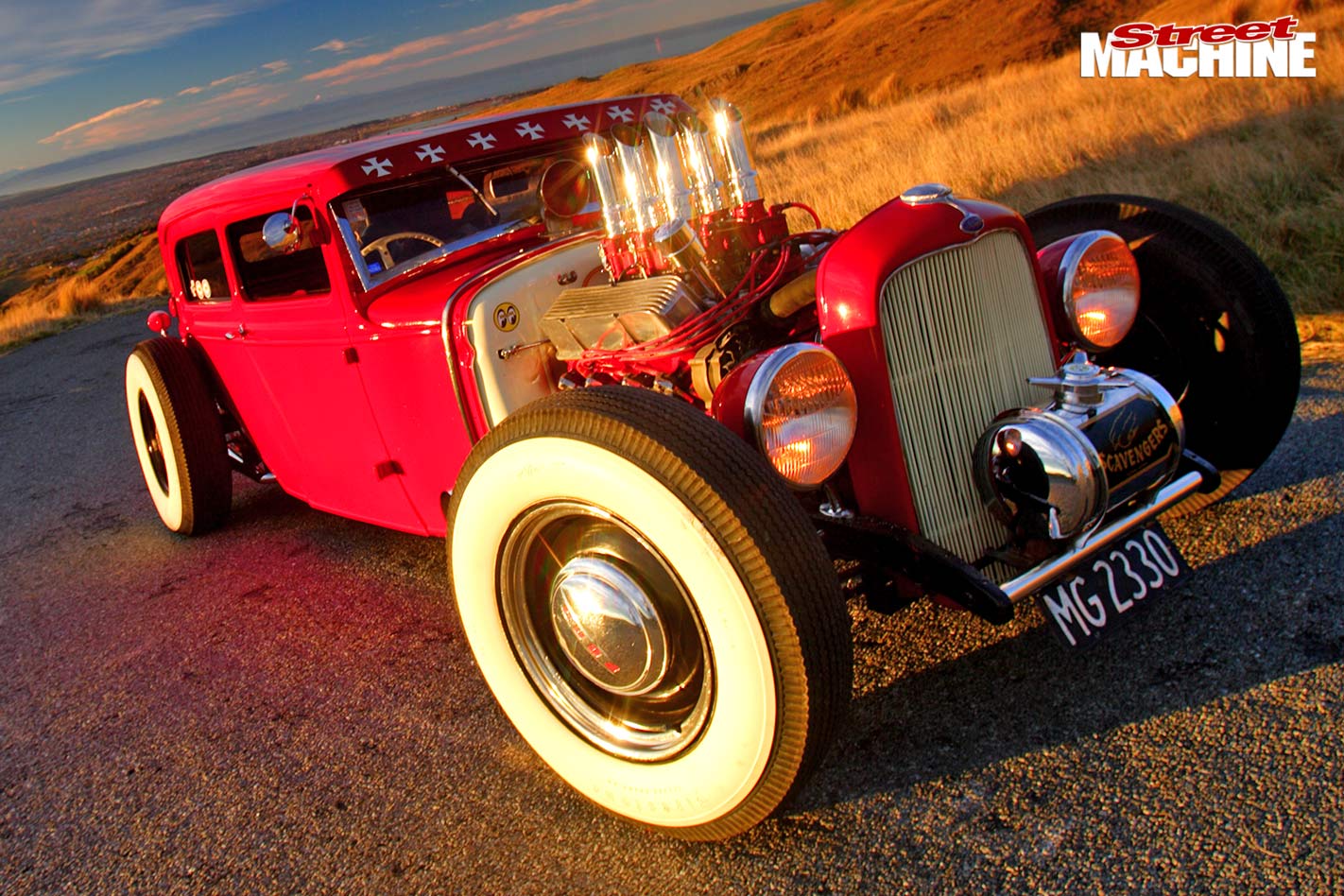 Back home, Harry didn’t need much more inspiration. He’d read about the Auckland-based Scroungers car club, a traditional hot rod club similar to its USA counterparts, and had collected much over his years in the rodding game, as proved by the numerous old-timey rod parts bursting from the seams of his garage.

The project began as a Model A sport coupe as that’s what Harry had obtained. But he ran an ad looking for a Tudor roof to make something different. 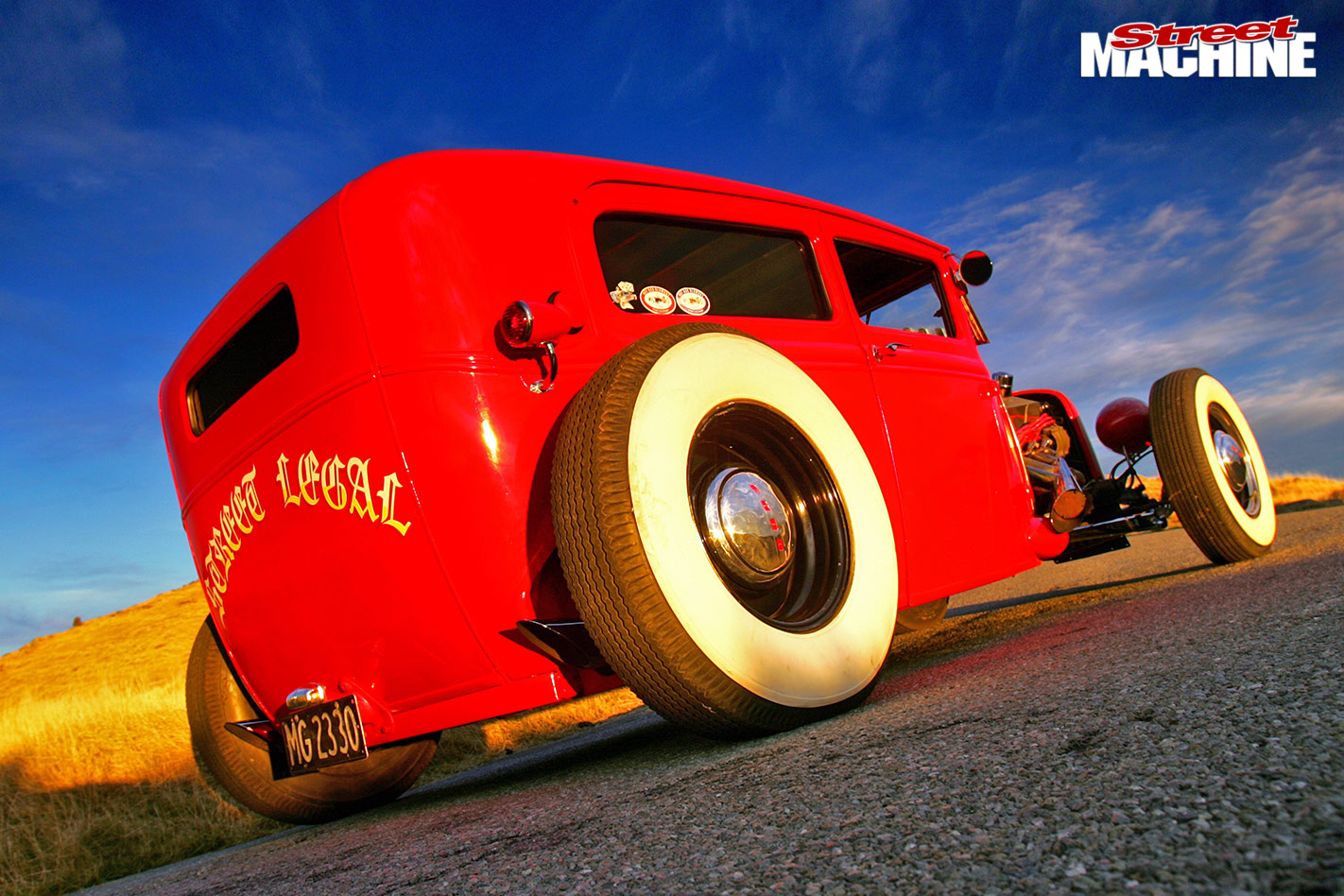 “This guy wasn’t really sure what he had and I ended up going and having a look and it turned out to be a Model A Tudor body that wasn’t in too bad a condition,” remembers Harry. Like all good Model As it was a little rusty around the bottom but there was nothing major.

Rat rods and show rods are built on style and attitude rather than tape measures and calculators, so Harry can’t say how much the roof was chopped nor does he know the exact modifications to the Model A chassis. The whole car was mocked up before building began to ensure that all the proportions were spot on. They were, and the rolling result is something that Harry can be proud of and which draws admirers from all generations. 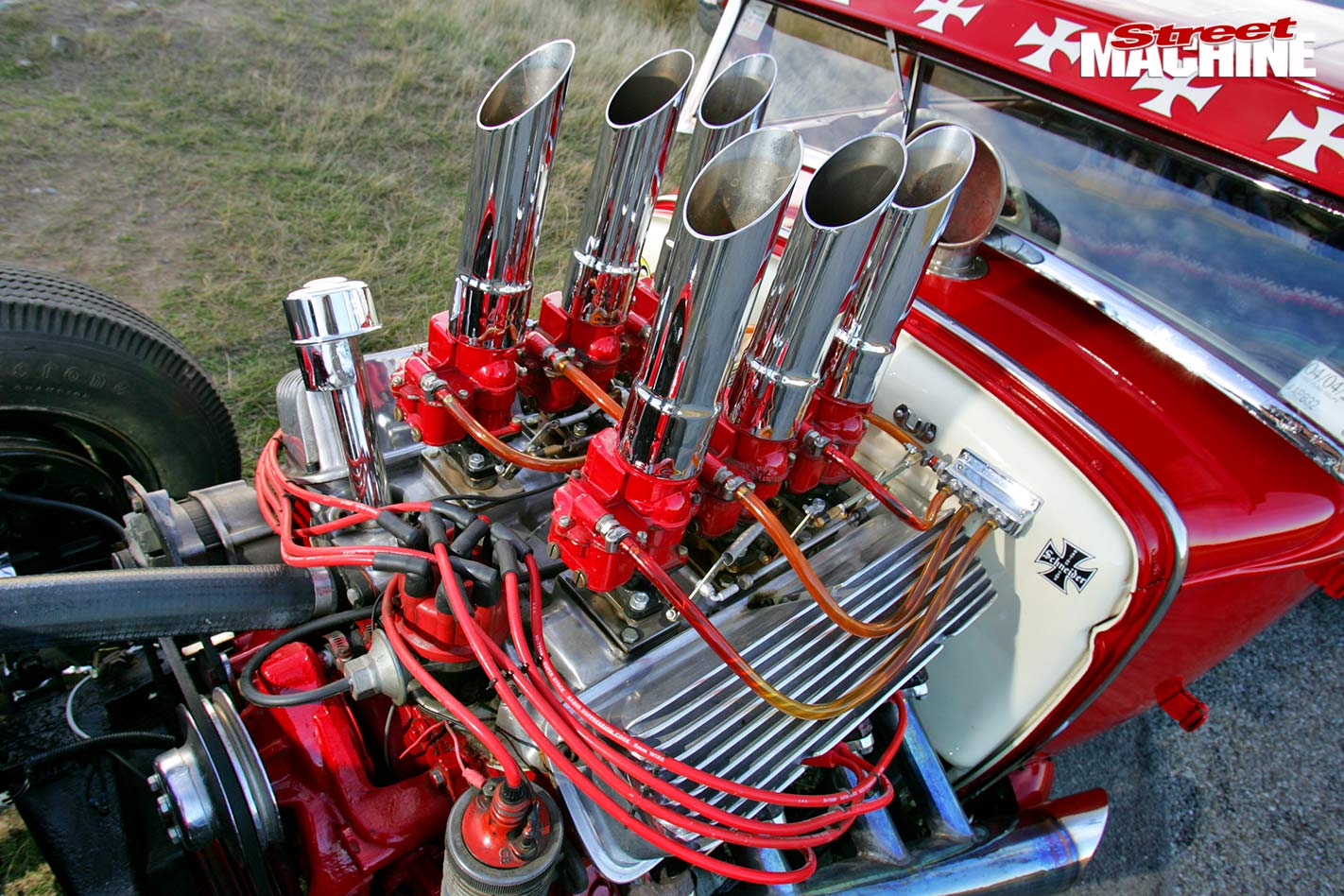 The chassis was channelled its own height, while the front was kicked up even further and works in conjunction with a chromed, drilled and dropped early Ford I-beam axle. The front-end kick helps achieve the low-down channelled stance without cutting into the precious cockpit space – where traditionally, channelled cars can suffer badly. Out back, around 12 inches of rear chassis kick-up accommodates the well-hidden Ford nine-inch.

Once the ride height was right, the old 390 FE big-block was slung between the rails, backed by a Ford C6 trans. This motivation netted second place in the burnout comp at Craig Stare’s annual Street Machine and Muscle Car Madness at Rangiora, Christchurch! With its Edelbrock six-carb intake, finned Moon valve covers (on loan from Squeak Bell) and owner-made headers and carb stacks, the mill oozes cool that takes you back to simpler times. That cool is everywhere on this car, from the white firewall with a trad fuel block to the Deuce grille or the Scotty Bare Maltese crosses on the visor and lettering on the rear. 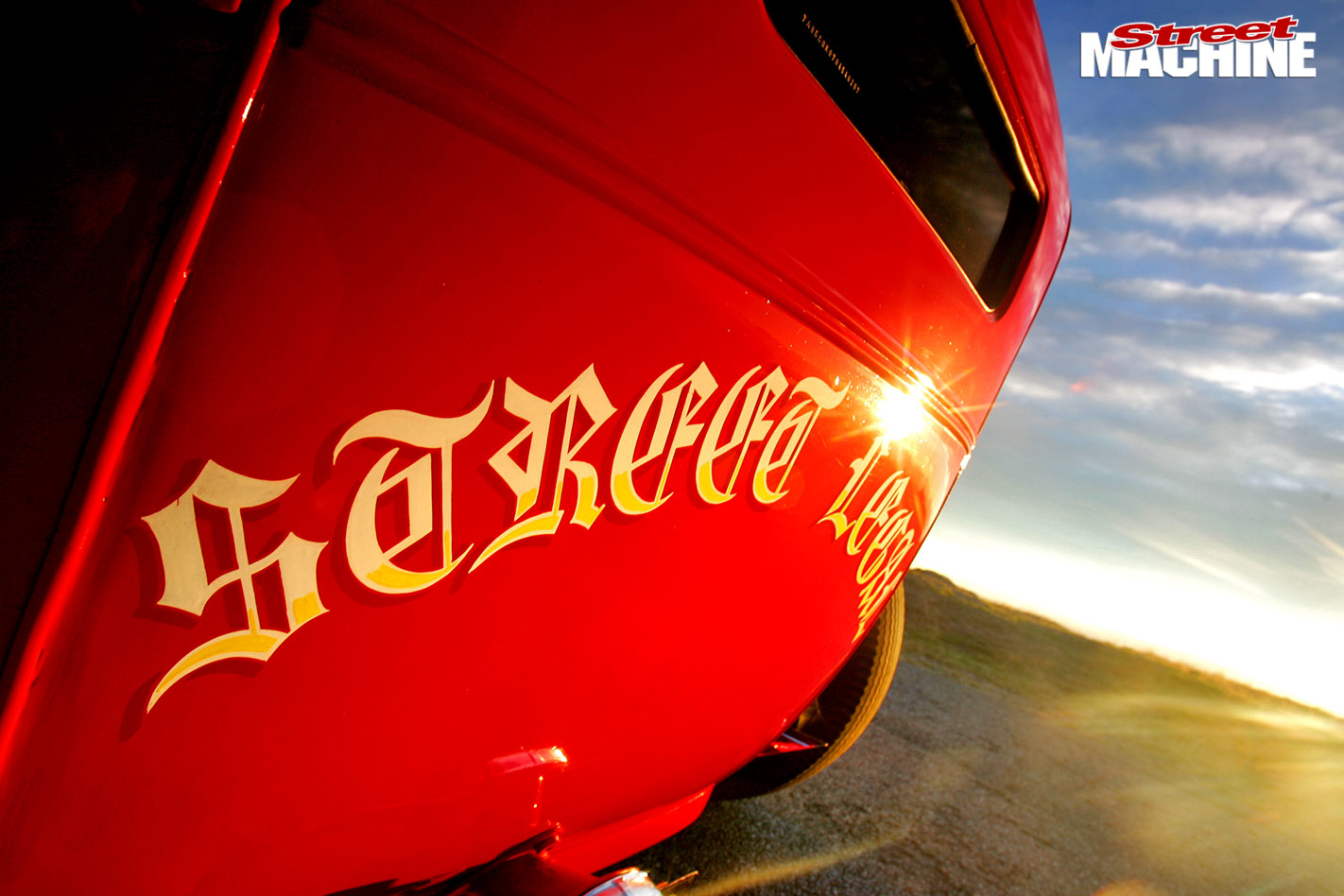 It was never really Harry’s intention to take the car quite this far. Originally he was just trying to throw something together to take to the Street Machine and Muscle Car Madness in 2003. A friend cut Harry a deal on chrome plating so he went crazy there and then felt the car needed paint.

“Craig kept coming round and was giving me heaps about this show rod I was building,” laughs Harry. Although the car was 99 percent owner-built, Harry had to call on some mates to get the car finished in time for the event. Roy Cooper, Barry Livermore, Paul French and Nick Reedy all made themselves available to work until the early hours in the week before the show to prepare the car for paint. Harry’s wife Julia and sons Luke, Justin and Dylan also joined the gang. 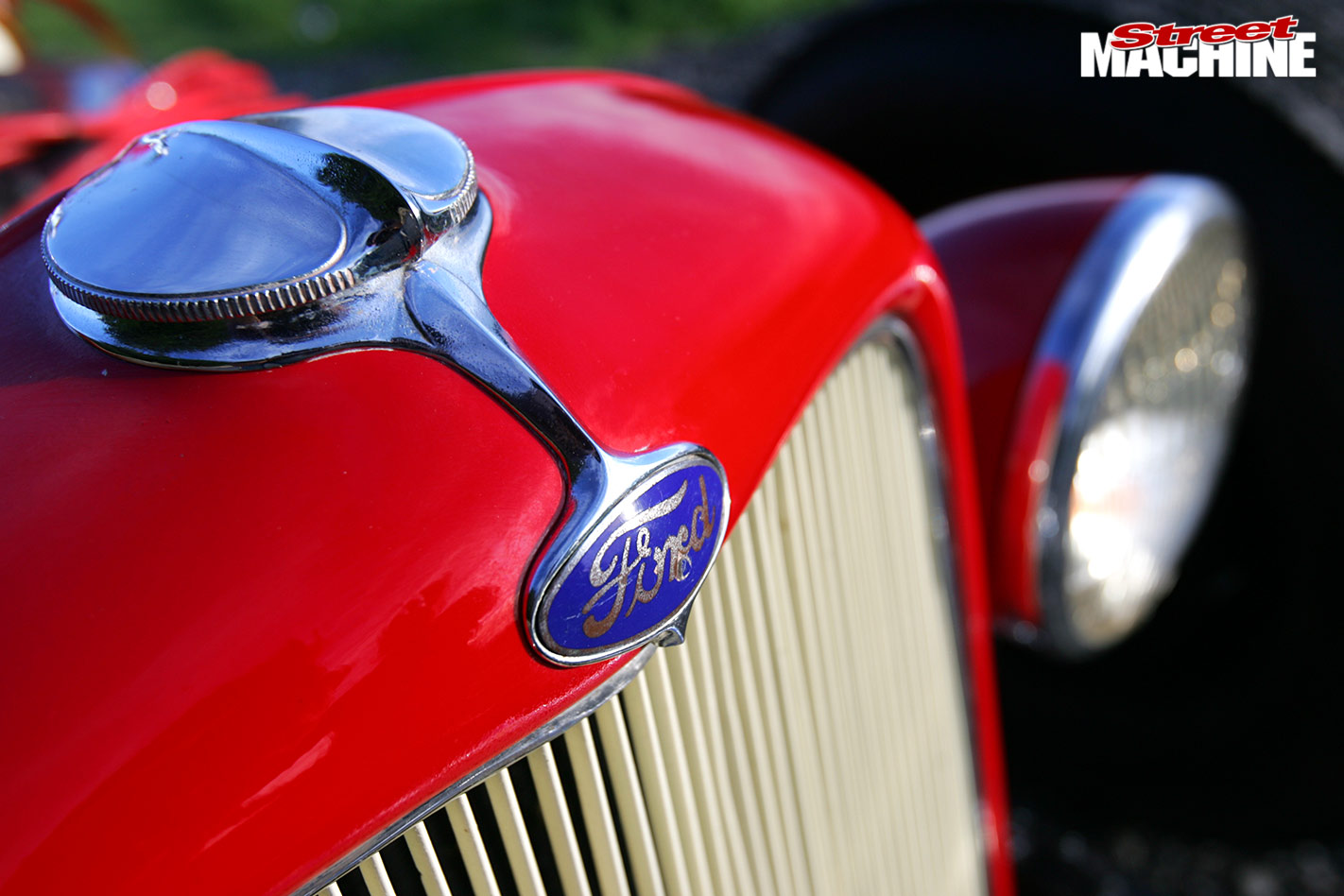 At Muscle Car Madness the Tudor scooped People’s Choice, placed in the Top Five and took Kiwi rodding by the throat and shook it.

“Who would have thought a car so basic could stop rodding in New Zealand dead in its tracks?” Craig Stare asked at the time. Harry didn’t set out to build an inspirational car; it just turned out that way. 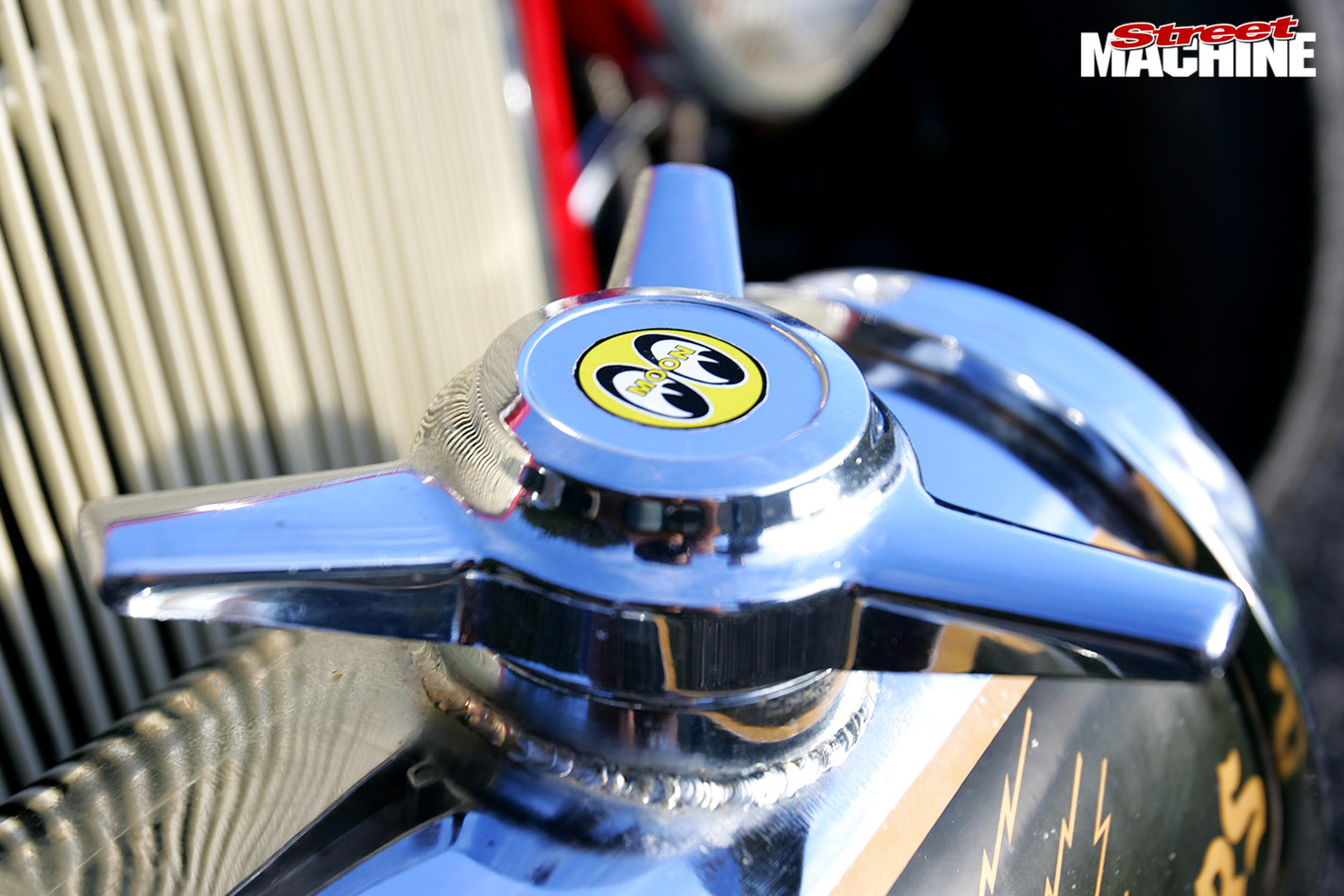 He will ship the car to the US for some rod and custom events in California. Then the car will be left at his good friend Derek Durst’s home for a while.

But none of that is what makes Harry proud; he’s happiest it didn’t cost a lot or take a long time to build. 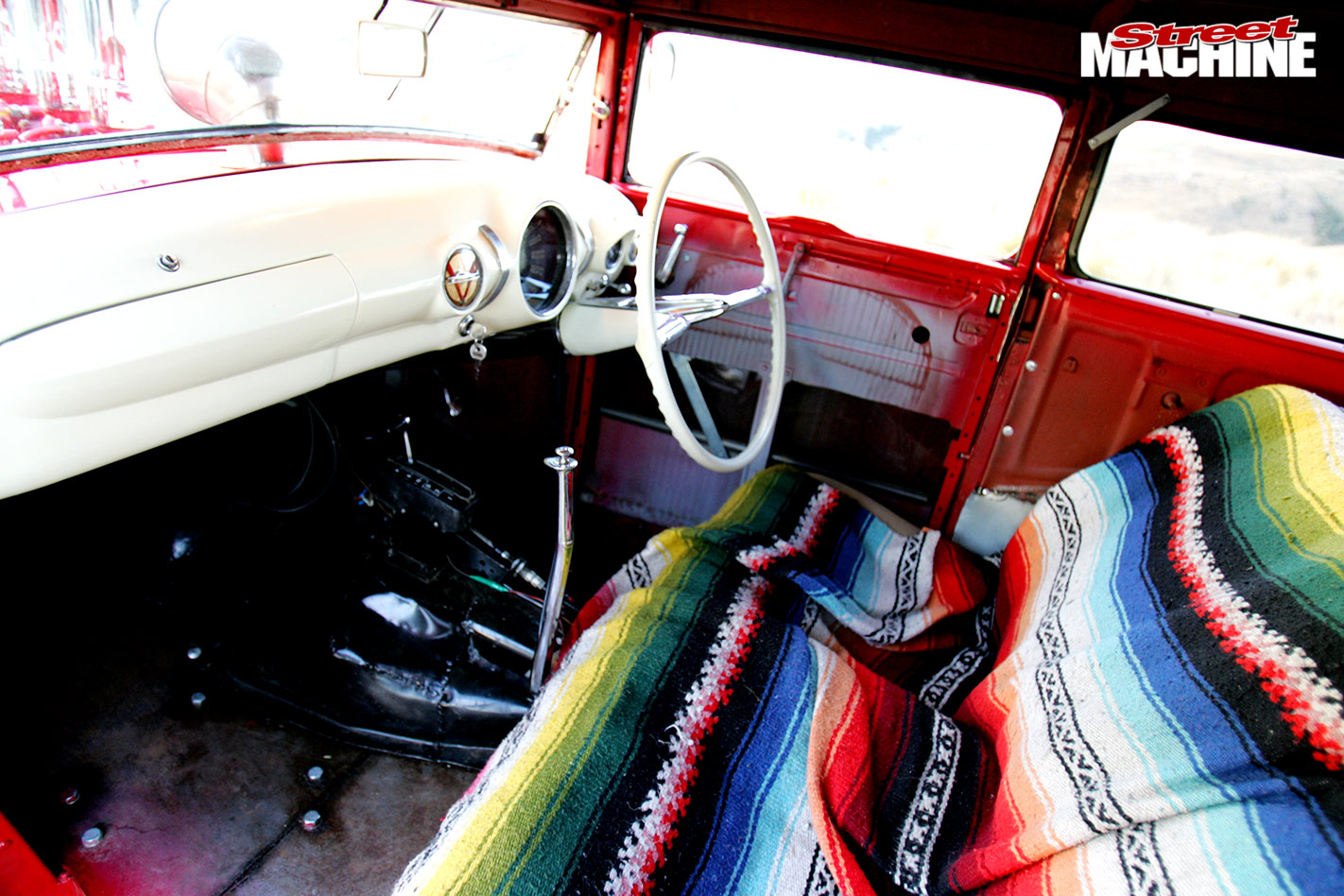 Bending over to check out this limbo-height Model A Tudor, you begin to question its driveability and comfort. Heck, these things weren’t built for comfort; they’re hot rods! With the radical roof chop and the channelling, and the early Ford-style suspension on cross-ply tyres, you’d think it would be one hell of a ride.

Well in fact it’s not all that bad and Harry’s hot rod is reckoned to be better on the road than a lot of independent-suspension vehicles. How’s this for proof? Imagine driving north and crossing the Cook Strait on a 2000km trip to attend the annual Whangamata Beach Hop: no trailers, no concerns about the weather and not even 30 miles on a rebuilt FE engine! Harry’s tin Tudor made the journey without a worry and was a neck-snapper all the way, earning another Top Five placing, and the Best Nostalgia Vehicle gong. 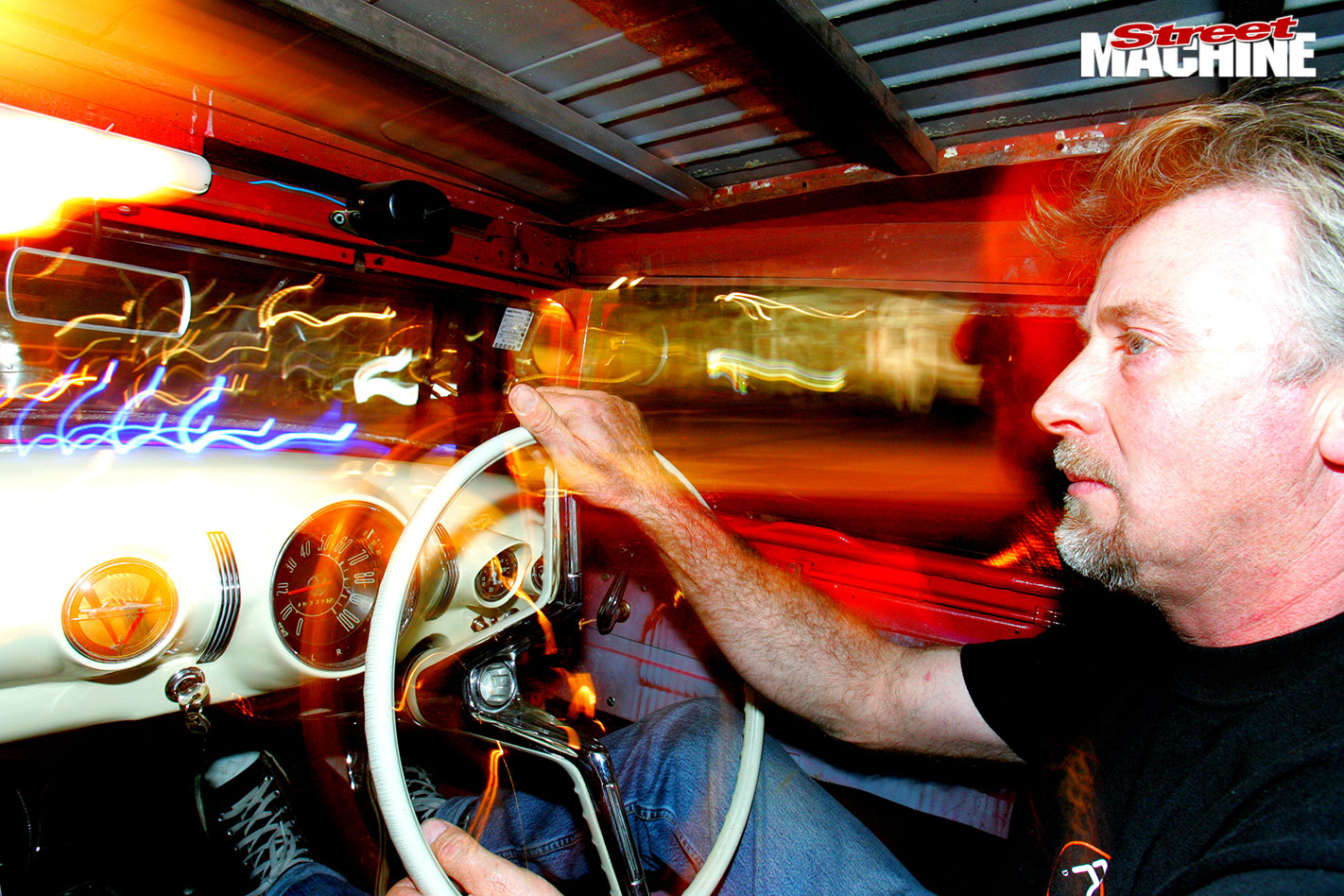 A WAY OF LIFE

Harry Orpwood is a well-respected guy within NZ rodding circles. Over the years he has acquired an impressive collection of parts and cars. In the shed he has a six-carb small-block Chev-powered all-steel Deuce five-window, a beater-style Model A roadster pick-up and a current project in the form of a ’32 Ford sedan. Another interesting car is the OHV Lincoln V8-powered Jennings Special Fiat Topolino, built in 1959. If that’s not enough, after-hours he carries out a lot of restoration and rod-building work for others.

Then there are Harry’s sons’ cars. Luke recently returned from the States with a 1960 Chevy Sports Coupe complete with factory 348 big-block. Justin has an equally cool 1959 Ford two-door found by Squeak Bell. Dylan drives a Morris 8 with a Buick V6 under the bonnet. 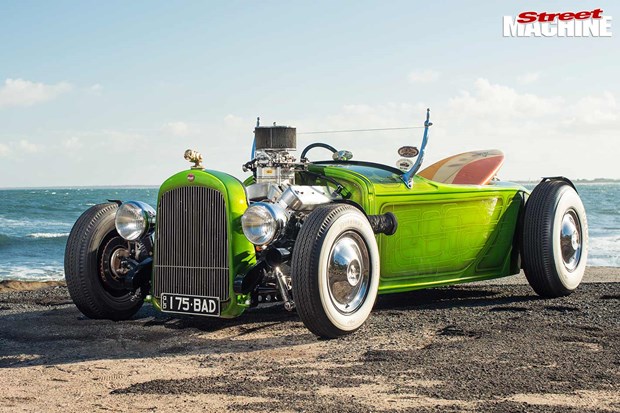 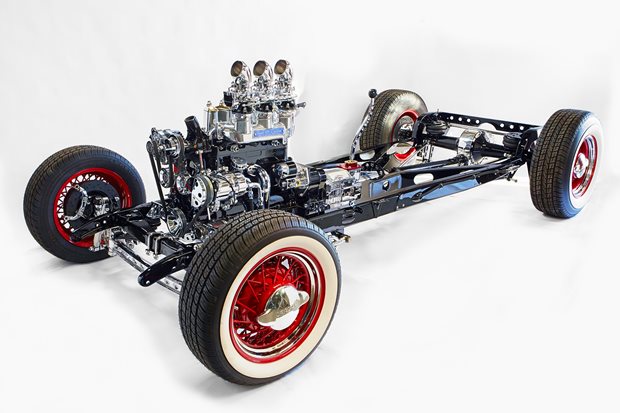