Hillclimb hero from the 50s gets reborn

This article on Cal's roadster was originally published in issue 16 of the Street Machine Hot Rod magazine, 2015

MIKE Nicholas has been instrumental in preserving and promoting hot rodding history in Colorado, USA. The owner of Nick’s Garage in Englewood, Mike is also the mastermind behind the revival of the Hot Rod Hillclimb, and a respected hot rod historian who’s done much to ensure the culture’s heritage is kept alive. Perhaps the greatest example of this has been in his re-creation of a legendary local racecar – the T-33 Chevrolet roadster. 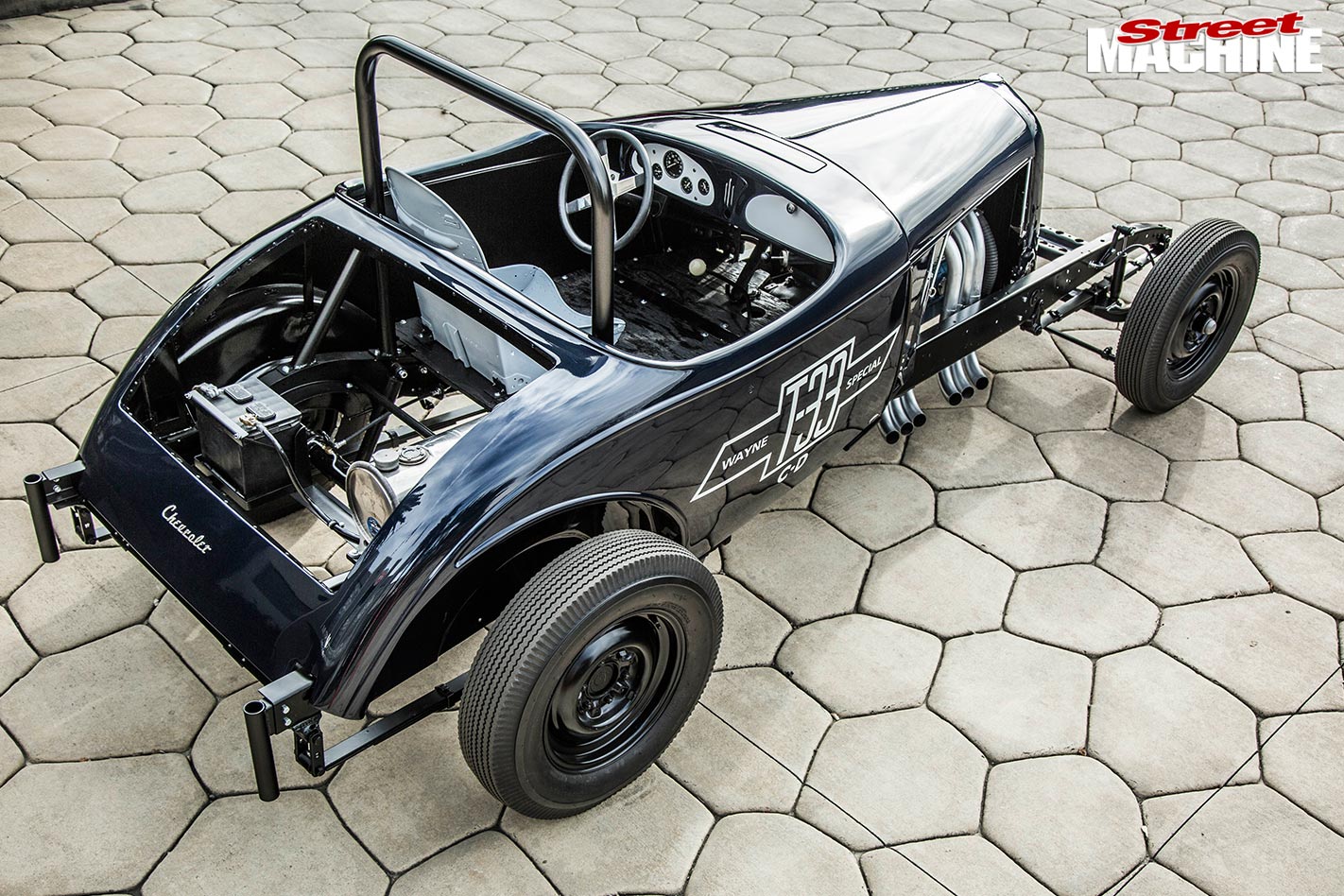 Mike first learned of the car’s story while researching the Georgetown hillclimb events held between 1953 and 1954. One of the roadster’s two original owners was the late Don Scroggs, whose son Dave is still a part of Colorado’s hot rodding community. The other was Cal Kennedy. Mike’s interest was piqued, and he was soon spending time with Cal and Dave learning more about the car and looking at the old photos they’d collected. 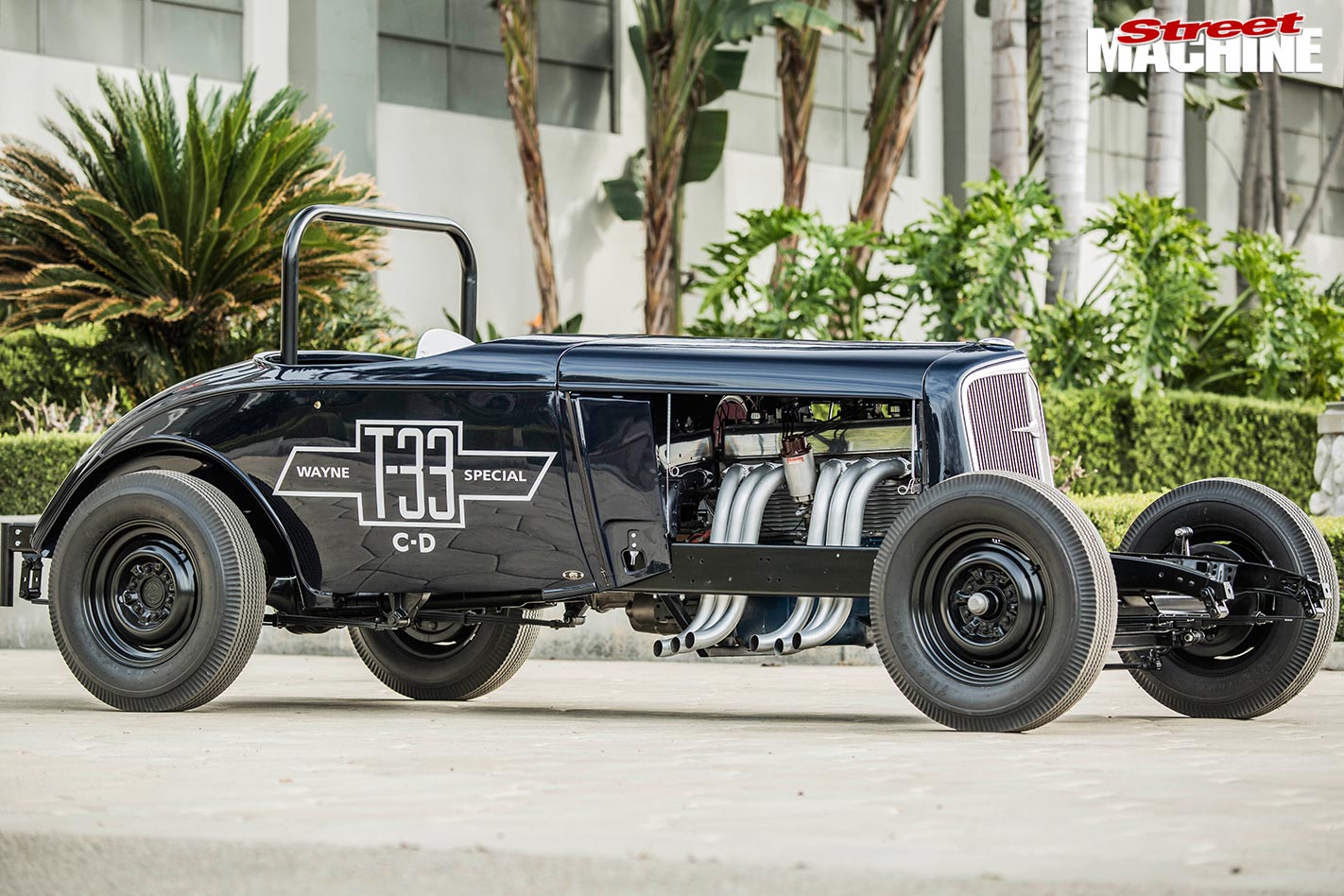 The team at Nick’s Garage started out with a rough-as-hell ’34 Chevy coupe body, and proceeded to hack it to bits, channelling it and replicating the vertical sectioning performed by Cal and Don on the original T-33

The original Kennedy/Scroggs T-33 was built in 1953 on a ’36 Chevrolet truck chassis with a ’34 Chevy roadster body, and was campaigned at many local drag strips and the 1953 Hot Rod Hillclimb. Not long after, Cal and Don came across a race-spec Wayne 12-port Chevy in-line six, and once that was mounted in the T-33 it became a fearsome contender in all the racing events it attended, culminating in a ‘B’ Open Class victory at the 1954 Hot Rod Hillclimb (see more below). 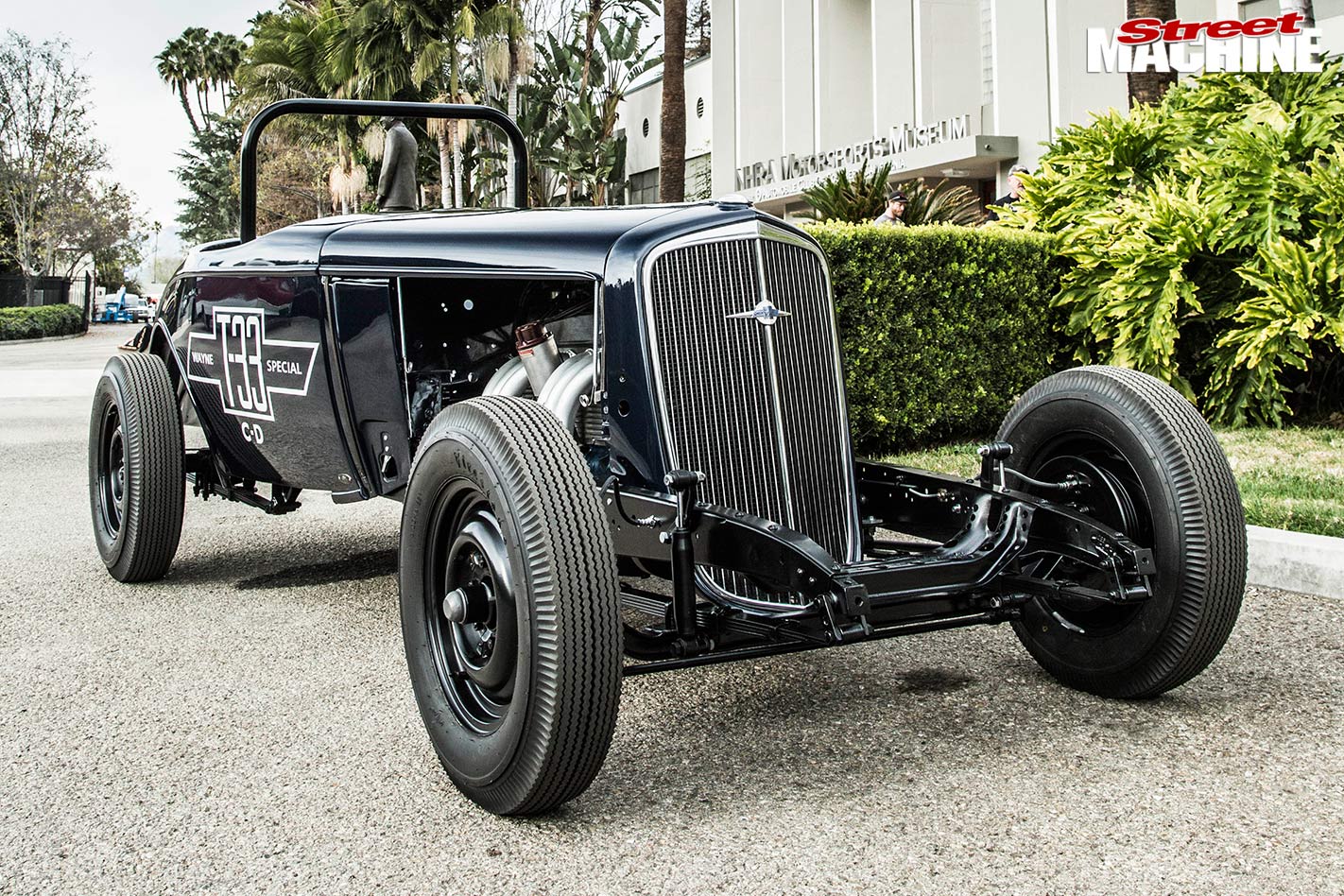 The car sits on a significantly modified 1936 Chevrolet half-ton truck chassis. Chopped up, narrowed and drilled out, it provides a long, stable platform for racing

As time went on, the car evolved into a dragster, winning Top Eliminator in 1958. But after six very successful years of racing, the end was nigh for the T-33. The car was dismantled, and the body and chassis have since disappeared. Fortunately, Cal had stored the Wayne motor at his house. 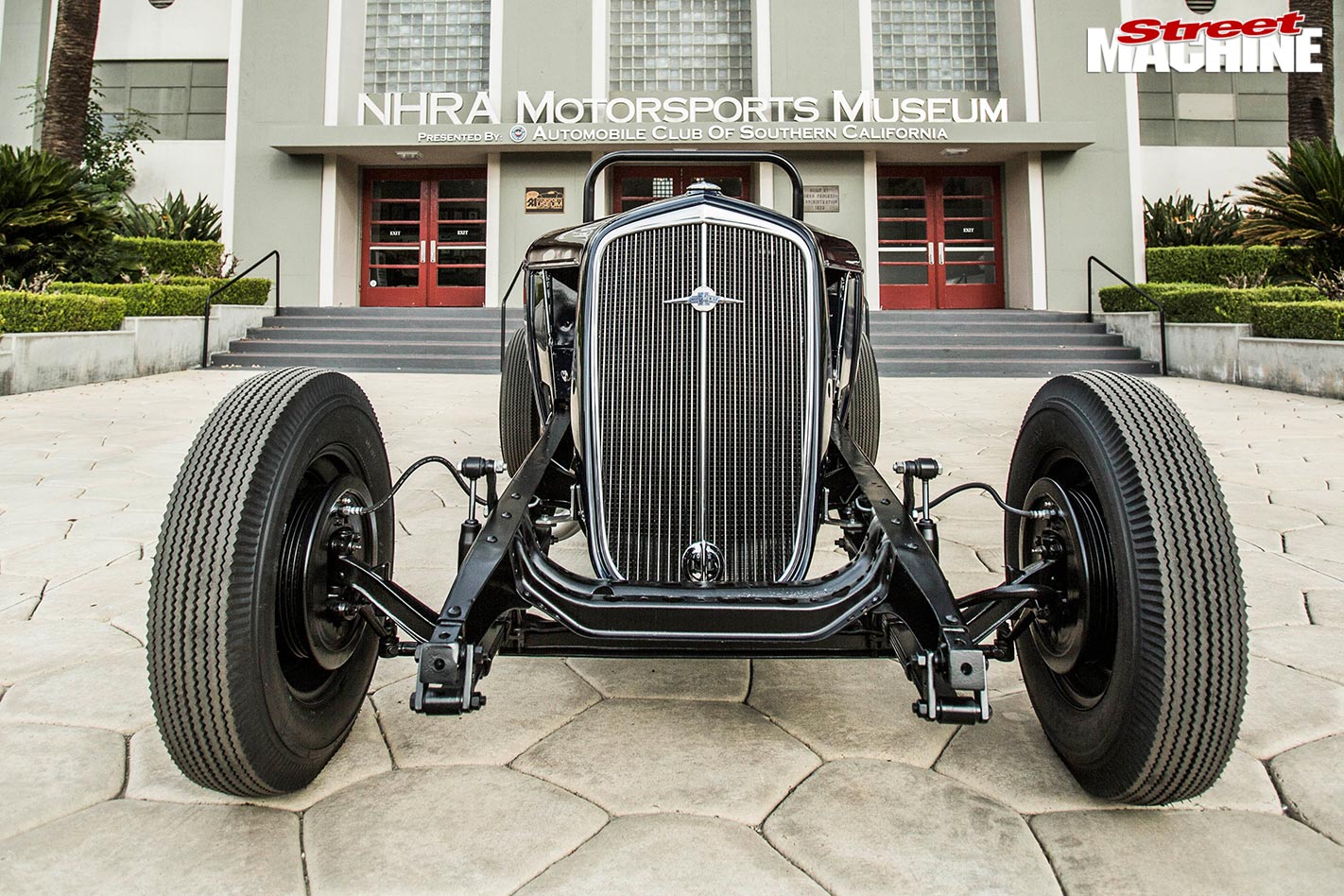 “When I found out that [Cal] still had the Wayne motor it clicked for me,” Mike recalls. “I said we really needed to figure out how to recreate this car around the original motor. It was a good-looking car and not just another ’29 roadster or ’32 coupe racecar.”

And so the process began. With help from Cal and Dave and a host of other local rodders including Tom Wentworth and Phil Trill, the Nick’s Garage crew began piecing together what was necessary to breathe life back into the Wayne motor and build a car around it. 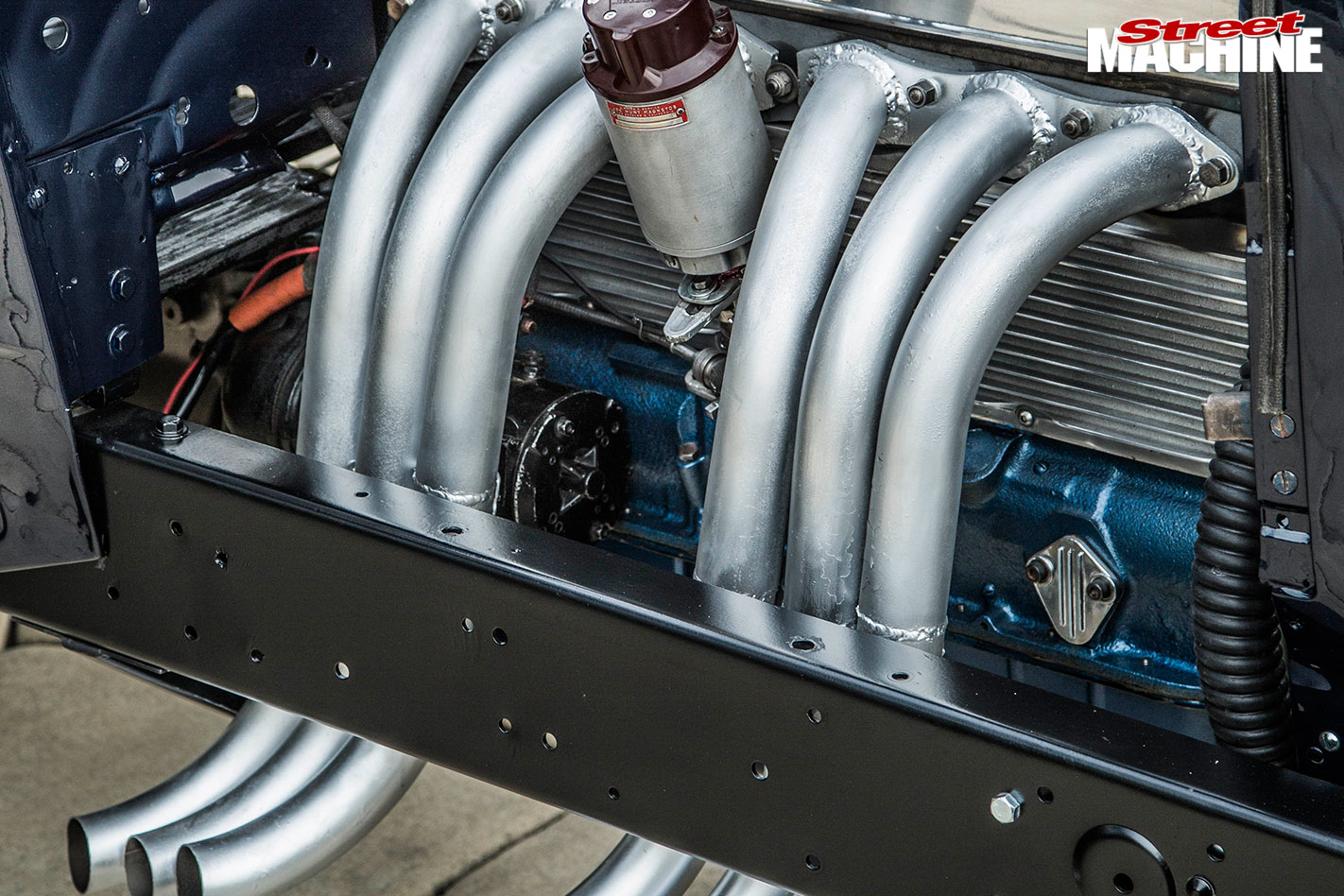 With a rare Wayne head and internals such as a full-race Spalding cam, crossdrilled crank and unique Frank Venolia aluminium pistons, the Wayne in-line six Chev is capable of 250hp. The intake was modified to suit three Stromberg 97s, while the exhaust gases are spat out of two-inch zoomies on the other side of the block

Mike spent a few fruitless months scouring the internet for a 1936 Chevy truck chassis before eventually finding one in Albuquerque, New Mexico. Unable to find an affordable ’34 Chevy roadster body suited to the task, and not wanting to fork out thousands for a primo body that would eventually be hacked into pieces, Mike tracked down a local man with a ’34 five-window Chev coupe body. It had definitely seen better times, but would give Mike the best route towards recreating the unique T-33 body. “It really was a rough-ass, piece-of-crap body,” he says. “We cut the doors and the top off and cut it all into pieces. We clamped it all together to try and figure out where everything would sit and what it would look like before we started.” 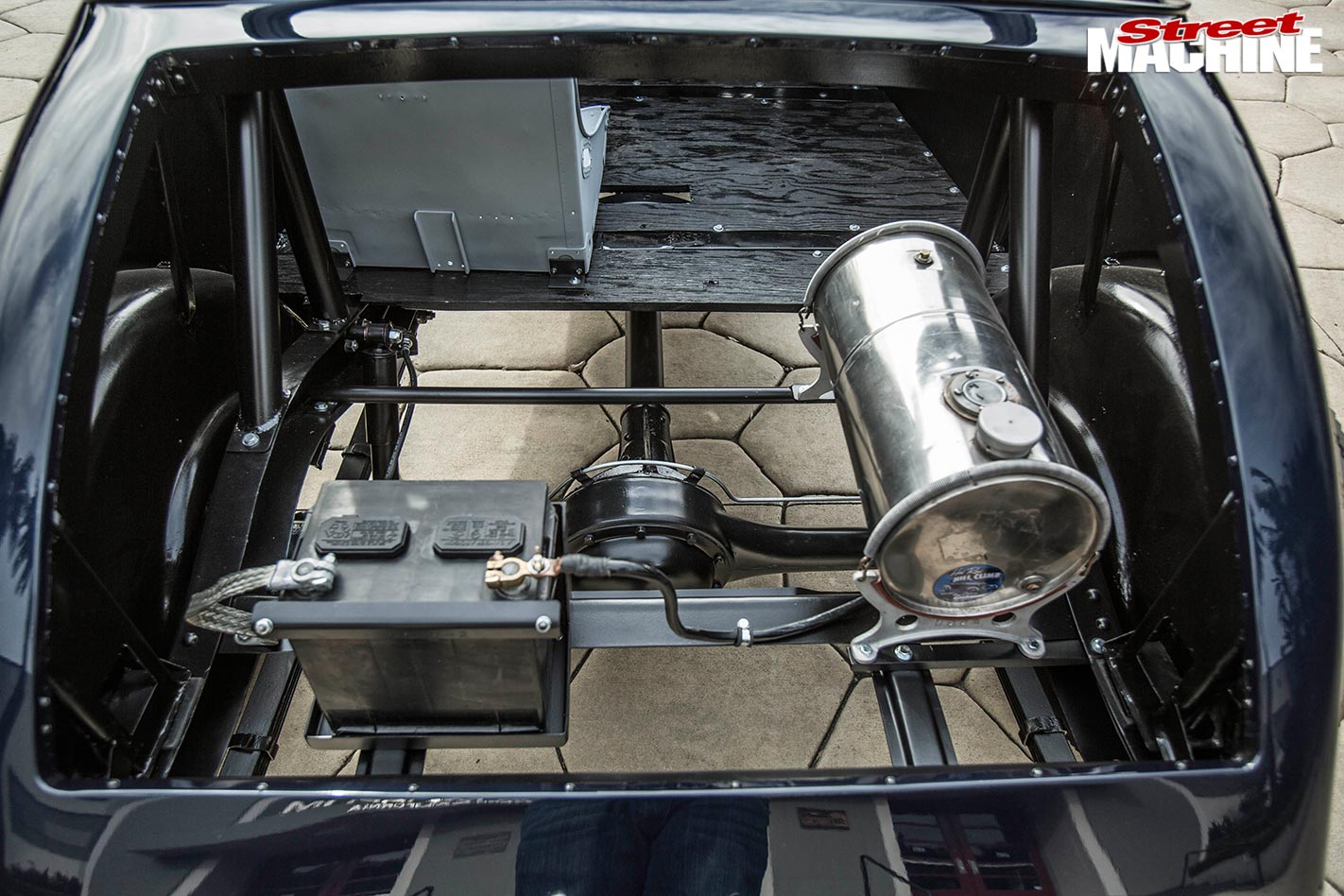 Behind that giant bent-tube rollbar you’ll find a Moon fuel tank and a battery sitting atop the rear crossmember. Without the bootlid (as the original car was) you can see the fabrication work that has gone into the chassis, running gear and brake lines

When putting the original car together, Cal and Don had basically measured up the rear of the ’34 roadster body, cut away an 18-inch vertical section of metal from behind the doors, and moved the cowl back so that the engine could come with it. The team at Nick’s Garage took a few liberties with their re-creation in this regard, such as stretching the cowl to make the body look longer and swoopier than the original, as well as tidying up the body lines and fi tment of the rear to do away with the original car’s rudimentary channel job. After all the metalwork was done, the body was coated in a lick of 1940 Chevrolet Constitution Blue. 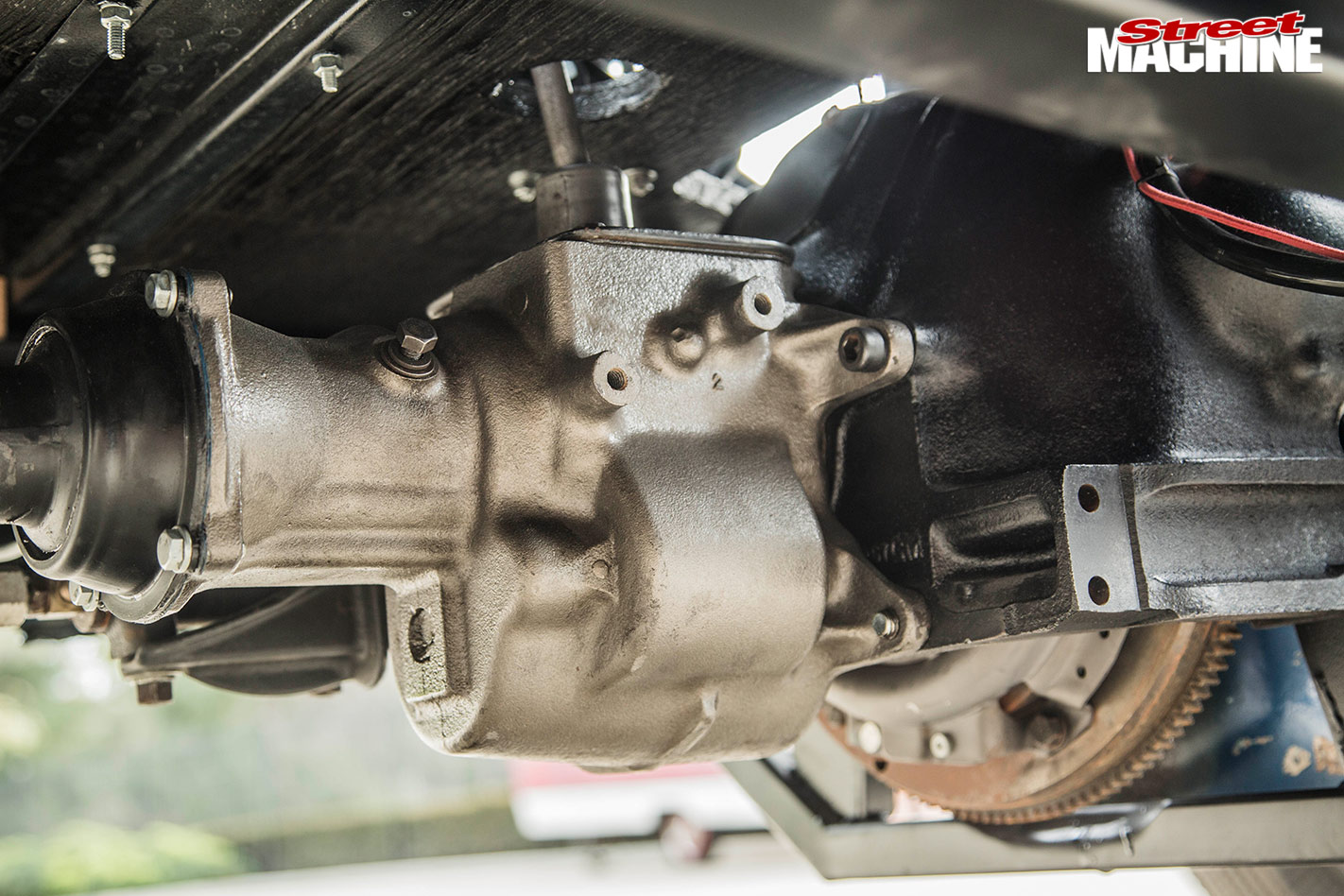 The car includes all the rolling gear that came with the ’36 truck chassis, including springs, shocks, steering and even brakes – refurbished, of course. A few springs have been taken out of the front and back to lower the body and loosen up the heavy-duty truck leaf-packs, and the whole thing rolls on 16x4in steel wheels up front and 16x5s in the rear, shod in 16x6 and 16x6.5 Firestone rubber.

A 1940 Chevy diff is turned by a 40s three-speed truck ’box and the angry 12-port Wayne engine that makes this car such a special piece of history (see more below). 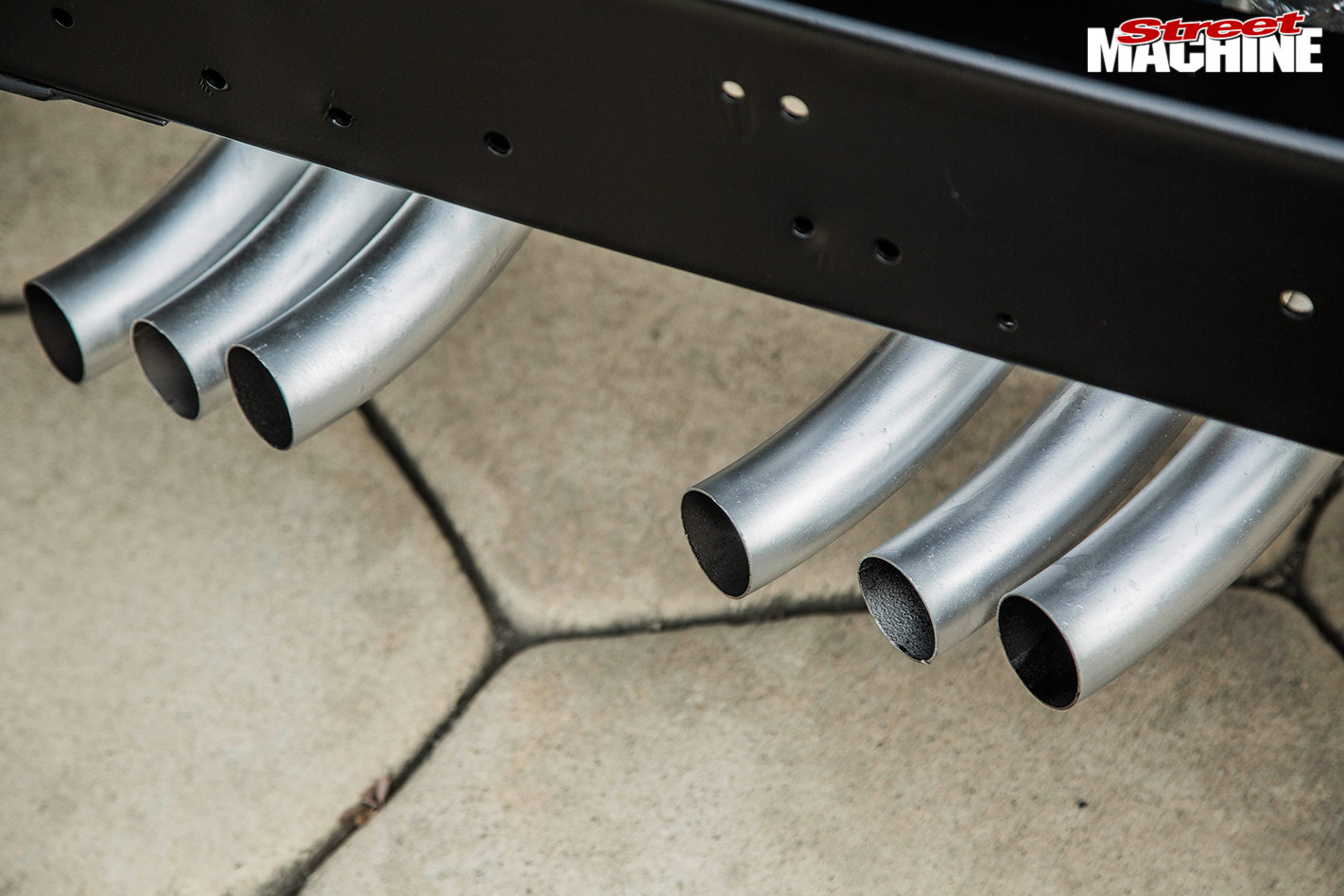 Mike says that less than 100 of these engines were made, and only about 50 are still accounted for globally, so the fact that Cal had kept this original motor in the crawlspace of his home for over 55 years made the re-creation of the T-33 an extraordinary undertaking. 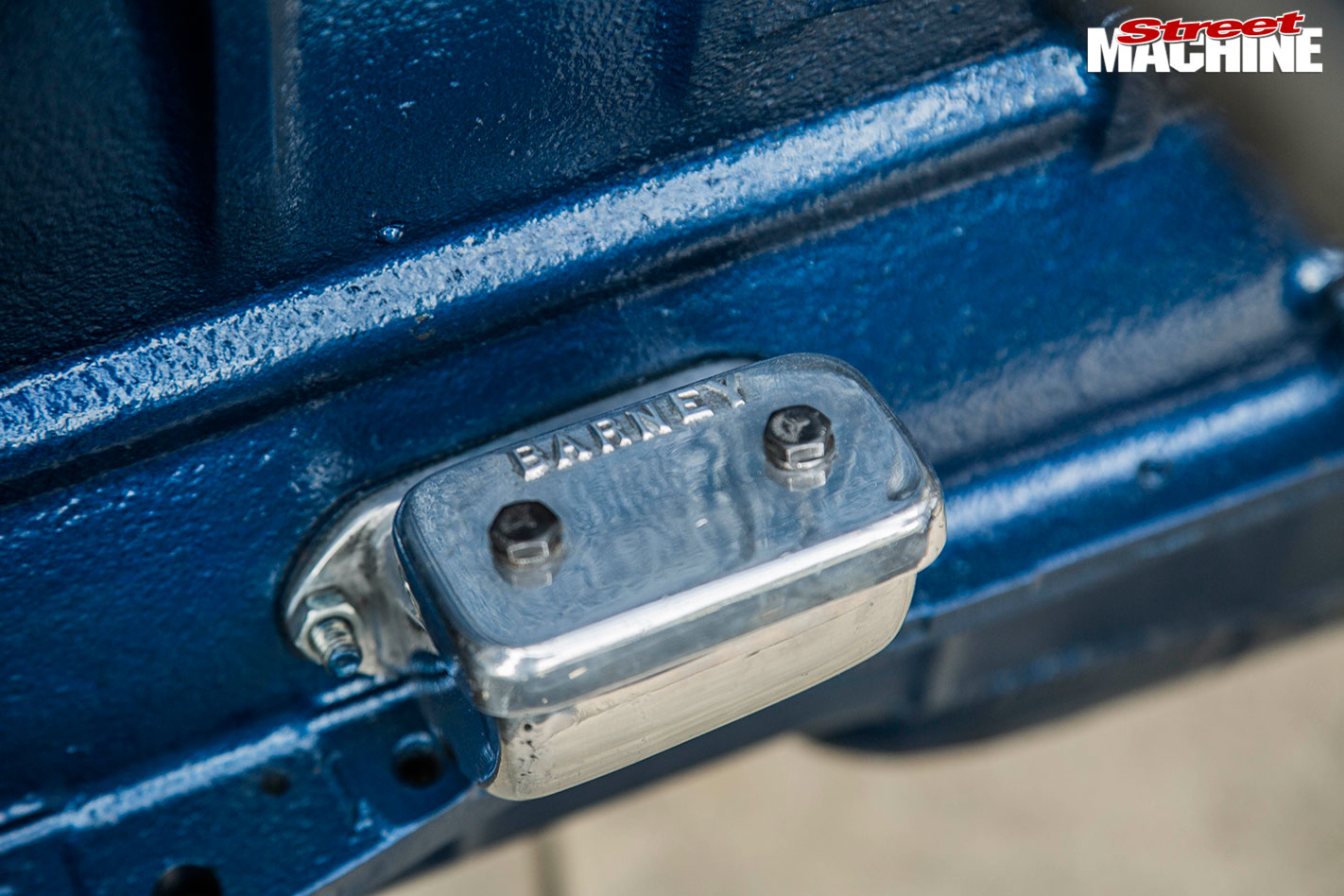 It took the team eight long months of work to get the car running for its debut at the 2014 Hot Rod Hillclimb, and Mike recalls that even then they fell a little short of where they wanted to be at that point. “We wanted to get the car done and get the motor running so Cal could drive it up the hill – and we did that – but it still had some unfi nished bits.” 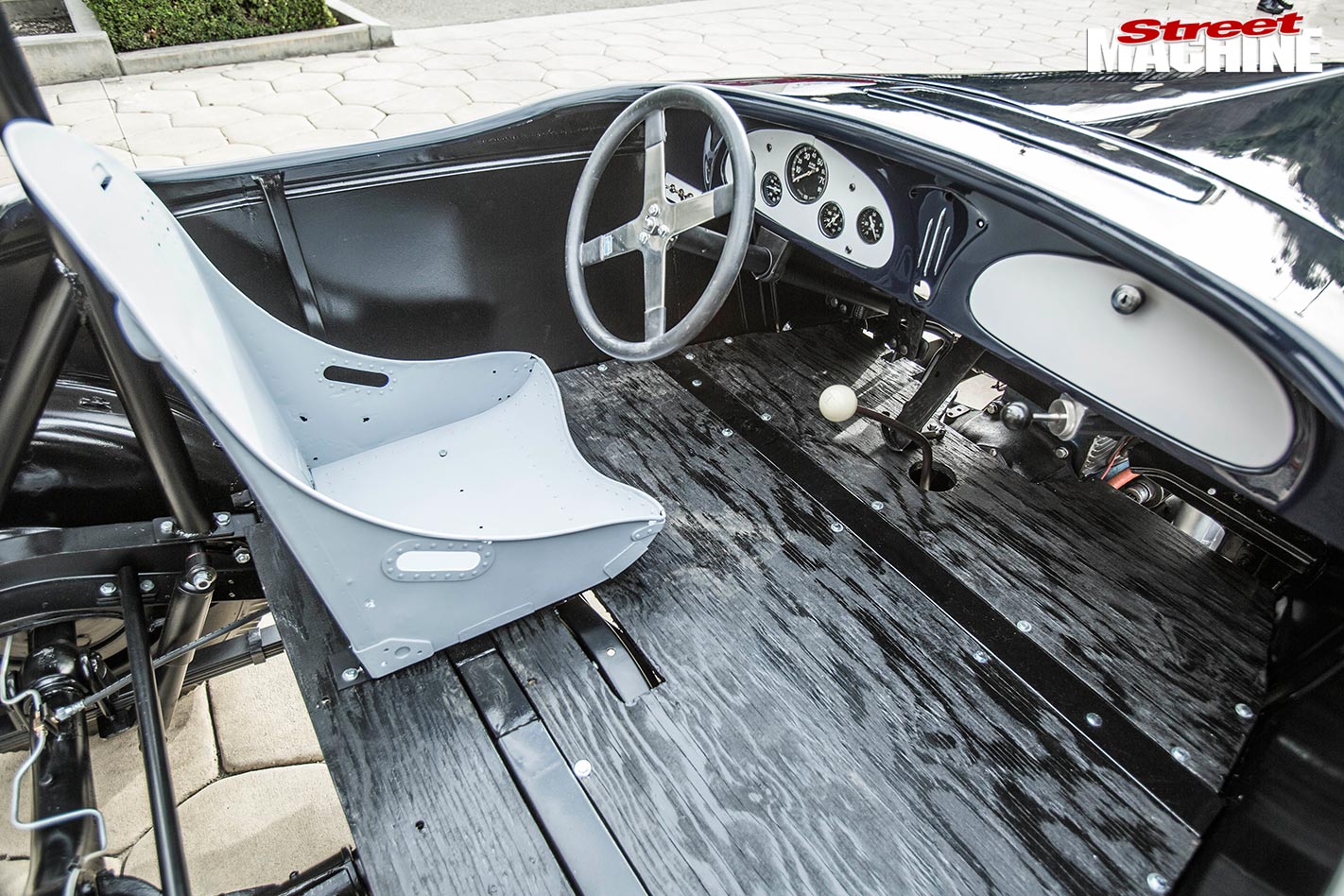 It’s spartan in here, to say the least. A stripped-out WWII bomber seat is held off the ground by a few wooden planks. Stewart Warner gauges are fitted into a ’34 Chevy Deluxe dash, crowned by a fourspoke Schroeder race wheel. Within arm’s reach is the shifter for the three-speed 40s truck ’box, minus crawl gear

After taking it to The Race Of Gentlemen later on that year, the guys took it home and finally finished it in time for the 2015 Grand National Roadster Show. “It came out better than any of us had planned, and definitely better than what Cal had planned,” Mike laughs. “If Cal had his way we would’ve probably just put [the engine] on a dragster chassis and gone racing.” 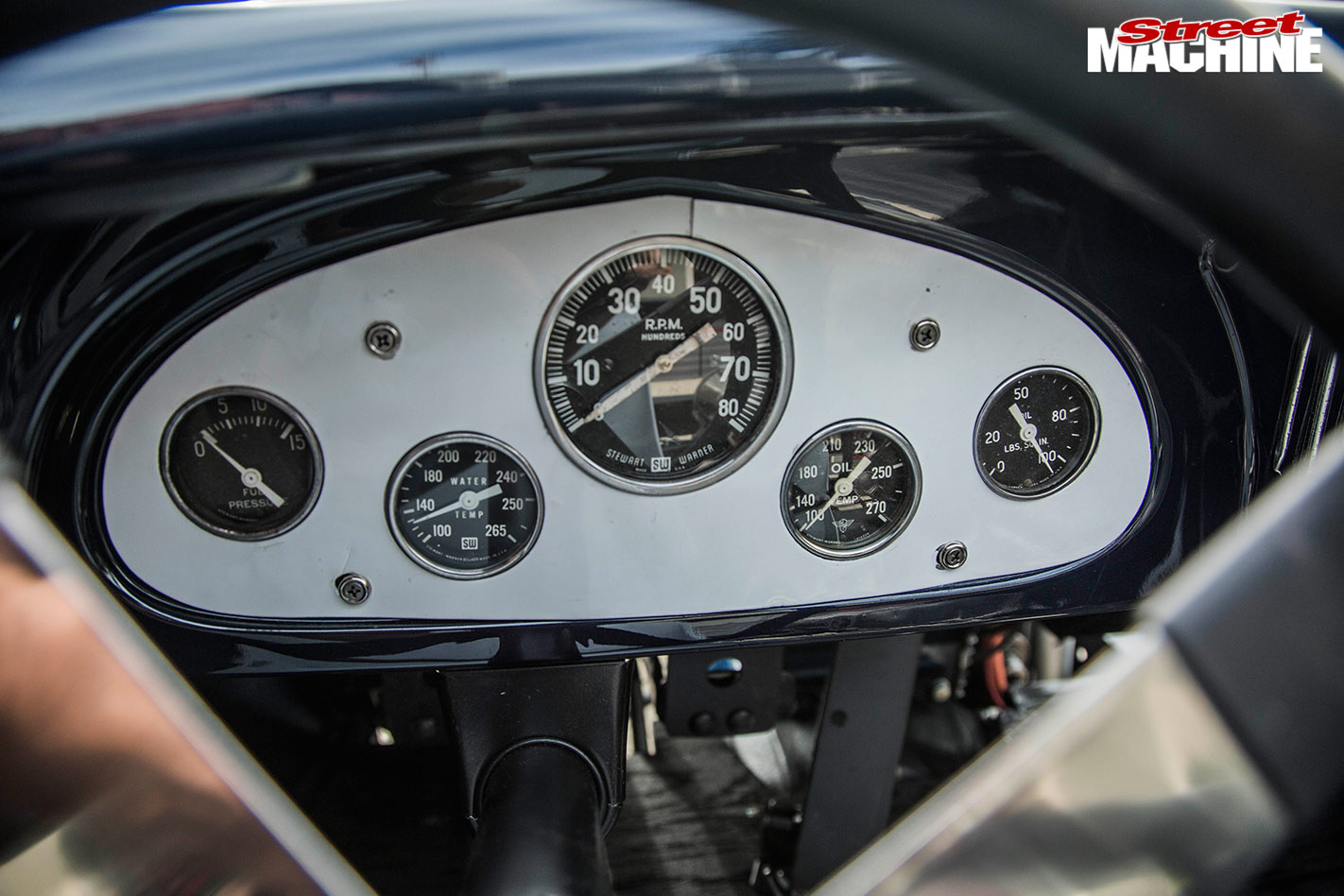 Mike, Cal and the crew at Nick’s Garage have now taken the car across the country. It’s been raced on the beach in New Jersey, shined up for shows in California, run up the Hot Rod Hillclimb and down dirt drag strips in Colorado. 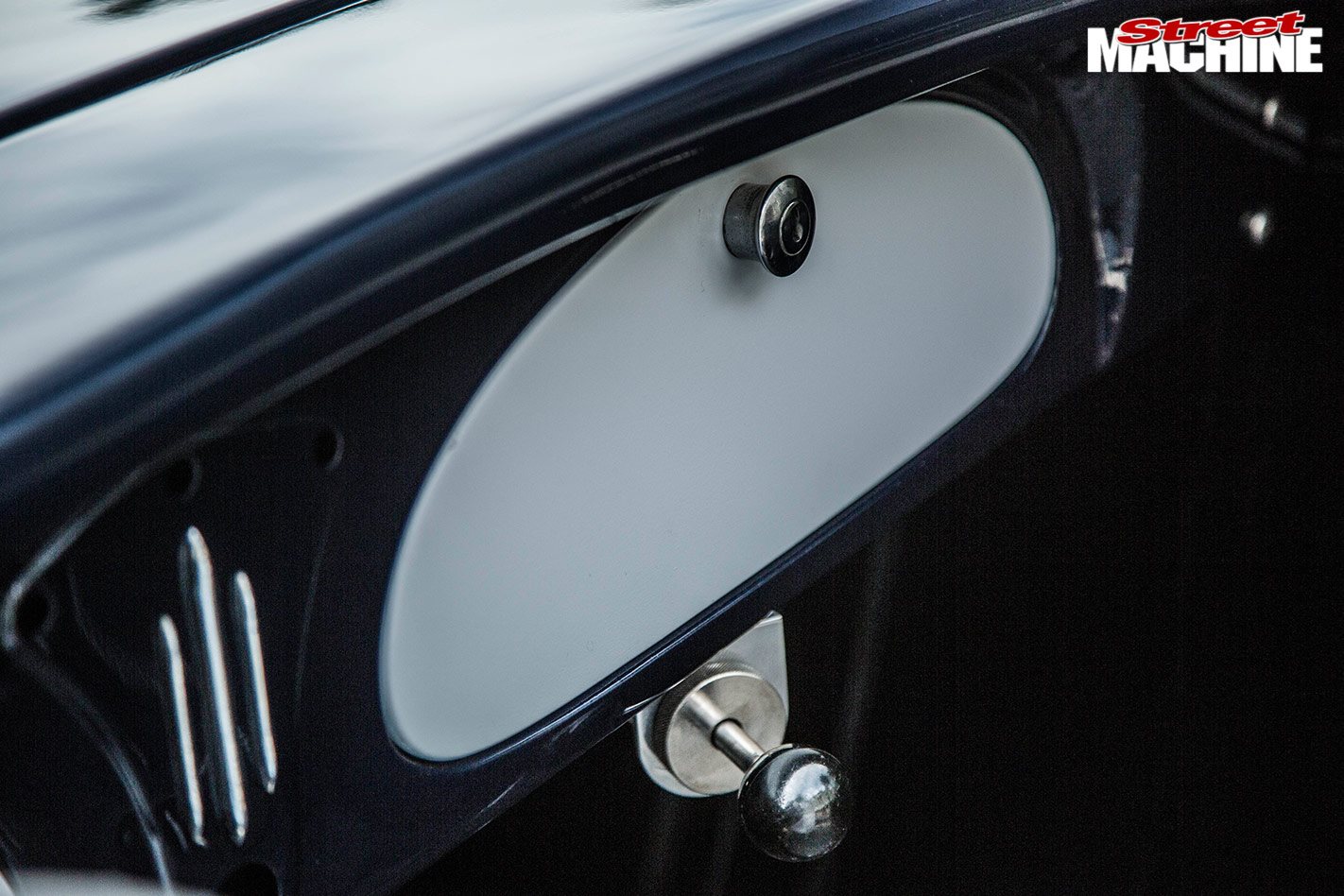 “It gets used, and we want everyone to enjoy it,” Mike says. “It took a lot of work and a lot of guys, but it brought a community together in Colorado. Cal has been telling stories about this Chev for years and to be able to have it together and running is great. Dave had never heard the motor run, and neither had Cal’s son. It’s been worth every bloody knuckle and dollar spent.” 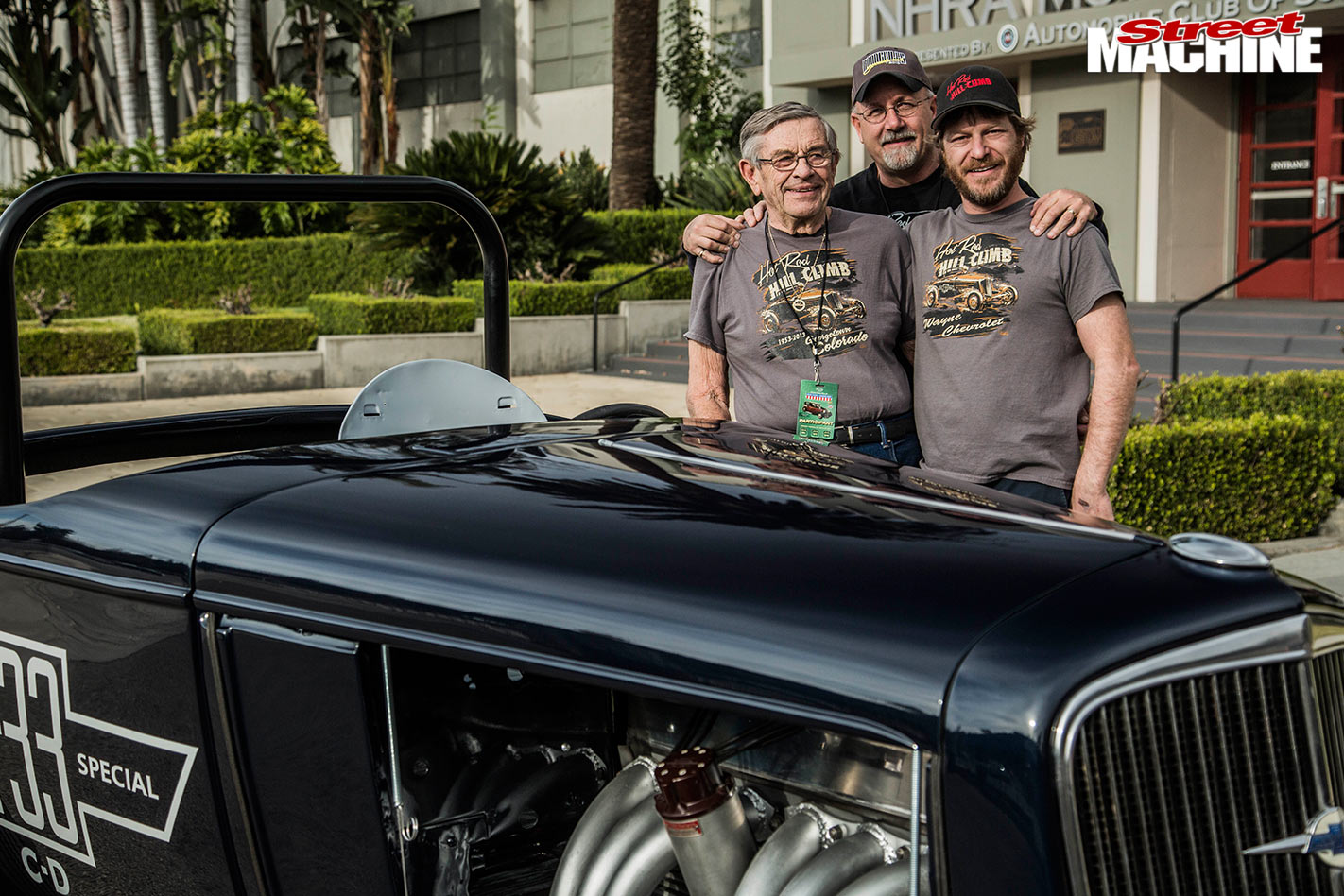 (L-R) Cal Kennedy, one of the original builders and racers of the T-33; Dave Scroggs, son of Don Scroggs, who raced the car with Cal in the 50s; Mike Nicholas, owner of Nick’s Garage and builder of the new T-33

Cak Kennedy and Don Scroggs met in the early 50s, bonding over their love and knowledge of Chevrolets. Soon they were racing a 1936 Chevy pick-up they had spotted locally, powered by the engine from Cal’s ’41 Chevy coupe. In 1953 Cal purchased a ’34 Chevy roadster body – for a whopping five dollars – and they set about moving the engine rearward a quarter of the wheelbase, channelling the body and sectioning it vertically. The car became well known at local drags and races, including the Hot Rod Hillclimb. 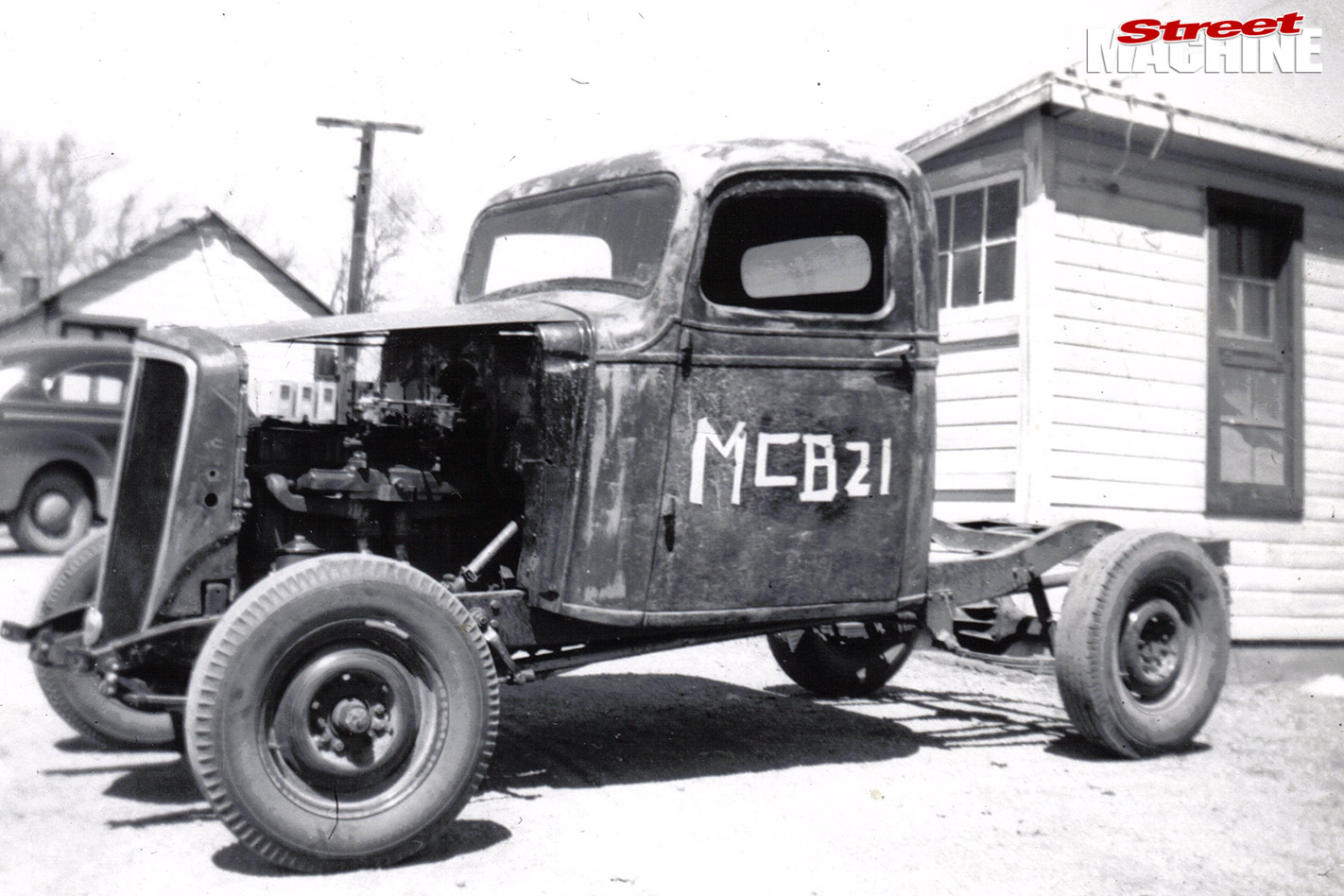 Cal and Don were able to make a deal on a round-track car campaigned by Ricketts Brothers Chevrolet. The car came with a full-race Wayne 12-port Chevy in-line six, and Cal and Don believed that as the engine was smaller than the Warner-built GMCs, it would put out more horsepower and spin to higher revs in the T-33. Once fitted to the car, the boys were able to take the ‘B’ Open Class win at the 1954 Hot Rod Hillclimb, with a time of 2:45.52. They also raced in the Drag Safari of 1955 at the Lowry Air Force Base, and the car was featured in the September 1955 issue of Hot Rod magazine. The car was run on nitro between 1956 and 1958 in dragster form, with the motor moved further back and the seat behind the rear axle. Winning Top Eliminator in 1958 saw the end of the T-33’s race days – until now. 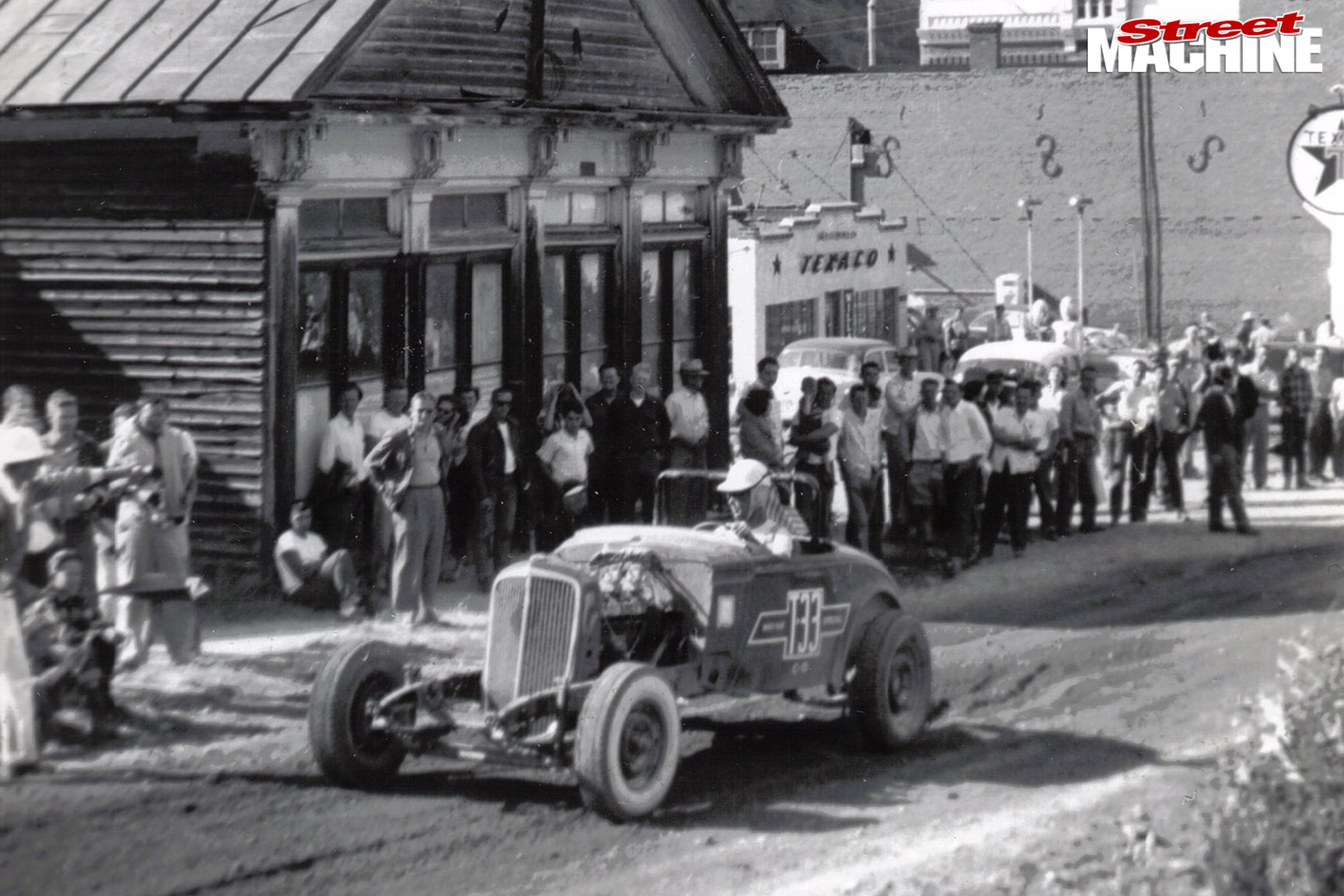 Wayne F Horning was an innovator in performance Chevrolet engines in the 1940s. At the time, Ford’s flathead V8 was the most popular option for hot rodders, but Horning saw that the overhead valves of the in-line six-cylinder Chev engine gave it a fundamental advantage, and developed a cast-iron head that would have individual intake and exhaust ports for each cylinder, dramatically increasing power output. These were manufactured in the mid-40s under Western Mechanical Development Company. 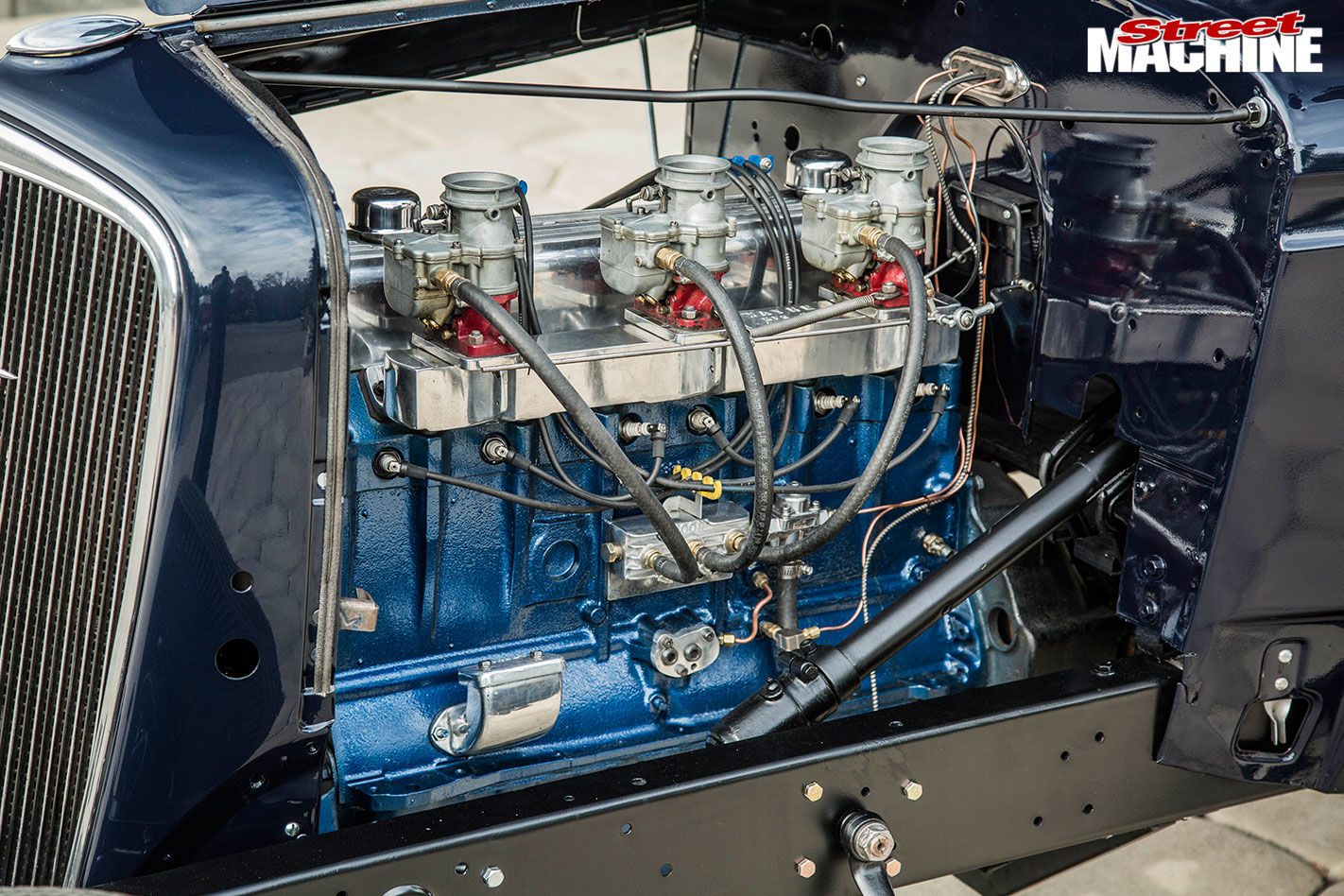 Horning set out to build ready-to-race engines using the head he had developed, by fi rst boring out standard 235ci 40s Chevy truck engines to 248ci and stuffing them with a heap of readily available parts. 331 Cadillac valves, Buick rocker arms and Chevrolet springs formed most of the valvetrain, and with the help of Frank Venolia, Horning designed new domed aluminium pistons to increase the compression ratio to a whopping 14:1. GMC truck rods and a cross-drilled Chevy crank rounded out the engine’s internals, and the combination of these elements allowed an output of around one horsepower per cube – something the fl athead Fords struggled to match at the time! The first Wayne engine went into a boat, but it wasn’t long before they made it into racecars. 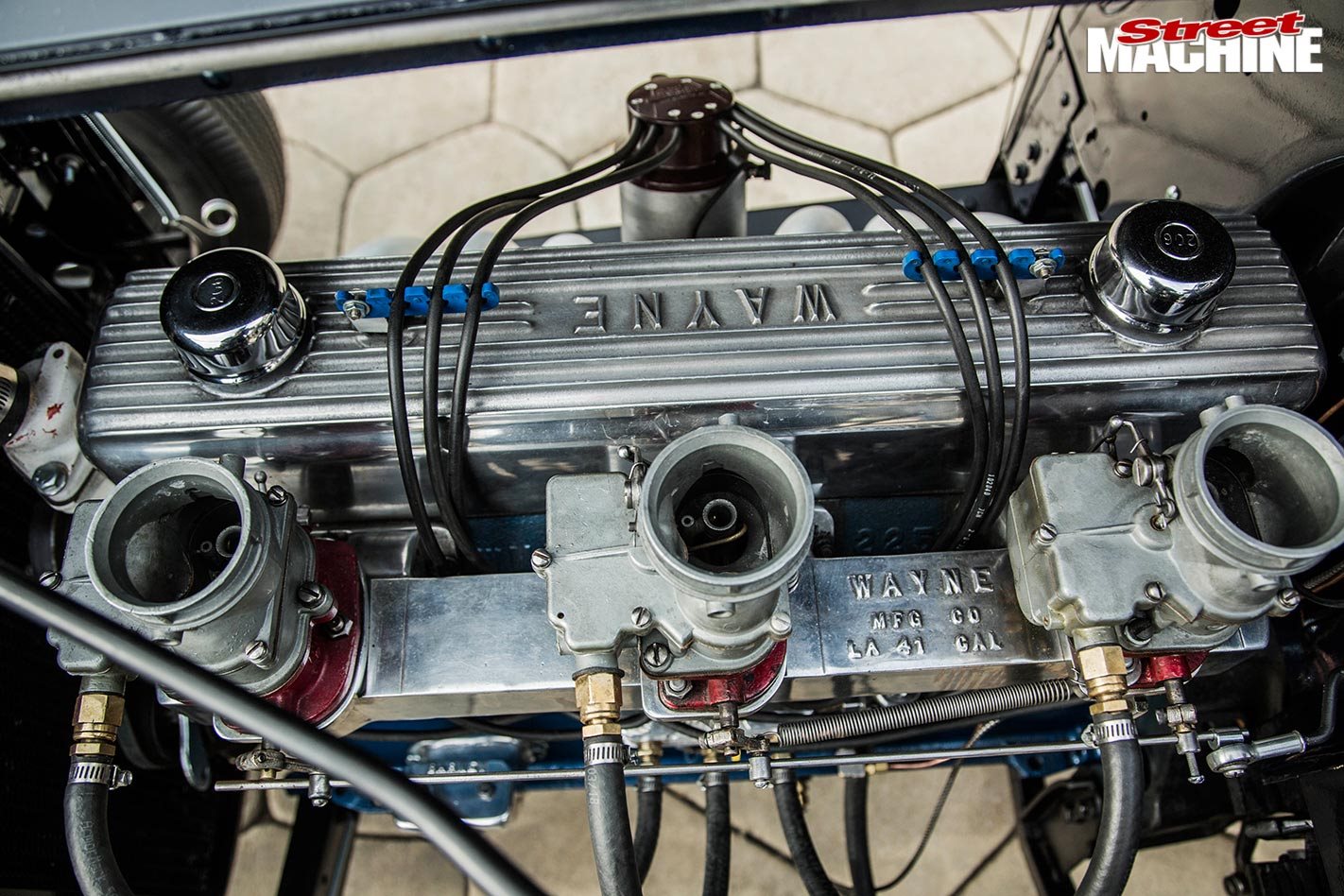 1948 would see the Class B Lakester SCTA record broken by the Wayne 12-port-equipped roadster of Johnny Hartman, clocking 147.24mph through the traps. Later on, Marvin Lee’s ‘City of Pasadena’ Class B streamliner would go over 160mph with a Wayne engine at Bonneville. 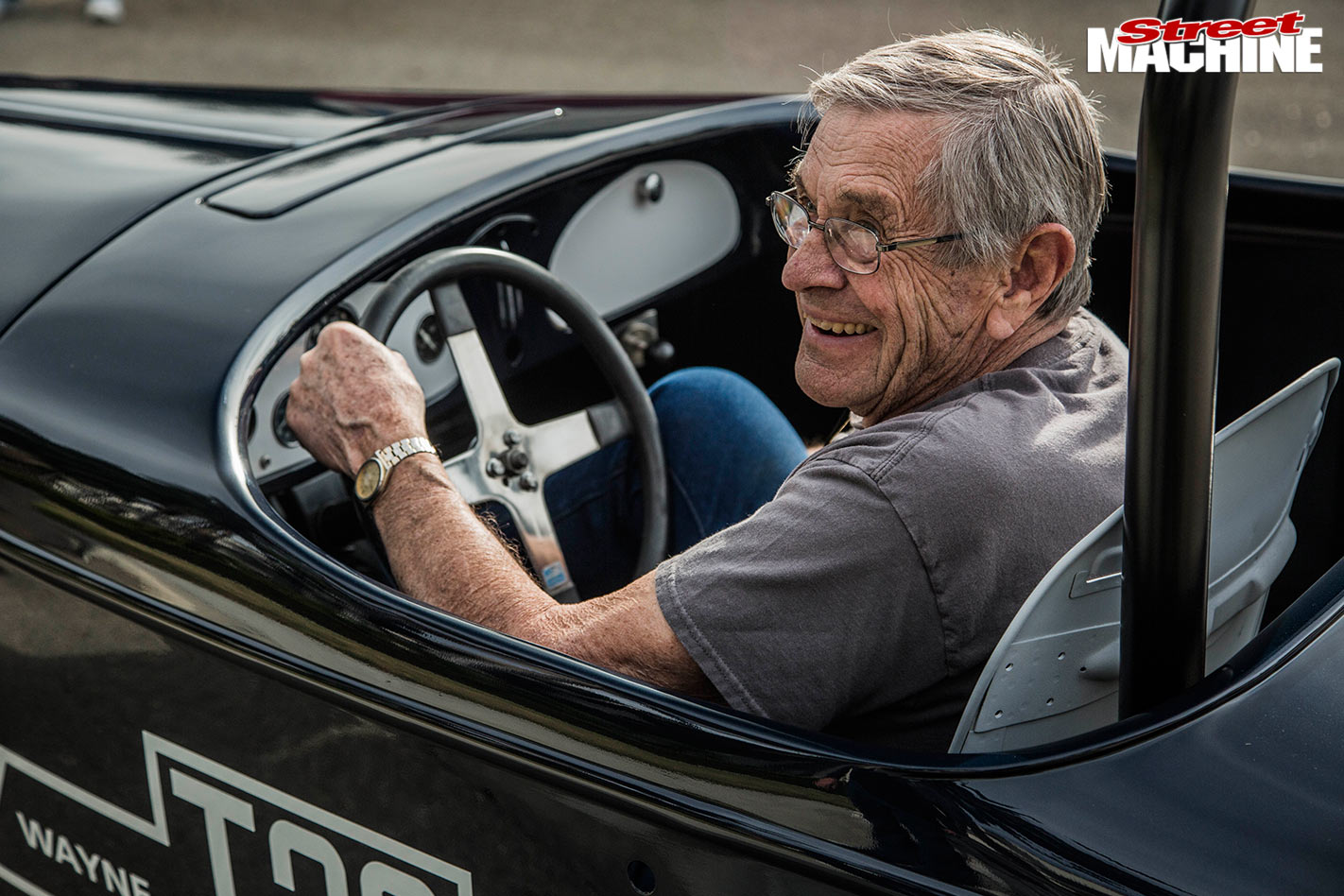