This article on Peter's Ford Tudor was originally published in issue no.17 of Street Machine's Hot Rod magazine, 2016

AFTER debuting at Summernats in 2008, Peter Elliot’s previous build (a swoopy, teal and silver ’37 roadster nicknamed OBSESSION) went on to win just about everything worth winning, including Meguiar’s MotorEx Best of Breed Hot Rod. “I was really proud of my Best of Breed win,” says Peter.

Time stands still for no man, having achieved everything he wanted to win, OBSESSION went to a new home, leaving Peter to tinker with some late model machinery from the 50s and 60s. In 2011, Peter succumbed to the temptation of adding a fresh hot rod to the garage — something more family friendly this time around. “The original intention was to keep things simple,” says Peter, “It was built as a driver!”

Hmm, a driver that made the Super Six at MotorEx on debut, cleaned up seven trophies at the Victorian Hot Rod Show — including the top award, Australia’s Coolest Ride — before repeating the effort again at the Brisbane Hot Rod Show, where it took out the Milty Award.

How does Peter do it? He has this wonderful philosophy: “I find hot rods easy to build. Every time you have a piece in your hand, you finish that piece as best as possible before bolting it on.” See, simplicity itself!

The three-year build started with an order for a Deuce Customs body with three-inch chop and matching Rod City chassis. When filling out the chassis order form, the IFS, stainless arms, manual rack ’n’ pinion, two inch step-in, two inch kick-up and four-link rear with Panhard-bar option boxes all got a tick. Between the rear wheels is a Currie 9-inch with alloy pumpkin. For the sake of cosmetics and strength, Lakes Hot Rod Parts cast-steel brackets were utilised for the coilovers and four-link set-up.

To give SIMPLICITY plenty of rake and attitude, there are 20x10 Budnik GTB billets on the rear and matching 16x6s up front. “It’s a hot rod,” says Peter, “It’s got to have sidewall and proper rake.”

That stunning red paint is one of the first things that hits you. Pat O’Shea from Pat’s Pro Restos spent six solid months just on the gorgeous paint, which is a custom mix of HOK Brandywine. Every panel was primed and rubbed twice. Another big chunk of that time was spent buffing. “There’s not one painted piece on this car that hasn’t been colour sanded and buffed,” says Peter, “the chassis, the underside of panels, the underside of the floor, everything!”

Paul Kelly was one of the masters behind OBSESSION, he’s also had a very big hand in SIMPLICITY, having completed all the bodywork, along with numerous body mods. A few of these include; flushed fuel filler into the centre of the body to clean up the valance panel, reshaped running boards to hug the stepped-in chassis, flush fitting front screen and reversed inner guard lip so they flush-mount on top the chassis rail. As fiberglass bodies go, Deuce Customs are up there with the best, however to get the ’34 into trophy-winning form took Paul a mountain of hours.

Powering the red trophy magnet is a tough, yet sensible 383 small-block Chev. The factory block lived at Pete’s business, Hot Spot Radiators, for many, many months. “Whenever I had some spare time, I’d break out the die grinder and do some deburring,” says Pete. Screwed together by Mark and Gary Oppermann (who also handled the electricals ), the 383’s insides is a who’s who of go-fast bits, including; Comp roller cam, SRP pistons, Scat rods and crank, plus a Victor Jnr inlet manifold and 850 Holley.

Having purchased a steel Rootlieb bonnet and sides out of the states, the hood had to be heavily modified and new sides had to be made from scratch as nothing fitted up to the Aussie Deuce Customs body

To get the most out of all this good gear, is a pair of CNC-ported AFR 227 heads. Not that you’d recognise them, as the AFR logo at either end was deliberately polished out to give them a silky, smooth finish. Except for the extractors, alternator set-up and cylinder heads, everything else on the engine, along with the velvety-smooth Precise Automatics TH350, is painted a contrasting HOK satin Root Beer. Peter acknowledges satin finishes might be on the way out in Australia, however he thinks having contrast is a must. “If everything was shiny and red, it would look shit,” says Peter.

Putting the whoa on things are XR6 Falcon 330mm rotors and four-piston calipers up front and EL discs in the rear. The EL’s internal handbrake mechanism keeps things neat and sweet. John Finch is the man behind those precision-bent brake lines highlighted in the chassis shots. Pedal flex is non-existent thanks to the cast brake pedal, topped with a Billet Specialties pad. All the lines in addition to all the fittings are polished stainless. As for the manual steering: “The steering is never heavy,” says Peter, “it’s straight out of the column and into the rack.”

Despite having picked up two top interior awards, the interior is really quite simple — it’s just really well put together. The front seats are radically modified buckets out of a Japanese car, while the rears were made from scratch. The front windows are manual, operated by Billet Specialties handles that match the door cranks.

Peter made those aluminium door inlays himself. After fashioning a driver and passenger-side jig, the alloy rod was bent to shape, then drilled and tapped every 100mm. Studs were Loctite’d into place to securely fix them to the door cards. One of the 3-3/4 inch Classic Instruments gauges houses the speedo and tacho, while the quad-gauge next to it incorporates, fuel, water, oil pressure and volts — the two gauges even include blinker and high-beam tell-tale lights.

Being a ‘driver’, SIMPLICITY has been fully Dynamat’d with foam underfelt beneath the Mercedes carpet. Other than the painted dash and floor carpets, Tony Cairns swathed everything else, including the roof lining, in light tan leather.

While there’s more paint than polish on SIMPLICITY, the polish work is truly incredible and looks a million dollars against the stunning red. “I do all the little stuff myself,” says Peter, “all the major stuff like the diff housing I farm out to Brian at Prestige Metal Polishing. He’s always been really good to me.”

Peter made fibreglass panels to fit around the bases of the radically modified seats, for a neater finish and to conceal the runner mechanisms

Some of the many, many hours Peter spent ‘on the wheel’, included the painstaking process of taking the hundreds of ARP 12-point stainless bolts used throughput, machining the head smooth before polishing them to perfection. Now that’s attention to detail!

It may have started as a driver, however even Peter admits the level of detail and workmanship have gone well beyond his original intentions. “I can’t get the shiny shit out of my head,” says Peter, “once I start I can’t stop.”

For legality sake, chrome plating was a no-no for all the critical steel components. They’ve been ceramic coated by Competition Coatings. Mind you they were polished to a chrome-like finish before being sent off for coating.

All-in-all the three-year build was pretty intense with everything coming together just in time for Meguiar’s MotorEx Sydney. “I’m glad we got a wild card at MotorEx,” says Peter, “It was the best of both worlds, we got to be unveiled and also go for Grand Master. To me we tried to build it simple. It’s not really an over-the-top car, it’s just detailed well.”

Looking at its massive trophy haul, there’s no arguing SIMPLICITY has got class to spare. As for building something more family oriented — funny story; the kids have grown into tall teenagers, they don’t fit in the back due to reduced headroom from the chassis kick-up! I wonder if there’s a four-seat cabriolet in Peter’s future? Watch this space. 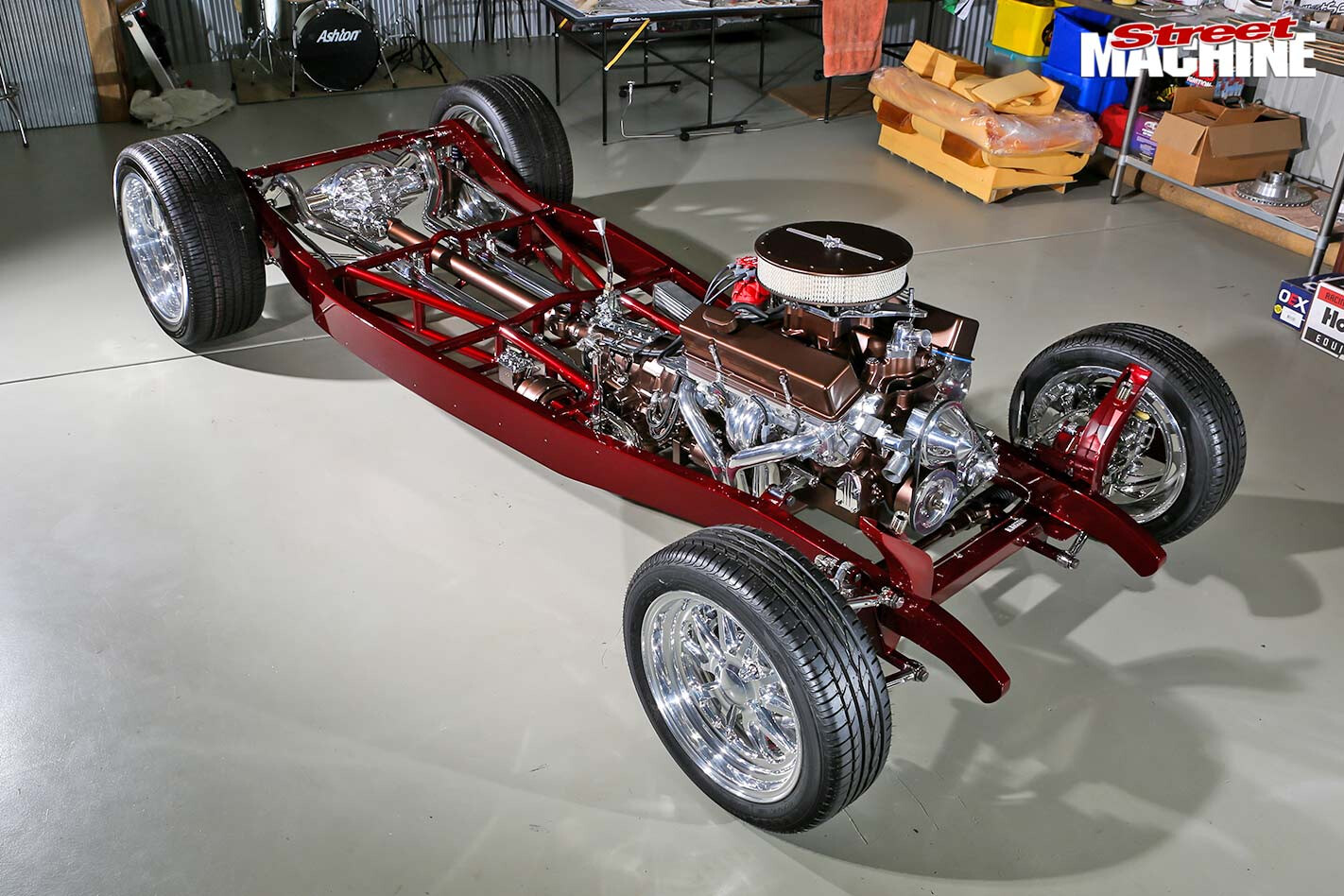 1. Except for the polished cylinder heads, everything on the engine is painted satin HOK Root Beer, which contrasts nicely with the vibrant red. Custom block-hugger headers are a work of art, while the billet mechanical water pump is pure horn. Pat O'Shea spent many hours filling and sanding to get the rails that ripple free. Lack of power-steering and a/c is in keeping with the simplicity theme. 2. It’s a crying shame all this beauty is covered by a body. The steel diff yoke was ceramic coated to match the incredibly polished Currie housing – which was modified to accept button-head cap screws. Note the deburred tailshaft yoke and the quality of the reflections in the sides of the smoothed chassis rails. And that tall cushy bump stop under the rail will give SIMPLICITY a very supple ride. 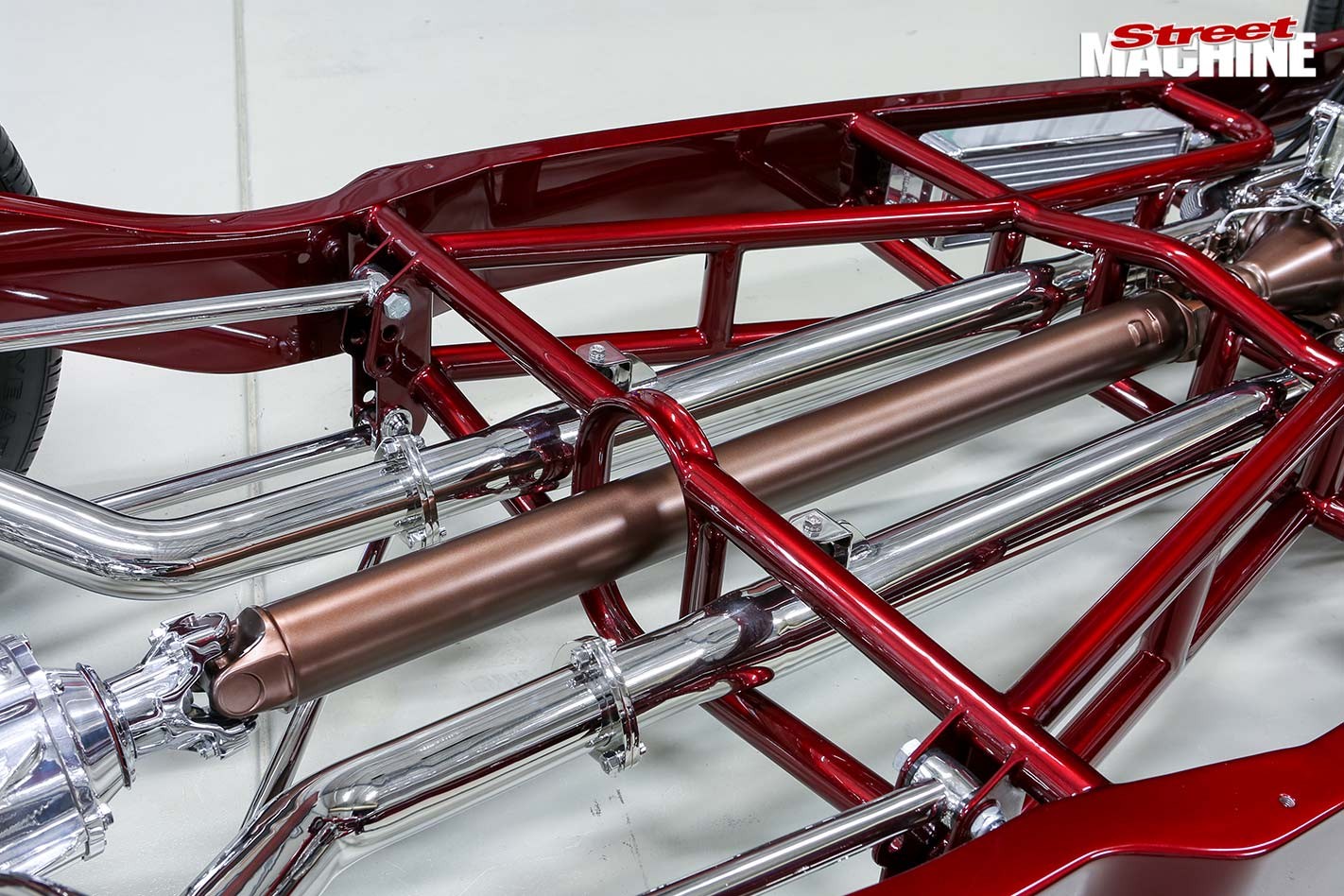 3. The two inch rear step-in is really noticeable here. While the custom extractors (made by Rapid Fabrication) are coated, Peter made the rest of the exhaust system from a 316 stainless steel bend kit which was TIG welded together and polished to perfection. Did you spot the mufflers? They’re Spiral mufflers that hide inside the enlarged pipe that finishes at the rear tailshaft loop. 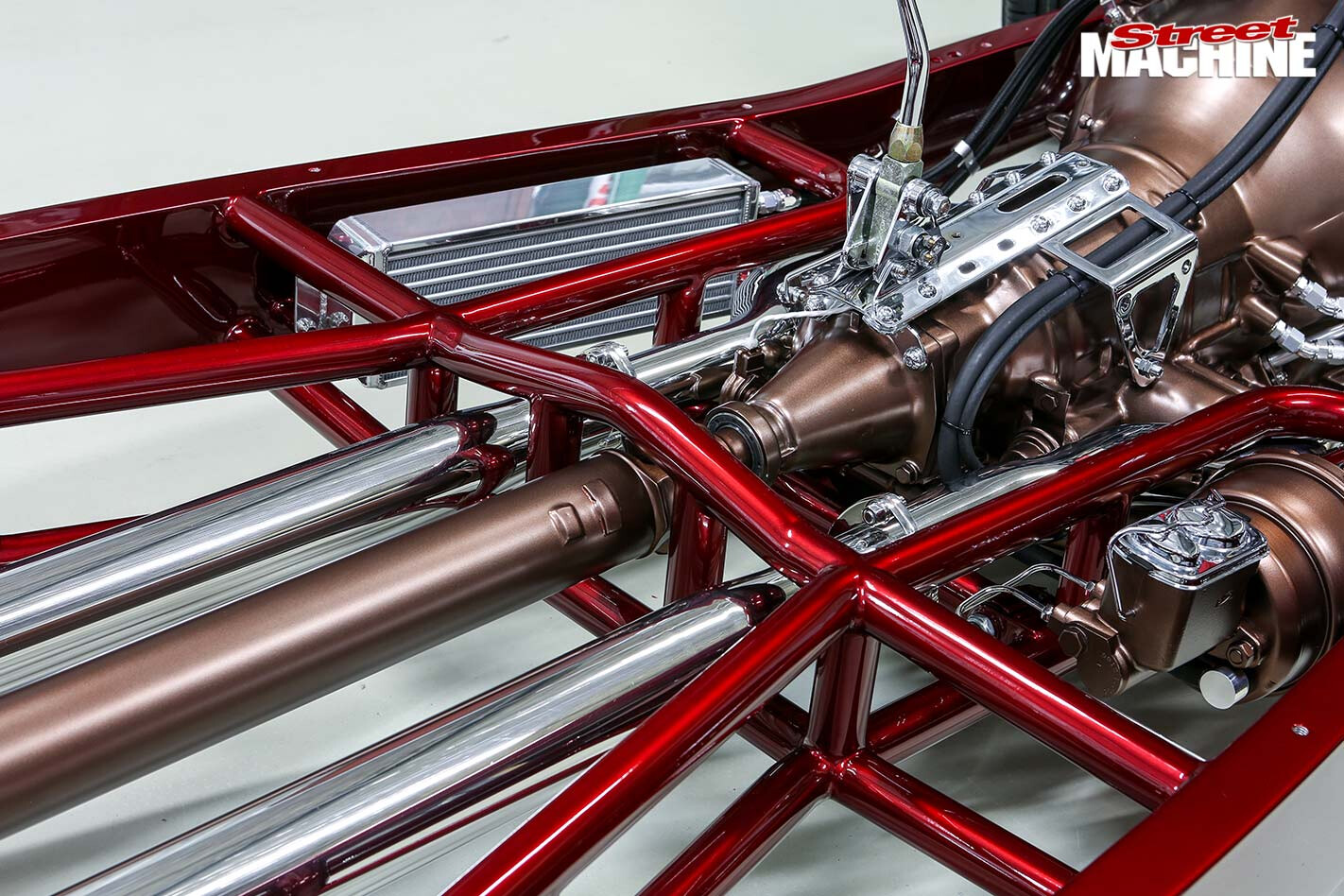 4. When was the last time you saw a smoothed and chromed Lokar shift bracketry? TH350 gearboxes, Falcon master cylinders and double-diaphragm, 8-inch boosters don’t look that slick fresh out of the box. Every hose is terminated with a proper AN aircraft fitting — mirror polished, of course. As for the monster PWR trans cooler. “I hate things getting hot,’ says Peter. Nailed it! 5. There does one start? Although they look chromed, critical componentry, like the coil springs and brake rotors are actually ceramic coated by Competition Coatings. Everything else is either polished stainless (A-arms, stub axles steering arms, brake hard-lines and brake fittings) or polished alloy. The bung at the top centre serves as guard-support, headlight mount and wiring concealer.

Following a tidy ’32 3-window coupe that was a previous Meguiar’s Superstar, Peter stepped things up with a full-on super-elite build. Starting with a Wild Rods body and a ’37 Ford chassis, Peter and his crew honed it into one of Australia’s best ever rods, again featuring scads of fabrication and artistry by Paul Kelly. On debut at Summernats in 2008, the ’37 roadster picked up 11 elite awards — which remains an unbeaten record to this day. Peter was also chuffed at taking out Best of Breed Hot Rod and MotorEx in 2008. Troy Trepanier was suitably impressed, commenting on the quality of workmanship after spending considerable time going over the entire car.