IN 2006 I was sitting in Perth airport and bought Just Cars to kill time and came across a ’37 cabriolet unfinished project,” recalls Pete. “In the 90s, I built a ’37 Chevy convertible for a mate and thought at the time I wouldn’t mind one of those. So spotting this perked my interest. After touching down at Tullamarine, I jumped on the phone and organised an inspection the following day.”

The Headlights are actually for a ’41 Willys and feature an inbuilt blinker. They fit into the ’37’s stainless bezel with no gaps or screws showing, while the grille is a repro item from Speedway Motors

It was the perfect project and Pete wanted it. “I tried to haggle him down,” says Pete, “but three other blokes rang while I was there.” So full freight it was! 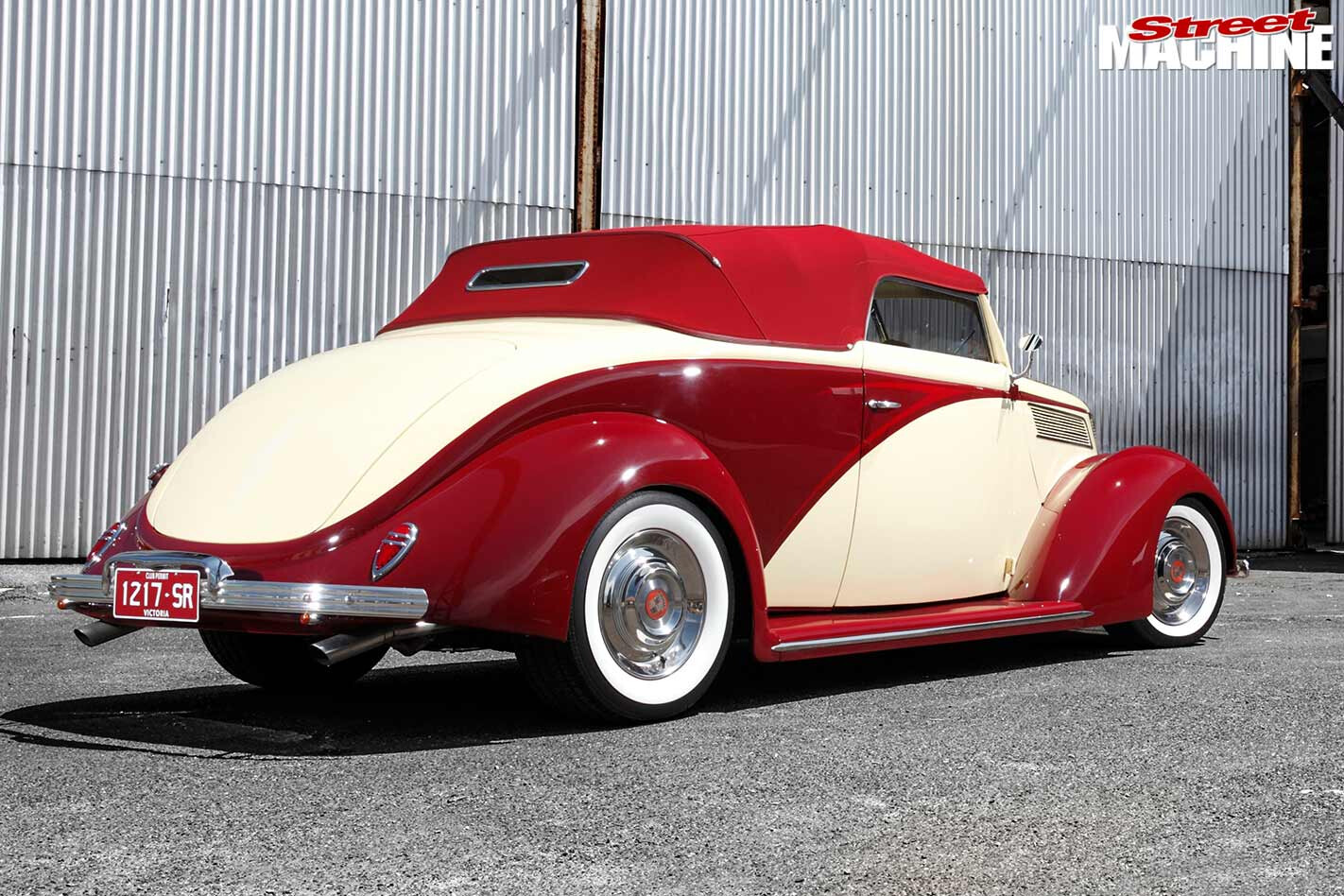 Front and rear bars were custom made by Briz in the states. The rear one was finished off with an FC Holden number plate surround, which Pete picked up at a Ballarat swap meet. Metal Esky is a new Art Deco unit which Coastal Signs painted up to match the car

To accommodate the EFI, Pete opted for a fuel tank from American company, Tanks, Inc. It’s specifically manufactured to accommodate EFI and accepts a modern, in-tank pump. “I didn’t have to modify it in any way,” says Pete.

Next up; the body, which was original but very rough. “Extensive rust in convertibles and cabriolets is typical,” says Pete, “they stop running, owners then leave them sitting outside for years and once the top rots away, the rain gets in and all the metal from the firewall back rusts away.”

Those elegant side mirrors are actually Arlen Ness aftermarket motorbike mirrors. “I spotted them when I toured his museum during my US trip,” recalls Pete, “I though they’d be perfect and grabbed a pair.”

While not a basket case, the ’37 did have a lot of rust and took a lot of time to rebuild. It received a recessed firewall, new floors front to rear and new rear wheel tubs. Also, Argentinean roads are a lot like Aussie outback tracks; shit! “After years of bouncing down crap roads, the body was riddled with cracks,” says Pete, “they all had to be welded and strengthened.” Burst-proof bear claw door latches were also added for peace of mind.

Although it looks relatively stock, the body has undergone several subtle changes. A couple of examples include the ¼-inch gap for the rubber sandwich which normally sits between the guards and body, as well as between the guards and running boards. “I wanted everything to mount flush. I used rolls of MIG wire and bottles of gas filling up all the gaps and making everything fit properly.”

The rear guards were also pie-cut and extended to align with the EMS beaver. The boot lid was smashed in, so Tin West hand-shaped a new inner frame and skin from flat sheet.

Pete paid plenty of attention to stance and tyre fitment. When building a car, Pete’s advice is to pick a plan and stick with it. Don’t chop ’n’ change for the latest ’n’ greatest. Otherwise the car will cost twice as much, probably never get finished and never quite look right as it ends up a mish-mash. With this in mind Pete settled on the final wheel and tyre combo early in the build. Knowing this, all four wheel arches were cut up and the diameter of each opening reduced for a nice, snug fit and to centralise the tyre in the openings. “There’s a fair bit of guessing and mathematics in this,” says Pete, “as you have to have an idea how the car will sit once assembled.” You’ve got to admit Pete’s nailed it, as the cabriolet sits super-nice over its wheels and is nicely proportioned – all at legal ride height!

Although they look like overgrown Ford lights, the taillights are in fact from a ’39 Lincoln

From the outset Pete was after an Art Deco look. “Alex Szman is far more in tune with this style than I,” said Pete. “So I got him to create a series of sketches to come up with a design that we were both happy with.” Looking at the side of the ’37, you’ll notice all the curves are consistent, with the two-tone break following the sweep of the guards. Fine tuning the bodywork and turning Alex’s artwork into reality is the handiwork of Wyndham Accident Centre. Colours are Bordeaux (1989 Rolls Royce) and Vanille (1986 Renault) to which Ryan Ford added in stripes and Art Deco scrolls.

Inside, the So-Cal Speedshop billet gauge surround features the same pearl material used on Fender guitars – it even sports the Fender logo! Either side of this trick piece are the ‘wings’ from a Chrysler 300C grille badge that Pete found at the Long Beach swap meet. It’s filled with American Nickel gauges.

Rather than go for a six-gauge bezel (which Pete felt would be too wide for the car), he grabbed a four-inch mandrel bend from the local exhaust shop and welded it to the dash to house the tacho. “It saw this done years ago,” says Pete, “I thought it would be perfect in the cabriolet.”

An extension was added to the bottom of the dash to house the vents and controls for the Vintage Air a/c. Below this is the Pioneer CD/tuner, book-ended by power window switches.

The three-inch screen and pillar chop required significant modification of the roof bows. Tape was used to create the desired profile. “I cut and welded each bow many times until they looked right,” says Pete. “I also added an extra bow to attain equal spacing.” Chopping and modifying the stainless windscreen surround and side glass mould also proved be extremely challenging. To seal the side glass, Pete modified the mould and rubber set-up from a Mustang.

After wiring the rod (including the EFI and a/c) at home, Pete carted the ’37 off to Sunshine Motor Trimming for them to perform their magic in burgundy leather with contrasting cream piping. They trimmed the floor and boot in matching burgundy carpet and covered the great-looking top in colour-matched convertible top material.

The Vortec-headed 350 is topped with a Holley  Avenger Stealth Ram injection system for some extra go and driveability. The finned top on the plenum ties in nicely with the rocker covers

The last piece in the puzzle before blasting off to numerous rod runs in his new pride ’n’ joy, was to get a VASS report by JC Bonneville, a Club Safety Inspection by the ASRF TAC then head down to VicRoads to pick up the SR plates. With great build quality and superb ride, Pete intends using up as much of the 90 days permitted under the Victorian limited rego scheme. “I’m very happy with the way it came out,” says Pete. What more could any rodder ask for?

Well known as the proprietor of Hoppers Stoppers, Peter Koning has been rodding since the 70s and has built many cars – including a ’32 Vicky that he finished in 1998, which went onto win Top Street Rod at the Melbourne Hot Rod Show. Oddly enough a ’46 Bedford van was his first effort, followed in 1982 by a chopped ’36 Chevy, four-door sedan that he still owns and loves. Along the way there’s been a couple of Mustangs, a 350-powered FJ ute and a ’55 F100. He opened the doors of Hoppers Stoppers in 1990 and semi-retired from it in 2010. Pete still owns Hoppers, however he lets the guys run the show these days.

It was at this stage that Pete loaded the ’36 Chevy sedan onto an LA-bound boat for a nine-month, 20,000-mile holiday around the US. During which, he attended numerous rod runs, shows, drags and swap meets along with plenty of typical touristy stuff. “I did it all in my Aussie, RHD street rod,” states Pete, “it was a lifetime dream.” Upon his return in 2011, Pete got back into the swing of things by joining the ASRF Vic TAC, which keeps him pretty busy when he’s not playing with cars.