WE COULD have called this yarn ‘101 clever ways to build your hot rod’ but I doubt we have enough room to get through half the modifications that have gone into this car. If you were at Summernats 21 you’d have seen it in the Elite Hall, but even in the flesh it’s unlikely you’d have been able to take in the myriad changes, the latest from Queenslander Peter Elliot. 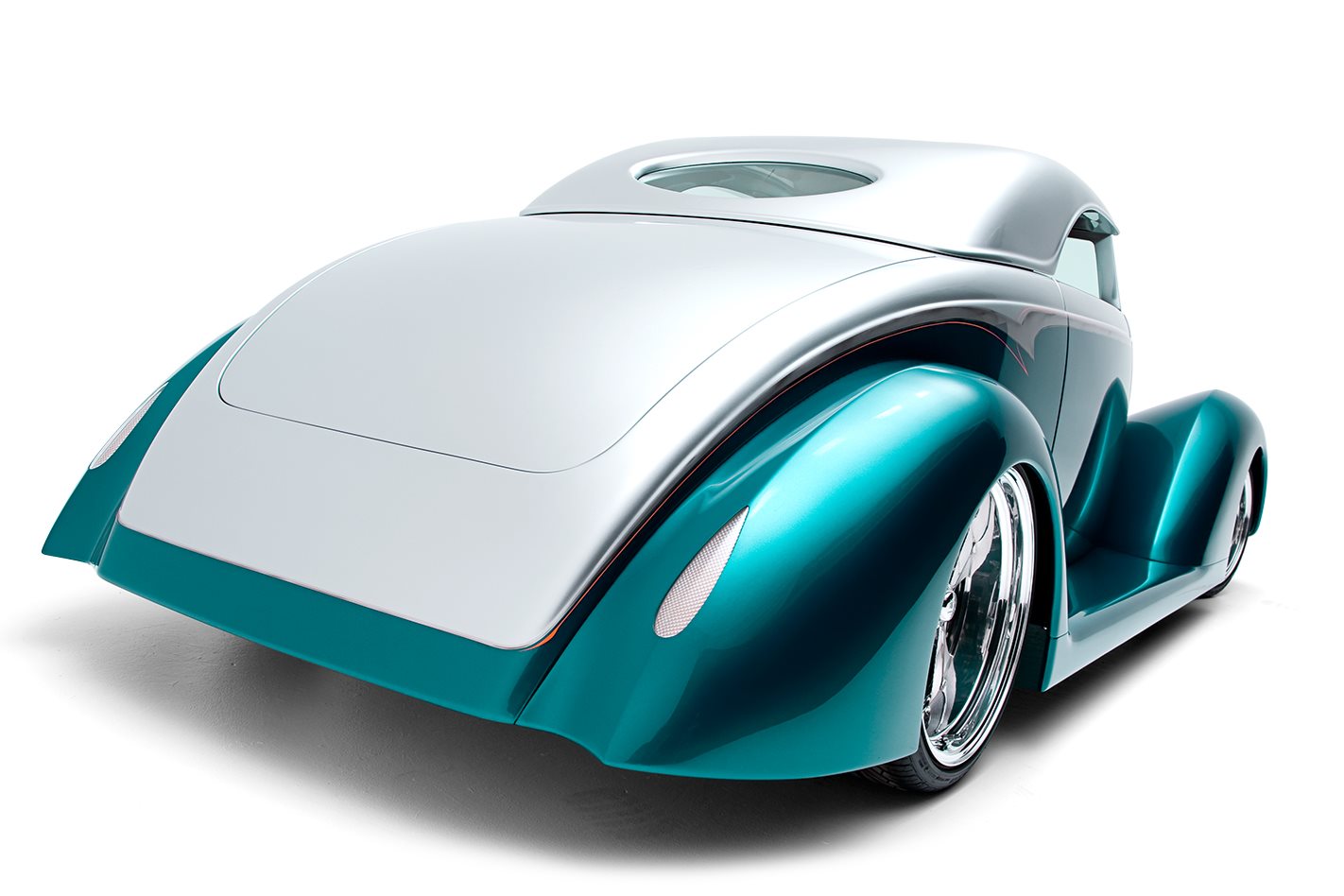 The car took out nine trophies in Elite judging, including Outstanding Engineered Hot Rod, Top Closed Hot Rod, Artistic Impression, Top Interior and a Meguiar’s Superstar nomination. So how did Pete get to the point where he’d built one of Australia’s most stunning rods? Well, it’s not the first nice car Peter’s had. Back in 2005 his ’32 Ford coupe was picked as a Meguiar’s Superstar, something he wasn’t expecting, and definitely not the reason he built the car. 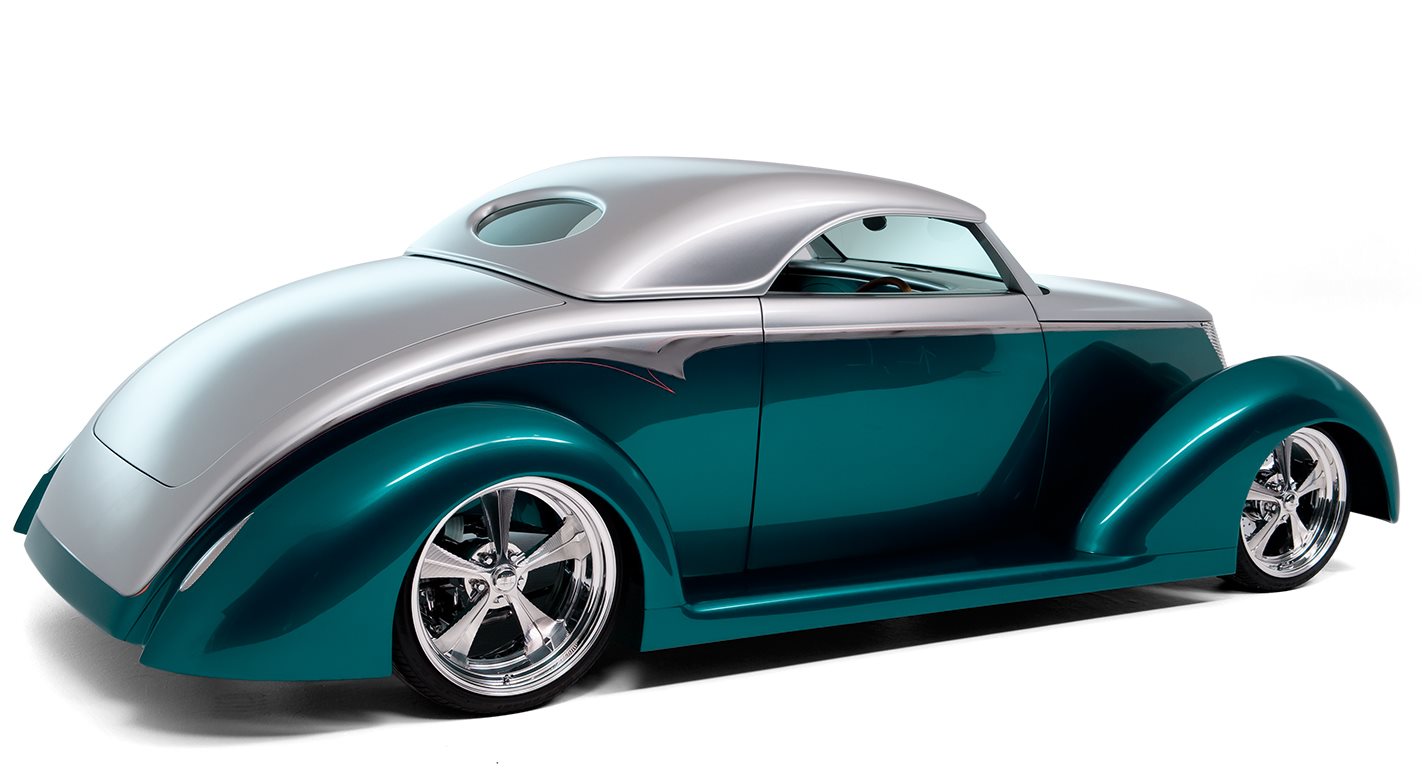 He probably won’t admit it, but that effort — a damned impressive one for a first-time build — gave him a bit of a taste for the upper echelons of car building. Within a few months, the ’32 was on its way to Melbourne to a happy new owner and Peter was in the hunt for another project. While buying a brake pedal off a fellow rodder, he spotted the Canadian-made fibreglass ’37 lurking in the background. The obvious question was asked: “Whatcha doing with the ’37?” The answer, also rather obviously, was that he was selling it. So Peter went home with a brake pedal and a brand new project. 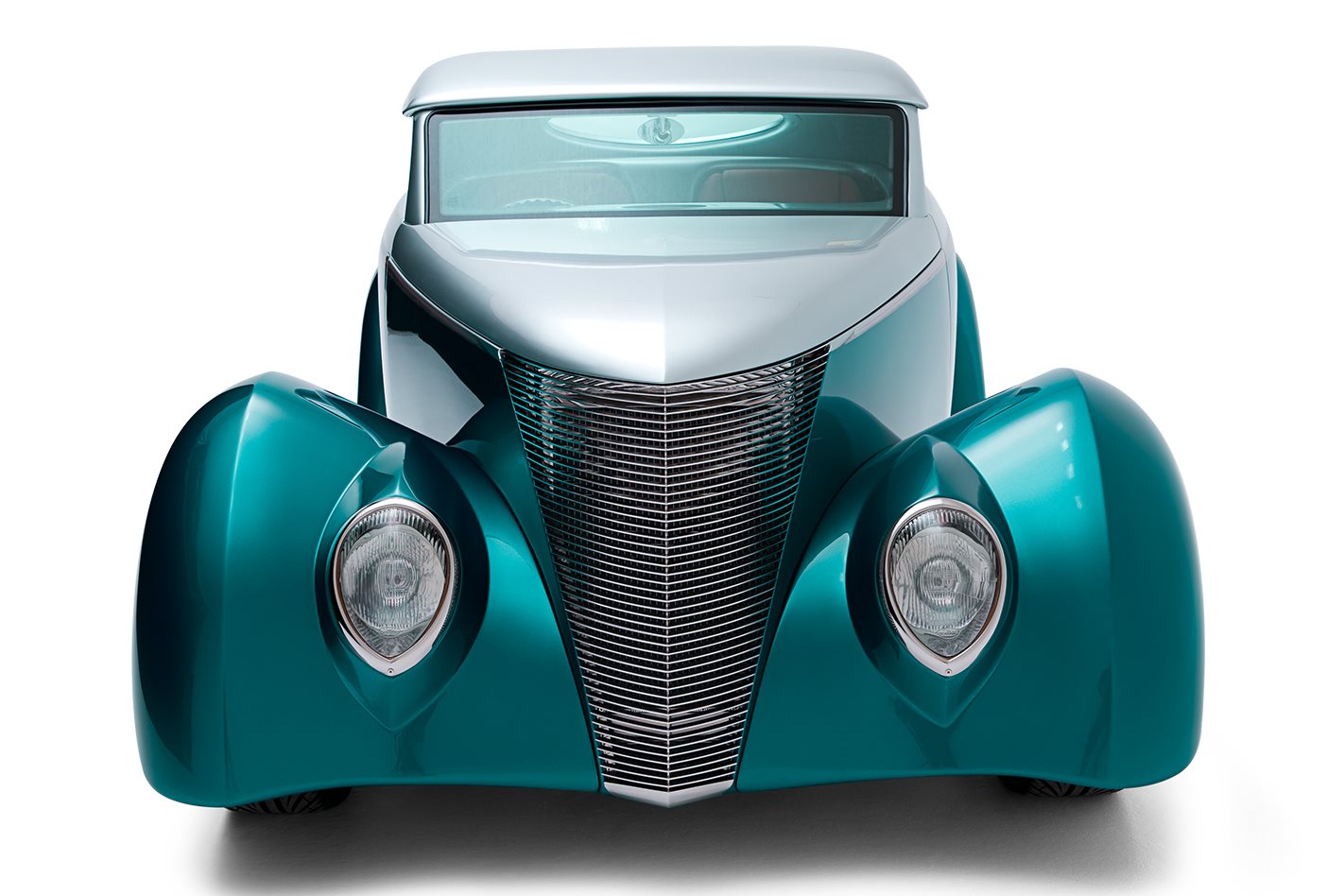 Although the car was a roller, it was far from complete. Peter had to go backwards before he could go forwards and worked with Paul Kelly from Smooth Customs (and Paul’s army of talented mates) to put things to rights.

“It had been around the scene here for a while. Those wheels were on it when I got it and it had a front and rear end in it but I changed both of them. It had an crossmember, but I changed that as well,” he says. 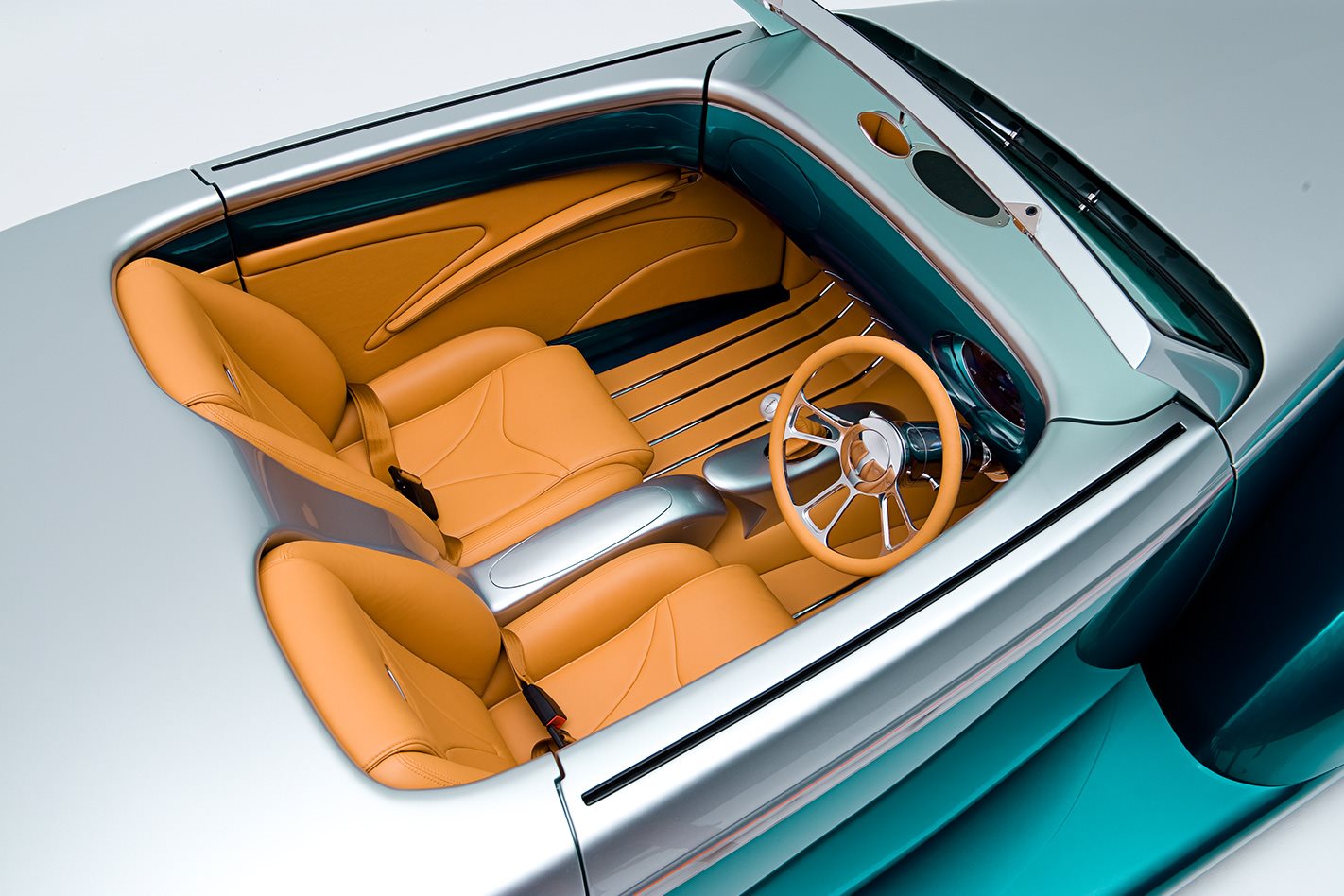 The chassis is genuine – not repro – ’35-’40 Ford, which had been fully boxed and fitted with a C-section crossmember, Jag rear and L300 front-end when Peter picked it up. That combination would have worked fine, but Peter wanted something a bit better looking. The crossmember was replaced with an elegant tube structure designed by Paul Kelly and crafted by father-and-son team Carl and Dave Hillman. Both ends of the suspension were replaced, with Rod-Tech IFS up front and Kugel Components IRS holding up the rear.

“We cut it up and modified it heavily,” Peter says, understating the effort that went into the chassis. 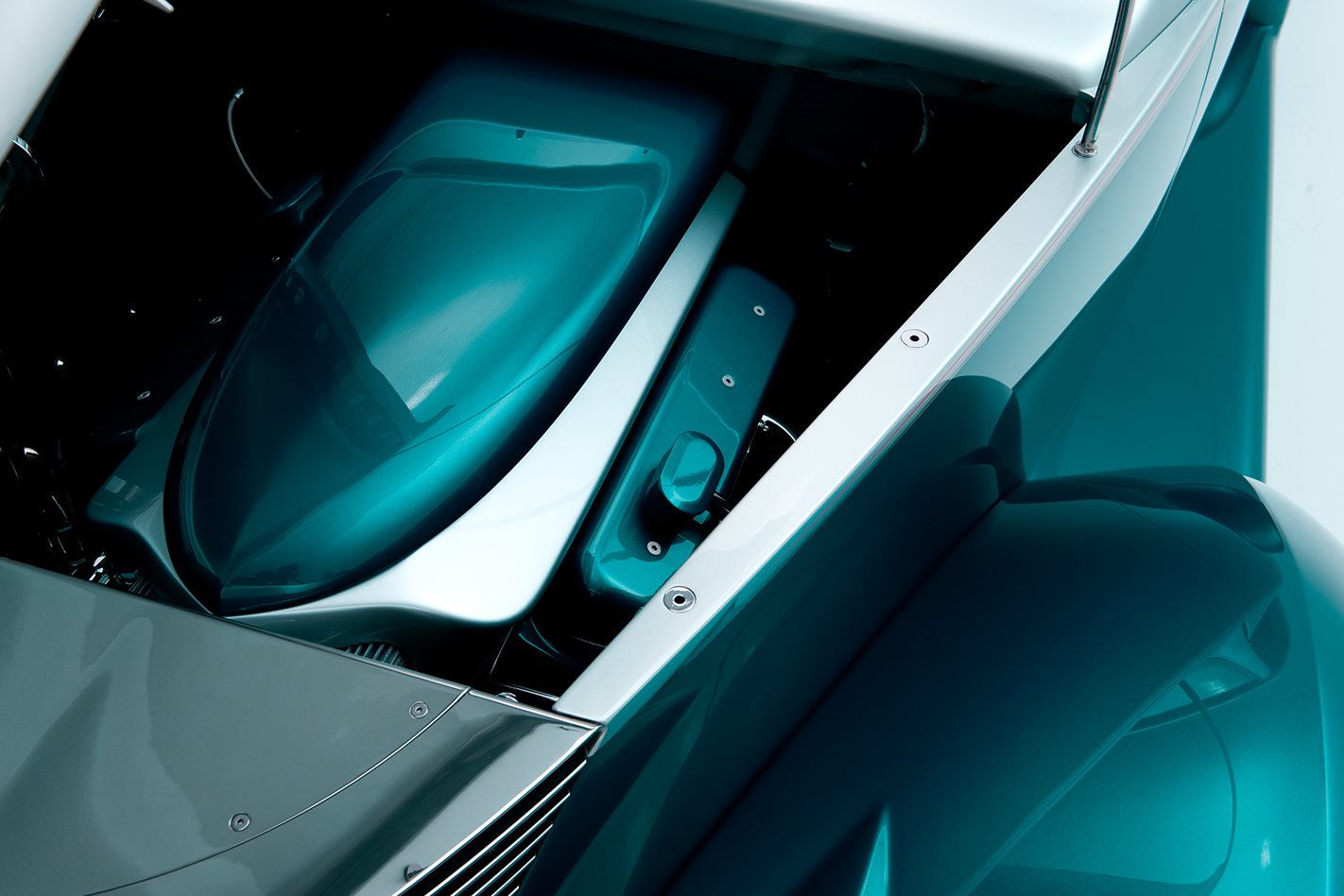 You may ask why Peter didn’t go with a Kugel front-end. “It was mainly because of the steering,” he says, “they don’t have a right-hand-drive rack. I had a Rod-Tech front-end in my last car and they built one for a ’37, so I thought I might as well buy Aussie — it’s all complied and you don’t have to worry about engineers.”

It’s also a good-looking bit of gear with the whole lot polished to a mirror-finish, as is the Kugel rear-end. In fact, if it’s not shiny then it’s probably painted one of two colours: Teal or Orion Silver, both House Of Kolor hues. 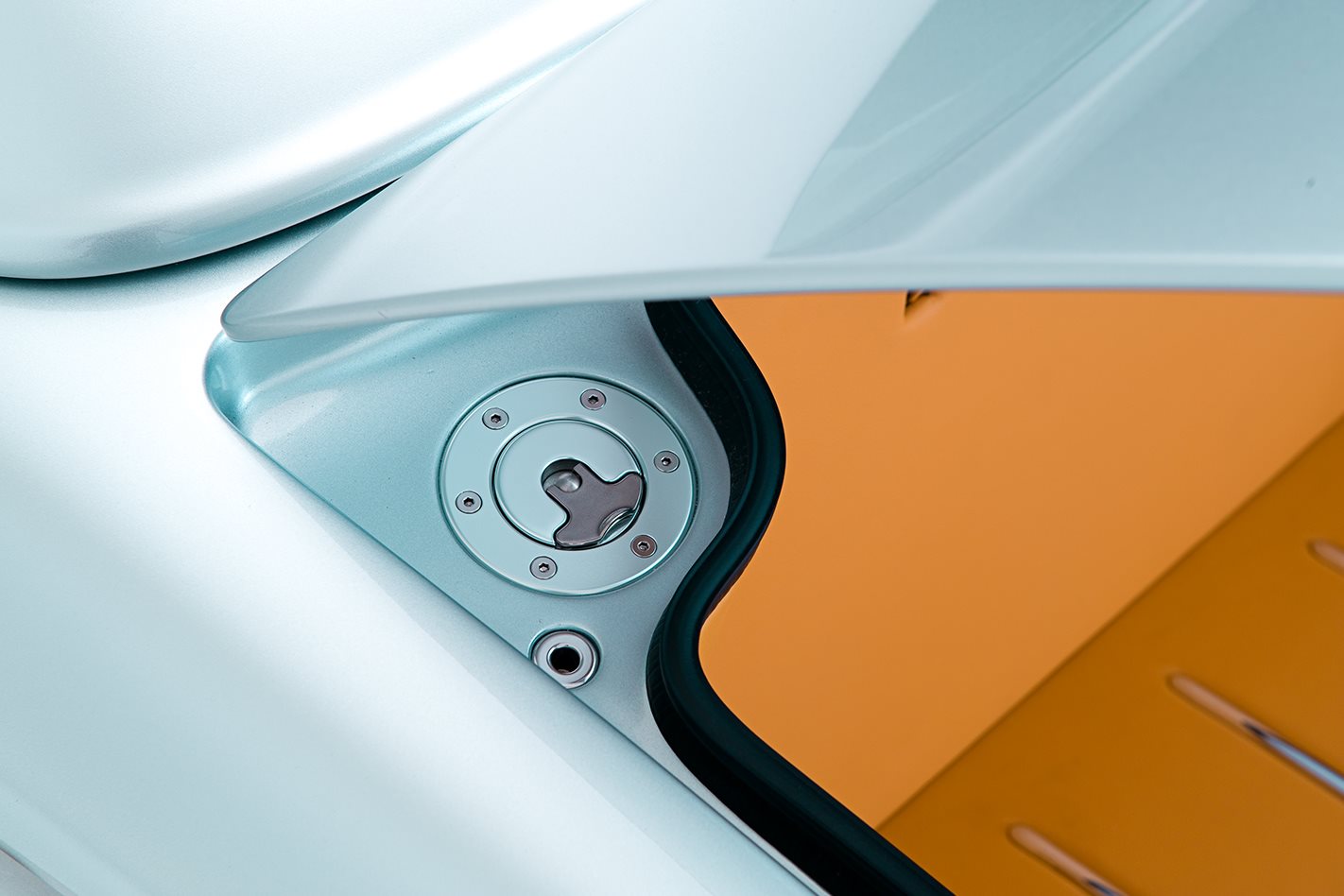 When it comes to elite-level cars, paint is points. So, to that end the entire engine — including the alloy sump and rocker covers — was painted in HOK Teal.

“Every part was a detailed, high-quality item before the paint was applied. It’s all billet aluminium stuff that was sandblasted, cleaned and prepped,” Peter says.

The chassis was also smoothed, with all of the TIG welds dressed and radiused so that they’re all even, while a lot of thought went into designing crossmembers and mounting points so that you can’t see how they’re attached. For example, the gearbox crossmember appears to be a straight bit of tube that runs under the transmission. Look closer and you’ll find a step-joint at each end secured from above by a couple of Allen-headed bolts. They’re still easily accessible if you need to drop the crossmember and it’s a much neater finish.

Details like the wiring also had considerable thought put into them. Wired by Mark and Gary Oppermann to V8 Supercar specs, Peter reckons it’s such a nice job it was almost a shame to cover it up. 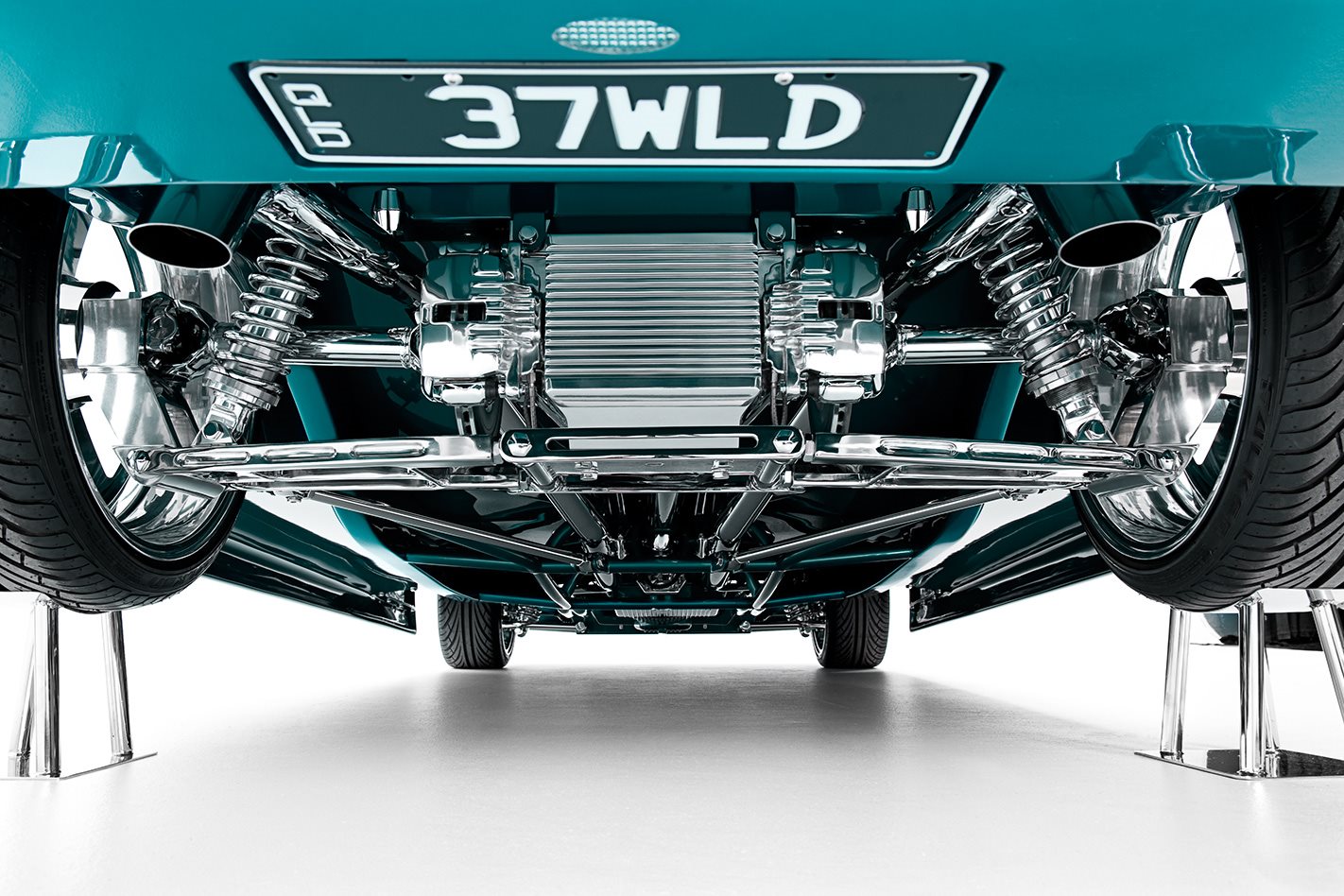 “The wires are small but carry high amperage and it meant we didn’t have a large amount of cabling going through the car,” Peter says. “There’s quite a bit of wiring in the car because of all the electric stuff like the windows. There’s also a solenoid that unlocks the glovebox and the boot is on an electric activator as well.” 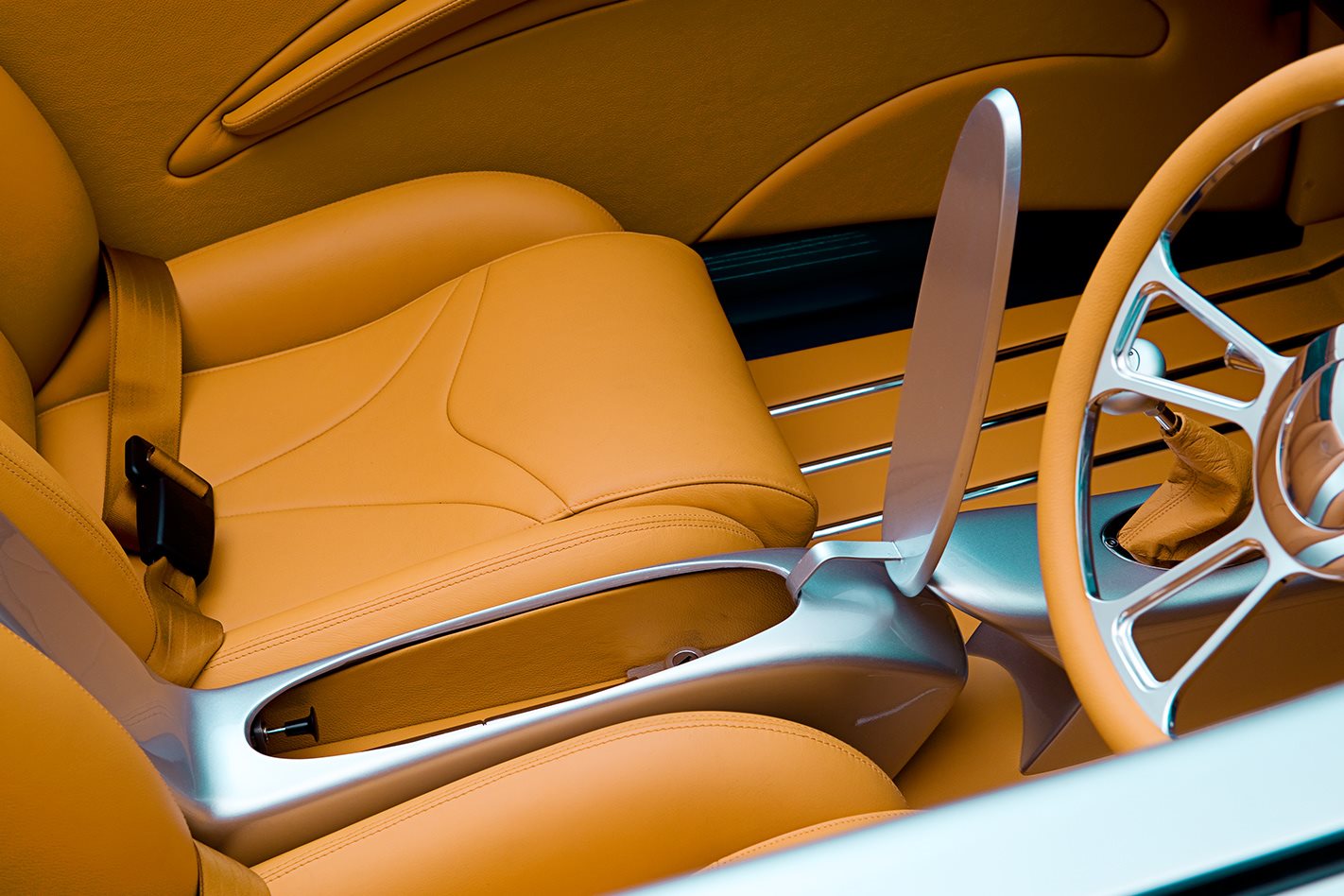 The interior in this car is truly a work of art, and it showed that by picking up Top Interior at Summernats 21. The hard parts of the interior were designed and built by Paul Kelly to blend smoothly with heavily modified bucket seats. These once saw service in an ED Fairmont, but were chopped and reshaped to such an extent that Peter reckons it would have been easier to start from scratch. Peter then employed Tony Cairns from All Style Interiors to assist with the design of the door cards and seats and then cover everything in luxurious leather. 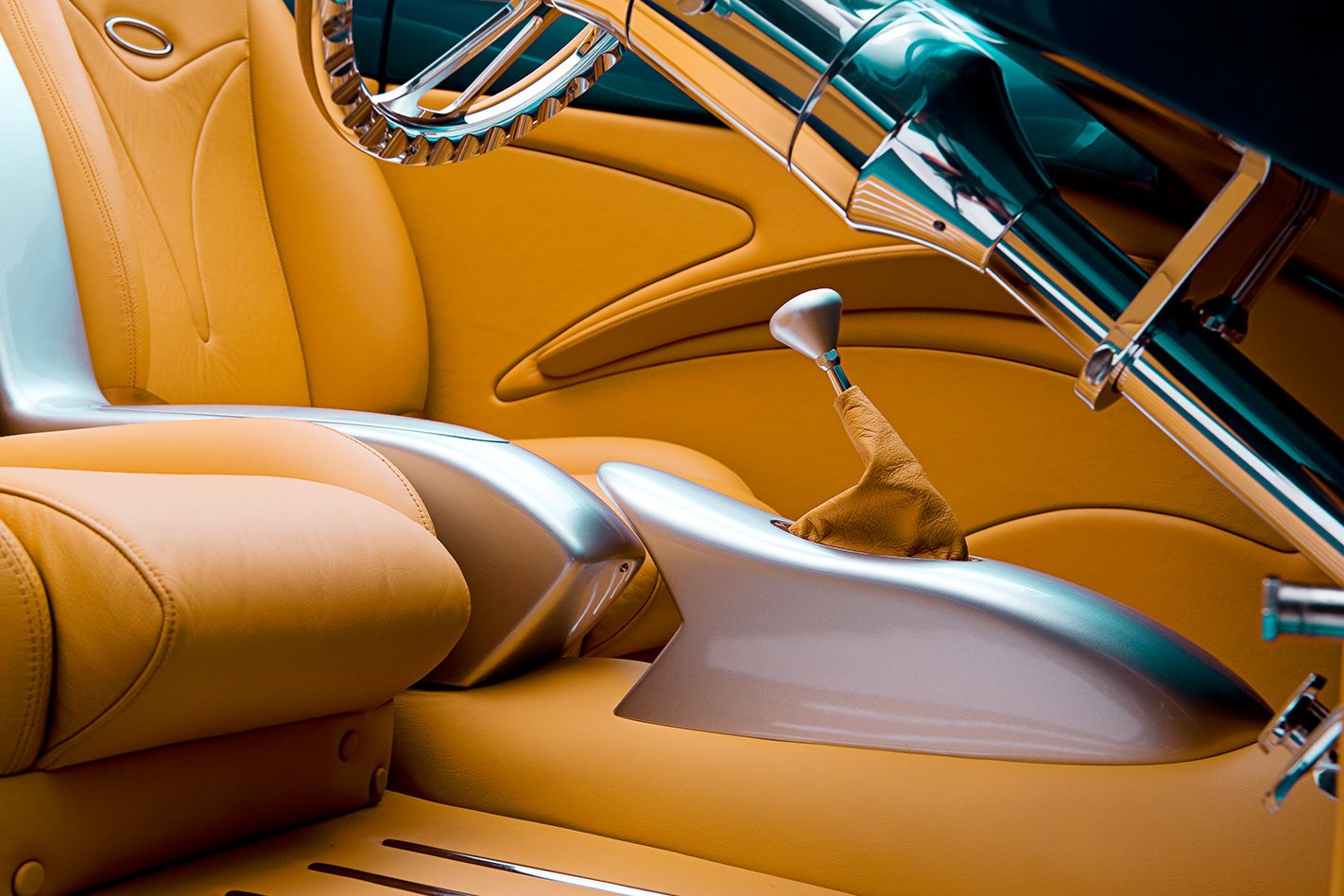 The interior is unrecognisable from the factory layout — this might be a ’glass rod, but it has been completely customised. Replacing the centre-mounted gauges is a Dakota Digital dash right in front of the driver — where it belongs on a ’37 Ford. Echoing the oval shape of the instrument cluster is a glovebox that opens and shuts via a remote-controlled solenoid. The console that flows down between the seats houses all of the switch gear, ignition key and handbrake, while a second console houses the Lokar shifter and electric window switches. 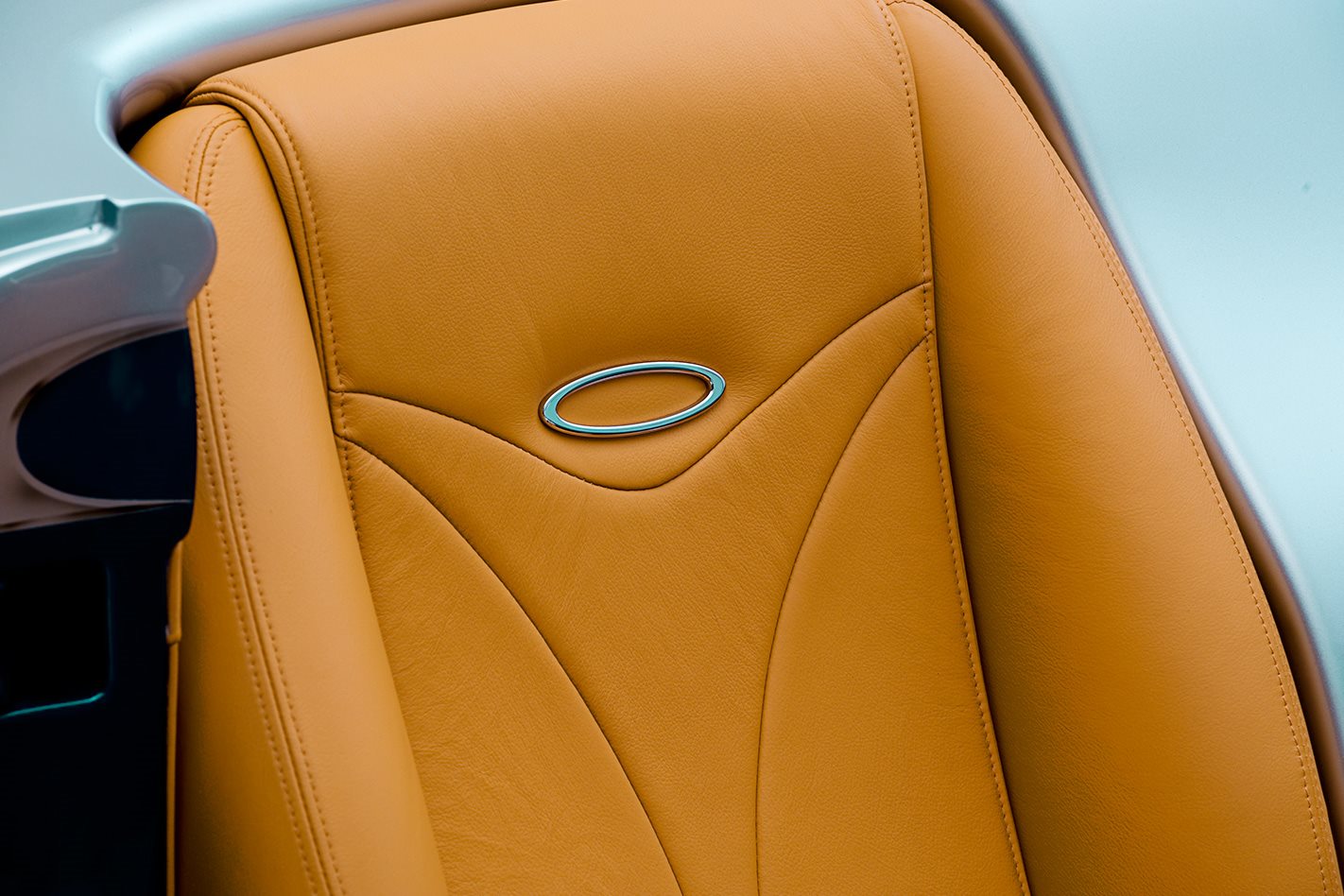 These pieces weren’t just shaped up out of lumps of fibreglass and bogged over. “Paul created production-styled moulds off the masters so quality parts could be produced,” Peter says. “These moulds and panels also made it possible to create other special moulds and compression formers, so parts such as the instrument cluster plastic lens and glovebox lid inner and outer segments could be made.”

Kev Britton deserves special mention. When it came to all those little one-off pieces, Kev was the go-to man. He organised the machining of the special cup washers that hold the fasteners in place and made a swag of parts for the car that you just can’t buy off the shelf. He was also responsible for that trick slip-joint set-up on the exhaust. 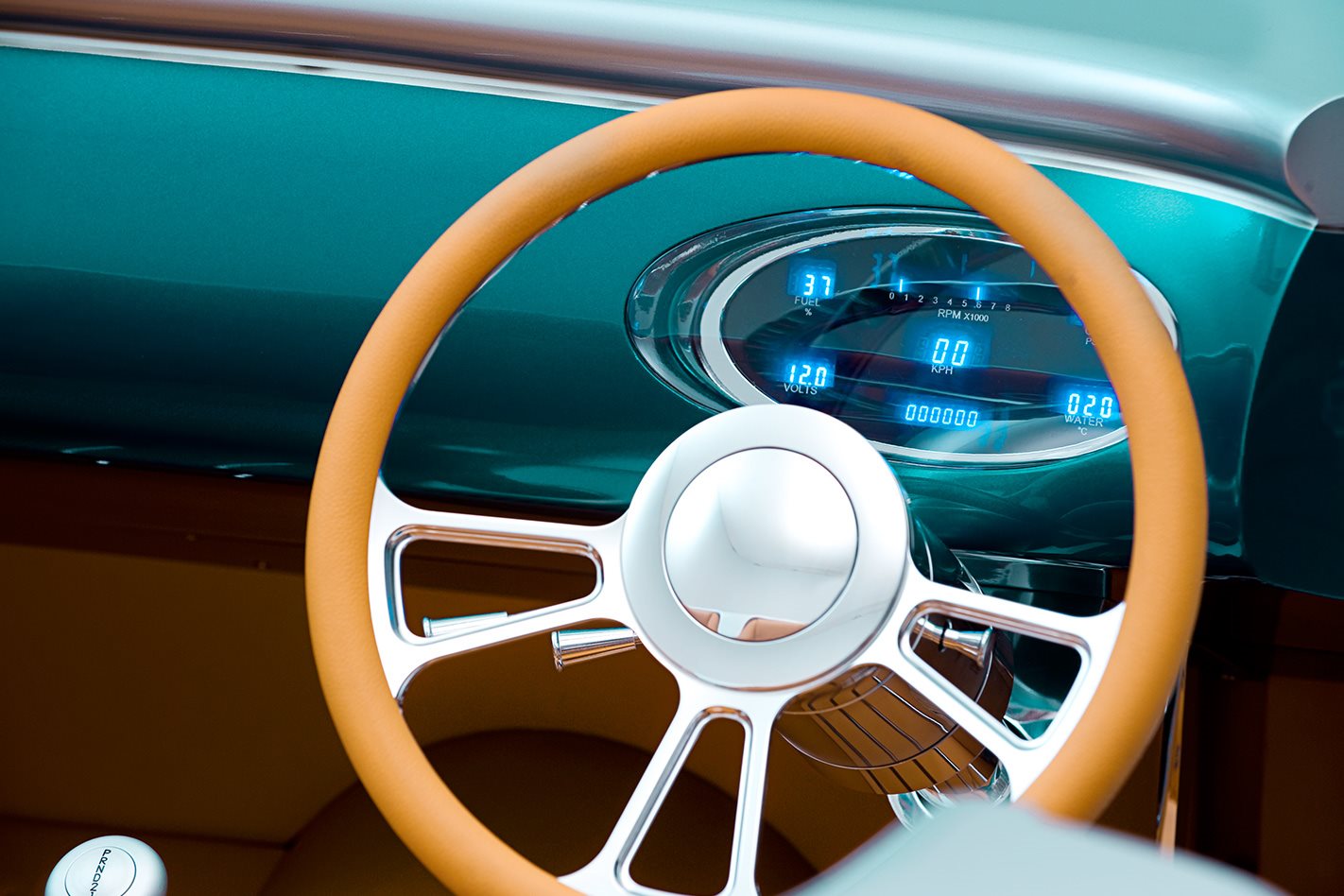 When it finally came time for paint, Peter had his heart set on a two-tone scheme: “I always wanted two-tone and I always wanted silver, but it was a big decision to go with teal. Paul said teal from the start, so I got Andrew Ash to do four spray-outs and I picked the one I liked the best. I just wanted something different.” 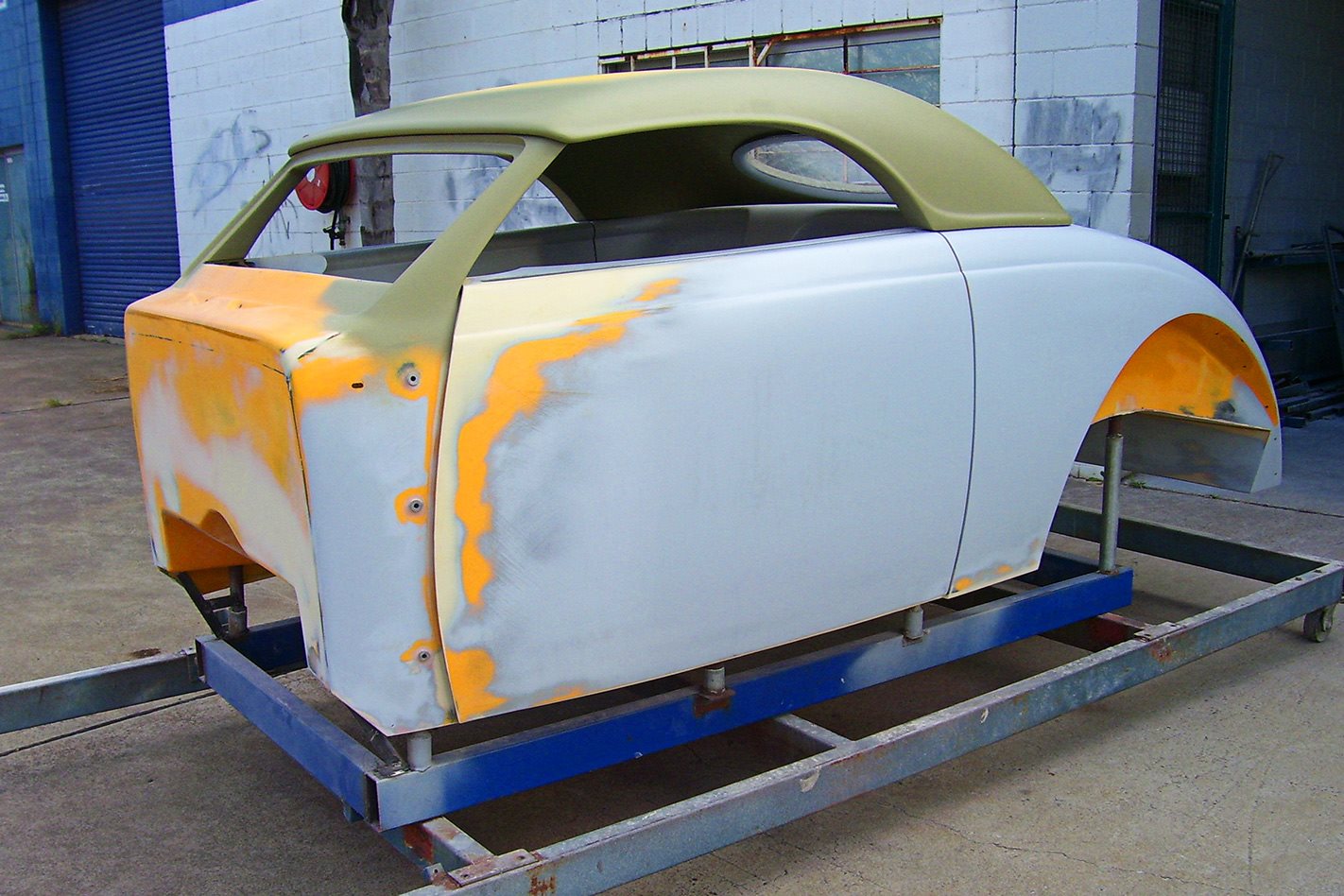 Andrew works at AA Panel Craft, in Bowral, NSW — not very close at all to Queensland. “I made five trips down there with the chassis, body and various bits and pieces,” Peter says. Not only does that underline Peter’s dedication, but it’s also testament to the quality of work that AA puts out. The finishing touch was some airbrushing by Joe Webb of Bad Image. 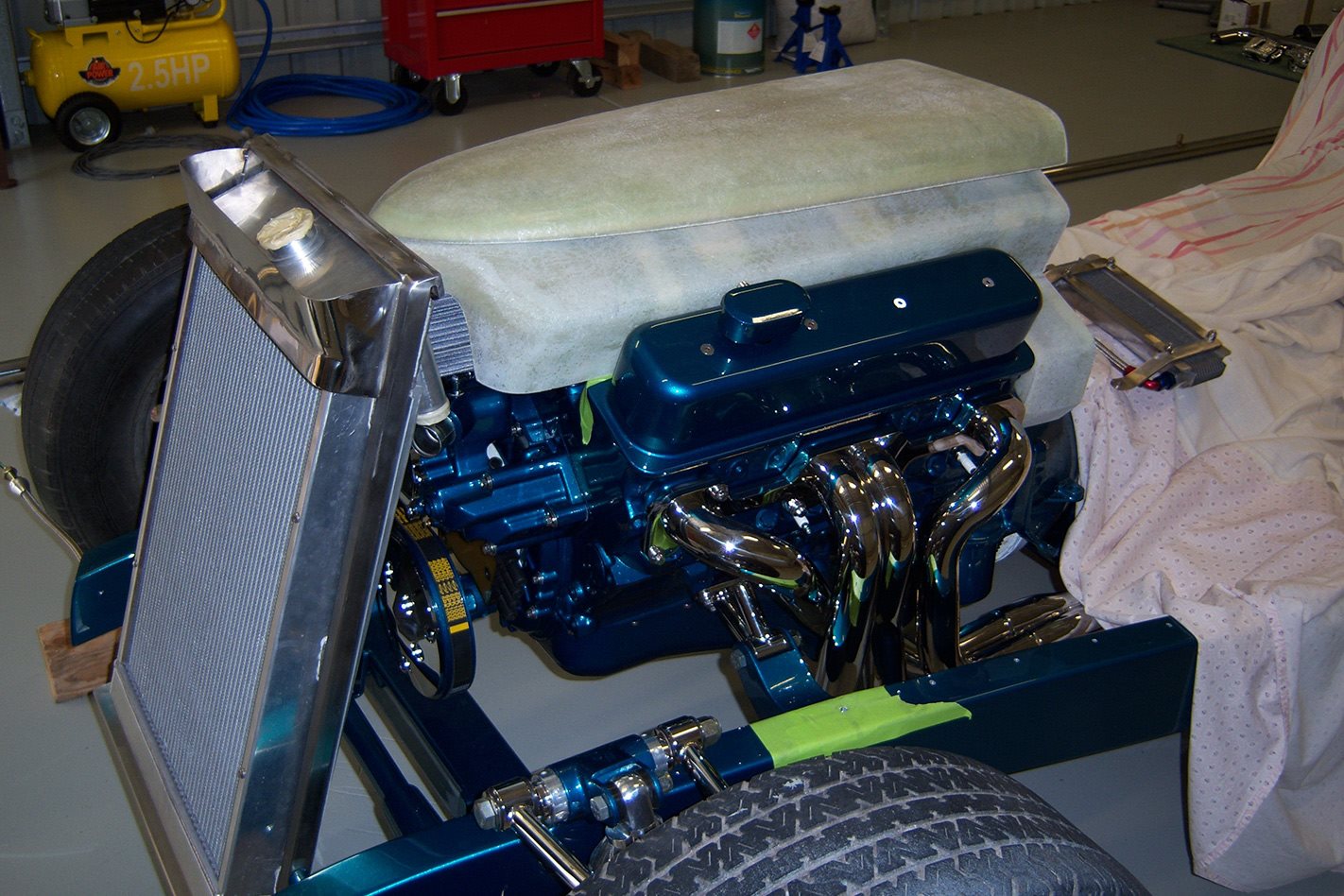 “I didn’t want a straight separation line, so I just left it up to Joe to come up with something,” Peter says. His faith was rewarded with a simple and understated design that highlights the car’s quality. It truly has the highest level of fit and finish possible. 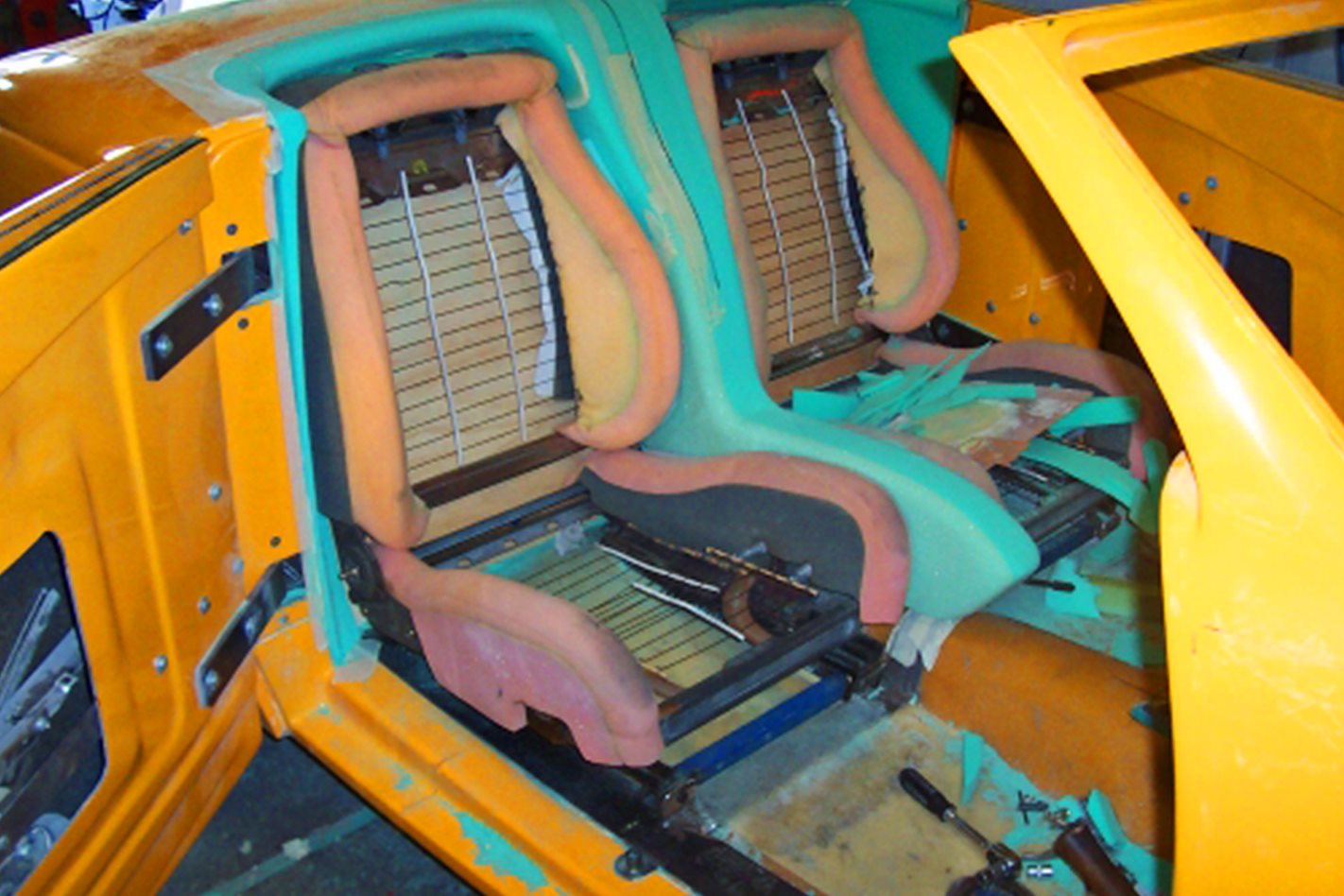 Peter admits it’s a big-dollar car but there’s still a hell of a lot of his own work in it. Once it was back from the painters, he handled the entire re-assembly in his shed at home in a made rush to get it to Summernats on time. The car came back from AA on October 20 and it got rego on December 17, so it was a pretty busy couple of months. We’ve told you about the big stuff on this rod. Make sure you have a really good look at it if you get to see it up close — you’re sure to find something that’ll have you scratching your head.