TO BUY or not to buy. Purchasing any car sight-unseen is a gamble. Taking that chance will always guarantee a nervous pucker, but when your heart desires something rare like a ’41 Mercury, slim pickings tie your hands pretty quick. 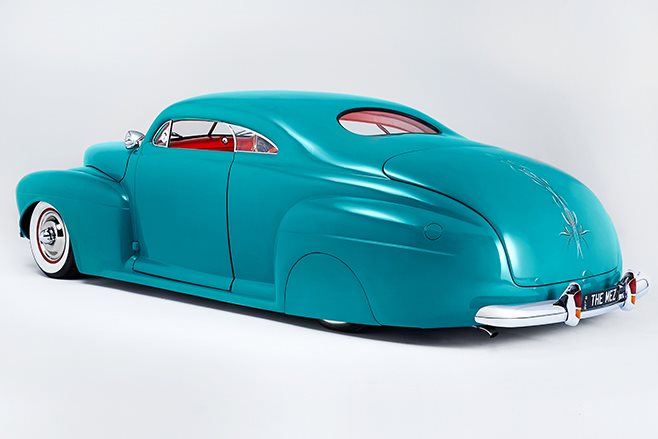 Some people can be lucky and hit the jackpot, but other times? Well, you’re about to read all about that side of the coin.

Brisbane tattooist and custom artisan Mez knows this sinking feeling all too well, but is no stranger to spinning straw into gold – his cool-as-hell chopped, two-door EK (SM, Jan ’10) evolved the same way. 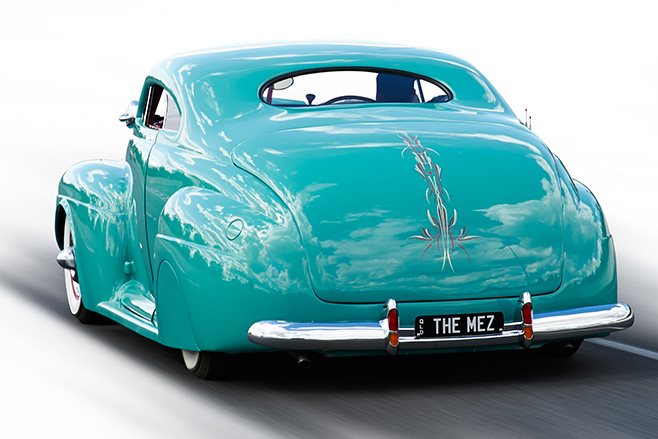 This one popped up on eBay in 2009 and Mez struck a deal via the interwebs. The car was an early Californian custom that found its way to Upstate New York and copped a freshen-up in the early 2000s, so Mez figured he was on the right path.

“The plan was just to buy it and cruise around. I met the car in California a month later and soon realised that wasn’t going to happen. I got two miles up the road and a shock mount snapped, then the airbags leaked out and I nosedived the front end. I was gutted. The car was in a terrible state; it had been cut, shut and generally fucked up real bad.” 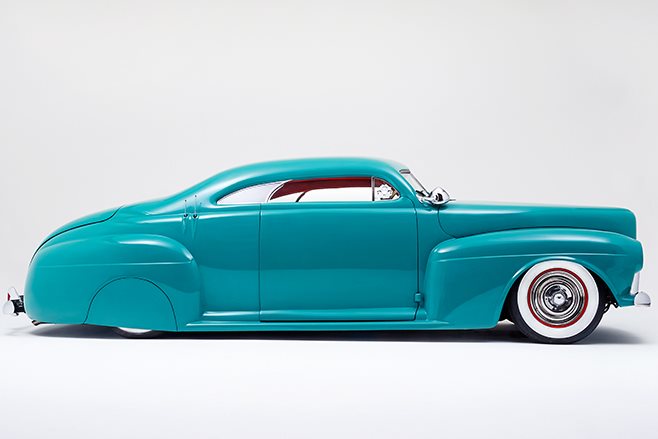 About the only thing left that you can recognise from the original car are the frenched antennas. Practically everything on this car had to be rebuilt, so now it's a safe and reliable cruiser and also a much better-looking custom

Back home to safe shores, Mez quickly set about righting the many wrongs by stripping the car down and selling off any unwanted bits: “The original 350 and Turbo 400 were toast. It had some weird Ford Ranger diff in it and the Mustang II front end was all cock-eyed. It was just easier to flick it all and start with a bare bodyshell and chassis. I reckon I sold off 80 per cent of the car!”

Paul Kelly from Smooth Customs had been involved with the EK build, so Mez knew he was the man to bring the Merc’s core assemblies up to speed. Paul began by re-boxing the rails and fitting a new crossmember. A Jag was robbed for its front end while an XR8 Falcon diff was installed using a parallel four-link and Watts linkage, with the rear ride height dialled in via AccuAir-controlled ’bags. 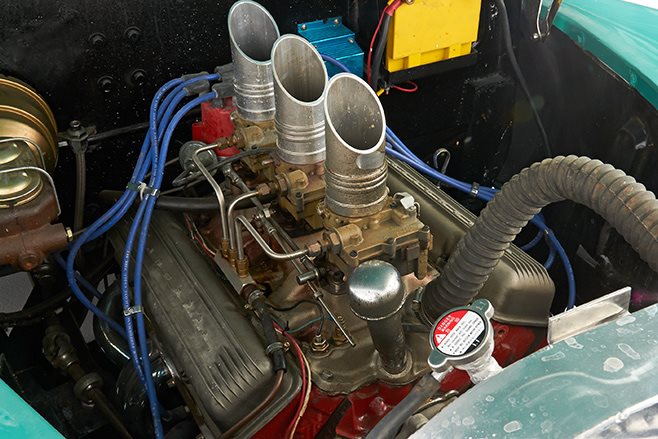 A Corvette-styled 327 was built to match the old-school flavour and features a steel crank and fuellie heads. An Edelbrock intake mounts a trio of Rochester jugs that open via a progressive linkage set-up. Backed by a shift-kitted turbo 350 and 3.7-geared LSD, this punchy little combo has ample grunt to satisfy Mez’s leadfoot hankerings

Paul kept the welder burning long enough to recess the firewall and replace the floorpan, while fresh mounts for a small-block were sorted before heading home to Mez’s backyard digs.

A Corvette-spec 327 was built using parts from the old-school way of thinking; a steel crank, fuellie heads and a Comp Xtreme Energy hydraulic cam sorts the heavy stuff while the Edelbrock tri-power intake topped with Rochester 2GVs ticks both show and go. 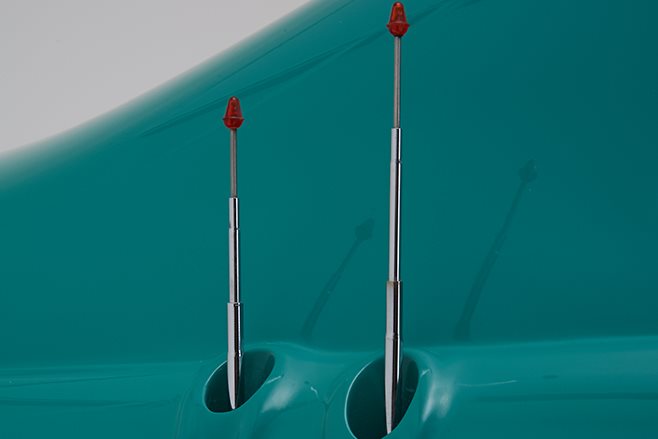 A Turbo 350 trans was shift-kitted and fronted with a 2200 stall, while the aforementioned Falcon diff is filled with a 3.7 LSD centre. The complete package makes for some respectable horsepower and it’s refreshing to see a full custom that’s as toey as a Roman sandal: “It’ll torch the tyres into second gear, so yeah, it goes all right,” Mez laughs.

The original Jag rack-and-pinion handles the steering chores and is the basis for the RHD conversion, tied to a Falcon collapsible column that’s been stripped of its ugly bits.

Brakes are a combination of Jag and Falcon discs, hidden behind 15in steelies wearing wide whites and Sombrero caps. 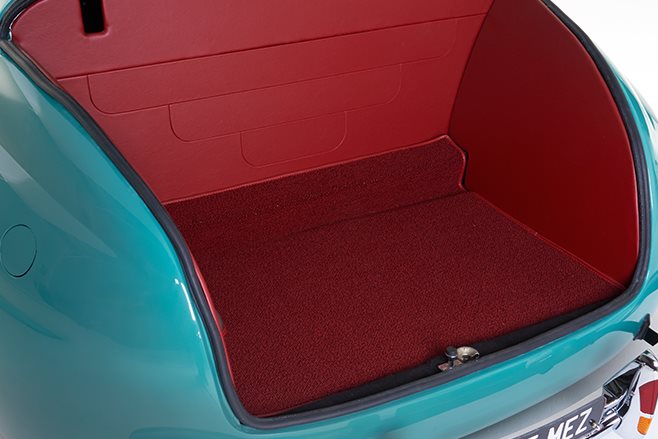 As a mechanic in a former life, Mez knows his way around the spanner work, but his skill-set doesn’t end there. The custom bodywork was his own doing and locks in the Aussie rebirth with FJ bumpers front and rear — sans front overriders and all mounting bolts. The rear overriders house custom tail-lamps whipped up by Rob Walker.

Recessed headlights and a complete shave of all chrome, handles and badges are cornerstone custom touches, while flush-mounted skirts and a pair of frenched aerials complete the rear styling. 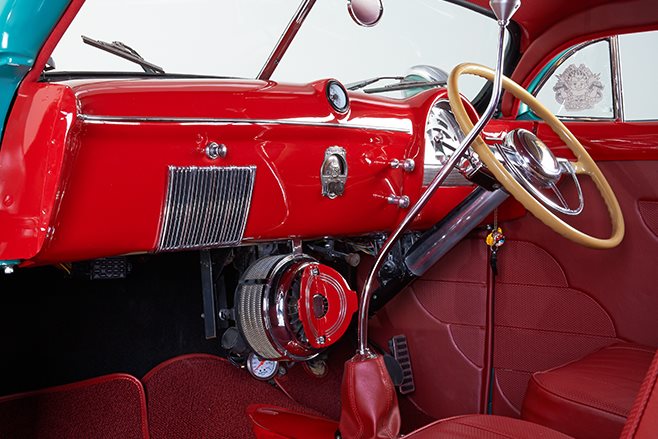 The dash was pilfered from an Aussie ’53 Customline, which made lighter work of the RHD conversion. A ’40 Chev speaker grille resides in lieu of the original glovebox, while an art deco-styled heater and vintage RCA radio tie in nicely with the ’41 Caddy twirler

The roof chop measures in at a heavy six inches and was originally cut decades earlier, however Mez rechopped and reshaped the turret to improve its proportions. “It just didn’t look right and needed to be squared up — no surprises there — so in for a penny, in for a pound, eh? The roof flows far better into the rear quarters now and I moved the windscreen up into the roof to stop the squinting look.

All guards and the running boards were moulded to the main shell before Mez’s ’beater mate, Two-Tone, sharpened all bodylines and ran an experienced eye over the reborn metal. Mez donned the mask and sprayed the Merc at home in his own mix of Mezaqua acrylic, replacing any last trace of the original Yankee powder blue. Scotty Makin then pinstriped the bootlid as an appropriate finishing touch. 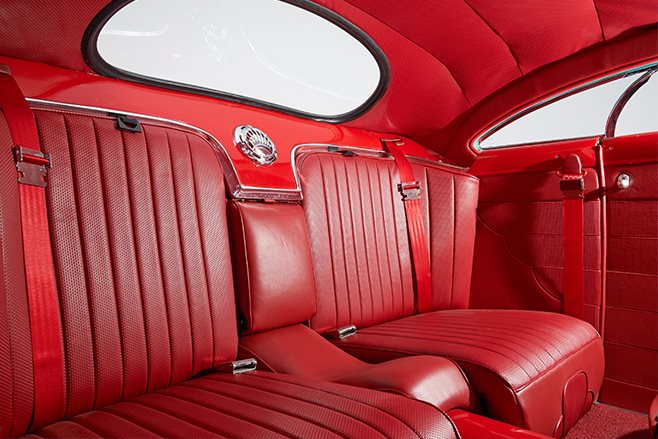 ’64 Thunderbird seats front and rear were sourced by Mez during a US buying trip. They are split by a full-length steel console that snakes its way up to a wraparound rear parcel shelf. The striking red interior combines Monaro fabric with Mercedes carpet

The cowl-mounted Appleton spots live a double life, twisting to pop the doors via pull-cable assemblies. Swing those doors a little further and you’ll notice the Art Deco-inspired heater mounted front and centre, and tucked neatly below a heavily modified ’53 Customline dash. Mez was again responsible for the dash tweaks, removing the original glovebox and filling the void with a ’40 Chev speaker grille, wired to an early RCI radio.

The stock ’53 gauges were rebuilt and look right at home flanked by the ’41 Caddy wheel and Lokar shifter. A full-length metal console divides the ’64 Thunderbird front buckets, and mates to a custom wraparound rear parcel tray that blends with the matching-era T-bird rear seat. 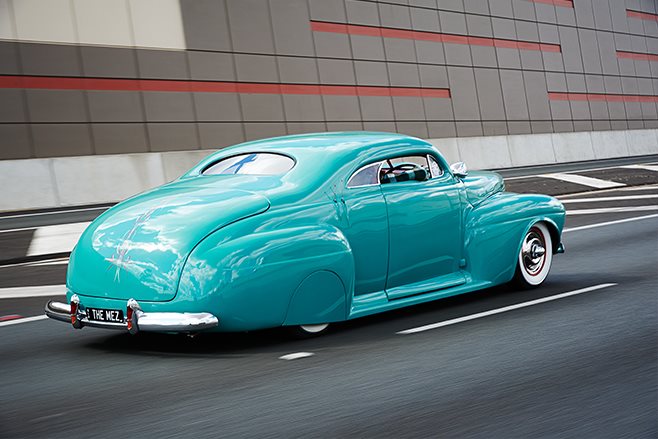 All painted interior metal was lathered in Carlton Mid tinny red — no shit, check out a can yourself — while the luscious soft finishes are the handiwork of Cam at North Coast Custom Trim. Mez specified repro HK Monaro material and Mercedes carpet to complete the red package, which works in nicely with the aqua hue.

The custom window frames were hand-formed by Mez out of 12mm RHS and inspired by the Barris-Matranga ’40 Merc; this was pretty much the last item to be sorted before Mez could finally cruise around as originally planned.

So what next? “I’m balls-deep in a custom FC wagon,” Mez reveals. “I love my Aussie stuff and this one’s been chopped, converted to a [lengthened] two-door and panelled in like a delivery. It has a DeSoto grille and inverted ’54 Chev tail-lamps, and will hopefully be done by Christmas. Then I’m back to the States to buy something else — probably a mid-30s Mopar — but this time it will actually be a good car that I’ll see in person, with my own two eyes, before handing over any cash!” 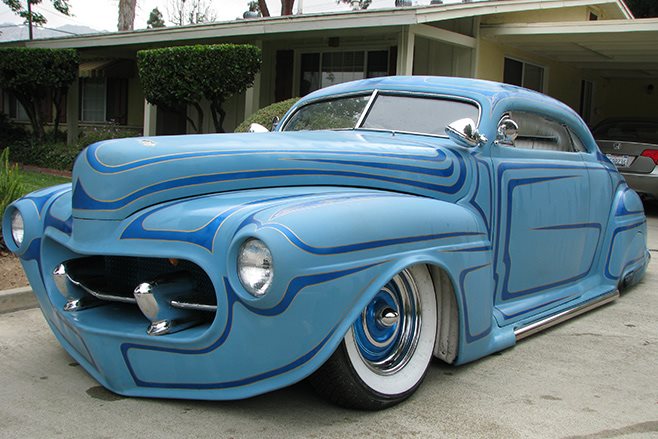 The ’41 looked to be an honest old girl when bought back in ’09, but sadly the beauty was only wafer-thin. “The plan was just to buy it and cruise it,” says Mez. “But that kinda went out of the window real fast.” The peaked front made way for a ’46 Oldsmobile grille while the front screen was opened up to improve the proportions of the chop 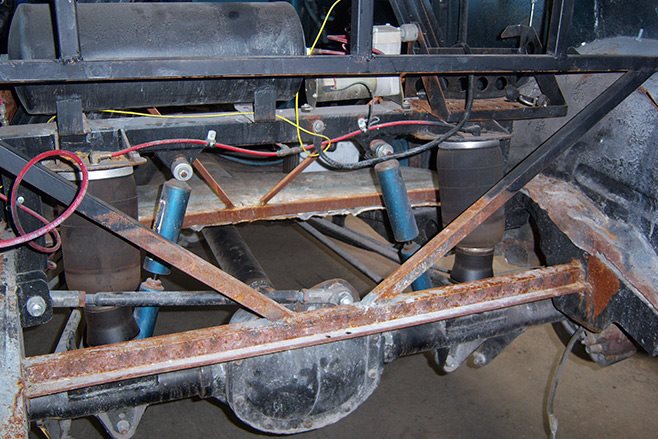 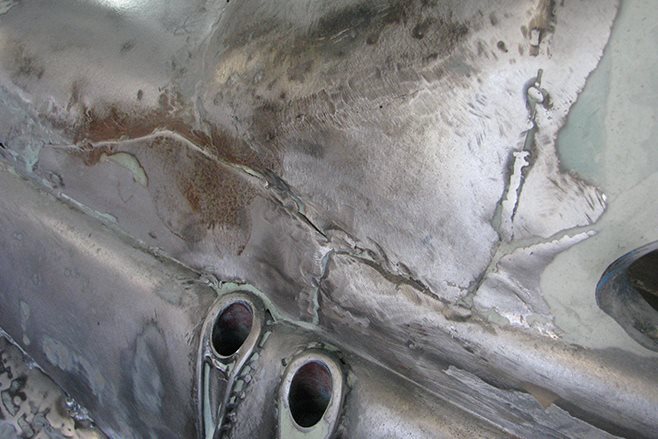 “This is what we found under cubic metres of bog,” Mez explains. “The Yanks had ground right through the metal in some areas and left gaping holes that were simply slapped full of Bondo.” The frenched aerials are probably the only styling cue that remains from the original car, but of course needed proper finishing to bring them up to standard 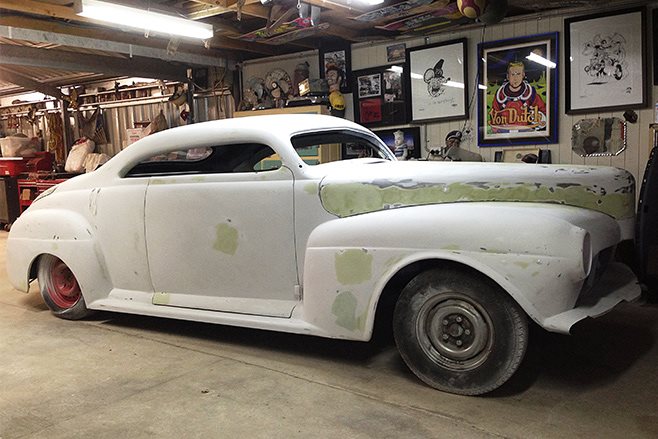 Shown here patiently waiting for paint, the impact of that 6in chop is like a punch in the throat. The Merc was blocked back by Mez and his ’beater mate Two-Tone over a three-week period to get the body oh-so-right. The aqua hue is a custom mix, with the top coats sprayed by Mez in the home garage. The nearly finished Merc was unveiled at Cooly Rocks On last year and later awarded King Kustom at GreazeFest 2014 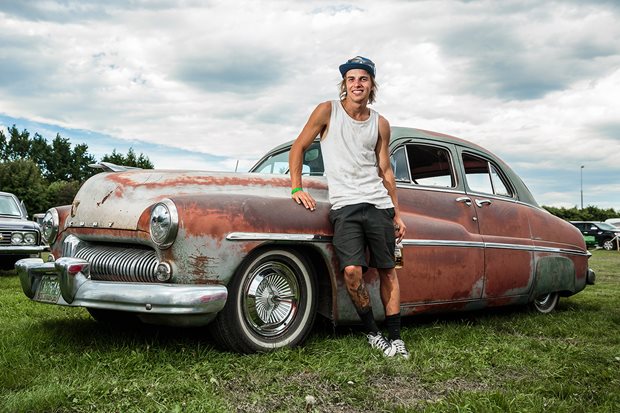 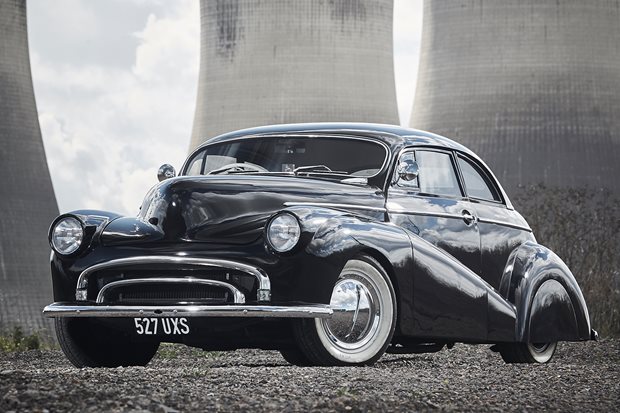