IN BUSINESS, it’s a good idea to get out there and show people what you do. And that, folks, is the fundamental reason this mountain-motored Torana exists. It’s a blown, big-blocked business card for chassis, suspension and brake hardware specialists Castlemaine Rod Shop, north-west of Melbourne. 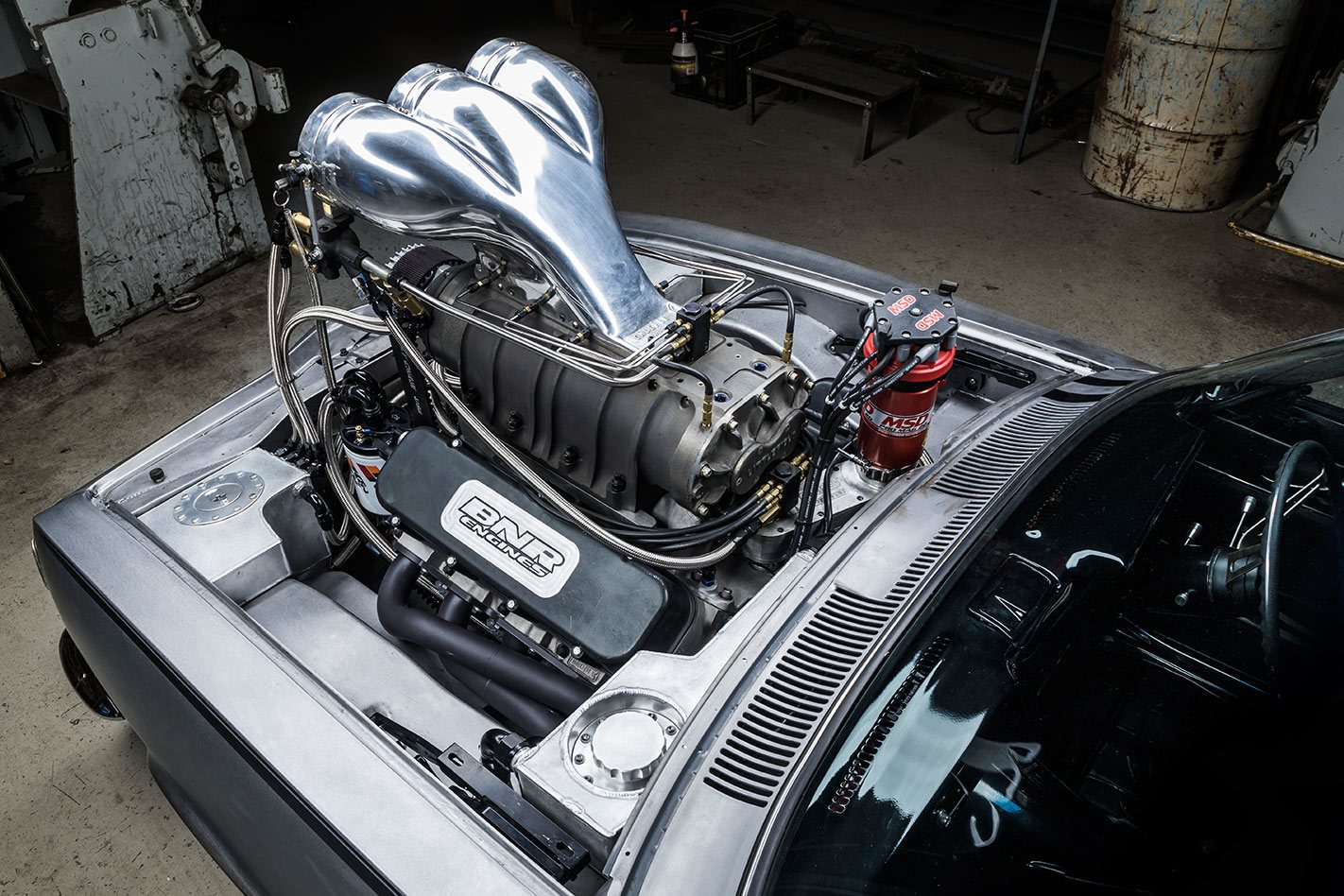 The Torana’s build has taken a few twists and turns since The Rod Shop’s Heath Waddington brought the car home a decade ago. Seeing a few ‘before’ snapshots of this little Torana, it’s easy to agree with his honest summary: “We should have chucked it away and got another good one.” 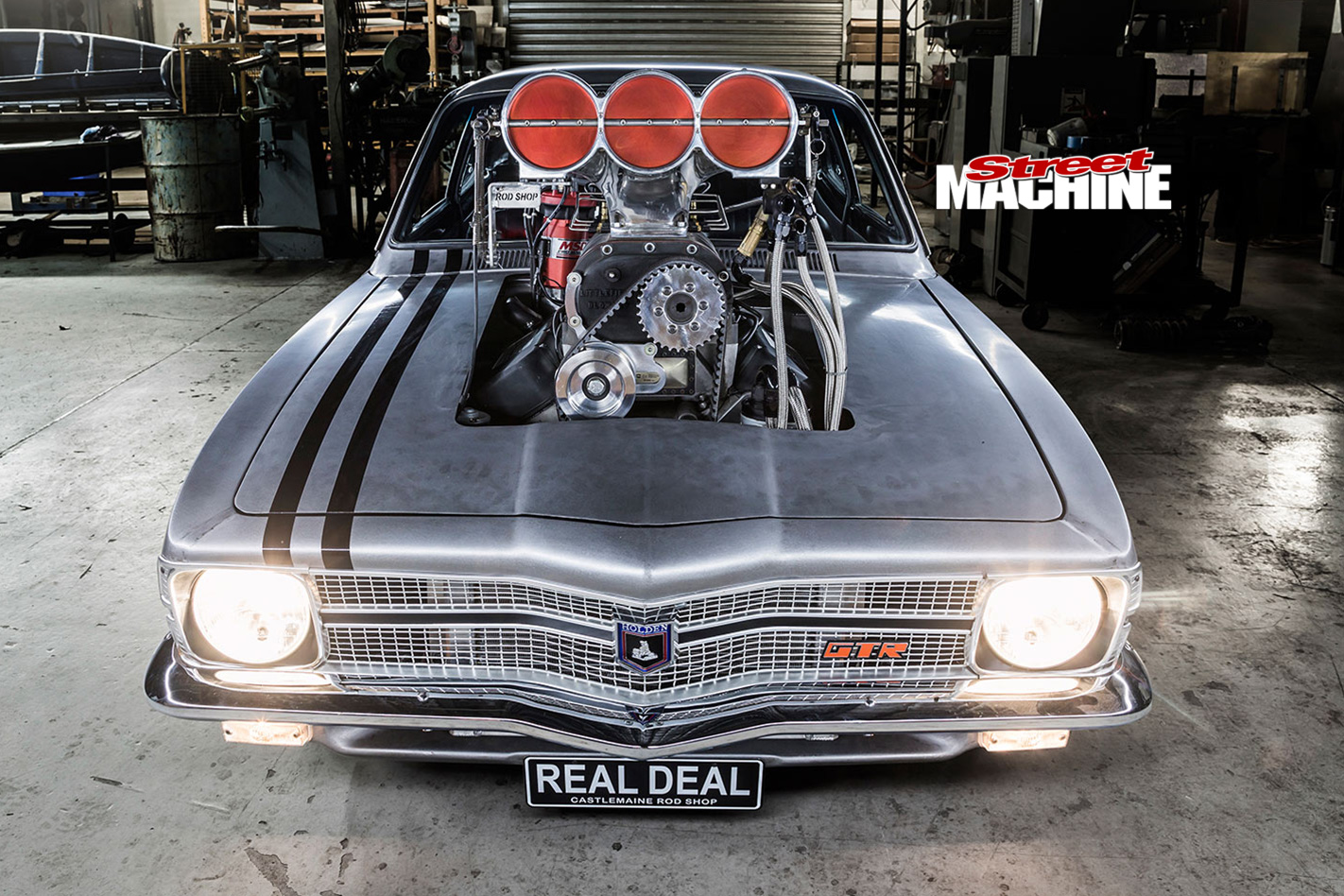 You’ve probably heard a similar story – and read about it in Street Machine – dozens of times over the years: A project car so munted due to rust or damage that there’s little more than the chassis number and roof skin remaining at the end of the build.

Heath bought this project in Ballarat when he was a 16-year-old apprentice. “At first I wanted to do an XU-1 mock-up,” he says. “Real ones were worth a fortune; this one was a two-door shell that was reasonably priced. 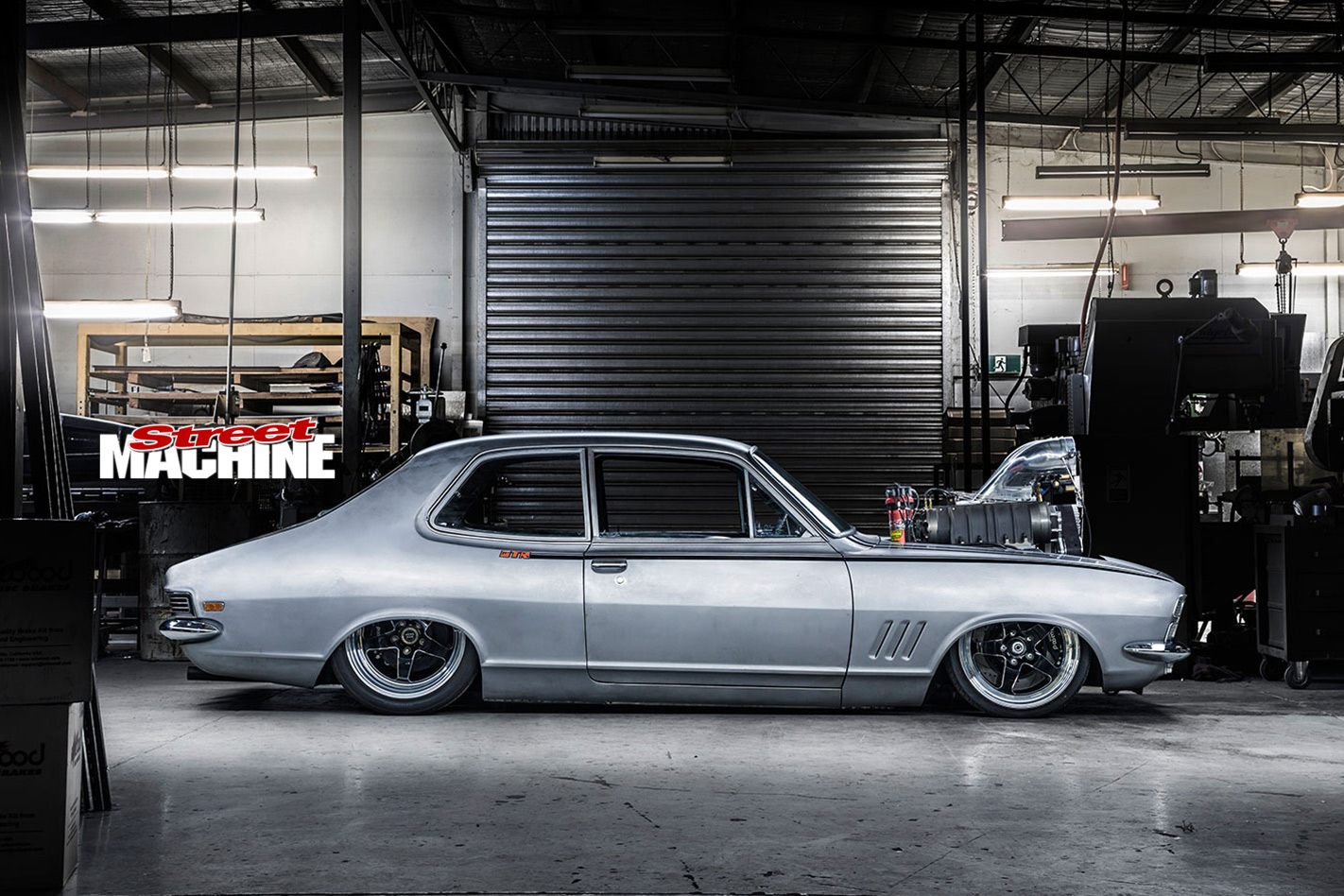 It’s been a big rebuild – the only remaining panels from the shed-find two-door are the roof and half of the driver’s-side rear quarter. Heath spent plenty of time massaging donor panels, but the door skins are brand new, made in-house by The Rod Shop – yes, you can buy them, too

“I had it sand-blasted and when I got it back from the blasters there was nothing left! Put it this way: If it was a customer car, we would have told them to go find another vehicle. That’s how bad it was.”

But looked at with a glass-half-full attitude, the Torana was an ideal project-starter for a more comprehensive, ground-up build. “I put mega amounts of time into it,” Heath says. “I decided to build a car that would win at MotorEx, so quality was a priority. I’m a coachbuilder by trade, so I got into it after work and on weekends. I’ve done a lot of time on it, but it was good fun just tinkering around.” 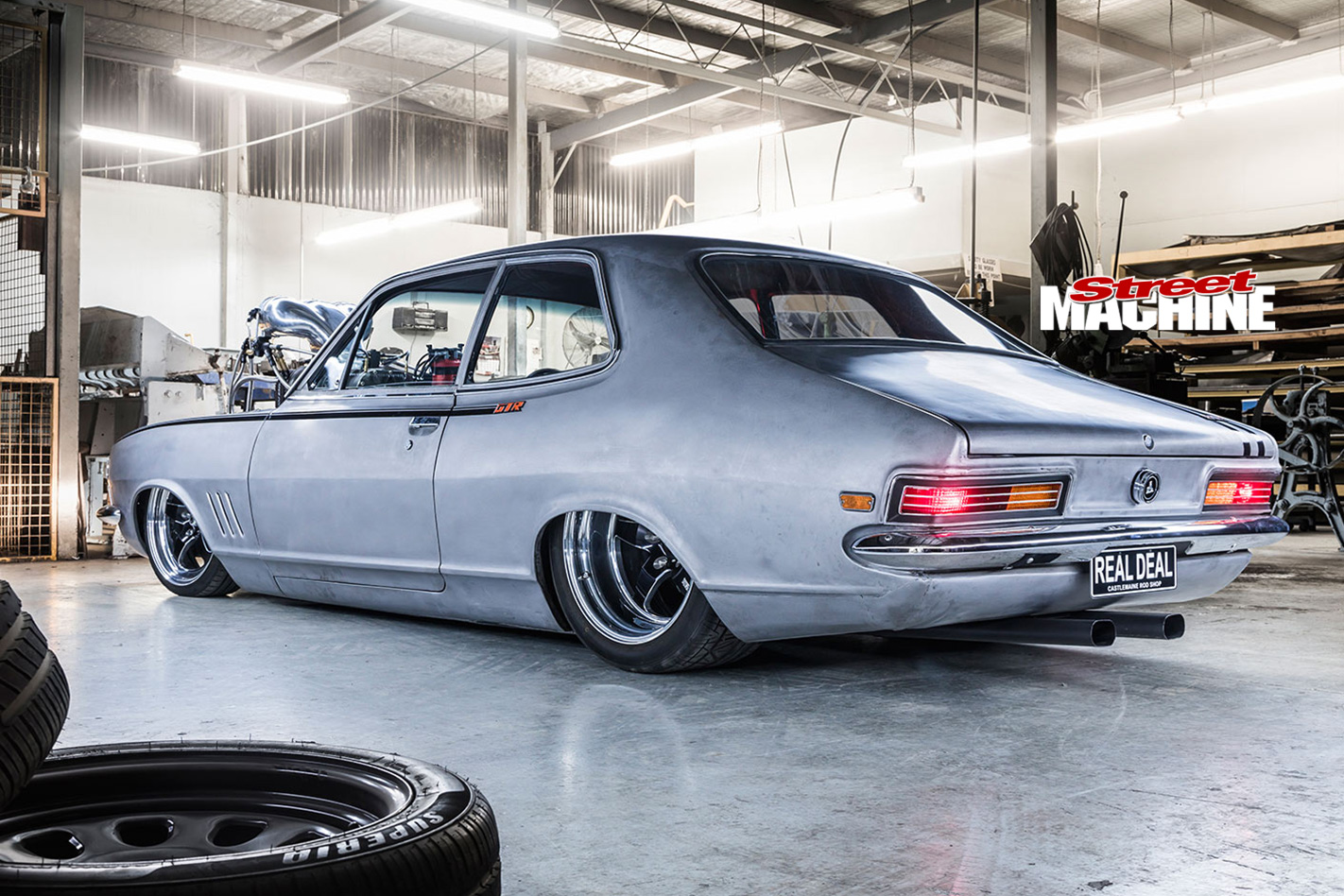 You’ll notice that the rear wheelarches haven’t been stretched, unlike the vast majority of early Toranas running big wheel and tyre combos. “I wanted it to look as much like a standard Torana body as possible, and that meant tucking the rear wheels right in so we didn’t have to stretch the guards,” Heath says

The car now rests on a custom CAD-designed chassis, with each rail laser-cut in four separate sides (left, right, top and bottom) and welded together to form one piece. It’s a considerably sexier alternative to the usual box-section rails, and allowed the Rod Shop team to customise the chassis to virtually any extent imaginable. The main rails taper significantly inward and upward at either end to allow for huge 295-wide tyres on the rear and maximum steering lock at the front, especially with all four airbags deflated. 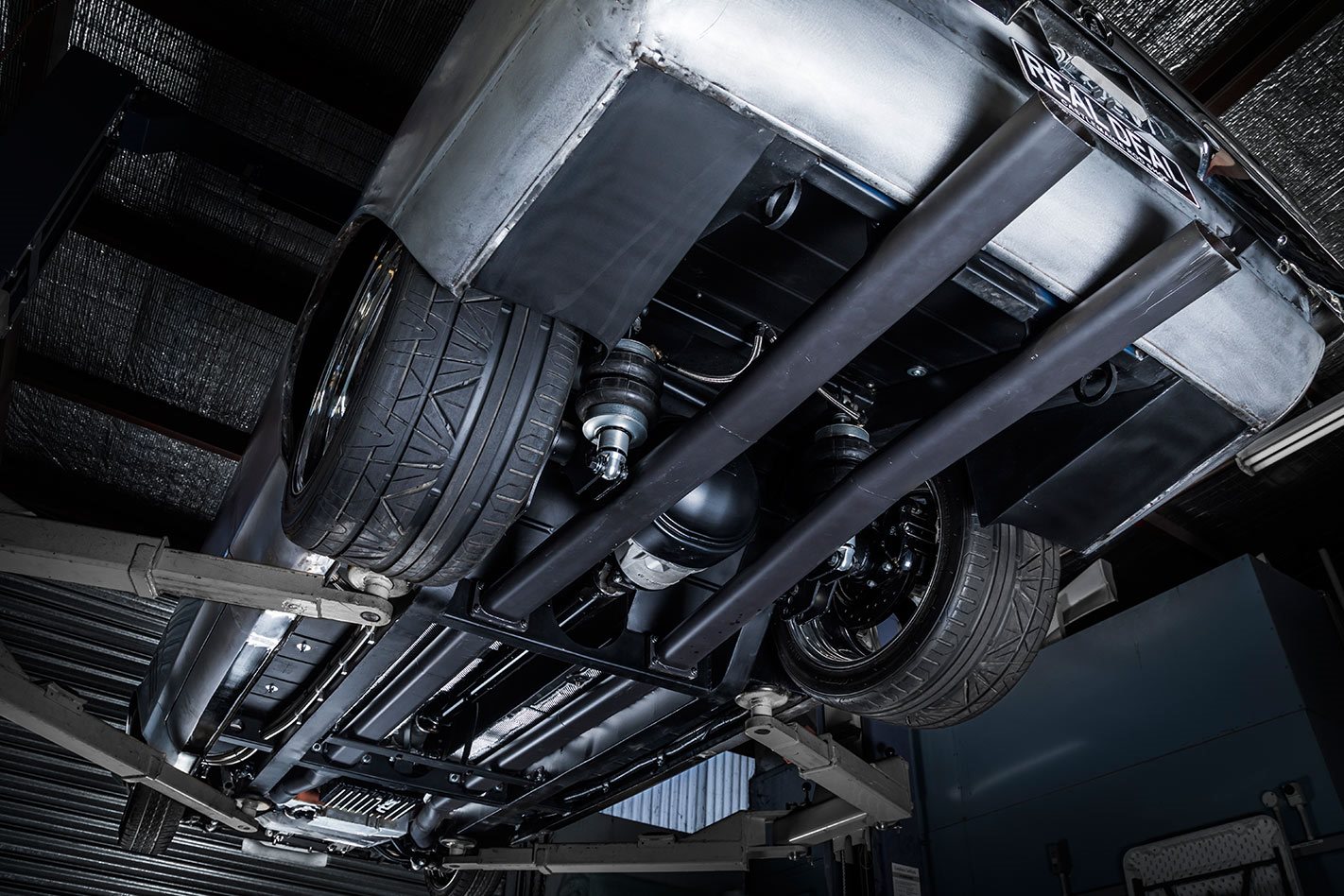 The rear end is - of course - a Rod Shop-built nine-inch, and like the front, it rides on Ridetech airbags. Back here, they have been carefully shielded from the raging rigours of burnout duty with leather gaiters. The top arms or the cushion four-link are quite short - Heath wanted the option of running a full-sized rear seat in future

The floor has been raised 100mm to get the car right on the deck, which meant some lateral thinking was required when routing the car’s various systems. The custom oval-shaped exhaust system travels through portals in the chassis’ transverse members for optimum ground clearance and runs inboard of the main rails, while the brake lines, fuel lines and wiring all run outboard of the main rails, keeping them away from the considerable heat generated by the exhaust. 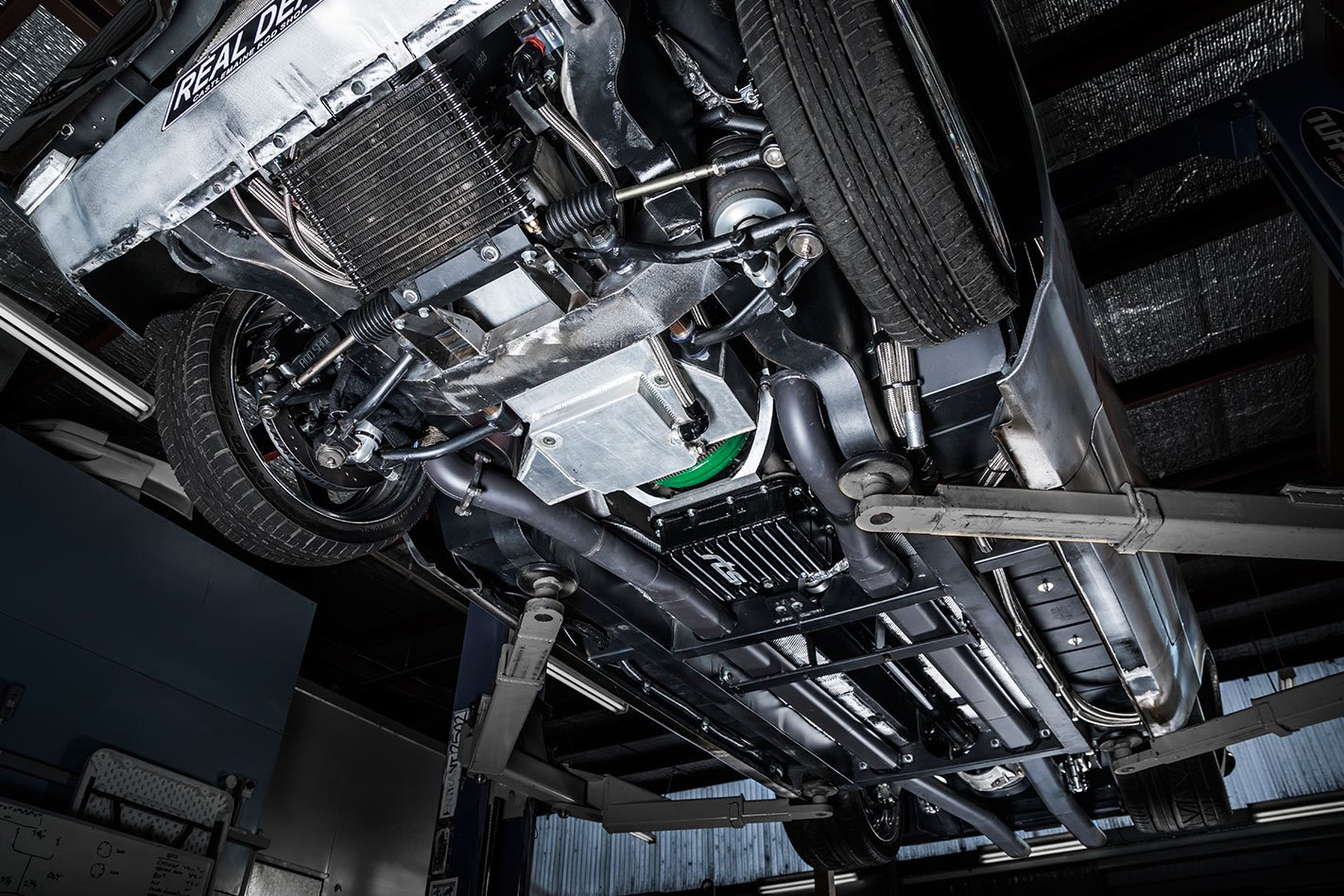 The front crossmember is a Rod Shop speciality. Although the company sells ‘off-the-shelf’ adjustable coil-over suspension assemblies with tubular arms and rack-and-pinion steering, it also offers a custom-building service for car crafters who require something more bespoke, such as this. Airbag suspension helps to achieve the ground-hugging stance that is one of the car’s biggest talking points

The car’s wild underpinnings have remained a constant, but the objectives for the project shifted once more midway through the build. At first, Heath wanted the end product to be an Elite-level show car. It was displayed at Summernats 29 with two blowers straddling a GM LS V8, and with Heath’s oh-so-smooth bodywork ready to be drenched in top-quality paint. 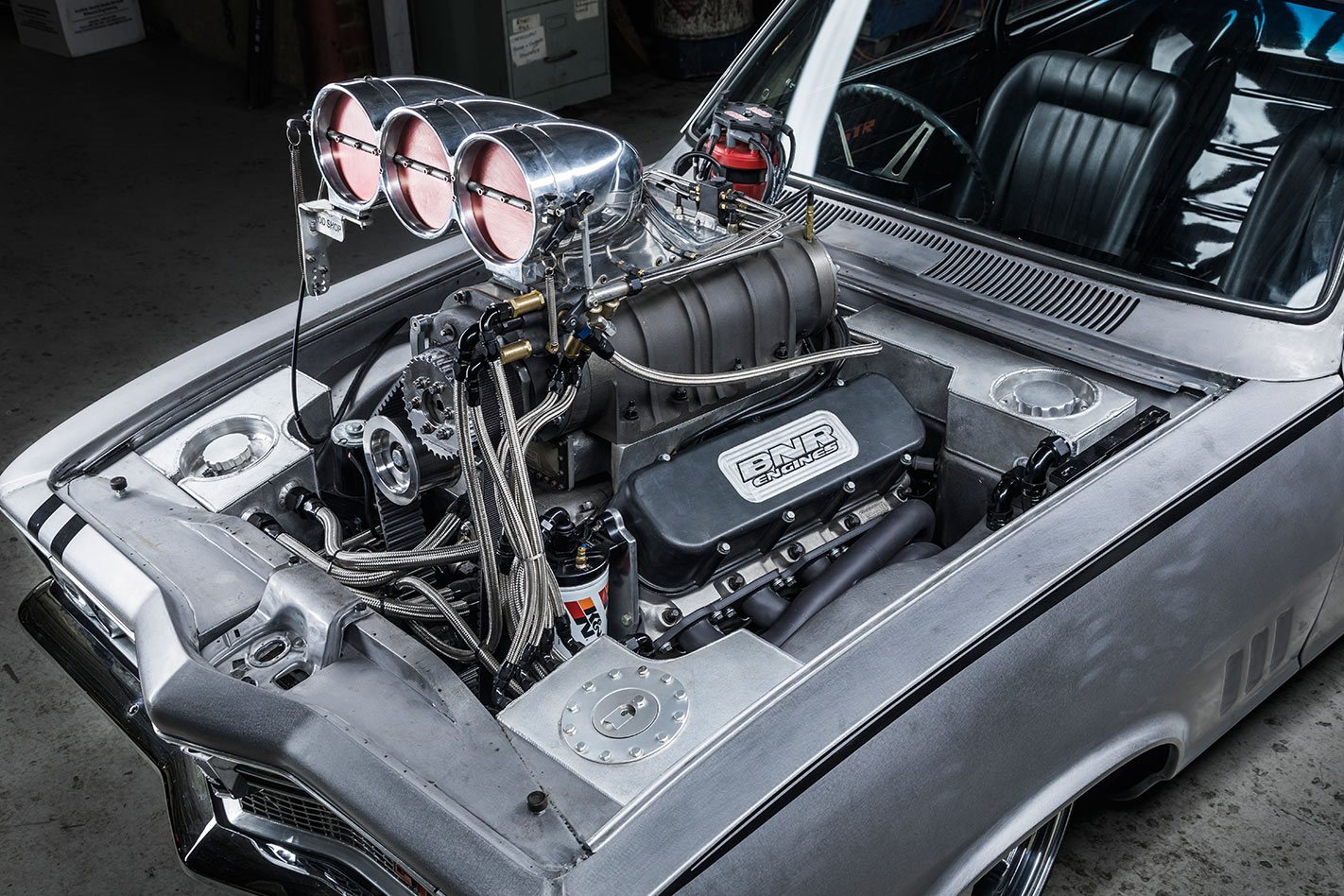 With its Big & Ugly hat and enormous 14/71 blower over 568 cubes, this is one serious mill. The Rod Shop lads bought the brawn from Brett at BNR Engies; Brett re-jigged the ex-drag motor to suit burnouts

“At first I wanted to keep everything under-bonnet,” Heath says.

“The idea was to make it a tough car, but make it look like a nice driver with all the stripes. Then the burnout scene started to get big and we thought we’d get The Rod Shop involved. We looked at a couple of cars – some half-finished projects – but they weren’t what we wanted. But we had this little Torana sitting there…” 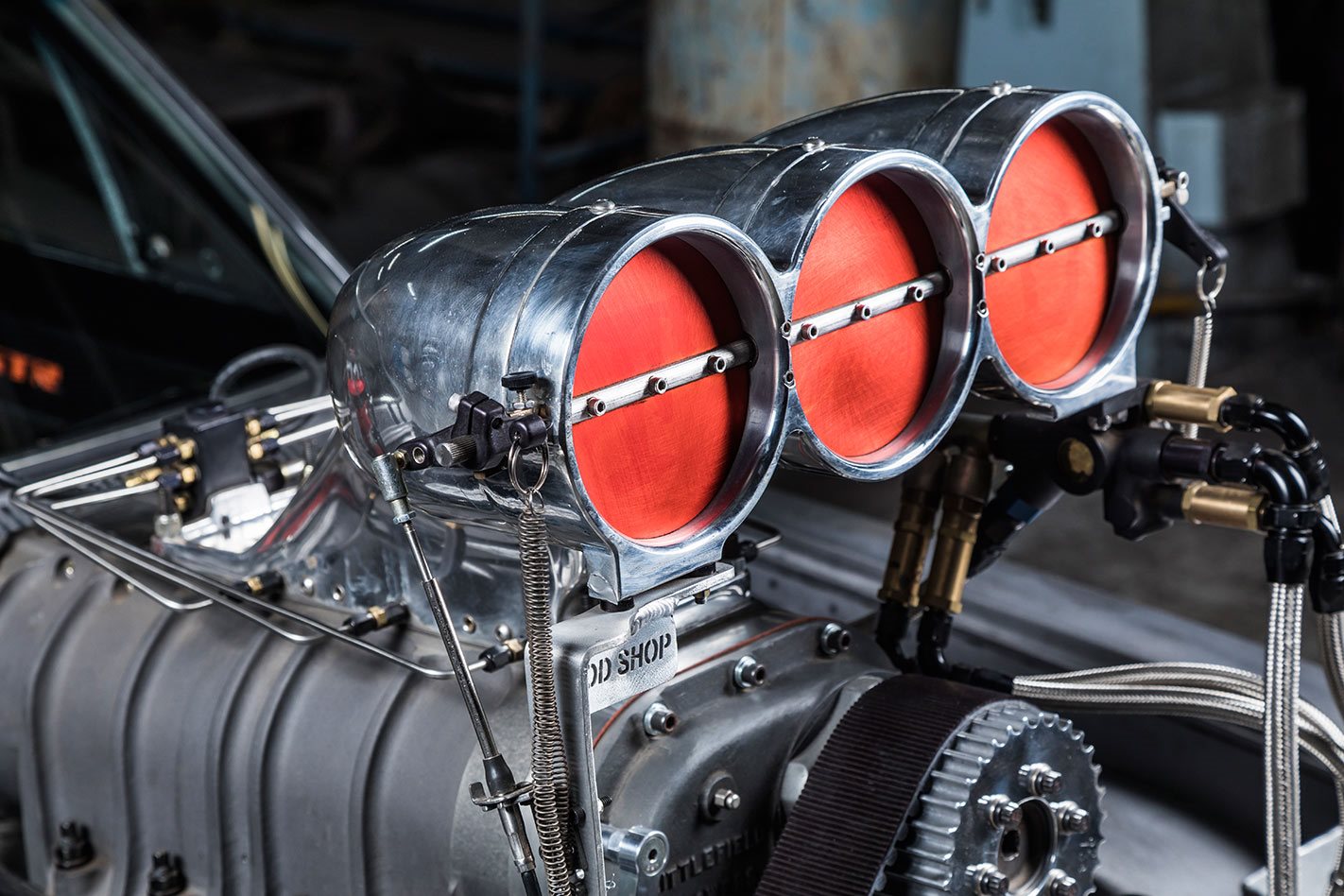 The basics are Dart block and Brodix alloy heads, JE pistons and a Comp cam. Ready for skids, it's packing 1950hp

So just three months before Summernats 30, Heath more or less relinquished ownership of the Torana, donating it to the cause of building a promotional vehicle for The Rod Shop. The car neatly showcases the business’s chassis components, though the lads bought in the engine and some of the brainpower to set it up.

“Obviously being new to burnouts, we were a bit unsure about which direction to go,” Heath explains. “We wanted a serious engine that was going to be reliable, and we had the philosophy that we wanted to pay for things just once. BNR Engines kept popping up, so we got the blower and the hat from the US – we get containers of stuff every four-to-six weeks – and contacted Brett [Niddrie of BNR Engines]. He did the whole lot; no dramas.” 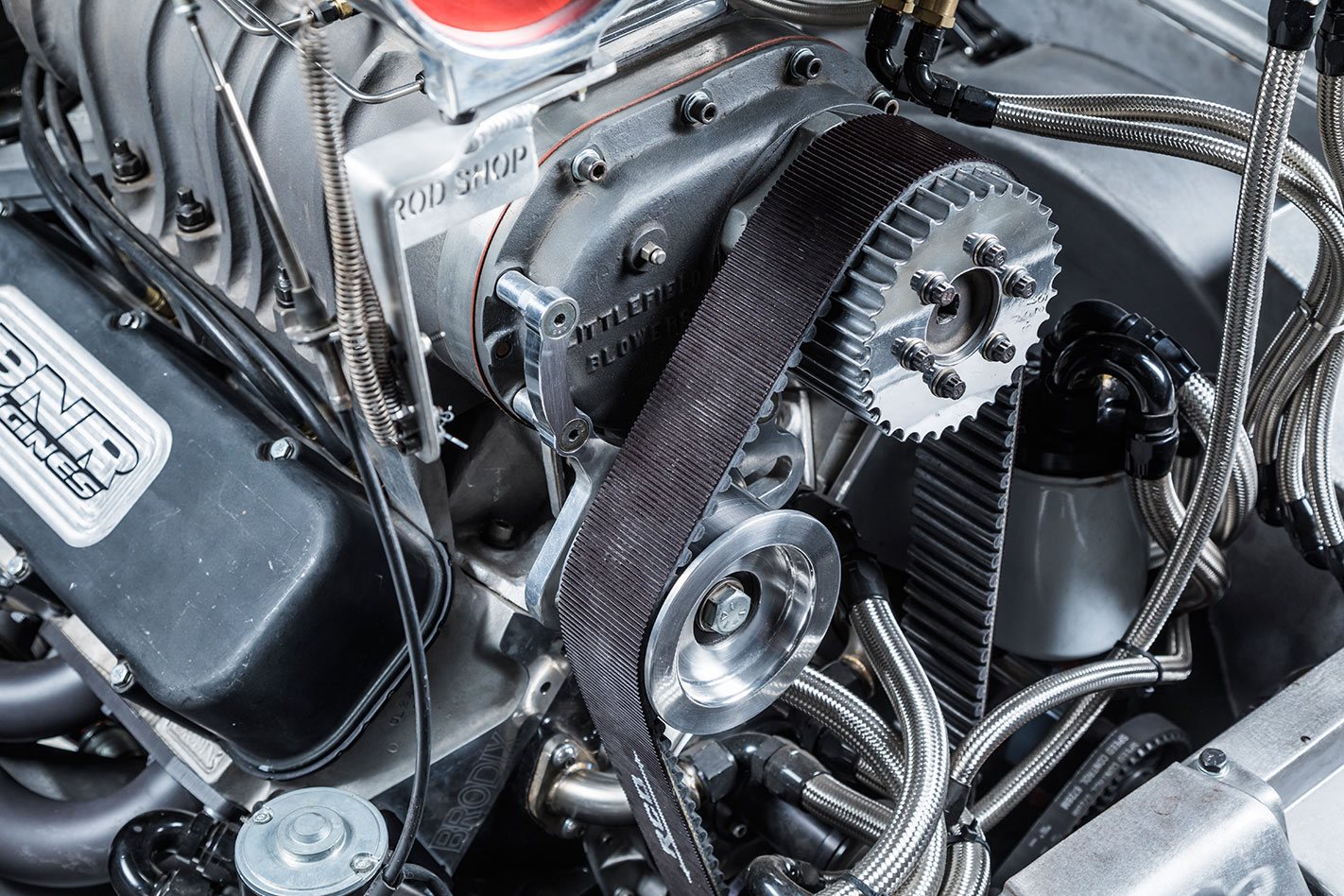 BNR had more than a dozen donks in the burnout comps at Summernats this year – including the Masters winner, KILLA-B – so you could say that Heath, brother Marc and the rest of the Rod Shop crew were sensible in choosing someone who knows his shit. 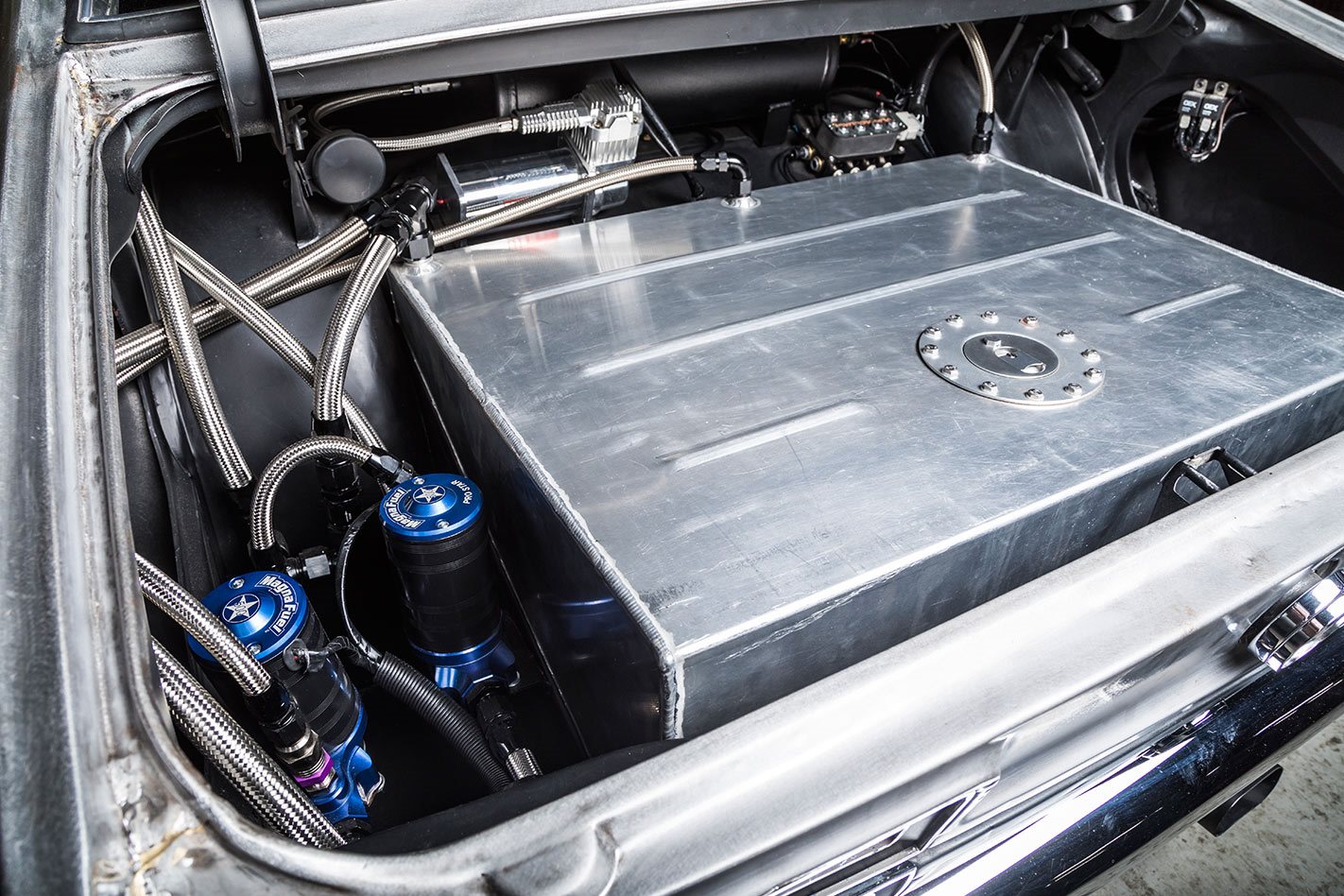 Brett’s formula is simple: “Use good-quality parts and do it properly!” he says with a casual laugh. “No shortcuts. I specify that the car comes to me so I can set things up – fuel systems and the like. That is all essential for the life and reliability of the motor. You can’t just shrink-wrap a motor and send it out; you need to do things a certain way or not at all.” 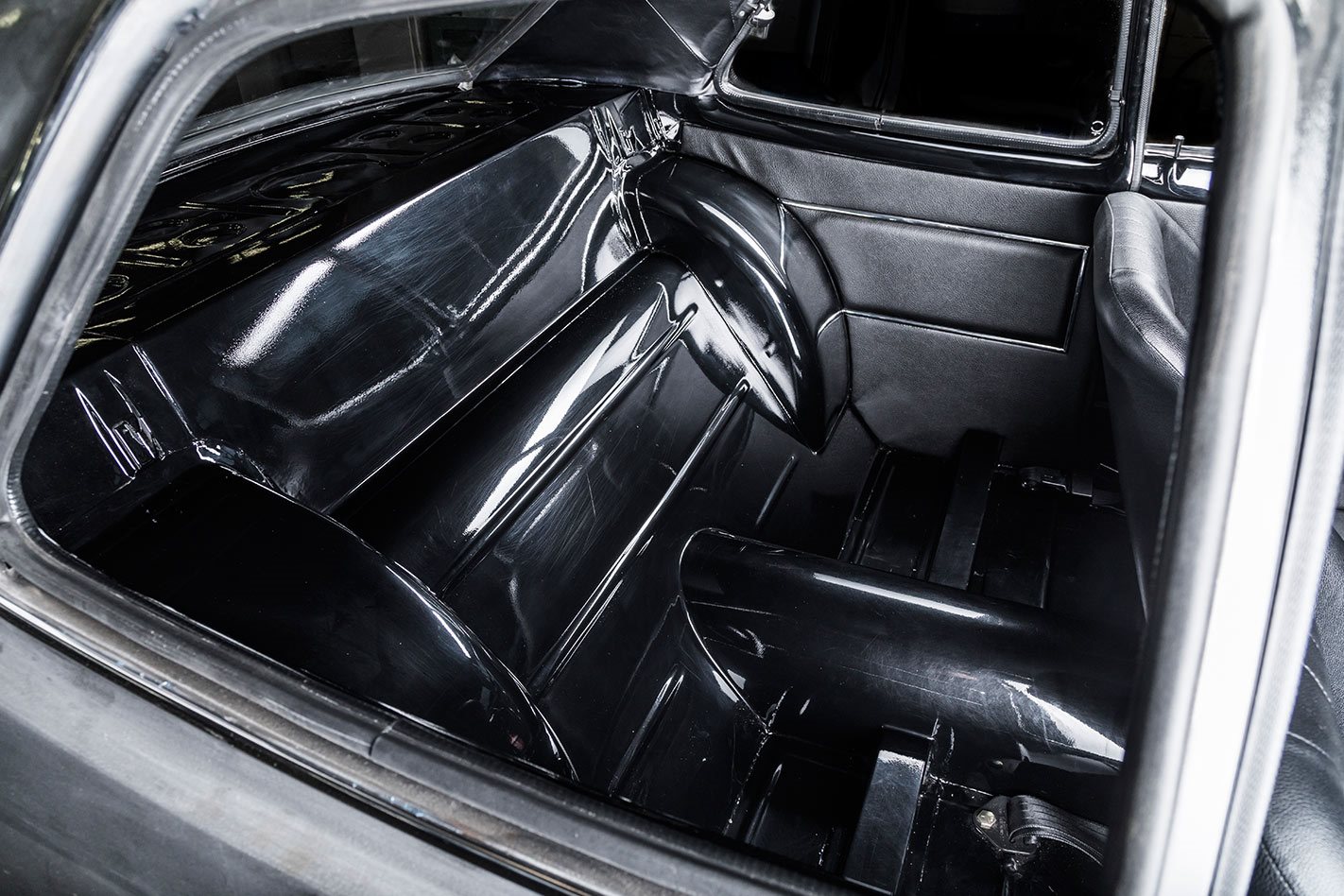 The motor in the Castlemaine Rod Shop Torana had seen previous service on the quarter-mile, and as Brett explains, there are a lot of similarities – and yet a lot of differences – between a drag and a burnout engine. 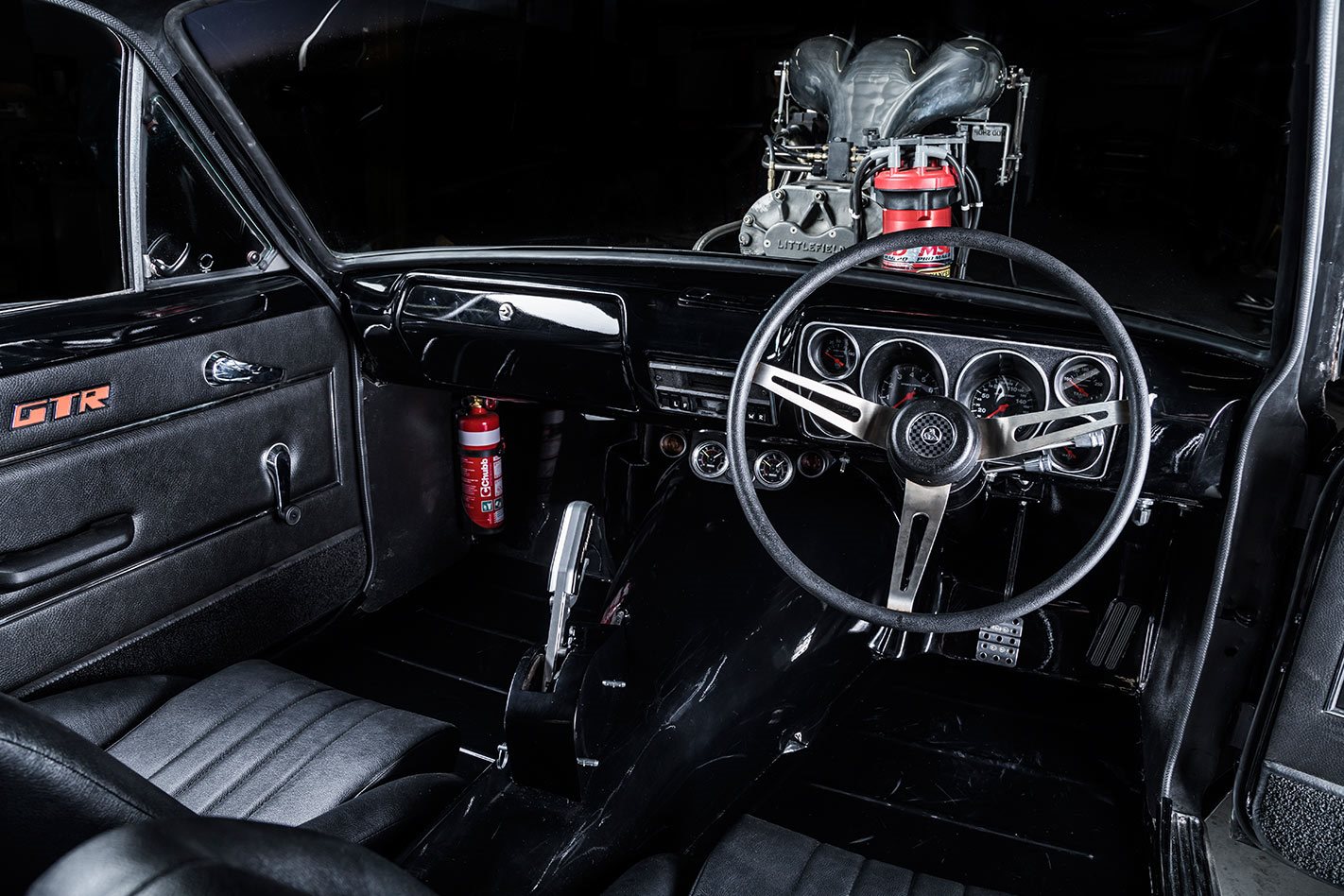 The dashboard might look standard, but Torana fans will notice that it’s missing the traditional LC dash pad. Instead, the top half of the dash has been fabricated in steel to mimic the lines of the factory padding. This meant that the standard instrument cluster, glovebox and even the ashtray could be retained, alongside the iconic GTR steering wheel

“I sourced this one second-hand,” he says. “It was originally built in America; I don’t know who built it but it was full of the good stuff. I re-specced it – such as changing the camshaft – and rebuilt it to suit burnouts.” 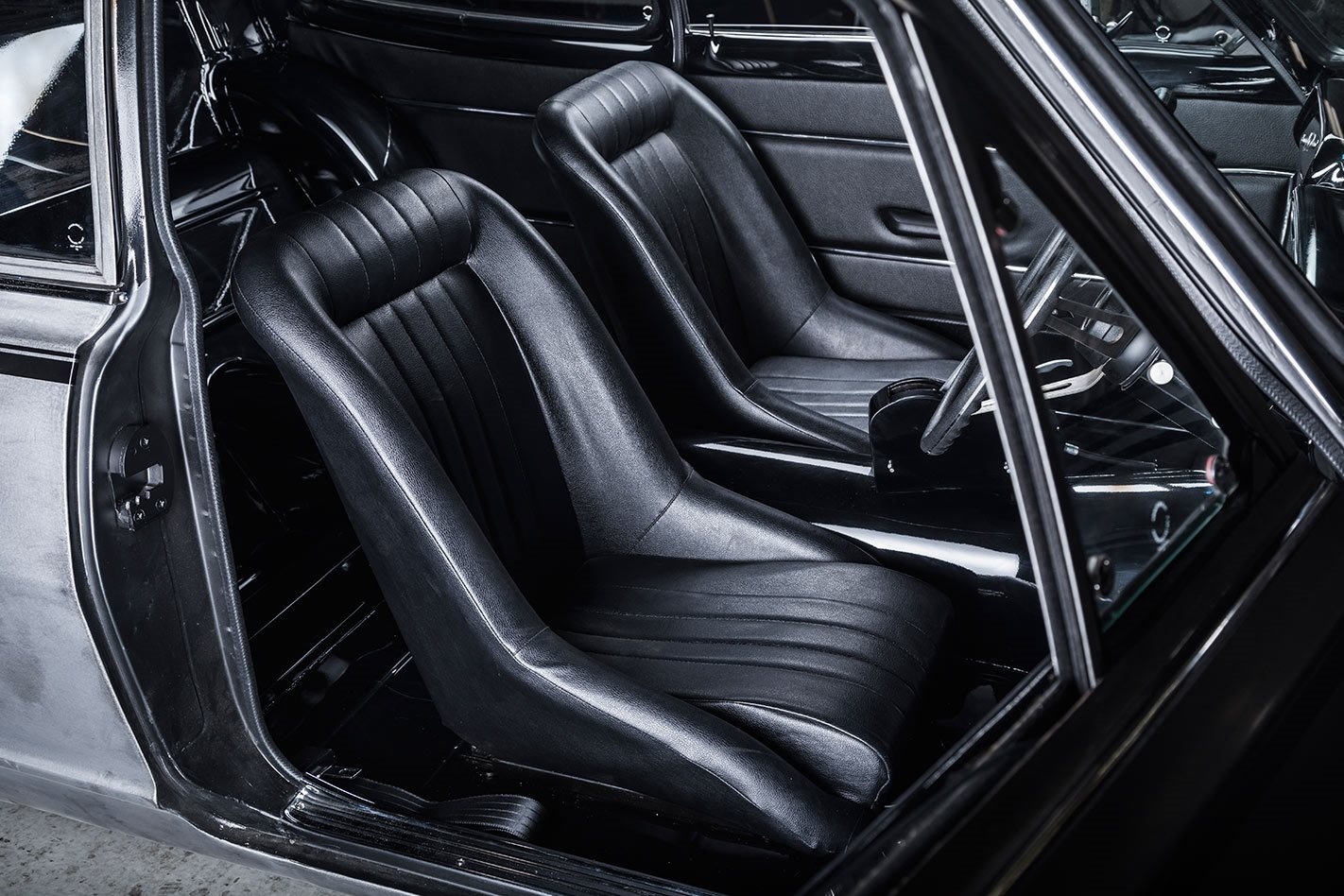 The blower is a 14/71 high-helix Littlefield pump. “It’s maybe overkill, but it’s not being stressed,” Brett says. The 568ci Dart-blocked mill runs on methanol and chugs around 60-70 litres of it per skid – so, just shy of a litre per second!

Heath laughs as he describes the big block-based result: “Huge cubes, 14/71 blower, and a couple of thousand horsepower; we wanted to build something noticeable!” 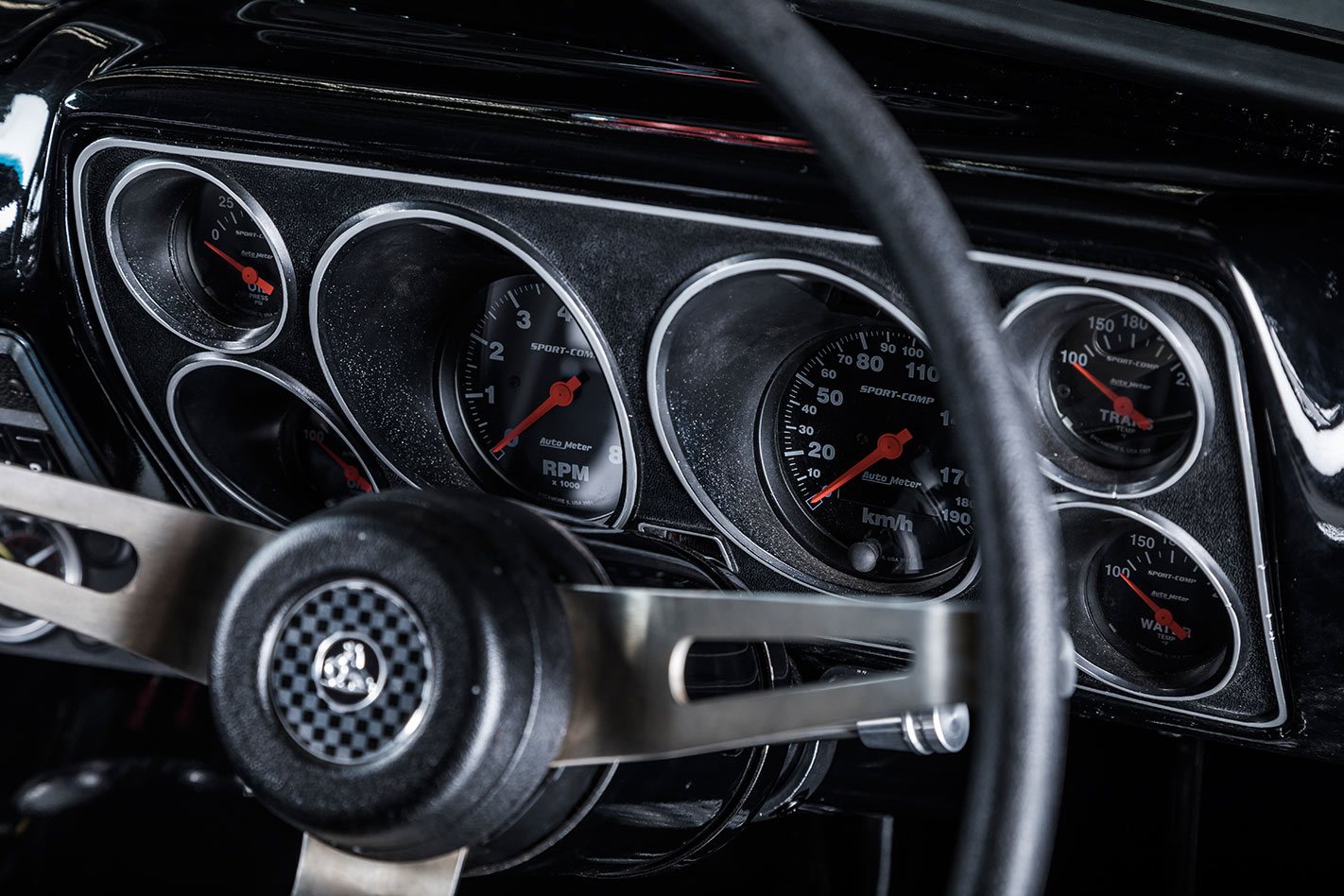 And based on the hype the car has generated at events and online since being completed, if there’s one thing The Rod Shop’s Torana can be called, it’s ‘noticeable’!