Big things come in small packages and with a 600hp rotary under it's tiny bonnet, this Austin really powers!

THERE’S a little old man in Randwick, Sydney, who’s not too happy with Peter Jackson right now, because when Pete finally convinced him to sell his 1953 Austin A30, it was on the proviso that it was restored to original condition. Now, we’re not saying Jackson deliberately deceived the old bugger, but he didn’t exactly say what he had in mind for the rare two-door Pom-mobile either. One thing’s clear, though, it’s nothing like what its former owner had in mind. 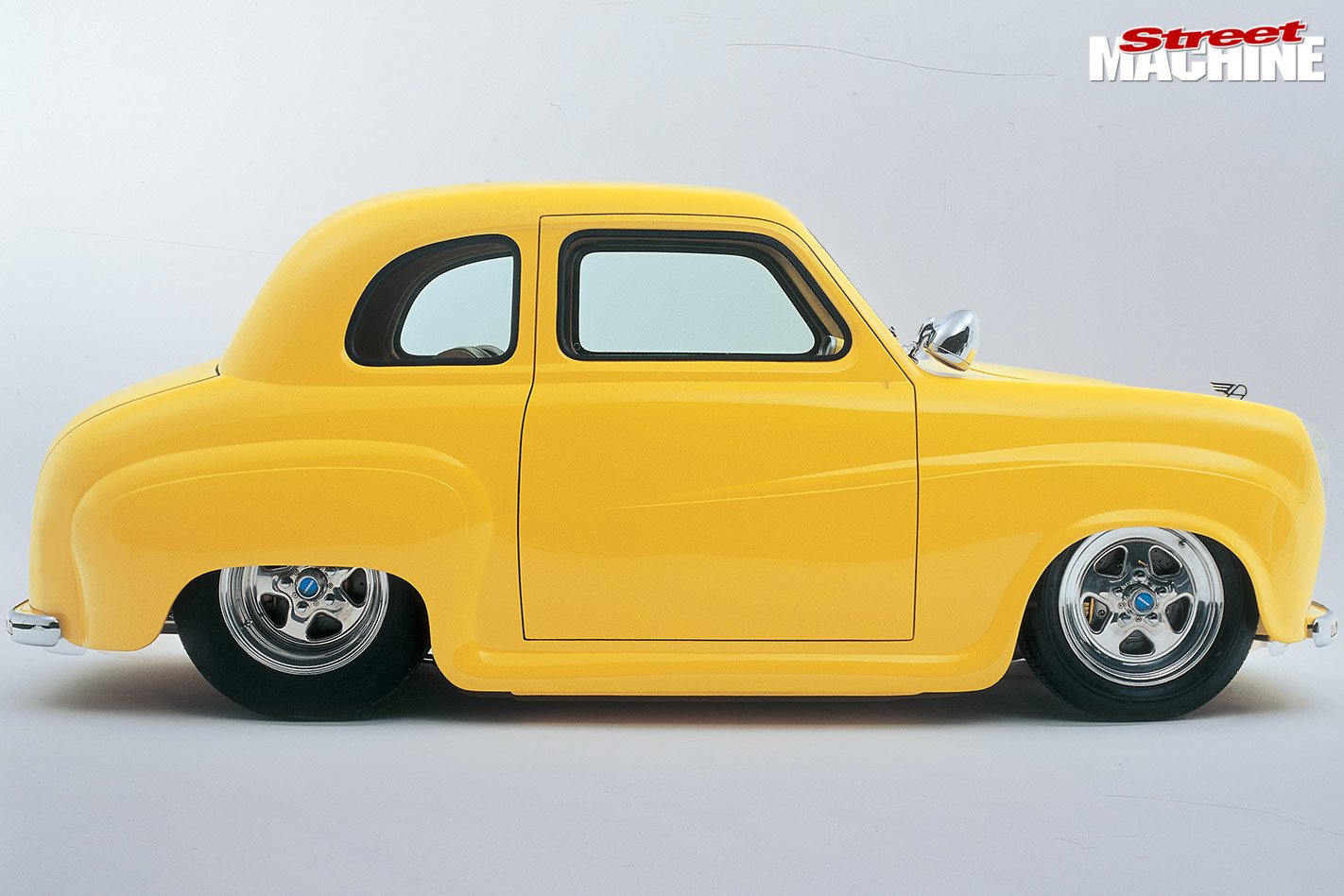 From the start Pete, then just 18, knew what he wanted: something different from the packed car park of look-a-like hot Toranas. Four years later, his vision of a chrome yellow, rotary-powered ‘mini cab’ paid off big-time at the Summernats. Judges were bowled over by the A30’s concept and execution and he picked up Top 10, PPG Supreme and Phantom Judge’s awards. And this was his first car!

It sat in the driveway for a couple of months after he paid $900 for it, and then his brother convinced street machining legend Paul Bennett to take a look at it. Originally Bennett was just going to tub the car, but you know how these things go. 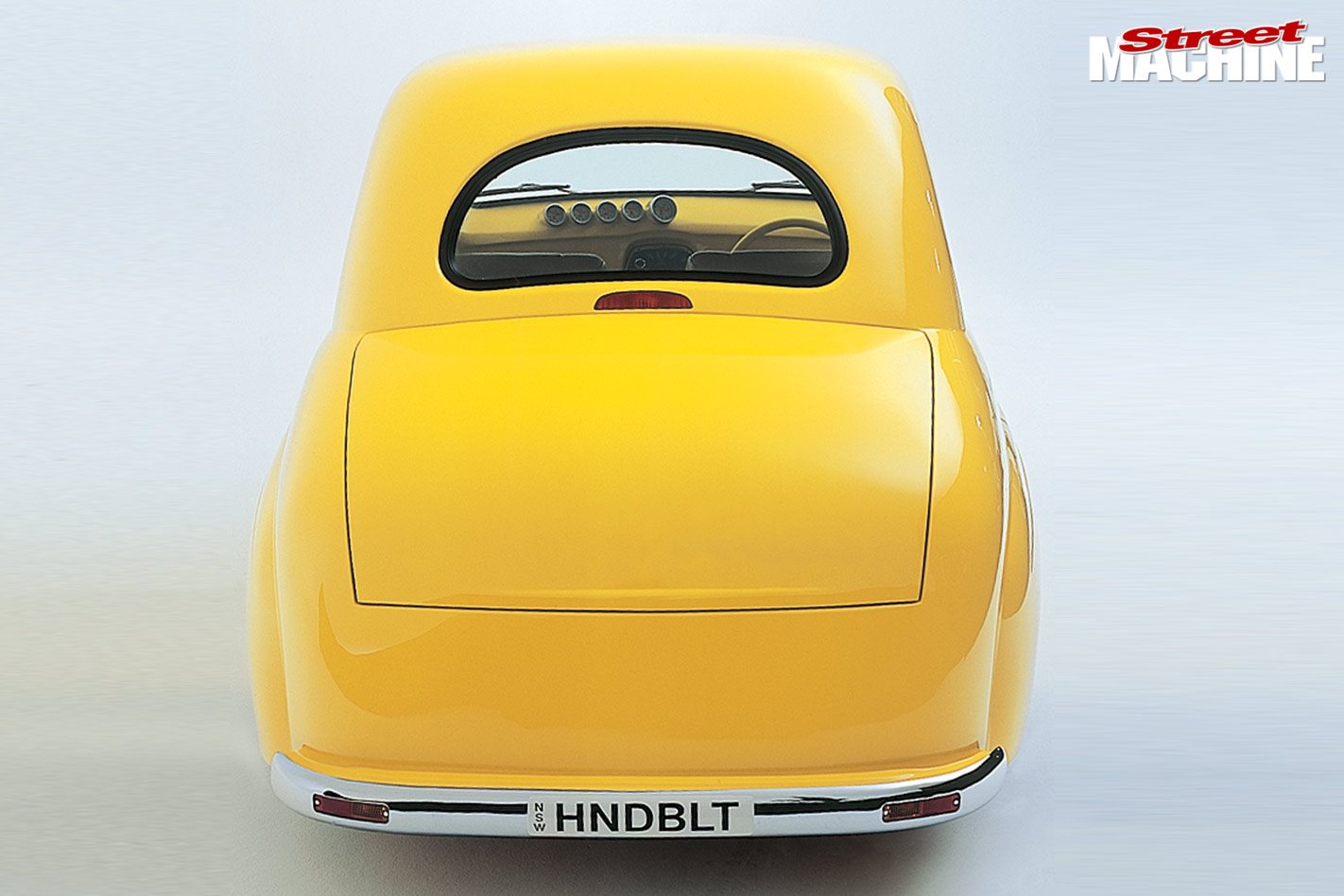 But, why such a small car? Was it easier to build? 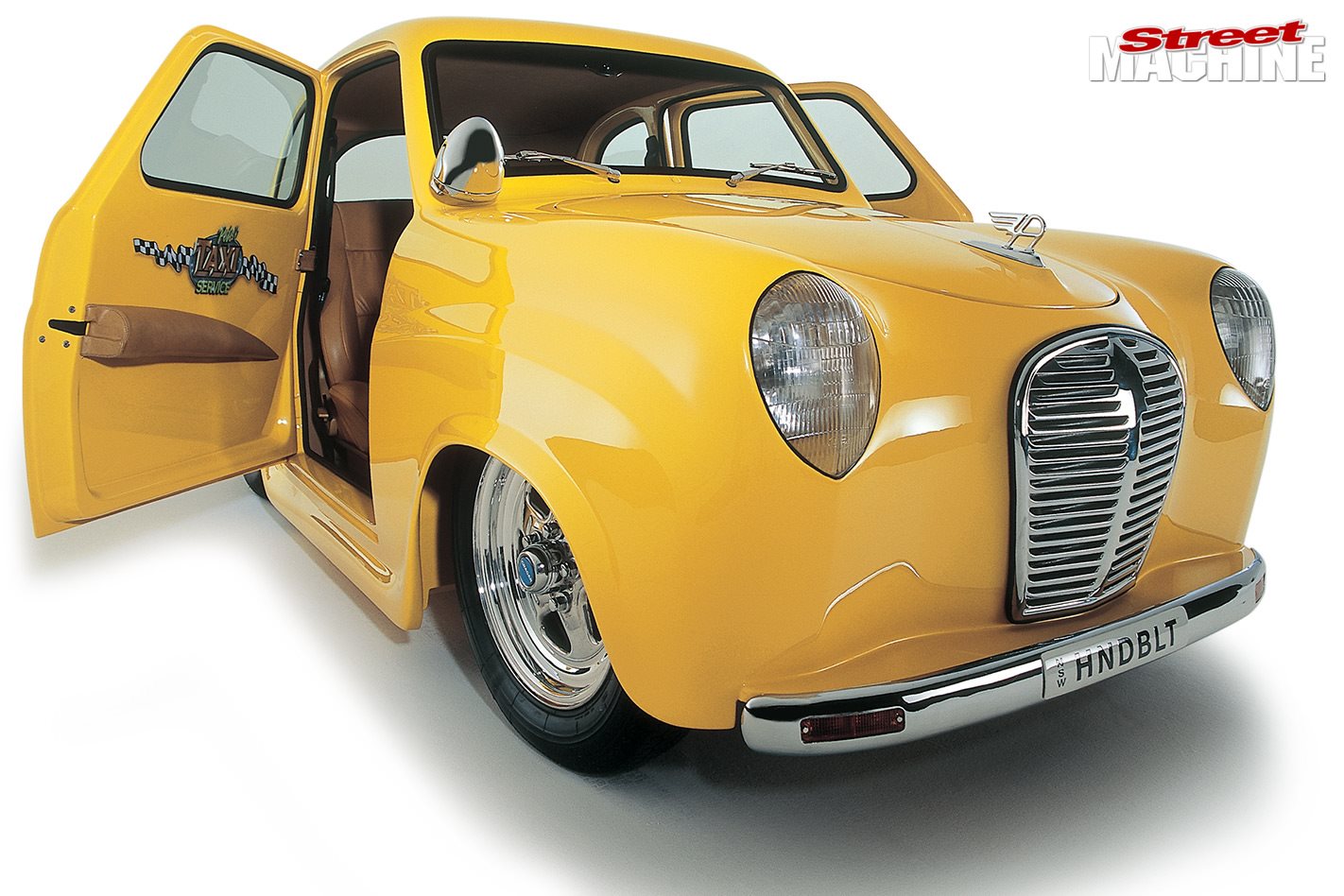 “Definitely not!” Pete laughs. “Everything is so tight under the car and it was just so hard for Paul to work on the chassis. He said it was the hardest car he’s ever tried to build. Everything had just 1-2mm clearance.”

Bennett was responsible for the chassis, tubs and all major body mods but, being a bit of a traditionalist, he also tried hard to get Jackson to ditch the rotary. 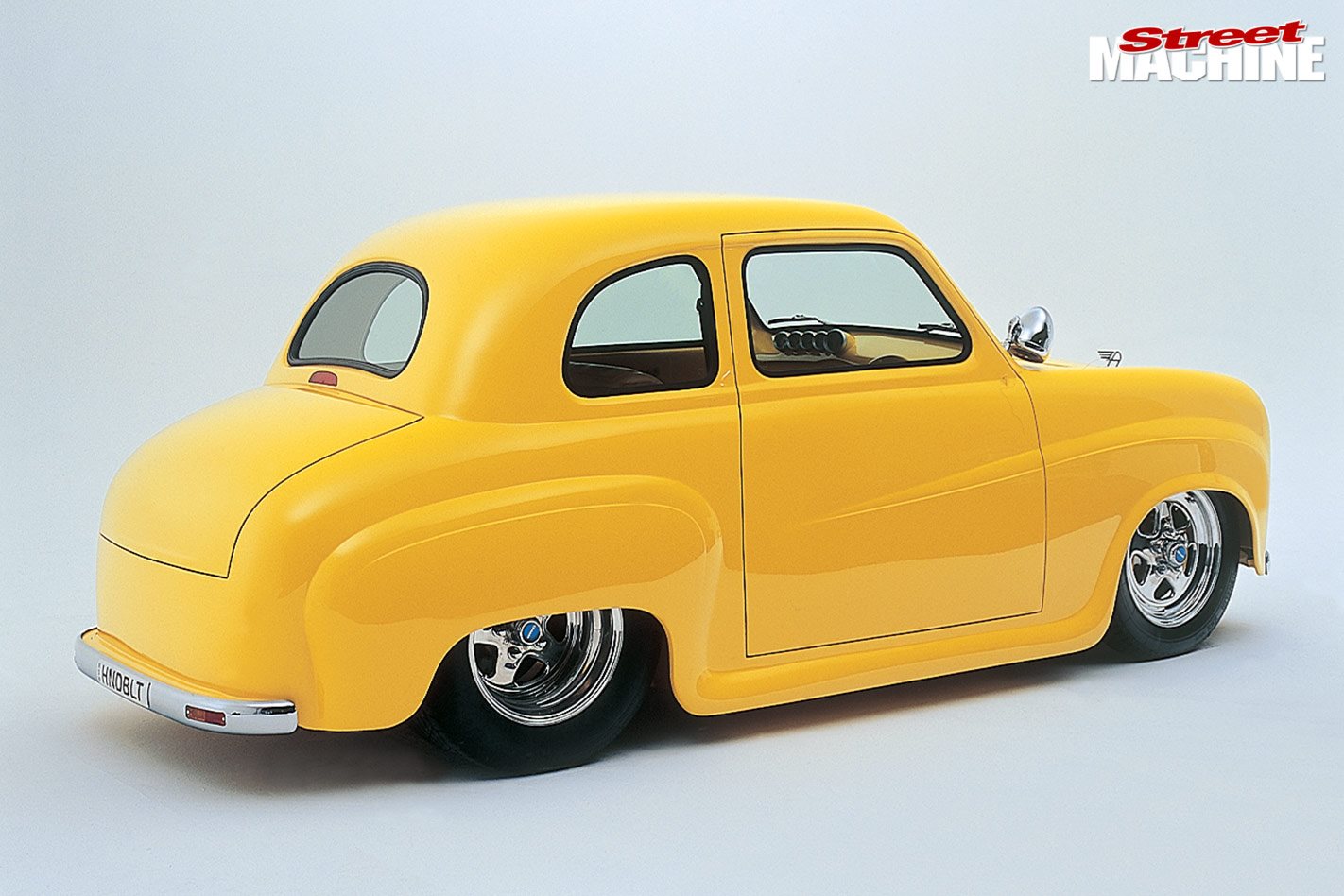 “The rails were actually set up for a small-block,” Pete says. “Paul always thought I’d can the rotary; I guess he thought no-one would spend this sort of money and put a rotary in. He tried to change my mind but if I’d done that I would have fallen into the trap of using a common engine. I wanted to do something that no-one else had been game to do.”

At the Summernats, Pete’s Taxi fooled onlookers, once the bonnet was popped. “A lot of people thought it had a Lexus V8,” he says, referring to the black engine shroud and polished intake runners. But Pete had always wanted rotary power, and not just any old Wankel donk either. The plastic cosmetics hide a fire-breathing, big port, Series VI turbo Mazda 13B. Tuned by Robert at Tony Rigoli Performance, it has been dynoed at over 607hp at the flywheel running on just 22psi boost. That is serious grunt in a car that only weighs around 1000kgs. 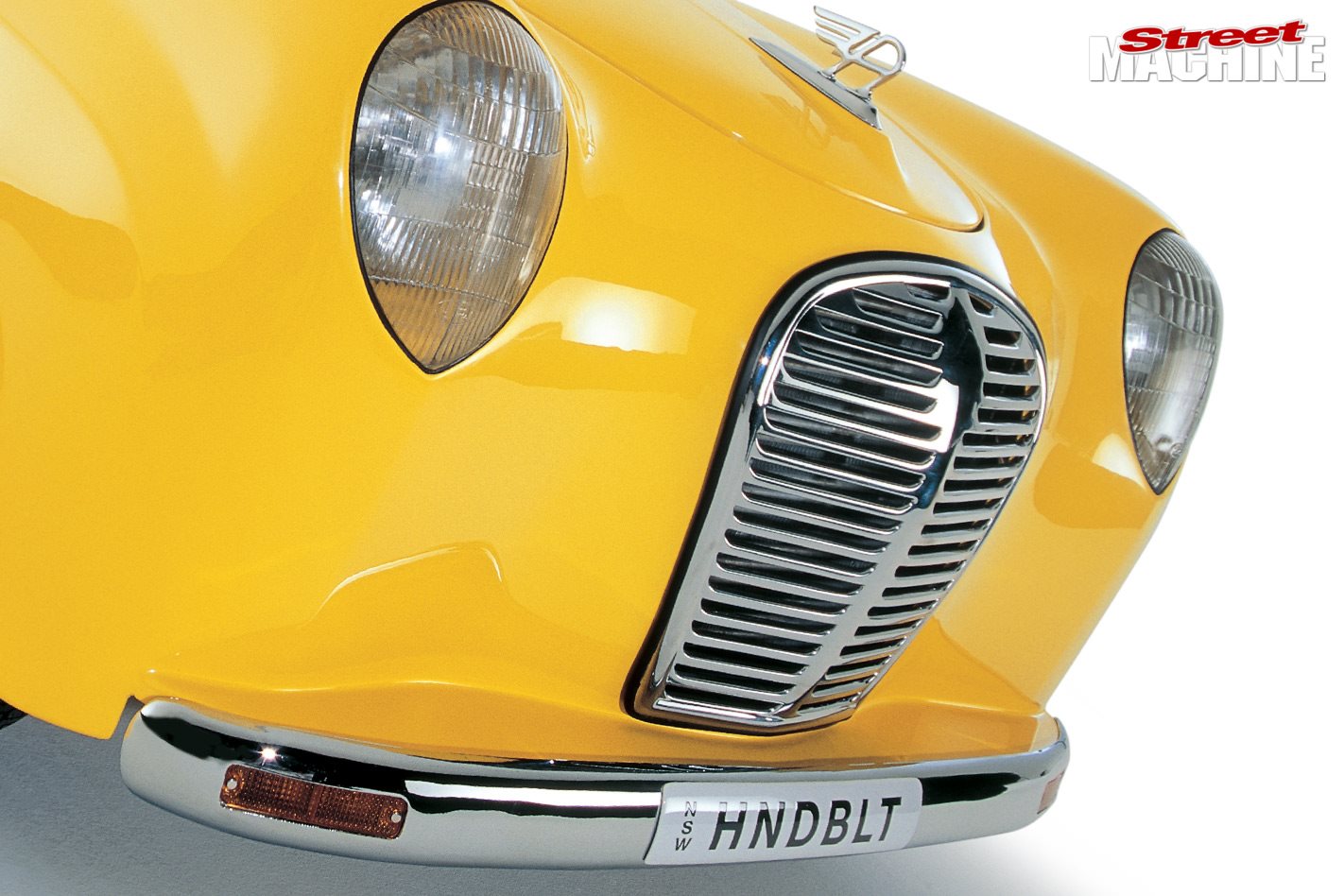 “It’d be one of the most powerful 13Bs in the country,” Jackson says proudly. “I’ve only ever given it one hit from first to second and even with only five pounds of boost it spun the wheels the whole way.” Pretty good when you consider the 13B’s displacement is just 79 cubes!

The taxi theme was there almost from the beginning, but once again Jackson didn’t want to follow small show car norms.

“Originally it was going to be painted like a full New York taxi, stickers down the side and airbrushed. But I didn’t want to fall into the four-cylinder airbrushing scene either, so that’s why we only airbrushed the inside of the doors. The body was so smooth; airbrushing would have spoiled it.”

Bennet picked up the vintage taxi meter – a genuine 1950s example – at a swap meet. It lights up and spins, showing shillings and pounds, but is not connected to the speedo. 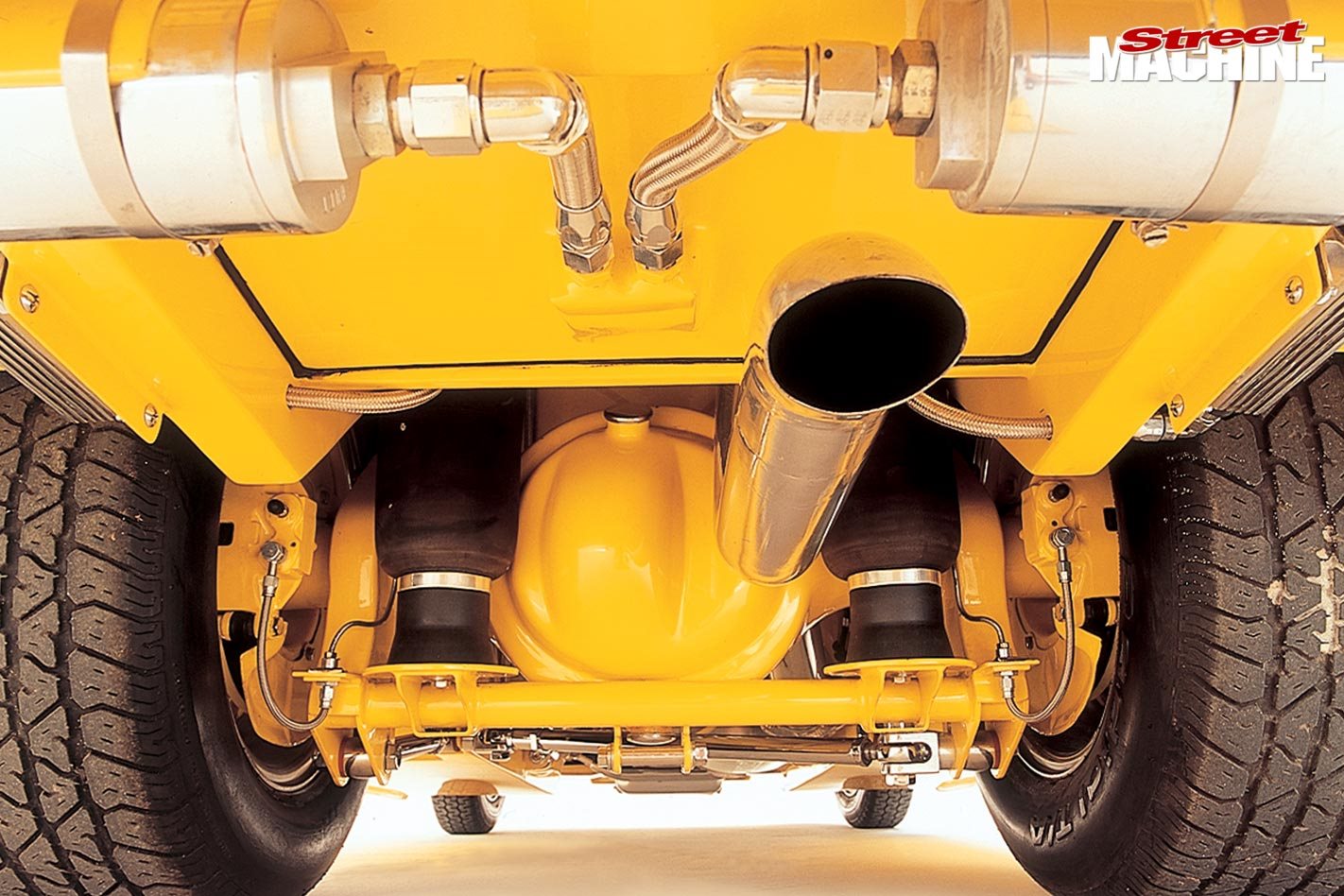 The A30’s original centre dash remains, adding to the funky 50s feel but, ahem, that row of Auto Meters looks a bit out of place Pete.

“I don’t like them but I need them because of the rotary having 600hp. I couldn’t risk the engine; they’re definitely not there for looks. I would rather have had nothing, just the original steel dash gauges.” 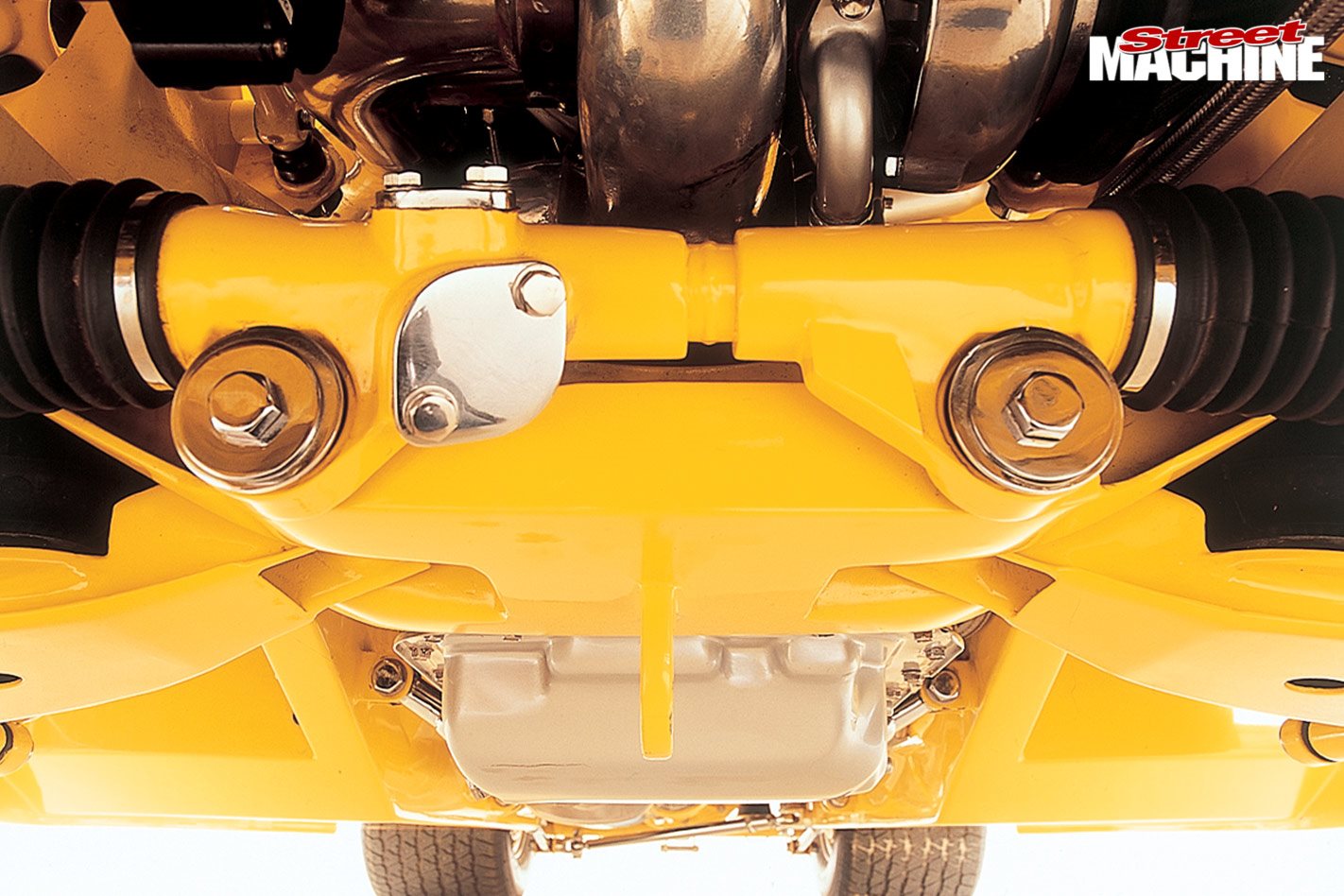 Apart from its horsepower, everything on the A30 is small. For example, the tailshaft is only 400mm long! From a practicality point of view, the super-low ride height was a worry, too, so Pete specified airbag suspension from Air Ride Technologies.

“It drives really smooth, it’s like floating on air,” Pete says. “You don’t feel bumps. But basically we fitted airbags so I could drive it. When it’s dropped, it sits so low I couldn’t have even got up the ramps at the Summernats.” 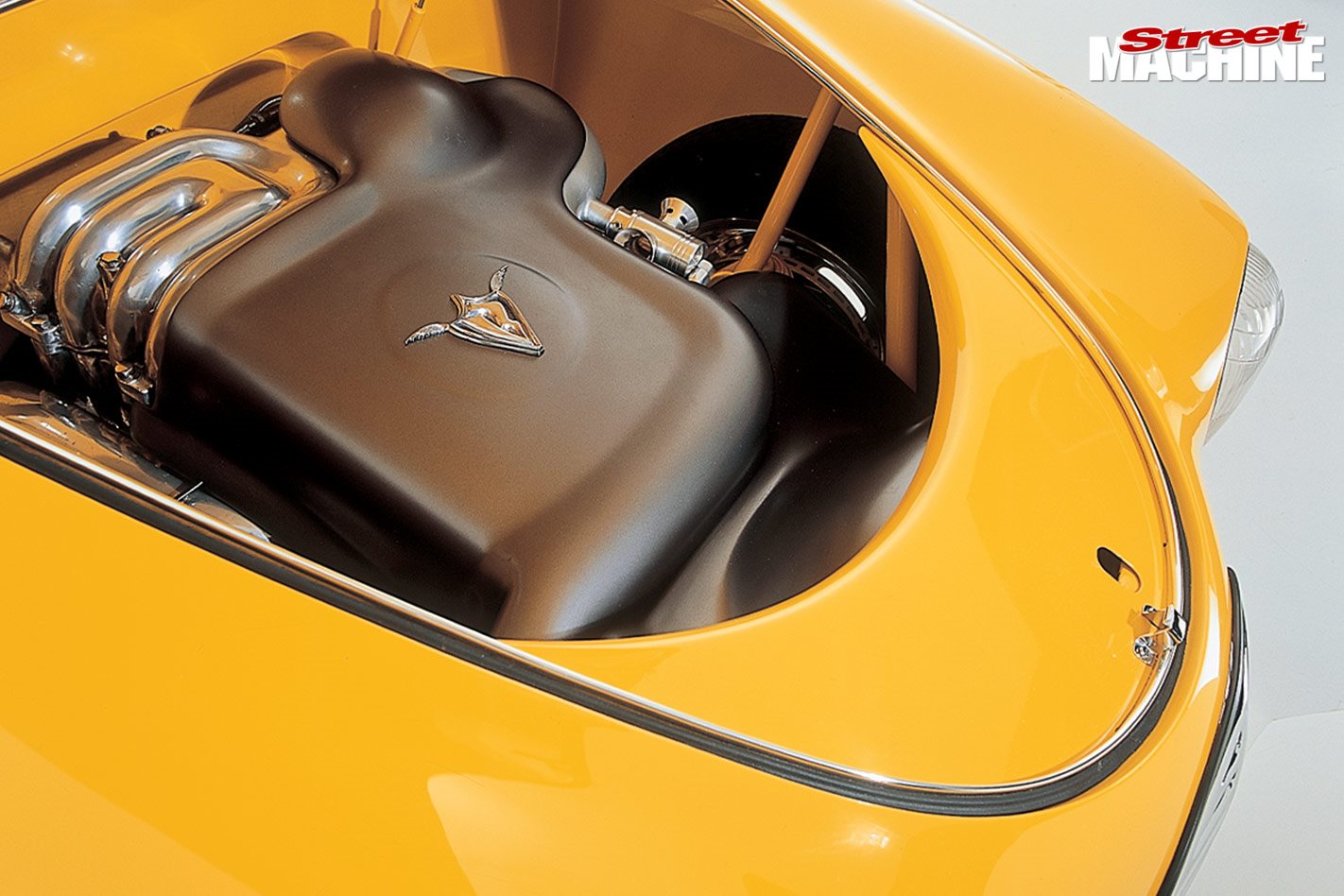 Pete, a plumber by trade, spent a motza on the A30 but also put in his share of elbow grease.

“There was no sponsorship whatsoever, I put in every cent and paid full price,” he stresses. “I did all the running around and finished the car with David Khoury, who painted it. We fitted the car together at the end. We probably spent two years in the garage working on it, painting it and reassembling it.” 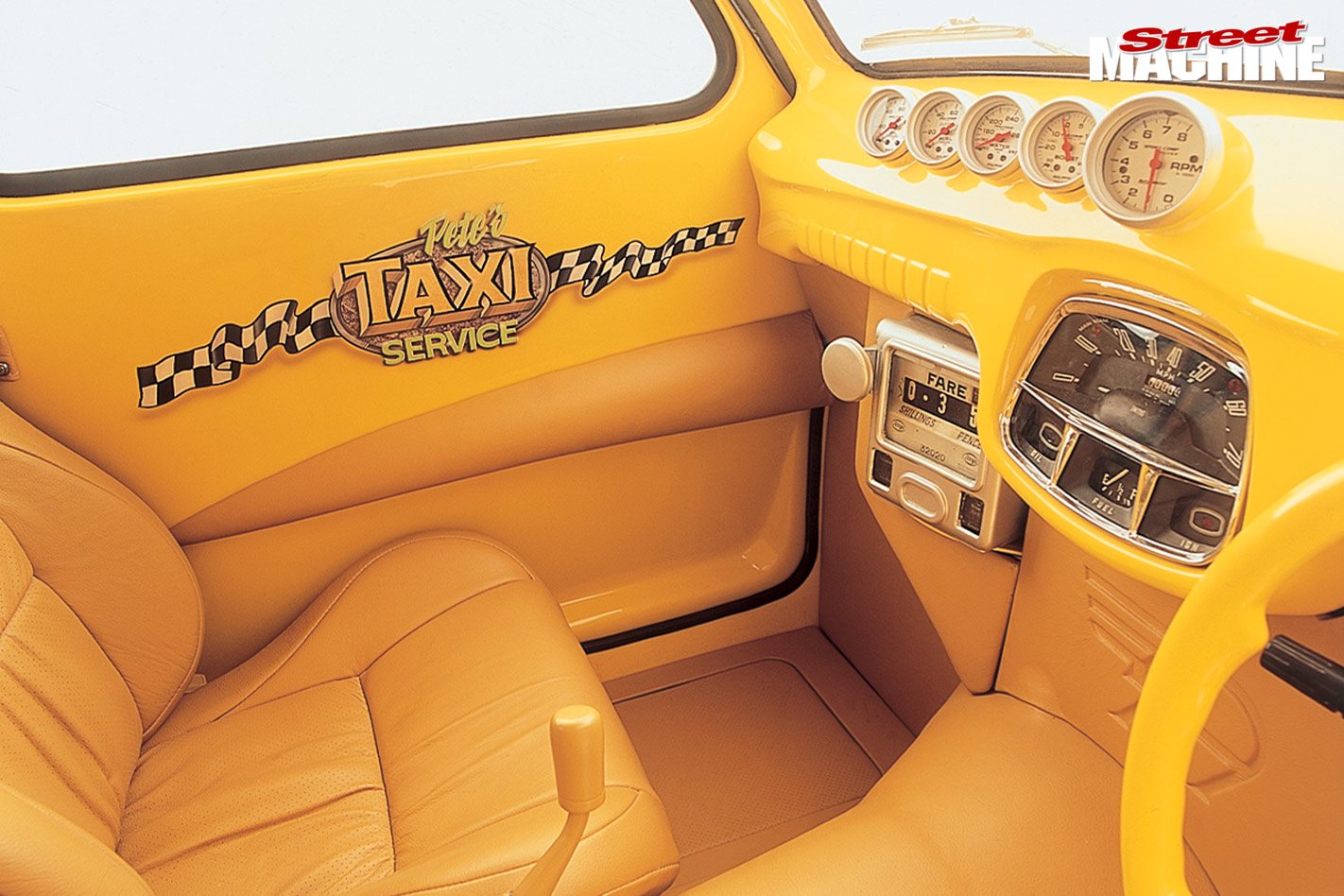 But the reaction from people has been worth the lost wages and sweat.

“I thought people would turn their noses up at it – especially when they found out it was a rotary – but they were really good, I was pretty surprised,” Pete says, a bit relieved. “They freaked out in scrutineering, though, a lot of people were really shocked by the car.” 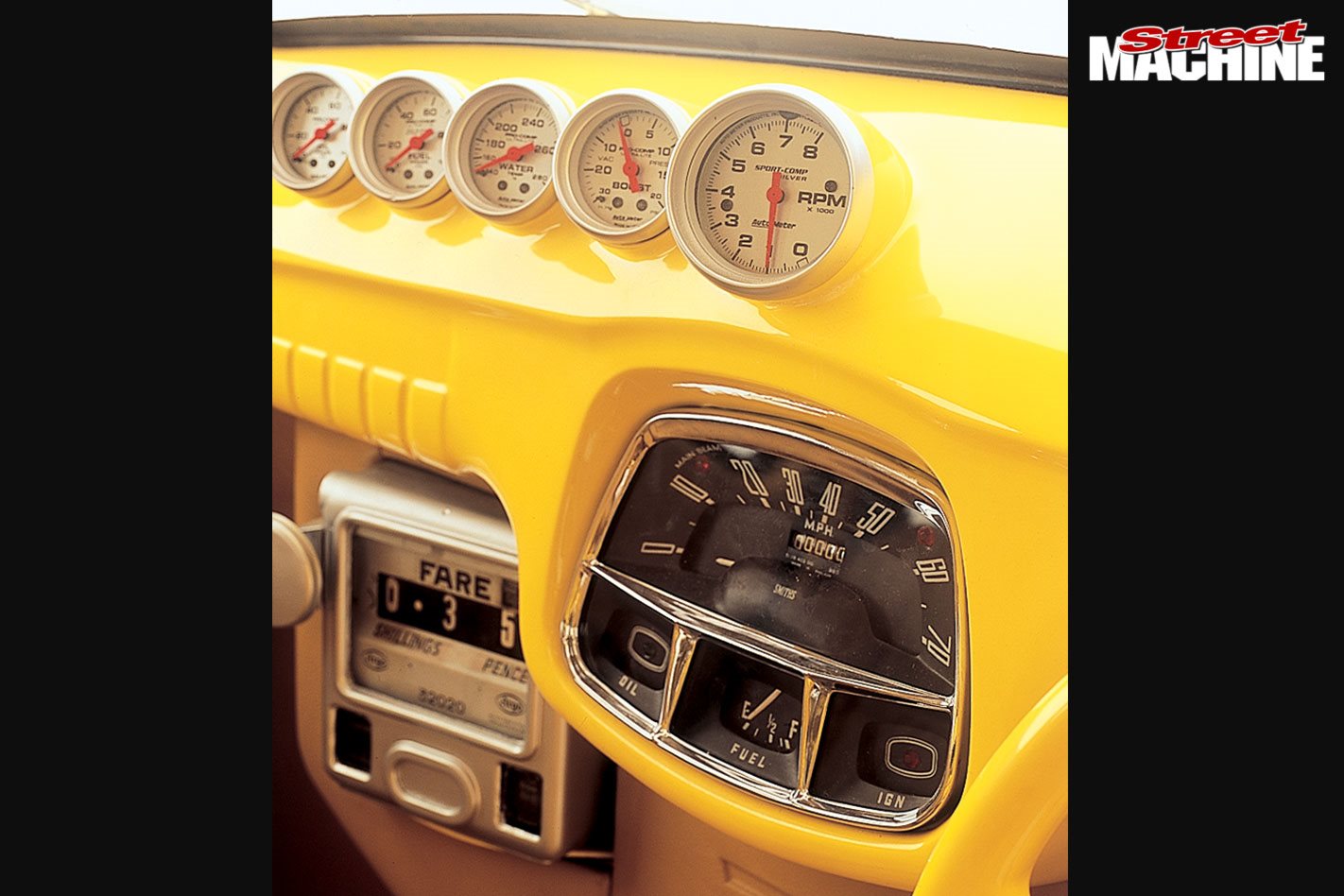 So has Jackson been back to show the little old man how his car turned out? “Definitely not! I’m going to send him some photos.” Chicken!

Pete’s Taxi is for sale but after spending in excess of $100,000 on it he expects it will end up in an overseas collection, unless the little old man from Randwick wins Tatts. Now there’s a thought! 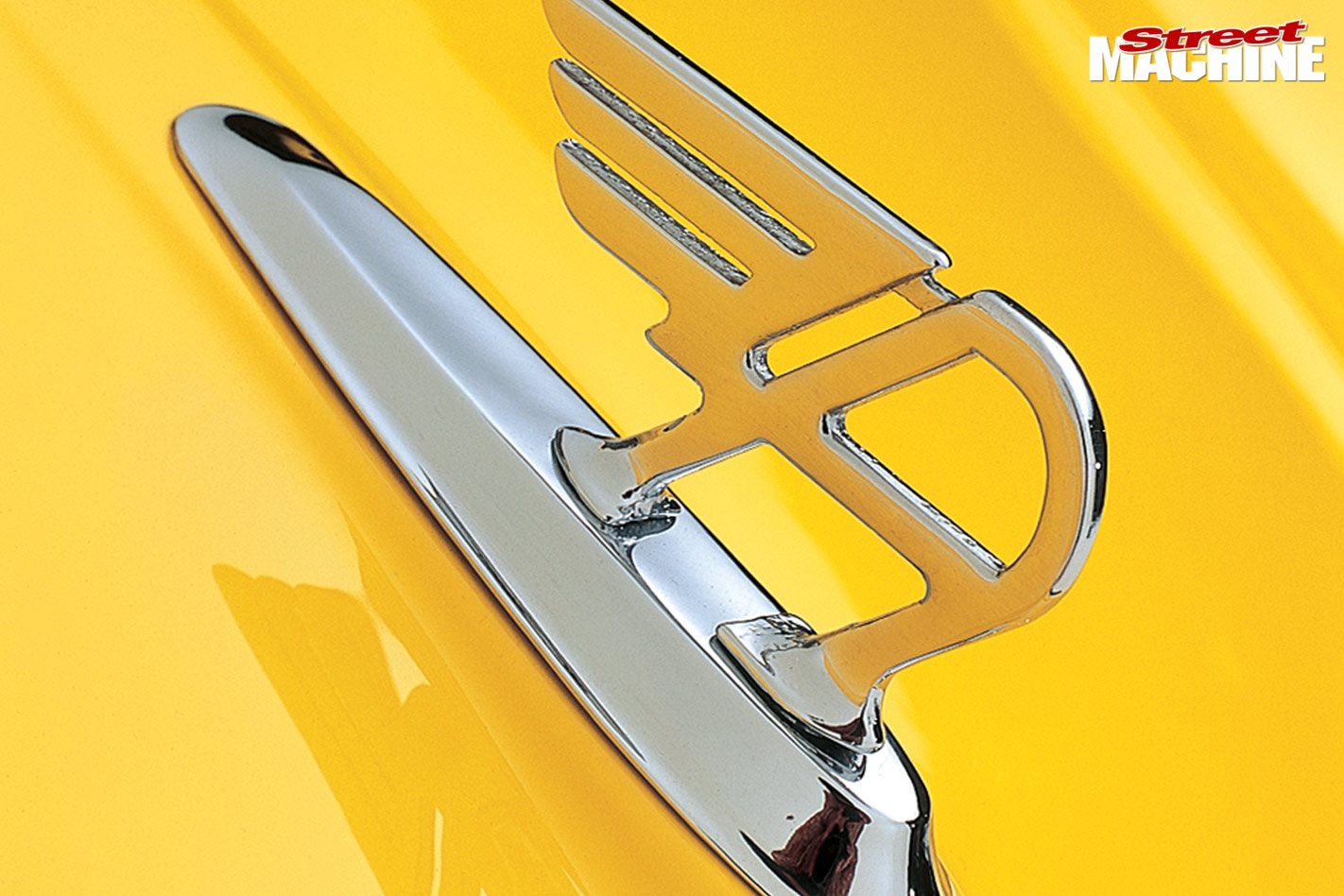 WHEN Morris Motors released its Morris Minor in 1948, it created a new benchmark for small cars and sent arch rival Austin scurrying to the drawing board. Three years later they unveiled their answer to the Minor, the Austin A30, powered by an all-new 803cc, four-cylinder, OHV engine known as the A-series. Ironically the A30’s new powerplant found its way into the Minor’s engine bay after the two rival companies merged in 1952 to form BMC (British Motor Corporation).

The A30 was a much smaller car than the Minor, its narrower body providing accommodation for four people and came only as a four-door saloon to start with. In 1953 a two-door version arrived and from 1954 a van and station wagon known as the Countryman were added to the line up. The little A30 sold well throughout its production life, despite its odd balance of modern styling and antiquated rod operated brakes, and was superseded in 1956 by the more powerful A35 after 220,000 units had rolled off the line. 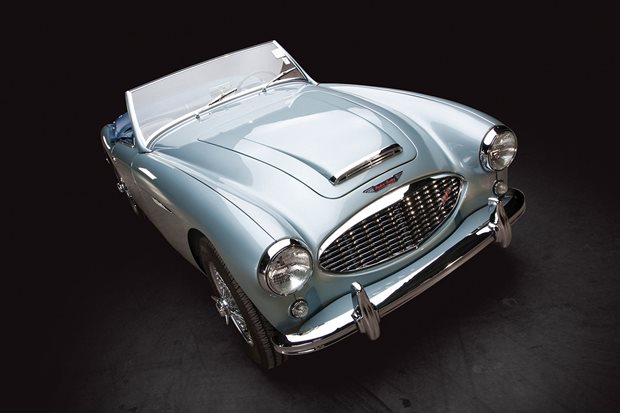