DURING the 2003 Canberra bushfires, some 500 homes were destroyed and around 70 per cent of the ACT’s pastures and forests were severely damaged. Over 490 people were injured, and several lost their lives. 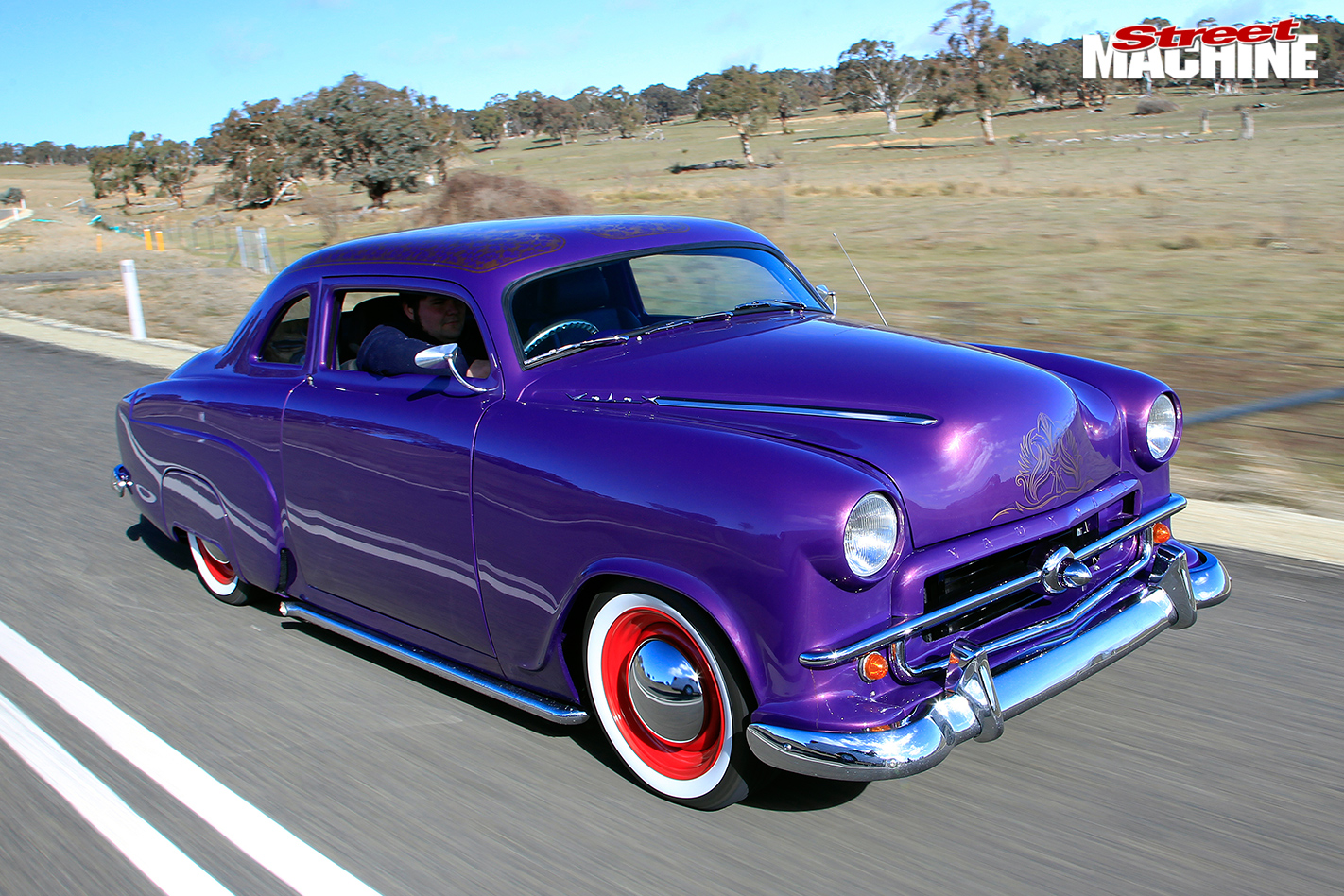 This 1954 Vauxhall Velox was another casualty. The unfinished father-and-son project was destroyed when the lethal firestorm swept through the nation’s capital. Although the car was salvageable, the pair were too distraught to tackle the rebuild and opted to sell it.

Nigel Ashton spotted it for sale on eBay, and noticed that500 it had already been given a two-door conversion, six-inch door stretch and three-inch roof chop. “The more I looked at it, the more I thought it could be turned into a mini-lead sled,” he says. So young Nigel asked his father Bill to bid on it, and lo and behold, they won the auction. 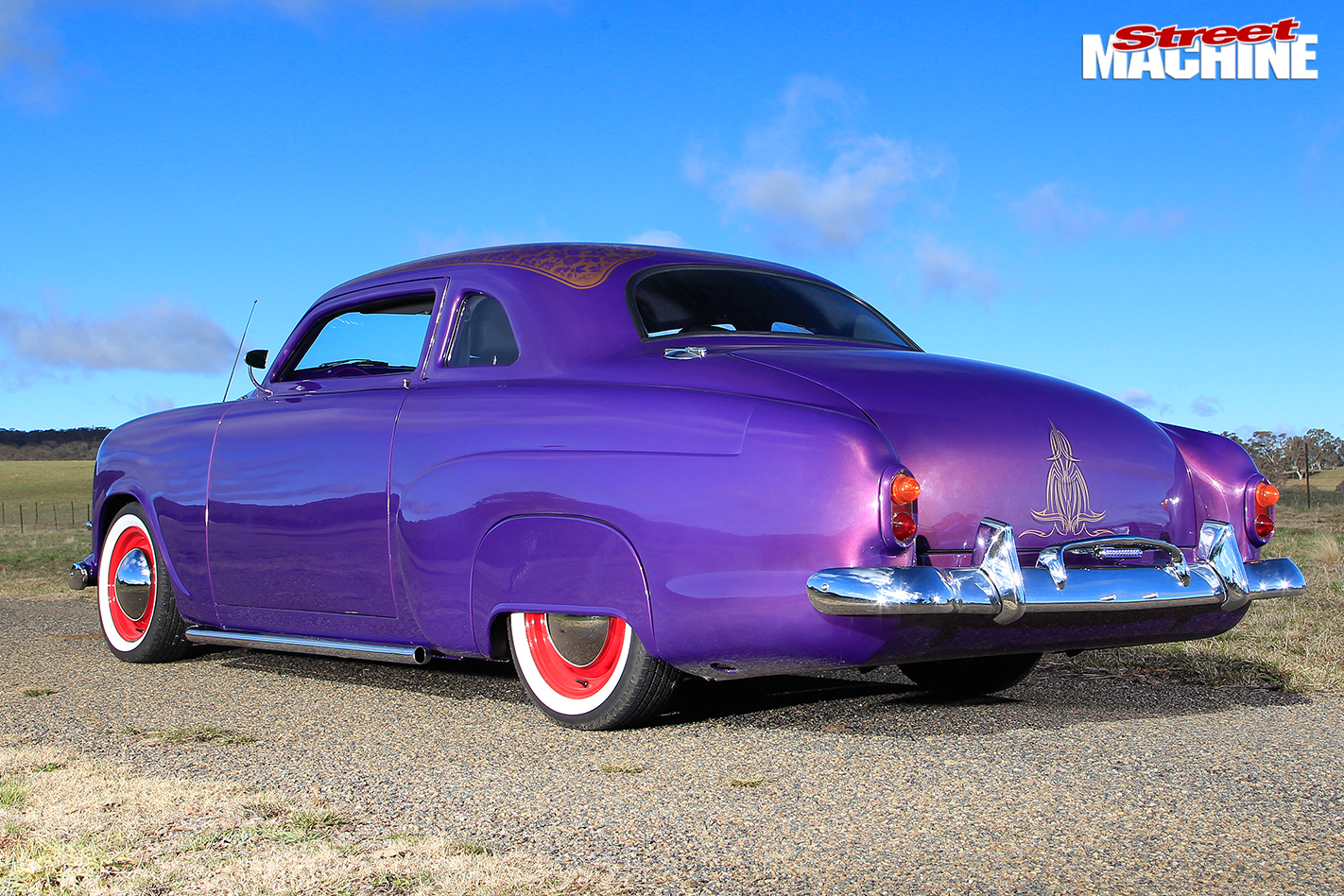 Buick rear fender sections help with the baby lead sled look. Spats are factory Vauxhall, while the bumper and over-riders are FC Holden. The lakes pipes are just for show

“When we saw it, it was completely gutted,” Nigel says. “The turret was warped and you could see that it had got so hot all the lead had melted out of the seams.” 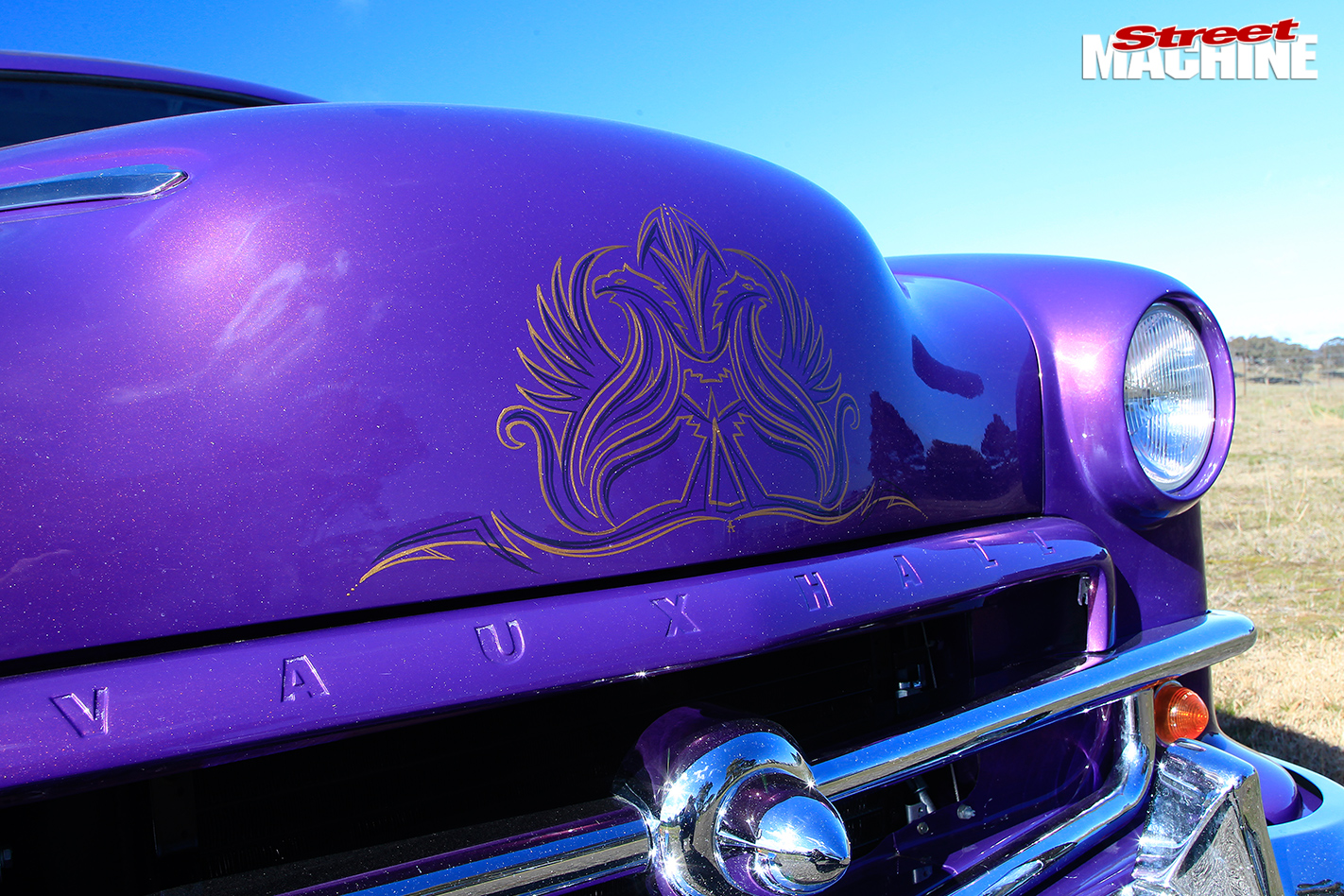 Undeterred, they hauled the Velox home to Gundary, near Goulburn in NSW, for a phoenix-like resurrection. But despite Nigel and Bill’s enthusiasm, the Velox languished in two separate shops for some years with very little progress. Fortunately, around three years ago it was delivered to Dave Hart. A well-known NSW hot rodder, Dave runs Kustom Concepts, and he pretty much built the whole car. 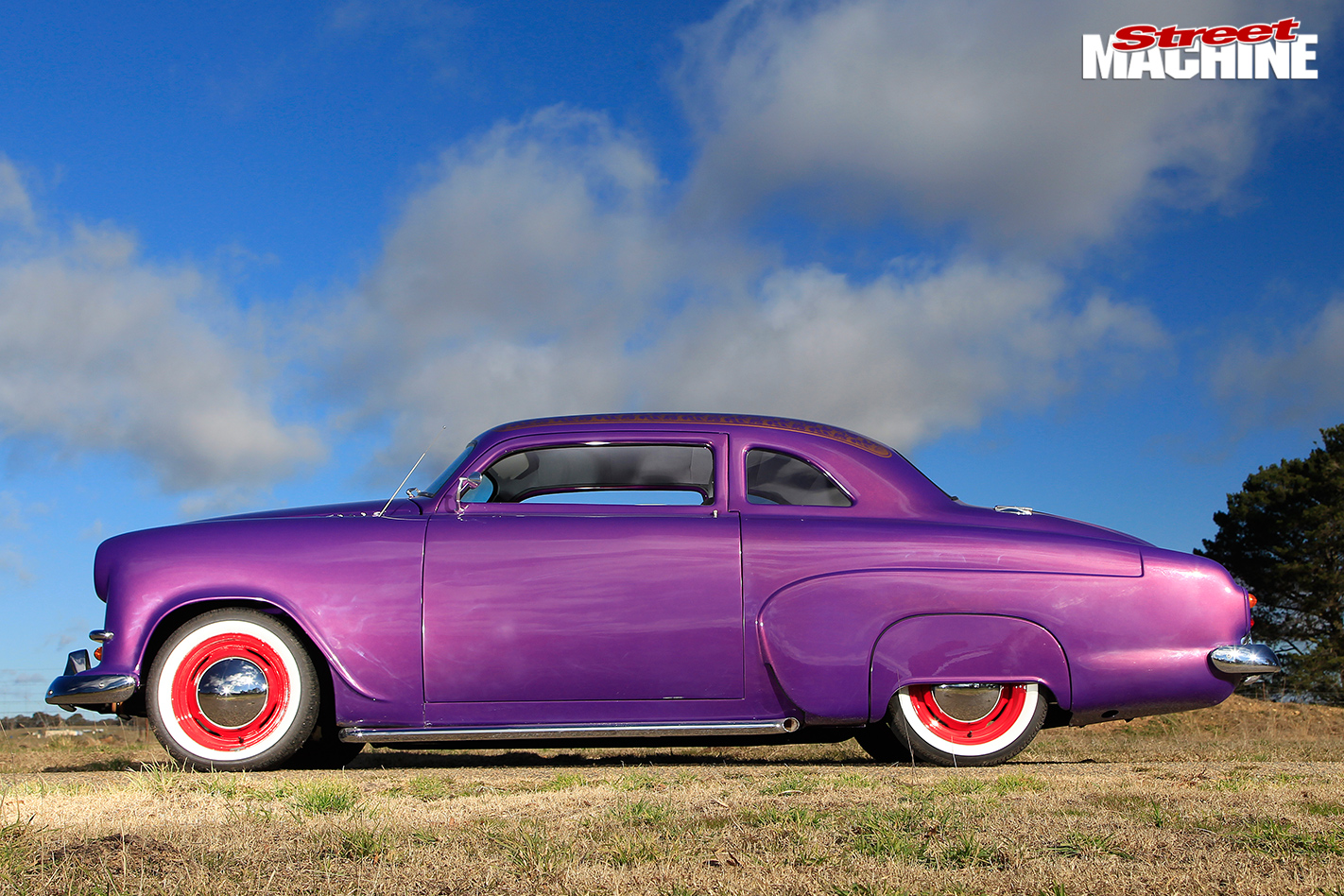 “It was a sorry mess when it came to me,” Dave says. “It had been sandblasted and left outside. One door was half an inch longer than the other, everything was wonky, it had lots of lumps and bumps, it needed new sills and some of the ground-down welds were cracking.”

In addition to redoing much of the bodywork, Dave also addressed the substandard chassis mods. The Velox’s monocoque structure had been hacked into to accommodate a narrowed Mitsubishi L300 front-end, so the weakened chassis was reinforced with new crossmembers. Side-impact intrusion bars were also added, making Nigel’s Vauxhall stronger, stiffer and safer than ever. 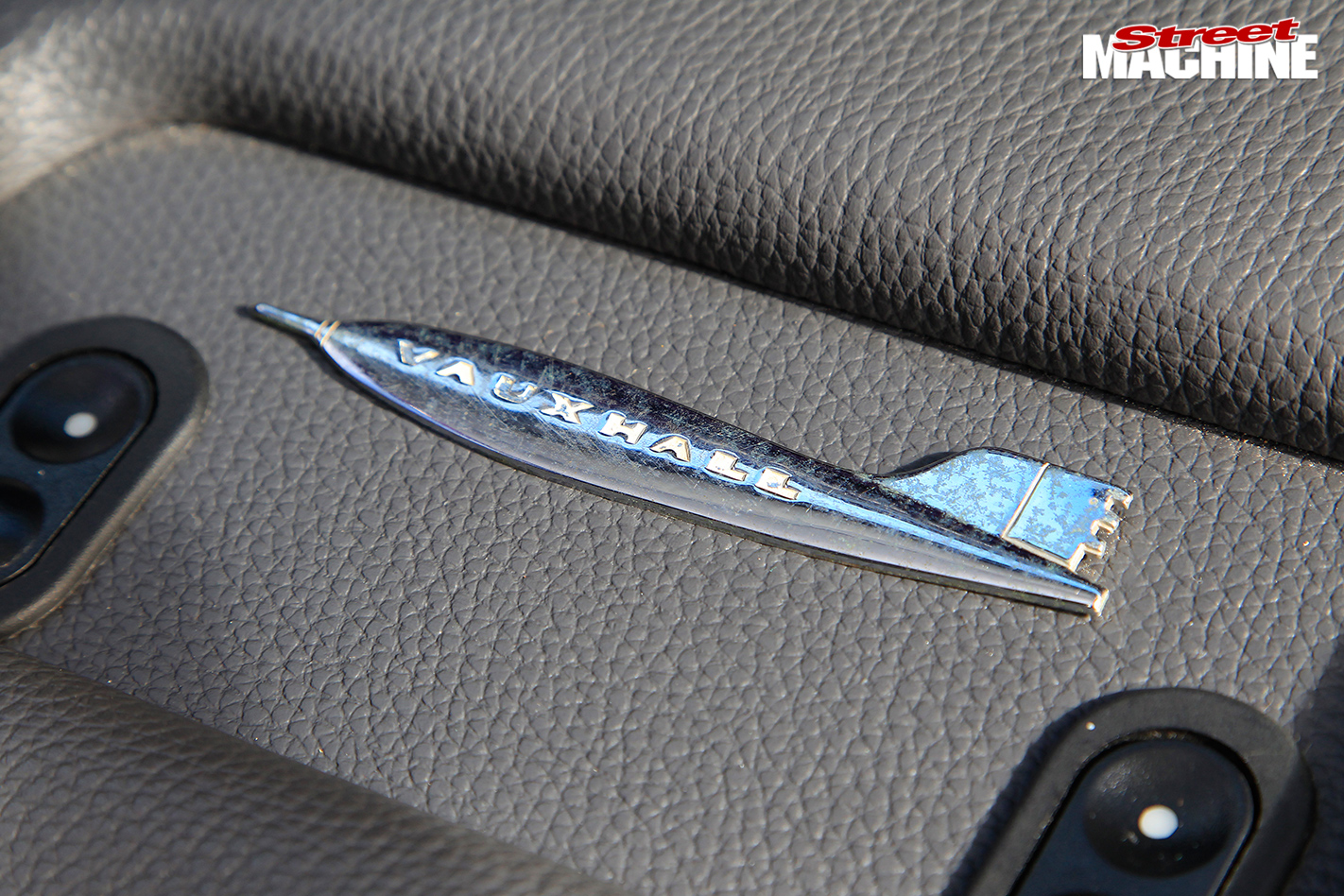 The Velox was a long time in the build, which included venturing to countless swap meets looking for just the right part - at just the right price. This Vauxhall rocket is one such piece

A BorgWarner diff from a 265ci Hemi-powered Chrysler Centura was sourced, due to its strength and narrow dimensions, and was slotted under the Vauxhall’s posterior using the factory leaf springs – which were reset to sit the Pommy cruiser low over its whitewalls and 15-inch Customline steelies. 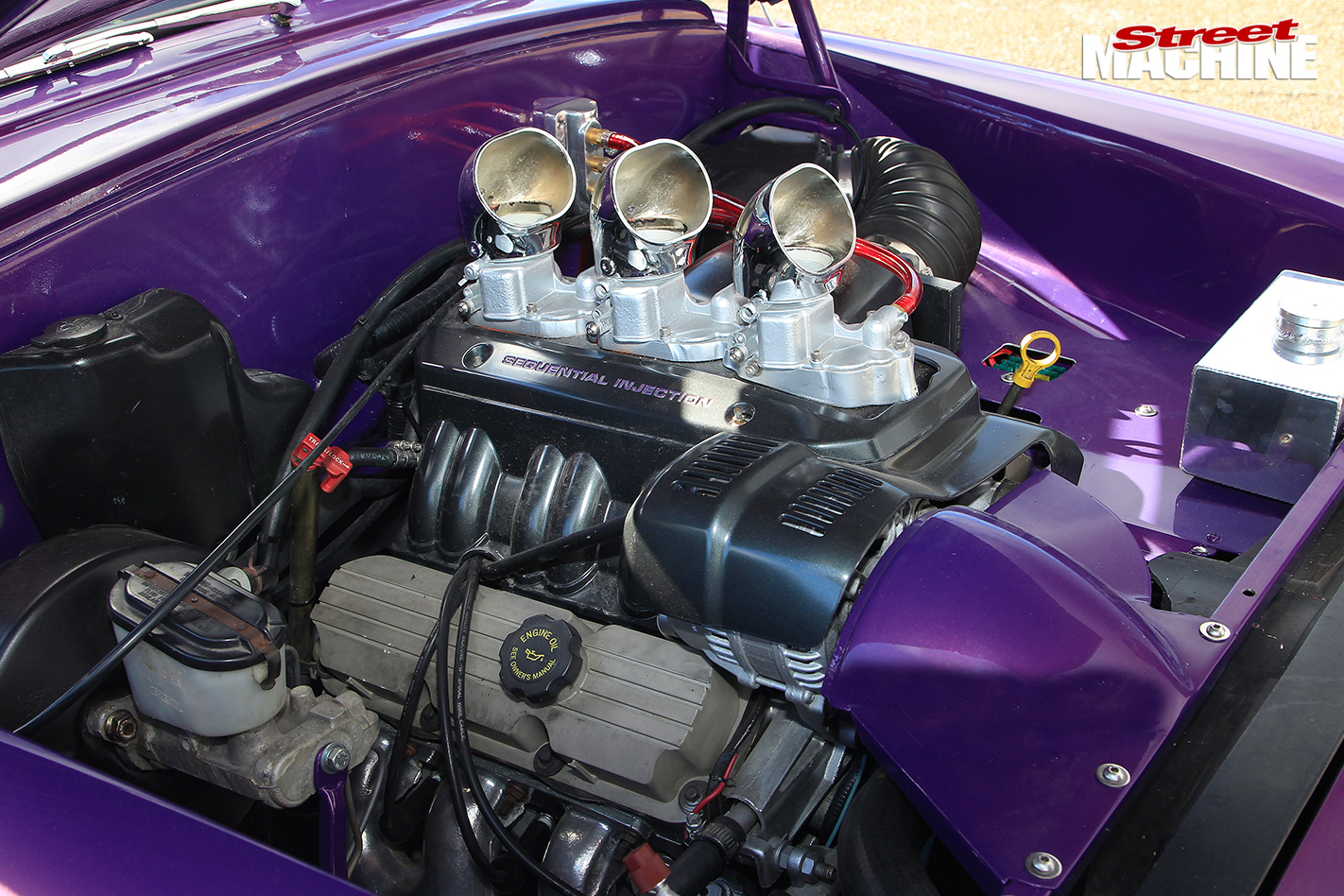 Other than the power steering delete, the VT Commodore Ecotec V6 is stock as a rock

To give the Velox that true American lead sled flavour, Dave took 1951 Buick quarter panel sections and tail-light buckets and grafted them onto the hindquarters. FC Holden guards were used to reshape the front wheel openings. More factory FC sheet metal and hand-formed steel were grafted into place to make the body flow into the narrowed FC front and rear bumpers.

The front windscreen was imported from the UK, while the rear was reproduced by Ralph Moore and laid forward. Ralph had to cut down the front ’screen to get it to fit, and also made the custom side glass, minus quarter windows. 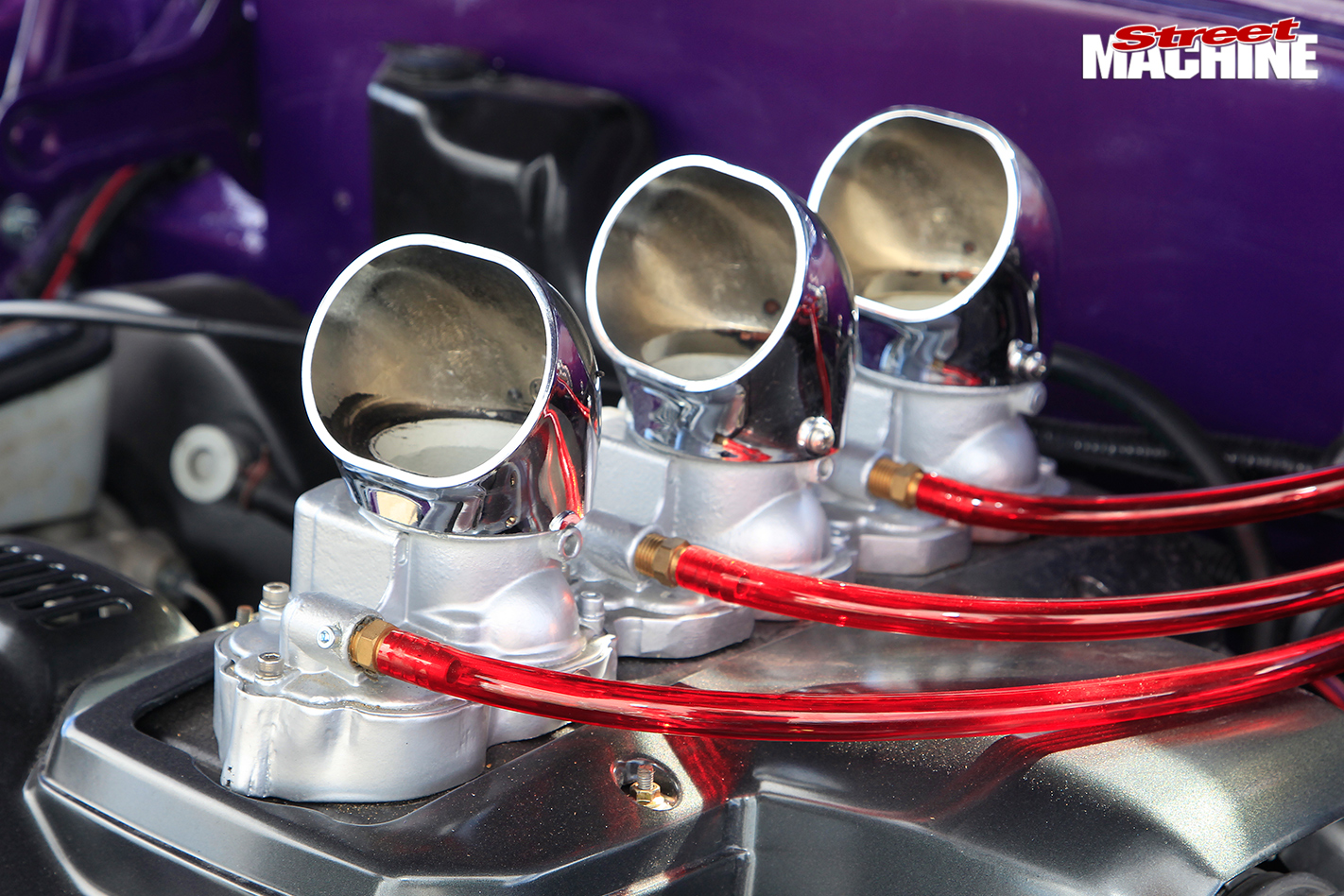 Nigel was only 17 and still on his red Ps when the project kicked off, necessitating a P-plate friendly build – V8 power was a definite no-no. With this in mind, a low-kay VT Commodore was purchased for its Ecotec V6 and matching 4L60E tranny. Making as much use of the donor car as possible, the Commodore’s floor and tunnel section, shifter, handbrake, pedal box, footrest and booster set-up all found a new home in the Velox. 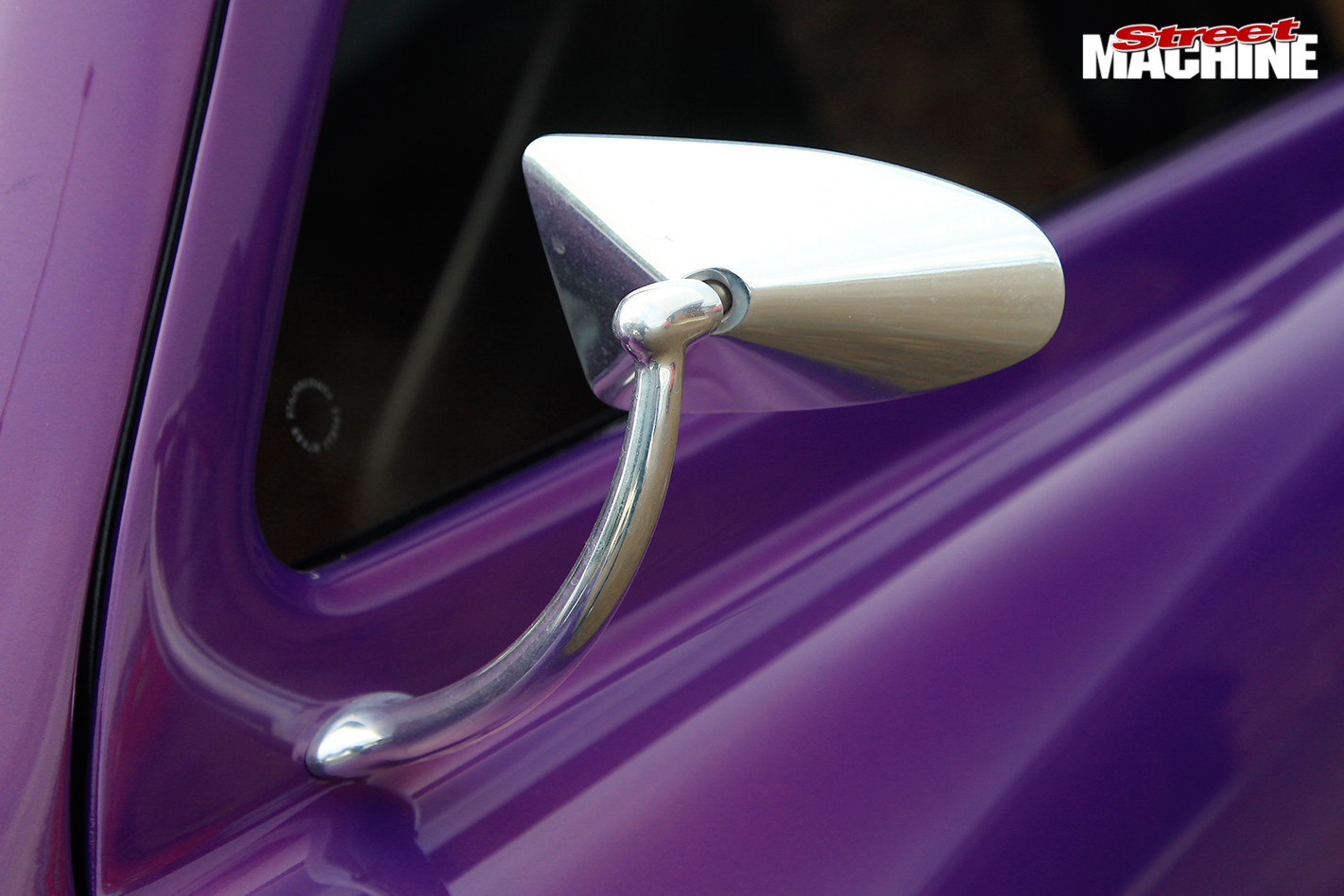 With the car starting to come together, it became obvious that the engine bay looked a little plain. “The big plastic cover goes over everything,” Nigel says. “I wanted to pretty it up.” The addition of three genuine Stromberg 97 tops certainly solved that problem.

With so much Commodore DNA, Nigel opted for a factory Commodore colour, Morpheus Purple, which was laid down by Polish Paul. 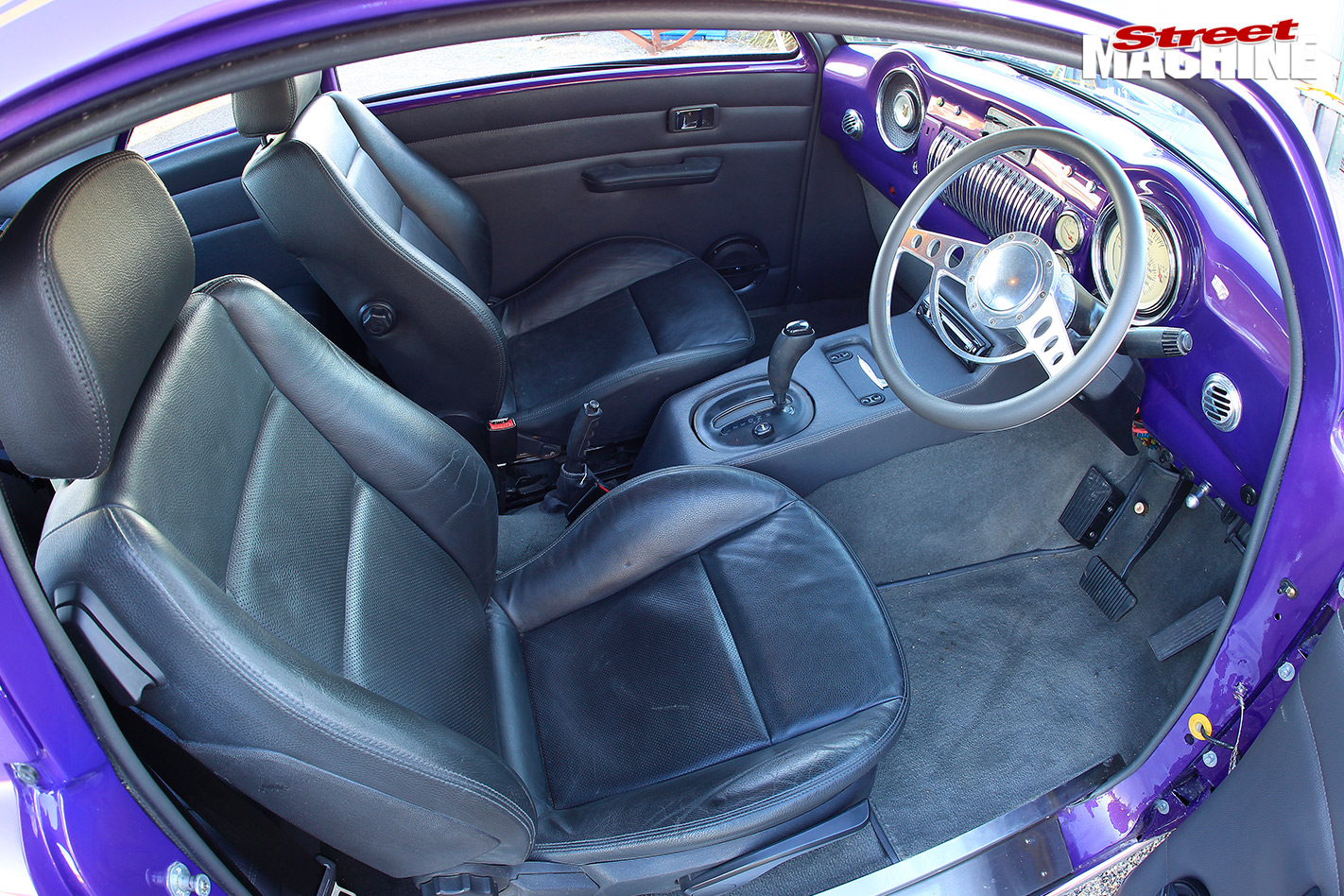 “Lacework was popular in 60s and 70s hot rod magazines, but I hadn’t seen it in Australia for a while, so I thought we’d give it a crack,” Nigel says of the Velox’s awesome gold-bedecked roof. “I tell you what, when you’re dressed as a typical hot rodder, you get a lot of odd looks when buying lace curtains!” 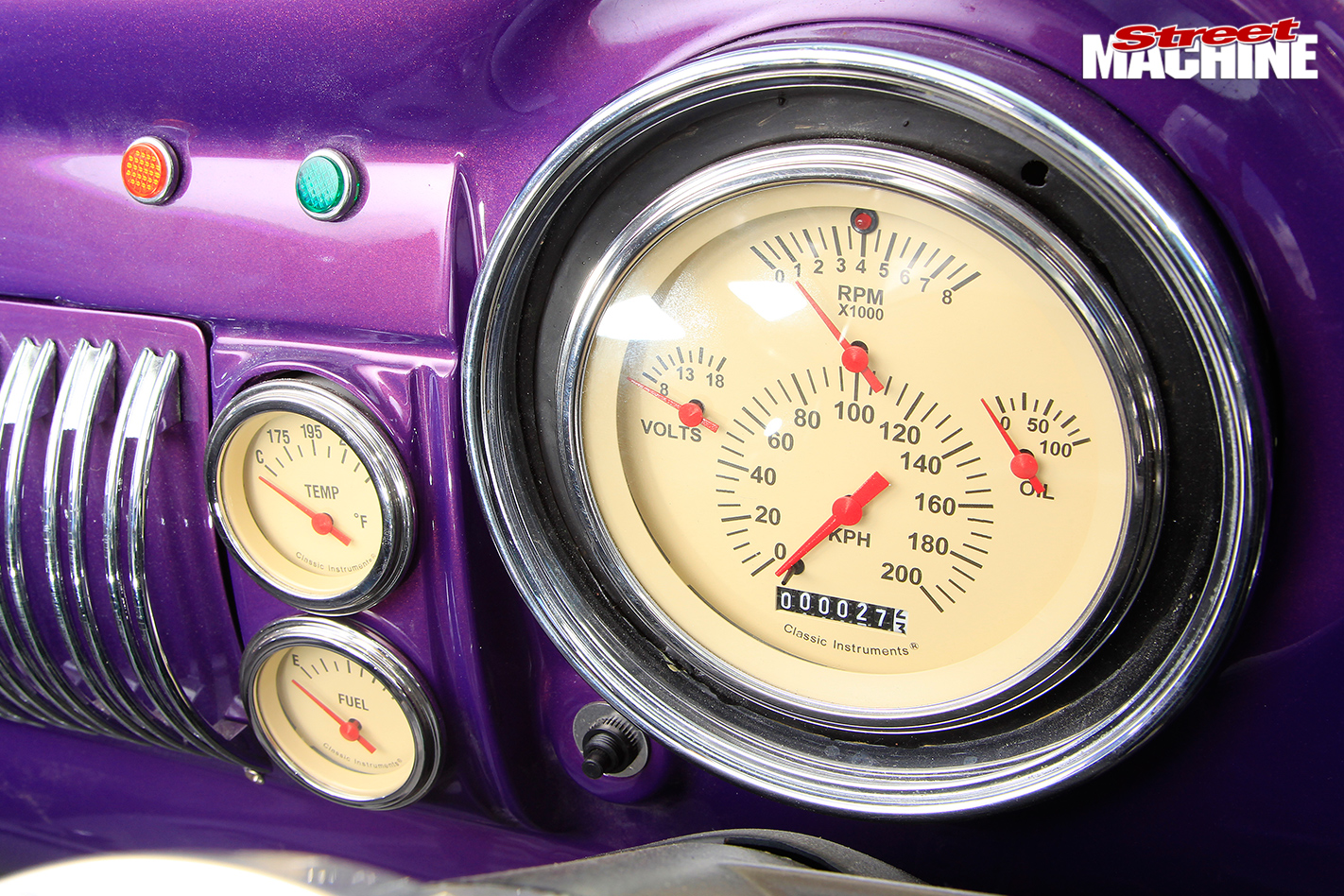 For his part, Dave admits that he hadn’t done lacework for 30 years. “I had to remember how to do it again!” he laughs. 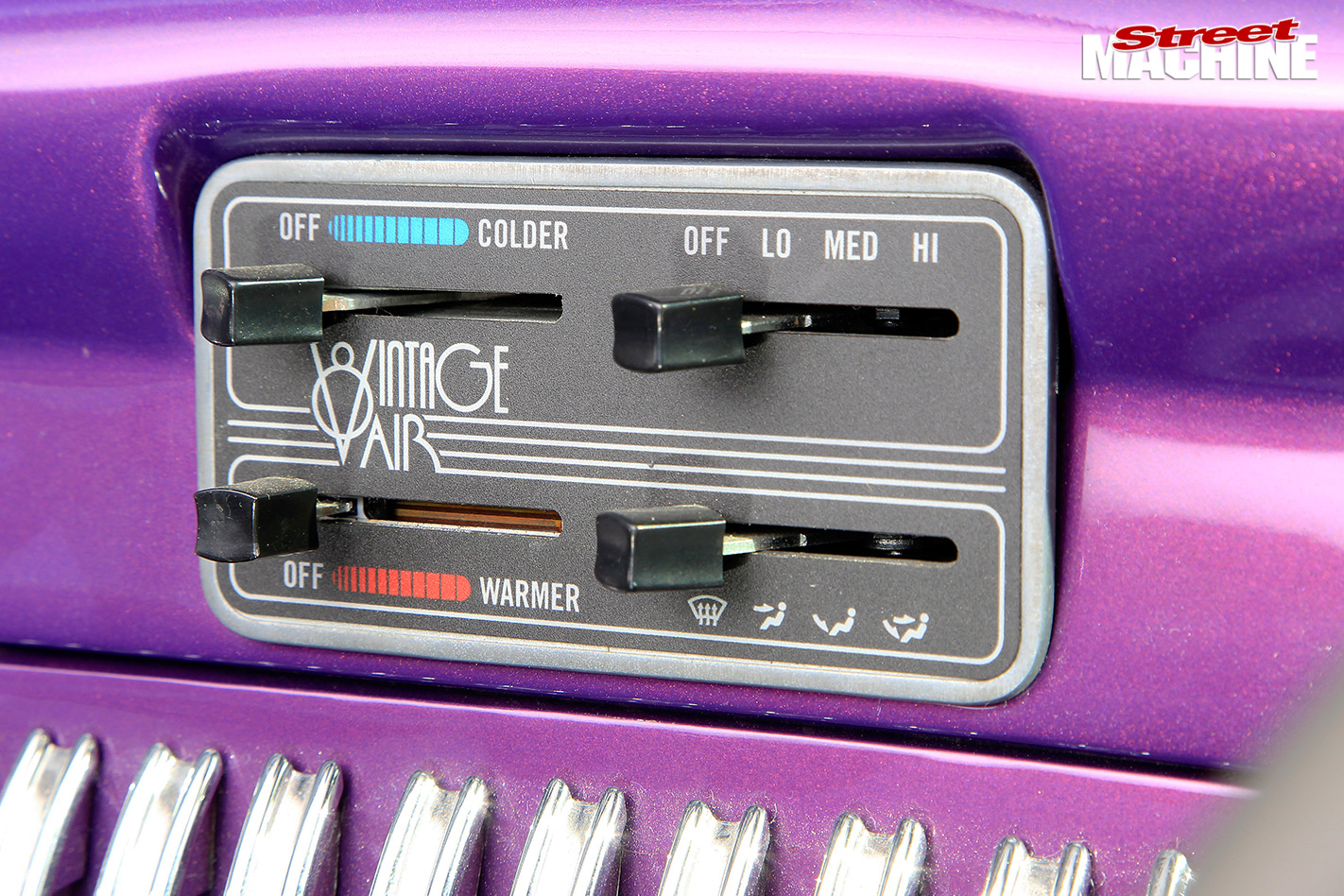 Although not registered yet, the baby lead sled will be fully engineered and street-legal – Nigel and Dave have been working with engineer Emmanuel Cambourakis from the outset. So look for out this purple Pommy custom cruiser out ’n’ about around the NSW Southern Tablelands in the not-too-distant future. My bet is that many folks will be scratching their heads trying to figure out what the hell it is! 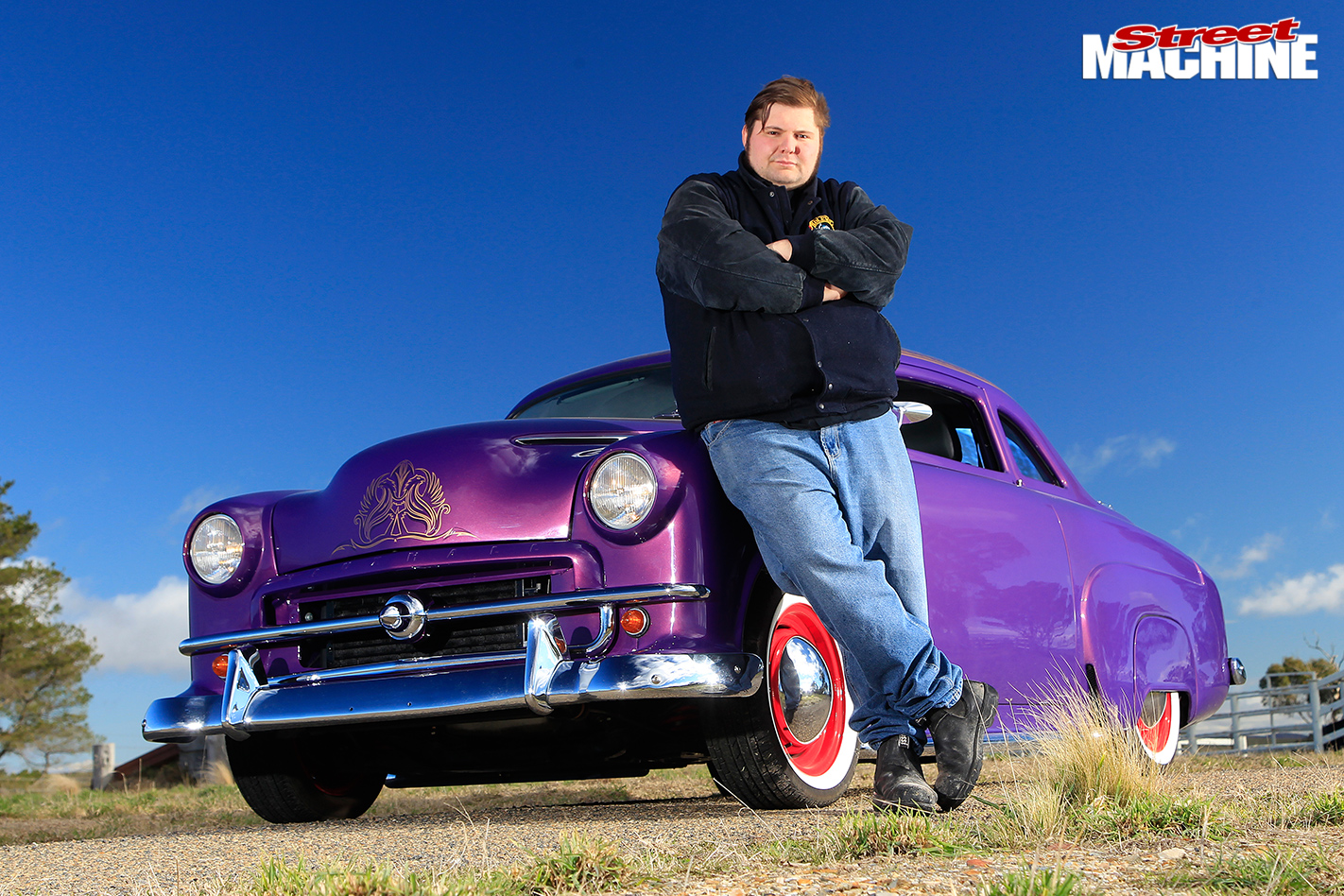 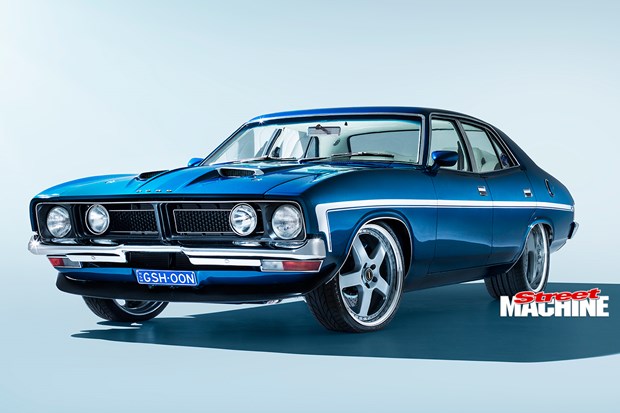 After a collision with a concrete block, Michael Stivala's Ford XB GS Fairmont GSHOON is back and better than ever 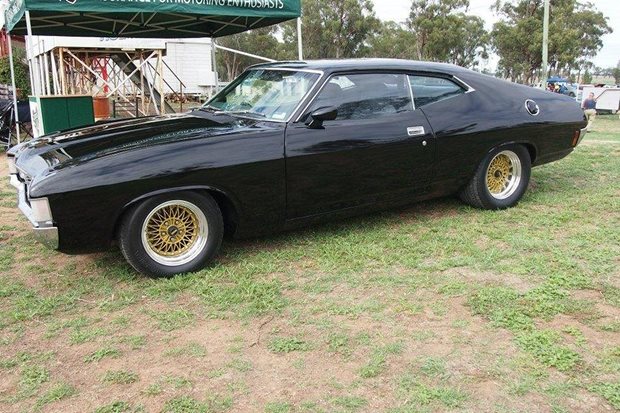