ALL Jeremy Burnett wanted for the build of his ’55 F100 were three simple things: “Big wheels, big horsepower and a tough stance.” If we were talking cricket, Jeremy’s bagged the hat-trick.

It was a pretty simple brief, with equally simple beginnings. “The cab and doors came from a farm in central Victoria and the tub came separately, then it was a case of sourcing all of the parts and building a chassis to suit,” Jeremy says. 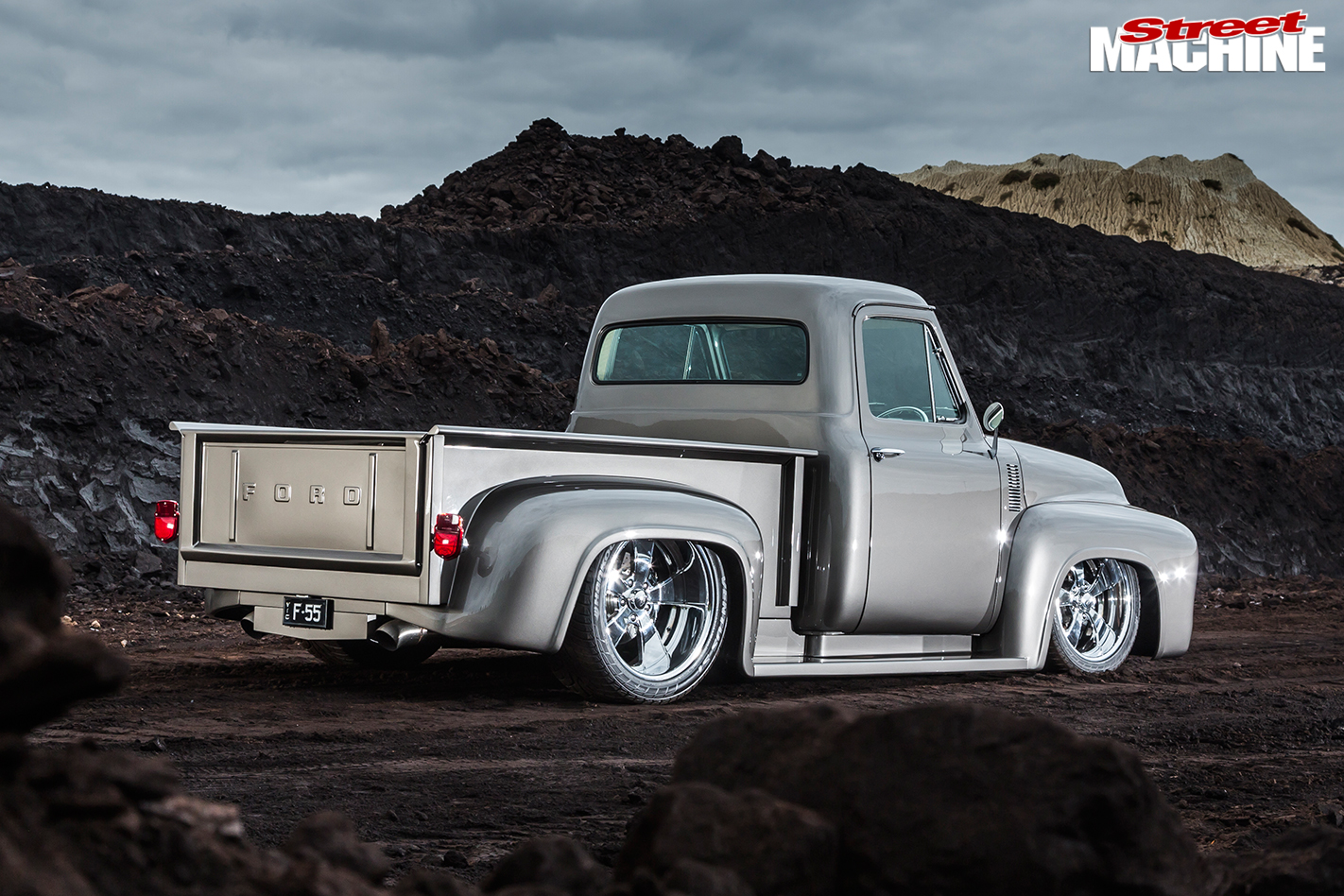 To get the bones of the truck sorted, Jeremy turned to a mate of his, Corey, who had just started CJ’s Rod & Race Fabrications. “We designed it from scratch, starting with the wheels, because there was a lot of work to be done to accommodate the 20-inch front wheels while still having a full turning circle,” Jeremy says. “He put the chassis together for it and did a lot of the panelwork with the widening of the tub and smoothing out the side steps.” To get some more width in the tub to accommodate the even larger 22x12 wheels out back, Corey unpicked the spot welds in the original tailgate to get a few extra inches and then joined them to the original tray sides, before fabricating a new front section. 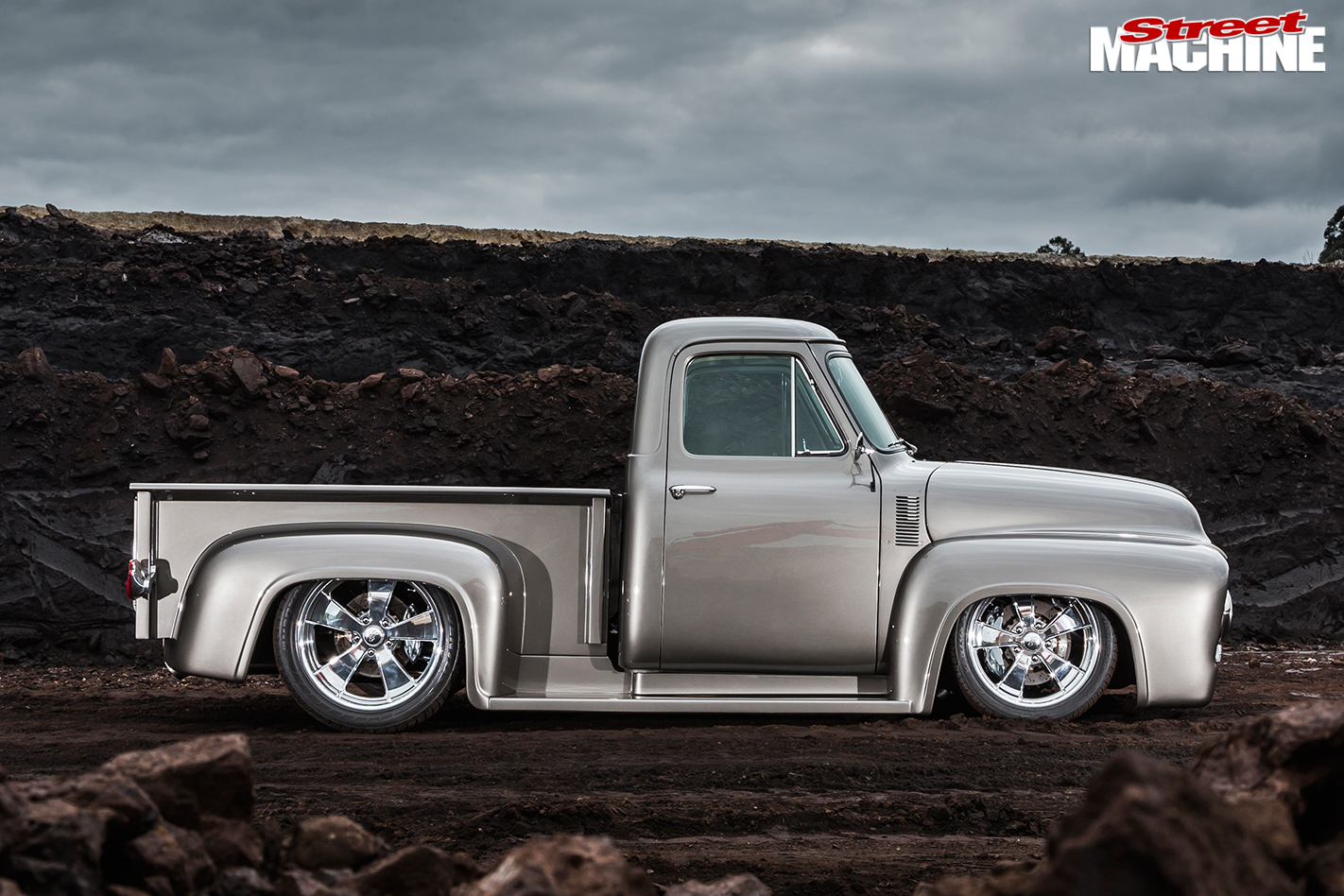 The front of the body also copped a fair bit of smoothing out: “The inner fenders and guards are welded together so there are no bolt holes along the top,” Jeremy explains. “The original hinges are notorious for being a pain in the arse, so I made the bonnet flip forward. Trying to get a 1950s commercial vehicle to have show-quality gaps is tough; every time the bonnet would shut it would come down in a different spot. We also filled the front rollpan where the two bumper irons used to come through. The grille is original, but squared up, welded together and smoothed out.” 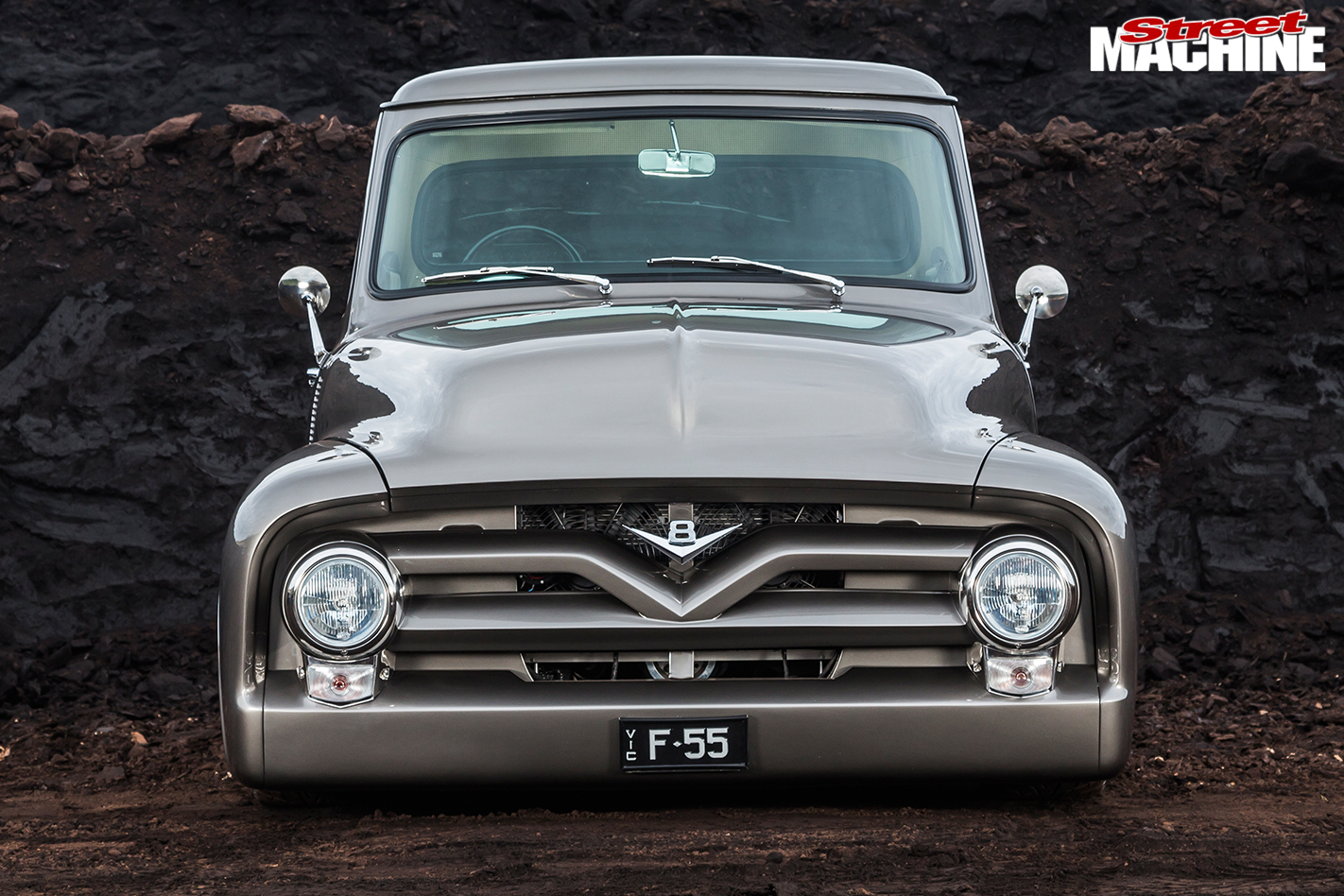 The grille is original but has been welded together and smoothed for a much cleaner look. There's also no front or rear bumpers

While the mid-50s F100s aren’t that thick on the roads here in Oz, they are massively popular in the US, and that can only mean one thing: There’s a massive aftermarket parts inventory for them. “They’re similar to building a ’57 Chev – you can just about buy everything for these things brand new,” Jeremy reckons. “There’s a mob in the States called midfifty.com that have a lot of parts.” 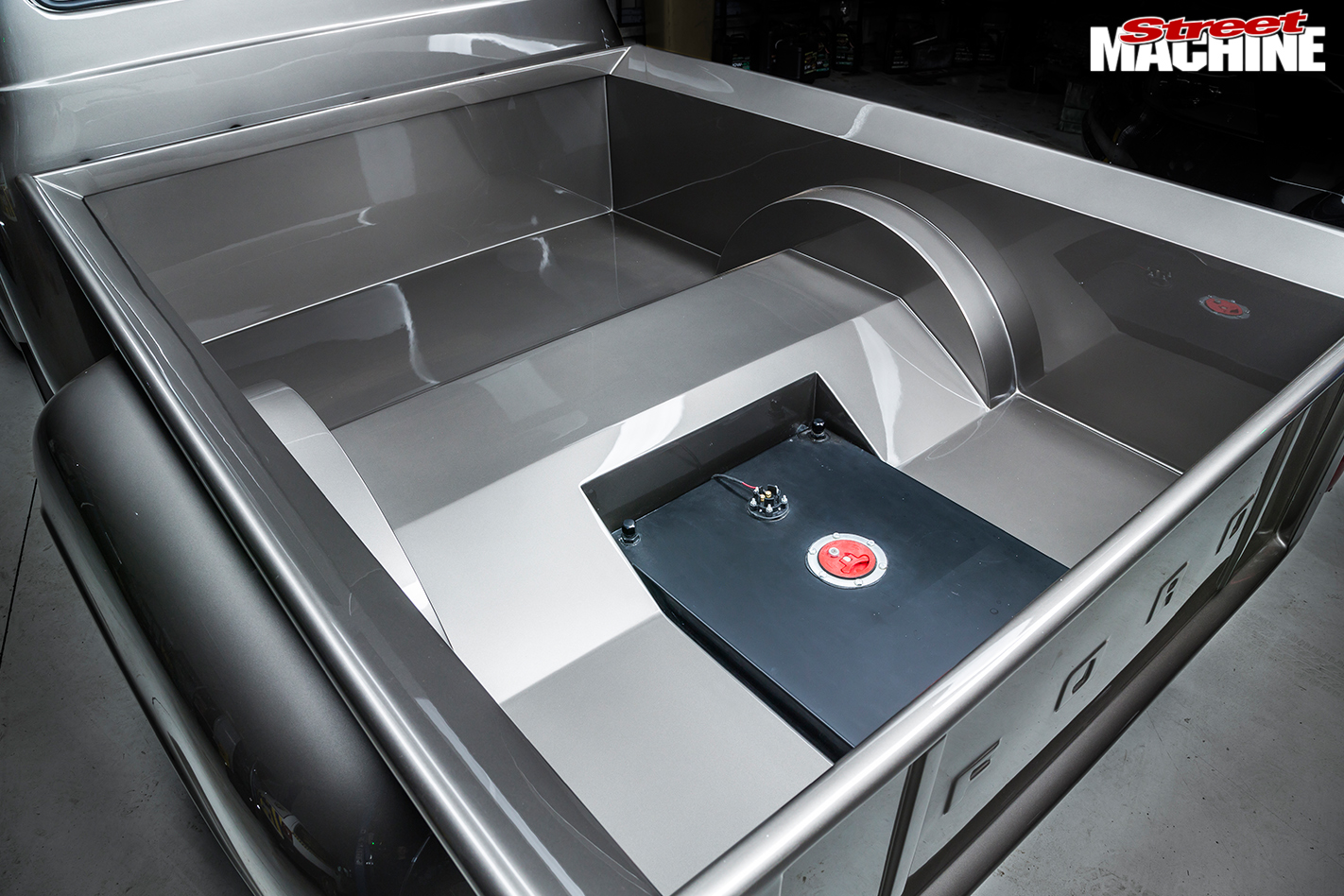 The rear guards have been welded to the tray to remove the mounting bolts, and a new floor and tubs - to clear the wheels and kicked-up chassis - were fabricated

Speaking of Chevs, there is a little bit of ‘Built Ford-Tough With Chevy Stuff’ going on, but instead of being in the engine bay, it’s the transmission: “Charlie Gauci told me he’d be able to build a Turbo 400 that he’d put a lifetime warranty on for 1000hp, so it was sort of a no-brainer,” Jeremy says. But don’t worry all my Blue-blooded friends, it’s all Ford under the bonnet – and plenty of it! 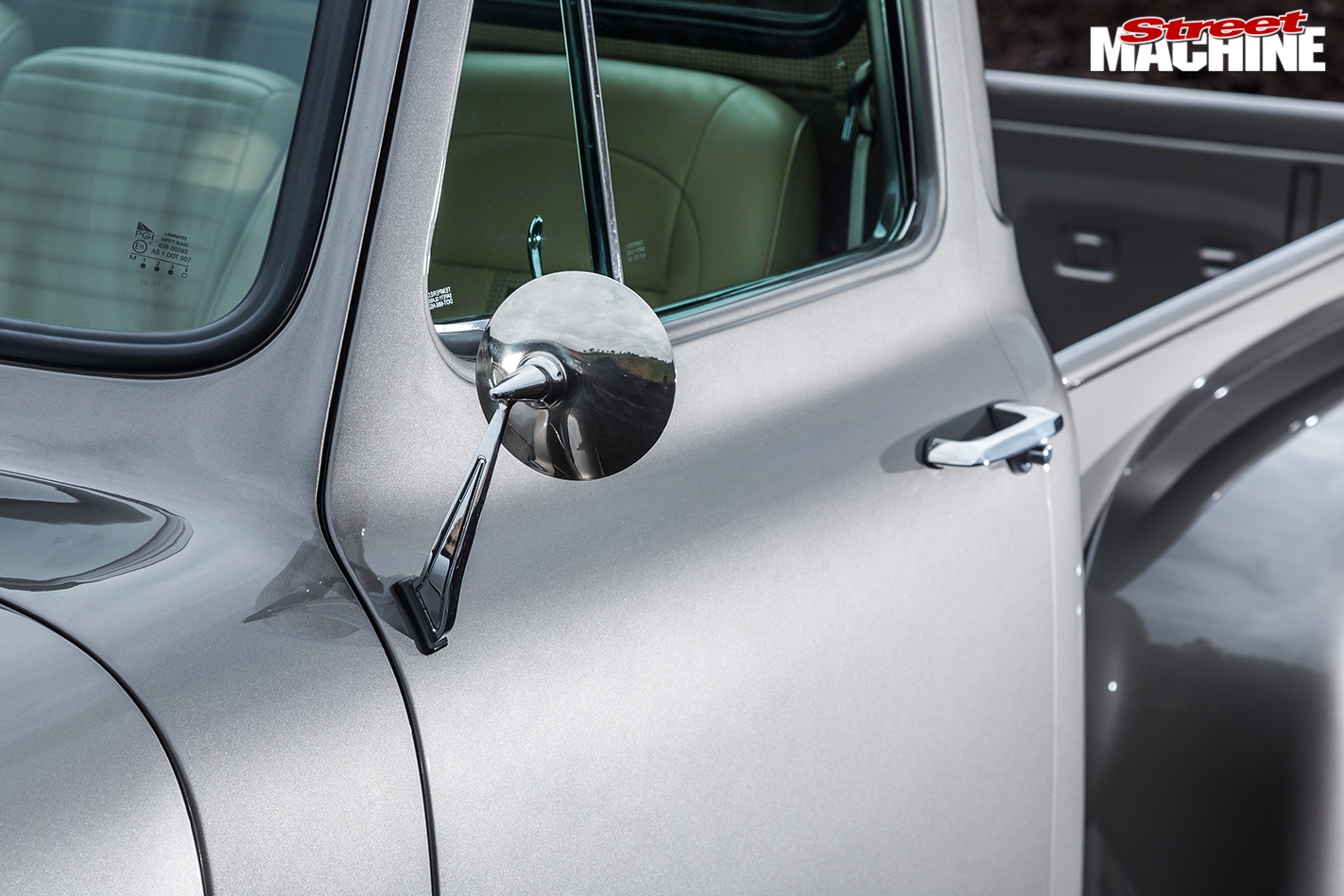 The mirrors are similar to the stock ones, but have a billet stand

“We bought a complete set of heads, intake and carby as a package from Kaase Racing Engines and put it on a 460 block out of a wrecker’s in Geelong,” Jeremy explains. “Then Nino at Riverside Motors put it together. Only pushed it to 6500 on the dyno and got 813hp out of it, so it just fries tyres!” 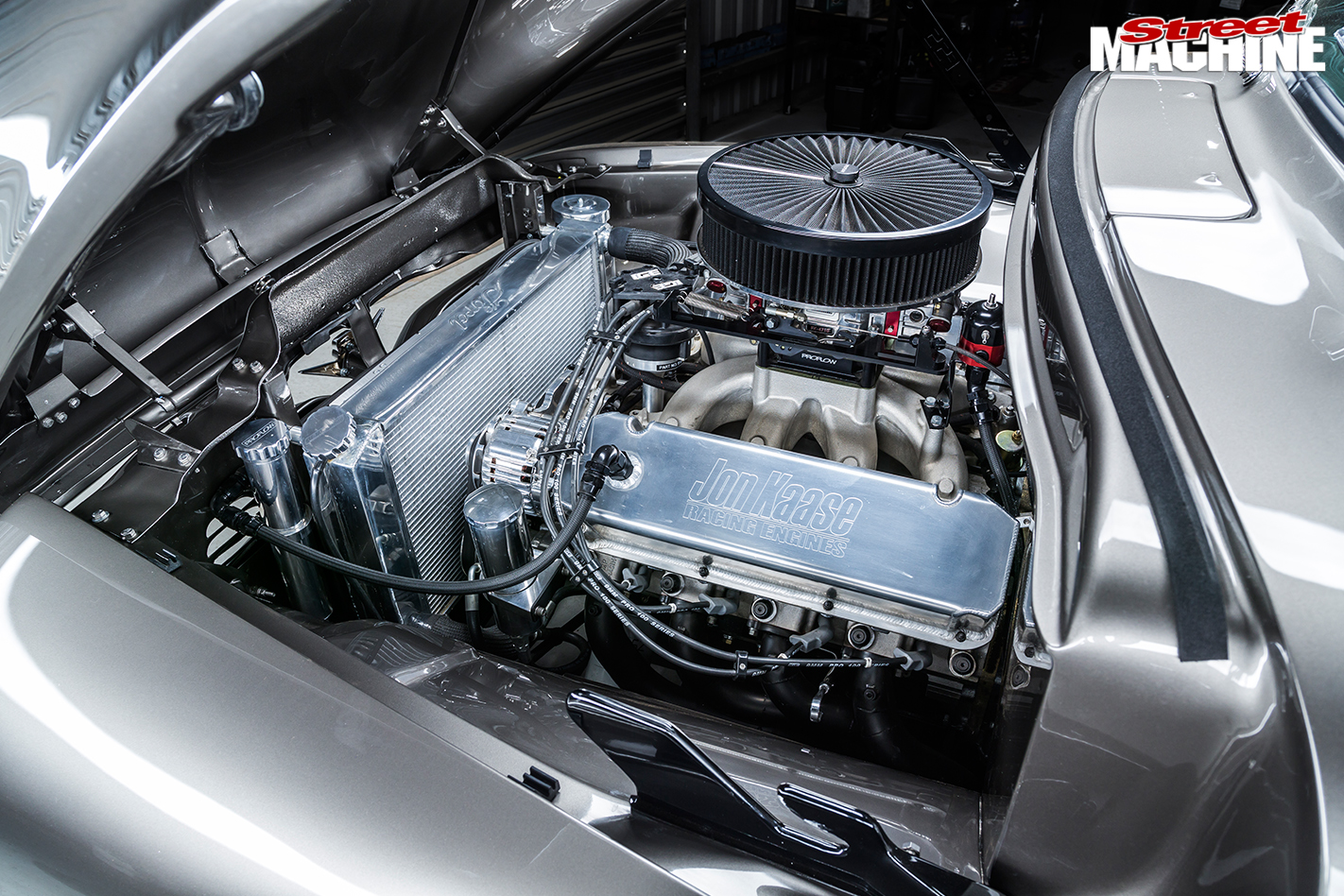 Riverside Motors put the 545ci stroker together using a top-end package from Kaase Racing Engines, featuring a set of their P-51 heads. It's a pretty cranky combo with 12.5:1 compression, but pushes out over 800hp at the crank

You don’t normally get that much power out of a simple 460, so it’s no surprise that there’s a bit going on internally. There’s a Scat stroker crank, Scat rods and a set of 12.5:1 pistons that push the capacity out to 545 cubic inches! Pretty easy to see what the cause of those traction problems is! 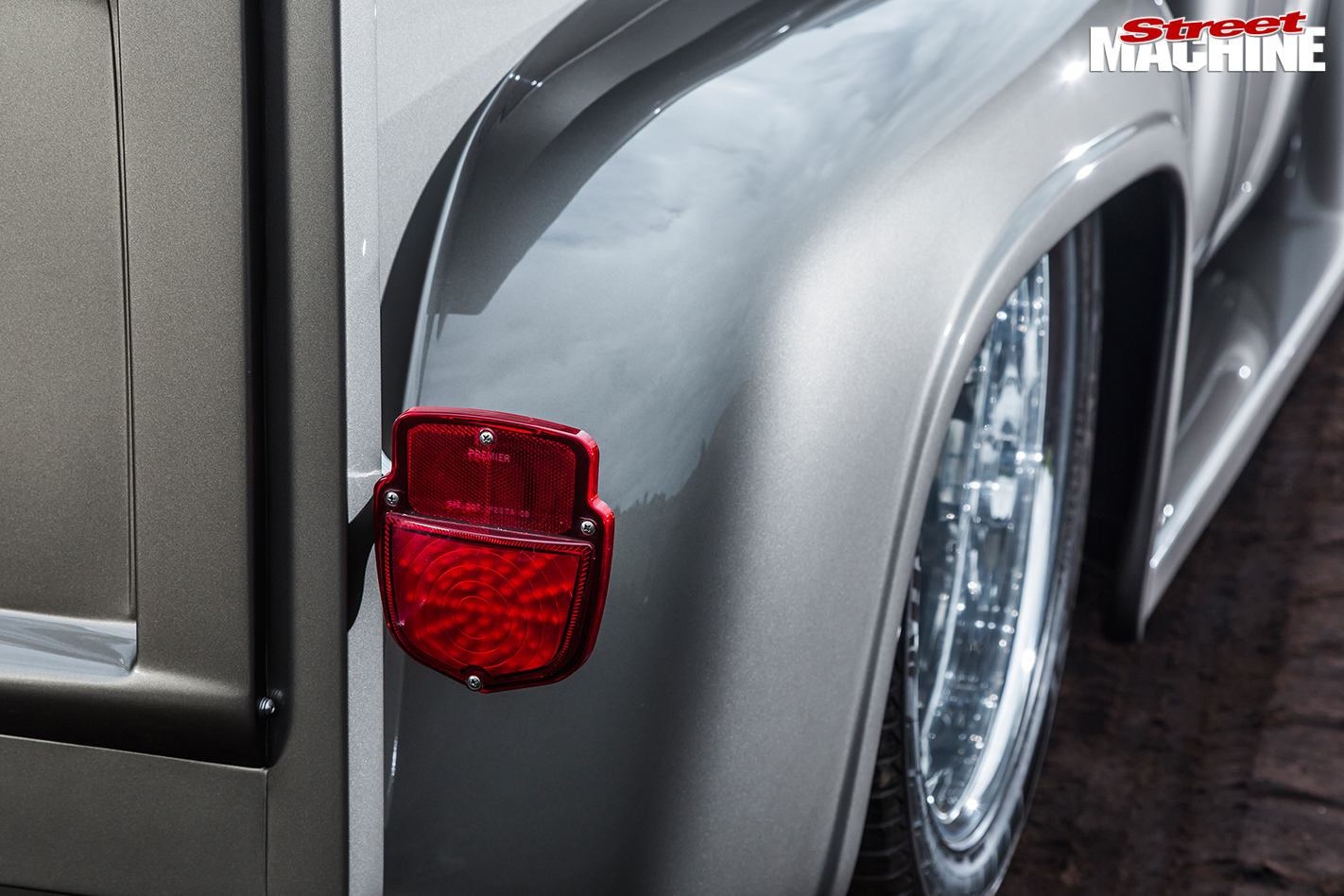 While it’s a bit difficult to sneak up on anyone with 800+hp trying to escape out of twin three-inch pipes, if the engine was switched off you’d have no idea what’s lurking beneath. Inasmuch as a big block-powered F-truck with 22-inch wheels can be understated, Jeremy’s managed to do it through his choice of paint and trim colour. “The hardest part was picking the colour,” he admits. “I wanted it to look classy. A lot of people have done really in-your-face colours, but I wanted it to – not be a sleeper; you can definitely hear it and see it coming – but have a bit of class to it.” If you’re wondering, the colour is called Palomino, and while it may look grey in certain light, there’s a quite a bit of gold in the paint as well, which gives it more of a bronze tone. 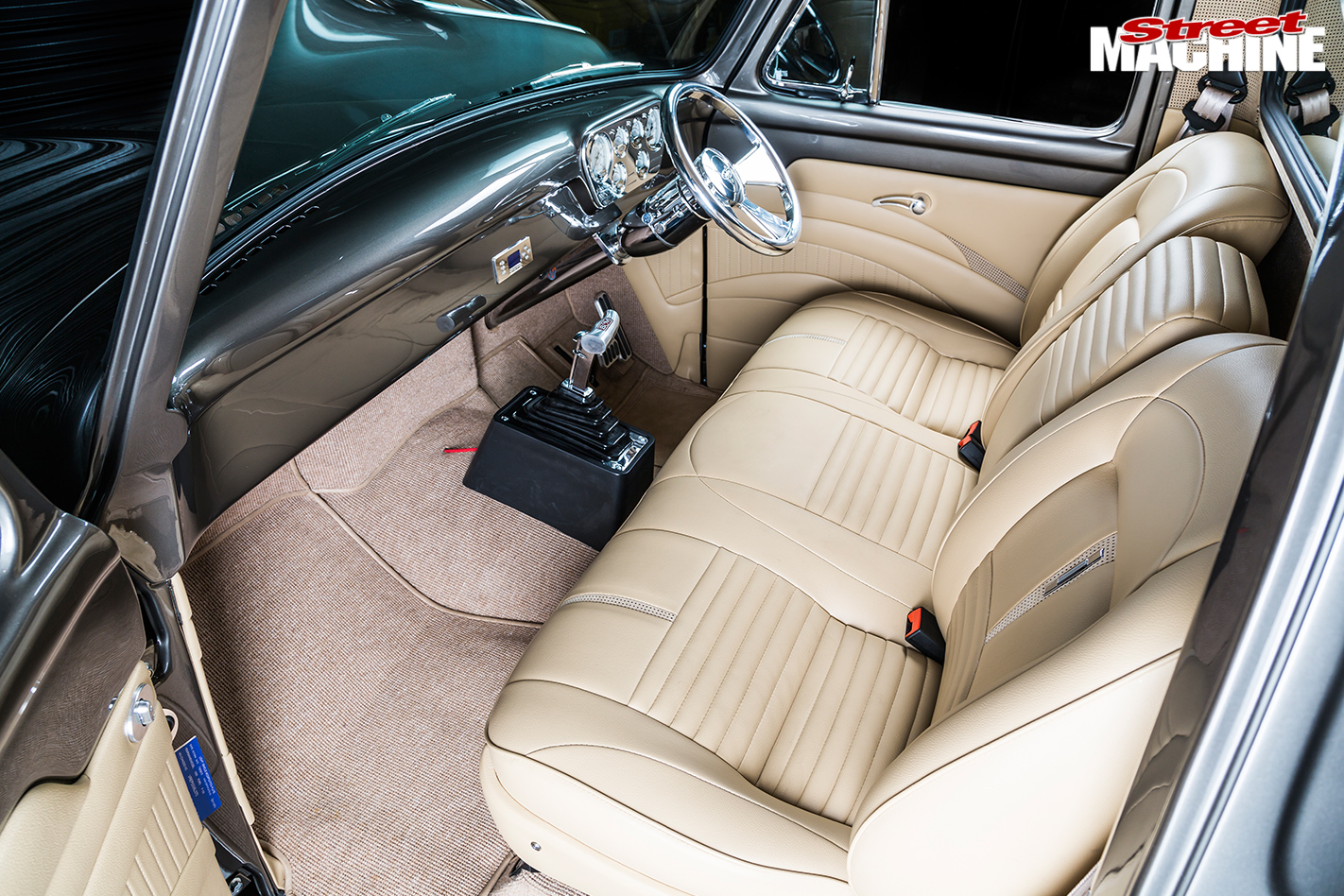 The interior is all class, with cream trim, a perforated hoodlining and German square-weave carpet, and is the work of Adrian at Kooltrim. “I picked the colours and gave him free rein on everything else,” Jeremy says. “I just wanted it nice and neat. The badges in the seats he had lying around for 25 years and didn’t know where he was going to use them, so they were his idea. It only took him 10 days to do the job; it’s a 12-month wait to get in, but once your window’s up that’s all he focuses on. Ten days for something of that quality is amazing.” 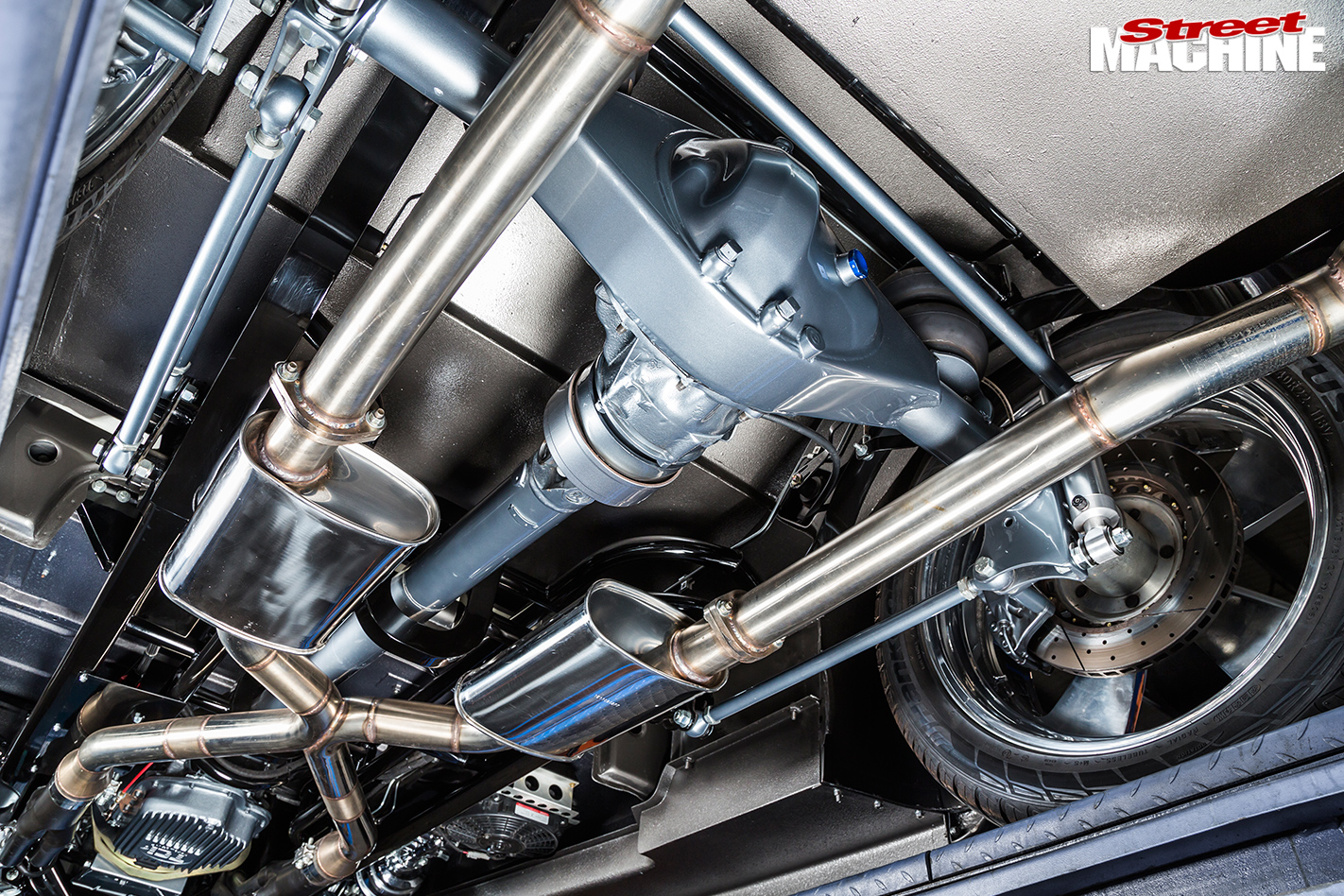 Underneath is just as nice, but there’s nothing over the top. Jeremy does drive it – and now that he’s done with the show circuit, it will see a lot more miles – so it has to be easy to maintain and be serviceable; he didn’t want to be pulling half the truck apart to fix something. Underneath the body and tub it’s all painted in body colour, while the chassis is gloss black. All of the drivetrain components were done in a contrasting Mercury Silver, and there’s a stainless exhaust and a few other shiny bits as well. 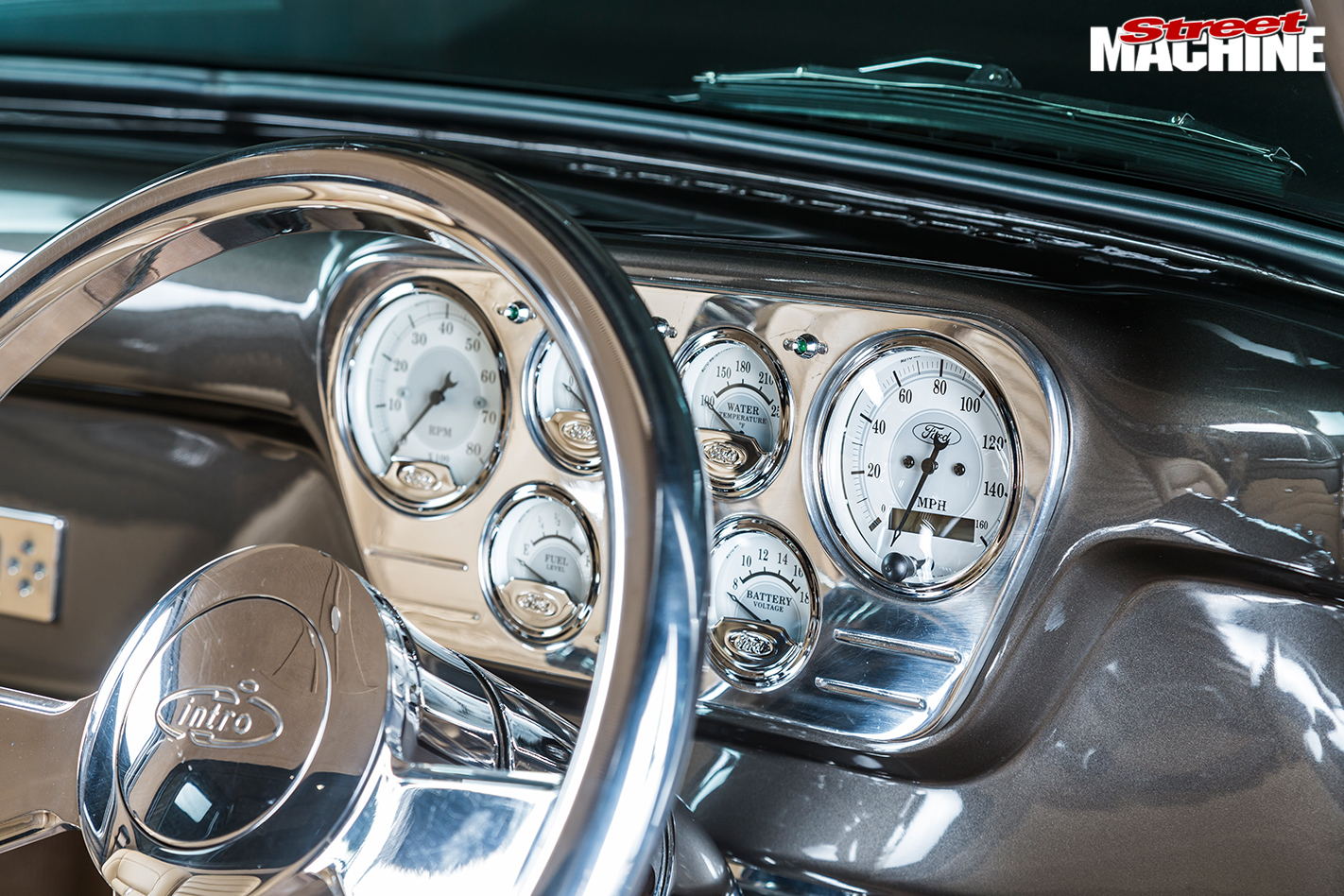 After eight years in the build, it’s great to see such a cool F100 cruising around. While the project evolved over the years as age, experience and – most importantly – funds allowed, it has still come together as a well-thought-out package that will turn heads wherever it goes. 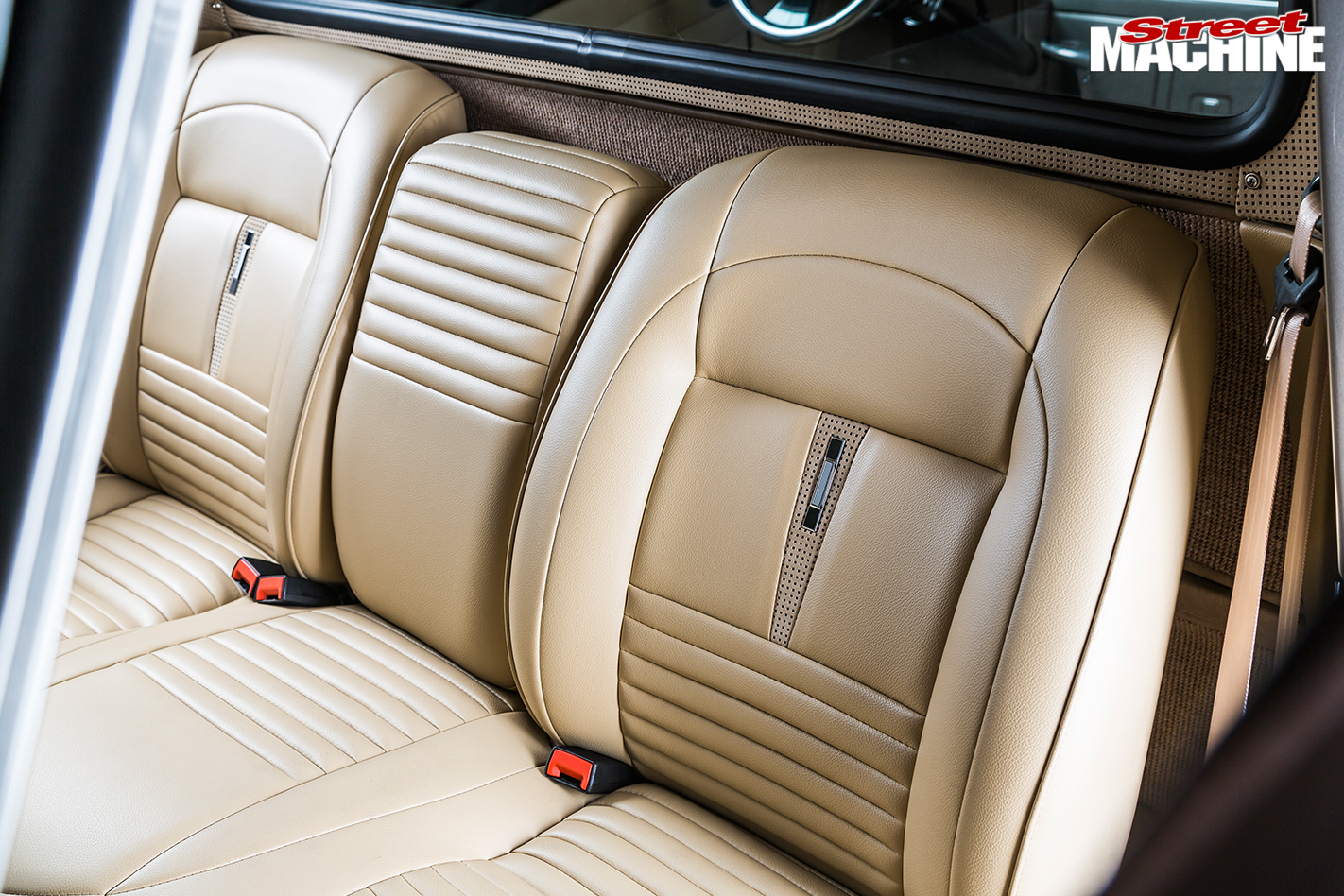 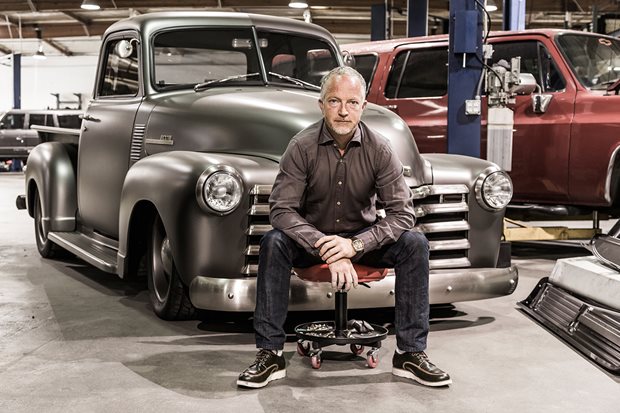 We visit Jonathan Ward at his workshop in Chatsworth, California to see where icons like his Thriftmaster and Derelict series cars and trucks are made