IN THIS scene there are a good number of people who own their cars for far longer than the usual three-year company car lease. Special cars take time to build, might only be driven on special occasions and are drenched in money and love. 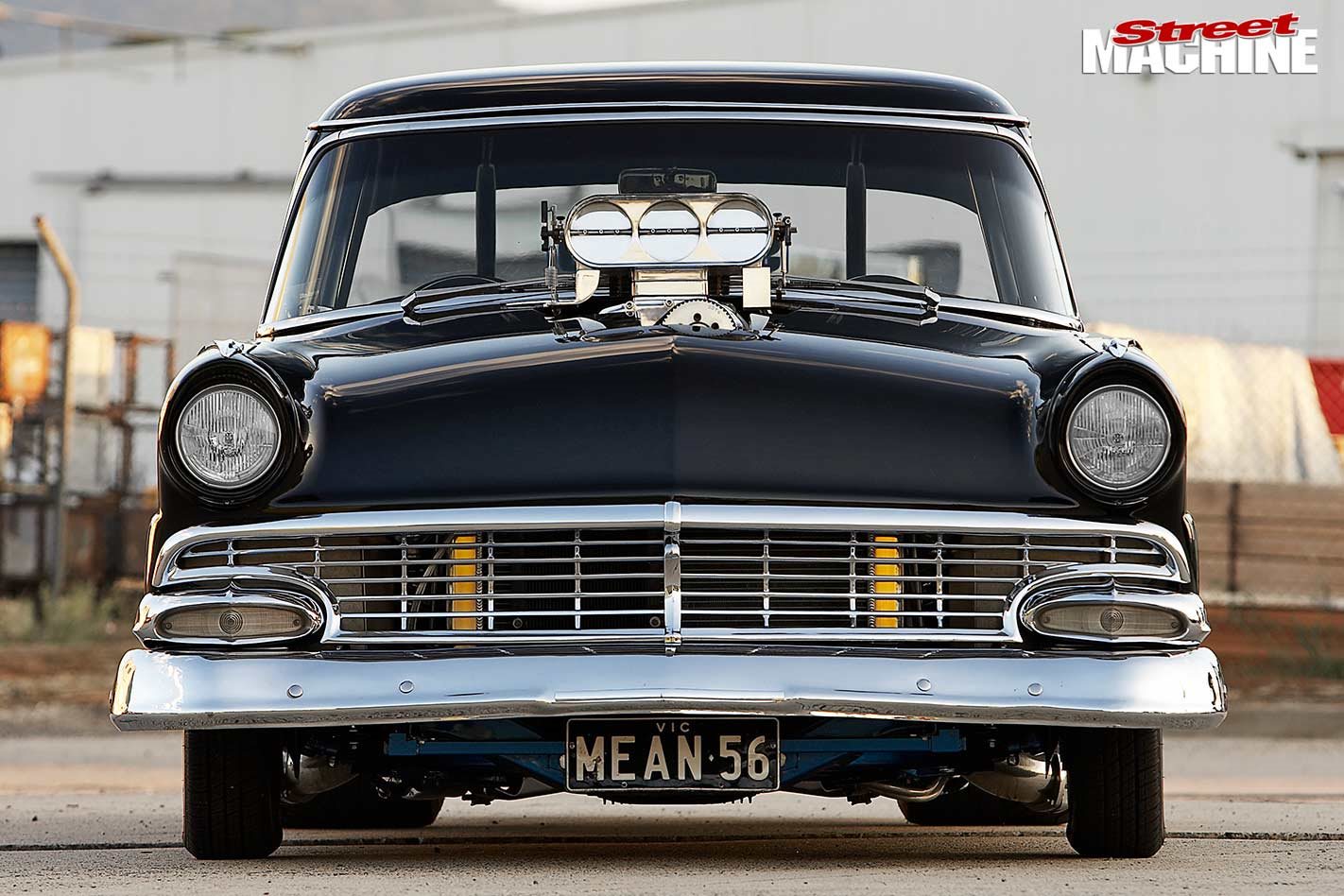 They’re more pets than products, more human than hardware. Part of the family.

“Dad bought it in ’56, brand new,” Peter Denny, the current custodian of this Ford Customline, says. “It’s been around the family for a while! It’s the same age as me and was the family car so I grew up in the back seat. It was stolen when I was about 12, found in the Werribee River and put back on the road. I got it when I was about 16.” 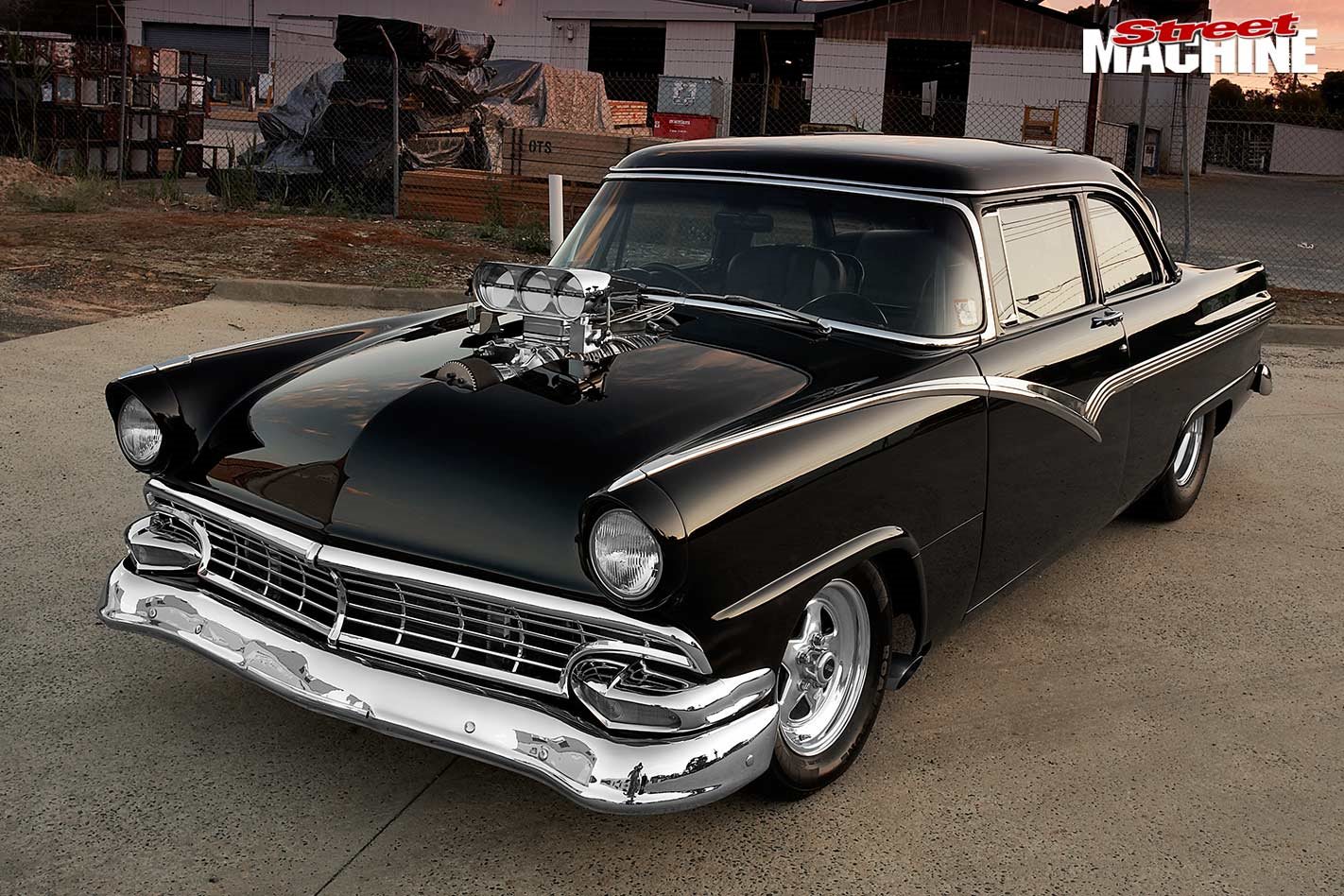 With the enthusiasm of youth — and enjoying an unplanned stint without a licence — Peter threw plenty of effort into the Cusso. These days Peter’s the boss at Stylerod Panels and back then he was already on the tools as a panel man.

It was painted and had triple carbs fitted — good yobbo stuff for the mid-70s — and it stayed on the road for around five years before it was replaced as a driver by another Customline, this time a chop-top.

“I drove that for about five years while I put a 460 big-block into this one, plus a top loader and nine-inch,” Peter explains. 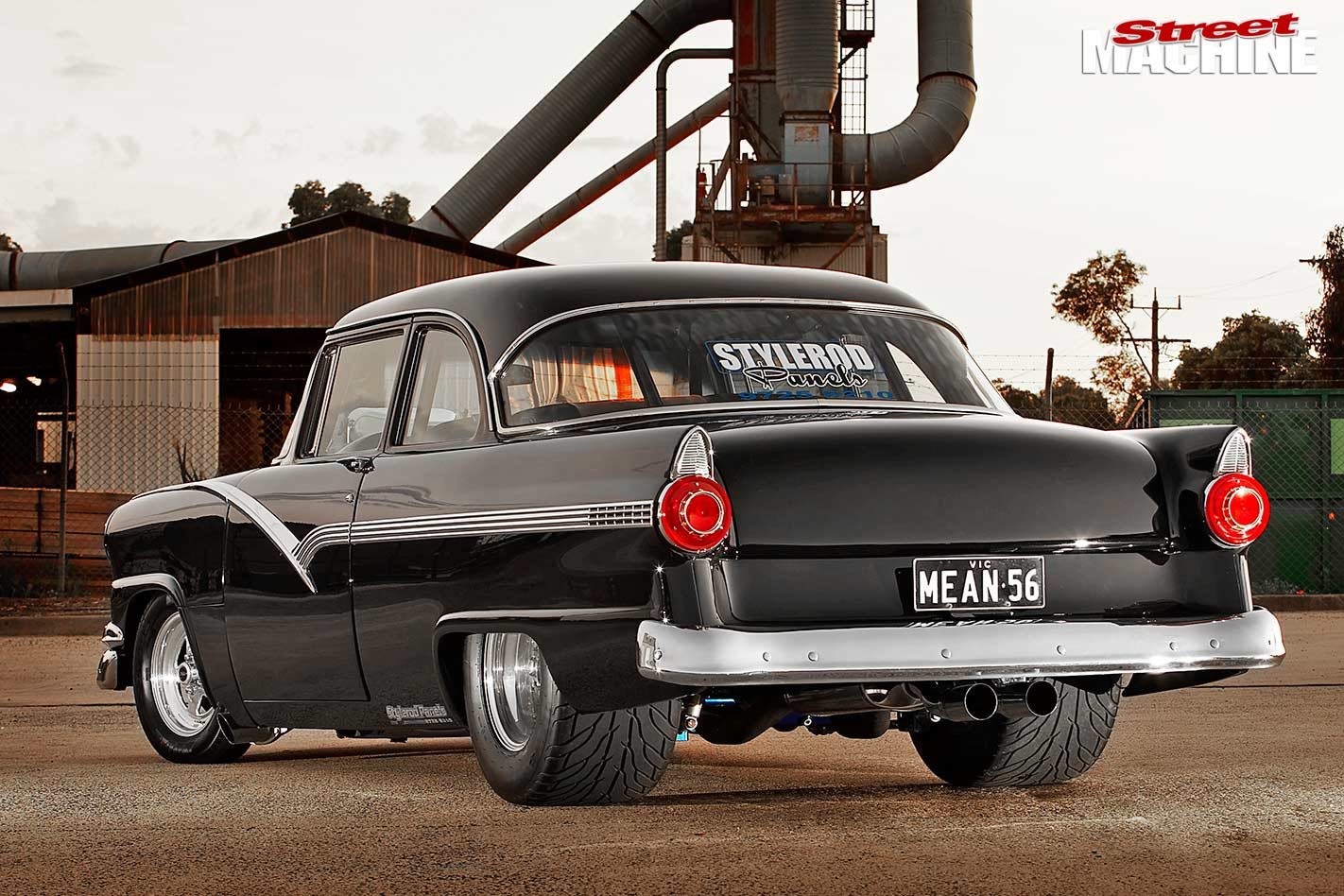 The result was a trophy hauler in the fashion of the 1980s, but the spannering and spraying didn’t stop for long.

“I began driving it and we did another couple of motors for it, some paint here and there. We just did bits and pieces like a tunnel ram. In the 1990s we did a full body-off build and tubbed it, tweaked the chassis so we could squeeze some more rubber under there.”

He explains all this like he’s telling you how to change a set of sparkplugs but in reality he’s summarising nearly four decades of ownership and modification into a few paragraphs.

But all that dilly-dallying around over the years was a solid foundation for the car’s ultimate — because more than likely this is its last — metamorphosis. 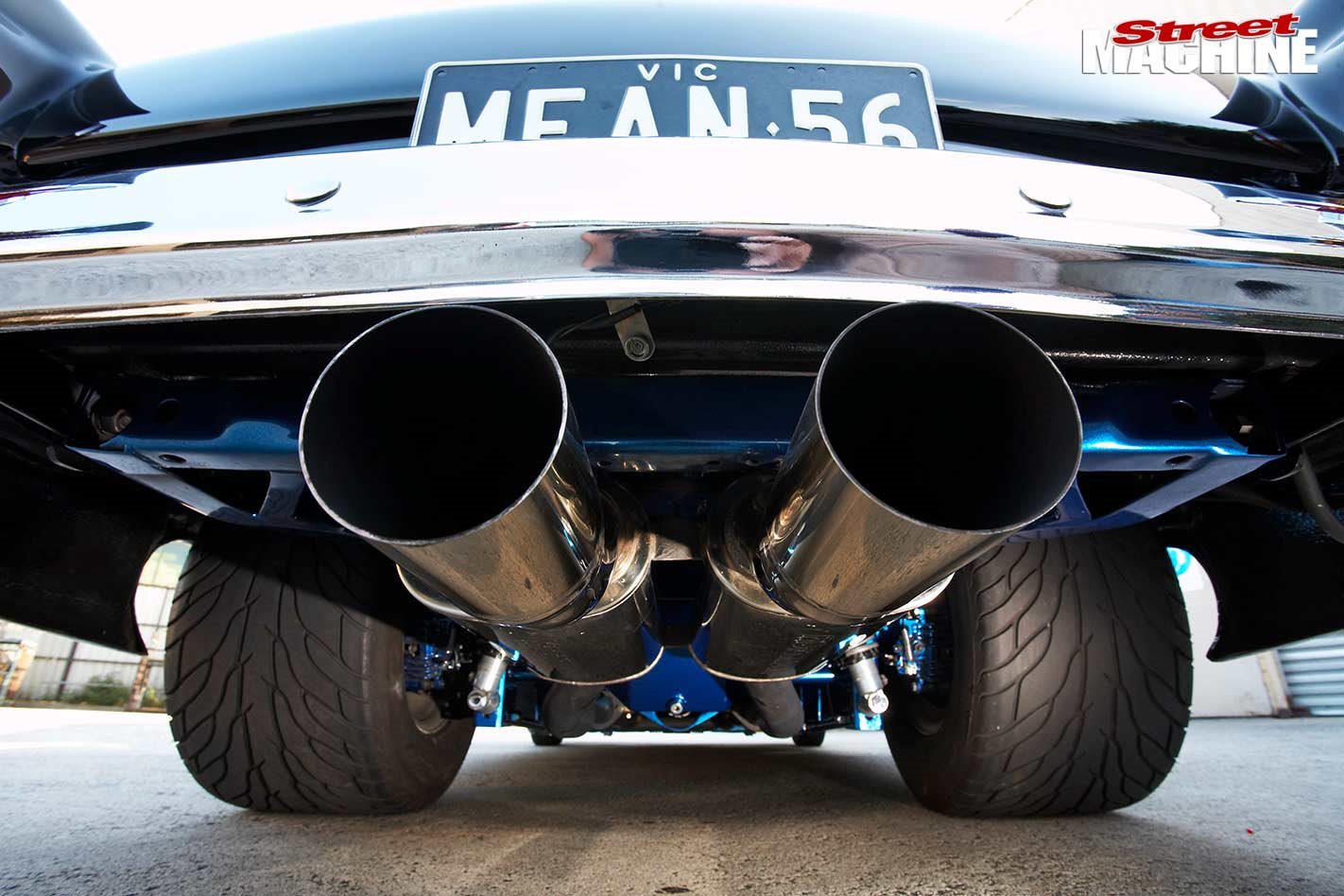 “I must’ve lain on the beach in Queensland and thought too much,” Peter says, spooling up to the story of his car’s latest incarnation, “because seven years ago we drove it home from the Queensland Nationals and pulled off the body again.

It was big alright, a fundamental change from four doors to two, using replacement doors and quarter panels. With the car in the family since new, and having given it four or five builds — he really can’t recall, and what do you call a ‘build’ when you’re tinkering with the car every year or two? — there were no Kinder Surprises anywhere in the Cusso.

He’d already fixed and changed plenty of things too, which helped keep this build to a commendably tight 12 months, give or take. For instance, the fibreglass flip front — fitted more than 20 years ago — was retained for the most recent rejig. 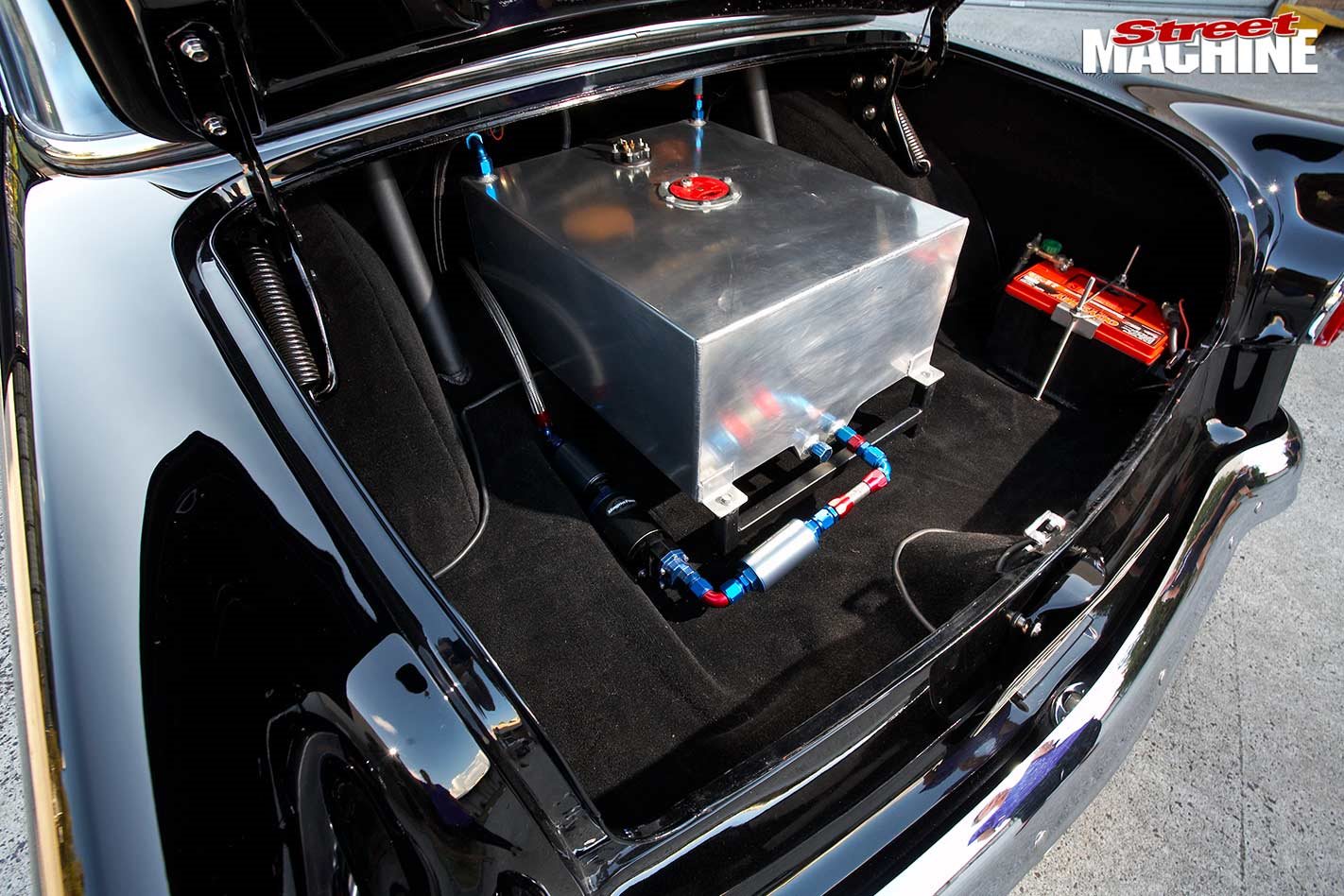 “We used to make those,” Peter says, revealing Stylerod’s involvement in constructing hot rod bodies and fibreglass panels in the 1980s. “But the moulds all went when I sold off that part of the business. Victor O’Neill owns all the moulds now and he can knock them out.”

Although the car received fresh rear panels, the tub work — with the chassis narrowed 10 inches and the rear converted to a four-link on coil-overs — gave him a headstart. Knowing what colour it was going to be, Peter made sure it was straight before Mark at Stylerod laid on the Standox Real Black.

Shouldering its way through the bonnet, the engine is rather large by itself. But it wears a pump, just to make it that bit bolder.

“My son Troy chose all the goodies to go into it,” Peter says of the blown 551ci big-block. “Most of it came from Summit and we use Orger Engines over in Bayswater to do the assembly. We put too much money into it to have it let go!” 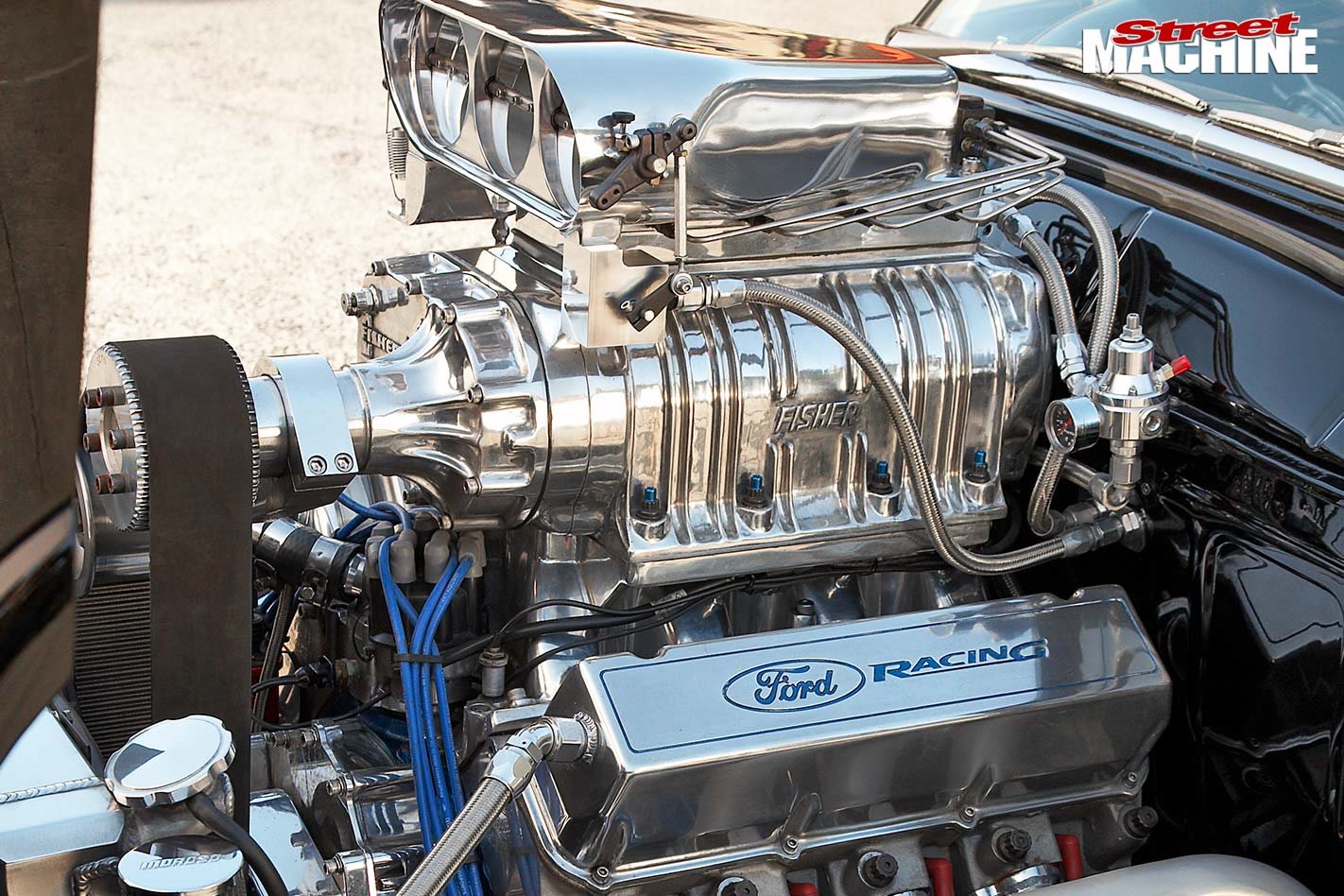 With 551 cubes, the brains behind the brawn and boost is a MoTeC, with eight injectors (and more to come) tucked under the Enderle Bird Catcher. Good ol’ EL Falcon thermo fans keep it cool and the whole lot is detailed in fine street style

“It was supposed to be a mild street motor, something I could drive anywhere, but I don’t think Troy knows what ‘mild’ is! You know what? If I ever say anything about his character, people simply say: ‘There’s only one bastard to blame for that!’”

After decades with manual cogs, the gearbox is now a C6 auto — manualised, with a 3500rpm converter in front of it.

So far, the engine hasn’t seen its full potential. Dyno work is ongoing and tuning the MoTeC system, with the injectors installed above the blower, hasn’t been completed.

“It’s been difficult on the dyno,” Troy reveals. “We can’t get a readout. We’ve had 4WD tyres on it but the traction is a problem.” 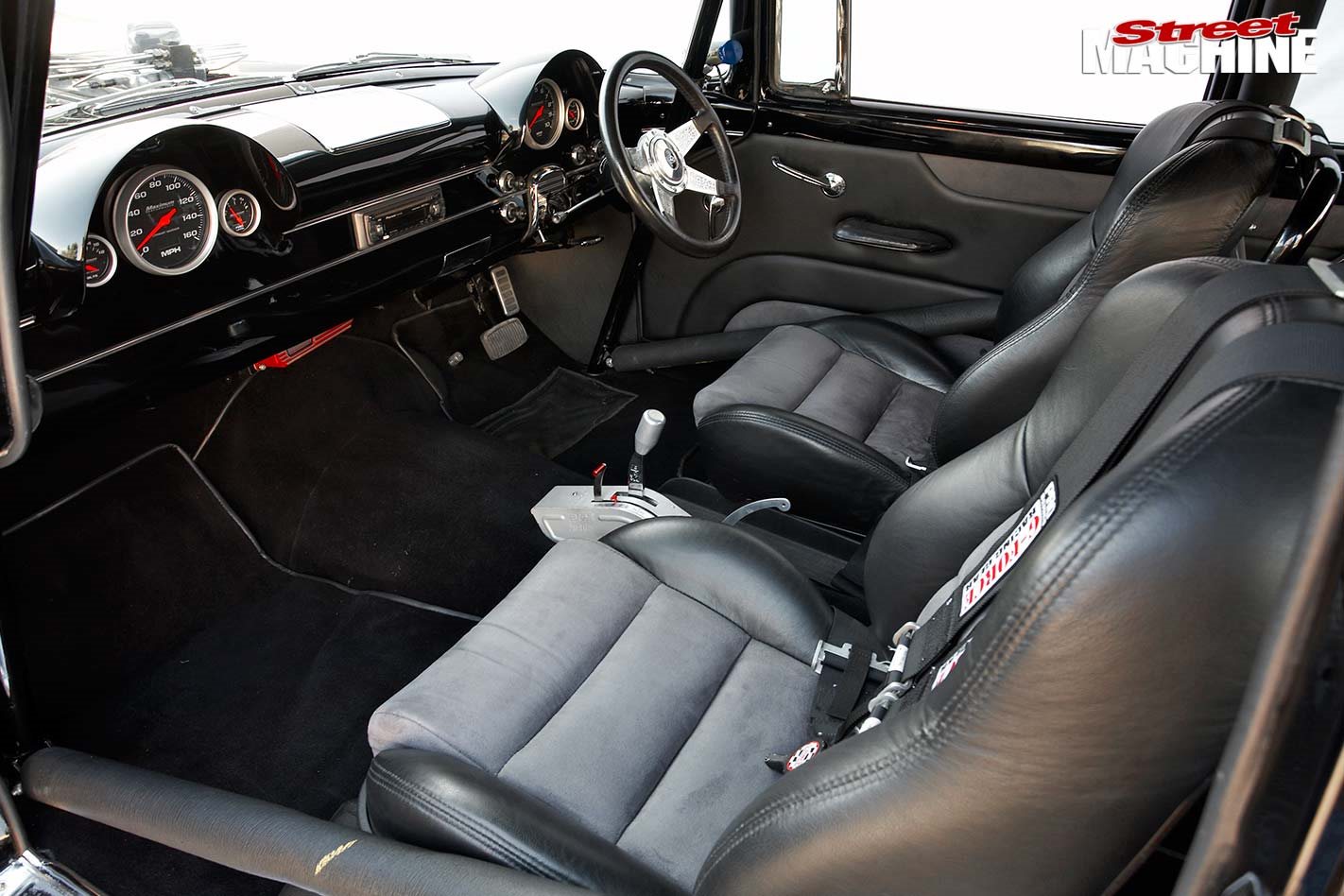 Late-model Falcon XR8 seats (sans headrests)  look suprisingly at home in the Cusso’s cabin. Why the tacho and gauges in front of the passenger? Why not? Car has a full ’cage and harnesses means the ’56 is ready for when it finally hits the track

Despite this lack of tuning finesse, the result is a terrific streeter.

“I could get into this car and drive it to Queensland. I drove it down to the Kustom Nats at Phillip Island at Christmas. Just beautiful! It drives and rides really nicely. You’ve got to just breathe on the throttle but it’s not a pig to drive.”

But Troy’s reckons there’s not enough fuel in it yet: “We’ll install more injectors in the intake runners. It can’t keep up.”

“We’ll sort it,” Peter agrees, “and get it to the track again. Time’s been against us but no matter what, I’m not into show ponies. There’s no point building a fast car and not putting it down the quarter.”

The Cusso has been through plenty of incarnations over the years, including this early 90s version, with two-tone red candy and black paint, red crushed velvet trim and a strong 460 BBF backed by a top loader. 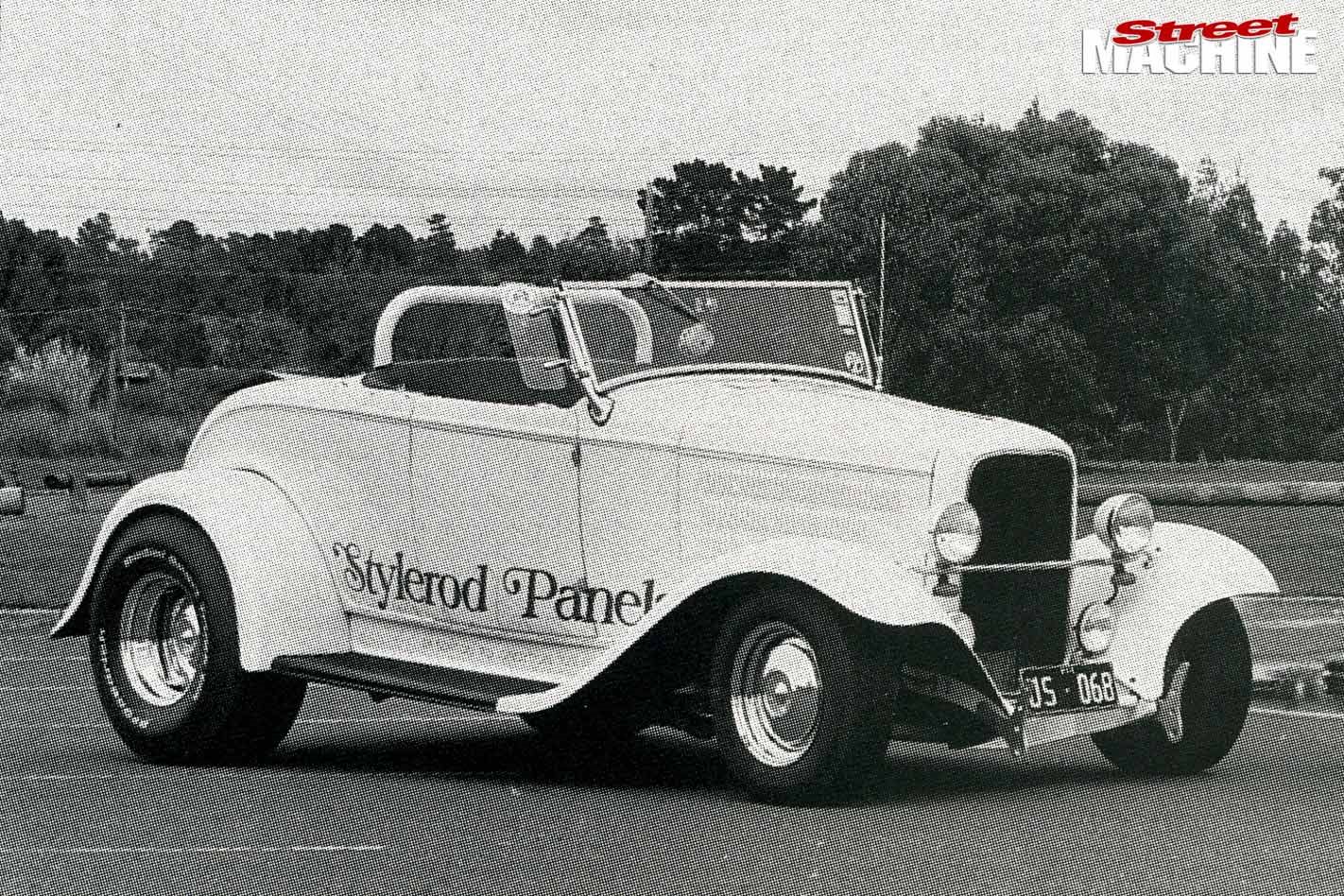 Stylerod also made its own fibreglass hot rod bodies in the 80s and early 90s — the ’32 roadster with the bitching stance was Pete’s personal toy. Pics: Graffiti Publications