Looking back on Allen Boughen's loud and proud '56 Ford Tudor

IF MARTIANS landed tomorrow and wanted to know what a street machine was, we’d send the little snot-skins up to Chambers Flat, near Brisbane, to meet Allen Boughen. Chances are, Al would sit ’em down, crack a couple of cold ones and tell ’em how he came to be called “Cusso”. And if the cosmic cucumbers still didn’t get the drift, a few high 12s on the Surfers strip in this show’n’go ’56 Tudor should certainly get the ol’ ectoplasm flowing. 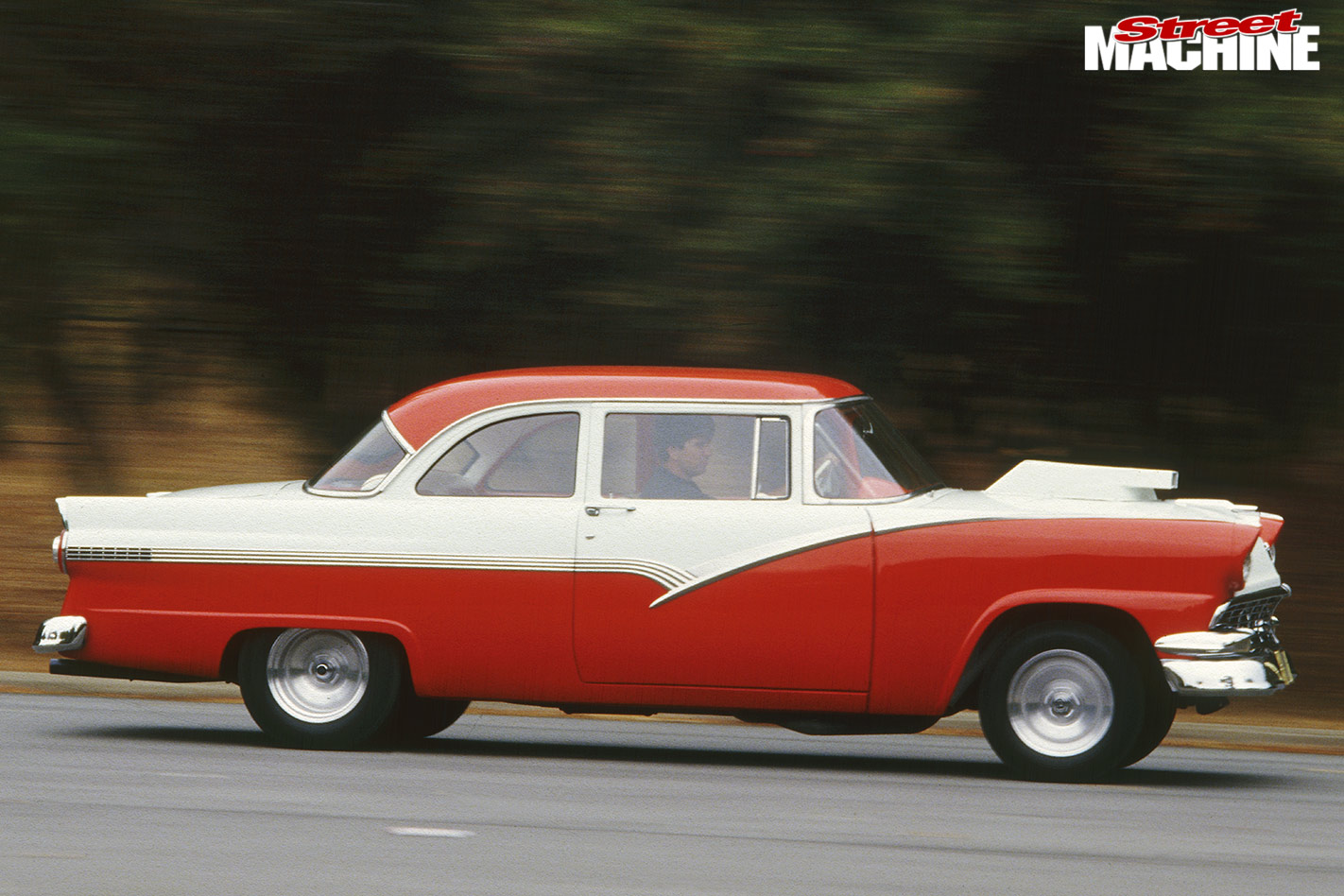 Allen runs a shop called Customline Spares, and he’s not the sort of bloke to stuff around with hidden meanings. “Cusso”, as his mates call him, specialises in panels, paint and parts for early Fords, and those eyes don’t see much else. This flip-front, white-over-red Cussie coupe was a monster performer in the Nats Burnout comp, and not by accident. Allen had taken a few months off work to get the thing completed on time. So after the long haul to Canberra, he told us, “I’ve given the thing plenty of noise…”

Allen says this is definitely the best Cussie he’s ever owned. And just how many Cussies has he had? “I’ve had about 25 of them, but this is the first one I’ve really taken heaps of trouble over. I’ve had some old fighters before this one.” Trouble. You take trouble to make trouble with a beastie like this one. Taking trouble, like two weeks’ worth of stuffing around to build the flip-front and get the gaps right. Making trouble, like 429 big-ported cubes positively thundering aggression and horsepower through a 2½-inch exhaust… 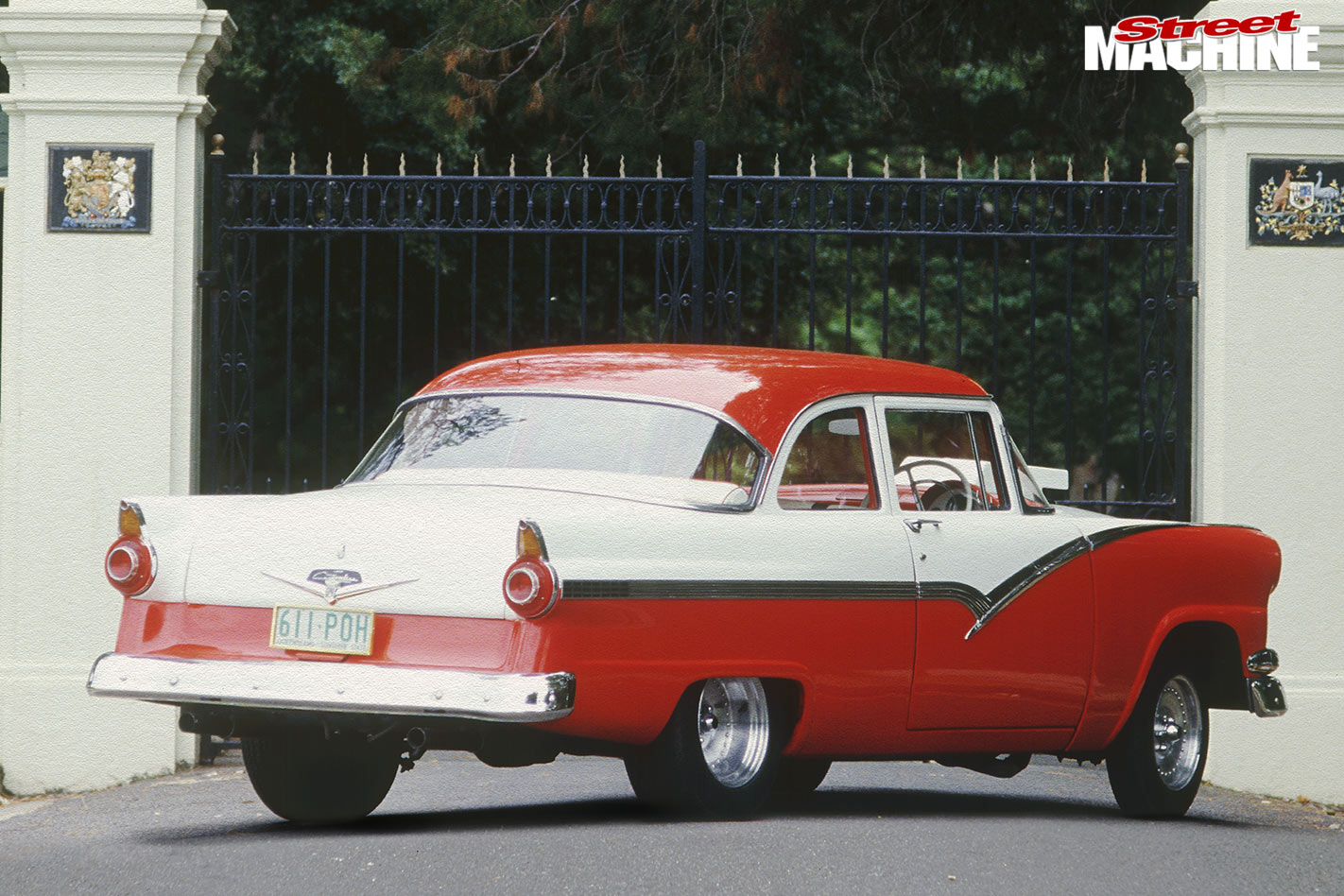 Being personally a purveyor of panel and paint expertise, Allen had a major head start when the shell had come apart. Everything, but everything, was torn down, and Allen says “there’s nothing on it that hasn’t come off it”.

A buddy, Noel Vinali, sketched up and built the complex slide-tilt mechanism for the front end before Graham Lachlan and Allen got stuck into the bodywork. “The front end was a bloody headache,” Allen explains. “It’s funny – you look at a flip-front and just don’t realise the trouble that’s gone into it until you try one yourself.”

Grecian White over Monza Red is what we’ve got here. Allen did all the paint himself, and chose this colour scheme because he felt it was appropriate to the rock ’n’ roll era in which the car was made. Amen to that. Likewise the interior, stitched up by Prestige Motor Trimmers of nearby Slacks Creek, got a full-on ’50s feel. Allen says they were great – the two-tone trim is an exact echo of the original, and the car looks like it’s just rolled off the ship after a 30-year close encounter. 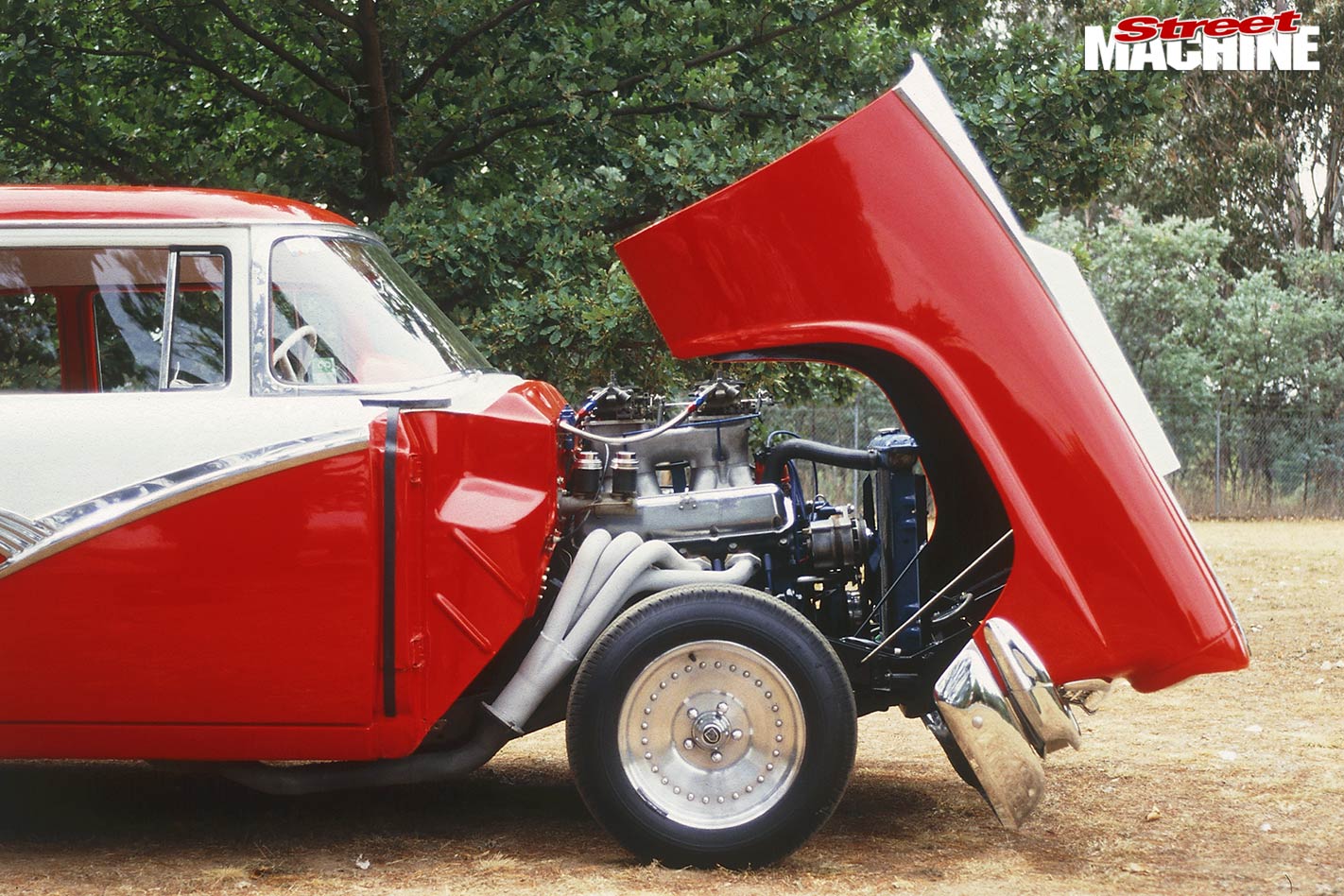 Under the bonnet, things tend to get a little more space-age. The whacking great Ford 429-cuber came out of the factory in 1970 as a high-performance unit, but it was a “tired old clunker” by the time Allen found it to drop into the Cussie. Doug and Steve Jack, of Jack Bros Engineering, did all the machine work for the full rebuild. Because it was a big-port, beefy engine ex-factory, Allen stuck with the original crank and rods. Pistons are stock forged items and the rings are as good ol’ Henry himself would have them.

A 580-thou lift bumpstick was one of the few alien parts used in the rebuild. Allen went for sturdier Speed-Pro valve springs, but the valves, rockers, pushrods and solid lifters are straight from the part numbers list. Jack Bros cleaned up the heads, onto which were bolted alloy covers. An Offy tunnel ram came up from Melbourne to start afresh beneath a pair of Holley 750 double-pumpers, while the headers are by Darryl Wells. A dual-point ignition system and wiring work was rigged up by Auto Electrics on Wheels, a local mobile concern. Other snakes in the bay are by Earl’s. 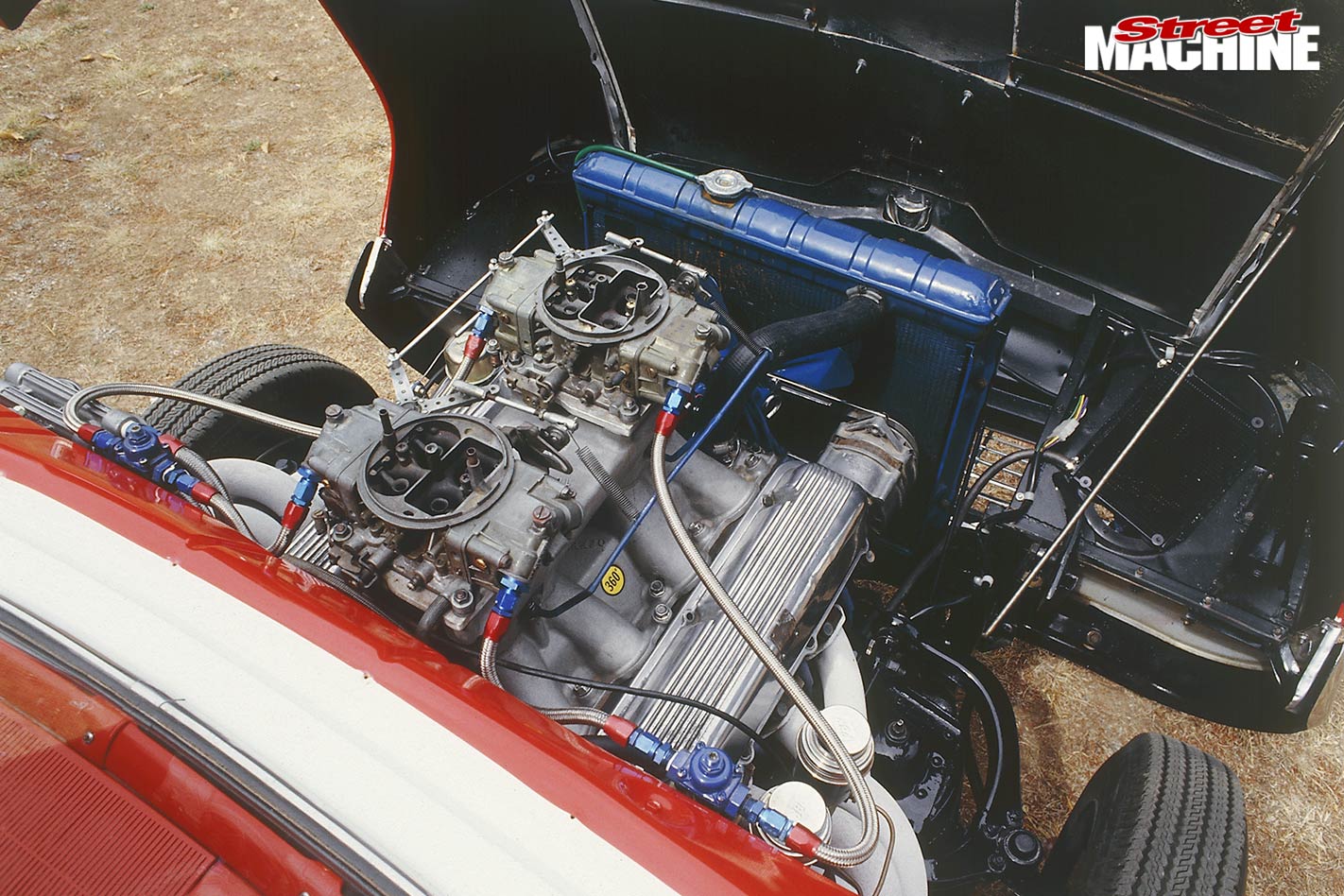 The C6 auto tranny is basically stock, but has a high-stall torque converter. A B&M Starshifter breaks up the nostalgia trip in the cabin. Highly logical, Dr Spock, that the bum’s gonna be of the nine-inch Ford, limited-slip variety with 3.89 ratio. Out the back, shortened tank axles carry stock drums, while at the front are XT Falcon discs.

Likewise, the suspension’s near stock, with new Armstrong shocks keeping heavy-duty front coils and rear cart springs in line. “It’s pretty basic in the suspension department,” Allen says, “but I usually drive it fastest in a straight line. I don’t do any desperates into corners.” We wouldn’t either on skinny, 15-inch diameter Kelly Springfields at the front and fat, square-shouldered Pos-a-tractions at the back. Any rate, they’re mounted on slick Center Lines, 5.5x15 and 8.5x15 respectively. 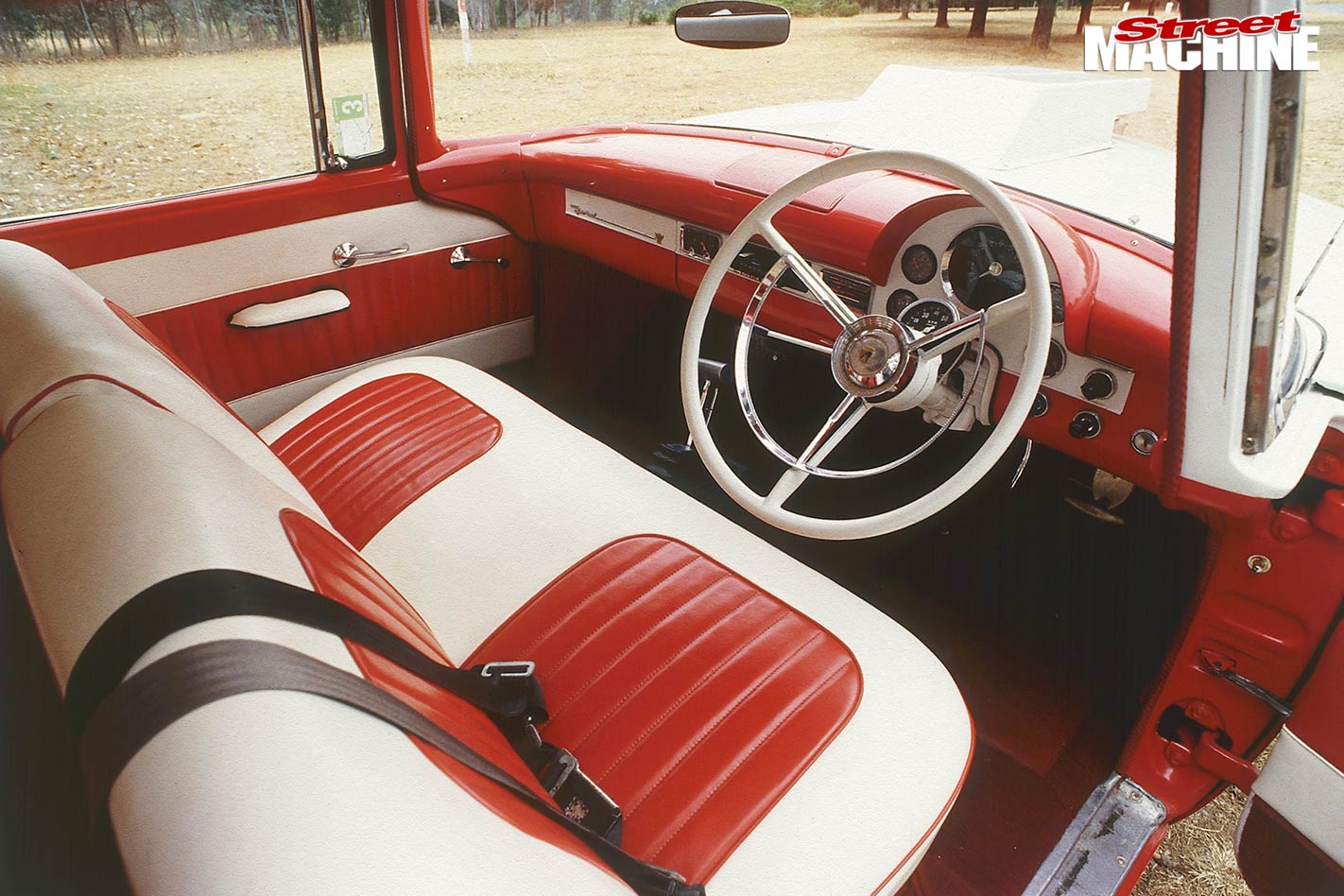 Allen says the work was “full-on for the last couple of months” before the Nats. He also had to get a truck ready to carry the Cussie to Canberra. The car was finished with two weeks to spare, and he reckons tearing the thing down entirely before he started was the best thing he could have done. “Getting mates like Noel, Graham, Greg Parker and Tim together really helped it along,” he says. “The car just sort of came together. We hit the key and it went – I tooled around up here for less than 100 miles before we went off to Canberra and gave the thing plenty of noise.”

This milk-and-blood mama has pulled a 12.8 at Willowbank, but Allen says there’s heaps of room for improvement. It’s got the capability to match its looks. 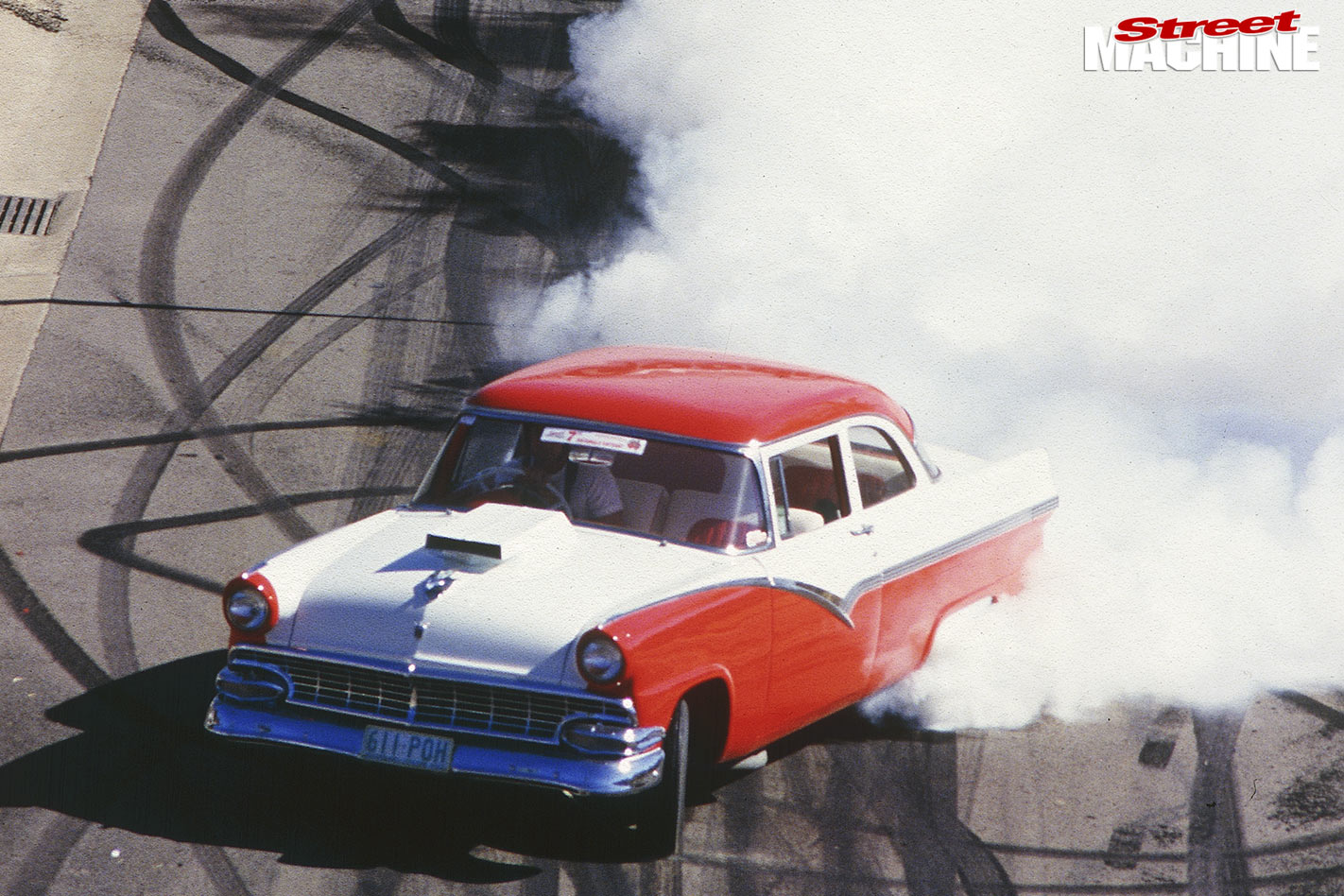 What’s more, Allen drives the car pretty regularly. “I’m sick of cars taking two hours to fix every time you want to drive them.” His previous Cussies were “just average streeters, nothing to get excited about”, but when Allen put his mind to it, he came up with a classy kind of Cussie that’s both practical and purty. And, for an old girl, pulls ETs to write home about.

Cool info: Quality, authentic looks belie this Tudor’s potency. And it’s got plenty, thanks to a tunnel-rammed 429 Ford breathed on by the legendary Jack Brothers. A 12.8 down the quarter, and monster performance on the burnout pad at Summernats assure Allen’s car a place in the history books. And yep, Allen is still keeping the faith all these years later