This nine-second Chev drinks 80 litres of methanol every 20km

AHH, the ’57 Chev. It’s a motoring icon that has delighted petrolheads for the past 50 years. Build yourself a two-door pillarless coupe, add a blower and you’ve got an automotive wet dream in the making.

“They’re the toughest cars in the world in my opinion,” Mark Camilleri reckons. 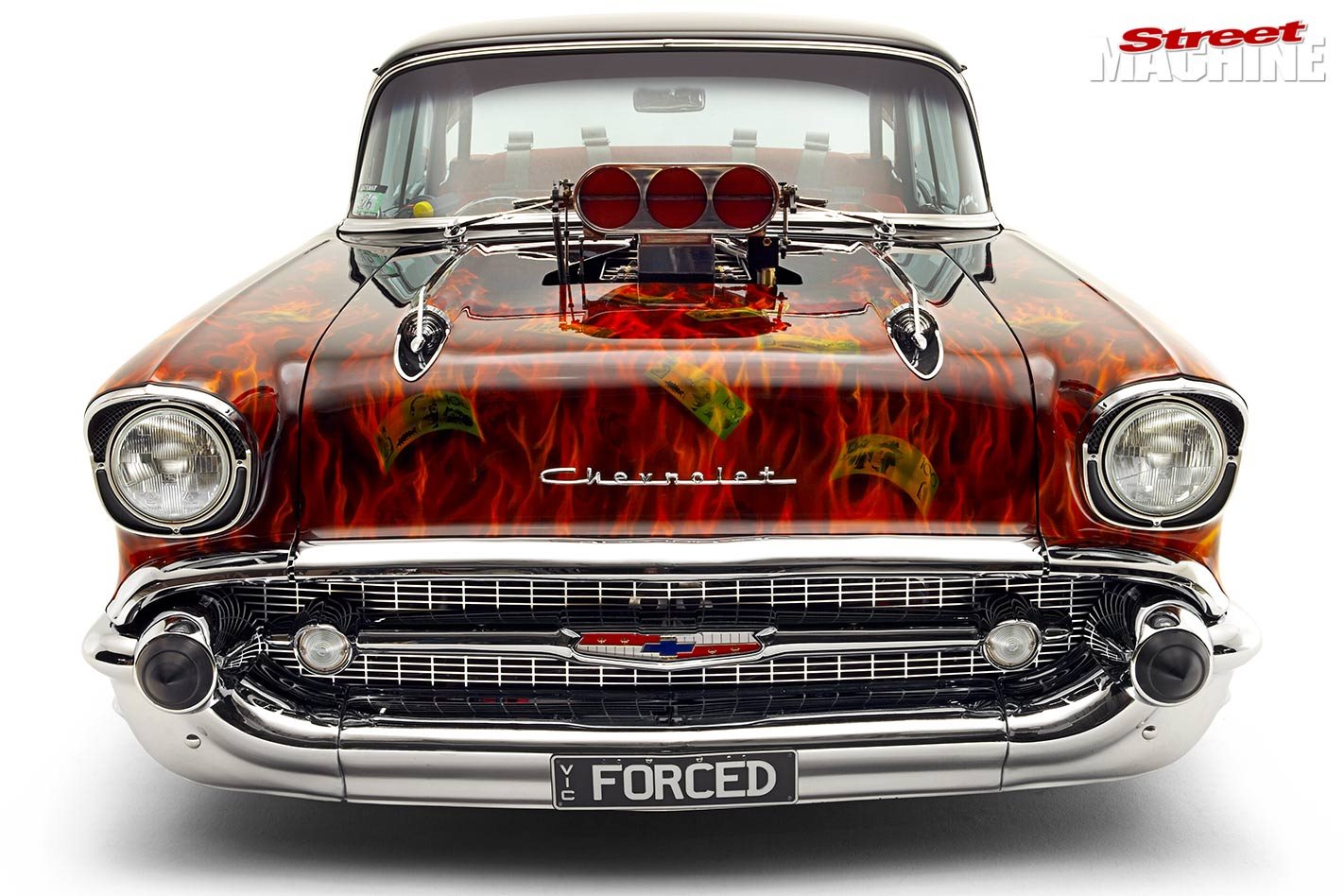 It’s hard to argue. If the good old ’57 Chev has a fault it’s that it’s too popular, something Mark was well aware of when he built this car and that’s probably why it’s a bit different to most other Chevs cruising the streets.

We’ve seen many cars over the years with elements of what Mark has done but none that’s had it all in one package.

Yeah, you read it right the first time; this bad boy has just run the standing quarter in 9.5sec at around 150mph. And the funny thing is that Mark and his mates are only mucking around with it so far.

“We’re not taking this seriously; we’re just playing,” says Mark. “It’s all very casual. If we can, we’ll hit eights quickly and then put it away but I don’t care if I run an eight or not.” 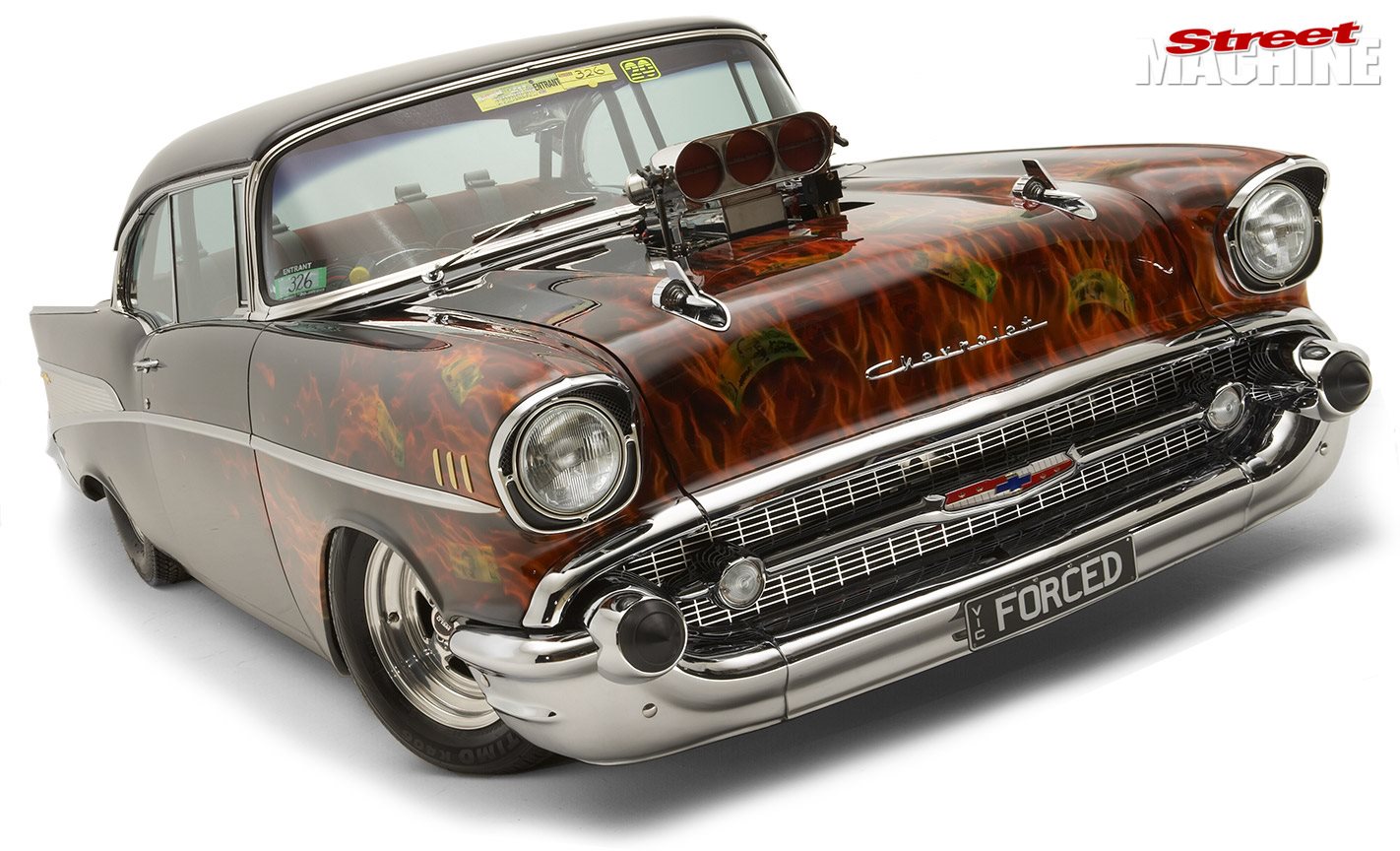 We’d like to see what these guys could do if they got serious because the big Chevy has only hit the track three times so far.

It all started around four years ago when Mark bought himself the ’57 as a rolling shell, which he’ll agree was a mistake: “It’s a lot harder building a car that you’ve never seen together.” 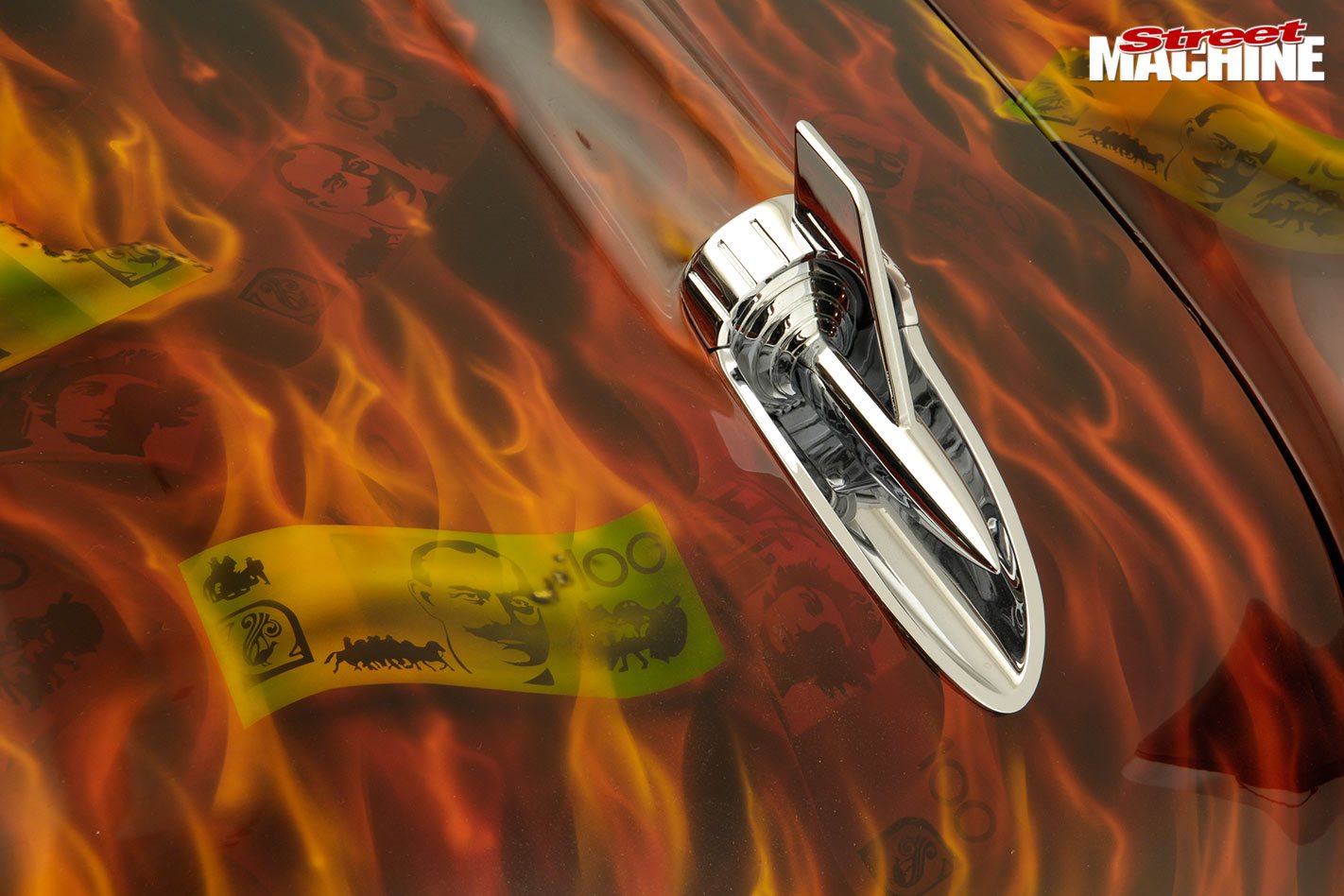 Straight away Mark ordered an engine, gearbox and diff. For a car of this size and weight, everything has to be as tough as nails to survive at anything above walking pace. Brett at BNR Engines was chosen to put the donk together; with his experience in blown hydroplanes, Mark knew he was in safe hands.

The core of the powerplant is a Merlin III block filled with Eagle crank and rods, along with a set of JE 8:1 pistons — final capacity is 540 cubic inches. Dart 390 cast iron heads seal the deal, with a Crower roller cam and Crane roller rockers controlling the valve timing. Boost is courtesy of an 8/71 Littlefield blower and an Enderle Birdcatcher peeking through the flamed bonnet. It’s got plenty of grunt, no doubt about that. Mark’s got proof from the quarter-mile dyno: to punt a two-ton Chev down the quarter in 9.5 seconds takes more than 1000hp. 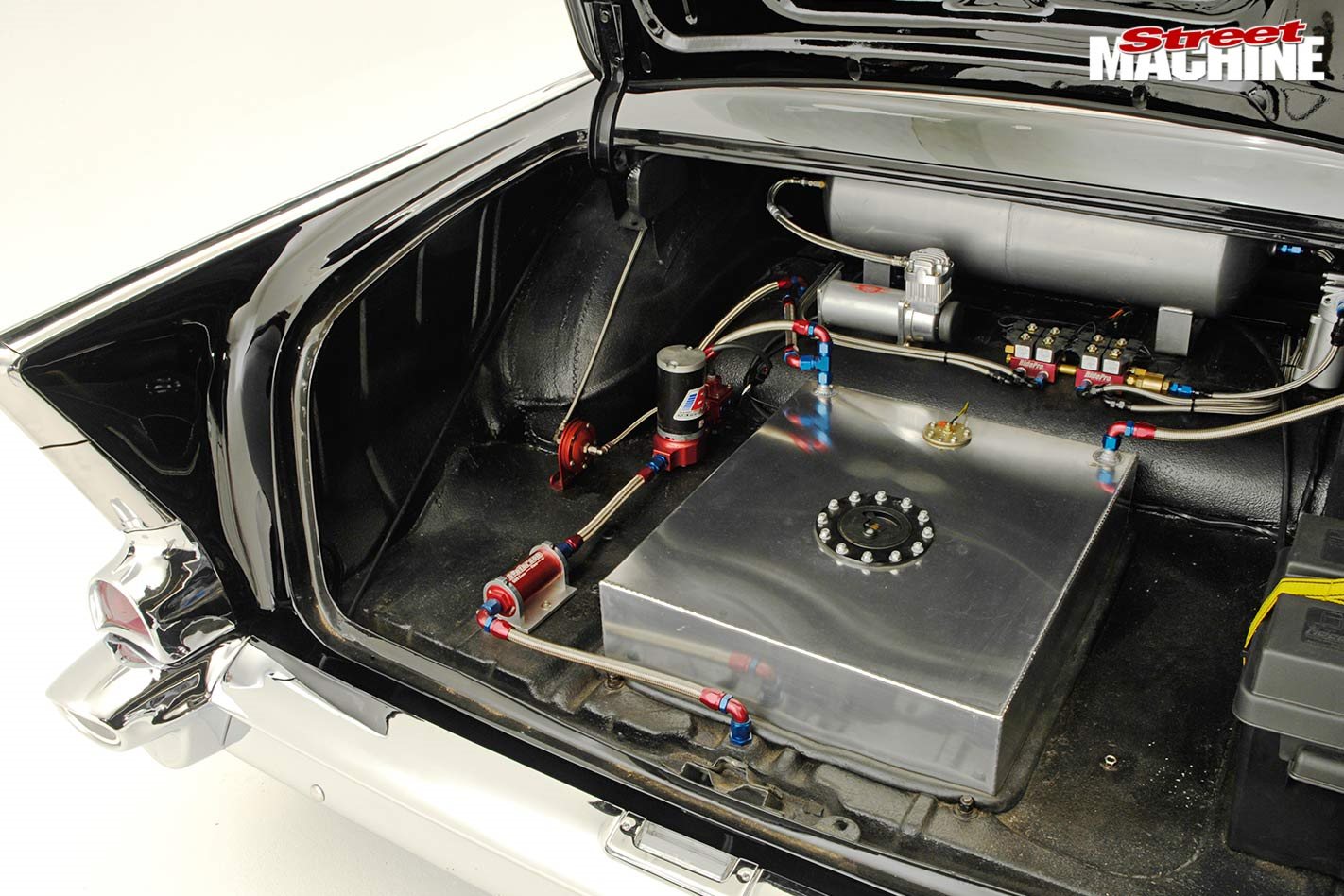 At the moment the boys are running the mill on methanol but with its relatively low compression it wasn’t really built for that. Even with boost, methanol likes a bit more compression than Mark’s running. After the drag efforts are finished, the engine will be swapped back to pump premium unleaded and hopefully achieve better fuel economy. “An 80-litre tank of methanol lasts 10 minutes or about 10km, whichever comes first,” Mark says. Well, it used to. Now they’ve leaned it out a bit more, the range is 20km. So you can go 10km each way!

Yep, she’s a bit heavy on the juice but it’s running bloody rich. You could probably run a second car on what comes out of the tailpipes. 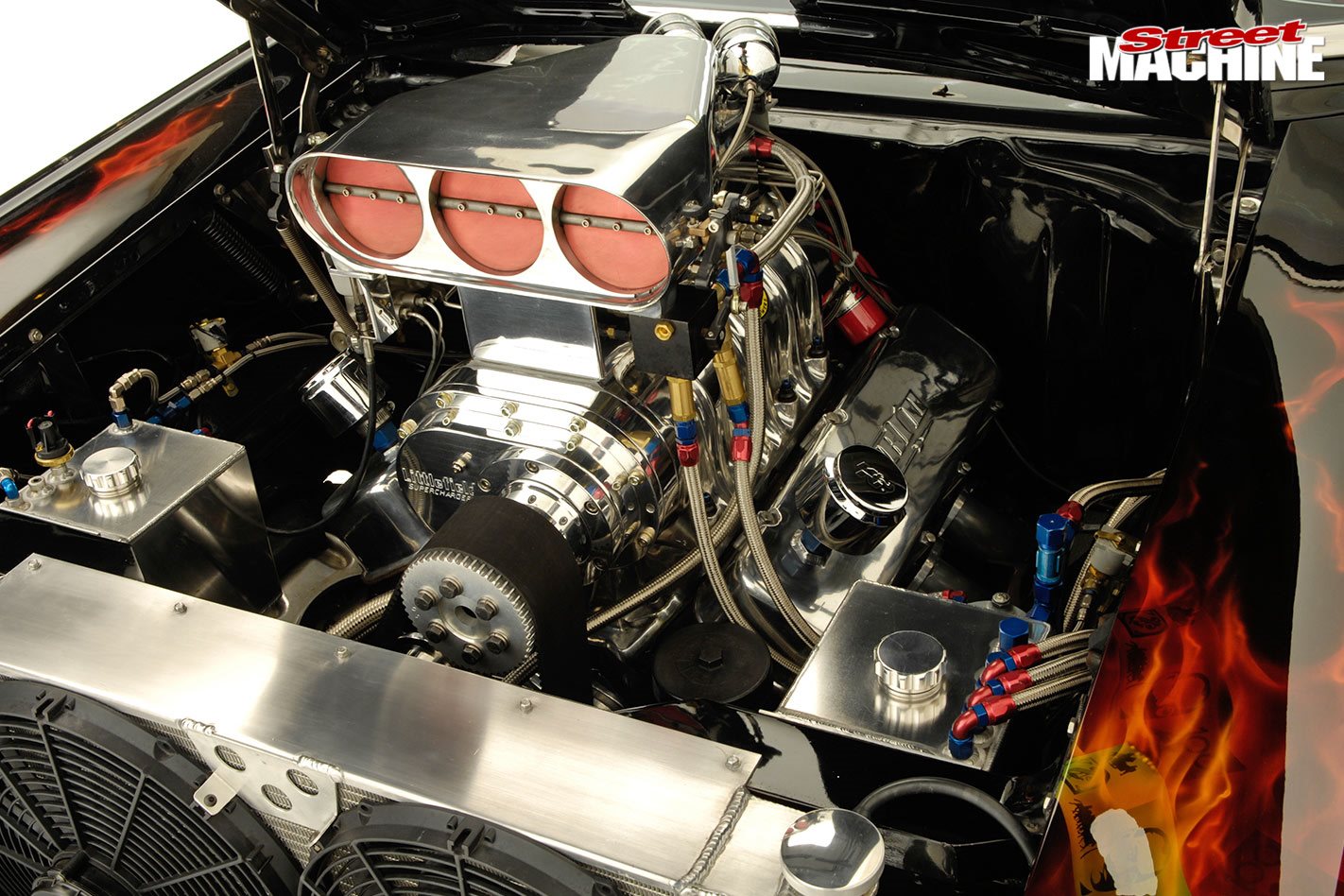 Heart of the beast — fuel is pumped from the 80-litre cell in the rear to the five-litre tank on the passenger side of the engine bay. From there an Enderle 80A mechanical pump pushes it into the engine via injector lines under the blower hat

Being so heavy, a two-speed Powerglide wasn’t going to cut it so Hugo’s Raceglides hooked Mark up with a stout Turbo 400 trans, and with such monstrous low-down torque he uses a 2700rpm converter to get the Chev off the line. Out the back there’s a strengthened nine-inch decked out in Strange gear, along with 35-spline axles and Romac floating hubs. Shockwave airbags and custom four-link suspension keep the rear end off the deck and help the tyres grip the ground. A lot of people told Mark that he’d never run decent times with airbags in the rear but he’s proved them wrong so far.

The front end is held up with a pair of Air Ride bags, and Mark loves the flexibility that the air suspension gives him when it comes to negotiating obstacles. Putting a lowered car on a trailer is normally a nightmare but with the airbags, all it takes is the flick of a switch to give plenty of clearance. 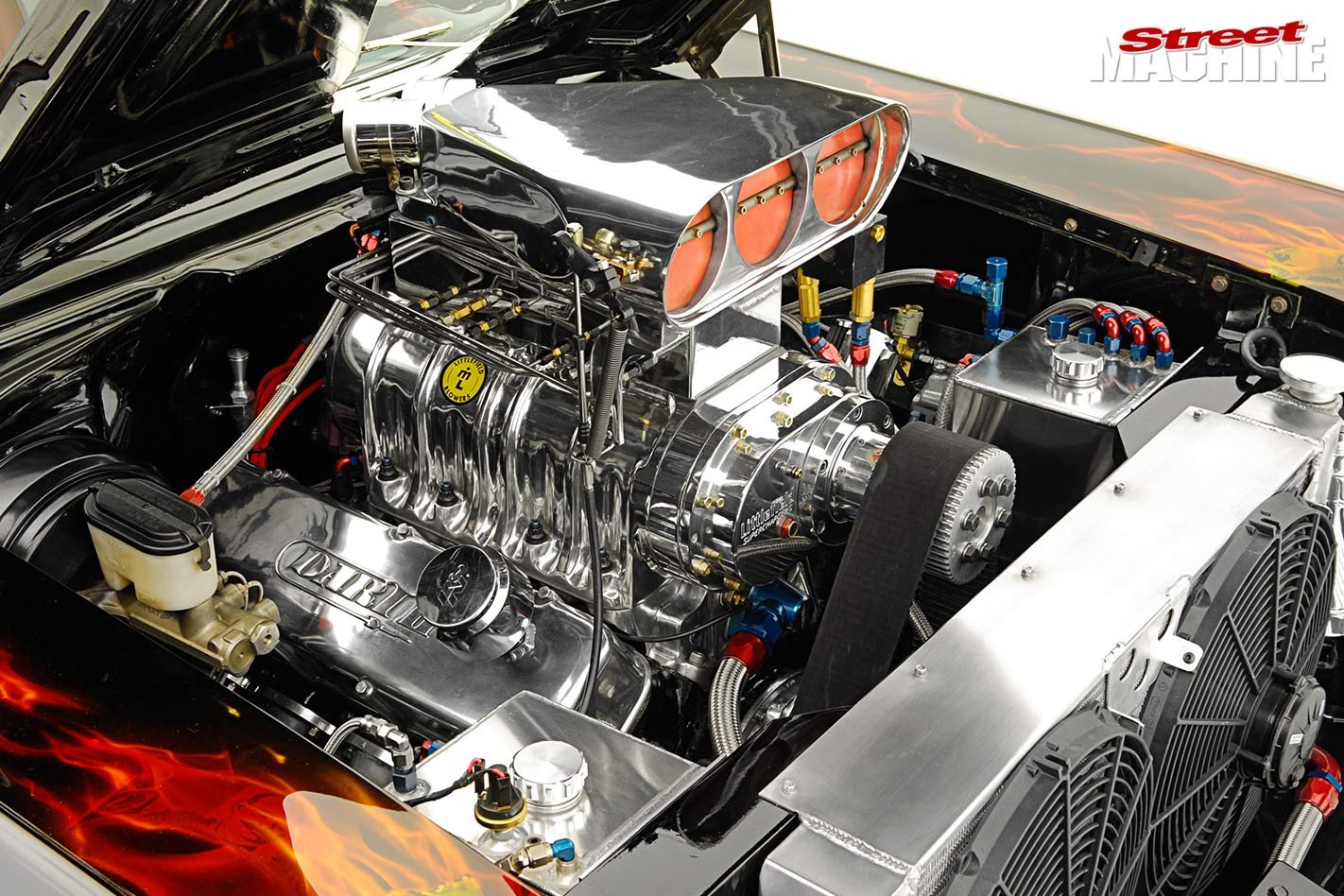 Mark and his mates worked on the chassis while Chris Egery went to town on the rusty shell. Where was the rust, Mark? “Everywhere! It took Chris six months to get the body right but he’s done a really good job.”

The back end has been mini-tubbed as far as the standard chassis will allow and there’s a pair of meaty 12.5in M/T Sportmans on the rear. Mark tried to get the car down the track with the Sportsmans on the back when the Chev made its track debut.

“The first time we ran it, it wheelspun the whole length of the track. I took it out assuming it would stick,” says Mark. After that, all track excursions were made using slicks and that dropped the times straight into the nines, complete with air suspension and full exhaust. 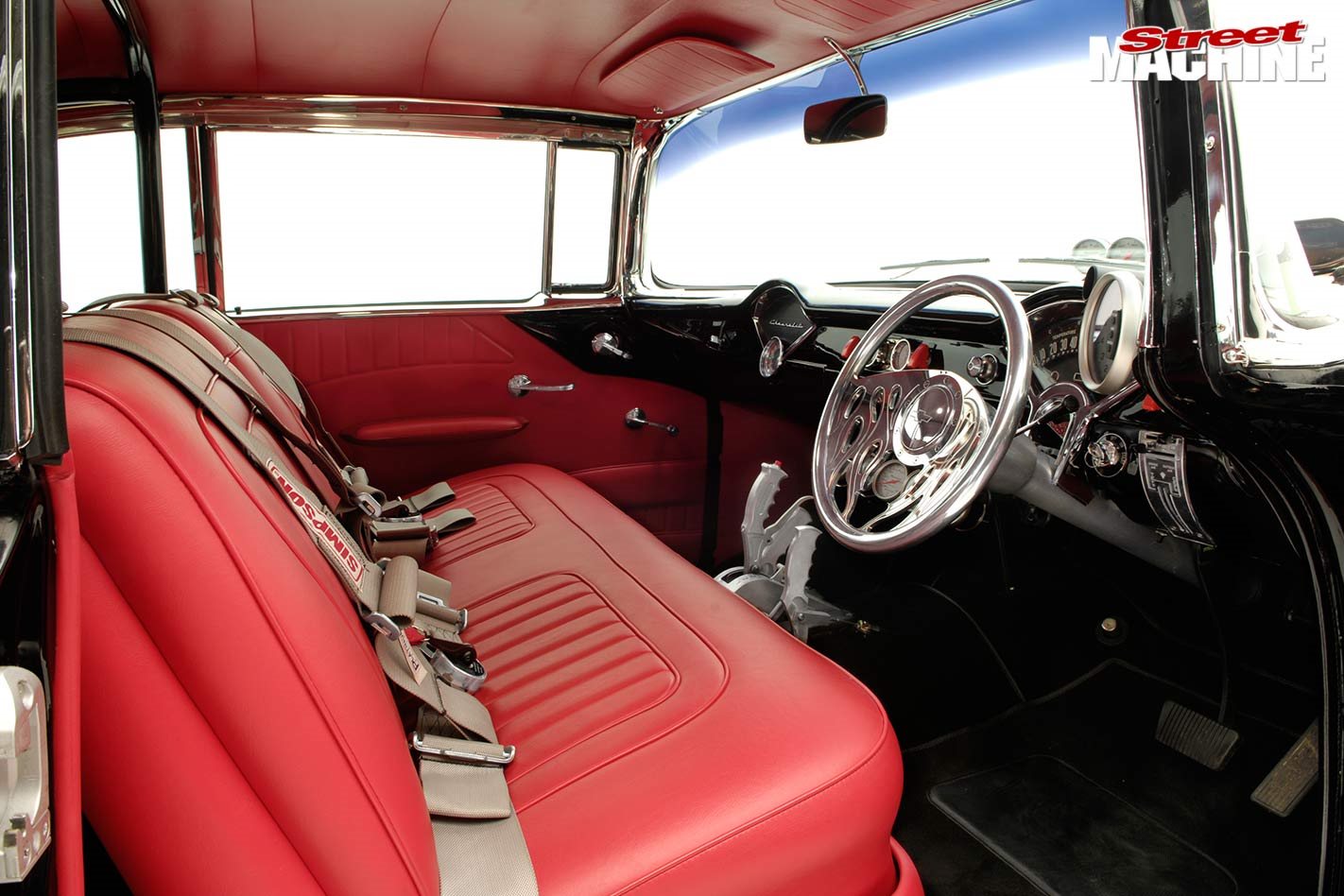 Putting the interior back together was a nightmare because the car was purchased as a shell. Mark hit the shows to find completed examples to see how it all worked

On the outside, the classic Chev was treated to a coat of glossy black by Fixwell Smash Repairs before Lyn Chippendale from AirFx laid on the realistic flames complete with burning $100 bills. There are 57 of them, and they pay homage to the cash that the build consumed.

Reconditioning the stainless trim was a full-on job, one that Mark took upon himself. 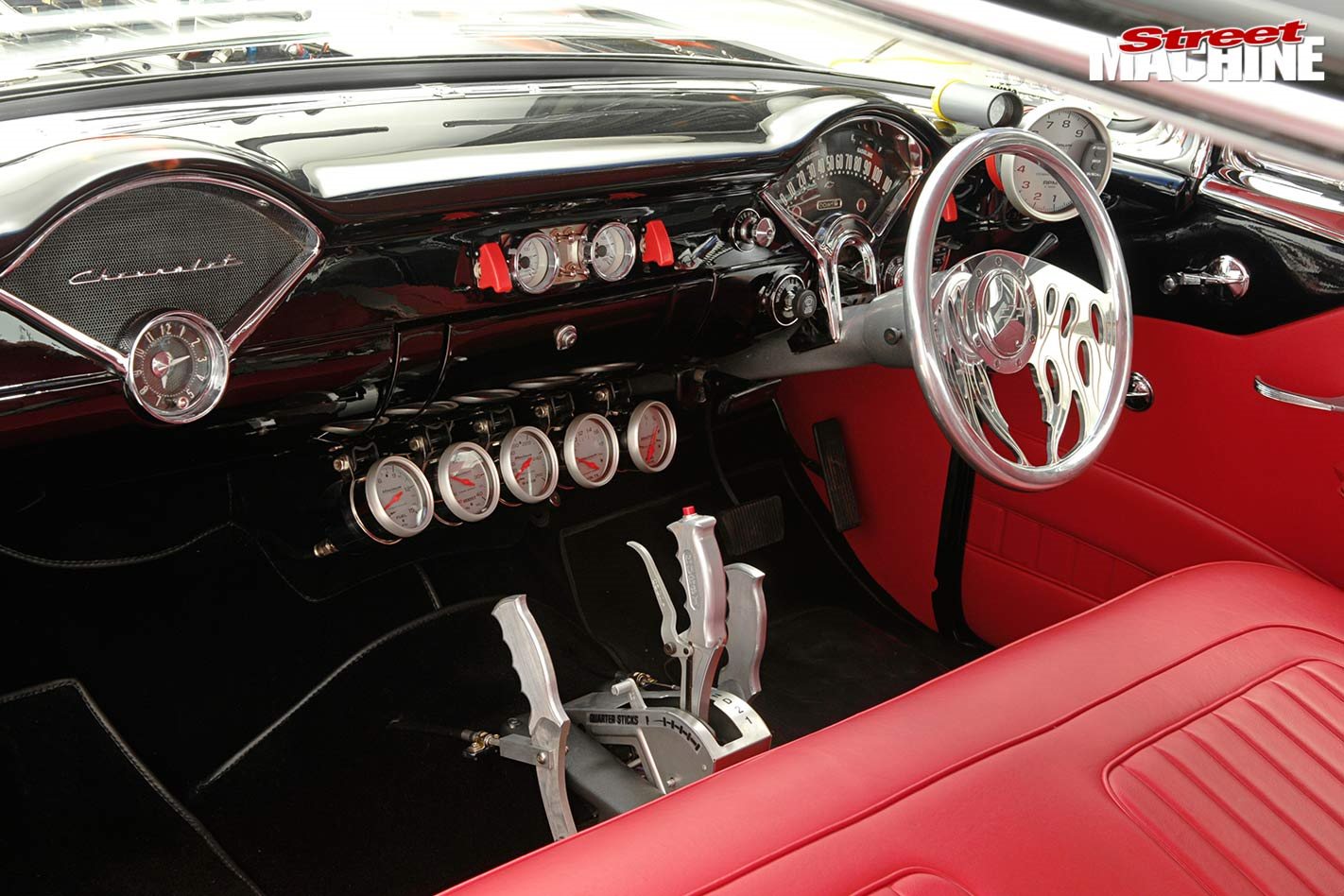 Classic Chevy styling with a bit of help from Auto Meter, Billet Specialties and Hurst. The levers beside the shifter control the parachute and fuel flow — pushing forward on the right hand lever leans the engine out, allowing some rough tuning on the go

“I beat it and prepared it every night for about three months,” he recalls. He must have the patience of a saint because working stainless trim is one of the hardest jobs around: “You’ve got a fine tolerance to work with because it’s so thin,” Mark says.

As a cabinet maker, Mark’s pretty good with his hands and there are plenty of areas where he met the challenge, like making the 3.5in exhaust system from a box of bends, or creating a working air filter in the injection block under the blower hat. Even those handles (parachute and fuel flow) either side of the shifter are his. They’re all handmade and there’s a heap of other examples in the car. 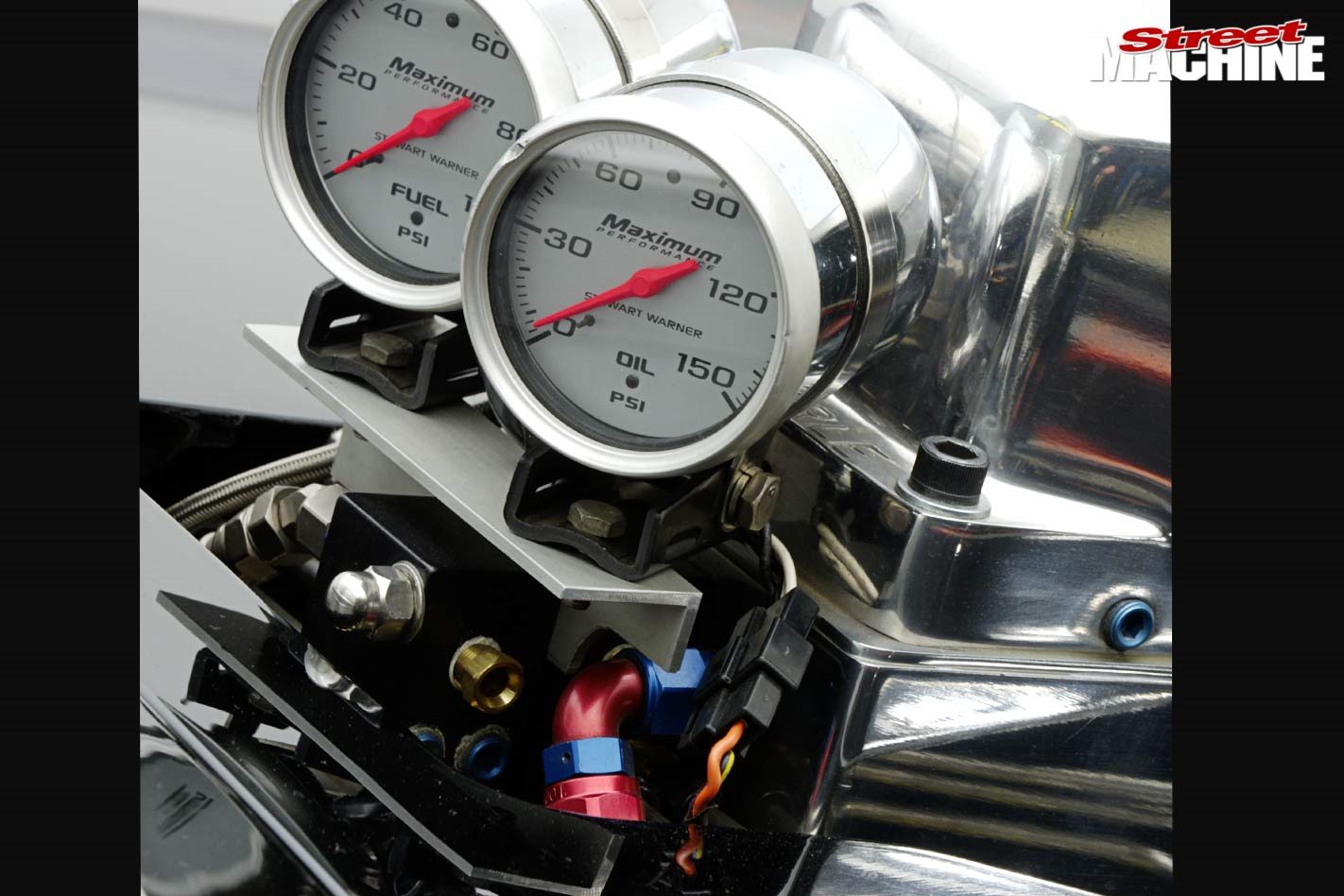 Talking about the inside of the Chev, how about the fact that Mark has gone with classic bench seats, wrapped in red vinyl? Better looking than a pair of generic race buckets any day. There’s also a tastefully hidden rollcage inside that the guys built, and each occupant benefits from a full harness for every seat.

Even with Mark doing a lot of stuff in the shed, the Chev still cost him a motza. At times he thought about giving up but by sticking it out, he’s created a killer machine — one that make no apologises and takes no prisoners.

It’s pure adrenaline in a box and all about the fun factor: “It’s good to get the enjoyment out of it after all the hard work we put in.” 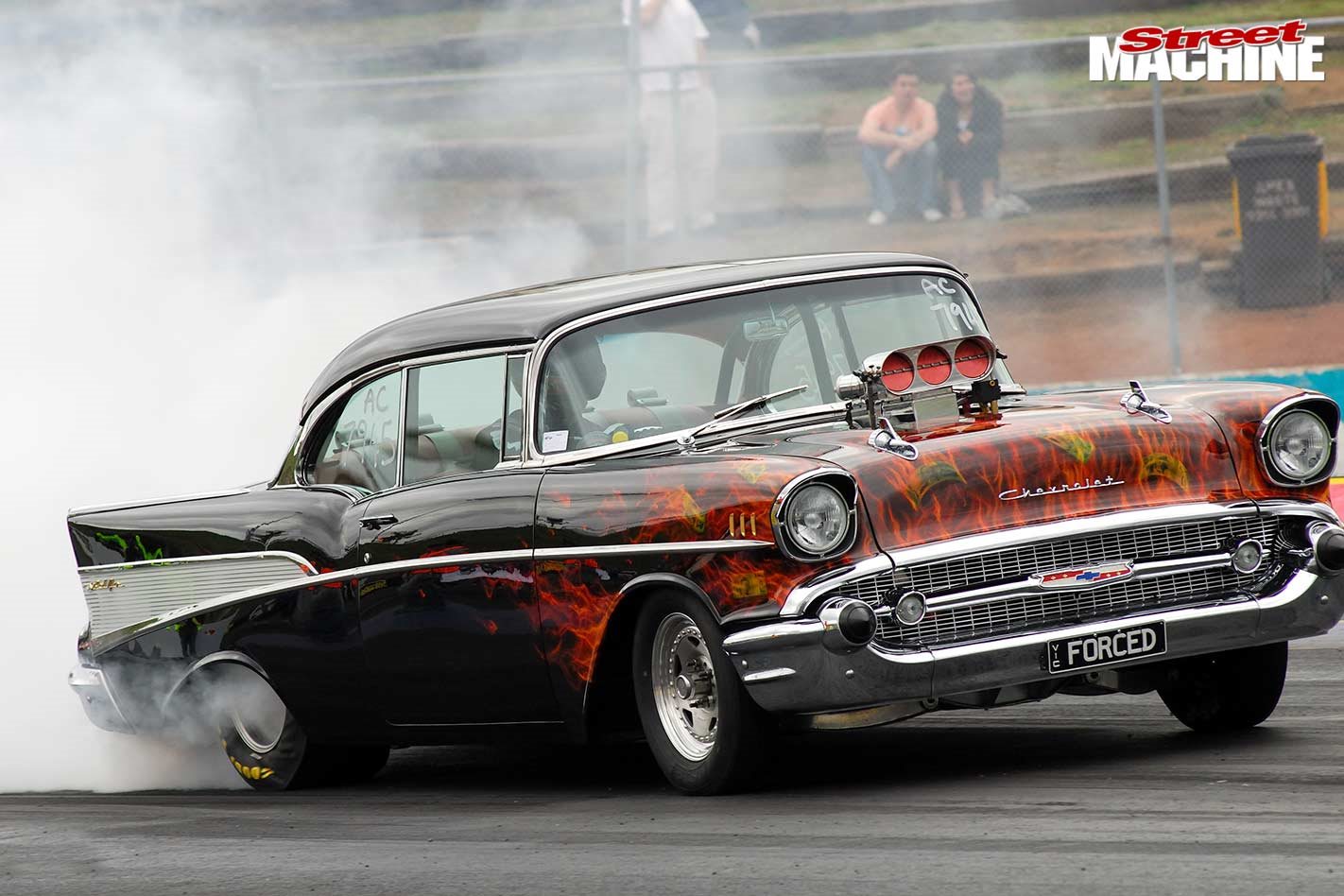