YOU CAN hear the naysayers now. “Street driven? Yeah right! It’s too outrageous, too powerful and just too damn straight for any sane person to drive it on the road.” Uh-oh — Ted Krolo built his 1957 Chevrolet Sports Coupe to drive. He not only drove the beast to our photo shoot but regularly hits the road to attend some of the best events his state has to offer, including the Cruzin Nostalgia Drags, the Melbourne Hot Rod Show and even the Kustom Nationals at Phillip Island, some 140km from home. 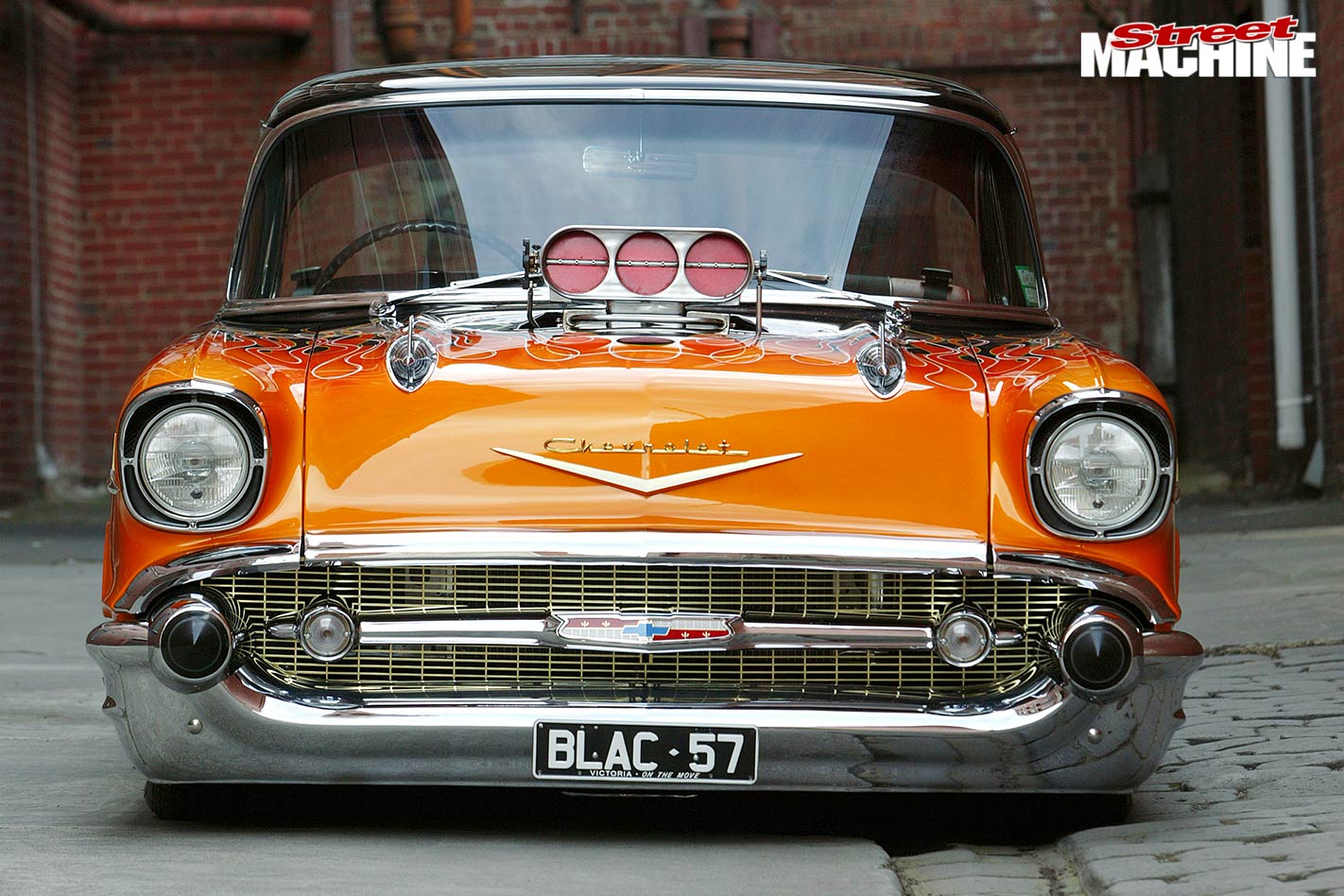 “That’s what it’s all about,” he says. “What’s the point of building these flash cars if they just sit in the shed?”

The Chev naturally gets more than its fair share of attention when out cruising but – at least so far — not from John Q Law. “I haven’t been pulled over yet,” says Ted. “I guess they can tell it isn’t just a hoon car.”

The ’57 is Ted’s first serious streeter, though he did set out to build an XD Falcon, back when he was a lot younger.

“I never ended up finishing that car; I never had enough money. Then I got into concreting and worked until I was in a position to do it properly.” 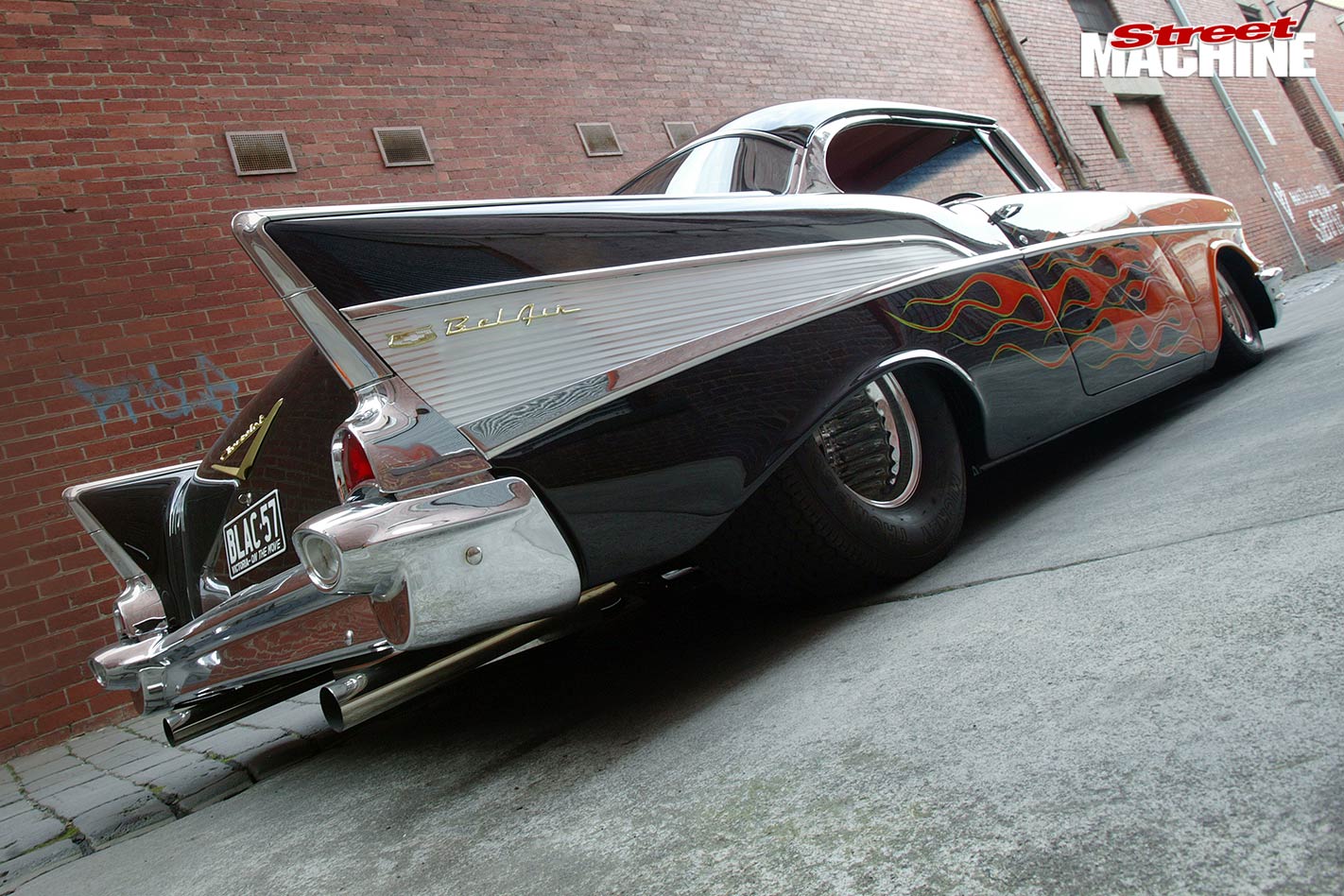 Ted found a shabby ’57 to use as a starting point and set about turning his dreams into reality. The plan called for a bunch of Pro- Street attitude but with real driveability, retaining the Chev’s signature chrome work, badges and bullets. The end result closely reflects the original plan, with the notable addition of the wild Matt Egan flame job.

“That was my daughter Tania’s idea,” says Ted. She would have been eight at that stage but she knew it should have flames.

“Women are always right, aren’t they?” Ted’s wife Zdenka — a pillar of strength throughout the build — would probably agree! 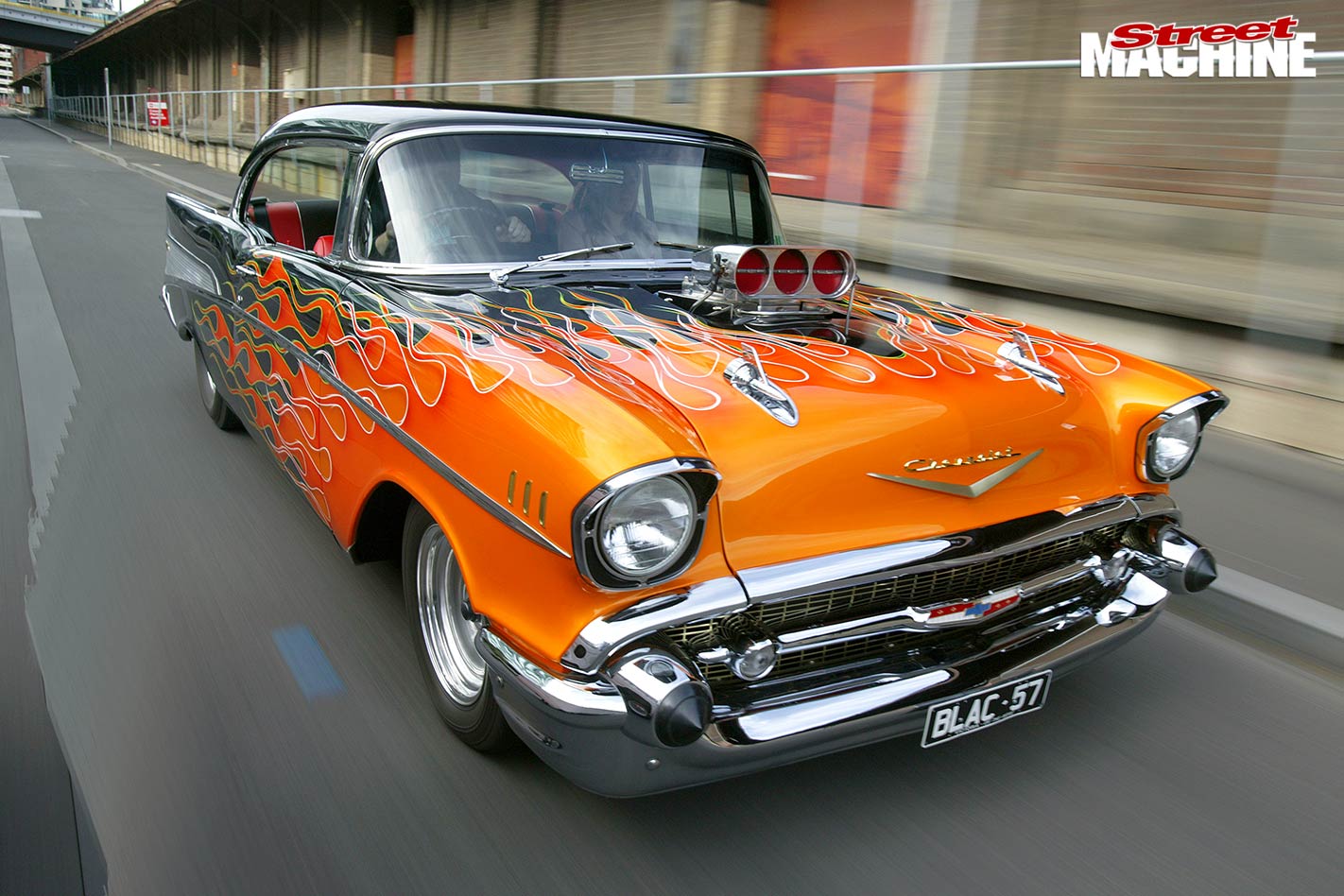 Body and chassis mods were performed by the boys at Waddington Street Rod and Restoration Centre, in Castlemaine, Vic. They replaced the sills and quarter panels, smoothed the firewall, added the wheel tubs, spliced in an HZ Holden front end and raised the floor so the exhaust could be tucked above the chassis rails — important when you get around in a car this low!

Shane Taylor from Waddington then painted the whole lot in PPG Midnight Black — the ultimate test of quality panel work. If you’ve seen this car in the flesh you know the Waddington boys passed with flying colours.

As he did with the outside, Ted wisely decided to leave the interior of the car fairly close to the way Chevrolet intended. Pat Mesiti of Sunshine Motor Trimming spent more than 150 hours restoring the original trim in cloth and vinyl. Ted retained the factory tiller but added a set of Dakota Digital gauges into the factory binnacle. Sweet! 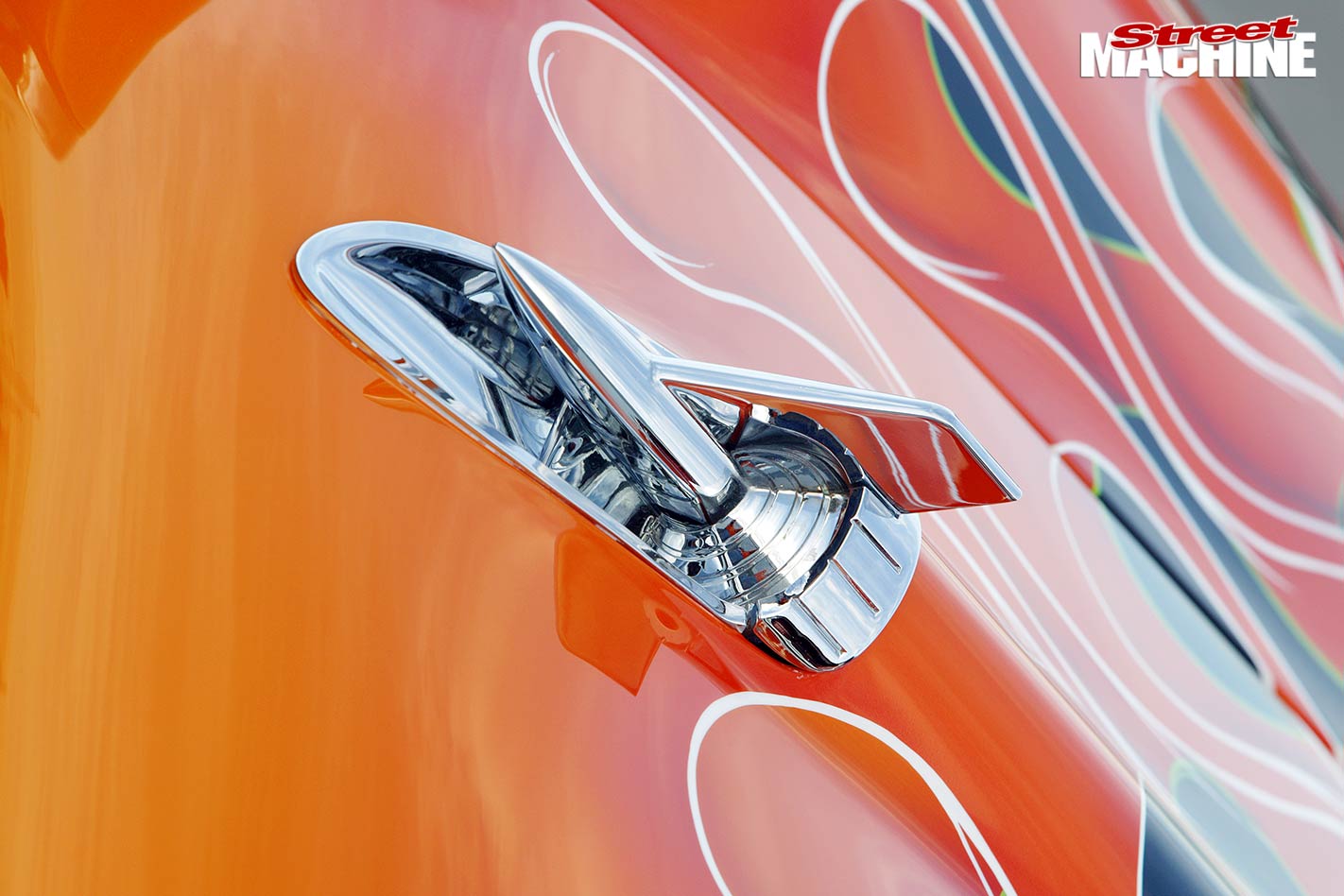 The driveline side of things was handled by R&C Automotives in Bacchus Marsh. The guys there faced the difficult task of building a motor that would not only make way too much power but would also be turn-key reliable on pump fuel and look super-cool as well. Their solution was a 540ci rat motor based on a Merlin block with JE blower pistons, a Competition roller cam, Edelbrock heads and SCAT crank and rods. That would be enough for most people, but on top is an eight percent underdriven Childs and Albert 8/71 blower on a BDS manifold!

The key to making the combo driveable is EFI. R&C modified the BDS Bird Catcher hat to accept 16 fuel injectors controlled by a Microtech ECU, with spark provided by an MSD electronic distributor. Maztech of Melbourne’s Anthony Rodriguez put in plenty of hours tuning the beast, making sure that it runs like clockwork whether at idle or full throttle. Peak rear-wheel power stands at around 750hp. 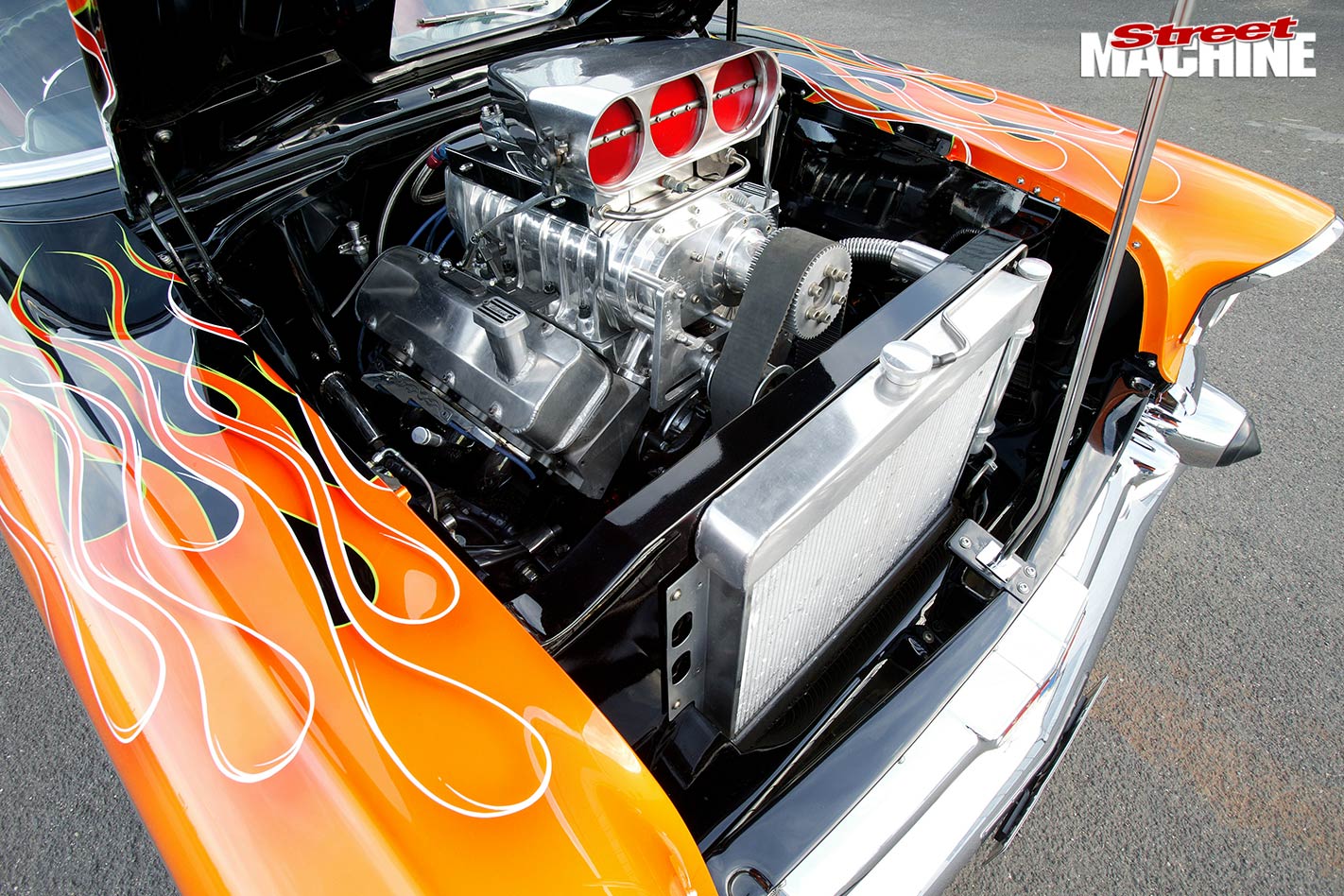 The Chev runs a 540ci big-block full of goodies – and, just in case boredom sets in, there’s an 8/71 Childs and Albert blower

Behind the big-block is a full manual Turbo 400, matched to a 3500rpm Dominator converter. Out back is a full floating nine-inch, complete with a 4.11:1 Strange centre, 31-spline Moser axles and mini-spool.

The task of bringing the Chev to a halt falls to Leyland P76 discs up front and a set of Commodore units at the rear. The car’s wicked stance is thanks to a set of Shockwave airbags sourced from Air Ride Suspension Supplies. 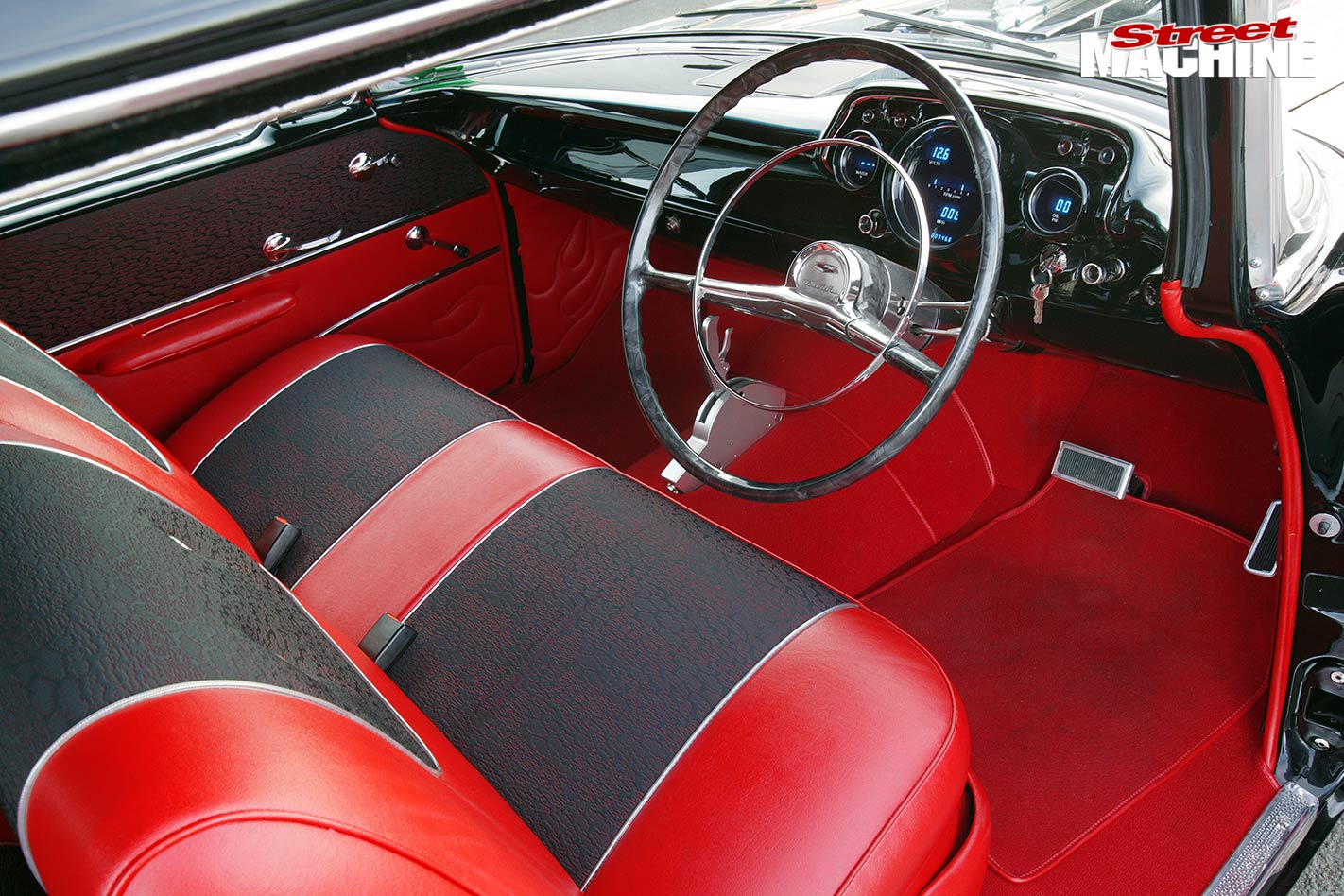 So how does she drive? “It’s scary on the street,” says Ted with a laugh. He gave the ’57 a run at Calder Park for last year’s Nostalgia Drags and turned in a flat 12 on street rubber.

“I’m happy with that; it’s not a drag car. I took it pretty easy, left the line in second gear. The last thing I wanted to do was to hit the wall. It was fun though.” Sounds like it, mate!

Cool info: Ted’s Chev is a rolling lesson in classic street machining style. The key is restraint – Ted knew that a slammed, tubbed and blown ’57 Sports Coupe doesn’t need airbrushed skulls, a brace of Auto Meters on the bonnet, crazy oversized billet rims or any other bling to make its statement. Mat Egan’s beautifully executed and pinstriped flames design are the finishing touch