Born under the Texan sun, this custom wagon from Boerne Stage Kustoms is years of work manifested. This article was originally published in the April 2011 issue of Street Machine

WHEN you think about hotbeds of hot rodding, Texas isn’t the first place that springs to mind. Southern California and Detroit are where most people think it’s at but there’s been a bit of a thing going on down in the Lone Star state for the past 10 years or so and Austin is the epicentre.

Maybe it’s something to do with the Texan capital’s vibrant music scene and the artistic ripples that flow from it, or maybe it’s the Kontinentals Car Club and its annual Lonestar Rod & Kustom Round Up. Whatever it is, we like it. 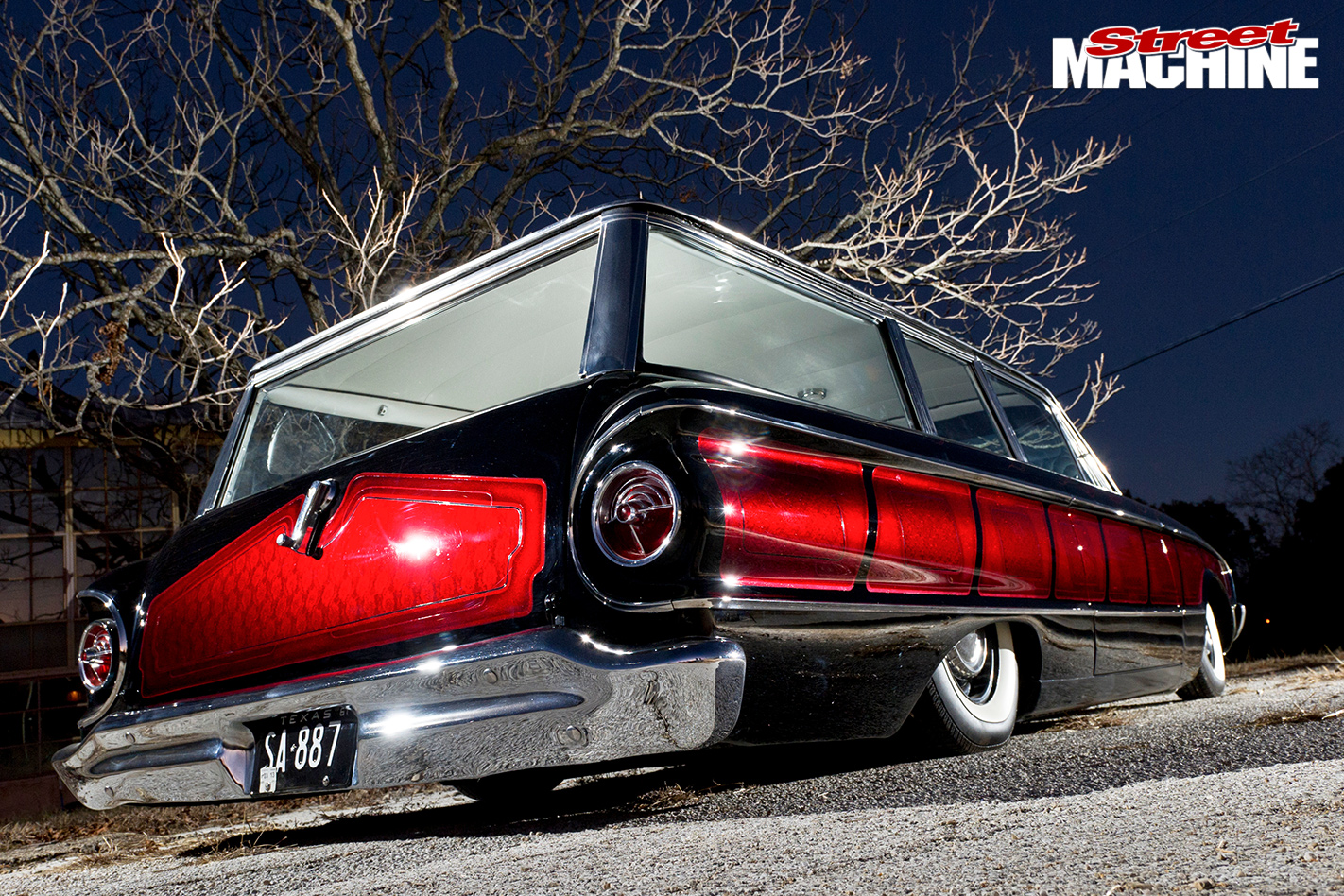 This Falcon is from further south, a nice place in the Texas hill country called Center Point that’s home to Boerne (pron. Bernie) Stage Kustoms and its owner, Chris Shuler. The car’s been a work in progress for a decade or so but most of that time it’s been on the road as Chris’s regular driver.

“It started life as a 170 straight six and I drove the car around with that for a couple of years before getting the drivetrain for an XR-7 ’69 Cougar that a customer had given up on. I pulled in a perfectly good running Falcon, swapped the motor and tranny out and then had a list of other issues like suspension and handling problems.” 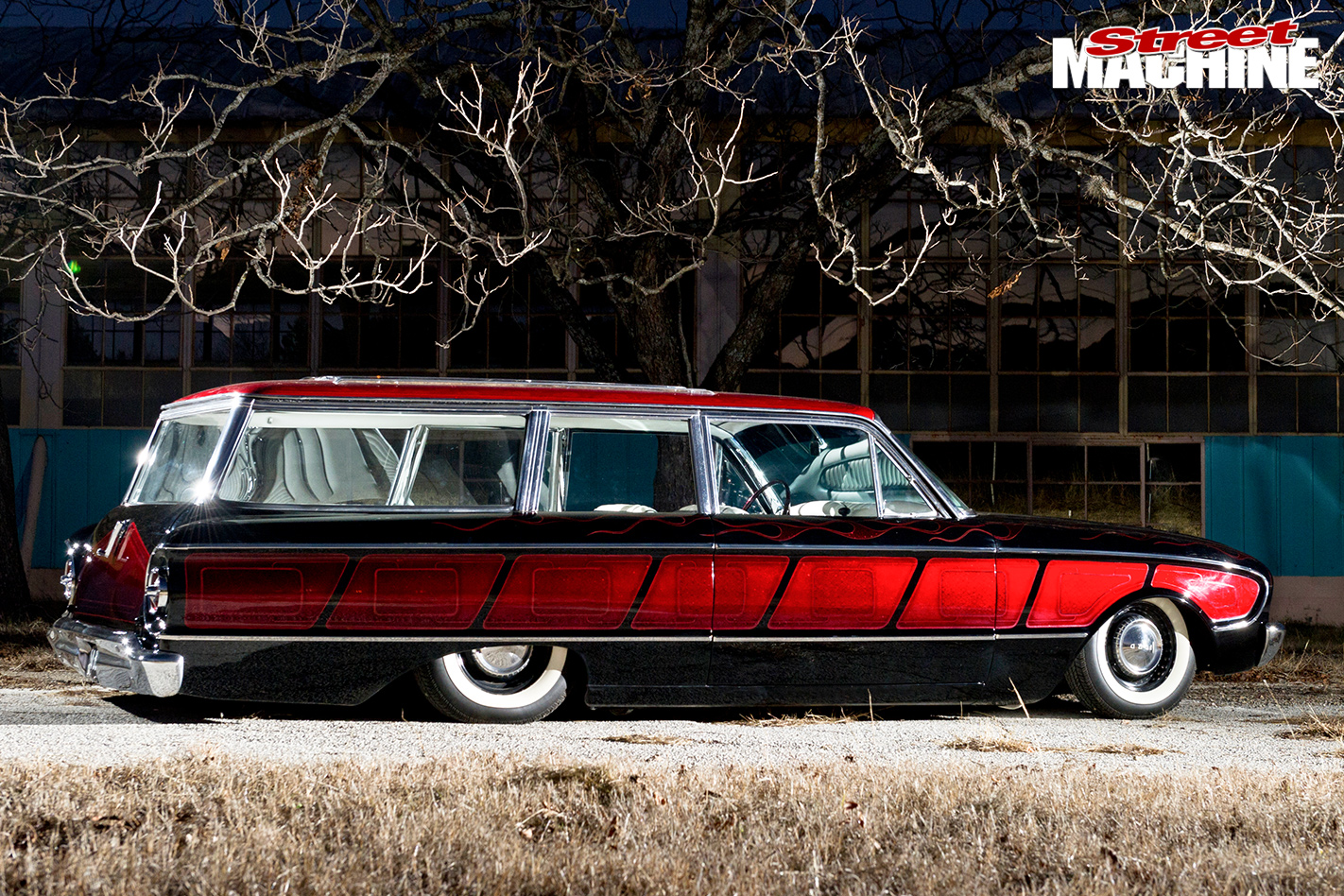 That’s not surprising when you take out an asthmatic six and replace it with a warm V8 sporting twice as many cubes. Chris isn’t sure of the specs but the 351 Windsor runs mid-13s.

We know what you’re thinking — ‘Crazy Yank is still running drum brakes’ — but there’s method in his madness. For discs you need to run 14in wheels but Chris likes his customs low. As in rail-scrapingly low. See? It makes perfect sense.

As we said, he even kept the Falcon running for most of the build. “We never let it sit too long and drove it every step of the way. Three years ago the guys were on me to paint the car with some heavy flake, so we did the roof with flake fingerprinting and lace work but we couldn’t stop there. After taking it to the Round Up that year we started ripping into the car for its current incarnation.” 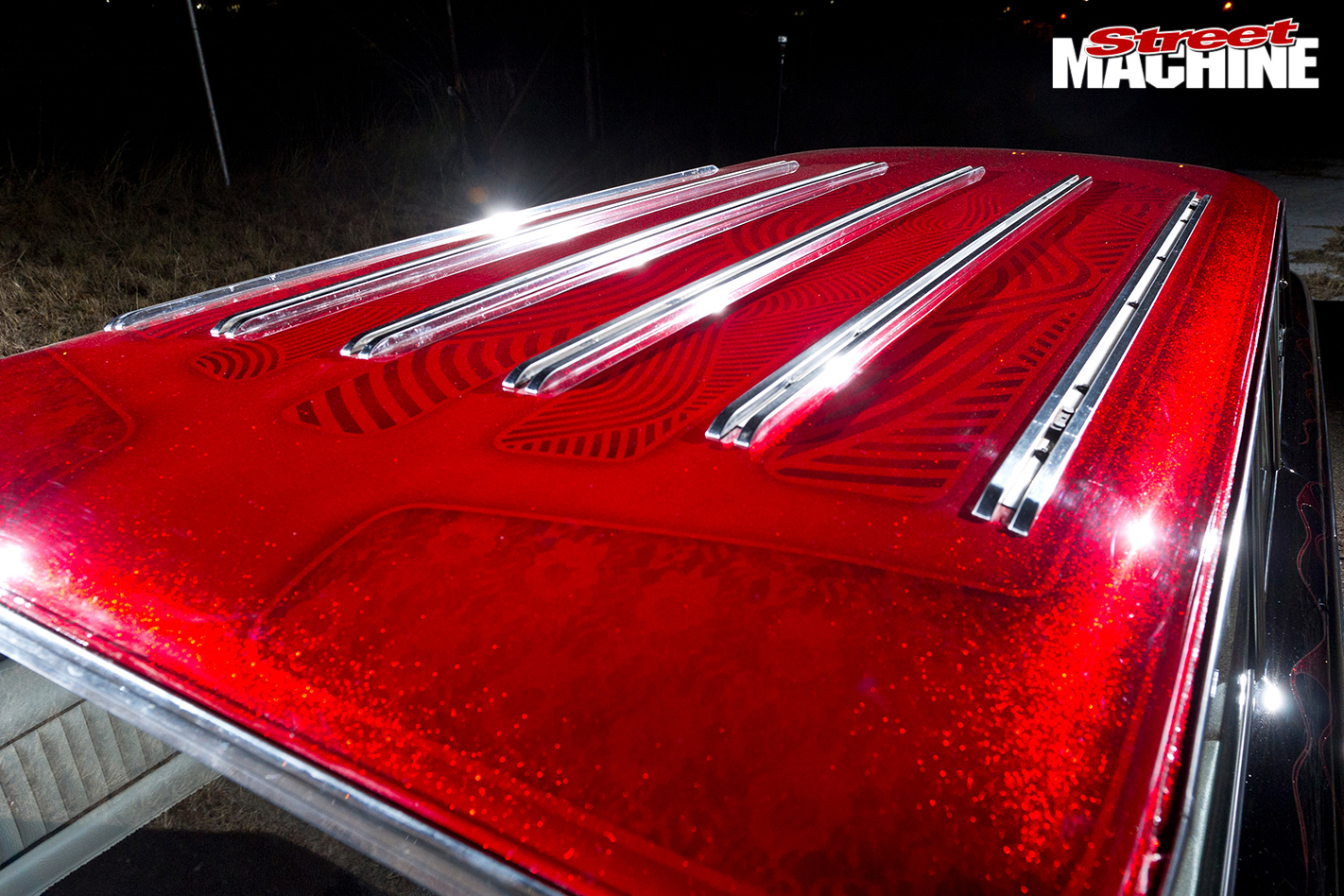 While working on the paint, he realised the car needed an outstanding interior, so he called on Vernon ‘The King’ McKean to stitch up a padded dash and hood lining.

“He had the car for eight months and ‘a couple of pieces’ turned into a full-on custom interior. Trent and I were so honoured to have this legend not only do the car but also build a friendship with us. We got the car back and knew we really had to raise the bar to match what he’d done.”

Trent is Trent Hensley, Chris’s workmate who helped design the paint scheme and spray it on. Without any crazy body mods, it was down to that ink to make the car stand out. 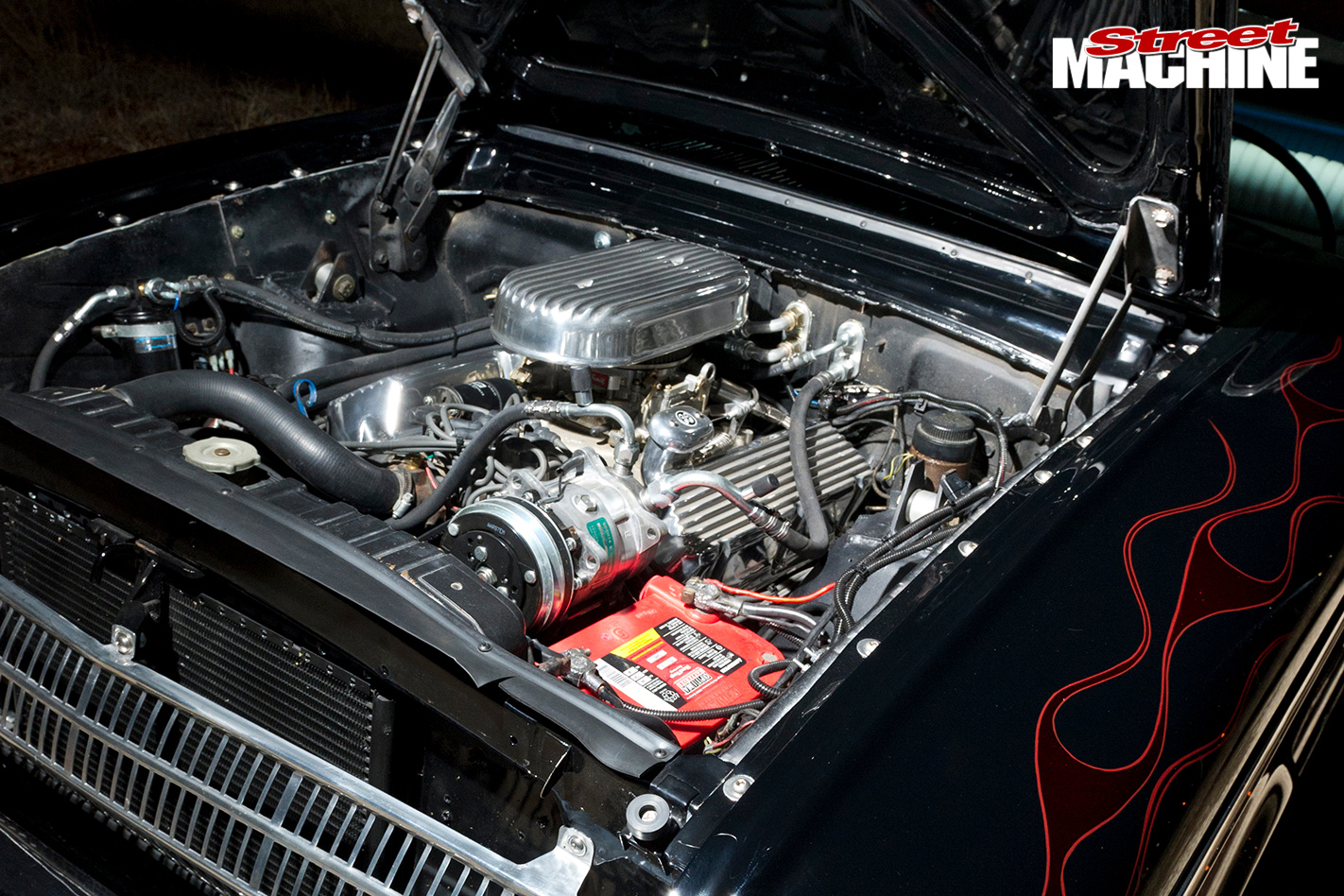 “We sprayed it in a week — then came the clearing, sanding and buffing. We took the car back to Vernon and he was blown away. He put everything back together just in time to hit the Showcase Of Kustoms in Long Beach, California. We hauled the car out there and Vernon came with us. We had a great time hanging out.”

The paint and trim must have impressed the Showcase judges, as the car won Best Station Wagon, but amazingly, the lace panels on the sides, flames down the bonnet, lace and fingerprinting on the roof and the pinstriping to top it all off didn’t feature in the original plan.

“I was going to flame the whole car but then I saw the ’59 Ranch Wagon that Darryl Hollenbeck painted.” Featured in Rod & Custom, Oct ’10, the panel, paint and detail on Hollenbeck’s car is an understandable source of inspiration. 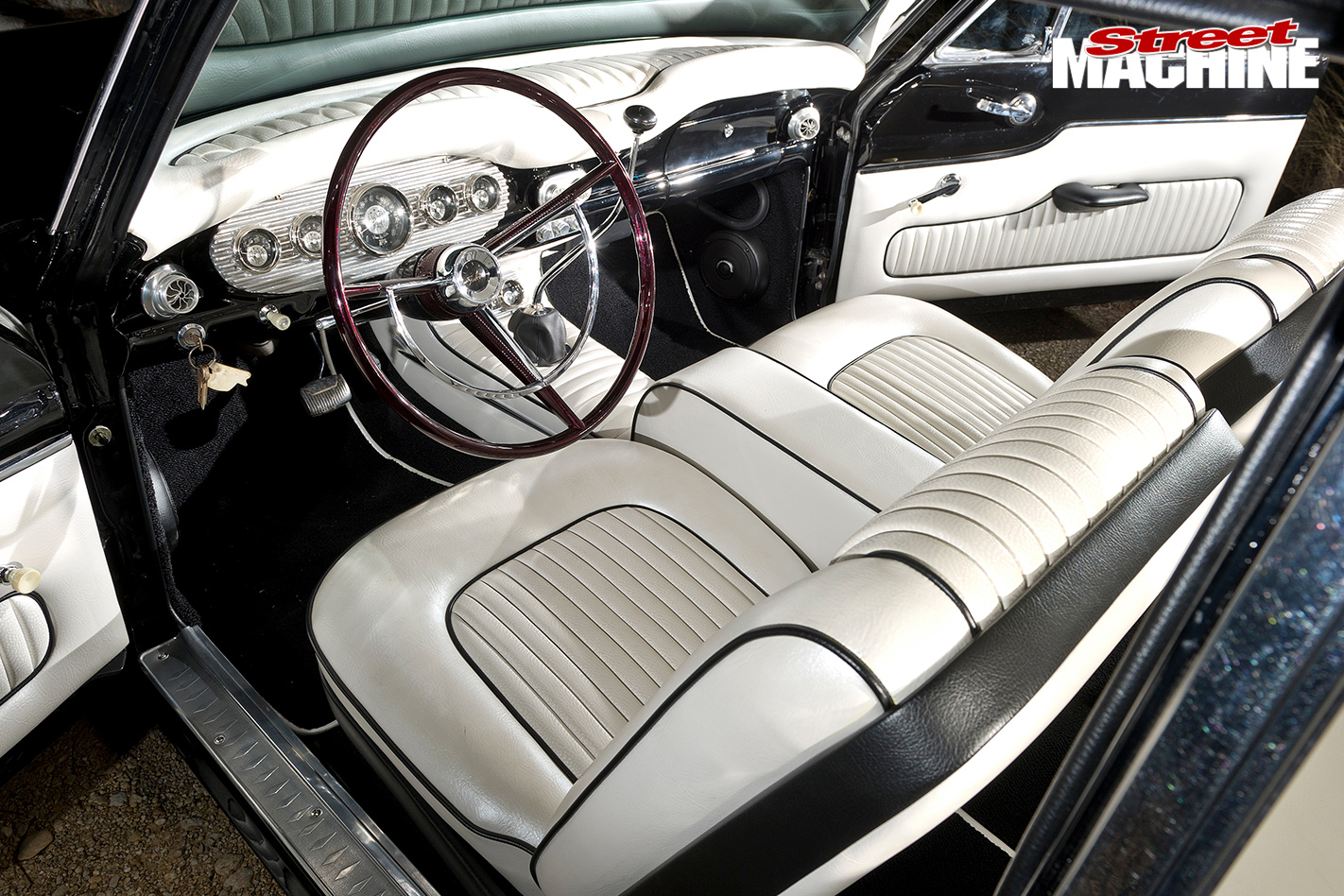 The combination of DuPont Jet Black with House Of Kolor Kandy Apple Red that Chris and Trent chose is certainly eye-catching but how they laid out those designs without getting completely confused is beyond me. Which is probably why I’m writing about it and they’re doing it!

Vernon’s trim job really is something else. Instead of taking the easy way out with a couple of Falcon or T-Bird buckets, he told Chris to get another bench seat so he could make up custom buckets. With tuck and roll covering everything from the tailgate to the padded dash, Chris’ll have to take it easy carting car parts around now. 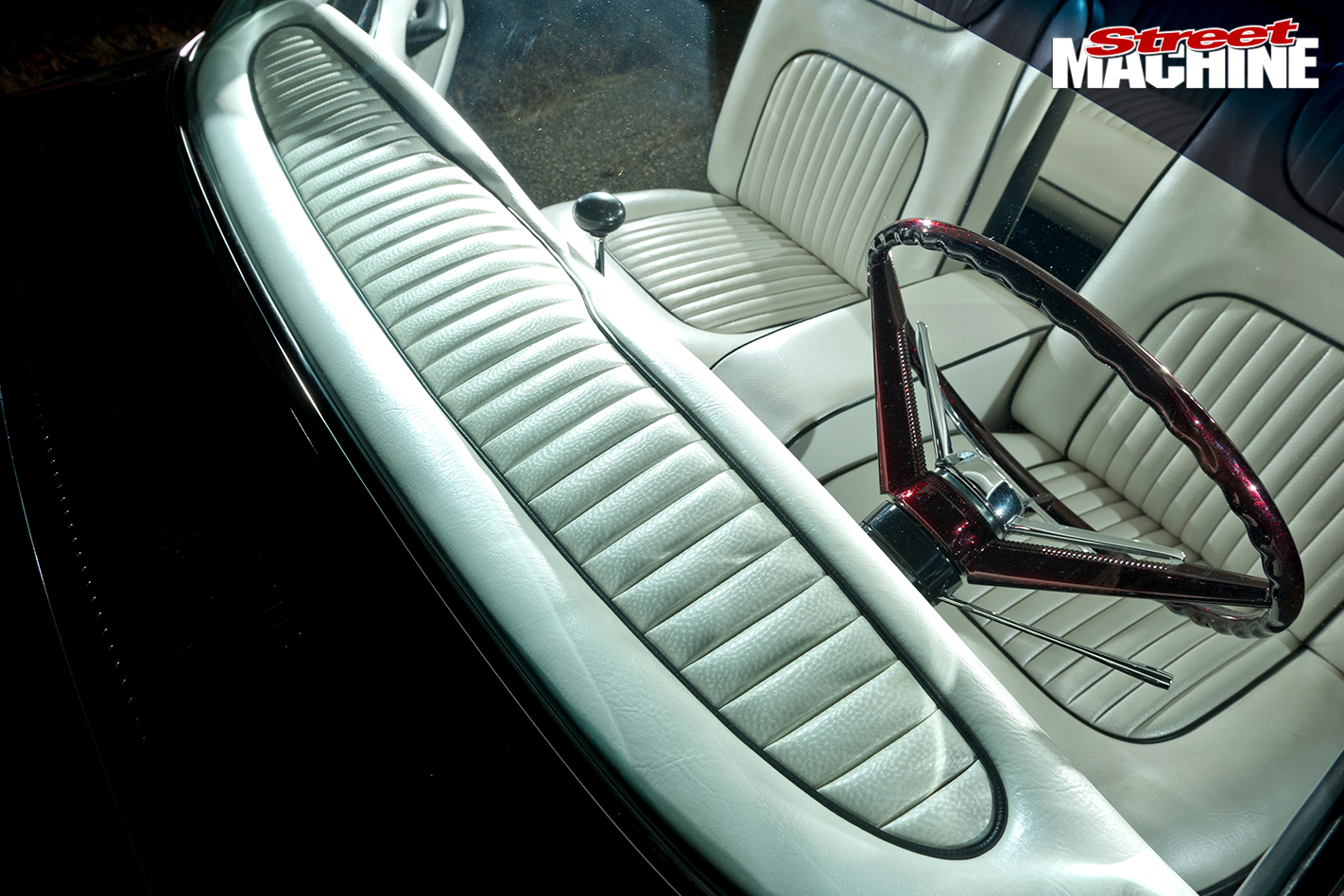 The hot rod-inspired dashboard is something else. A bunch of round gauges sunk into the dash of a 60s car can be a style disaster but the combination of the finned insert and the custom gauges from Classic Instruments really works. Perhaps it’s to do with the fact that the insert is a similar shape to the stock Falcon gauge cluster and works with the dash.

And that pretty much sums up this car — it just works, in style and functionality.