Chevy was number one in the Super Stock war of 1962, we take a look back at the car that won it

Chevy was number one in the Super Stock war of 1962, we take a look back at the car that won it

WHERE were you in ’62? Well – assuming you were even born then – you should have been down at the local dealer waiting for your brand new Chevrolet to arrive. Being a bit of a petrolhead and a budding drag racer, you ticked all the right boxes when you ordered the car. 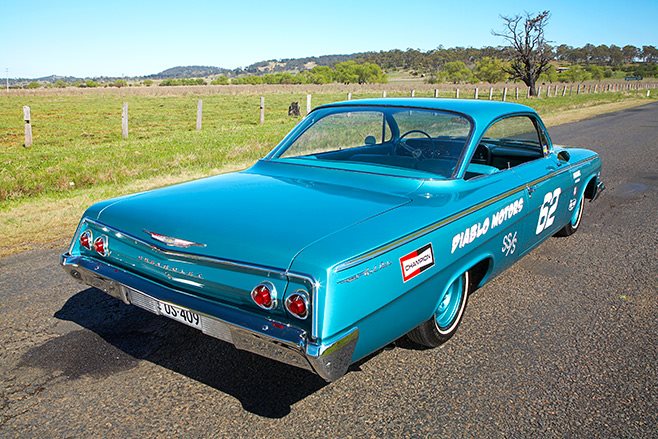 Dual-quad? Yep. Four-speed? Sounds good. That was on top of the 409 cubes of W-motor you’d already selected. Making sure it all hooked up was a 4.11-equipped Posi-traction rear end. Oh yeah! I can feel a song coming on!

Of course, you also wanted to look good when you were tearing up the strip so you opted for the Bel Air Sport Coupe, more often referred to as the bubbletop due to its slender profile and large glass area. The two-door Biscayne sedan was probably a little lighter but there wasn’t much in it and the bubbletop killed it in the looks department. After all, it’s not just about how fast you go, but how good you look doing it. 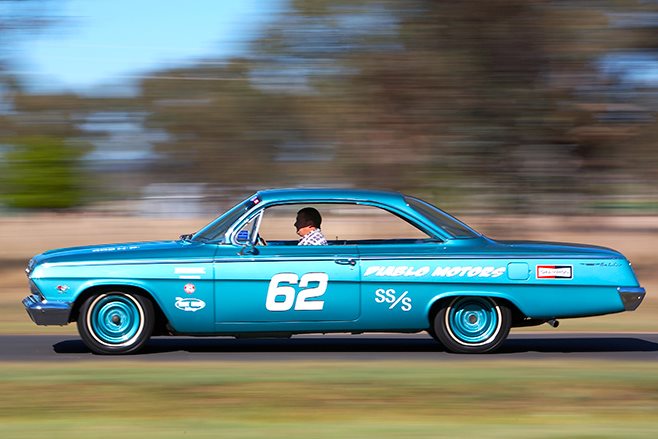 Developed primarily for drag racing, the ’62 Chevys gained a strong following with many of the top racers of the day. Names such as ‘Dyno’ Don Nicholson, Hayden Proffitt and Tom Jacobson tore apart the competition. The new Chevys were so good they won the NHRA Winternationals (Nicholson) and the NHRA Stock Eliminator crown (Proffitt) in their debut year.

You might be wondering how fast a big old boat like this could go. How does a low 12 grab you? Yep, those 409 cubes pumped out one horsepower each. Considering how big the car is, it didn’t really weigh all that much, tipping the scales at 1578kg or 3480lb in the old money.

To help keep the weight down, not many people ticked the boxes for creature comforts, so you won’t find any radios or heaters in these cars. Much more useful for quarter-mile duties were the factory floor-shift and column-mounted tacho. Most racers opted for an aftermarket shifter, usually a Hurst, making the factory shifter – as fitted to Pete Townsend’s car here – a pretty rare commodity these days. 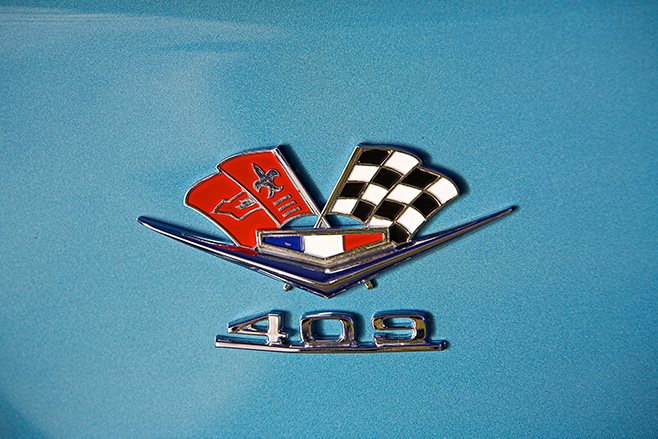 Yep, it’s that Townsend family again. Those boys seem to have a bit of a fetish for the 348-409 W-series engines but this time Pete has got the right car for the motor – although we don’t mind if he keeps putting them in hot-rod Fords!

Pete got hold of this beauty via eBay and had it brought in by Rob Thompson at American Hemi Speed Supplies. As far as he can tell, it’s a genuine 409/409hp, dual-quad, four-speed car.

“It took me about five years to find the car; they’re even getting thin on the ground in the US,” Pete tells us. 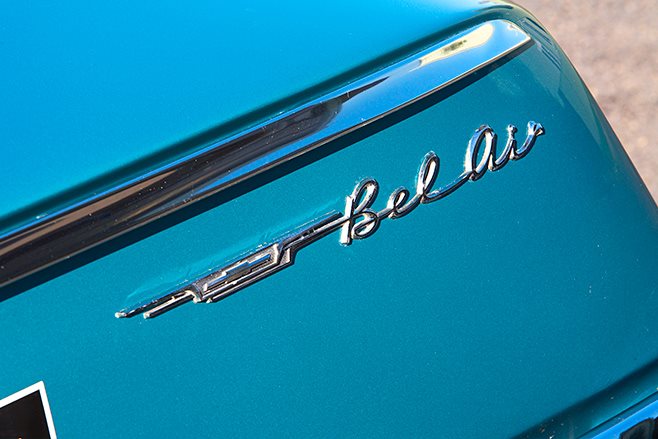 “This one was in really good original condition and all we did was recondition the engine, give it a new coat of paint and fix up the chrome.”

Pete’s a panel-beater by trade but he didn’t do this car. “We went on a bit of a holiday, so I had a couple of mates do it while we were away. Rob Aitchison did the bodywork and Dean Hamilton sprayed it.”

For once, choosing the colour was a no-brainer, simply redoing the original Twilight Blue in a Lessonel two-pack finish. All the shiny stuff was then sent to Johnny Walker Bumpers and Chrome down in Coffs Harbour and that pretty much had the outside of the car sorted. 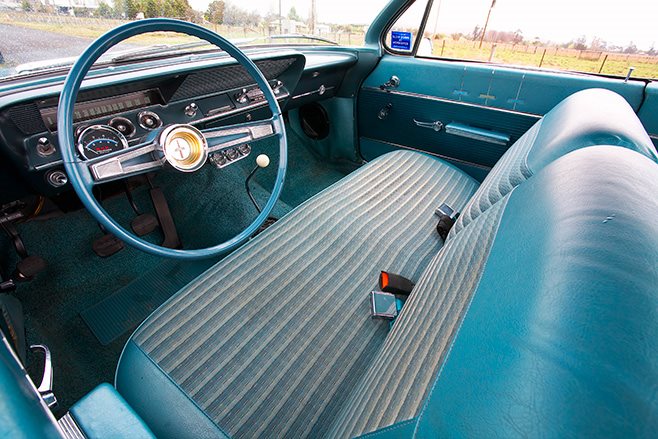 That nice flat bench seat is just fine for quarter-mile duties; the super-cool white ball shifter is another factory option

Inside it’s just as it left the factory, as in unrestored. Pretty amazing after 45 years! Pete believes he’s only the third owner, so that probably explains why the car was in such good nick. The best bit about it all was that he didn’t have to go looking for anything – it was all there. 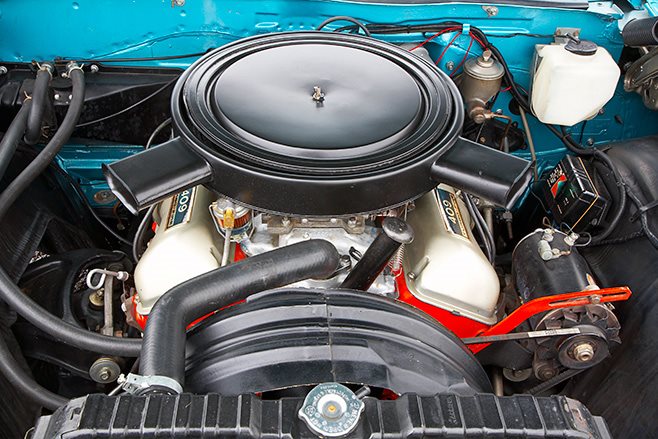 “We were really careful when we pulled it apart because a lot of bits are hard to get,” he says.

Under the bonnet it’s basically rebuilt to stock spec but when you consider what you got from the factory, there’s not much more you’d do to it! There aren’t even any dress-up bits on the engine; the rocker covers are painted the factory silver/gold, the block is good ol’ Chevy orange and that big-arse dual-snorkel air cleaner doesn’t have an ounce of chrome on it. And it looks mint! 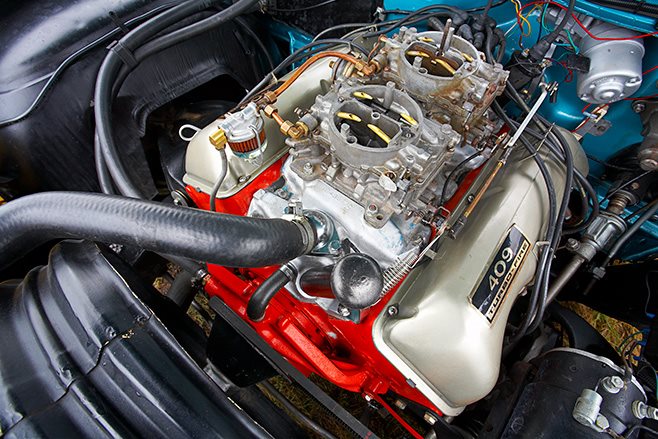 Nope, Pete Townsend hasn’t hotted up his 409 with a dual-quad intake and twin AFB Carters. That’s how it left the factory

To add some racing flavour, Pete thought he’d slap on a bit of signage. Based on the decals that you get in model kits, Pete modified it for Aussie flavour, adding Diablo Motors and his own Hot Rod Shop logos. The rest is just like you put on your plastic model kits when you were kid.

There aren’t too many of these around, even in the USA, and over here Pete believes there might only be a couple. So while you might have seen a few ’62 Chevys in your time – even a few Impalas – if you get the chance to see this car up close, have a good look because they didn’t get much better back in ’62. 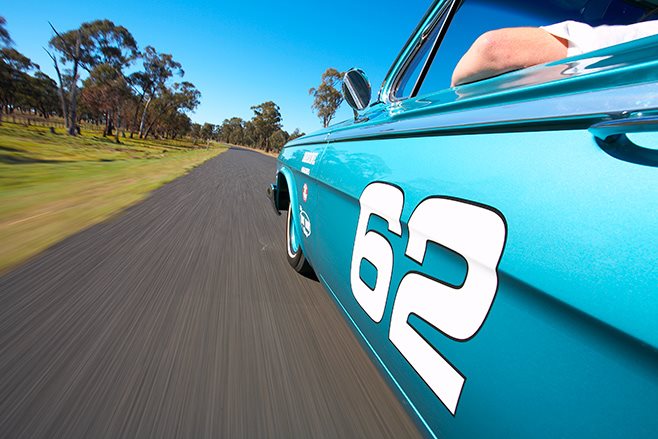 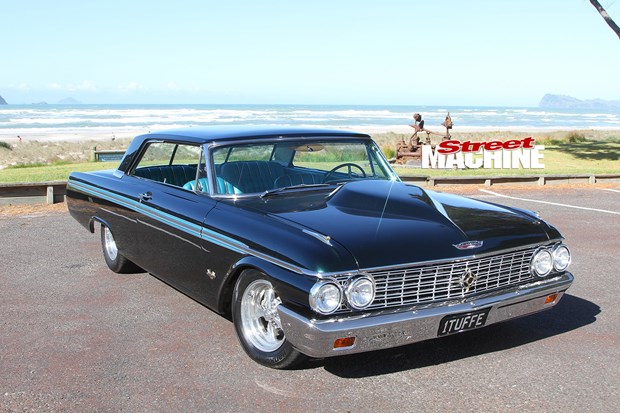 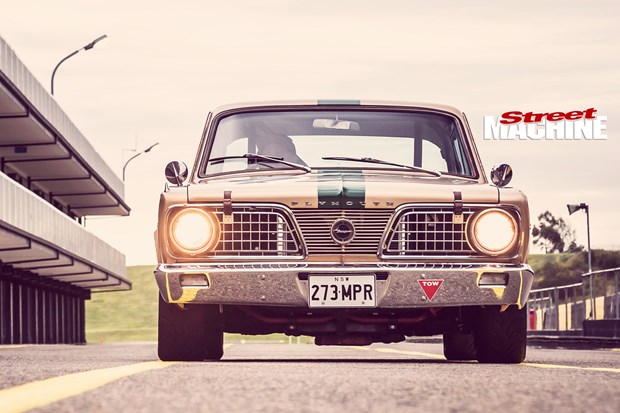 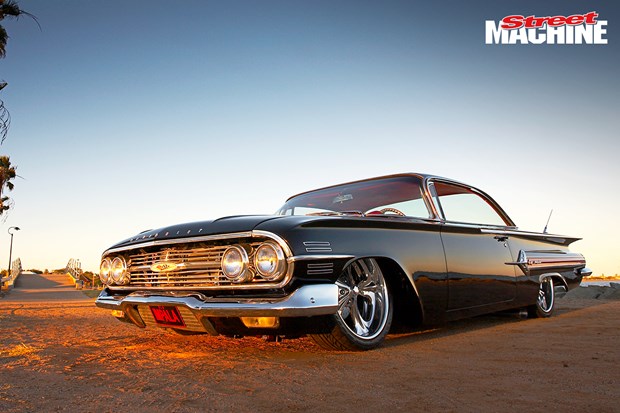