Kris Matthews's cool Ford Falcon XL sedan delivery has the looks, the power and the set-up for any occasion

Kris Matthews's cool Ford Falcon XL sedan delivery has the looks, the power and the set-up for any occasion

AS I write this, the wife and daughter are glued to the telly watching Australia’s Got Talent and I have to agree with that title; Australia has got talent. But it’s not some old biddy banging away with her spoons or a bloke who can chop wood better than a woodchuck. It’s in the sheds of Aussies all over our wide brown land, and the evidence is here, in Kris Matthews’s ’62 XL sedan delivery. 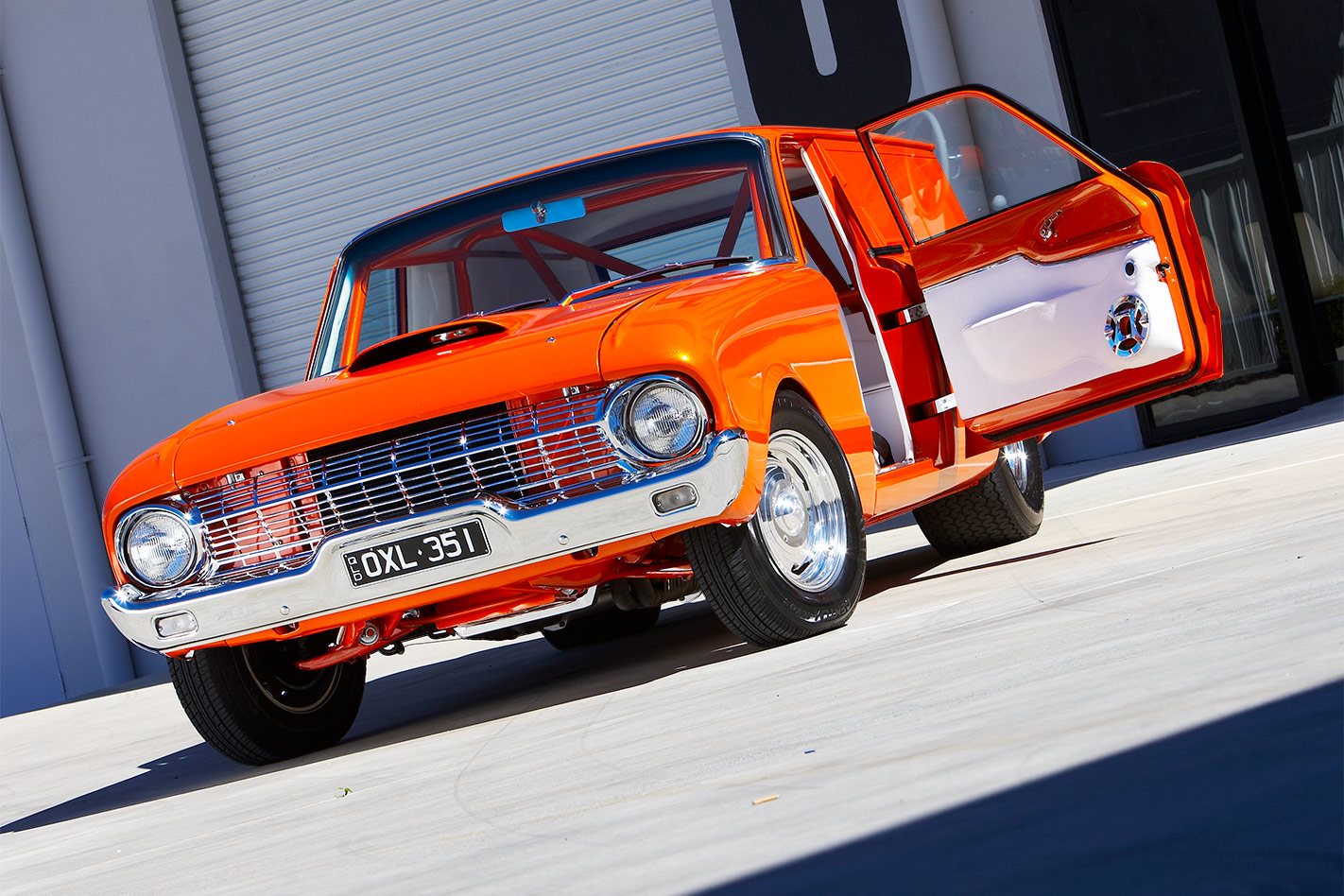 You want to see talent? Then check this bad boy out because it’s got more features than you can shake a stick at, and most of it has been built by the owner himself. It hasn’t been easy but then again, the best things never are.

As Kris says: “It makes the four and a half years of having no life almost worth it.”

Kris is a Ford man, there’s no doubt about that. He’s had a string of Blue Ovals over the years but the one he was really partial to was an XP delivery that he regretted selling. When an opportunity came along to make up for that, he didn’t hang about. 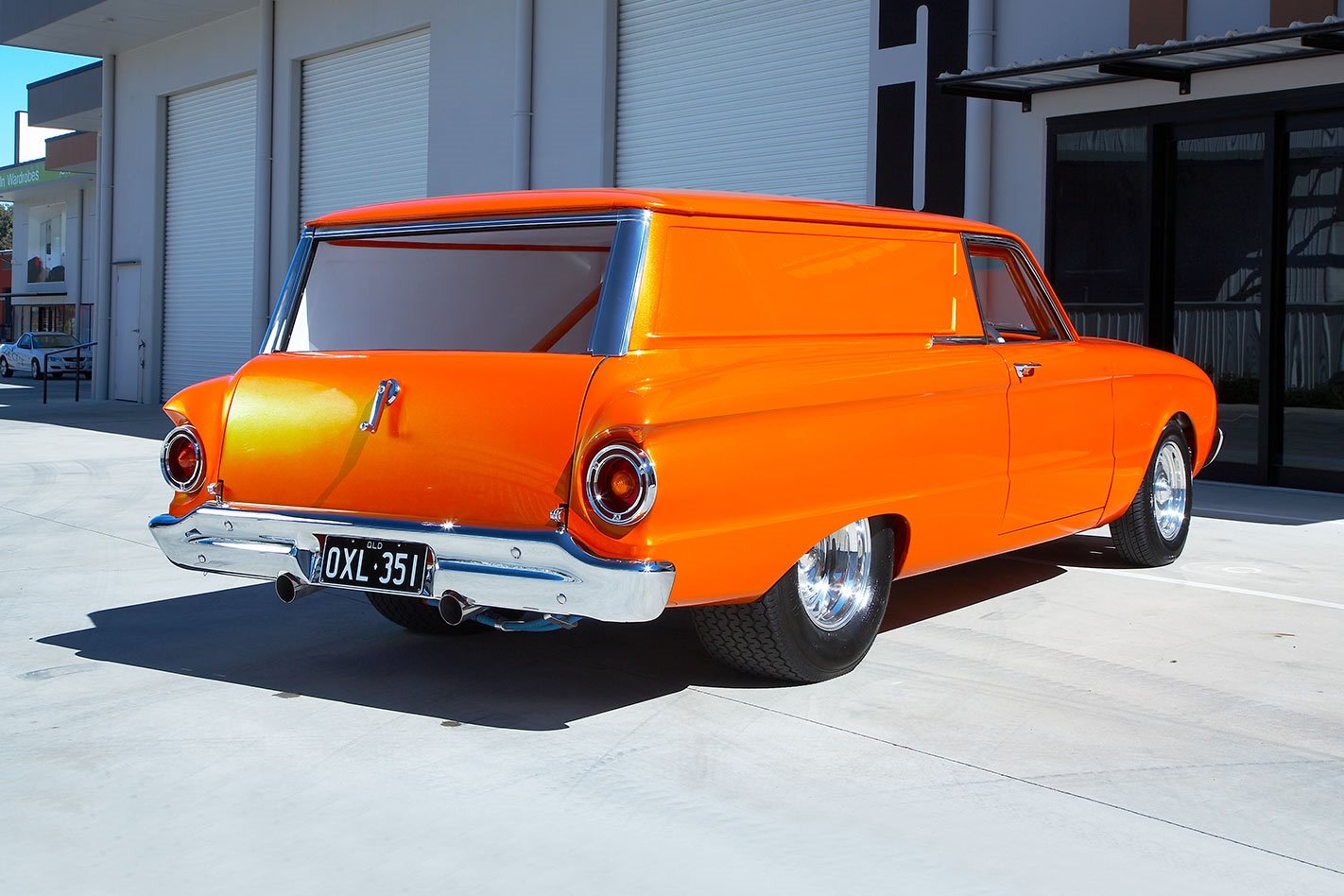 “A customer came into work one day and we got to talking about cars. He said he had an old van that had been parked in his shed for years. I took one look and brought it home with me.”

Someone had jammed a 200ci six between the XL’s shock towers and it was mated to a BorgWarner auto that had required some floorpan mods to fit.

“The tunnel had been hacked to fit the auto — it look like someone had riveted a tin sign to the floor,” Kris says. 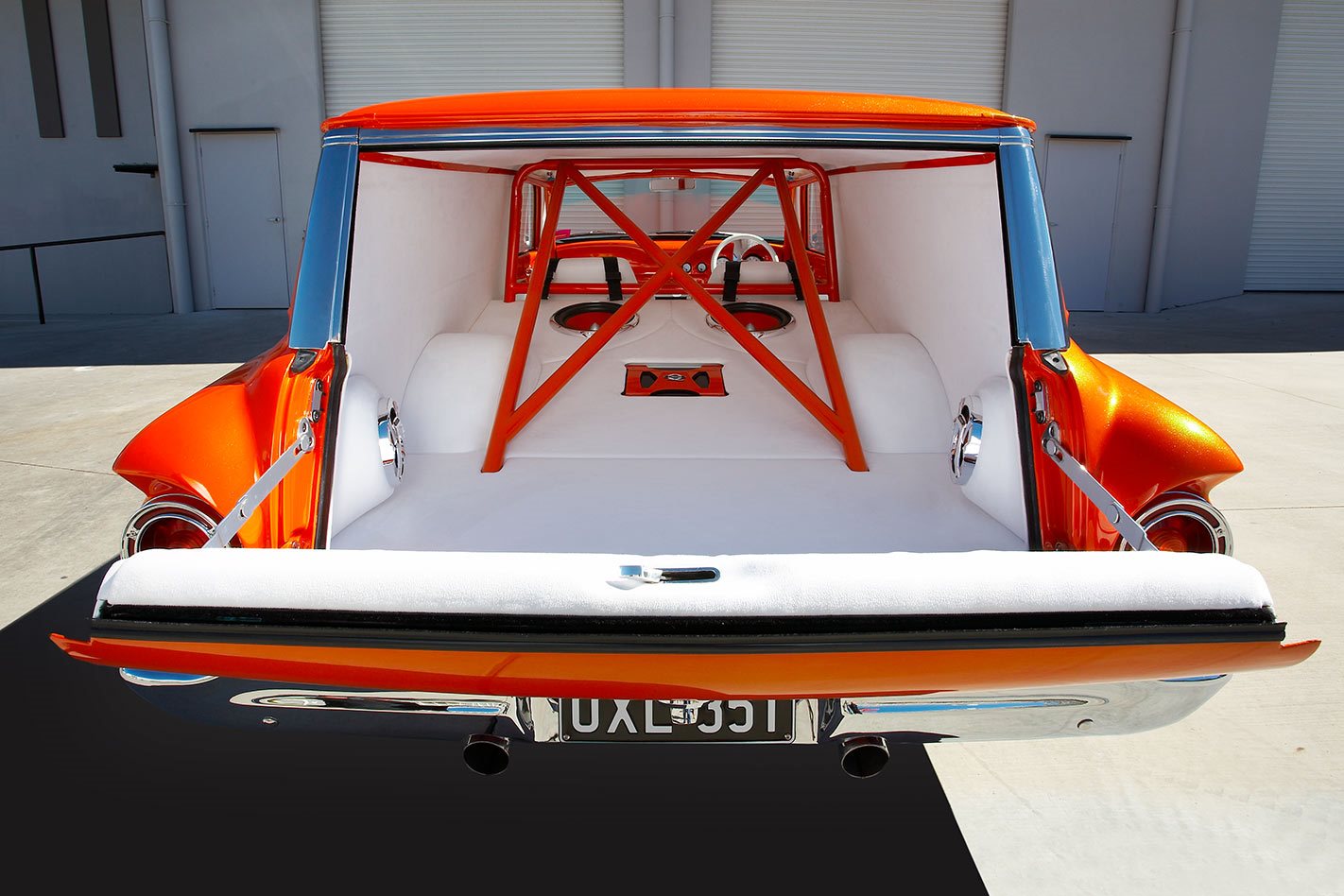 So he stripped the beast, threw the shell on a rotisserie and had it blasted to reveal all its sins. Apparently the car had been in a barn for five or six years so the body wasn’t too bad when it came to the dreaded tinworm but of course there were still some areas to patch.

But this story isn’t about the rust the old girl had, nor the number of horses that the Dart-headed 351 Windsor puts out. It’s all about the tricks Kris has built into this cool ride. 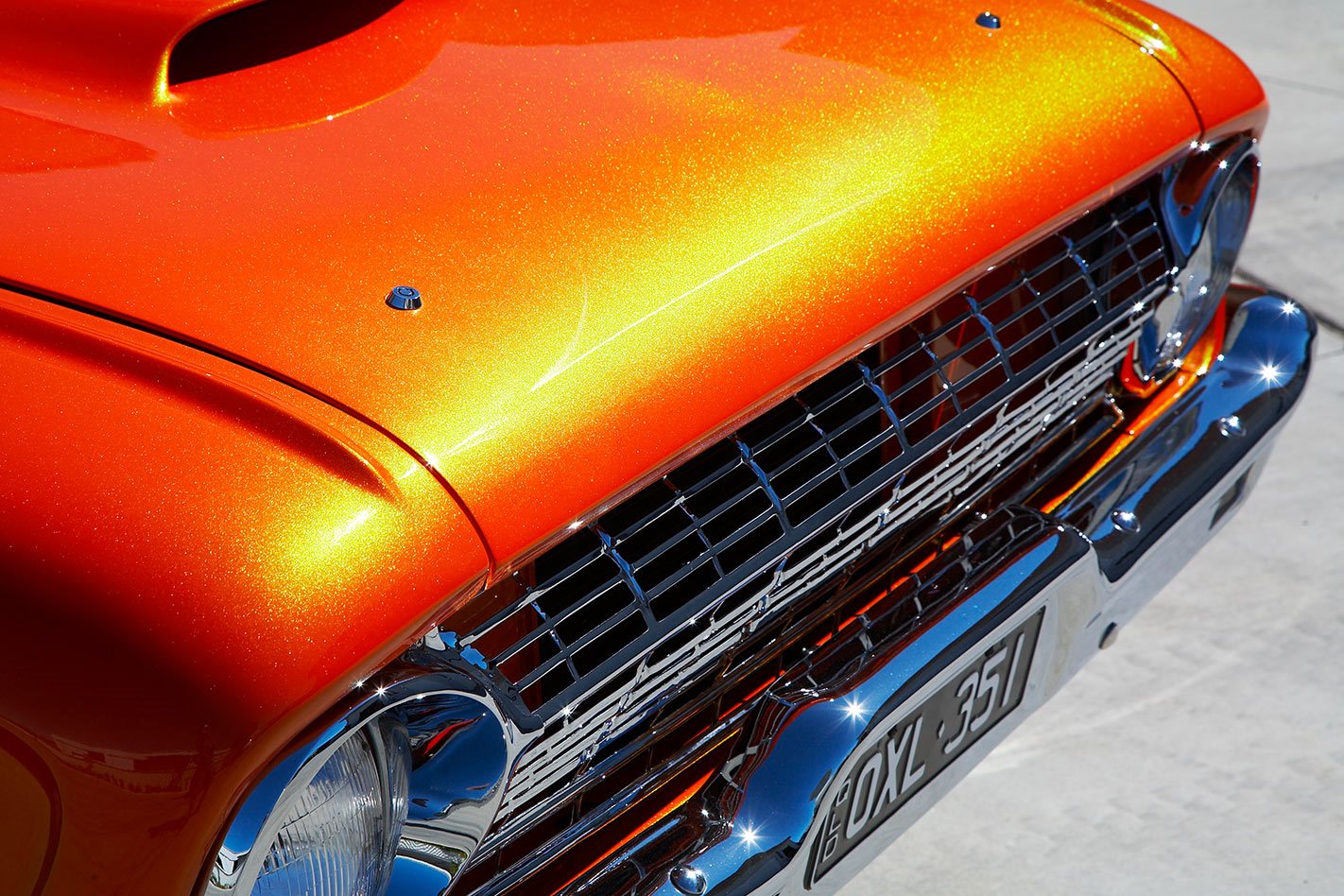 The PPG hue pops beautifully in bright sunlight thanks to a superb paint job by Classic Dent Repairs. Up front, there’s a custom fibreglass bonnet which Kris created by grafting three bonnets together to get the look he wanted. From that, a mould was produced and this is the finished product. If you want one for your early Falcon then Kris is happy to pop one out — for a price.

At the back, a custom 55-litre tank sits under the rear floor, instead of in the factory location behind the passenger seat, and the filler is hidden behind a hinged tail-light. Working forward, you’ll no doubt notice the 12.5in-wide Mickey Thompsons hanging from either end of the narrowed nine-inch. Of course, the wheel tubs had to be widened to accept the 10in-wide Center Line billets. Twin three-inch pipes poke out through hemispherical recesses in the rear bumper. 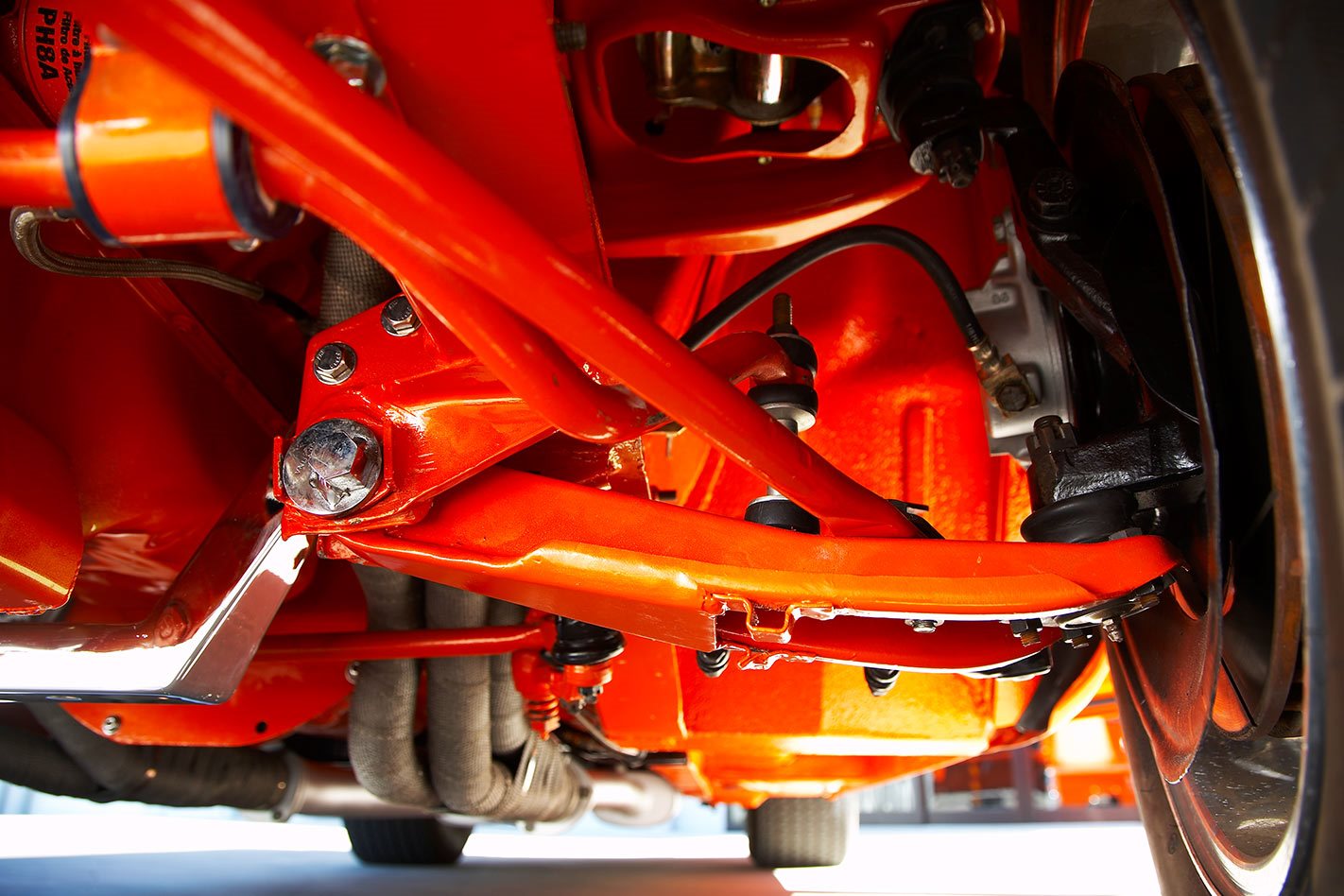 Not only is the van detailed but Kris has also strengthened the front with a custom crossmember. He boxed the lower control arms as well

Kris orchestrates the music from that heavy-hitting 351 by working the Hurst shifter that’s attached to a Ford top loader ’box. He knows it’s an unusual choice for a car like this but he doesn’t care about that.

“I’ve always been a manual guy — I like my gear-changes — but if it breaks I’ll probably put an auto in it,” he admits. 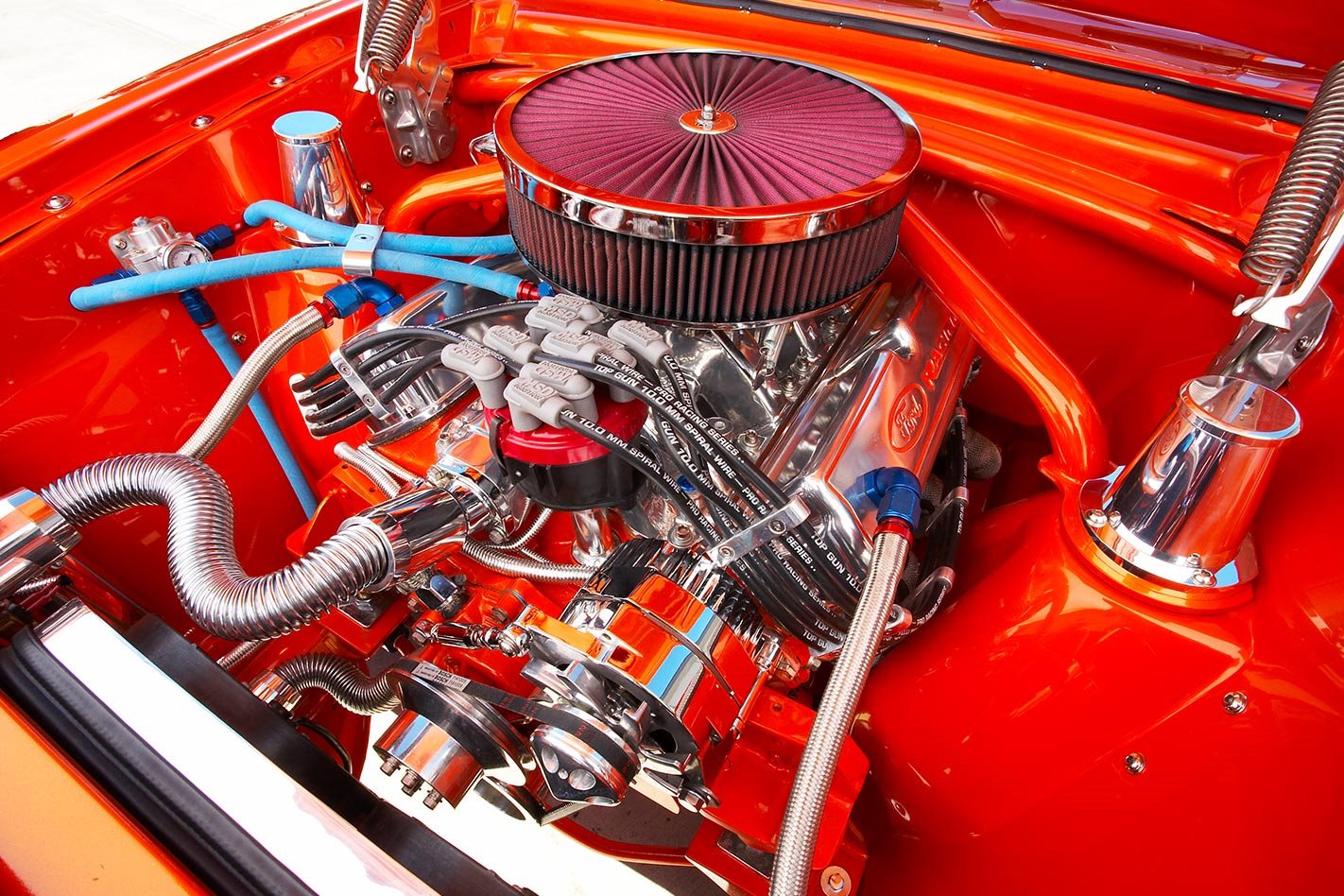 Kris is the in-house mechanic for Classic Ridz and his stout 351 has Dart Senior heads, 750 Holley and an RPM Airgap intake. The beast is held in a magnesium engine cradle as used in racing boats, which gave more room for the owner-built headers

Since its debut at the Brisbane Hot Rod Show, where the bright orange machine took Top Van/Wagon, Top Custom Paint and a place in the Top 10, Kris is happy to just cruise in the van for the time being. But this ride isn’t destined to be a mere show pony.

“I want to get it on the track and see what it does,” he says. It should pull some decent numbers — the engine came out of his old XY ute which used to run 12.0s on the quarter. 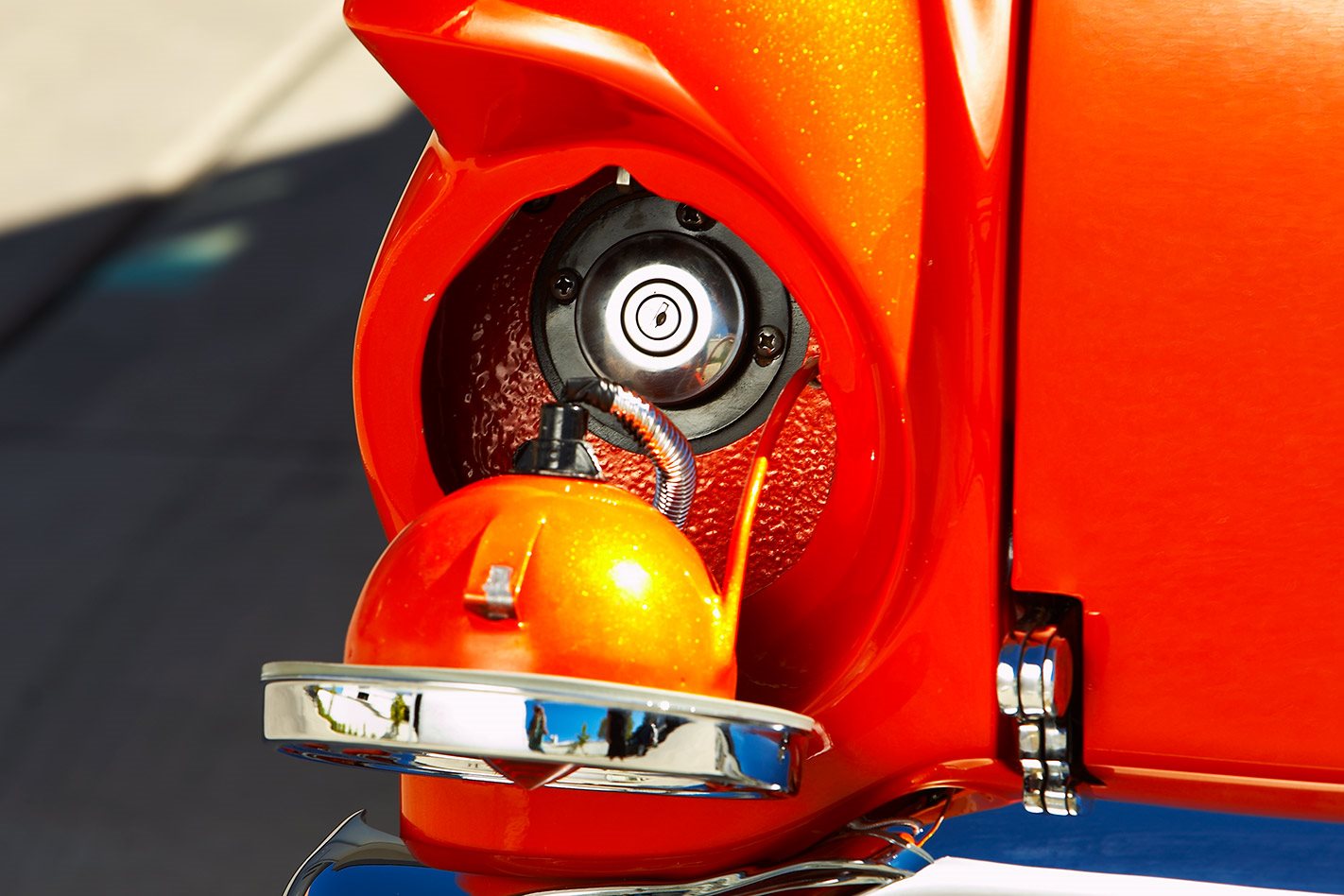 Talking of fast times at the track, how about the extensive rollcage? Sure we’ve seen plenty of ’cages before but this one has more bars than a jungle gym and they extend into the engine bay to replace the original tower braces. Kris made the tower braces removable but it’s not the ’cage that people notice first — it’s what it prompted him to do next that surprises most. Jaws drop when Kris pulls up and hops out.

Due to the location of the front rollcage uprights, Kris wasn’t able to adjust the door hinges because the bolts sit directly behind the tubing. To solve it, he made the front doors open the other way! Which makes it sound a lot easier than it was. 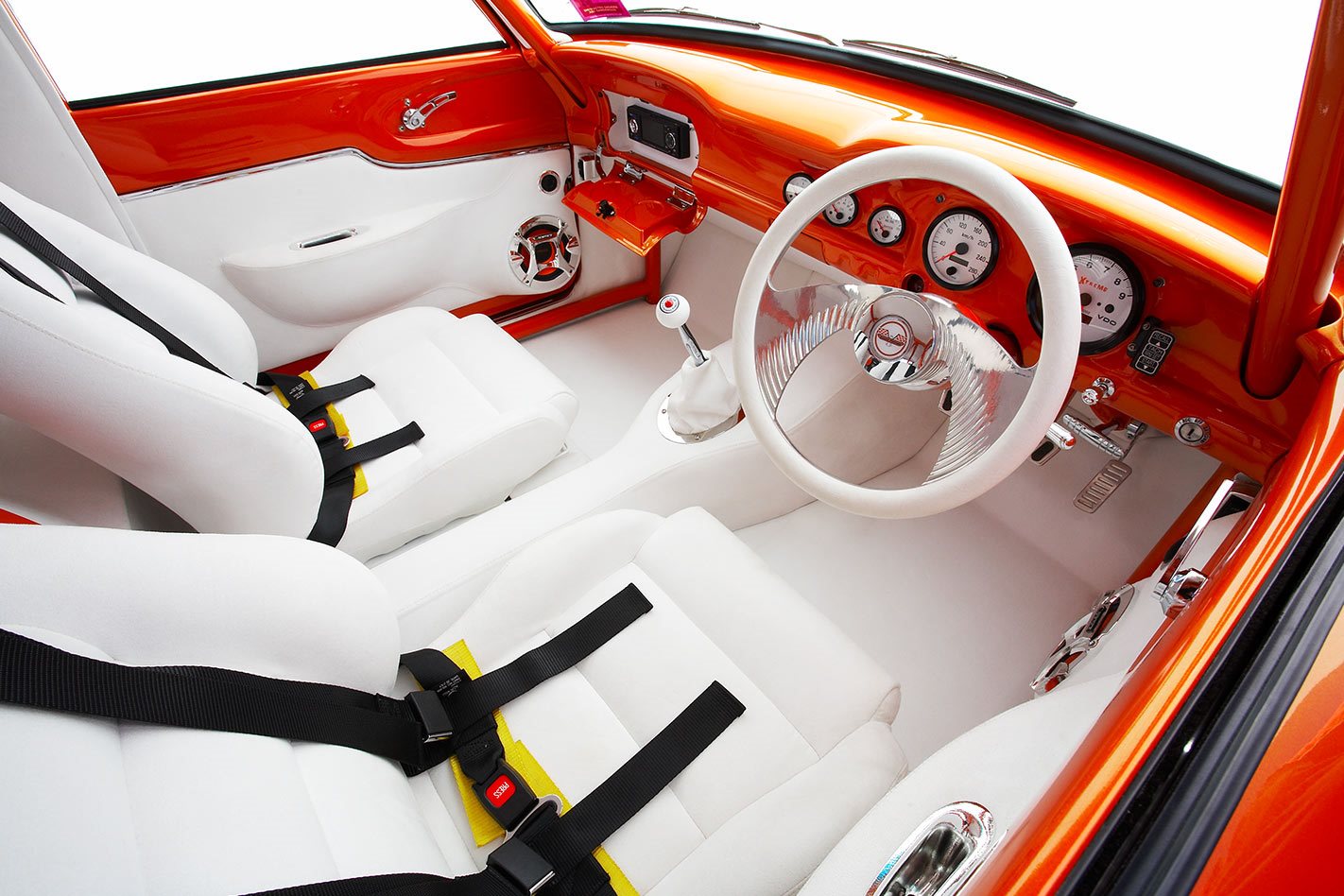 “It’s funny watching people’s faces when you push the button and the door opens the other way,” Kris says. “I left the door handles at the back and made them electric.”

Micro-switches behind the door buttons activate solenoids that control the repositioned door locks. The inner door handles are set up the same way. Then there are the scuff plates that were machined from billet, and the power-window switches in billet fittings just under the dash. Or maybe you like the stereo hidden in the glovebox. The van’s so full of little custom pieces, you can tell Kris hasn’t been sitting on his bum for the past four or five years. 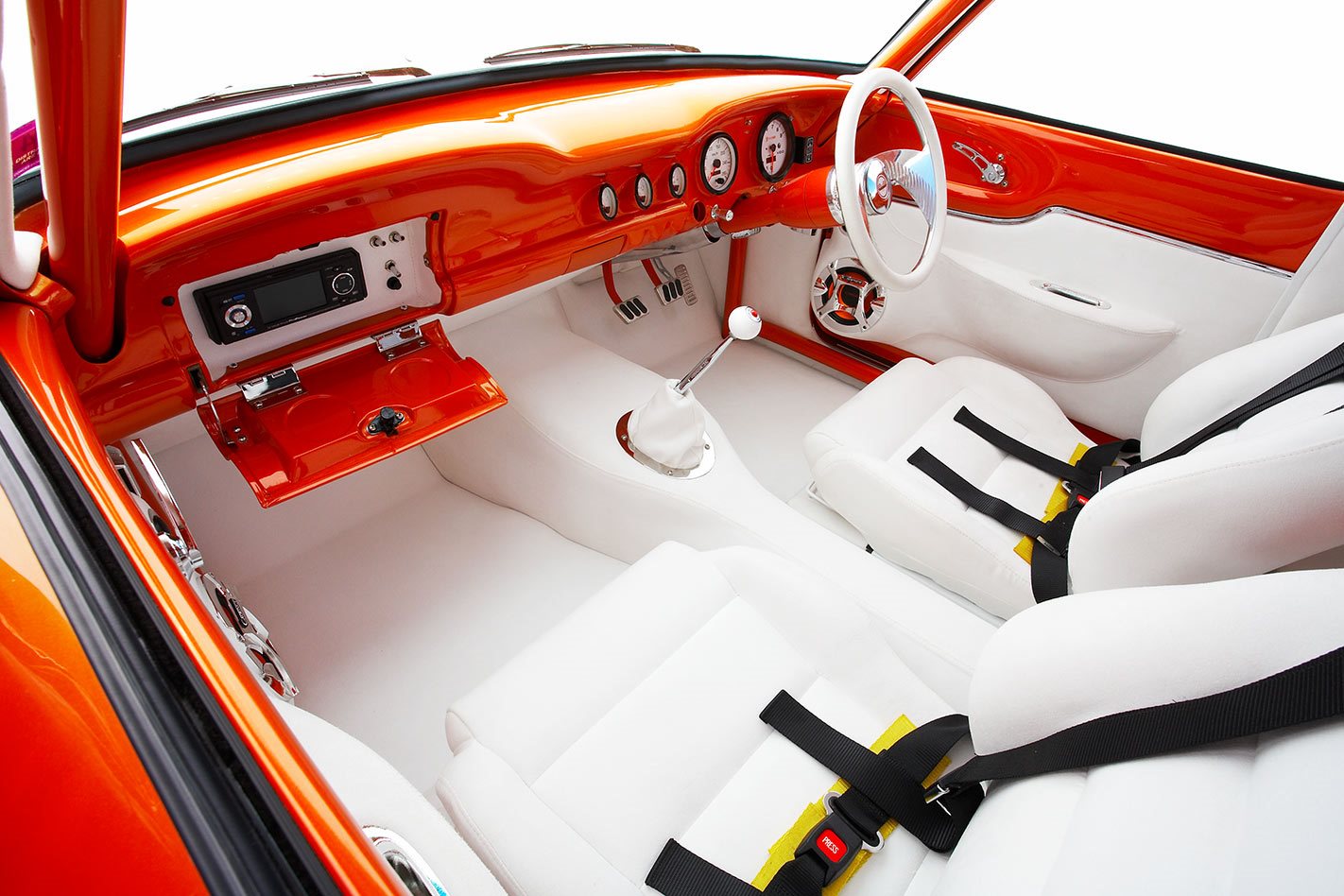 To be different, Kris went for white-faced VDO Xtreme gauges in the heavily customised dash. He filled and smoothed the speaker vent that usually dominates early Falcon dashboards

Honda Integra seats were selected to replace the original bench. He picked them for their shape and the lack of exterior buttons and levers, then had them dressed in white suede. Similar suede covers almost everything inside the van, thanks to Outrage Motor Trimming, and it’s an excellent contrast with the PPG
O-so Orange exterior. 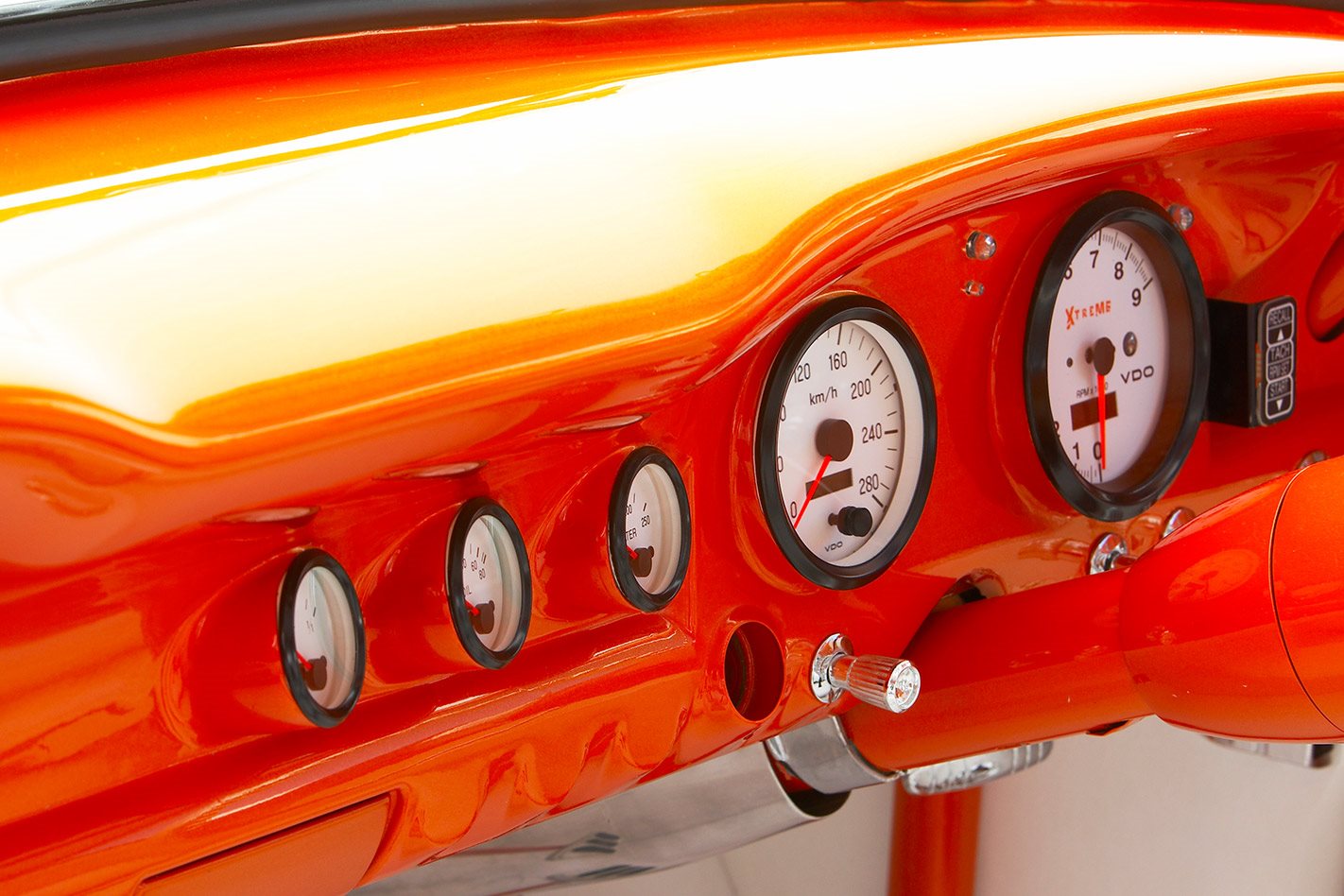 “Everyone said I was mad for doing that,” Kris says, referring to the white interior. “But I had it pictured in my head like that — I couldn’t imagine it any other way now.”