A young builder combines classic style and performance in a rare XK wagon.

This article was originally published in the August 2007 issue of Street Machine.

There's a lot to like about Cameron Harris’s XK wagon. It’s an impressive piece of work inside and out. But it has one standout quality that hits you the instant you see it: from roof rails to the treads, it oozes style.

Nailing style is to capture the stuff that doesn’t come in cans, is not available off the shelf, and can’t be bought with a credit card. And this Falcon’s tank is brimming with it. 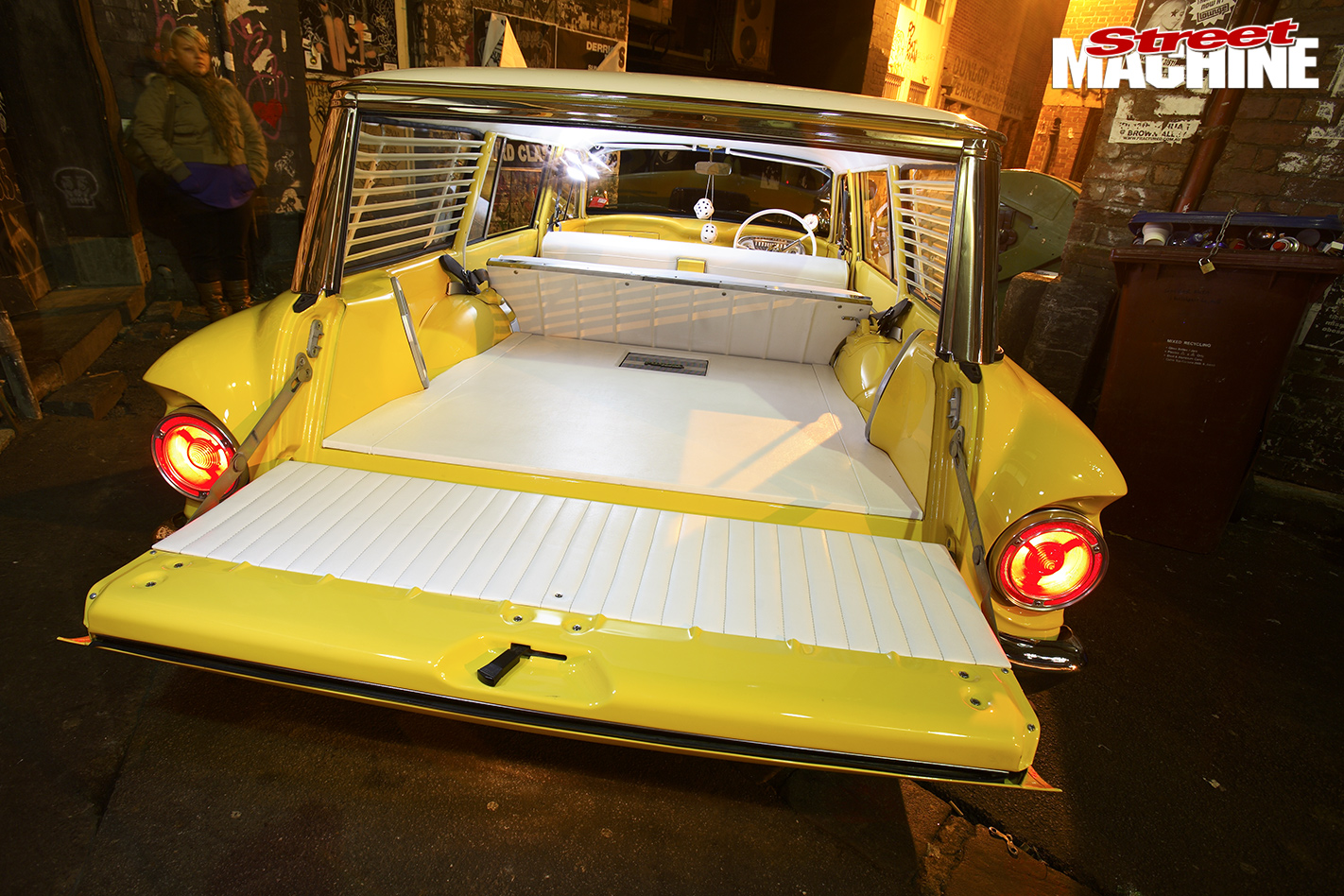 If you believe car crafting is art, then some crafters, such as Cameron, have got a knack for taste and style.

Maybe it’s his upbringing and environment. Growing up in a family with a long history with hot rodding – and in Ford Australia’s heartland of Geelong, Victoria, no less – must’ve deeply rooted influences and nurtured his keen eye for cool. And because of this, you might reckon that the 25-year-old found arriving at his frosty early-girl Falcon vision a quick, simple and effortless process. Far from it.

Rewind a bit. As a 17-year-old P-plater all Cameron knew was that he couldn’t afford to build a hot rod. But chance he spotted a slammed XP wagon cruising around town, which kick-started the idea in his head for a wagon of his own themed off a rodding favourite: the Moon brand. But from that point on it would take Cameron seven long years and eight different cars. 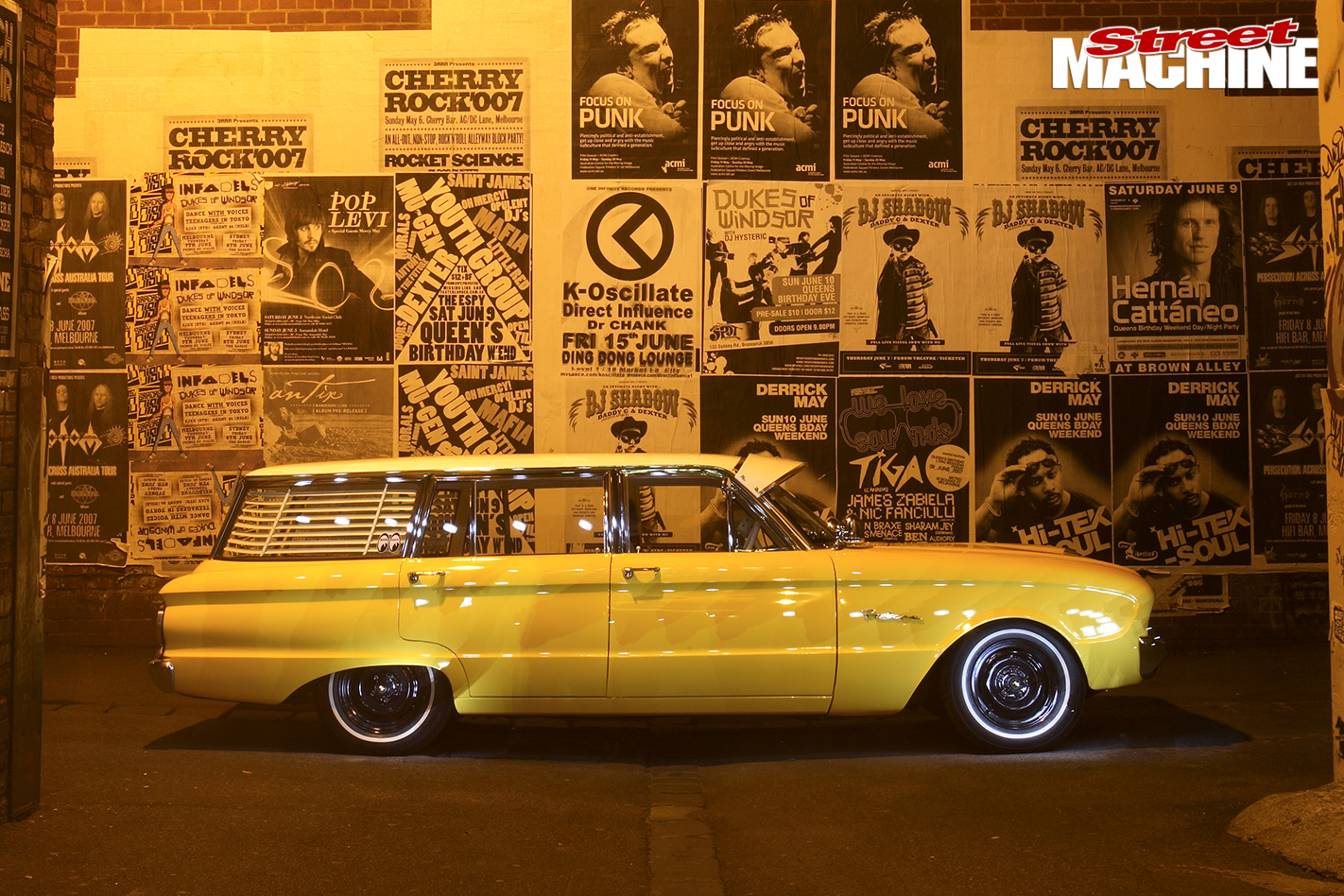 “While I had the XP wagon I decided I wanted to build a Moon-themed XK wagon the way I’d always wanted. In 2002 I started looking for a suitable starting point. After looking at 25 to 30 early Falcons in 18 months – most of them turned out to be XPs – I found one by accident, just 15 kays from my house.”

“It wasn’t in the best shape but it was the only XK I could find,” Cameron explains. “There was rust in the tailgate, all four doors, both quarter panels, the sills, the driver’s side floor and the bulkhead.” Or put simply, it was stuffed.

“So we stripped it down to every last nut and bolt. Everything is now either brand new or fully rebuilt. My dad (Ian) made a rotisserie and my car was placed on it to refurbish the underneath – which now all stone-guarded – and to make it easier to work on.” 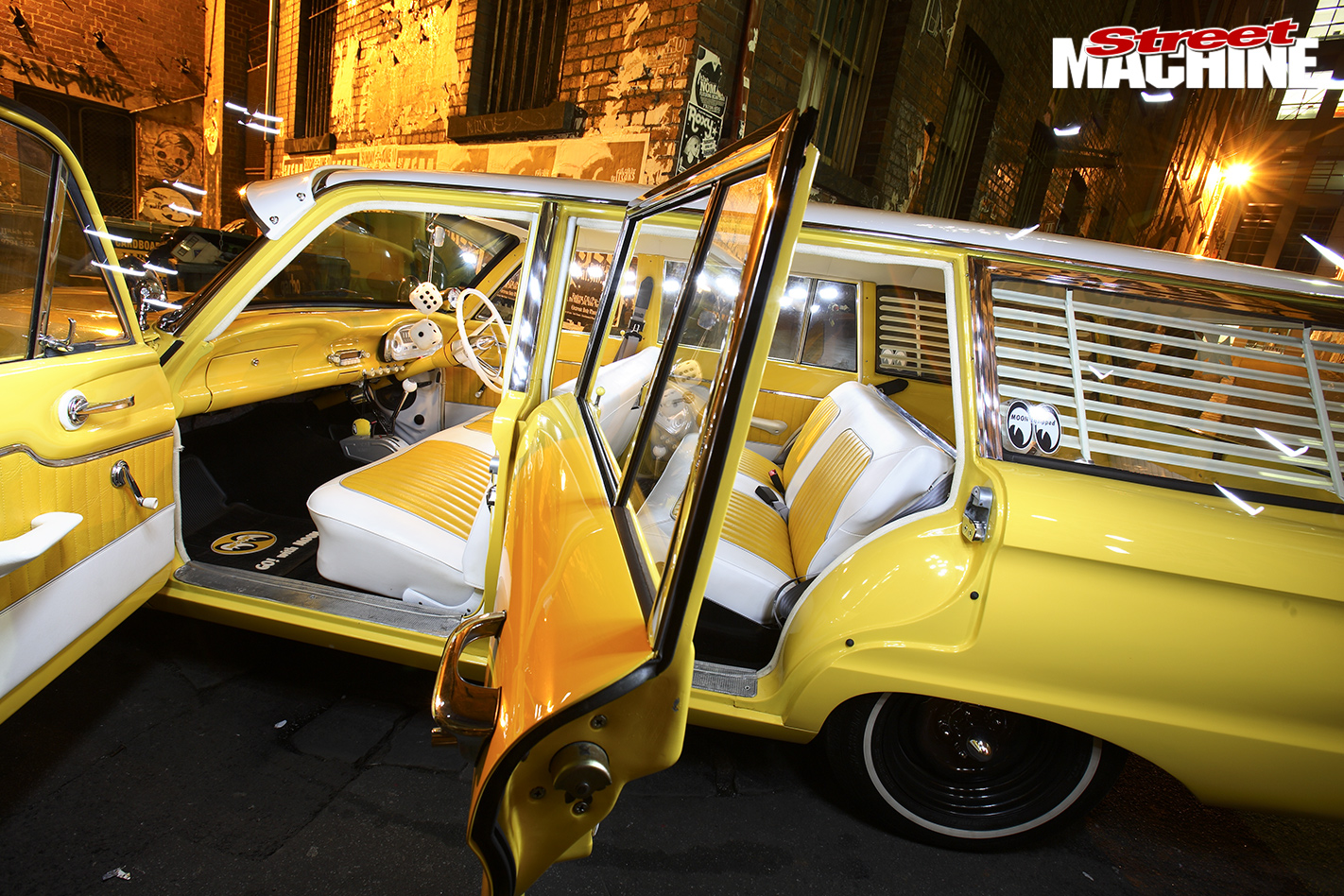 Cameron and his dad removed most of the bright work below the window line, including the stainless steel side trim and tailgate handle (rear glass is now electrically operated). They then smoothed virtually every steel surface: side panels, tailgate, the fuel filler behind the rear number plate, cowl. A host of classic custom tricks sets the wagon right off: whitewalls, exterior sun visor, fake A-pillar spotties, Venetian blinds, chrome bullet hub covers and wheel nuts. One modern touch is the VN Commodore squirters for the windshield wipers which, thankfully, go pretty much unnoticed unless you’re looking for them.

“I mounted a factory XL Falcon bonnet scoop but cut the scoop and bonnet out to make it functional, as the original blanked off and fake,” he says.

Then you open the bonnet and the 60s family truckster suddenly comes screaming into the modern era. 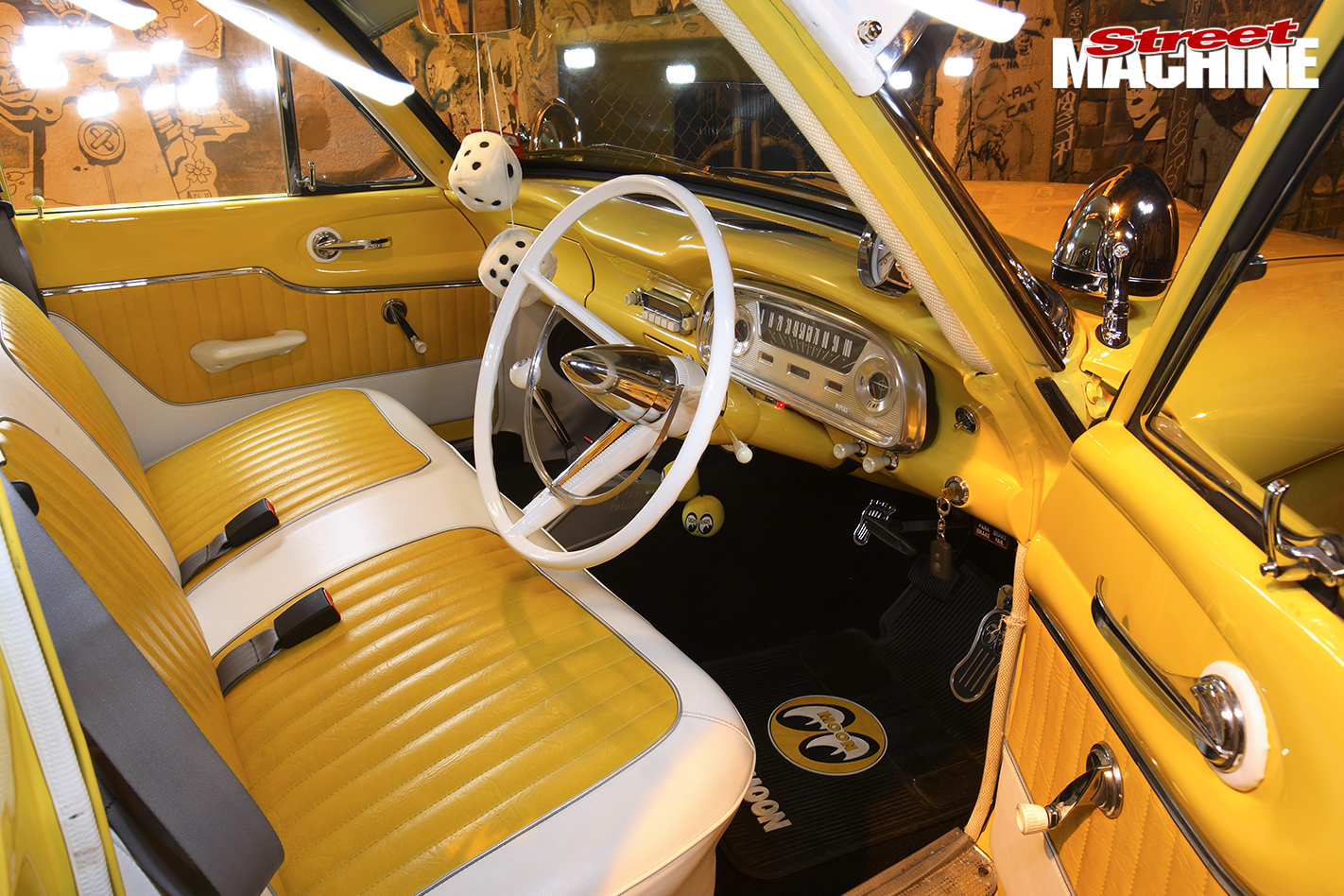 “I was given an XD station wagon by family friends and the plan was to use all the parts I could,” he says. “We had all the driveline dummied up when I spotted a turbo 250 Crossflow motor for sale in the Trading Post. I thought it would be an easy transplant, but there was actually quite a lot of work involved to get everything to fit nicely [see breakout].”

Backed by a four-speed manual and Centura diff, the wagon was making 285 at horses at the rear wheels, or enough to get the classic moving pretty swiftly. But after just 600 clicks, though, the boosted engine spat the dummy.

“So I pulled it down and discovered that one of the stock pistons had let go,” he explains. Thing is, he was told by its previous owner that the pistons were tougher aftermarket slugs, and discovered otherwise the hard and expensive way.

The XE 4.1-litre six was stripped down and treated to a no-expense-spared rebuild worthy of a full-house race engine. The blue-printed bottom end was upped to 255ci and uses forged Wiseco slugs for a turbo-friendly 8.2:1 compression ratio. Southside Cylinder Heads (who also did the machining) optimized the alloy head’s flow to suit the Garrett T04 turbocharger, which runs a moderate 14psi maximum boost. The camshaft is a custom grind billet from Lumpshaft Race Cams. The induction also uses a 440cfm Gas Research throttle body and modified B2 converters to suit the engine’s appetite for LPG. It’s quite a piece of work. 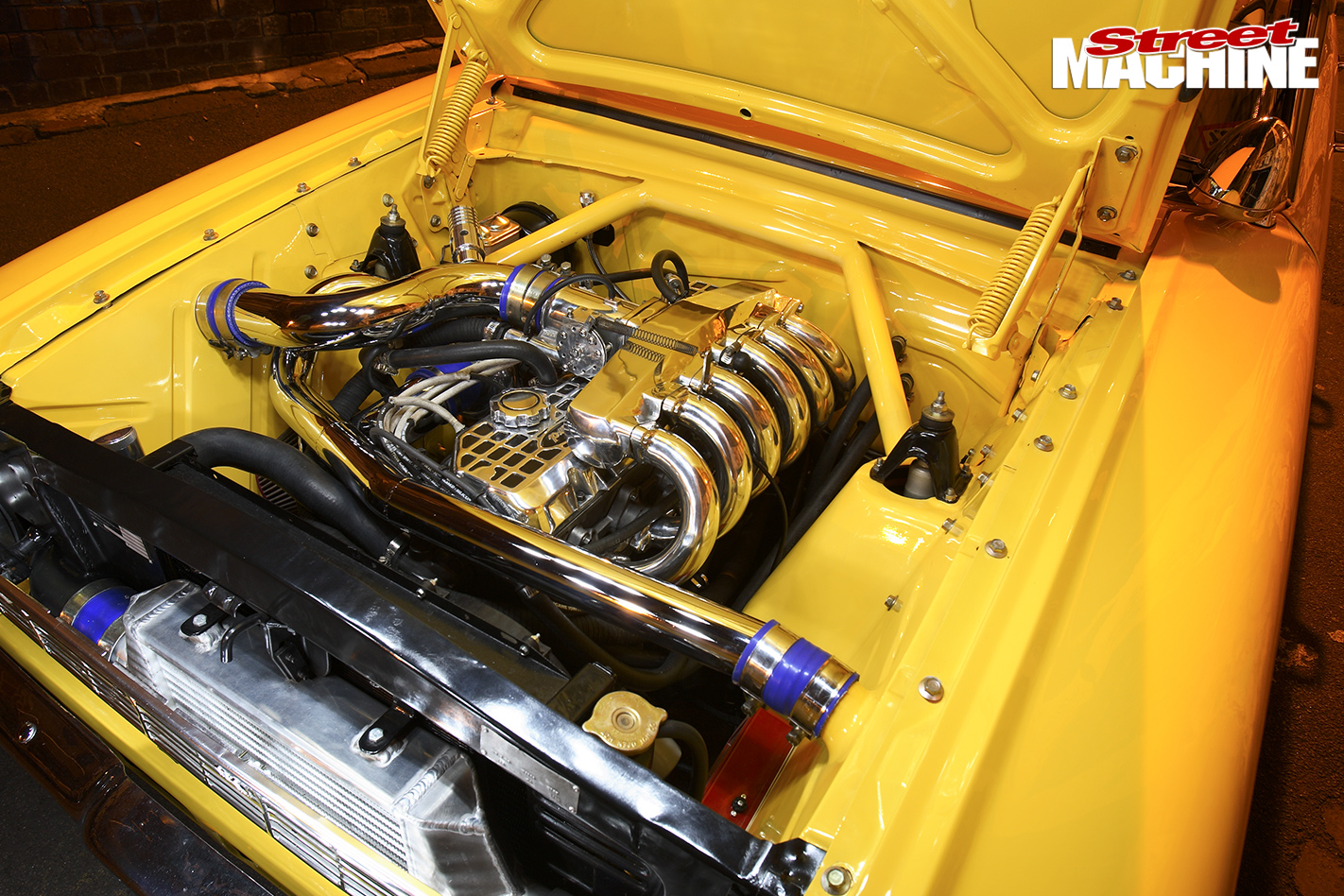 “I’m running the new engine in and it feels heaps stronger,” Cameron says, although he’s yet to run a dyno number. “Gas is great. It also gets good economy – it only costs 20 bucks to fill for a 300-kilometre range.”

With the engine rebuild came a tranny change, from the four-slot manual to a tricked out full-manualized C9 three-speed slushbox by DTM Automatics running a 2800rpm Dominator stall converter. “The auto is the best thing I have done to the car,” the owner says. “It’s awesome.”

XE front disc brakes cope with newfound power adequately and mandated a shift from a four to five stud pattern, while the stock Centura drums are retained at the rear. The super-low bum down stance cut ride height by four inches in the front and five in the rear, done the old fashion way: without using air-bags. Kings Springs and Monroe gas shockers are used, and all other suspension hardware – ball joints, tie-rod ends, etc – was replaced with brand new parts. 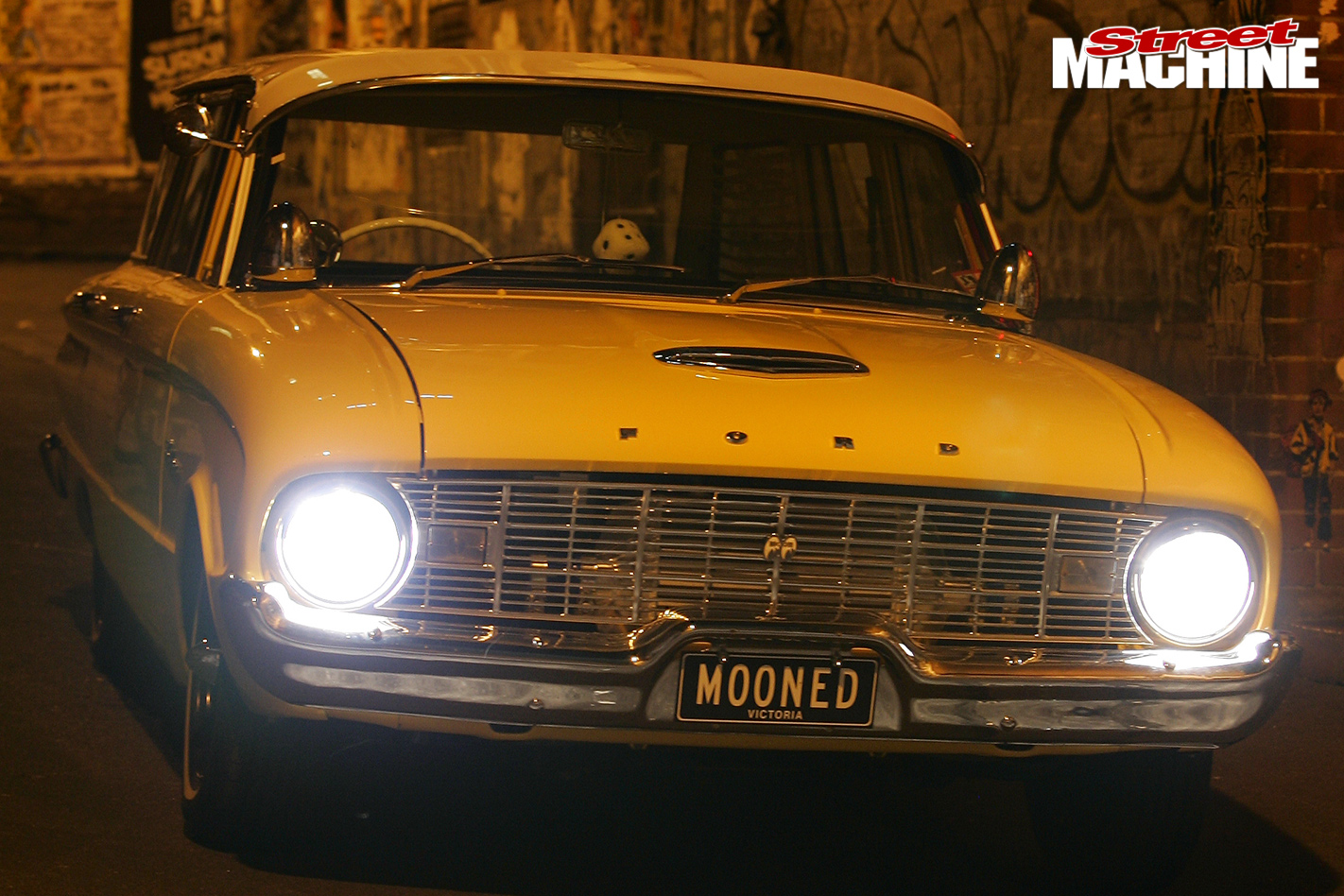 The interior is a stunner and mirrors sticks true to the car’s ‘classic looks, modern power’ direction. The factory seating are trimmed in a neat tuck’n’roll pattern in yellow and white vinyl, while the doors, headlining, dash and rear luggage compartment have been refinished to a show level, completing the authentic 60s cruising flavour. Of course, there’s a host of Moon gear: door locks, mats, pedals, tacho, and an ominous looking four-inch bullet mounted on the steering wheel’s horn ring that sends a clear message: ‘whatever you do, don’t crash’.

But the real grunt is in the stealth stereo system. A JVC CD/MP3 player hides in the glovebox, while Fusion and Soundstream amps power an armada of speakers and subs.

“Each of the custom-made fibreglass sub enclosures and cover panels took a week to make working flat out,” Cameron says. 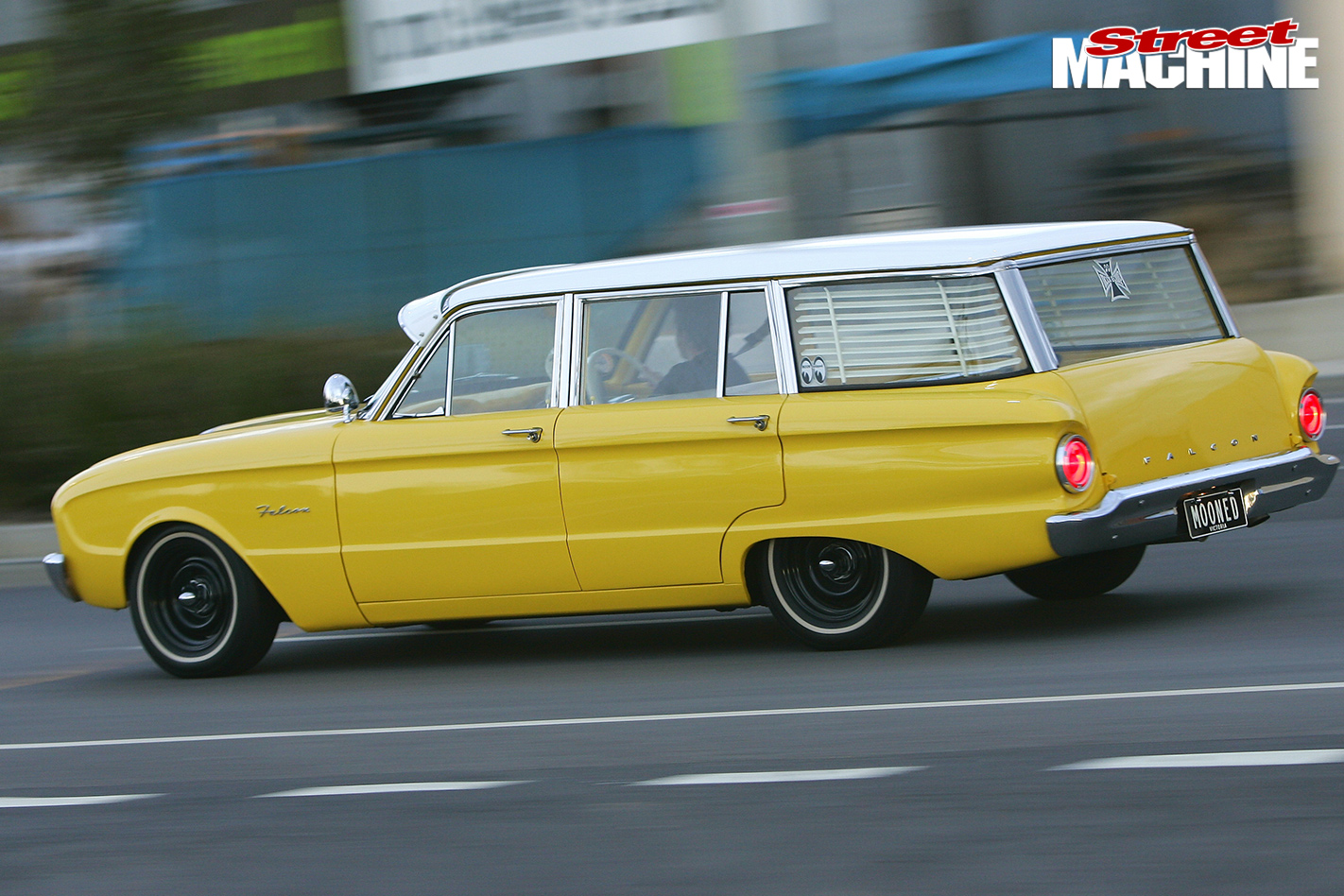 Ask Cameron what his favourite aspect of the car is – the cool style or retrotech engineering – and his answer is neither.

“It’s that the whole car was built in the back shed with the help of my dad and my older brother Aaron. That’s what I am most proud of. There is nothing more satisfying than that.”