Jay Page’s Ford Falcon Squire wasn’t found in a barn. It was wedged between a couple

This article about Jay and his Ford Squire was originally published in the February 2010 issue of Street Machine.

To Aussies, the words ‘Ford’ and ‘Falcon’ are virtually synonymous. Things aren’t quite the same in the USA, where the last Falcon rolled off the production line way back in 1970. In a country where high-school kids got Mustangs as graduation presents, the Falcon was looked at as a compact car and has nothing like the motorsport heritage of our mighty GTHOs.

That means they’re rarely the subject of elite street machine builds in the US, which makes Jay Page’s 1963 Falcon Squire really stand out. 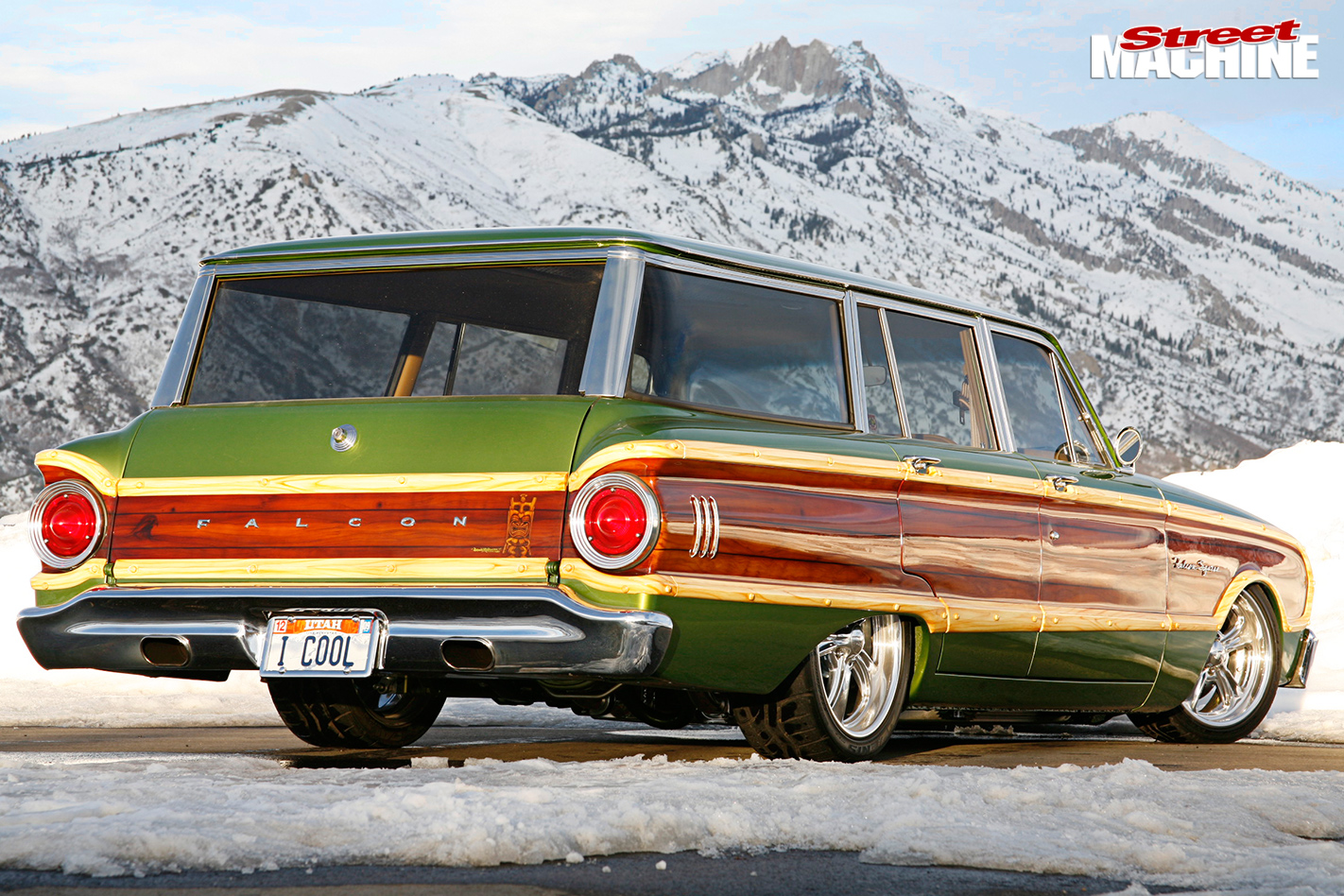 “The 1962 to ’65 models are quite popular over here,” Jay, who hails from Bluffdale in Utah, says. “I’ve always liked them and my eldest son has had a couple, so when I spotted this car I wanted it straight away. Squires are pretty rare and the fact that it was a factory 260 V8 made it even more interesting.”

Actually getting his hands on the car took considerable determination: “I saw it wedged in between two barns five years before I finally got it,” he says. “The guy who owned it wanted to restore and didn’t want to sell, but I kept asking.

“The last time I showed up, his wife was there. I asked if her husband would be home later. She said: ‘Probably not — he passed away,’ [laughs] and agreed to sell me the car. I was lucky, because another guy had already put a $50 deposit on it. He wanted to turn it into a demolition derby car but I guess his buddies talked him out of it. I left $100 and picked it up the next day.” 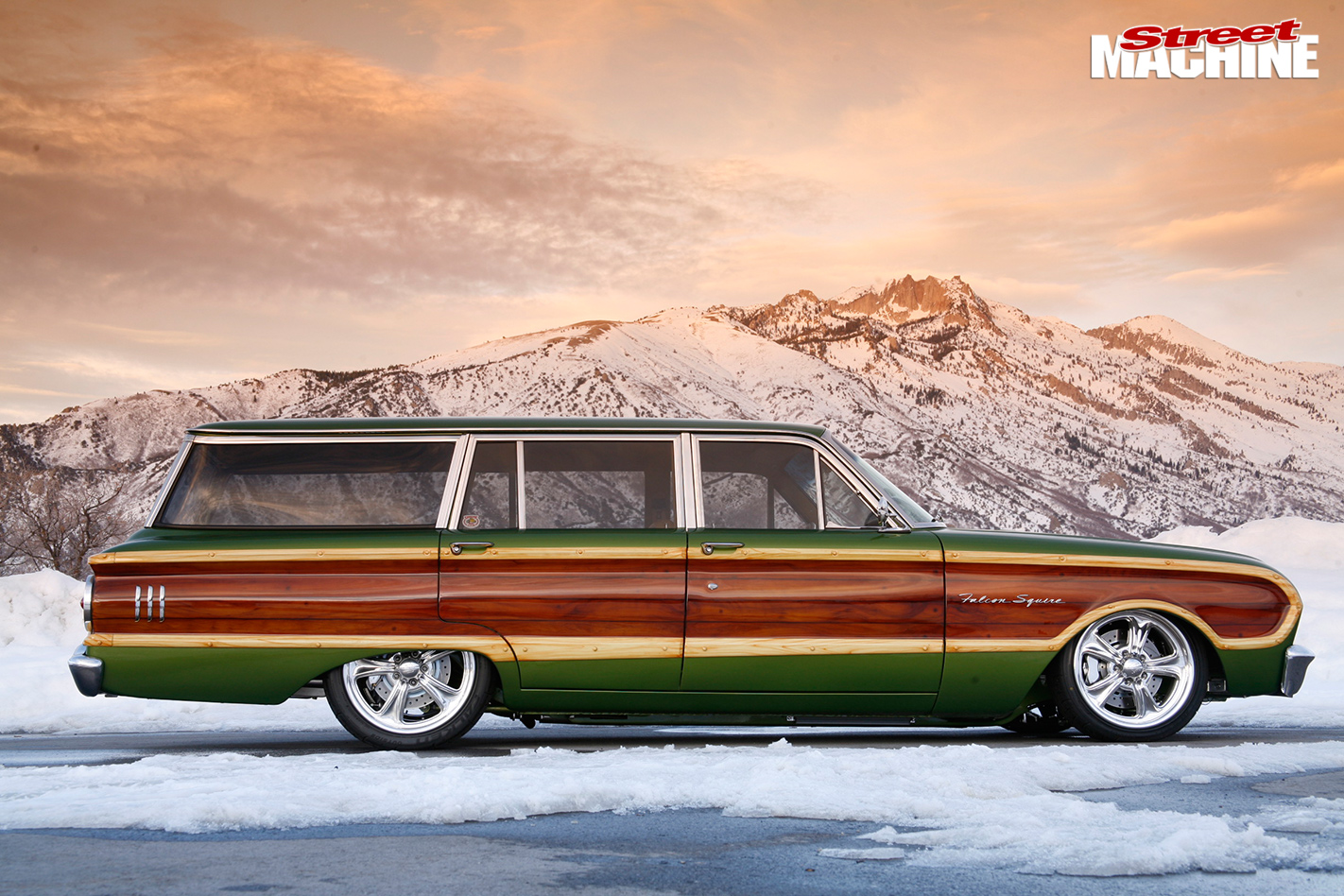 As the father of three petrolhead adult sons, Jay was a little apprehensive about the reception the somewhat dilapidated Squire would receive.

“I thought they’d just look at it and say: ‘Where did you get this piece of junk?’ but straight away they crawled all over it and were tossing around ideas for what we should do.”

Jay’s own ideas were for a light resto-mod job but his eldest son, Jeff — who runs his own panel shop and ended up doing most of the hard yakka on the Falcon — was keen on a full Pro Touring-style build.

“We talked around it a lot, until we saw the 427 IR Roush motor at SEMA, which sealed the deal for the Pro Touring idea. We decided to keep the body fairly original but pretty much replace everything else.” 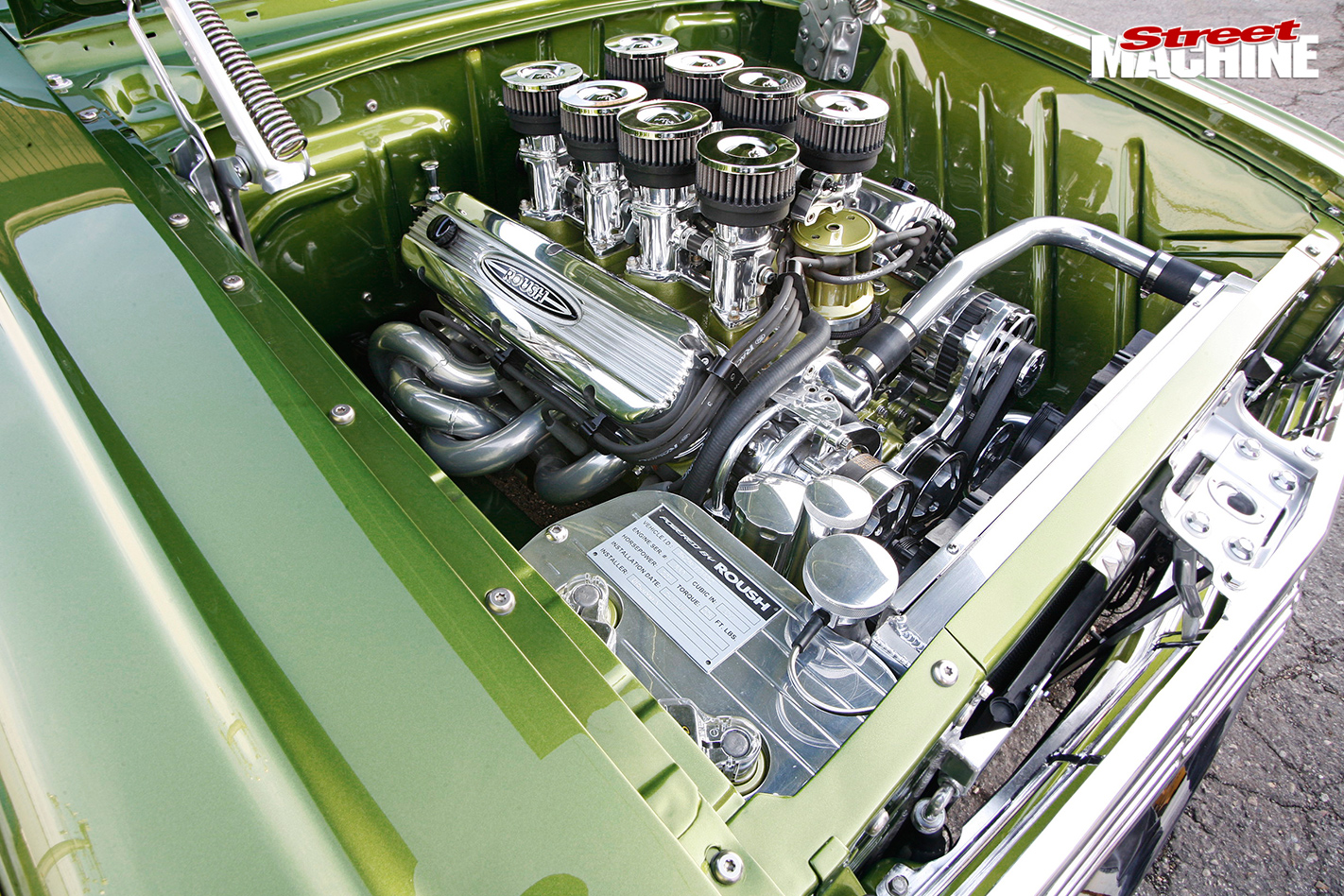 He’s not kidding. The chassis was thoroughly beefed, with the standard unibody frame plated, chassis connectors added and box tube added along the length of the standard frame. Up front, Jeff fitted a Mustang II crossmember with two-inch drop spindles, Air Ride Shockwaves and rack and pinion steering.

Out back is a canted four-bar rear, with a nine-inch diff and another set of Shockwaves. Brakes are Wilwood all around. All top notch stuff and all very necessary considering the 527hp on offer from the Windsor-based Rousch 427 IR!

The boys stuck with the respectful approach when it came to the body, with a few choice mods to tidy it up. The indicators and bolts were removed from the front bumper and a couple of driving lights were frenched in, while the rear bumper was narrowed, shaved and fitted with exhaust cut-outs. The engine bay was thoroughly smoothed over as well, and the front beaver panel was lengthened for a smoother look. 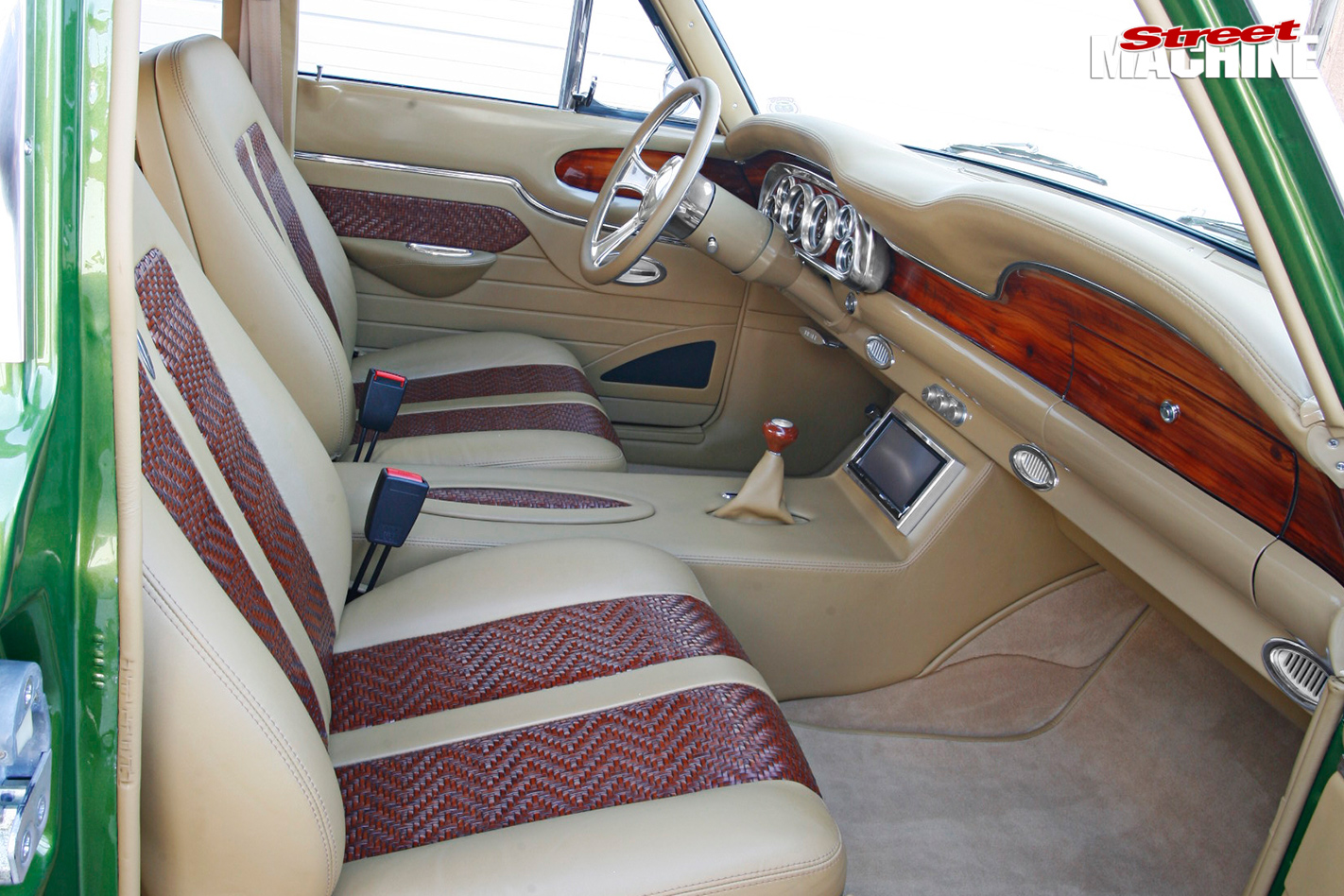 The real impact, however, comes from the contrast between the custom-mix BASF paint and the fibreglass trim. A lot of time and effort went into getting the factory fibreglass ‘wood’ trim to fit the car and look correct. In fact, the Pages even outsourced the paint to the middle of the Pacific, to Dennis Mathewson of Cosmic Airbrush.

“We were looking for someone to paint the wood on the sides and Dennis was the best out there,” Jeff says. “We went on a cruise in Hawaii and went to his shop. When we told him about the Falcon he was very excited and ended up coming to Salt Lake where we got it prepped for him to paint. Then I cleared and candied all the airbrushed wood.” 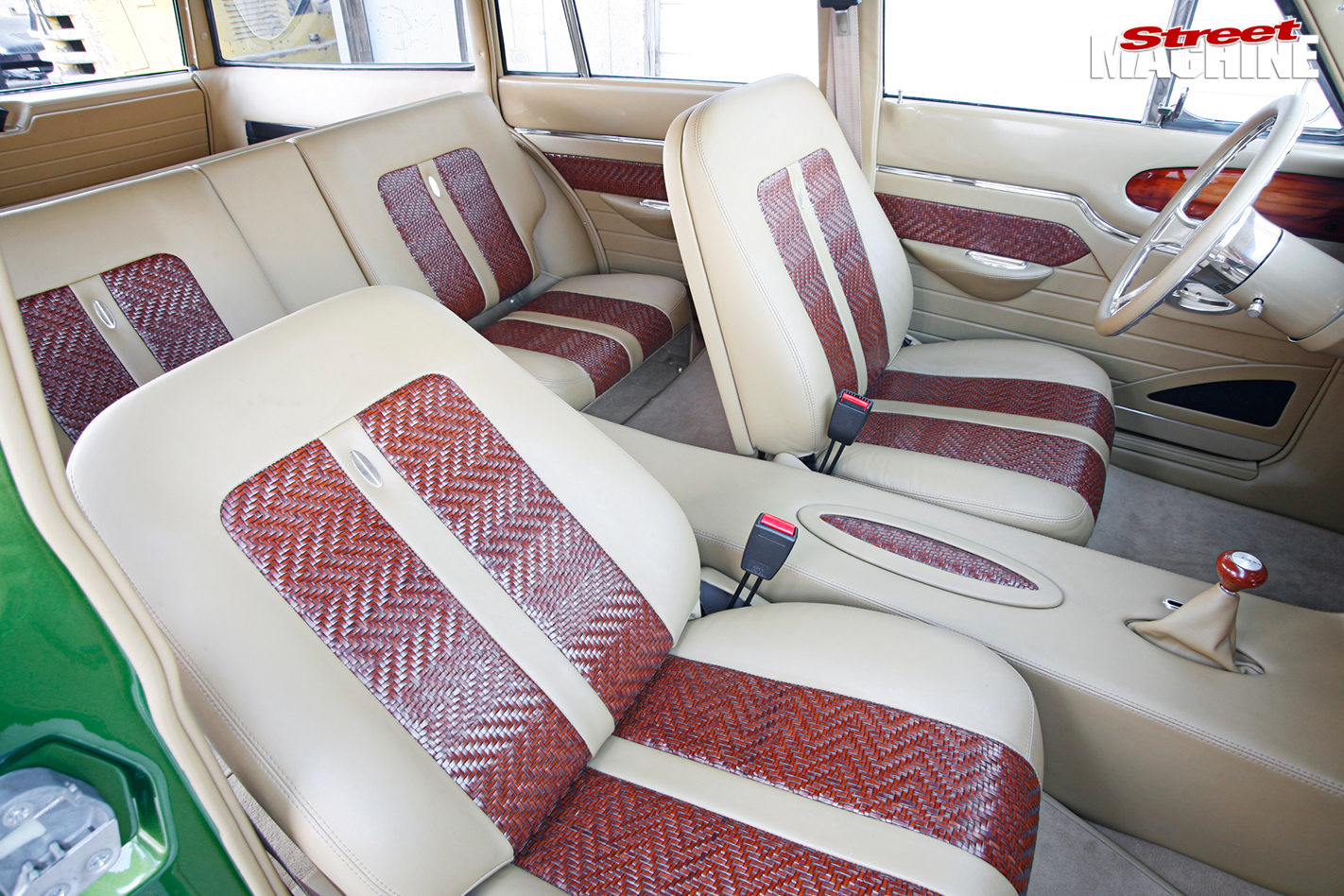 The Falcon’s interior is a highlight, with the wood theme continuing across the dash and into the front doors. The dash itself was thoroughly modified, with the radio and ashtray deleted, the ignition key moved to the right, the switches moved to the left, a custom steel glovebox, and a billet dash insert to house the Auto Meters. Luxuries include a Vintage Air set-up, power bucket seats, tilt steering column and an Alpine entertainment system housed in a custom centre console. The whole deal is trimmed out in Porsche leather by JS Custom Interiors, with basket-weave inserts throughout the cabin adding a Polynesian touch to the Squire. 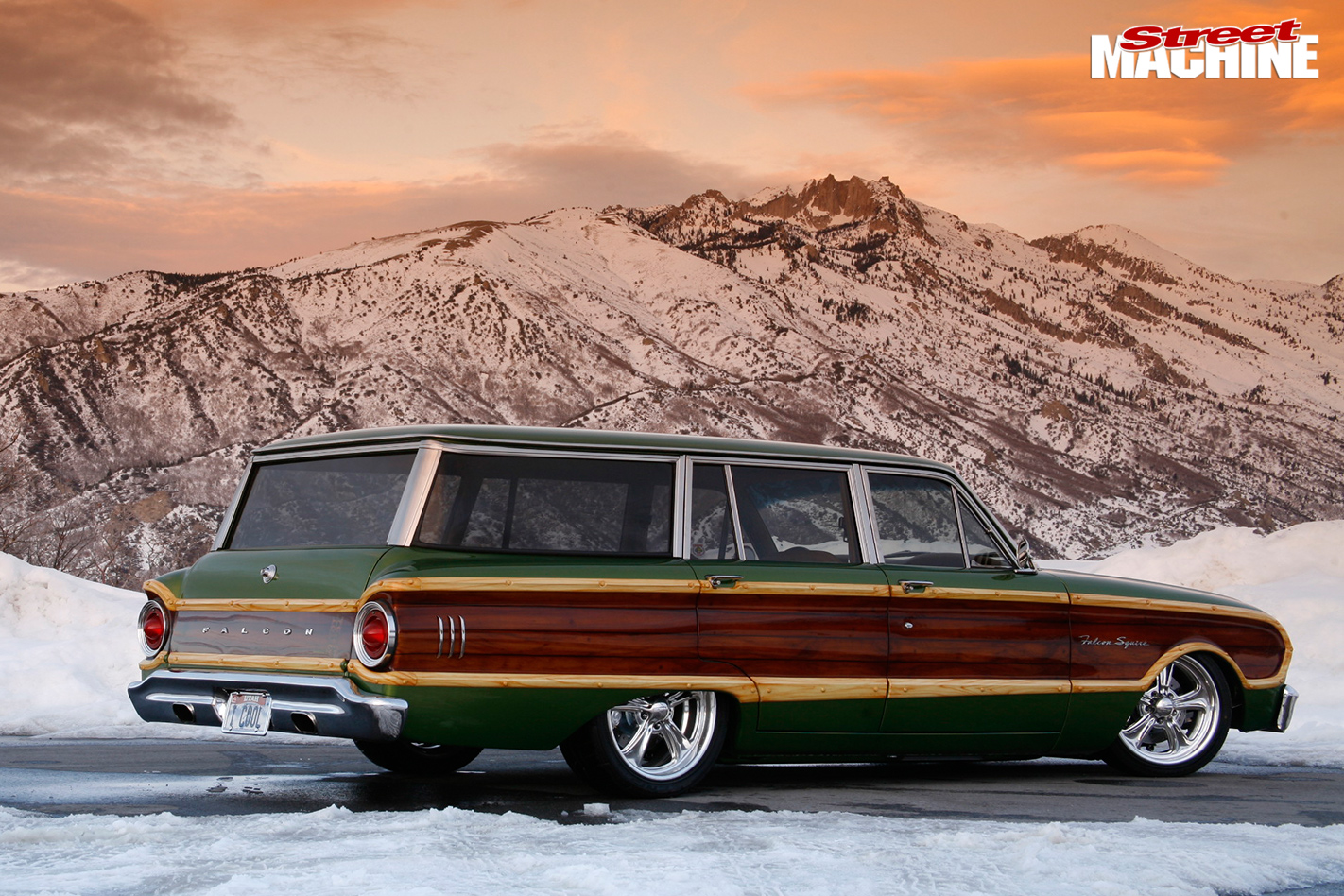 “We’ve had a lot of fun with this car,” Jay says. “We’ve been to a lot of shows and the car has done really well. Now we’ve been invited to display it at the Grand National Roadster Show in LA, which is a real blast.”

And in case you were wondering, yep, Jay is a Ford man through and through. “I’ve got about 20 Fords, including a ’37 pick-up that I bought the summer I left high school. It was there at the start of my career as a carpenter. It’s hot rodded now — all Ford of course.”