YOU can see this EH is special at a glance, though it may take a little longer to realise how special. There’s subtlety, style and enough grunt to satisfy all but the truly insane. But get up close and this classic Holden will make your head spin — the engineering and craftsmanship are breathtaking.

EH Special — but while a quick look gives a hint, the full artistry involved doesn’t become clear until you get inside and underneath

Naturally, when Anthony Newman bought a project car to build with his sons he had no idea of what he was getting himself into.

The model was chosen as a bit of a nostalgia trip: “My mates and I all had EH Holdens. Mine was bronze — lowered with flared guards and chromies, as you did in the 70s,” he recalls. 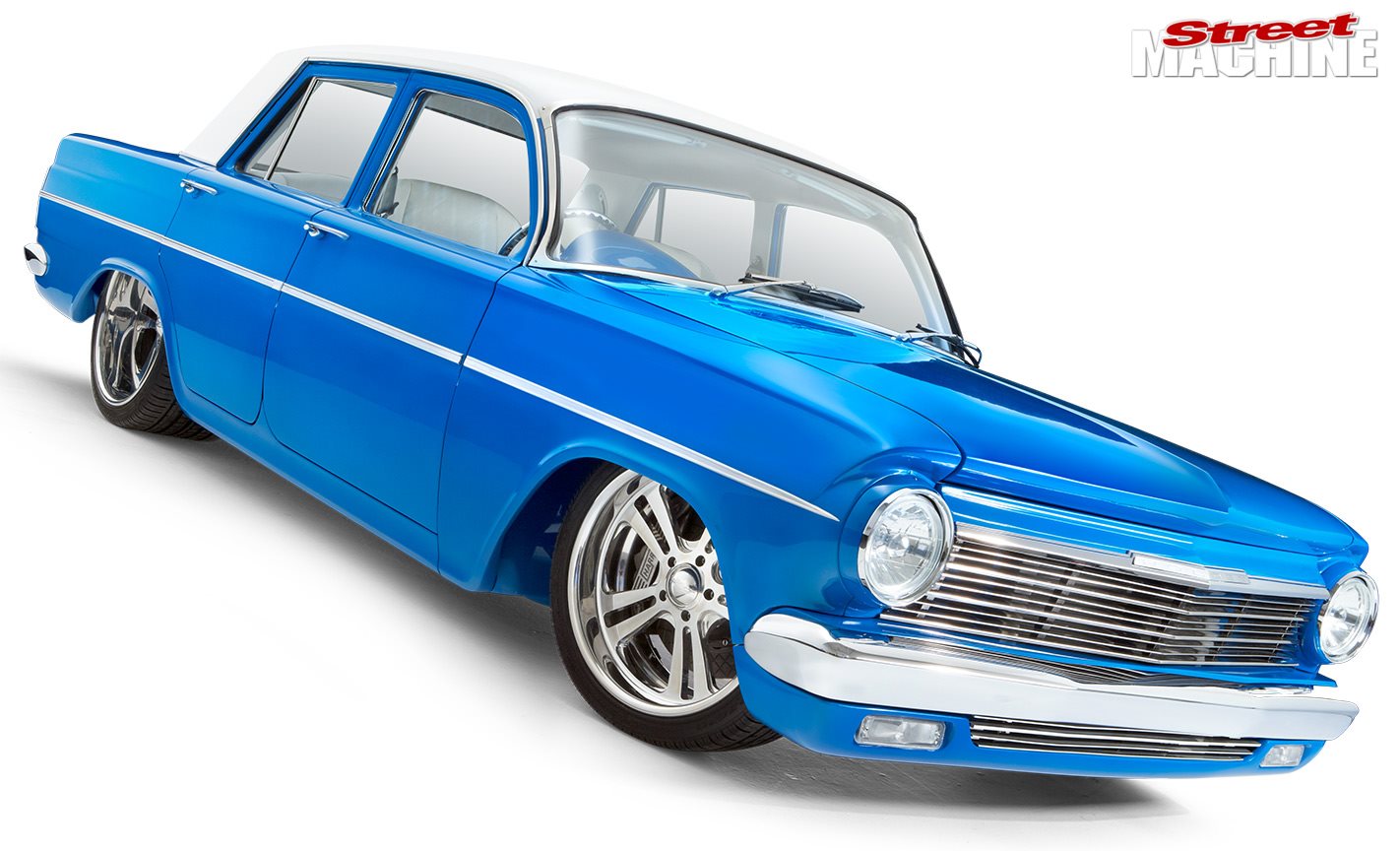 While the body is virtually factory-stock, the stance is most certainly not. Monster Harrop brakes ensure she has the whoa to match the go

The original car moved on of course but 30-odd years later, fond memories convinced him another one would make a fun project. As a bonus, it might also become a promotional vehicle for his son Matt’s One By One clothing business.

Finding a car was easy; building it proved a little harder. 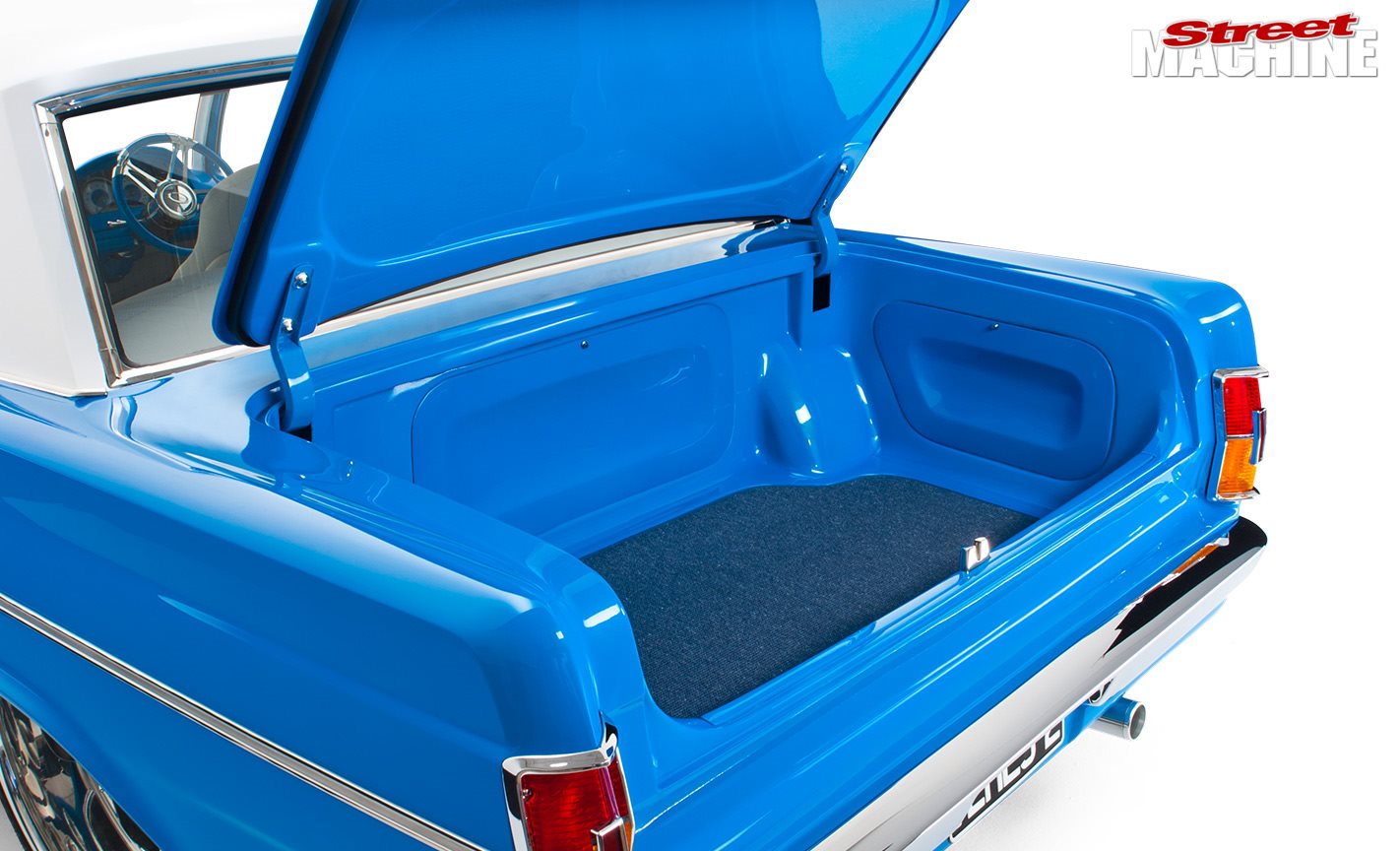 “We paid about $3500 and it was in reasonable condition,” Anthony says. “It had rust in the front guards but that didn’t matter because we had new old stock guards to replace them. I didn’t want to buy anything too good; we didn’t want to wreck a good one. Then Matt went and bought the 20x13 wheels — they definitely don’t bolt on and I knew I didn’t have the engineering skills to make them fit.”

So Anthony handed the EH off to the late, great Bill Musset who was working out of the Castlemaine Rod Shop — we actually ran a news item on this build in Dec ’07. 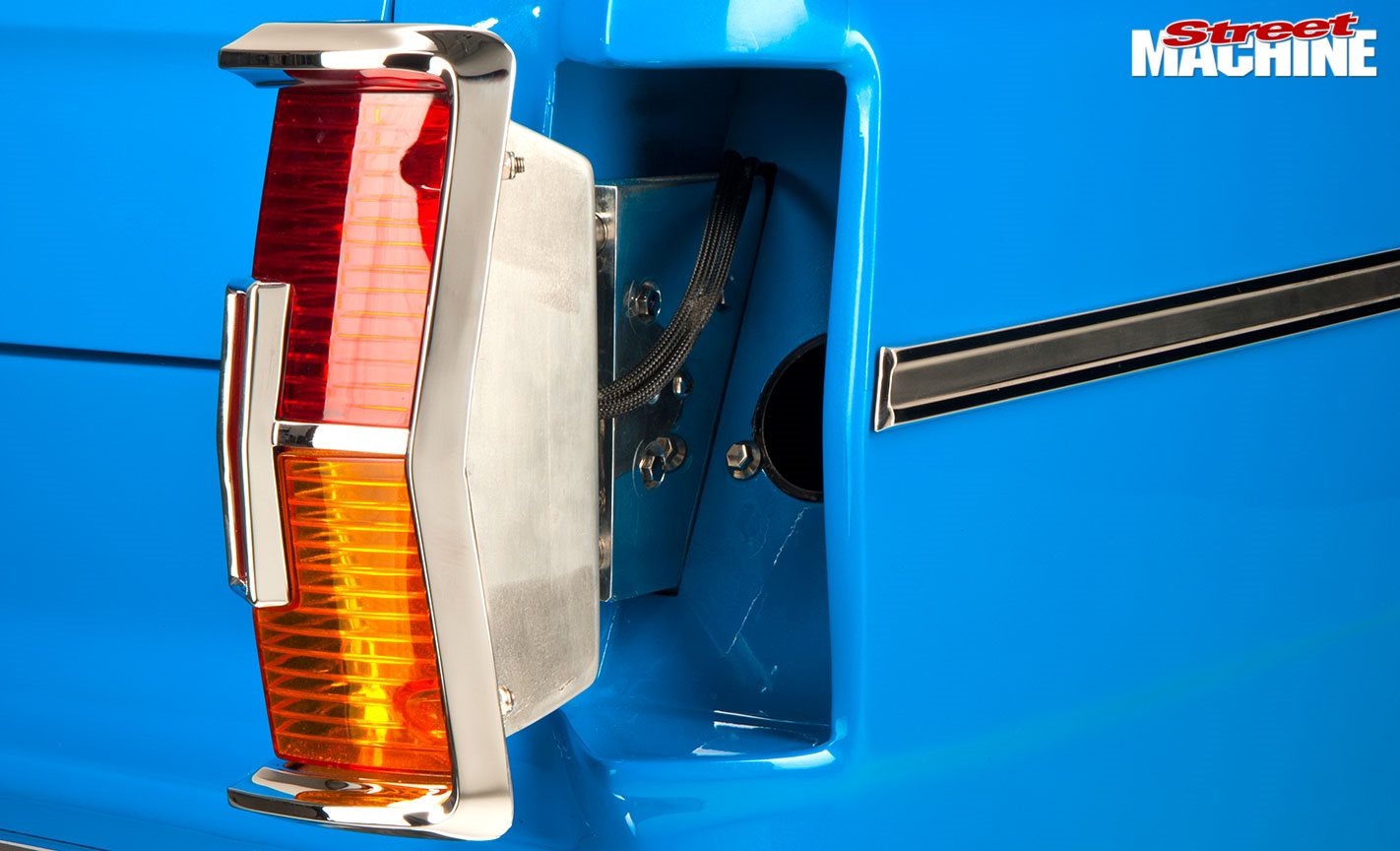 The driver’s side tail-light swings out to reveal the fuel filler, with a solenoid holding it in place until it’s needed

By then the car already featured a crossrammed six-litre LS2 V8 and Tremec TKO-600 five-speed. The engine was built by Neil Burns of HRT and Brock fame. He filled a bare block with all the right gear and on John Sidney’s dyno the alloy donk cranked out 550 horses.

Read next: Our Top 20 EH Holdens 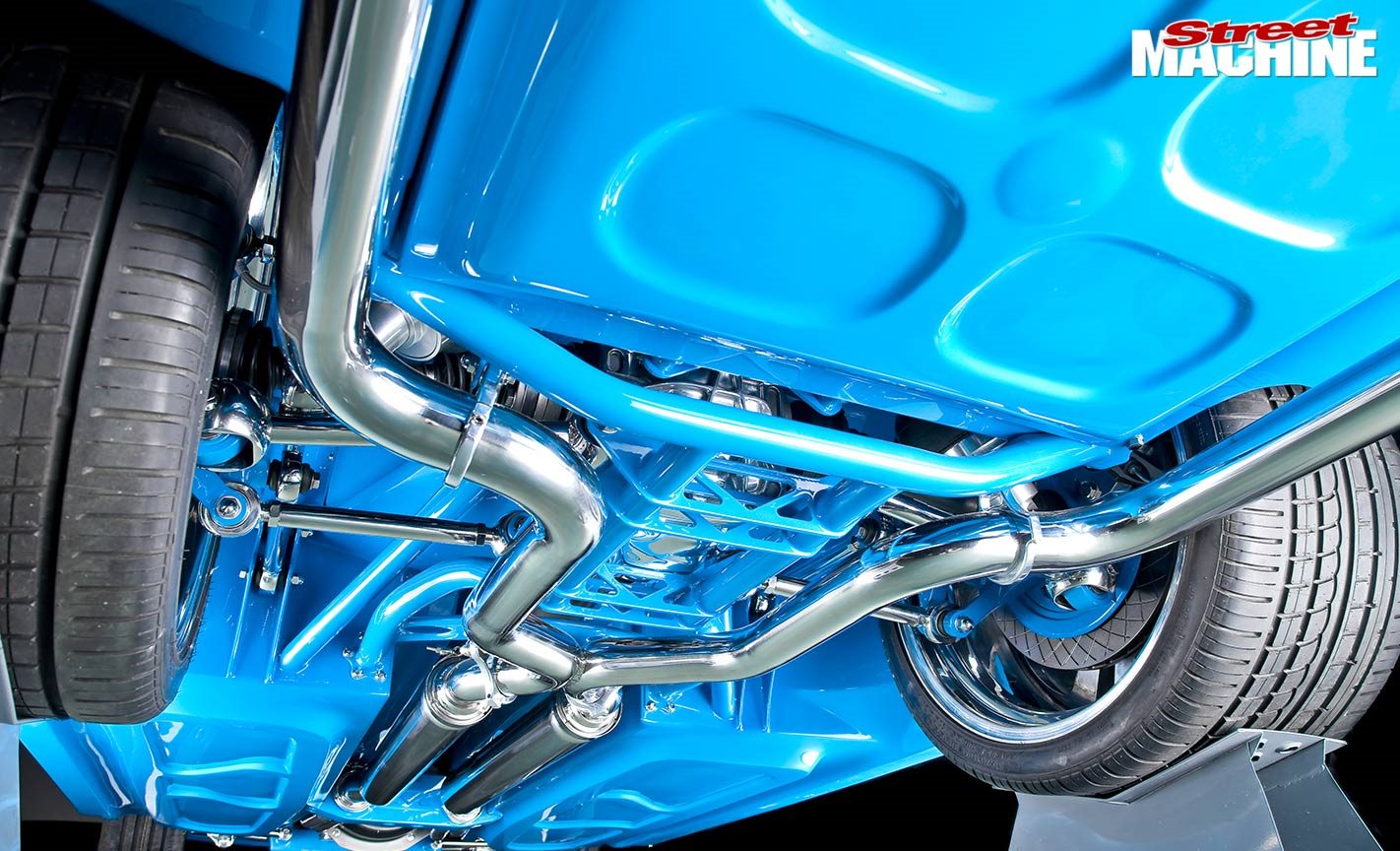 Check out that stainless exhaust. The HPC-treated headers were built by Bill Musset while Steve did the polished twin system and custom mufflers

By then Bill had the custom chassis built, with airbagged BA Falcon Control Blade IRS in the back supporting a Harrop IRS nine-inch, and stainless arms in the front running the Ford stud pattern. Massive round-shouldered tubs filled out the rear end and extended into the rear door openings to cover the Pirelli-shod 13in-wide Boyd rims. The car was destined to be a work of art until Bill was tragically struck down by cancer.

“It was at the point of no return — bolted to the jig with the guts cut out of it. There was no going back. But of course it all ground to a halt after Bill died.” 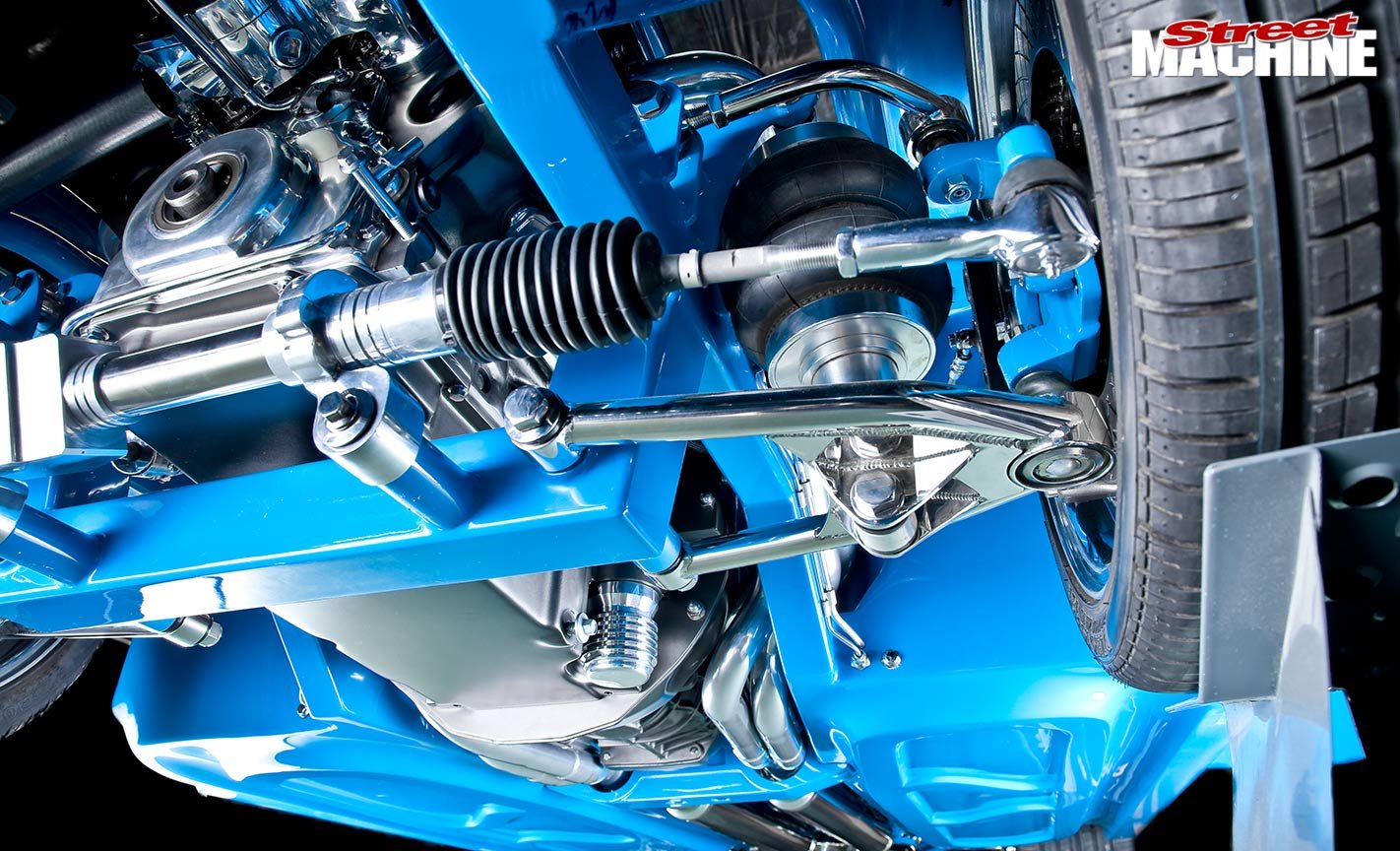 Eventually the car found its way to Steve Alldrick at Deluxe Rod Shop. “It was an empty shell tacked to a chassis,” Steve says. “There were no inner guards, radiator panel or floor. But Bill’s chassis was a work of art — I don’t take any credit for that.”

A great chassis demands a body that’s up to scratch and that’s what Steve and his crew at Deluxe Rod Shop set about. Dig out your old mags again — in the July ’11 issue (page 146) you can see the EH before it copped paint. 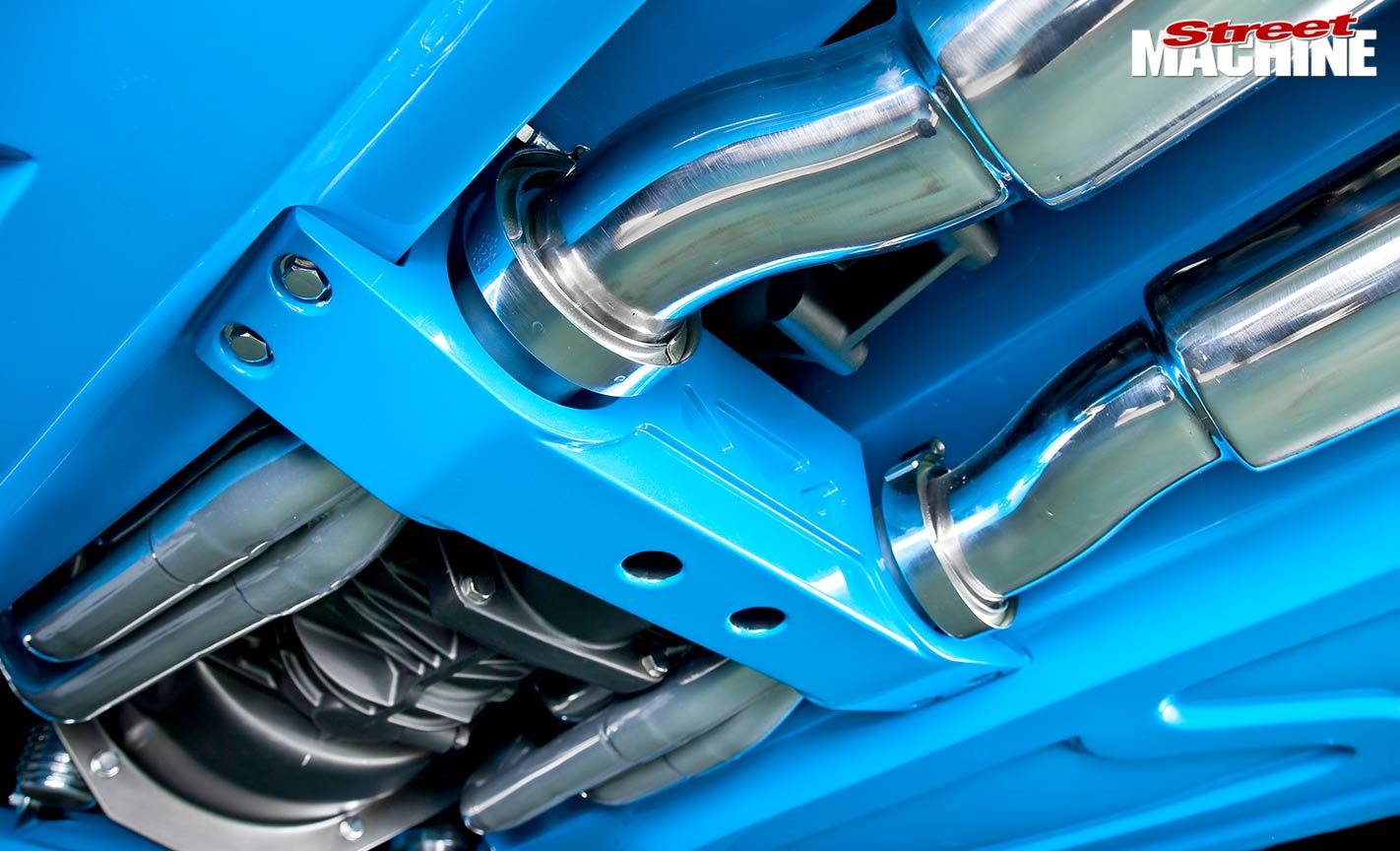 The hand-fabbed gearbox mount is a work of art and conceals a rubber mount for the Tremec five-speed. Bellhousing is a Quicktime unit

Steve loves to work with sheets of raw steel. “From the sills to the tunnel is all one piece,” he says. “It’s quite easy when you get you head around it but each side still took five days to do. It’s simple but time-consuming. It takes planning.”

That’s just the floor; almost every internal panel was formed the same way. From the radiator support to the inner guards, firewall, front scuttle and boot, nothing is standard. The engine bay, the boot and every door opening has been customised. 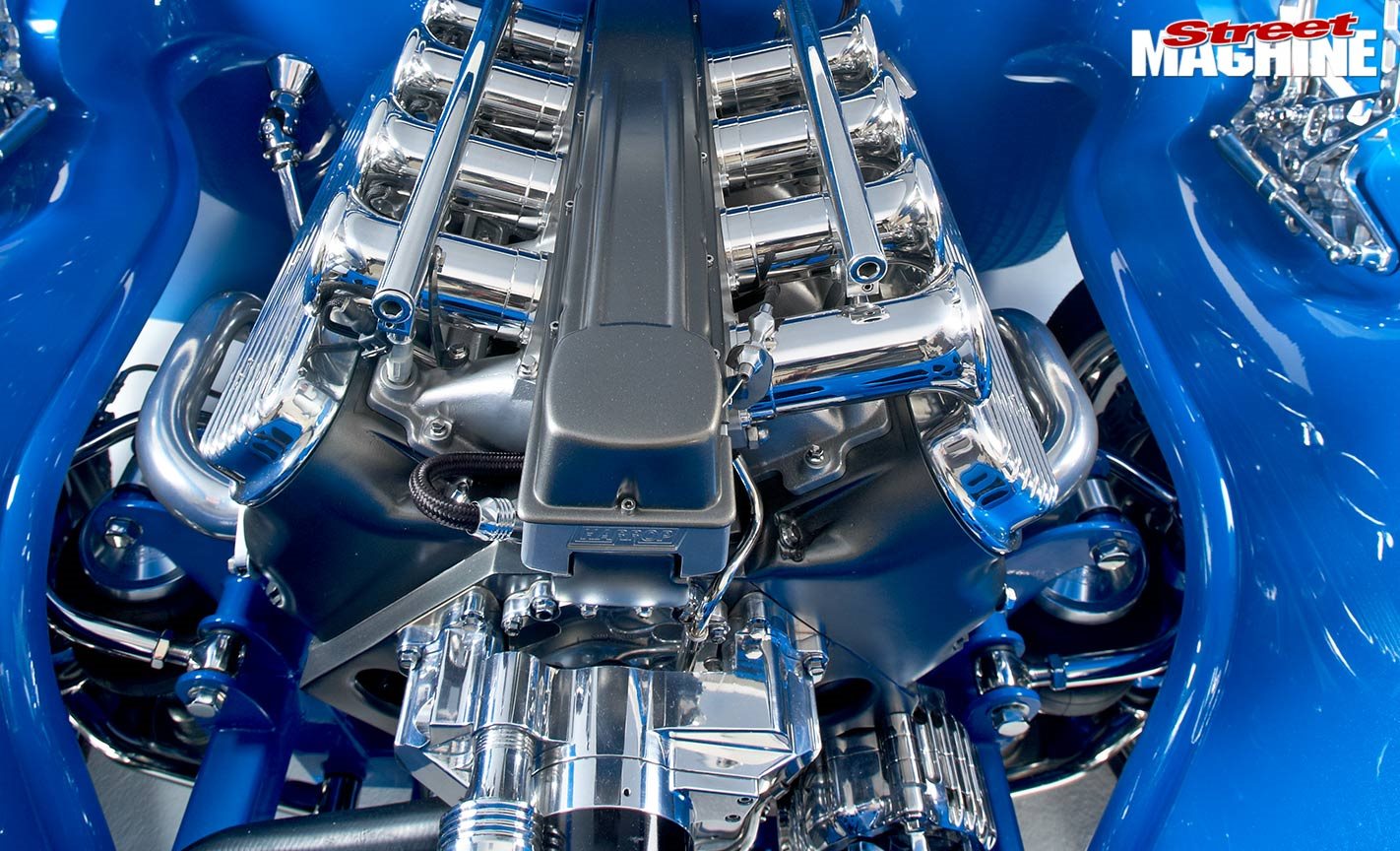 Dynoed at 550hp, the Harrop Crossram-equipped LS2 6.0l is the perfect balance of beauty and brawn. Note the filled and smoothed heads and block

The craftsmanship continues inside, with the bottom half of the dash and alloy console all formed with English wheel and hammer.

Look at the arch under the dash — Steve saw no reason to close in dead space. “There’s no heater, no air con, just the MoTeC under there.” The power window switches are hidden there too.

The top half of the dash is plastic to suit the VY HSV fascia. “That’s something Anthony wanted,” Steve explains. “I’d have made it out of metal.” But the customer is always right so he made it work. 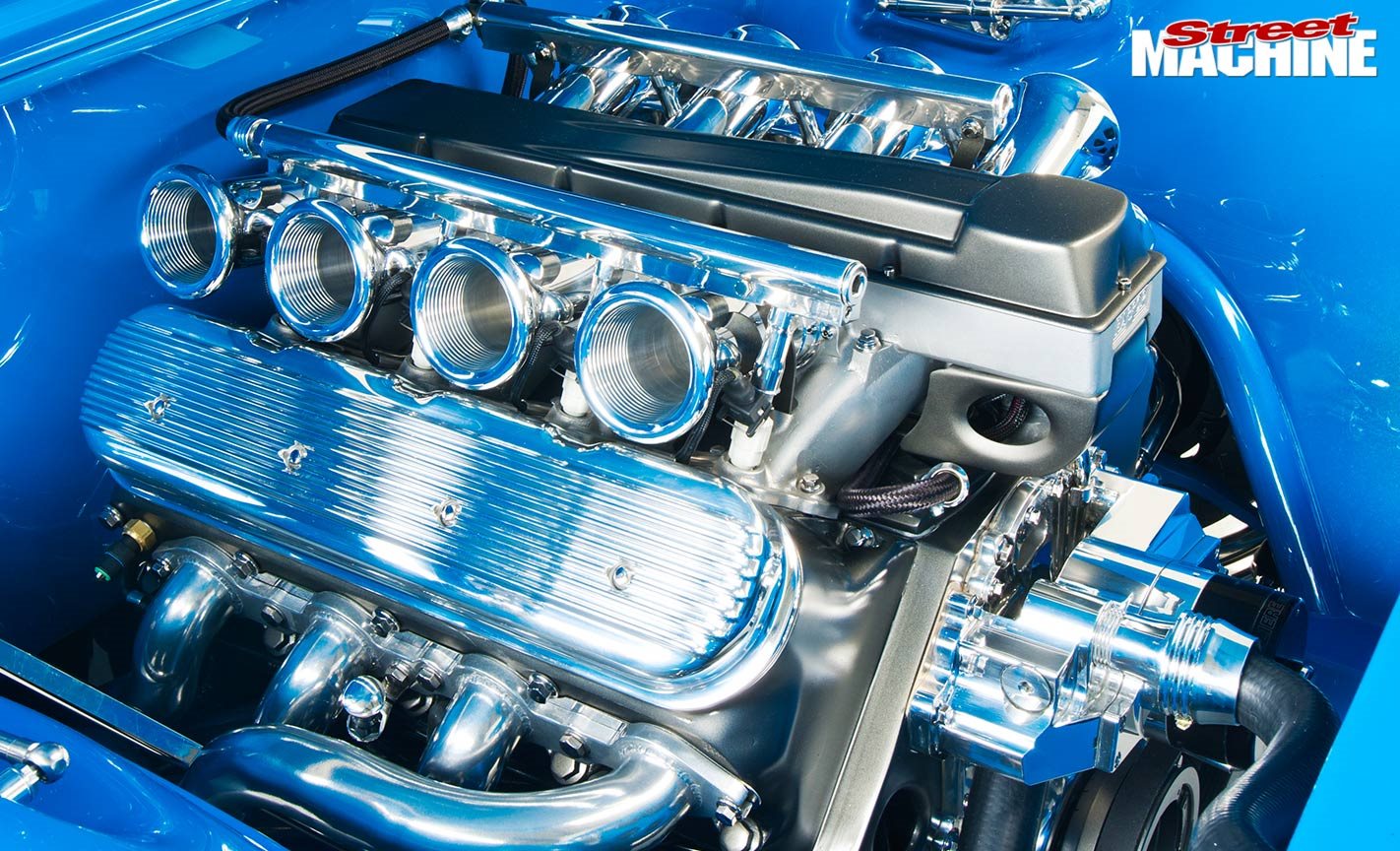 “It’s a modern dash with the same kind of curved binnacle as the original,” Anthony explains.

The front seats are also VY HSV; the rear pew is custom and light grey leather covers the lot. All the door trims are Alucobond, a signboard material made from sandwiched sheets of aluminium and nylon, and each was wheeled and blocked from a single piece, then directly covered in leather. 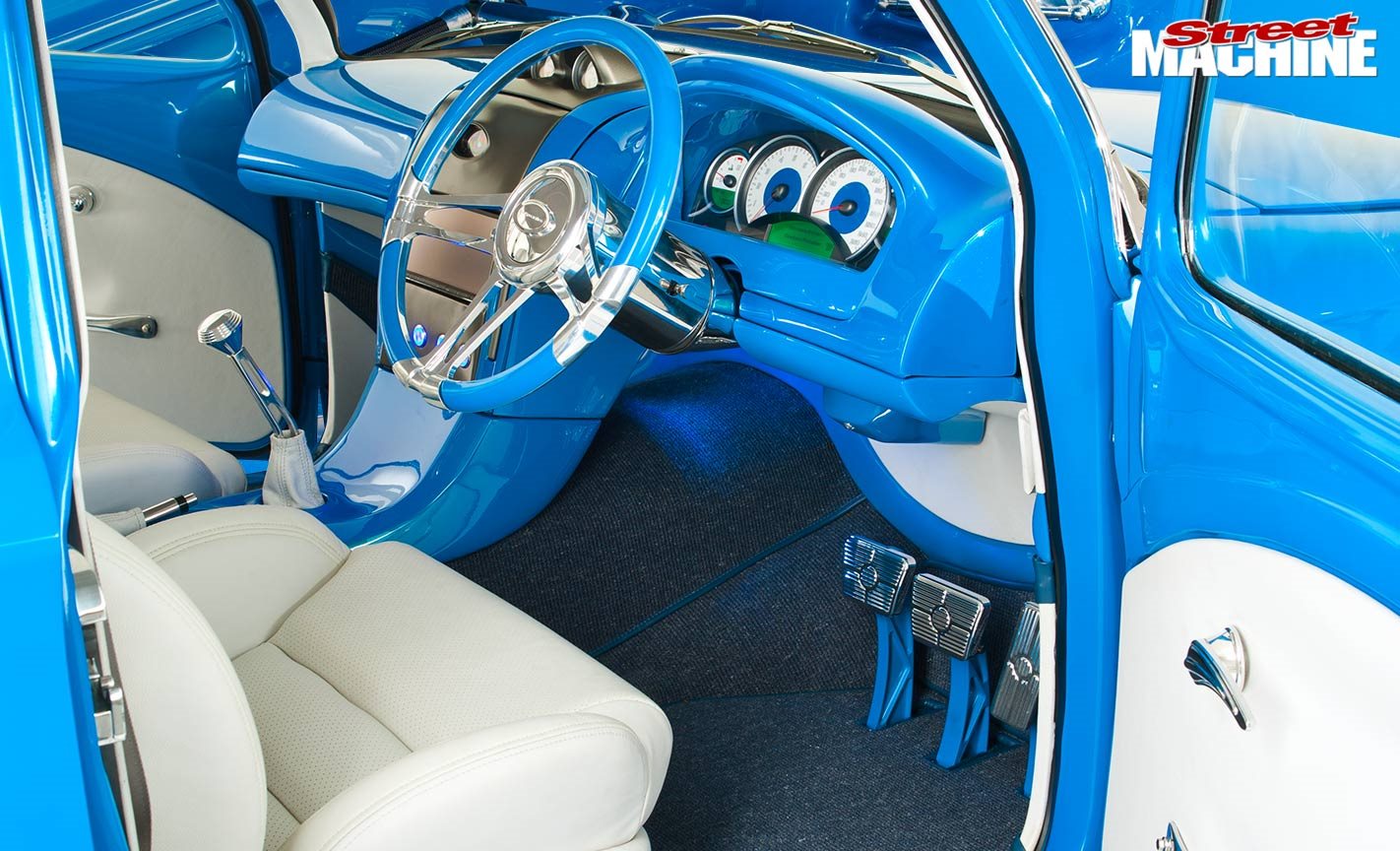 “People ask why we didn’t make them out of plywood and bog but that’s so 20 years ago,” Steve says. “The Alucobond takes really well to shaping.”

The attention to detail throughout is just amazing, even where no-one will ever see, and every bolt in the car is polished stainless. “If someone pulls this thing apart, they’re going to say: ‘Fuck, who built this car!?’” Steve reckons. 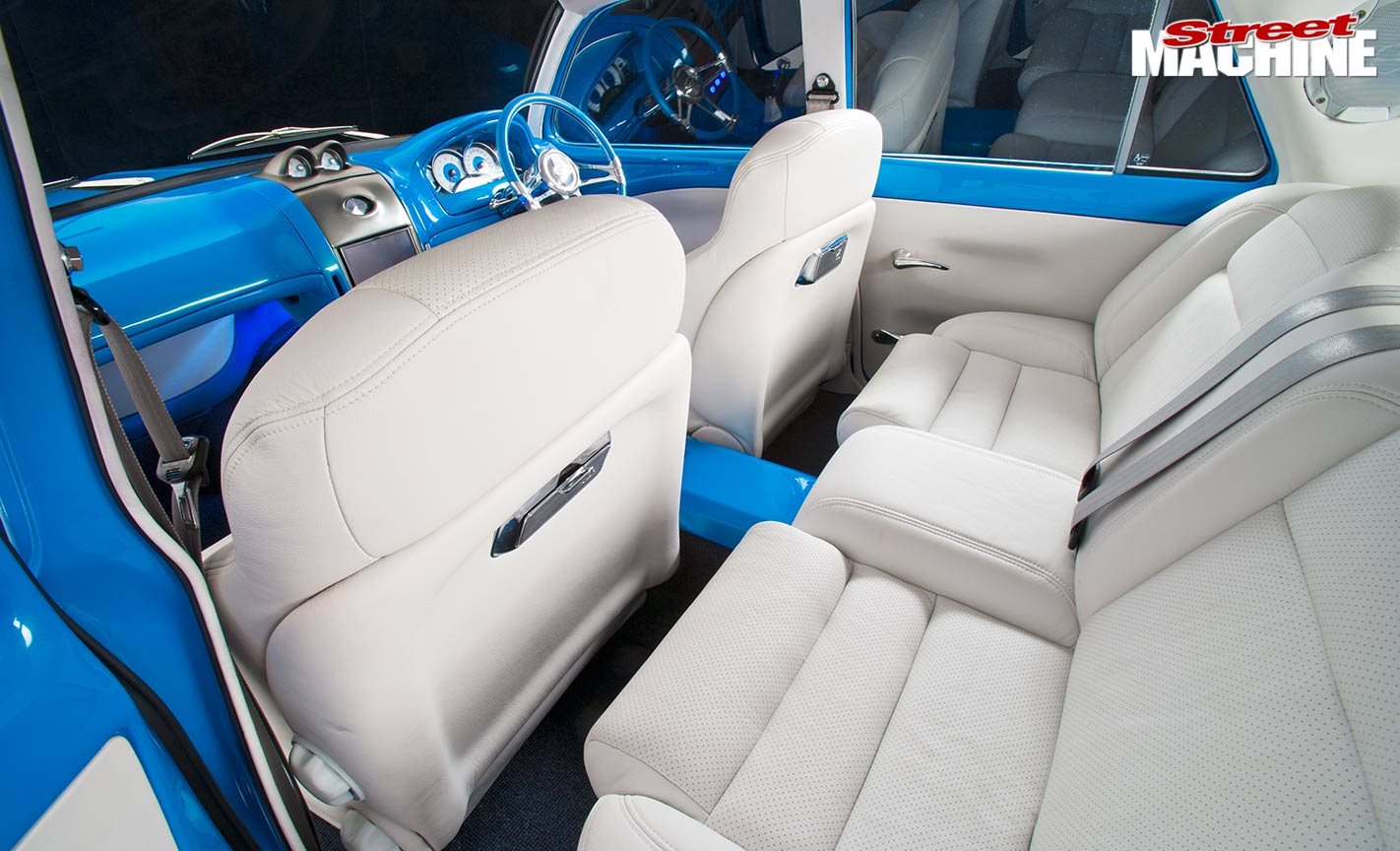 The VY HSV seats and dash were early additions and give the classic Holden a modern twist. Rather than the traditional leather wrap, they blocked and painted the Billet Specialties wheel

After four years at Deluxe, the EH was unveiled at MotorEx 2012 where it scored Best Engine Bay, Best Undercarriage, a silver medal for Innovation and an invite to come back next year. Hard to imagine that three weeks earlier it was a just bare painted shell. The boys hooked in day and night to make the debut. Anthony and Matt had stayed abreast of the build throughout, checking in once or twice a week, but in those final weeks it became once or twice a day. 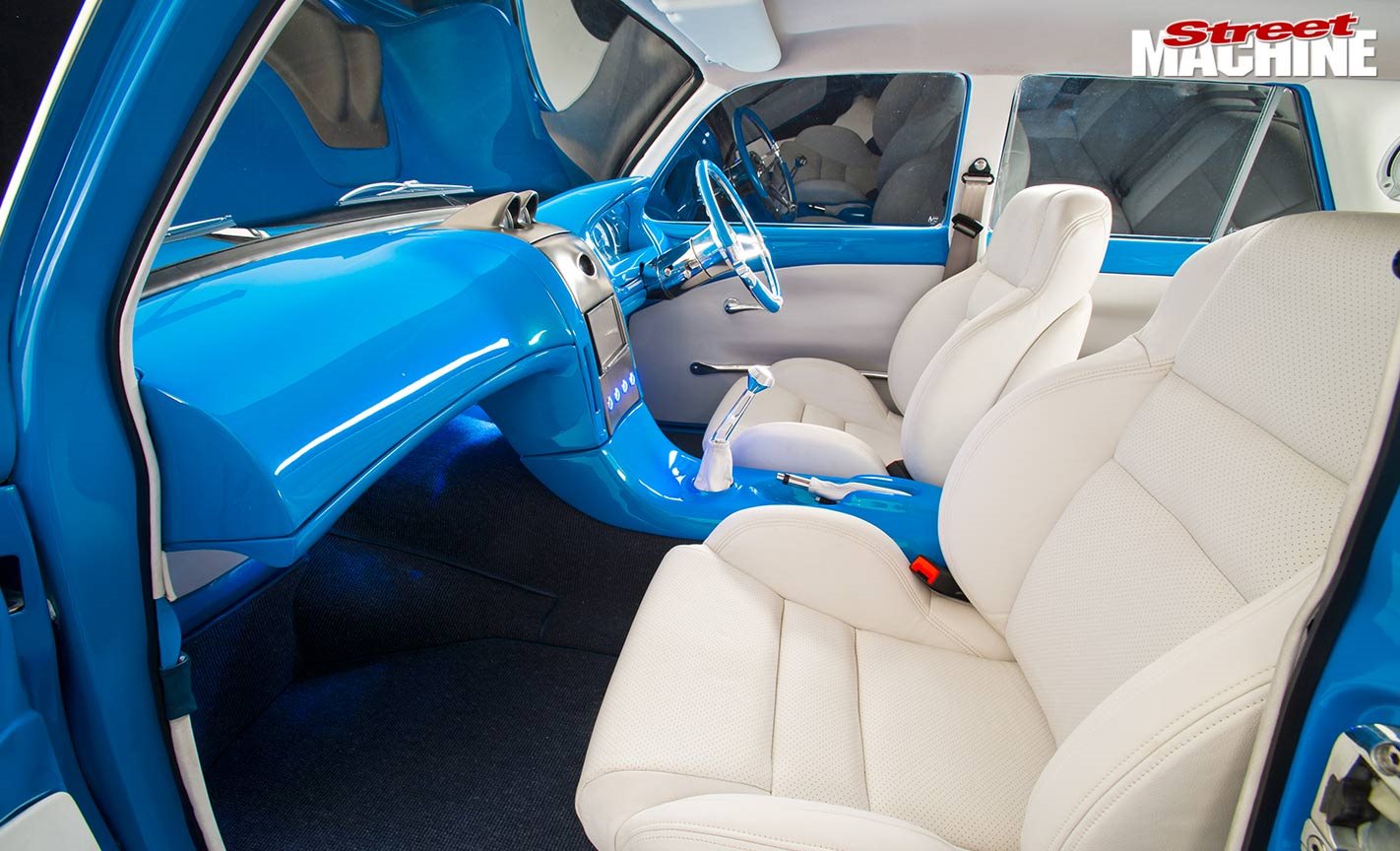 So, was it worth the wait?

“Oh yeah! Steve’s a top bloke and a perfectionist so we’re more than happy,” Anthony says. “It looks better on the ground than up on the stands — you can see the stance of it.

“Now I’m going to have to change my will and make sure the family keeps it forever.” 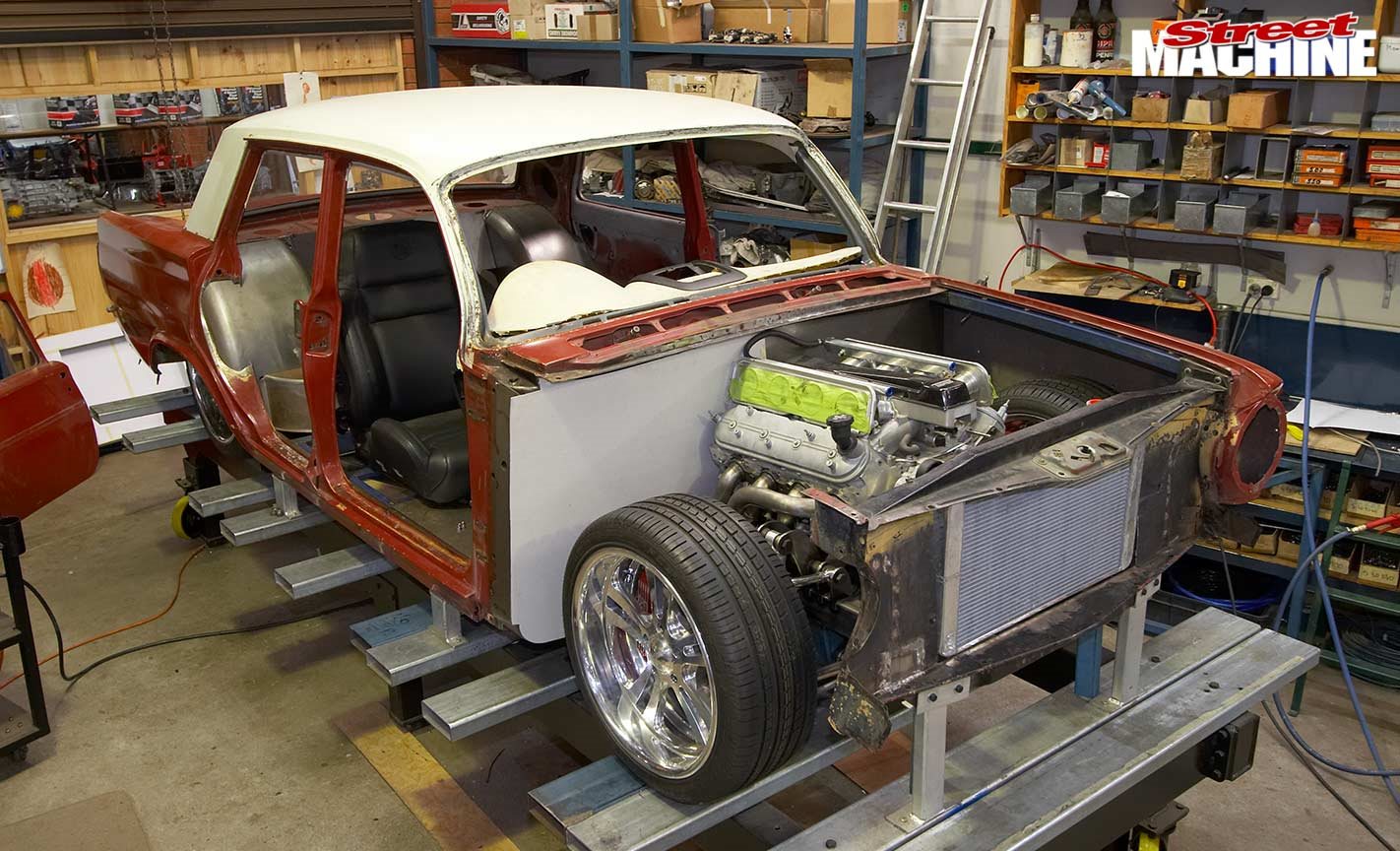 1. The build began at the Castlemaine Rod Shop, with the late, great Billy Musset creating the airbagged chassis and fitting the engine, ’box and IRS diff 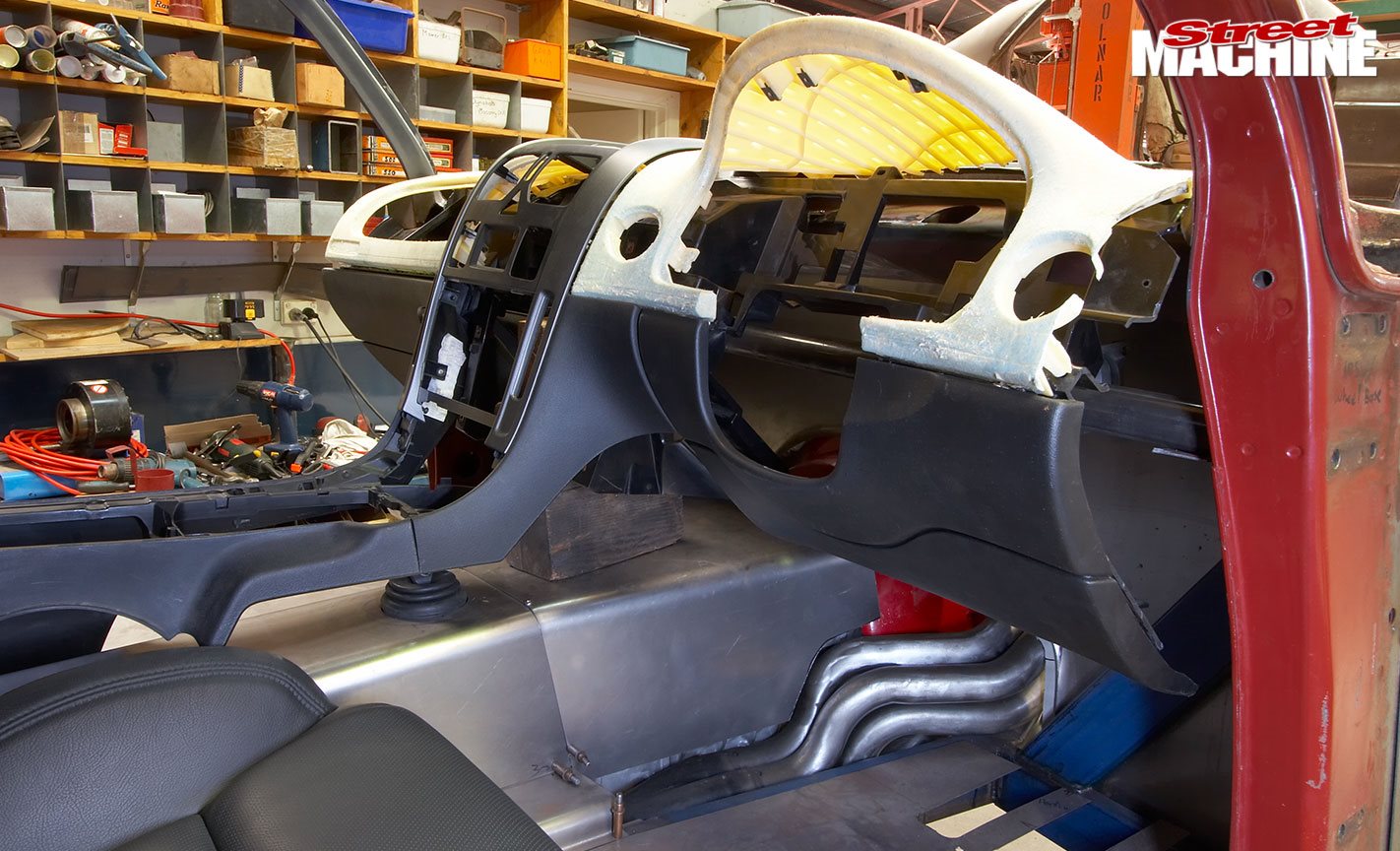 2. Check out the tuned-length headers — not much room in there! The HSV dash was there from the start but the centre section was cut short to meet the custom console 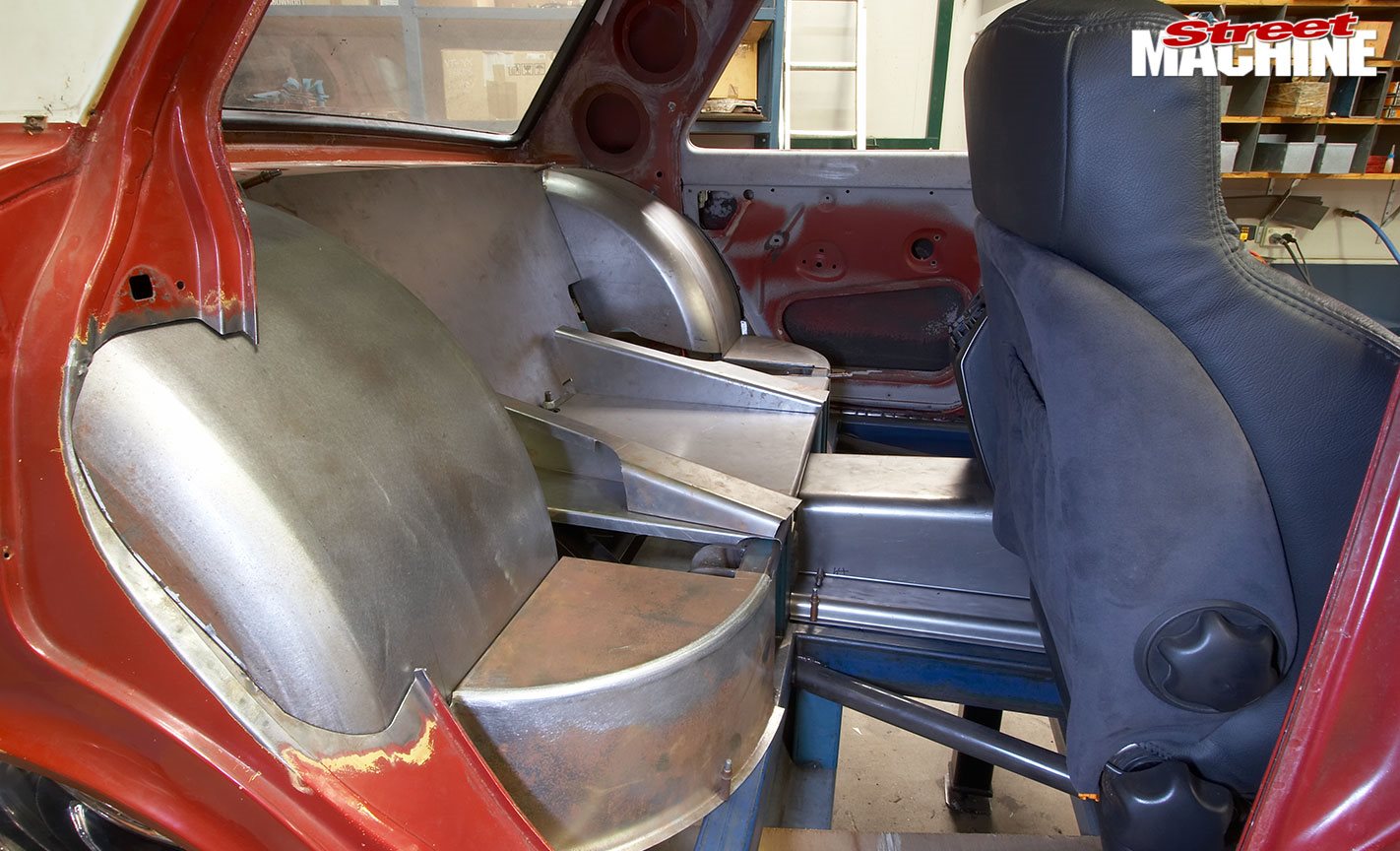 3. The round-shouldered tubs look awesome and roll all the way into the door openings, which meant the doors had to be tubbed too 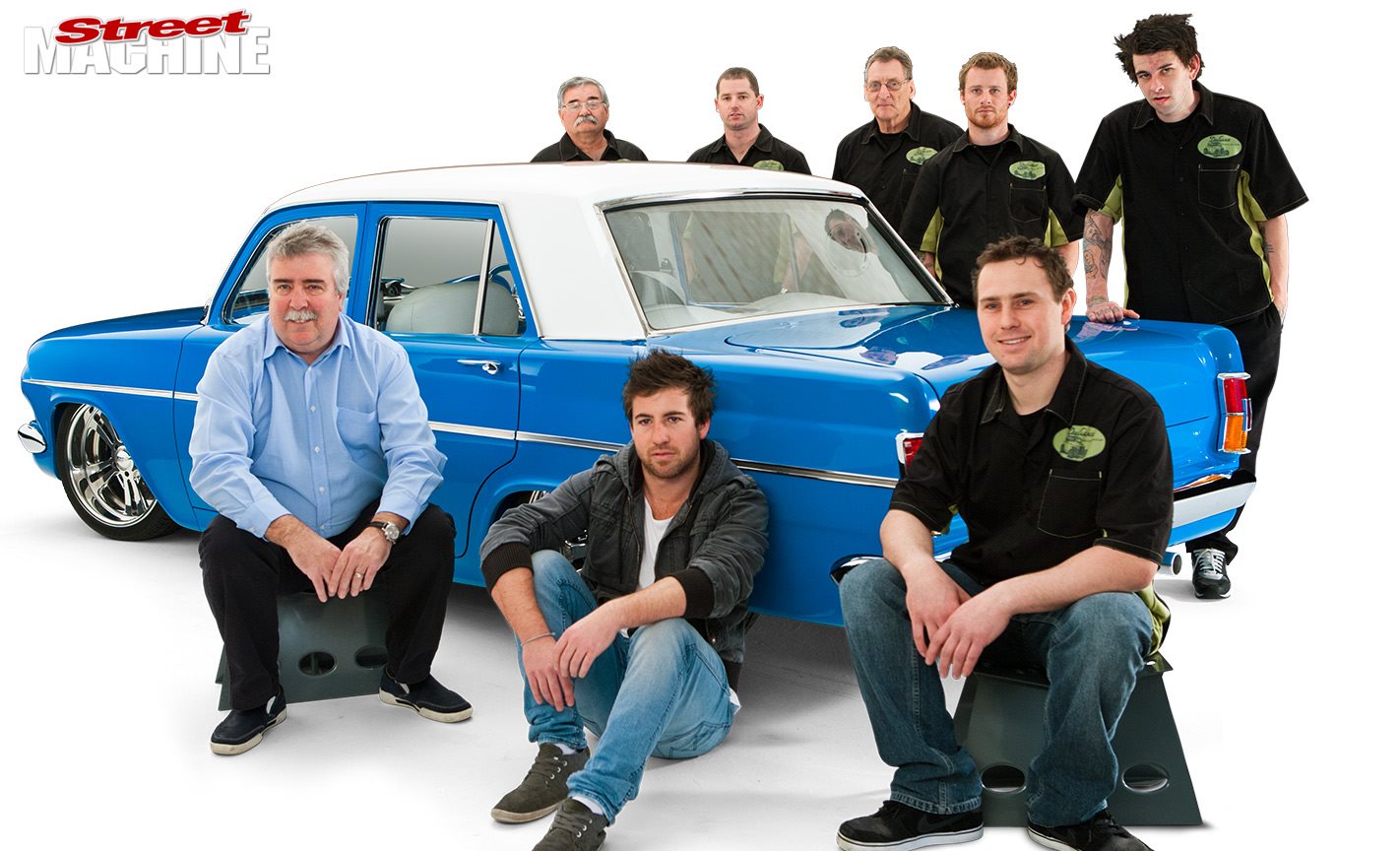