It might look like it came straight off the boat from the USA but Mark Crossley's 1964 Ford F100 is all Aussie and home built. This article on Mark's F100 was originally published in the August 2013 issue of Street Machine

FOR an Australia Post contractor, Mark ‘Binga’ Crossley is a pretty handy panel beater and painter. If the smooth flanks and killer paint on the body aren’t impressive enough, wait until you spy the custom work on the roof.

As you’d expect, it didn’t start off looking this flash: “It was sitting on like a ’75 chassis. I bought another chassis off a mate, which I thought was a ’64 but it turned out it was a ’66 so we had to change the body mounts a little. I bought the tub off another mate and the HQ clip came from someone else. A couple of other mates had done HQ front ends [on F100s] and they were pretty low — that’s why I did it, but if I had my time over I’d put a Jag front in it. You can get them a lot lower.” 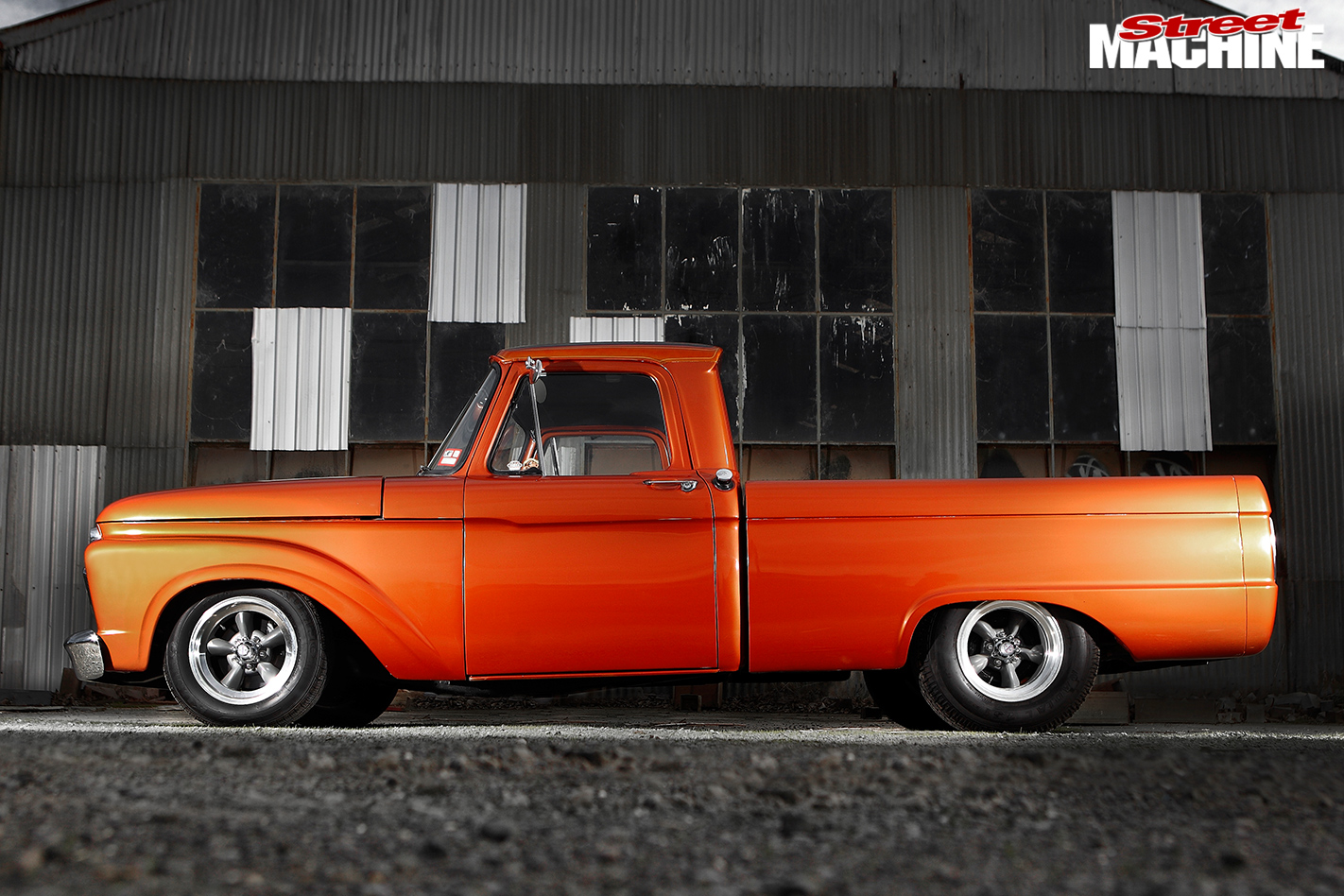 The driveline plan was simple: a mild 351 Clevo, C10 and a drum-braked rear from an XE Falcon. Another mate had an F350 that was just about dead, but the engine had been reconditioned. “It had only done about 5000 miles, was running on gas and had a towing cam in it. It used to tow a boat and the F350 was buggered from the salt water.”

While the motor was in decent nick, Mark discovered it wasn’t exactly as advertised when they pulled the sump. Yep, it’s a 302, but with a lumpy cam, Edelbrock intake and carb, extractors and a twin 2½in exhaust it makes all the right noises. A touch of black paint and a lick of body colour on the rocker covers and air cleaner and the engine was done. 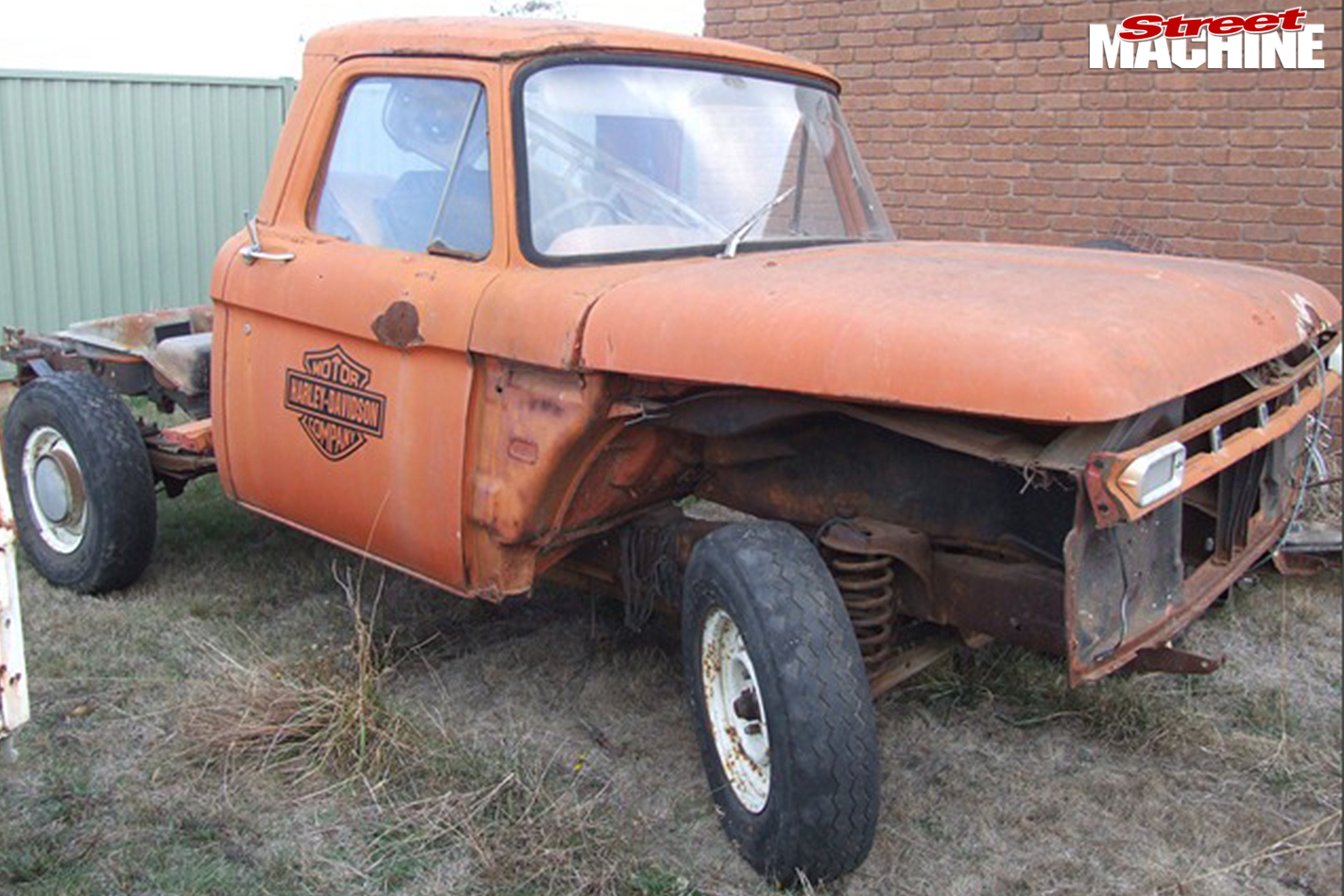 The truck as Binga found it, sitting n a later-model F100 chassis and with a good bit of rust in the roof cap area

With the engine mounted and the HQ front-end grafted on, it was time to sort out the rear end.

To get it where he wanted it, the rear chassis needed a C-notch. “I wanted it as low as Jeem’s [US hot rod artist Jimmy Smith] F100 but the only way I could do that would be to step it in the back and I didn’t want to lose the space in the tray.” 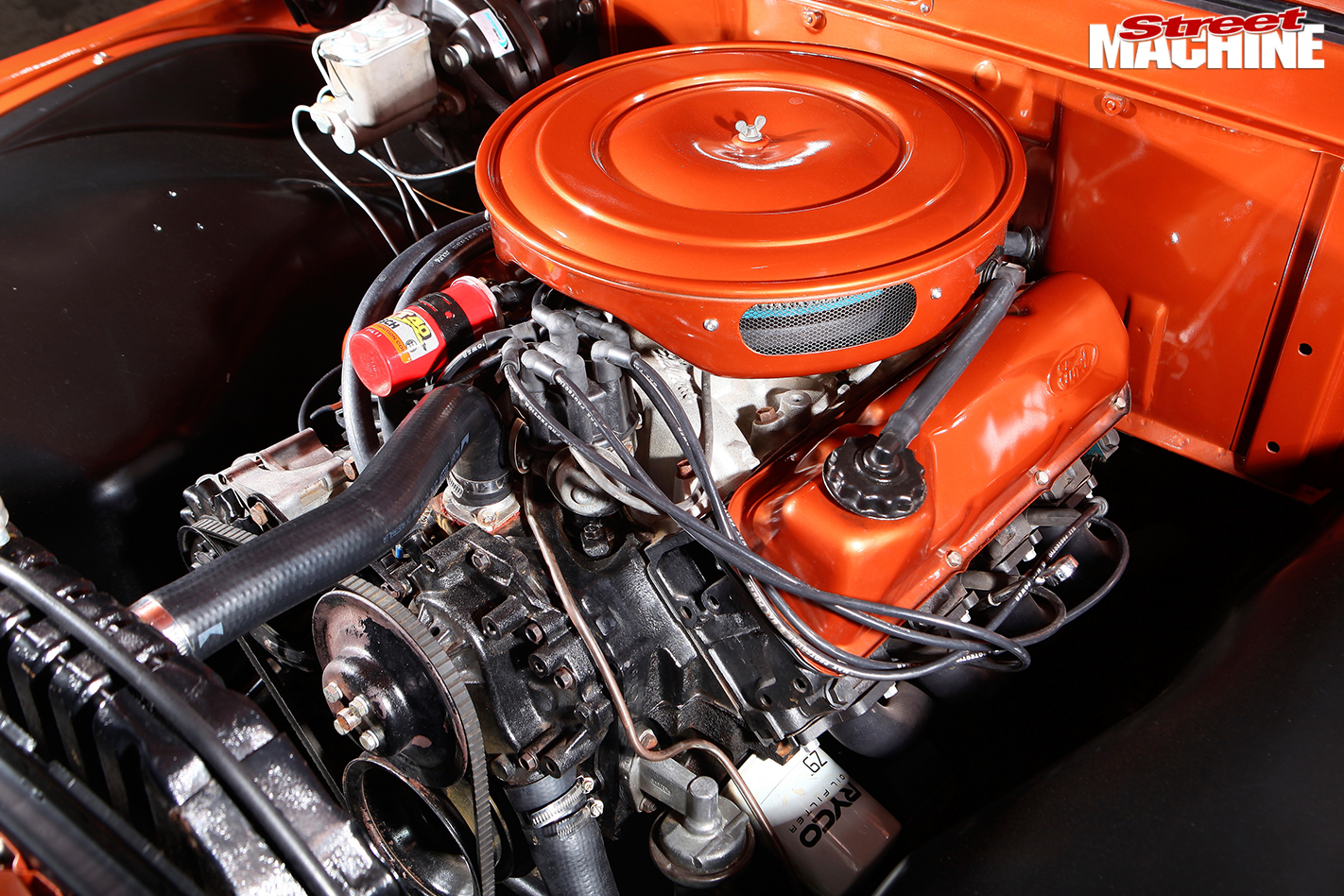 Even though Mark boxed the chassis after notching it, the engineer wanted extra plates added top and bottom to restore the chassis to its original strength. Probably overkill but better safe than sorry, and with all the cutting and shutting completed, the chassis was sent to the sandblasters, then treated to a coat of chassis black. 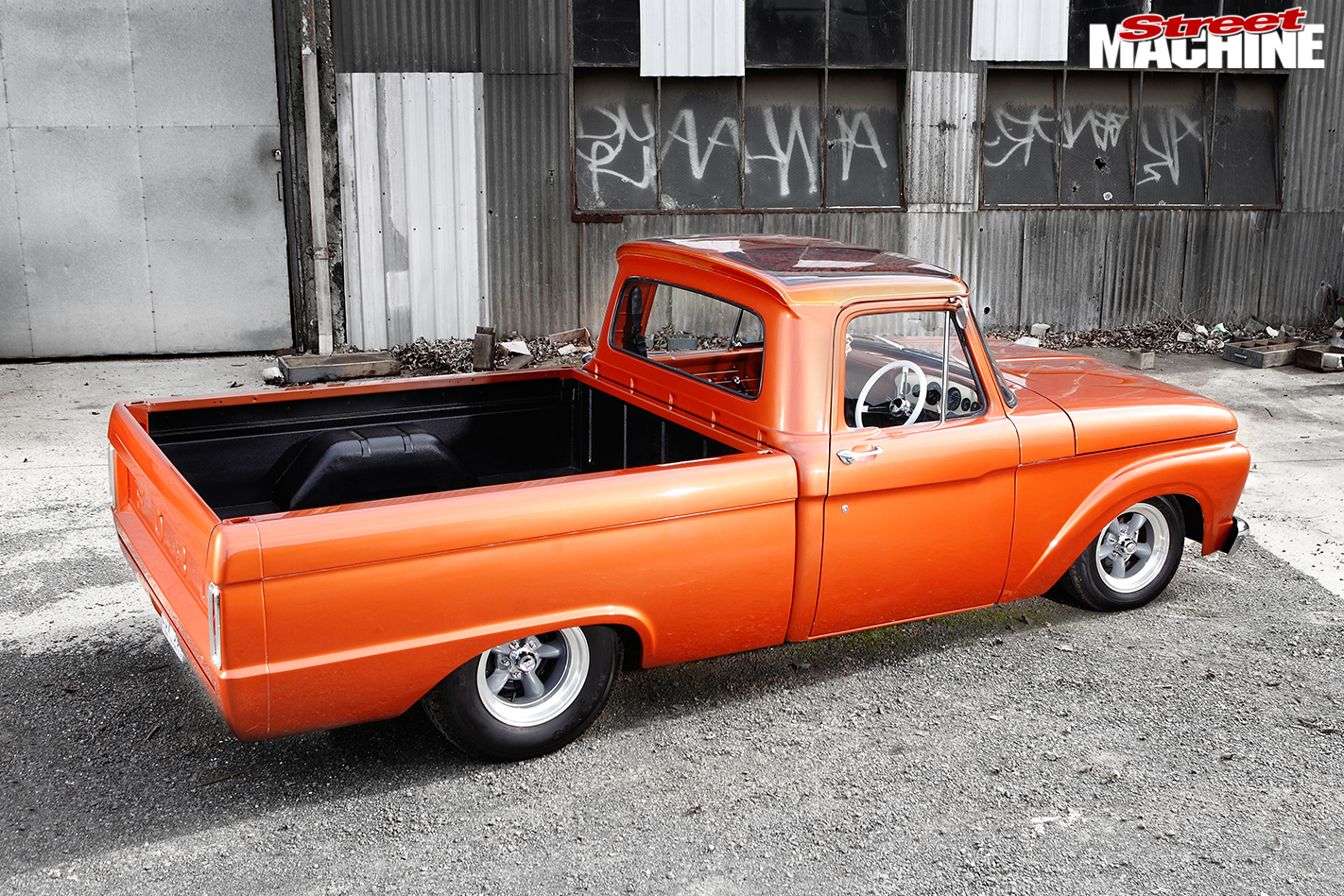 Then the fun began on the body. There was a bit of rust around the drip rails, so new sections were welded in, with station wagon drip rails. A little more rust was found at the rear of the body near the chassis, on the leading edge of the bonnet, and in the left-hand door, which needed a new lower skin. Mark did the work himself — with help from good mate Gerald Clancy at Gnome Rods. “He told me what to do and kicked my arse when I got it wrong,” Mark explains. 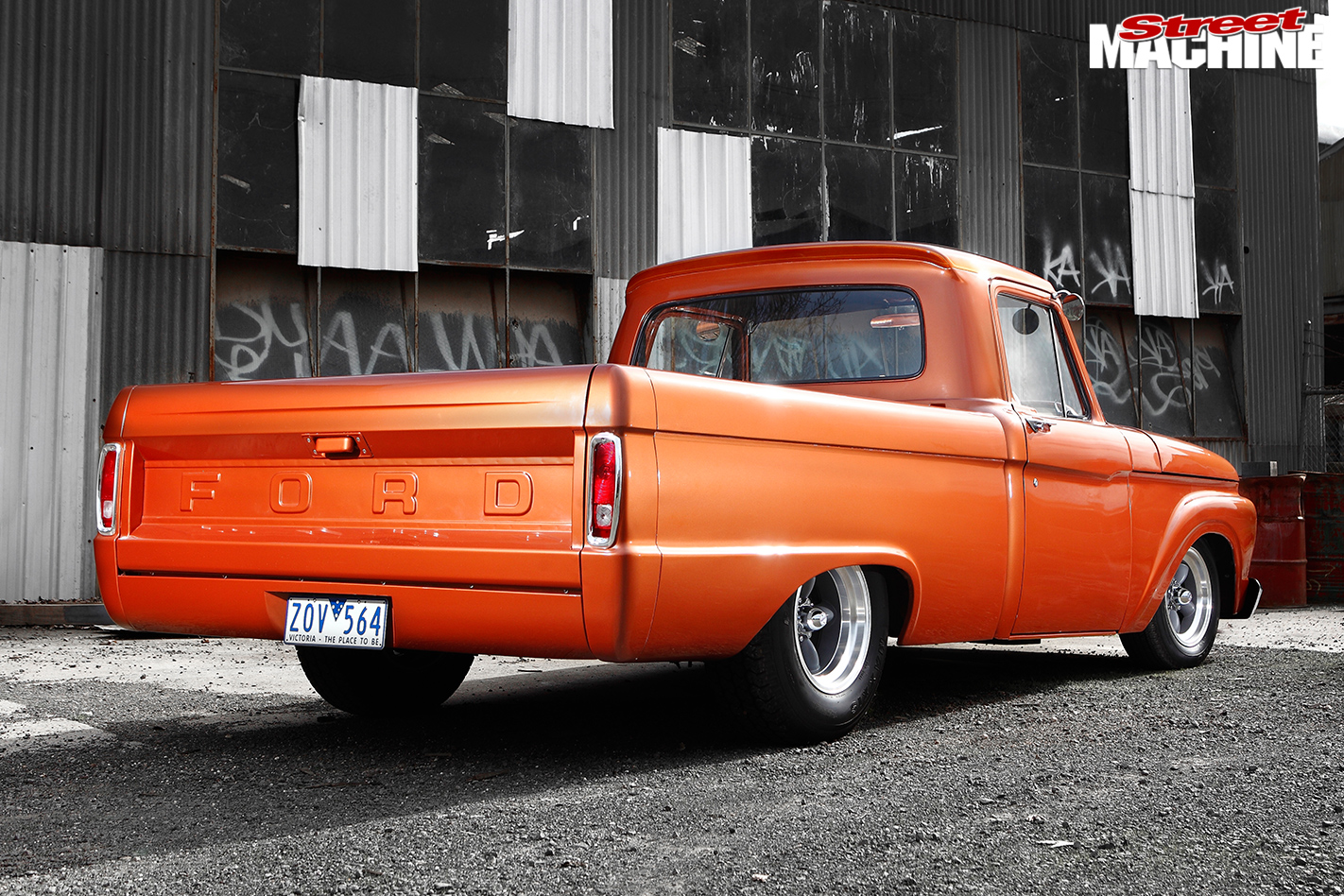 After filling, sanding and blocking until he had no fingerprints left, the body was ready for paint. He knew what he wanted but like many paint plans, it didn’t work out as intended.

“I bought four litres of mis-tinted paint off a mate thinking it was roughly a red oxide colour but when I stirred the can there was all this gold pearl in it — it got fancier pretty quick! When I went to get more paint from the same place, the guy said: ‘I’ve got no idea what this is.’ We went through all these colour charts but he just colour-matched it as best he could, tossed it all in a 10-litre can and mixed it up. 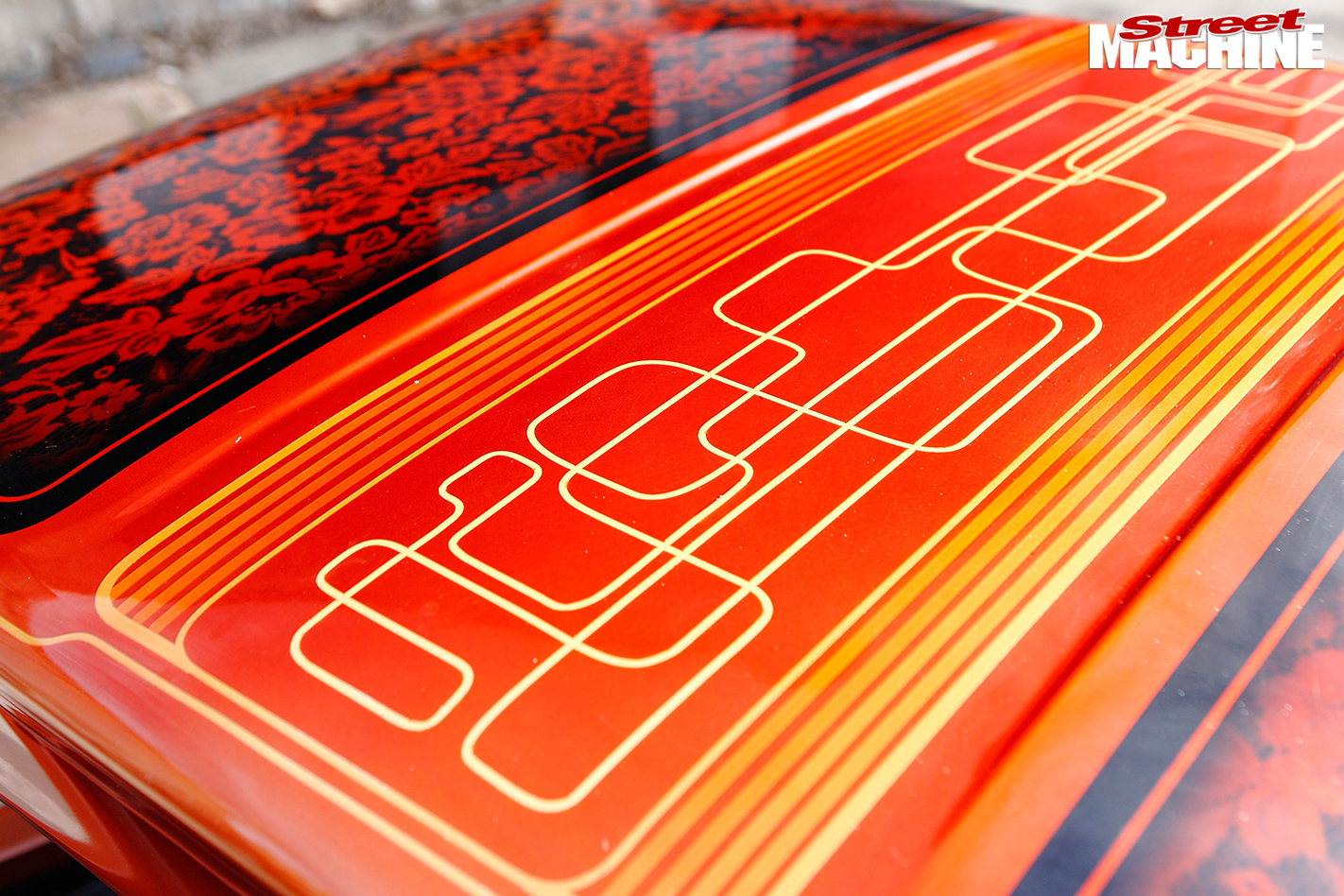 “I’ve used the spray guns at Gerald’s a fair bit, to paint a guard or something like that, but I’ve never painted a whole car before. It was going to be satin until I decided to sell it, so I made it a little bit prettier.”

What Mark ended up with is a custom bronze metallic. The body was done in Euracryl acrylic while the roof is PPG two-pack. He stepped way out of his comfort zone with the roof, performing full custom panel paint. 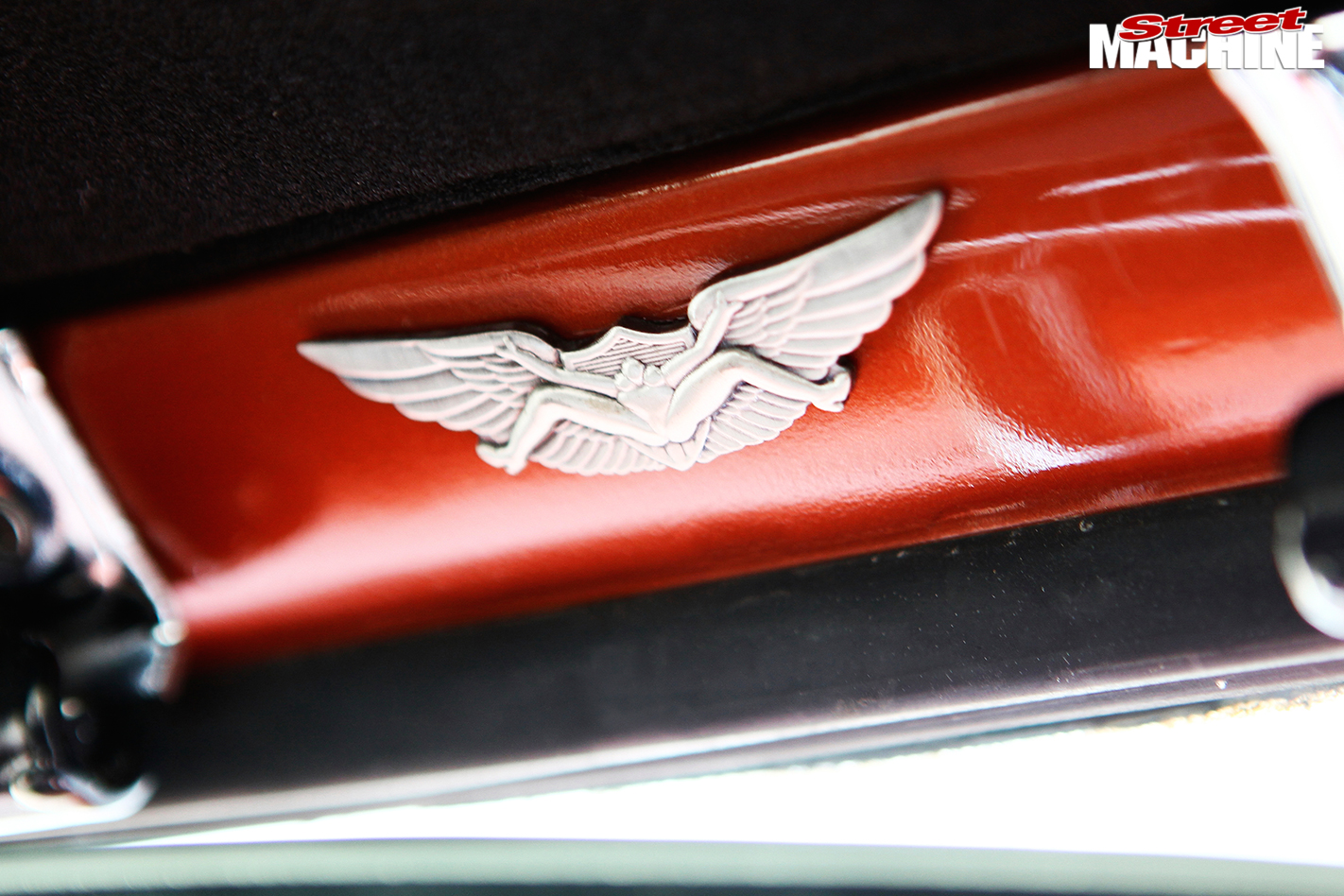 “I was trying to get the roof a similar colour but I didn’t know how many coats to put on and I was running out of candy, so what it got is what it got. I did the metallic gold base, then I did the lace in black, then we did all the lines in pinstriping tape and put the first two coats on and then started pulling the centre lines out. I pulled one lot of tape off each coat until I’d finished, so the straight lines are all slightly different shades and the endless line in the centre is the original base coat,” he says. 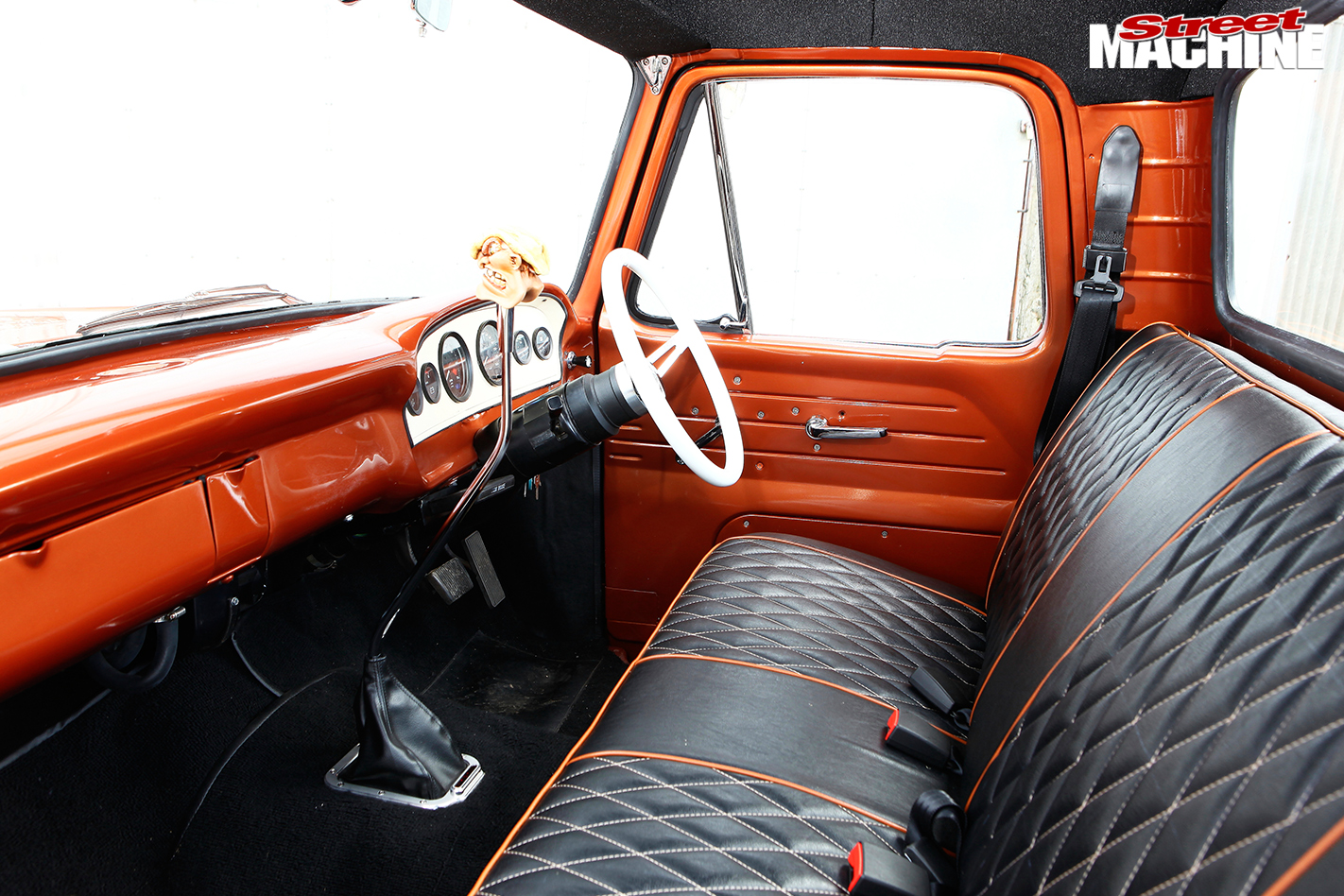 Inside, the cab looks low key but there’s a fair bit going on. The stock bench seat was lowered a couple of inches and slimmed to get the driver lower, then a diamond pattern was stitched into the black vinyl, with piping to complement the paint. It’s a nice change from your basic tuck and roll and really suits the overall style of the truck.

The dash was smoothed, with most of the switchgear moved to the XE Falcon column, while a Moon steering wheel was added to nail the 60s vibe. Mark even scored a free set of Jag gauges. 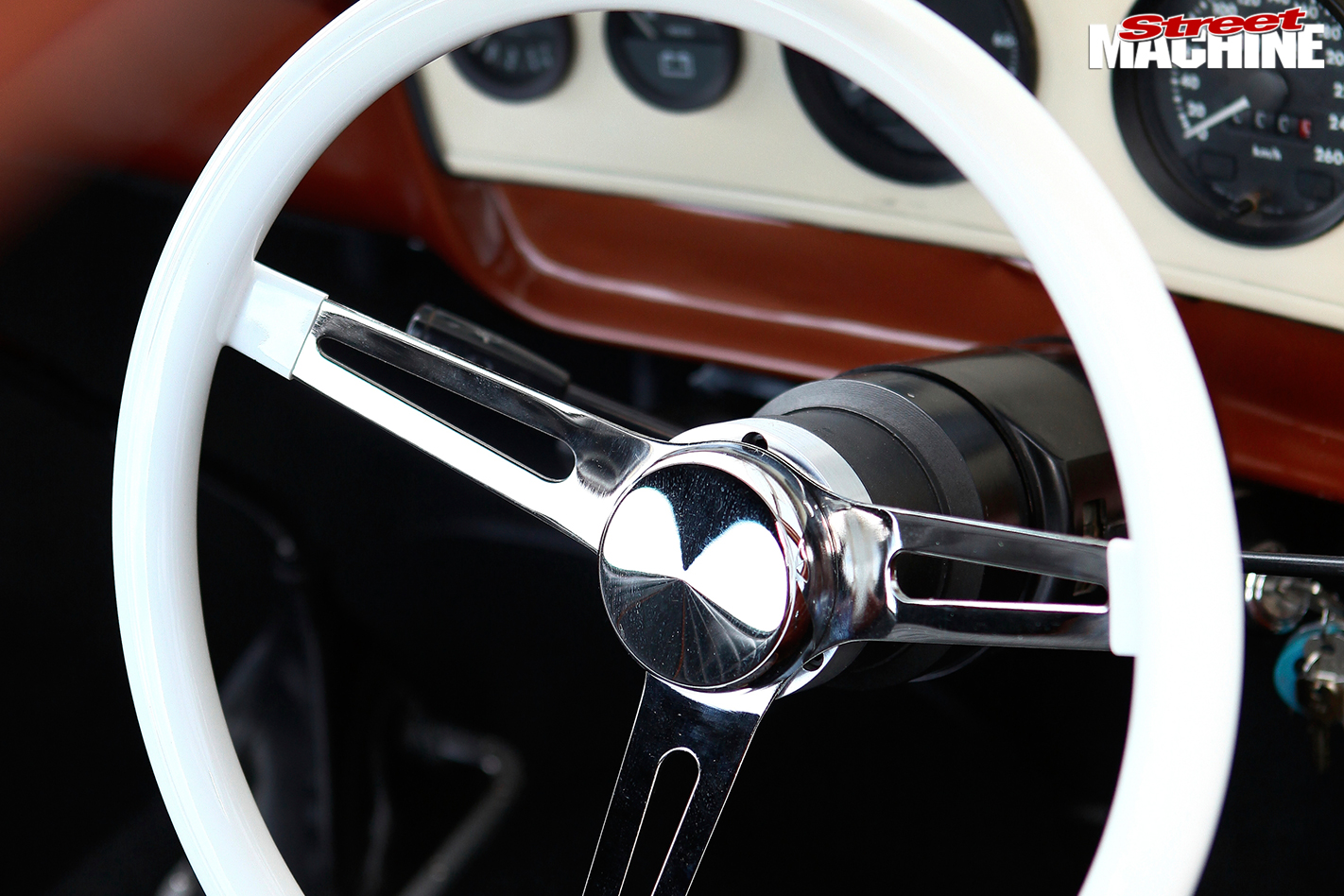 “Those ‘free’ gauges owe me about $900 so far! They were from a V12, so I had to have the tacho converted to V8, then I had to buy all the senders, and you need an electronic sender to run the speedo, so I had to buy an adapter. Two days after I got it registered the speedo stopped working!” Ah, British electrics! 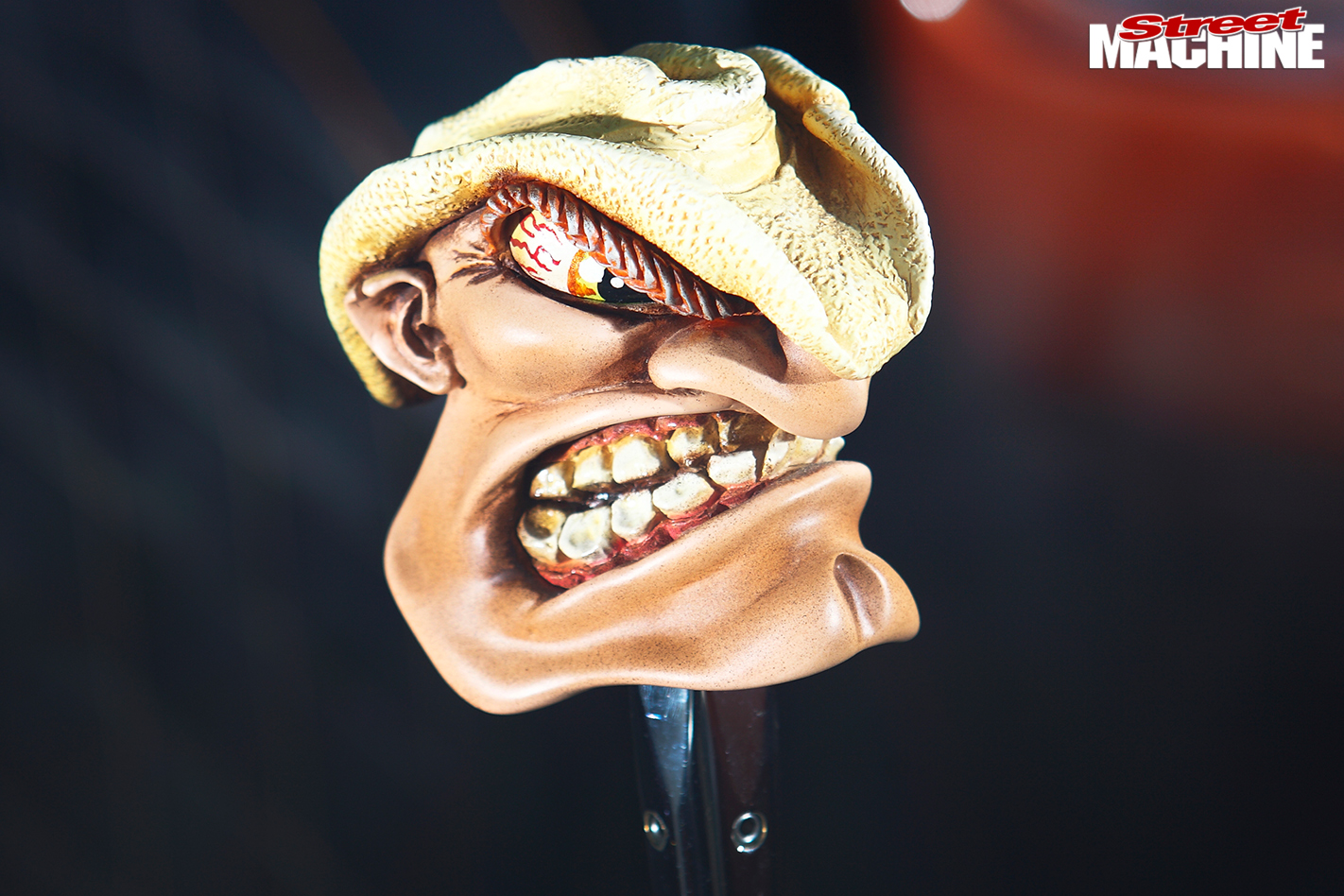 It looks like it came out of California in the late 60s, but this was home-grown, homebuilt and about as cool as they get. And it’s for sale as Mark’s got a ’54 F100 waiting its turn. 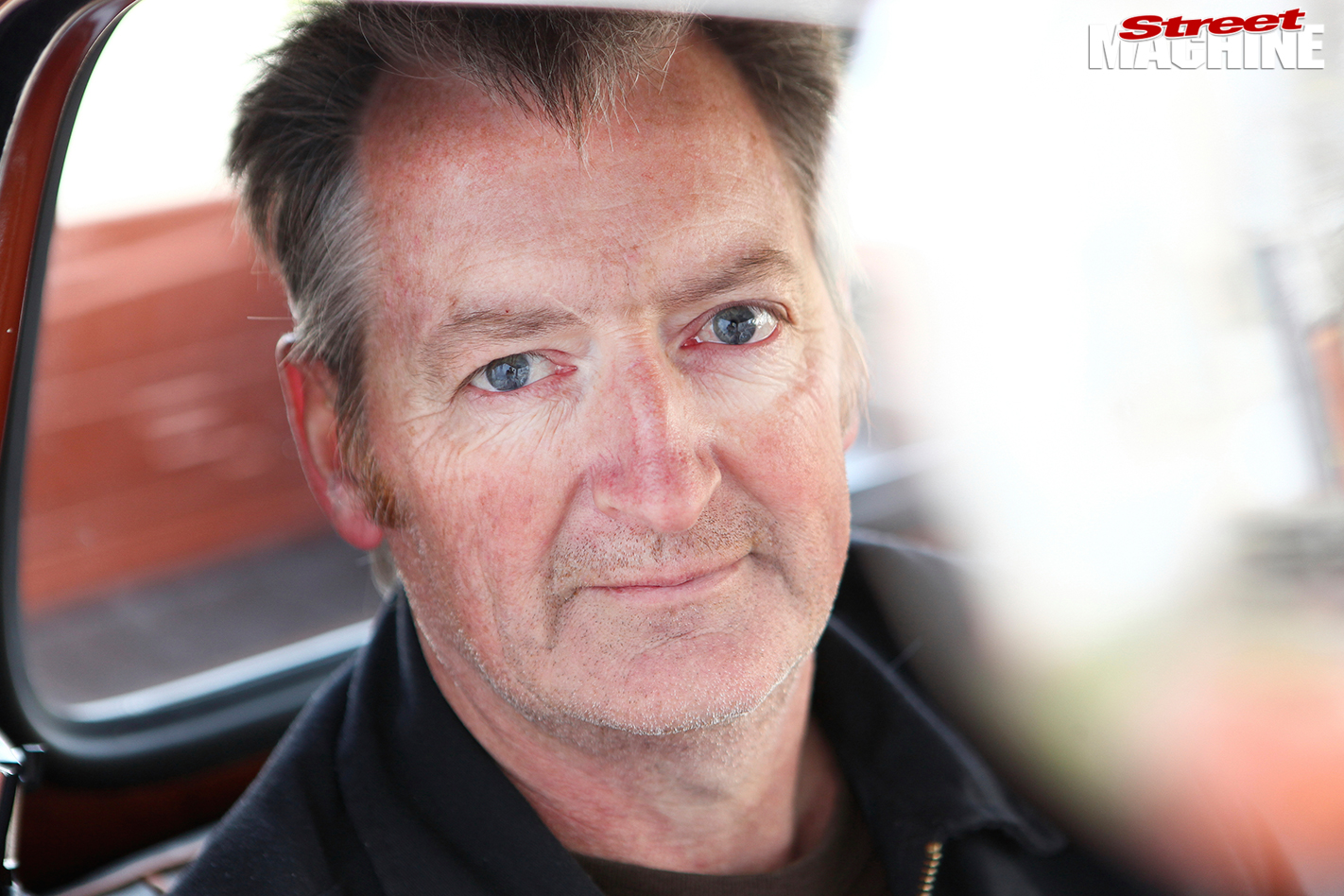 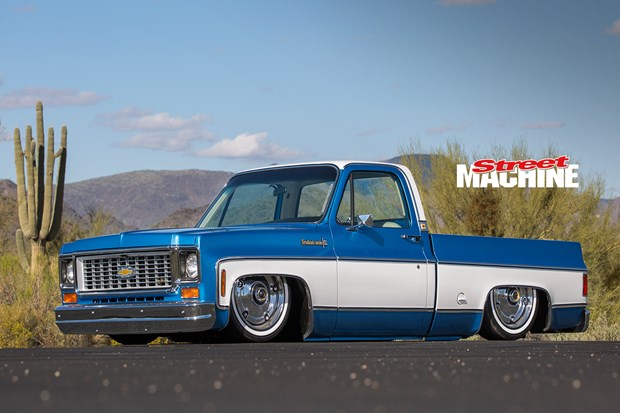