WE ARE in safe hands. It’s a golden era for street machining in Australia and there’s a vast amount of young talent securing our sport for future decades. Case in point: 26-year-old Brad Pizzi and his Summernats Top 60 and Top Van-winning EH pano. What you see here is a car built near-wholly in the home garage and stands as a testament to what can be achieved when dedication and vision come into play. 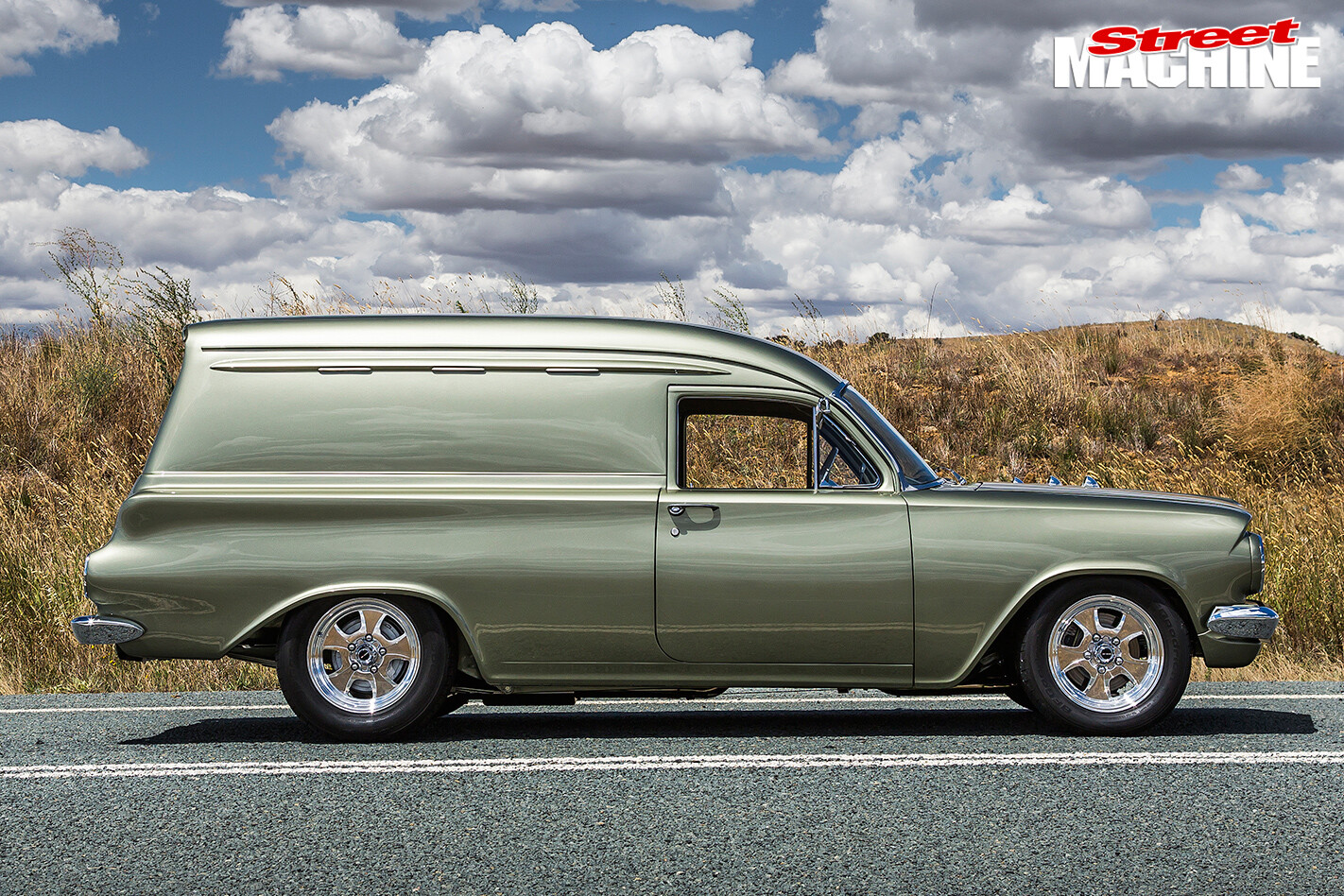 “This project was a huge family affair,” Brad explains. “I restored my grandfather’s EH ute at 15 and now the whole family is EH mad! My mum, dad, sister and brother-in-law all have drivers and projects on the go so we pitch in and help each other out.” 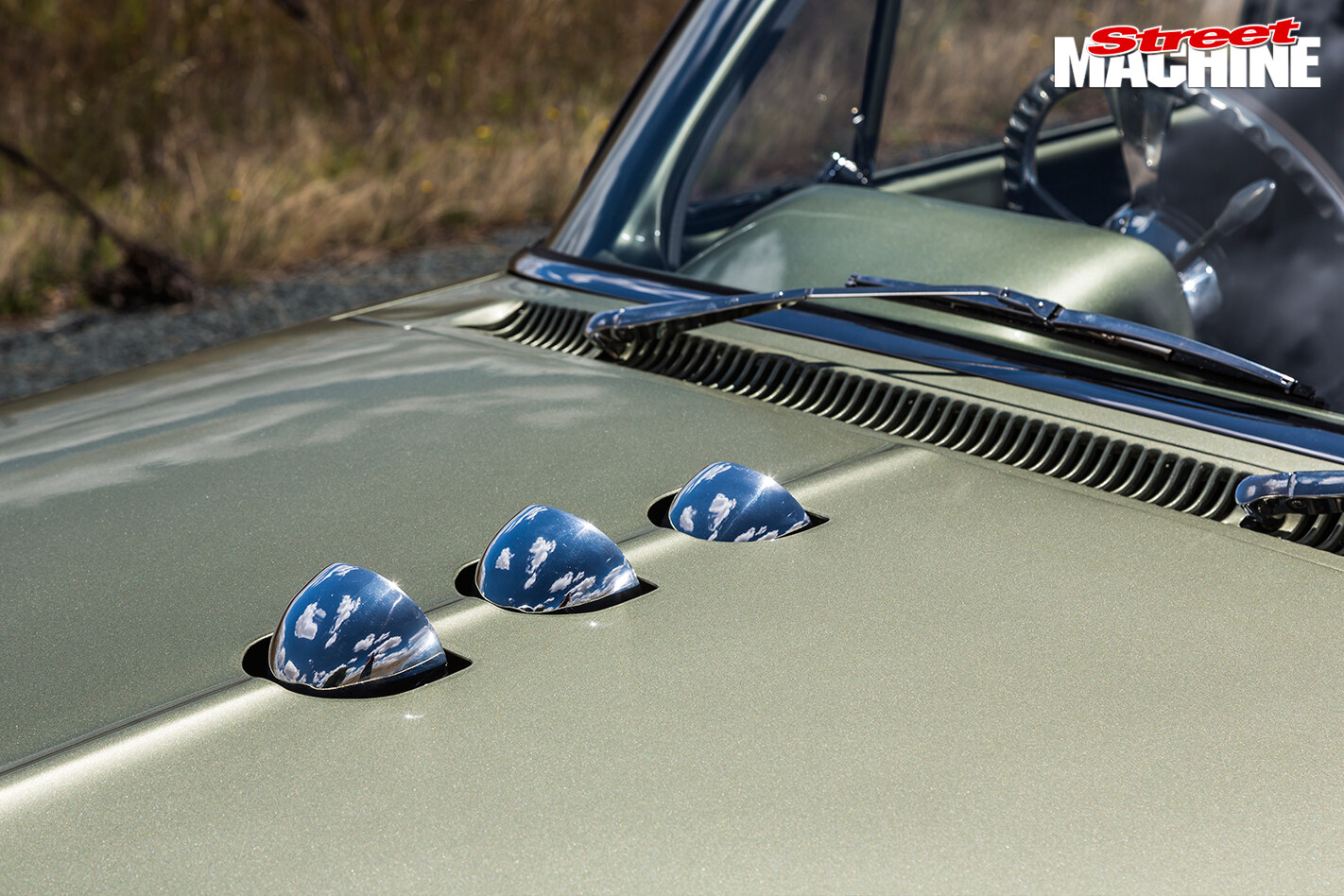 And don’t for a second think Brad was kept busy making cups of tea and wire-brushing bolts while everyone else toiled away – he is an ace fabricator and welder, and the hours of metalwork invested in just repairing this van borders on OCD. The EH was bought sight unseen off eBay – yep, you know where this is going. It looked tidy in the photos, but just like internet dating, sometimes the pics don’t match the reality. The bog was up to an inch thick in spots, and it’s easier to list which panels didn’t need replacing: the right rear quarter and bonnet, although they still required rust repairs. Yes, even the plenum was swapped out and the complete turret peeled open like a can of sardines and replaced with a donor item. So why did Brad persevere? “Well, an EH is twice my age and the pickings are slim for decent projects, especially windowless vans,” he says. “I’d already invested enough money into this, so I pieced it back together using metal from other cars that were otherwise stuffed.” That’s a fair call, and very telling of Brad’s dedication – and dedicated you need to be when you’re talking about replacing van quarter panels and the aforementioned roof tin. EH vans have great style even in factory form, so Brad felt there was little required to improve on its general visuals. “The spare wheel door was blended to the rear pan and the B- and C-pillars were filled and smoothed on their inner surfaces to improve on the ‘commercial’ element of their design.” With all repairs and modifications sorted, Brad whipped out the spray gun and lavished the EH in Martini Metallic from the ’03 Calais/Statesman charts. “I wanted something different from the factory EH colours but still needed a look that was era-correct and wouldn’t date. I’m not a fan of black undercarriages and hate stone guard with a passion, so I went to town finishing all of the underbody and area below the cargo floor in matching two-pack.” 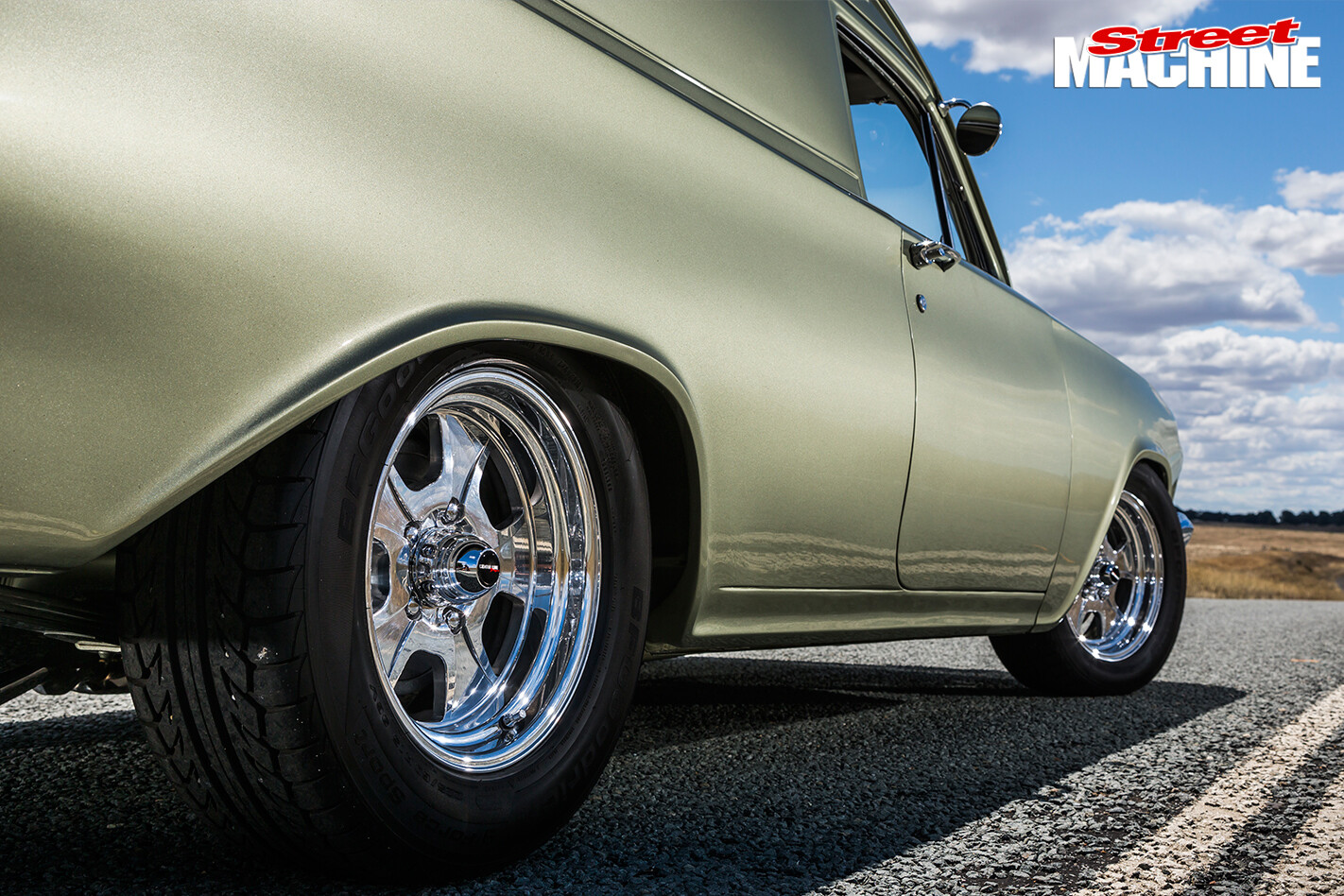 With the bulk of the hours done, Brad and company turned their attention to the powerplant and driveline. “We decided on a V8 conversion early on, so we replaced the factory transmission tunnel with the larger version from an automatic car, and modified an HQ sump for clearance.” The red 308 was built to L34 specs by Brad as a sensible compromise between performance and reliability. A Lunati hydraulic cam is the only deviation from the L34 path, its specs better suited to the other glaring anomaly – a trio of Demon two-barrel carbs. “I was keen to try something different in the engine bay to add a ‘hot rod’ feel to the build,” Brad says. “It shows that you can mix old and new styling cues if you keep it subtle and stay true to your overall vision for a project.” A Turbo 350 makes excellent use of the newfound tunnel space and was treated to a shift kit and 2500 stall converter, with shifting duties sorted via a cable-operated column shift. Brad-built headers balance out the visual appeal of the carb trifecta, and connect to a twin 2.5-inch exhaust. 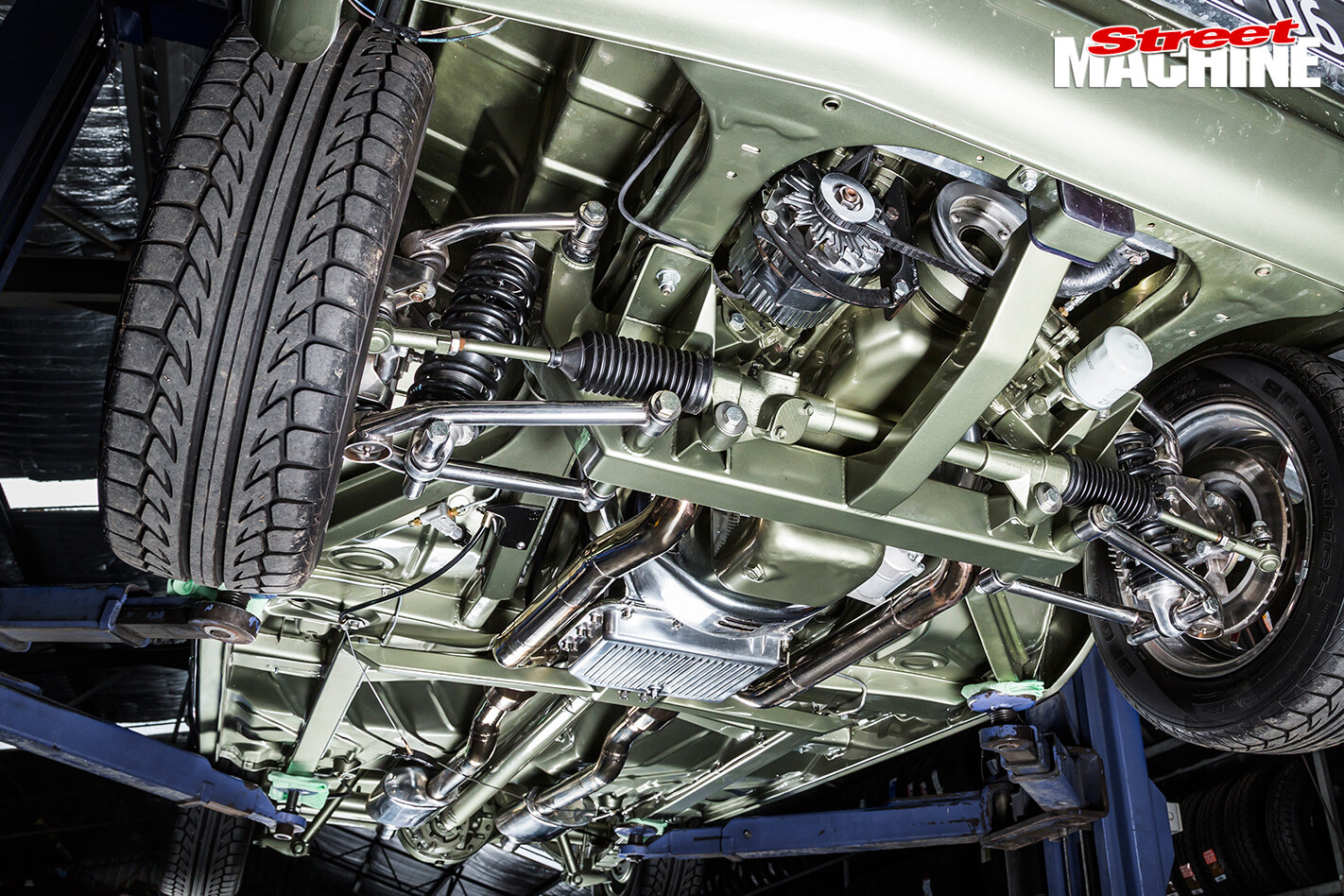 Underneath, a Rod-Tech stainless adjustable independent front end was chosen for added bling and provides modern benefits by way of coil-over shocks and rack-and-pinion steering. Down the back is a nine-inch housing filled with 3.0 gears, 31-spline axles and a Truetrac centre, resting on re-set leaf springs. Braking is much healthier thanks to a mix of Commodore discs up front and HQ rear drums, working on seven- and eight-inch-wide Center Line Vintage billet rims kept at 15-inch diameters as a nod to the more traditional era, shod with BFG tyres all ’round. 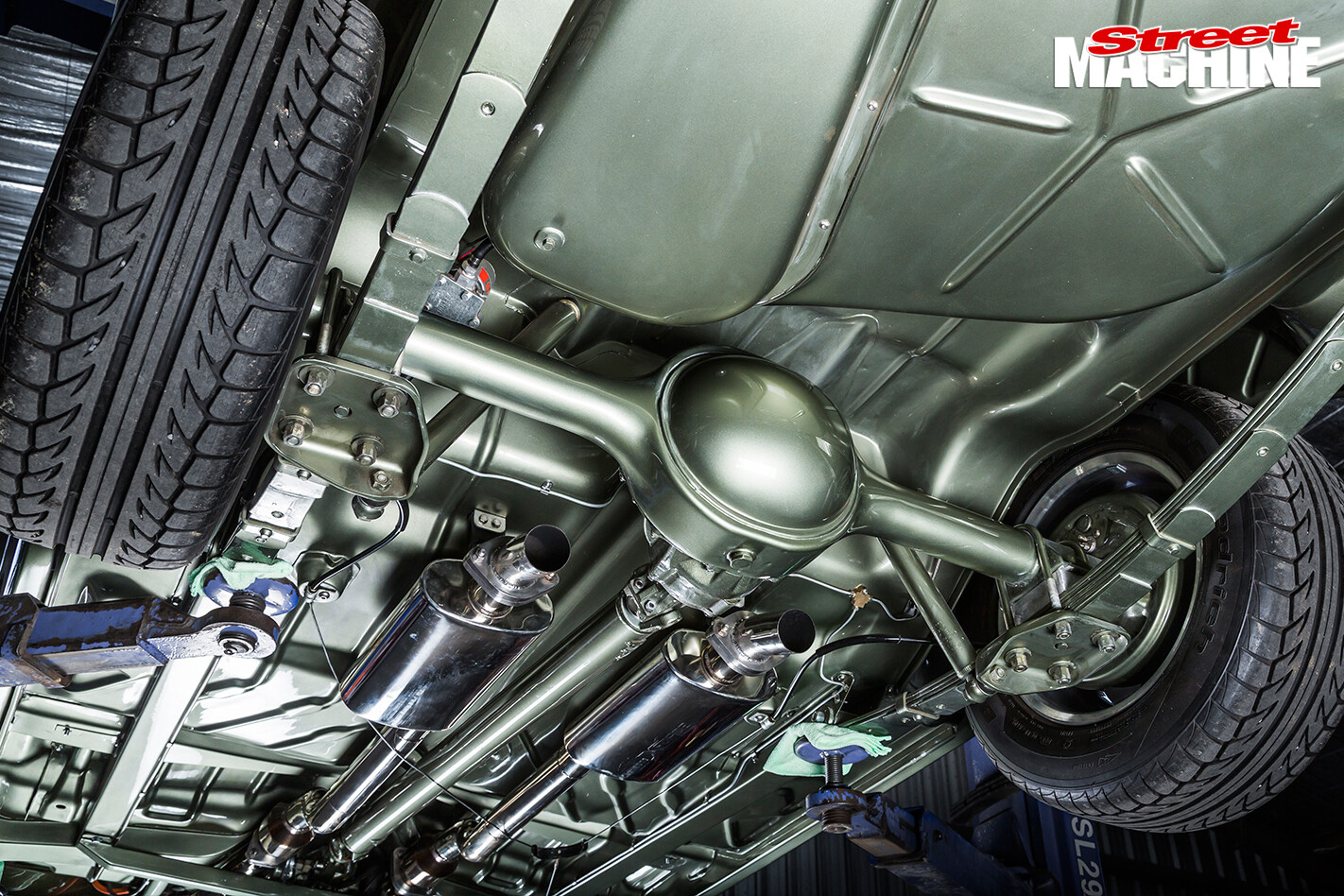 The interior was by no means an afterthought and is as perfectly executed as the rest of the build. A custom bucket-bench seat was fabbed by Brad using an EH base with XF Falcon backrests and centre armrest, before being trimmed in fawn vinyl by Blackneedle Automotive Upholstery in Penrith. A fabricated dash fascia houses vintage-style Auto Meter gauges, which sit comfortably with a Billet Specialties twirler in another successful melding of old and new design influences. 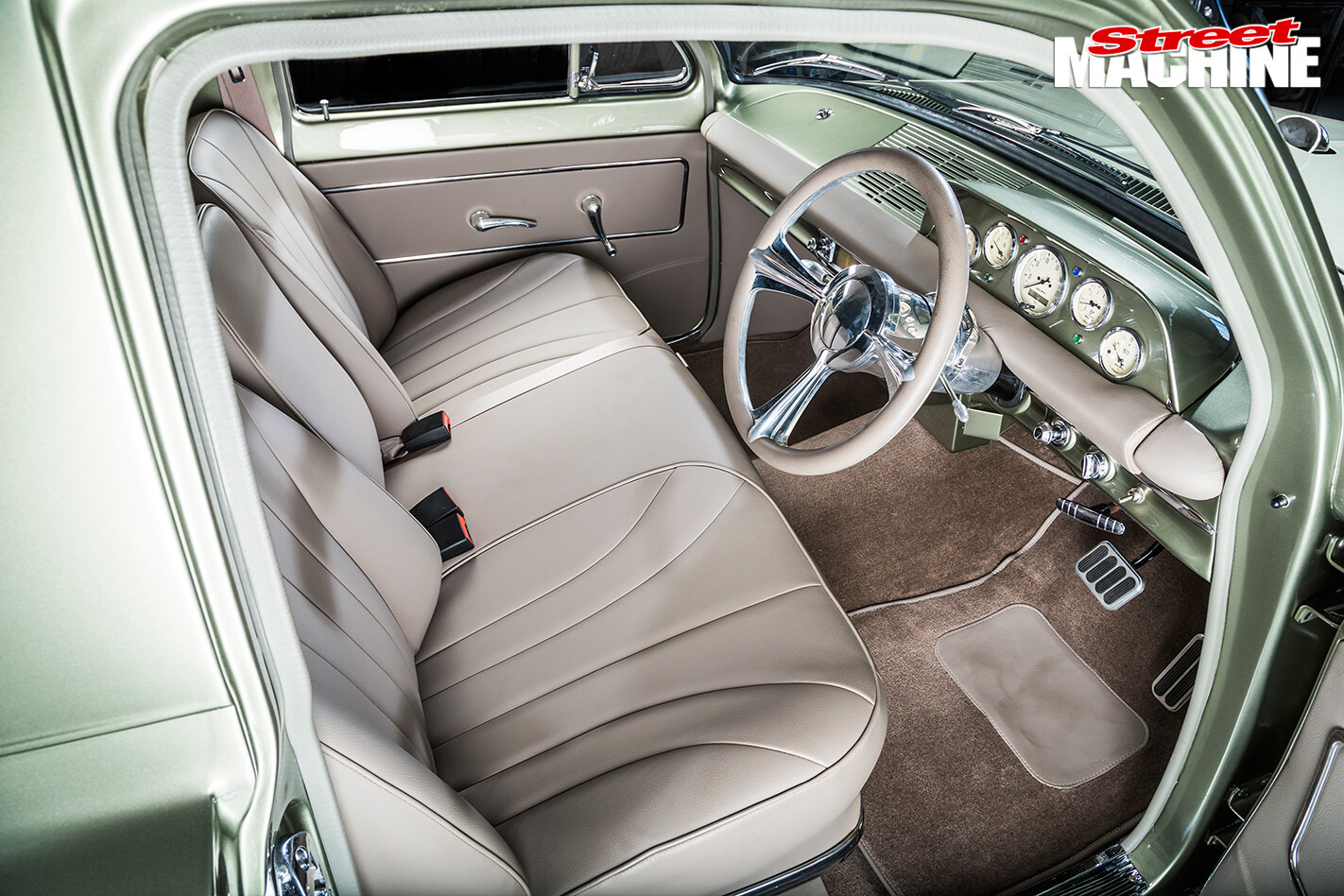 Pop the tailgate and there’s nary a thread of crushed velvet to be found – Brad’s van sticks to a more commercial theme using painted side metal matched to a full headlining and vinyl-clad floor inserts. “When you can see both sides of the same metal panel there is nowhere to hide; the quarters had to be perfect inside and out, while the extra fawn trim adds contrast and useability to the space.” 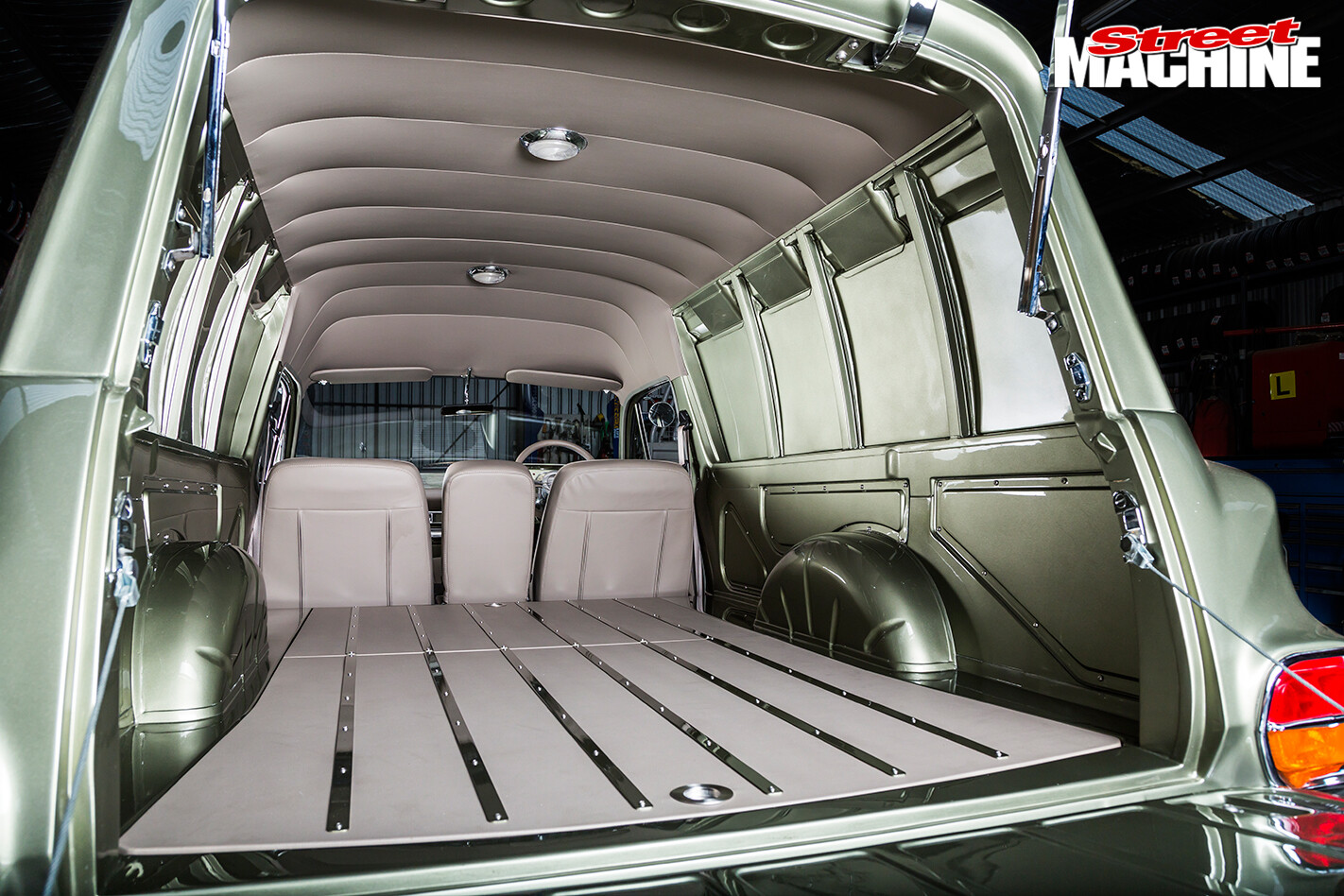 The EH was engineered and registered in the nick of time for the EJ-EH All State Run held at Surfers Paradise last year, covering the 2500km round trip from Brad’s hometown of Wongarbon, NSW, without a hitch and copping plenty of stick in the driving events. 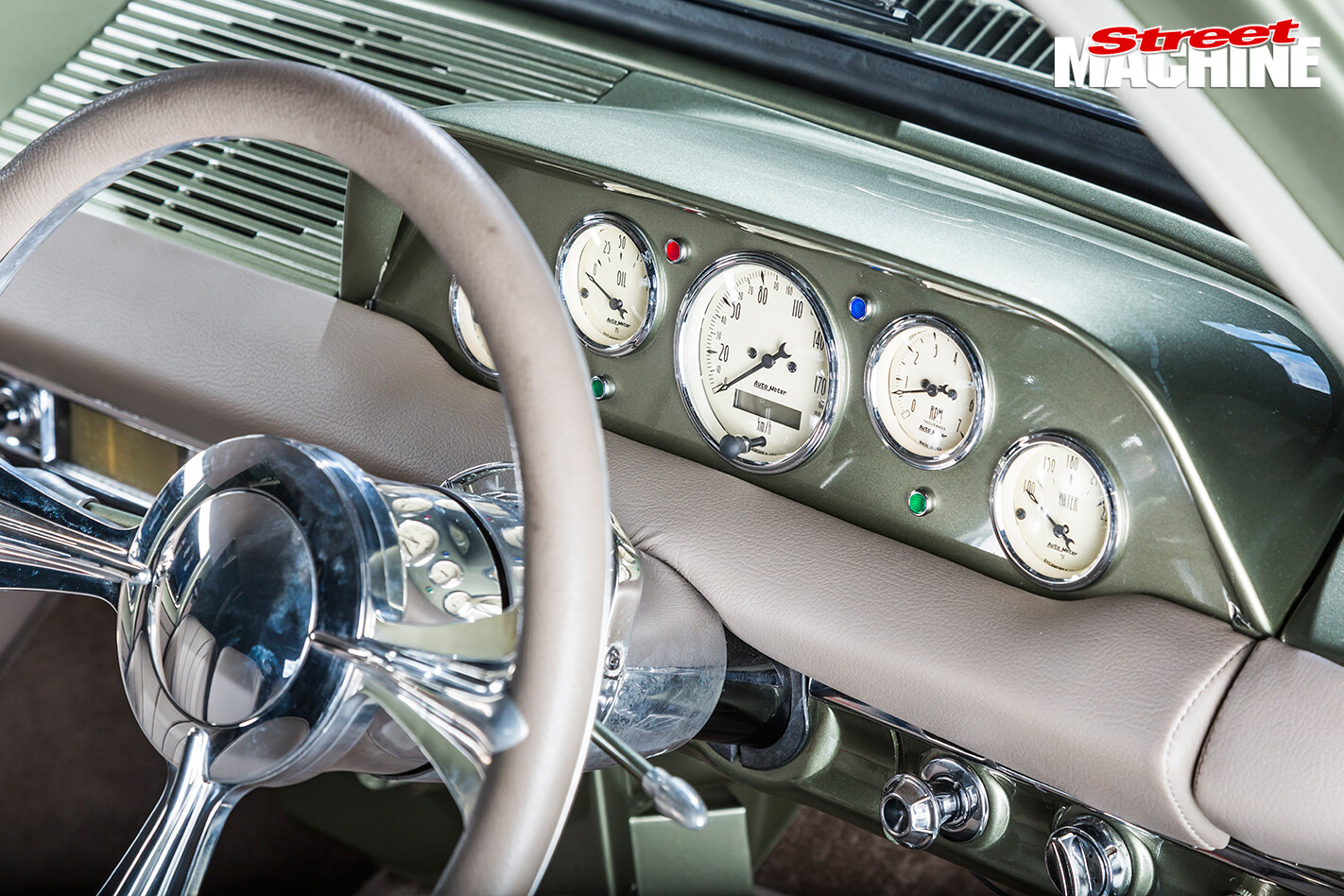 “I drive it heaps,” Brad confirms. “Summernats Top 60 was always a dream of mine, so now we’ve got that sorted it’ll be clocking up even more miles. I love cars that still look the same 25 years later, so nothing will change or be redone that isn’t general maintenance. I still have the EH ute and am building a sedan as well, so will use that as a test bed for new ideas. People are horrified when they see how much work went into repairing this shell, but I genuinely love the challenge.” 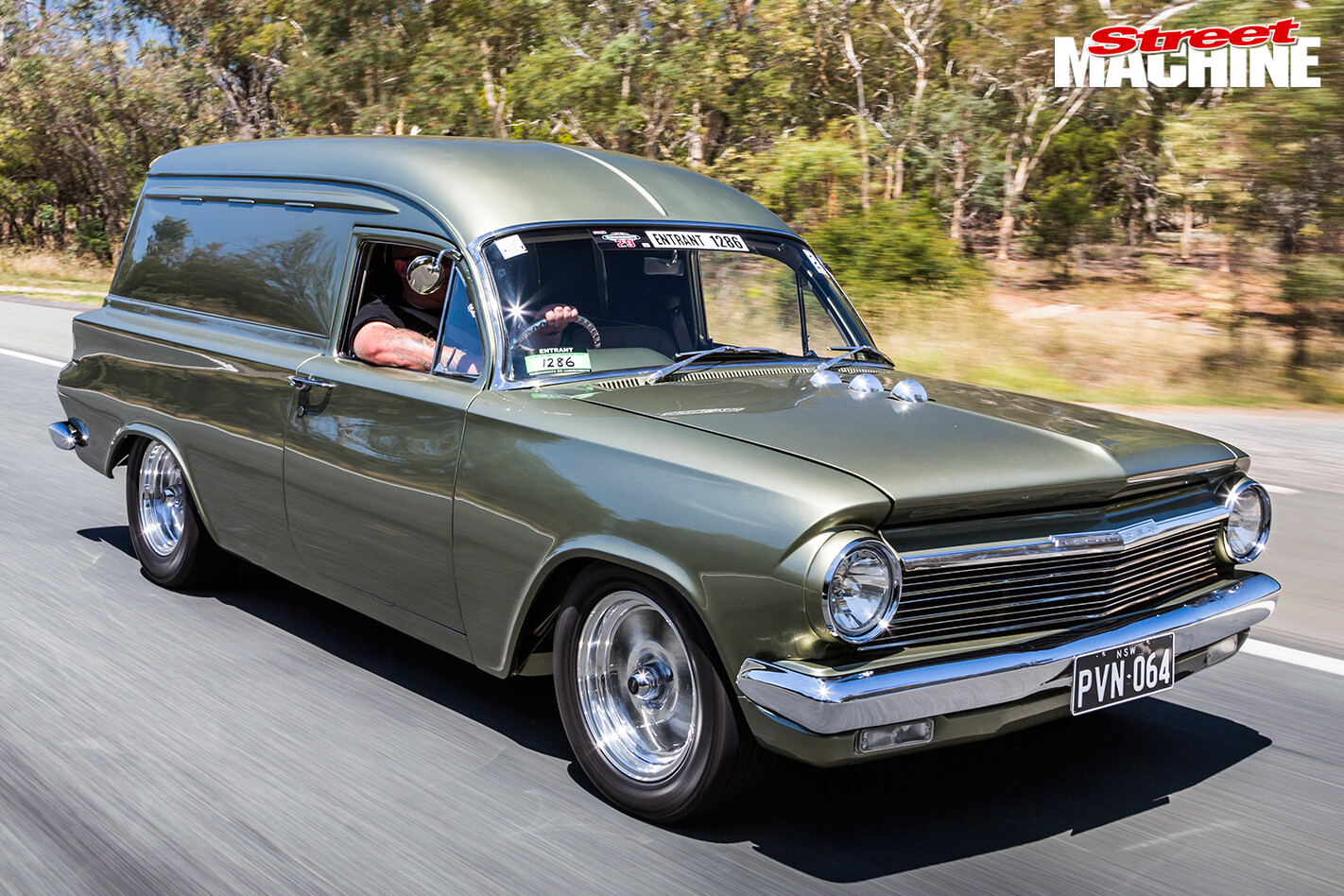 So much so that Brad recently started his own business, Stripped Back Customs, and already has a number of customer projects on the go. “There’s another EH in the works, plus an HK Monaro, XR Falcon and even a 40-series ’Cruiser, so I’m happy to tackle anything. Just so long as it doesn’t involve stone guard!”

EH PANO: IN THE BUILD 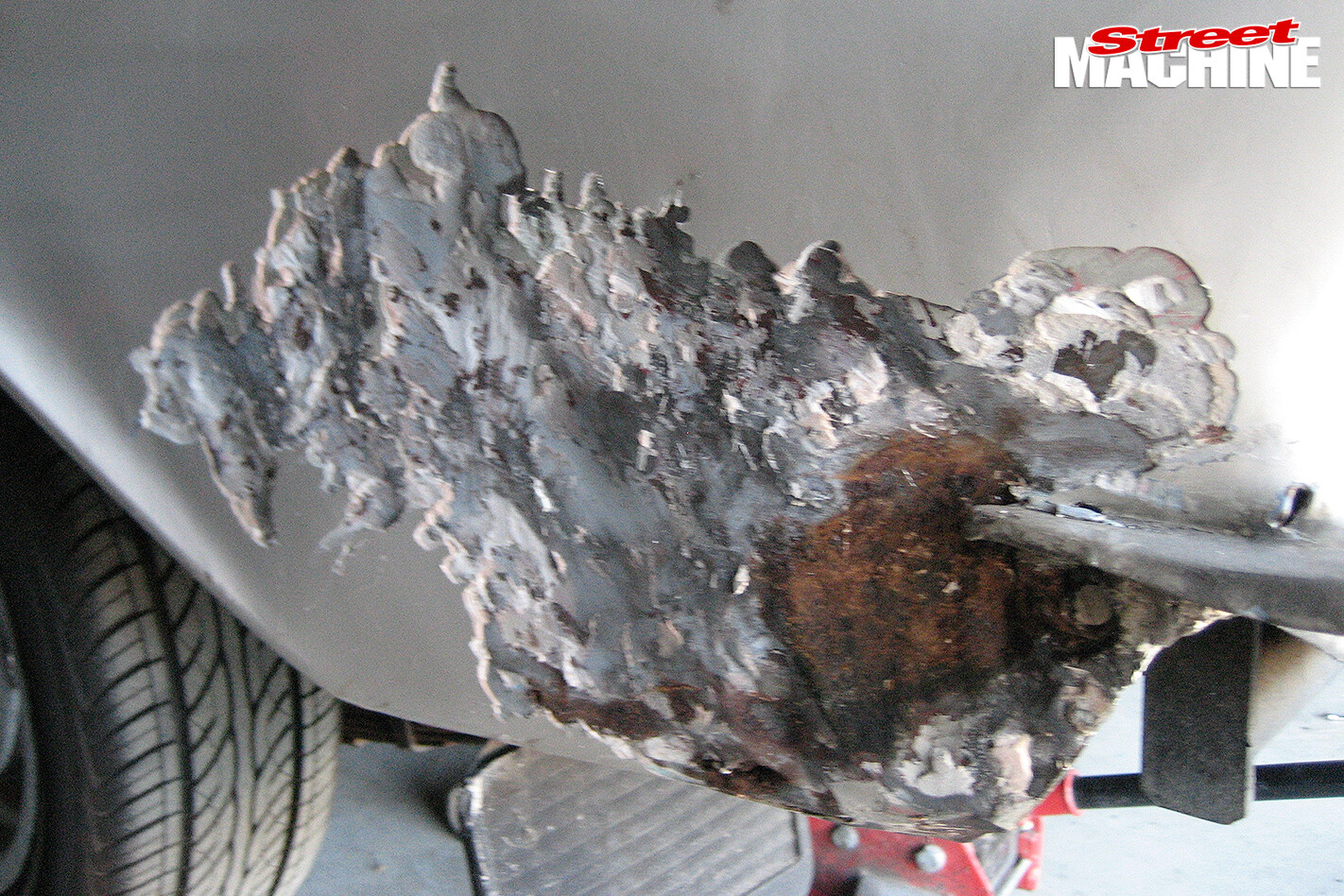 The EH was in pretty shoddy condition when Brad got it. “It was terrible,” he says. “The shell needed a massive amount of rust repairs and was pretty much stuffed.” Complete turret and rear quarter replacement isn’t for the faint-hearted; throw in having to replace the plenum and fabricate lower A-pillars and it’s easy to see why it took nearly three years of spare weekends to finish! Pretty good going, we reckon. The replacement roof section wasn’t complete, meaning that Brad had to repair the front section of the original and weld the two sections together from B-pillar to B-pillar across the roof to create a full new skin.