When Mike Trahar from Mike’s Dyno Tuning gave me a nudge and said, “Keep an eye out for that black EH when it hits the dyno later on,” my first instinctive response was, “Why?” 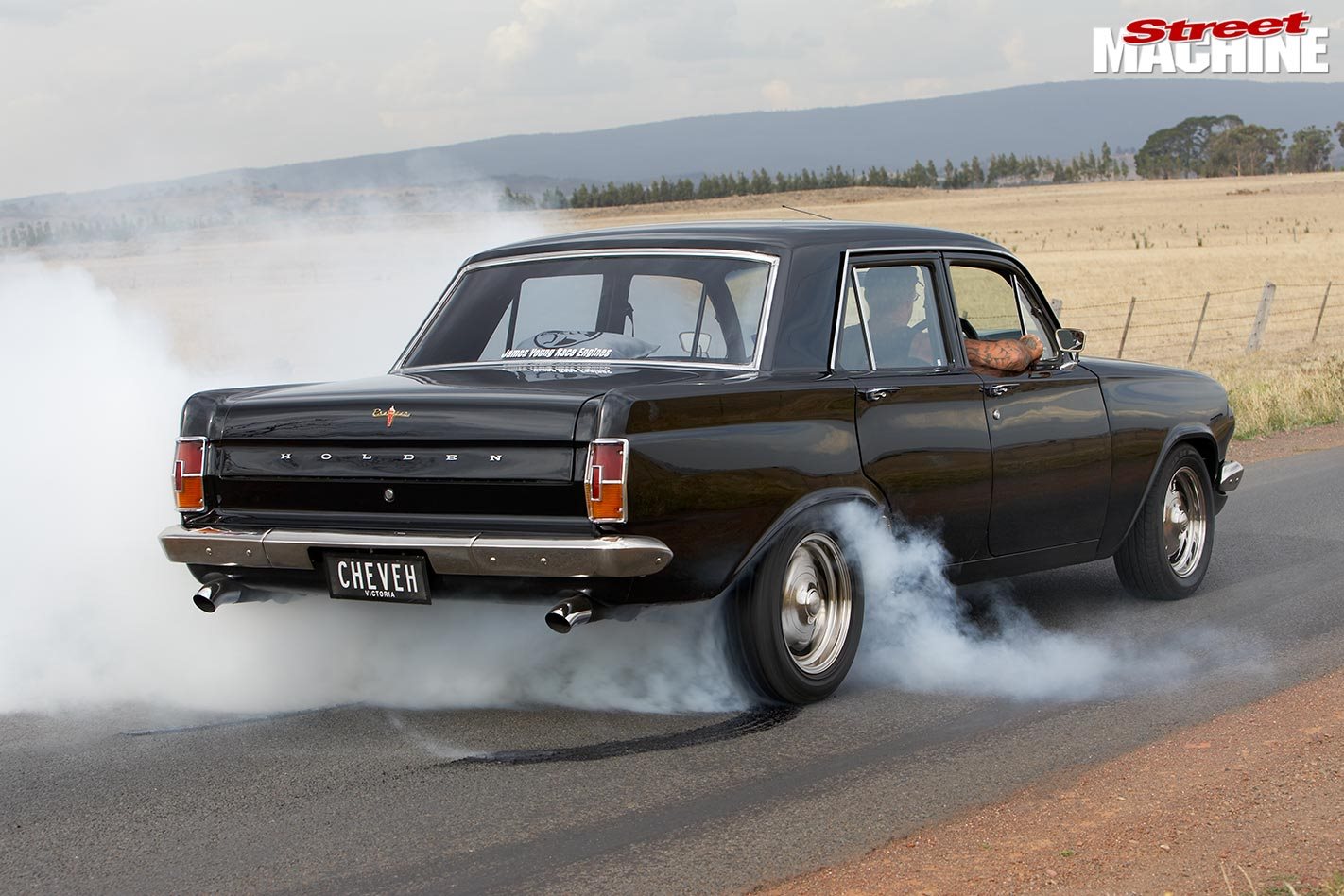 I saw Les Baldi’s EH Premier sitting off to the side and wondered what would prompt Mike to point out the classic Holden. Sure, it had deep black paint and Centerline billet wheels, but I saw nothing to indicate any dyno-might potential. Then Mike looked me straight in the eye and said, “That EH has a 700hp Chev in it.”

Now Mike’s not the kind of guy who’s prone to bullshit or exaggeration – he’s been there and done that with just about everything in the car scene, all the way from awesomely quick street machines, through to Top Doorslammers. Given that kind of endorsement, I thought Les’s EH was worth a closer look. 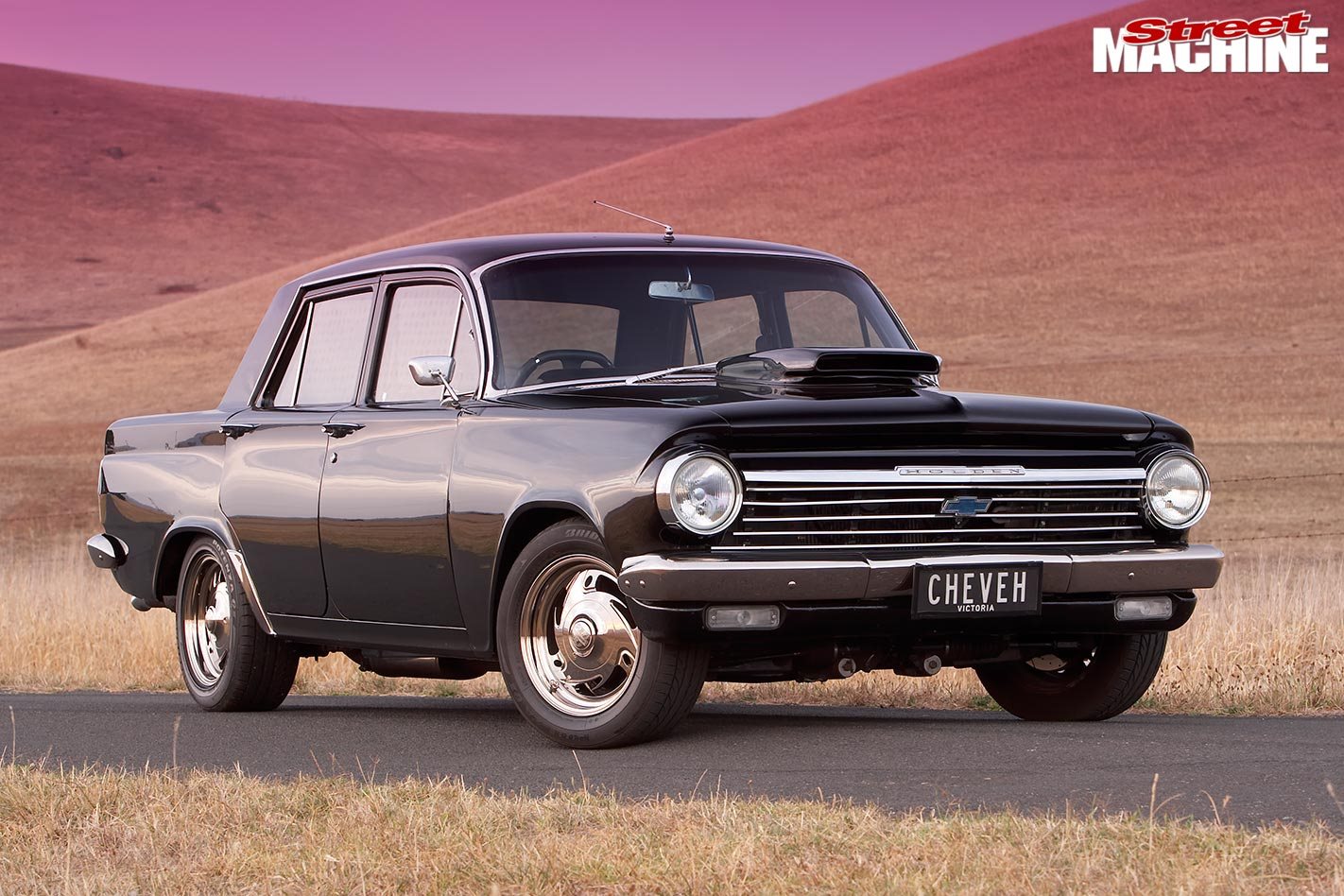 Up close, I was still sceptical, and undertook a slow circuit of the car. It had nice deep black paint and a neat leather interior, but its six-inch-wide wheels and lack of wheel tubs gave the impression that the EH was nothing more than a tidy street machine.

But it’s easy to get blasé about cars in a job like this. My circuit eventually brought me round to the front, where I looked under the bonnet – and it was only when reading the spec board while sitting next to the car, that I could see what the fuss what about. It was like reviewing a high-end catalogue of speed parts; suddenly, I was looking forward to seeing the EH hit the dyno. 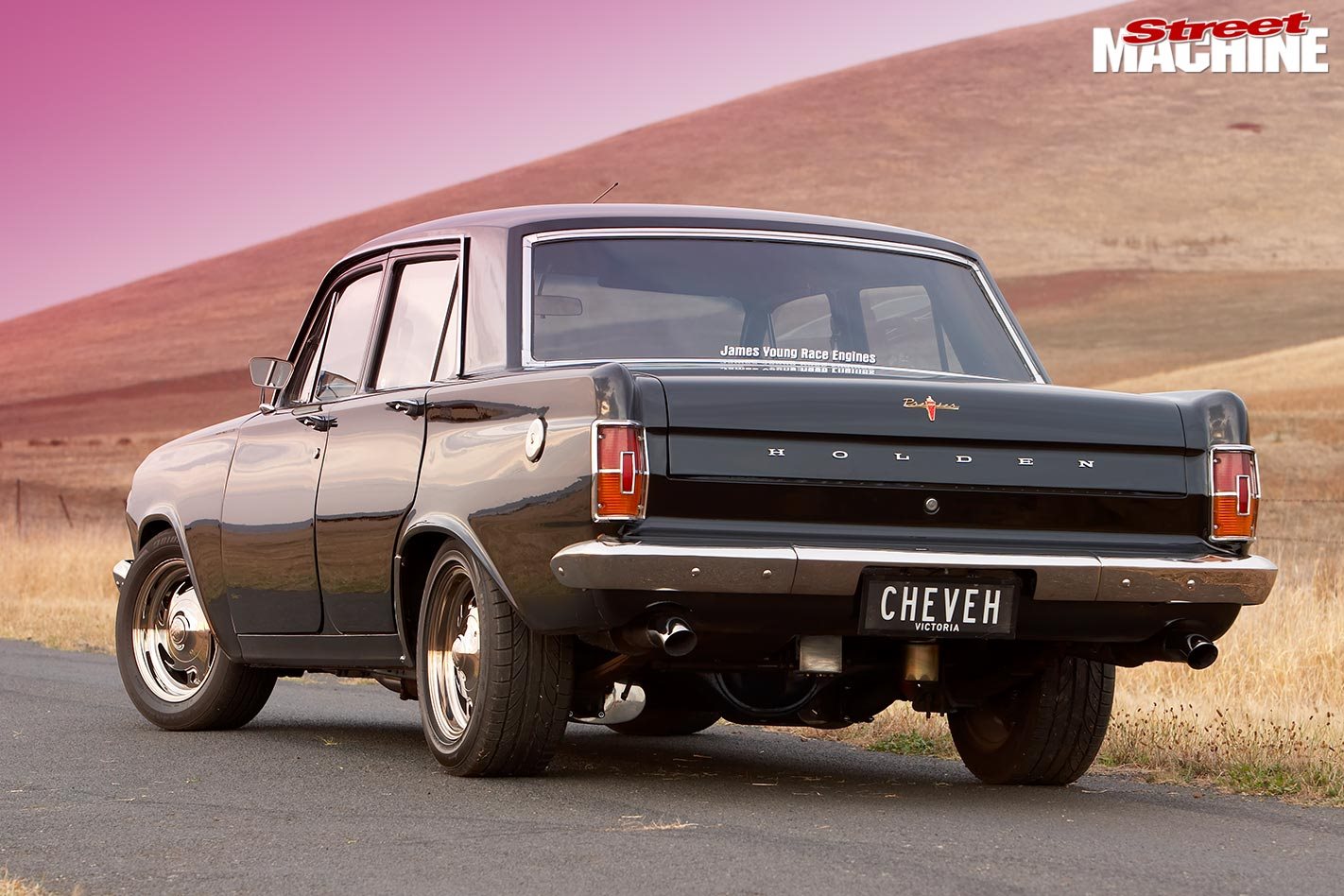 Critical specs, such as 420 cubic inches and Brodix heads, gave some indication of what the engine was about, but there on the board for the world to see were figures of 696hp and 612lb-ft of torque. That’s serious bloody power out of a small-block Chev, even one packing 420 cubes – a tad over 1.65hp/ci – on pump fuel.

Later on, when the EH hit the rollers, I got to see the evidence for myself when it reeled off 458hp through its rear wheels – and that through a Powerglide trans. Bloody hell. I might have been impressed, but Les stood there and just shook his head. “It needs a new torque converter,” he lamented. 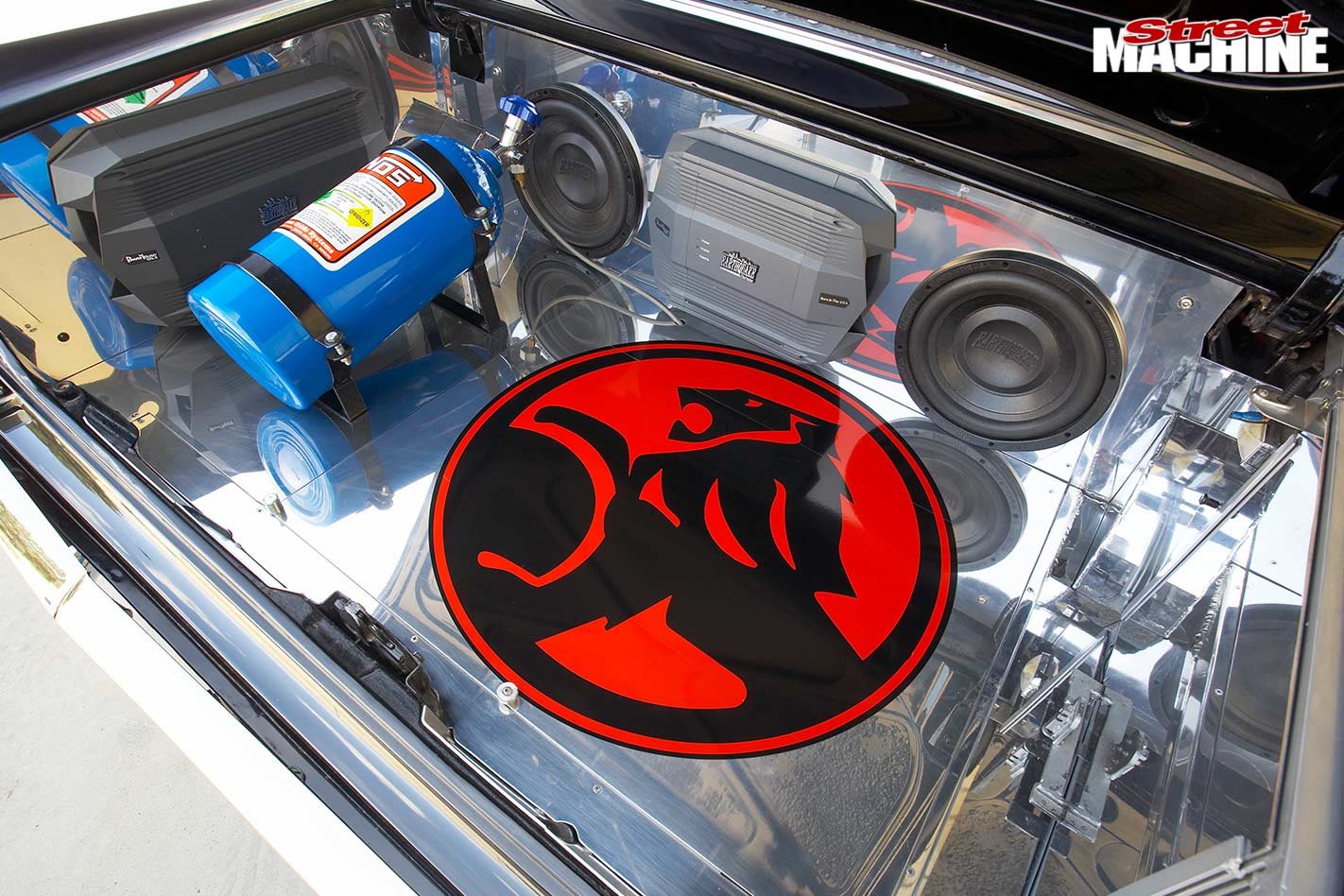 Apparently, the power from those new Brodix heads was causing problems, and not all the power was getting through to the rear. Previously, the EH had seen 520hp at the bags, so Les wasn’t too happy.

So, what possesses a guy who just hit 50 to build a 40-year-old car with such an awesome engine? “I’m a little bit different,” replies Les.

Having come into some money through an inheritance, Les bought the EH a few years back, and decided to buy himself something with a bit of grunt. He recalls, “I took it for a drive and said, ‘This is nowhere near fast enough for me’.” 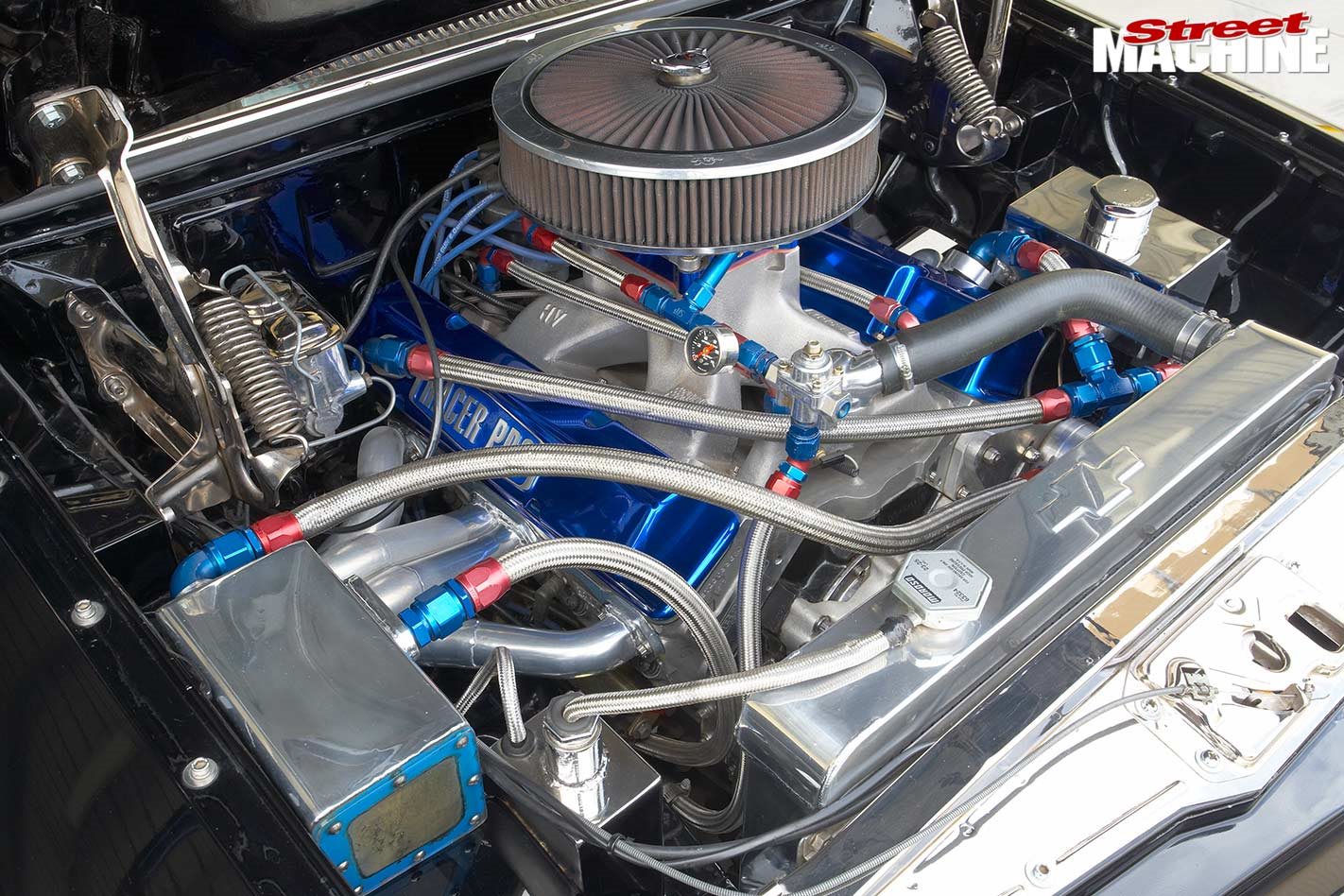 Sharp eyes will pick the Racer Pro rocker covers on Baldi's flash new Brodix heads. The Brodix covers were in the paint shop when we shot the car

At the time of purchase, the EH was already sporting a 307 Chev small-block, Powerglide and nine-inch, but it was all a bit tatty according to Les, and so he commenced an epic build, with a price to match.

Now, Les is the first to admit that when he started the build, he didn’t know a whole lot about building a car. Moreover, problems in the build have left a sour taste in his mouth, such that he now advises other budding car builders out there that, “If you don’t know what you’re doing, and don’t know anything about cars, then don’t build a car. These bastards that try to rip you off – they’re unbelievable. 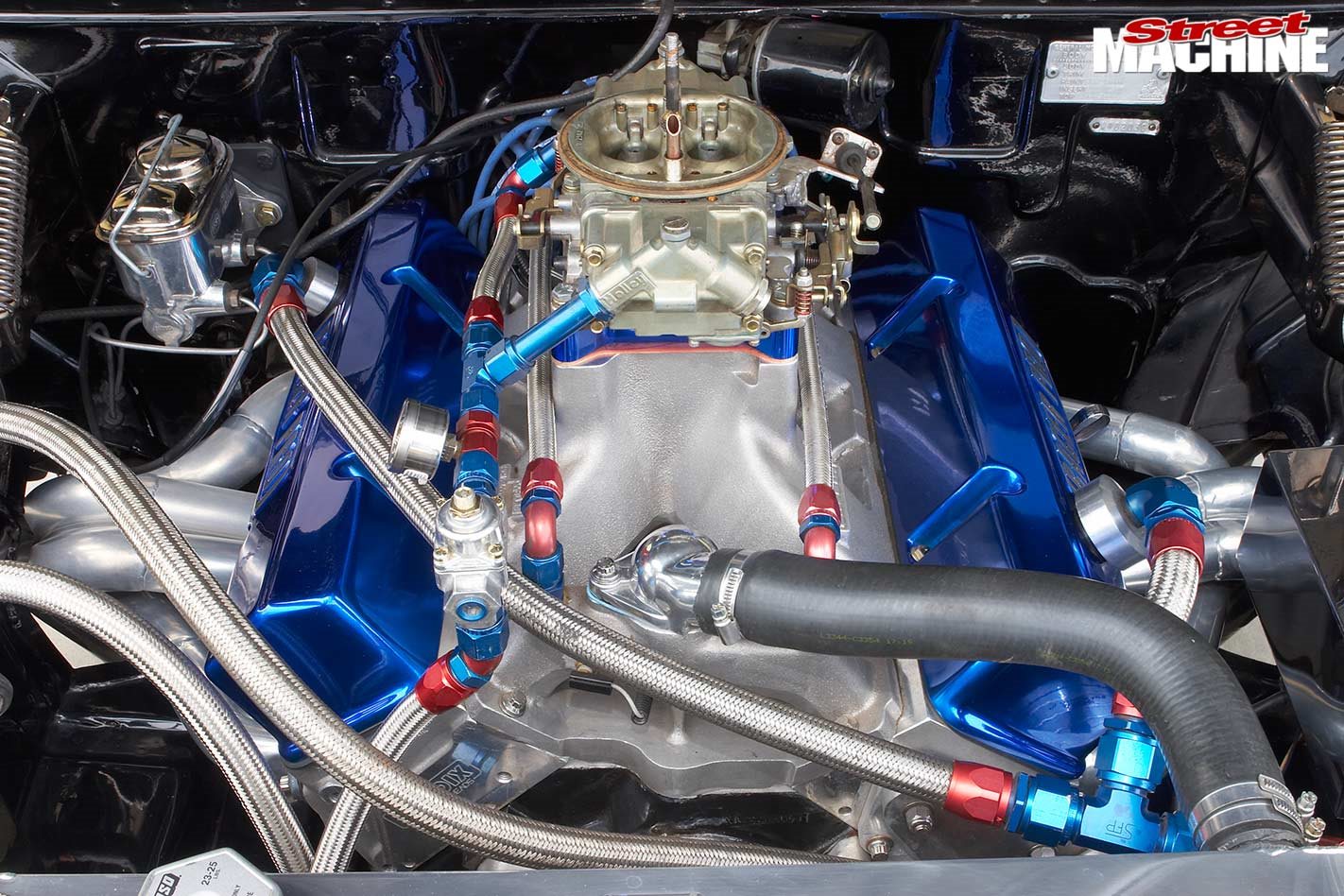 “I reckon the car has probably cost me $60,000 more than it should have,” he admits. “Make a list of the right way to build a car and then turn it around, and that’s the way we did it – everything backwards,” he confesses.

After re-trimming the interior with leather and respraying the exterior jet black, Les wanted more grunt out of the early Holden. Its first engine was a 400-cube small-block that gave him no end of trouble. After a few rebuilds, he decided to get serious and turf the factory block, building a new engine using a World Products Motown block. This was filled with all the best bits, such as an Eagle crank, Total Performance rods, JE forged pistons and a Comp Cams roller camshaft. Initially, it was topped with a set of fine Kiwi Racer Pro heads, but more recently these have been shelved, and these days a pair of CNC ported Brodix heads does the job. 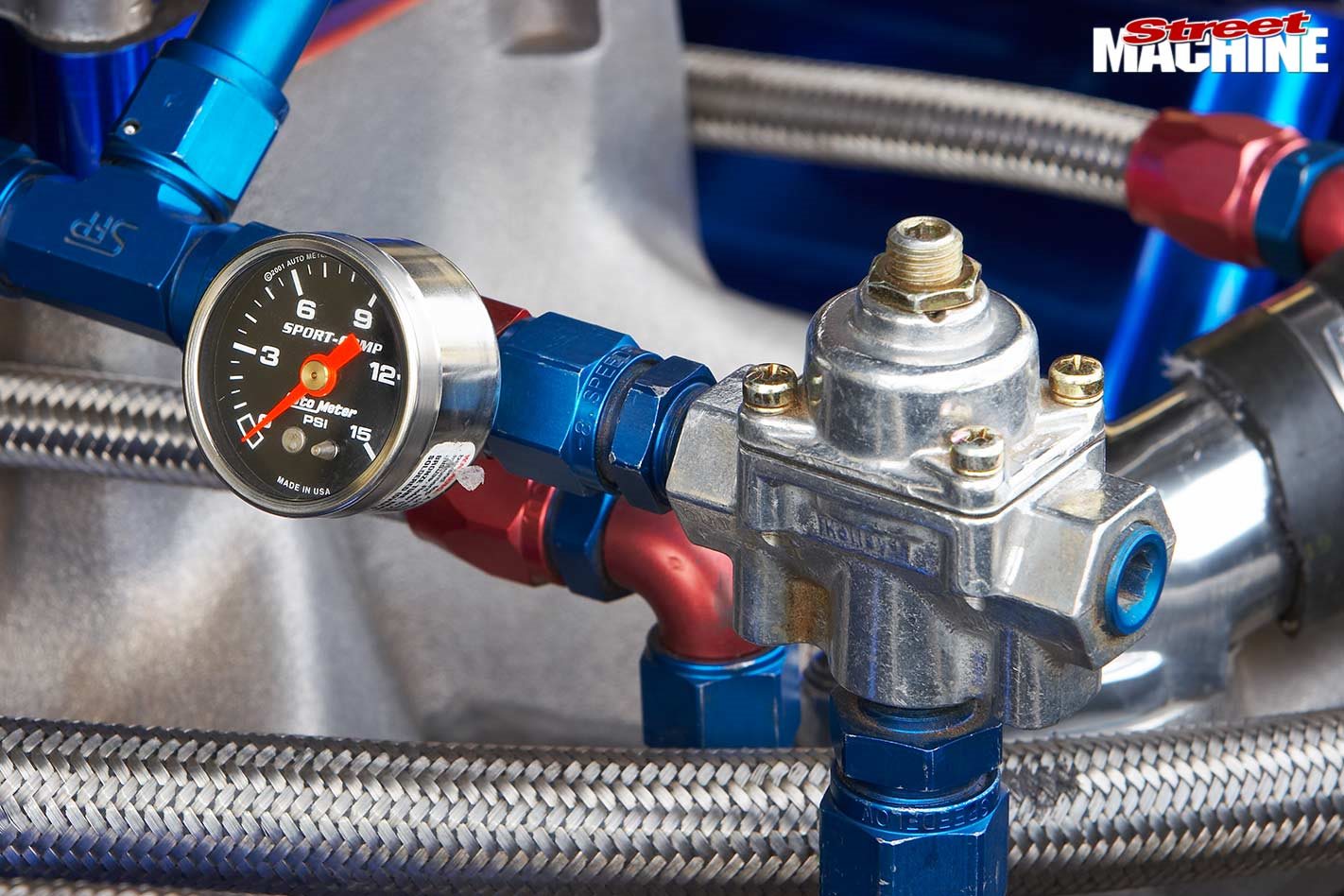 And, while Brodix makes a whole bunch of heads for the small-block Chev, these top-shelf items move ludicrous amounts of air – if they fitted, they’d be more at home on a big-block. James Young Race Engines was responsible for the build, and the engine has been dyno-tested at 696hp.

Looking at the photos, you might have noticed there’s a nitrous bottle in the boot, but no solenoids on the engine. But, there’s a perfectly good reason for that. You see, back when the old Racer Pro heads were on the car, Les also had the guys fit nitrous to the car. 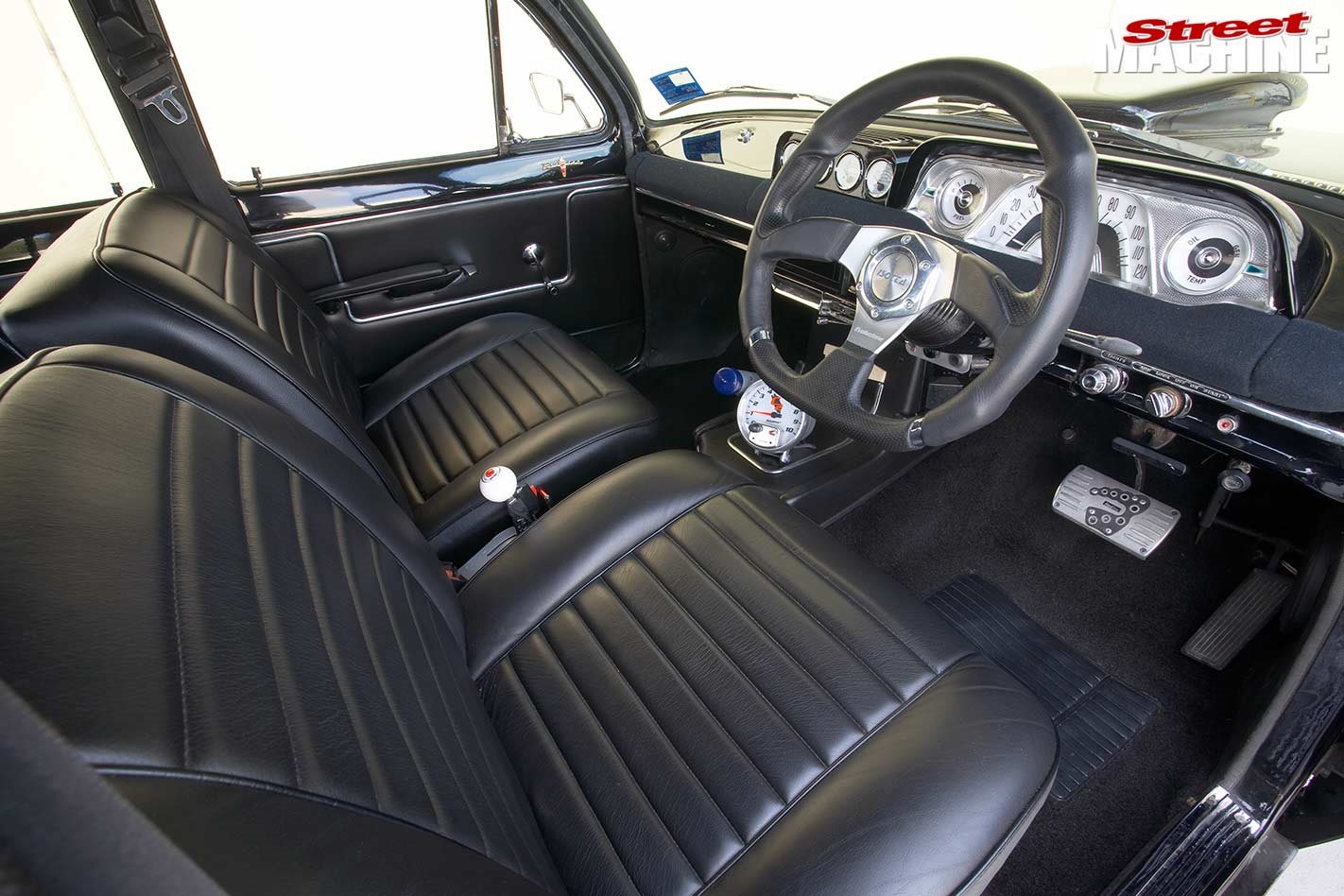 Well, the recent changes meant that the engine wouldn’t fit under the bonnet if the nitrous plate was fitted, so it’s been left off for the time being. 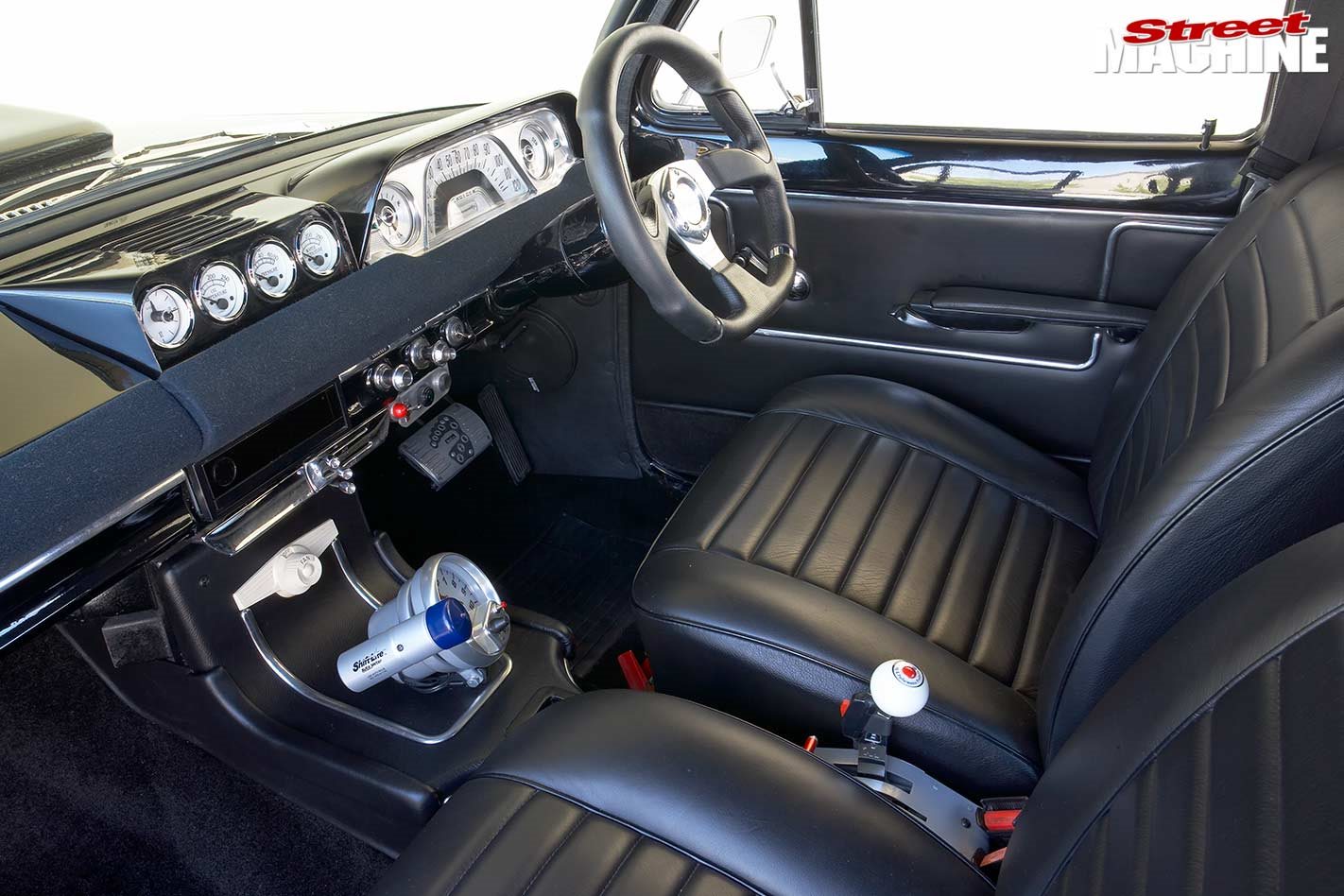 That’s not surprising really, given that the Holden is trying to put its power down through a pair of 225/50/15 Bridgestone Potenzas. And it’s why the car is currently at McDonald Bros getting a new set of tubs, a four-link rear-end, and some 10in-wide rims, but the madness isn’t going to stop there.

“If I had known back then what I know now, I would have built the thing with twin turbos in the first place,” says Les. Twin turbos? Bloody hell! Now, he’s planning to fit a pair of turbos to the already-stout small-block, and is looking for an easy 1200hp on pump fuel. It shouldn’t be too hard, considering the gear that’s already in the engine. Just dropping the comp and fitting a new cam should do the trick. 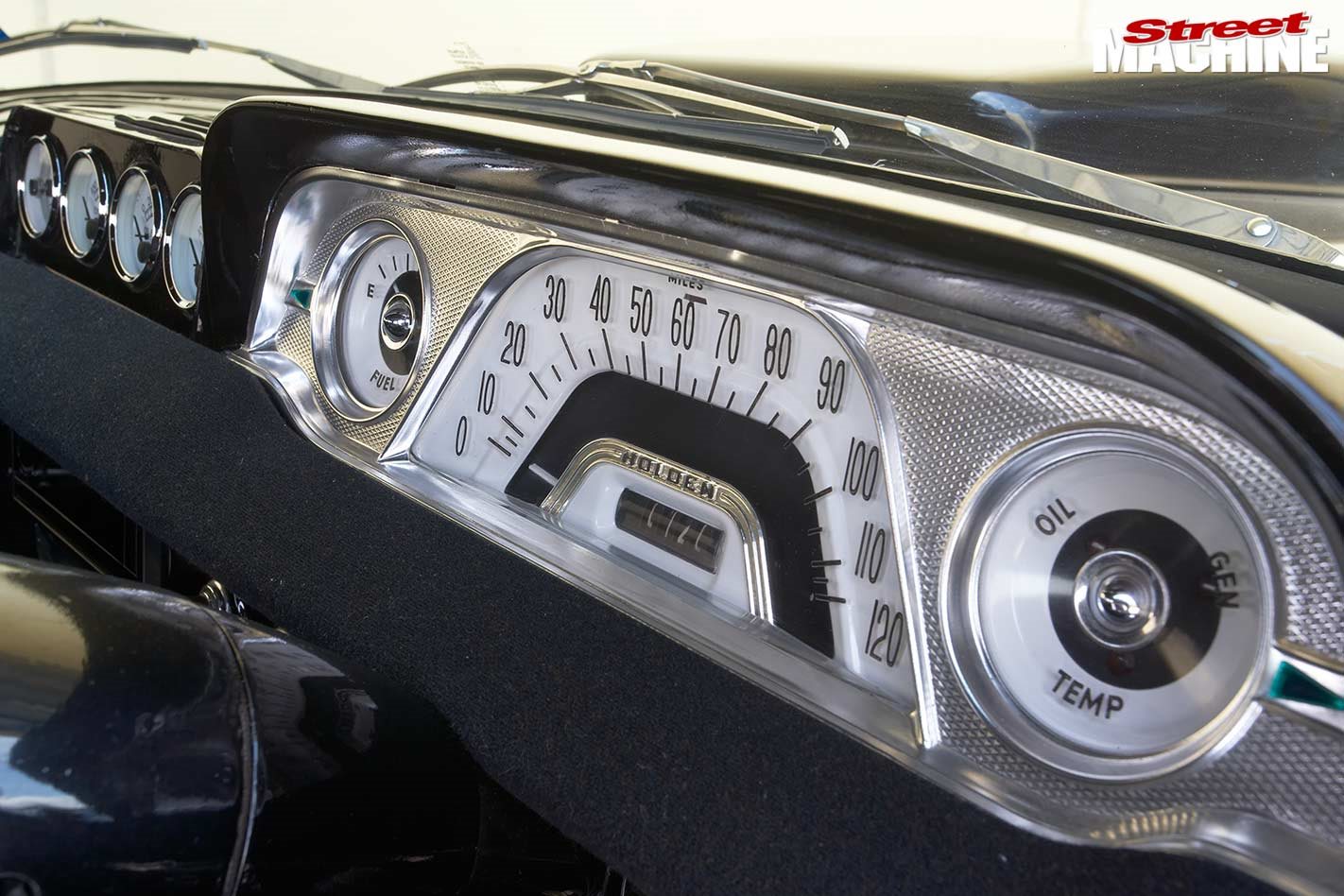 With two hairdryers squeezed under the bonnet, the EH is going to be one wild ride, but you can tell when he talks about it that for Les this isn’t only about horsepower – he’s passionate about the whole car. “It was one of the best Holdens ever made,” Les believes. “They just look good; tell me another car that looks as good. I’m never gonna sell the car, that’s for sure.” 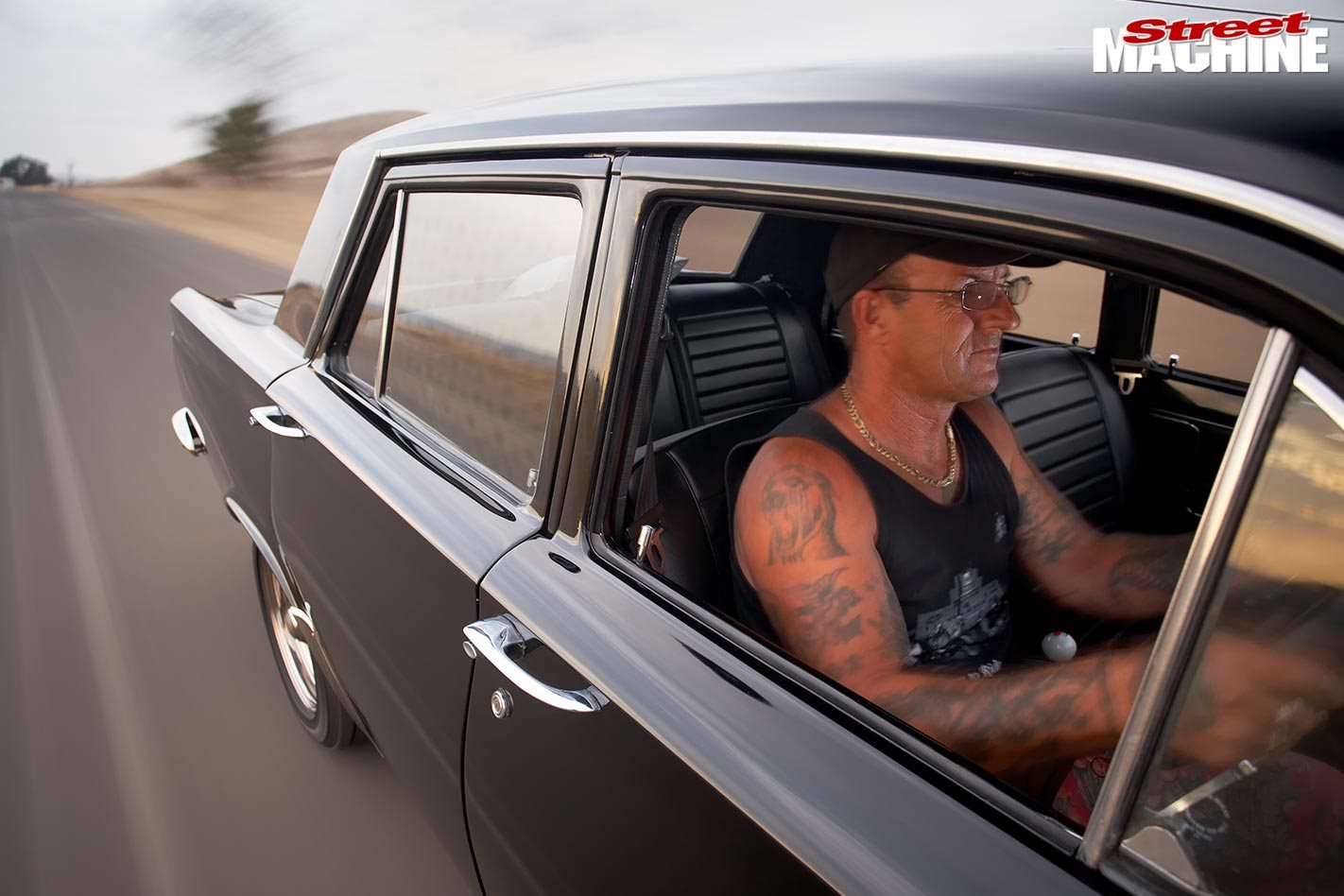