IT’S a great pub yarn and Simon Berger tells it with flair: “I turned up at work,” he says of his then just-bought EH Holden ute. “I didn’t tell anyone I was buying it so I was getting the ‘what have you done?’ look.

“We loaded it up with carpet and I had to figure out how to strap everything down with no racks. It just had a tonneau on the back. To be honest, I hadn’t put much thought into it! I loaded it up and I couldn’t drive it out the driveway — the tyres were binding in the guards! The guys were staring at me. The next day the lowering blocks came out.”

Luckily, his boss wasn’t pissed off. In fact, he’s well known for his own Holden antics; Rob Godfrey, of TOYTON fame, has been both a mate and a mentor for Simon during the rebuild of his classic EH. 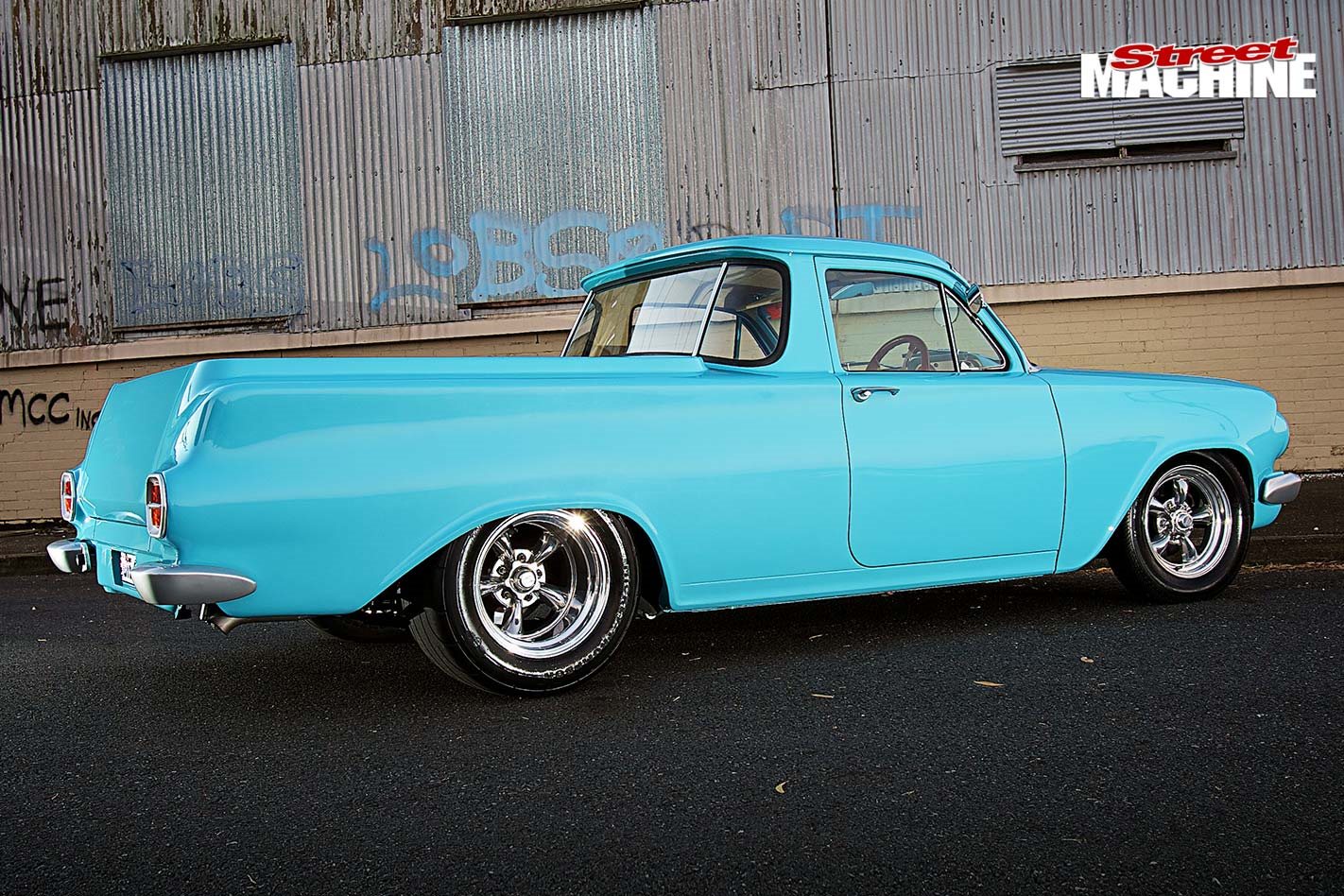 Mods include shaved door locks, fuel filler and spare wheel door. Simon also converted the front bumper bar to one piece and fitted custom hinges to the tailgate for a super-smooth look

It’s Simon’s first big build — and like a lot of projects, it wasn’t supposed to be big. “I’ve had Toranas and Commodores over the years and I’ve done engine swaps but I’ve never stripped a car or decided to hack one up!

“At the time my work vehicle was a HiAce van; selling that gave me the money for the ute. I paid top money for it and it was an almost-original car with good floors and minimal rust.”

So for a year or so it served daily work duties before Simon pulled it off the road.

“I put it in a mate’s shed and started into it,” he says. “At the time, a tidy-up and a quick paint was all I had in mind. The paint was a neat job but it was from the early 1990s. I stripped it down and started sanding it back and thought: ‘Gee, I’m committed now!’

“It’d had a big hit in the left rear quarter. It had been trowelled with an inch or more of filler.” 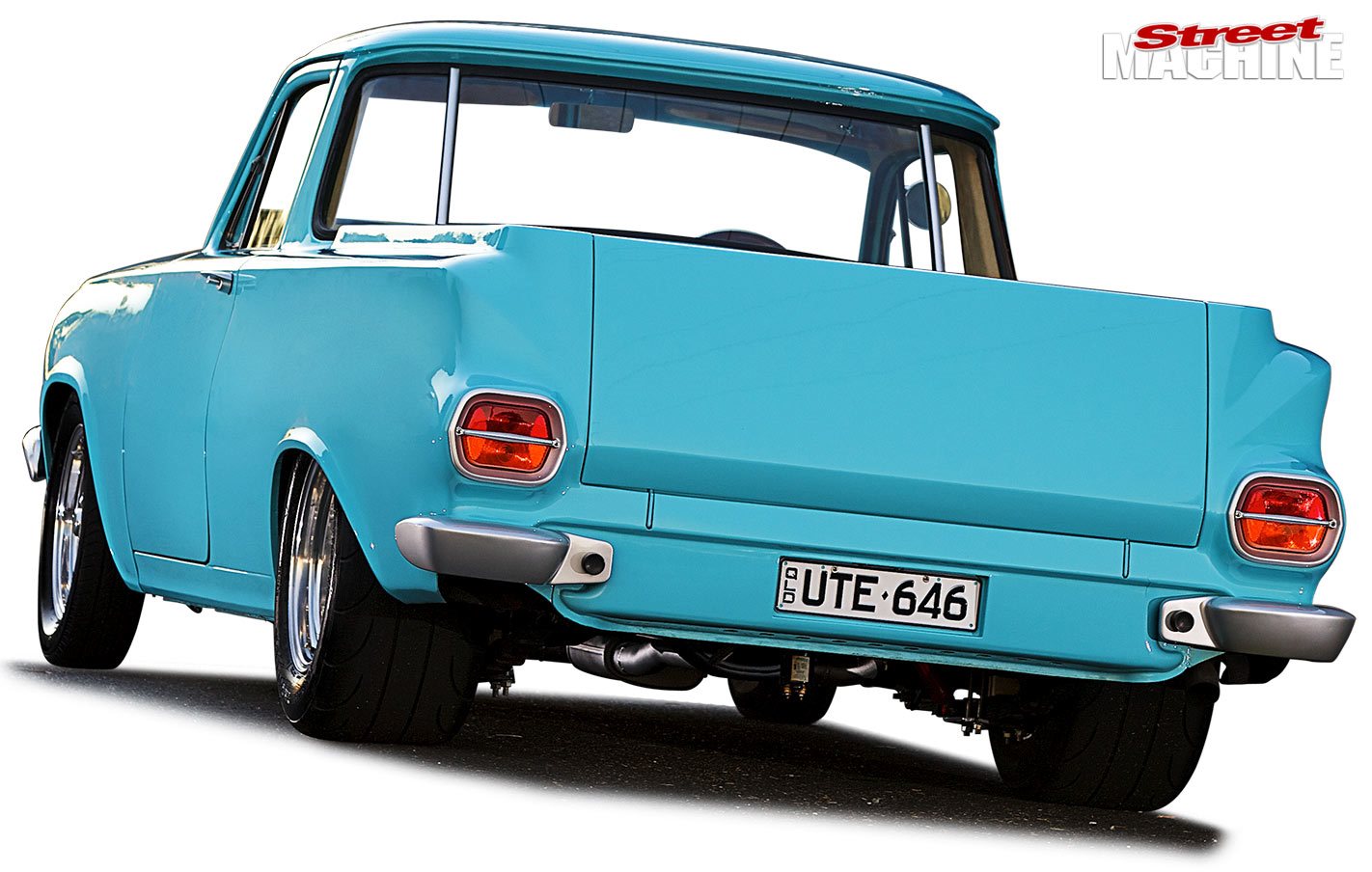 As it will, life soon interrupted: “The project started in my mate Bob’s shed at Peats Ridge. I’d leave North Richmond on a Friday afternoon and drive (100km) up to the shed and spend the weekend working on it. Then it went to Castle Hill and another two places I lived at, then the Godfreys’ place for 18 months. I’m surprised I didn’t lose anything.”

Rob’s influence was pretty big. “I’d arrive at work to load up and we’d spend an hour talking cars,” Simon recalls. “He was a great mentor. I wouldn’t have done half the stuff I did without him suggesting it and encouraging me. For instance, it was Rob who suggested I get a big tyre under there and that was what made me decide to mini-tub it.”

The tubs were rolled up by a sheet-metal company close to home. “I told them what width and diameter and then I installed them,” Simon says. “I can still remember switching on the grinder for the first time and thinking: ‘I’m about to hack up a really nice car!’” 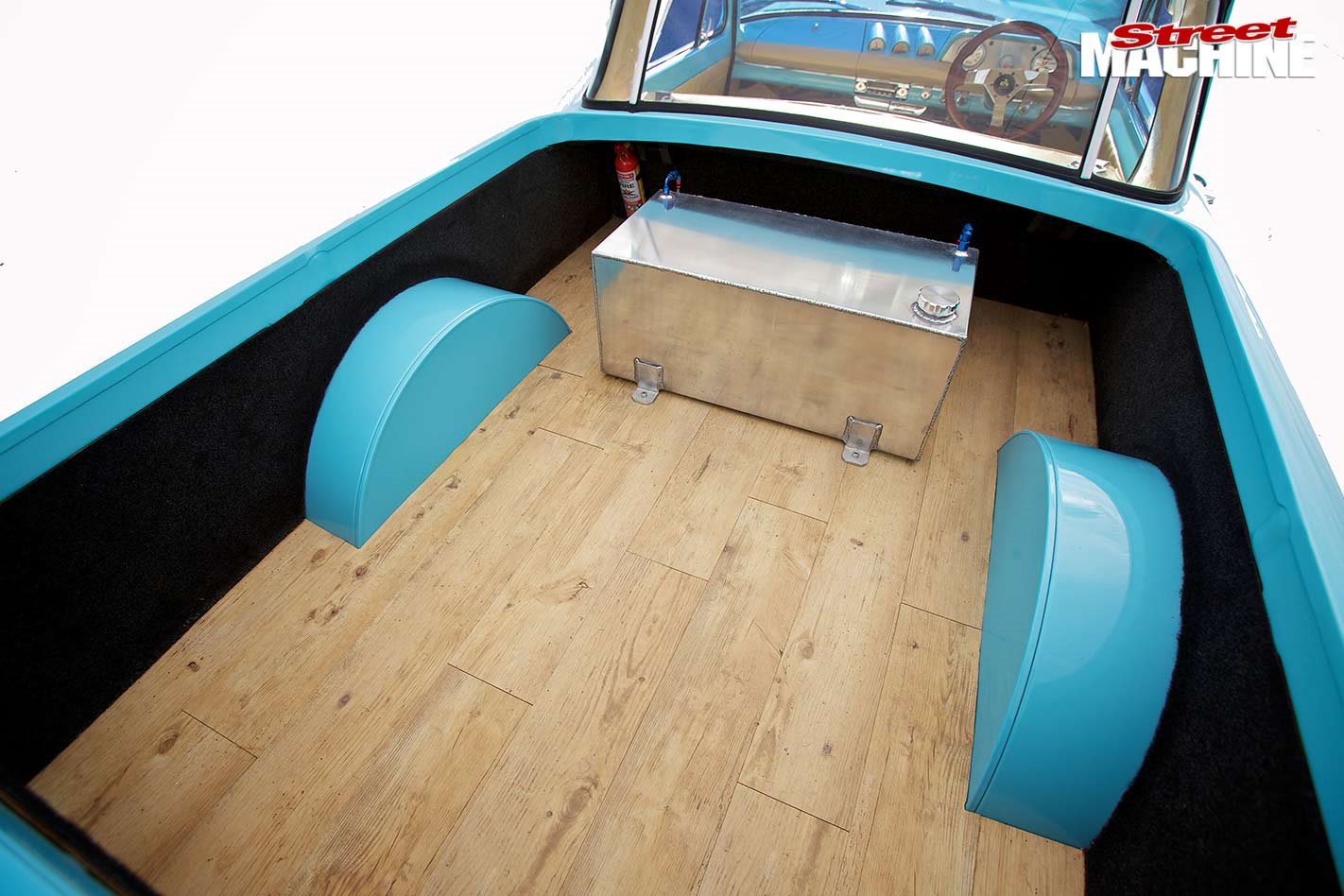 Alloy fuel tank means the work days are over. The battery’s under the tray, freeing engine bay space. Cutting out the wheel tubs was well worth it now that those 15x10 Torque Thrust IIs are jammed under the back

That all went well, and another mate, John Baxter, applied a homebrew PPG blue to the ute when the bodywork was finished.

Simon bought the car with a 202 red six and a Toyota four-speed gearbox. It still runs them.

“I bought an engine off a bloke I knew,” Simon recalls. “He went to school with my sister. I had some 1¾-inch SUs, so we threw it in one weekend.”

Allegedly freshly rebuilt, the engine was spun up to bed in the cam. No worries — until the next week when Simon started the engine again. “It lasted about five minutes before it started rattling. Before I could reach for the key it threw out a rod.” 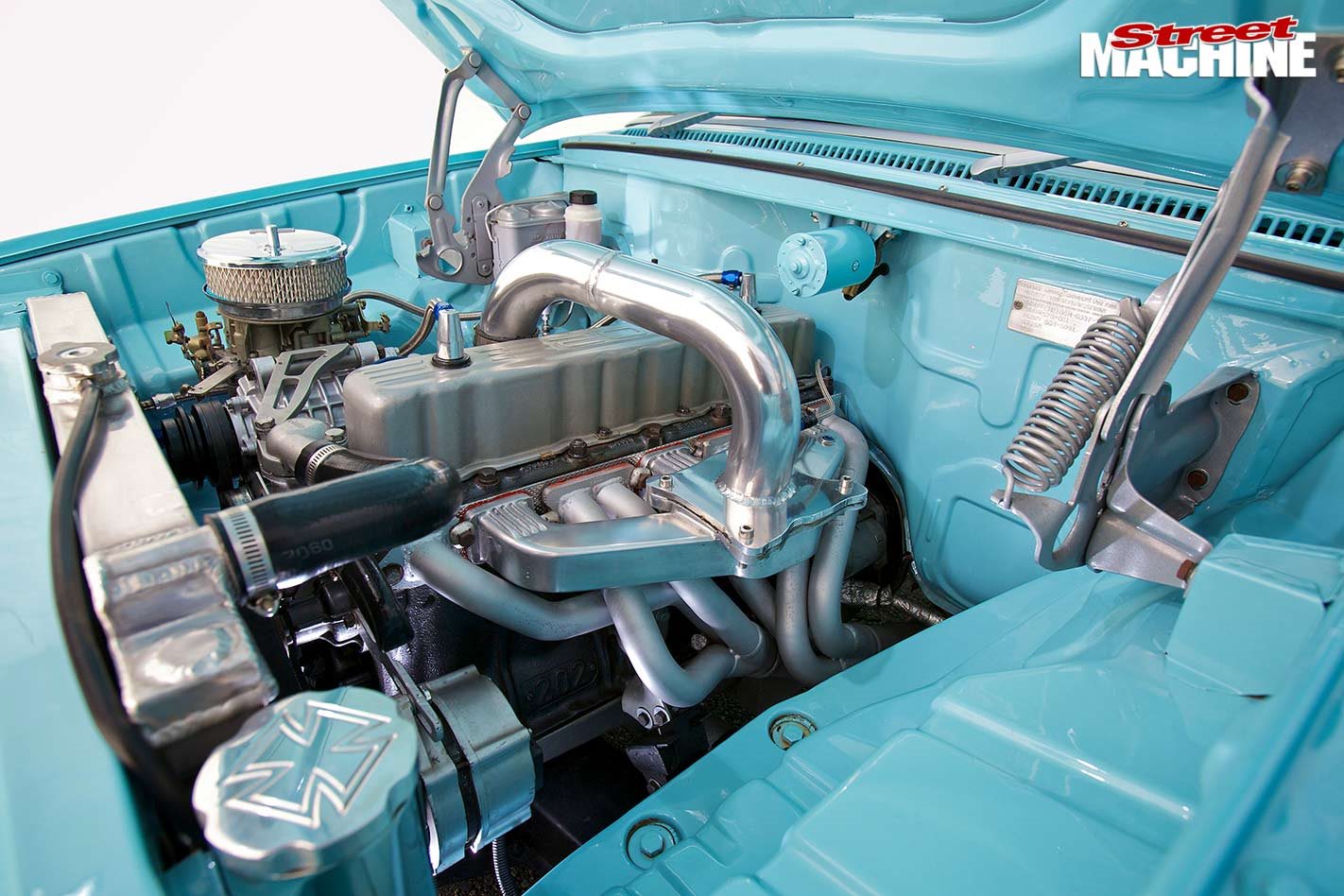 Down but not out, Simon asked around for a reliable Holden engine builder and found C&B in Sydney’s Seven Hills. With the ‘new’ engine junk, the old one was checked and found to be a virgin bore. Simon also bagged a Toyota-based blower kit.

“We started from scratch and built it for some boost. The little blower feeds in six pounds and it’s got great torque and it doesn’t mind seven grand.”

That’s due to a counterweighted Holden blue crank and Starfire rods plus ACL pistons and Crow and Yella Terra valvetrain parts. The head is a red nine-port, breathing from a 500cfm Holley. 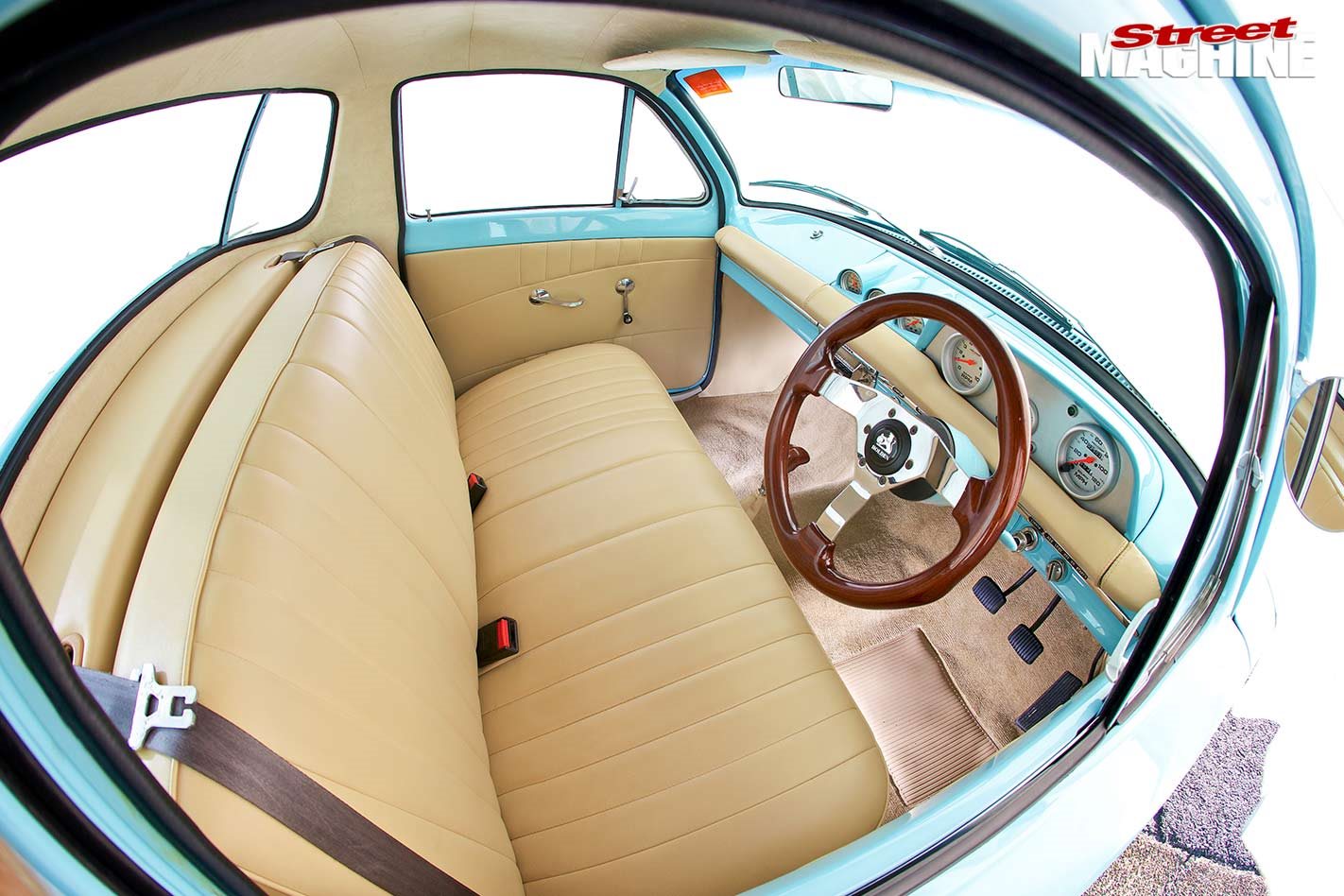 Inside is a mix of modern and classic, with integrated retractable seatbelts, leather trim, old-school accessory gauge cluster and a set of Auto Meter Ultra-Lites replacing the factory speedo binnacle

And the bench seat? “I’d installed Sparcos and relocated the handbrake to near the door but the buckets sat too high and there was no rear vision so I took them out and sold them.”

Luckily the original bench frame was in the shed at Peats Ridge. “He’d had a big clean-up and it could easily have been chucked out,” Simon says.

It’s been on the road for a couple of years now and covered some 3000 miles, including a few passes at the recent Six Banger Nats, his first racing effort.

“I wasn’t too sure on categories and times but I wasn’t worried,” he chuckles. “I was pretty happy and it was a great weekend.” Taking home the Best Presented and People’s Choice trophies would have been worth a beer, too! 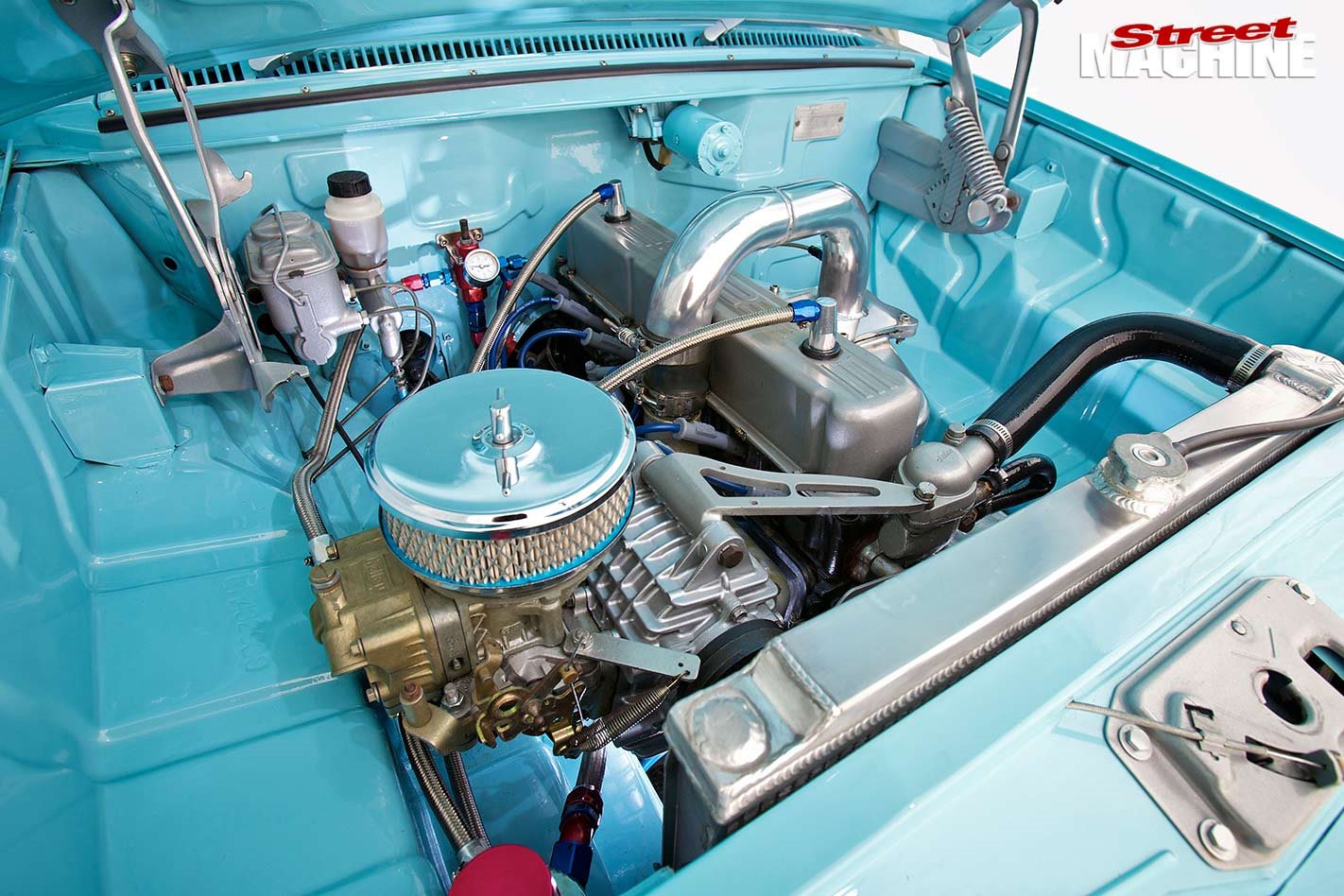