Robert Comitogianni's pony car doesn't get a lot of miles. But if you'd spent this much, you'd be shy too

Robert Comitogianni's pony car doesn't get a lot of miles. But if you'd spent this much, you'd be shy too

ROBERT Comitogianni has a passion for Fastback Mustangs. “I just love them,” he says. “The Fastbacks are just beautiful cars. I like the ’65 or ’66 Fastbacks best — the bodies are beautiful; you don’t have to touch them.”

But Robert’s definitely left his touch on this silver machine. He may have kept the body totally stock but under that skin, this pony car is a whole lot different to how it rolled out of the Ford plant more than 40 years ago.

Rob loves the classics but he’s equally passionate about the individuality of a custom machine.

“When you go to shows they’re all the same but this one is a full-on custom car — everyone just freaks over it,” he says. But he doesn’t take full credit for the car. 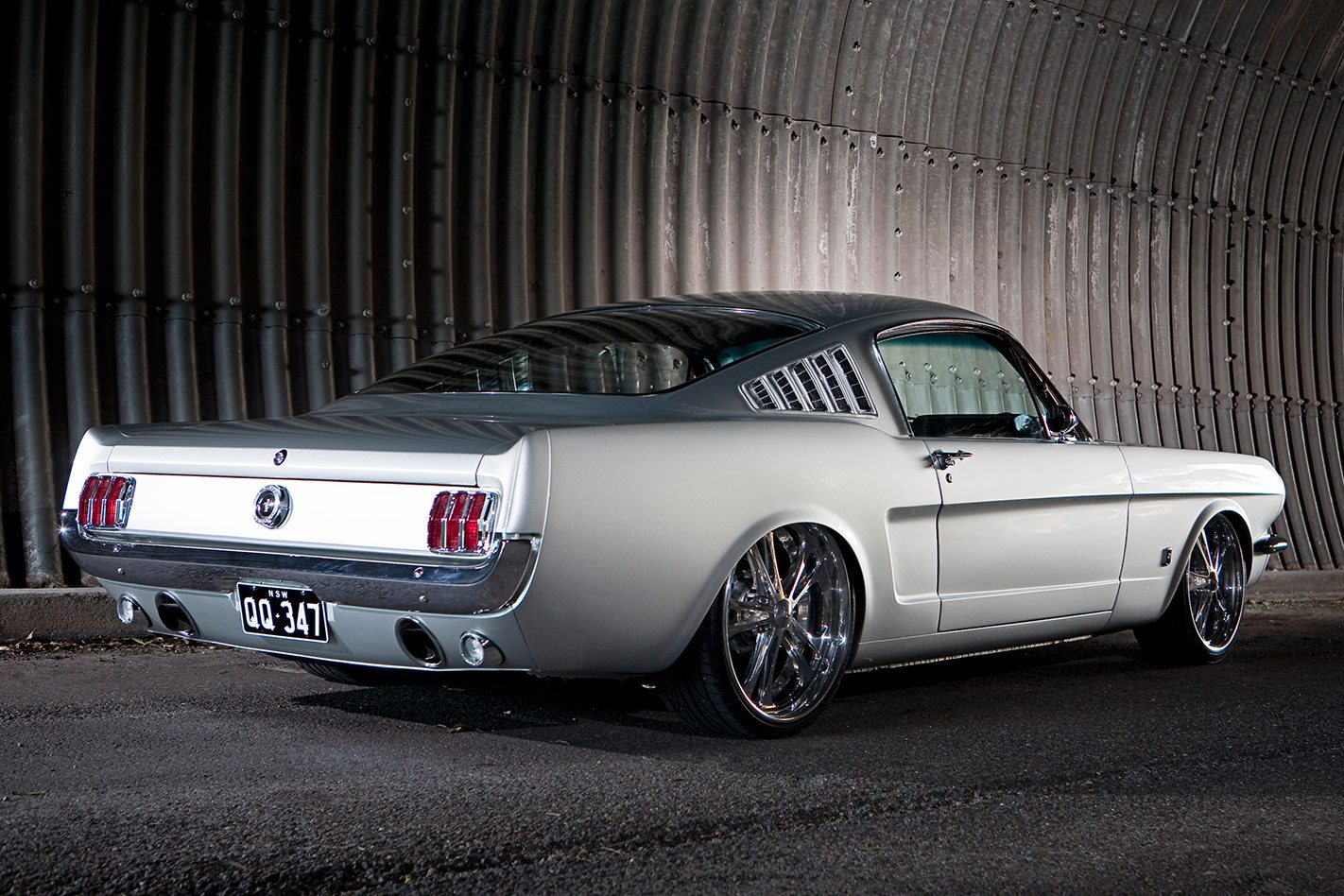 “I bought it from New Zealand,” he says. “I’m always looking on eBay to see what’s about and I found it there. I rang up straight away because I liked it and it’s what I always wanted to do but if you built it from scratch, it would cost you a lot more money.”

As it sat, the car was painted in Subaru Silver, with a 347 stroker Windsor, airbag suspension with rack and pinion steering, SSBC disc brakes, Foose wheels and a bolt-in four-link up the back. Plus leather trim, central locking and lots of nice little details like billet bonnet hinges. 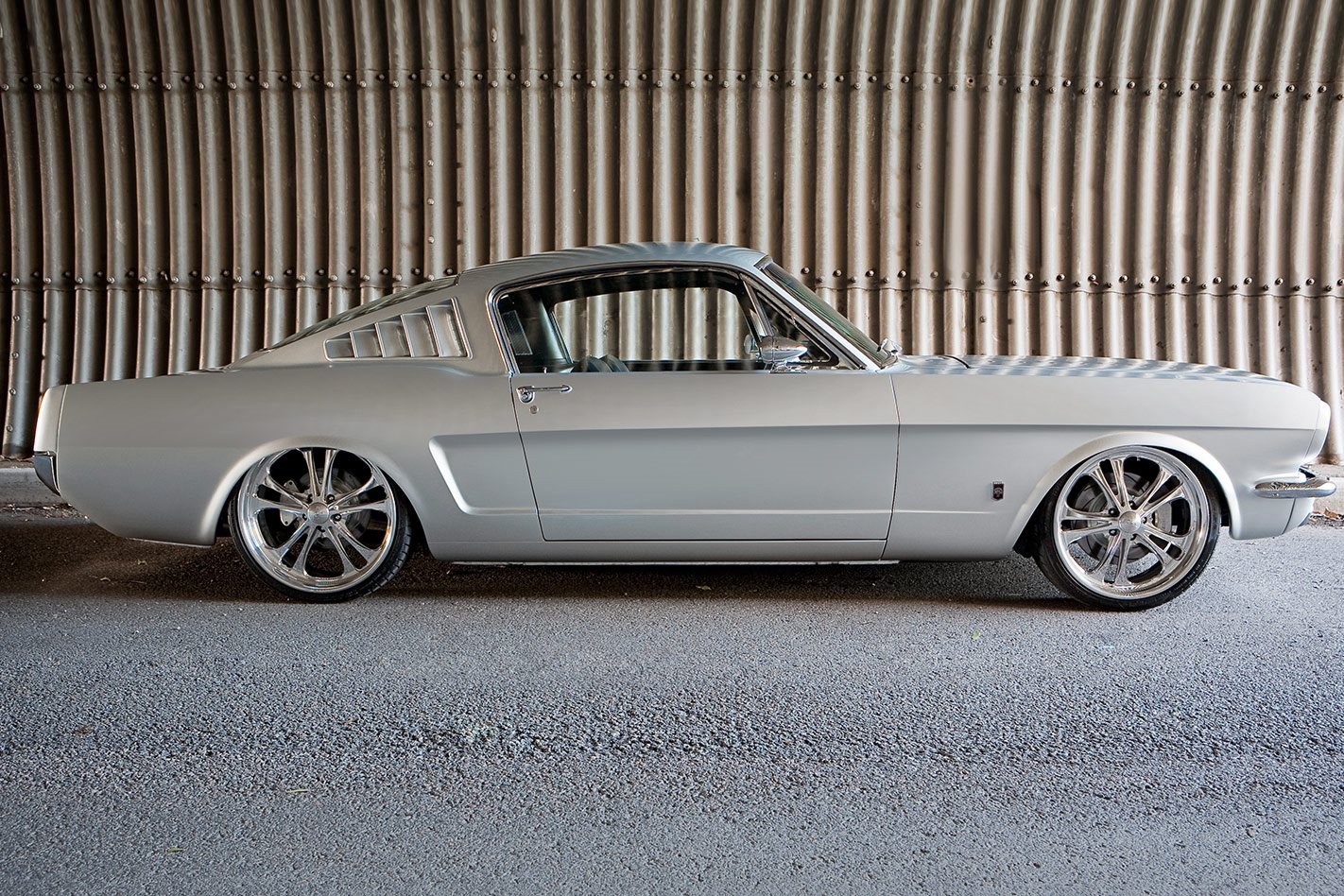 “About four or five weeks later I went and looked at it and when I saw it, it wasn’t up to my standards in finishing. It was like he got towards the end, realised how much money he had spent, put it together and got rid of it.” 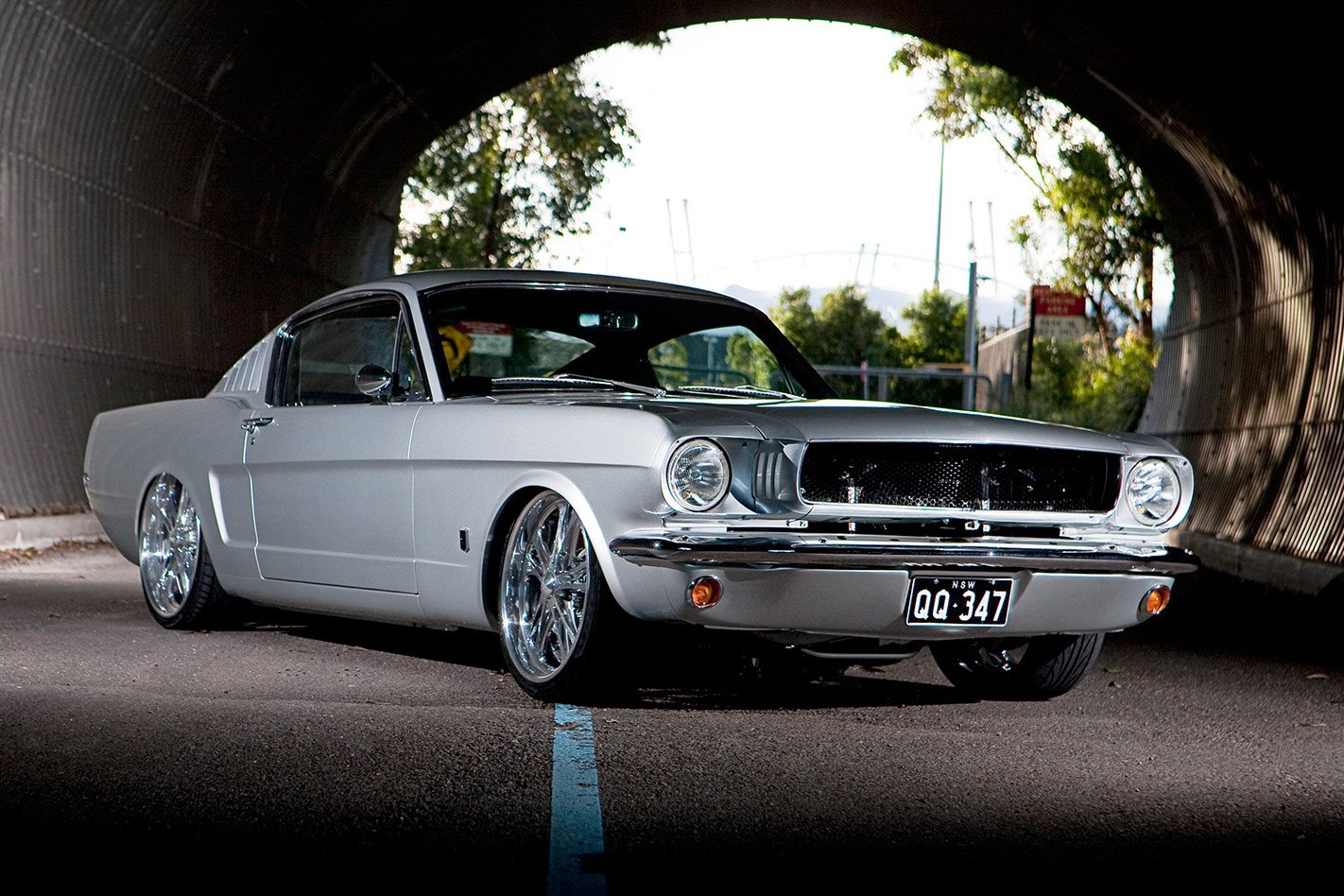 Of course, the car was a long way from the “totally wasted shit-bucket” that the previous owner said he started with — it just wasn’t up to Robert’s exacting standards.

First thing he did when it arrived was buy new glass for the whole car and strip off the chrome mouldings for repolishing. Little details like scratched glass and mouldings can cost you big on the show circuit. Plus, Rob gets a kick out of making good things even better — it gives him something to do at night. 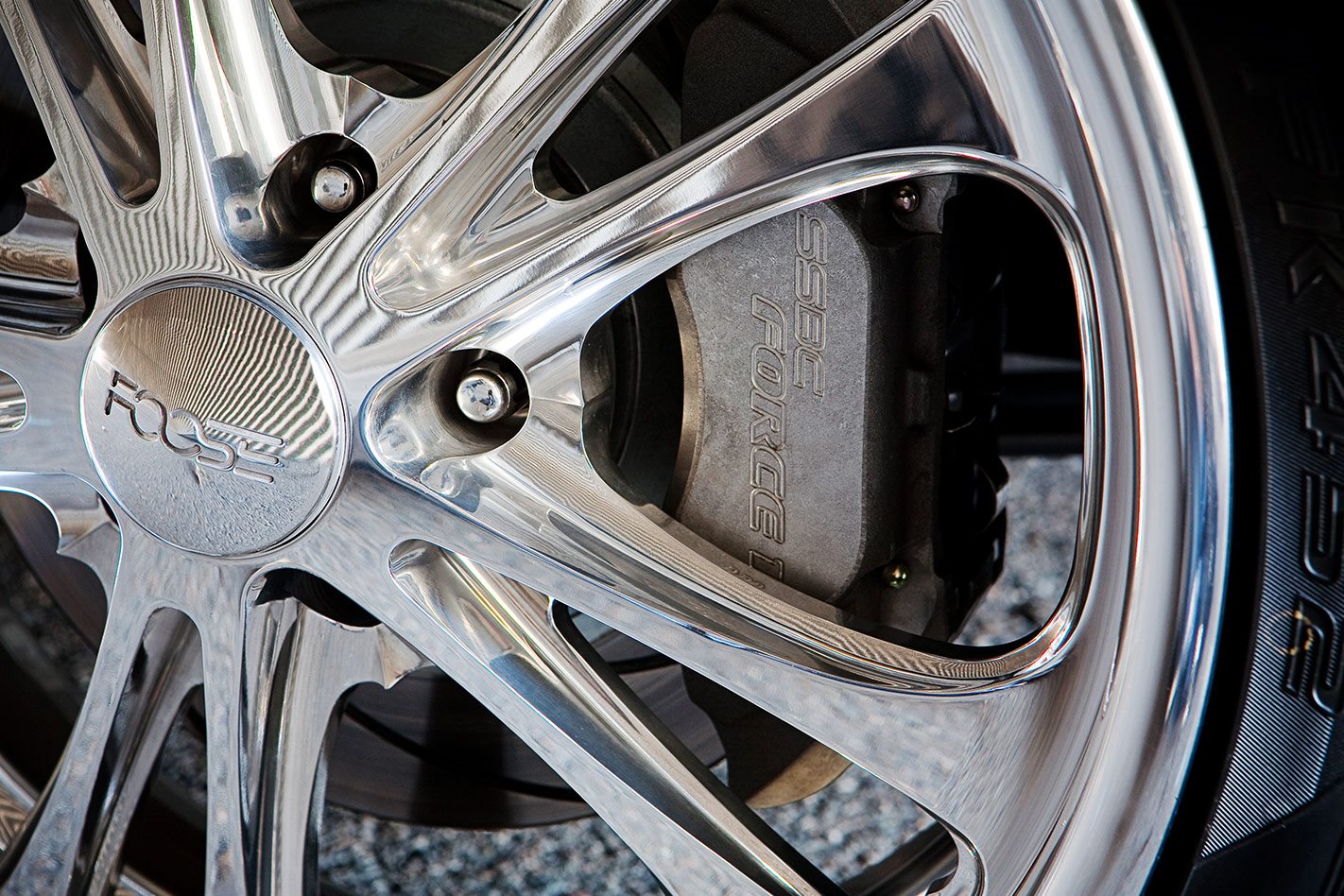 “My wife likes to go to bed early but I can’t sleep then. I go downstairs and work on the car,” he says. The bright-work wasn’t the only area to cop the Comitogianni touch.

“The radiator support was in silver and I painted it black because from a distance you could see the support through the grille and it looked unfinished.”

Under the bonnet, the 347 stroker wanted some attention too — Rob wasn’t a fan of the carby induction. 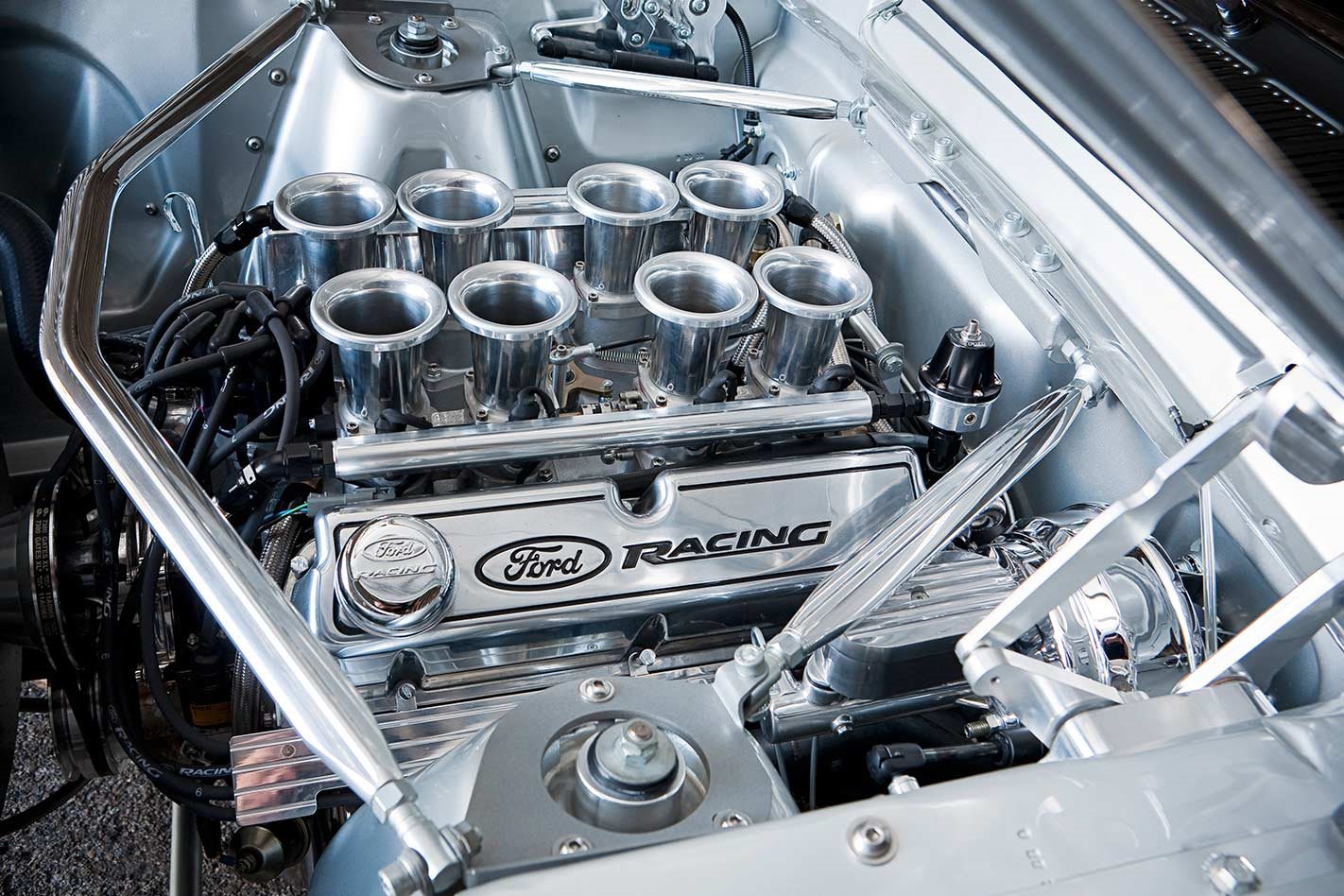 Nothing’s sexier on a naturally aspirated donk than eight injection stacks. Keeping it all under the bonnet maintains the Mustang’s classic lines while the healthy Windsor punches 350rwhp

“When the carby was on it, it took five or 10 minutes to get it kicked over. You had to pull the cleaner off and put Aerostart inside so that was sort of pissing me off. The car the way it is now is my dream car; kick it over and ‘bang’, you’re gone. You don’t have to wait for it to heat up.”

Rob’s not exactly clear on what’s in the engine but a pair of Edelbrock Performer heads top the Windsor block. No more century-old technology for this pony car — it’s been put on a carb-free diet. 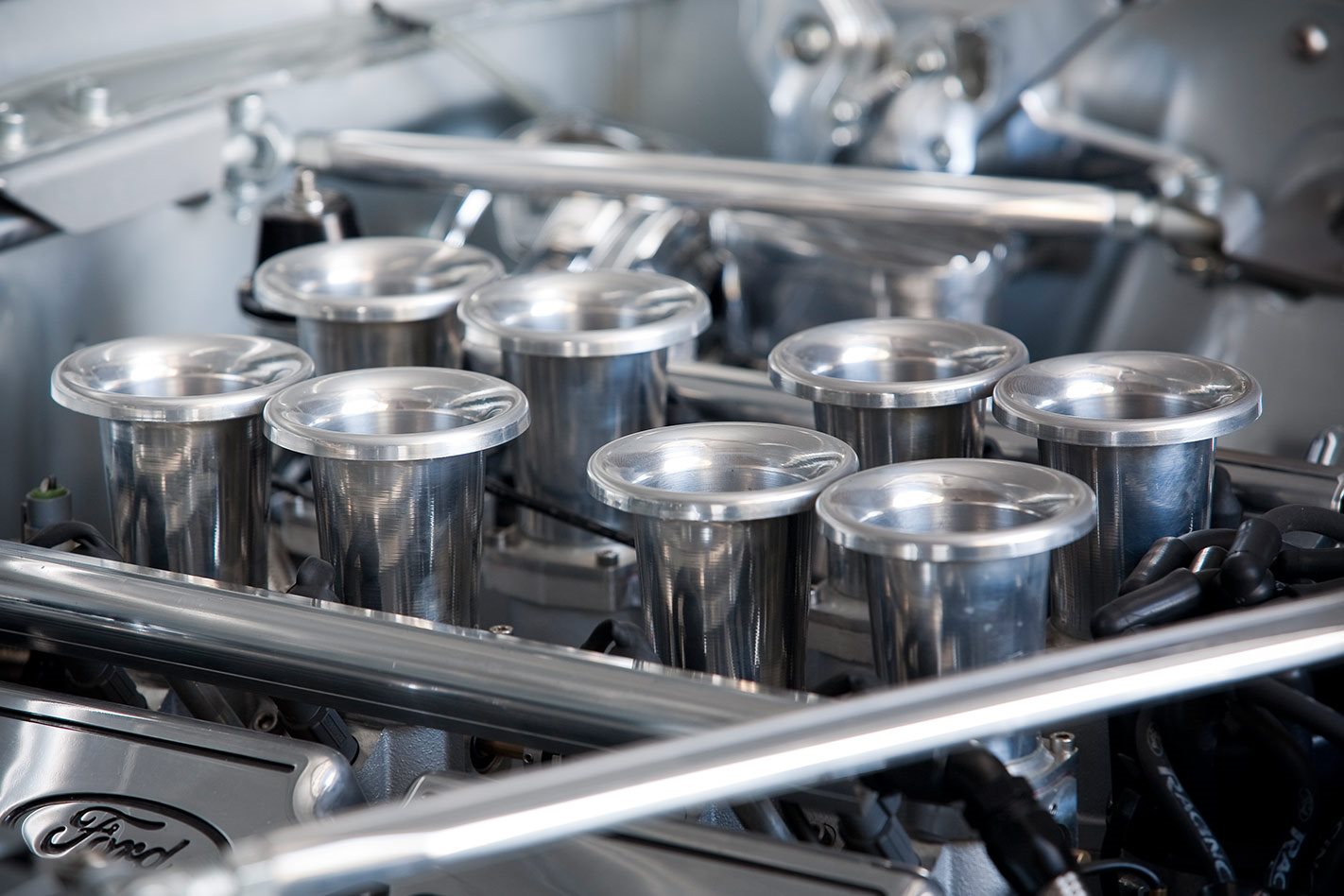 C&V fitted and tuned the DC&O 50mm throttlebodies and manifold, along with a MoTeC M48 ECU. Now the compact V8 produces 352hp at the treads and runs like a champ. On the rare occasions Rob takes it out. 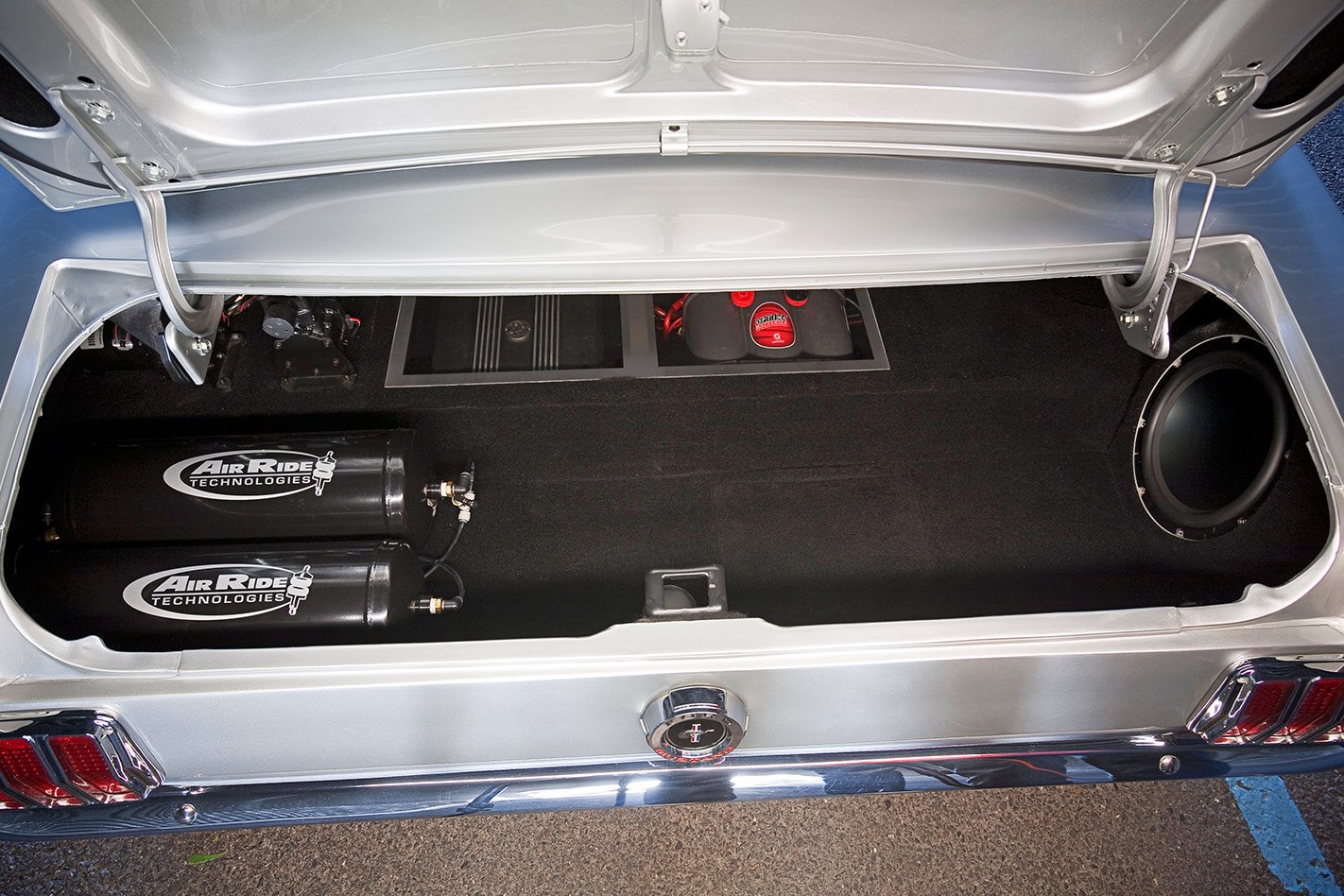 Battery, air tanks and stereo - it's all tidy and there's still room for a suitcase for a weekend away. Not much chance of that though; this pony car is mostly for show

Rob admits that it’s all about the show. “This car isn’t one you can drive every day. It isn’t even a Sunday car. I spent a lot of money on it and I don’t want to take it out. It’s really just a show car rather than a driver.”

He’s already has some success in the show arena, winning gold at the State concours, earning 986pts out of 1000. 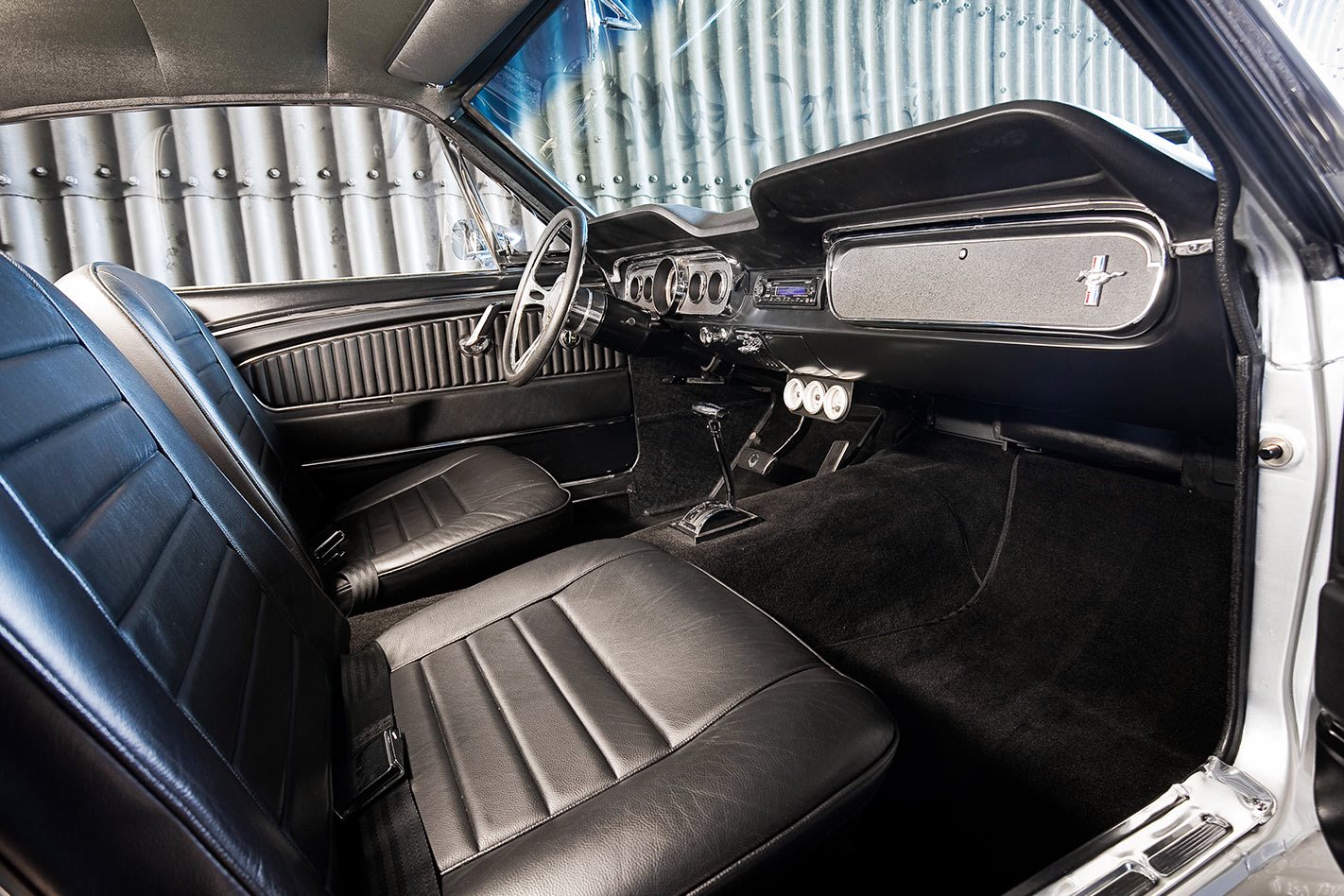 All that's been changed inside is the Billet Specialties wheel, airbag controls and the leather trim

“You should see the way they go through the car — they check everything, even the windscreen and moulds to see if there are any scratches. I’m very fussy, I want everything 100 per cent.”

So any plans to sell this car? 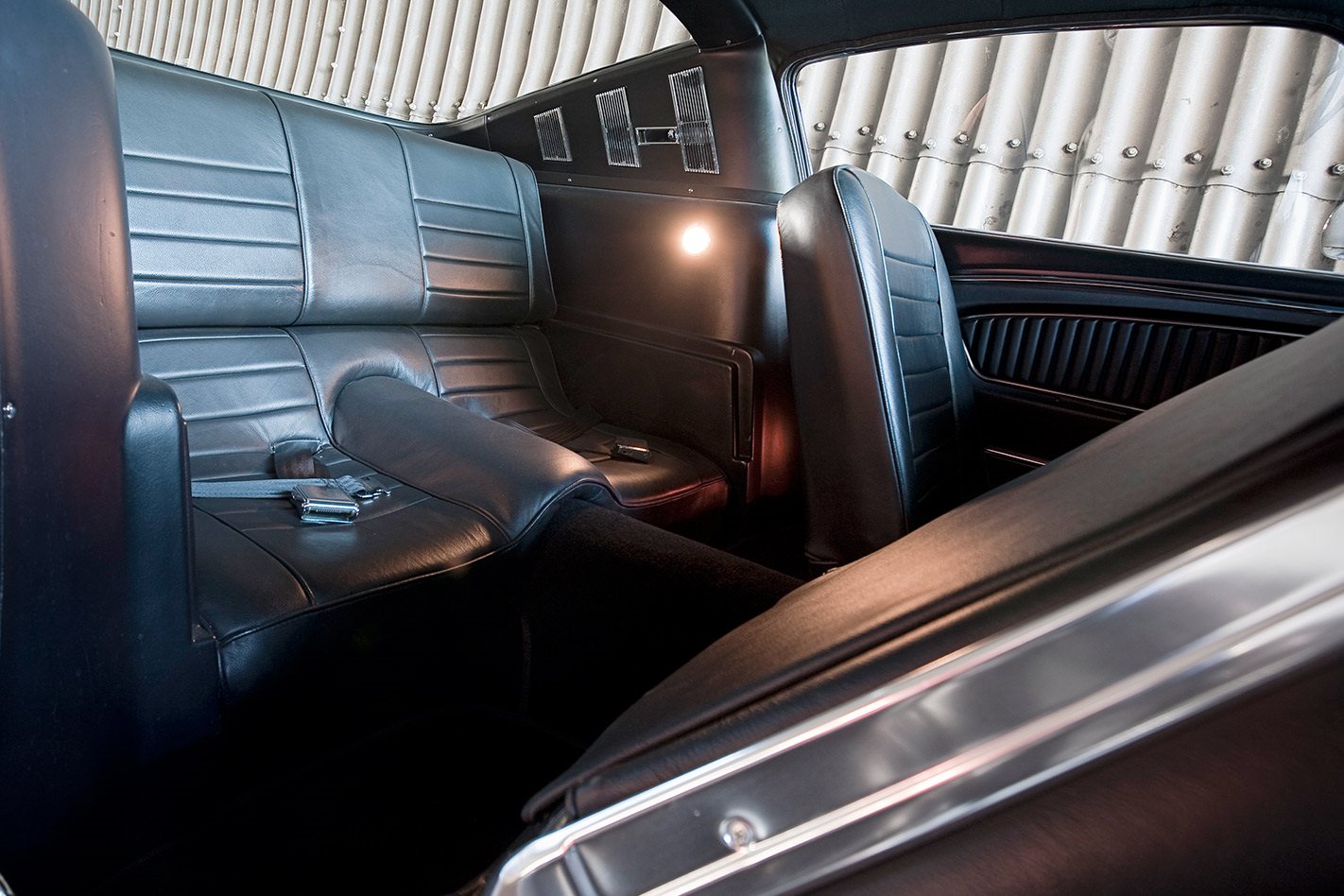 “No way! I just bought another one from Melbourne; it’s a C code. The original motor is a 289 but I just took that out the other day and it’s got 302 stamped all over it. I’m going to turn it into a Shelby lookalike.

“I told my wife that I bought that one so I can use it as a Sunday car and enjoy it. I’m not going to do it up straight away; it’ll take two or three years to build it,” he laughs. “I get bored, you see.” 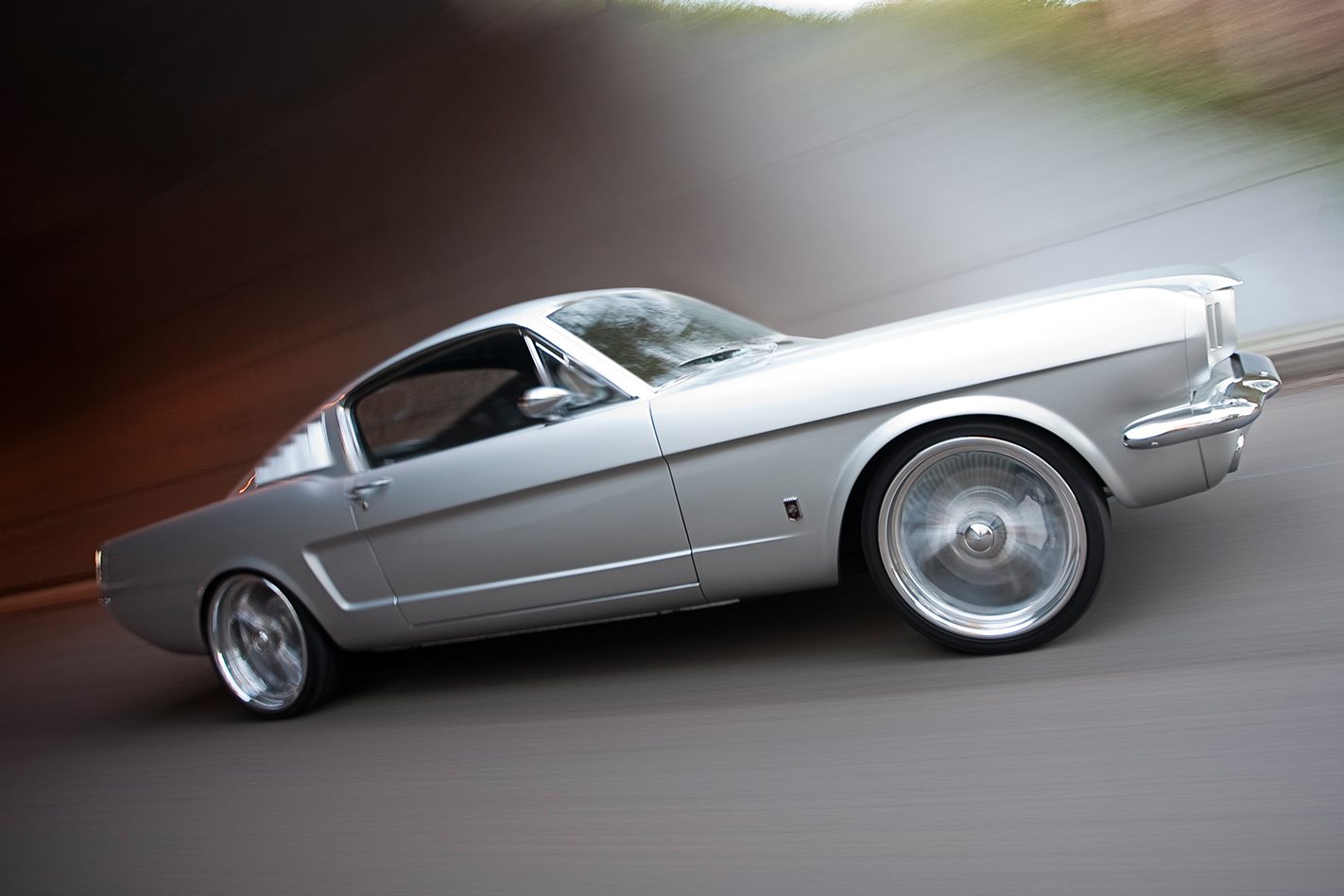