YOU’VE gotta be brave to buy a car sight unseen but that’s what Dave Ritchie did. After building a string of cool streeters, he was looking for a new project to have a bit of fun with. It happened that the Hillier boys were looking to offload their killer, all-metal, gold XP coupe. Dave struck a deal and soon had the coupe back at his Dapto base. That trip almost turned into disaster – the tie-downs let go, allowing the smooth coupe to roll backwards off the trailer. Fortunately its wayward journey stopped with the back wheels precariously hanging in mid air, beached on the undercarriage. Not the start Dave was hoping for. 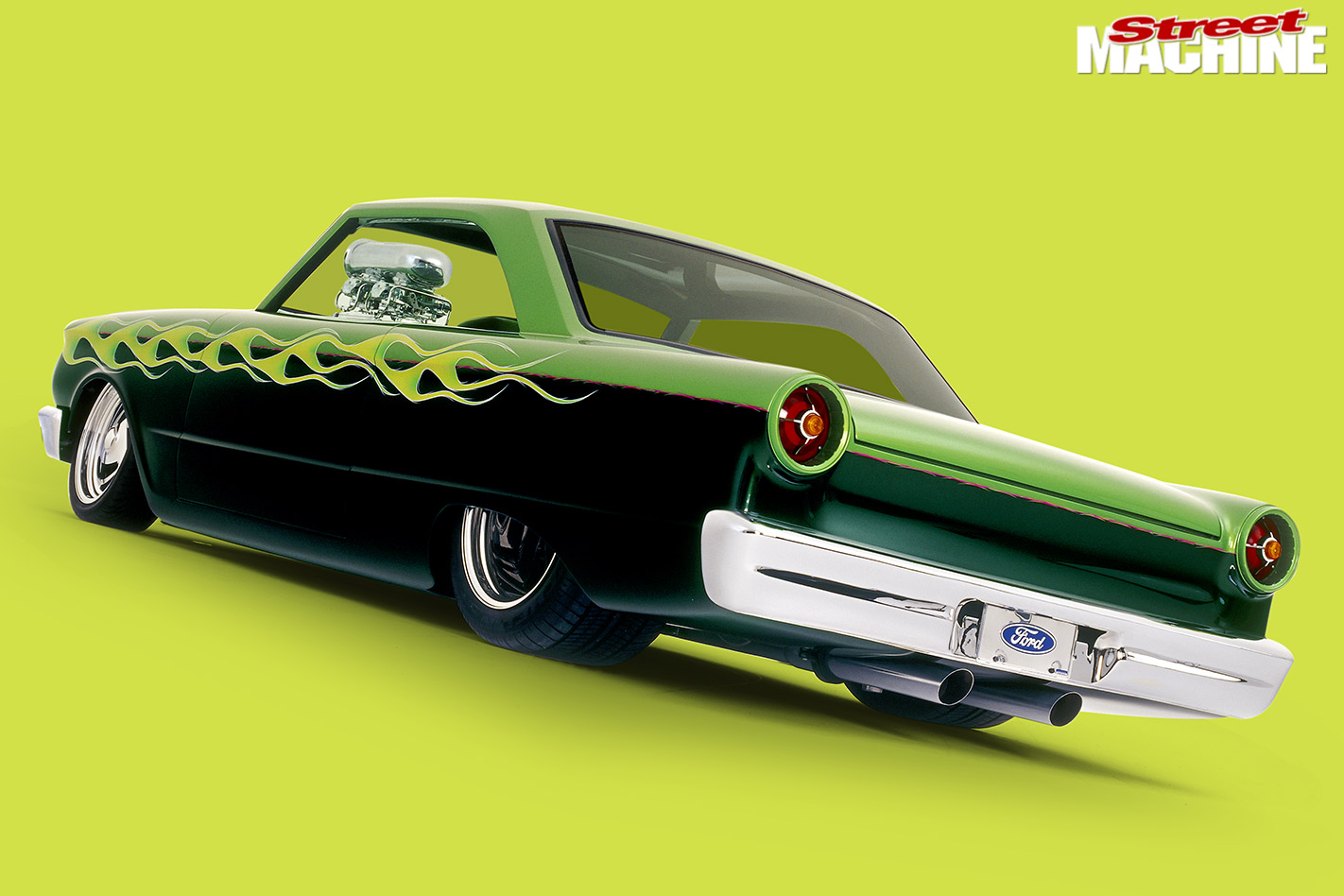 After a few running repairs and a quick clean up, things settled down. Dave and the coupe enjoyed success at various shows including a spot in the coveted Summernats Top 20 – he even hit the streets of Wollongong for a bit of Saturday night cruising.

“The car’s easy to drive,” says Dave. “My girlfriend’s driven it many times. We were swamped by crowds every time we stopped. Seeing people’s reactions to a car like this cruising around was awesome!”

However, it wasn’t before long before Dave starting thinking about modifications. He decided on the rebuild after qualifying for the Meguiar’s Showcar Final. After all, what’s the point of turning up to Australia’s highest-calibre show with a five-year-old car? 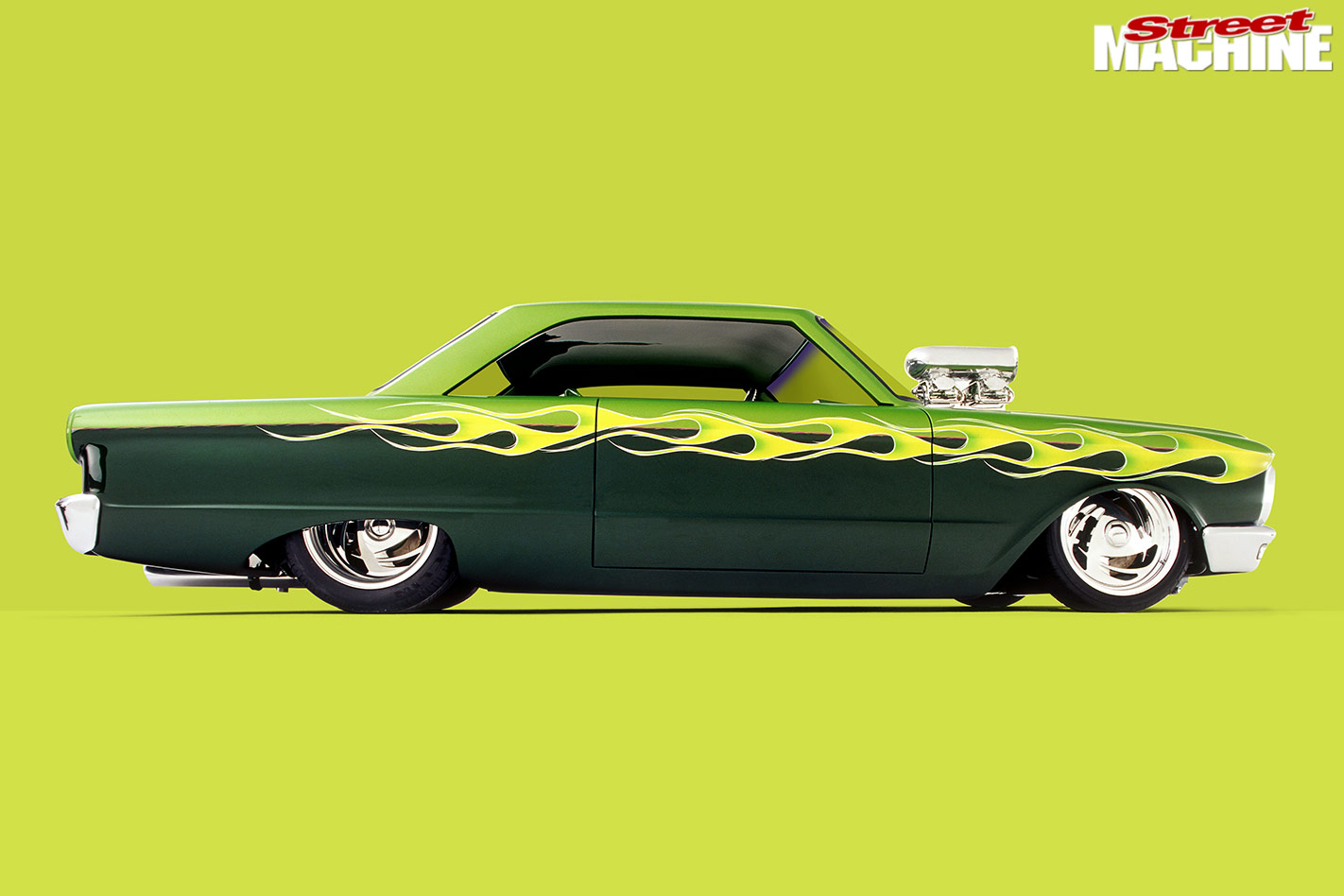 “I started planning in November 2003 but I didn’t want to get underway until after Summernats,” remembers Dave. “It was a big decision to pull the car apart. I was really concerned about ruining it.” With the Meguiar’s Final only five months away it was no time to be shy, so the XP was stripped to its undies and mounted on a rotisserie.

First came the airbag system for that oh-so-low ride. A fully fabricated box-section chassis hides all the brake, fuel and trans lines. Hanging off this is a fabricated twin A-arm front end (using HQ Holden stub axles) and a triangulated ladder-bar rear. Dave added AirRide Technologies ShockWave double convoluted airbags up front and rolling bellow ShockWaves out back. Feeding the system is a three-gallon tank in the left rear quarter, behind the tail-light. The system is remote controlled, with the solenoids and valves in the false floor under the passenger seat. 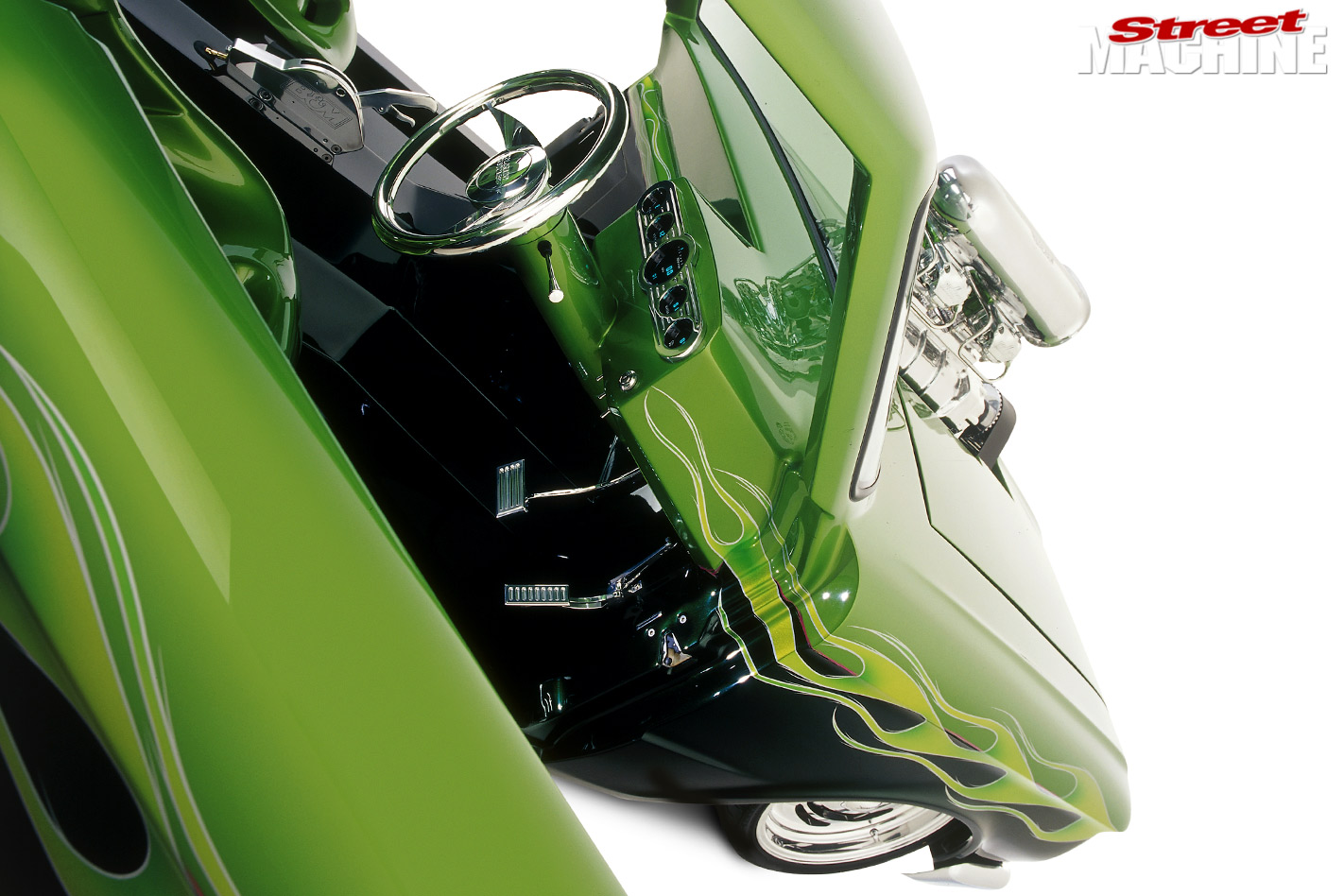 Brakes were stepped up with 300mm VT slotted rotors and polished, twin-piston VT calipers. Steering is handled by a UC Torana rack mated to an ED Falcon steering column with a Colorado Custom billet steering wheel. A Dakota Instruments digital dash was imported by Ziggy’s Hot Rods, which also sourced the 17-inch Budnik wheels with a staggering 10.5 inches of offset on the rear.

Next it was off to Drago Ostric at Sefton Smash in Sydney for suicide doors and heaps of other metalwork. There was drama over mounting the relocated door hinges. Normally the interior trim panels cover the mounts but in the XP all the interior trims panels are steel, welded and smoothed into the body. It seemed the only option was to cut the inner door skins, mount the hinges and fabricate flat plates which clipped back into place like a regular door trim. 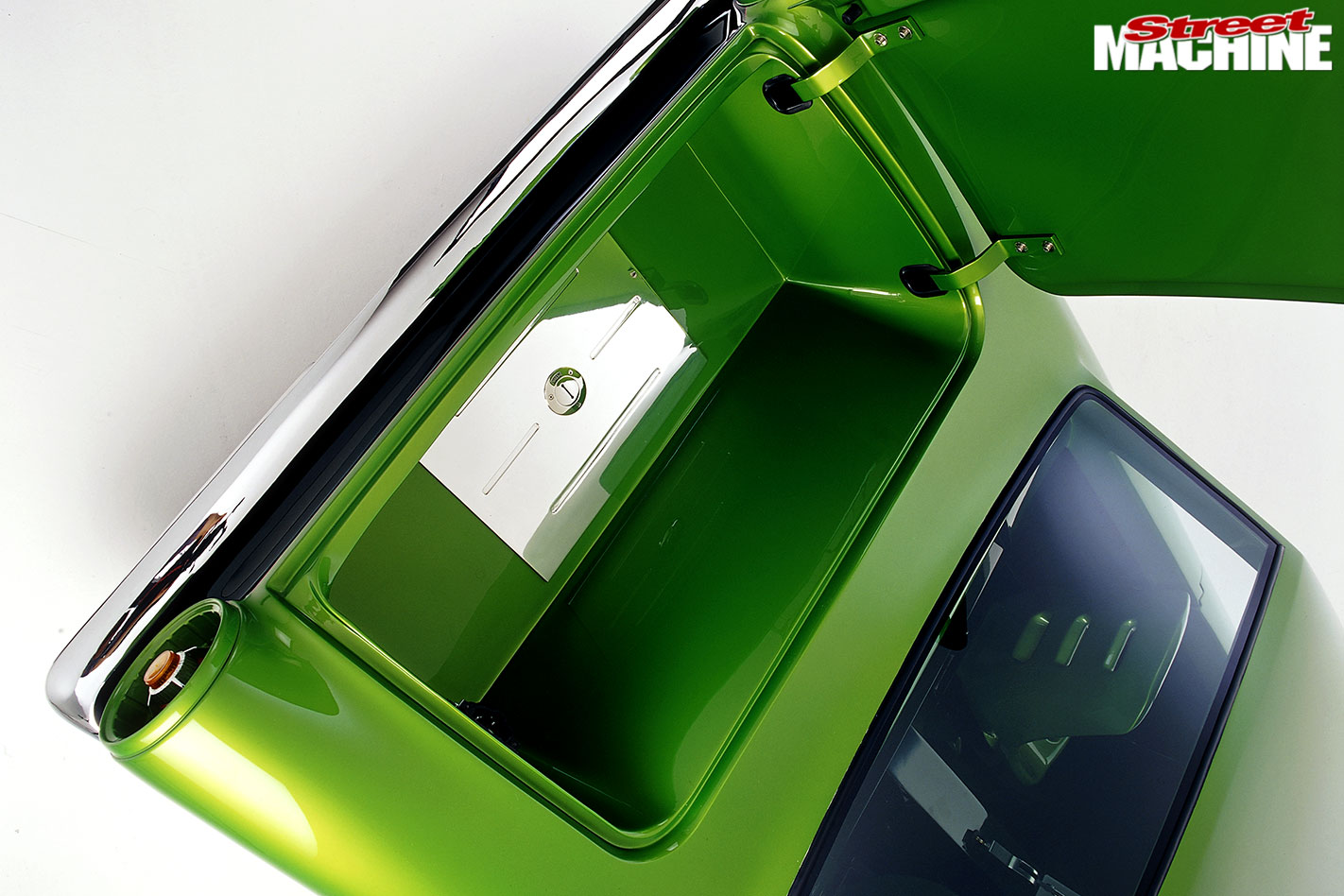 “If we have to do it like that, forget it,” said Dave. So Drago and his crew designed hinges with a 90-degree bend, allowing them to mount to the doors’ trailing edges. VH Commodore strikers and lock mechanisms give the doors a precise click-click shutting action.

The interior rear three-quarter panelling had to be cut away and replaced so bracing could be added to support the weight of the all-steel doors. The bracing was tied into the fully integrated tubular roll cage which threads through the car. With permanently fixed hinges and little adjustment, special attention was paid to the shut lines and mounting fixtures. The conversion took about 200 hours!

The front guards were welded and smoothed into the cowl and sills to form one flowing piece. Filler panels were also added to the guards’ trailing edges to blend them into the A-pillars. This smoothing process continued to the front valance panel, radiator support panel and bonnet hinges. The original big, ugly bonnet catch was replaced with two subtle, solenoid-activated plungers in the lip of each front guard. The system is operated via remote control just like the doors and boot. A one-off, 25-litre fuel tank was flushed into the boot floor. 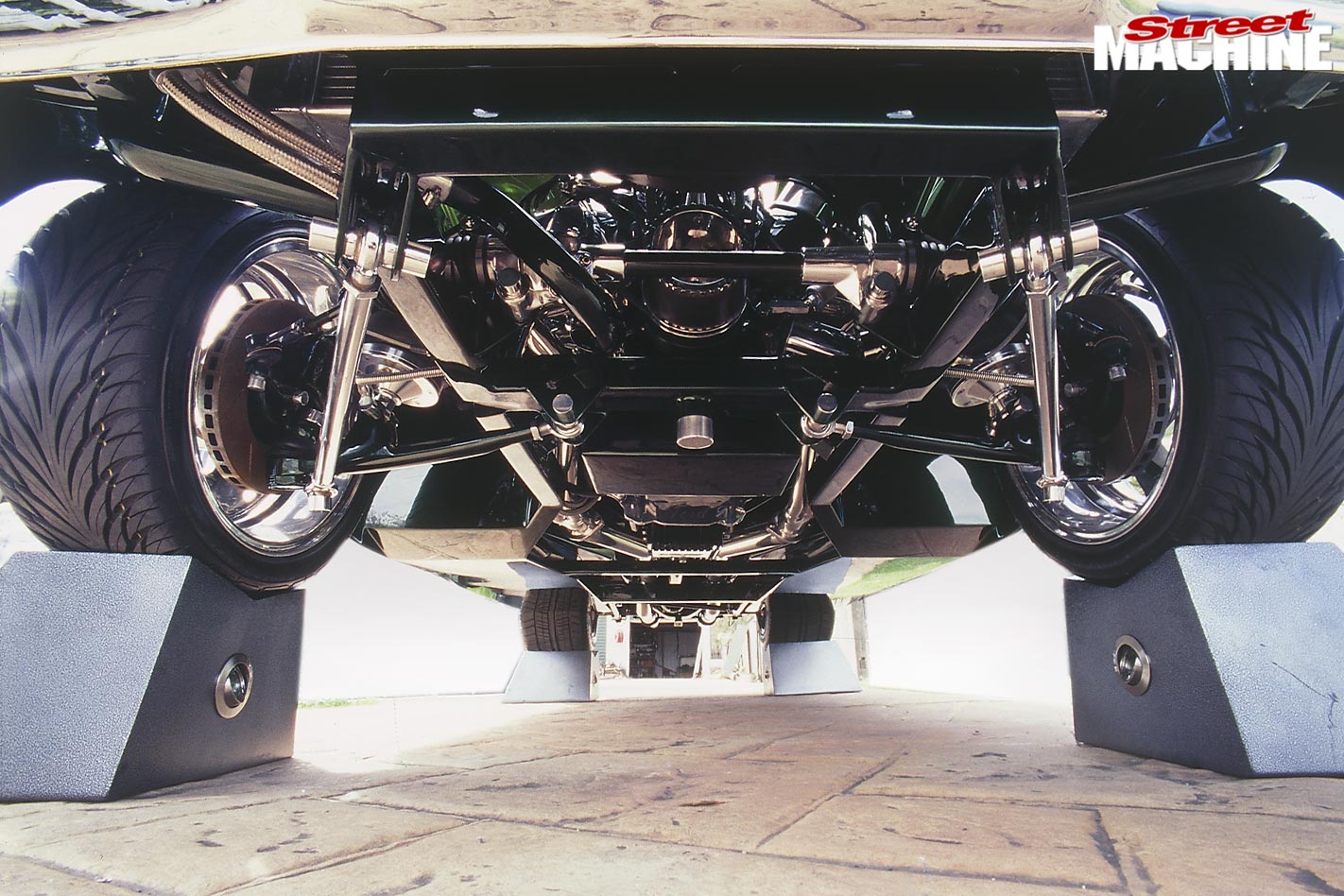 The final HoK Organic Green bottom and Lime Time Green/Gold Kandy top design was settled five minutes before spraying began. Although the finish of the mods was good, to get the car arrow-straight Frank Jnr and Frank Snr spent two solid months meticulously blocking everything thing back.

Before laying on the coloured coats (read more, below), the car was left to sit and harden in high-fill while suspension components, smoothed diff housing, fully deburred engine and the running gear copped the green treatment. 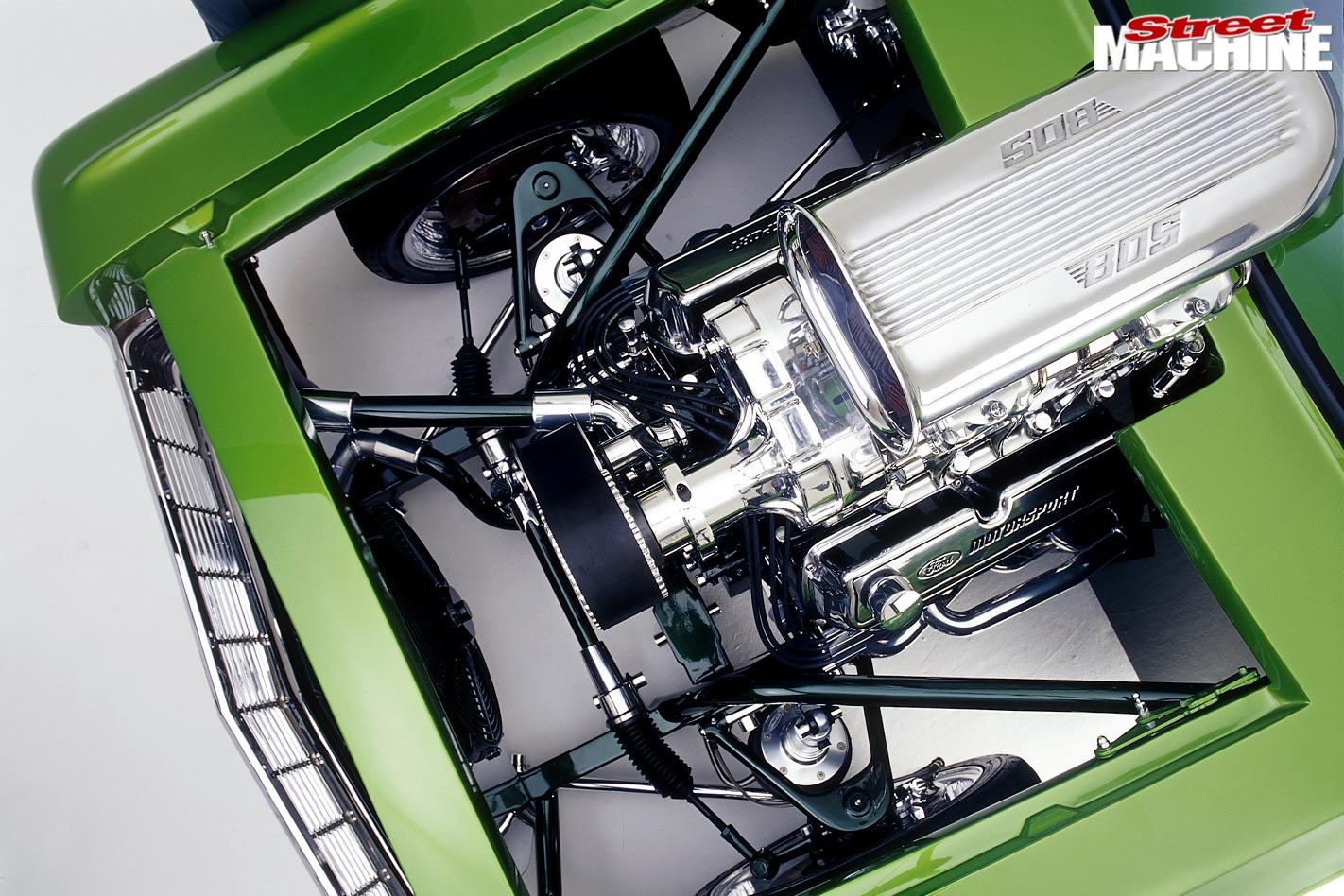 Due to Dave’s indecision, Matt Egan had to lay out the flames four times! He even flamed the three-inch Hardie Spicer tailshaft.

While the flames are cool, they created more dramas for Frank’s. Paint build-up from the graphics changed the bodywork profile. Eight layers of clear had to be laid down so they could block everything flat again. Long blocks, shaped to suit the XP’s complex curves, were used to get the car mirror-smooth. Run your eye down the side and there’s not a ripple to be seen. Impressive, considering the XP took enough paint for three cars! Time was tight – Matt finished pinstriping six hours before they hit the road for MotorEx. 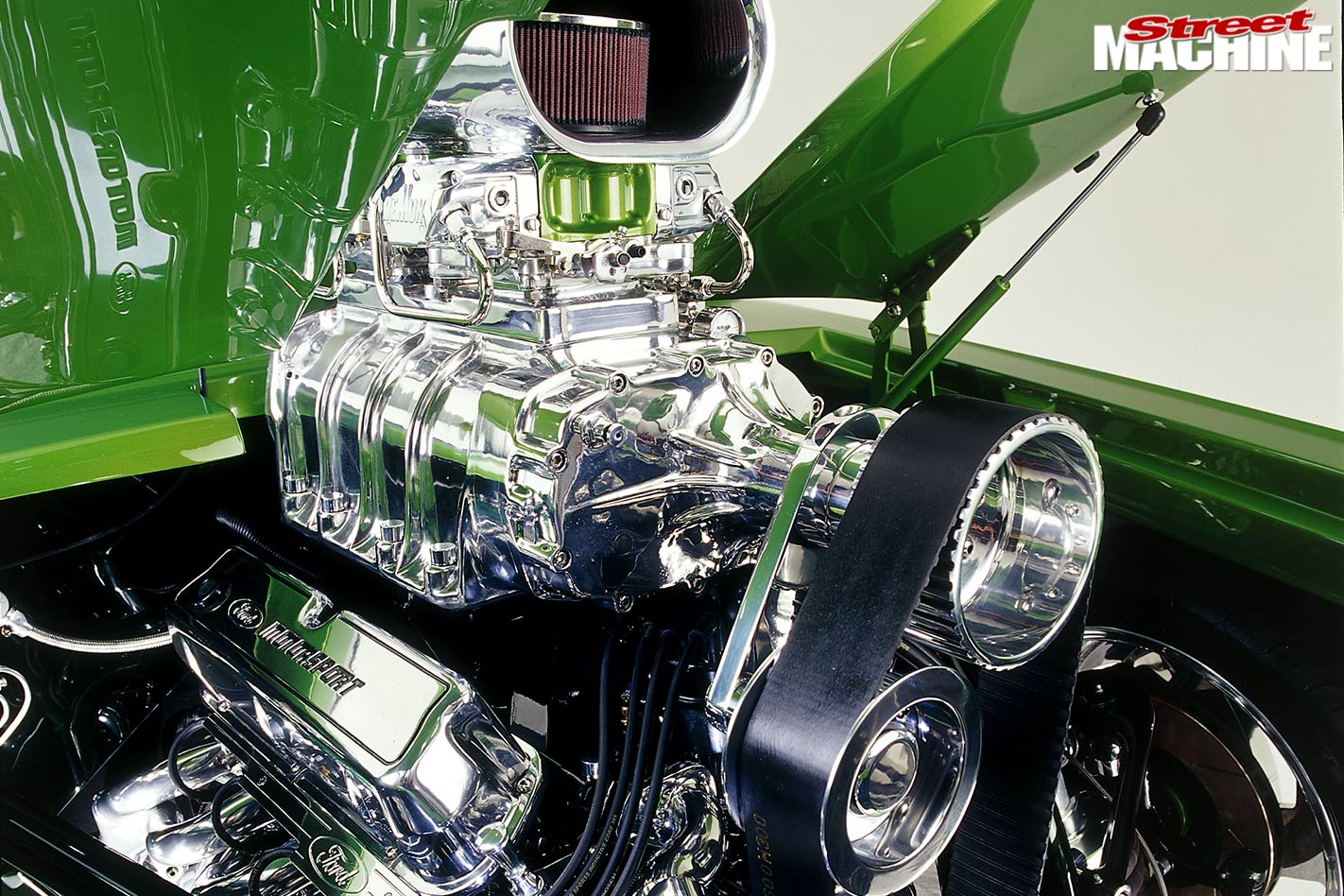 Ten days out from the unveiling, Dave’s daily work routine ran from 7am until 4am the following morning. It didn’t look like they were going to make it but he pushed like hell anyway.

Two days out Dave slipped with the die-grinder while fitting the new gauge cluster! A panic call to Frank had him touching up three semi-circle scratches at 3pm on the day they were due to leave. The XP was due at MotorEx by midnight. At 1am it was loaded on the trailer. On site, seven guys spent eight hours detailing and setting up. It was a monumental effort to get the car done in just five months.

“Never again,” says Dave. “It felt like ten tonnes came off my shoulders when the covers were lifted off. Without good organisation and a firm plan we could never have got it done. Everything went to schedule and we did everything on the original plan.” 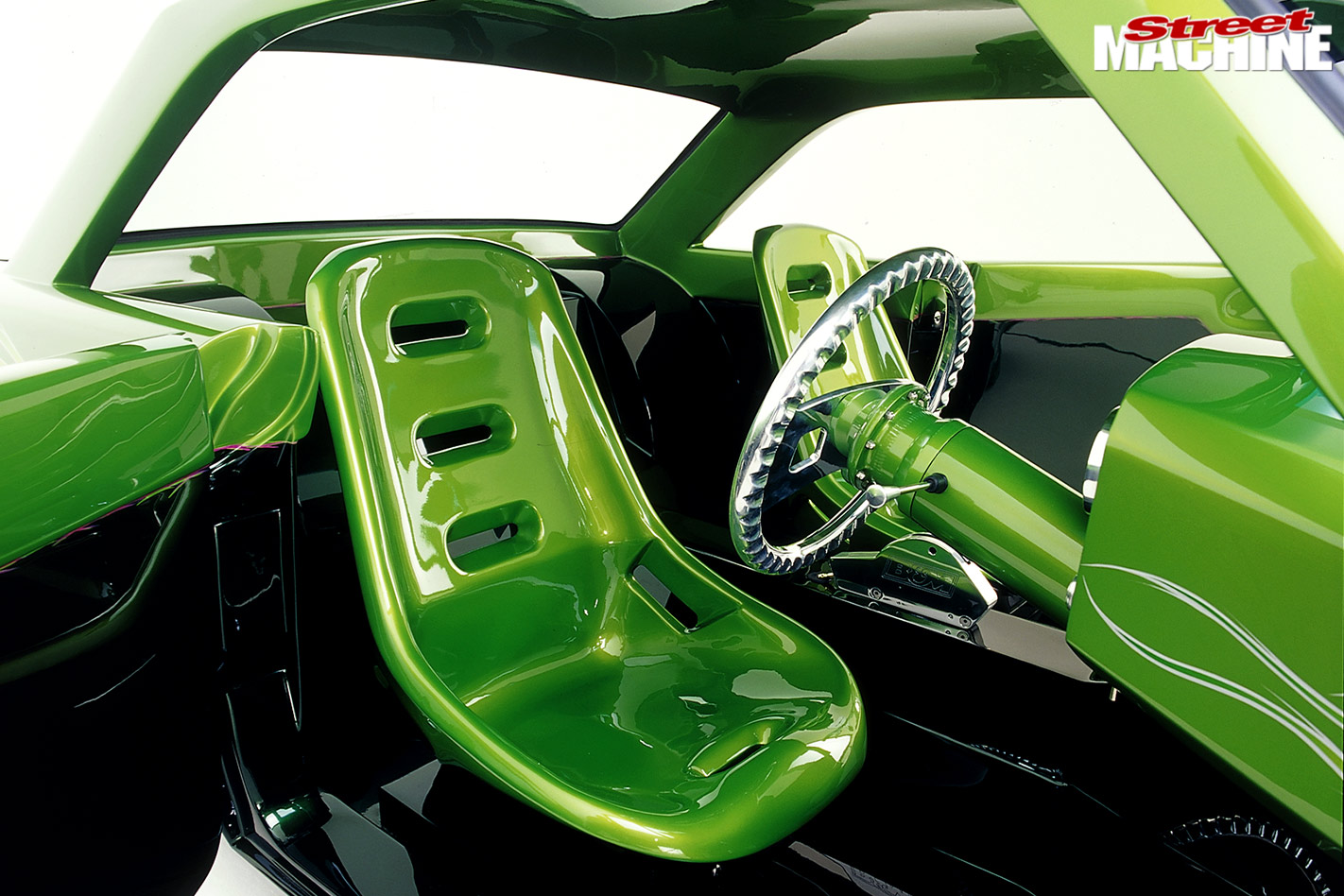 If it wasn’t for a big effort by everyone — especially Drago, both Franks, George at Mirrorfinish, and Tom and Brian from Webb’s Auto Electrics — the car would still be unfinished. Special thanks to girlfriend Bec for dinners in the garage, endless coffee to get Dave through the nights, and blisters from hours of polishing.

Three shows out, Dave is wrapped with the response the car’s been getting. Everyone loves the colour scheme, the metalwork and detail. Funnily enough Dave considers himself more of a Holden guy. So why tackle a Ford?

“I can appreciate a good car and quality workmanship no matter what badge is on it,” he reasons.

No wonder his XP turned out such a stunner. 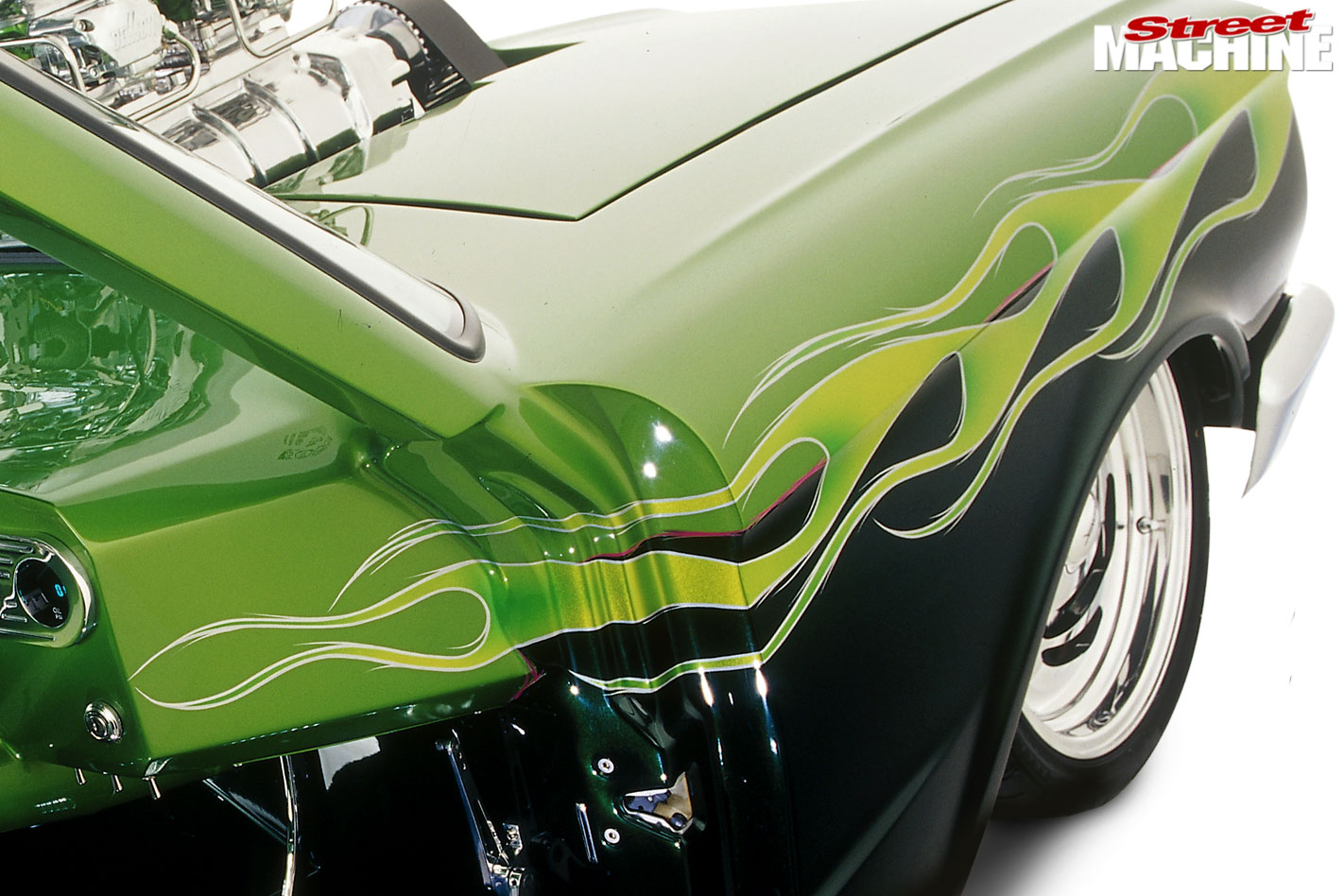 Frank Pudarich of Frank’s Paint and Panel is responsible for a number of elite-level cars but he says this XP “is the hardest car I’ve ever sprayed”. Paint maestro Owen Webb agrees: “It’s like it’s carved from solid — it doesn’t stop or start anywhere!”

That’s a nightmare as there are no natural edges to mask-off at, but you need to mask-off to spray the inside and outside separately. Judges make a point of trying to find mask lines. To stop dry edges, the inside was sprayed in one hit: the car was rotated onto its side while Frank stood up through the door. Even in the well-lit spray booth, it was tough ensuring full coverage.

“I had to spray with a torch in one hand to be sure I got into all the corners,” says Frank. “We then cut and buffed the interior and undercarriage with a tiny three-inch Dynabrade and three-inch 3M buffing machine. It was a mountain of work.” 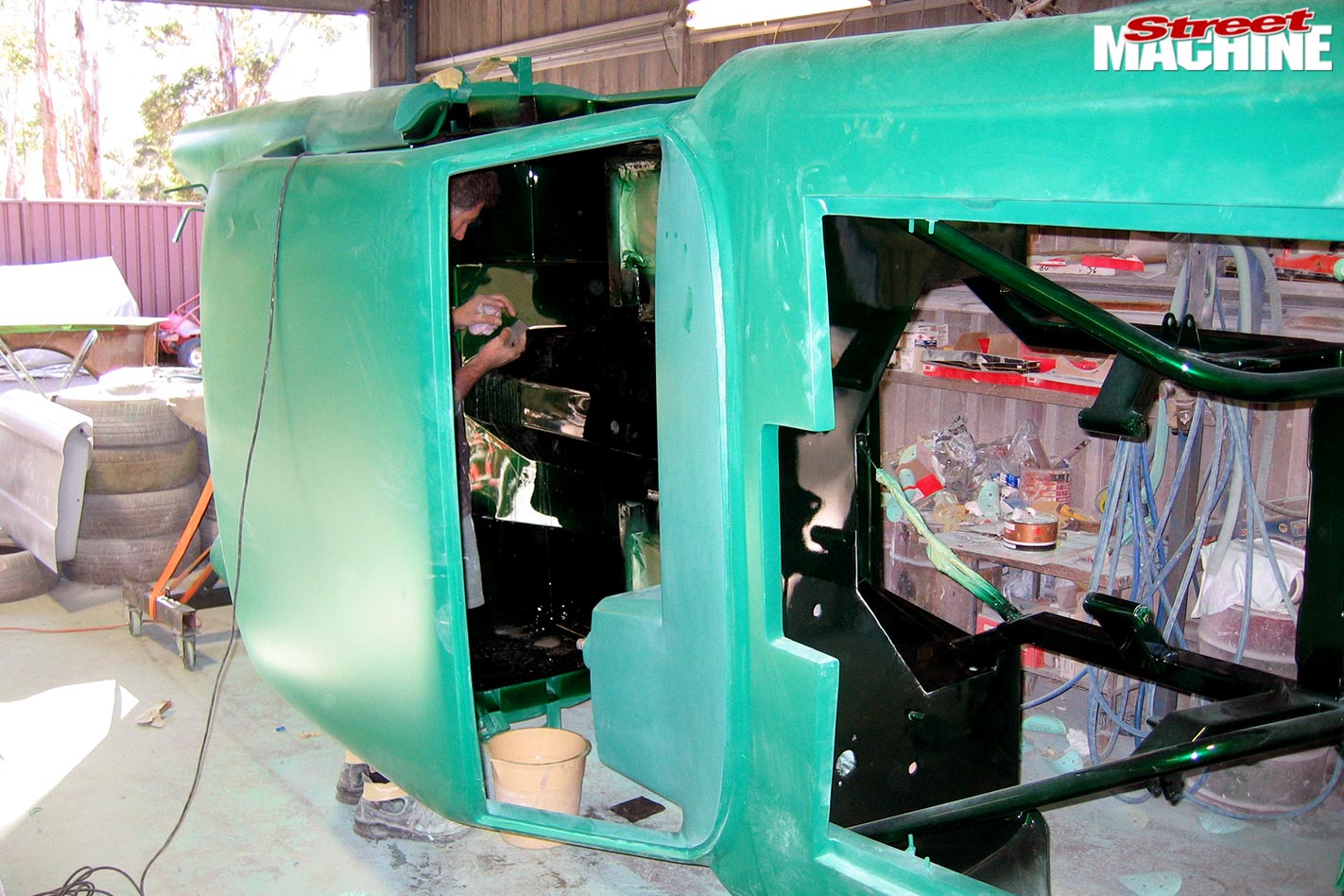 It was Troy Hillier who originally saved the ’65 XP coupe from rusty oblivion in 1998.

“I bought the car from a mate,” he told Street Machine at the time. “It was sitting in his backyard and almost rusted away.”

Troy and brother Clayton are the coachbuilding masterminds behind Hillier Conversions up in Tenterfield, and the steady procession of quality limos and hearses leaving their workshop suggested that the XP was in with a solid chance of immortality at their hands.

From the moment Troy began work on the car he had 16 weeks to his self-imposed deadline – Summernats 12.

After insanely long hours the car had acquired many of the showstopping hallmarks it still bears today. 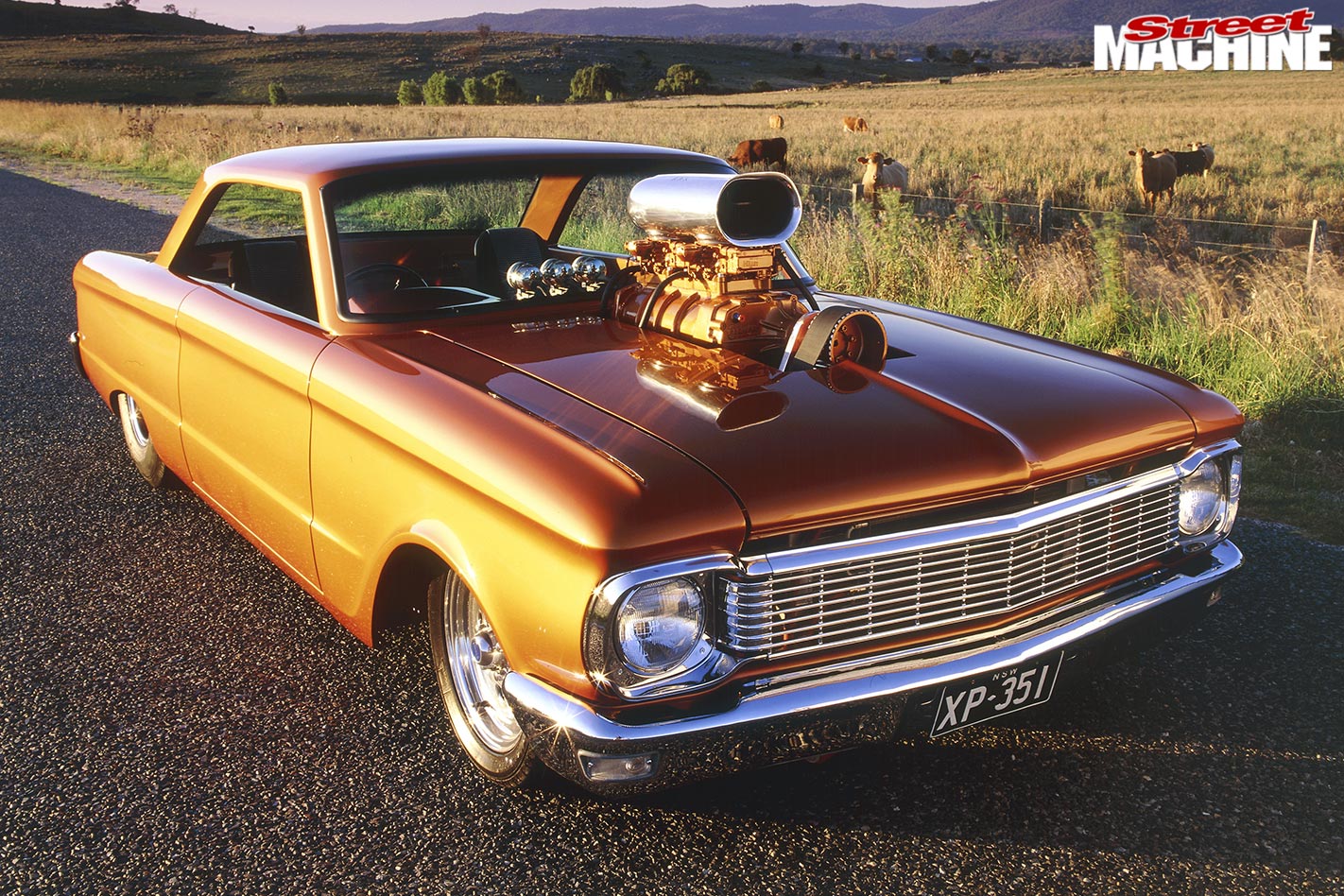 And, naturally, this is when the 30-thou-overbored 351 Windsor arrived, and with it the Fisher 6/71 blower. The inlet manifold was fabricated and the carbies in those distant days were twin 600 Holleys. The donk would receive the Dart flow-benched heads it wears today, a High Energy sump and Mallory ignition.

Troy Hillier’s original driveline comprised a manualised C4 auto (though with a 2500rpm stall then) hooked up to a nine-inch with Detroit Locker centre running 4.56 cogs and 31-spline axles. The rolling stock, however, is different: before Dave Ritchie’s Budniks were Cragars, 15x4 front and 15x15 at the business end.

But, as Editor Oastler noted at the time, it was the bodywork that really grabbed the attention. The floor, boot, engine bay and hoodlining were, he wrote, “razor-sharp show quality”. And that side-opening boot was drawn from the firm’s hearse-building experience, using hearse side door hinges to achieve the unusual effect.

Inside were the usual suspects: Hurst shifter, Auto Meter gauges, SAAS wheel. But the car’s calling card was that rich paint – Pro-Tec two-pack Tiger Gold from the GMH colour chart, three coats of base topped with three coats of clear.

And that, as they say, was Chapter One. 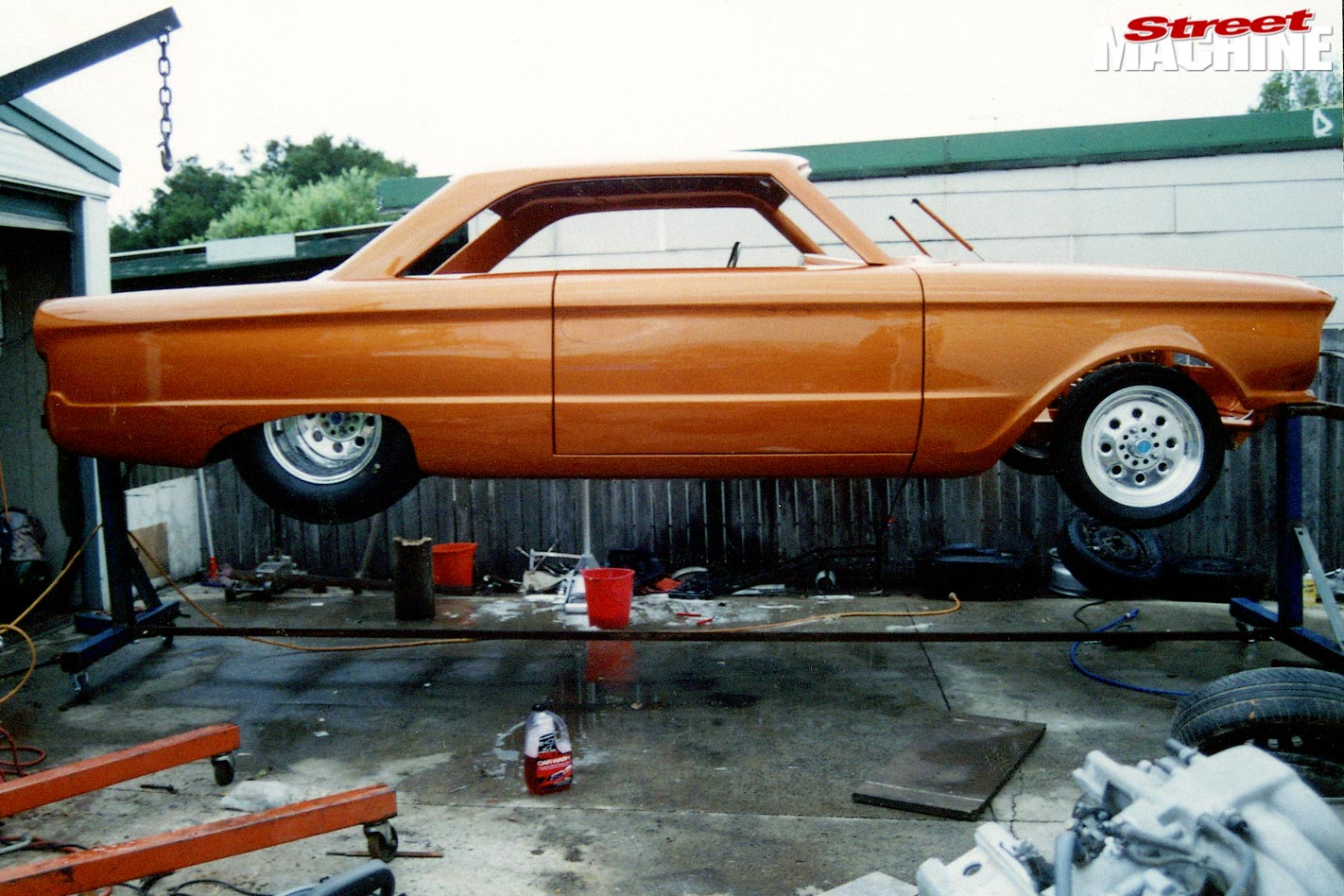 1. Stripped of most of its running gear, the XP was up, up and away. The rotisserie had plenty of height to put everything at a comfortable working level. It was scary turning the car upside down for the first time. 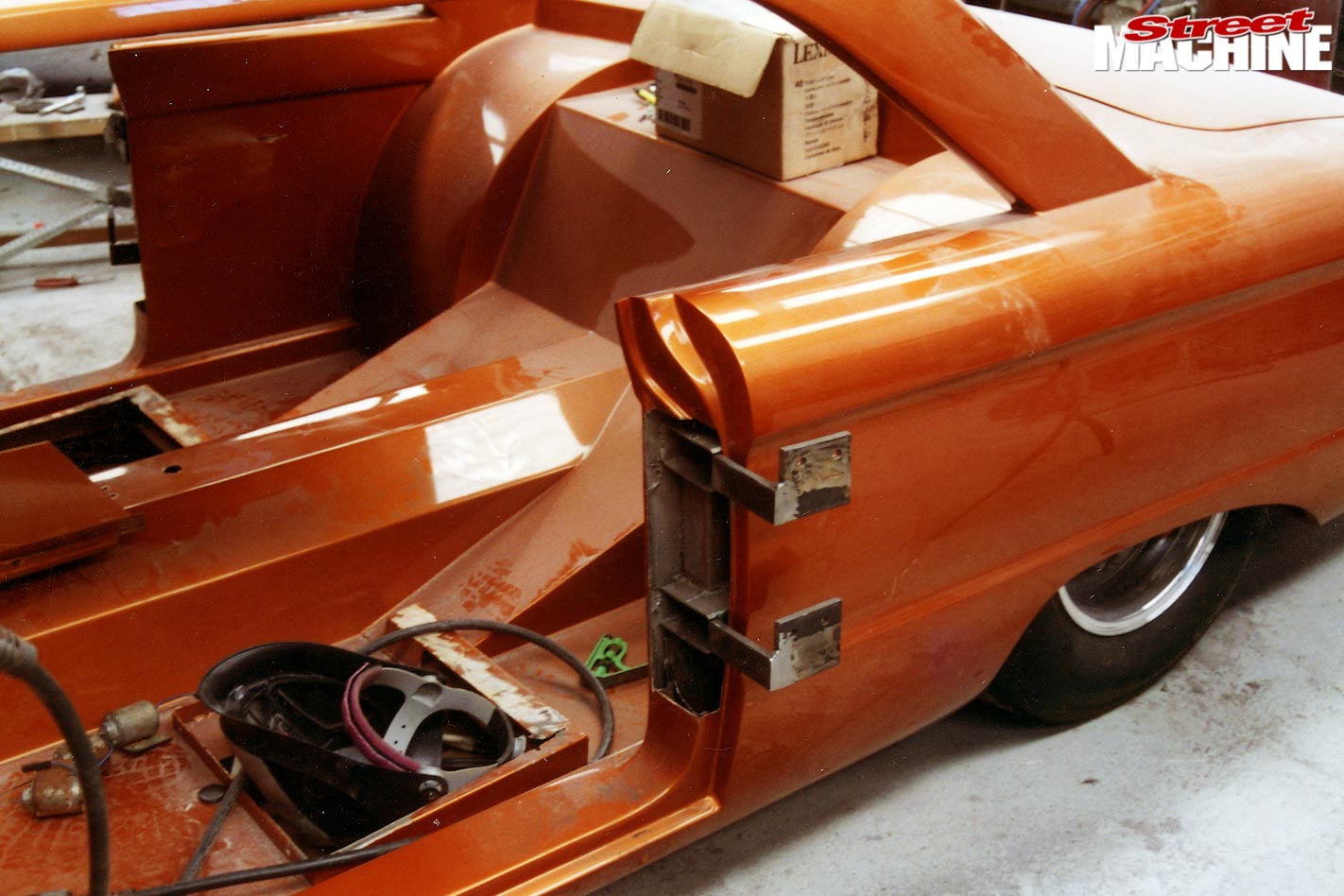 2. Reversed factory hinges were simply not going to do the job. Sefton Smash had to design and fabricate this one-off set. They’re now a permanent fixture of the XP and bolt to the trailing edges of the doors. 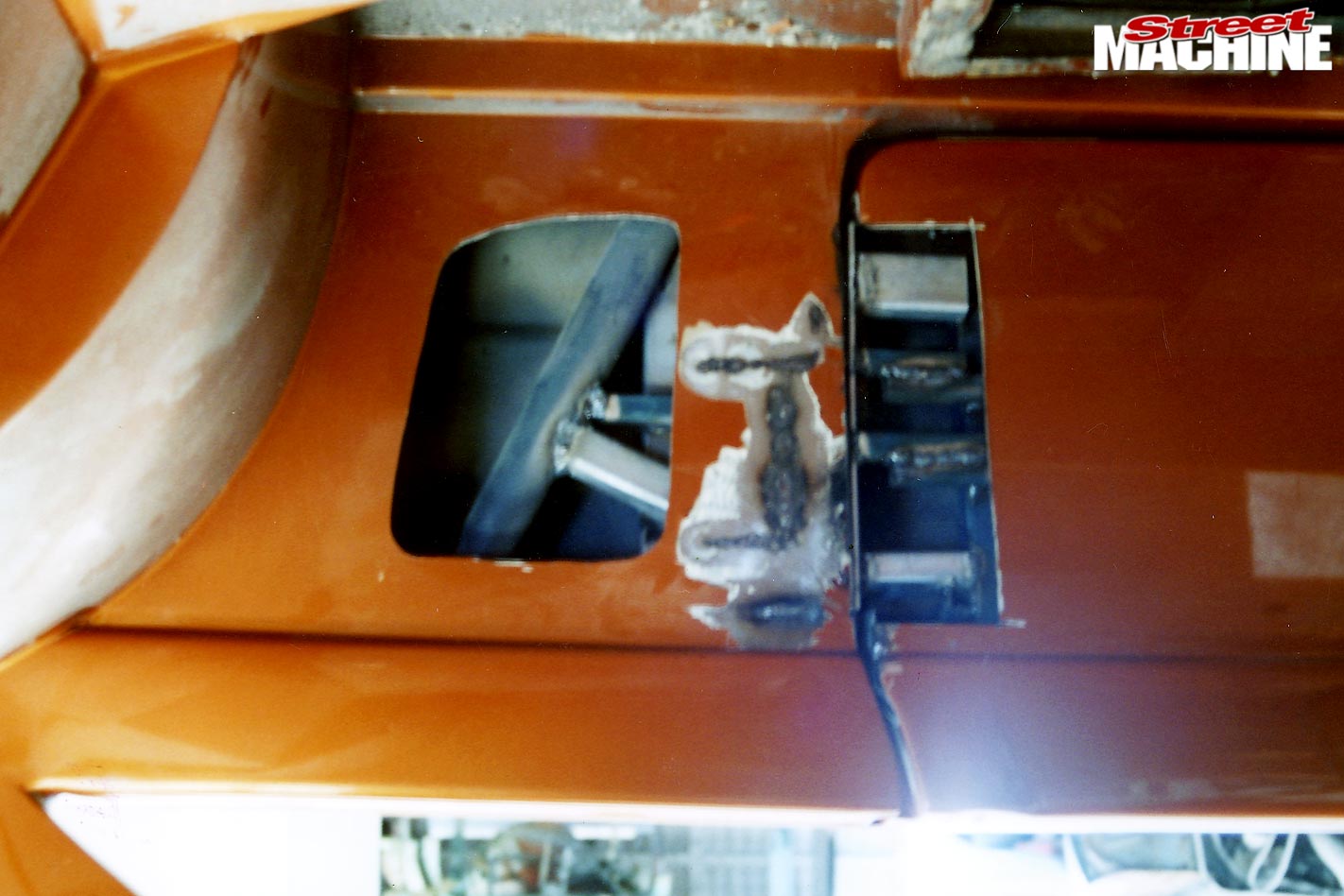 3. An extensive roll cage invisibly snakes its way through the XP. The new hinge mounts were tied into this cage to ensure the considerable weight of the all-steel doors didn’t lead to door droop later on. 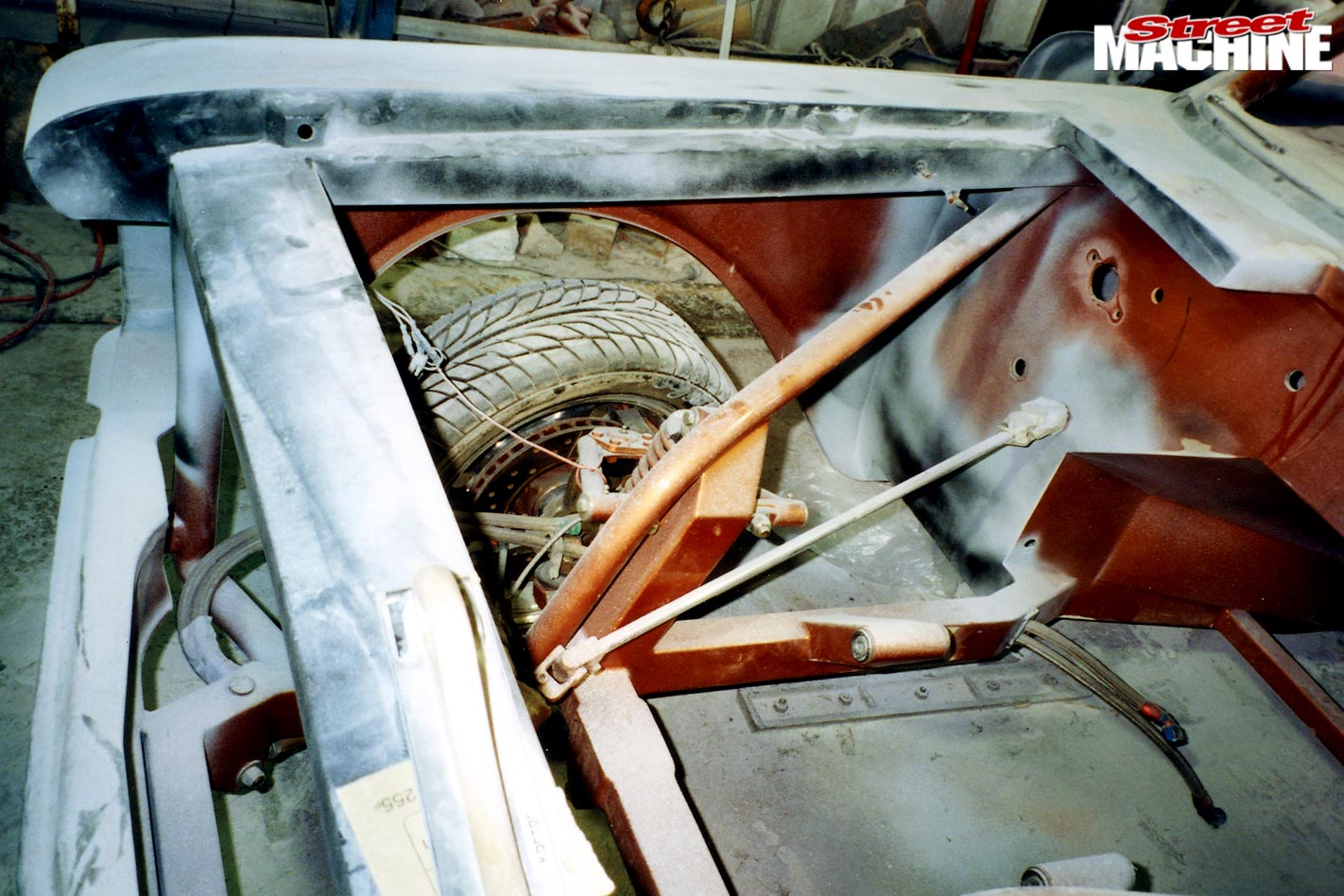 4. At the top left of the picture you can see the small extensions on the guard lip for the new bonnet pins. Note also how the guards have been tied into the body to form one smooth, flowing structure. 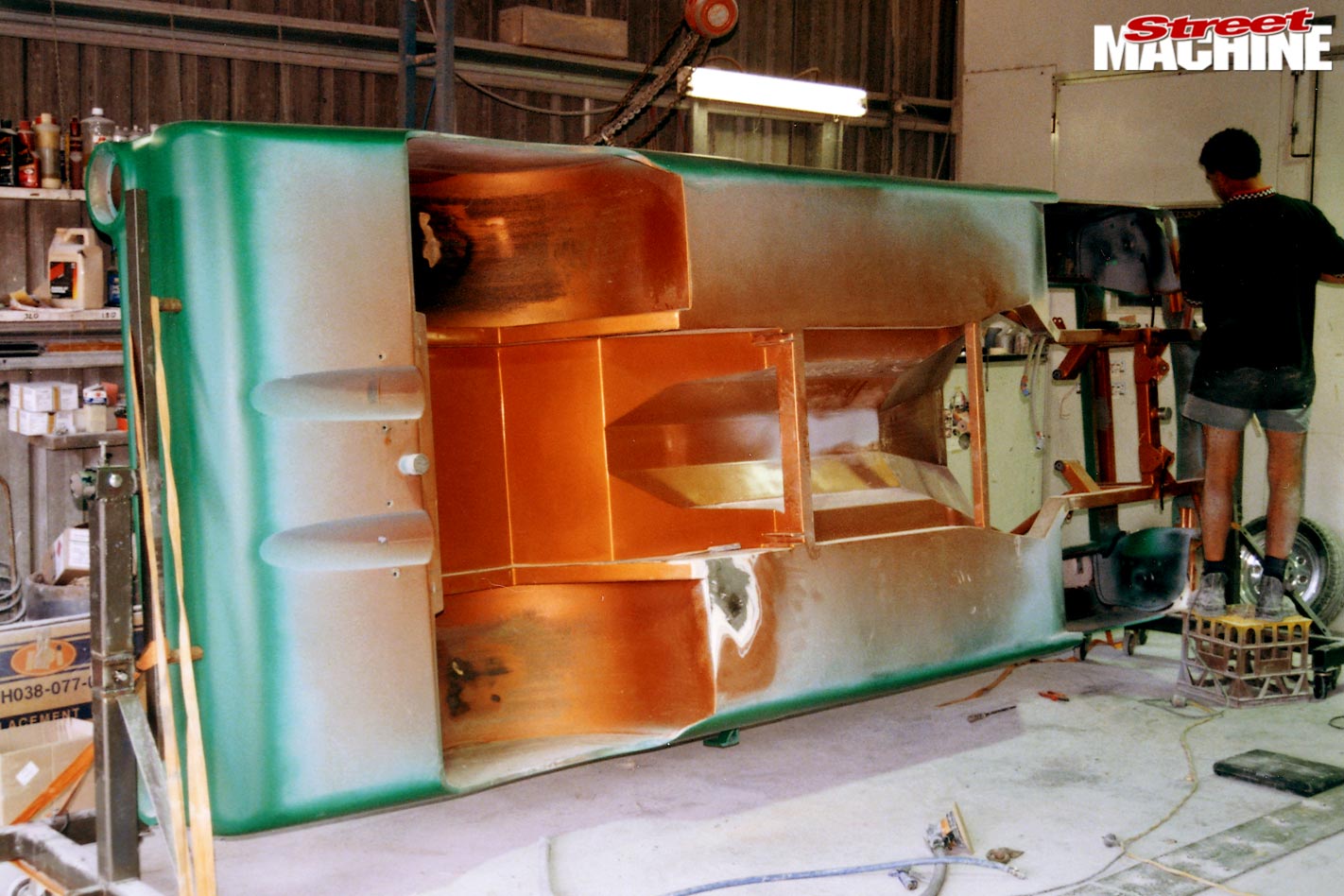 5. Smooth as a baby’s bum. Even so, it took massive time and effort to get everything absolutely dead flat and straight. An undertaking like this would be near impossible without the rotisserie. 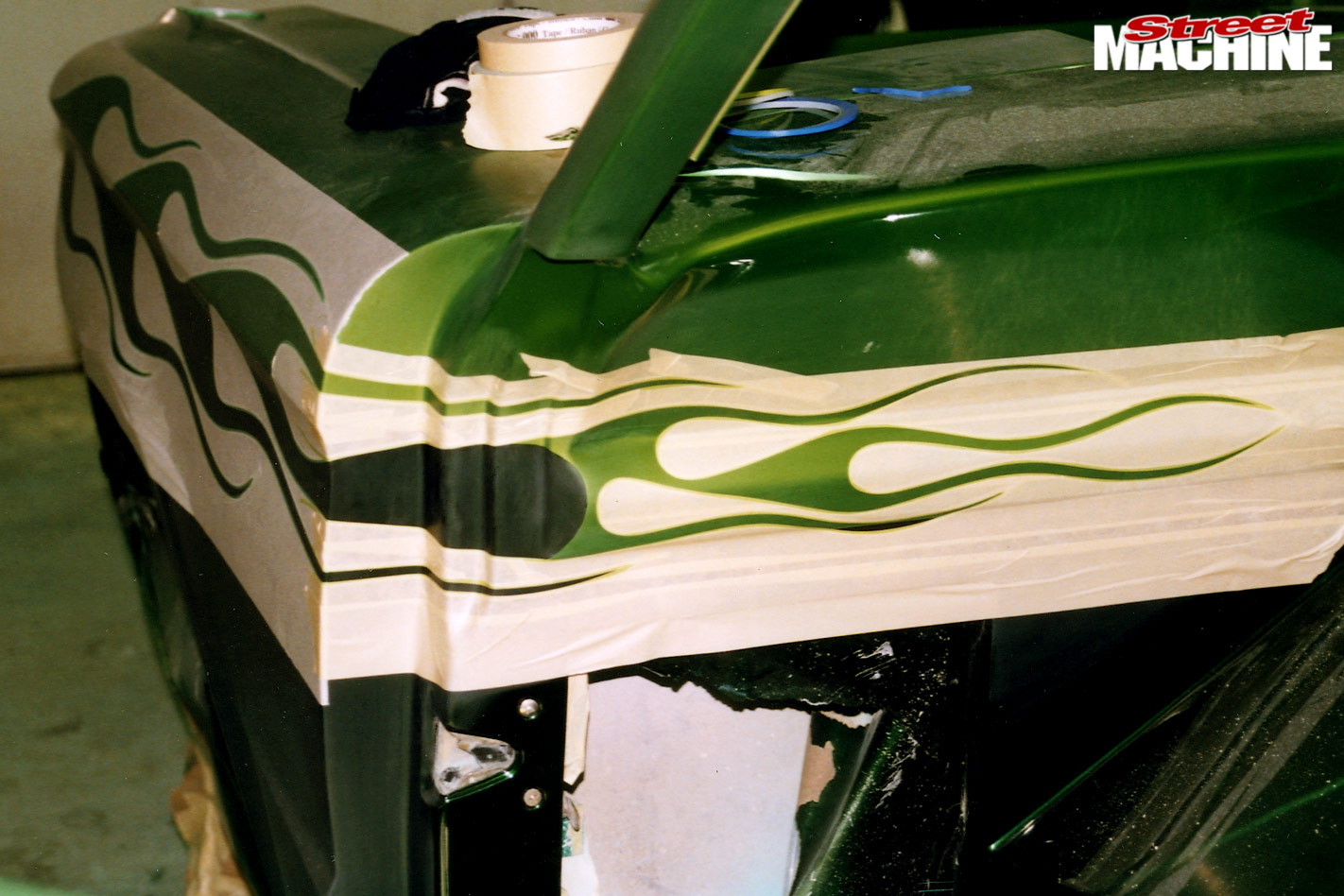 6. The XP exhibits a high degree of attention to detail. Note how the flames run not only into the door jamb, but across the dash as well. It was critical to get the flames’ various shades to flow seamlessly together.