Pro-Tourer rather than Pro-Street, this sweet XP hardtop was built for cruisin'

After knocking everyone for six with their pure-show, all-metal pro-steerer, the Hillier brothers built themselves a driver that's as sweet as pie

SOMETHING inside the XP doesn’t smell right. It’s plain and simply wrong, and I’m not pointing the finger but there’s only one other person in the car. The guy over there behind the pearl-grip and chrome steering wheel is Troy Hillier, and over the past few days he’s been on an unprescribed diet of vitamin VB and large numbers of meat pies. 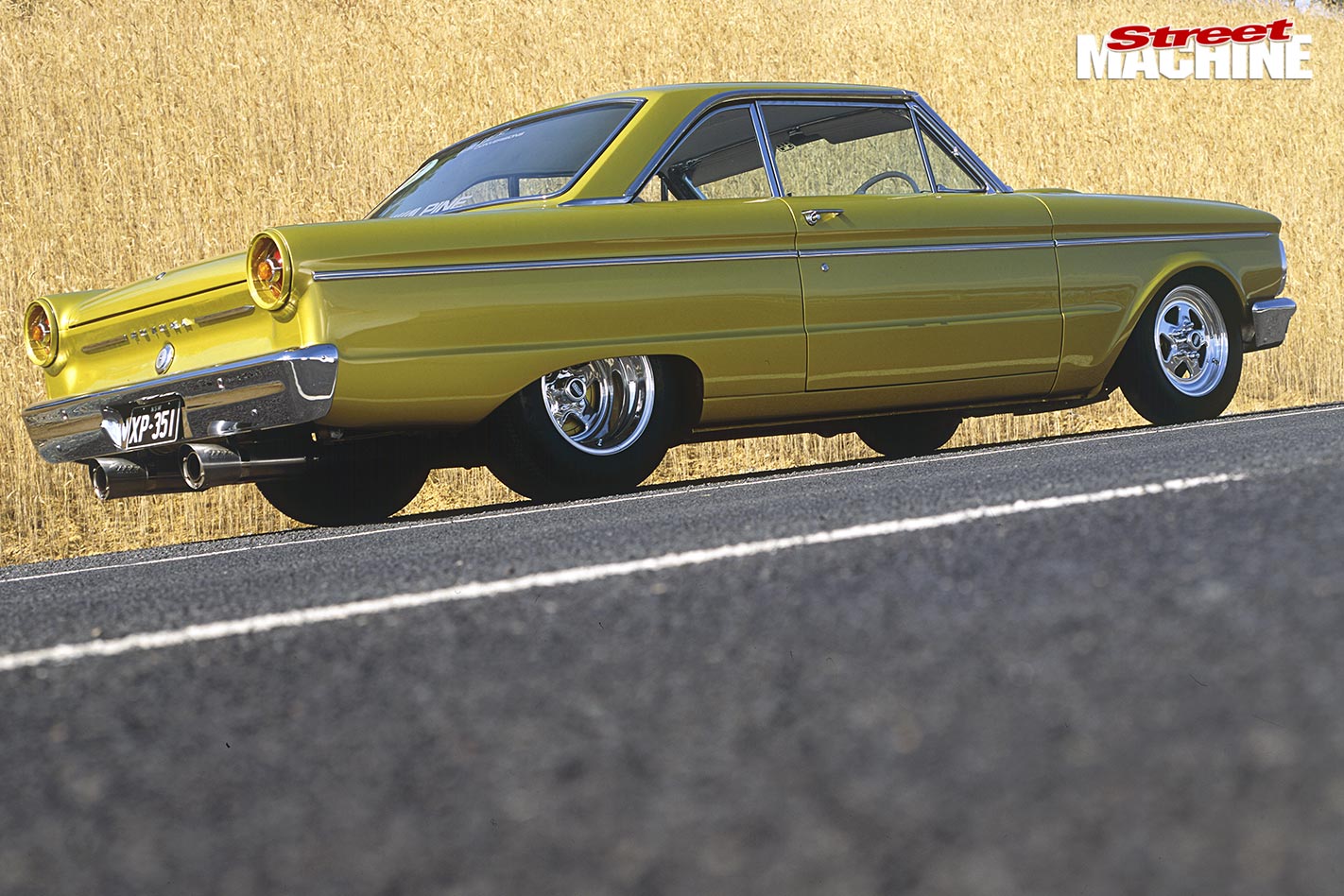 Troy and his brother Clayton have a reputation for surprises, like their AU coupe that rolled into Summernats a couple of years ago and a crisp-sounding blown gold XP hardtop. The unbefitting aroma is also one of his creations. But this scent isn’t personal. My arm is resting on the window sill of a 35-year-old XP that smells like a new car, drives like a new car – and sounds fangry.

The new-car bouquet is accompanied by a slight smell of petrol wafting from under the bonnet where a Holley 750 carby is dumping a tad too much fuel into the Clayton-built 420-cube stroked Windsor V8.

“This is the first time I’ve driven it,” Troy says, beaming – obviously excited and relieved that after three weeks of near-sleepless nights getting the hardtop ready for Summernats, it works a treat.

The brothers are undeniably Ford-loyal, and have teamed up to build other show-stealers for Summernats and the Melbourne Motor Show. Yep, Ford’s stunning AUII 300+ (SM April 2001) initially emerged from their Tenterfield workshop. All their stunners bear the Blue Oval badge, and they’re all goers. No trailer queens from these guys. 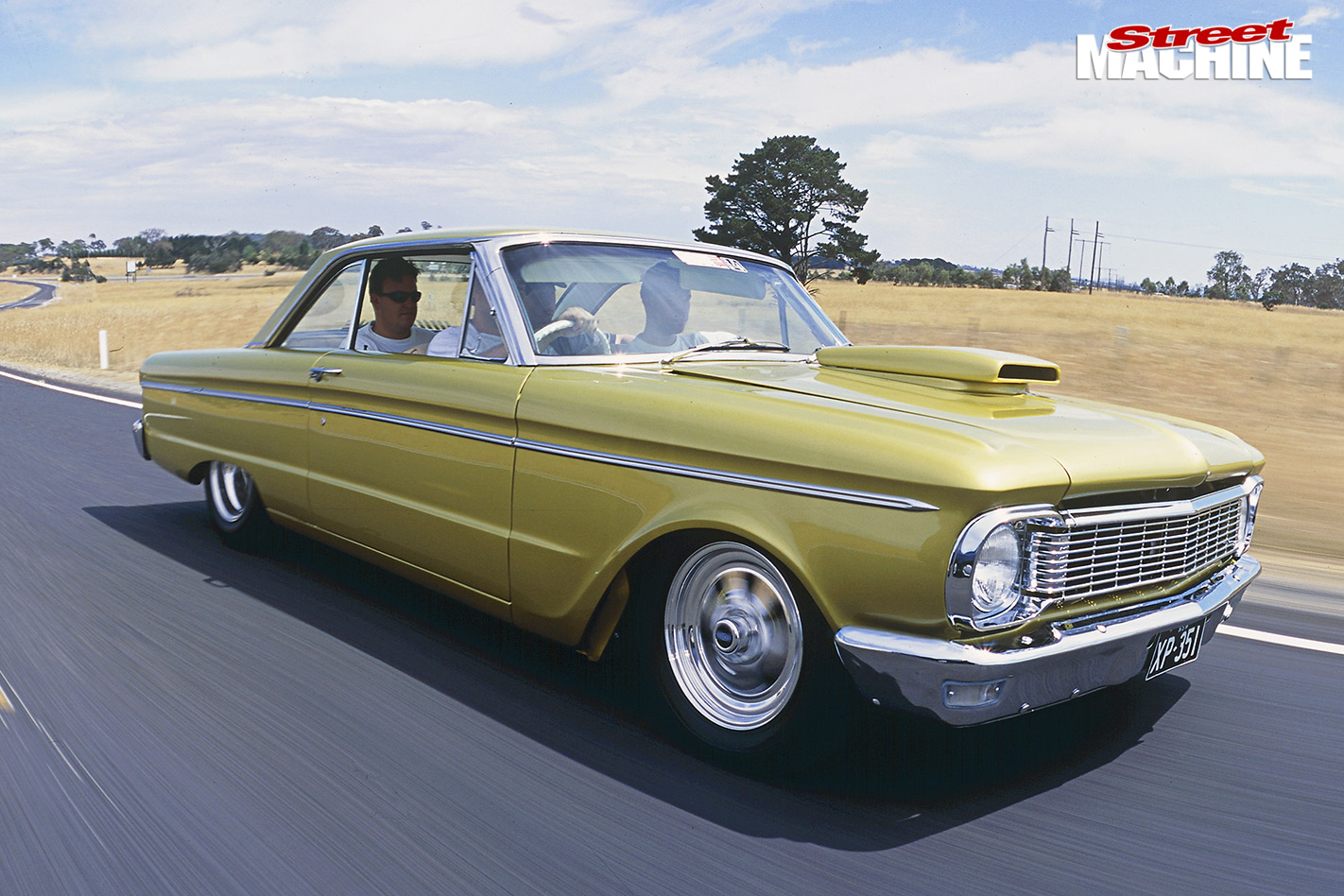 Pro-Tourer rather than Pro-Street, this sweet hardtop was built for cruisin’. When it comes to attention-getting streeters, the Hillier clan certainly has a fetish of the Ford variety

Yet here we are driving a 35-year-old Falcon when Troy could pick whatever late-model car he wants – as long as it has a Ford badge, of course! Troy tells it straight: “Today’s cars are obsolete in 10 years. With the XP I can find bits everywhere. Back then, cars were built to last.” You see it inside where steel mouldings hold the headlining and surround the windscreen. “These cars were bolted together, not glued together,” reckons Todd.

“I bought this XP in 1991. I wasn’t going to touch it, just leave it white.” But … “There were a lot of comments regarding the gold coupe, how it was just a show pony and not a genuine streeter. To answer the critics we decided to build a ‘driver’ that was still capable of pulling a crowd at shows.”

So it was that the previously stock and slightly tired XP was given a good going-over just three weeks out from Summernats. 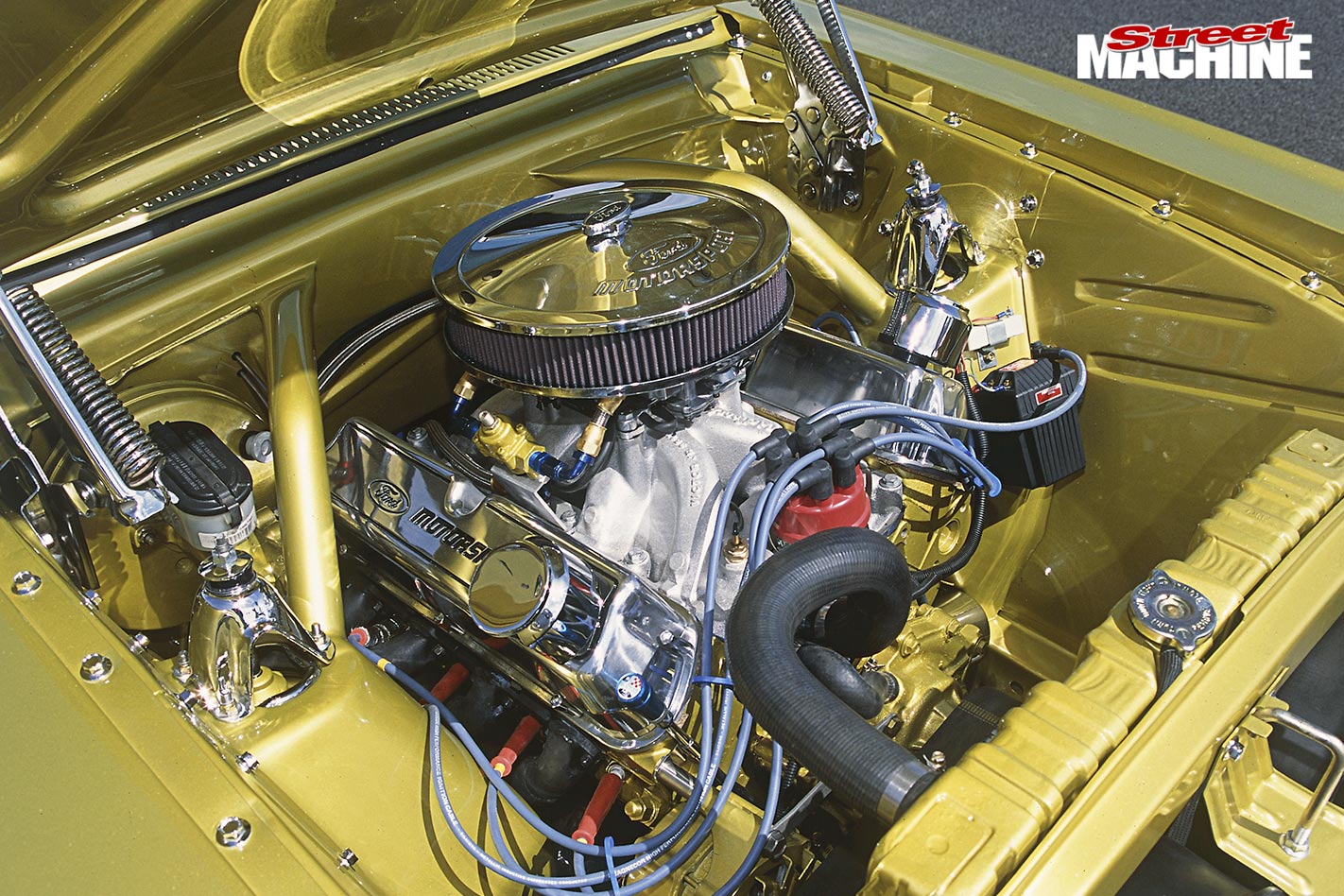 The bored and stroked Windsor makes a full engine bay. Check out the shock tower clearance. Tight as!

At the end of that three-week period, the XP’s sheetmetal had copped the full-massage treatment, and a pair of obese Goodyear-swallowing mini tubs; and the colour had changed to Gallio.

Modern paint on an old body; it works very well. “I didn’t touch any of the exterior metal, it’s all original,” Troy explains. “The XP is just a big engine, good gearbox and a strong diff.” He forgot to mention that new-smelling interior. Inside, Troy tells us he wanted to keep it old with a modern colour – “I was even going to keep the front bench seat in it,” he recalls.

But he opted for a set of buckets covered in the same creamy vinyl as the rest of the interior. Another neat touch in the cabin is the colour-matched piping that’s integrated into the seam work. It really sets off the whole interior. 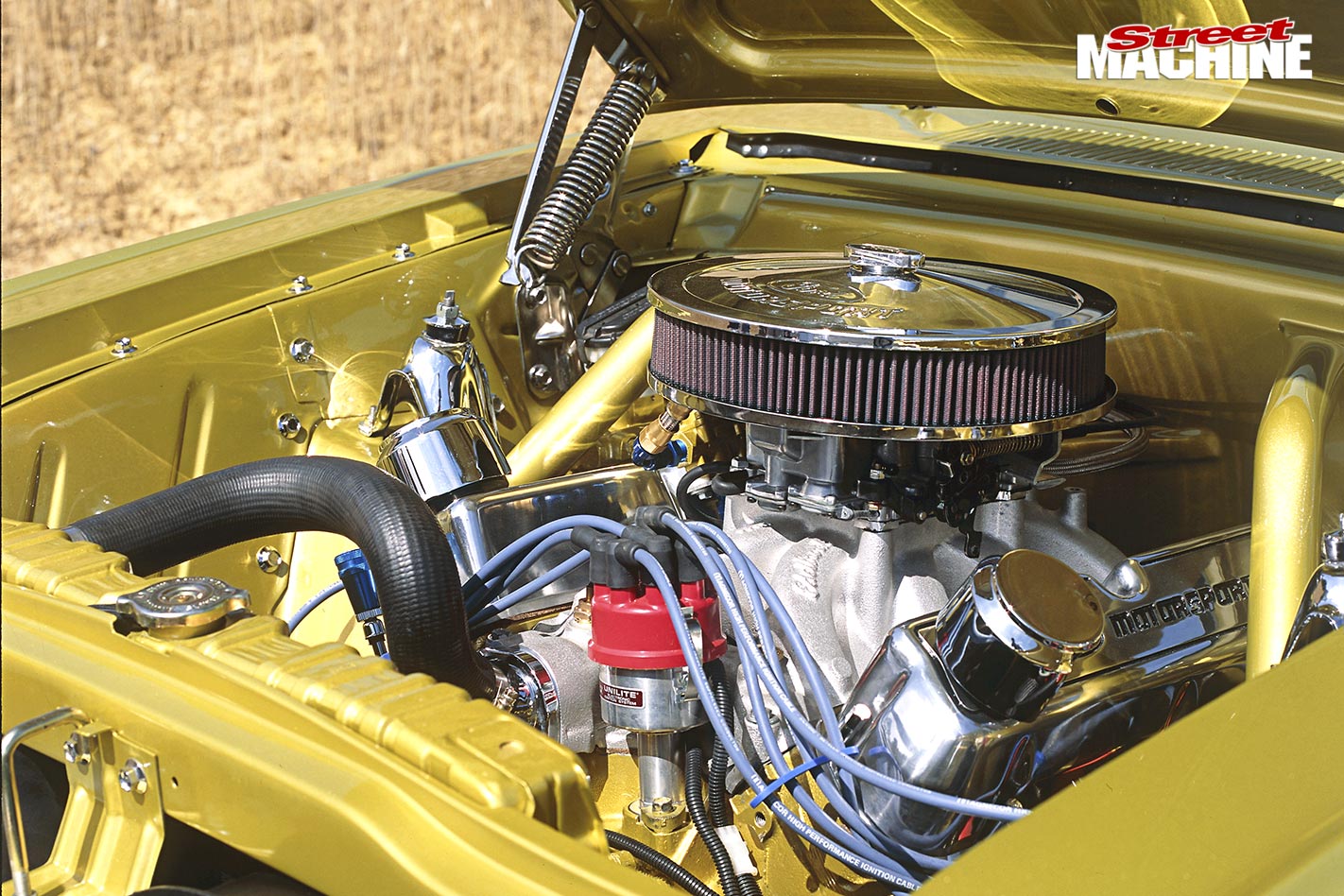 Underneath is a completely different story. Once up on the rotisserie, Troy proceeded to lop out the old crossmember and tranny tunnel, redirecting the twin exhausts down the centre of the floor. Look under there and you’ll realise the car is as clean down there as it is on top. Working in conjunction with the new underpinnings is a pair of beefy engine-bay braces. They were added to stop everything from getting twisted to hell when Troy gets on the gas.

Not that he was getting too adventurous, as Clayton, who bolted the thing together, gave firm orders to take it easy until the powerplant is run-in.

Fabrication work is easy for Troy. He does this stuff every day, and for three weeks before Summernats 2001 he worked almost day and night on the XP. “My girlfriend knows that leading up to Summernats – basically the month of December – she won’t see me. But she knows what I’m doing.” Saves on presents, too. 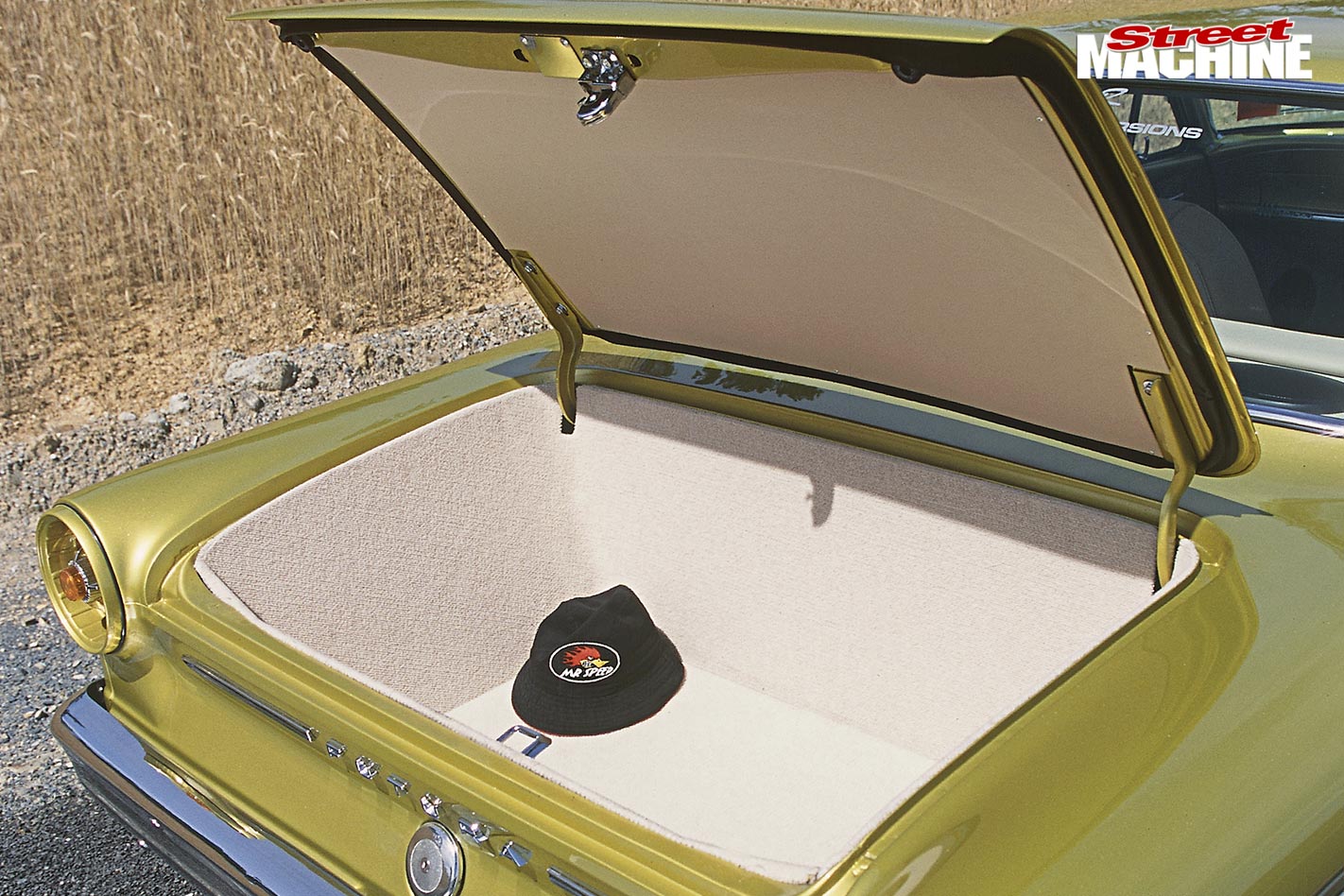 While Troy was busying himself with the metalwork, Clayton was building that big-inch Windsor. He started with a tall Windsor block and a 4.1-inch stroker crank. With a 4.0-inch bore, that makes a small-block Ford of around 420ci, and capable of making enough power to spin the Goodyear 275/60-shod 15x10s in top gear. The exact power figure is exactly a lot.

Finding an extra 69 cubes inside a block designed to swing a mere 351 can be done quite easily, but Clayton opted to push it. He relieved the block just below the bores and teamed the long-arm crank with a set of 61/8-inch rods.

Clayton reports that compression is a little high at 10.4:1. Extra-thick copper head gaskets will drop that to a more street-friendly 9.8:1 and relieve his concerns.

Everything is a tight squeeze in the XP’s narrow engine bay. Clayton had to think smart when bending up the extractors, otherwise they just weren’t going to fit. As it is, you can barely squeeze a coat of paint between the pipes and the towers. 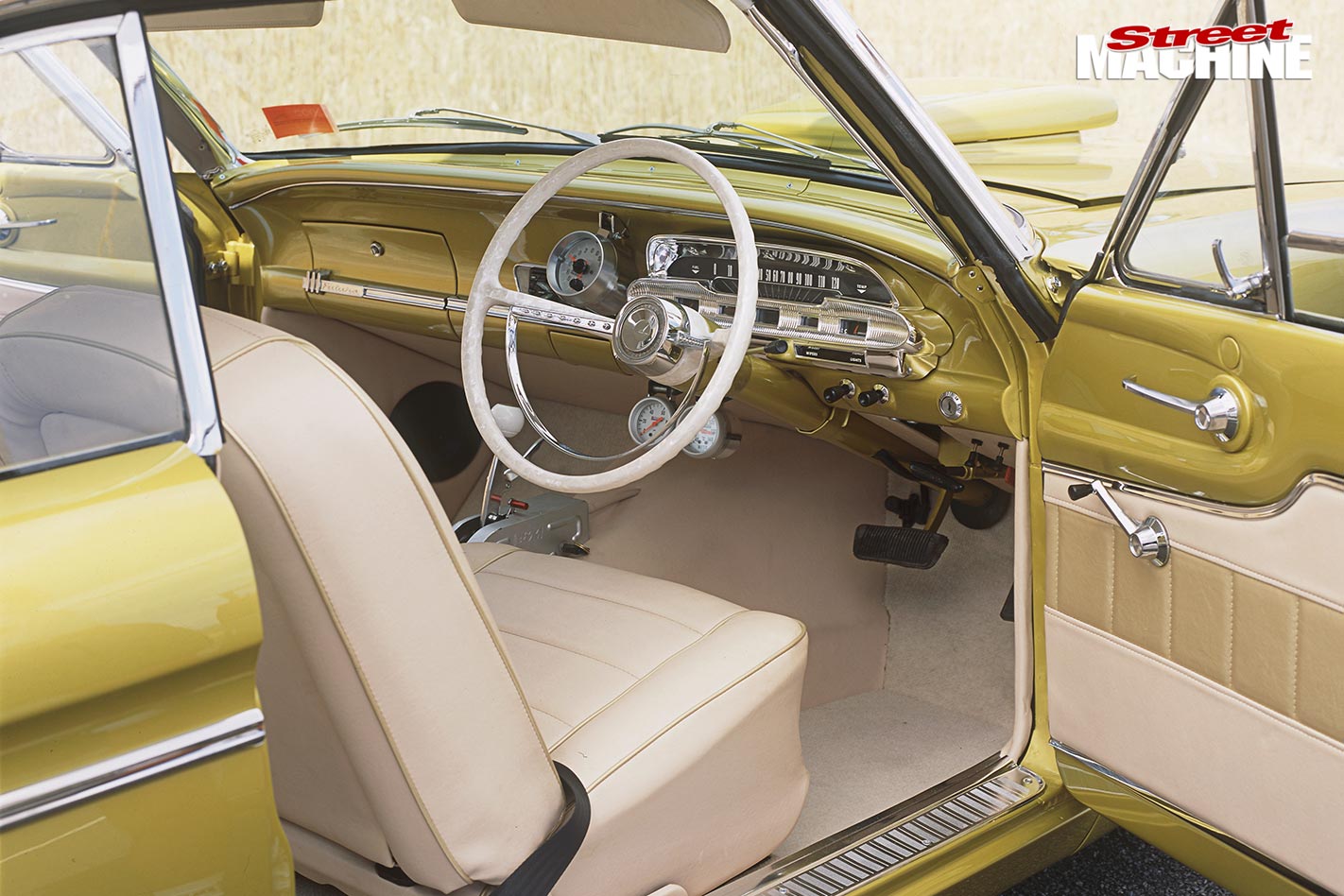 So there you have it, the XP hardtop, Hillier-style take two: Pro Tourer rather than hardcore Pro Street. It still has the SuperTrapps out the rear, bigs ’n’ littlies under the guards, nasty hunkered-down stance, fire-breathing donk under the bonnet, but it’s all dressed in a package that allows the boys to bolt on those famous XP 351 plates without sending the rego boys into a spin. This time it’s definitely one for the road.