Sweet low-budget, cheap-to-run build you can swing a P plate on 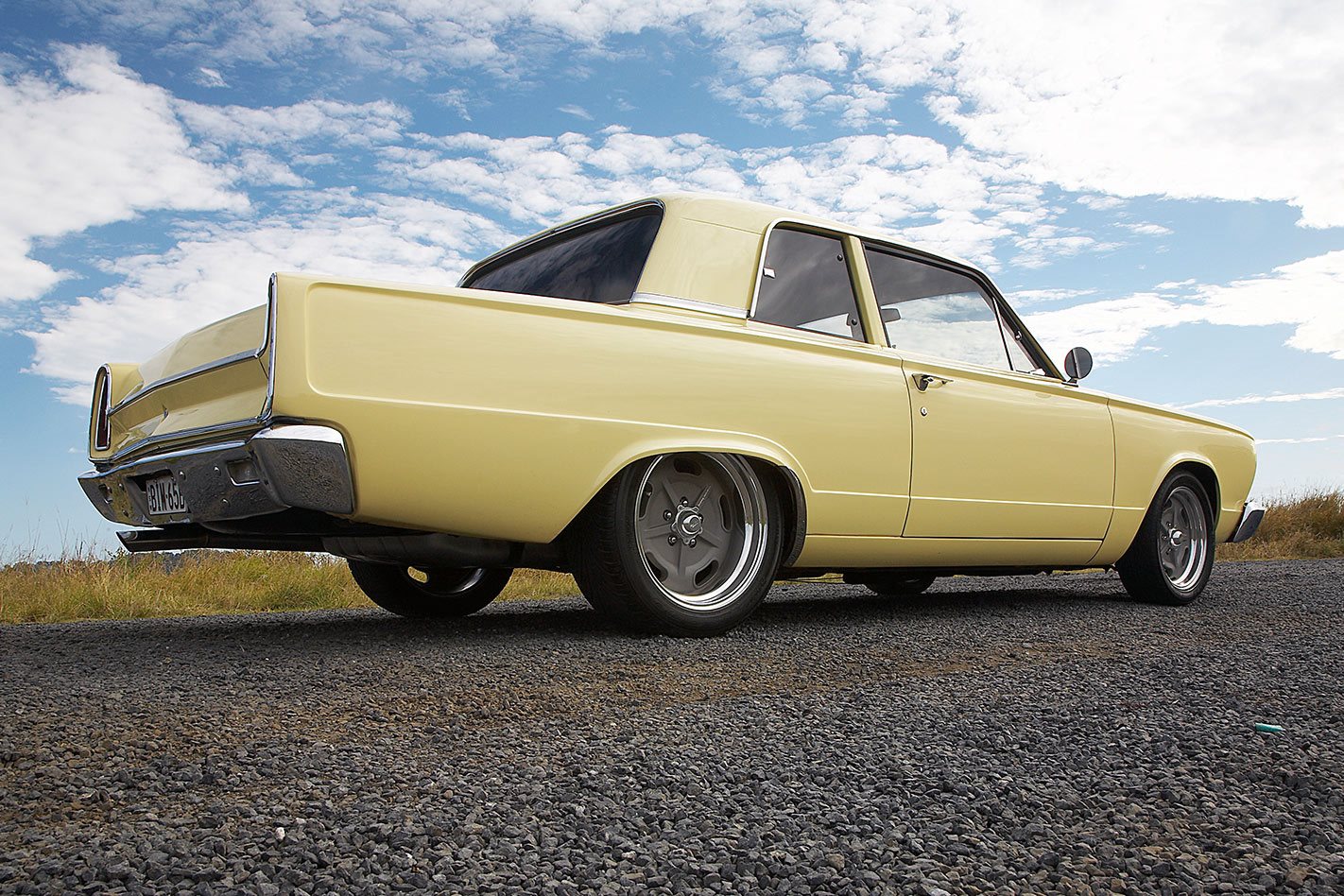 It helps to have a good teacher, and Tom’s dad Damien is well known to Street Machine readers with his cool ’71 Dodge pick-up (SM, Sep 2006) and ’49 Dodge Coronet Coupe (SM, Nov 2003). Damien’s a Mopar madman who’s not afraid to break out the grinder and welder to give a car the right look. So when Tom’s cousin decided to sell this VC sedan a couple years ago Tom snapped it up, with a little prodding from dear old dad.

“I liked the shape and the style of it, and how unique it was,” Tom says. “My cousin had it. It was his old daily driver, he drove it around until it ran out of rego. Dad said I should buy it and fit a motor his mate had sitting in his shed, just for something different.”

That motor is definitely different. It’s a little Mopar 3.9-litre V6 from a Dodge Dakota pick-up. Not a common engine in Australia because the Dakota was never released here, but a few were imported.

“Once we got the motor and the car, Dad just said, ‘Maybe we should turn it into a two door’, just as a joke.” That sparked an idea.

Rust wasn’t too bad, but it was still afflicted in all the usual places: lower front guards, sills, rear guards and near the rear window. You kind of expect it in a car over 40 years old. 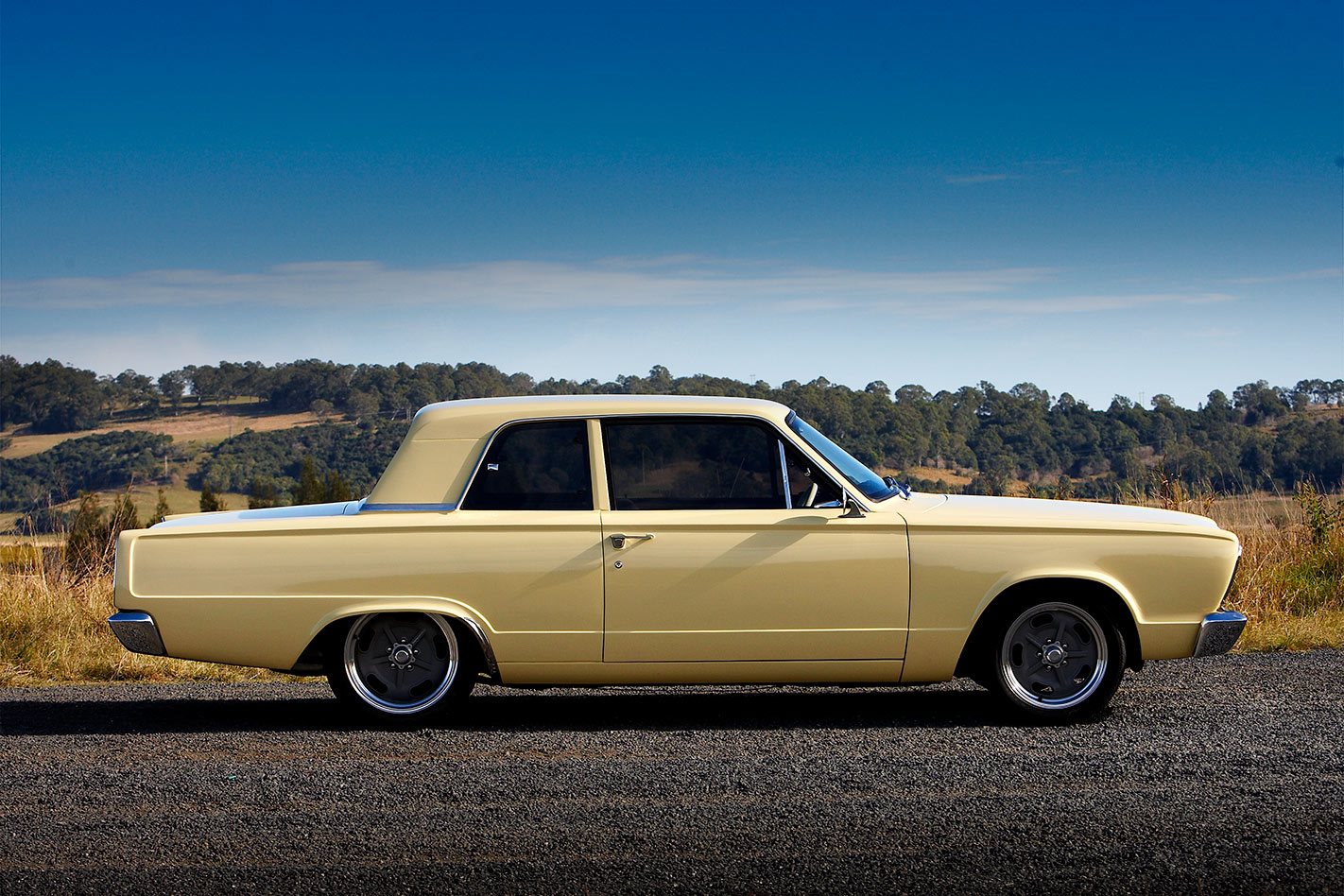 Tom and his dad then hooked into the bodywork just before they left for Chryslers on the Murray 2008; the plan was to have the car ready for 2009.

The rust itself was pretty simple for Tom and Damien, but converting the old girl into a two-door was a little harder. To do the job right the guys had to stretch the front doors and move the B-pillar back by the same amount. Eight inches – or 200mm – was added to the length of the front doors to give them the right look and the boys certainly got that spot on; the car looks factory.

Moving the B-pillar turned out to be relatively easy Tom reckons: “We just cut it out and drilled out the spot welds, and then latched it to the [extended] door and closed the door. Then we looked at the pillar until it was all nice and plumb with all the gaps, tacked it in and then stood back and had a look from a distance. We thought, ‘Yeah that looks good’.”

From there it was just a matter of filling up the space left by the rear doors and Tom admits that they performed the mortal sin of cutting up new-old-stock door skins to do the job. Inside they used the inner portion of the original doors to make up the windowsills in the back and fitted the custom rear windows using hinges from a hatchback and the popper/lock from an Aussie Charger. 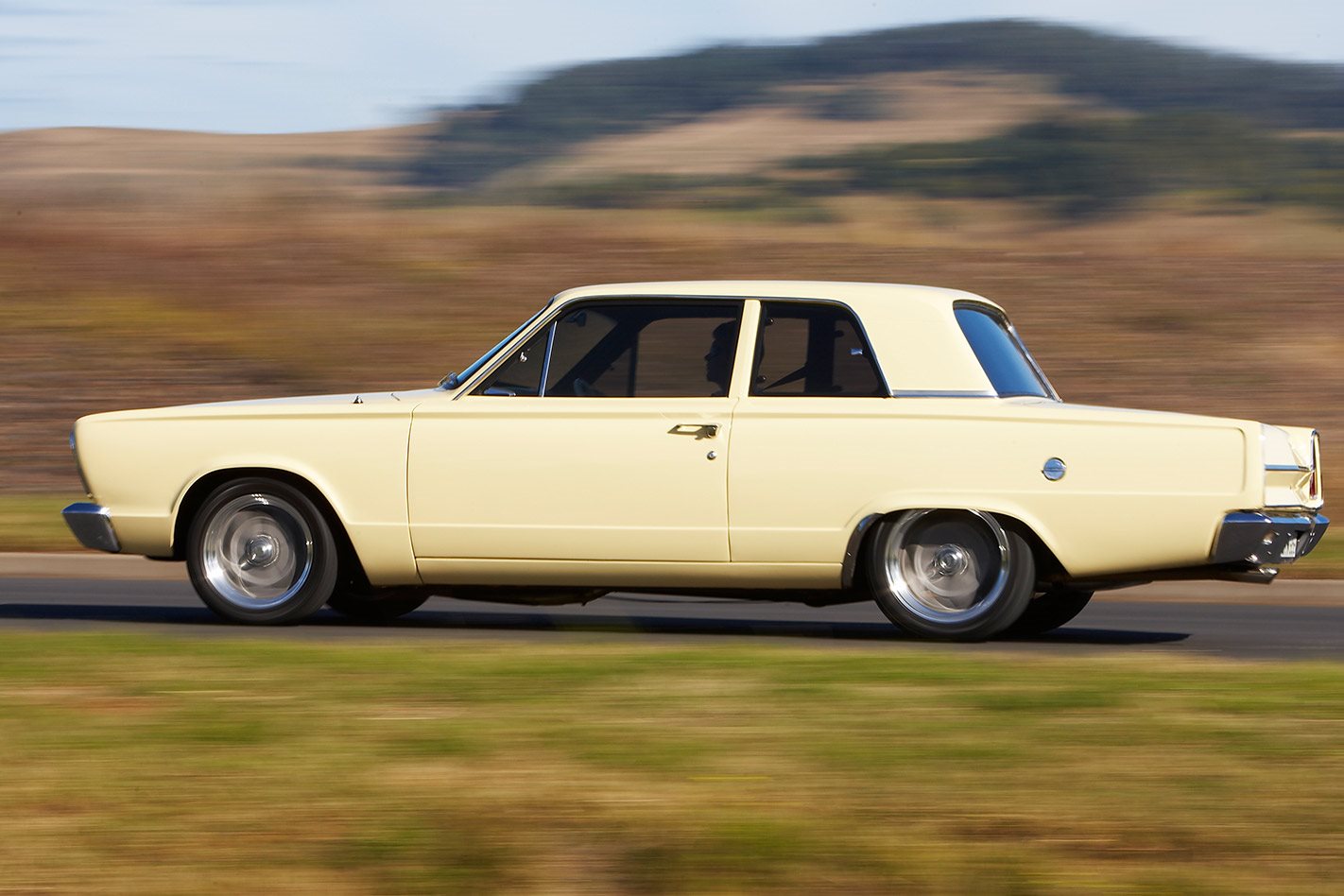 All the glass was cut brand new, made easy because the VC is the last model Valiant with flat glass (except the windscreen).

The engine conversion must have seemed easy after all that. When they got it, the little 3.9 V6 came attached to a Torqueflite auto but using a slushbox isn’t how Tom rolls. He’s got two legs and he likes to use them. Fortunately the VC already came with the requisite manual pedal set; the boys raided a four-speed Drifter van for its V8 bellhousing and the Borg Warner single-rail ’box from a Charger. They dummied it up and bolted the gearbox into place using the trans mount and then made up engine mounts to suit the V6.

You’ll note the engine looks like it sits a long way back, and a few people noticed this at Chryslers On The Murray 2009 where the car made its debut.

“A couple of people asked how much I recessed the firewall to make the V8 look so small,” Tom recalls with a laugh. 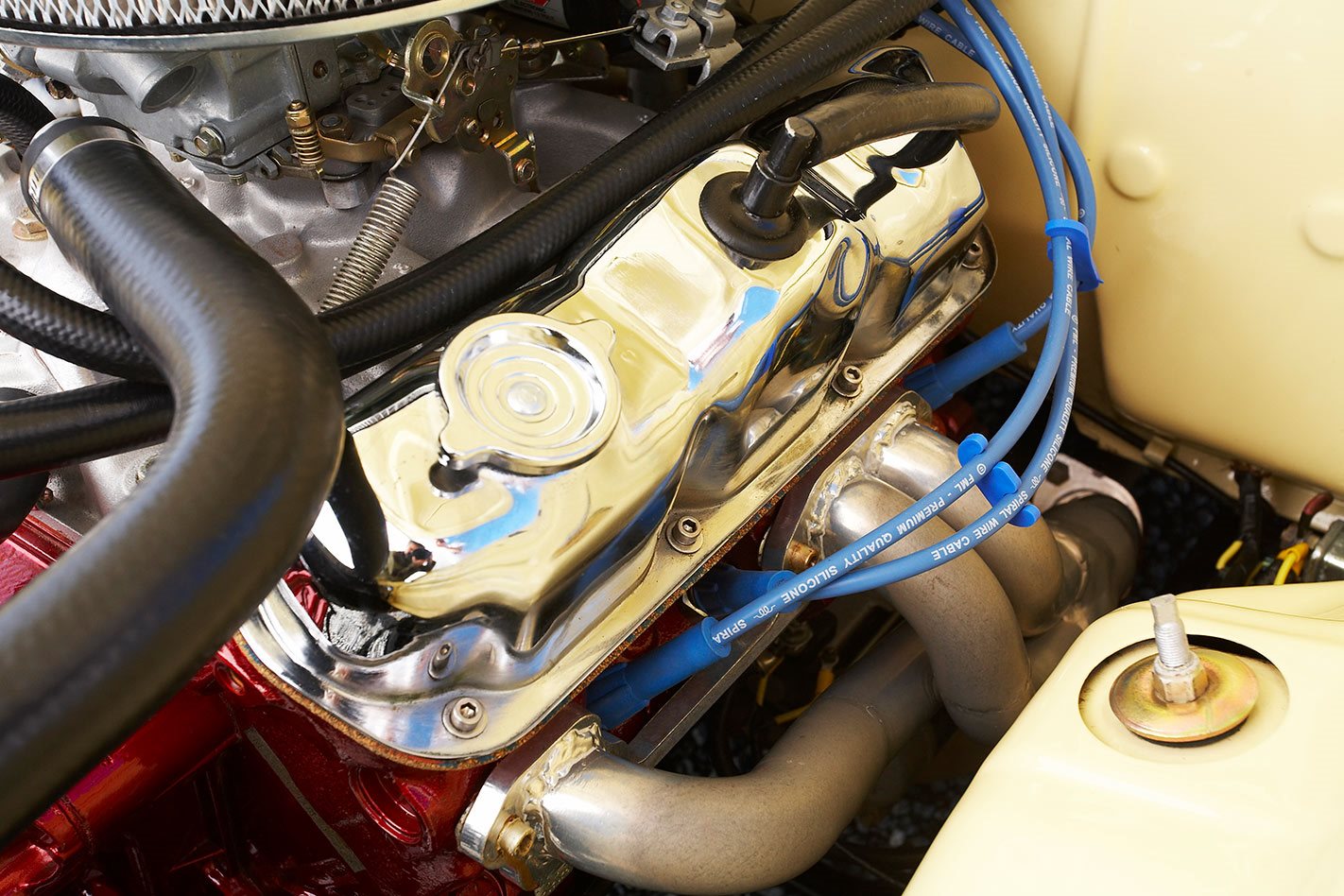 The rear of the motor is located in the same spot as it would be if you put a V8 in there, but without the front two cylinders, almost the whole engine sits behind the axle line. As a result the VC handles a lot better than it ever did with a long and heavy slant six up front, and the V6 is about 32kg lighter as well.

Originally the 3.9 came with throttle body injection so they removed the throttle body and made up an adaptor for a 350cfm two-barrel Holley. With the engine being of an unknown age and condition, Tom had Everingham Engine Reconditioning machine the block for new slugs before Ian Anelzark re-assembled it. Even in the US, performance parts for the 3.9 aren’t exactly common so Tom bought a 318-rebuild kit from Summit Racing.

As it sits, Tom’s pretty happy with the result, he’s got himself a unique P-plate legal ride for under $20,000 and “it’s cheap as chips to run”, he reckons. 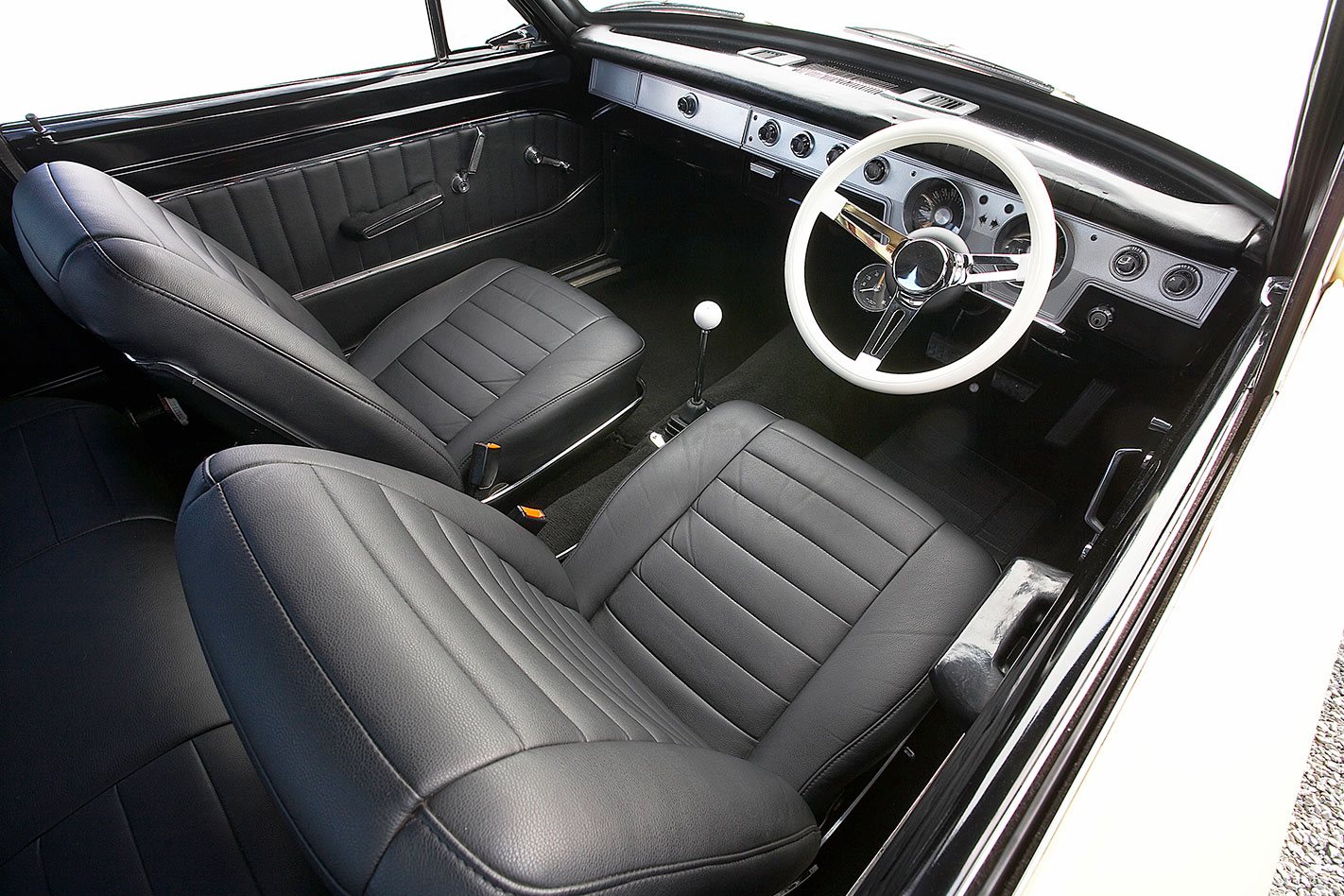 Fresh from the paint shop and new rego Tom embarked on the 1300km trip to Wodonga for Chryslers on the Murray. He spent between $130 to $150 on fuel for the trip down, which is pretty amazing – a lot of late model EFI cars couldn’t do the same trip for less.

Not only did he make it to the show with no problems, Tom also won best-modified VC and the two-door layout raised a few eyebrows.

“A lot of people just walked past and they’d look at it, and then stop and look at it again,” Tom reckons. The engine had a few people scratching their heads, too. A few people even asked if Tom cut up a V8 to make the V6.

Since finishing it Tom hasn’t stopped driving. In the short time the car’s been on the road he’s already done over 10,000 kays and won another gong in Rockhampton.

“I won Top Street Machine and I had the smallest motor,” Tom laughs. “Everybody else had big-blocks, blowers on Hemi sixes, and hot small-blocks and I’ve got this little V6.”

That’s pretty cool. Goes to show that if you’re a young fella (or gal) looking for a cool and legal ride that won’t cost a bomb to run, there are plenty of options. Of course, having a street machiner dad really helps! 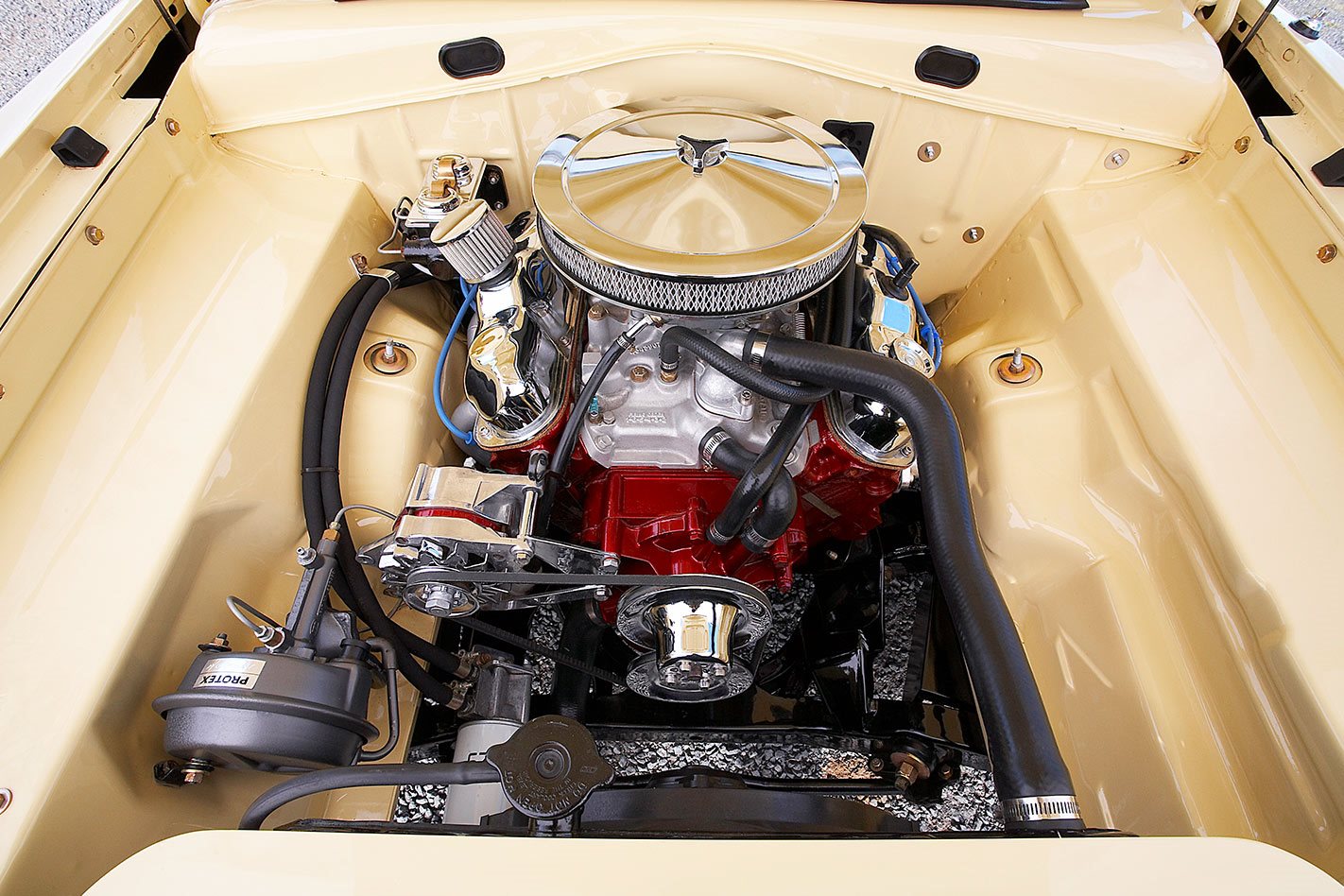 The diminutive 3.9-litre Dodge V6 is a good fit in the Valiant engine bay. It’s a more economical choice, too

Released in 1986 the 3.9-litre is a 239ci V6 used in the Dodge Dakota pick-ups from ’86 to ’92 and then in Dodge Ram pick-ups and vans from ’88 to ’92. Essentially it’s a six-cylinder version the Chrysler 318ci V8 sharing the same bore (3.91in), stroke (3.31in) and deck height (9.6in). The difference, besides the lack of two cylinders, is the split journal crankshaft that alternates the firing intervals between 128 and 112 degrees. As a consequence the big-end journals on the rods are noticeably narrower than on the 318 V8 as well.

The 1986-87 version of the engine used a carby and hydraulic lifters and produced 125hp (93kW) and 195lb/ft (264Nm) in standard form. In 1987 the lifters were upgraded to hydraulic rollers and then to TBI (throttle body injection) in ’88 which it retained until the engine was replaced by the Magnum 3.9-litre in 1992.

The 180hp Magnum was used as the base model engine in the Dodge Ram line-up until the end of 2003.