DID you spot it yet? It often takes people a few seconds before they realise what they’re missing with this tidy XR GT — a pair of doors! Don’t let the gold paint and the GT jewellery trick you; this isn’t just another XR GT and you’d be a pretty silly bloke if you didn’t pay it some serious attention. 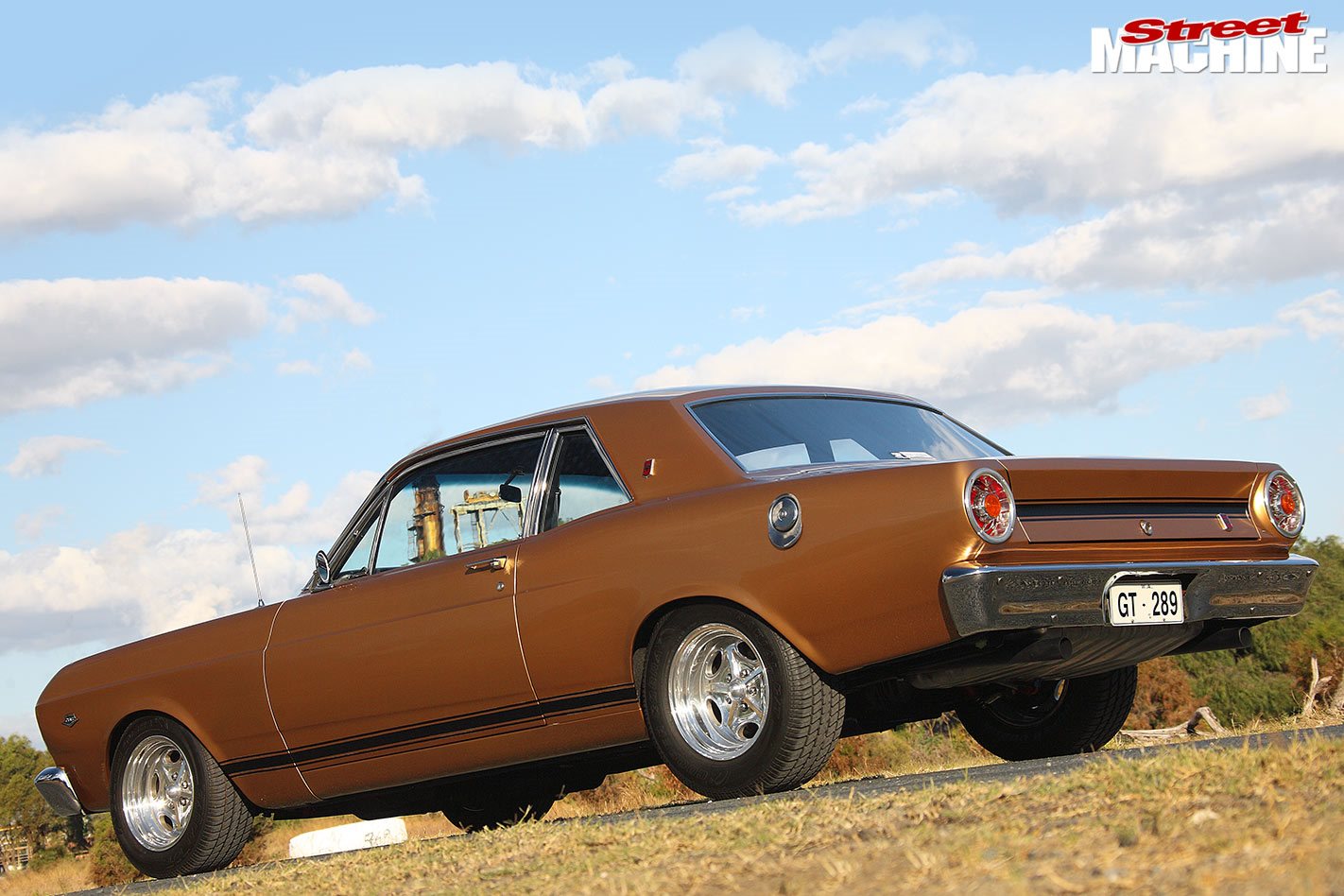 Perfect stance and the familiar lines of the XR make for a classic Aussie street machine. All it’s missing is a couple of extra fire escapes

It’s a beautifully put-together car with some trick details that don’t become apparent until the bonnet goes up. Owned by West Aussie Spike Jones, the car was built as a turn-key project by John Taverna Chassis in Melbourne. In fact, John was building the car for himself but through the wonders of television, things were about to change.

“I was watching Cruizin’ and Murray Reynolds was interviewing John Taverna. I saw the coupe up on his hoist and thought: ‘That’s what I want,’” Spike says. The next day he called John. “He had two Falcon coupes — one was average and the other he was doing for himself. It was in primer and already converted to RHD. I was going back to sea [he drops oil rigs in position] so I said: ‘I’ll give you a call in six weeks.’” 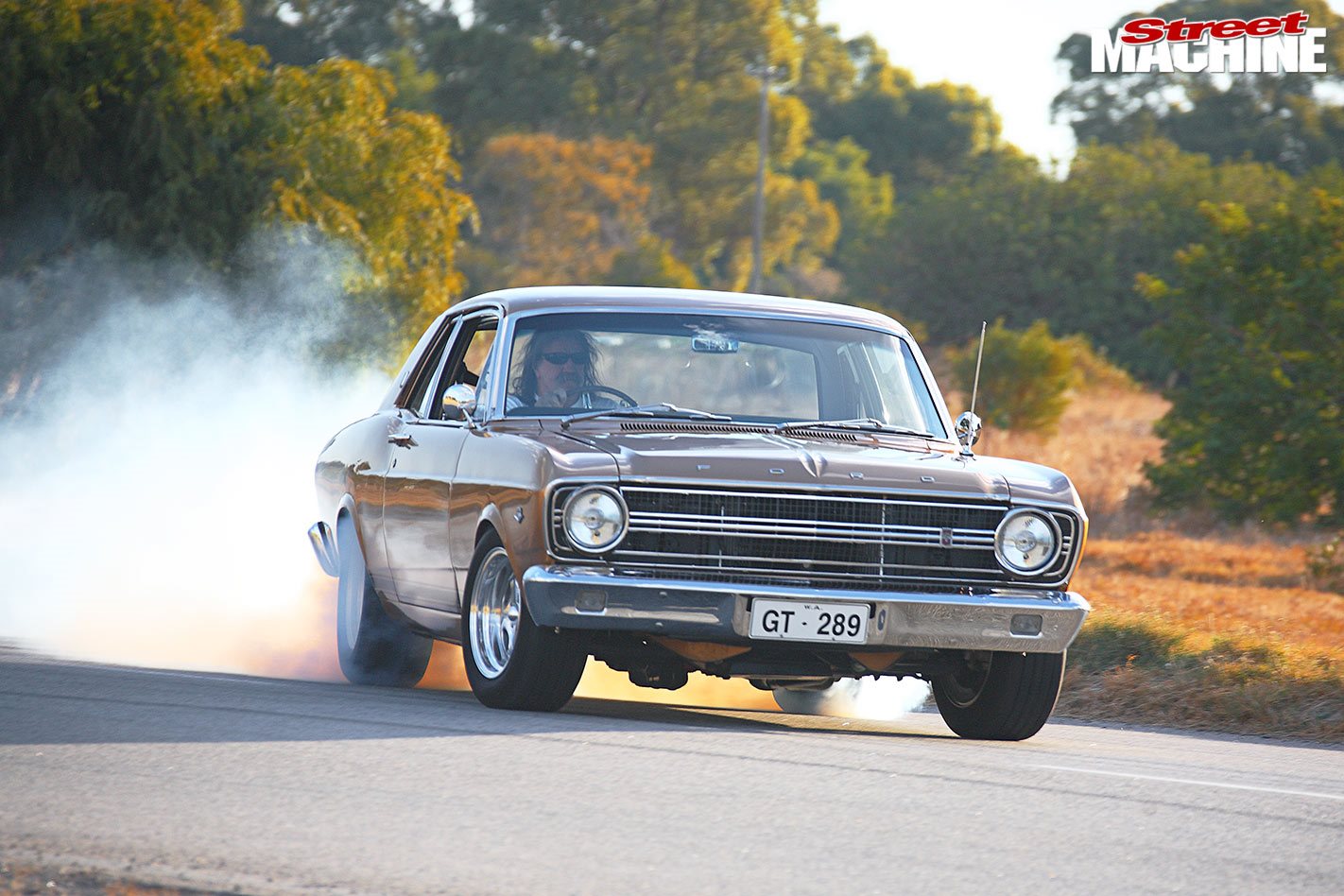 The six weeks passed, Spike called but the project coupe had already been sold. That wasn’t really a problem as the car John was building — and the better of the two — was now for sale.

“I booked a flight and John picked me up from the airport. We went and had a look at the car in the paint shop and he told me he was going to do it as a Cobra: white with blue stripes and a blue interior. I said: ‘Nope, that’s not what I had in mind.’”

Spike had a pretty good idea of what he wanted, so over the course of the next few days they worked out a plan of attack. “John drove me all around Melbourne and introduced me to all the people that were going to work on the car. I said to him: ‘Heaven’s going to be like this — everywhere I go is Blue Oval.’”

After spending a bit of time together, John had a pretty good handle on what Spike wanted: “The one that Ford should have built. You want it to look stock, but go like hell,” John said. Spike agreed that this just about summed it up. 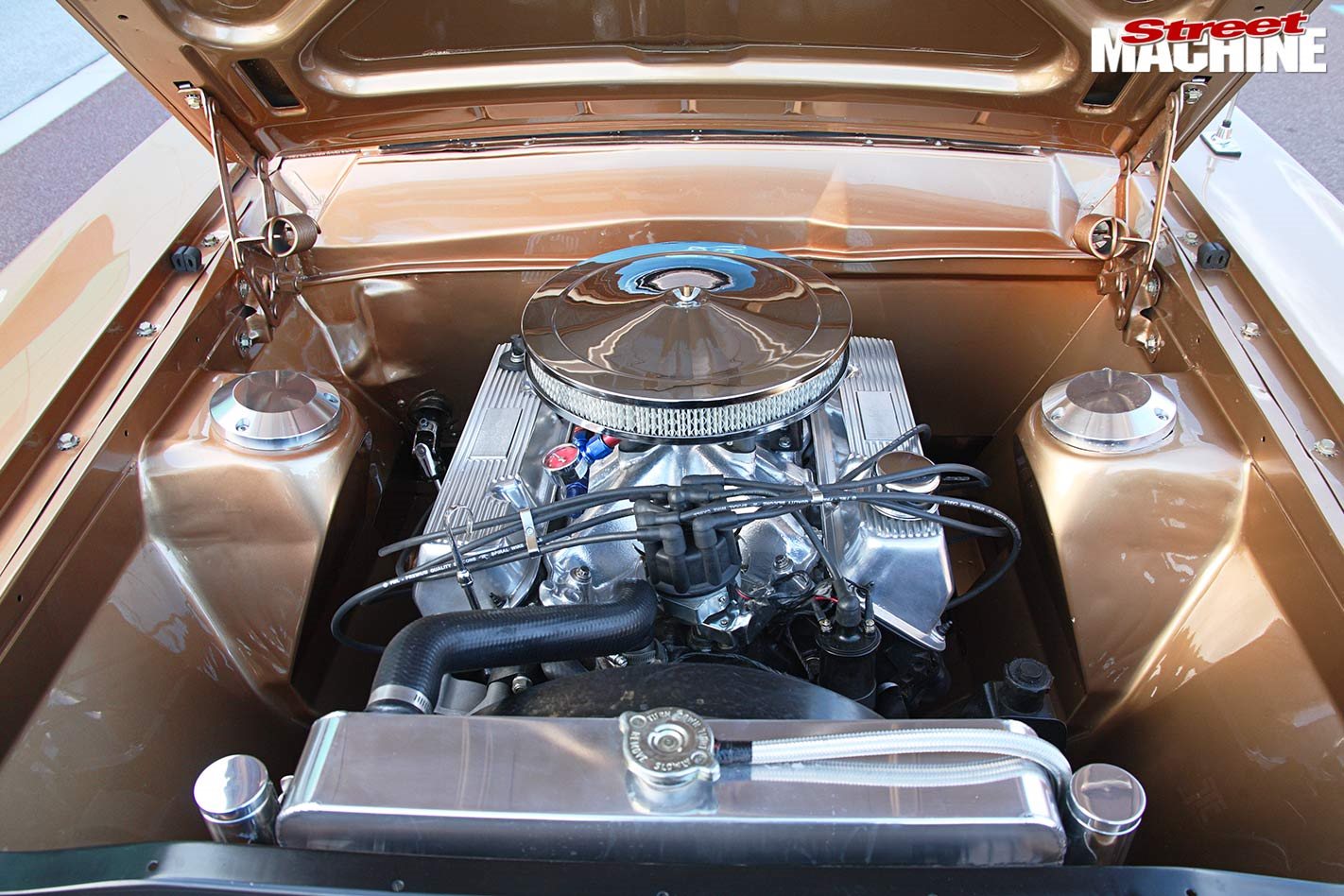 It might look fairly stock on the outside, but pop the bonnet and you’re greeted with 396 cubes of rampaging Clevo. Reworked shock towers hint at the RRS suspension. “The engineer wanted strut braces but John pointed out that there were box sections behind the shock towers in the inner guards, so that’s how we got around not having them.”

For all you early Falcon restorers out there, the car is a 1966 C-code Sports Coupe out of the Kansas City plant. John spotted it at the Pomona Swap-Meet and brought it back around five years ago, then spent 18 months or so getting it to the point where it was almost ready for paint.

But now that it was Spike’s car — although John does still like to refer to it as his — the plan changed and it came back from the paint shop for surgery.

“The firewall was removed and smoothed and the shock towers scalloped. They buried the wiper motor and put the booster up behind the dash, worked on the engine bay and then it went back to the painters. It was there for five and a half months. They were taking their time and doing a really nice job,” Spike says. 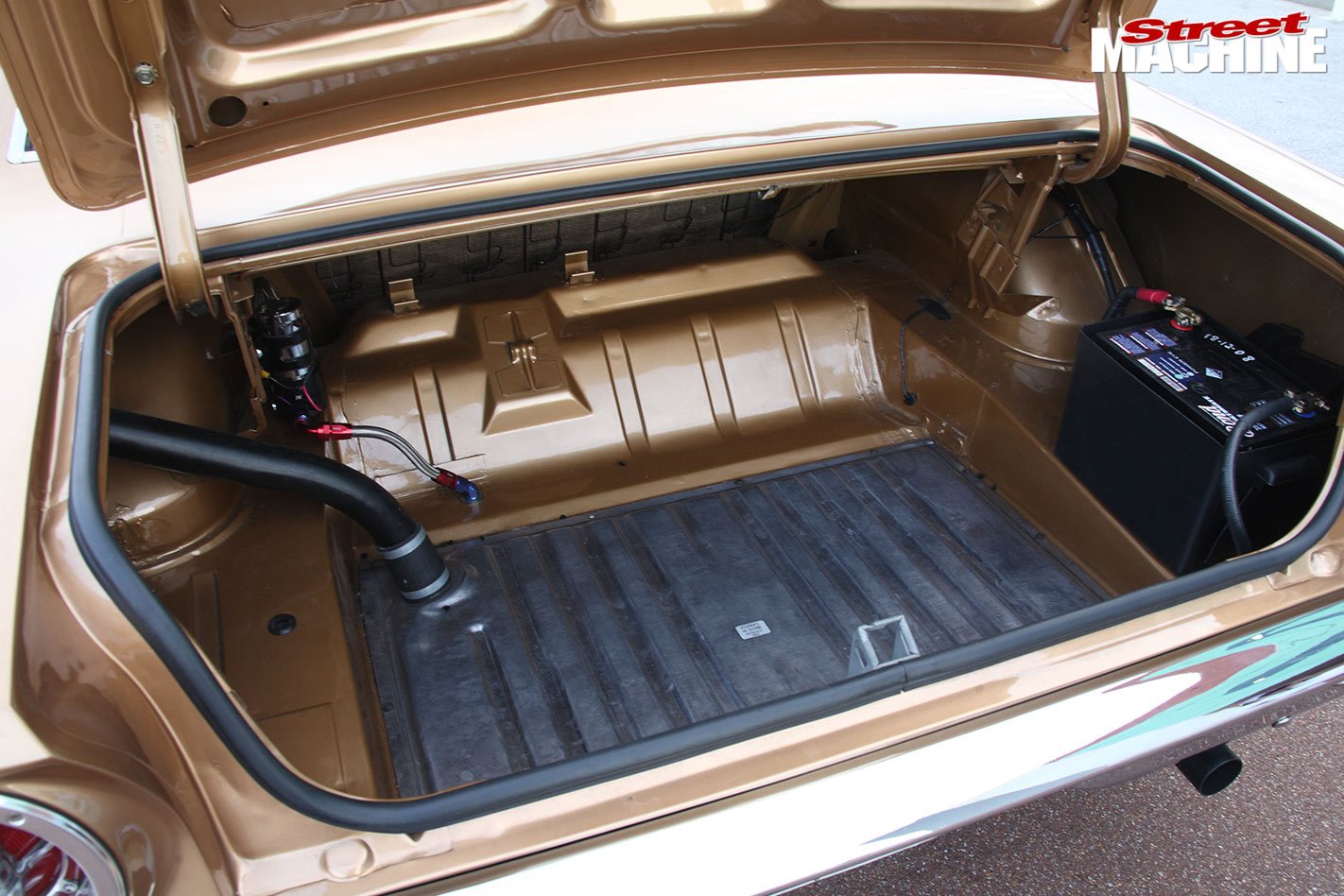 The scalloped inner guards give the game away that this Falcon is running an RRS front suspension set-up but John talked Spike out of the three-link rear.

“John said: ‘You don’t need that — I’ll build you rear suspension that’ll hook up just as well.’ It’s still a leaf spring but he worked his magic on it. It doesn’t squat like a normal Falcon; it just hooks up.”

When it came to engine choice, Spike had some rather exotic tastes. “I wanted a Cammer in it [laughs]. John said: ‘Nah, I’ll build you a motor with as much horsepower and torque.’ I said: ‘I want something tough,’ he said: ‘I’ll build you a Cleveland,’ I said: ‘That’s not tough,’ he said: ‘I’ll do you a Clevo with a hydraulic cam.’ I said: ‘You’re getting worse!’ I wanted a flat-tappet Windsor with Boss heads that’d screams its tits off.” John got his way. 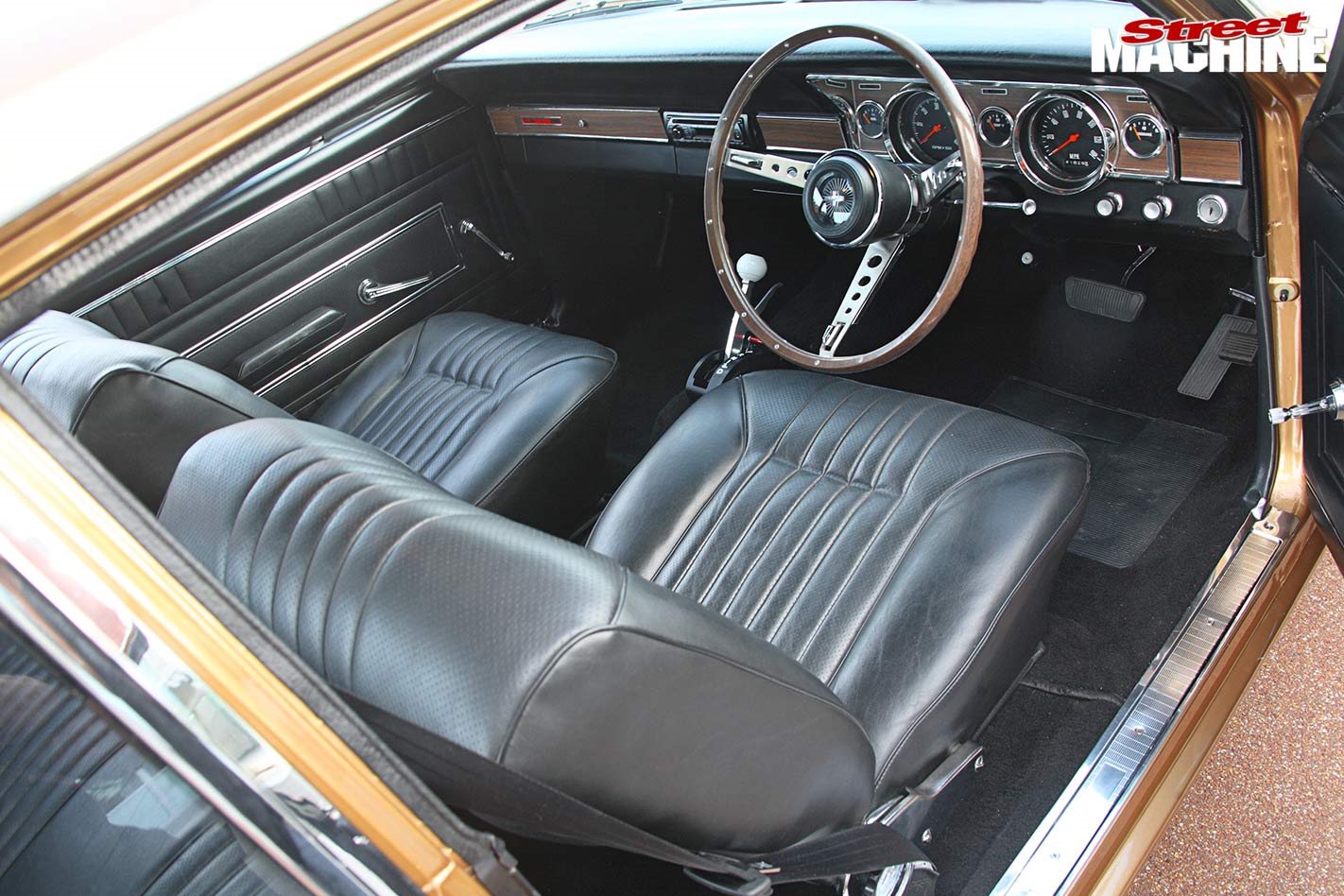 The GT restorers will pick the XT GT seats but the rest is spot-on for an XR GT — well, except for the two pedals and TCI shifter. “The XR was charcoal and also the XT vinyl was more supple. Originally, I wanted to do the interior gold with cream leather, but John got his way.”

It might not be a Cammer but 396 inches of stroked Clevo is tough, especially when it’s been built for durability and torque. You could throw a truckload of giggle gas at this motor and it’d laugh it off. It runs a Scat crank and H-beam rods, Probe 10.5:1 pistons, ported closed chamber 4V heads and a big 930 Pro Series Holley jamming the fuel into an Edelbrock Torker.

This thing makes 475 horses at the flywheel. It made 500hp with a Barry Grant carb but the Holley won out thanks to a nice, flat torque curve. Being a street car, that’s what really counts.

Spike’s always had a soft spot for the first of the GT Falcons and there’s a genuine Aussie four-door example in the garage. He’s also owned an XT and an XW HO, so you could say he’s got a bit of a thing for Blue Oval muscle, though it appears it wasn’t genetic. 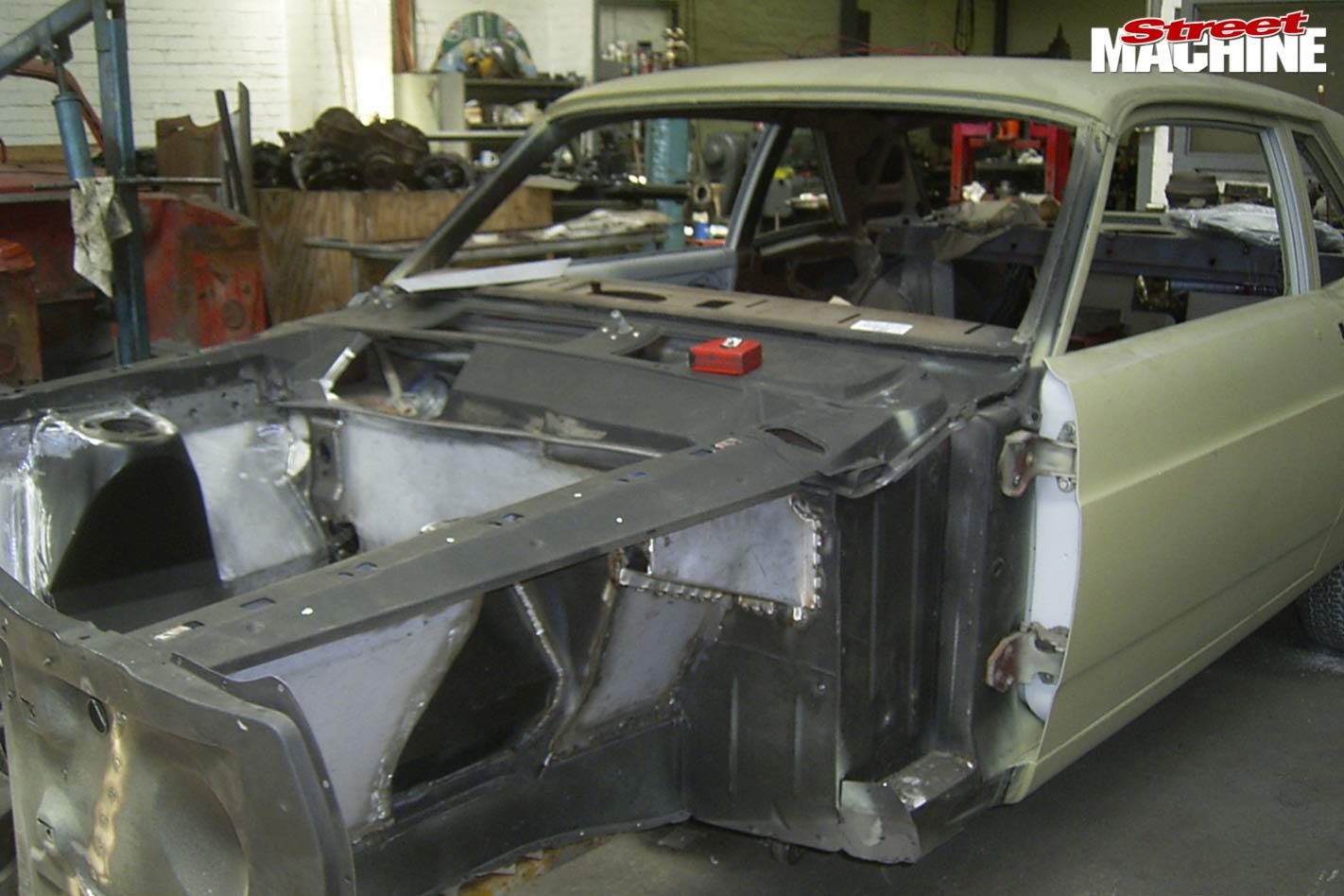 The strength lost from the removal of the shock tower braces was more than made up by these box sections that tie the shock towers to the firewall. Best thing is, it’s all hidden behind the inner guard

Don’t know about that. After all, a bloke who builds a car that makes you do a double-take, then keeps surprising you with neat little touches the more you look at it, is pretty sharp.

And it seems even a few of his old mates fell for his GT-in-disguise.

“A couple of guys in the GT Club came up and said: ‘You put a new set of wheels on the XR. It sounds a little different too.’ I opened up the engine bay and they said: ‘What have you done in here? It’s a Clevo!’ I said: ‘Yeah, I welded up the back doors too!’”