What if Shelby had built a Mustang to take on Porsche and Ferrari? This Indy V8-powered beauty answers that question

IT’S NO secret that ’65-’68 Mustangs won plenty of touring car and sports car races around the globe. From down here in Oz, to back home in the US and all through Europe and the UK, Lee Iacocca’s cheap and cheerful coupe flogged expensive Jags, Alfa Romeos, Mercedes and BMWs, as well as more workaday Cortinas and Minis, and plenty else besides. 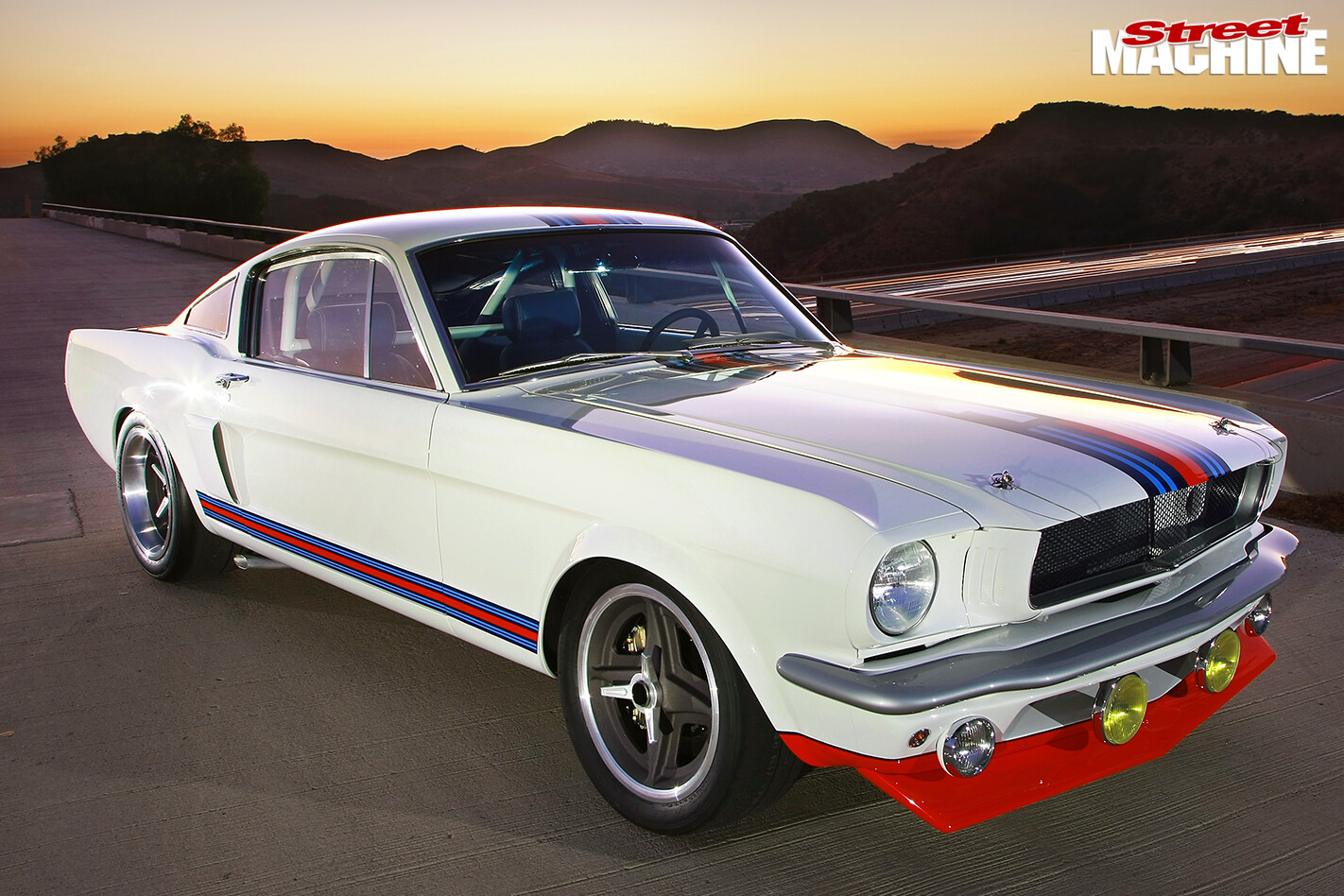 Their success didn’t come from anything more exotic than good old-fashioned Detroit horsepower in a nice, light coupe body. But what if Ford had gotten really serious about making the Mustang into a stripped-down, hopped-up road racer to take on the best from Ferrari or Porsche?

That was the concept dreamed up by Steve Strope at Pure Vision Design in California’s Simi Valley. He was inspired by the crazy factory race specials whipped up in manufacturer skunkworks back in the 60s, imagining Ford execs partnering with the powerhouse European motorsport team of the era, Martini Racing. 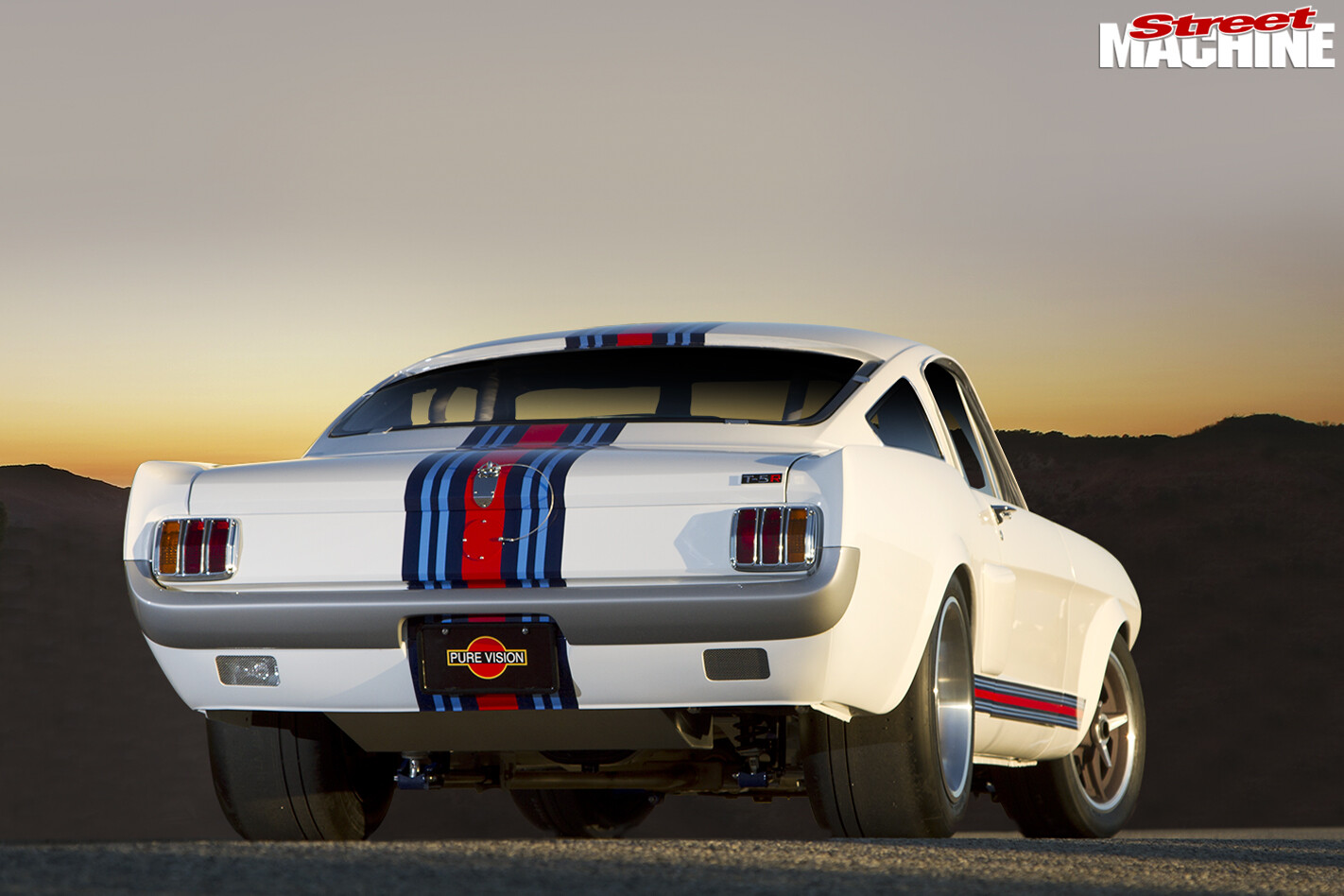 The mid-60s was when race teams really started concentrating on shedding weight, so Pure Vision started its phantom ’Stang — known as the T5-R — by getting the body trim. While it would’ve been easy to go nuts with carbon-fibre, Steve kept the car period-correct, sticking with fibreglass and plexiglass, as well as smatterings of magnesium and aluminium.

It was important to Steve that the car look like a period Ford factory product, so Shelby American supplied the side scoops, plexiglass rear quarter-windows and Shelby R-model plexiglass rear window.

The R-spec style rollpan has meshed cut-outs to allow air through to the diff cooler, while an era-correct Talbot rear view mirror and European market tail-light lenses were also fitted. The bootlid was hand-made, the aluminium skin fabricated by Bob Marianich with the original brace drilled and punch-flared. Even the bonnet hinges have been shaved, with the latch going in the bin, replaced by lightweight pins.

After all this work, Mick Jenkins coated the shell in PPG Carrara White and added Martini stripes for that authentic 60s look.

While the 289 and 302 V8s were the backbone of Mustang race cars in real life, Strope knew of a far rarer and more exotic mid-60s Ford engine perfectly suited to the Ferrari-busting bill. Under the T5-R’s bonnet lies a quad-cam, 250 cubic inch alloy V8. 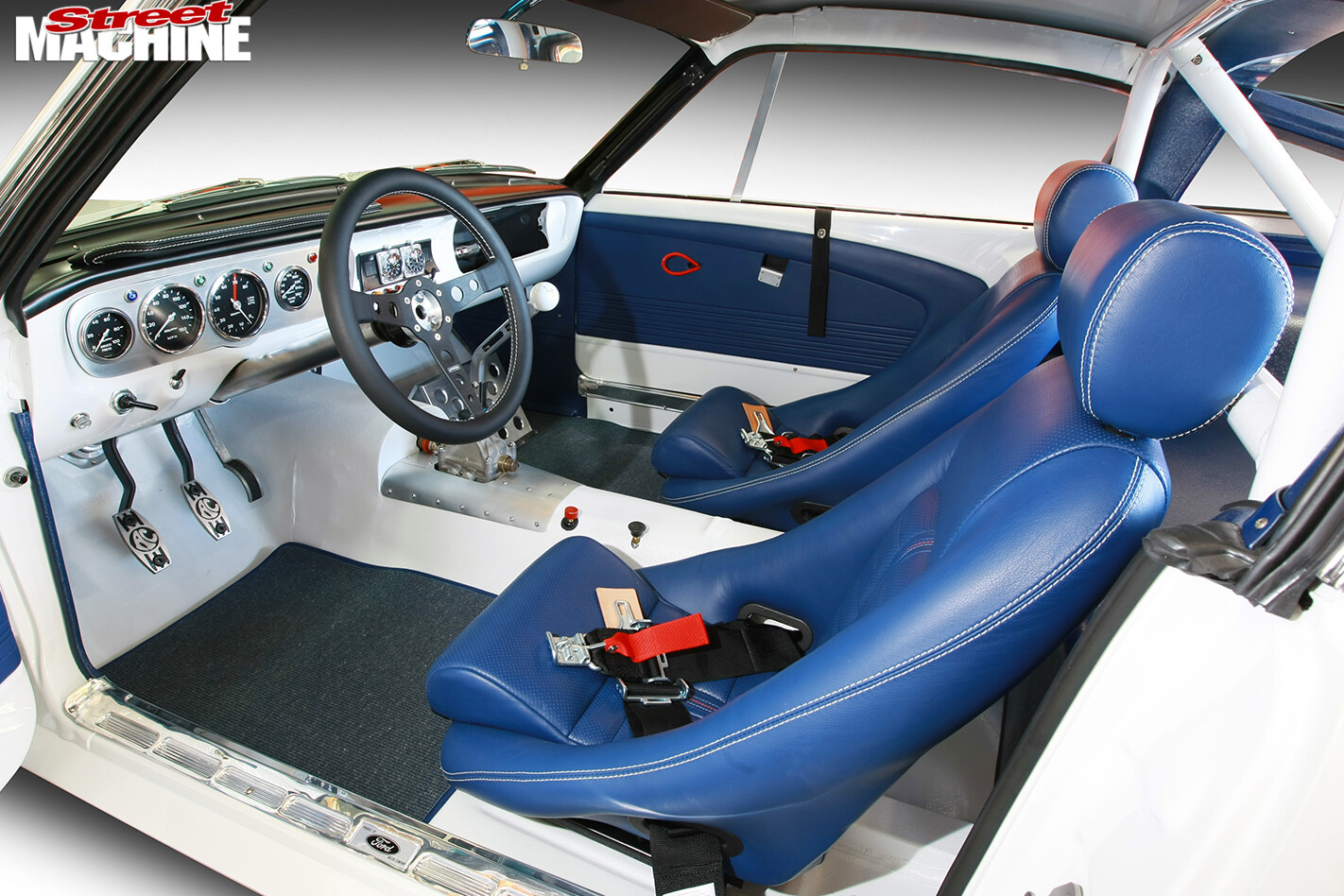 This isn’t just any old open-wheeler race engine — the tiny screamer was used in the legendary Lotus-Ford Type 38/5 Indianapolis 500 racers, the first rear-engine car to win the blue ribbon event. But while the 135kg V8 is still dressed with its magnesium covers and sump, it hasn’t been left alone.

Steve had Ed Pink Race Engines punch it out to 300ci and add milder cams to make it more street-friendly. The same reasoning led the Ed Pink team to swap the mechanical injection for a Holley EFI set-up.

7
The wide donk is a tight fit, with the fabricated firewall pushed back three inches to suit. The shock towers were also ditched and plated over. EFI and mild cams help make it streetable but it retains the race car dry sump set-up

Fitting a dry-sump open-wheel race car engine into the tight confines of a Mustang engine bay was tough. The firewall was recessed three inches, while the strut towers were cut out and plated over. The air inlets were moulded into the radiator support, while the recess for the oil reservoir was cut into the inner guard.

As the engine’s original snake nests wouldn’t work in a front-engined car, Aron Cranford whipped up some custom headers, while Aviaid was responsible for the one-off dry-sump tank and heat exchanger. 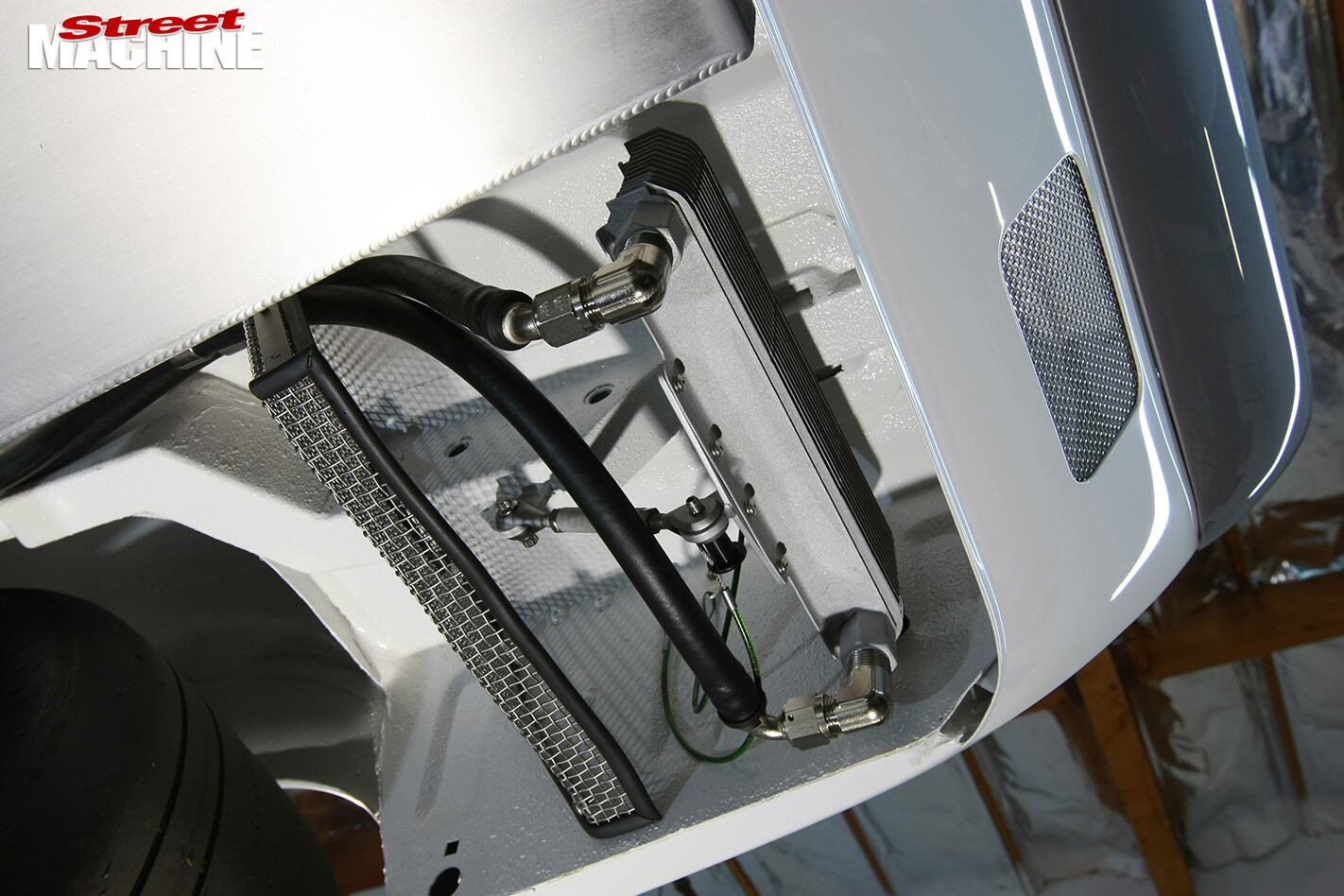 Steve hasn’t pushed the engine too hard for fear of destroying a piece of history but it still stomped out 425hp, which is plenty in a little Mustang.

Behind the Indy donk, a QuickTime flywheel, clutch and bellhousing are fastened to the seriously lightweight (28kg!) four-speed C&R Racing NASCAR manual gearbox.

Pure Vision decided to run the ’box exposed, so the floor was heavily reinforced and a removable aluminium two-piece cover-plate fabbed to cut weight.

While Steve kept it period perfect everywhere else, the suspension and braking are bang up to date. The Detroit Speed & Engineering rear-end is a work of art, and is paired with the same brand’s front cradle.

With lightweight aluminium construction, double wishbones and coil-overs, plus rack and pinion steering, the Pure Vision Mustang points like no other ’66. And thanks to the Quadralink four-link coil-over rear-end and Panhard rod, it also grips out of the corners like no other ’66.

7
Out back is a Quadralink four-link rear, with coil-over shocks and a Panhard bar, while the whole body has been tightened up with subframe connectors and chassis strengthening sections

The cradles have been harnessed to a full set of subframe connectors and chassis strengthening sections to reduce flex and improve handling. The Simi Valley boys then added a Flaming River column with a quick-release hub for the MOMO Prototipo tiller.

7
LEFT: AC Cobra pedals contribute to the era-correct perfection. RIGHT: The C&R NASCAR gearbox weighs in at just 28kg and runs a fabricated shifter handle. The tunnel was heavily modified to suit the exposed trans and includes a removable cover plate

It is clean, simple and era-perfect. You could imagine Sir Jack Brabham or Jim Clark sawing away at the wheel while flying through the forests at Germany’s Nürburgring or powersliding around the banking at the famous Monza circuit in Italy.

7
Shelby R model radio delete plate was used to mount the exquisite rally clock and chronometer.  Steve picked up the cool warning lights on a trip to the Goodwood Festival of Speed in England

While it hasn’t yet been raced, Karl Williams, the Texan who owns the T5-R, killed the competition at SEMA 2012, taking the Ford Design Award for Best Of Show and Mothers Shine Runner-Up Award.