MICHAEL Scicluna is no stranger to bitchin’ street machines. He owned a show-winning 1968 SS 396 Camaro in the mid-80s, followed by a 1968 GTO Pontiac, a very tidy ’66 Mustang coupe, and has another matching-numbers 1968 396 big-block RS SS Camaro that’s currently in the works.

“But when I saw my friend Peter Papas’s sweet ’67 Fastback, I fell in love and knew I had to have one,” he says. So Peter introduced Mick (as he’s known) to Leo Banks from the Muscle Car Factory (MCF), who had the perfect candidate — a genuine ’67 390 GT four-speed.

“It was a rusty barn-find out of Minnesota,” Leo says. “It needed every panel replacing.” 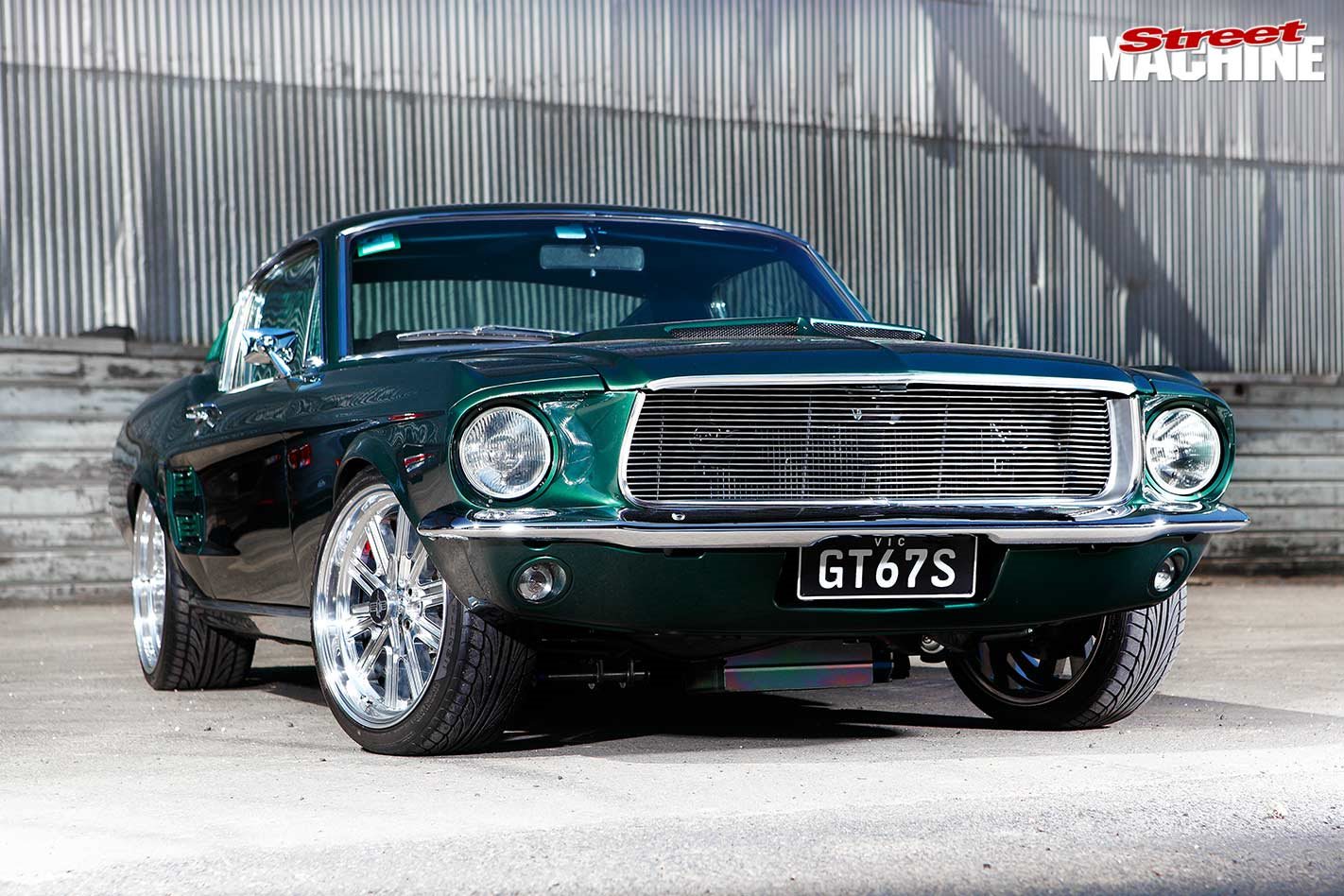 Like the re-engineered suspension, the billet grille and halogen headlights drag this ’67 GT kicking and screaming into the new millennium

“Not so,” Leo insists. “Even good examples have issues. Rather than starting with a big-dollar car that still needs fixing, it makes more sense to start with a cheaper, rougher example. It costs about the same in the end but this way you know all the steel is good.”

Several months into the project, things were going well — the bodywork was complete and had been painted in factory Dark Moss Green. 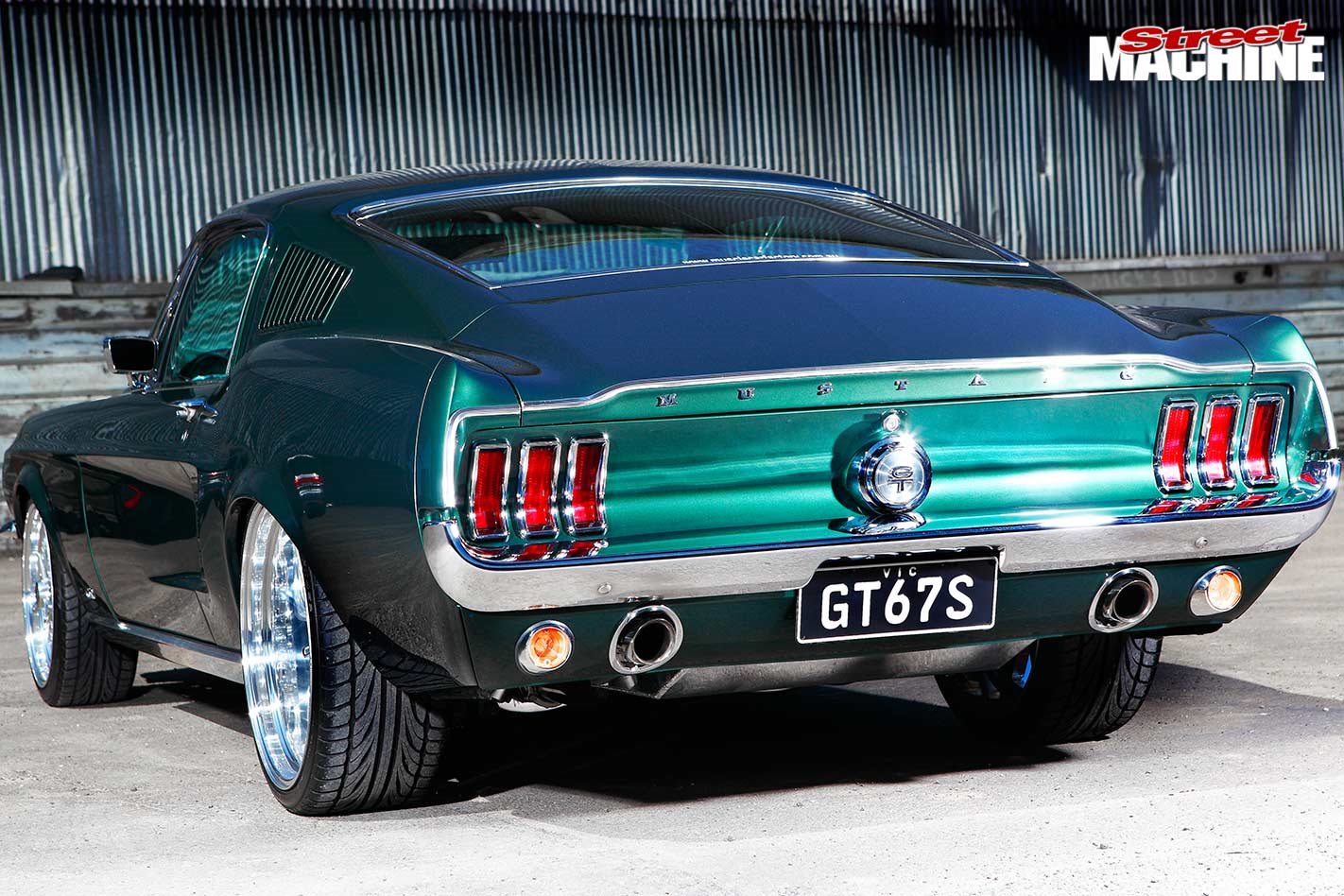 Mick wasn’t scrimping either; all the moulds had been painstakingly fettled by Frances Auto Bling for perfect fit, every lens was new, as too was all the glass, which Dave Ryan from Classic Auto Glass tinted factory green. Yep, all was going very well indeed — then Mick threw a curve ball.

The project started out as a dedicated concours build until he saw what some of MCF’s other customers were building. Then he wanted to amp things up big time but without interfering with the completed body and paint, and retaining the ability to return everything to 100 per cent standard. In short, all the mods would need to be bolt-in.

First up, the engine. The 390 was put aside and an era-correct 427 FE cross-bolt side-oiler was sourced from the States and shoehorned between the towers. 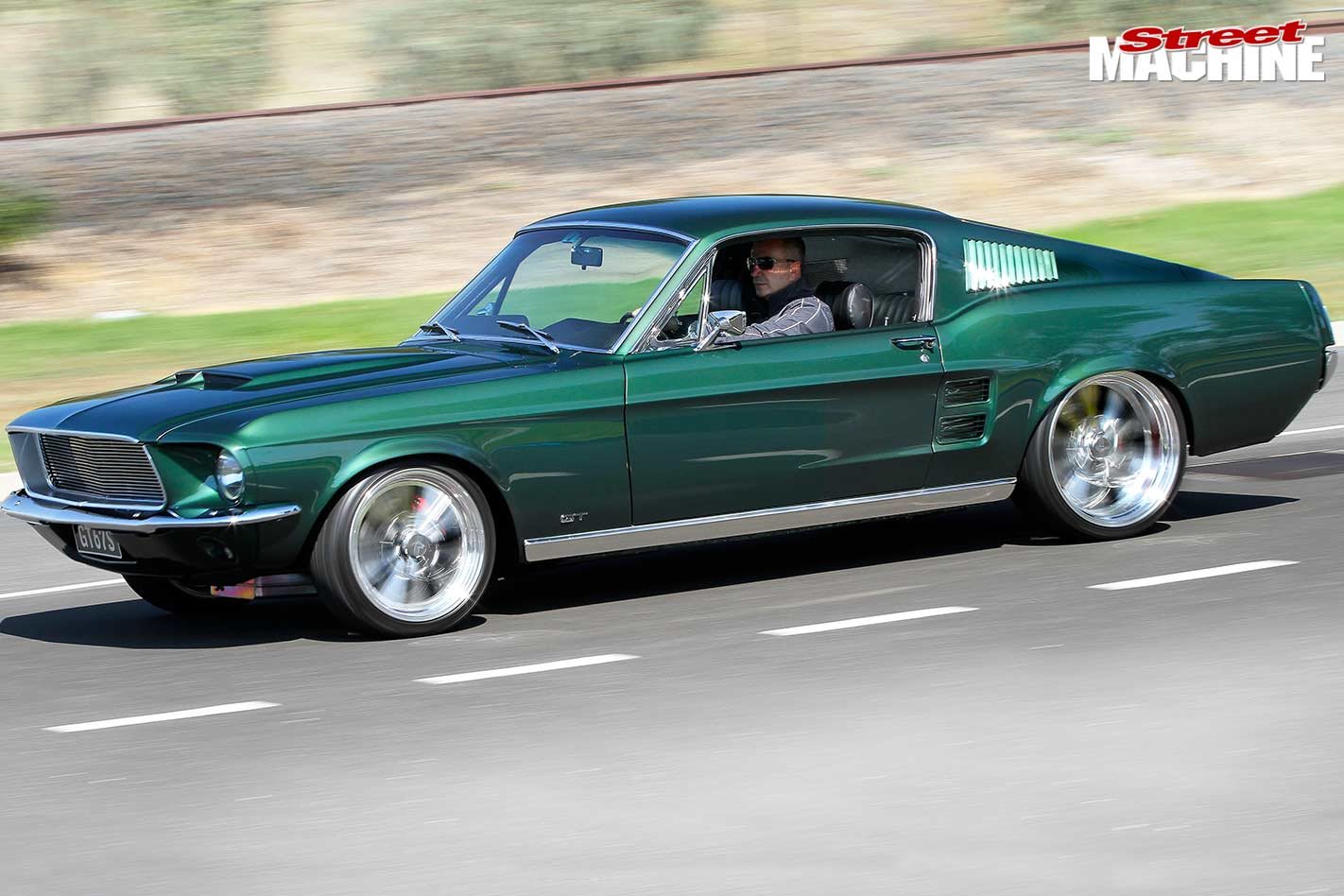 This is the same NASCAR-winning mill that powered the legendary GT40 to two of its four Le Mans victories and transformed the AC Shelby Cobra from spirited sports car into muscle car megastar.

Whisking away the spent combustion gases are custom extractors that dump into a two-and-a-half-inch stainless steel exhaust system. 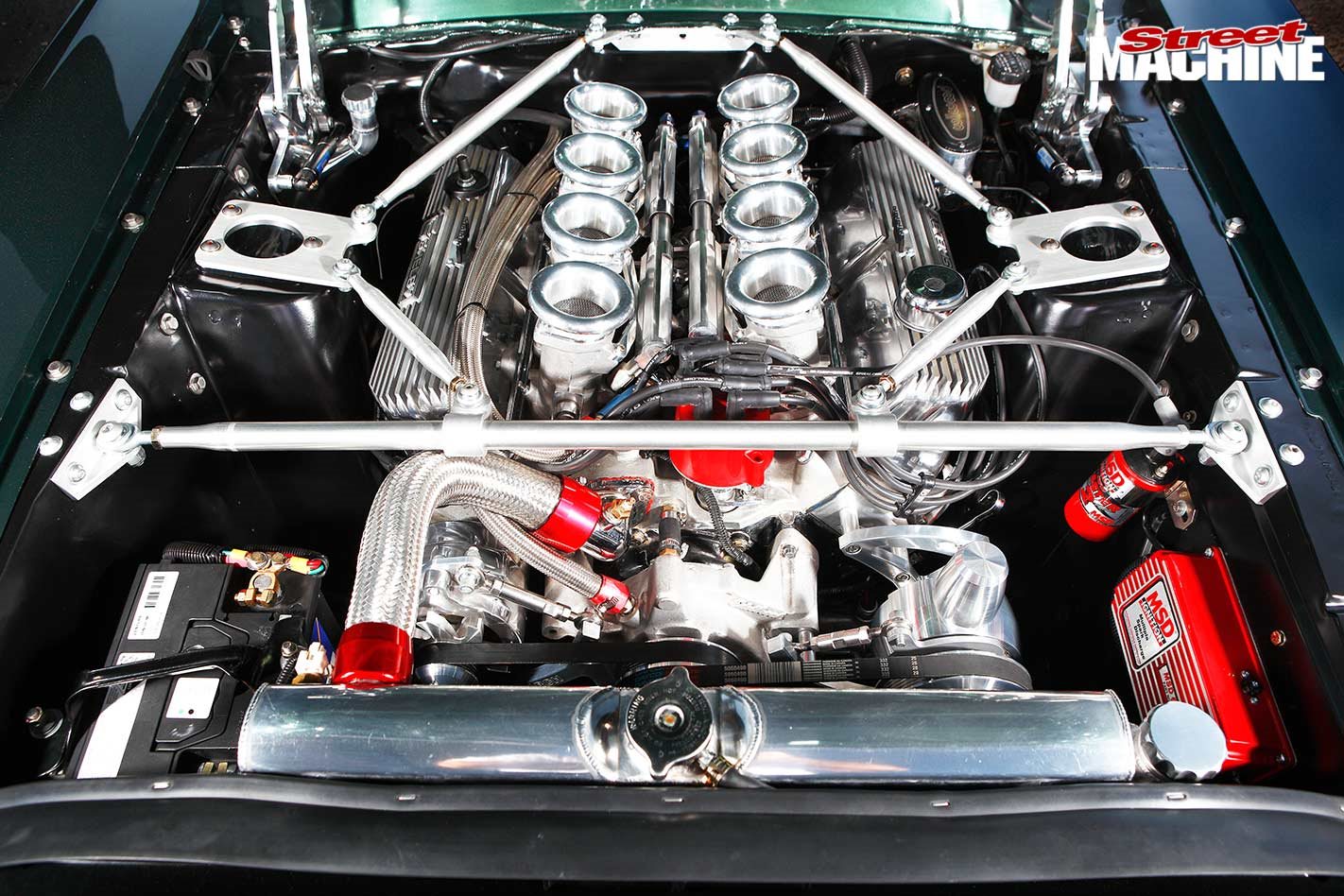 The original four-speed top-loader was also set aside; cog-swapping duties are now handled by a five-slot Tremec TKO 600 outfitted with 2.87 first, 0.64 fifth and a concentric hydraulic clutch (ie, no clutch fork). Keisler Engineering reshaped the TKO’s rear extension housing so that it would fit in the tunnel without having to modify the body or crossmember. Rounding out the driveline is the obligatory Ford nine-inch.

Being a professional driver, Mike was quite clear about how he wanted his new stallion to handle and drive. To this end, a Total Control Products (TCP) power rack and pinion steering and twin A-arm front end were slotted in under the nose. Using alloy VariShock coil-overs that run off the lower control arms, the TCP gear provides improved geometry along with superior adjustability and responsiveness.

Out back, MCF devised its own triangulated four-link suspended by QA-1 coil-overs. All this suspension trickery enables 18x8 and 20x10-inch Dragway DB5s to reside under stock guards. Yep, 20x10s on the back with no flares or mini-tubs.

Hauling things to a standstill is a trick Wilwood brake set-up, incorporating a billet master cylinder and a hidden booster that activates four-piston calipers over 300mm rotors at each corner. 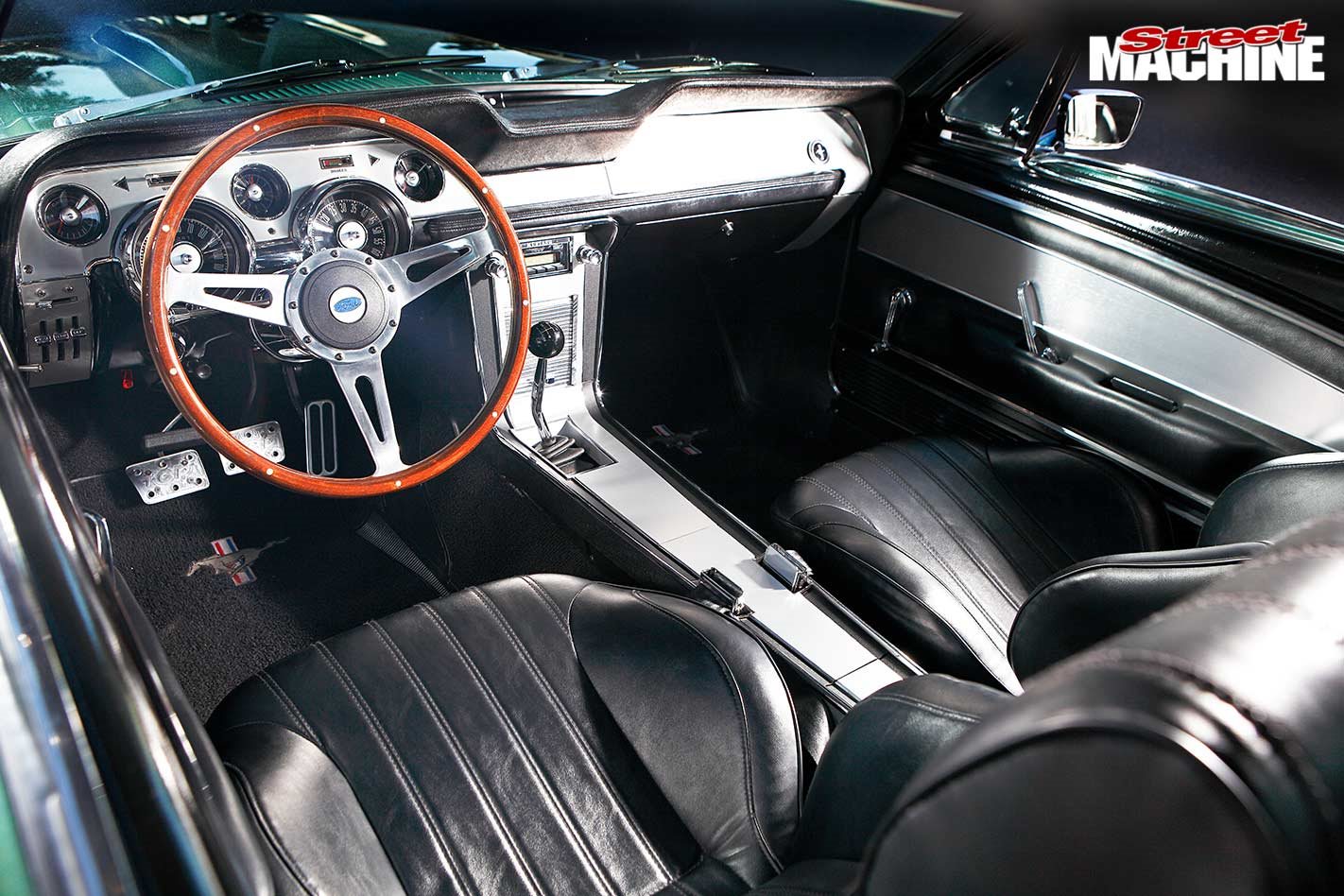 Inside the cabin, it’s pretty much Ford 1967 — except it’s all brand new. Mick opted for the full deluxe trim kit, which incorporates GT Deluxe gauges and a Shelby wood-rim tiller. In keeping with the ’67’s new super-muscle car persona, the factory low-back buckets have been replaced with hip-hugging ProCar Rally buckets, with a matching rear seat covering.

From the outset, Mick wanted a stock Mustang that stood head and shoulders above its peers. He’s ended up with a sensational streeter that’s much, much more.

“The engine makes bags of torque and is effortless to drive,” he says. “The TKO is beautiful — just tap it and it goes into the next gear. It’s a really easy car to drive and it turns a lot of heads.”

Most of us would be satisfied with such a stellar ride. Not Mick; he and MCF are already on the next project, another ’67 Fastback. This time with a Boss 429 and mini-tubs — it’s going to be a whole lot tougher.