IT’S AN age-old story: ‘I loved car x from a young age, always wanted one, but could never find the right time to tackle that long-dreamt-about build.’

This wasn’t a problem for David Jones, the justifiably proud owner of this sensational ’68 Camaro. David was a man with a plan and plenty of patience, just waiting for a great ’68 to come along. Back in 2006, sensing that decent donor cars were quickly evaporating, he pounced on this one when it popped up even though he wasn’t quite ready to do anything with it at the time.

“Dad not only loaned me a big chunk of money to buy the donor, he also came with me to pick it up from an Adelaide-based importer,” David says. “It was probably the ugliest Camaro I’ve ever seen. All the panels were a bit banged up and it looked like someone had sat on the roof. I think Dad thought I’d lost my mind!”

Yet despite its unpromising exterior, the car was actually very solid, with virtually zero rust. Even so, most of it would end up in the bin. “Ninety percent of this car is new,” David says.

Every panel is new except the bootlid. It’s also 100 per cent faithful to the original, bar the 2in cowl hood, Ridetech fuel filler and Detroit Speed RS headlight conversion – no need to mess with one of Chevrolet’s nicest and most enduring shapes

After a seven-year stint parked in the shed, the build officially got underway in 2013.

“I’d crashed my big-block HQ,” David says, “so it was a case of fix the Kingy or start on the Camaro.”

The task of revealing this car’s inner butterfly was tasked to Tony at Tony James Car Restorations. Rather than attempt to massage the 45-year-old panels back into shape, Tony replaced every panel except the bootlid with brand new AMD sheet metal. Sourced through Muscle Car Factory, the fit of the AMD gear was superb, according to David. To ensure the first-gen remained rust-free for the next millennium, the inner structure along with the insides of every panel were blasted and epoxy-primed prior to reassembly.

With their black powdercoated centres and black stainless assembly bolts, the stunning and uber-expensive Forgeline ZX3P wheels are perfect for this purposeful pro tourer

As well as adding mini-tubs, welding in the rear suspension cradle and filling every unwanted factory hole in the engine bay, bonnet and boot, Tony James Car Restorations was also responsible for the stunning paintwork. David thinks the colour is off a Range Rover, yet it still looks period-correct on the Camaro.

“I sat down for hours and hours going through thousands of colour chips before finally narrowing it down to four,” he says. “Tony mixed each one and sprayed it out on the old quarter panel. As soon as we took it outside in the sun, Arizona Blue was the obvious choice – even the name suited the car.”

“As cranky as the engine is, the tuning on the EFI lets me idle from 900rpm – normal – right down to 600,” says David. To give the Cam stopping power without a booster, a 6.5:1 pedal ratio and 1in-bore master cylinder have been used

Originally the build was going to involve the stock chassis and a GM Performance ZZ427 crate motor. But after David consulted with his engineer and discovered he could use a Chassisworks front clip (see sidebar), things started heading in a different direction.

“While I was building the car, a good mate of mine, Mark Knibbs, was also building a similar-spec ’68 Camaro,” David says. “We continually bounced ideas off one other, which is how the Chassisworks front end came about. I’m not sure who has cost who more money, because Knibbsy’s now getting one of these chassis as well!”

Supplied by Muscle Car Factory, the laser-cut, jig-welded chassis completely replaces the factory front clip. It brings a host of improvements thanks to modern geometry, unique stub axles, forged alloy hubs, power rack-and-pinion, integrated sway-bar and adjustable VariShock coil-overs. The slick set-up enables the Camaro to ride low over big tyres without munching them or riding like a brick.

Unlike a lot of builds that leave the steering wheel on the wrong side, David ticked the RHD option box when ordering the front end. From there, Ian Warren finished the right-hook conversion using an HK pedal box, plus lots of slicing and dicing of the dash, firewall and plenum. Even the wipers sweep the right way – nice job, Ian!

The all-new front end is matched by the Chassisworks four-link rear end, which went in with no cutting. It supports a fabricated nine-inch filled with Strange centre, alloy pinion support, 3.7:1 gears, Wavetrac LSD and big, beefy 35-spline axles – the word bulletproof kinda comes to mind.

No ZZ427 cratey ever looked like the sexy bit of gear lurking under the hood.

“I asked John Pilla from Powerhouse Engines to toughen it up a bit,” says David. “I’ve known John for 20 years; he lives down the road from me. On the dyno, the crate motor made 497hp, like it’s supposed to, but…” In the end, they ended up using only the block, crank, balancer and rocker covers in the quest for more power.

They also went EFI, with Steve Day machining up a custom eight-throttlebody EFI manifold. This was possible thanks to the symmetrical intake ports on the alloy CID cylinder heads – unlike the factory head’s siamese ports. Steve Newing from EFI Hardware was monumentally helpful when it came to mounting the fuel rails, sorting all the sensors and picking the right injectors. Once John had finished working his magic and dialling in the Haltech Elite 2500 ECU, they pulled the string on the dyno, where the 427 churned out 709hp. With peak power at 6600rpm and 581lb-ft at 5000rpm, it’s an impressive, stress-free, PULP-friendly street engine. For a closer look, check out Mill Of The Month in the July 2018 issue.

“I lot of people asked why I built a heavy big-block,” says David. “There’s a lot of history with the ’68 model and 427 big-block – it was the ultimate engine back then.”

This history involves names like Yenko, Dana and Baldwin-Motion, the select few Chevrolet dealers approved to remove the factory-fitted 396ci big-block and swap in the fire-breathing 427. With less than 100 reputedly built, each one was an instant legend.

The retro-style gauges are fully electric Dakota Digital VHX items that slot straight into the stock gauge pod. Next to it is the four-knob controller for the Vintage Air a/c unit

To sort the exhaust, David tried the Pacemaker tri-Ys from his big-block HQ. “They were bloody close,” he says. “I unpicked the welds, changed a few things around and they worked a treat. It might sound easy, but it was a lot of work.”

David was also on the job when it came to rewiring the Camaro. This is the first time he’d done EFI, admitting that making it all neat yet serviceable was definitely a challenge. Luckily good mate Jock helped Dave get his head around it.

Like the rest of the trophy-winning interior, the nicely integrated retractable belts are the work of Manny at The Trim Shop. Made by Seat Belt Solutions, they’re Australian-approved, engineer-friendly and feature period-style chrome buckles

Taming the 700-plus horses is Tremec’s toughest five-speed, the TKO600. The whole kit – including the gearbox, 11-inch clutch, billet flywheel, bellhousing and concentric slave cylinder – was supplied by Mal Wood Automotive.

The tasteful and stylish interior is yet another of this Camaro’s numerous standout features. “I went to Manny at The Trim Shop with a ton of ideas,” says David. “Luckily he talked me out of pretty much all of them; every idea he had was better than mine! In the end I just let him go for it. It runs a close second to the engine bay as my favourite aspect of the car.”

Underneath the stick is a Tremec TKO600. David thought about stepping up to a T56, but that would have meant cutting the tunnel and therefore having to alter the factory console that he was originally going to use

Built from scratch, the factory-like door trim design flows from front to back. The billet inserts throughout the interior and boot were all handmade. Even the modern seats now incorporate a period-like design.

“I love the colour of the fine-grain Nappa leather,” says David. “It works so well with all the black in the interior, as well as the body colour.”

David’s kickarse Camaro was a smash hit at Meguiar’s MotorEx 2018. It drew crowds all weekend, with many people commenting that it was their favourite car of the show. Then, at the American Legend Wheels Street Elite presentation, it picked up a gold medal for Engine Bay along with silvers for Paintwork, Interior and Design & Execution, and a bronze for Bodywork. Then there was the big one: the Pinnacle Award for Street Machine/Muscle Car! It was great to see such a well-thought-out, well-executed and very usable car do so well in the judging. David’s Camaro really does set a new benchmark when it comes to pro tourers.

Chassis technology and suspension geometry have come a long way since the engineers of the 60s designed your favourite muscle car. And just like going from leaf springs to a multi-link set-up in the rear offers a multitude of benefits, so too does opting for a well-designed complete new front end. In short, the car will track better, have sharper steering, handle better, brake straighter, and have superior feel, feedback and grip – none of which you get by revamping the stock front end.

“I costed up tubular arms, coil-overs, plus a rack-and-pinion conversion, and the complete Chassisworks bolt-in front clip wasn’t much more,” says David. “As well as being a much nicer starting point, there was a dropdown box on the website where you could select right-hand drive. It really was a no-brainer.”

The goal for this stunning-looking engine was to crack 700hp on pump fuel. John Pilla (Powerhouse Engines), Steve Day (Affordable Engines & Transmissions), Steve Newing (EFI Hardware), Luke Waldon (Haltech) and John Konstandinou (CID Heads) all nailed it, with 709 glorious horses! “Steve Day did a beautiful job with the custom-machined inlet manifold,” David says, “while Steve Newing went to great lengths to get the injectors pointing at the valve at a 20-degree angle – key to the engine’s really good street manners” 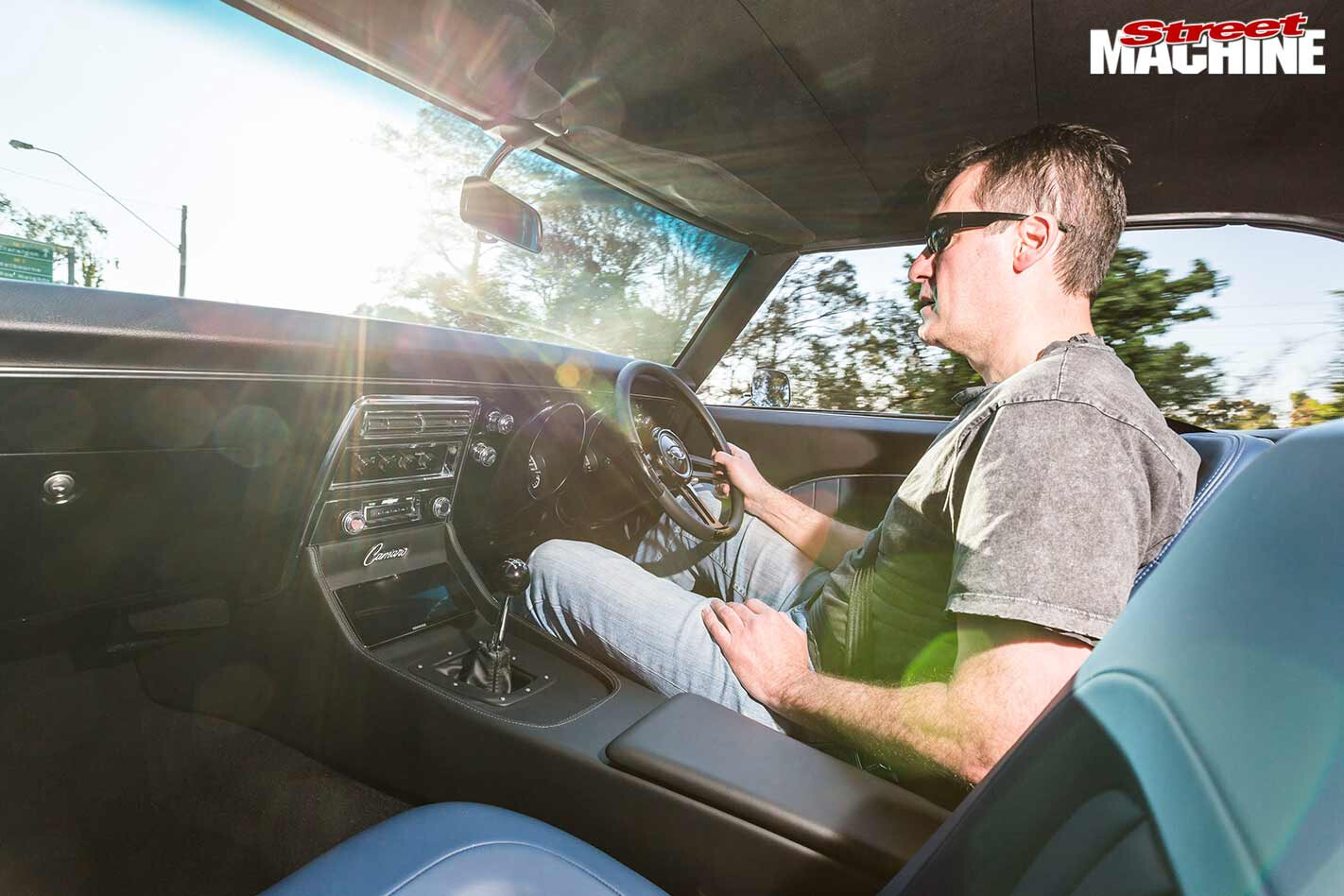