SOME of us are lucky enough to enjoy the sweet character of a V8 every day, commuting to work in something tasty. Others spare the coin for a more classic — or cranky — weekend warrior. You lift the garage door to shrug off the working week with a cruise to the beach, the pub or the track, the missus grinning and the kids giggling.

Richard Diver enjoys his sensational 1968 Mustang every day— but not in quite the same way as most.

“It’s on display in my house!” he says. “I have a lovely couch in front of it, plenty of space around it and I just enjoy sitting there looking at it.”

Body widening required a mountain of work, from the sills to the lid. Burke’s Metalwork employee Phil Adamson created much of the metal magic

Here’s a bloke who is simply too damn busy to get out in his mental Mustang very often but at least has the smarts to stash it where he can look and yearn, cold bevvie in hand, rather than burying it under a blanket in a backyard shed.

“Having said that, it drives like an absolute dream,” Richard continues of his automotive artwork. “It drives like a brand new car.”

Maybe because it is brand new. Built and complied under New Zealand’s sensible Individually Constructed Vehicle scheme, Richard’s Mustang fastback began life not in the 1960s but as a reproduction Dynacorn body shell.

Jason Burke, who runs Burke’s Metalworks in Christchurch — and whose 1970 Barracuda we featured in SM back in Oct ’05 — takes up the story.

“I’d dealt with Richard before, with an old Mustang he’d bought to cruise around in. That was his ‘get-into’ Mustang, your typical tarted-up caryard special. It wasn’t that flash and every time he drove it, something fell off it or it stopped.

“He came back later and said: ‘I want to get into these things.’

“He went straight for the top shelf, saying: ‘I want to build the best Mustang we can.’ He’d seen other cars we’d built, and what we were doing in the shop, so we sat down and worked it all out.”

Jason and his team decided a brand new shell would be easier and better for the bucks. Everything was measured in preparation for a right-hand drive conversion using RRS parts, along with all the other tricks and tweaks Richard wanted.

“He wanted huge wheels, so we got stuck into the rear guards and wheelhouses to allow room, but the more tin we cut, the more we thought: ‘Why not just widen this thing?’ It was evolution. I don’t think any of us realised how far things would go when we set out to build this car.”

The process was theoretically easy but practically tricky. “In effect we sliced off both sides of the car,” Jason explains. “Then we added to the roof, to the back guards and the door frames, put the skins back on, added to the front guards and sills and then made new front and rear panels to fill it all in.”

The visual effect is terrific, giving a far more muscular stance without the traditional tweak of a roof chop.

“The floor and centre body are standard,” Jason says. “If you break a window, it’s factory Mustang glass. In the beginning the widening was ‘faaark’ but we learned a lot and now it’s the best thing we did.”

There are plenty of other mods too. The bonnet scoop is obvious but the raised scuttle behind it isn’t. Neither are the reshaped wheel openings, deepened sills or relocated front chassis rails — they were raised to allow a lower ride height with the chosen wheel size without skewing the suspension geometry. That lifted the engine in relation to the engine bay, which is why the scoop went on.

Power arrived in a box, ready to roll, from Roush in the US. It’s an EFI, hydraulic cam, alloy-headed 427ci Windsor. It was the no-fuss way of getting a drivable but punchy 500hp into the car. The C4 three-speed trans was also a US export

The rear rails are up too and there are other custom touches — flat firewall, rejigged shock towers — everywhere you look. The Burke’s team (Jason, Phil Adamson, Steve McLachlan and Greg Griffin) put in a fine effort over the two-year build.

That time caused some frustrations: “We had a few components that were out of warranty by the time we realised there was a problem,” Jason says.

No such worries with the glorious paint that Greg applied. It’s a Glasurit cocktail of Aston Martin Silver and pearly blue stripes.

The sensational bridge-like brace was mocked up from craft wood before being one-off CNC machined for this car. With details such as the remodelled firewall and relocated brake booster, the engine bay is as special as the brace that spans it

The leather interior reflects a European theme; comfortable and classy rather than in your face. The electric seats are BMW and the foundation for most of the trim is alloy sheet, engineered to clip together for a seamless appearance and easy serviceability. The dashboard and most of the centre console was scratch-built and can be lifted from the vehicle in less than 30 minutes to service hidden under-dash components such as the brakes.

“There isn’t one thing in there from a Mustang but put someone in it and they’d know straight away they were sitting in a Mustang. Richard wanted something unique and he let us use our imagination and skill. At the same time we didn’t want to build some obscure custom thing.”

Mechanically the Mustang is roadworthy yet tough, Pro Touring with a dollop of Kiwi smarts. The result is a Roush-built injected 427ci small-block Windsor with 500 horses tame enough to cruise.

“Importing an engine built, dynoed and ready to install was quick and easy,” Jason says. “Same with the trans — but if there was anything I’d do differently, it’s that. A four-speed auto would be nice.”

The final product is a blend of art and soul that owner Richard thoroughly respects and enjoys as often as he can.

Instrument panel looks Mustang but it’s not. The Auto Meter-stuffed module was built in-house and can be lifted from the car to allow easier servicing of the under-dash brake bits. There are no gaps from the A pillars to the rear of the console. Seats are BMW electric units

“It’s not that I don’t want to or it’s too precious, but I know the effort Burke’s put into it and to me, the story behind the car is as important as driving it.

“As well as the time and effort that went into building it, I know the hardship that went into paying for it; with the GFC halfway through, it was touch and go there for a while. But I bit the bullet.” 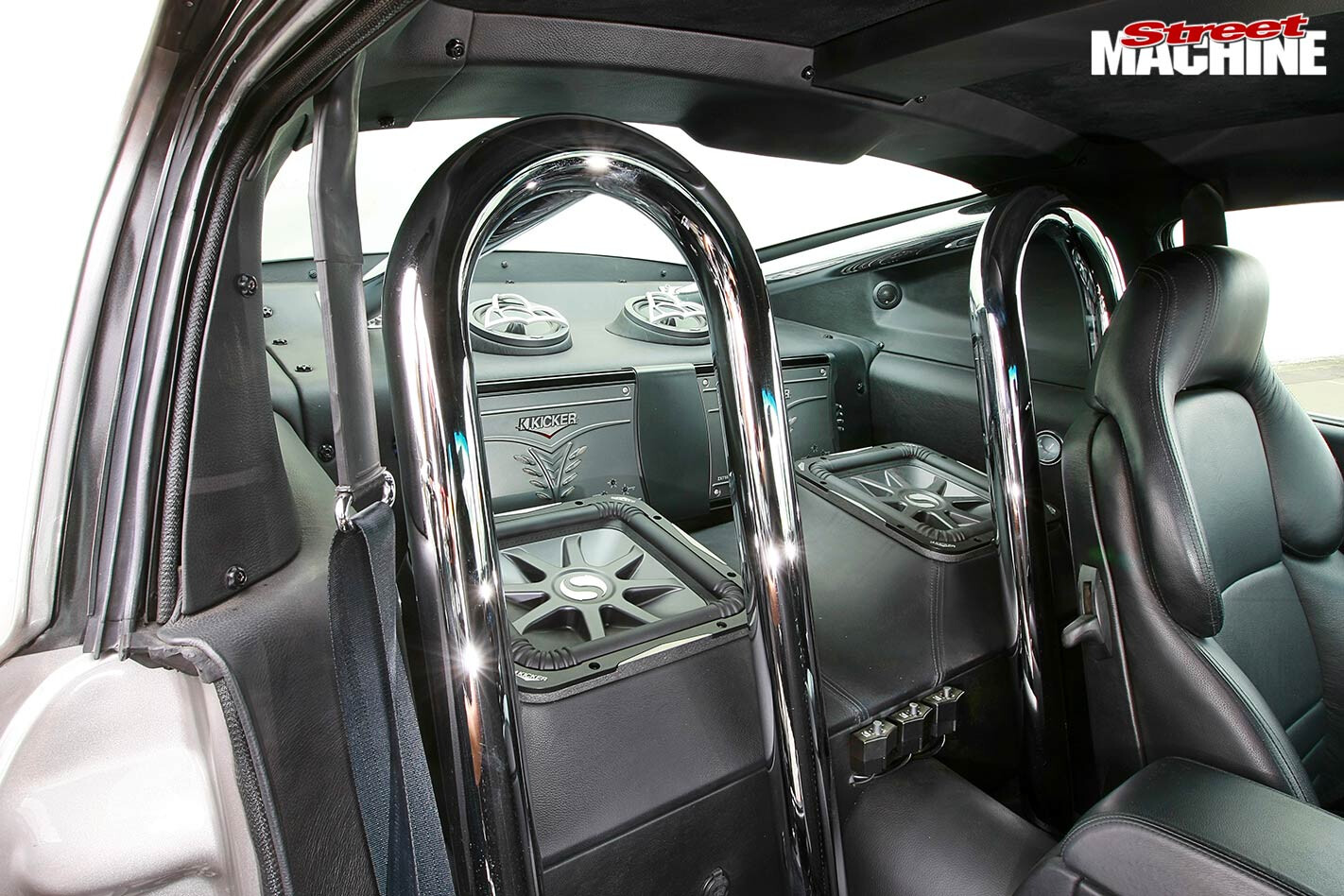