WE’VE all heard of grandpa cars lurking out there. You know, mint one-owner originals parked in a shed, driven to church, sitting idly in a country town underappreciated. Tom Wills’s 1968 XT GT replica is one such car. Starting life as an XT Fairmont with 221ci six and auto box, the red sedan was discovered rust and trouble free in the mid-north of SA with barely 38,000 miles on the clock. Tom, who was 15 at the time, knew a good buy and grabbed the keys to become the car’s second owner. 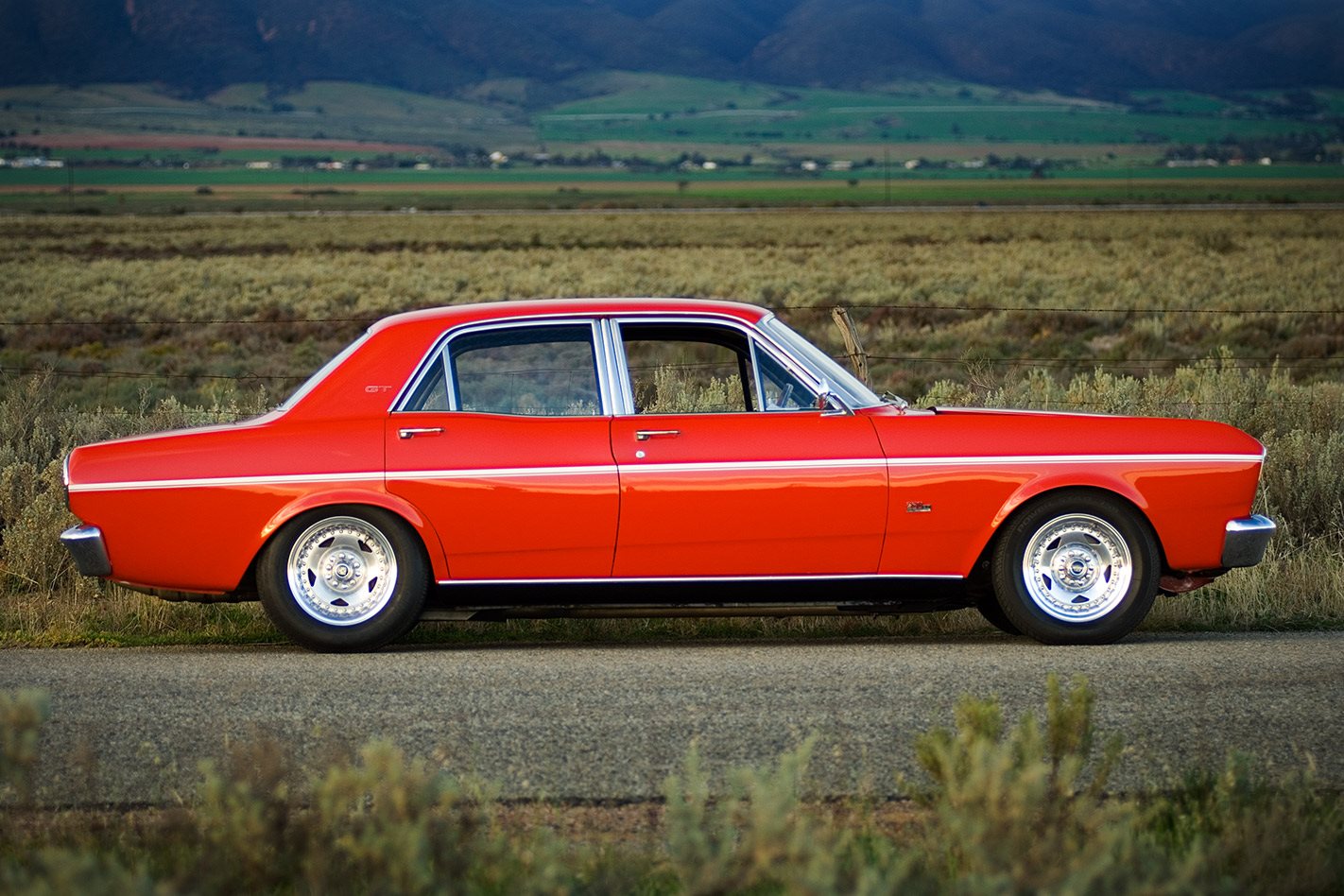 A rare find indeed, the XT’s body was near mint with absolutely no rust anywhere, and was painted in Holden’s Salamanca Red

“I was looking for a car to do up as a GT,” explains Tom. “I ended up going for an XT partly because you don’t see that many of them. XYs and XWs are obviously the most popular, then the XRs because they were the first model, but the XTs are a bit different.”

The body was perfect, bar some faded paint, and the original driveline was fine, if underwhelming, so the first step for the project involved replacing the straight-six with a 289 V8 Windsor matched to a five-speed manual. This was no rattly 289 pinched from a tired LHD import Mustang, but rather a hand-built competition motor running high compression on Avgas. 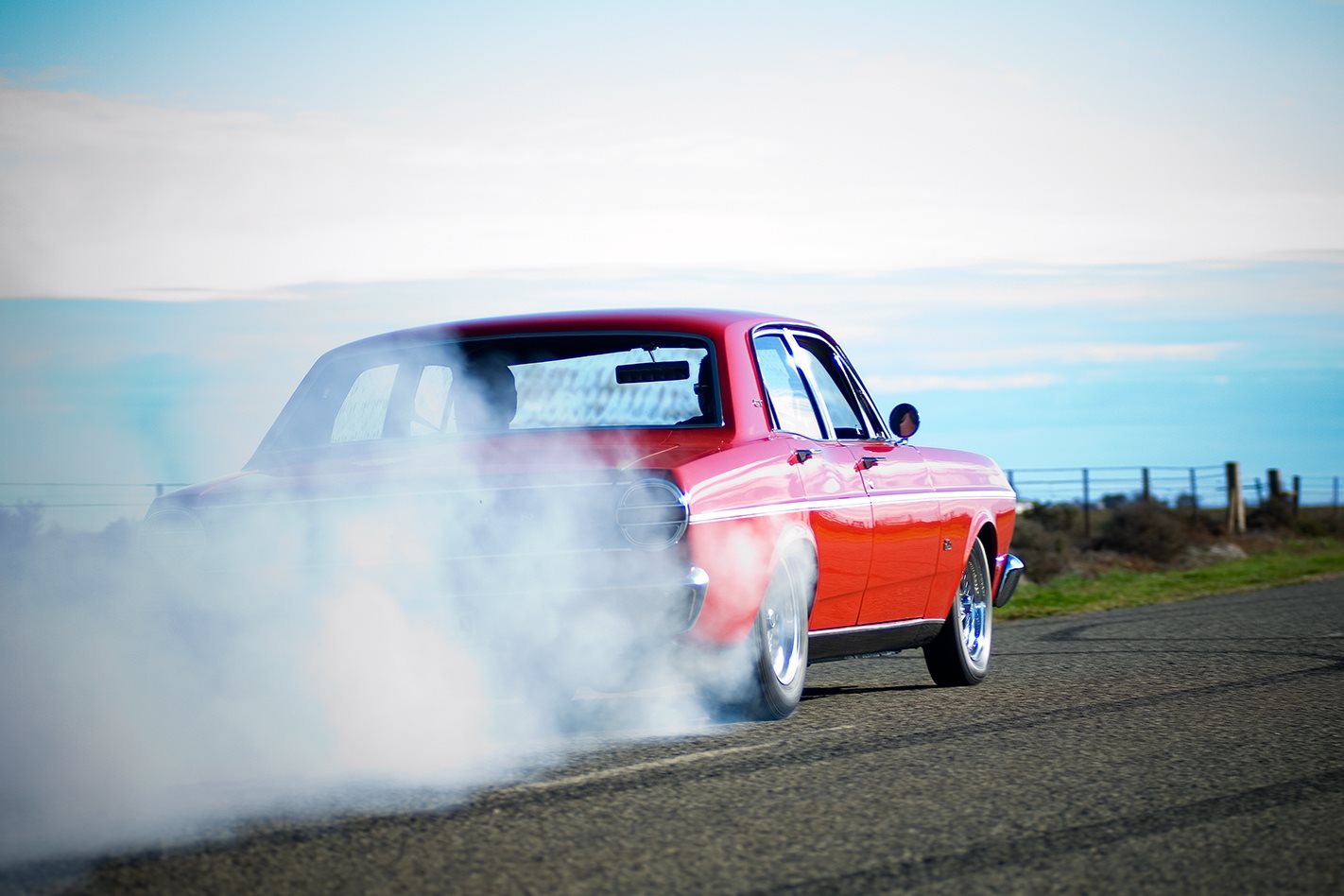 “I never had the figures done, but it was a pretty wild motor,” he says.

“I reckon it had about 400 to 450hp at the crank.” The demise of readily available Avgas meant a switch to pump fuel, however, and a set of trick aluminium heads were purchased for the 289, but the trend at that time was to move up in cubes, so a 351 was enlisted.

“Everyone was going up so you could have lower compression for pump fuel and still get the same kinda power,” Tom says. 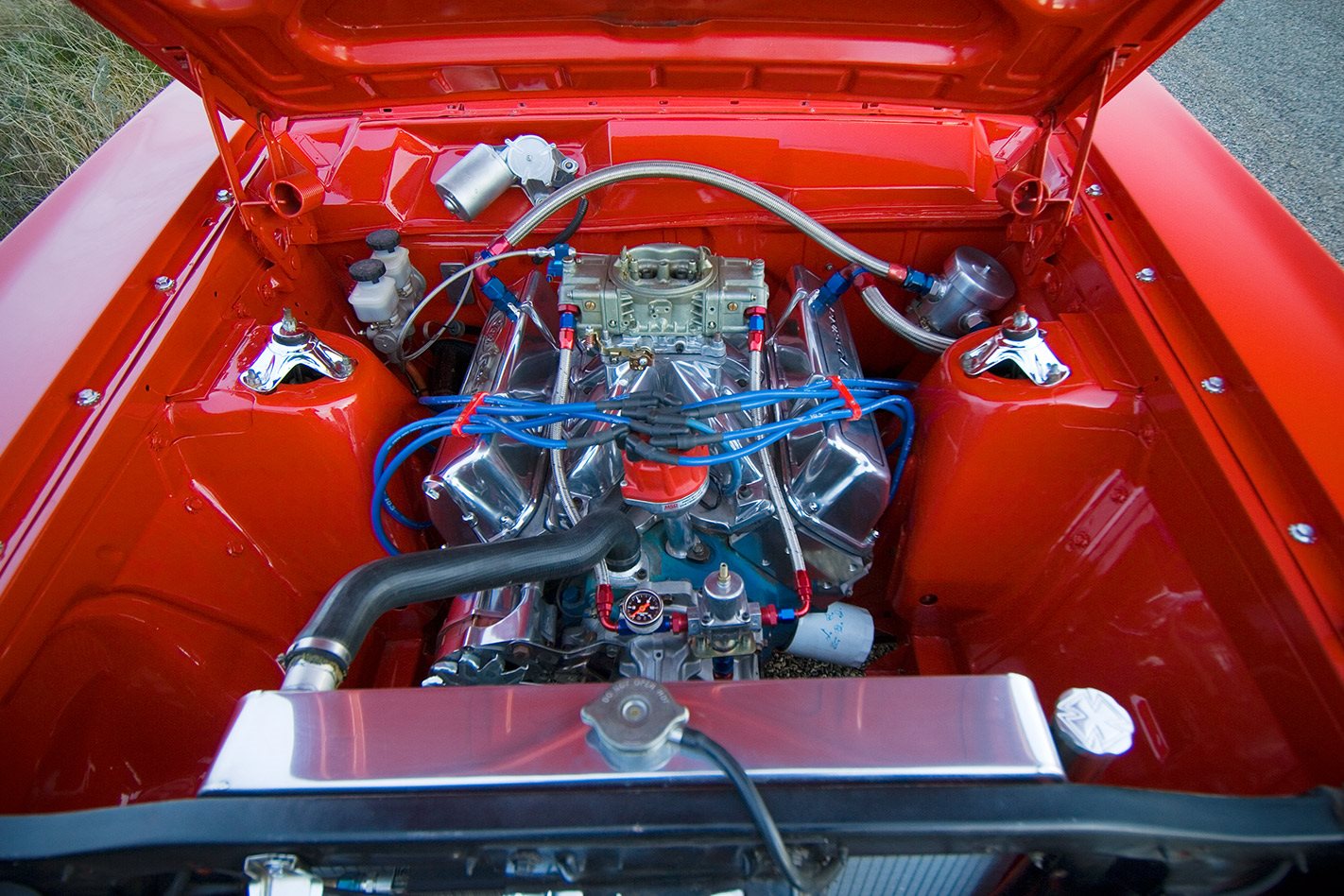 An Eagle stroker kit helps make this a torque monster that also loves a rev, easily pulling eight grand where it will hit an estimated 650hp

The standard-bore 351 Cleveland four-bolt block, fitted with four-bolt Milodon caps for strength, needed to be relieved for adequate clearance for the large four-inch stroke Eagle 4340 steel crank. It was then sonic tested to gauge bore thickness, crack tested, tunnel bored and balanced before the Eagle stroker kit was installed and the engine reassembled with Venolia forged pistons and rings, King bearings, Eagle H-beam rods, ARP pushrods, a custom cam from the US and Harland Sharp roller rockers.

The aluminium Air Flow Dynamics 2V heads from the 289 were retained, and a big Holley 950 and match-ported Funnel Web manifold were installed. Tom picked up plenty of the other bits on a trip to the US, where he visited Chet Herbert cams in California to source a specific cam after Tom supplied details such as the car’s weight, planned use and engine componentry. 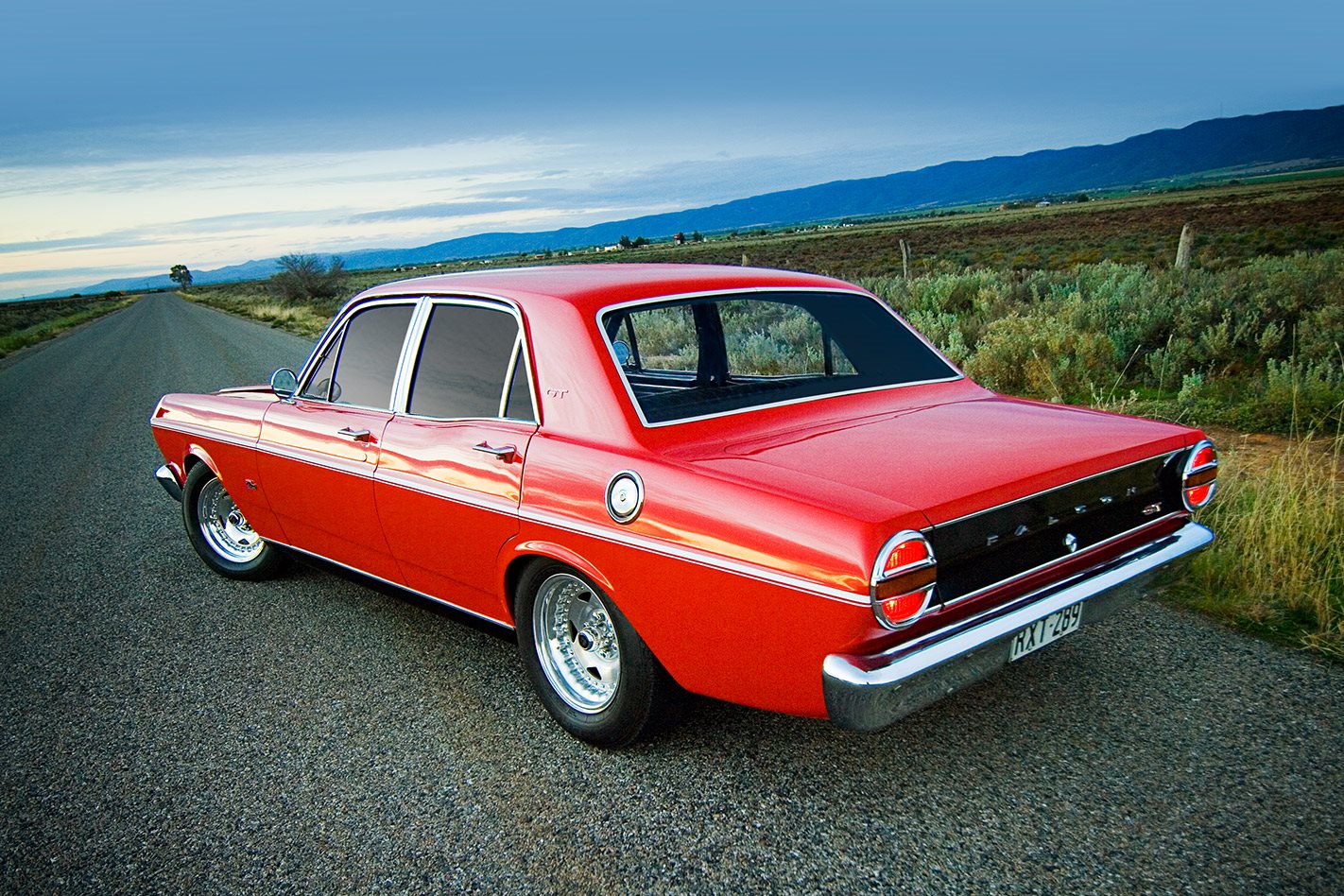 One of his other specifications was to have a killer engine bay and he employed his own auto electrician skills (he runs Pro Auto Electrical) to hide the wiring. He tucked the cabling behind the guards, while ignition parts such as the MSD coil, were hidden under the dash. Cousin Glen applied coats of Salamanca Red paint, after filling the 68 holes left by the rewiring and plumbing, and the motor was then put back in place. Very carefully.

The big Cleveland with the aluminium heads was a tight fit, and three sets of extractors were trialled before one was modified to provide enough clearance. That final component has helped the 408ci stoker hit an estimated 650 horsepower, and it has genuine driveability, with strong torque down low thanks to well-matched cam and carby. 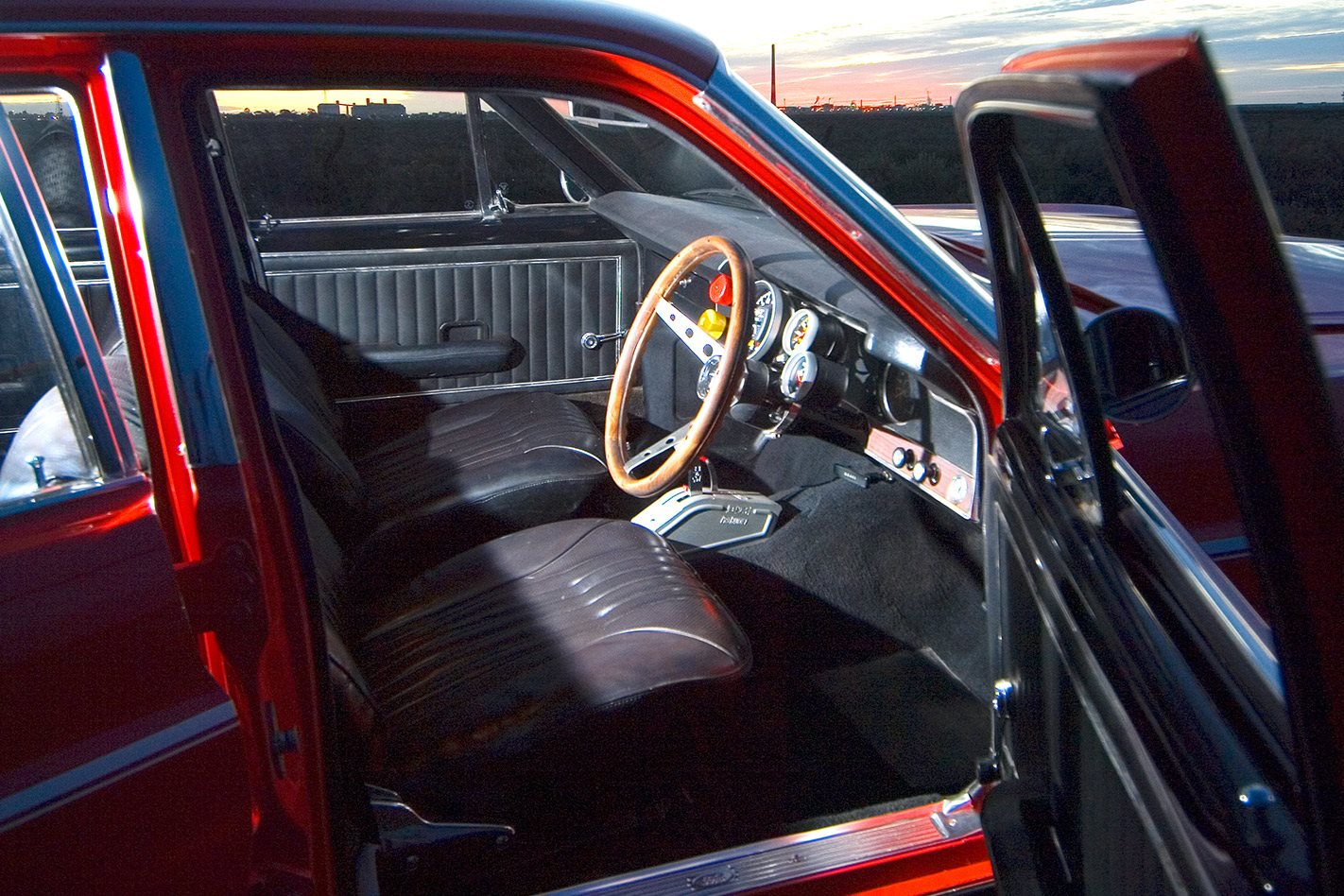 The interior was like the rest of the car – perfect. Tom’s added a new rooflining, retained the original dash and added Autometer tacho and Mustang tiller. Behind the dash, Tom’s removed the heater plumbing to make way for cabling from the engine bay

“The biggest thing was going to the auto,” says Tom. He swapped out the manual in favour of a C4 auto with full manual shift kit and 4000 stall. “It makes it much easier for burnouts and launches.”

The effortless torque has a lot to do with that as well, but that doesn’t mean an ugly top end. “It’s a stroker with excellent response,” Tom says. “The moment you push the throttle, it’s up straight away. That said, a couple of times I’ve looked down and surprised myself to see the tacho over 8000rpm. I don’t want to do that too often, but it gets there so easy!”

The ’68 rear-end, which still sports the standard leaf springs, means the XT will easily smoke the treads in top gear at 80km/h. “That’s a fair problem. When it spins up, it doesn’t like to go straight with the shaft twist,” Tom says. 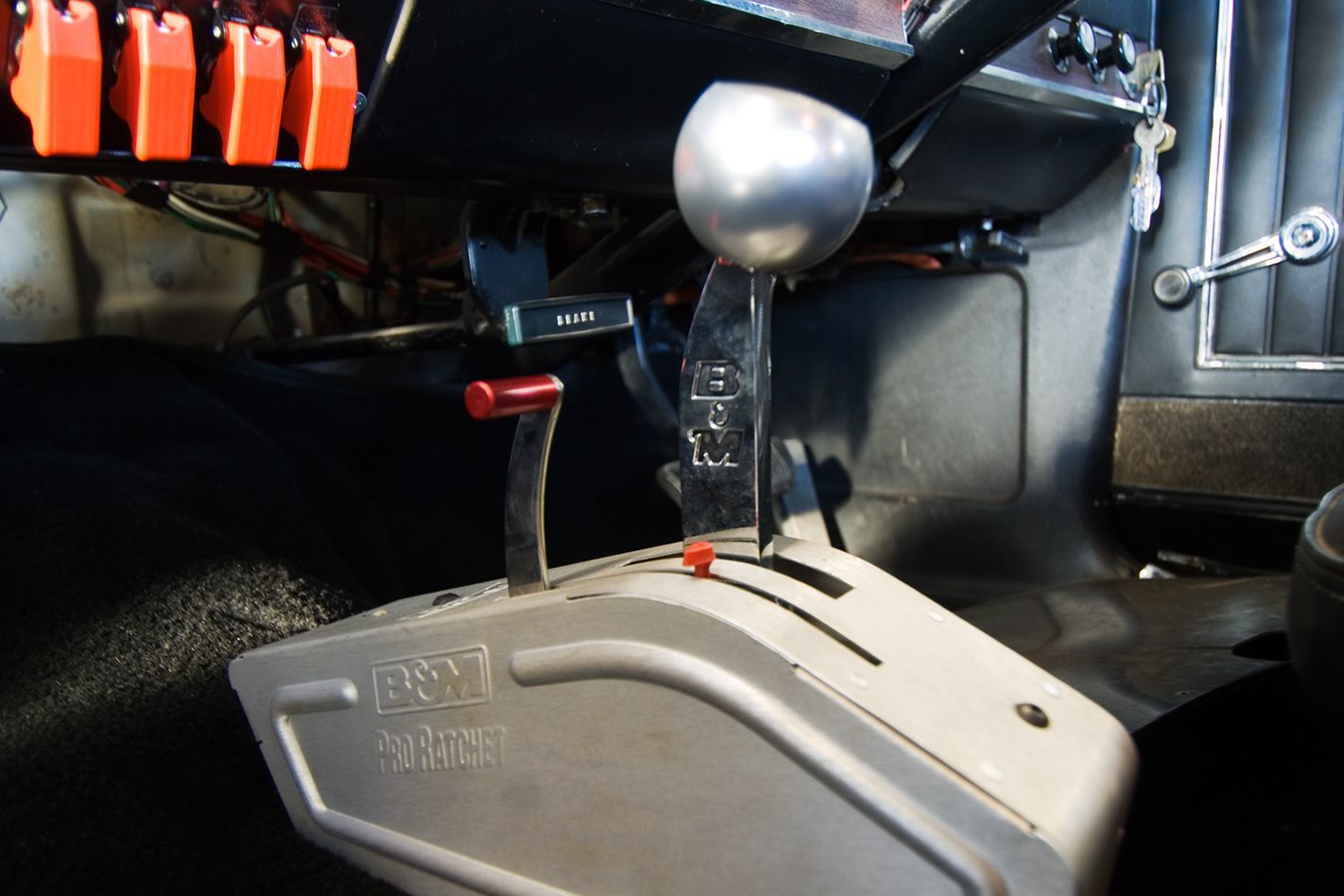 To solve the issue he’s planning to stiffen up the rear with billet axles and two-link bars to support the nine-inch diff (with Trac-Loc centre and 3.9 gears) that’s driven by a three-inch heavy-walled tailshaft.

Covering the XY vented discs up front and standard rear drums are a set of 15x4 and 15x8.5 Convo Pros, finishing off the big Falcon’s neat exterior, without revealing the full force of its potential. That potential is something Tom is keen to explore on the racetrack after sorting the rear-end and with a set of race slicks borrowed from a friend. “I want to see how it goes down the quarter-mile,” he says. “On paper we should get low 11s out of it, but there a lot of things that need to come together to get that.”