When your number's up, why not cruise off this mortal coil in style?

AS WELL as being a sad occasion, a funeral serves as a celebration of someone’s life – so why shouldn’t you get in on the action when it’s your time to go? I mean, why spend a lifetime cruising in style only to drop the ball when you cruise off this mortal coil? When it comes to my final ride, I sure as hell would choose the riotous impact of deep black paint and six grumbling exhausts over sleepy white serenity any day, and what better way to leave this world on a high than with Hot Rod Funerals. 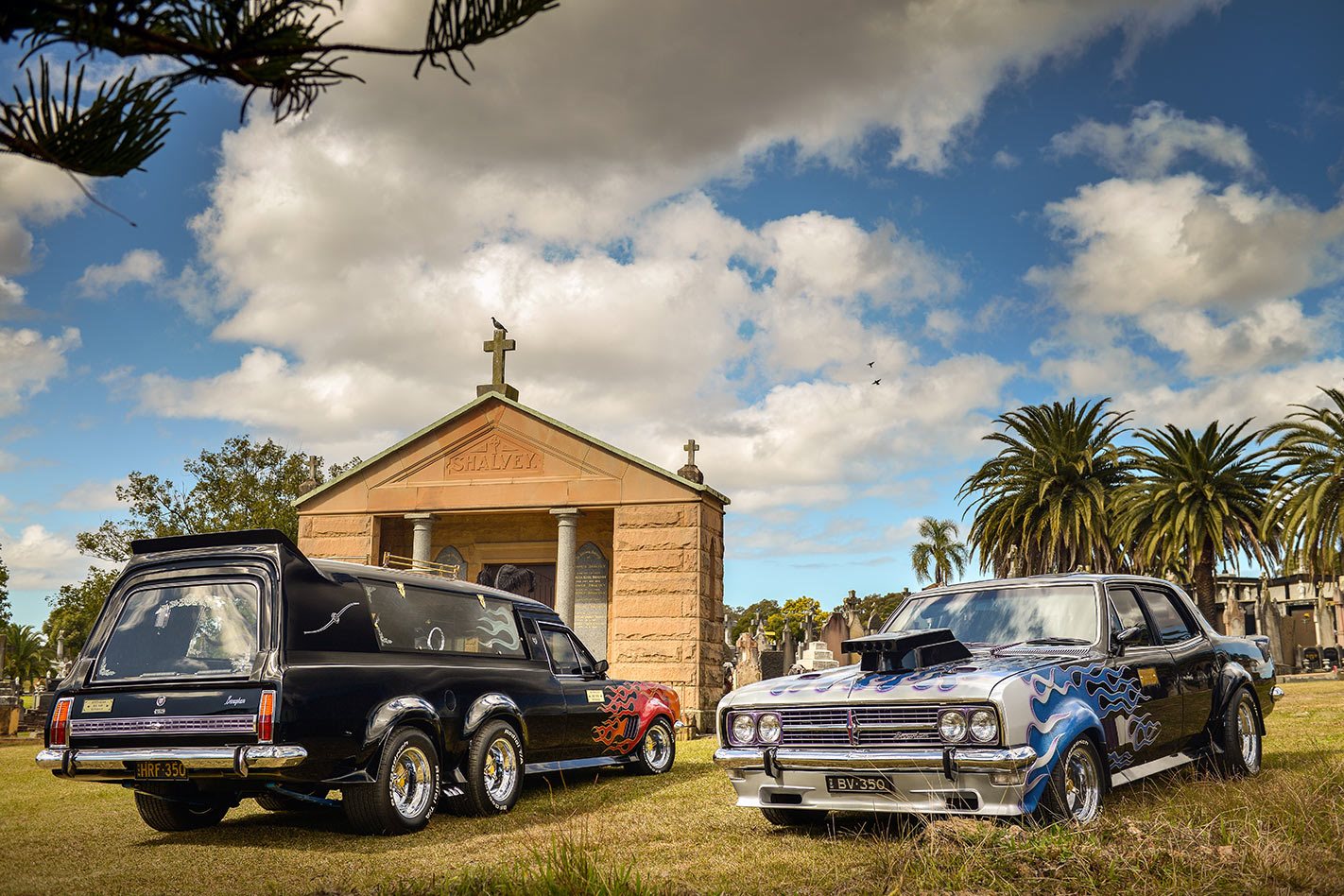 Bruce built both cars to be as identical as possible, so they share many of the same components and styling cues, right down to the Brougham exterior trim and extensive use of purple detailing

Owner Bruce Varley is a car guy to the core, and toyed with this business concept for a number of years: “It’s been nearly two decades since I came up with the idea for a funeral service specifically targeted at car enthusiasts,” he says. “The end product took a lot longer than anticipated, but I can finally see the light!” 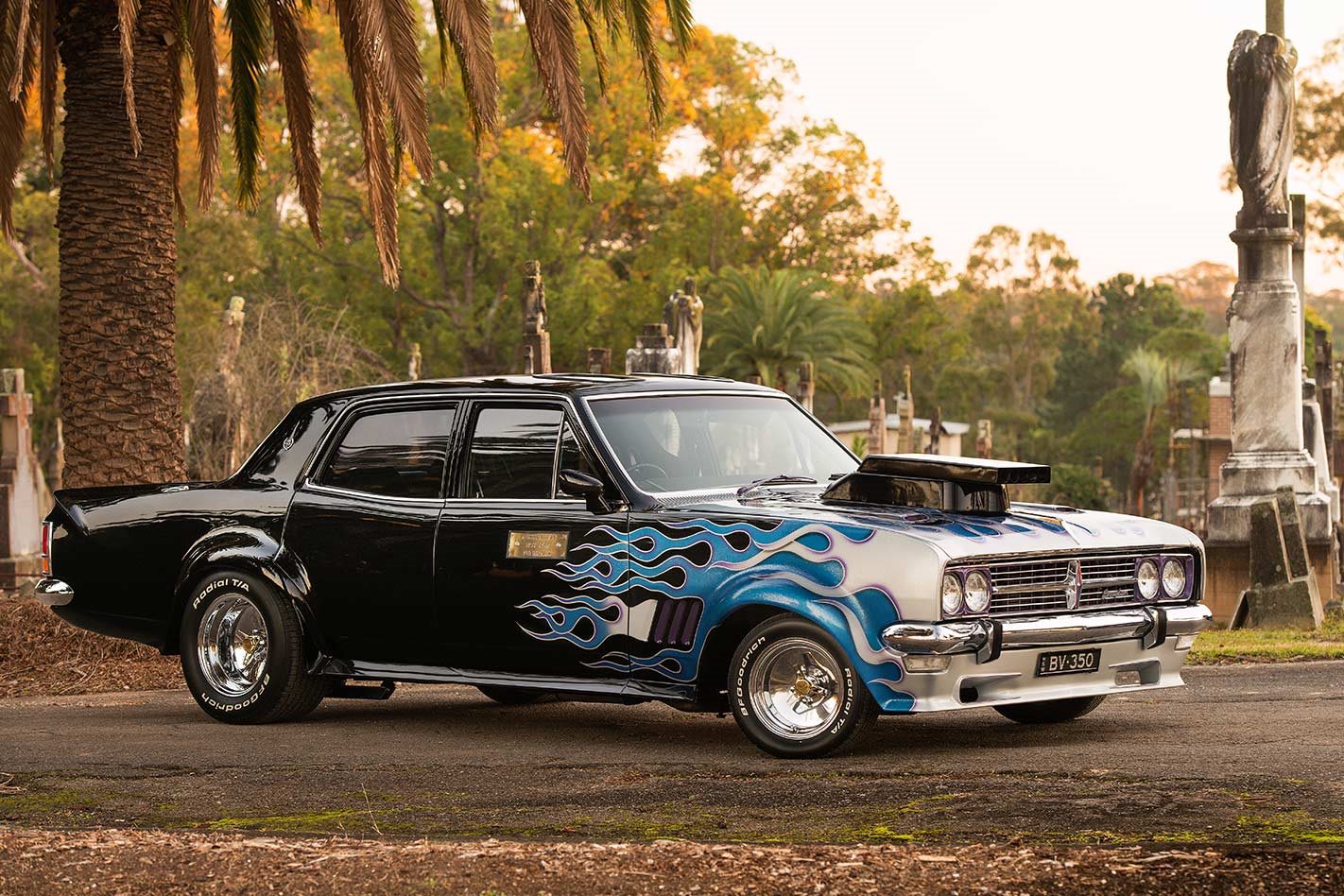 If you think these Holdens ooze a typically 70s and 80s custom flavour, then congratulations on failing the restorers’ test. Not only is this style Bruce’s forte, but both cars have been in his possession since the 1970s, so are a legitimate time-warp from that bygone era. 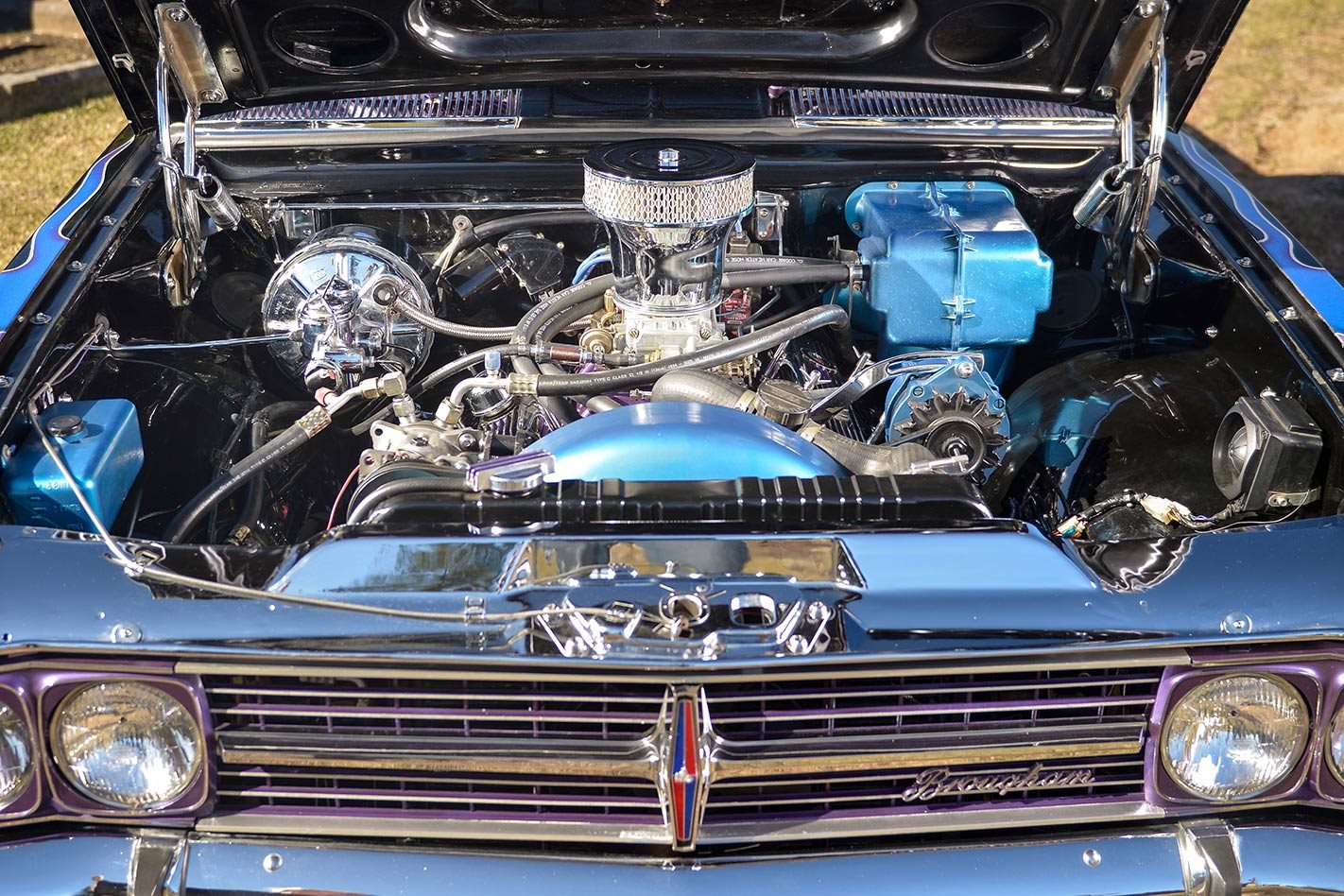 “I bought the Brougham sedan back in ’76, and man it was rough,” Bruce says. “I replaced the rusty doors, fitted the GTS guards and bonnet, then used it as a second car for many years. In 1983 it was time to get serious, so my mate Tony Hughes and I designed and built an extensive bodykit using a mix of fibreglass and steel.” 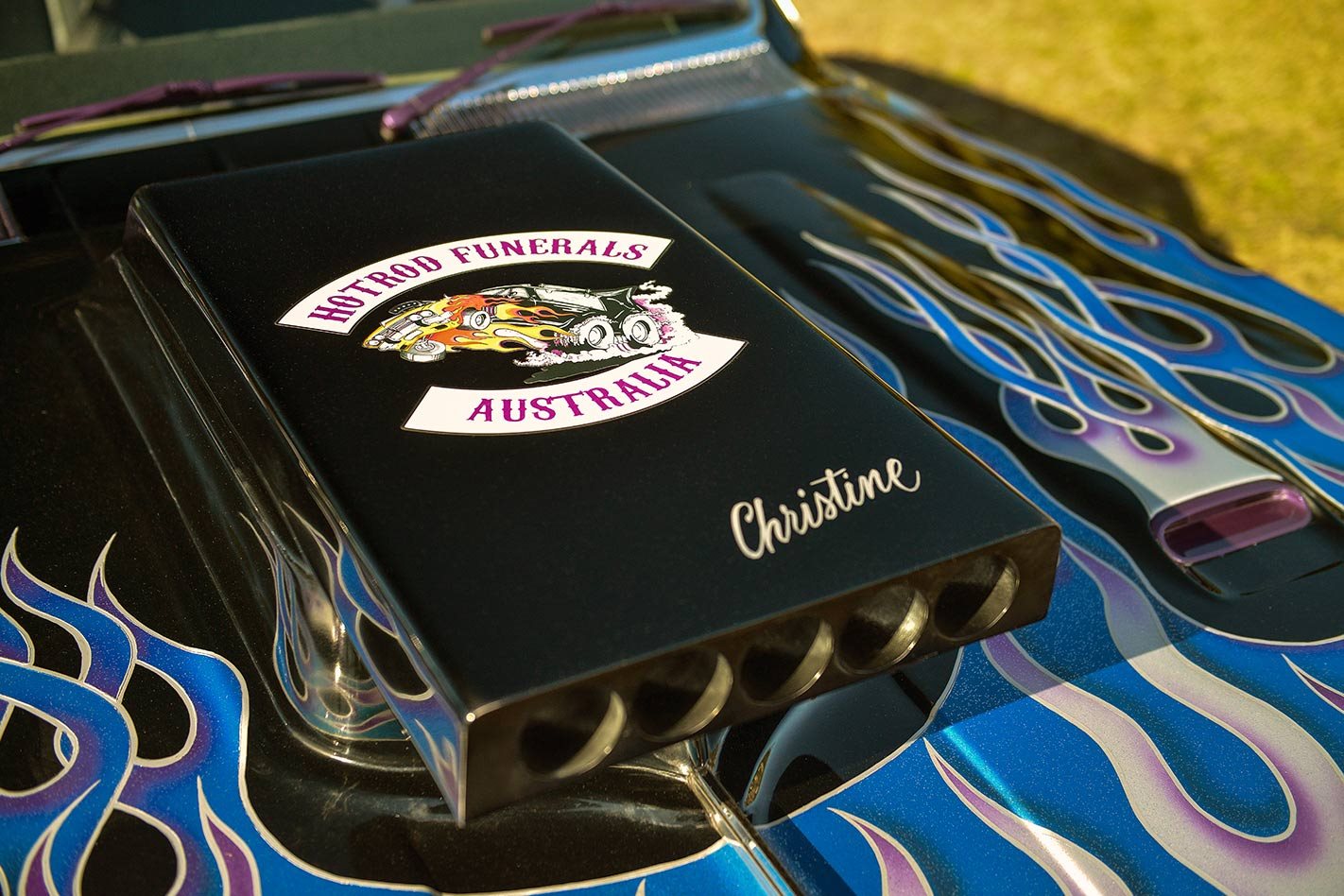 The door handles were shaved and twin Jag fuel fillers added, before Bruce’s mate Pommy Dave laid down multiple coats of Dulon Midnight Black acrylic – this was the 1980s, remember. “I totally ran out of money and time so the car sat there unfinished for years,” Bruce explains. “The paint wasn’t cut back and buffed until 1999!” 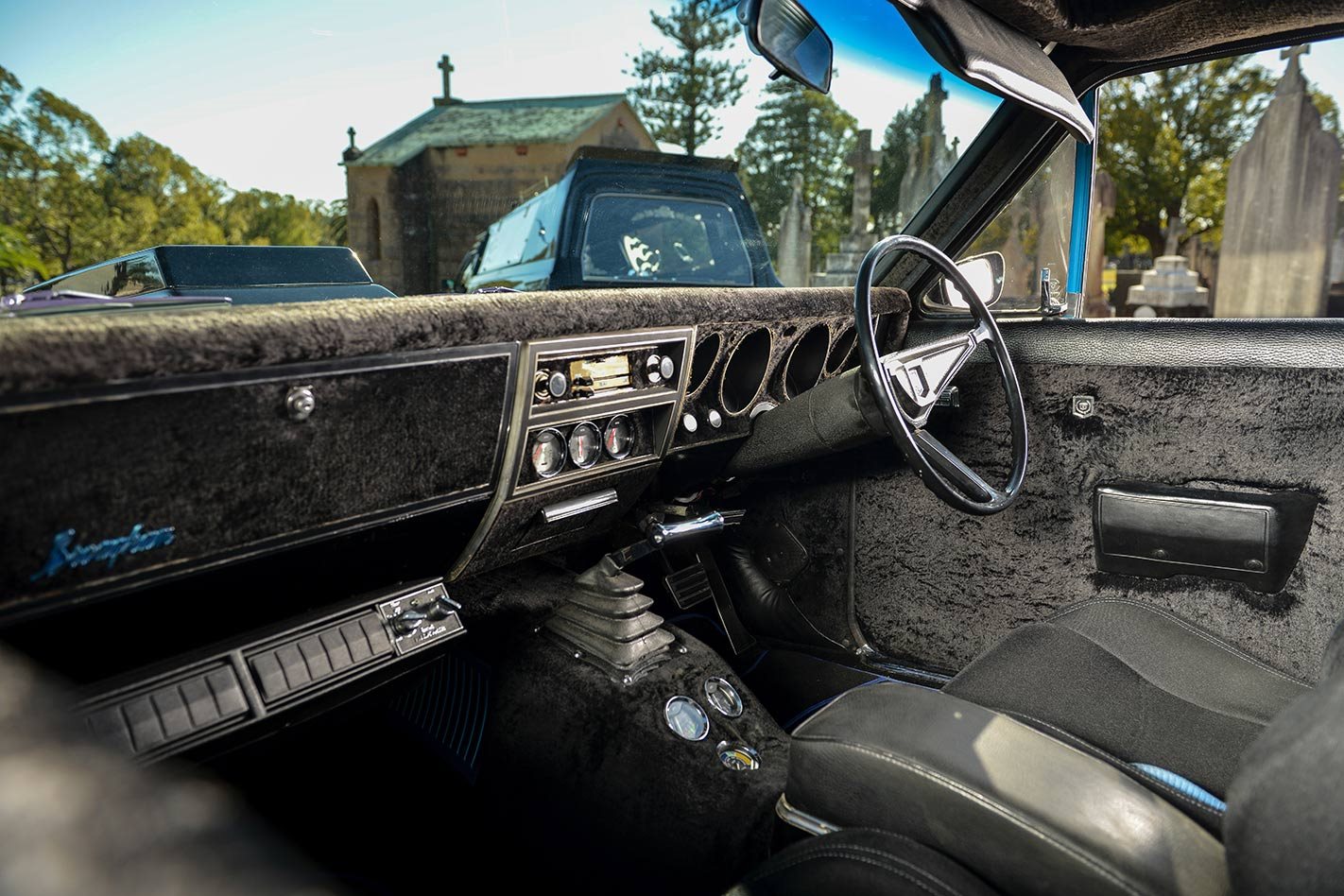 A 350 Chev replaced the factory 307, still mated to the original Powerglide and Salisbury diff, with the stock brakes rebuilt and suspension tweaked to include the obligatory lowering job and chrome tramp rods. 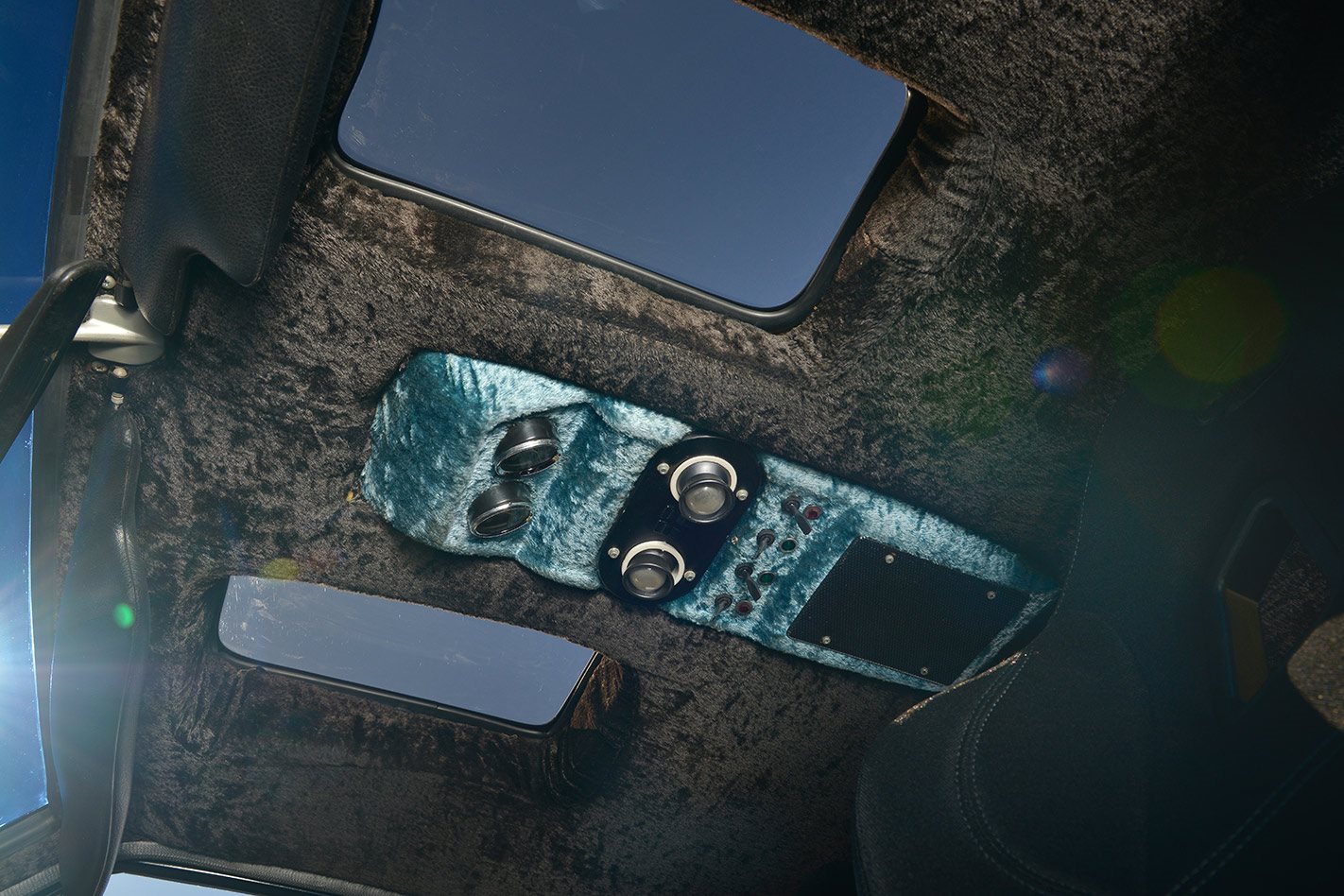 Bruce completed a small business qualification in the late 90s, and the Brougham would spend the next 15 years earning its keep as a wedding and formal car, its rich black paint and original single-layer flame job making it a stand-out ride. But there was still that itch that he needed to scratch – the dream to create a fleet of funeral-spec cars that offered a very specific experience. So as soon as the Brougham was up and running, Bruce set to work on a stablemate that would be a cool 16 years in the making. 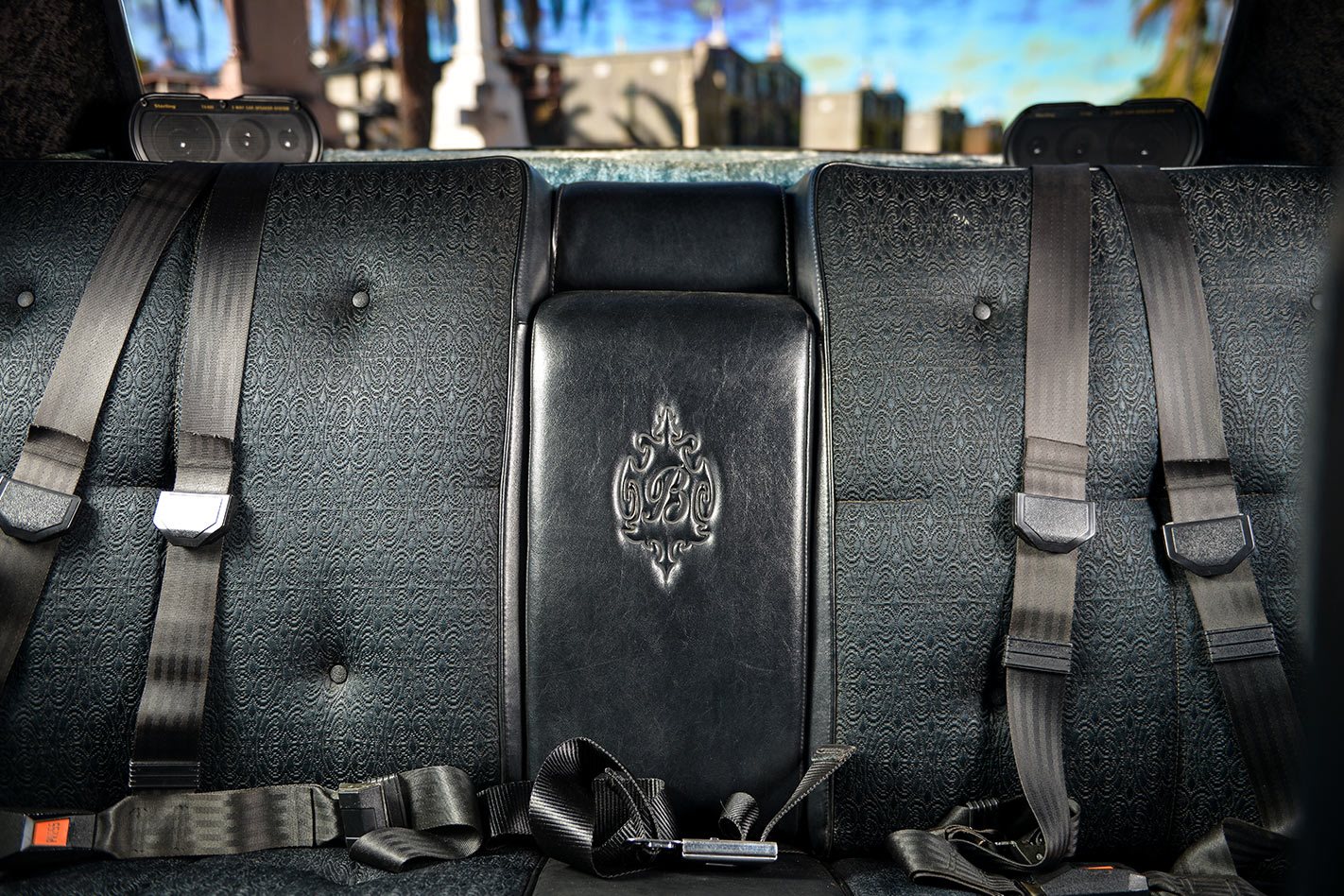 “I had a Holden panel van that I’d owned since 1972,” he says. “Back then every 17-year-old had to have a van, so I bought a stolen and stripped HT from the auctions and spent the next few years piecing it together.

It went from a pov-pack, damaged 161 Belmont to a 350 Chev-powered hottie with GTS guards and bonnet, bubble windows and flared guards. It was my daily driver for years.” 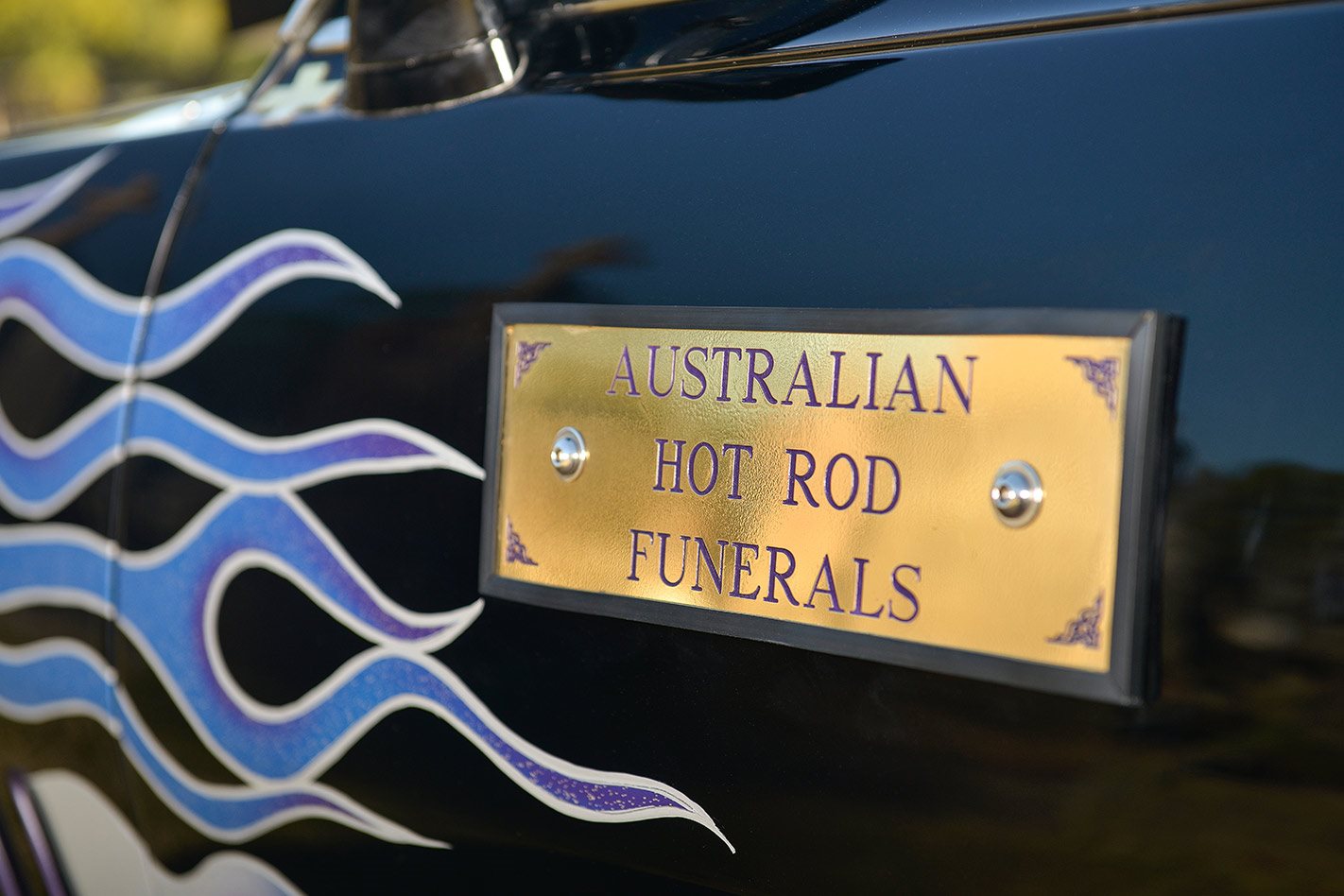 Transforming the van into a hearse meant that extra, er, leg room was required, so a donor HK panel van was purchased to help create a long-wheelbase six-wheeler to provide both ample coffin space and serious in-yer-face impact.

“I cut the HK first for a practice run, then wheeled the HT into the shed. It was a nerve-wracking experience, and with grinder in hand I could only mutter: ‘Here goes nothing!’” Bruce laughs. 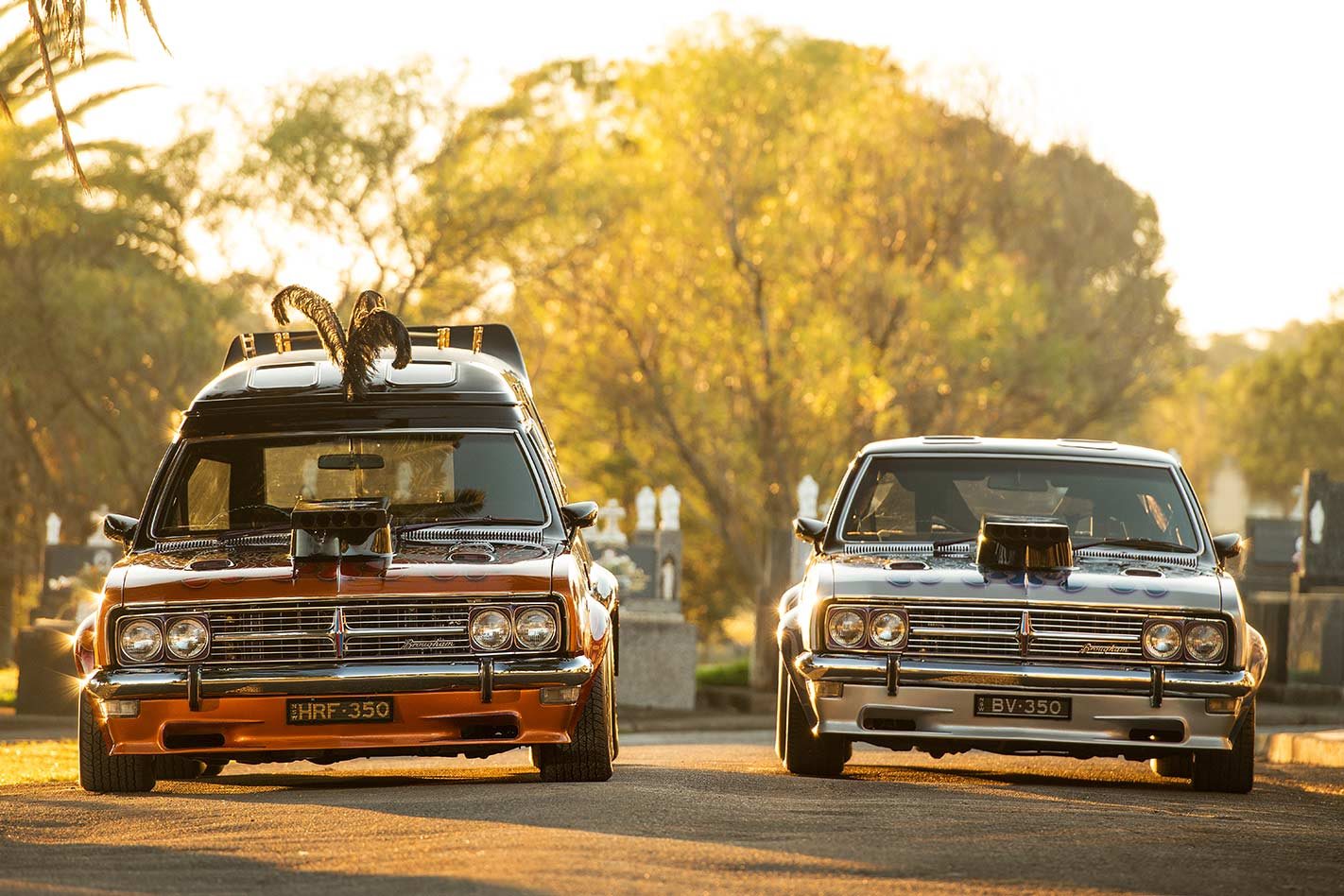 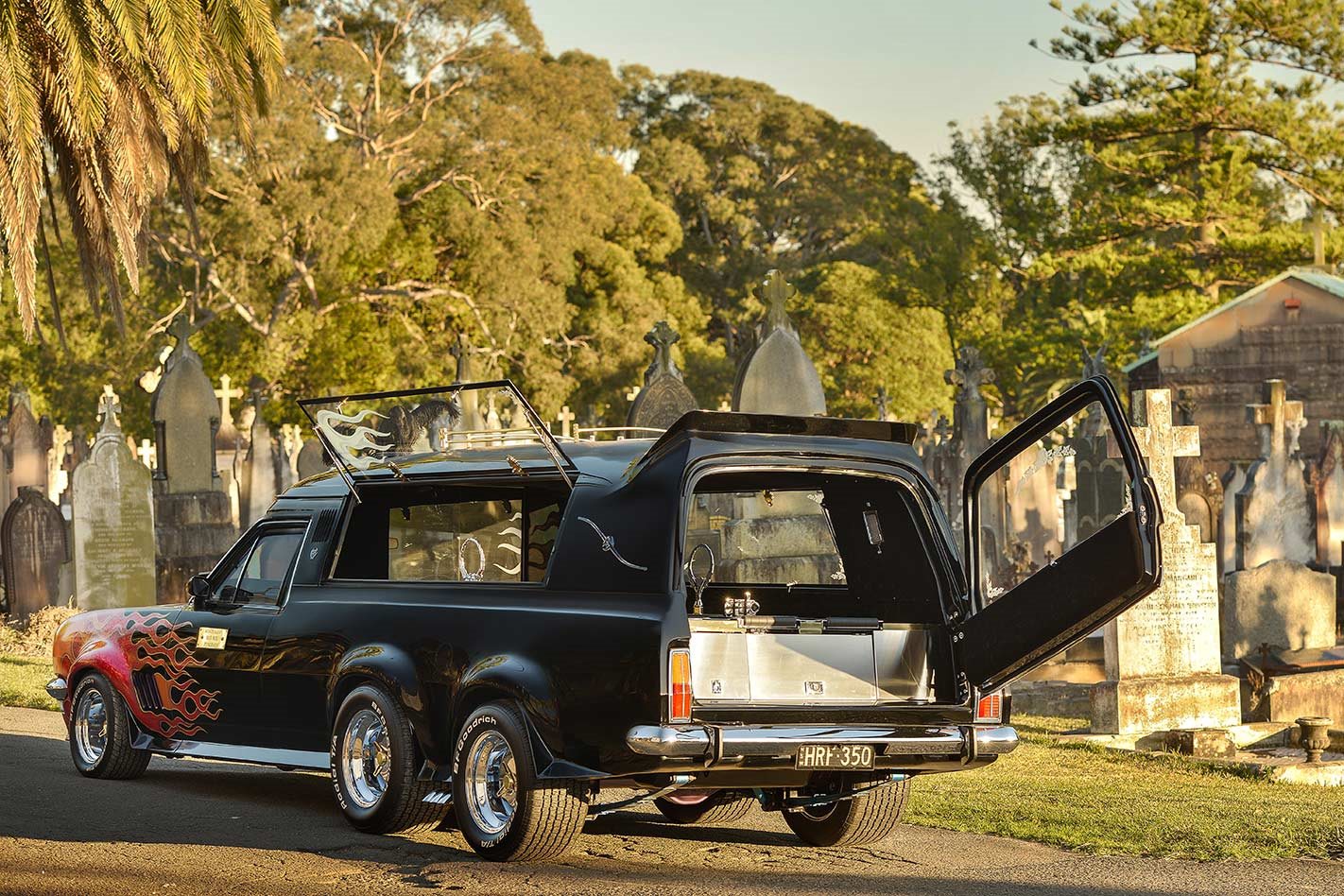 Six-foot-long custom side glass swings out gullwing-style, and has been properly sand-etched with a mix of traditional and hot rod-influenced designs

The stretch alone would be enough to test the skills of many, but Bruce was only warming up. “I needed the van to look and function like a legitimate hearse, so I got stuck into adding half-doors to the bottom of both sides and built an adjacent storage space.” Sedan rear doors were cut down to suit, sedan B-pillars were adapted to provide a hinge point and modified sedan door jambs were added to latch and seal these custom doors. “It was actually a much bigger job than the body stretch, believe it or not, but I had to persist as it was crucial to the overall hearse concept,” he explains. 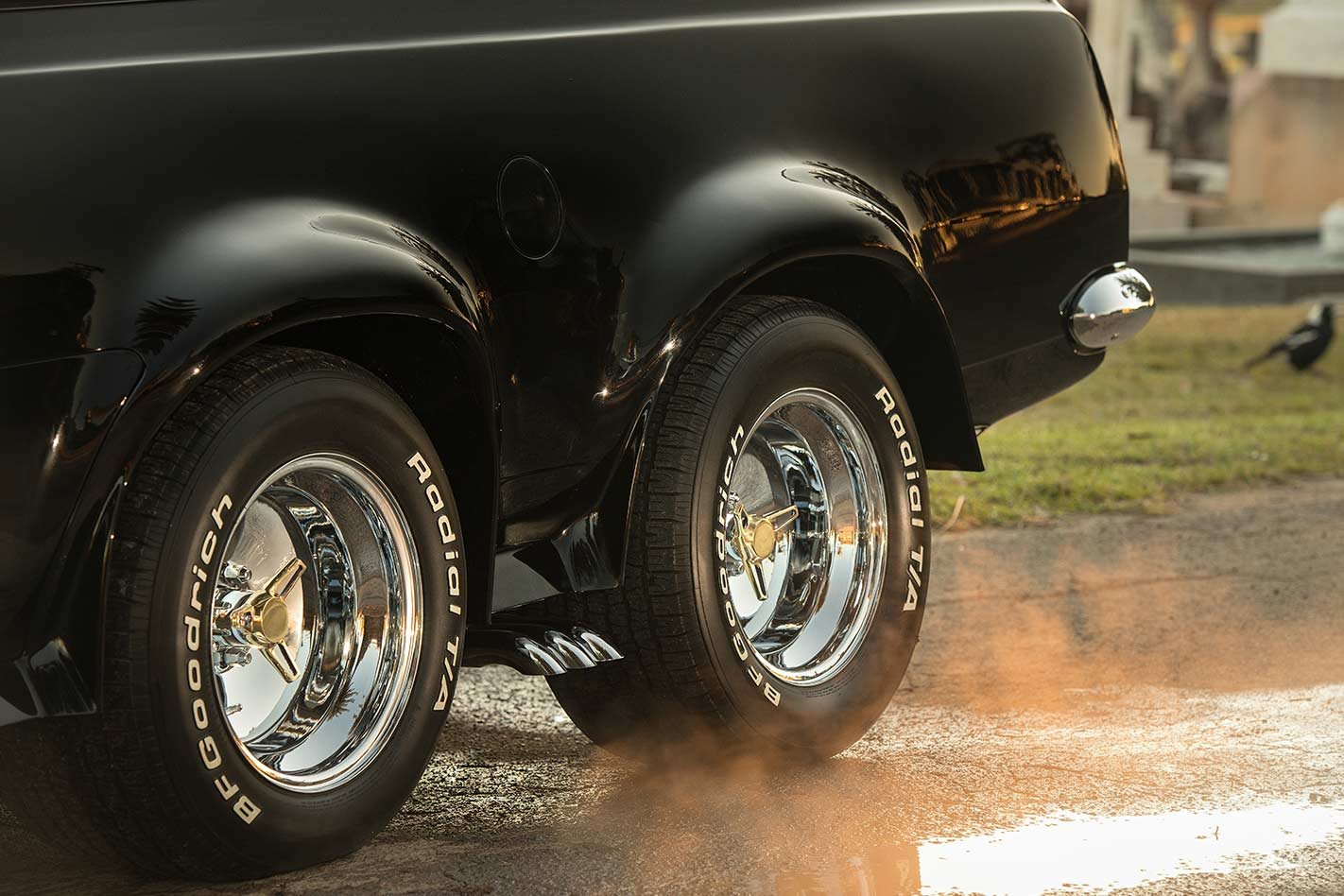 Bruce decided early on that the cars had to match each other as closely as possible, so he began by replicating the Brougham’s bodykit for the hearse, adding an extra 20 pieces to compensate for variations in size and shape. A one-piece swinging tailgate was fabricated and the side panelling modified for the fitment of six-foot gullwing-style windows, allowing easy access to the coffin deck for trouble-free transfer. 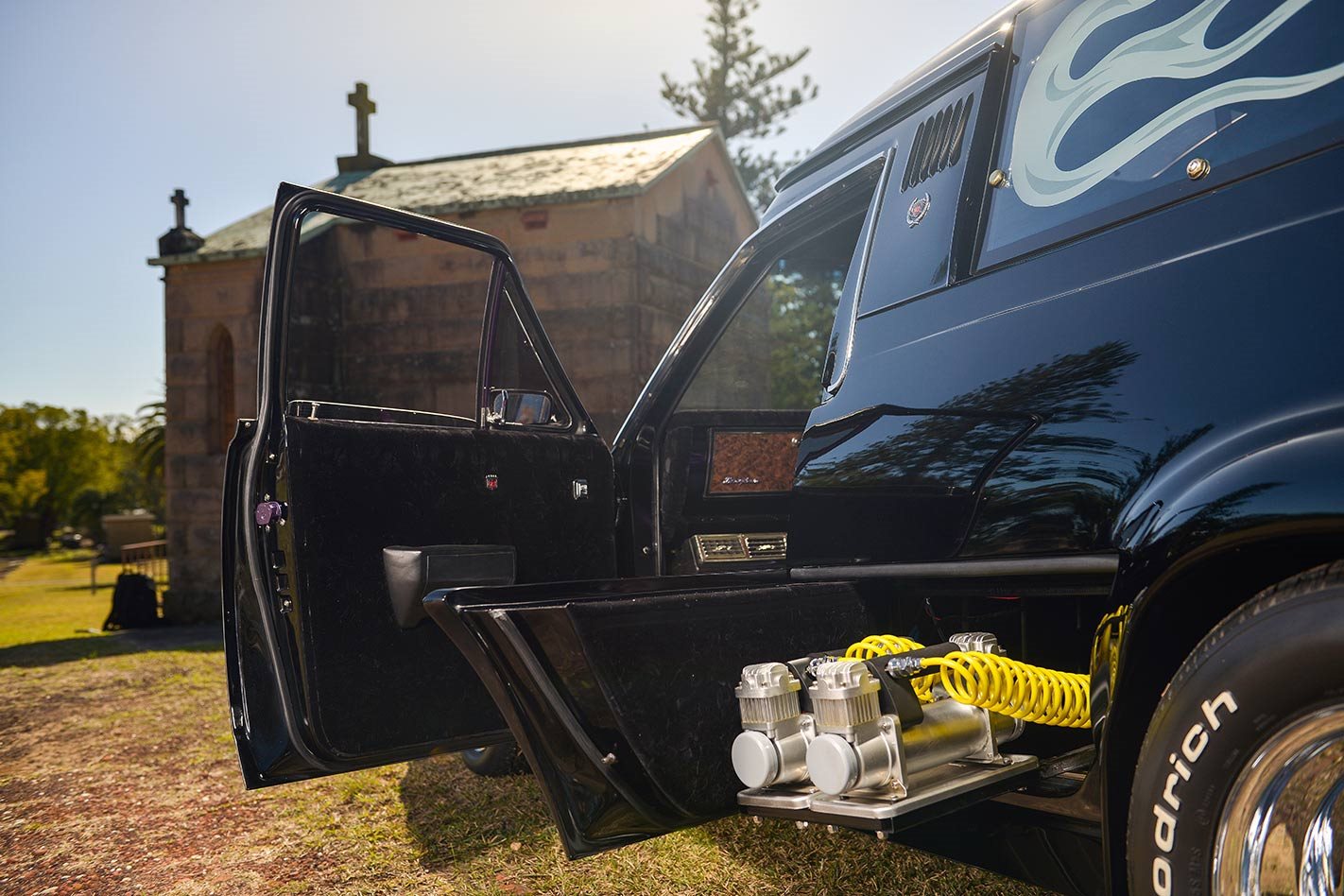 Half-doors were fitted as part of Bruce’s quest to transform the HT van into a legitimate hearse: “It was a massive job that was even more involved than doing the body stretch,” he recalls. The additional storage space was created to house the compressors for the rear air shock absorbers and working equipment used for coffin transfer

The deck fittings were sourced from Canadian hearse supplier DNR Industries, and from a specialist hearse wreckers based in the US – yep, only in the States.

As a toolmaker by trade, creating the solid brass work was a cinch for Bruce; he made the hinges, roof racks, door plaques and cast wheel spinners before polishing and clear-coating each piece to ensure a permanent shine. 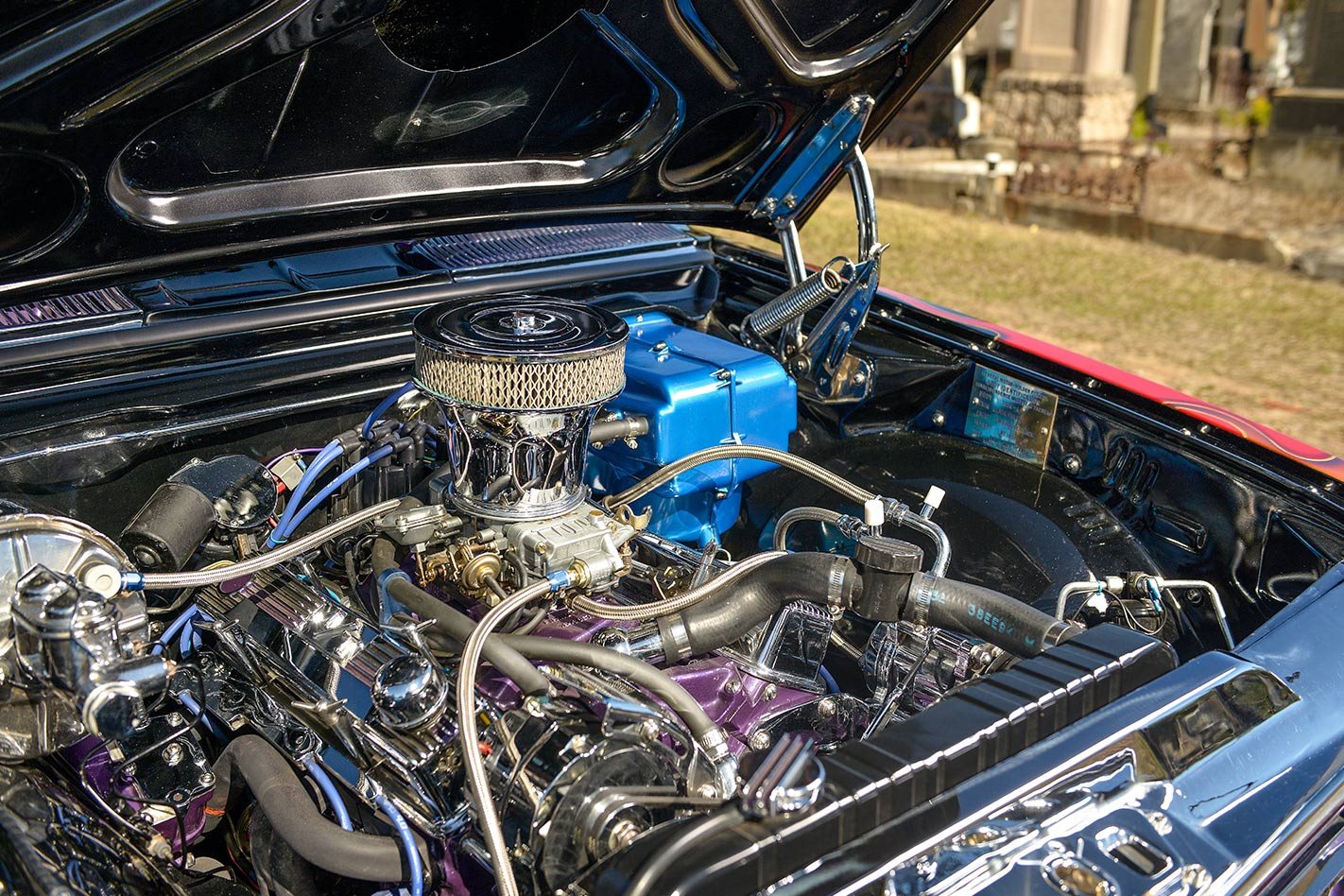 In both cars, 350ci small-block Chev crate motors, good for 290hp, were chosen for their simplicity, ample performance and reliability. Both are nestled in extensively detailed engine bays. Genie extractors and twin 2in exhaust systems provide ample V8 burble without being obnoxious

With the vast amount of fabrication and body mods completed, jack-of-all-trades Bruce laid down the spray putty and primer coats before Pete D’Aguar sprayed on umpteen litres of glorious black acrylic. Pete then teamed up with artists Jamie Goodhew and Alan Smith to create the dual-layer flames in red and gold. Chrome Pro Stock rims were fitted to match the sedan’s rolling stock, with an extra pair of 15s nestled under the rear. 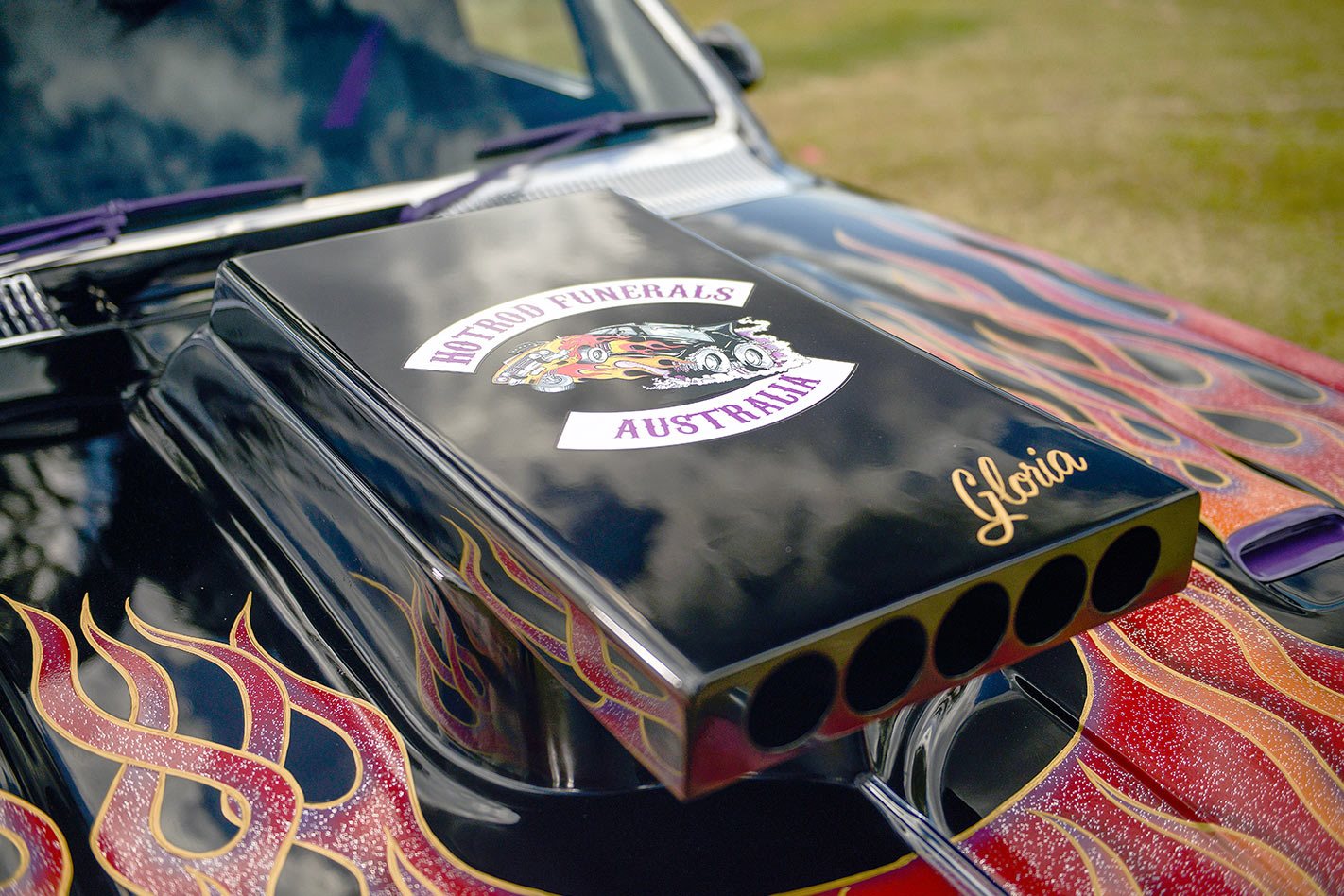 By the time the hearse was finally nearing completion after 16 years, Bruce realised the Brougham was showing its age from use over the same period, so he set out to ensure that both cars were unveiled together in pristine condition.

Glen from A&J Smash Repairs freshened the sedan’s black paint before matching flames were added, differing from the hearse’s paint scheme only in the choice of silver and blue hues. 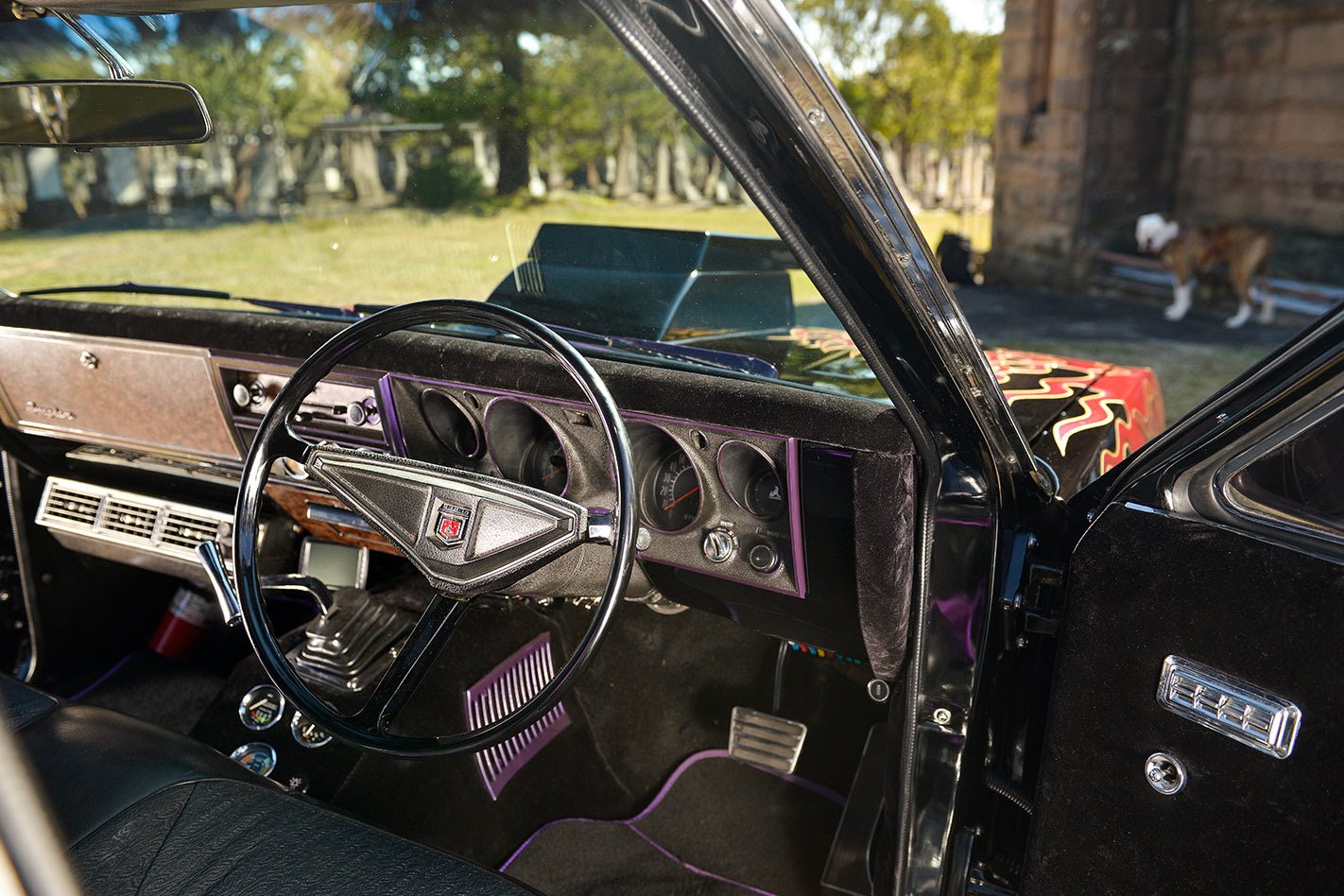 Vehicle reliability and comfort are paramount in the funeral industry, so Bruce chose to install fresh 290hp 350 Chev crate motors and rebuilt Powerglide transmissions in both vehicles, with air conditioning and power steering included for good measure.

SAAS bucket seats replaced the original Brougham front bench, which was instead fitted to the hearse, and the interior surfaces of both cars were retrimmed in black crushed velvet by Bruce and Mascot Motor Trimmers. 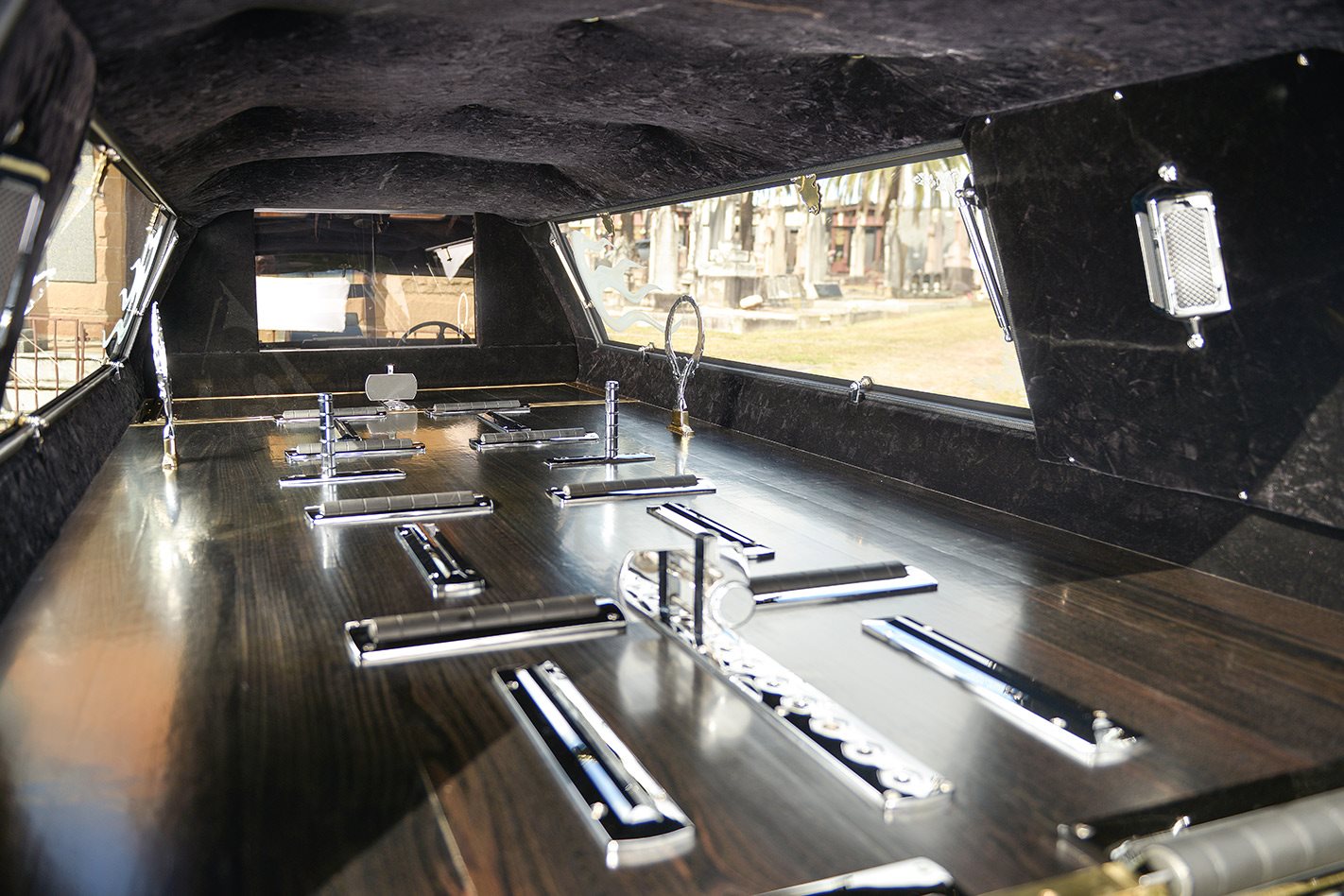 Proper hearse rollers and hardware were sourced from the US and Canada, with Bruce going to great pains to thoroughly research and detail the inner coffin deck

In both cars, the stock dash fascia along with custom floor and overhead consoles house a mix of Monaro, Brougham and Smiths gauges, complemented by a Brougham tiller and Hurst shifter.

“Sixteen years is a long time for any project,” Bruce admits, “but that’s what happens when you try and do everything yourself. At the end of the day I owed it to my old van to get it back on the road, and also to myself to make that 20-year dream a reality.” 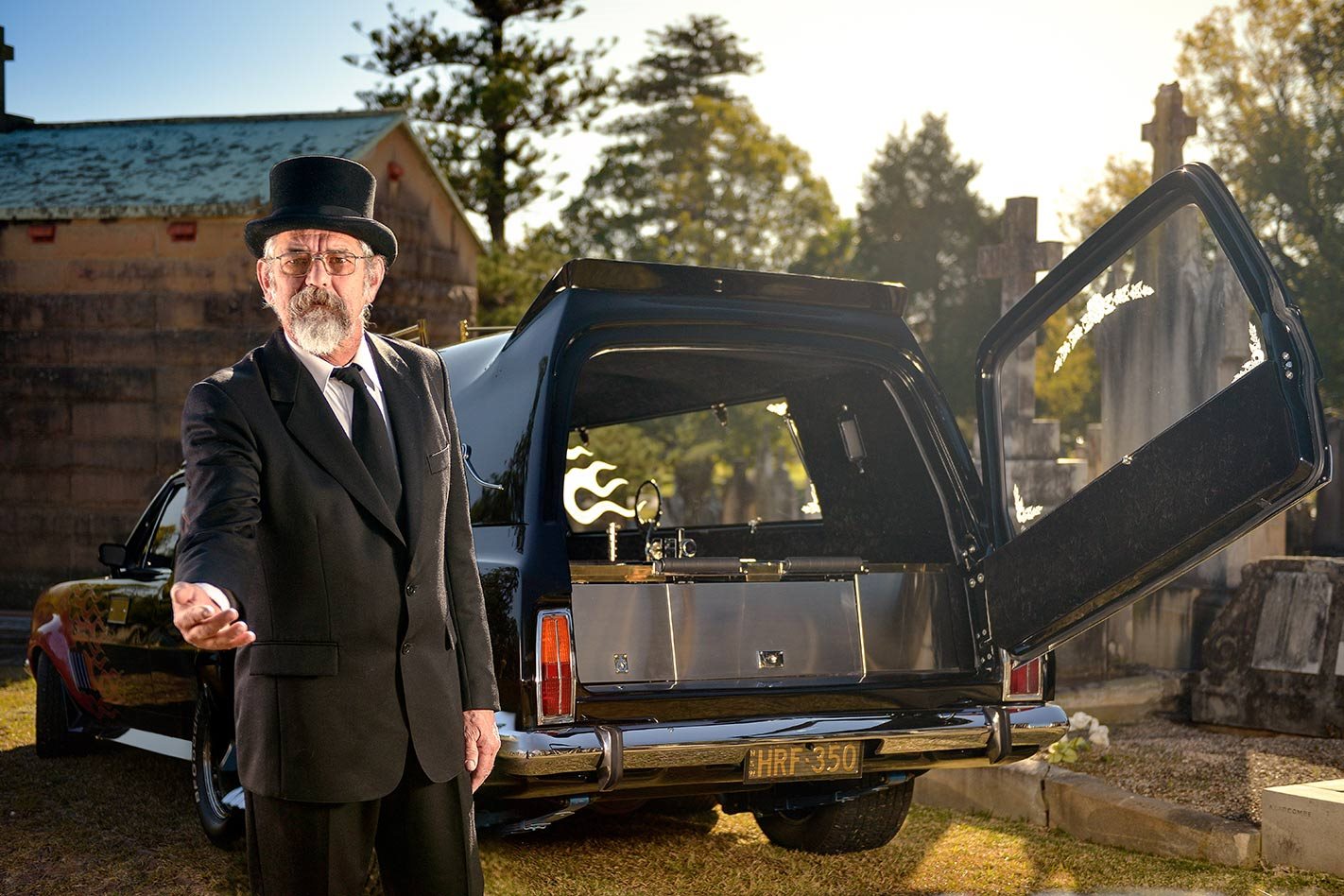 Hot Rod Funerals finally came to fruition in 2015, with Bruce and his team quickly earning a reputation in the greater Sydney area for professionalism and the ability to provide a unique experience. Check out hotrodfunerals.com.au for more information or keep an eye out for Bruce and these Holdens at many local shows; he remains a hot car enthusiast first and foremost, so you can rest assured that your loved one’s last wild ride will be in safe and understanding hands. 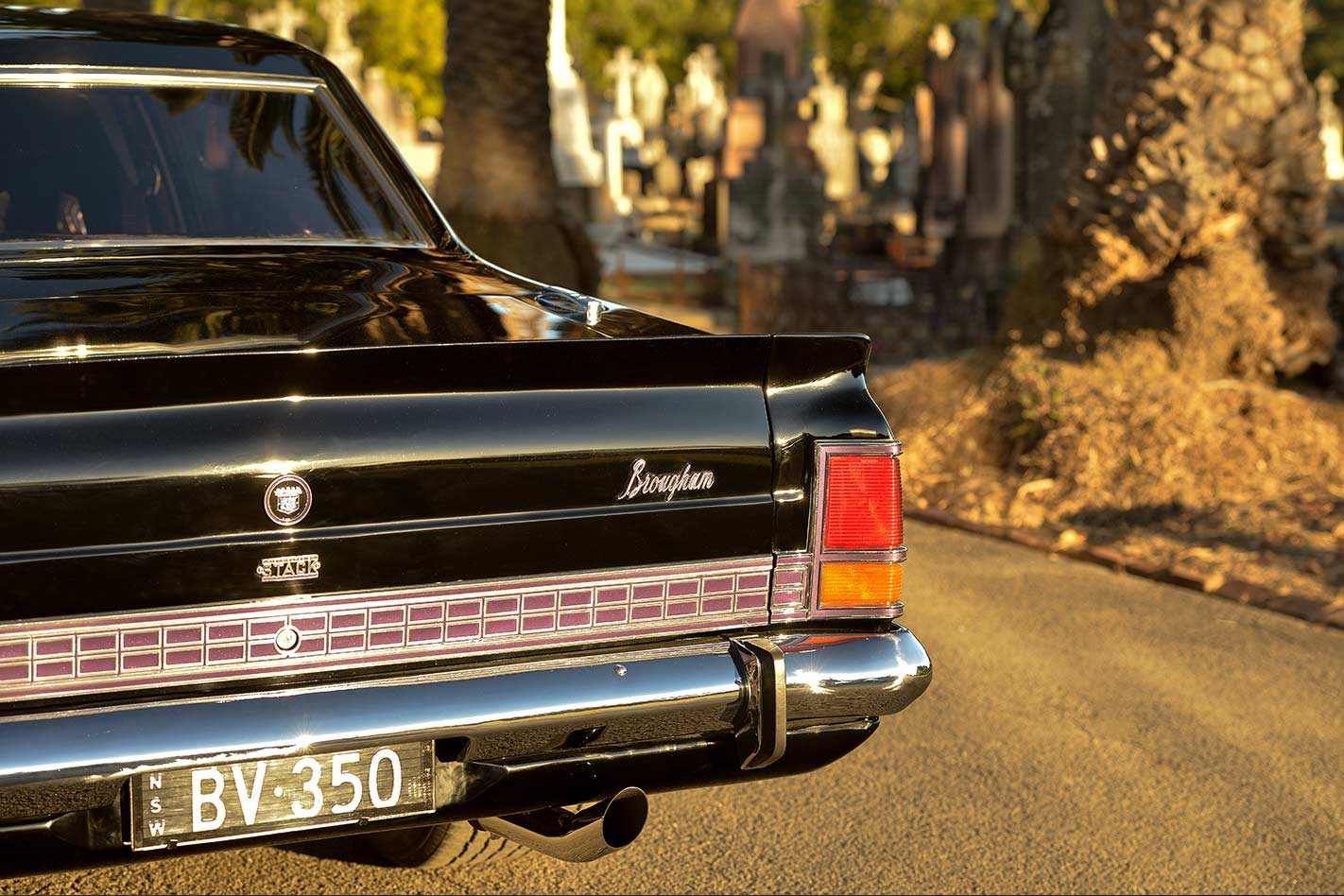 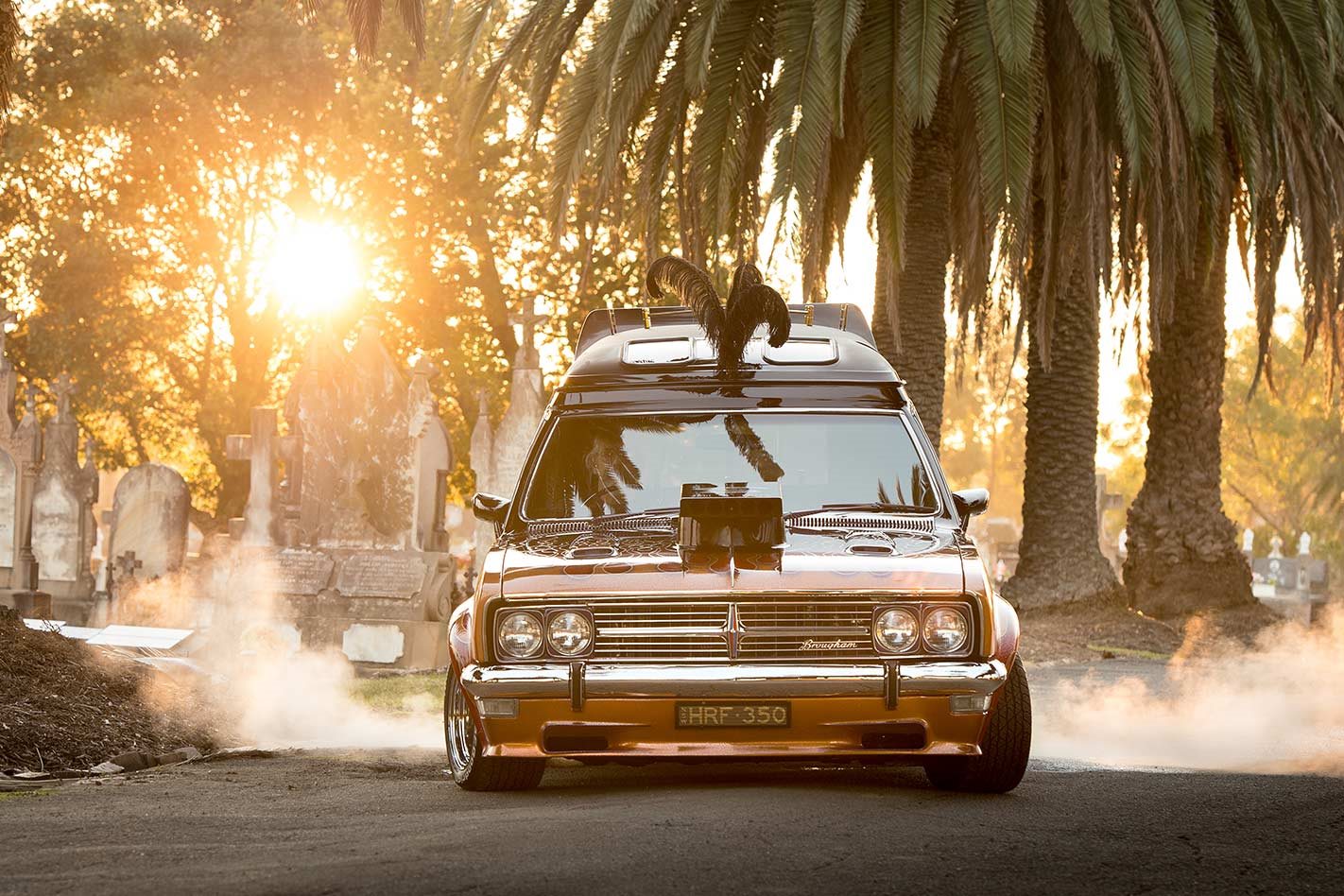 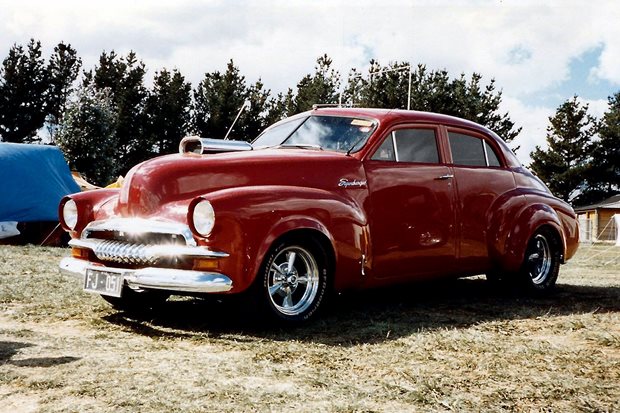 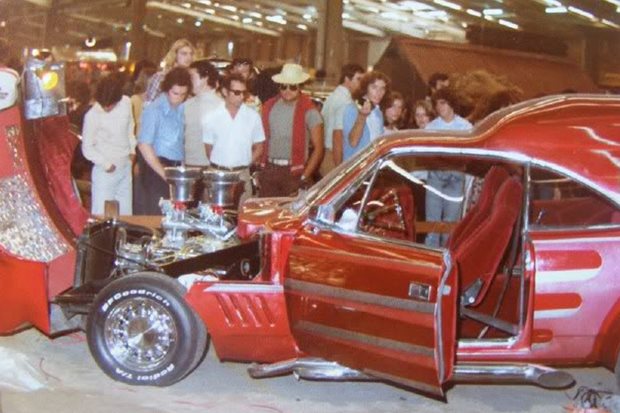 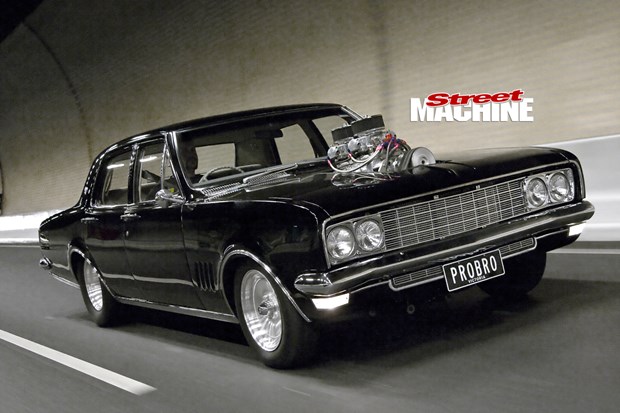