IN FRONT of a crowd of many thousands at the Summernats Supercruise, Kurt Martiensen’s HK Holden Premier performed what some would call a miracle. It outshone some much more revered machinery, and proved that simple style, trick paint, decent rims, something respectable under the bonnet and a neat original cabin are all a good streeter needs. Makes this street-machining thing sound like a piece of piss, doesn’t it?

Kurt will be the first one to tell you that if you believe that, then you probably have boxes of tinned food left over from when the Y2K bug threatened to crap on the world. 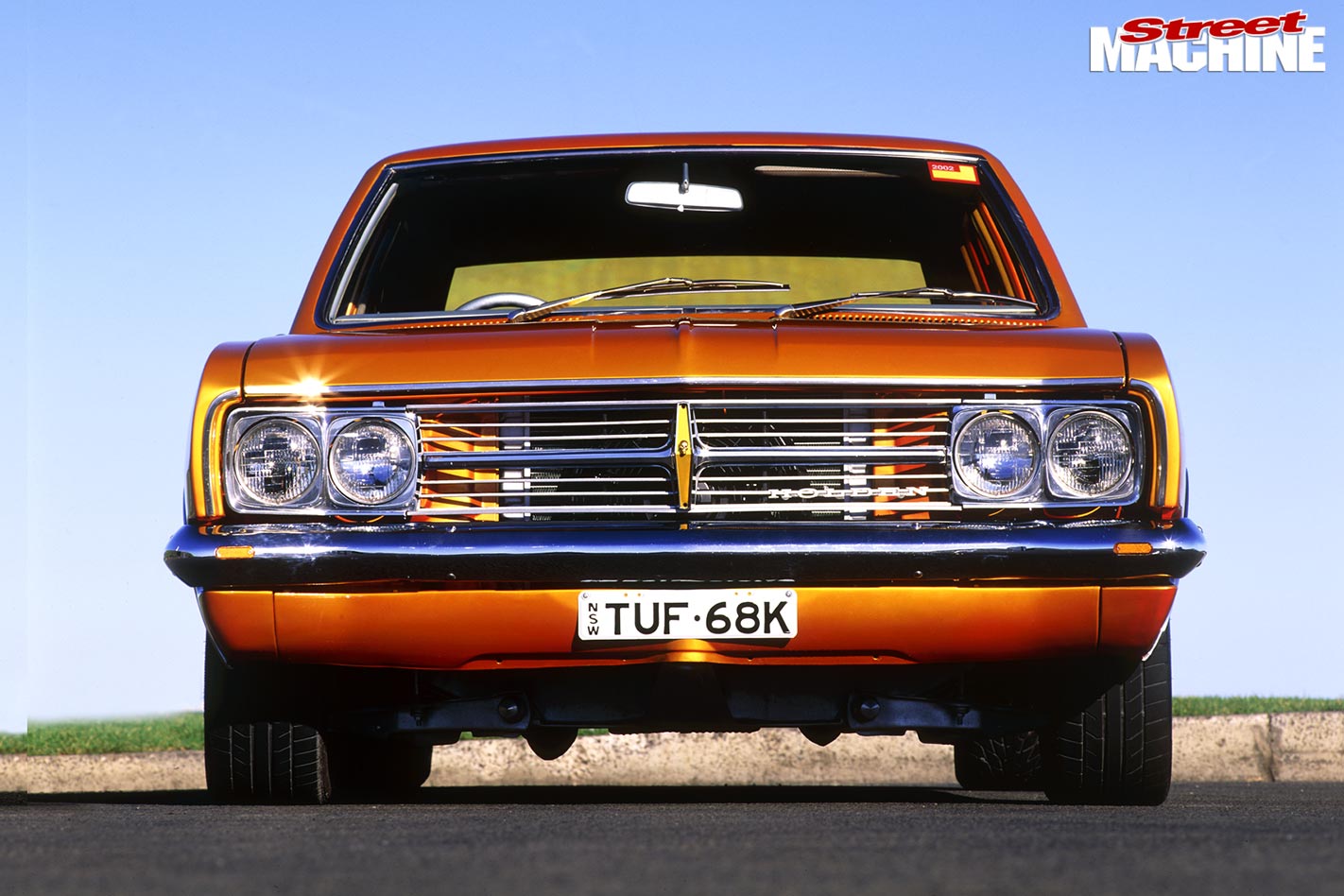 Despite being newsworthy in 1968, HK sedans have lived their lives in the shadow of the iconic Monaro. Mention the HK, and the image of one bullshit-looking coupe usually springs to mind. So it’s refreshing to see such a neat-looking four-door. For starters, the HK is the only Holden (except the HB Torana) to hint at Coke-bottle styling. And the HK Premier’s Monaroesque elongated tail-lights (they extend 300mm into the bootlid but are mostly paint) and the chrome grille endow the car with style the later HT and HG somehow lacked.

The HK is special to Kurt because it was his first car. Which is why, after spending many years driving Chevs, he went back to one.

Kurt picked up this HK Premier from his brother. It was dismantled and a bit bent, but there was no rust. It came with a bonus. For some reason the bloke who originally bought the car had ordered a spare interior from Holden, just in case the original wore out. So when his widow unpacked the whole lot at the time the Prem was being sold, everything looked as it did the day it left the factory (except for the dust). How many of us wish that would happen to us? 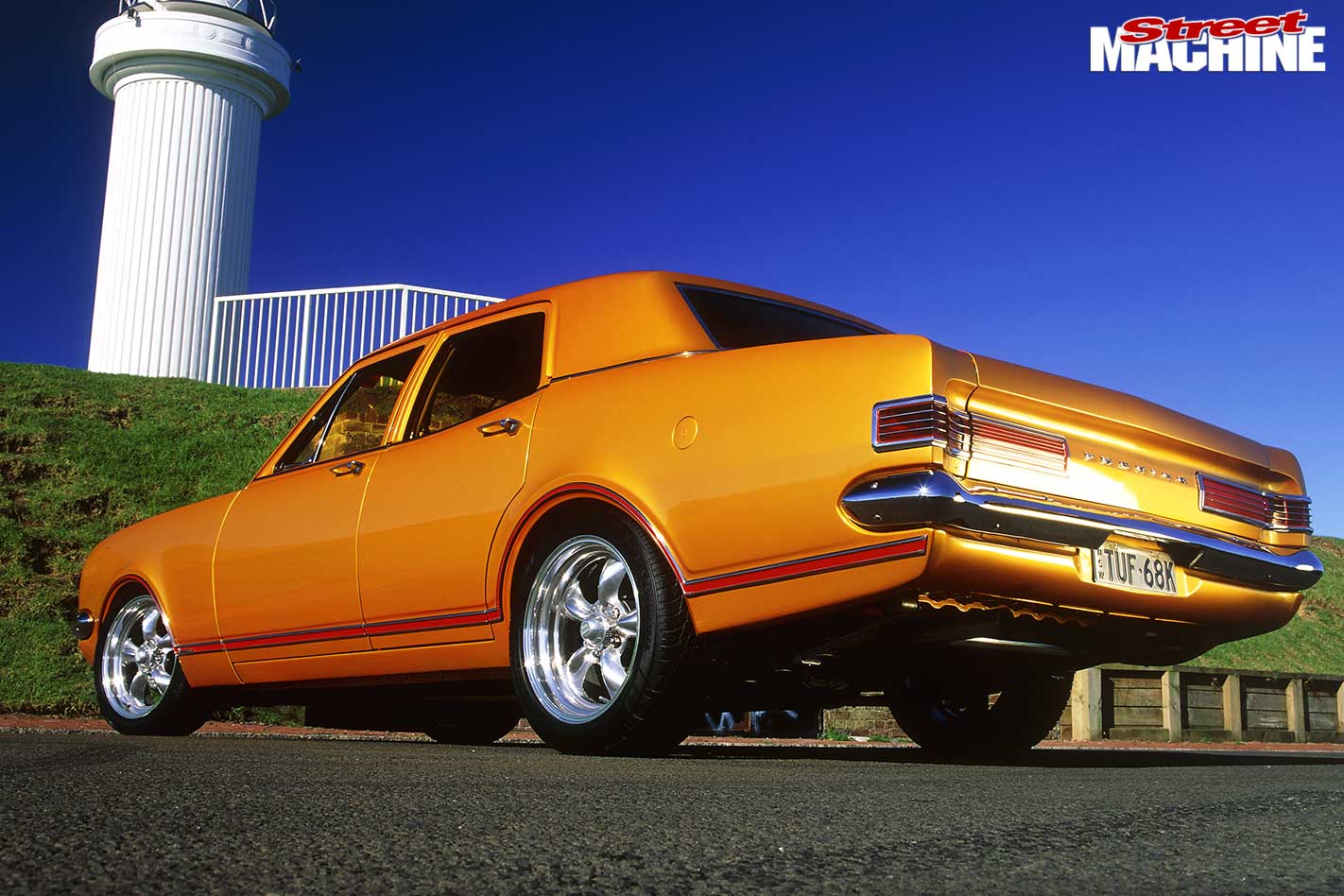 Bodily, Kurt’s HK is fairly simple. Retaining only the full-length lower side trim, the chrome strip around the window line and the Premier badges on the boot gives the car a clean, unfussy appearance. The drip rails have gone. The front blinkers are gone (replaced by smaller units in the bumper). The petrol filler has been smoothed and the driver’s mirror is now a small, subtle chrome jobbie.

Kurt did most of the work himself at Precious Metal, but the stunning respray in De Beer Precious Gold was finished by Helensburgh Smash Repairs. Kurt reckoned gold was the way to go and he trawled through stacks of colour charts to find the right one. The De Beer gold he chose is meant to be used with a silver undercoat, but they only had an orange base, so orange it was. And what a result. It looks far brighter than it would have if things had gone according to plan! 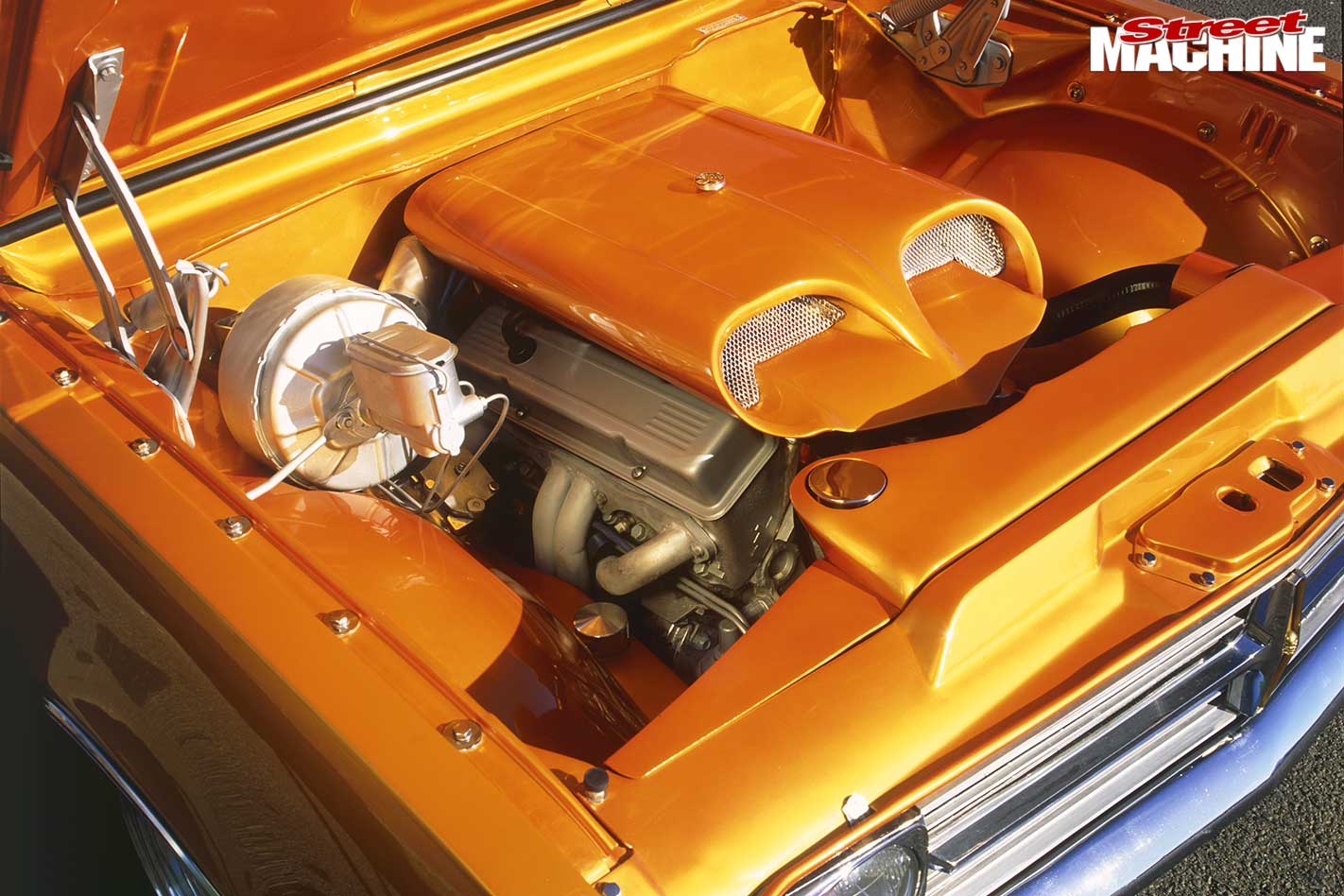 Inside the HK’s smooth engine bay is a worked 283 Chev V8, built by Kurt’s dad, Byron (who is no longer with us). His 327-cranked, 5.4-litre donk breathes through a Holley 850 double-pumper, a Weiand manifold, Bathurst 350 heads and a Heatseeker camshaft. The exhaust uses Genie extractors and a 2-inch stainless system. The ignition is Accel electronic.

Have a gander at that handmade air cleaner! It’s hard to say what it resembles, but its character is certainly akin to the front end of a 1970s Pontiac Firebird. And the mods don’t stop there. A cowl was made to hide the crossflow radiator, and now conveniently hides the headlight wiring as well.

Laying the HK’s much-improved power to the tarmac via a Hardie Spicer tailshaft and a sprint-geared 4.44:1 Group A Commodore mini-spool diff, is a tricked T350 three-speed auto. The converter is a 3800rpm unit, and the 225/50 rear tyres (mounted on 17x8-inch American Racing rims) supply plenty of grip and fill out the HK’s voluptuous wheel arches beautifully. Three-inch drop spindles keep the HK’s nose pinned to the ground and the rear springs have been lowered three inches to match. 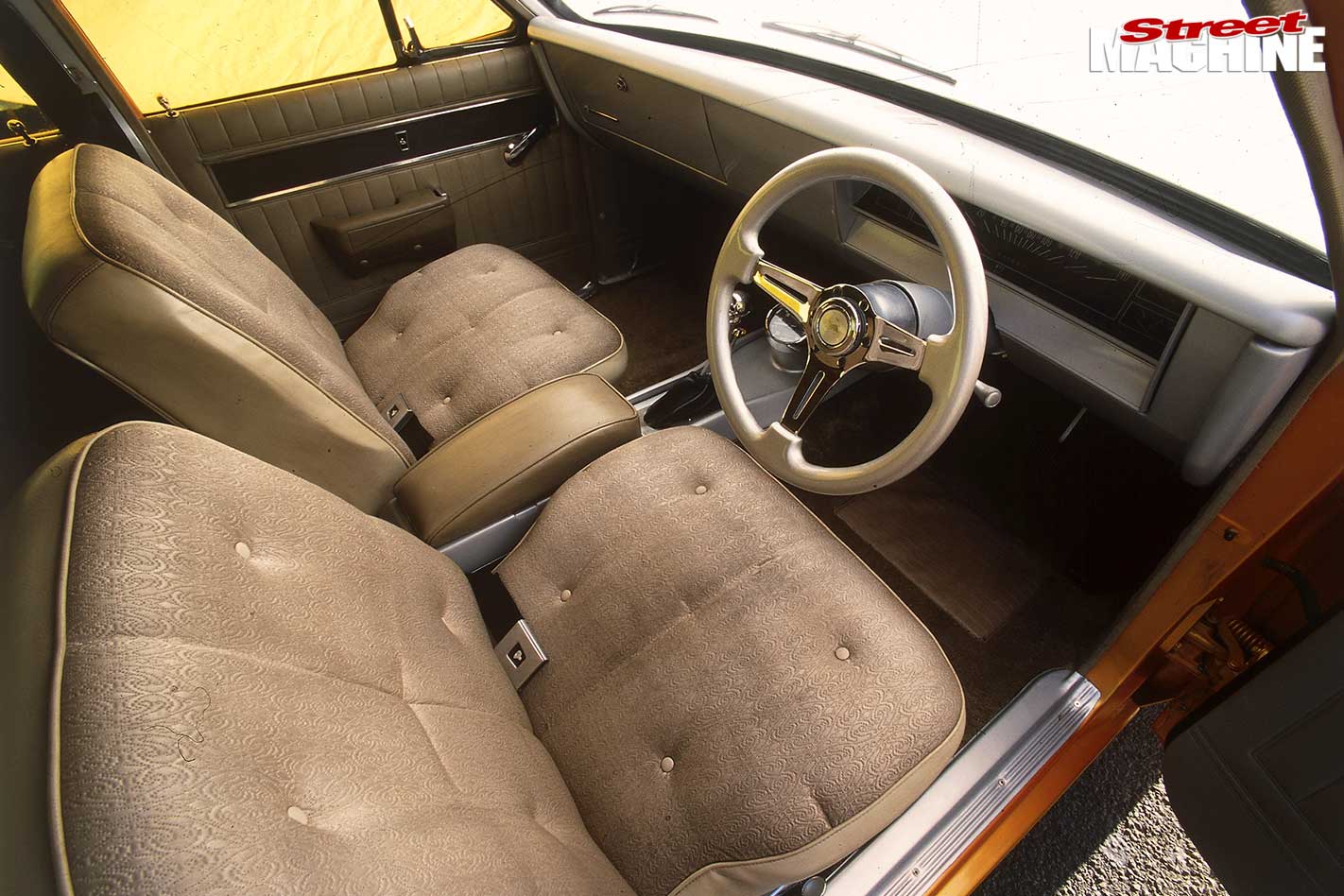 Hauling the HK down from the considerable speeds it can now achieve is the sort of braking package original HK owners could only dream about – four-wheel discs – polished HZ Holden rotors up front, Commodore units out back – with good-quality pads and the stock master cylinder.

Inside, only the Knox carpet constitutes ‘new’ trim. The light-tan seats are circa 1968, still wearing the original Morrokide upholstery. The mock-wood door trims, the centre armrest, the seatbelts and the strip speedo, all as old as the hills, look as fit as ever. The dashboard has been stripped of its fake wood and painted matt silver to match the centre console. The instrument cluster is from a GTS. The steering wheel is Grant and in classic street-machine fashion, the B&M shifter is topped with a giant-sized version of the skull that graces the door locks. In front of the shifter sits an Auto Meter tacho – in the position of the one used in the HK Monaro GTS. 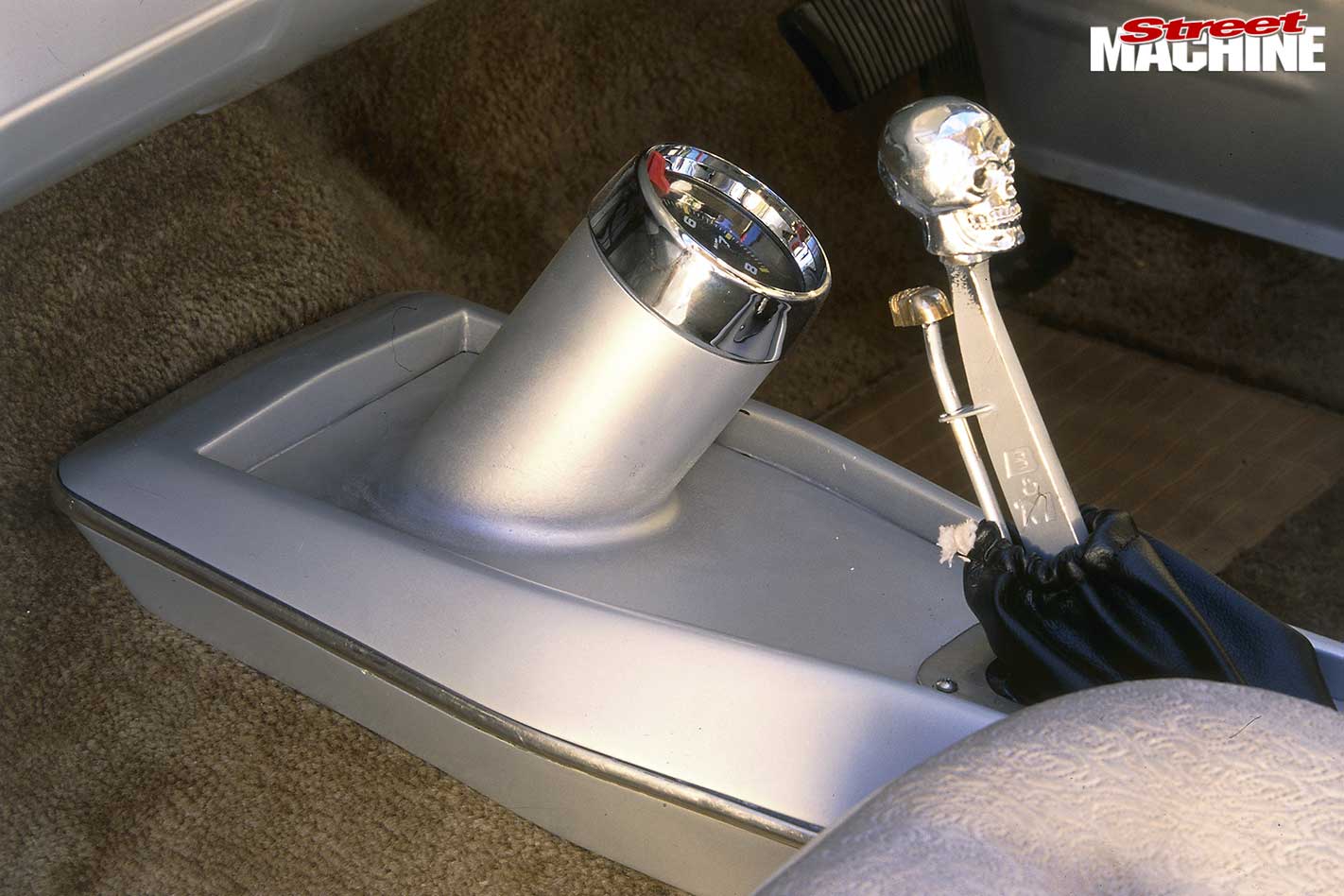 If you reckon that’s a dumb place for a tacho, Holden put it there in the HK GTS

With the hard work that went into the car from mates Stuart Smith, Andrew Neale, Christopher Rolfe, Carl Martiensen, Craig Armstrong (wiring), Peter Doesberg, Mark Wooldridge (no, not the tennis player) and his late father, it’s no surprise the HK notched up Top 80, an Encouragement Award and Promoter’s Choice at Summernats 14.

But although it’s only been finished six months, the HK has to go – Kurt has to focus on a triumvirate of lush old Yankee iron, a ’41 Chev pick-up, a ’57 two-door hardtop and a ’34 Chev coupe waiting in the wings.