After a couple of less-than-ideal visits to Summernats, Jason Dillon made sure his 1969 Camaro pro tourer had the reliability to match its menacing looks and prodigious grunt

JASON Dillon drew a deep breath and hit the ‘Buy’ button on a 1969 Camaro. That’s when the anxiety set in. 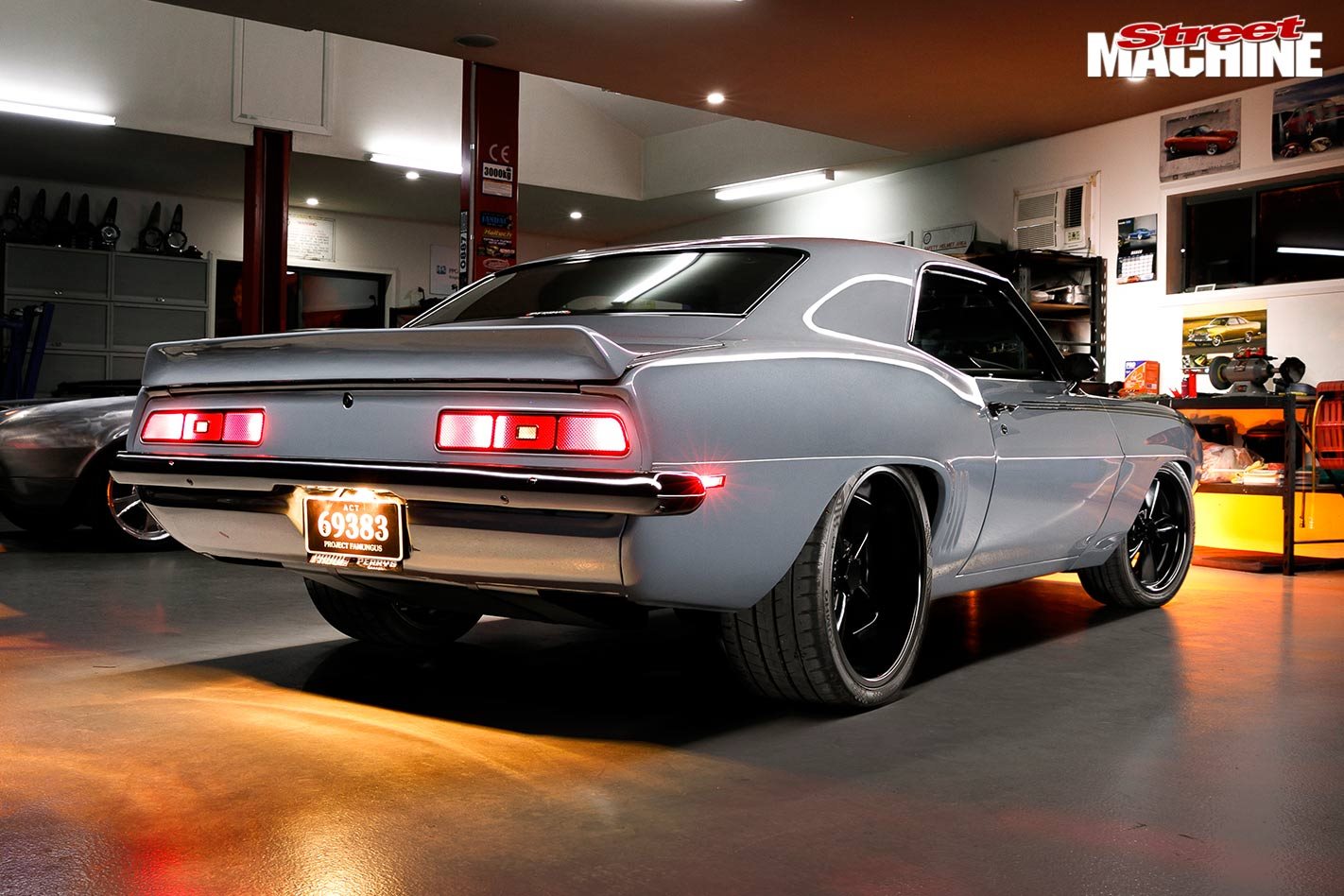 Like the colour? Forget trying to find it on a paint chart – PPG Battleship Grey doesn’t exist. It is a custom shade crafted by Baydon Pryce and Jason

“Almost immediately, I started second-guessing the decision, even questioning if the car actually existed,” he says. “I bought it sight-unseen off Racing Junk. A local mechanic was selling it on behalf of a lady who had lost her husband several years earlier. I knew it needed a bit, but I got it at a great price.”

Much to Jason’s relief, a lime-green pony car eventually made its way across the big pond and landed in his driveway. Once it was safely parked in its new Canberra home, Jason gathered the whole family: wife Michelle and kids Madison and Riley. He wanted them to be a big part of the impending rebuild and help brainstorm ideas. 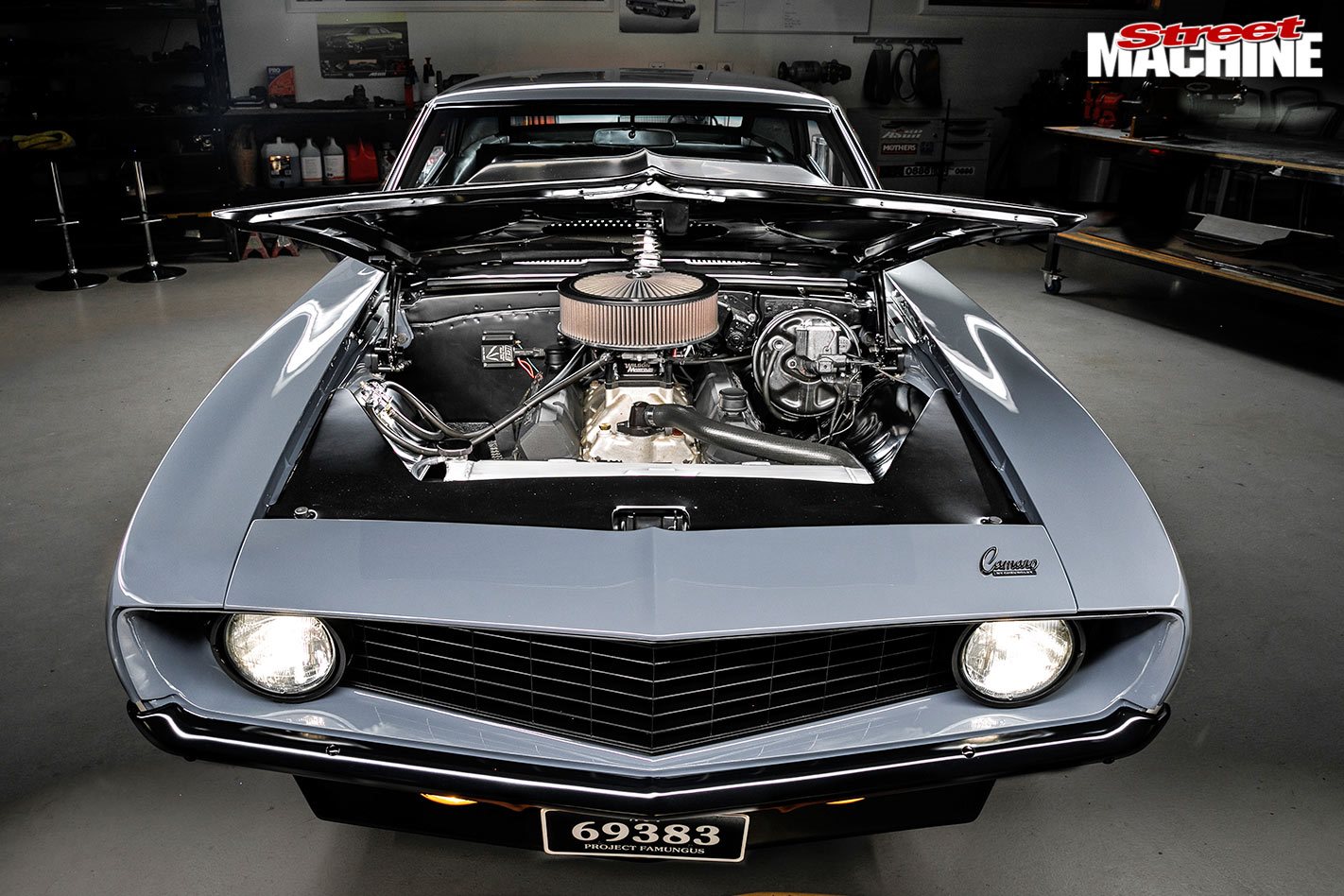 “I had to sell my previous Camaro – a beautiful black, genuine SS 350 called EVIL69,” Jason says. “That’s why this car was going to be something the whole family could enjoy. In the middle of tossing ideas back and forth, we came up with ‘Maximus’ [as a name for the project]. But the colour looked like fungus; then someone blurted out: ‘Famungus’. We all laughed and Project Famungus was born.” 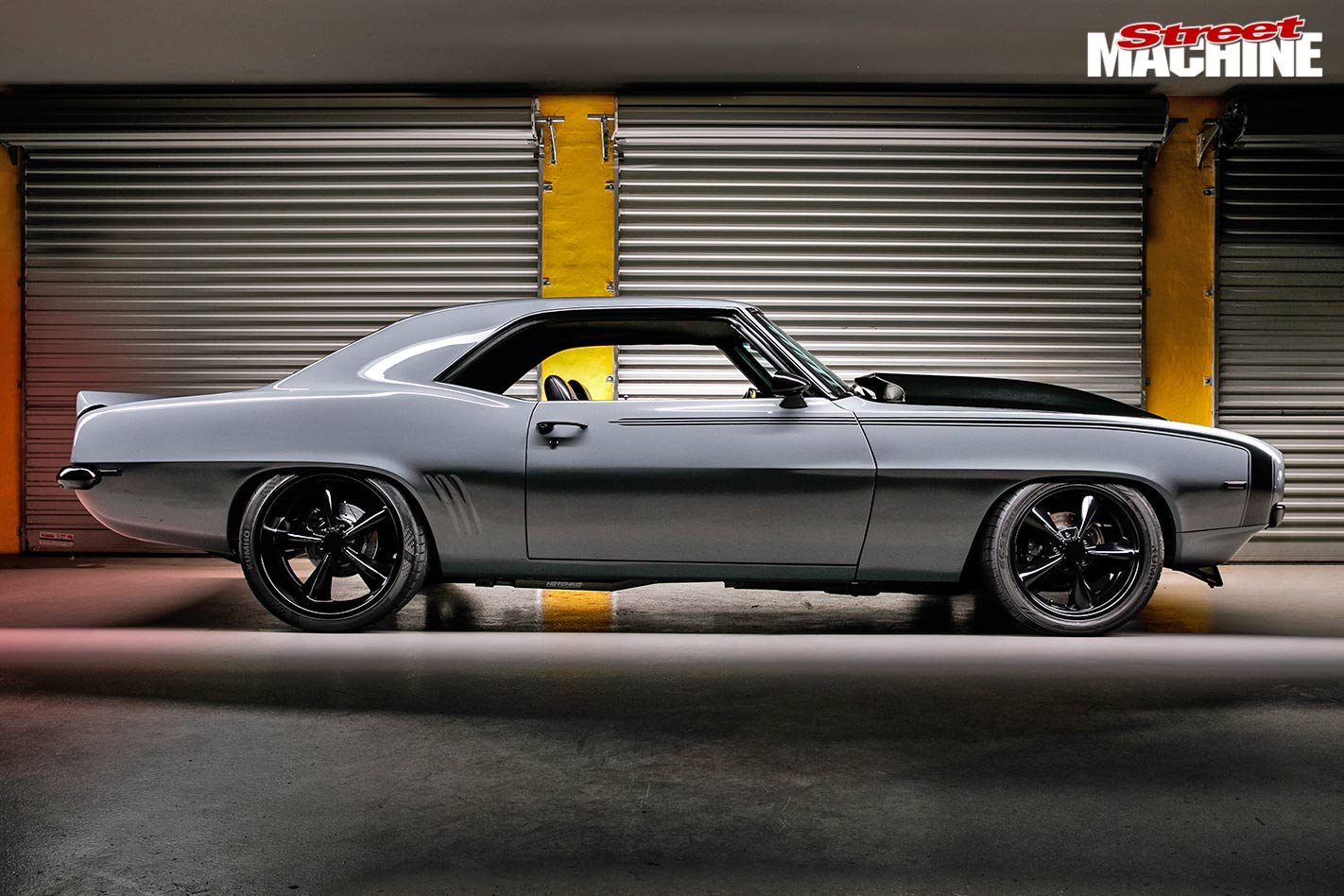 While trying to get it registered, Jason began to realise his new acquisition may need more work than initially anticipated. For example, the healthy 383 proved to be not healthy enough. Fortuitously, Craig from Dyno Tune at Belconnen had just finished screwing together the perfect solution: a tough-as 406-cube small-block good for 611 horses. Jason and Craig did an exchange, plus a cash settlement.

“I didn’t want a traditional pro touring LS1,” Jason says. “I like the tough rumble of an old-school V8. With its solid-lifter cam, it’s loud and cranky.” 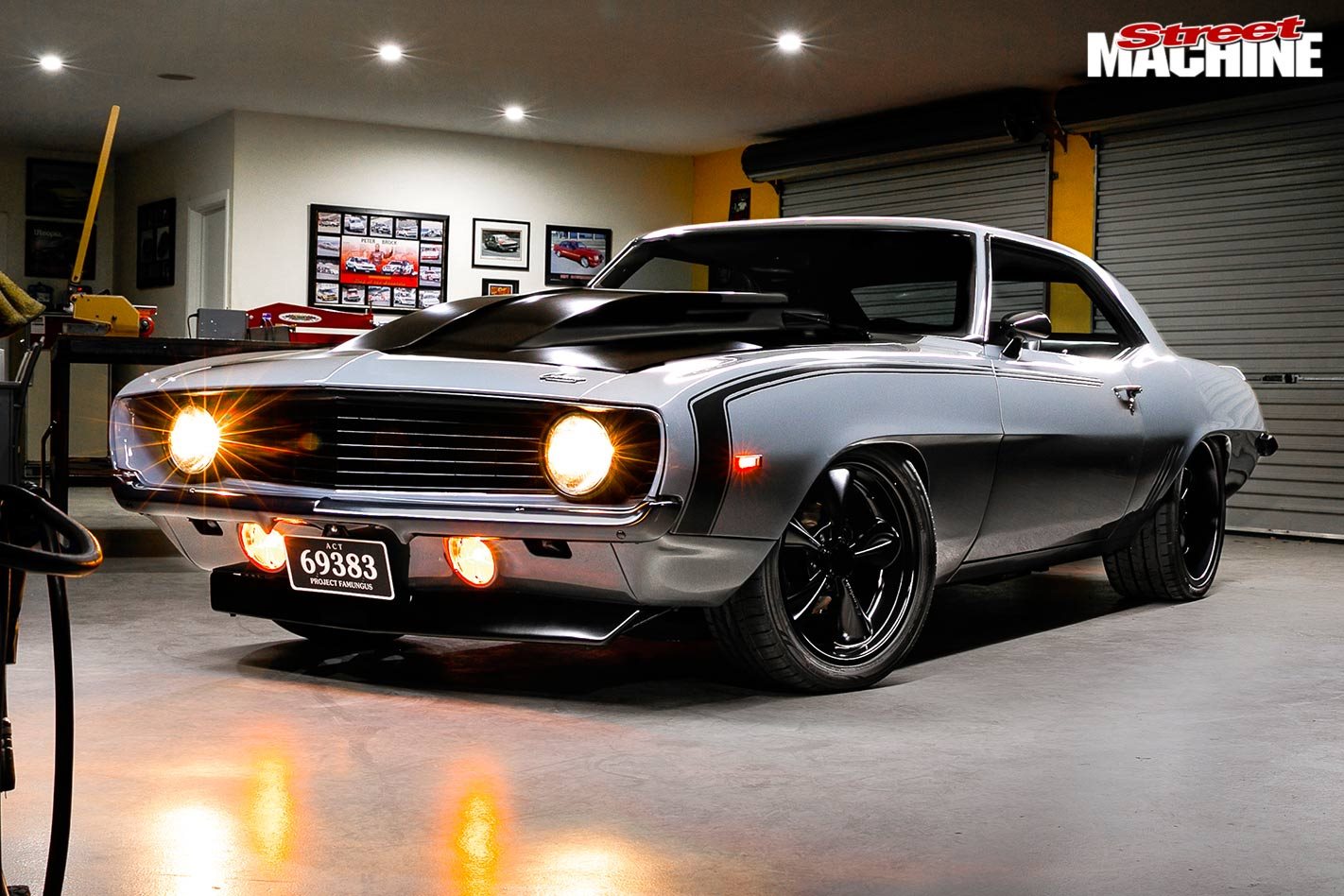 This is Jason’s second Camaro. He was forced to sell his first ’69 due to work commitments. However, Project Famungus has turned out so well, the pain of selling the previous car is now a distant memory. “We enjoy the car as a whole family,” he says. “The wife and kids love it just as much as I do. It’s awesome when the kids go up to pick up a trophy”

With Summernats 29 looming, the Camaro was vinyl-wrapped before heading off to Exhibition Park for a bit of post-New Year fun.

But the Summernats weekend turned into an unmitigated disaster for Jason. The Camaro broke down during the City Cruise, continually overheated and had a nasty habit of fouling the sparkplugs. “I put five sets of ’plugs in it over the weekend,” Jason recalls.

Down but not out, Jason dragged the ’69 home in preparation for the big teardown. This is where good friends Kylie and Adam Perry of Perry’s Garage stepped in. 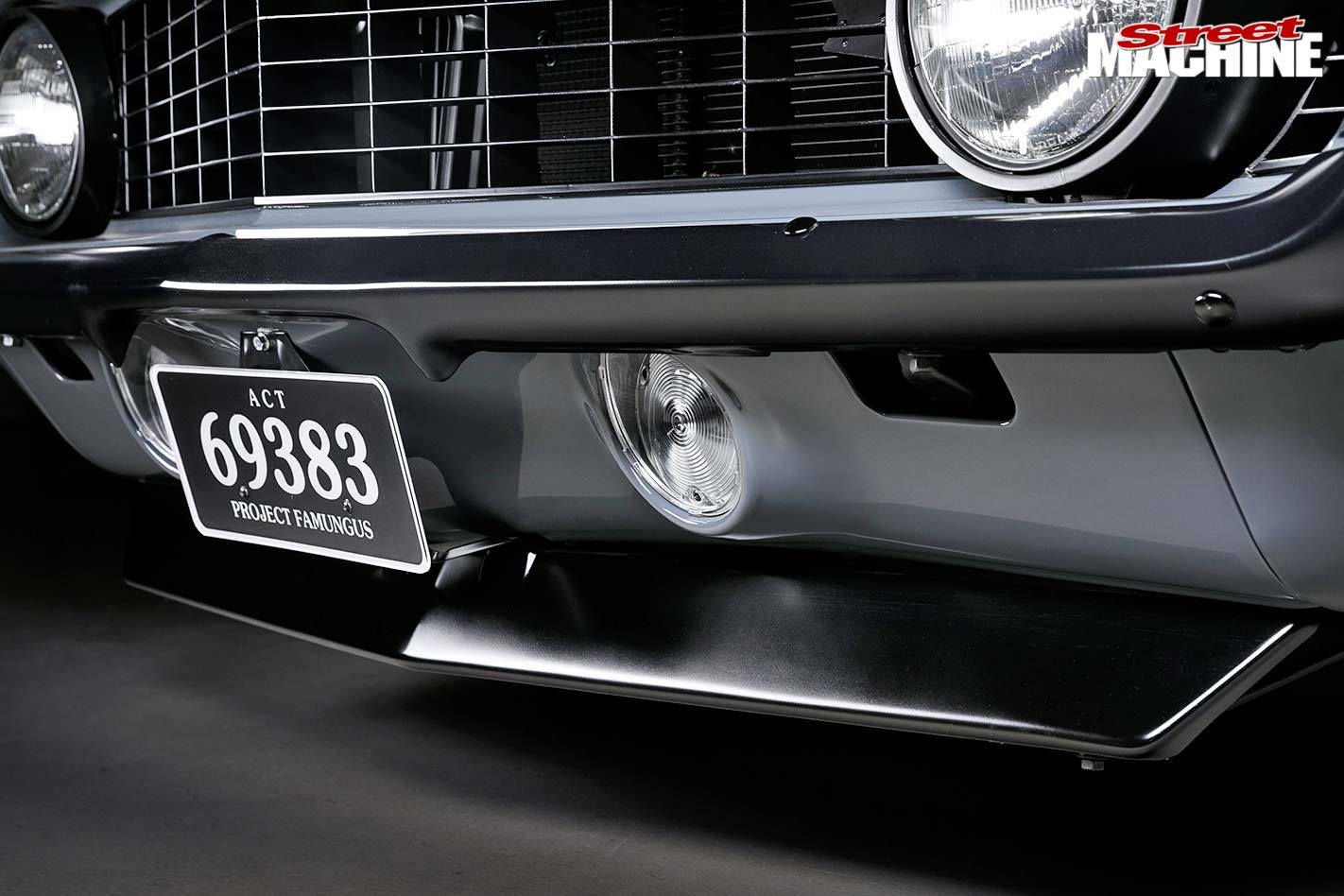 “I watched them build Tailspin [SM, Jan ’17], so I knew what they could do,” says Jason. “They took over the build and are the reason it’s this good and got finished at all! They were the project’s saviours – especially when my landscaping businesses dragged me up to Queensland for 12 months. I cannot speak highly enough of them.”

The first order of business was soda-blasting, and not a lot of the car came back. 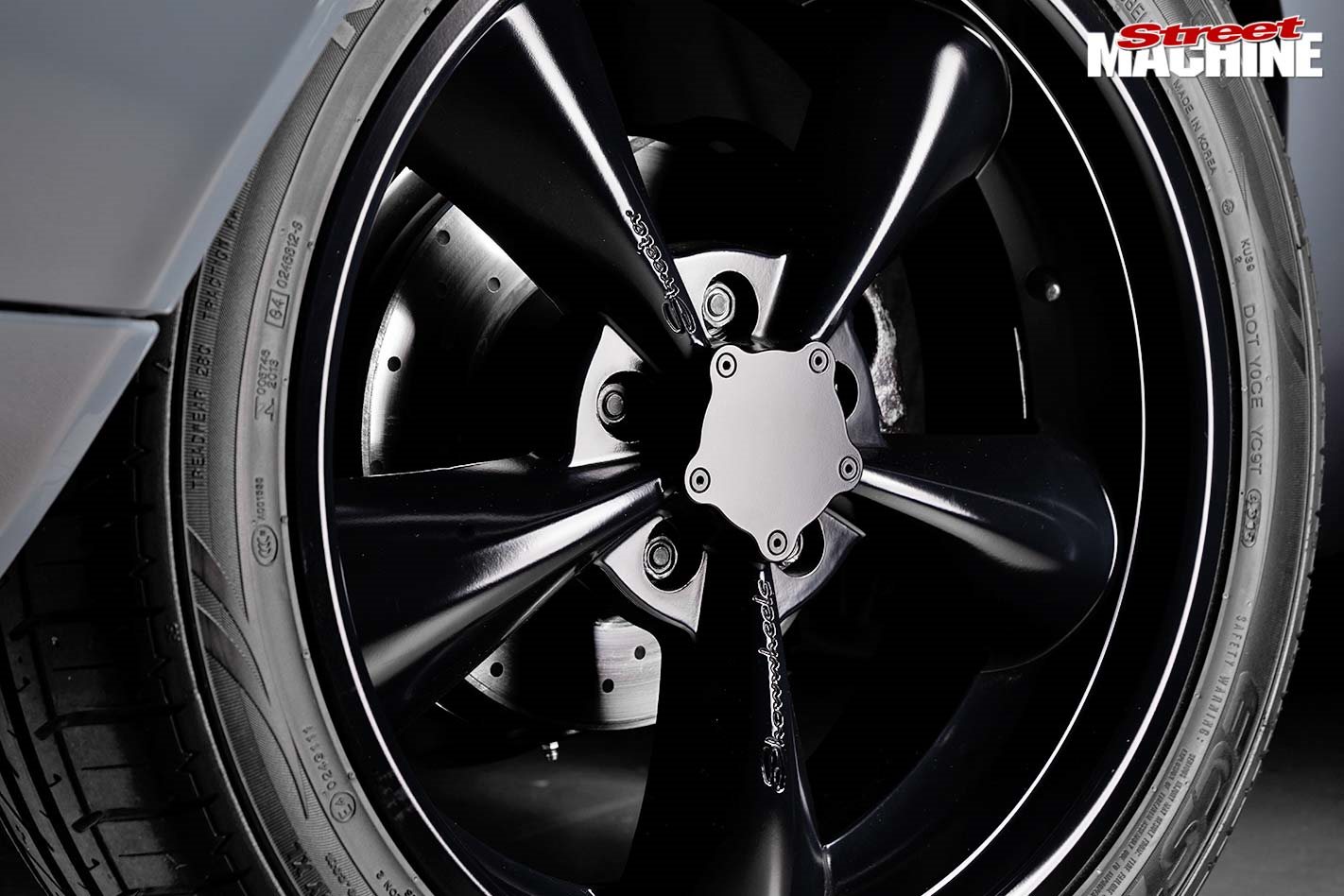 The race-inspired flat centre caps for the 18x7 front and 20x10 rear Streeters were custommade. The wheels were also finished in satin-black to match the rest of the Camaro’s trim work

Although the body was shot, the shift-kitted TH350, 10-bolt diff, tailshaft and most of the interior was spot-on.

The Perrys set about replacing the cancerous bits with fresh metal. This included replacing both guards, the bonnet, floors and sills, and repairing the doors and quarters, before gapping it all up. While they were at it, they smoothed the firewall and added a set of DSE mini-tubs. These factory-looking stampings enable the rear haunches to swallow the 295/30R20 rubber mounted on fat 20x10 Showwheels Streeters. 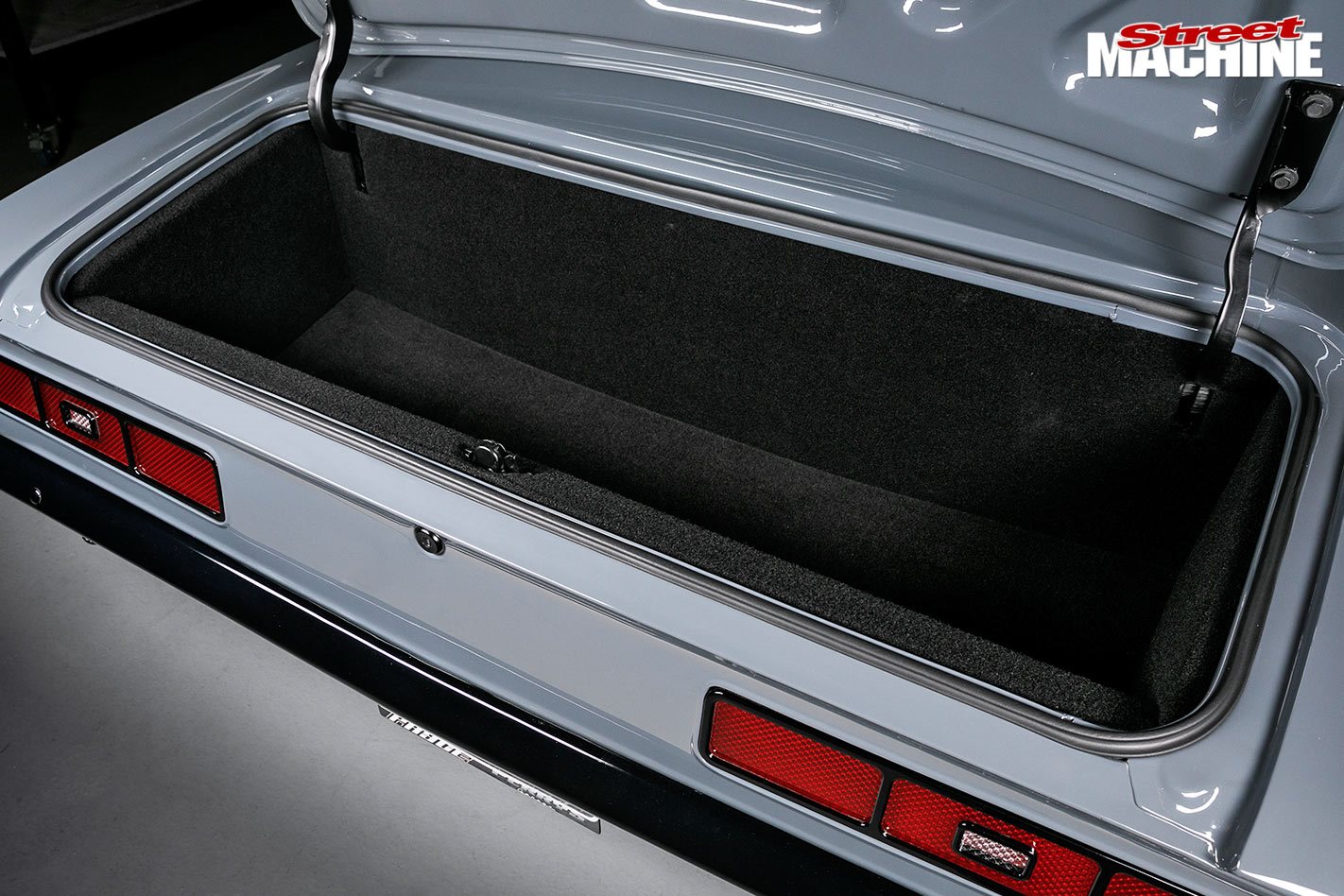 Hotchkis chassis connectors were installed and the replacement front clip for the rusted-out original was seam-welded to improve structural rigidity. The lowered rear springs are from DSE, while the stock front suspension has been converted to QA1 coil-overs. For ease of ACT rego, the brakes remain Chevrolet – albeit beefy race-spec units from a COPO Z28. “It stops on a dime and handles really well,” Jason says.

Next up to bat was Baydon from Pryce Refinishers. Baydon was keen to break into the high-end refinishing game and let it be known he was up for the challenge. 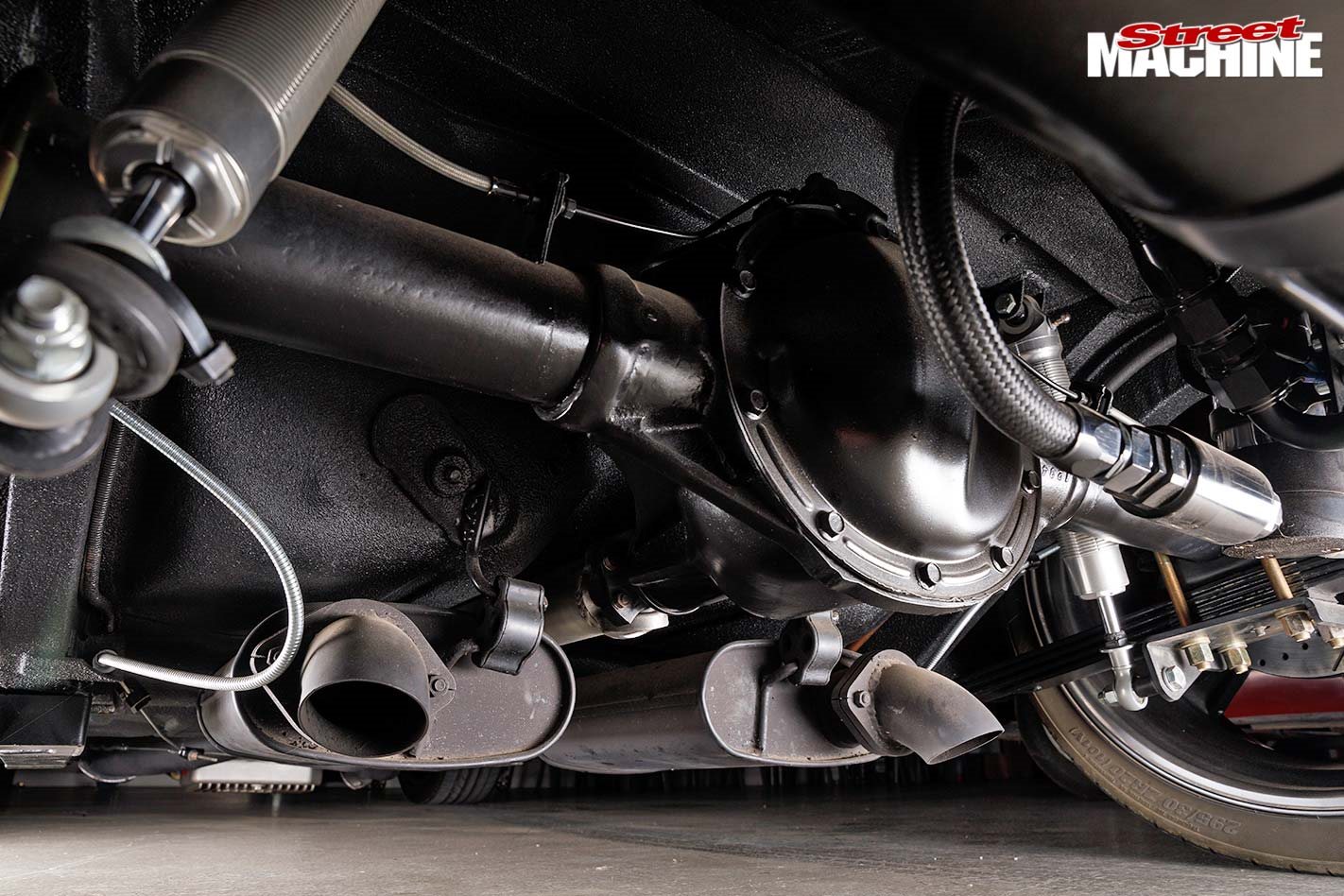 His work doesn’t disappoint: Project Famungus stops you in your tracks, especially the colour.

Built with a less-is-more philosophy, for this ride gaudy candy paint was out of the question. Jason knew exactly what he wanted – it just didn’t exist yet. So him and Baydon began with PPG Dunlop Grey and started removing yellow until they landed on the shade they were after. 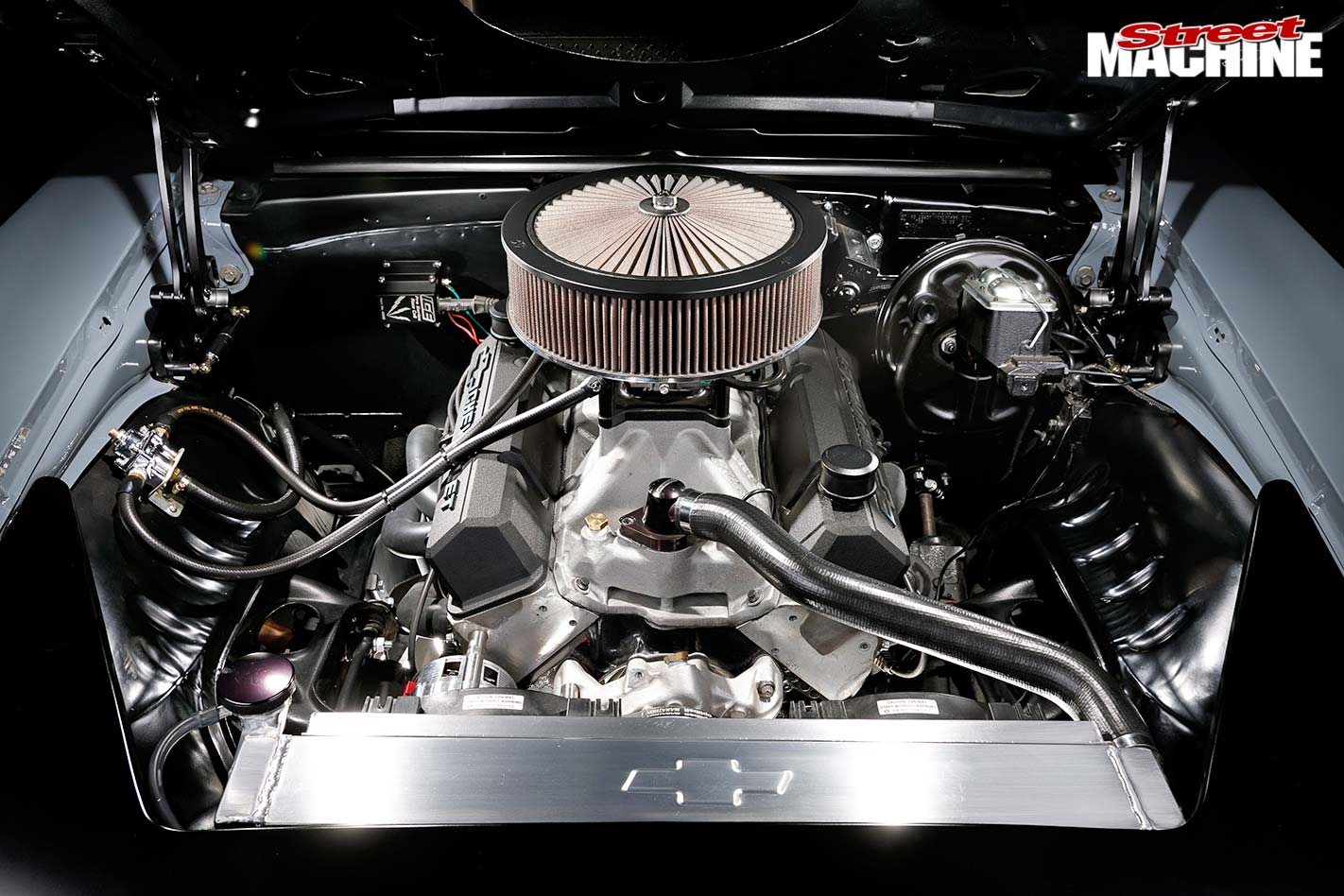 The super-sanitary bay houses a tough-as-nails 400 small-block Chev punched out to 406 cubes, and is essentially devoid of any bling. In keeping with the concept of more time driving than detailing, the underside was given the Raptor wrinkle finish

“At Summernats, this infuriated the PPG guys,” Jason says. “I’d tell people it was PPG Battleship Grey, who then headed up to PPG chasing the code. PPG got sick of telling people no such colour existed!”

On the inside, the Perrys replaced and retrimmed many items, before outfitting it with plenty of gear for cruising tunes: a Pioneer CD/tuner, two Pioneer amps, 6x9 speakers and a pair of 10-inch subs. 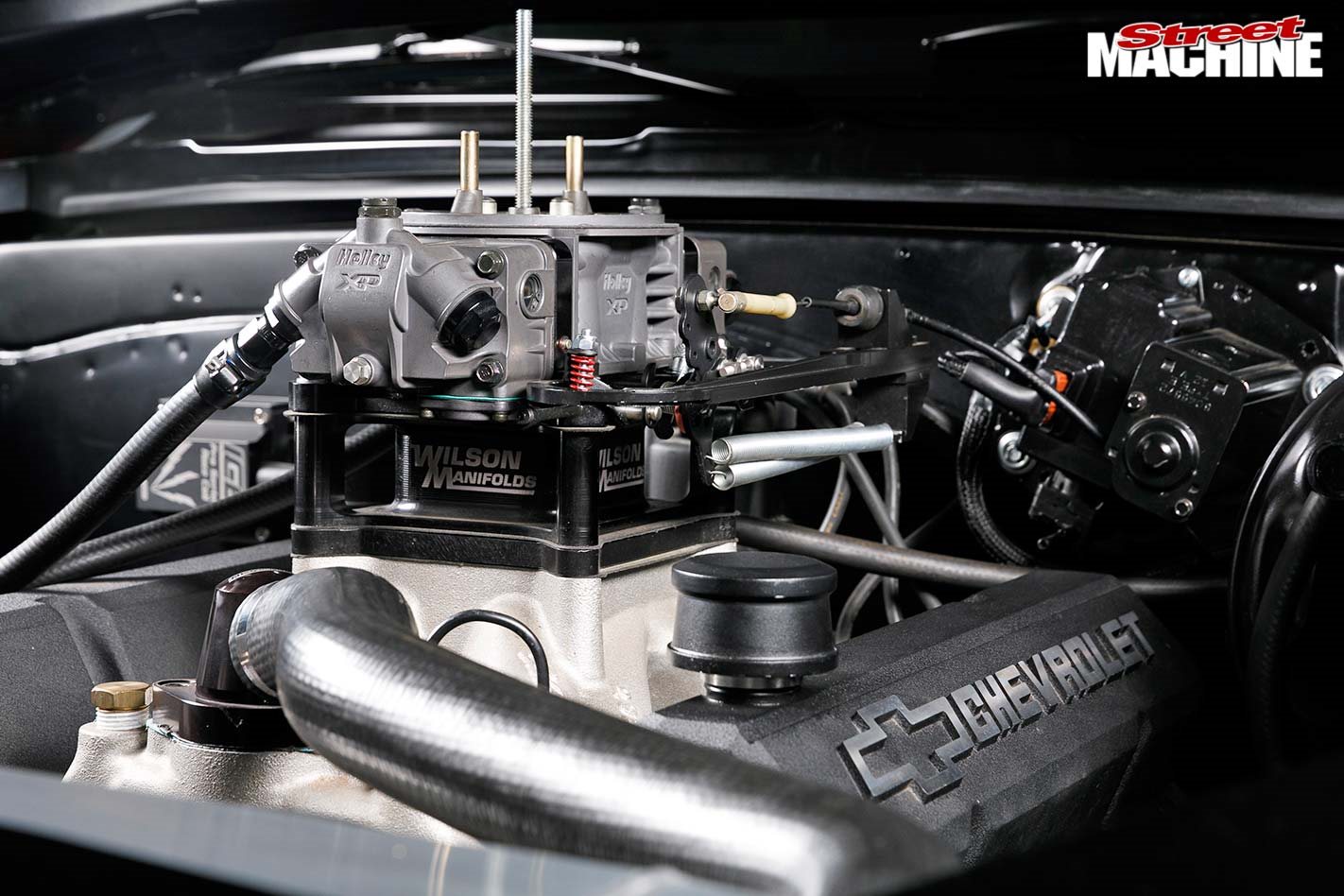 After yet another mad rush, it was off to Summernats 30. But other than being a Vibrance PPG Supreme finalist, Summernats was yet again a disaster for Jason’s Camaro. Once again, it broke down during the Supercruise, continually overheated, fouled ’plugs, leaked oil, needed a carby change, the fuel pump failed, and in the end the battery called it quits – arrrgh!

Jason and the Perrys took a three-month break from the car, during which time Scott and Craig from Dyno Tune worked through the issues. They swapped the drag-spec 1050 Holley to a smaller 850 unit to cure the sparkplug fouling issue, and fitted an Aussie Desert Cooler radiator. 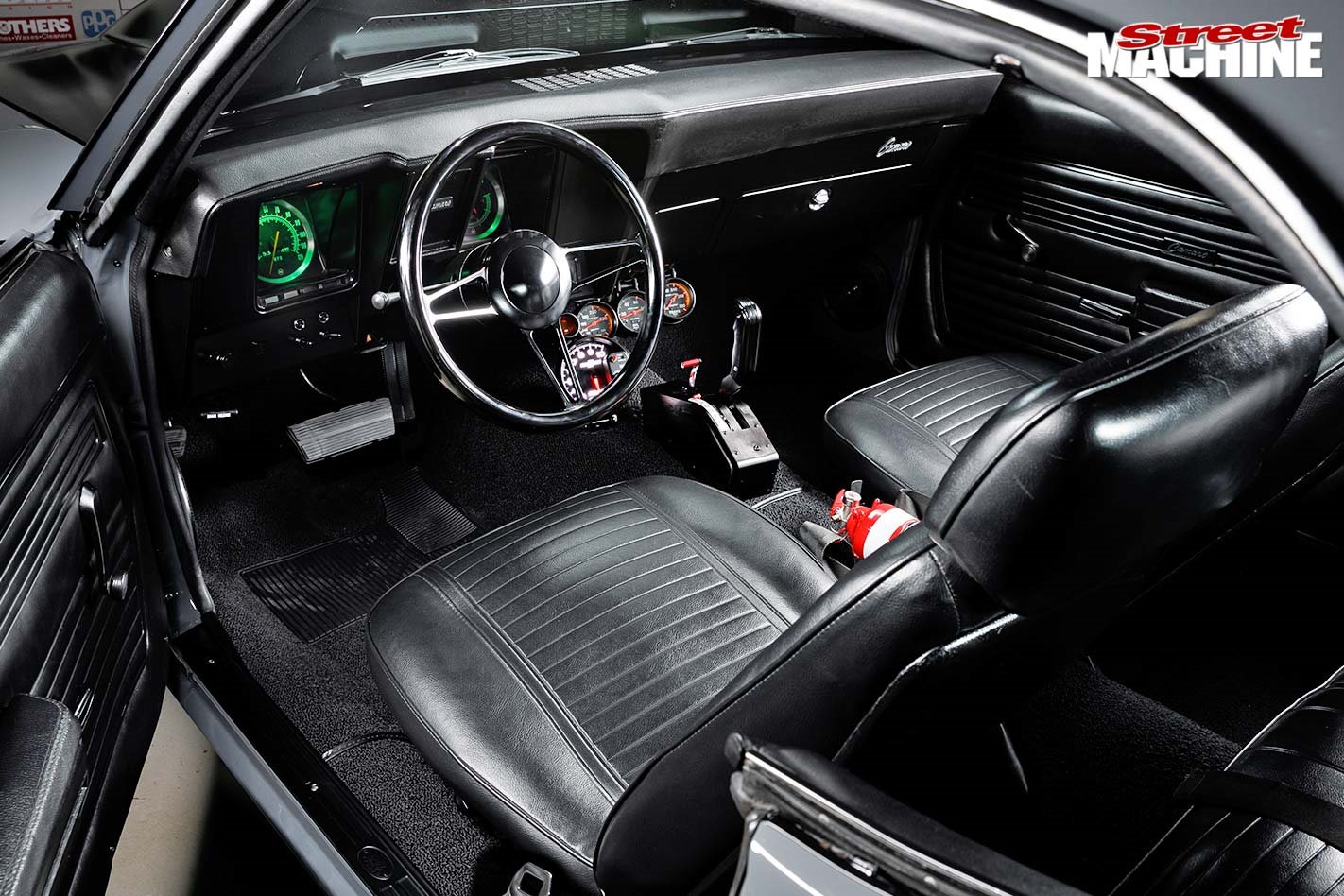 The updated instruments and extra Auto Meter gauges are a carry-over, but Perry’s Garage retrimmed a number of pieces and installed a thumping Pioneer stereo for cruising tunes

Kylie and Adam also spent some time making a few changes to the suspension, followed by Kylie working her magic on the paint.

“I rocked up to Perry’s Garage and I couldn’t believe it was the same car,” Jason recalls fondly. “Seeing it there parked next to Tailspin was incredible.”

The goals for Summernats 31 were simply to finish the Supercruise and get the car judged without any issues! Talk about exceeding expectations (read more below). 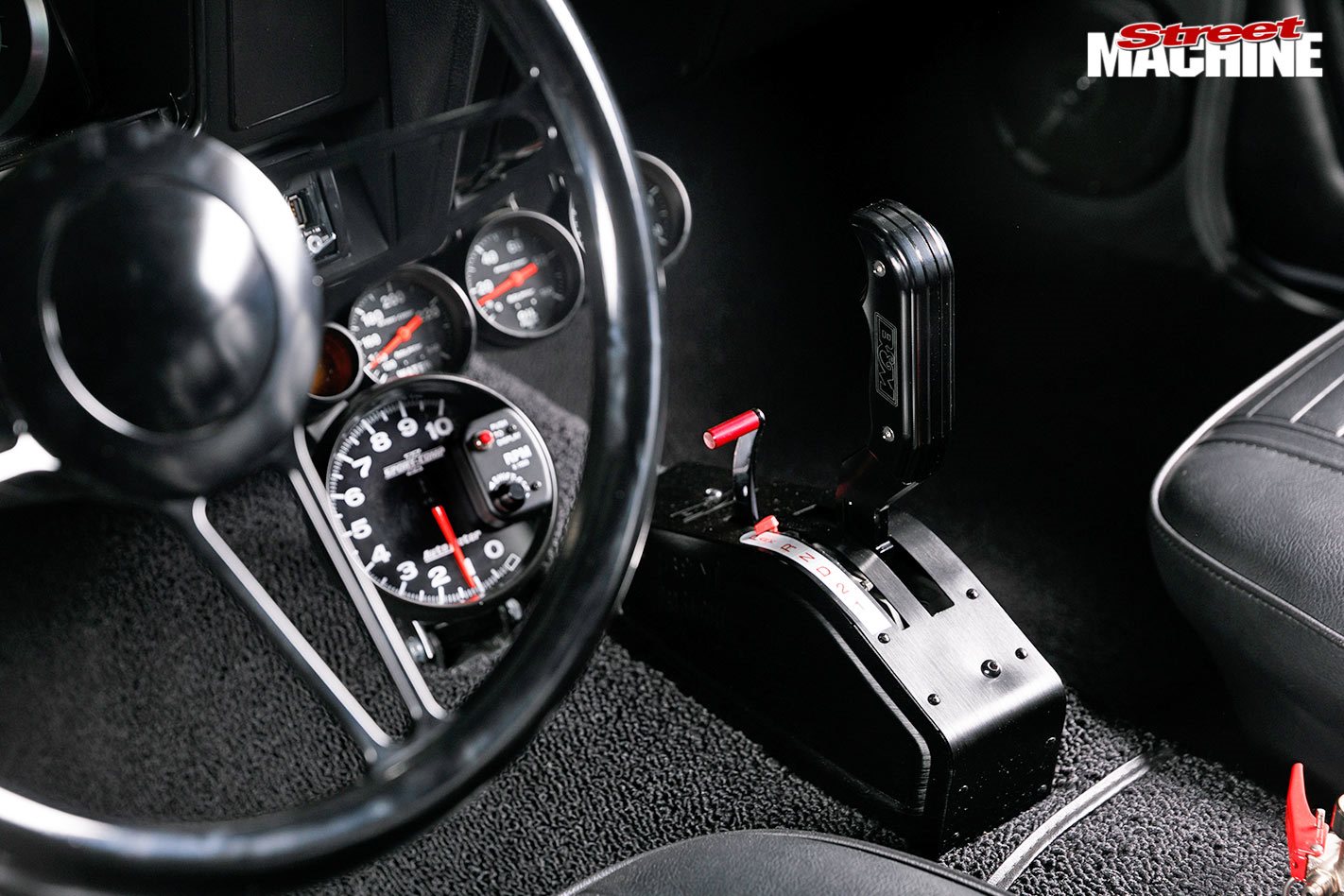 “The car didn’t miss a beat – even with the extreme heat,” Jason says. “Plus, we picked up two awards in the Meguiar’s Elite Hall – best Summernats ever!”

Best of all, by starting with a complete car, then wheeling ’n’ dealing unwanted parts, Jason was able to keep costs down.

“It was easily the cheapest car in the Top 60 hall,” he claims. “Despite being a tough and disheartening project at times, it’s turned out very cool – the car of my dreams!” 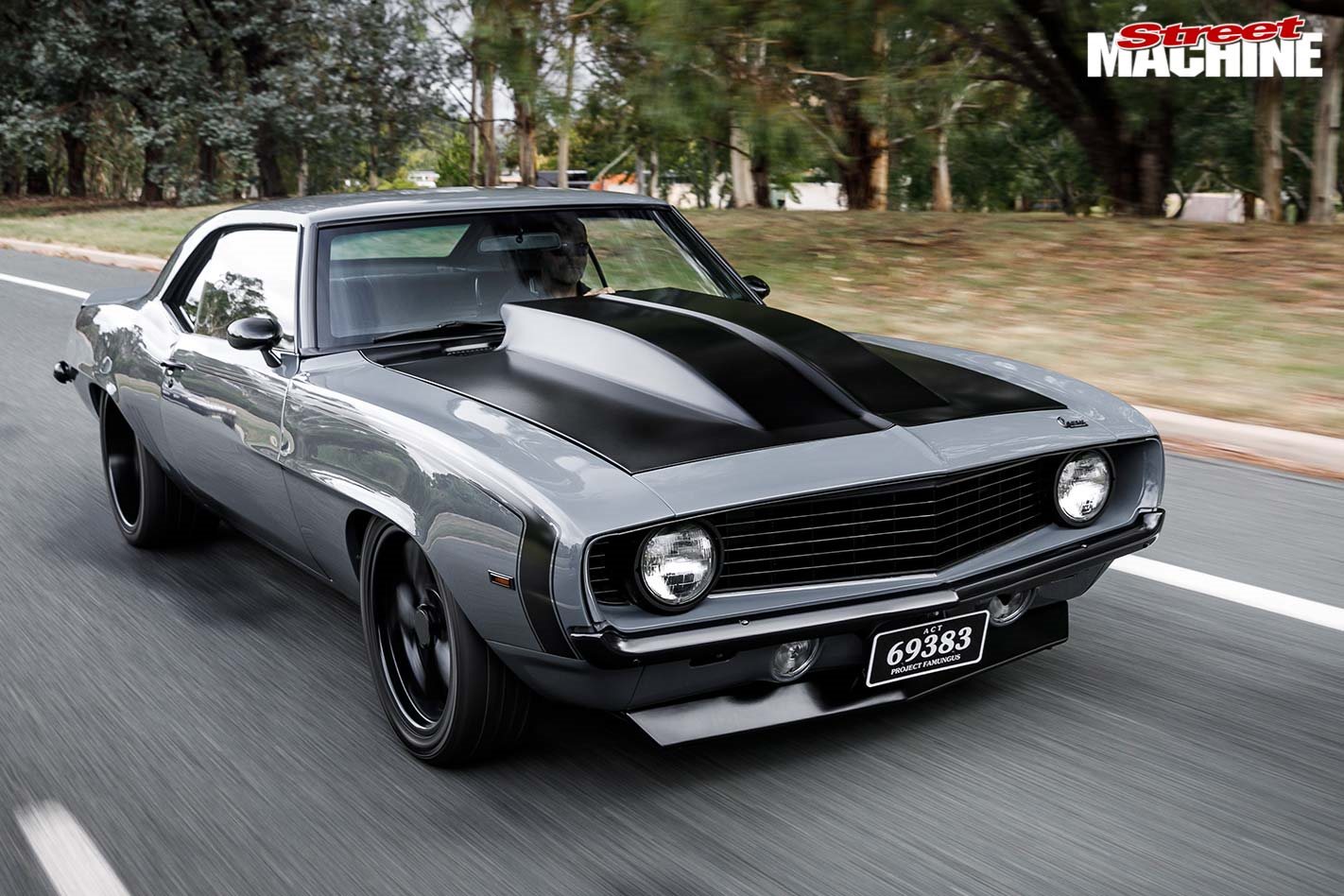 After the Camaro received plenty of interest at Summernats 30, Jason and the Perrys spent 2017 fine-tuning and detailing Project Famungus in preparation for a return at Summernats 31.

“I rolled into the judging hall on Friday, and head judge Drago Ostric wandered over and asked what we were doing,” Jason says. “I told him I was there to get it judged for Street Elite. He responded: ‘Mate you’ve got a killer car, why not put in Elite?’ That was the greatest compliment I could have ever received. There and then, I could have driven it home and parked it in the garage, happy the car had even been considered good enough for Elite. Then to make Top 60, plus win Outstanding Engineered Pro Touring and Top Pro Touring – I was blown away.” 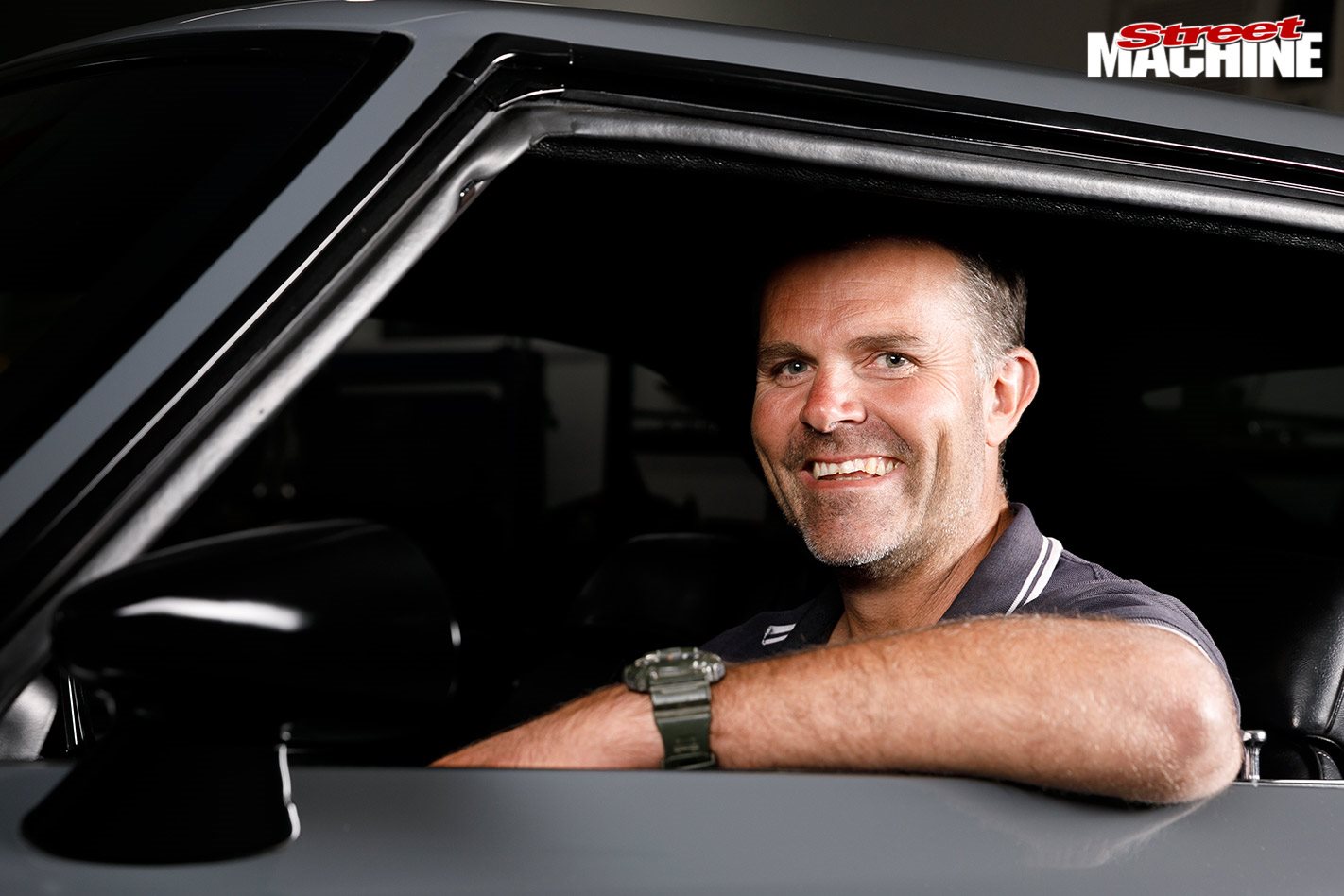