CHRYSLER takes you to a new leader. So claimed the advertising for the VF Hardtop in 1969 and finally that odd statement is ringing true. After four decades as the other two-doors in Aussie car circles, VF and VG Hardtops have come to the fore, partly by being more plentiful and partly by being cheaper than Monaro, Falcon and Charger coupes.

They’ve been the secret of a couple of generations of Aussie Mopar fans. They respond well to minimal mods and they’re literally Dodge Dart bodies from the A pillars back, which makes buying aftermarket trim, body jewellery and main shell panels a breeze.

The Yanks also scored everything from the trusty slant six to a variety of small and big-cube V8s, making engine transplants straightforward.

The tricky part with modifying Valiant Hardtops is achieving a balanced design — get it right and you’ll snap necks but get it wrong and their angular lines and chiselled panels scream that you’ve screwed up. 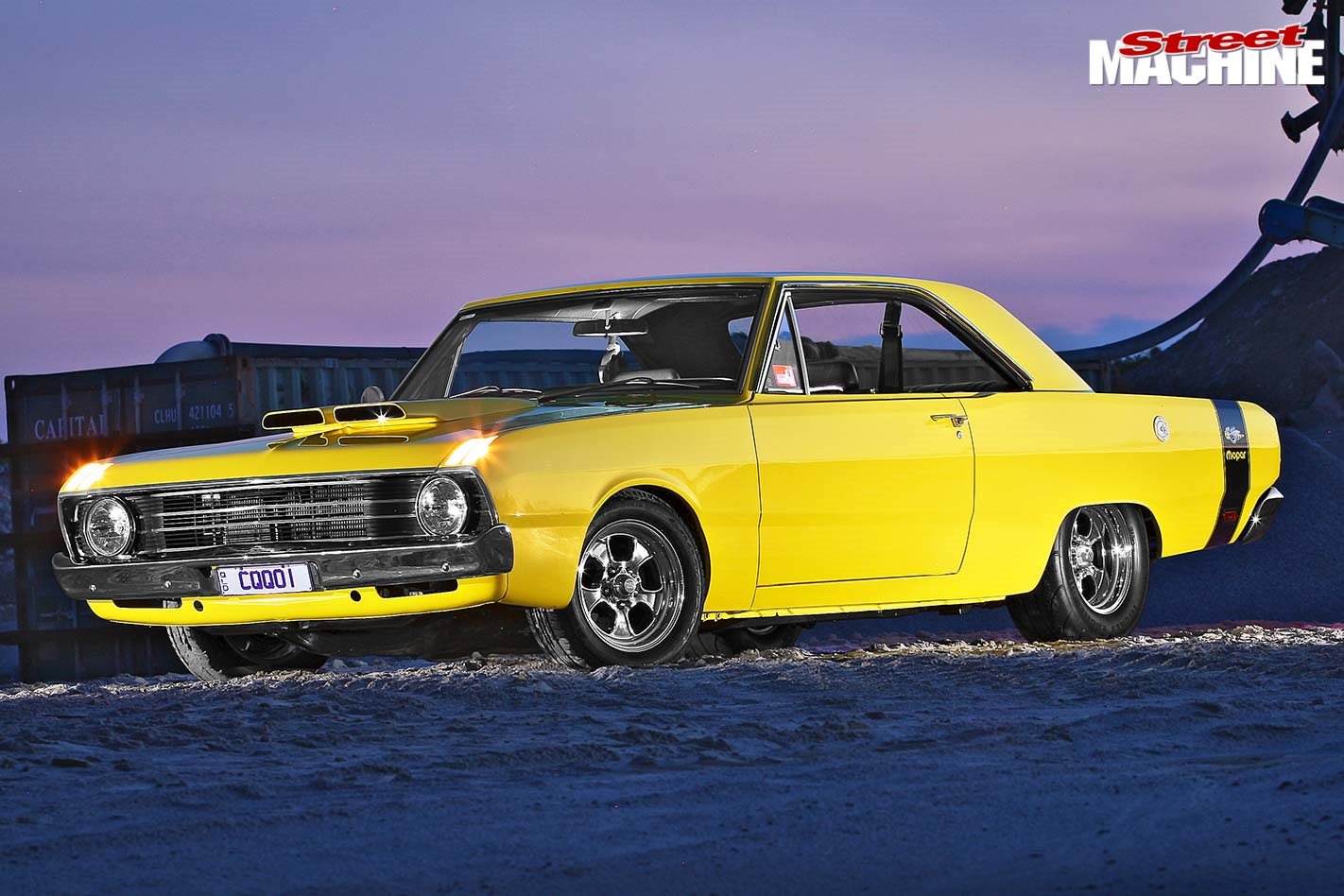 American Racing 15in Hopster rims add some bling but keep the proportions under control. US Dart tail-lamps are a bolt-in swap, while offset rear spring hangers mount the 9in and improve tyre clearance

Brisbane’s Hilda Down had no problems getting it right. A love of the Mopar marque and respect for the factory styling has helped her to build one of the cleanest and best proportioned Valiant street cars we’ve seen in a long time.

“I’ve always loved the lines of the two-door,” she says. “They’re without question the sexiest looking Vals you can get. My husband Tim and I are Chrysler fans and I was getting bored with a Corolla daily, so in 2007 we started to hunt for something cooler.”

The internet led them to Canberra and a phantom build VF Pacer coupe. “It was running a slant six on straight gas, which I thought would make it great for a daily, and it looked tidy in white with Pacer stripes.”

After studying a heap of photos they took the plunge — $7K changed hands and the coupe was sent north. “It drove really well and had nice paint but the body prep let it down. It was definitely a 20-footer.”

The coupe was driven as-bought for six months while Hilda hatched plans for a serious makeover.

“I really wanted it to stand out. They never made legit VF Pacer Hardtops so I decided early on to lose the blackouts and instead use a vibrant colour to give it the ‘punch’ of the factory US Chryslers and Plymouths back in the 60s.”

The body was stripped, then prepped and painted by family friend Cel Gold. Cel’s an old-school craftsman and knocked the virtually rust-free shell straight but left it stock apart from shaving excess badges from the bonnet and boot.

The paint is a secret brew but Cel stirred in a splash of orange pearl to add even more zing to the retina-searing yellow two-pack. The black bumblebee stripe pay homages to mother Mopar. 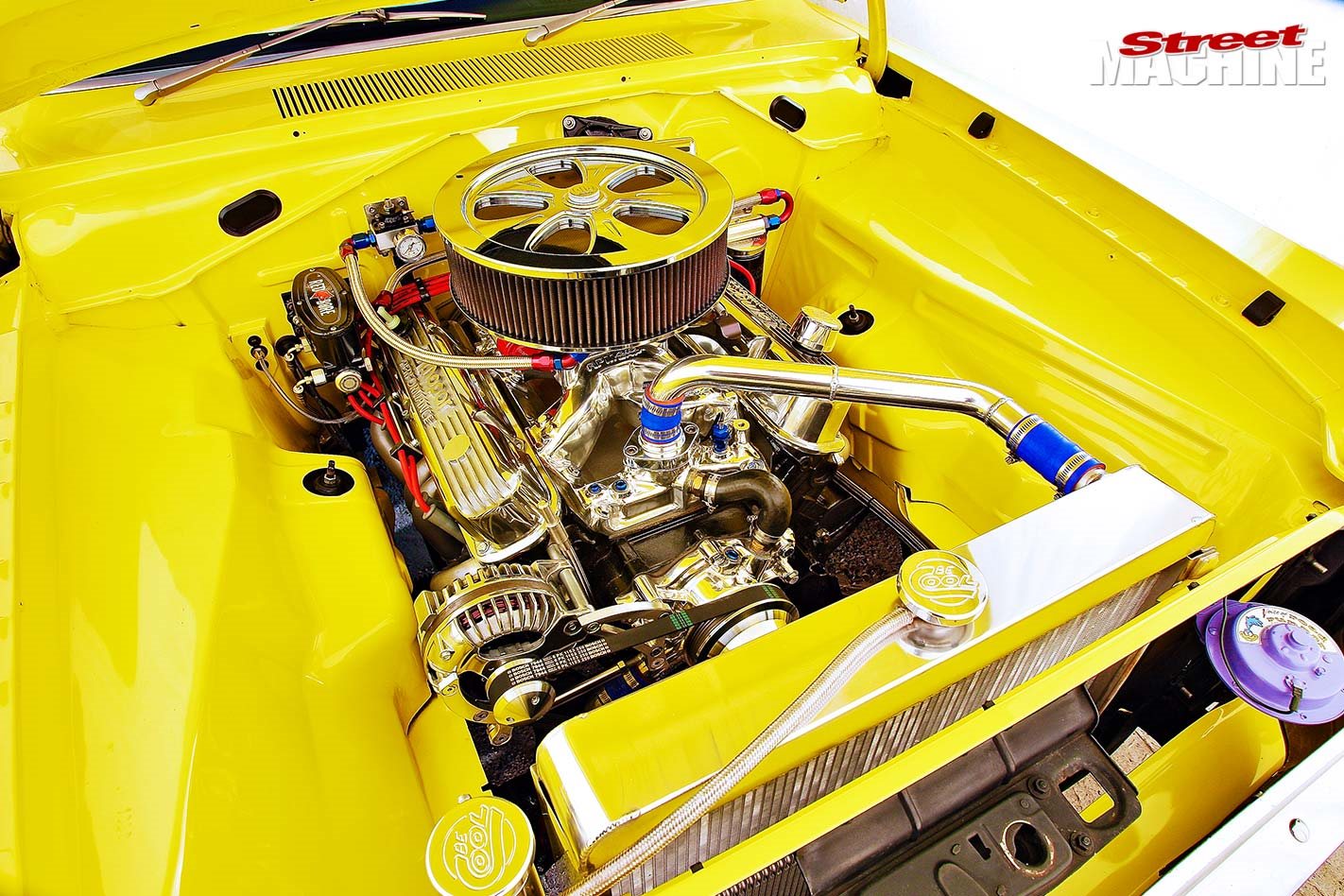 The 415ci small-block runs an Edelbrock water pump and an Aussie Desert Cooler alloy radiator and features a K&N air cleaner and hidden wiring. The birdcage alternator and Road Runner horn (yes, it sounds like the cartoon bird) continue the factory muscle theme

The factory muscle theme continues inside, with a black buffalo-grain Regal interior replacing later-model buckets and tatty door trims. The only modern appointments are the Billet Specialities twirler and a range of Auto Meter and Mopar Performance gauges.

The Hardtop returned to the street still running the original slant donk and rolling on a set of Weld Rodlites earmarked for Tim’s Plymouth Signet but it wasn’t long before Hilda felt the urge to bring the rest of the car up to scratch.

“We’d skipped the engine bay on the original build to keep it mobile but the bigger picture had always included a V8 driveline and different wheels. I really wanted the engine bay tidy, so the slant was pulled and the car went back to Cel.”

Son-in-law Dean Villani handled the electrical work, including hidden engine bay wiring, and also stepped up for the custom fabrication required in the build.

John Goodelis at Logan Specialised Engineering sorted the new donk. A 360-cube small-block is a great start but John stretched it to 415ci with a four-inch Scat crank and matching rods, plus JE custom forged pistons. Heads are Chrysler factory J castings that were ported and polished and fitted with Ferrea valves and Comp springs and retainers.

Comp also supplied the 0.462in lift hydraulic cam and lifters which bump chrome-moly pushrods and Crane rockers. Oil lives in a Milodon sump and is kept flowing by a Mellings high-volume pump. An MSD Pro Billet distributor is hooked to a Crane Hi-6 ignition, while March pulleys keep the vitals spinning. 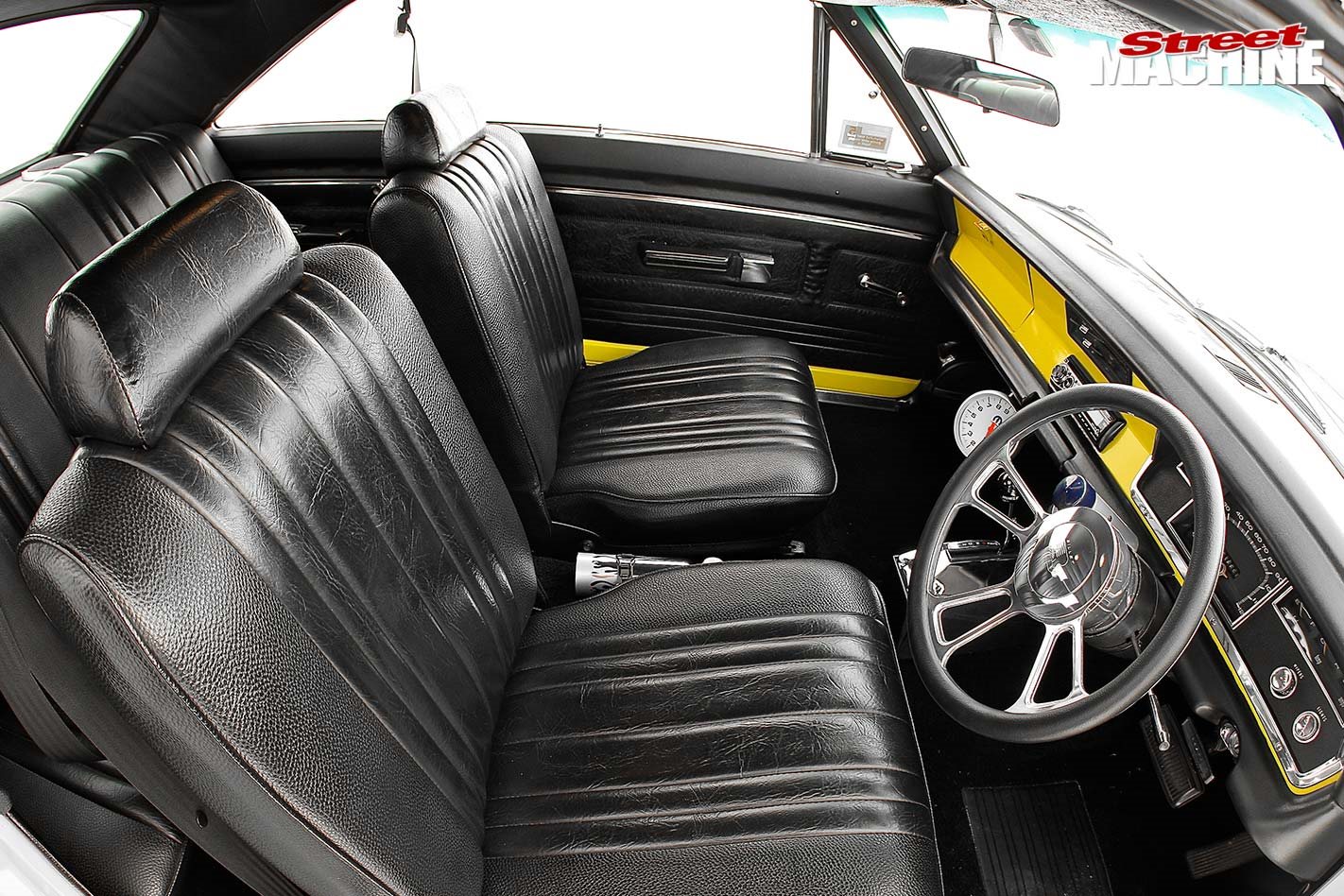 Inside is mostly stock, featuring a full buffalo-grain Regal interior. A Billet Specialities tiller ties in with the rolling stock and air cleaner; vitals are monitored using Auto Meter and Mopar Performance gauges

A Holley 750 and Edelbrock Air Gap intake complete the engine, and power heads rearwards via a Precise Automatics 727 Torqueflite packing a Cheetah valvebody and a Taipan 3500 converter. The exhaust is a mandrel-bent twin 2½in system fronted by a set of four-into-ones but will soon be replaced by a custom set of straws.

The underside was beefed up to suit — braced lower control arms, tubular upper arms and a rack and pinion conversion tame the front; chassis connectors run to a shortened nine-inch with 3.5 gears and Yukon 28-spline axles out back. A Mopar Performance offset rear hanger kit makes room for 255/60 rear boots on 15x8 American Racing Hopsters, while skinnier 185s wrap 6in rims up front. A healthy lowering job nailed the stance, and brakes are a mix of drilled late-model discs and standard rear drums, all activated by a Redbore master cylinder.

Three years on and the Hardtop is all but finished, though it’s still not a daily.

“It came out much better than we expected so we bought a 300C for everyday use,” Hilda explains. But the coupe wasn’t mothballed and has clocked up plenty of street miles — and its fair share of awards, including Top Coupe, Top Engine Bay and Best Modified at Mopar Sunday 2011, plus Top Paint and 2nd Best Coupe at the recent Chrysler Expo.

With the final build price a smidge over $35,000 including purchase, this is the perfect example of a well-planned, tough and affordable classic that can hold its own in the street, race and show arenas.