Johnny Ielati has continually developed and refined his 1975 Ford XW Fairmont over 20 years. This is his latest version, a street-friendly 393ci Windsor with a C4 and nine-inch

WHEN Johnny Ielati debuted the latest incarnation of his immaculate 1970 XW Fairmont at this year’s WA Hot Rod & Street Machine Spectacular, for him it was a double triumph. It not only marked 10 years since he was diagnosed with a rare form of cancer, which he’d since beaten, but also two decades spent evolving and honing his classic Ford. “The XW is my very first car; I bought it about a month after I got my licence in 1996,” Johnny explains. “I was always going to have an XY or an XW, as my dad always talked about an XW that he had when he was young, and he still has an XY that he bought in 1988. I remember holding the gearbox up while he dropped an engine into the XY when I was 10. Those memories get impregnated in your brain; you don’t forget that stuff.”

The XW Fairmont was a Starlight Blue six-banger, but it didn’t take long before Johnny changed the original wheels for a set of Bathurst Globes and swapped the 221ci motor for a 250ci six-pot with a 2V head. A few short years later, the XW underwent its first major transformation, with most of the work taking place in Johnny’s dad’s garage. His uncle Tony took care of the panelwork before the car was resprayed in Acid Rush from the late-model Falcon colour charts. The 250ci six was swapped out for a 351 Windsor, and backed up by a Top Loader and nine-inch. The interior was retrimmed in white vinyl and decked out with a big stereo and Auto Meter gauges. Johnny also purchased a set of 18-inch Intro V-Rod wheels to complete the ‘tough street’ look he was aiming for.

6
Johnny wanted a set of wheels that were more cutting-edge than his previous Intros. The Billet Specialties Street Lites look the goods, measuring in at 17x7 front and 15x10 rear with double beadlocks added for extra toughness

He was gunning to have the XW ready for his wedding in 2005, but unfortunately he missed the deadline. Then in June 2006, with the car in the final stages of the build, Johnny received his cancer diagnosis. “I wasn’t able to work on the car or at my job for a while,” he says. “I went through a really tough mental battle during the recovery process. Such a life-altering situation really plays on your mind. I was lucky though, as two years earlier there was no such operation for the cancer that I had, so things could have turned out very differently.”

6
Under the bonnet the 393ci Windsor is making a very streetable 470hp, with Johnny chasing reliability over mega-power

With Johnny’s recovery looking positive, his dad bought him his own shed so he could move everything back home and continue where he left off with the Farimont. With all the major hurdles already taken care of before the cancer struck, all that was left to do was the final assembly, and by the end of 2007 the XW was back on the road again. 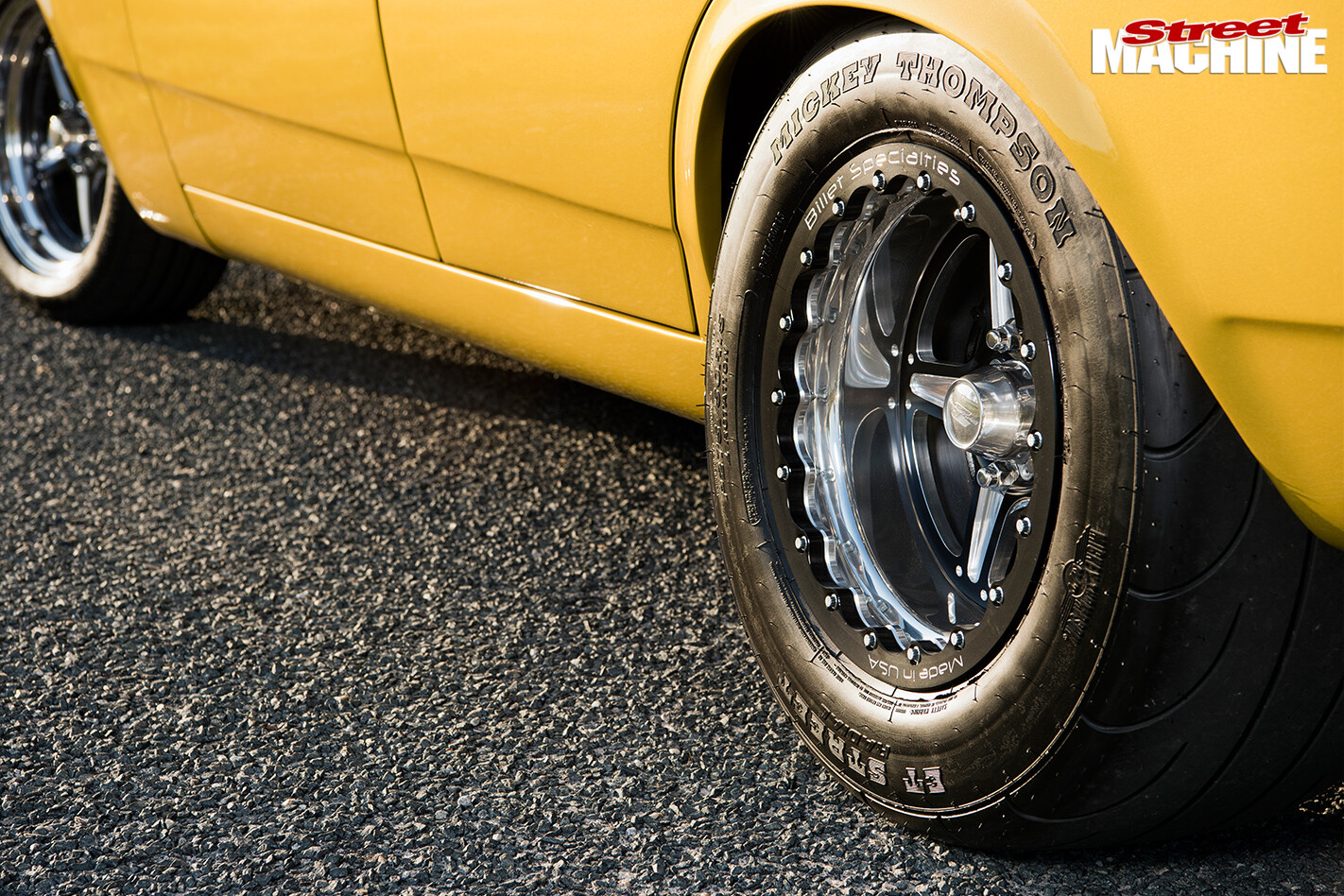 Johnny told himself he was happy with the car for about five years, before he decided to sit down and really consider what he’d like to do with it. “To be honest, I kind of just did ‘whatever’ when I built it the first time,” he admits. “I was never really happy with the way it ran either, and I hardly drove it because it was such a pain in the arse! It never idled right, never ran right and I didn’t really know what was in the engine. I regretted putting the manual gearbox in too – I wished I had stayed with an auto.”

So Johnny took the 351 Windsor to Tony Ierace at Ierace Automotive, with instructions to build a motor that would start, idle and drive nicely, with reliability being the core focus. After discovering a few problems with the block, a virgin-bore 351 Windsor block was sourced and machined to accept a Scat 393ci stroker crank, Scat rods and SRP forged pistons. A Crow hydraulic cam also went in and a pair of 195cc Dart alloy heads were bolted up and matched to an Edelbrock intake manifold. The 750 Holley carb on top is fed a diet of 98-octane through a host of Aeroflow fittings and fuel lines, which run back to a Holley fuel pump. An MSD ignition system gets the spark happening, while a set of Hurricane 17/8-inch headers expel the hot stuff.

6
The inside remains true to the original styling, albeit with some tasefully appointed hardware and a few custom touches thrown into the mix

The Top Loader was binned and replaced with a TCI Streetfighter C4 shipped over from the US, matched to a 3000rpm Dominator torque converter. The nine-inch was sent to Phil Purser at Final Drive to fit a street-friendly set of 3.5:1 gears.

The car rides on King leaf springs in the rear along with Koni adjustable shocks, with XYZ coil-overs fitted up front for their adjustability. A set of 280mm Wilwood rotors with matching Wilwood calipers provide the stopping power. Those Intro wheels from the first build have been replaced with a more up-to-date set of Billet Specialties Street Lites, with 17x7in fronts, and, interestingly, 15x10in rears shod in 275/50 Mickey T rubber, giving the XW a tough, staggered stance. Clint DiGiovanni at SRM handcrafted a full-steel reverse-cowl bonnet, raising the original bonnet skin to keep the lines intact and adding in sheet metal to fill the sides. The bonnet was then delivered, along with the rest of the car, to Joe at Kustom Panel & Paint, where the Acid Rush was freshened up and finished off to a show-worthy quality.

Johnny re-trimmed the dash in black macro-suede, flattening out the standard XW gauge cluster and re-fitting the Auto Meter gauges. New loop-pile carpet was installed and the seats were bolted back in, with the white trim from the first build still good enough to make the cut. A Billet Specialties Street Lite steering wheel takes pride of place, with same-brand pedals and window winders providing the finishing touches. 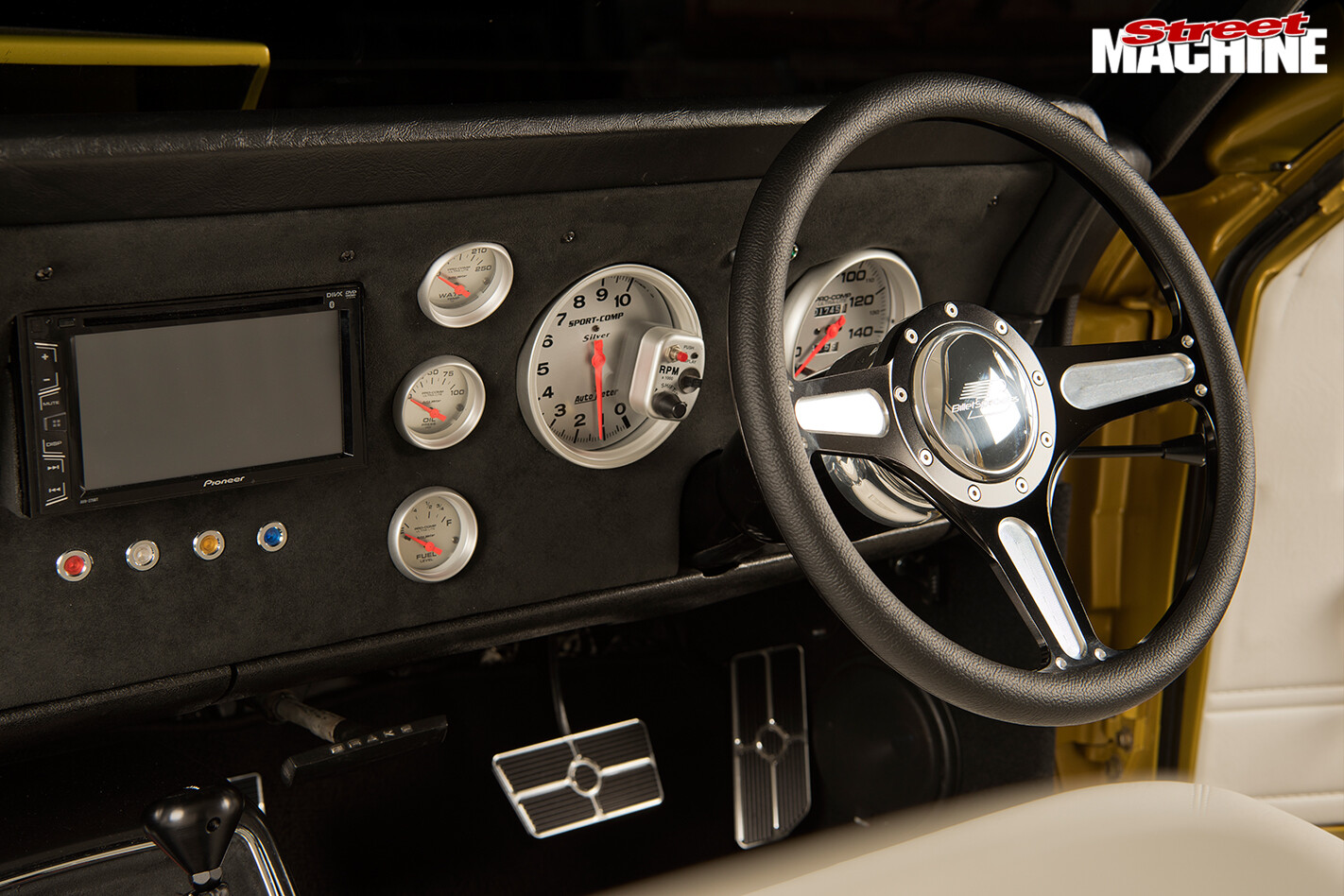 With one week left before the XW’s debut, Johnny decided that it just needed something else to make it stand out from the crowd. “The first time I saw the XW in the sun with all the brightwork fitted, I decided the colour just wasn’t working. It was so overpowering, so I wanted to do something to break it up,” he explains. “I’ve always liked the original cars that came with a factory white roof, so I thought, why not try that with the car? I had picked out a gloss white vinyl wrap, and at the last minute we changed it to a satin white, which turned out to be a good move. That was put on the car the night before the Hot Rod & Street Machine Spectacular, so we were cutting it pretty fine!”

6
The window winders are tiller and Billet Specialties items, with the design of the latter matching the Street Lite wheels

Johnny’s efforts didn’t go unnoticed at the show either, with the clean XW winning Top Street Machine – Sedan and pulling crowds all weekend.

“It was a really great way to mark the 10 years since I was first diagnosed with cancer,” Johnny says. “I hadn’t planned it that way, but it was nice to mark the occasion by debuting the new build. “Maybe in another 10 years’ time I’ll change it up again too. As I’ve discovered, you get older and you see things differently, you evolve. I want the car to evolve too, and as I learn new things I want to be able to apply them and just keep getting bigger and better. I have such fond memories of working on cars with my dad when I was young; I hope to get my son involved so I can share the same thing with him.”

If Johnny’s story is anything to go by, I think it’s pretty safe to say there’ll be a tidy XY/XW Falcon in his son’s future!