MOST young street machiners don’t get their hands on the spanners until their mid-to-late teens, even early 20s. Rob Vella was well ahead of the curve; he’s owned this XY Falcon since he was a kid. “I was 11; I turned 12 about three or four weeks after I got it,” he says.

He went to a swap-meet with his uncle Mario and found the car there. The seller lived around the corner and they picked up the classic six-pot and three-on-the-tree sedan for just $450. 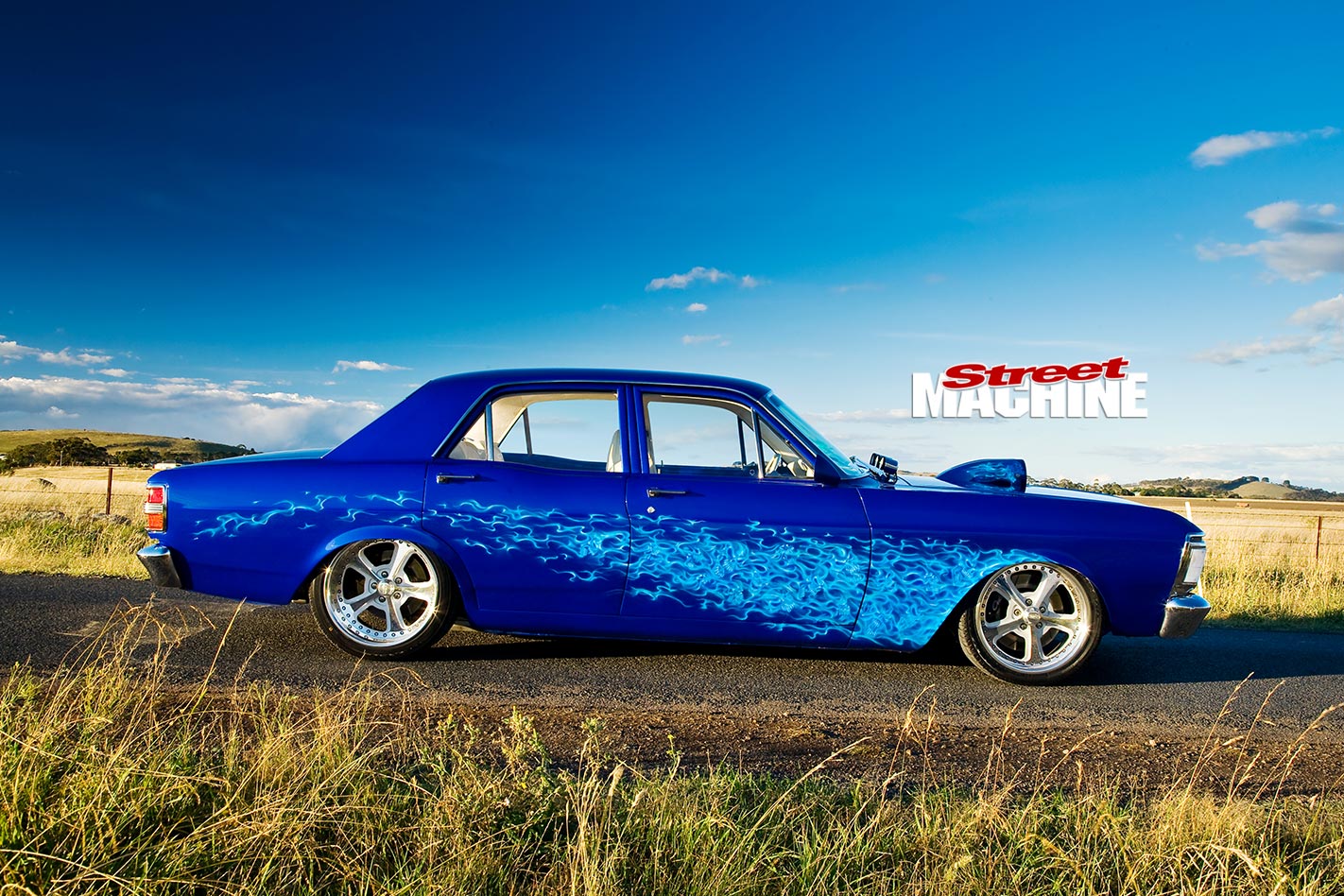 Rob is from a family of Ford fanatics — his dad had a yellow XY GT and his uncle owns a ’70 Mustang fastback and an XT GT.

“I’ve always been playing with cars and I just wanted to start off early; I thought I’d build up something slowly,” he says. 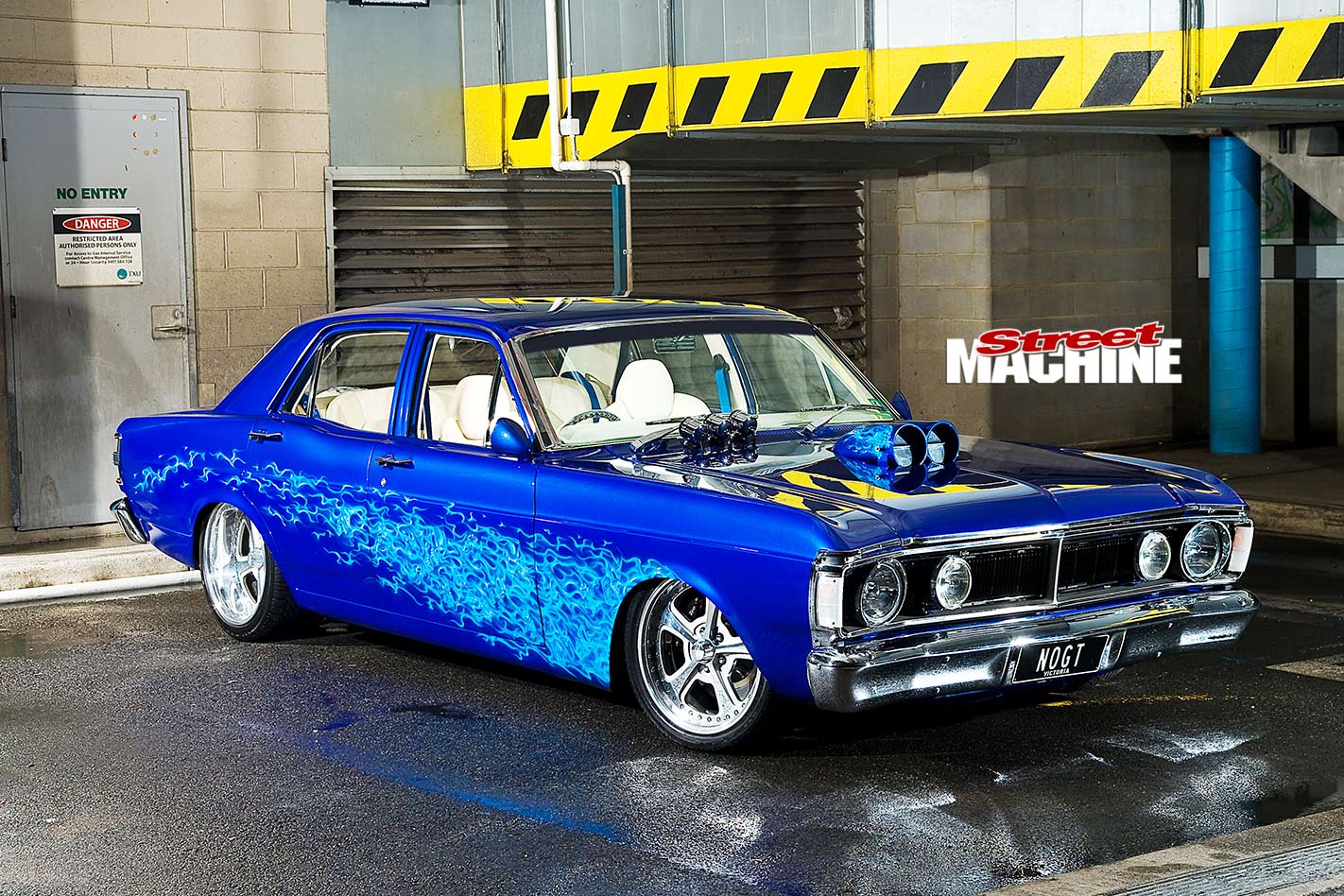 With his dad and his uncle by his side, Rob learned the ropes, building up a sweet streeter over the next seven years. He wasn’t after a rampaging V8, just a cool cruiser with a bit of go, so they converted the true blue Falcon 500 into a funky GS replica.

“It was Moody Blue — like off the N15 Pulsars — and it had the GS stripes, a black and blue vinyl interior with a GT sort of theme and a stainless dash. I had a 250 2V with a Celica five-speed. I was a bit young, so I didn’t know exactly what I wanted.” 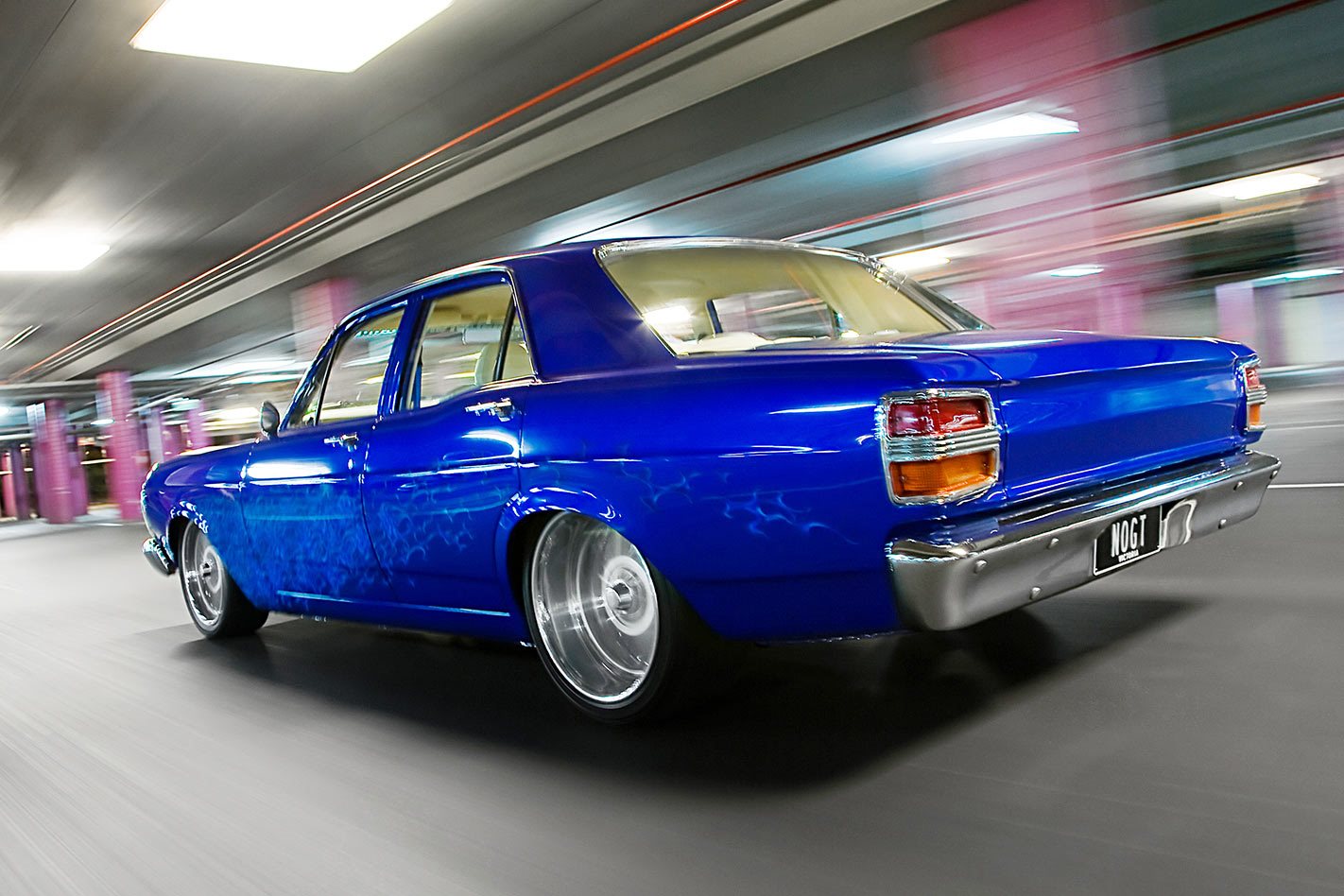 But after 12 months of driving, and smashing a few of the weak front universal joints in the five-speed conversion, he was ready to do it all again.

“After a year I got sick of the car; I wanted it better,” he says. Getting rejected from a Melbourne car show was another tipping point for the young revhead. 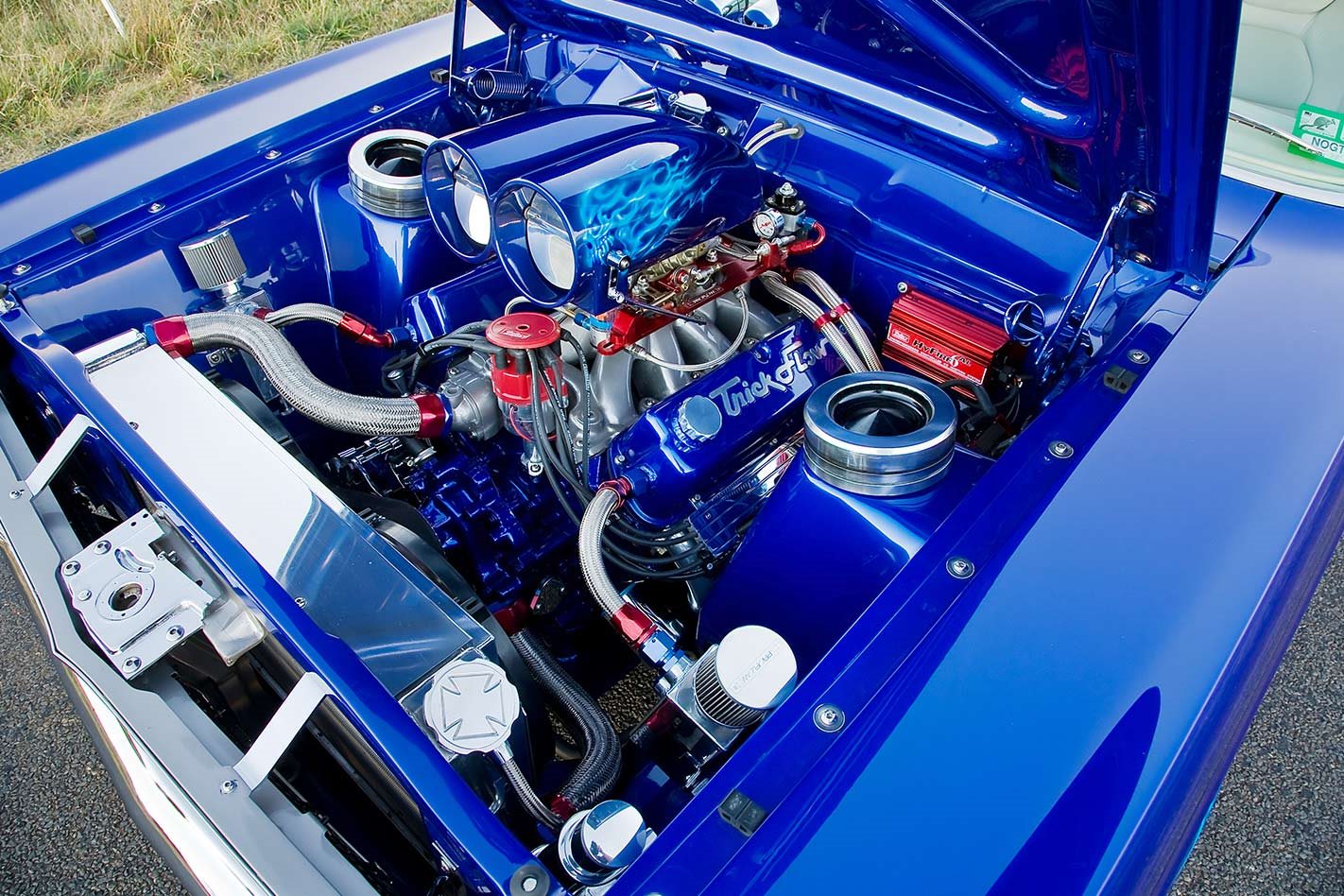 “We got kicked out of a show because our cars weren’t the right type. We had ’57 Chevs, Falcons and that sort of thing. When we got there it was like an import show. The next day I started stripping it.

“Dad came home and I had the car pretty much half-stripped. He was like: ‘What the f**k are you doing?’” Rob laughs. “I was going to put a 347 in it, and it just sort of snowballed. I thought I’d do it while I could. I was single, no debts, so I thought I’d go all-out because god knows when I could do it again.” 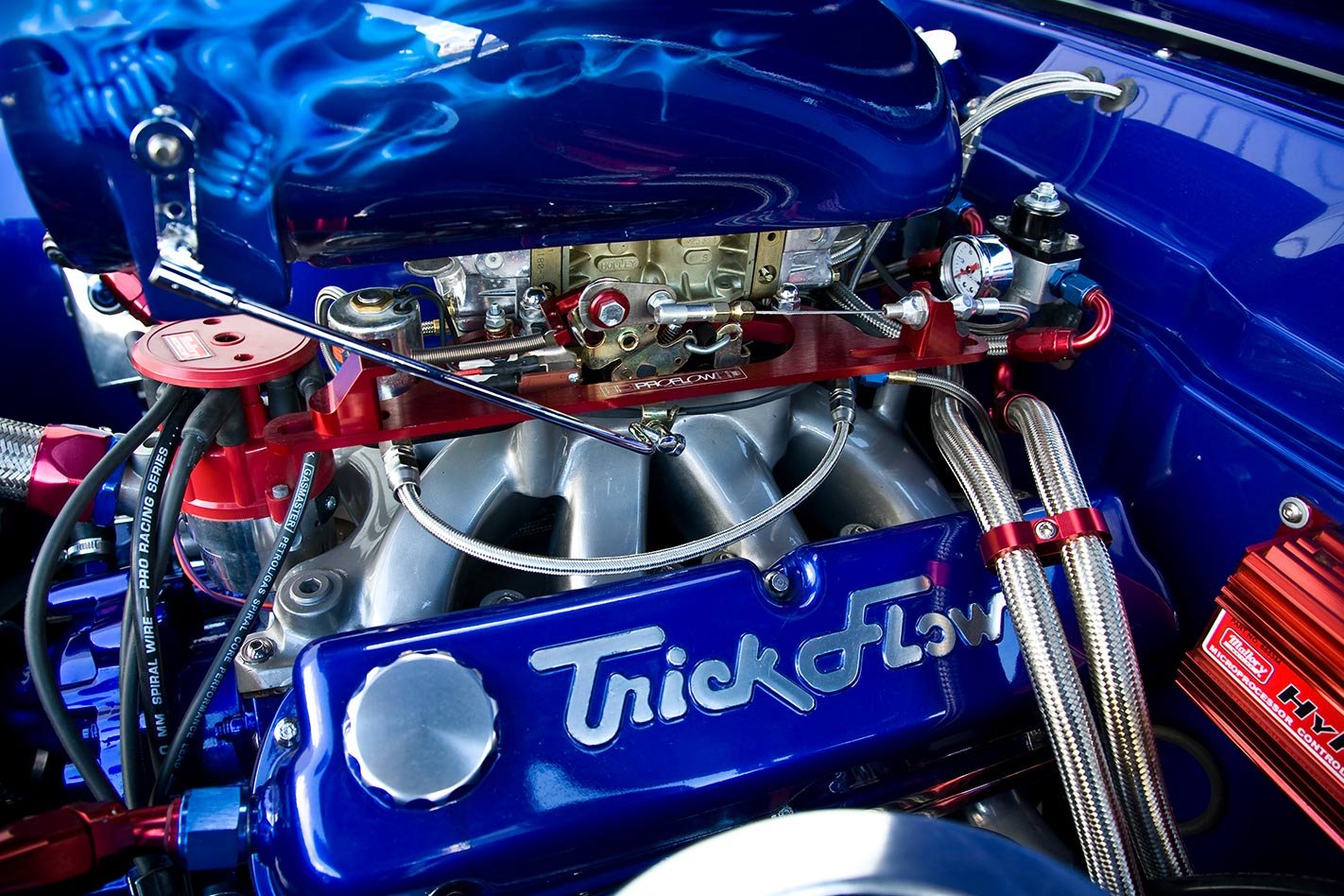 The first time they’d handled the body themselves, cutting the rust out of the tired shell and fitting new door skins but this time Rob wanted to go further.

“When we stripped it back, the only rust was a little bit in the wheelarch. I got my mate Brian to do the body — he’s a panel beater and has a black XW that’s straight as a die — so I thought I’d let him do it.” 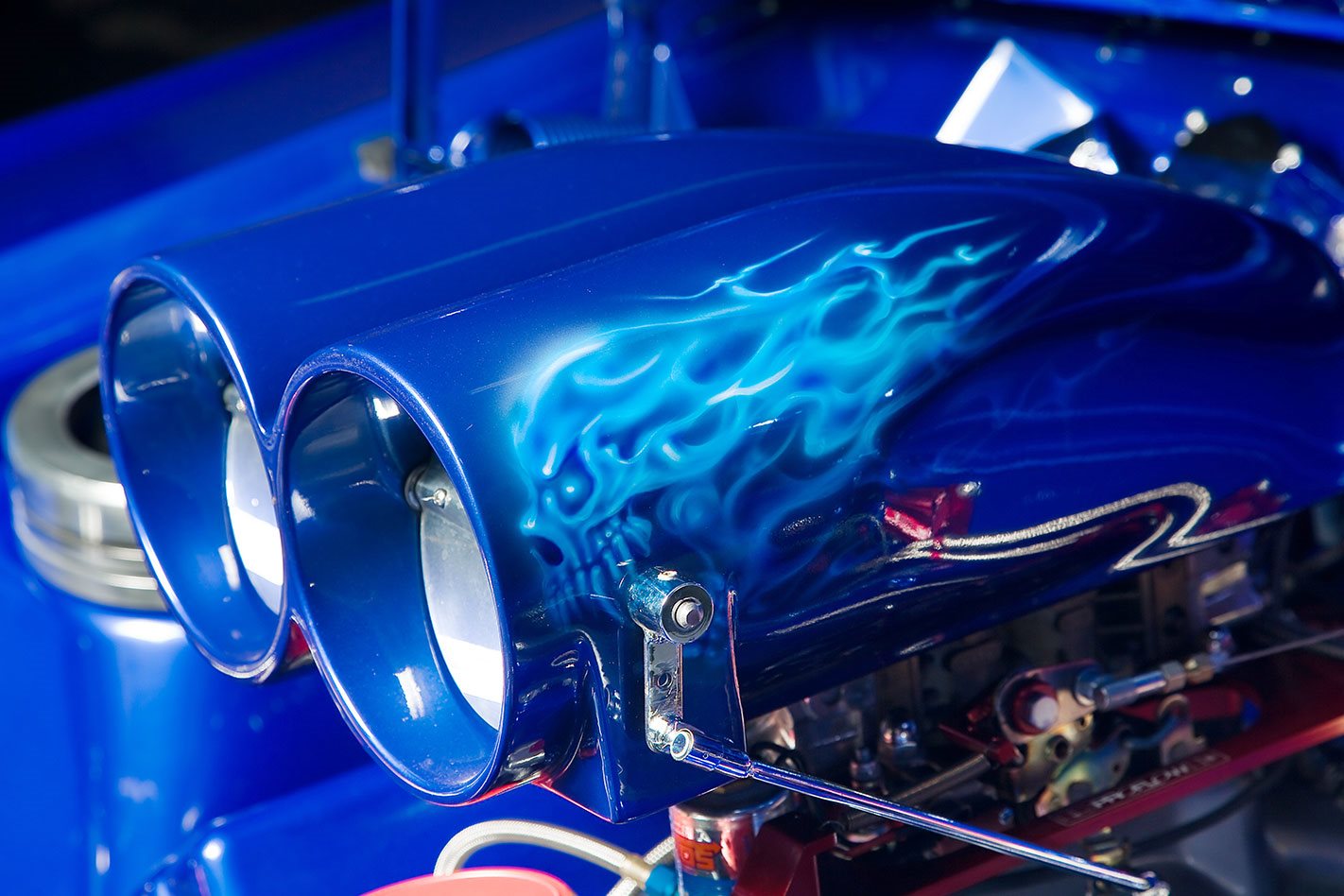 “I liked the style,” Rob says about the shotgun scoop. “I wanted alloy but all the alloy ones were twin carby at the time. I’m happy I didn’t get one now”

Not that Brian did everything. Rob and his dad hooked into the engine bay, smoothing it with a fake firewall and fresh sheet-metal on the inner guards. It was tubbed by Taverna Chassis, with the springs moved inboard to clear 18x10 Intro rims. 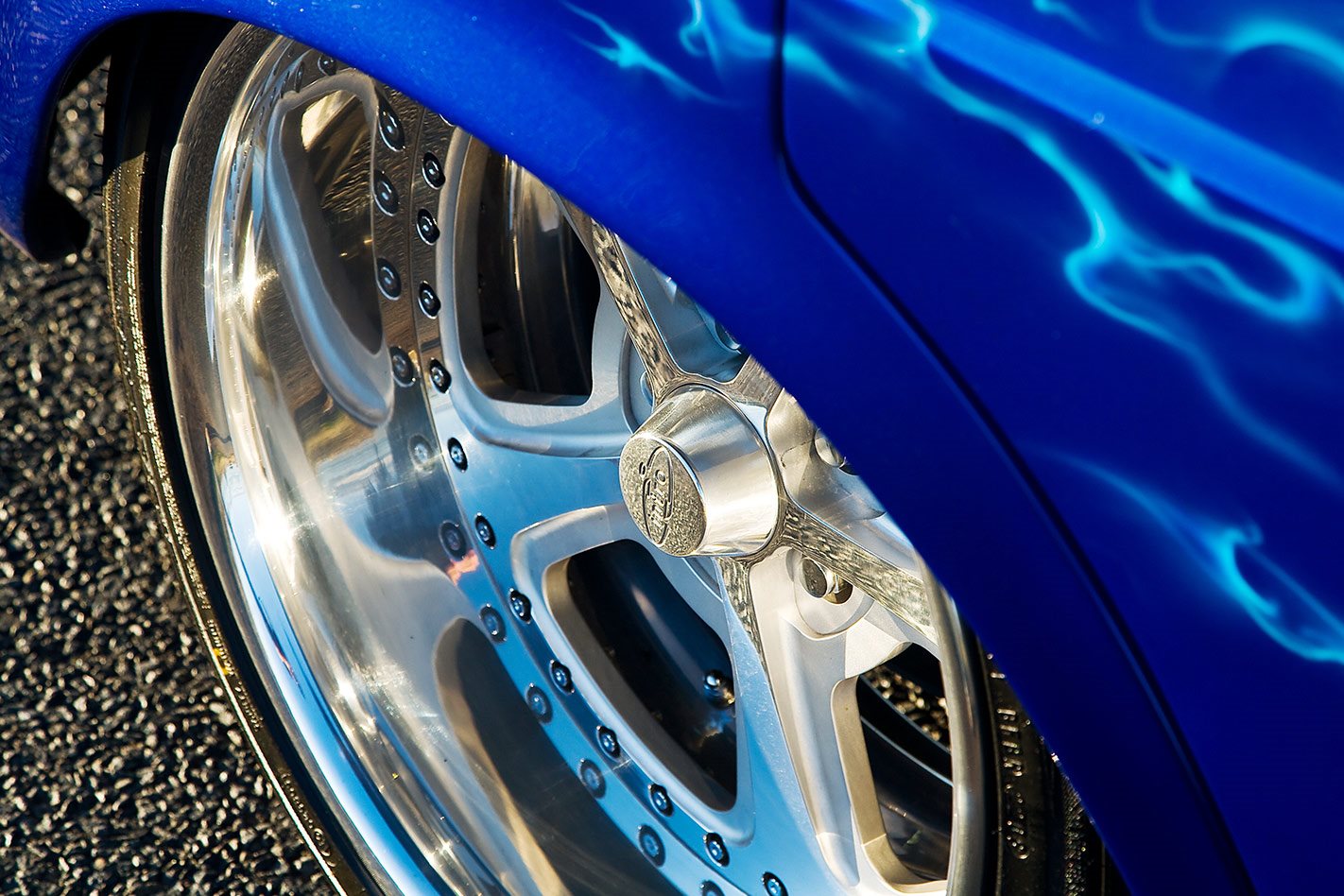 Once the panel gaps were set and all the unnecessary holes and moulds were removed, it was time for Chris from Aztec Smash Repairs to lay down some House Of Kolor Magik Blue. The vibrant hue certainly delivers the punch Rob was after but Mat Egan’s ‘true fire’ flames are a real knock-out. 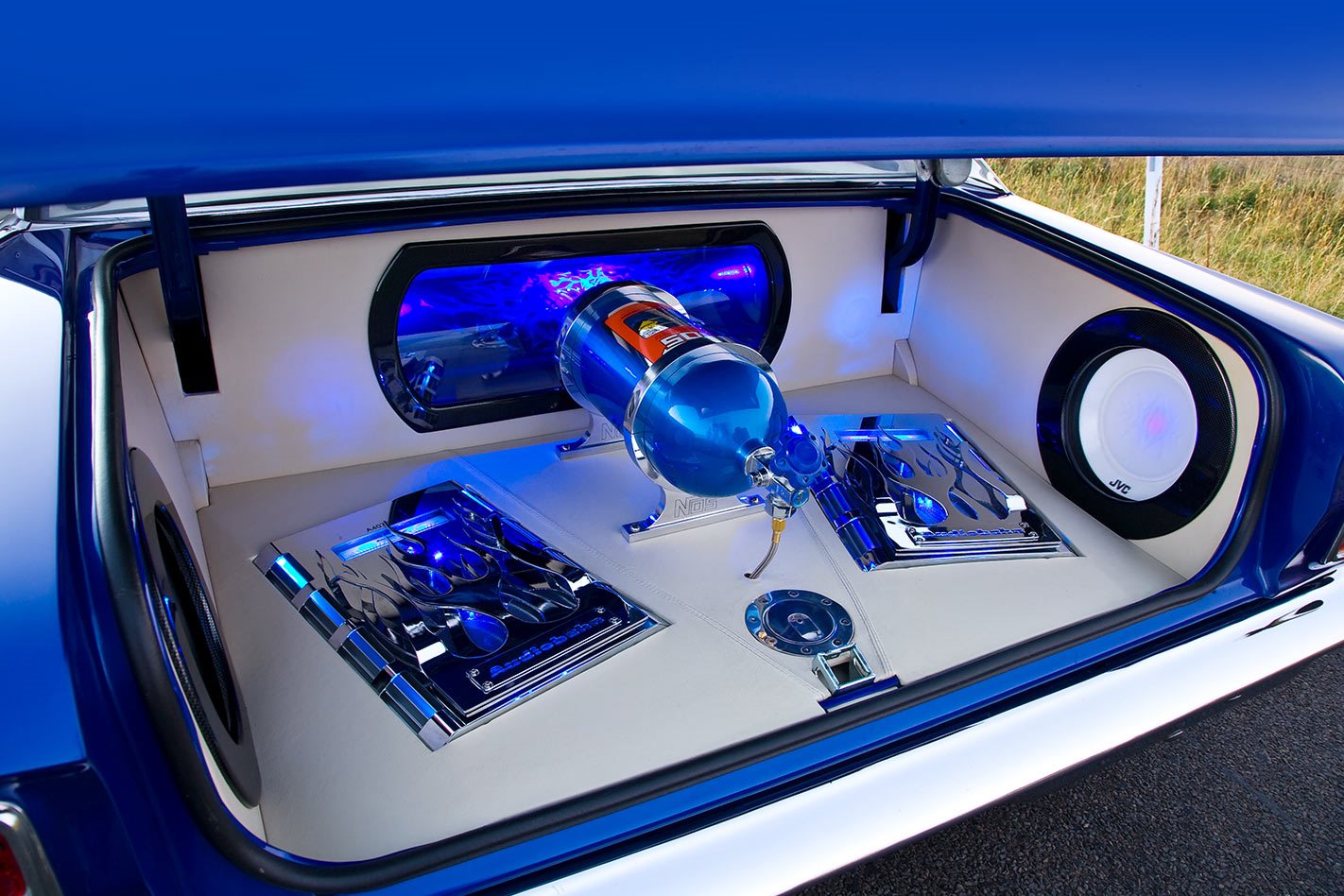 “To be honest, a lot of the stereo is there for looks — I don’t listen to it that much. Those amps cost me a fortune but I only got them because they’ve got the flames on them”

“I got the theme from Overhaulin’,” Robs says. “They did a van and the colour was very similar, with the light-blue true fire coming off a dragon. As soon as I saw it, I thought: ‘That’s what I want.’

“I’ve seen Matty do skulls and I said he could throw a skull in here and there to break it up. He ended up doing something like 17 skulls per side — he went a little bit nuts,” Rob laughs.
But it was exactly the kind of thing he was after; something different. 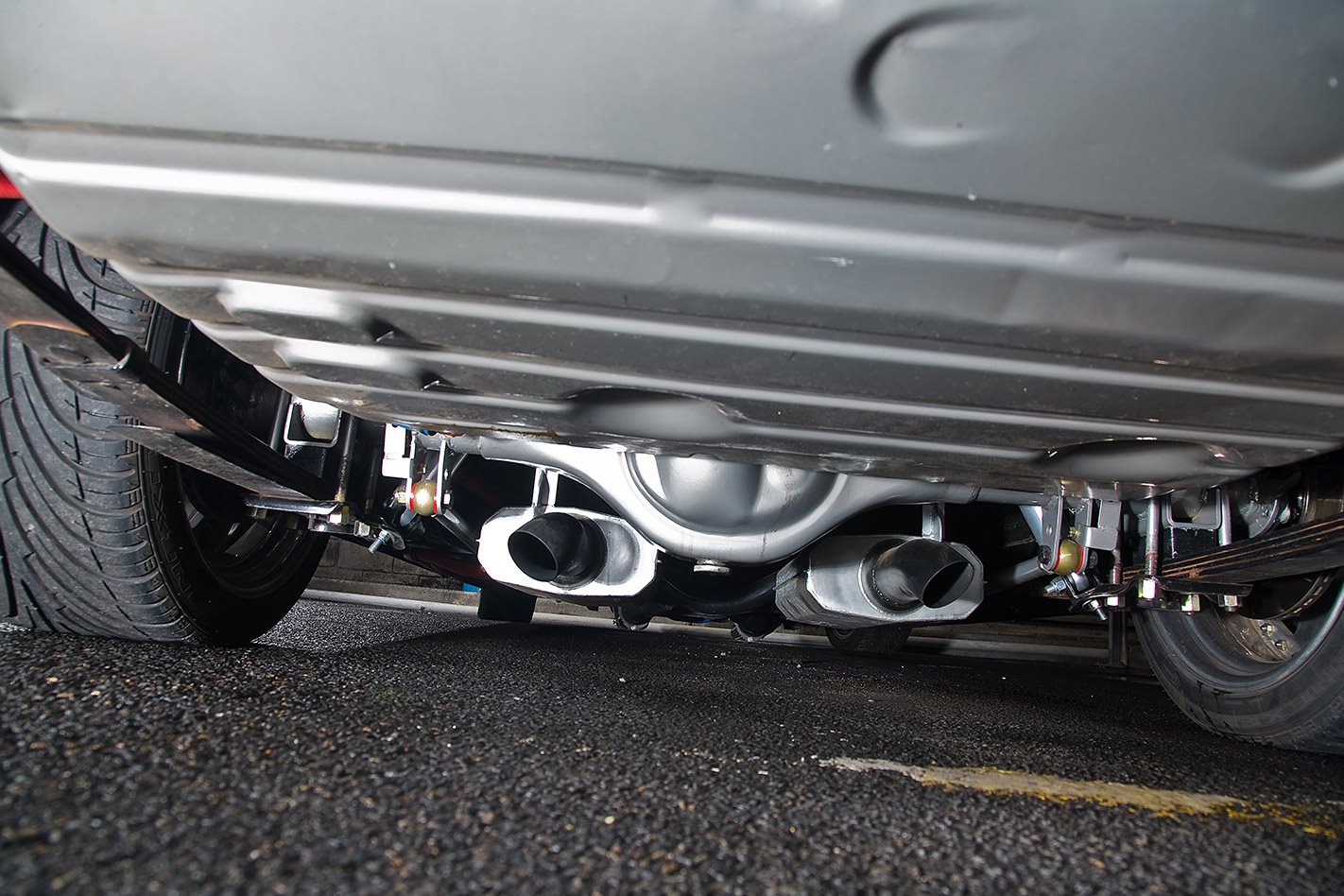 “When I did this, that was the biggest issue — I didn’t want anything like a GT. I’d go to the All Ford Days and there would be a million replicas. There’re a lot of really nice XYs getting around, but in one way or another they’ve always got a GT theme on them, with the interior or the stripes. I wanted something completely away from that.” 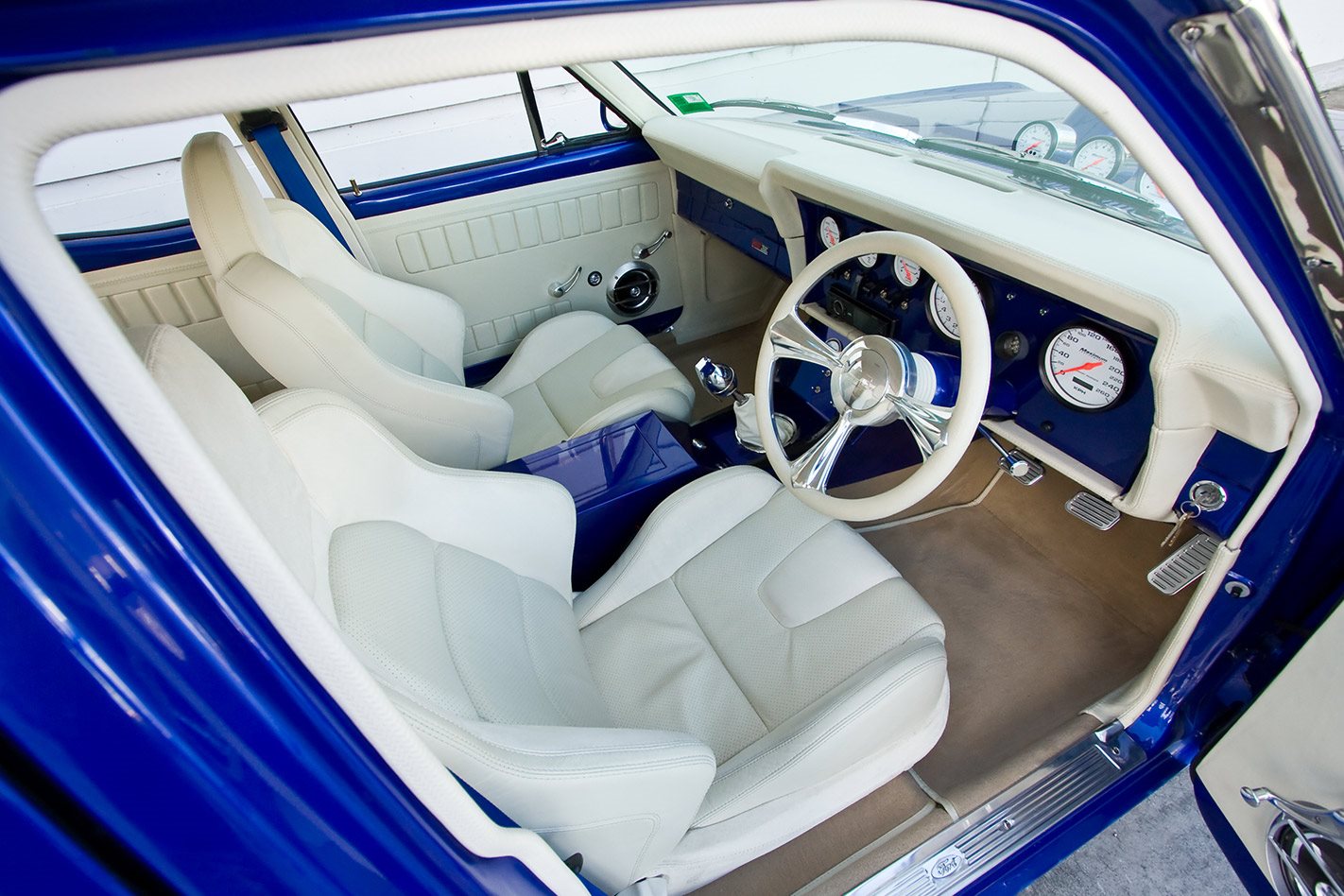 Trainspotters will point to the GT mirrors and driving lights but he shrugs that off: “I liked them.”

The powerplant’s got a lot more grunt than you’ll find in any factory GT. The original plan was for a simple 347ci combo but when he saw the problems his uncle was having with 40-year-old engines Rob went for a new Dart block.

So why not make it a tall-deck block that’ll handle some cubic inches? 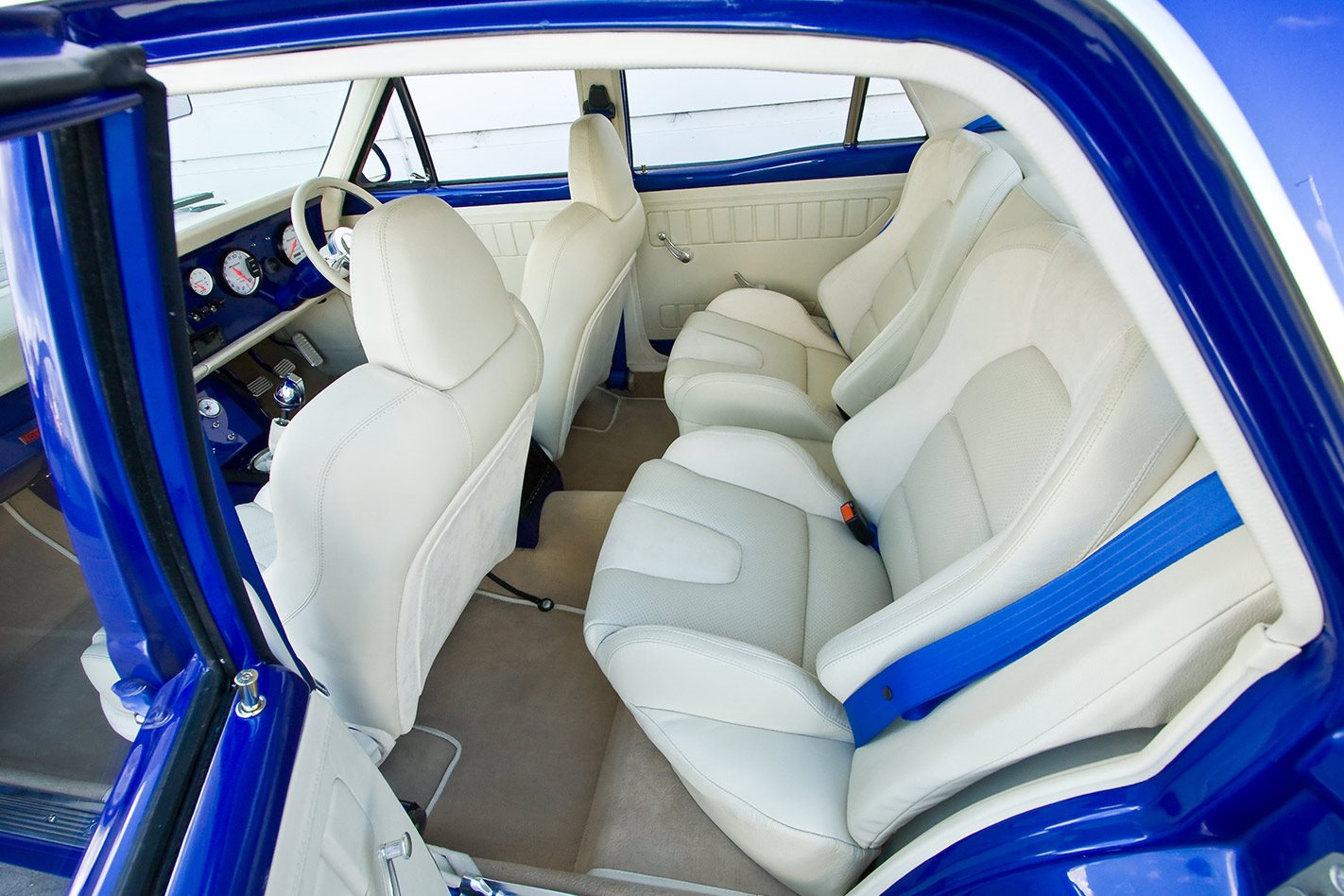 Bone leather and ivory suede adorn the interior. FPV GT-P front seats were installed, while a pair of GT-P squabs were integrated into the rear

A trained mechanic, Rob had the skills to slot together a healthy donk, and with his uncle lending a hand, they’ve unleashed a stout 427ci combo that Rob says should be good for around 650hp. 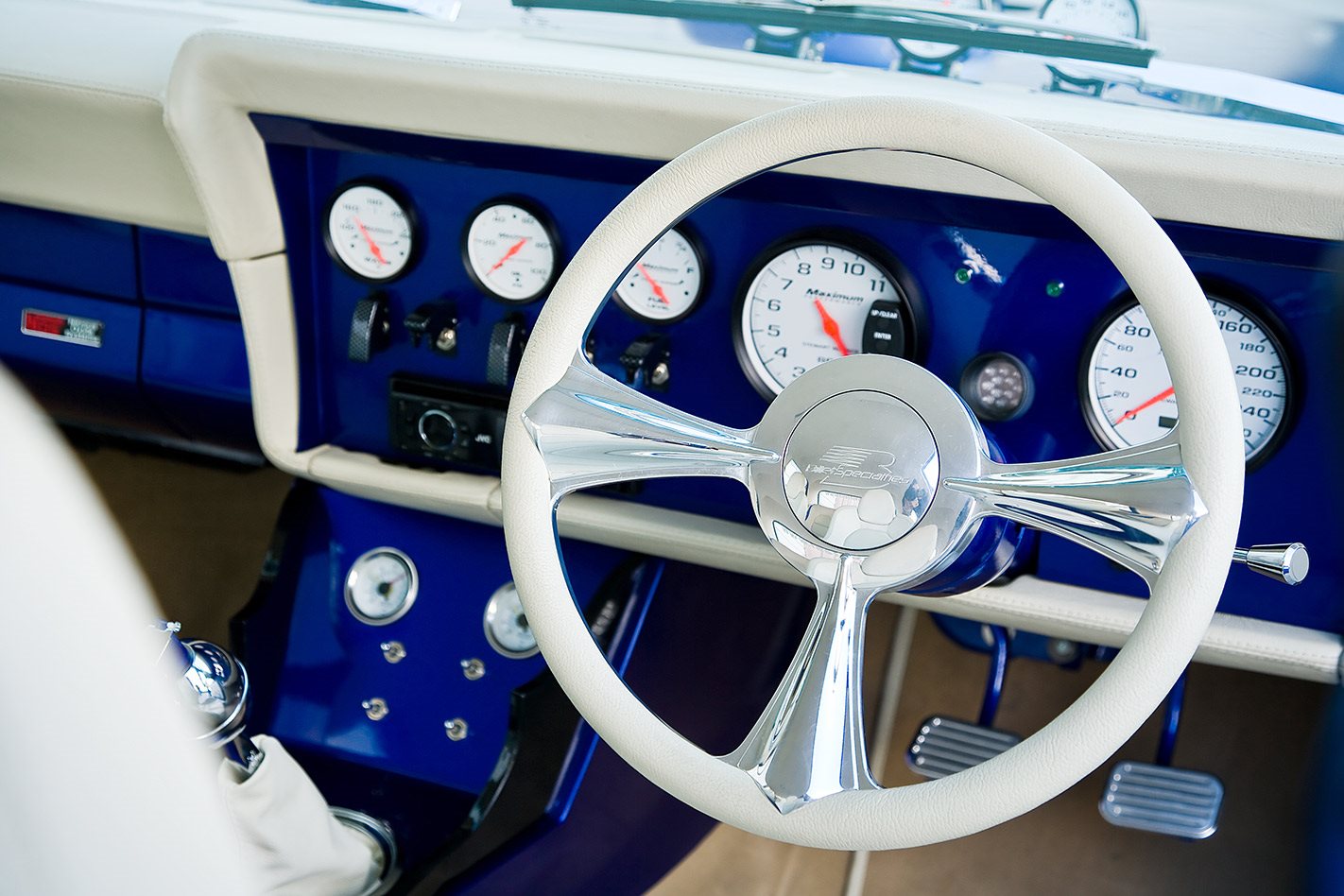 “A mate has a similar combo in an F100 and that’s made nearly 760hp at the fly,” Rob says. And there’s always the NOS Cheater system. Or there will be.

“It’s set at 150hp but there’s no nitrous in it. I haven’t used it yet; I’ve got to get the car tuned a bit and to be honest I’m a little scared. I’ve got to see how the car reacts without it first.”

With that much grunt on tap the Celica five-speed had to go; a Tremec TKO 600 and 31-spline nine-inch rear now make sure things don’t go awry. 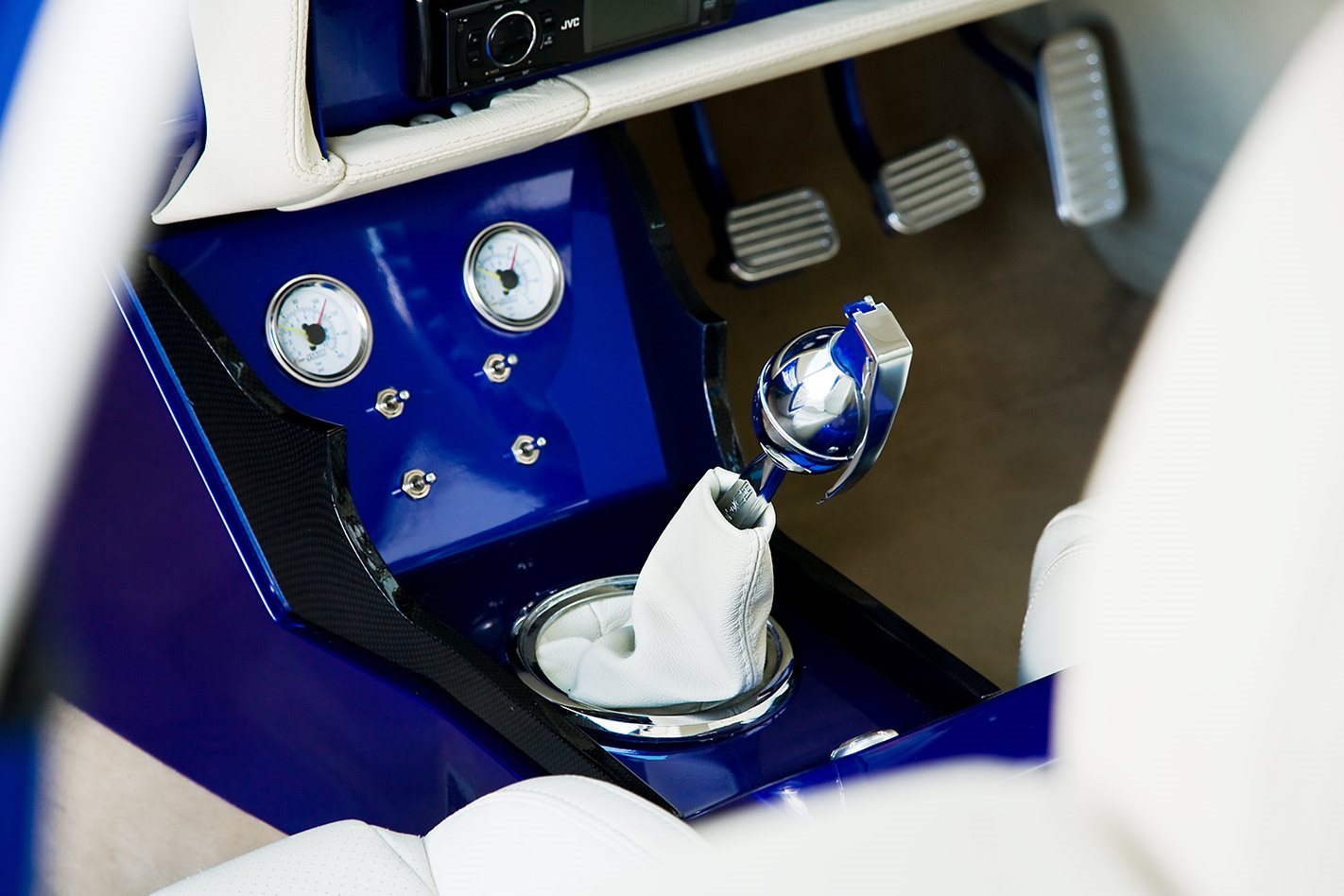 The way we tell it here, everything sounds pretty simple but this build has taken eight years, more than a few dollars, and plenty of choice words.

“Every single part we put on the car, nothing ever fit!” Rob laments. “No matter what it was, we ended up having to modify it in one way or another. You’d buy stuff that you’d thought would fit, and it didn’t.” 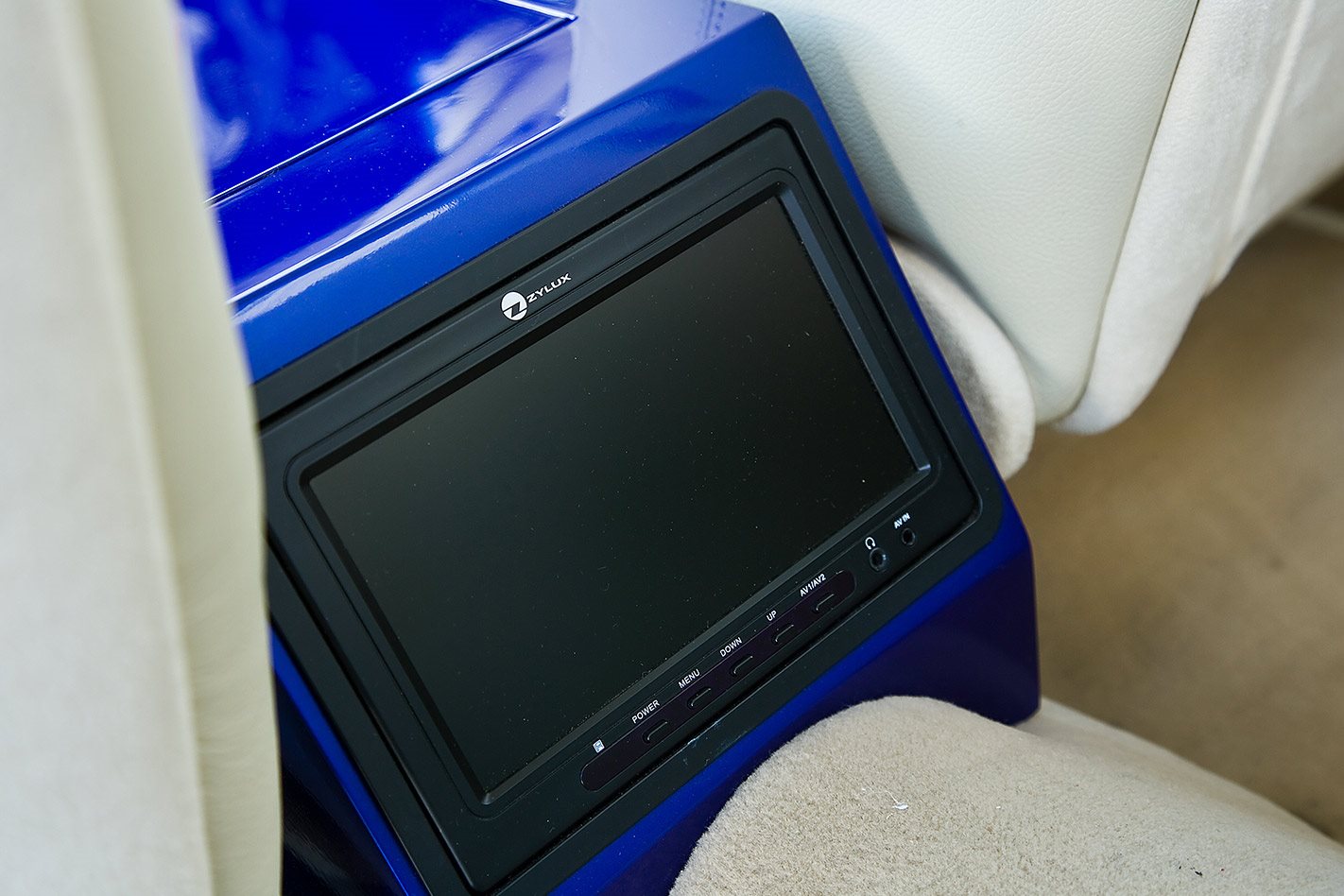 But with perseverance he’s just about got the Falcon to where he wants it.

“It’s been on the road for about four months but I try to take it out every weekend. I’ve done probably 2000km. I didn’t want this thing going on trailers, or sitting in the garage like a trophy. I built the car to drive and if it gets a stone chip or something, well that’s part and parcel of doing it. What do you do?” 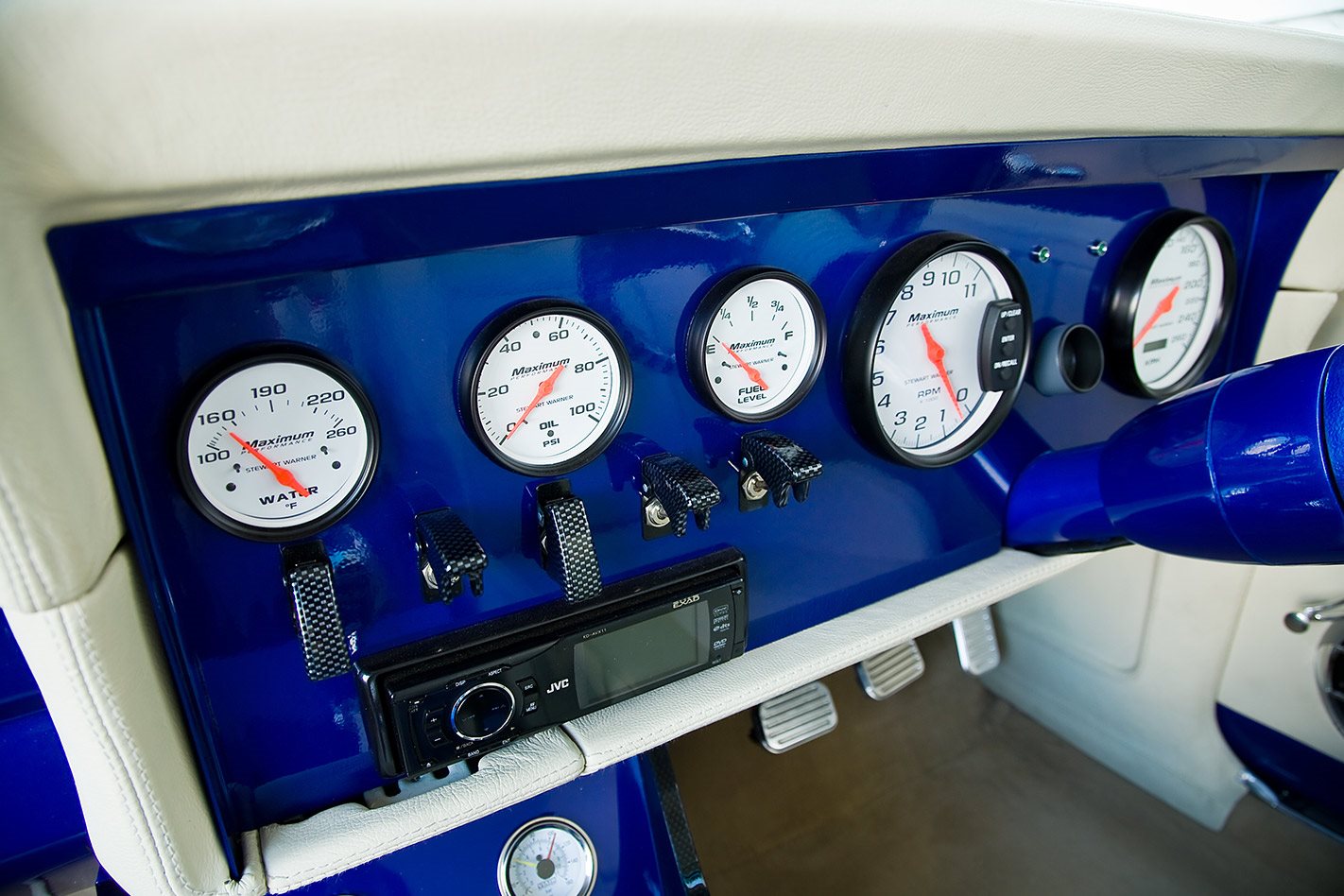 Incredibly, this is Rob’s first V8. He’s had hot sixes, and dabbled with some fast fours, but he’s jumped in the deep end with some serious V8 grunt.

“I’d never driven anything with this sort of power; I’m just getting used to it now.”