Long after it'd died a natural death, this Holden HG Monaro came back to life

Long after it'd died a natural death, this Holden HG Monaro came back to life

QUITE often where we list ‘condition when started’ on the Street Machine technical sheet, people write ‘basket case’. But seriously, folks — the stunning jet-black HG Monaro you’re drooling over now was what you might call — if you were being polite — rooted. Purchased off eBay, the owner took it straight to the boys at Classic Ridz on the Sunshine Coast in Queensland. 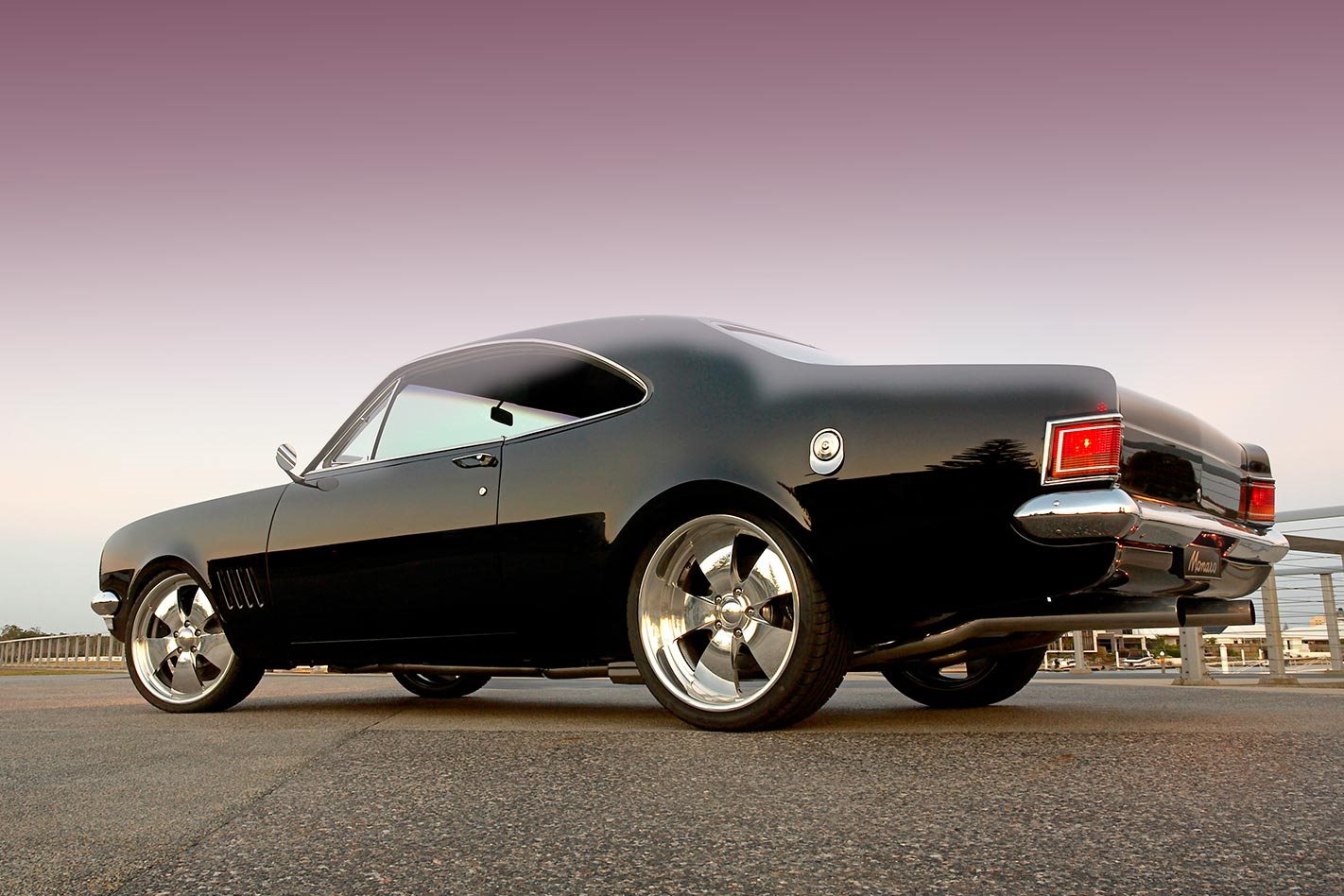 “Scott brought it in as a rusted-out six cylinder. It looked like it had been an artificial reef at some point in its life — it was so bad we advised him to go and find a better body,” says workshop manager Tony Sheridan.

Sending the body off to the sandblaster didn’t really help as it came back with more air in it than metal, but at least the rust was gone. Scott wasn’t fazed; he’d always wanted an HG Monaro and as bad as this one was, he figured it wasn’t worth spending the money and time finding another one. 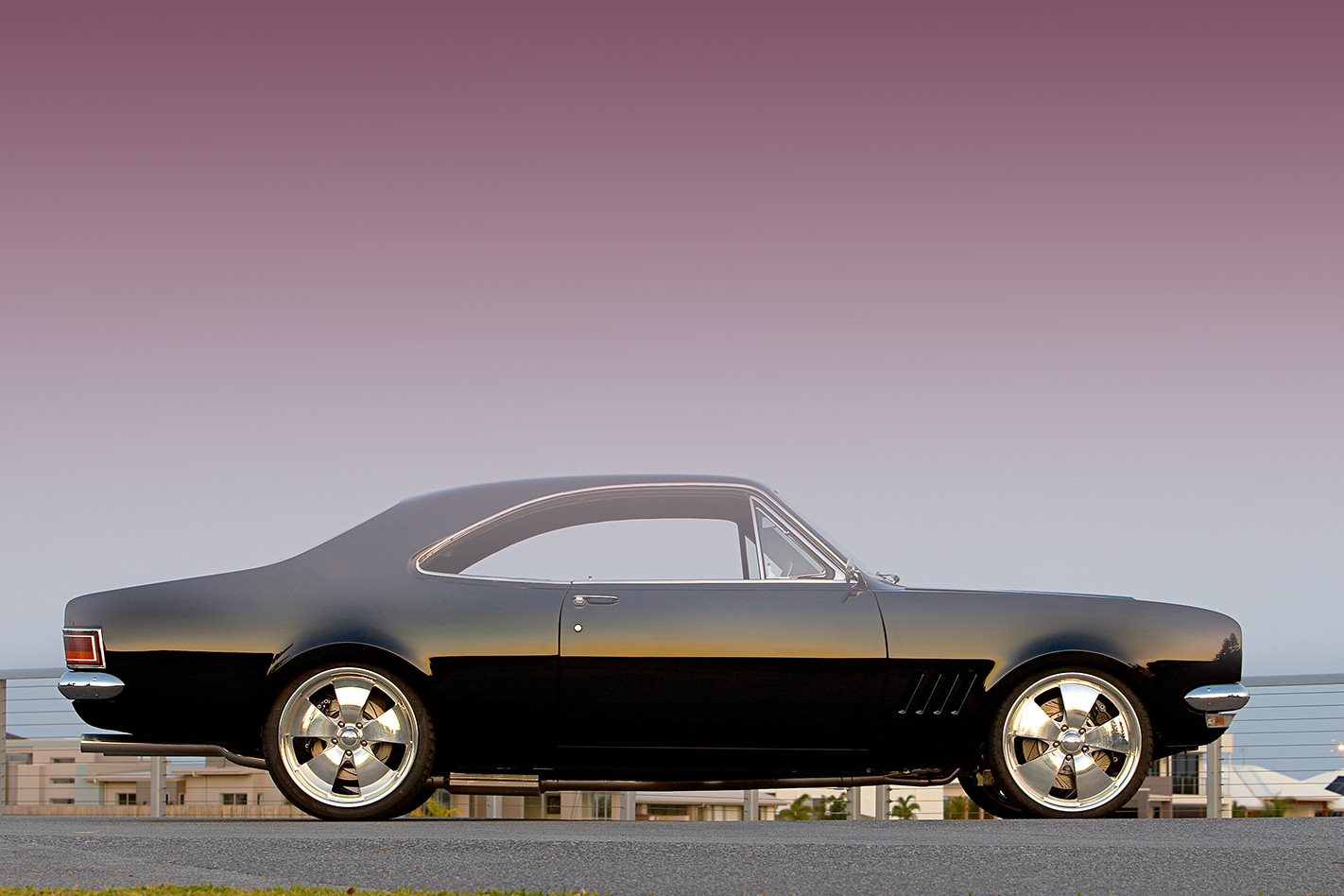 As you can’t just order replacement panels for Monaros — not yet, anyway — the master metal men at Classic Ridz removed all the rusty panels and repaired them.

“There wasn’t a piece left on it after we removed all the rusty panels. Both rear quarters, roof, parcel tray, plenum chamber, floorpans, sills, boot floor and subframe rails were unpicked, repaired and then put back on the car,” Tony says.

The advantage of doing it this way is that you can also get to the internal panels, because, if it’s rusty on the outside, it’s not going to be much better in the places you can’t see. 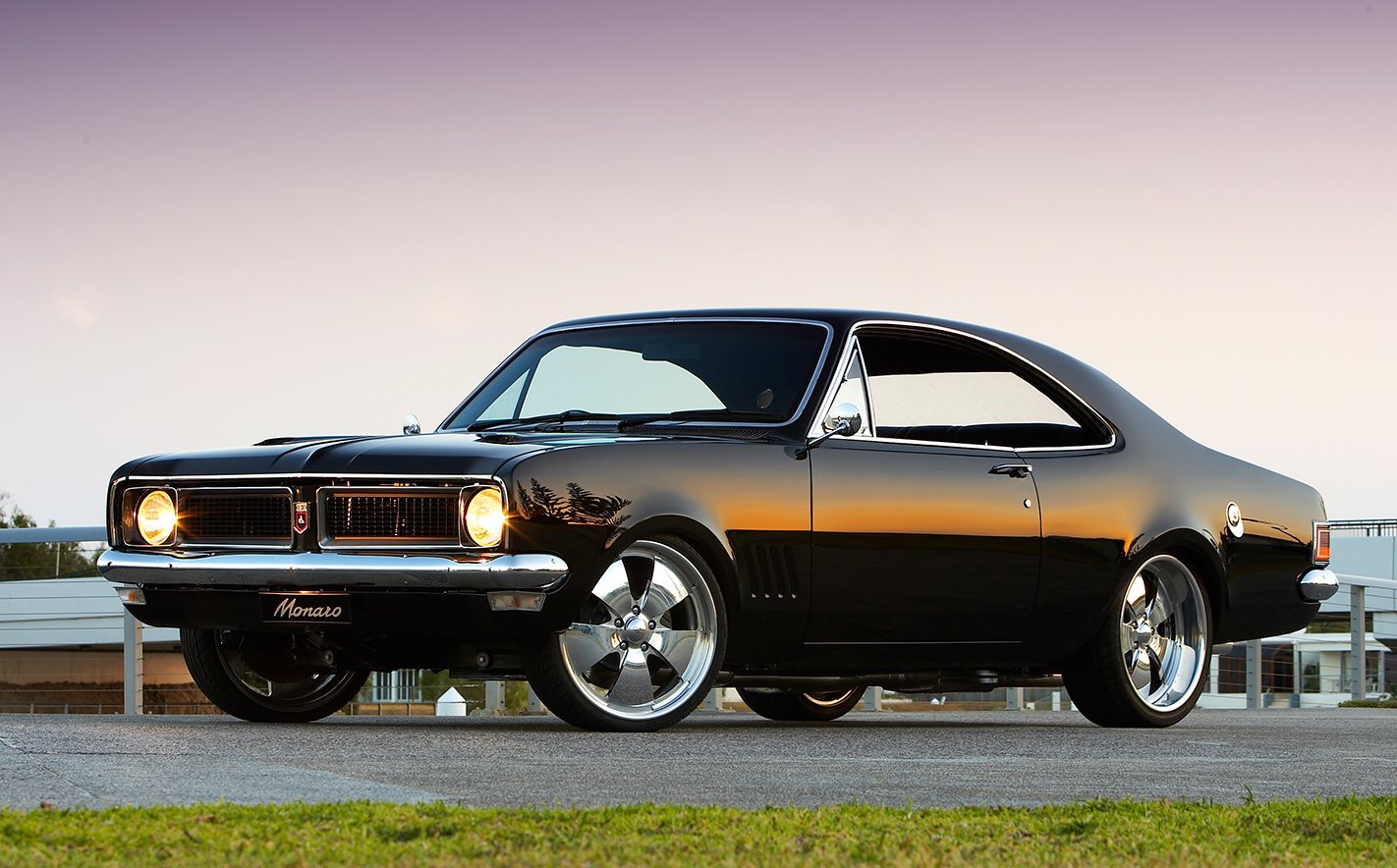 Other mods included a new transmission tunnel to fit the T56 manual ’box and some massaging of the wheel arches to fit the big Intro Victories, which measure 20x10 out back and 20x7 up front. The fronts were eight inches wide but were narrowed and the offset changed to clear huge AP Racing stoppers — 360mm rotors clamped by six-spot calipers. The rears are 330mm with four-spots over them.

Having such big brakes means you need a motor that goes really hard — a bit more than a hotted-up 186S. How does 524 horsepower sound? You might be able to do it with a set of triple Webers and a Saturn V rocket on the old red motor but Scott chose a much more reliable method. 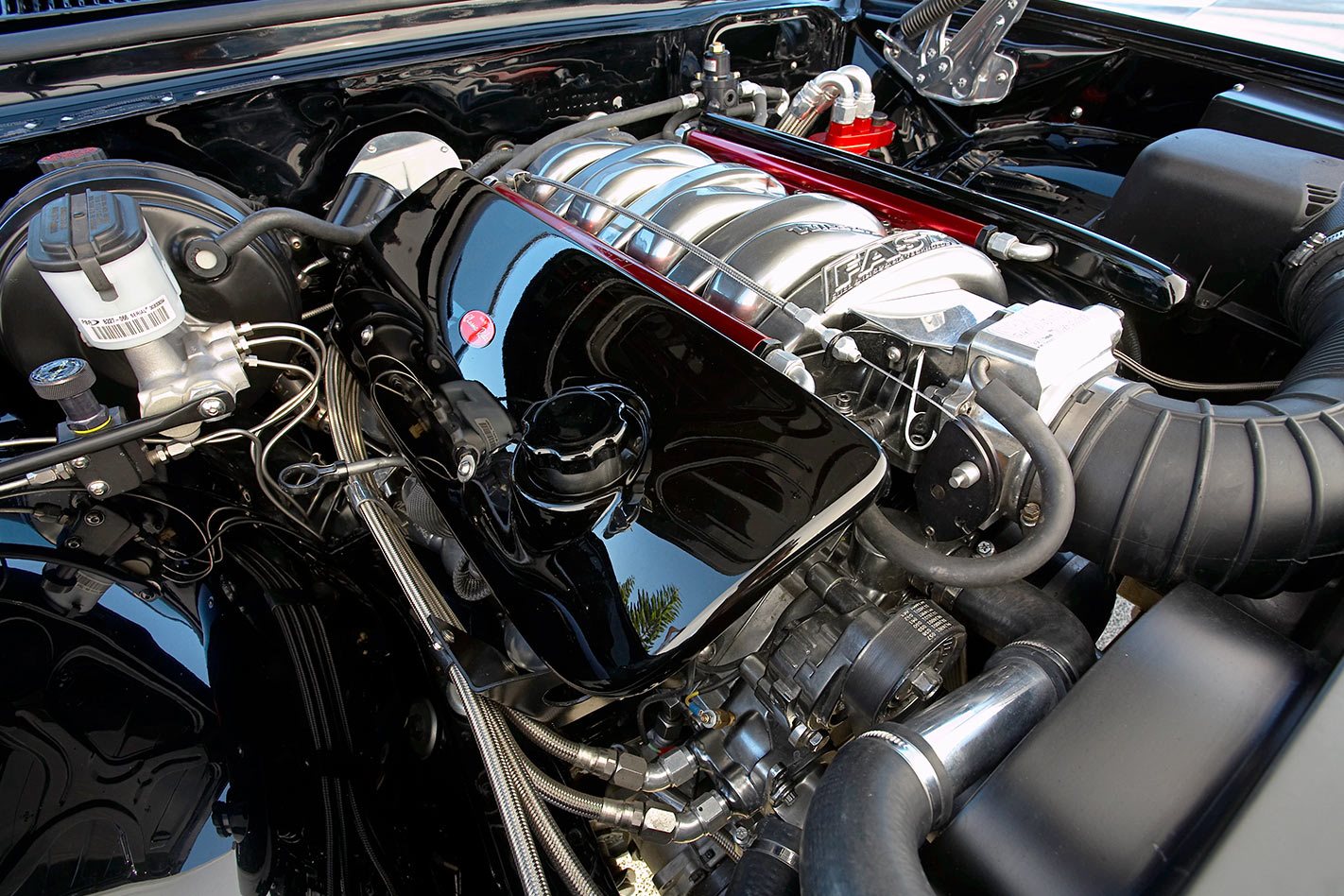 Six-litre LS2 copped a few tweaks, the most obvious being the F.A.S.T intake. It’s good for 524hp at the flywheel

A six-litre LS2 now resides in the engine bay and it punches out those numbers thanks to a F.A.S.T inlet, Comp Cams roller cam and 10.8:1 slugs. Making sure it all hangs together is an Eagle crank with matching H-beam rods. 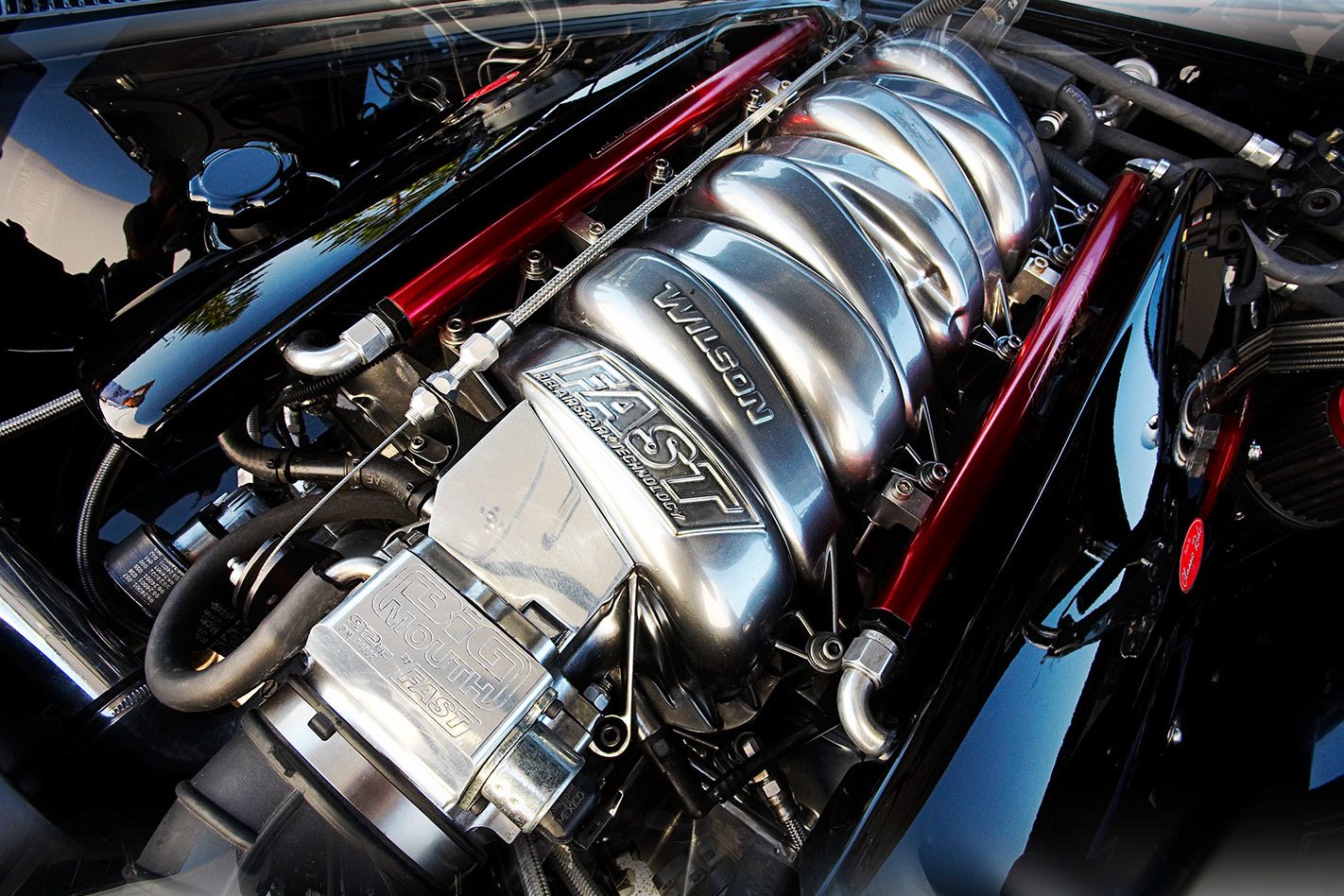 It sends — as Jeremy Clarkson would say — the torques (all 525 of them) back to the aforementioned T56 six-speed via a Centerforce clutch. The next link is a Mark Williams tailshaft which spins its way to a 9-Plus nine-inch housing filled with a Strange 3.7:1 Truetrac centre and 31-spline billet axles. There’s also a billet pinion support for good measure.

Suspension-wise, it’s all fairly standard fare. Leaf springs out back and lowered King springs up front, with Koni shocks all ’round. It’s a hell of a lot cleaner under there now, but since Scott plans on driving the car, it’s not over the top. Just shiny black paint over a fine-finish sound deadener. 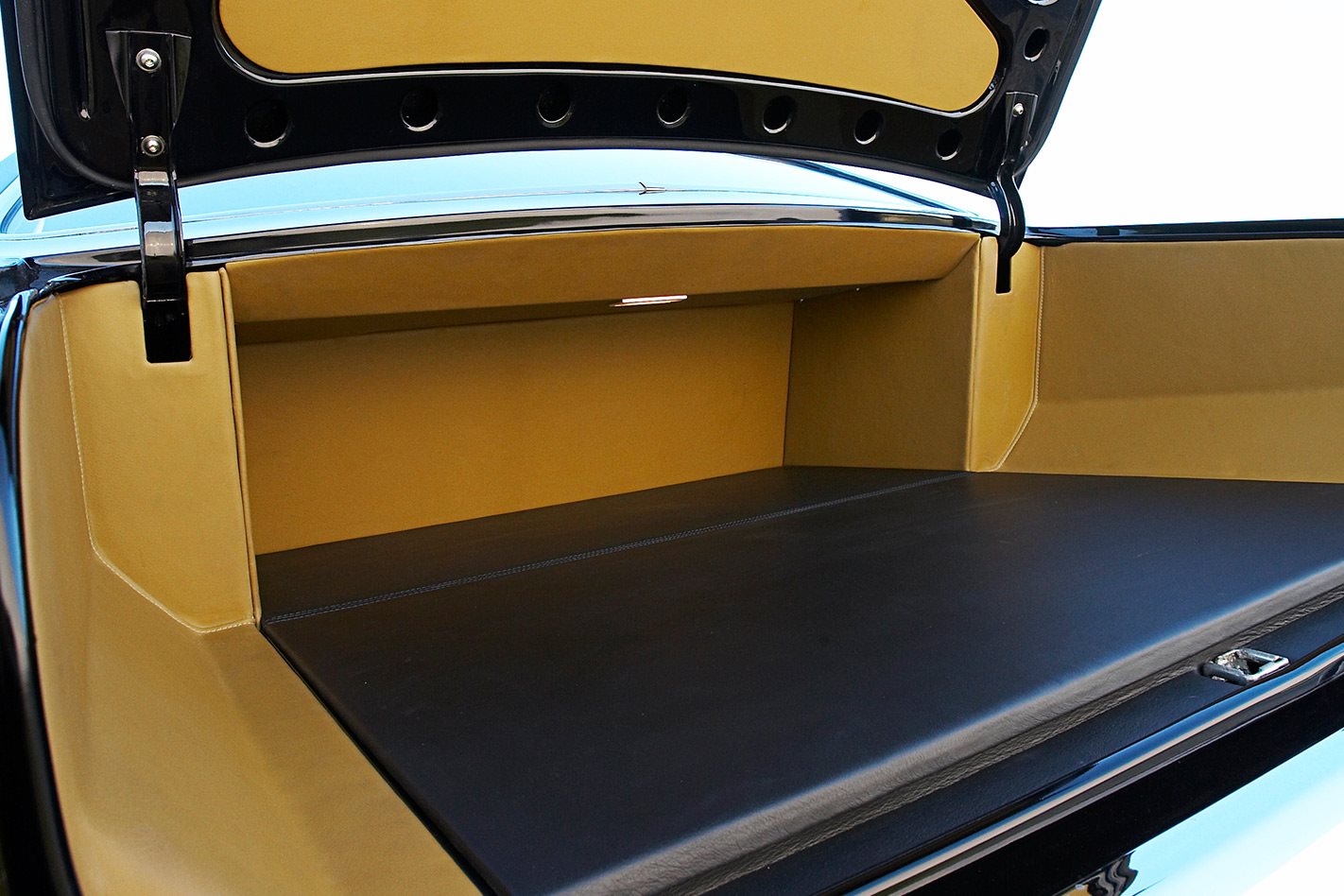 Custom boot trim was made of steel, covered in leather. The boot floor lifts up on gas struts to access the spare tyre

The steering was converted to Commodore rack and pinion, which wasn’t straightforward, the main issue being the sump: “We started to modify a standard sump but in the end got a Canton alloy unit and had to carve that up anyway,” Tony says.

Everyone knows how hard it is to get a car ready for black paint, so can you imagine how hard it was to start with something that looked like it lived on Bondi Beach? 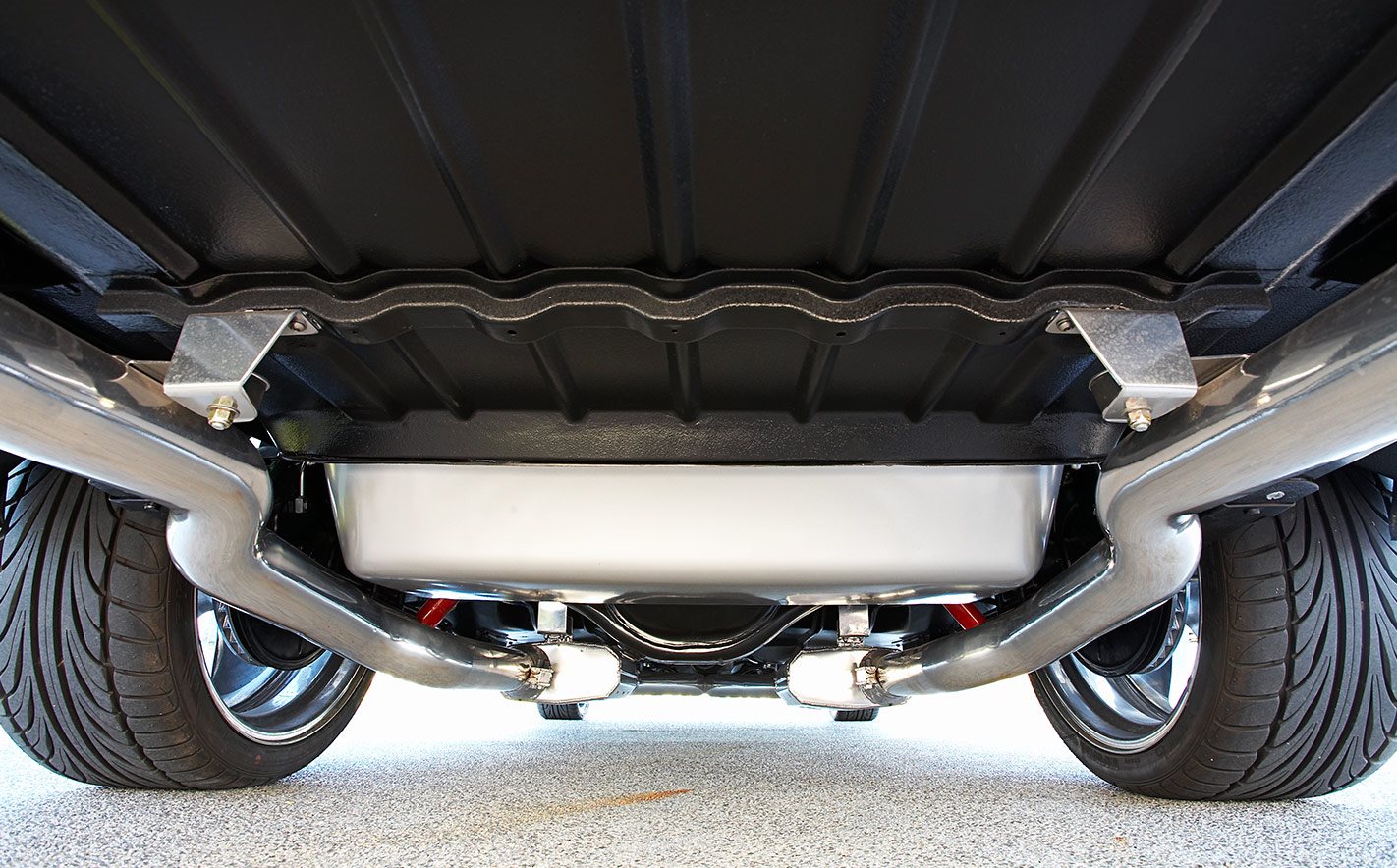 The exhaust was changed to go over the diff. The underside was covered with a fine-finish sound deadener then painted gloss black for easy maintenance

The panels and paint on this car are flawless — check the reflections and the panel gaps. The body was left largely as The General intended, but the bumpers were cut and reshaped so they sit more tightly against the body. It’s a real credit to the team at Classic Ridz.

Shane Bow is the man who laid on the Glasurit Deep Black, with assistance from Warner Smith and prep work by Steve Adams and Peter Wells. 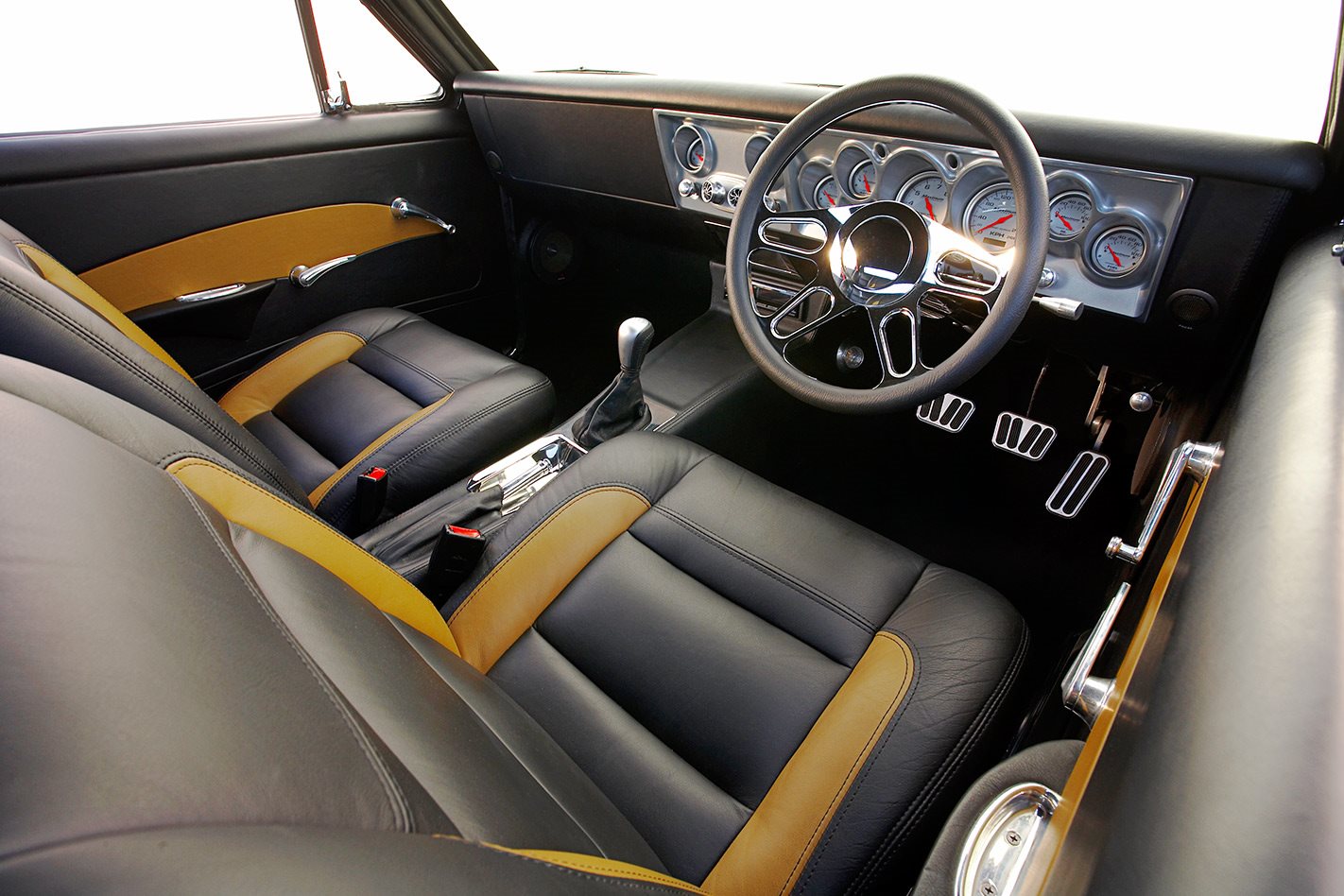 Integrated a/c sends cold air to the back seat through the custom console. Concealed retractable seatbelts all ’round

The interior is immaculate, just like the outside, although a lot more modified. Often, a modern interior in a classic doesn’t work but that’s not the case here. Scott’s managed to keep a lot of the Monaro style, yet he’s updated it. For example, the seats are the originals but trimmed in a modern pattern and colour combination.

The centre console was custom-made to house the Rip Shifter, handbrake and stereo head unit. It’s a stunning job, handled in house and trimmed by Chris Bakker. 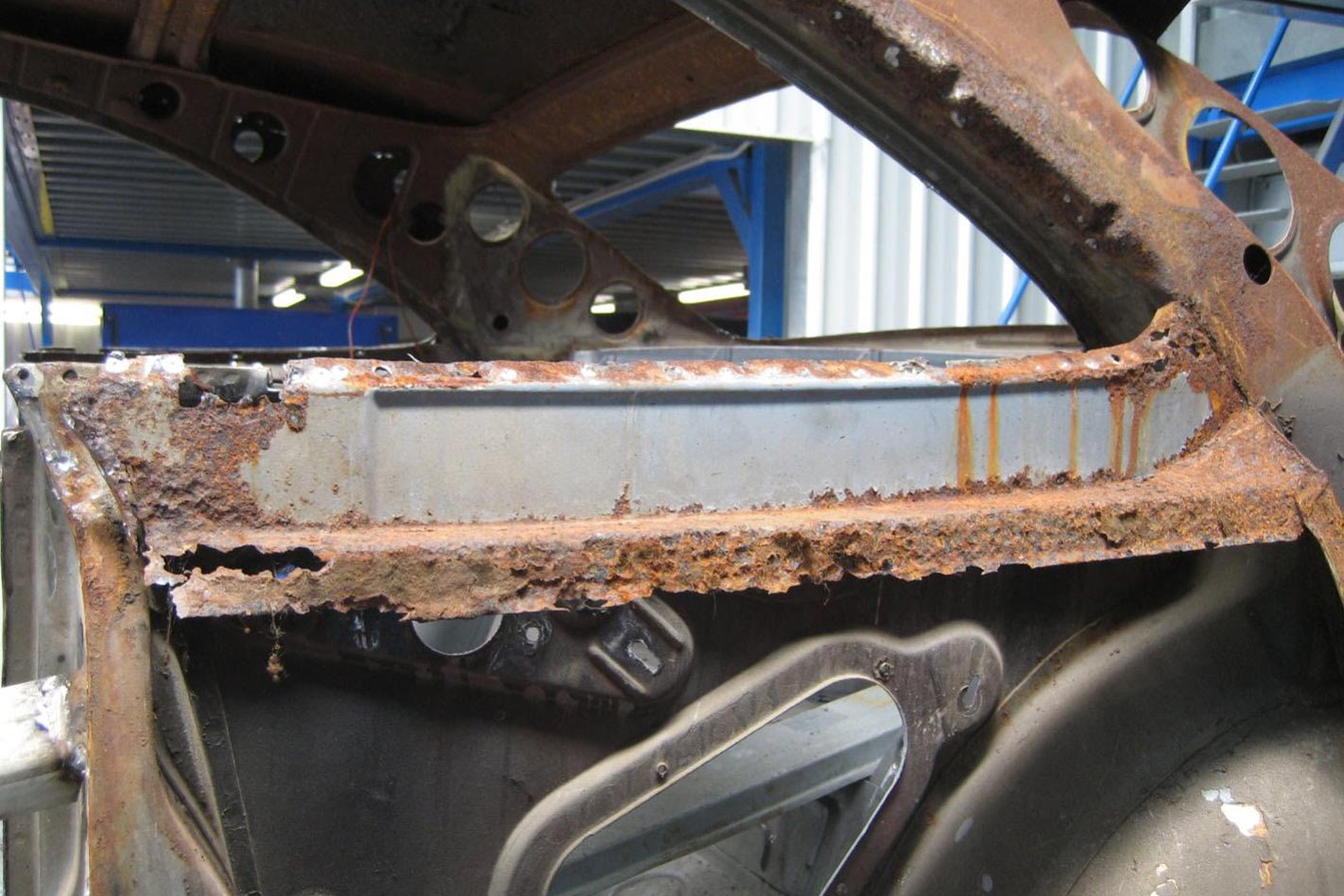 The dashboard is a masterpiece of design and manufacturing. It looks like a modified original but it’s a chunk of billet ally that’s had all the bits that don’t look like a really cool dashboard machined away. It’s filled with eight Stewart Warner gauges and a couple of air-con vents.

So in a nutshell, you’ve got a car that was once a genuine basket case and after 3000 man hours, it’s been turned into a ride that manages to be not only fast, fun and enjoyable to drive, but would look right at home in the Meguiars Elite Hall at Summernats, too. 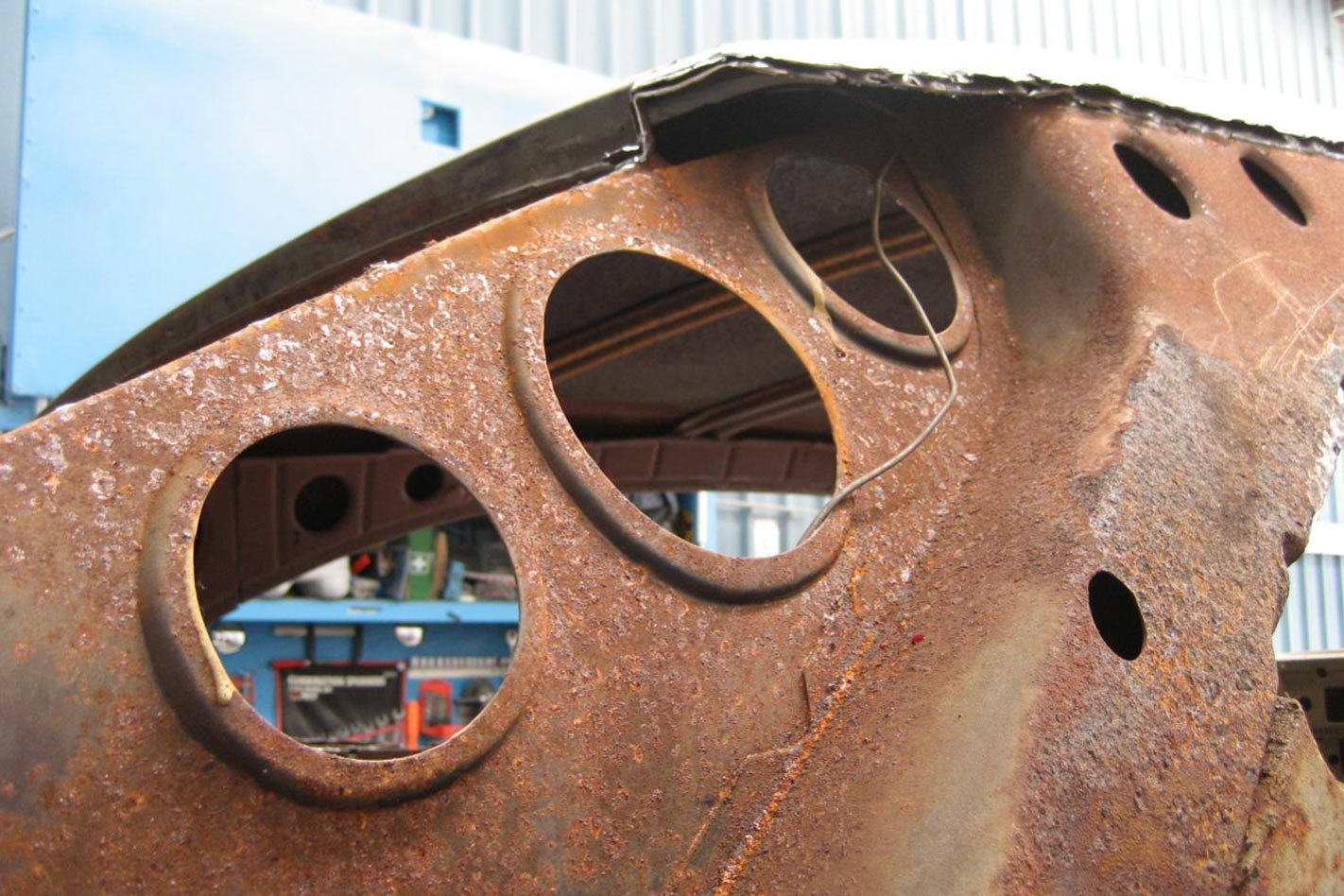 But that’s probably the last place you’ll see it. Scott likes to keep a pretty low profile and while the HG attracted a ton of attention when it was displayed unfinished at the 2009 Brisbane Hot Rod Show, he isn’t interested in chasing the show circuit. Having his dream car in the shed is more than enough for him.

HG MONARO - IN THE BUILD 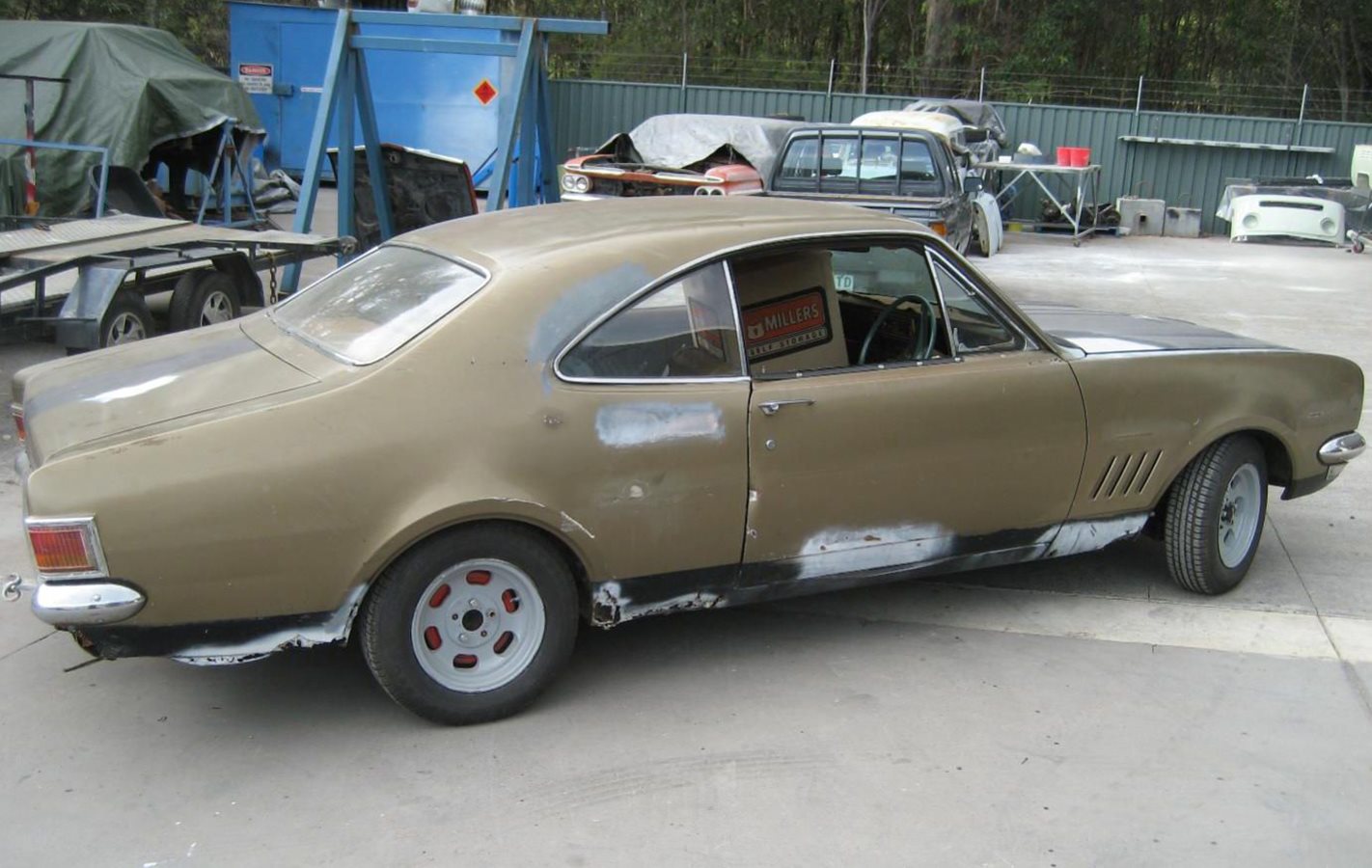 This is how the car looked when Scott drove it in to Classic Ridz. The photo doesn’t make it look as rough as it was. 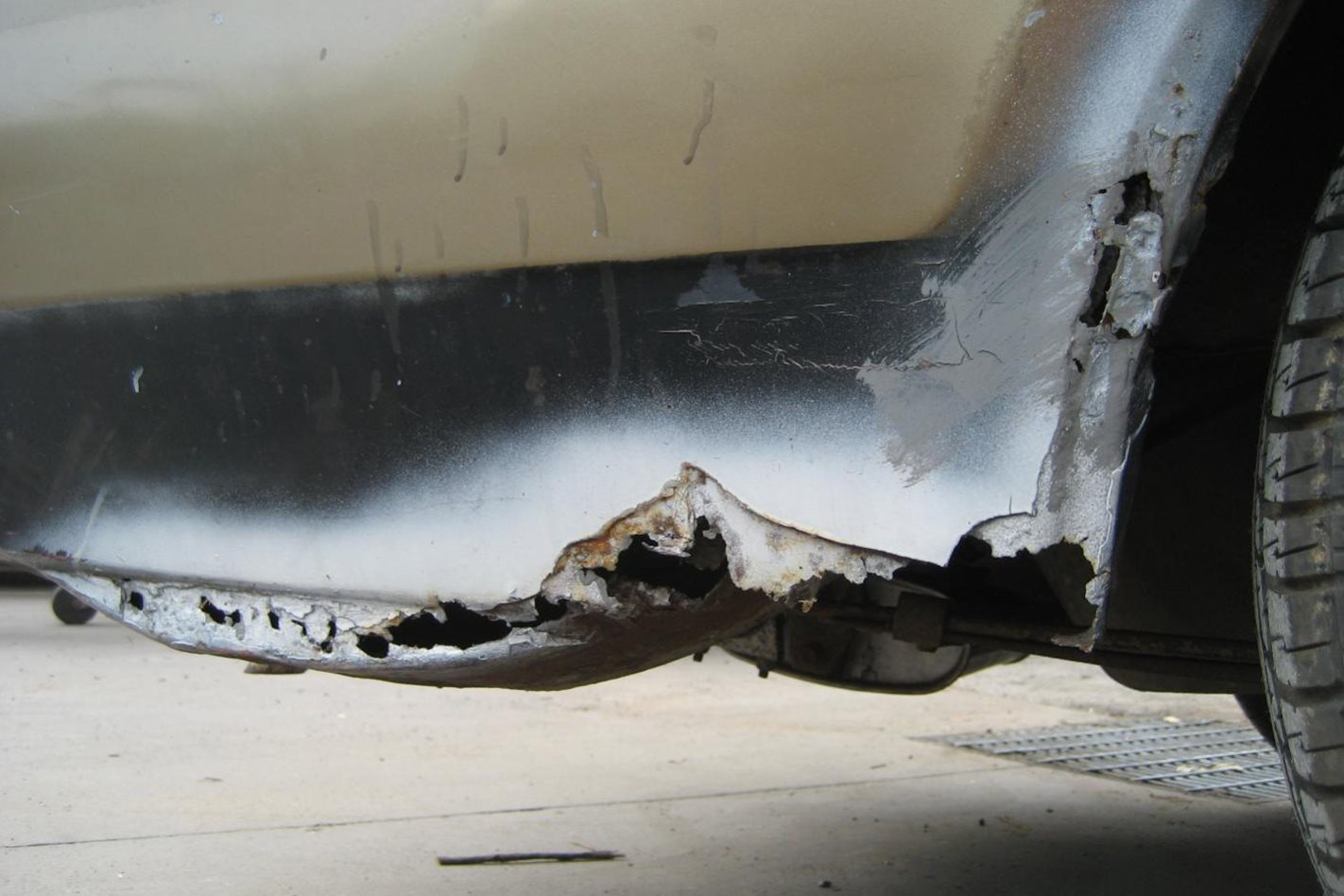 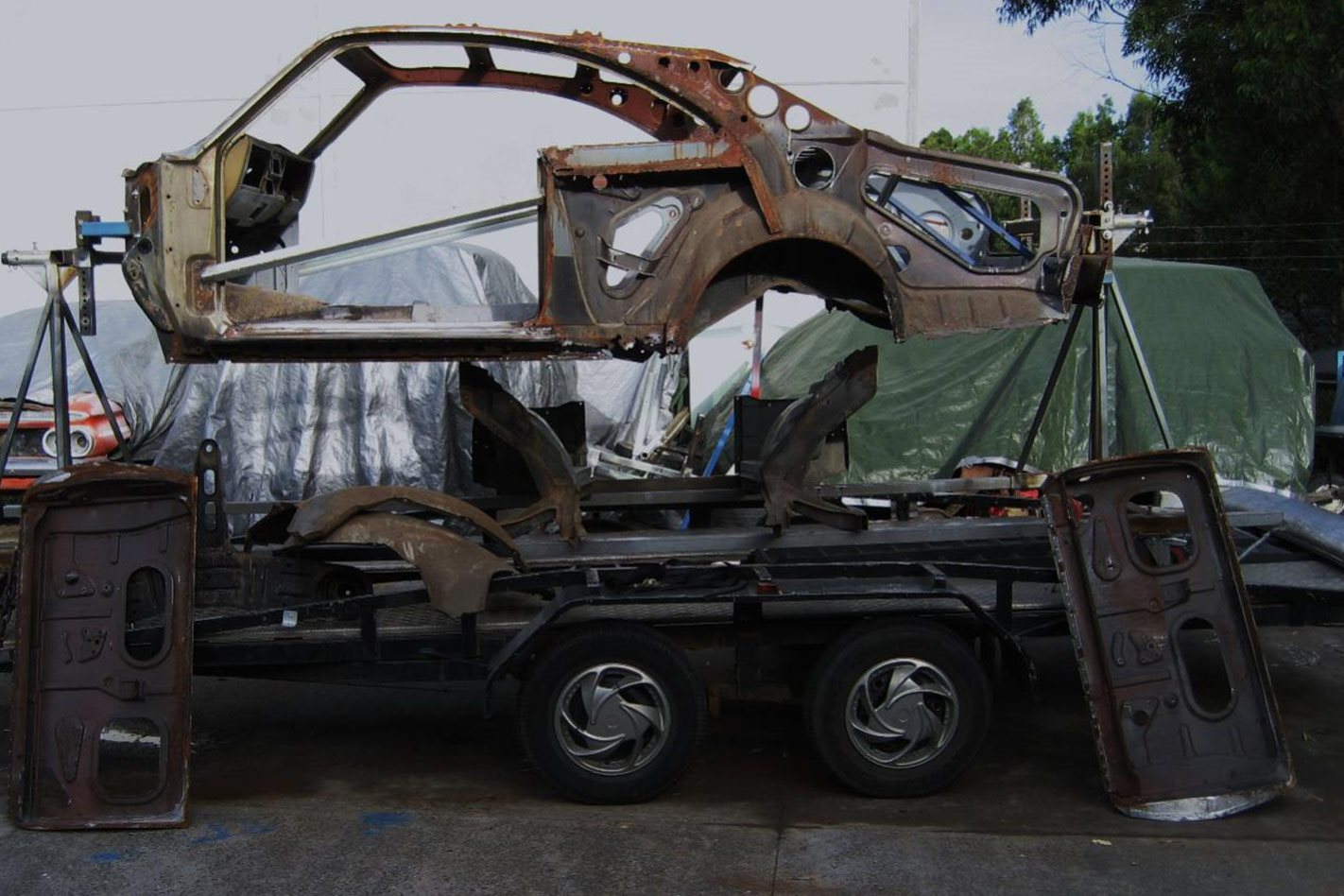 You’ve heard of taking cars back to bare metal. How about back to a bare skeleton? 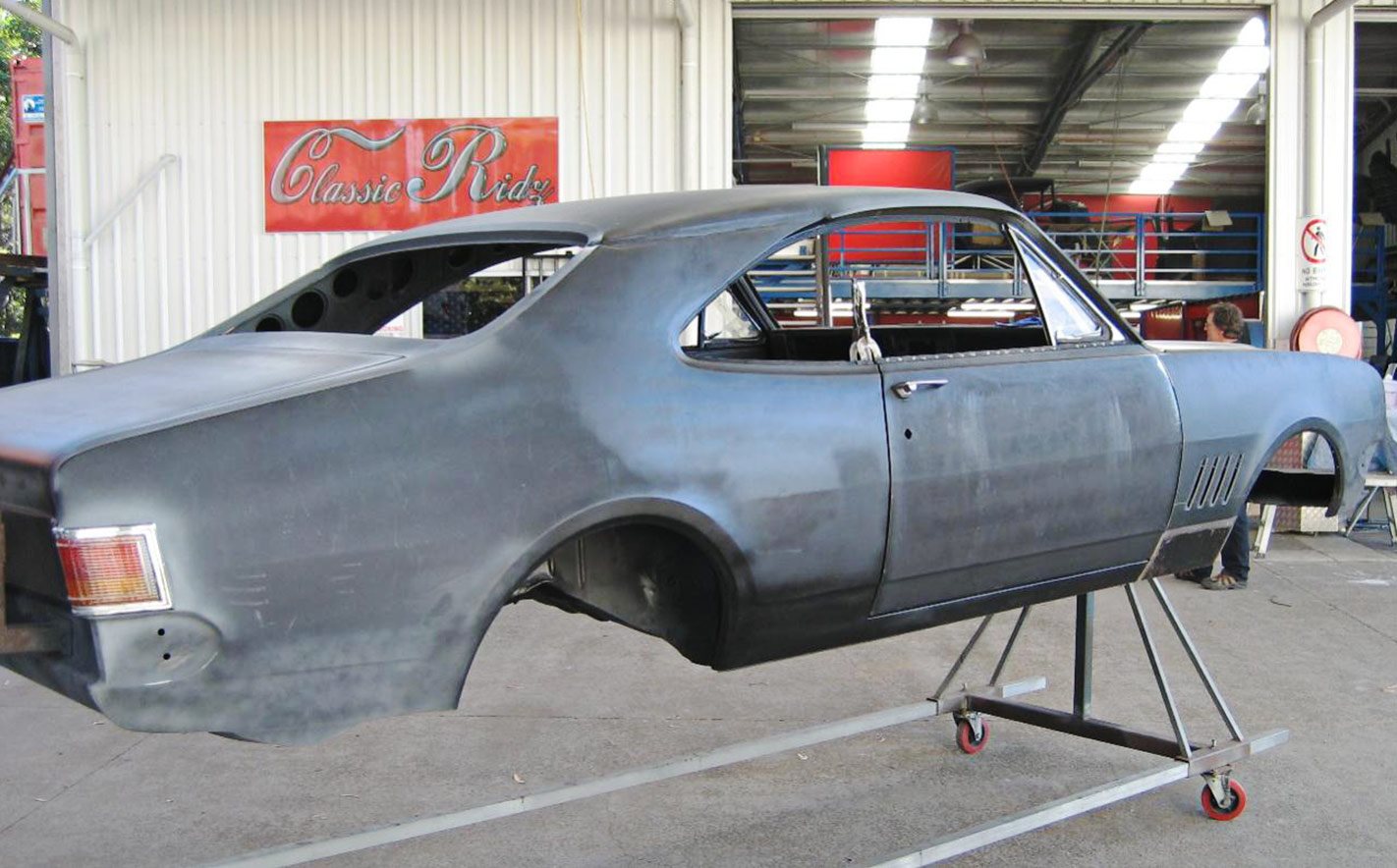 The body finally taking shape after many hours of repairs and panel shaping. 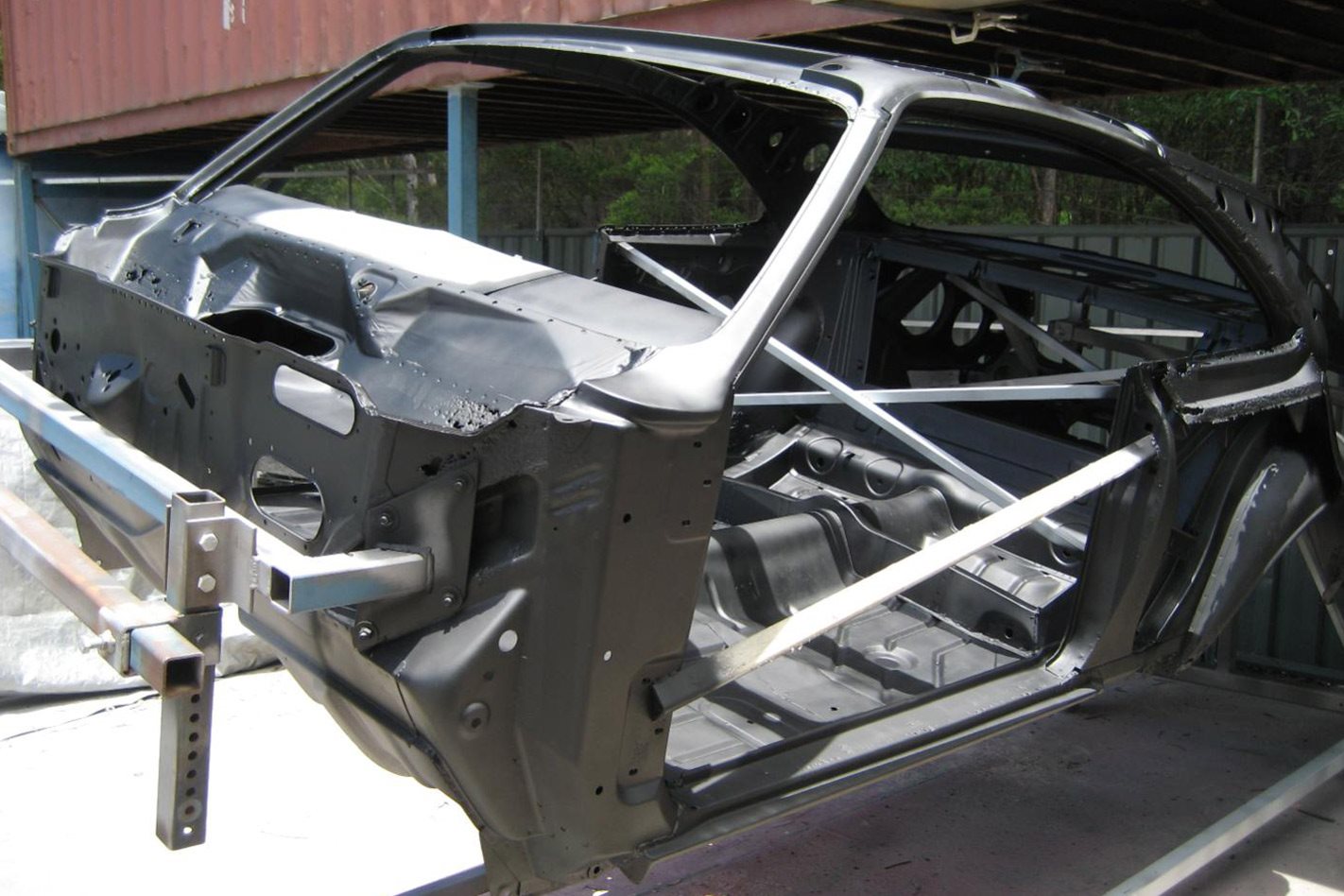