RICHARD Petty is The King in NASCAR. He raced Plymouths for 10 years before a disagreement with the factory arose in late 1968. Dodge had come out with a Charger 500 featuring subtle but important body mods learned from wind-tunnel testing, including a forward-mounted grille, smoothed covers placed over the A-pillars and a new flush rear window. They were an improvement and Petty wanted one. But he was given a flat ‘No’ when he asked the factory to share the love.

So for 1969 he switched to Ford and won the very first race of the season! Panic set in at Chrysler/ Plymouth and they realised it would take a more aerodynamic car to get him back.

Things were changing at a pace as rapid as the racing in early 1969. Dodge upped the ante by adding an extended nosecone and a 23in-tall wing high above the roofline for clean air. The Dodge Daytona test mule reached speeds in excess of 243mph on the Chrysler Proving Ground’s five-mile oval so they knew they had a winner on their hands. 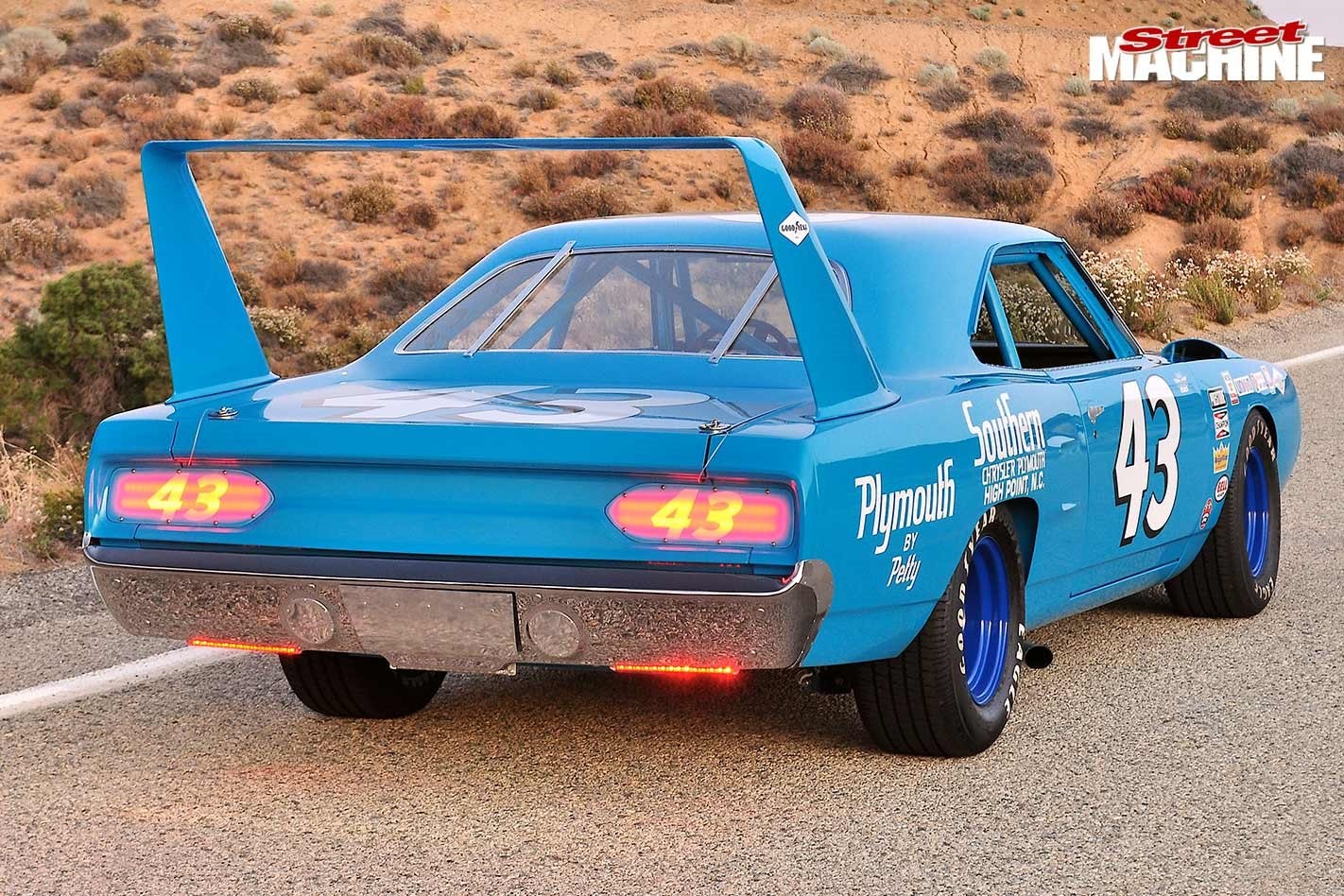 By mid-1969 Petty’s Ford had delivered his 100th career win and Plymouth brass visited him in Level Cross, North Carolina, to ask what it would take to lure him back. His answer was that he needed a car like the Dodge Daytona, so the rush was on for Plymouth to get busy converting its Road Runner into a machine capable of matching the Dodge. This new slippery version was given the name SuperBird. The SuperBird was the star car of the 1970 Plymouth/Petty racing program, and the factory contracted the Petty shop to campaign two different race cars, one for Richard himself and the other for a fresh face on the scene, Pete Hamilton.

The two-car assault was a winner — Hamilton won three superspeedways while Richard won 18 races and would have won more if not for a crash that put him in hospital and caused him to miss out on six crucial races and probably the championship.

The 1970 season was a big one for NASCAR as the ABC broadcast the major Grand National events, and that pushed the Petty Plymouths into the mainstream media throughout the year.

All this winged Mopar excitement came to a sudden halt with the announcement of new rules for 1971. Major restrictions were put on them, including much smaller 305ci engines. But though the wing cars were pronounced dead for ’71, Petty remained strong; he went to Daytona with a 1971 Road Runner and won.

A set of ultra-rare double-centred 15x91/2 stamped steel race wheels were found. They started as heavy duty units for agricultural and truck use, then were augmented for further strength (standard practice for Grand National cars of the era) with thicker centres to handle the extreme use race track since

Historians and fans alike look back on the 1969 and ’70 NASCAR seasons as iconic years. Certainly there have never been cars like those Daytonas and Superbirds on the race track since.

Jump to 2005 and Mopar enthusiast Al Jensen, from Mesa, Arizona, owned an original Hemi SuperBird but always thought it would be cool to do up a tribute car just like the one Petty raced. He searched for everything he could put his hands on in the way of photographs, books, old magazine articles and movies, then started the project using a Belvedere body shell with a fabricated steel replacement nose, steel rear window plug, reproduction composite wing and a pair of salvaged 1970 Coronet fenders and bonnet.

He visited the Petty Museum to see firsthand — as well as take hundreds of photos of — the #43 Plymouth wing car that’s on display there. However, even this machine is itself a tribute car. Petty Enterprises put it together in the mid-1970s as a museum piece for Richard’s trophy room.

Because there is no carpeting in the interior, all wiring for the tail-lights was hidden in the rocker panel area. Without seats you can see the the electrical system shut-off switch in the floor. Air compressor and tank for suspension is hidden up under the passenger side dashboard

A big step forward in building the car came when Jensen met Mitch Connett at a Las Vegas Mopar car show. Connett is a former stock car racer and has a business located in Quartz Hill, California, that specialises in fabrication and assembly.

Pretty much as soon as they spoke, it became clear that if Mitch took on the build, it would be an ideal situation for both parties. It became a seven-year association but as you can see, it’s been worth every minute of the wait.

Power comes from a 472ci Hemi crate engine, complete with a rare NASCAR ‘bathtub’ intake. A few modern features were added, including fourwheel disc brakes, power rack and pinion steering, and air suspension for the low ground clearance on the nose, but the end result after seven years of construction is a fast and well-built road-worthy creation that has been brought to life right from the NASCAR history books!