No, Dino Donatelli's VG Hardtop wasn't built in Victoria. This is Mexican engineering at its best

No, Dino Donatelli's VG Hardtop wasn't built in Victoria. This is Mexican engineering at its best

THERE are two main schools of thought when it comes to starting a project car. You can scout around for the cheapest specimen and then spend every waking hour cutting, cursing, welding, grinding, swearing and crying as you slowly resurrect it. Or you can go the Dino Donatelli route and buy something straight and rust-free. Sure, it costs a few extra bucks up front but it’s easier on the blood pressure and you’ll stay sane.

“The VG was my first Val. It was poo brown with a cream vinyl roof; it looked just like my dad’s old Safari wagon. I was looking around for a two-door and then I saw the ad for a ‘Mexicana’ and I’d never heard of one before,” Dino says.

The Mexicana cruised along nicely with a stock-as-a-rock 318-cube small-block under the bonnet and had just undergone a full restoration. While it was almost too good to screw around with, the price was right so Dino snapped it up and within a week it was at West Coast Smash Repairs getting a full respray in Violet Pearl Metallic. 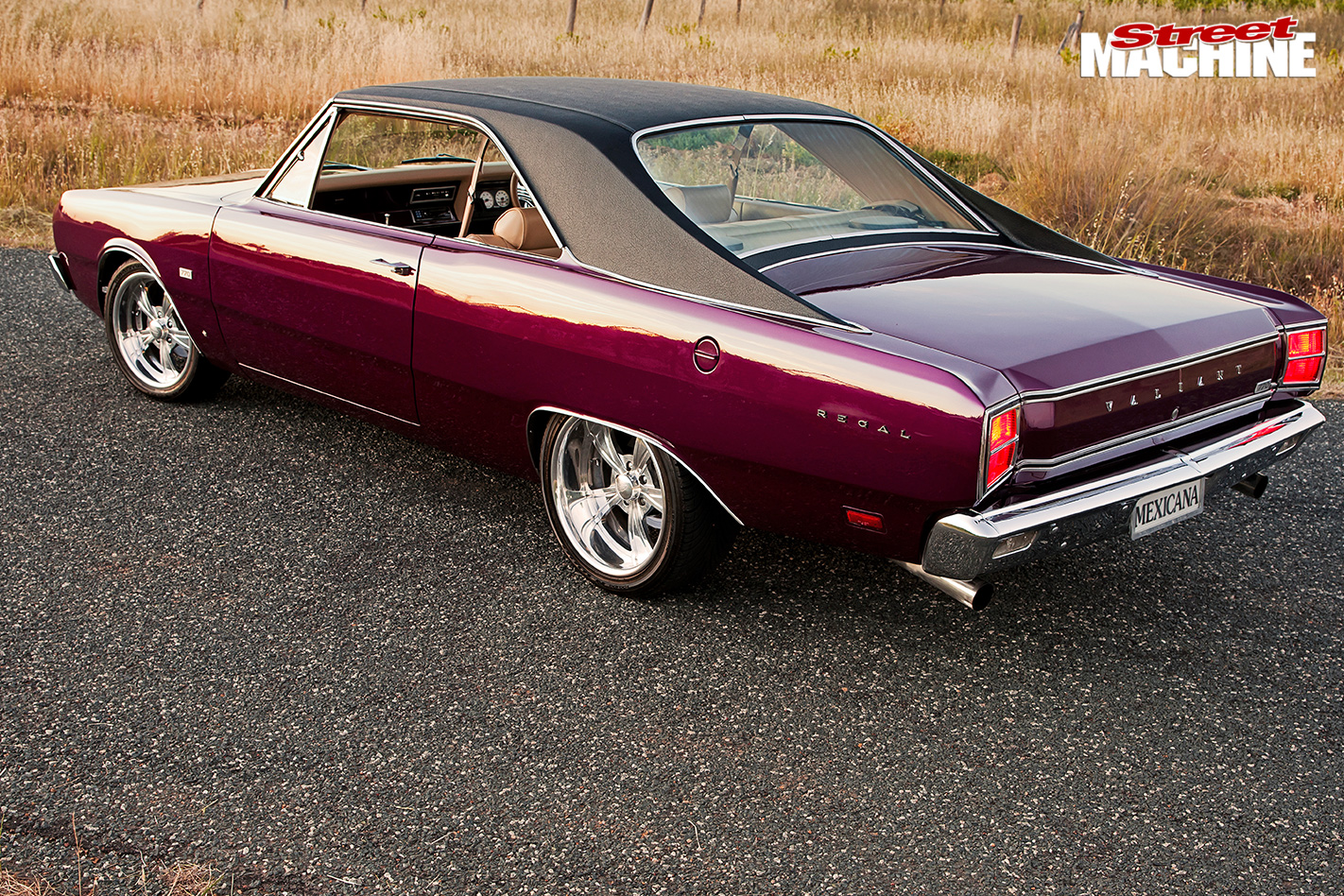 “Around the time I bought the car, I saw the colour on an XA coupe in Street Machine,” he says. The car in question was Kris Hodge’s coupe, a car that’s well-known to SM readers and Dino thought it was the perfect coating for his new Valiant. “I had to get rid of that poo brown!” he laughs.

Stripping back a freshly painted car will often deliver a few surprises but Dino is happy to report there were no problems with this one: “The guys rubbed it back and it was mint.”

Initially, they left the factory vinyl roof in place and tried spraying it with vinyl paint but the result was less than spectacular so the roof was redone with fresh black material. It’s a colour combination that’s hard to fault. 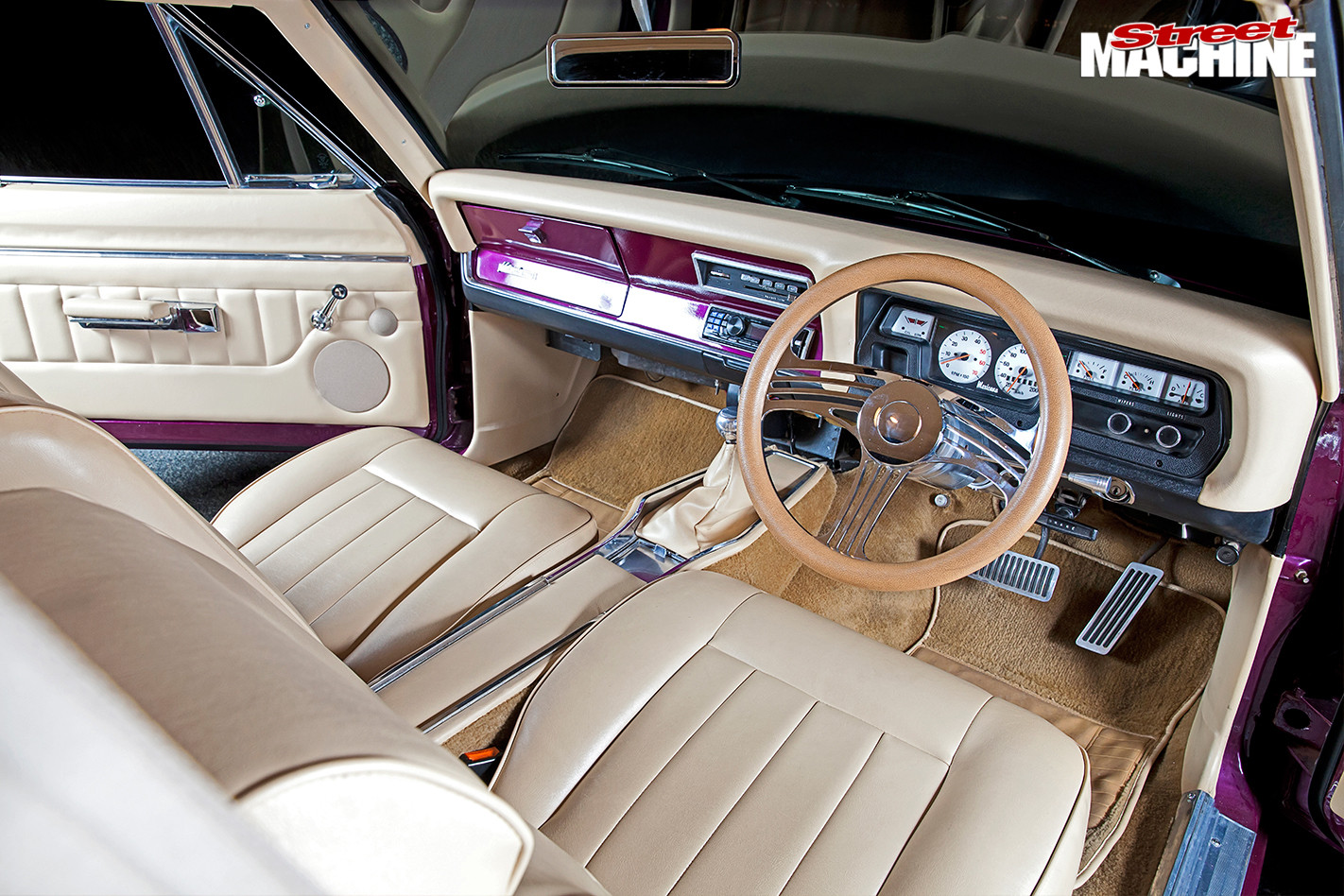 But if that’s not enough to send Valiant purists around the country into cardiac arrest, Dino also had the factory buffalo grain interior redone in velour. “I didn’t like the velour once it was done,” he admits, “but I left it for a couple years and then redid it in marine grade vinyl.”

The stock small-block wasn’t really doing it for Dino either, but he started with the diff and looked into getting some steeper gears fitted to the factory unit to give it more punch off the line.

However, once they bounced a few figures around they decided to go with a new 31-spline nine-inch instead. And that’s when things got serious, Dino explains.

He had a local guy build him a 408ci stroker small-block to give the big hardtop some get up and go to match its flashy looks. The new engine had enough herbs to push the hardtop to a high 11-second pass at Perth Motorplex. 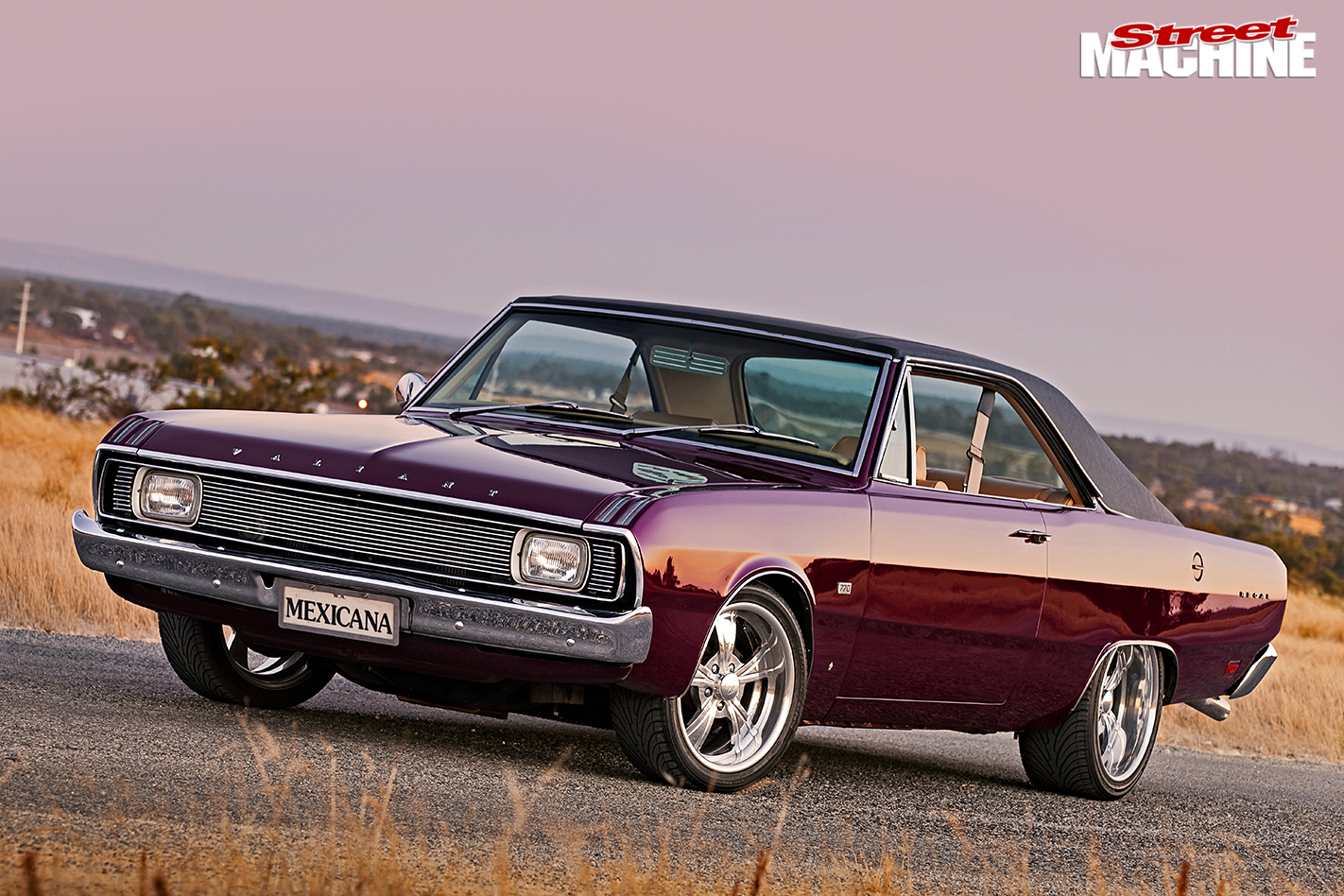 “It was alright,” he says, “but then the guy who built it decided to give it a shot with the nitrous and it never ran the same again.”

Dino’s good mate Simon at Allfast Torque Converters agreed the car had nowhere near the punch it used to have and he directed Dino to SCM Race Engines.

“The guys priced up a new motor and they found everything was so expensive for the Chrysler stuff, so I did some looking around on the ’net and found Muscle Motors.”

Now, if you’re looking for some Mopar action then Muscle Motors in Michigan, USA, is the go-to shop. Dino spent some time on the phone with the guys before laying his hard-earned cash on a complete 440ci combo.

Mopar fans will be familiar with the number 440 but those cubes usually come wrapped in a massive big-block. Not Dino’s donk — Muscle Motors has come up with a 440-cube small-block combo, which saves weight and slots into the same spot as a little 318 V8. 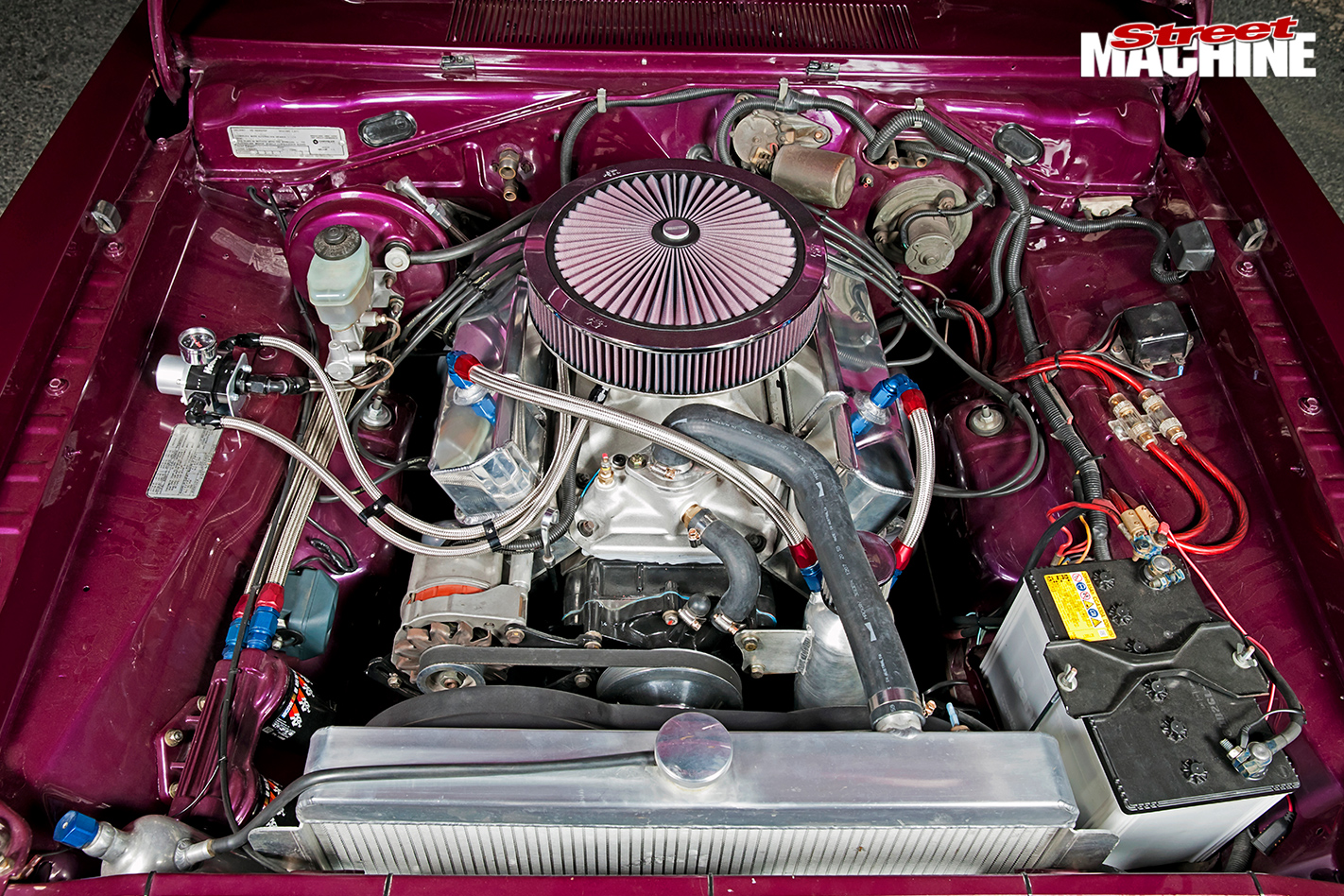 Dynoed at 735hp, the 440ci small-block has plenty of grunt but they sacrificed some power by swapping to an induction combo that keeps everything under the bonnet

The guys started with a Mopar Performance R3 block and filled it with a Callies crank, Ross pistons and H-beam rods. The heads are Indy, a pair of 245cc 360-1 units sealing off the top end, but the Indy intake proved too tall for the standard bonnet so they went for an Edelbrock RPM Airgap manifold topped by a Quickfuel 950cfm carb instead.

On premium unleaded the engine made 735hp with the Indy intake and the boys at SCM — who fitted everything up — asked if Dino wanted to cut the bonnet. The answer was: “No way!” but he’s relented a little since then.

“I’ll probably do a spare bonnet eventually so I can put the Indy manifold and 1050 back on it, then we’ll give it a go down the dragstrip to see what it does.”

Even so, while the short intake has probably cost him a few ponies, he assures us the Val still has plenty of grunt. Even if it hasn’t, there’s another car waiting in the wings. 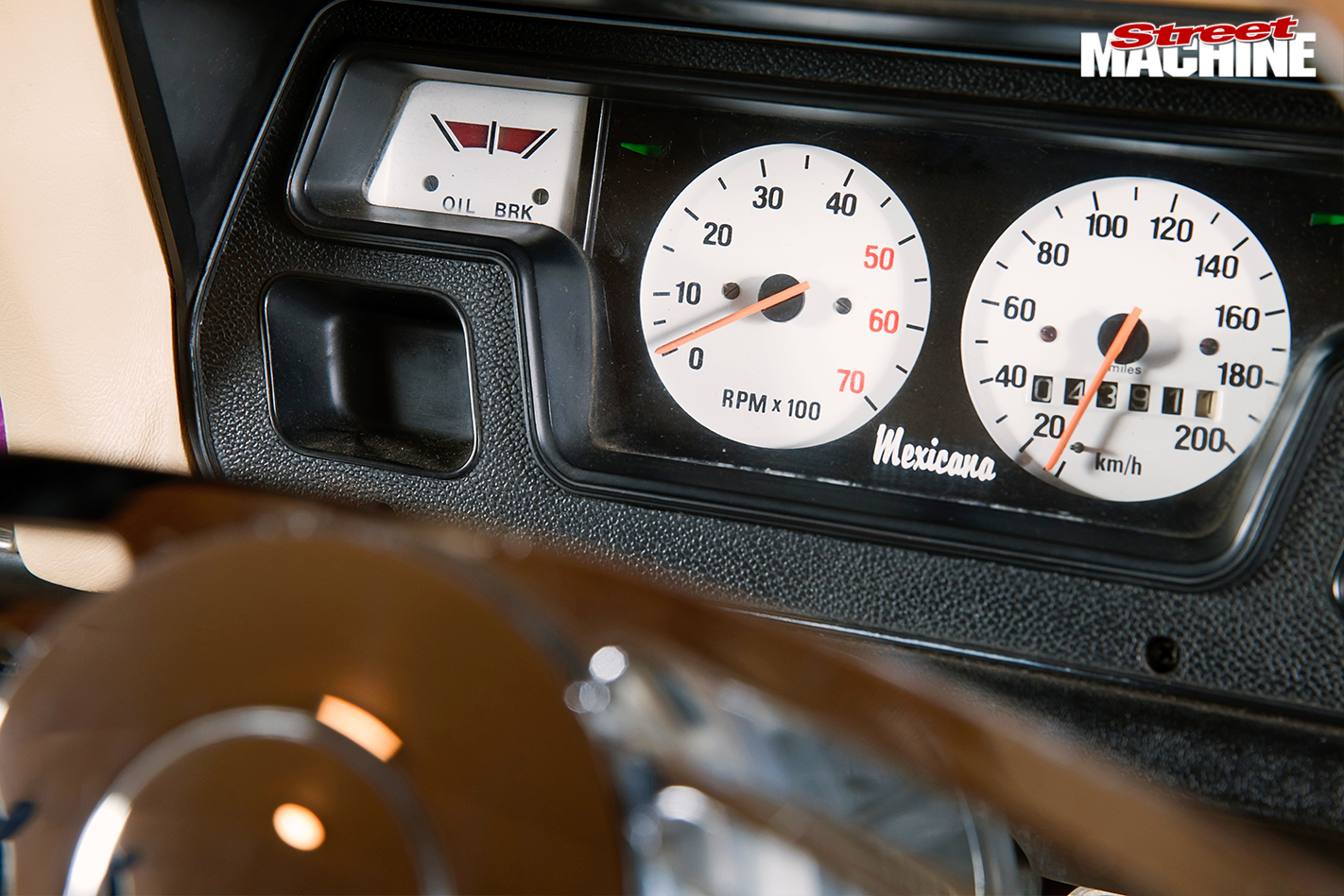 About five years ago Dino started on a VH Charger and it’s almost finished. But forget 440 cubes — this has an all-aluminium 572ci Ray Barton Hemi up front. “It’s just a dream,” Dino says. “Anything with that word ‘Hemi’ is just awesome.”

In the meantime he’s happy to cruise with his boys Daniel, 6, and Anthony, 4, though he reckons the VG Hardtop might be copping a brake upgrade soon.

“I’ve noticed that with this new motor it doesn’t stop as well,” he laughs.