Stock as a rock Ford Falcon XY. Except for the bits you can't see

Jeff Axiak's Ford XY Falcon looks stock as a rock. Except for the bits you can't see

IN THIS game we see hundreds of cars. Some are about as subtle as wearing your birthday suit to a kids’ Christmas party and would get you arrested just as quickly. Sky-high blowers, turbos punching through the bonnet or grille and colour schemes that glow in the dark — we’ve seen it all. 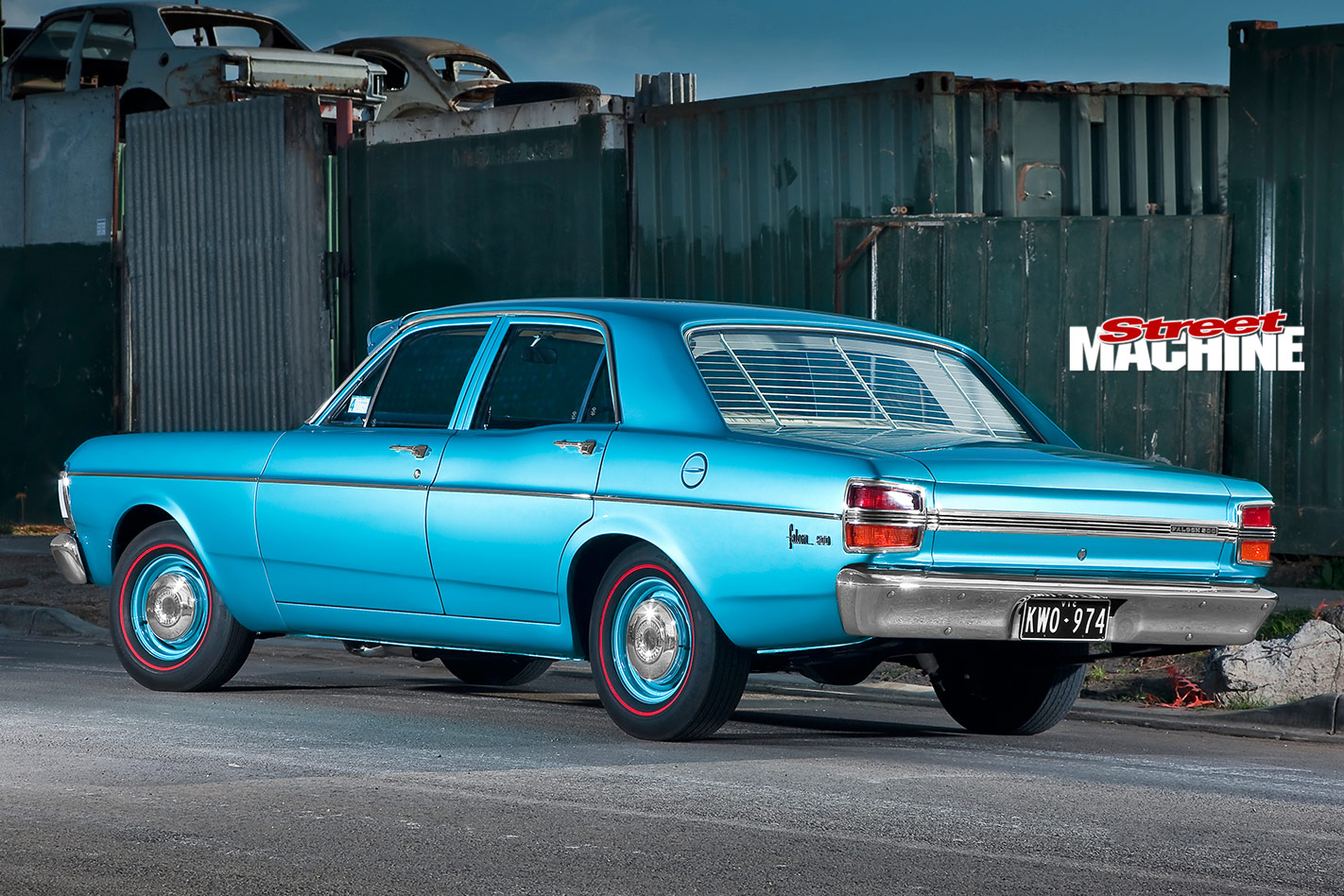 But then there are the sleepers. Stock as a rock on the outside yet brimming with horsepower underneath. Normally there are giveaways such as slightly wider tyres, chunky exhausts or a not-so-well-concealed rollcage, but Jeff Axiak’s Falcon 500 gives no hint of what lies beneath. It’s got more grunt than an angry rhino. 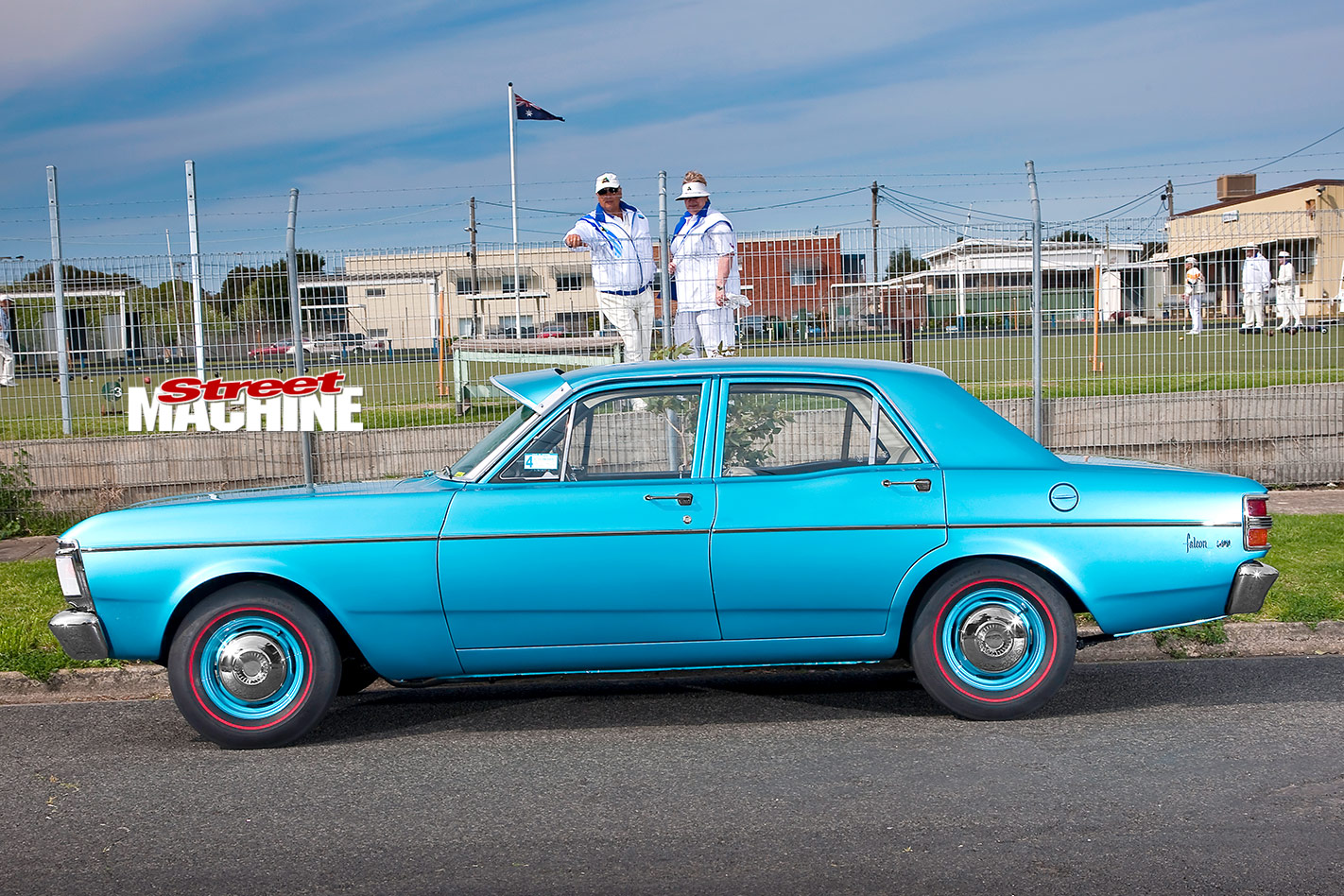 Jeff’s no Falcon virgin; he’s been to the circus and ridden the ponies before. His first muscle car was an XW Fairmont GS he restored when he was 18. It was a cool-looking machine and won some trophies but, as it goes with most of us, he got married and the car moved on. Eighteen years later, the desire returned and with a bit more cash available he was ready to build something special. 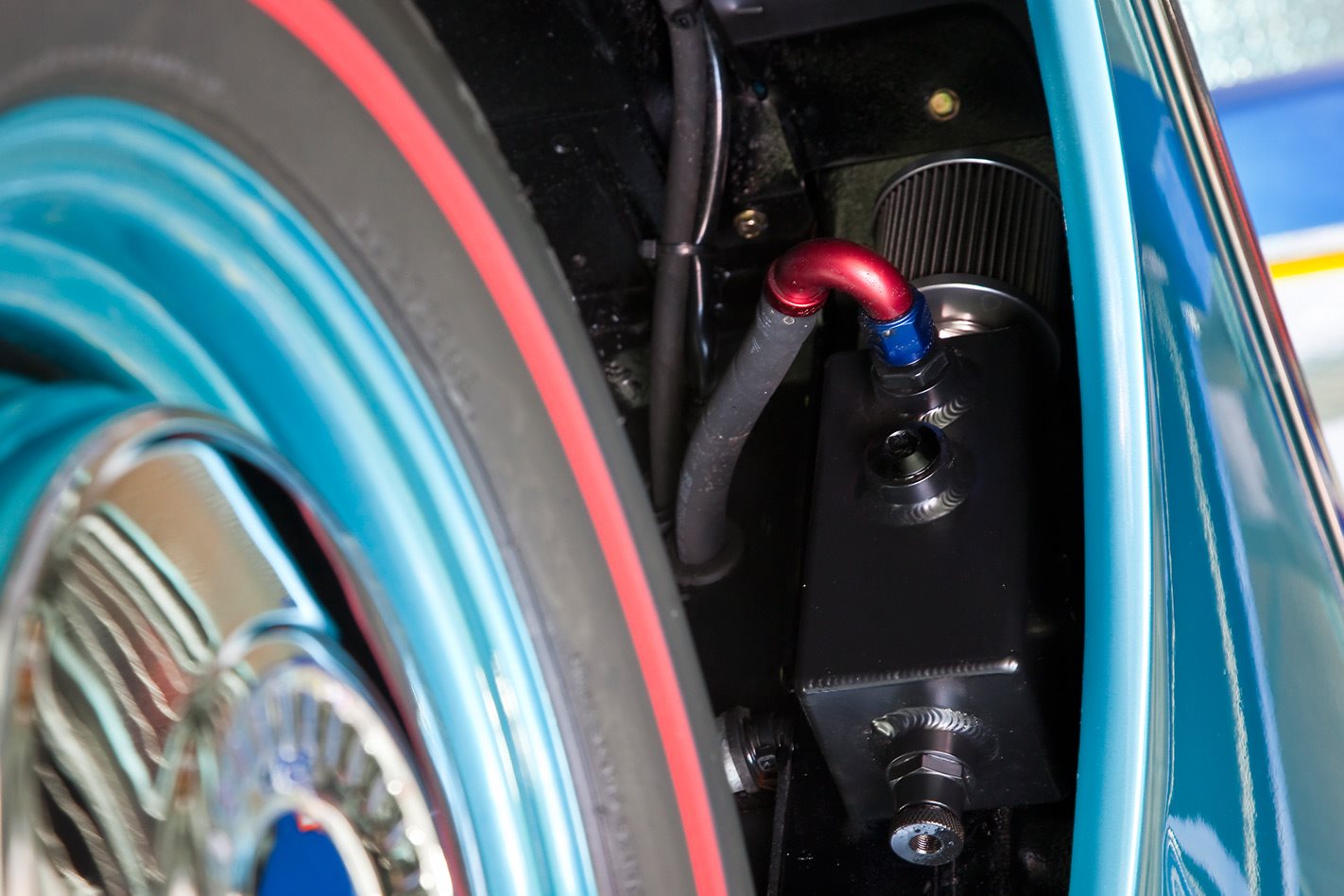 “I’ve always had a bit of love for the Falcons,” he says. Not surprising really, seeing as his dad still owns the XT Falcon he bought new in ’68. “But I thought I’d go for a Falcon 500 this time. That’s what I was looking for when I found this.” 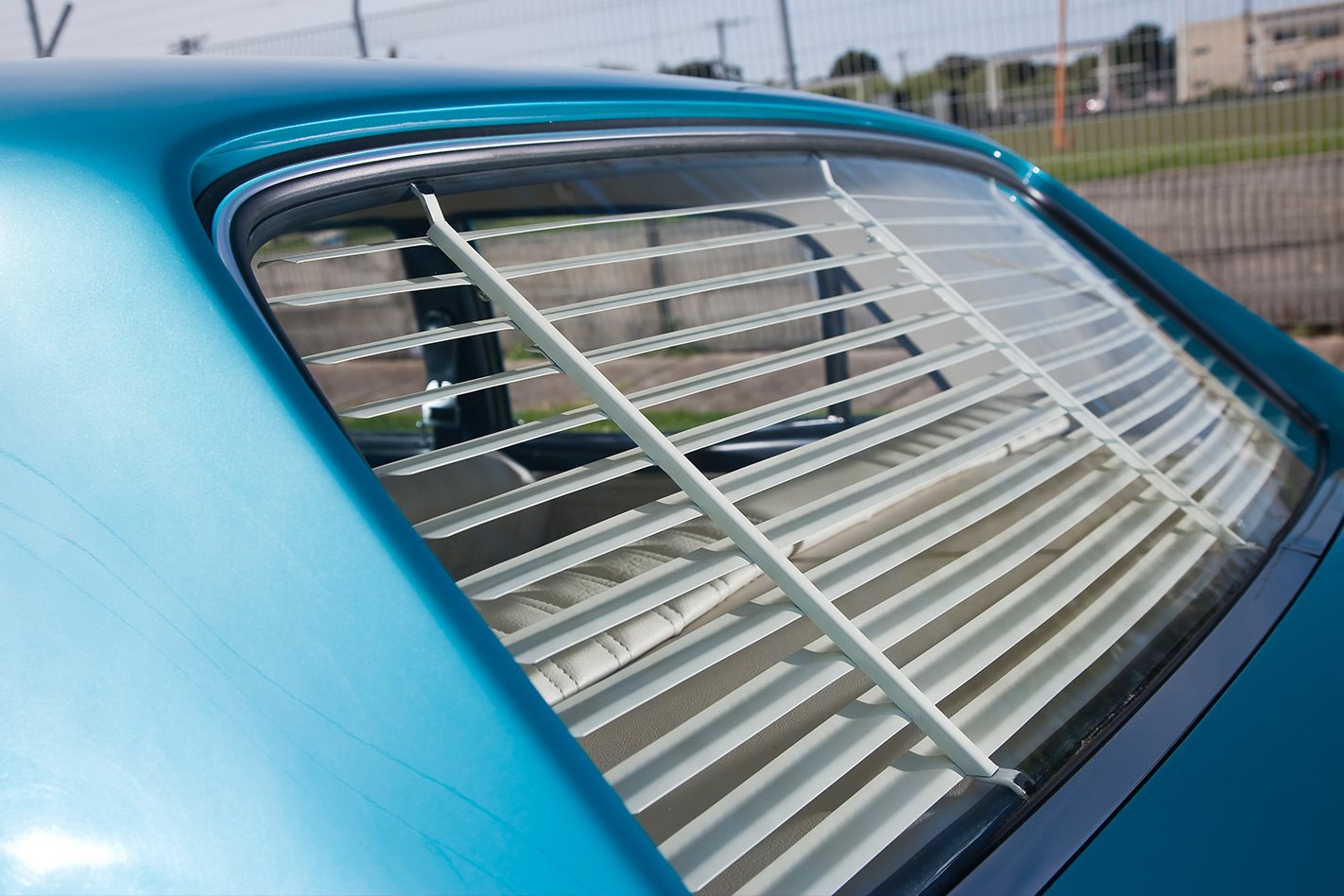 And what a find it was — a genuine little old lady’s one-owner XY 500. It was only a six-pot with column auto but it had bucket seats and the body was pretty good.

“She couldn’t drive it any more so it had to go,” Jeff says. “It was just a genuine unrestored car.”

But it wasn’t perfect. This isn’t how Jeff found it; the colour’s original and that’s about it. 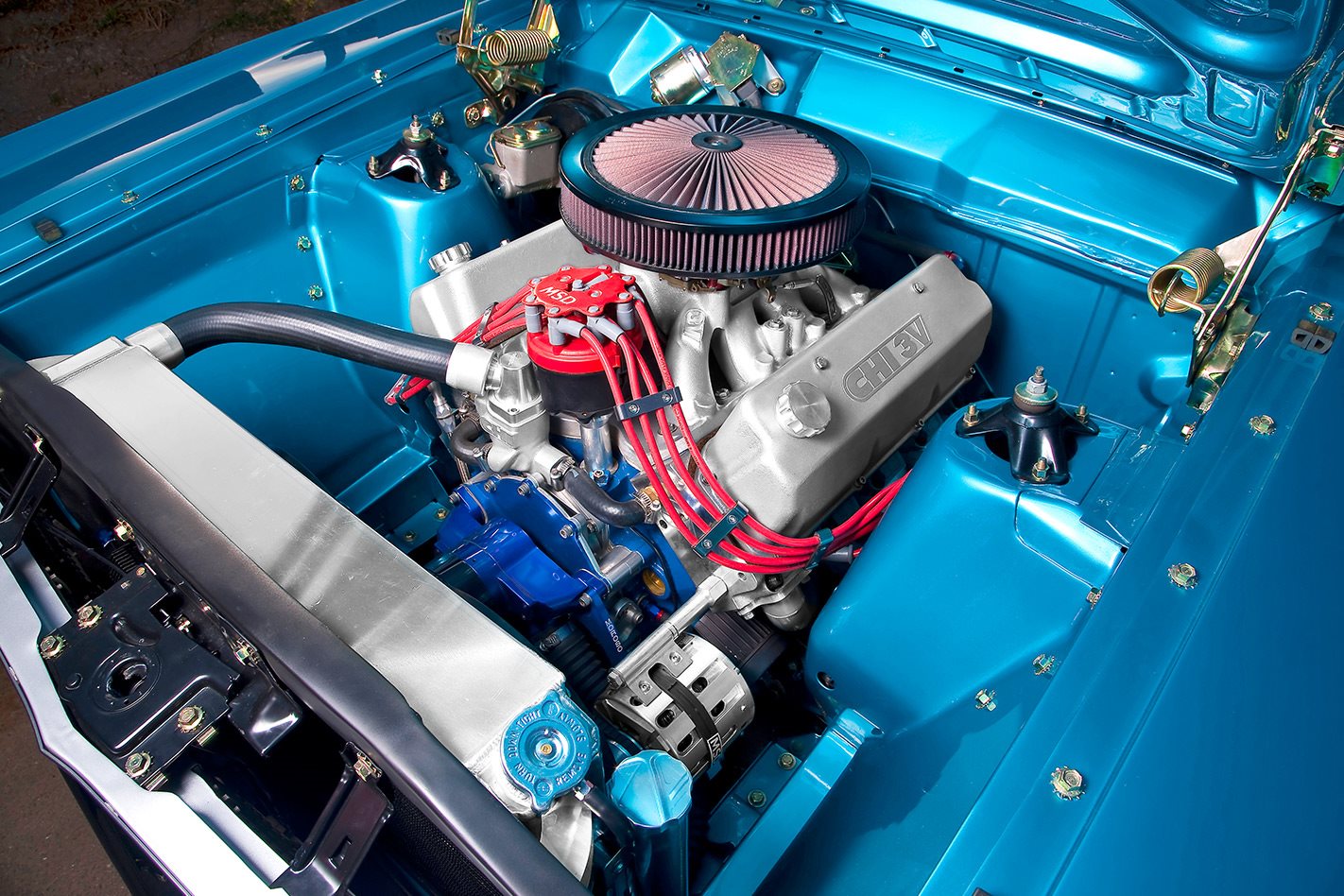 Pop the lid on this bad boy and there’s a surprise — 430ci of thumpin’ Ford, dyno-proven to deliver 680hp

He stripped the car at home and sent the shell to Vince at Auto Passion to rejuvenate the old metal and lay down a new coat of colour. It had rust in all the usual spots and took about a year to get the paint and panel sorted, which included a fairly major tidy-up in the engine bay. But while Vince coated it in the same Teal Glow paint that it left the factory with, no factory Falcon 500 ever looked so good. 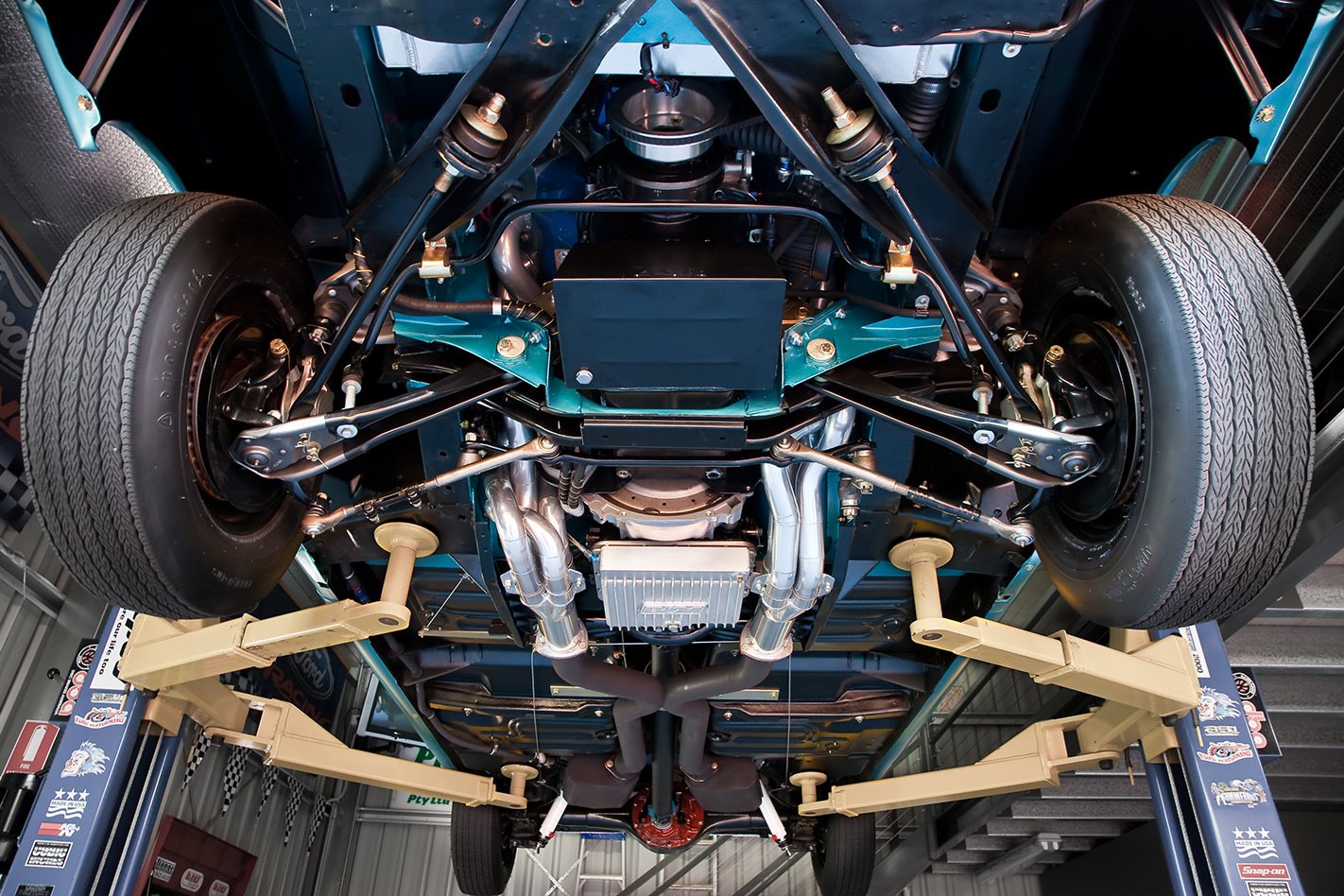 “I wanted something different because everyone goes for a mock-up GT,” Jeff says. “It wasn’t easy keeping it stock — even as I was building it, I kept thinking of making it a GT.”

Thankfully he was able to keep to the original plan, which included some serious horsepower under the bonnet, though he admits he never intended it to be quite as serious as it turned out.

“It blew out of proportion. I just wanted something with a bit of power and now it’s got more than enough for me.” 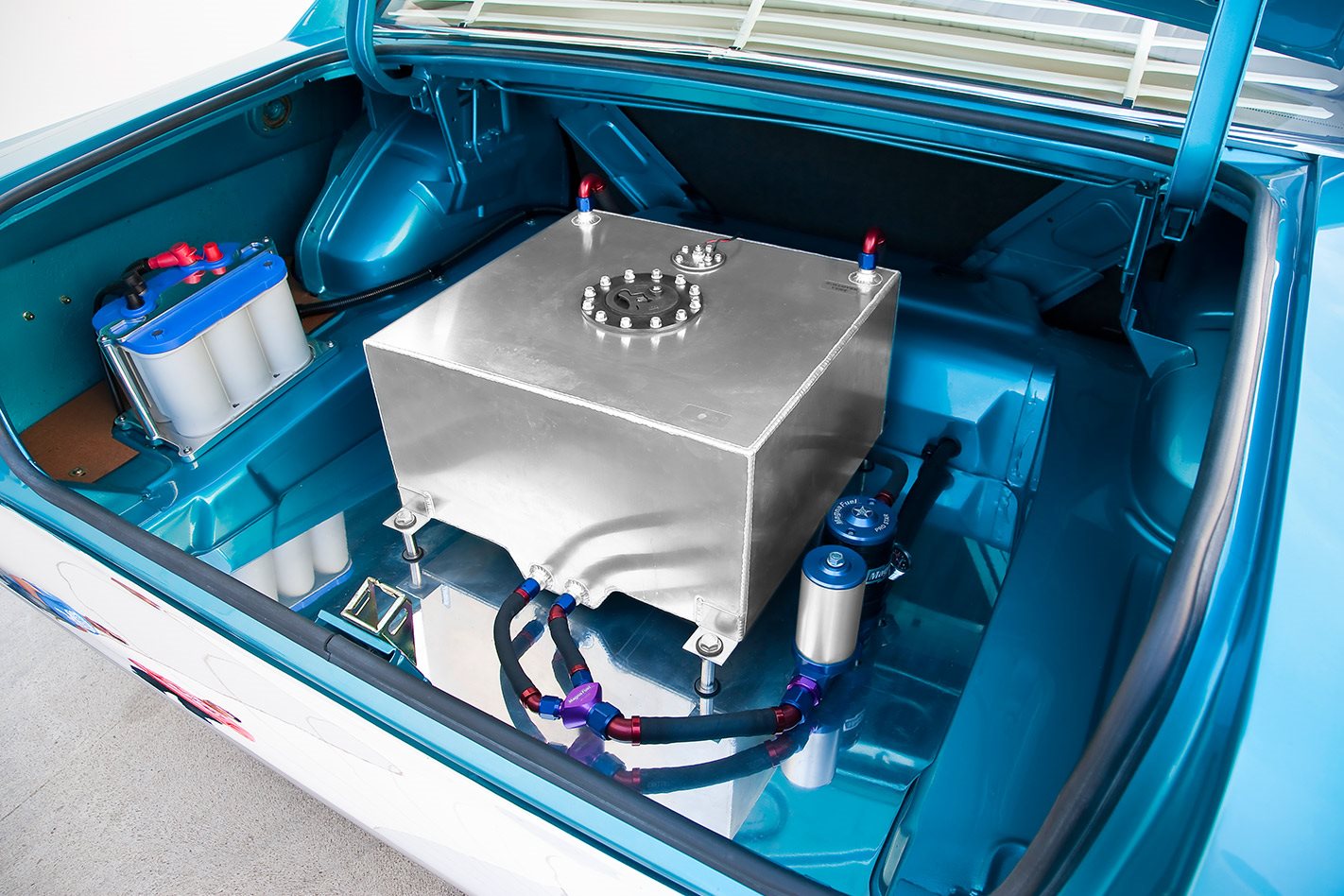 The back end is tidy too, with a 60l fuel cell, Magnafuel 500 pump and an Optima dry cell battery

The plan was to find a good Clevo block and build that up but good blocks are getting harder to find so he decided to buy a new Dart block instead, and fill that with all the goodies. Zoran from Competition Engines knows his way around a fast Ford donk and built a nice 430ci pump gas street engine to drop in his sleepy XY. Nothing too serious, just a healthy 680hp tyre-shredder! 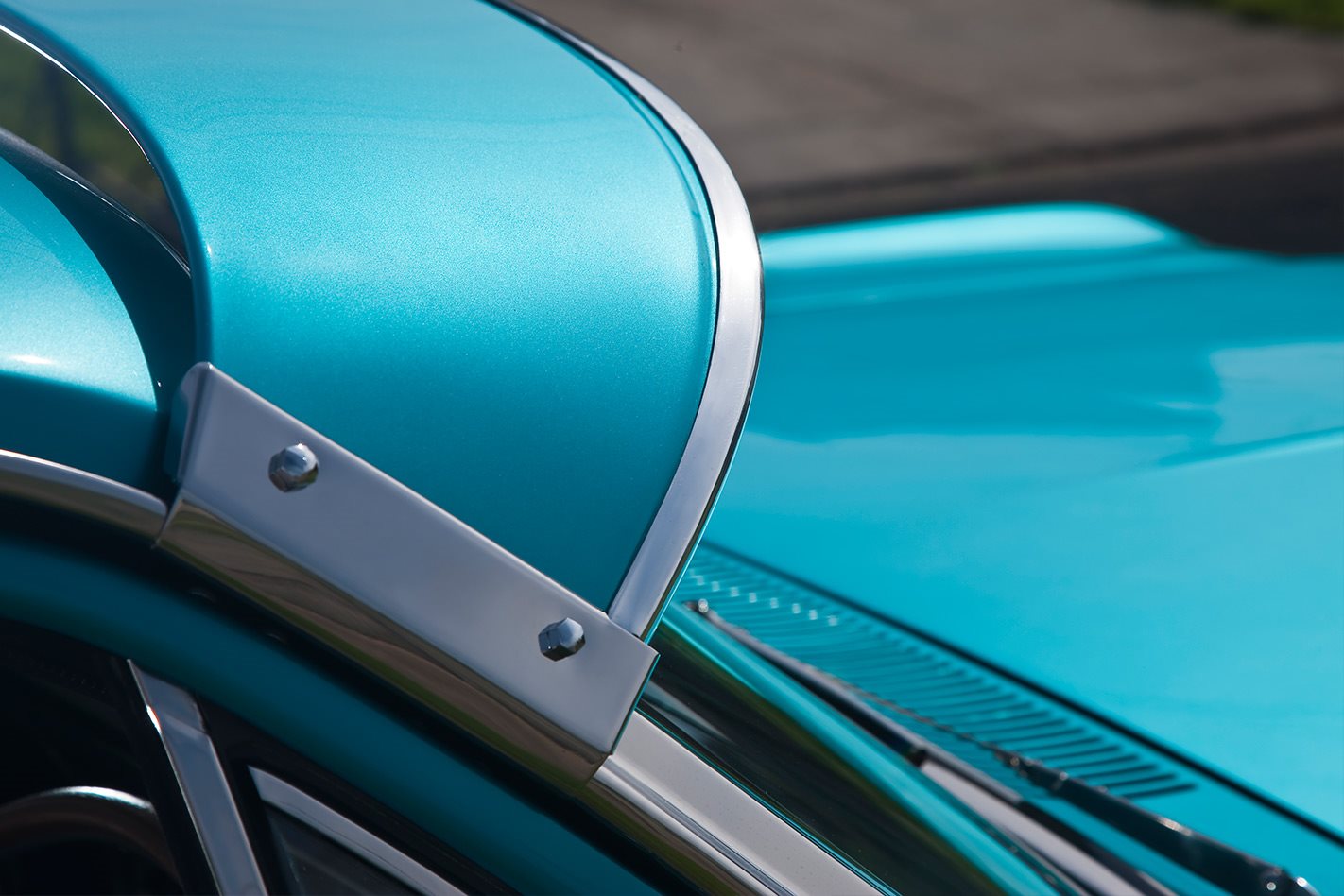 Look at the tyres, then at the engine and now back to the tyres. Feeding a dyno-proven 680hp through a pair of 6in-wide Firestones is the essence of futility but Jeff doesn’t care.

The exhaust isn’t super-loud — he reckons it’s “just nice” — so with the stock appearance and a subtle exhaust note he can stay under the radar around suburban streets. A 5200rpm converter and Powerglide tranny mean the revs start to climb on the freeway but even that doesn’t faze him. 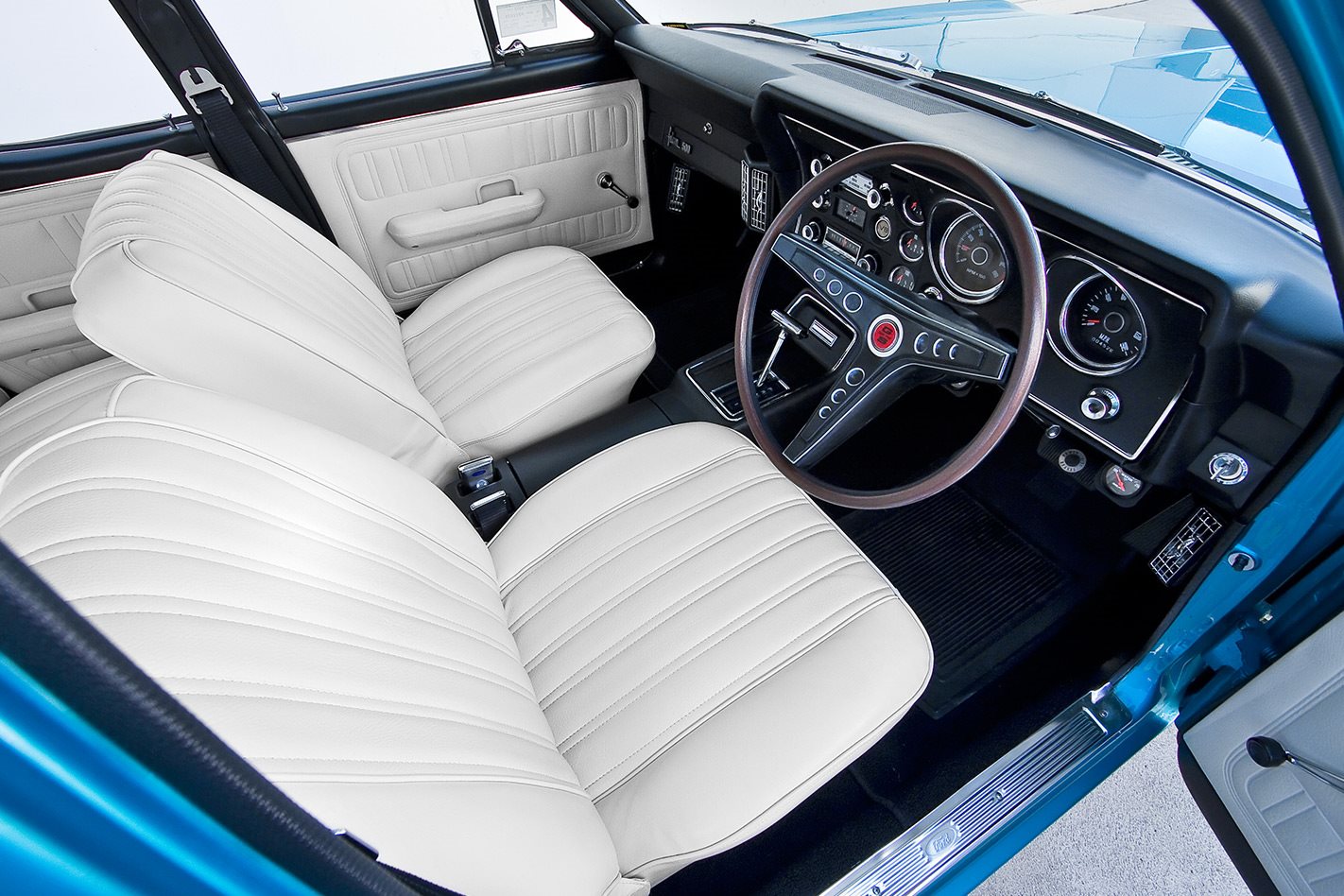 “I generally just cruise at 80 in the slow lane at 3000rpm,” he says. “Then you get the young punks in their Commodores. You give it a bootful and they give you the thumbs-up.” 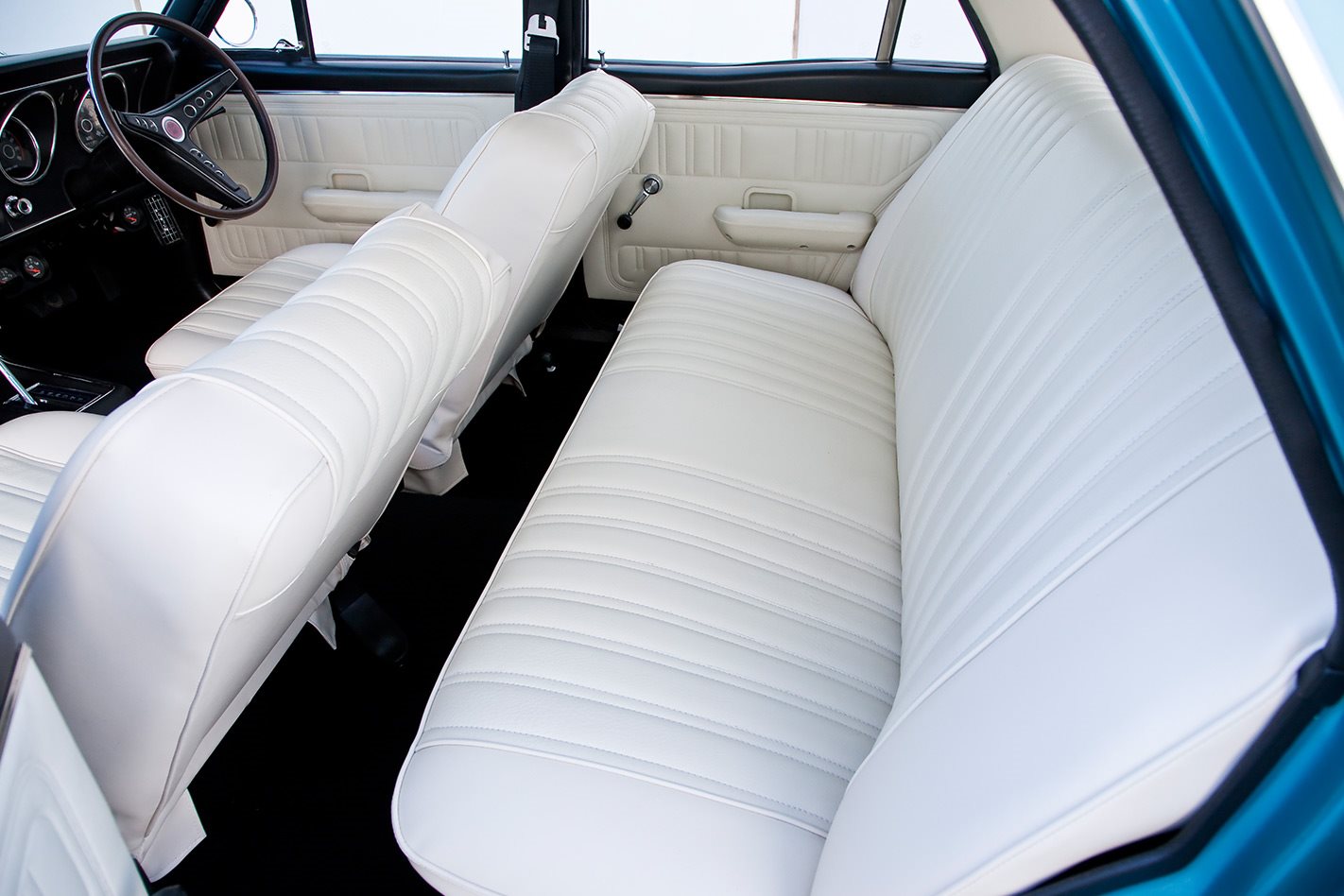 Jeff loves to shock people at car shows too. “You lift the bonnet and it’s like: ‘Oh shit!’ I made it look like everything’s standard but when you look in the boot or engine bay, you know it’s something special.”

Does it have a time slip to match that power figure? 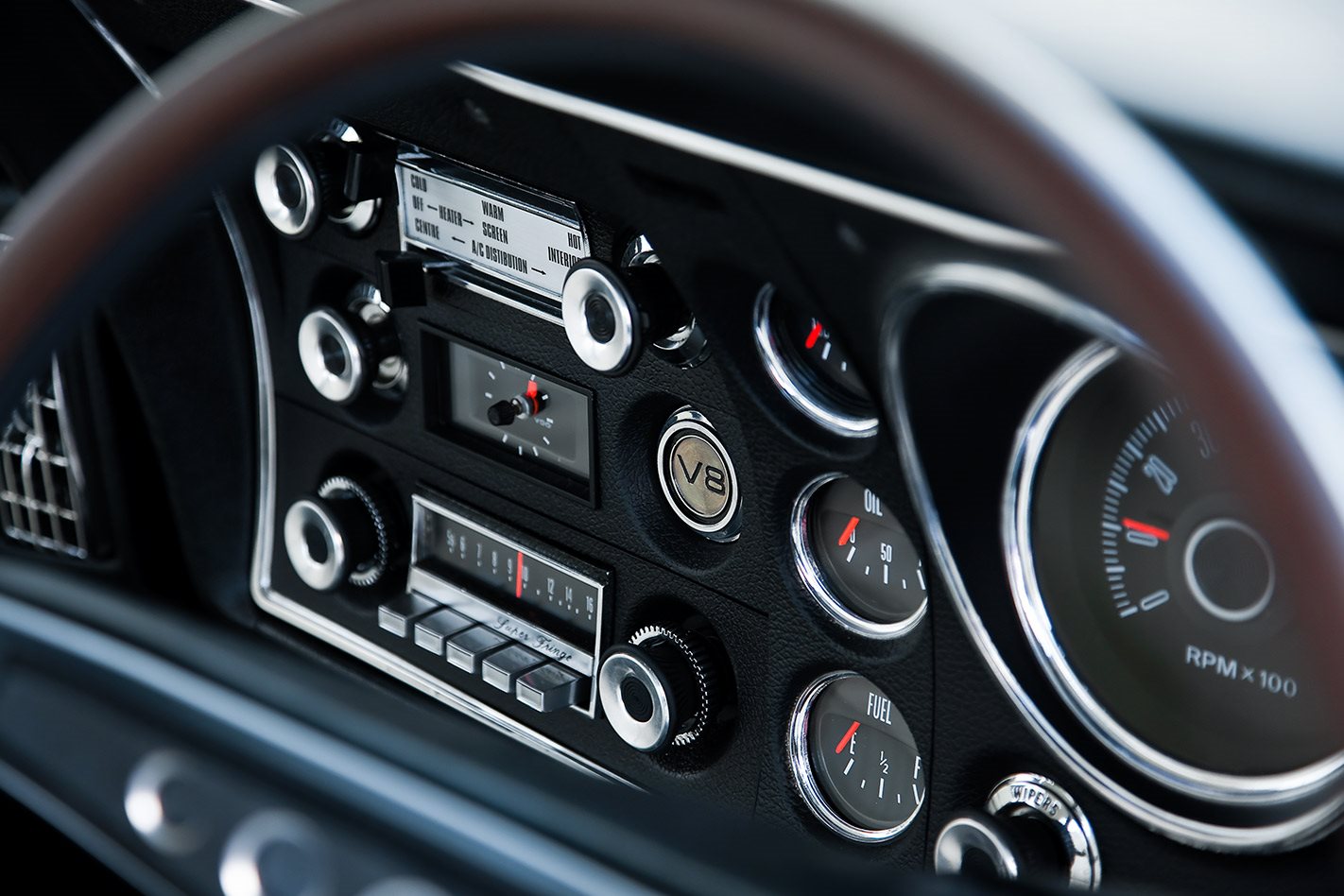 “Not yet. My brother-in-law has been twisting my arm to take it out. It’s guaranteed to run low 10s — not with these tyres obviously — but it’s got a low 10 in it. But I didn’t particularly build the car to drag it. I’ll just enjoy it for now.

“Turbos have crossed my mind but it’s big bucks. And it’s never enough, no matter how much power you’ve got. It’s like a sickness.” 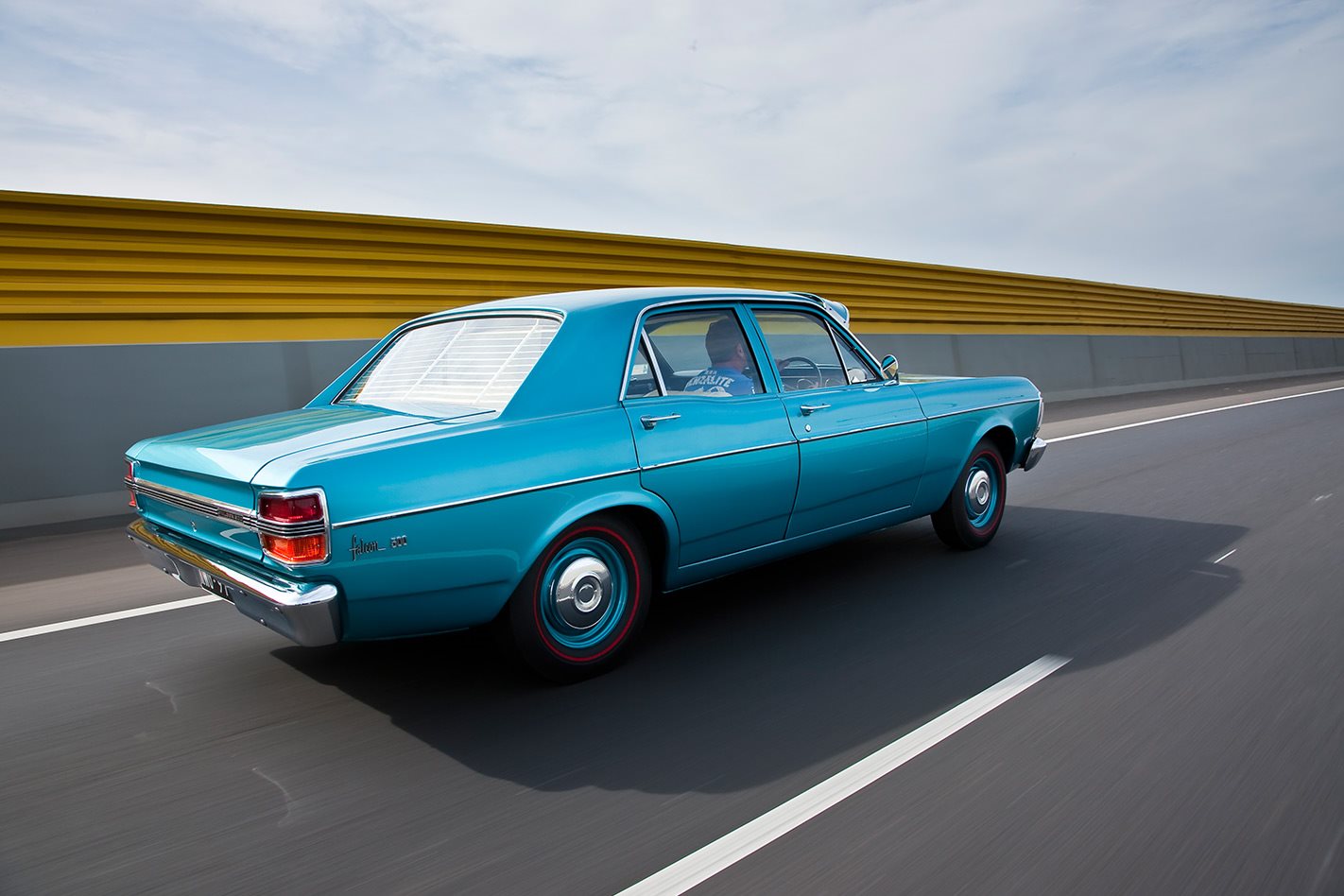