Just another Ford XY GT replica? Wait until you see what's under the bonnet!

IT’S nice to come across a surprise package now and again. You see something and think: ‘Oh, that’s cool’ and then it turns out to be 10 times cooler than you thought. Like Anthony Fonti’s XY GT replica.

It’s a pretty cool ride. After all, who wouldn’t want a Vermilion Fire GT in their garage? But pop the bonnet, noting that the polished GT shaker lifts with the rest, and — shazam! — eight trumpets’ worth of fuel-injected madness are revealed to the world. And if that isn’t cool enough, the GT also sports a six-speed manual and big-arse brakes. Ten times cool.

It all started way back when Anthony was a young bloke working in a car dealership and an XY sedan came in as a trade.

Anthony recalls. “I brought it home, pulled it all down and it had so much rust. Me and my mate were on it for three or four months and we put it on the rotisserie and it was like: ‘You’re kidding me.’ All inside, the wheelarches were full of it. My mate goes: ‘You’re better off just getting rid of it,’ and I did. I was heartbroken and I’d had enough.”

At that stage Anthony was ready to sell all his parts and forget about XYs but then he heard about a few Falcons in a shed owned by a friend of a friend. So they had a look. Most of them were worse than the car he’d already thrown away but there was one possibility.

Of course they checked it out and it turned out the car was a rolling shell that had been driven by the bloke’s father for 25 years and then put away. Dressed in Vermilion Fire, the XY Fairmont was as rust-free an example as they’d ever seen and equipped with a factory sunroof too. But the owner wasn’t budging.

“I gave him my number and told him if he changed his mind to give me a buzz,” Anthony says. “After a week he gave me a call and I picked it up for $5500.”

That was 16 years ago but even then that was a good deal for a rust-free XY body. In fact, the paint was so good they almost got away with leaving it alone.

Not what you expect under a shaker hood. The 373ci combo makes 485rwhp, runs on pump fuel and handles traffic without raising a sweat

“We took it home and buffed it up straight away. We were all keen and just around the sunroof we cut it back past the colour.”

Anthony reckons if it hadn’t been for that, they’d have dropped a motor in and gone with it but a mate, John, is a painter so they rubbed the whole car back and gave it a fresh coat of the same hue.

From there it was a simple matter of adding a 373ci Clevo stroker with a single four-barrel, a C4 with a 4000rpm stall and a nine-inch diff.

For almost 15 years that was good enough but then Anthony spun a bearing over-revving the healthy small-block and a new powerplant was needed.

With a fresh block to hand, he had Paul Sant from Pro Flo Performance build another motor. He wanted the same cubes but added TRW forged pistons and some 5.7in H-beam rods for extra reliability. They also ditched the cast iron 4V heads for a set of aluminium CHI 3Vs to help pull heat out of the combustion chamber, as running cast iron heads with 12:1 comp was causing too many dramas. It was okay back in the day but avgas isn’t legal any more, so Anthony needed something that would run on pump fuel.

“Back then it made crazy power,” he says, “but after a couple of sets of lights it would start overheating. With the aluminium heads and big radiator it’s a dream.”

For the EFI system to keep up the supply in an older car, the fuel needs to be pumped to a surge tank first. From there, Anthony has two Bosch 044 pumps supplying juice to the front

The plan was to stay with carby induction but that fell apart once Anthony checked out a mate’s hatchback Torana with eight-throttlebody injection. It was like a switch had been thrown.

So Paul set him up with a DC&O intake, four custom twin 50mm throttlebodies, plus a set of 42lb injectors. Then Adam from Just Engine Management prodded the MoTeC M48 ECU to the tune of 485rwhp horsepower — nice numbers for a small stroker Clevo with no added boost.

RRS got the nod to bring the XY’s handling and brakes up to scratch, including six-piston brakes up front, power rack and pinion steering, and coil-over struts

With the motor sorted, it was time to get busy with the gearbox. That C4 slushbox had to go because Anthony was sick of driving around with the engine revving its guts out at 90km/h. Sure, he could have changed the 4.11 diff gears but where’s the fun in that? Better to chop the tunnel out, expand and raise it a tad and then slot in a T56 six-speed ’box from a late-model Falcon.

Sounds easy when you say it like that but fitting the six-speed took a fair amount of work — the tunnel needed to be raised all the way to the rear.

Anthony stuck with the ‘updated factory muscle car’ theme in the interior, keeping strictly to subtle updates such as the central handbrake, retractable seatbelts, B&M shifter and Auto Meter gauges

“I modified it all the way to the back because the car sits so low that, with the four-inch tailshaft, it was rubbing when you put a few people in the back.”

Dellow Automotive came up with a suitable bellhousing and one of Anthony’s mates created the custom tubular crossmember at the back of the ’box.The boys welded a pair of four-inch tube sections either side of the tunnel so the exhaust could run above the crossmember. It keeps the exhaust off the road and takes the headache out of speed bumps.

“On the freeway I can cruise at 120km/h in sixth gear and it’s only revving around two grand.”

This means the GT is a fantastic family cruiser, and Anthony’s wife and son both love the car. So much so that Anthony reckons he’d like to get an XY ute to build with the young bloke. 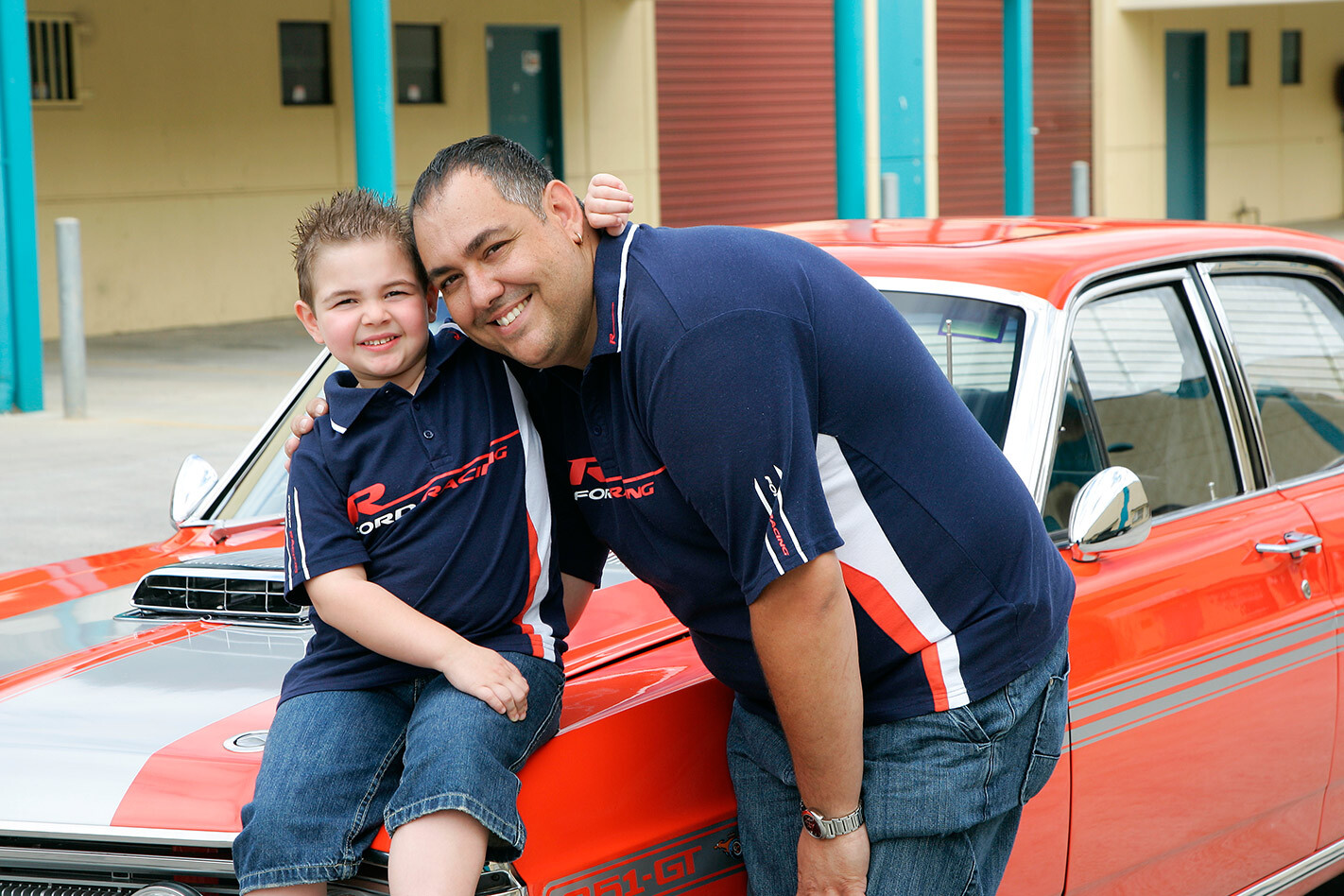