James Mackie transformed a Blue Oval classic XY Falcon into a tyre-frying drift machine, thanks to some motivation from the dark side

AUSSIES love smoking rubber; burnouts have been a true-blue rite of passage almost since the dawn of time. But some burnout fans with a little too much tyre smoke in their eyes may have missed that the drifting scene has also taken off in our own backyard in recent years. Competition prize pools have skyrocketed and events have even attracted V8 Supercar drivers like Shane Van Gisbergen to have a crack at sliding around a race track. Aussie drifters have pulled influences from the original Japanese masters, combined it with some Yankee ingenuity, and stuffed it all into homegrown cars in order to hit the track like no other nation. 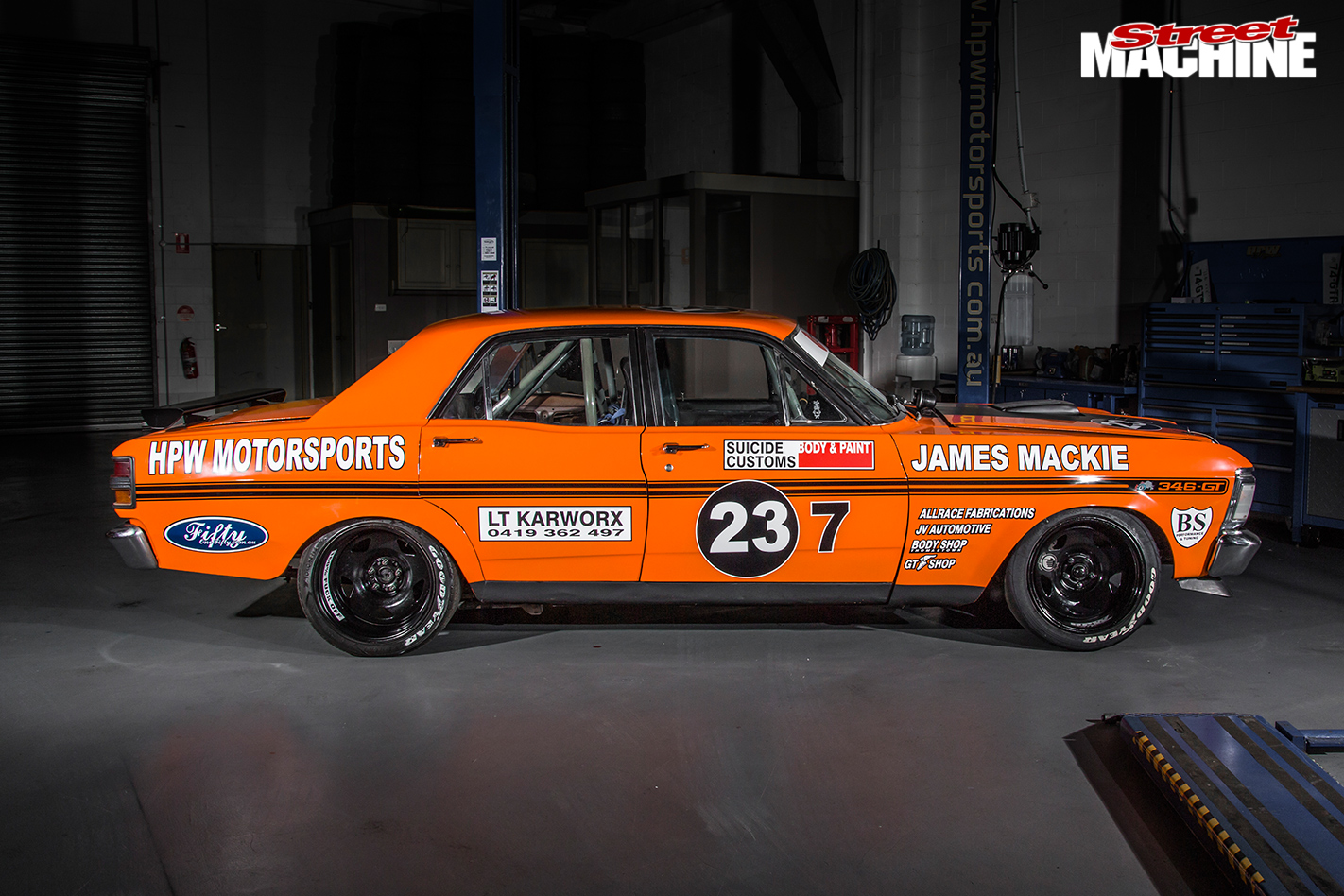 After a recent batch of bodywork and a coat of Raw Orange, the XY was given a retro-inspred look with a set of racing stickers - the 346 GT decals are a hint to the GM 5.7L LS1

This is how James Mackie ended up behind the wheel of an LS1-powered, four-door XY Falcon 500. Yes, you read that right. And as he says: Why not? Or in this case, XYYNOT?

James has been drifting for 12 years now, and started with a naturally aspirated EB Falcon. “It wasn’t enough, so I turboed it. It then made 280kW and broke 11 gearboxes; it was an animal to drive!” he explains.

At the same time, James had been planning to start an XW build with a shell he’d stashed away, but he ended up selling it before a wrench was turned. “Tanya, my girlfriend, was sick of me sooking about selling it. So she found this XY on Gumtree.” 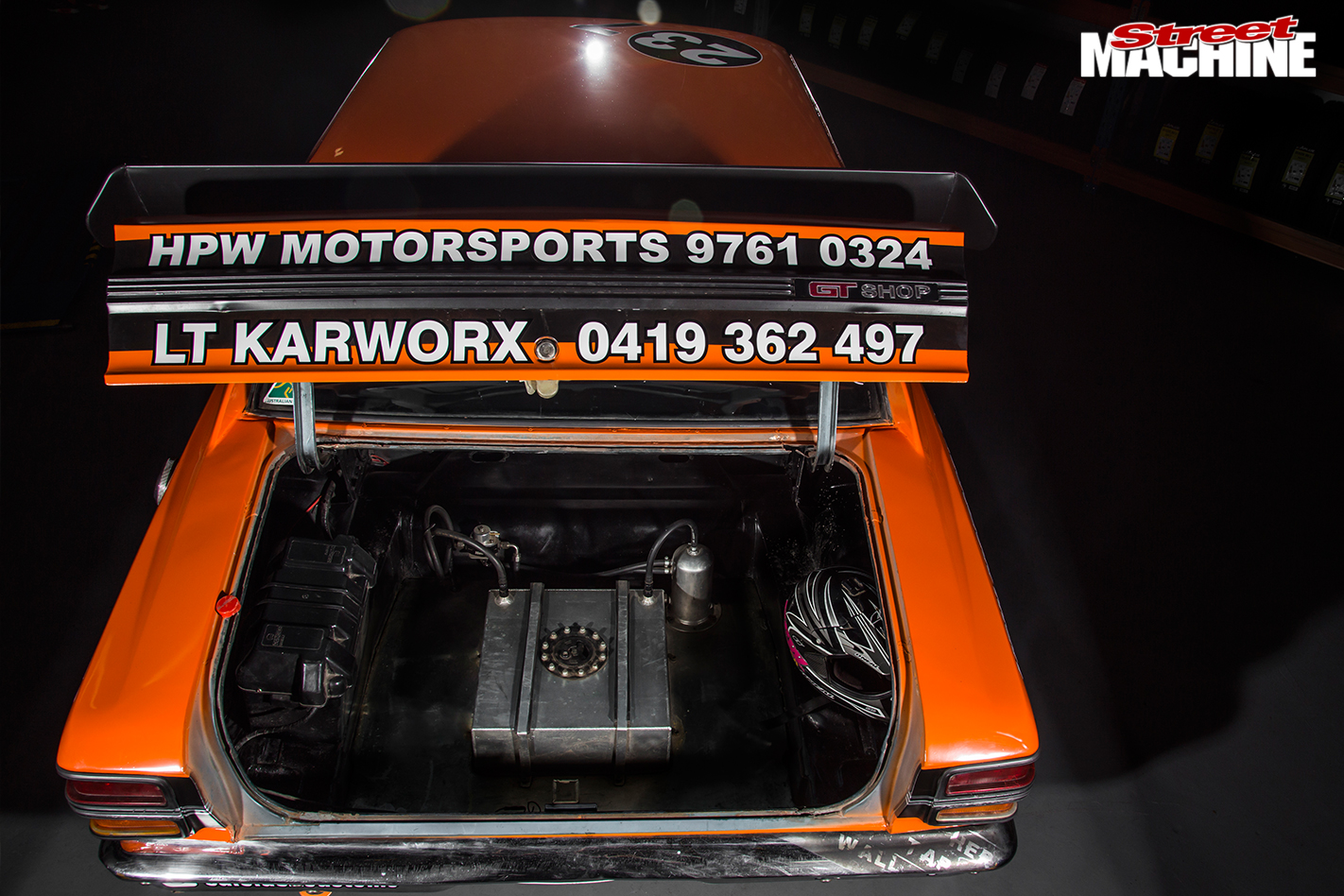 A 12-month build saw lots of mates with lots of cans crammed into a single-car garage in Melbourne’s outer eastern suburbs to transform the old paddock bomb into a full-on track warrior. “The aim of this car was to compete in all different kinds of motorsports with a basic set-up and be competitive,” James says. “I love proving people wrong when they think my car won’t do this, or it’s not set up to do that.” 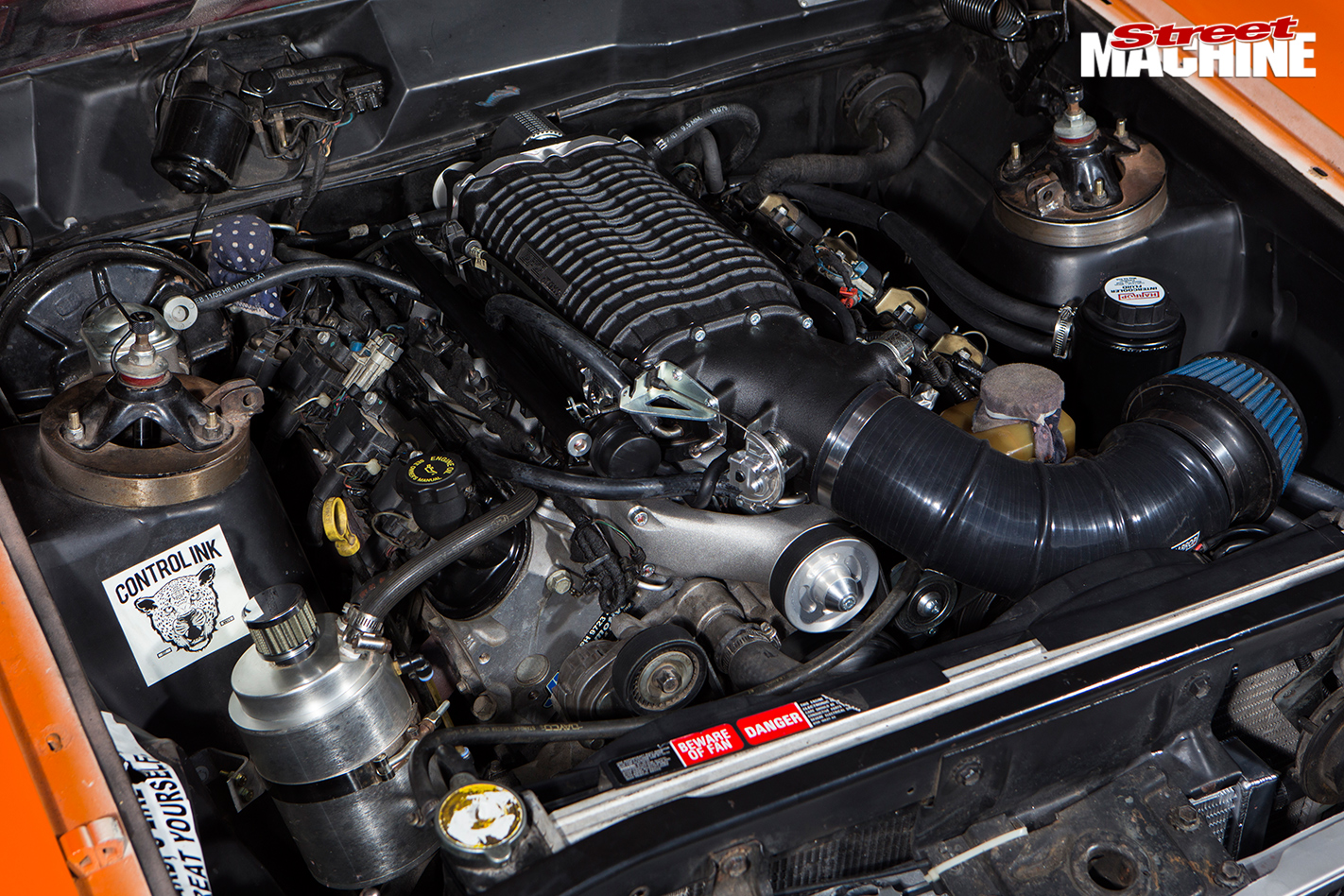 James is still using an ordinary 5.7L long motor, livened up by the VCM3 cam and a Harrop 2300 blower, though he plans to build an engine down the track

As for the inter-factional heart transplant? Well, that came about when the turbo EB Falcon donk wouldn’t agree with the XY’s engine bay, so James turned to GM power, making the call to bolt a 5.7L LS1 from a Holden into the front of the Falcon. It was given a tickle-up by JV Automotive with some VCM parts like the VCM3 bumpstick and upgraded valve springs, but remained mostly standard until a couple of months ago. 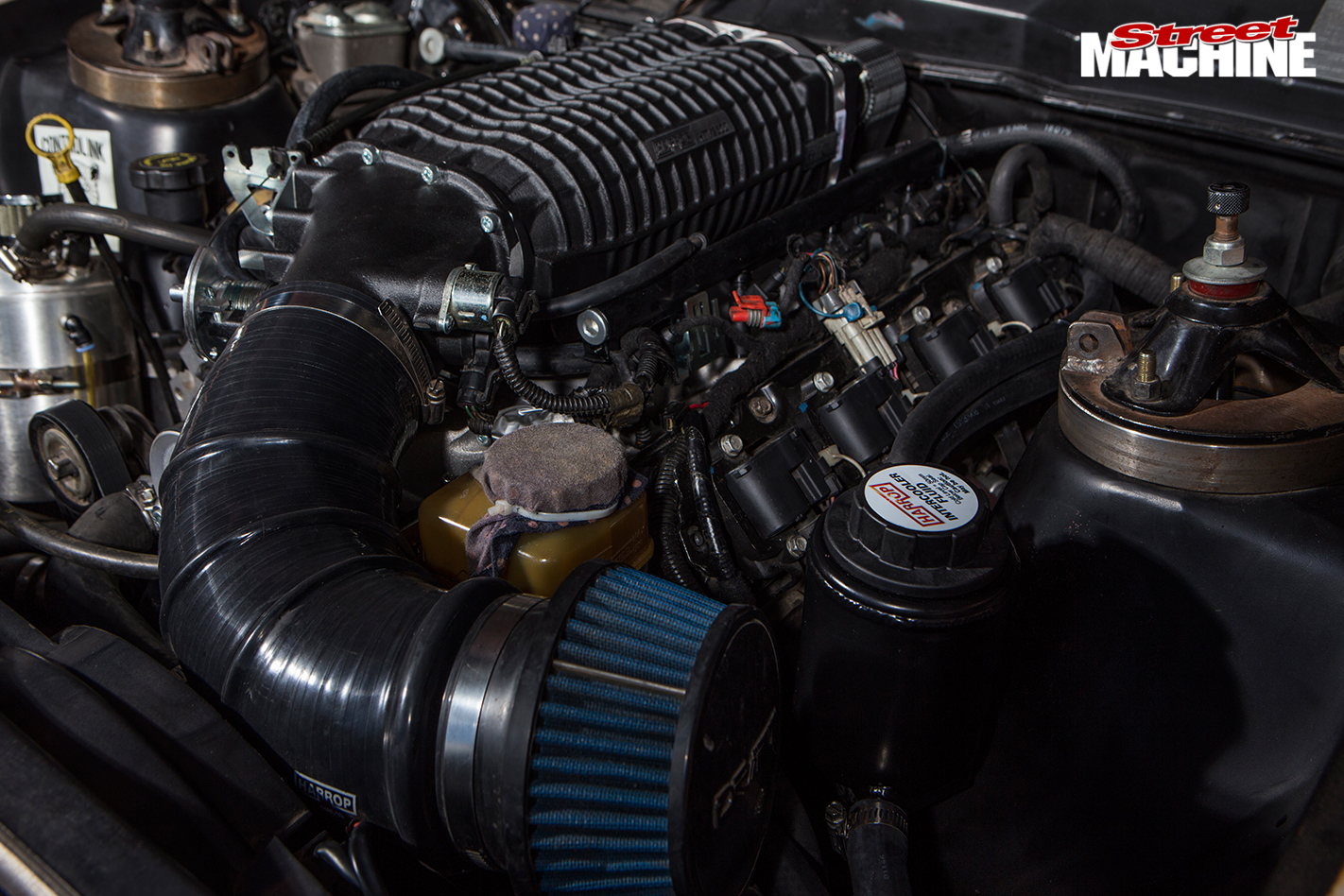 The XY is an absolute powerhouse now thanks to a Harrop TVS2300 blower kit, with supercharger, intercooler, fuel injectors, and belts all supplied for James to drop on top before baking tyres like nobody’s business.

“It is an animal, mate!” laughs James.

“I couldn’t wipe the smile off my face when I took it out for the first time.

It’s faster and grippier and just has so much torque!” 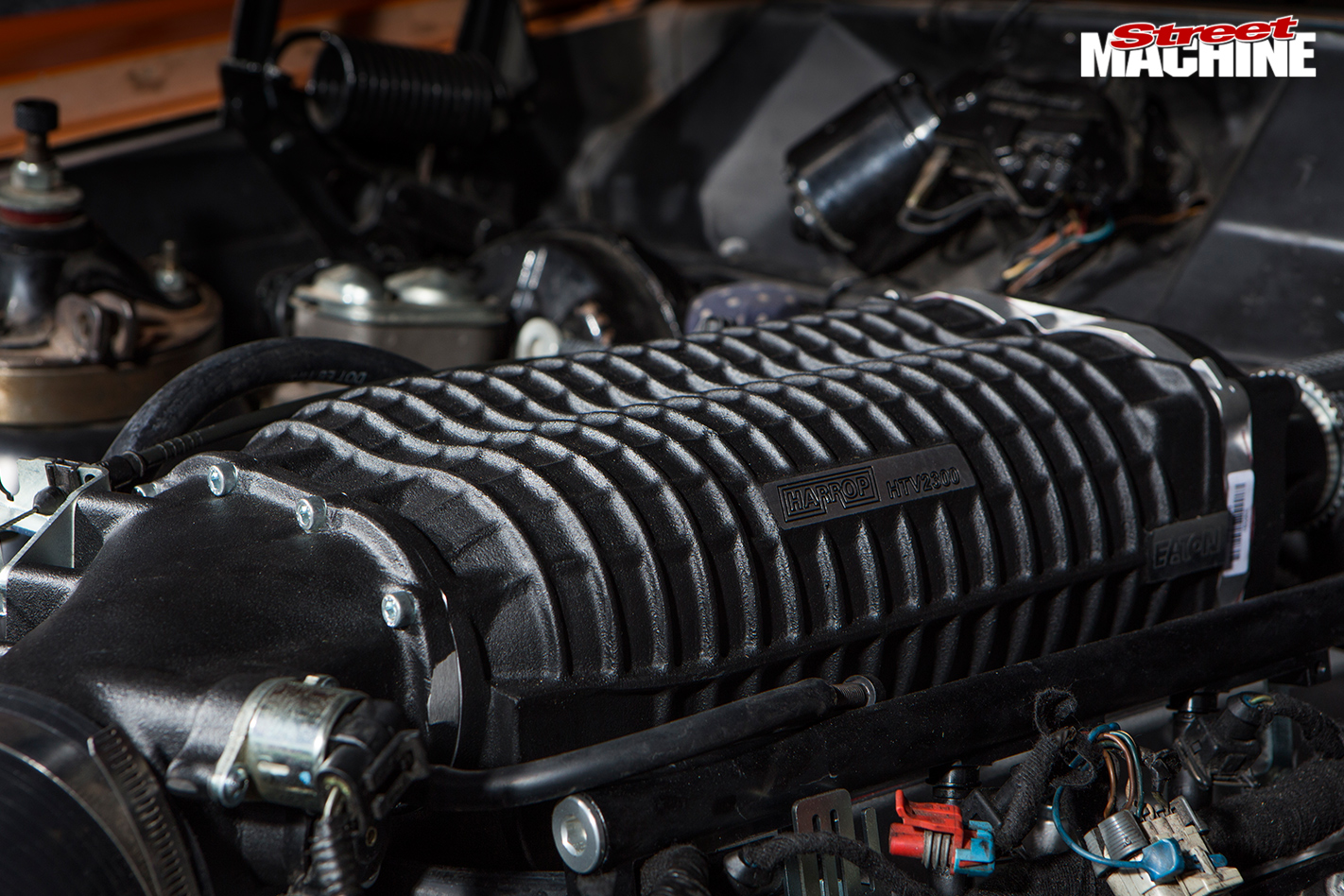 The LS is still mated to a standard GM T56 ’box, which is popular with drifters the world over for being able to handle rude amounts of abuse. Drifting has a high rate of attrition, and when it comes to staying on the track for a whole season, sometimes the best option is to ‘keep it simple, stupid’. 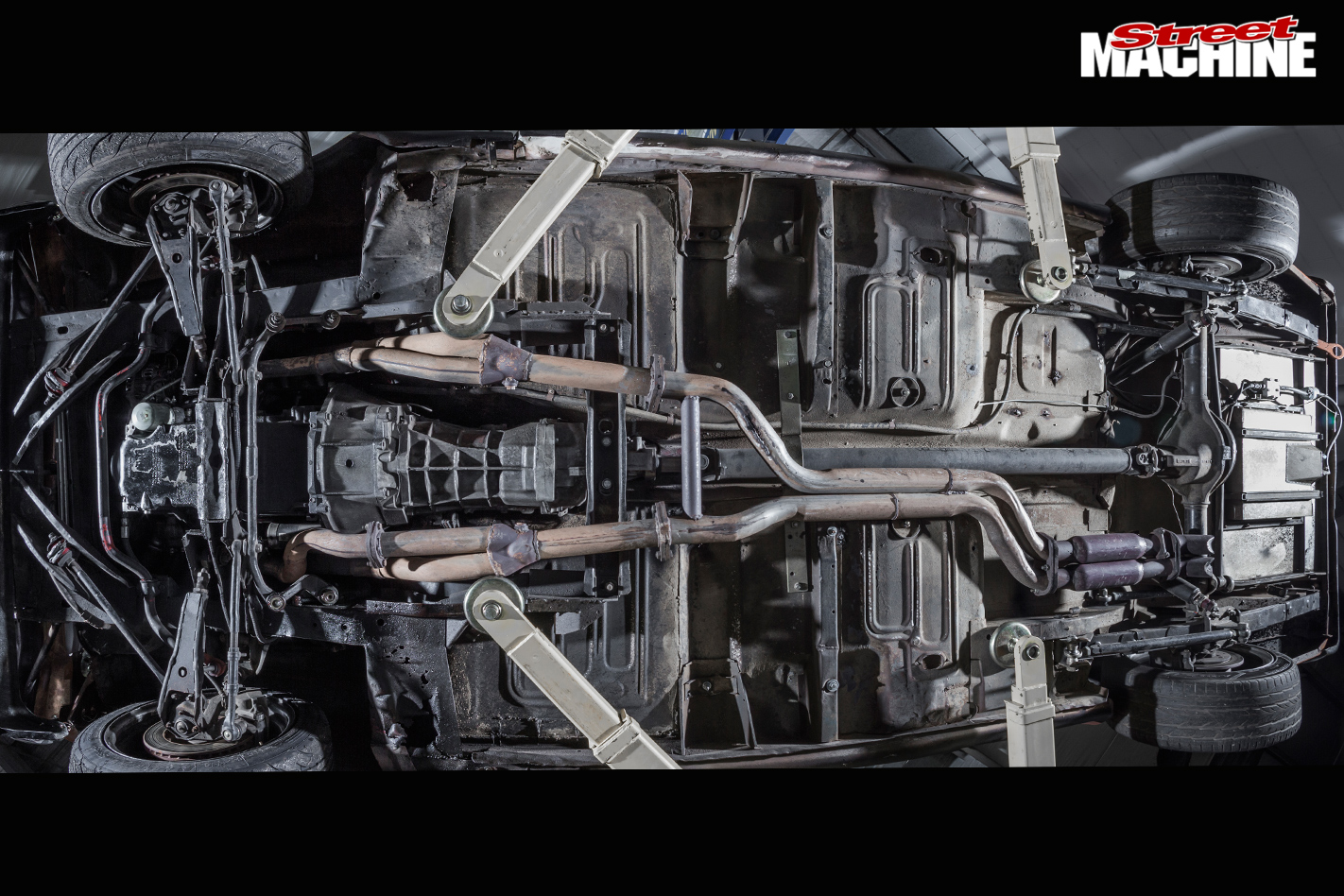 Behind the standard T56 'box is a custom tailshaft mated to a shortened BorgWarner full-spool diff with 31-spline axles and 3.99 gears

The same idea follows underneath the car, with some Shockworks shocks and Nolathane bushes about the only aftermarket additions to the rolling chassis. Standard Ford brakes provide enough ‘whoa’ if needed, and some expert tuning and a modified XF steering box allows James to work his craft, pitching the car in at crazy angles while keeping everything steady and in the right direction. 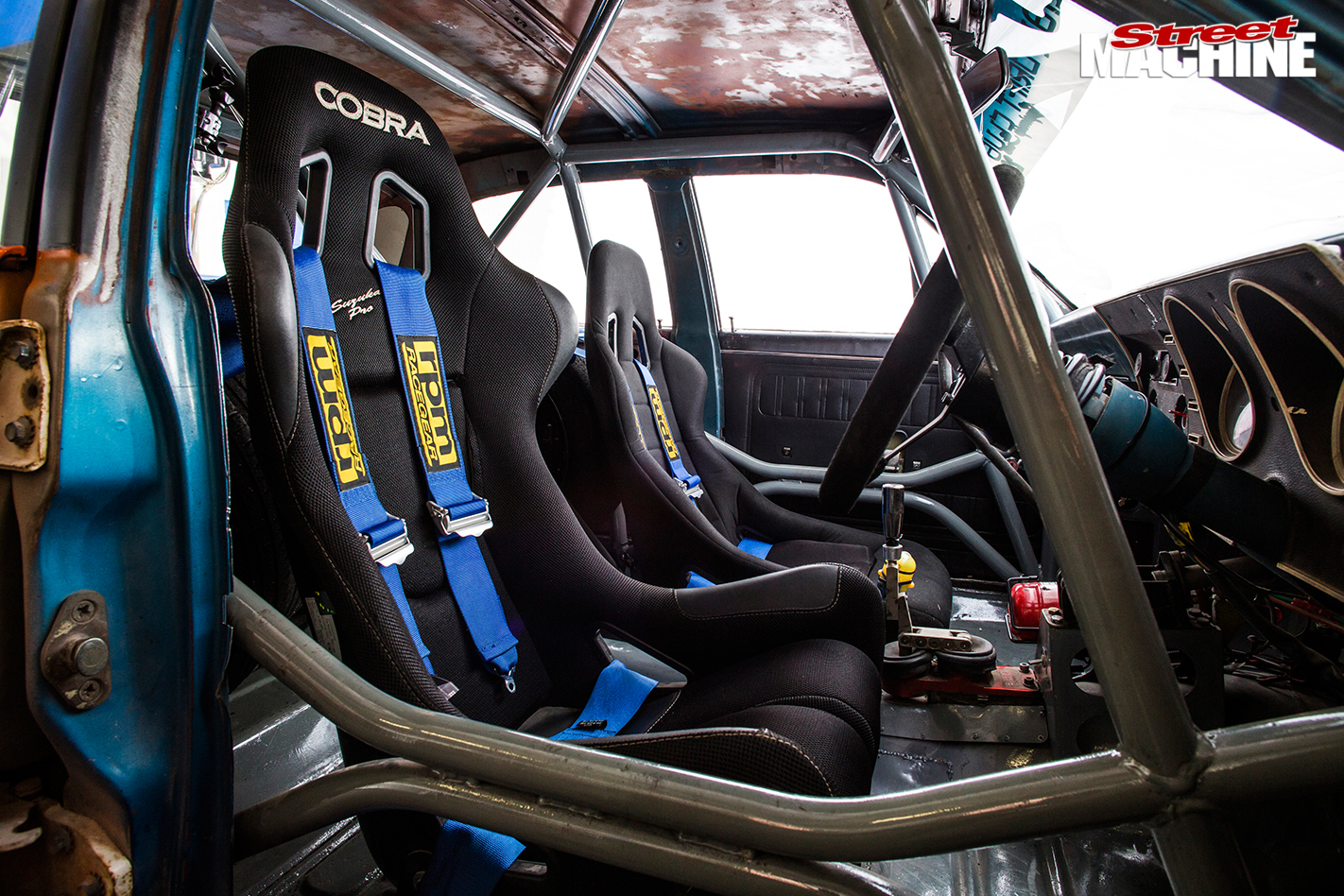 Gone are the classic bench seats, replaced with Cobra buckets and a CAMS six-point rollcage snaking around the cabin

The inside is fitted with a host of drifting goodies like bucket seats, a racing tiller and a hydraulic handbrake that helps lock the rears quick-smart in order to initiate some sliding or maintain those long smoky drifts. There’s also a six-point CAMS ’cage and four-point harnesses to keep James safe should it ever go shiny side down. 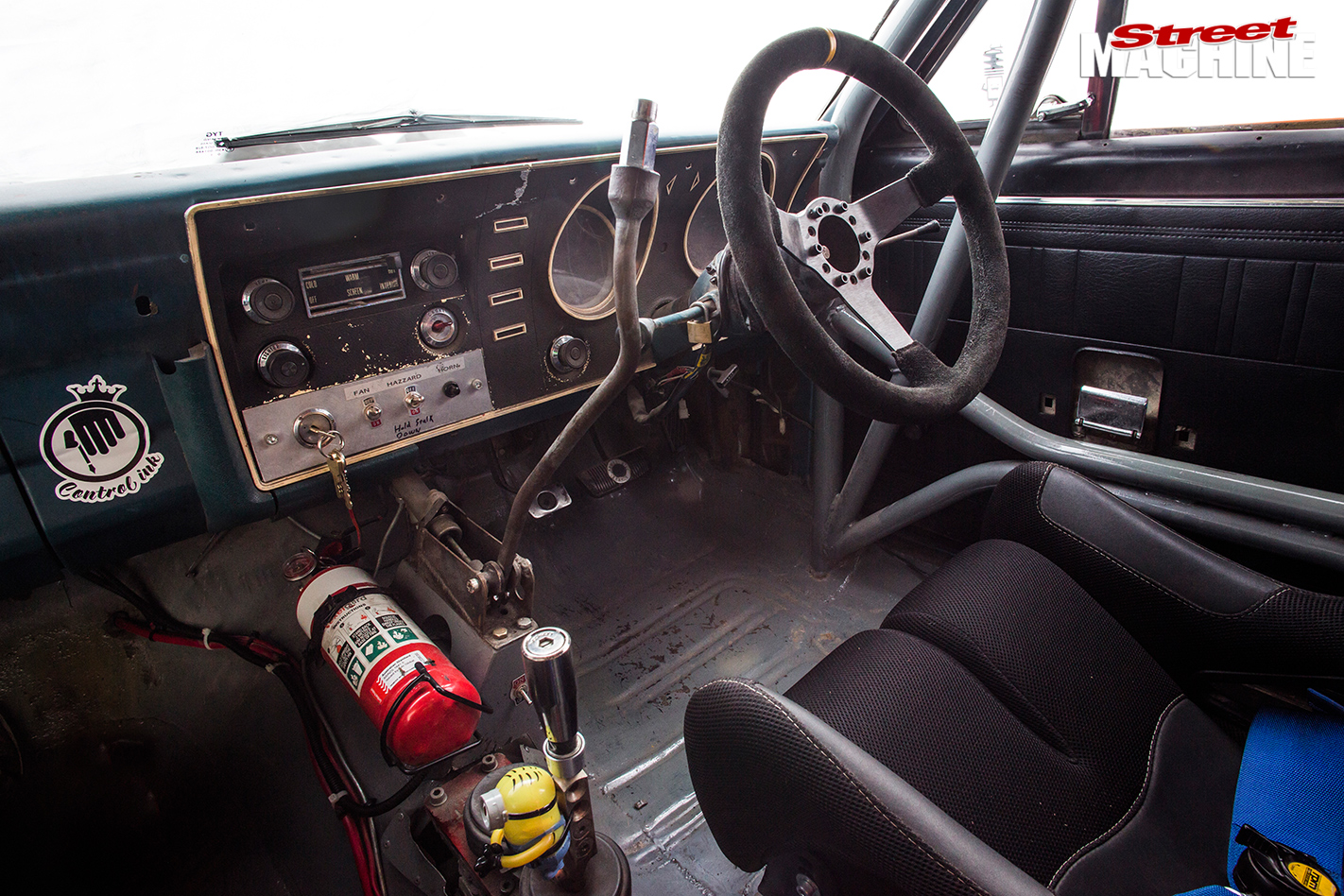 The Falcon hit the track for the first time in mid-2013, and it wasn’t without its difficulties. “The first session was pouring rain, and I found out the hard way,” James remembers. “The steering bound up and threw the car towards the wall on two occasions.”

After more testing and tuning James began making headway and started putting the car through its paces, entering the burnout competition at PCM and making the finals, and later that year running a 12.2@113mph at Calder on borrowed slicks. He backed that up the very next day with a few passes at the Haunted Hills Hillclimb, where he nearly got booted for too much, er, traction loss. 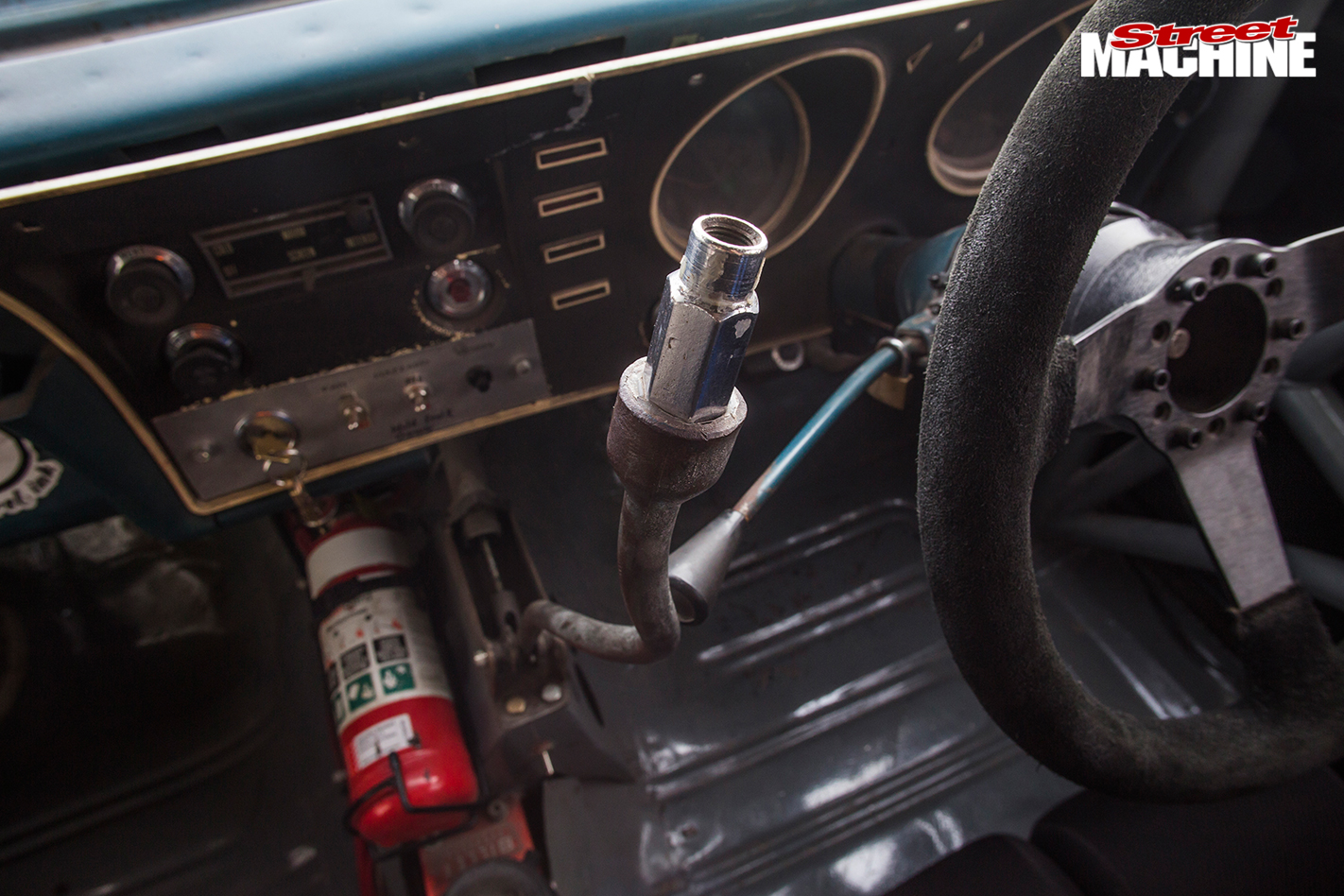 The tyre lever is a personal touch that actuates the hydraulic handbrake, used by drifters to enable rapid and strong lock of the rear wheels

After a spate of broken axles and a bit of tramping, the XY was treated to a modified BorgWarner full-spool diff with 31-spline axles and 3.99 gears, built by Allrace Fabrications to help James settle things down.

Thanks to the ease of use afforded by GM’s modern small-block, and a stellar crew of wrenchers and body men, the Falcon has managed to stay mostly intact through multiple VicDrift seasons, not to mention countless drifting demos at events like Springnats, Tread Cemetery and Xtreme Powerfest. Some sponsors have cottoned on to James’s stand-out performances, with HPW Motorsports and LT Karworx recently signing on to help out with the season’s efforts, which has cushioned the blow on James’s wallet now that he’s a ‘drifting dad’ thanks to Tanya and their little girl Indie. 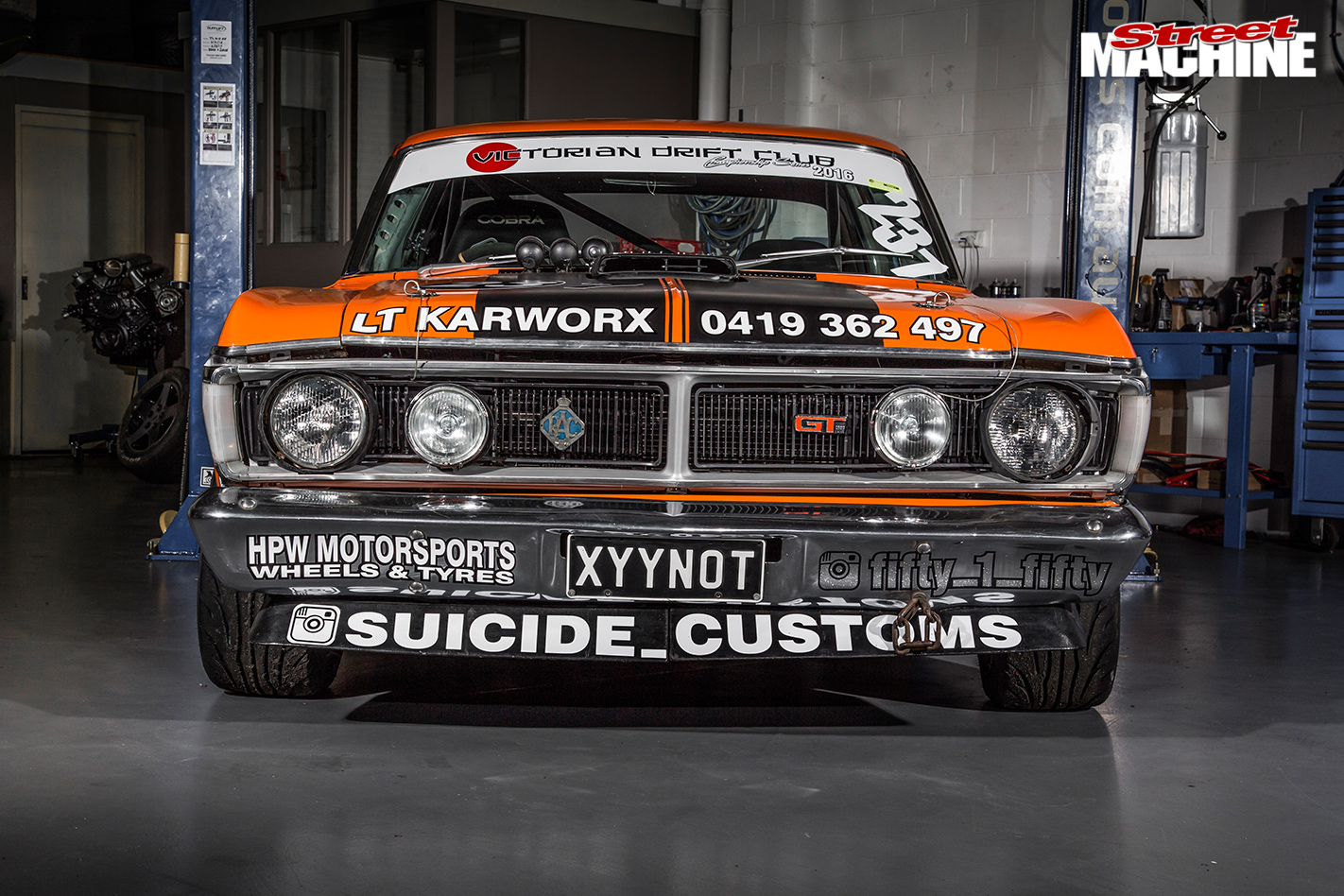 After a recent VicDrift five-car train saw him become the meat in a drifters’ sandwich, James decided to give the XY a new Allan Moffat-inspired retro look. After some repairs, the Raw Orange two-pack was laid down by Jade Sharp at Suicide Customs – James’s go-to shop for patching up all his battle scars. Mick Chizz from Fifty One Fifty designed the new concept with racing decals and classic-looking stripes. If you look closely you’ll see the iconic 351 decals actually say 346, and the Super Roo has hopped away – a subtle hint that there’s no longer Ford power shaking this machine!

It was unveiled at Round 3 of this year’s VicDrift season, and was a massive hit. 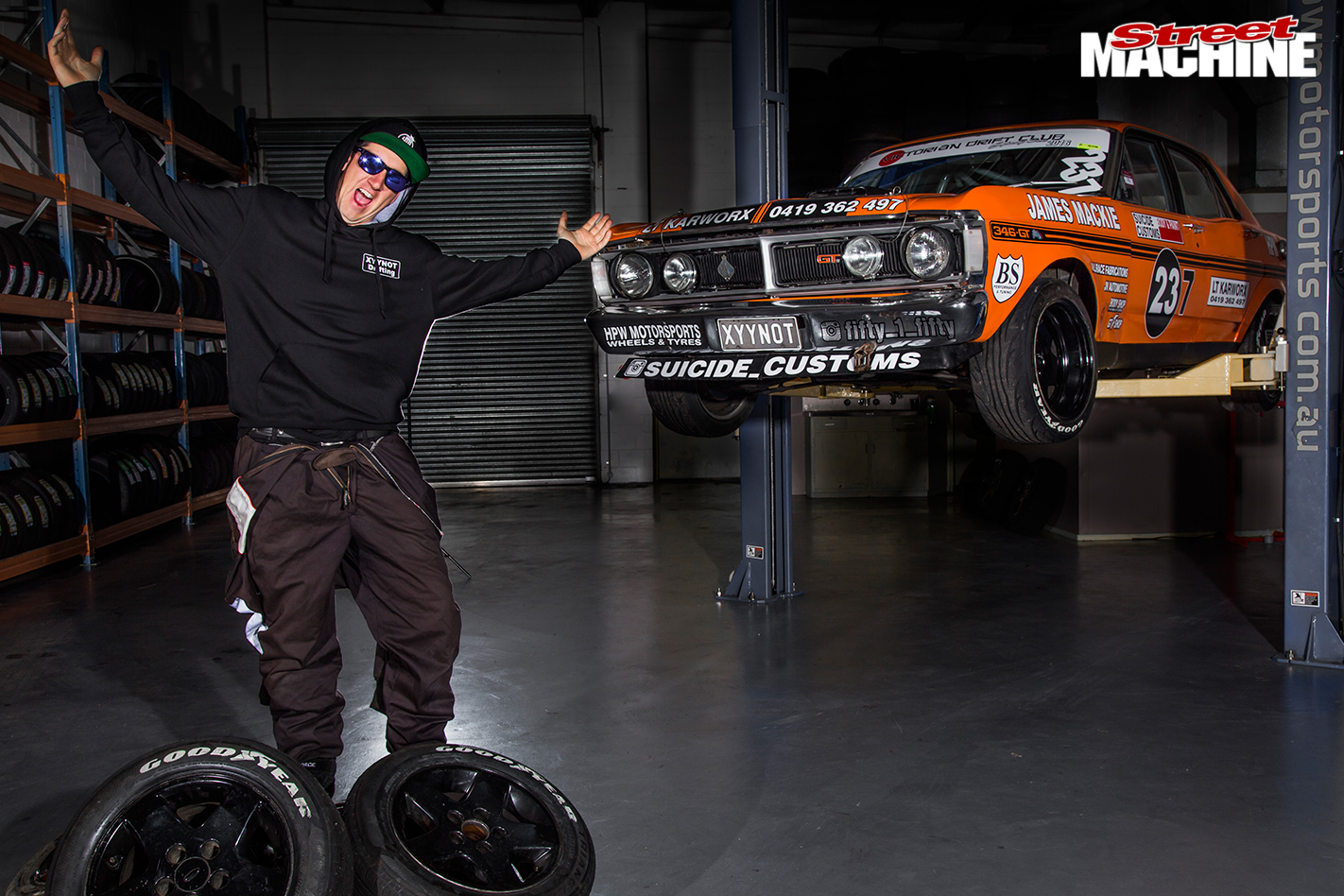 If all goes well, James hopes to one day ramp up the killer wasps being fed to the rear of the Falcon by getting his mitts on a NASCAR motor. Seeing a Blue Oval classic sliding and smoking through a turn, only millimetres away from another drifter, is crazy enough as it is; just imagine it revving at 9000rpm thanks to some race-bred Yankee muscle!