IT ALL started in ’05 with a less-than-ordinary six-banger XY Falcon 500, running and regoed but devoid of glass and other important parts. “I always had the passion to do a ground-up rebuild on an XY,” says Simon. He gave himself a $20,000 budget, including a mild-Clevo upgrade, then got to work. 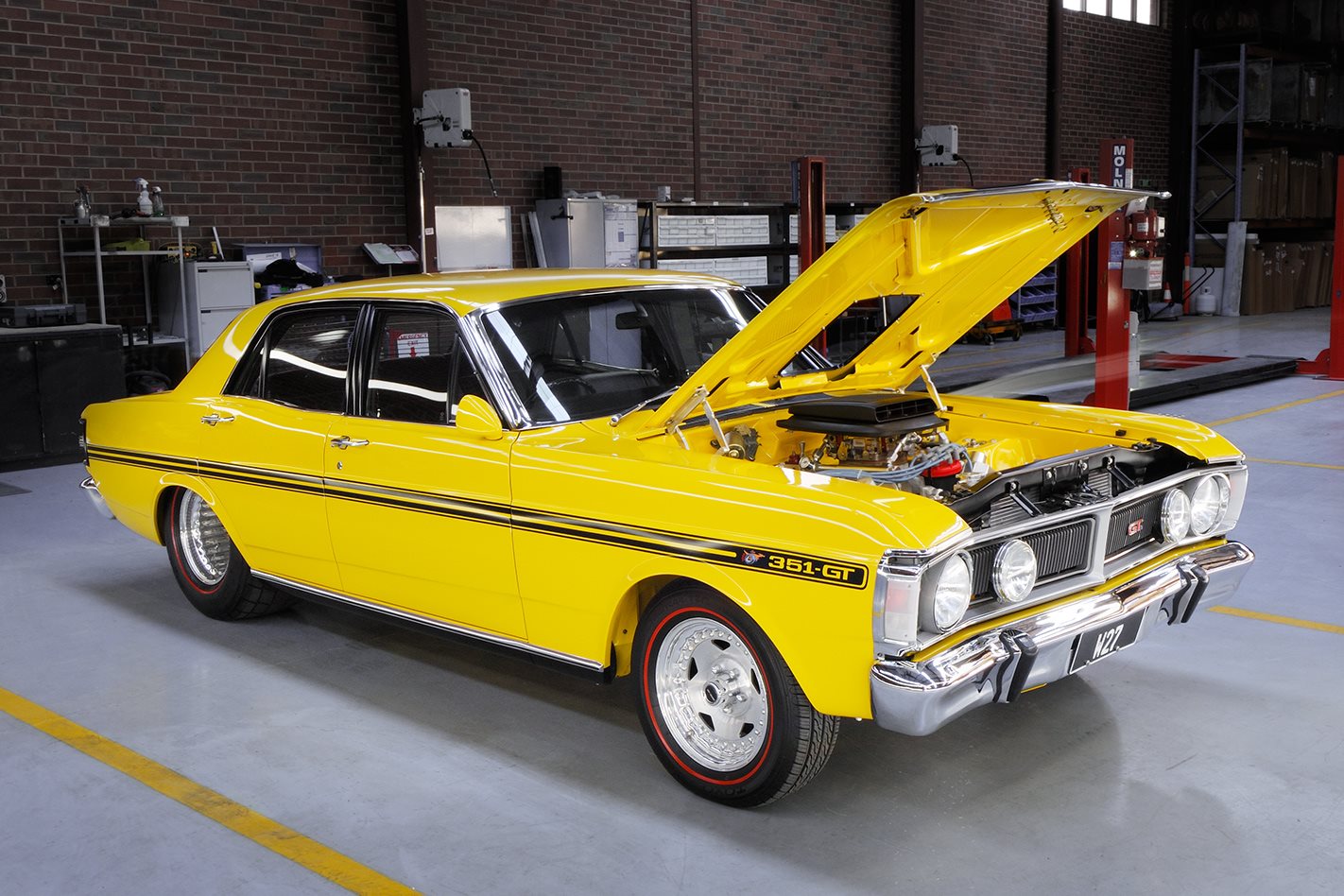 The Falcon was soon in its undies and paint-stripped in the backyard, before being shipped to Carmen and Dino at CDS for a set of tubs, bringing with it the first of many on-the-run changes of heart that characterised the build and which continually upped the ante. You see, Simon rocked up to CDS wanting tubs to suit 10-inch wide rims, yet left with room for 12-inch widies, a four-link and a braced nine-inch! 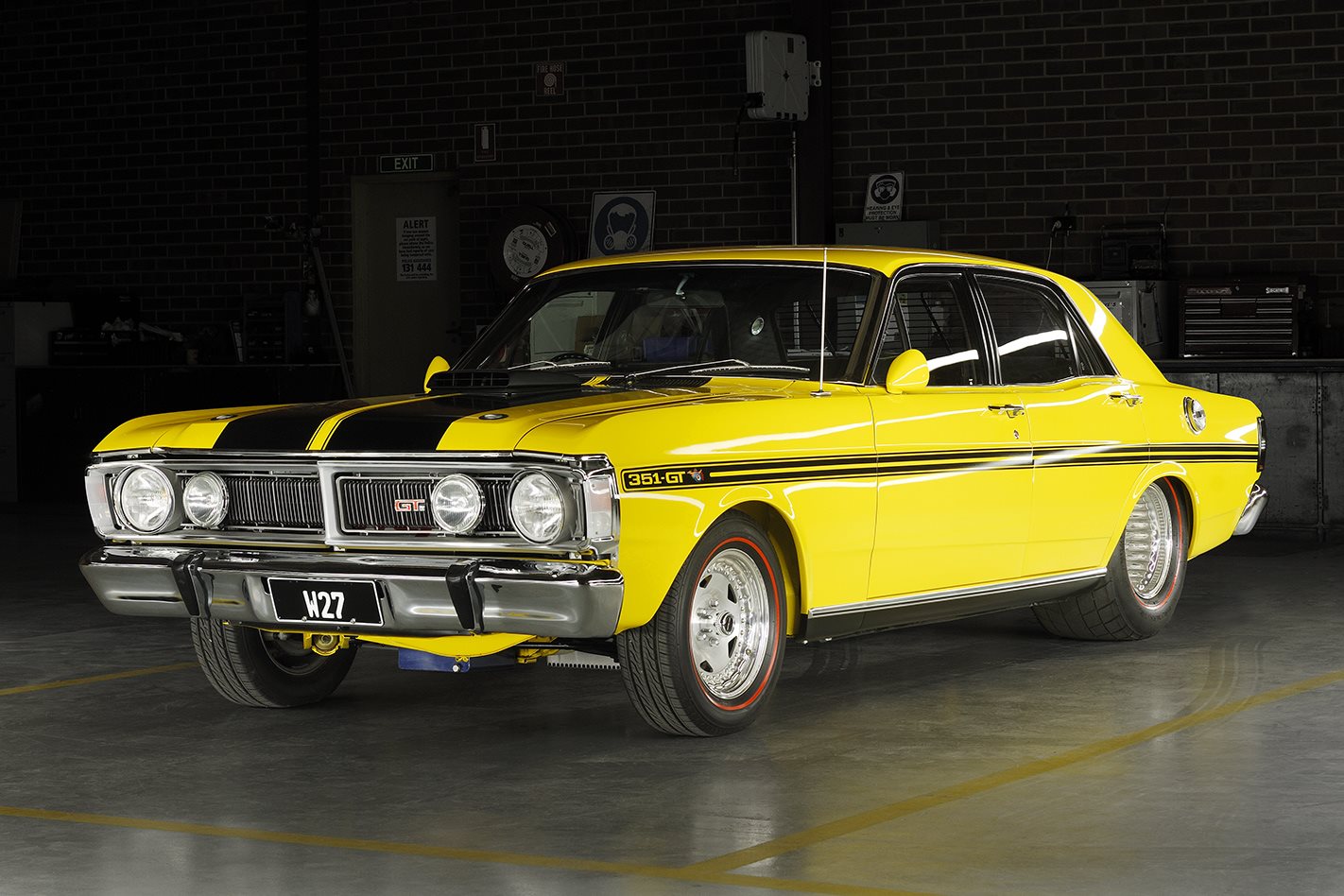 Simon added chassis connectors from the four-link forward to the front rails, before trimming and strengthening the suspension towers while attempting to retain the original look. No matter that he would later develop a new coil-over set up, his initial motivation was simply to make it a bit easier to change the plugs in the planned 351ci Cleveland V8. But that was not to be either, the Clevo making way for a nasty 347ci V8 Supercar-based small-block, said to be good for 750hp. Anyone starting to see a pattern here?

At this point, Simon sourced a bunch of new replacement panels before the shell was trailered to Scott at Kustom Bodyworks for metal finishing. Travis at Warehouse 27 then iced the now straighter-than-showroom XY in Yellow Glow. 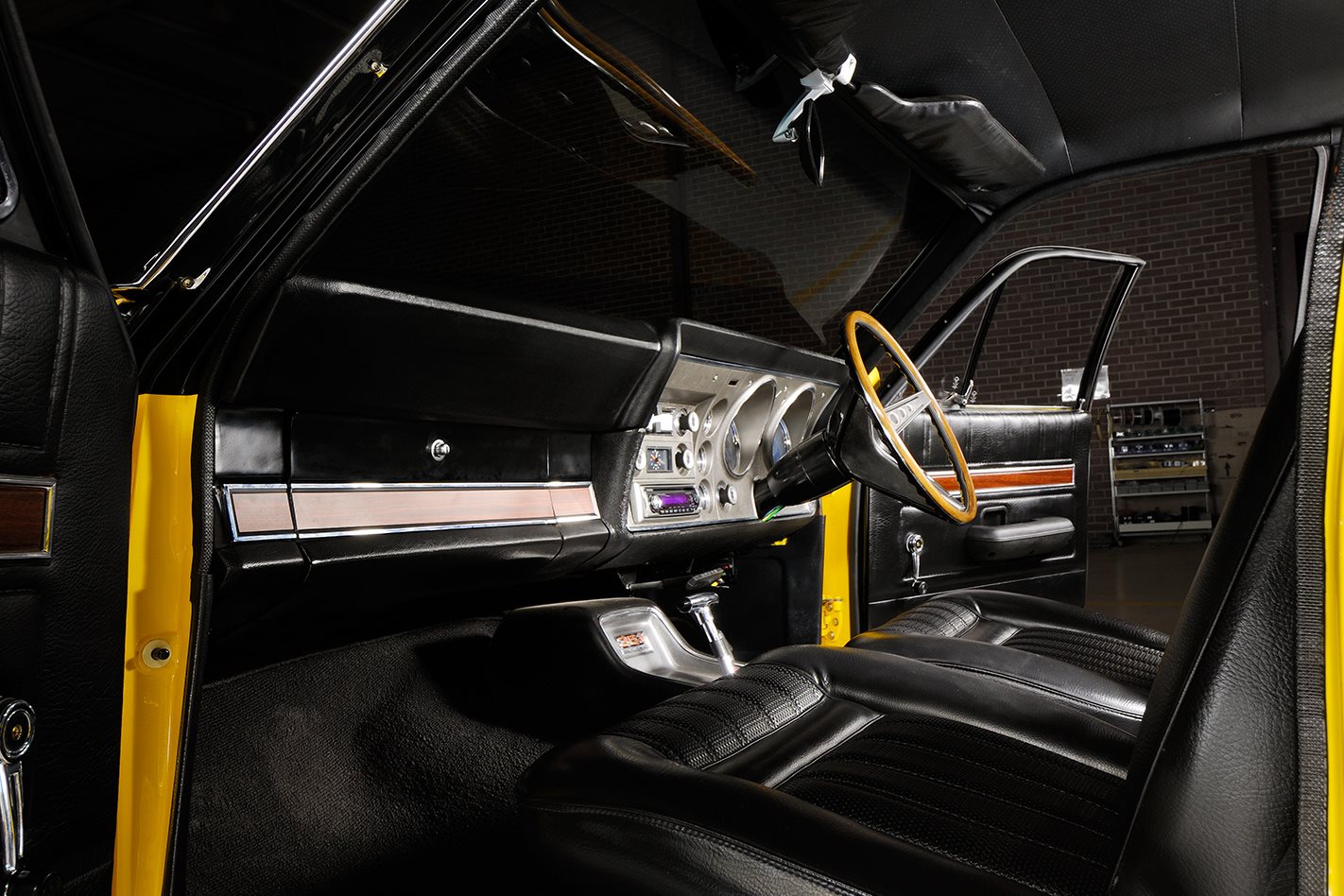 In keeping with the GT replica theme, the retrimmed black-on-black cockpit has all the traditional styling cues. “I wanted it to look stock, no B&M shifter or Auto Meter gauges,” Simon explains, with all the go-fast bits squirreled away in the glove box.

The ballistic driveline however is anything but stock; even the wild 347 race motor never got to fire a shot in anger. Instead, with the Falcon 90 per cent complete, Simon took a quick break in the US and came home with a big dose of big-block fever. 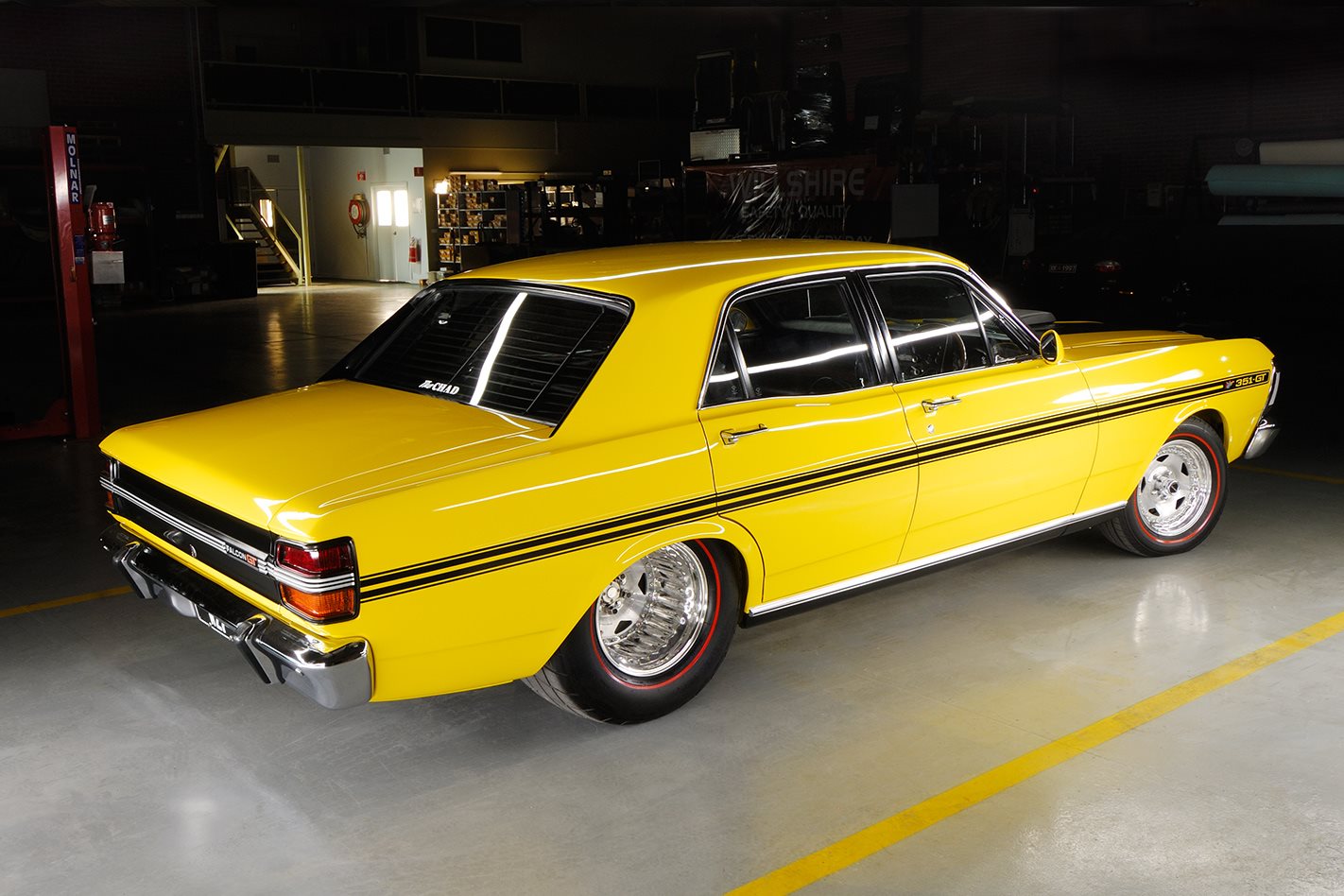 “At the drags over there, bigger is better,” Simon says, “with Jon Kaase Race Engines everywhere. So I ripped out the small-block and sold it off. There’s no substitute for cubes!”

“I emailed them and within four weeks they bolted together a 598ci (9.8-litre) combo and had it on the ship. They were awesome to deal with. 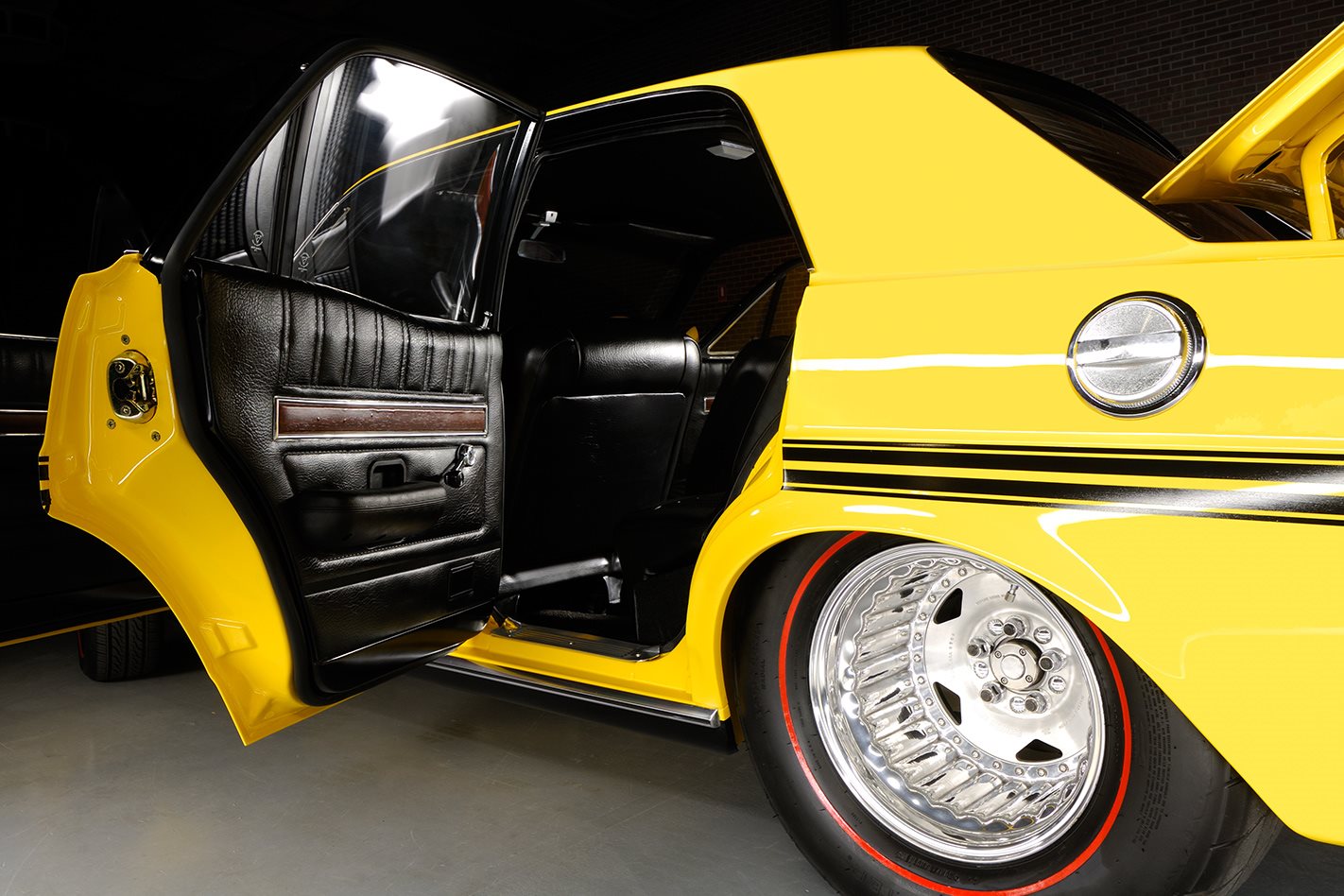 The dyno footage was emailed through showing 937hp aspirated.”

Diamond pistons with Oliver rods and a Bryant crank take bottom end duties. Lubricating oil is fed by a Kaase pump from a Moroso sump. 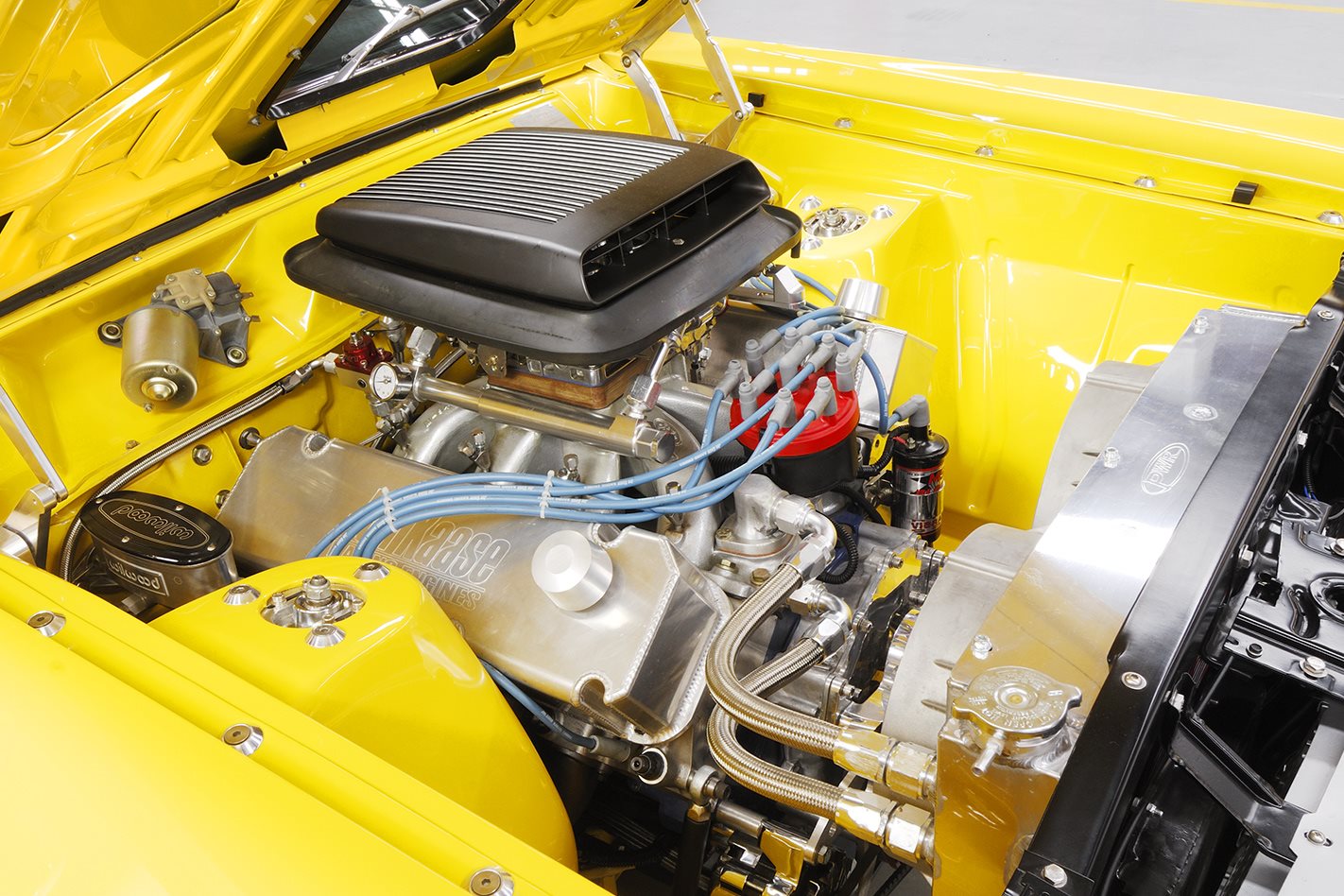 Just shy of 10 litres, the US-built Jon Kaase mill has pulled well over 900hp aspirated on an engine dyno

A colossal transmission was required to rein in all those stampeding ponies. US-based Hughes Performance came good with a full manual, reverse-pattern C6 and transbrake. The nine-inch rear features a Strange Ultra case with 4:11 Pro Gears, rated to 1200hp.

Only one problem remained, how to shoehorn an engine the size of Georgia into the compact engine bay of an already painted and ready-to-show Falcon. 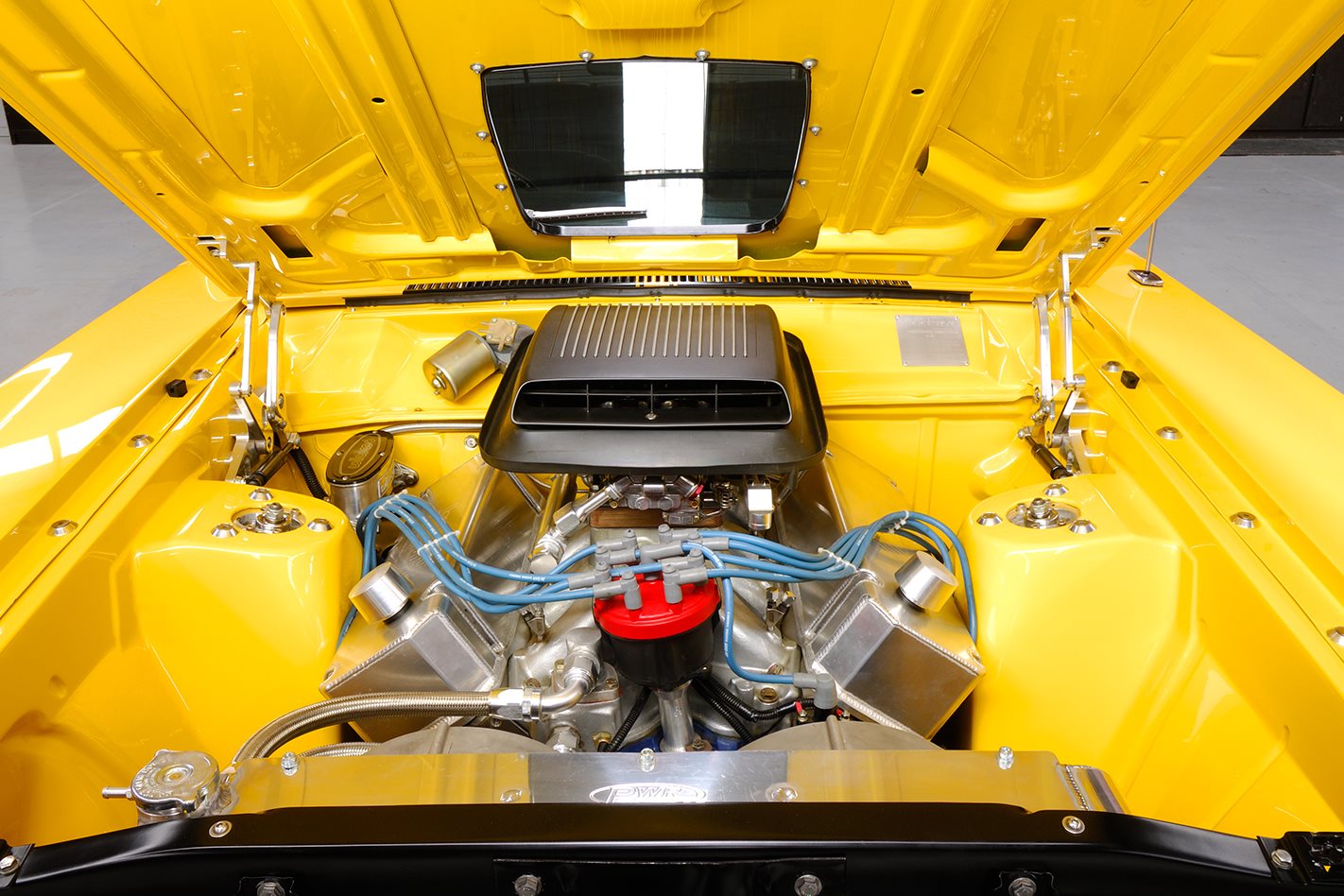 A wreck was used as a dummy ’bay, allowing Simon to create custom engine mounts to keep it all under the bonnet. And he achieved a great fit – minus the headers! Their fitment was the trickiest task. Damon Aire had the XY for five and a half months. Careful to not harm the duco, he created 2¼in custom headers through to a twin 3in stainless exhaust. Simon says, “He’s done a fantastic job, though he was pulling his hair out!”

Throughout the build, Simon’s mates were a constant thread, lending a skilled hand or tools or just coming together to discuss progress at regular Friday night shed drinks. With the finish line in sight, the blokes aimed at Jaf’s Cruise in December 2012 to debut the much-modified XY. 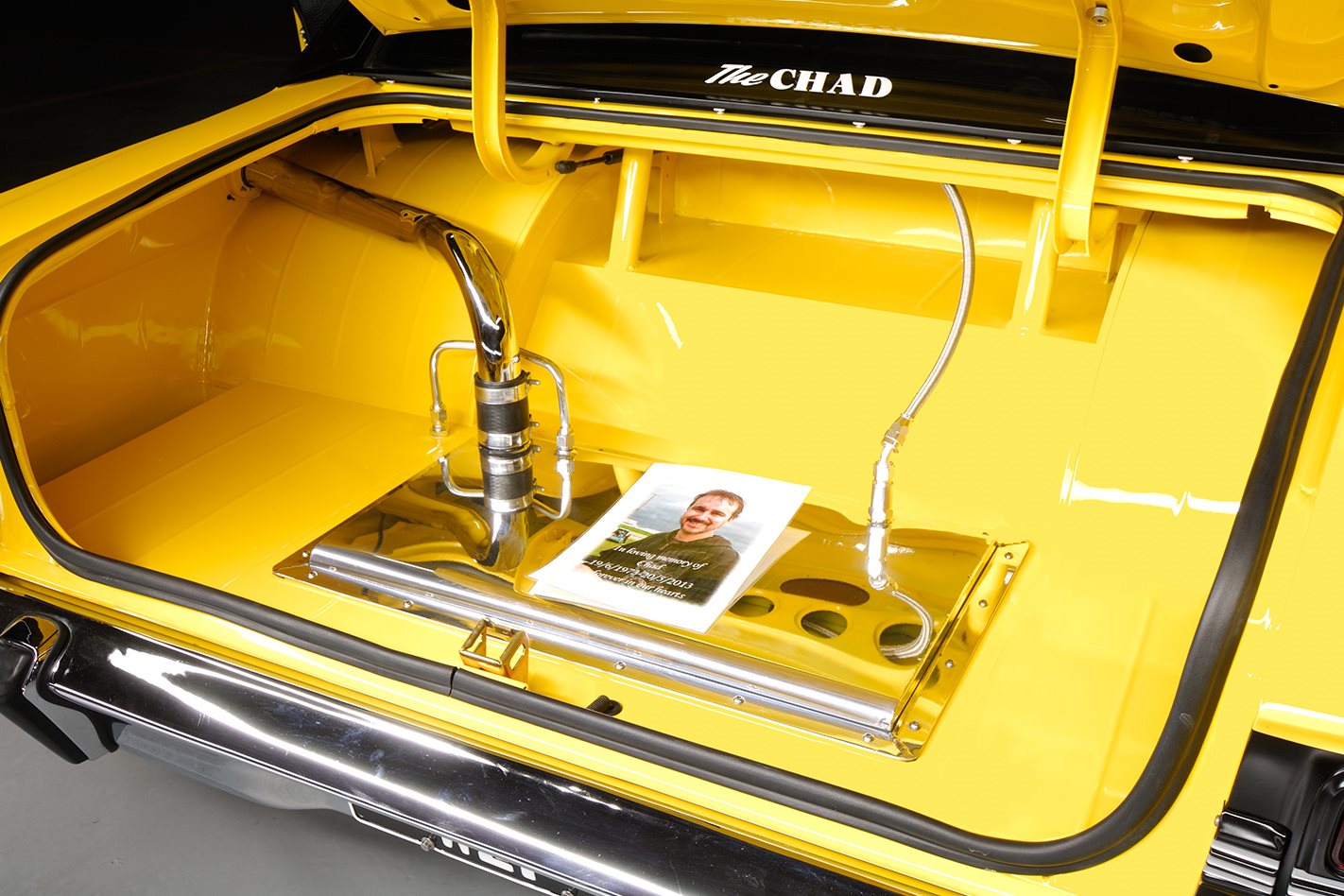 Simon’s mate Chad, himself the owner of a well-known XW GT replica, had a big hand in building the car. Sadly, he was killed in a car accident before the XY was completed. Their many friends banded together to finish the car for Adelaide’s Extreme Auto Expo, where it won a swag of trophies

“The night before the cruise, my mates Chad, Pete and I wired up the car. At 11.58pm we fired her up, but she leaked everywhere,” says Simon. The XY never made the cruise.

“Chad helped me every step of the way. He was there for the fire-up and for a few rides yet the car wasn’t to where we wanted it,” Simon explains, determined to complete the XY to the point that he and Chad had envisioned. 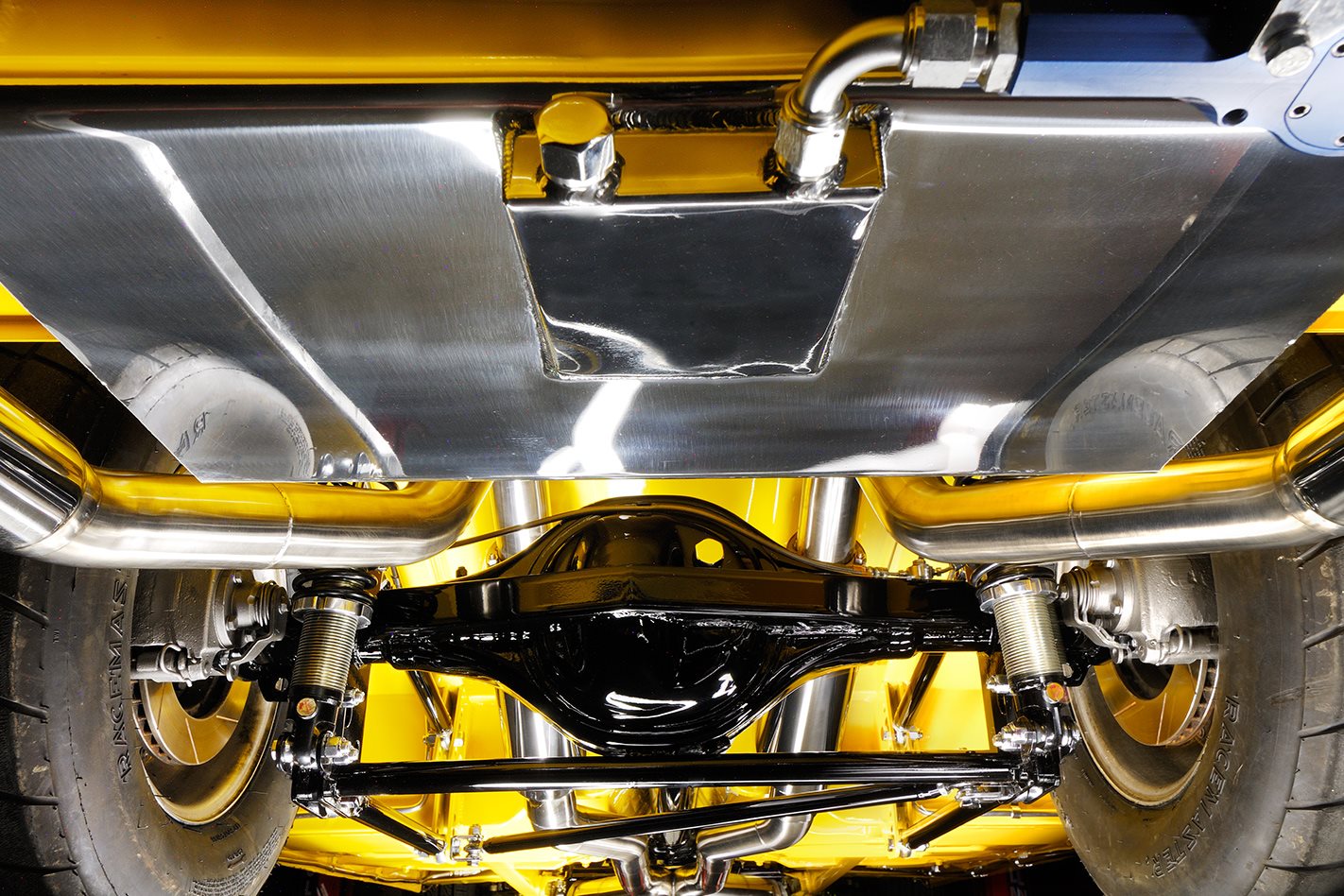 Chad had a XW GT replica of his own, in silver with an orange stripe sporting satin Center Line Auto Drags. He was a regular on Adelaide’s healthy cruise scene.

“Chad was my main motivator. We’d sit in the shed discussing the build and end up half cut, but wouldn’t touch the car until we’d sobered up. He helped me put the whole car together, night and day. He just loved it.

“Thanks for all your help, mate. Wish you were here to enjoy it.” 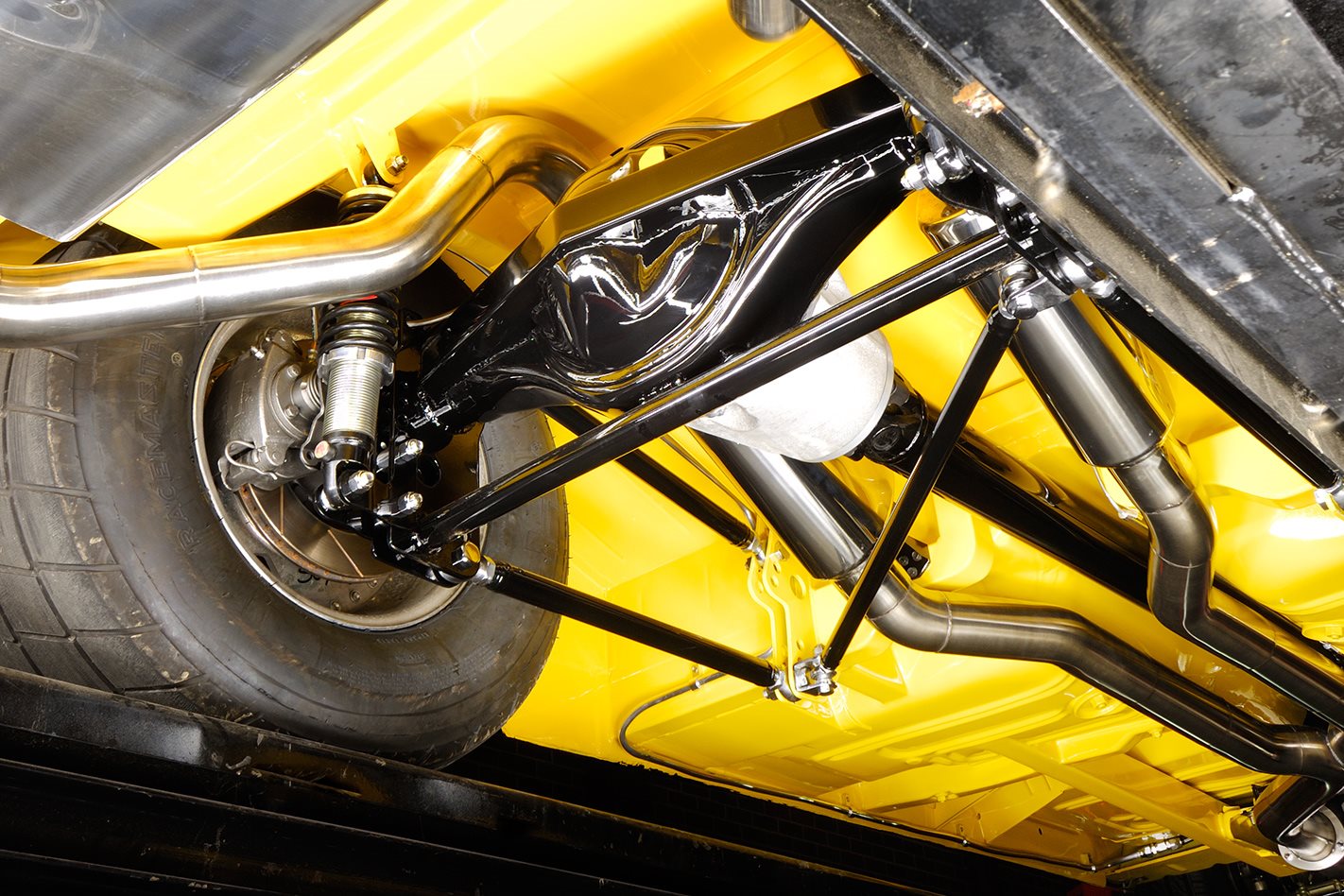 How clean is that rear end? Carmen and Dino from CDS fabricated the tubs, four-link and braced nine-inch diff

So Simon, his friends and family pushed for Extreme Auto Expo in October 2013 to debut the car, not completing the yellow beast until early in the morning before the show opened. 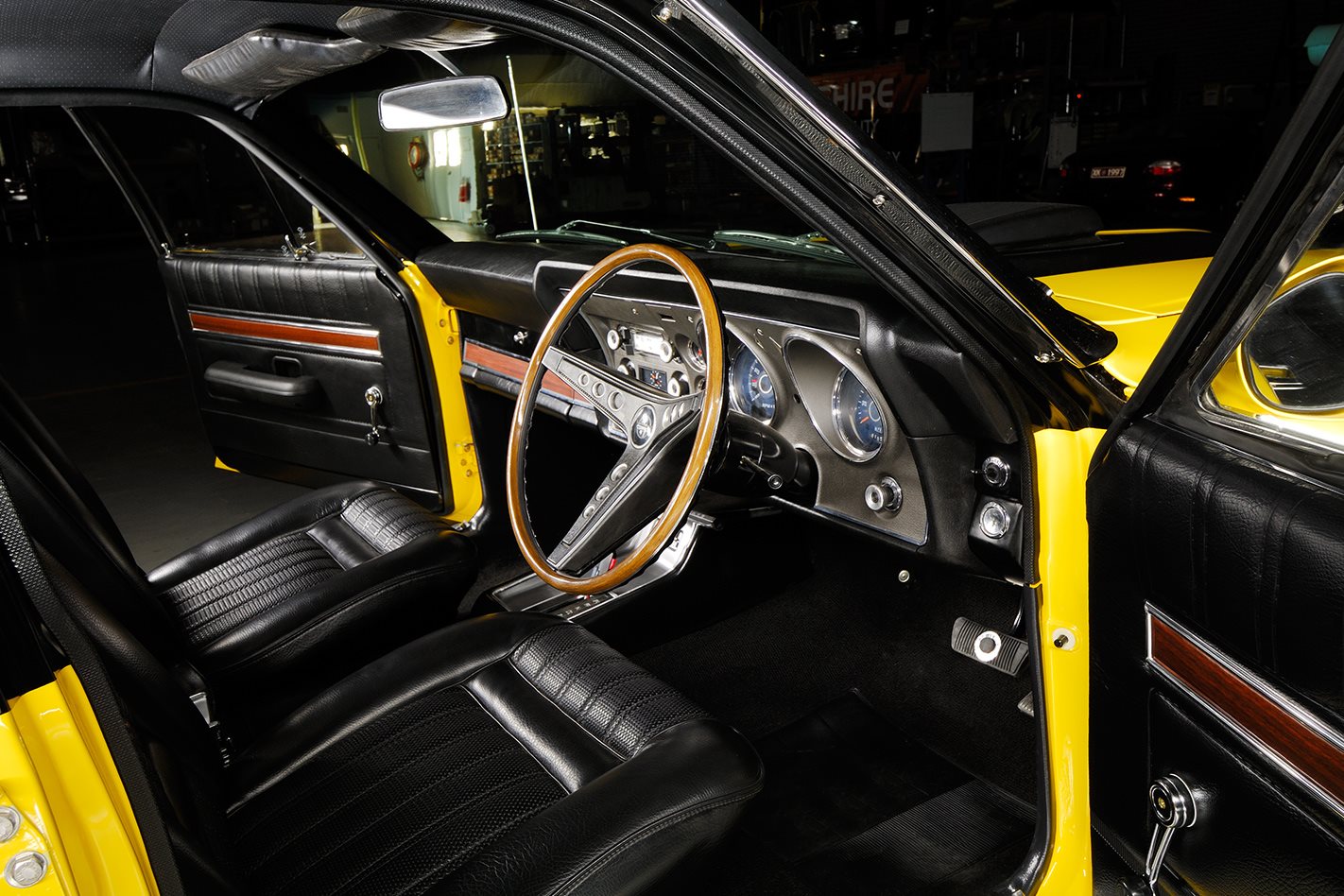 Soon the XY will go for rego.

“The idea is to get it on the road and get it all legit.” Until then Simon will continue to show it with longer term plans to whack on a pair of slicks and aim for a nine. As we go to press, Simon and his crew have Summernats 27 in their sights, along with a Top 60 birth and some well-earned beers.