DRIVE to the track, run a quick number, then drive home again. It’s the goal of many, but with a best of 7.84@177mph, along with several other solid seven-second passes, few have achieved it so emphatically as Bobi Mircevski and his gorgeous black Falcon, 1BADXY.

“I absolutely love the fact I have a seven-second car that I can put my family in and cruise like a regular car,” Bobi says. “We cruise it everywhere – in 35-degree heat, in the rain! My wife Lydia and daughters Emily and Mia love going cruising in it just as much as I do. Lydia even drives it!”

To further reinforce 1BADXY’s street cred, it retains all the factory glass, has a full interior, a stereo system and is all-steel except for the cowl extension atop the factory steel bonnet. “We’ve made no attempt to lighten this car,” Bobi says. “It weighs 4230lb (1919kg) with me in it!

After a year-long search for a suitable donor car, Bobi’s wife Lydia eventually found a near-mint, six-cylinder car on the internet, located just 20 minutes down the road. “Absolutely everything has been restored in this car,” Bobi says. “I wanted everything to be perfect”

But getting this XY into the sevens while still being a comfortable cruiser hasn’t all been smooth sailing – more a 13-year odyssey. Starting with a six-cylinder survivor, Bobi’s initial goal was to build a tough GT tribute. “It was virtually finished; all it needed was an engine,” he says. “Then I saw Paul Todarello’s twin-turbo LX hatch at MotorEx [SM, Jul ’14]. It blew me away and convinced me to change direction. I came home, sold off thousands of dollars’ worth of GT interior and replaced it with a full-custom interior, then sanded back thousands of dollars’ worth of chrome plating to paint it all black.”

That mile-deep, black-on-black paintwork and super-slick body is the handiwork of Unique Body Smash Repairs, while the custom interior was stitched by Instyle Custom Trim. It’s not every day you see a seven-second car sporting a plush leather interior complete with four genuine ESP buckets and a thumping audio system. But as Bobi swears, 1BADXY is a street car that runs quick – not a thinly veiled race car.

The build’s change in direction also included the engine, which went from ferocious naturally aspirated to fearsome turbo EFI. “I saw what the Dandy Engines boys were doing at the track,” Bobi says. “I realised my N/A plans were not going to cut it – going turbo was the answer. My business partner Bill, who supported me through the build, and I went to see Lou and Frank at Dandy. We clicked instantly – I can’t speak highly enough of what they’ve done for me.”

The Bosch Motorsport 044 pump feeds the red Waterman mechanical fuel pump – which is cabledriven off of the back of the belt-driven Peterson oil pump mounted up front. M/T ET 275X Street Radial Pros are vital in achieving those 7sec timeslips

After everything was pieced together and Nads at FuelTech sorted the tune, the car pumped out 1520hp at 34psi on a hub dyno. On Roo16, Frank figures it’s making around 1700-1800hp at the flywheel. In street trim and on 98 PULP, the boost is wound down to 17psi, but it’ll still run a high eight.

Although good for 1800hp, the force-fed 400ci Windsor was built on a budget using as many parts as possible from the original N/A combo Bobi had already started piecing together. 1BADXY is a street car first, race car second, so it was important the engine wasn’t too laggy – hence the decision to go with a single 94mm Precision turbo rather than twin 88s like the Dandy XW has

“The block, heads and intake is not a combo we’d typically use,” Frank from Dandy says. “However, when Bobi came to us, he already had a lot of parts. We wanted to do the right thing by the guy, so we used as much as we could. Besides, with 20 years’ experience building small-block Fords, we were confident we could make the power.”

To control boost, the Falcon relies on a CO2-controlled blow-off valve. Running it off the boot-mounted bottle of compressed CO2 – instead of referencing it to boost pressure – enabled Frank and Nads to create a very accurate boost map. “This way, we can come off the line at only 4-5lb of boost, before ramping it up however we want,” Frank says.

“It gives us very precise control, as it doesn’t matter how fast or slow the turbo’s spinning.”

With its massively kicked-out side and 13-litre capacity, the Stef’s Fabrication Specialities aluminium sump is one burly bit of gear. Somewhat less so is the Plazmaman intercooler; painted stealth black and shorter than the Race radiator, it sits quite incognito in the nose of this brutal XY.

“Being a 4000lb car, the tune is critical,” Frank says. “Miss it in a car this heavy and you’ll burn a piston quicker than you can say: ‘Fugg.’ That’s the beauty of the FuelTech system; the closed-loop O2 sensors work so fast, if I miss a couple of numbers in the table, it will catch and correct it.”

Mark and Nick from Lauria Motorsport (LMS) have played a big part in 1BADXY. As well as looking after the driveline, LMS fabricated the sturdy diff along with a ton of custom stainless work. One of their toughest tasks was adding the six-point ’cage and tubbing the rear of the already painted shell, without one bit of damage.

The Racepak dash looks right at home next to the double-DIN head unit in the fabricated dash fascia. Wiper and light switches are now push buttons in the console, and there’s even gear indicator lights!

All the engine bay additions and cutting to accommodate the monster turbo set-up were also completed post-paint. “The engine bay had to be all masked up,” says Bobi. “Nothing was hit, nothing got damaged.”

The LMS exhaust starts with a four-inch dump-pipe feeding into a twin 3.5-inch system with 3.0-inch pipes over the diff.

LMS always gives the Falcon the once-over before a race meet, and Mark is always at the track lending invaluable assistance. This ballistic Falcon competes in the X275 Radial class, and to help get all that power through the relatively narrow tyre, LMS converted the rear to mono-leaf, built a custom set of CalTracs, plus added coil-overs and a massive sway-bar. All of which works pretty darn well, you’d have to say.

By Bobi’s own admission, the build took a long time. However, the build has given him a lot of quality time with his mates, and he’s also made a host of new friends along the way – including through racing. What more could you ask for? Oh yes, that’s right: a 7.50 timeslip! 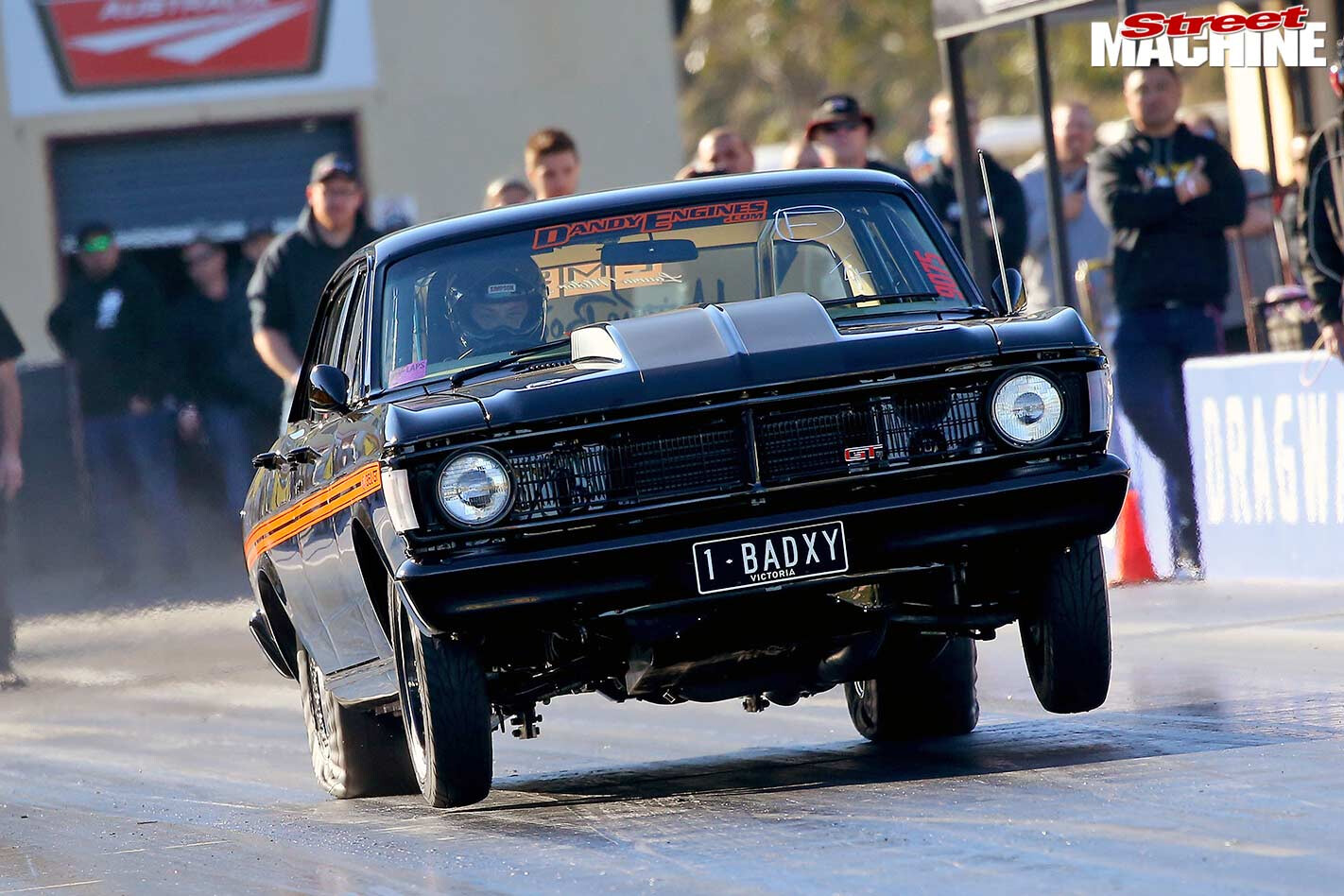